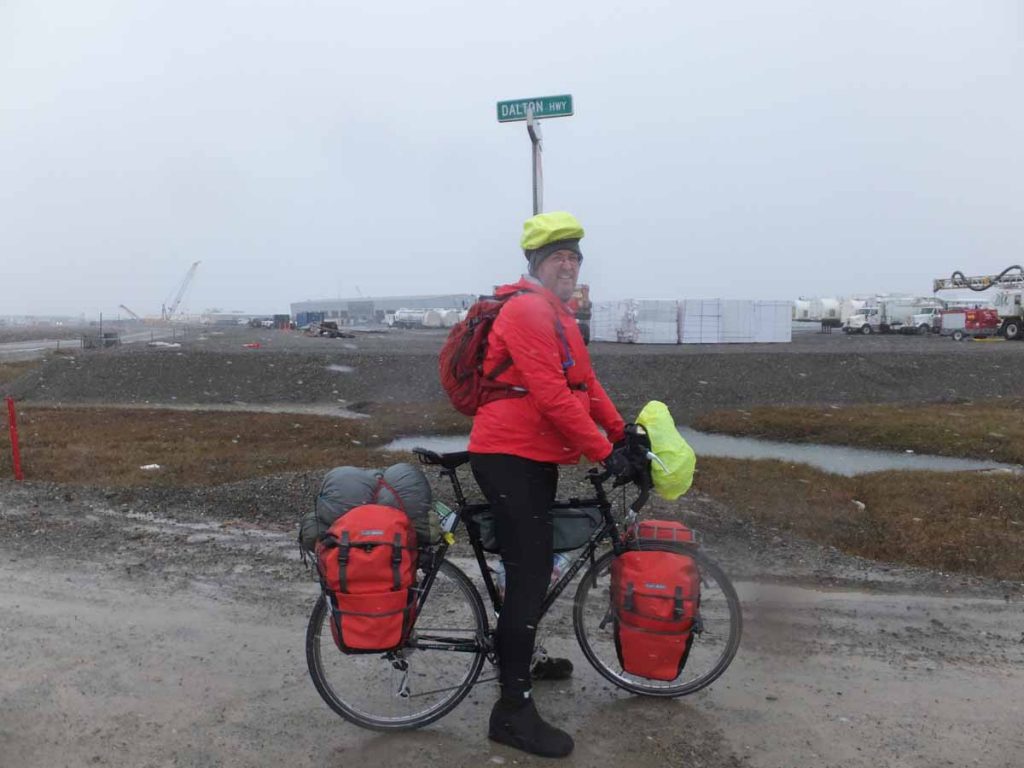 Above is my official starting photo on edge of the Dalton Highway in Prudhoe Bay.

Our weather forecast had said a brief but intense storm was going to drop 0.25″ of rain followed by 1″ of snow. Rain would start around midnight and worst of the storm by 10am and chances less than 50% after two pm. With that in mind, myself and Dhruv from India agreed to check at 7am and if still looked ok, depart around 10am. By 10am, it was still snowing and turns out the forecast was wrong as it continued until well into the night. 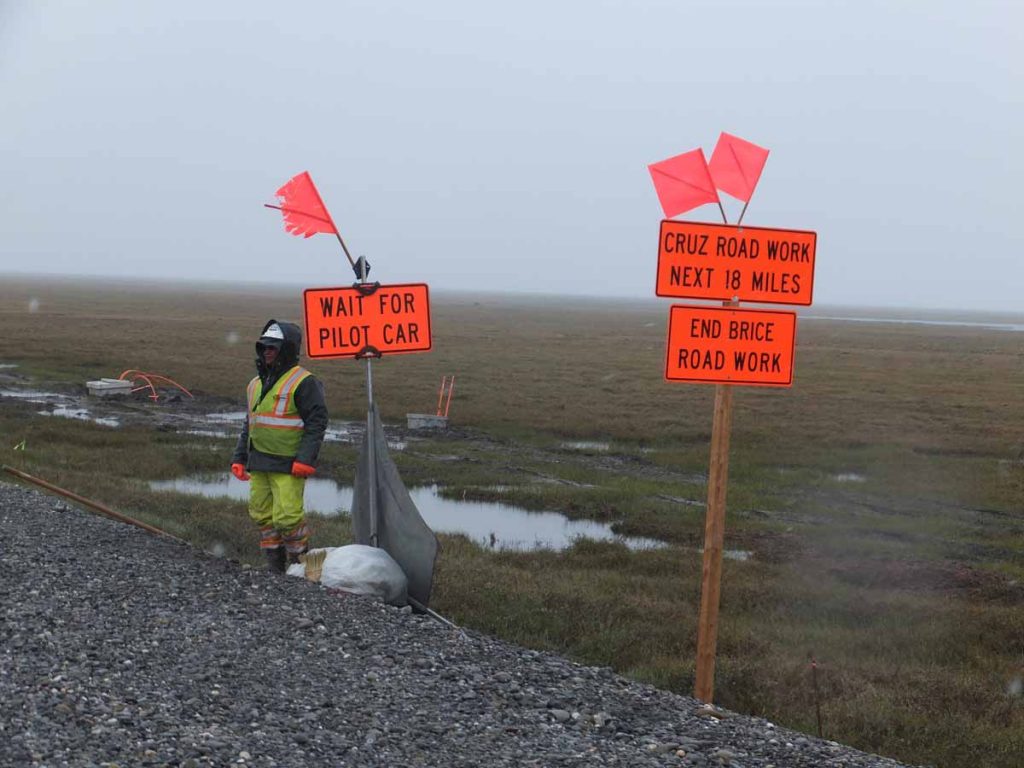 I was slow but turns out Dhruv was cycling a bit slower. I stopped to wait a few times, but at some point also agreed that we would continue and try for the likely target at mile 455 (60 miles down the road). My odometer today was in km and at 23km I came to the first road construction. They explained to me that I had two choices: load the bike in the pilot car or wait until shift change at 6pm. It was cold, the road would be soft and I was in no position to argue, so waited for the pilot car and rode across this 4 mile segment. It was followed by a second 8 mile segment, but unfortunately they weren’t coordinated, so ended up waiting for quite a while until the car came. 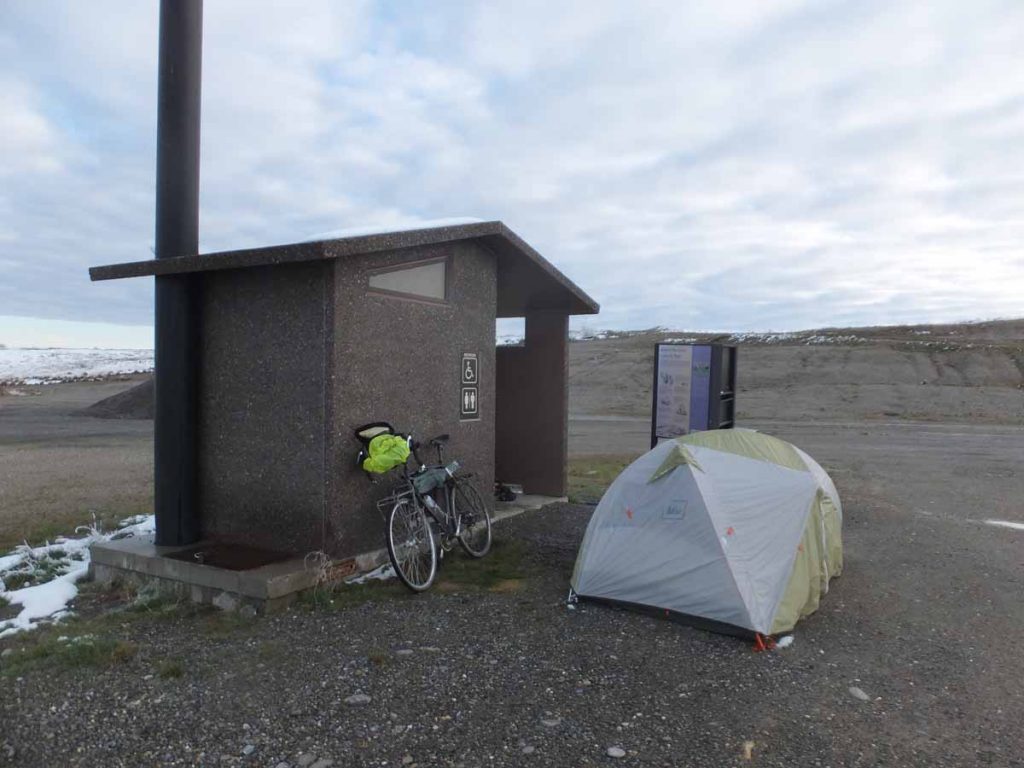 It was good cycling past the construction, but it continued to get feel colder. By 90km there was a brief period of pavement but also some climbing. The snow was starting to stick to side of my pannier. I saw two tents and bicycles besides the road. I didn’t know it then, but these turned out to be two cyclists from Sweden. Finally as I got closer to top of hill, I found my destination, this pit toilet. The door was welded shut but it gave me a place to shelter from wind and pitch my tent.

It was tough since I was quite cold. I couldn’t get the drawstring from my tent undone. Finally got out a knife and cut the drawstring. Got myself into the tent, put over the sleeping bag and shivered for a while. I hadn’t eaten much, so figured I would need to get some food in me. Got the stove lit and boiled some water for a freeze dried package. It was ok, but still feeling hungry, I put two packages of oatmeal in the mostly empty bag and got some oatmeal as well. Suddenly felt sick and threw up. Oops there went dinner. Got myself as best I could and collapsed in the tent. Still cold but ok. 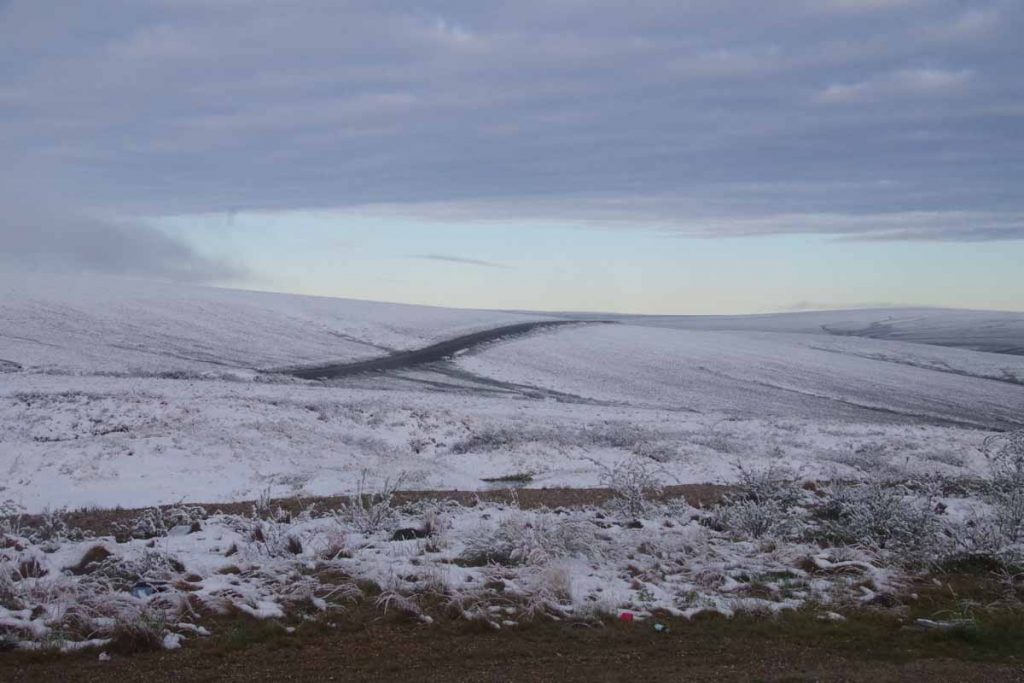 Woke up to pretty sight overnight. The snow had stopped and it was a white world. The road continued with a few more climbs and descents today and it was warmer. Just having the sun out helped a lot as well. Dawdled around camp including filtering some water before setting off around 7:30am. Pow! My rear tire suddenly went flat. Not sure what happened but the valve stem was broken off just past the lock nut. Oh well, start the day by replacing the tube and then going again. Fortunately, I had three spare inner tubes with me.

Dhruv hadn’t shown up the previous evening, but learned later he had camped in the snow next to the Swedish cyclists. It took me about three hours to finish the first 20 miles and come past “Happy Valley”. I didn’t see them yet, but three Swiss cyclists had camped there and they came by later in the afternoon. 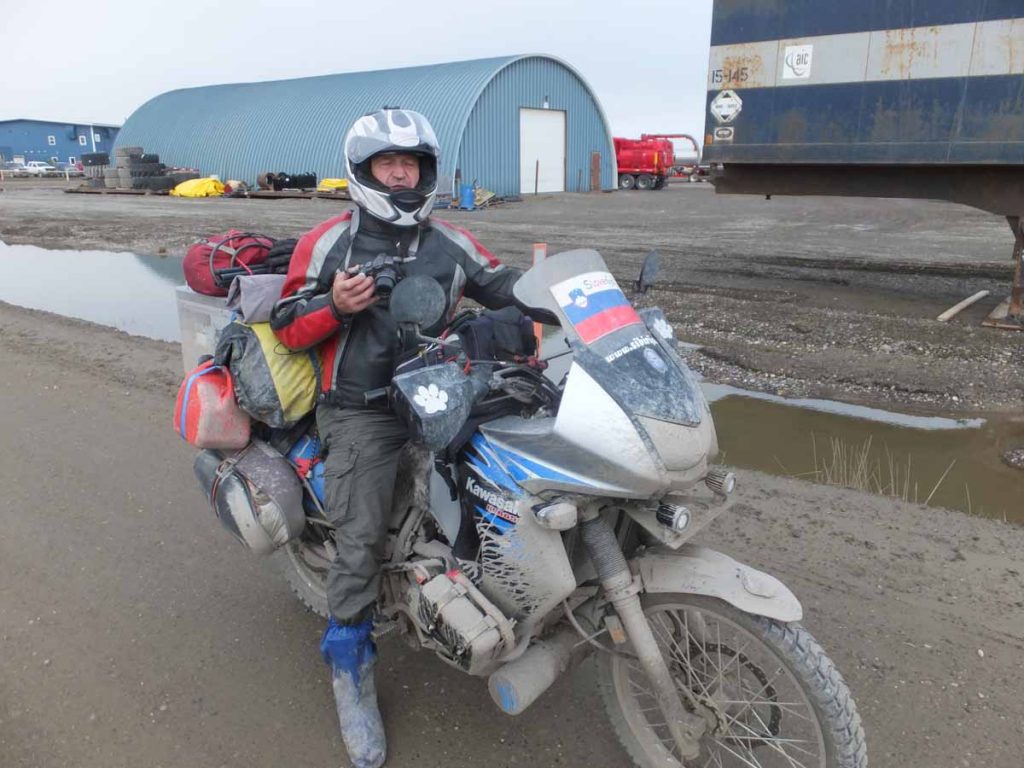 One of the ways we learned about each other was from others on the road including motorcyclists. There were a fair number of them usually decked out with complete gear such as this guy from Slovenia. They would be pretty polite in slowing past and sometimes even stopping and checking on us. As a result, we could also figure out where others were on the road by asking motorcyclists. 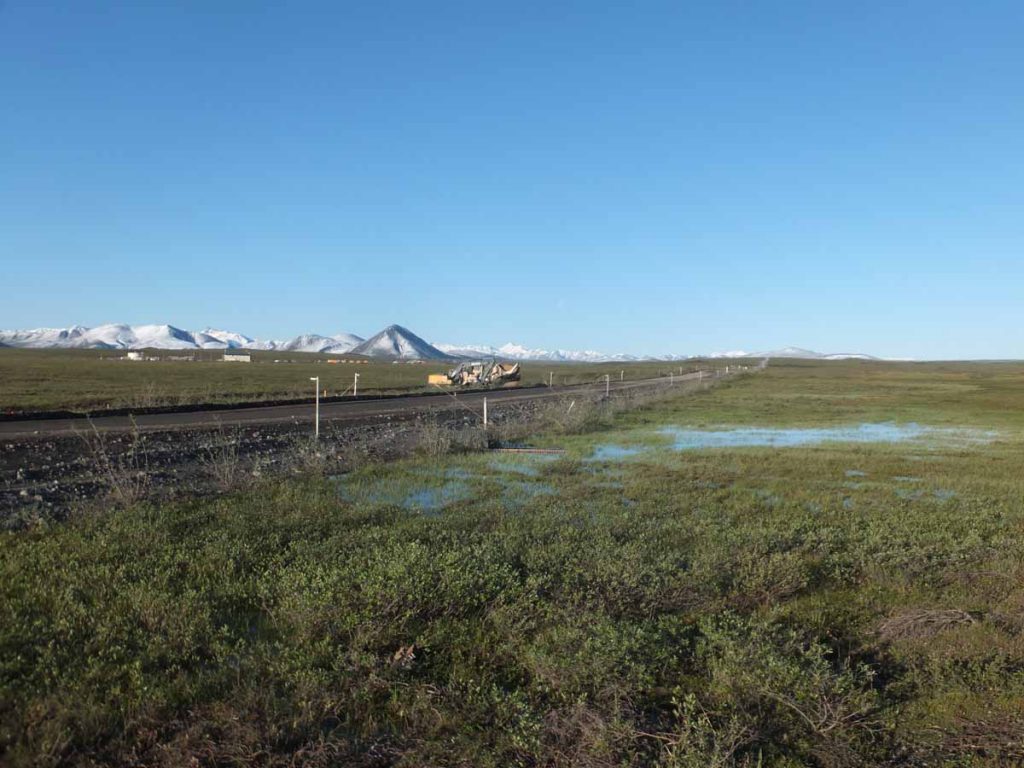 The day had more hills but nothing too bad. It took me almost 10 hours on the road to cover 48 miles and end up at mile marker 307. There were crews busy here dredging for fiber-optic cable. Apparently, plan is to put in cable first to Deadhorse and eventually even over and across the Bering Strait. I’m sure it will be a while. Campsite wasn’t too bad and later in the evening the Swedish cyclists came back and we compared notes Dhruv started with them but was overnight in Happy Valley. 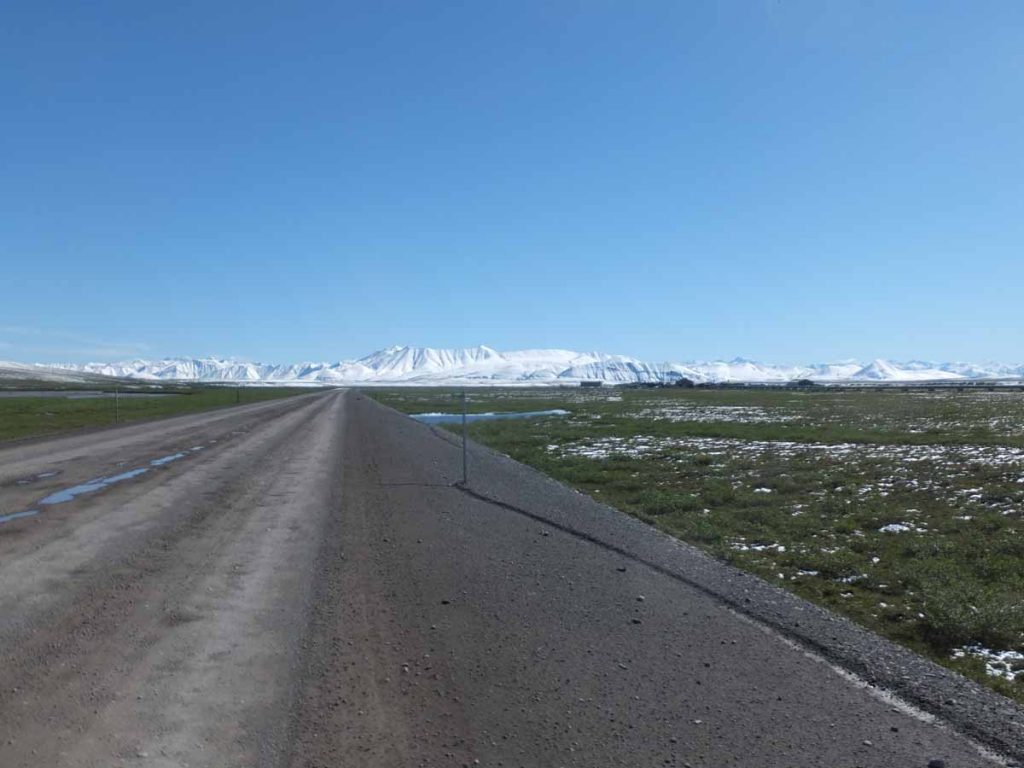 Third day started with some good climbing, first out of the Sag River drainage and then over several other drainages to the Toolik River and eventually to the Atigun. It was another 10 hours on the road to get another 48 miles further. However, the scenery became much more dramatic as the Brooks Range came into view.

I had several instances of road kindness on this day including a truck driver that slowed, asked if I was ok, and then reached in to hand a granola bar and also a bottled water. Thanks! I also had a pleasant conversation with motorcyclist from Wisconsin who had ridden all the way there and was really enjoying getting out.

I also had a bit of a surprise at one point when noticed my toe plus pedal wasn’t attached to the bike. Apparently, the pedal had come apart and the spindle was separated. However, I was able to stick it together and it lasted the rest of the way. 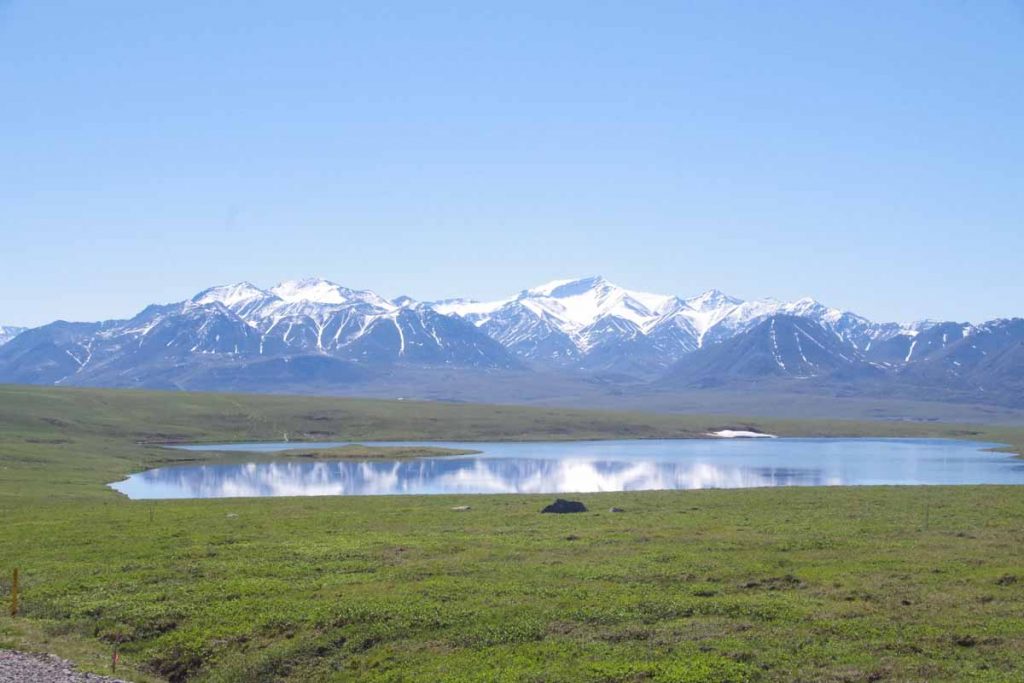 Photo above is Island Lake. 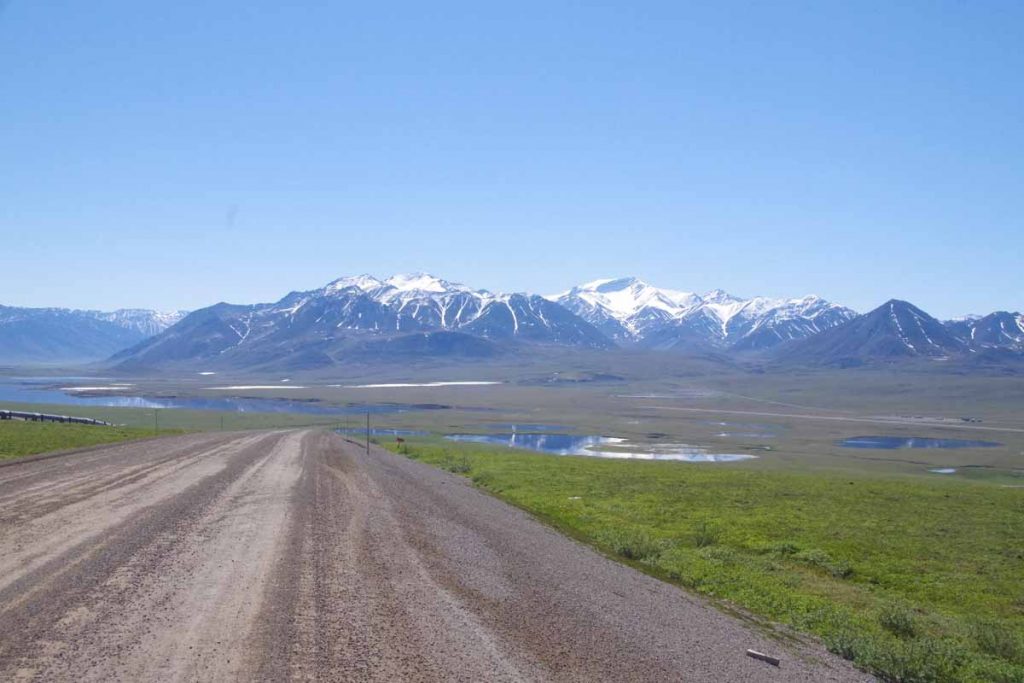 Photo above is Galbraith Lake. Surprising in the Arctic there apparently isn’t very much annual precipitation here. However, since it doesn’t soak below permafrost or evaporate much, it all ends up being a soupy wet boggy region.

By end of the day I got to mile marker 259 and decided to stop here next to Trevor Creek. Each day had been successively warmer and it was even hot here. 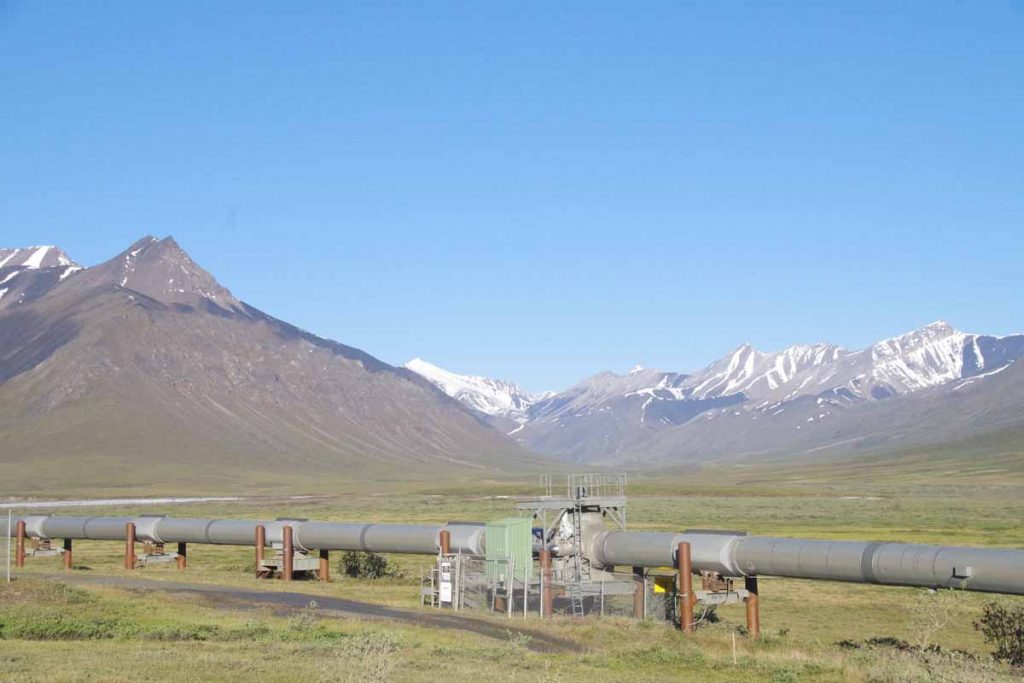 A long ride on the fourth day with a steady succession of goals. The top of the pass was 244, so I was only 14 miles from the top. However, it was also 2000ft higher. The first 10 miles went fairly quickly and were quite pretty as the mountains were up large and the pipeline was also right next to the road. 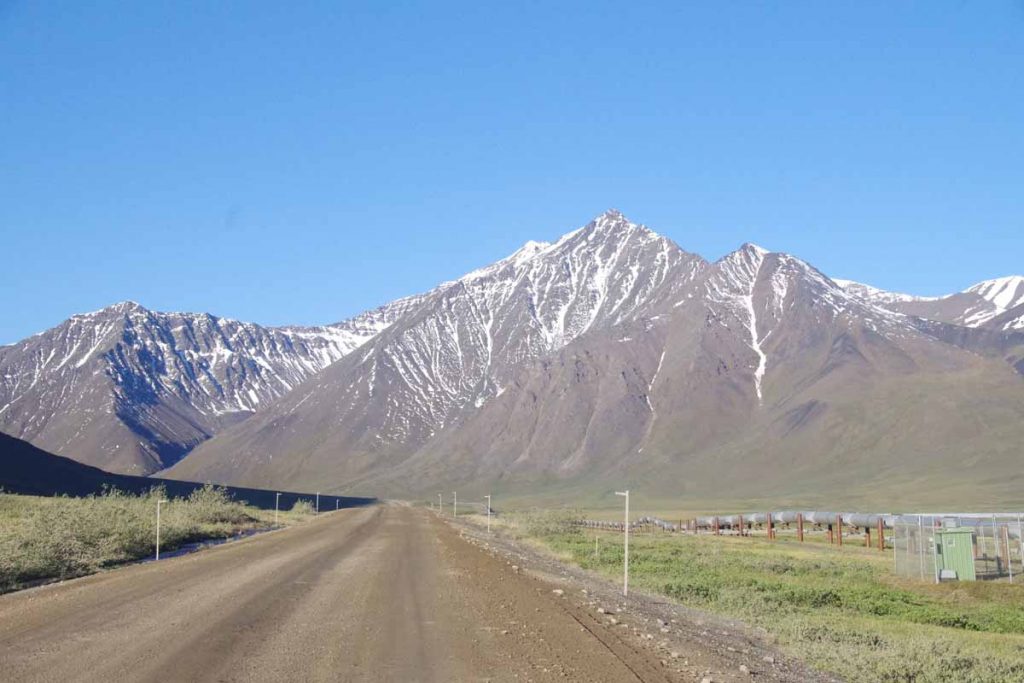 After that, the road tilted sharply upwards, reports of 12% grade in the last two miles. I got off the bike and slowly pushed it up the hill. It was nice steadily seeing my progress as the climb continued. Just as I got to top of the pass, the same trucker from day before came past and again handed out a bottle of water. 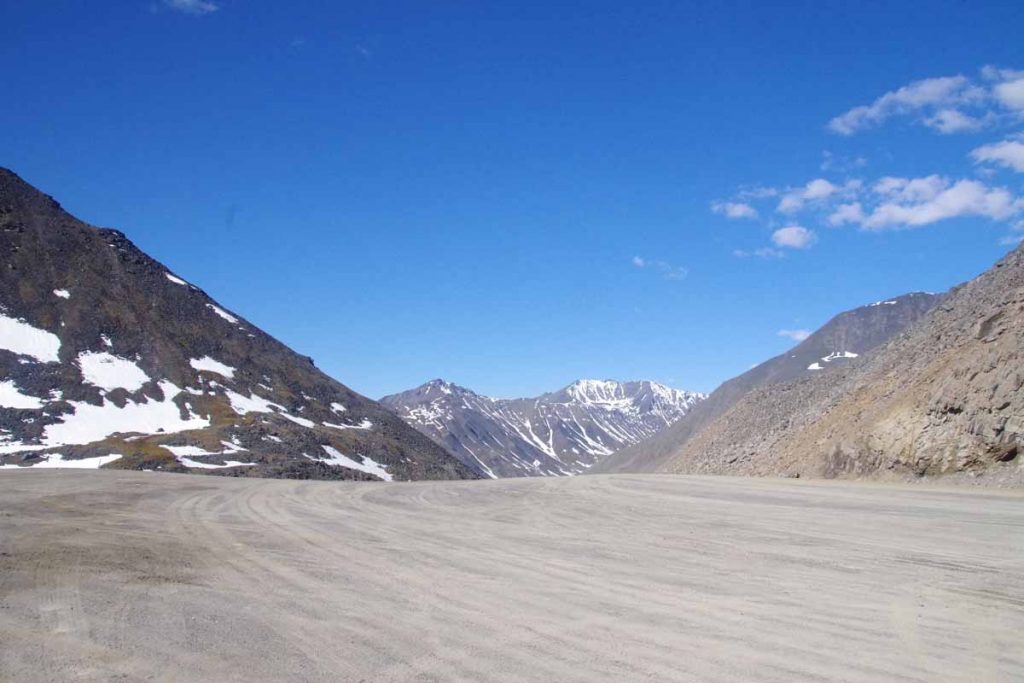 Photo above it top of Atigun Pass. Made it! Now the descent was almost as treacherous. Another 12% descent on full loaded bike meant some slow going on the brakes. After this some rocky riding to get myself across the Chandler Shelf followed by another 10% grade down into the valley.

There was a dramatic change here as I came across the first trees. The “last spruce tree” had been cut by some vandals but there were plenty of others nearby. It had taken me to almost noon to do the first 24 miles but from here the road would be better with half of it good gravel and the remainder even paved. The reward at end of this day would be a chance to reach the Coldfoot roadhouse. So plodded along and continued until later afternoon to reach Coldfoot. 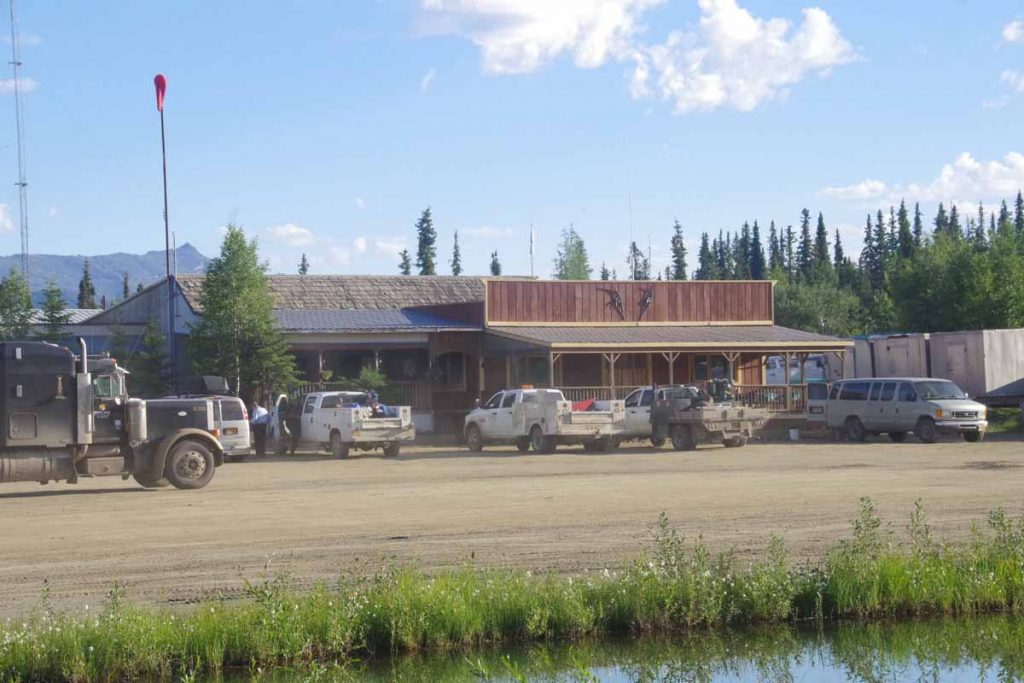 Motel rooms over $200 per night and perfectly reasonable space to camp. So camped, but did pay separately ($14) for a shower as well as later to do laundry. Took a rest day in Coldfoot and relaxed and watched the world go by. 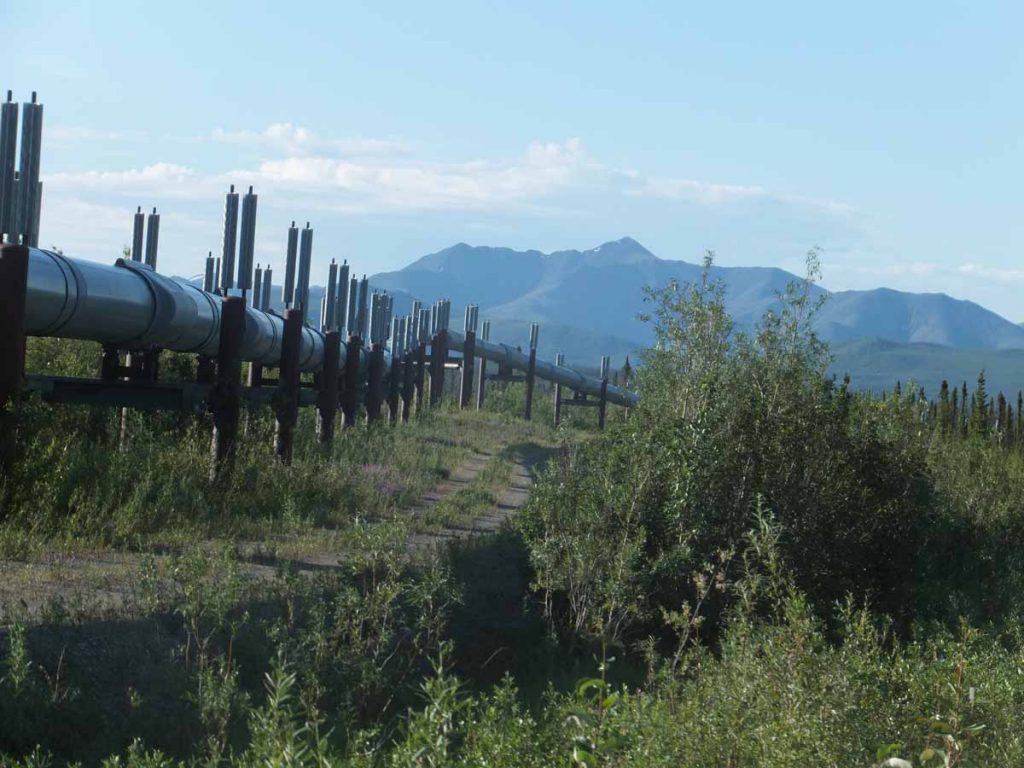 First day from Coldfoot was reasonable cycling. The road was at least nominally paved, though there would occasionally be longer gravel patches. There were also a few shorter steep hills and a longer climb to Gobbler’s Knob at mile 132 then several climbs getting close to the Arctic Circle. 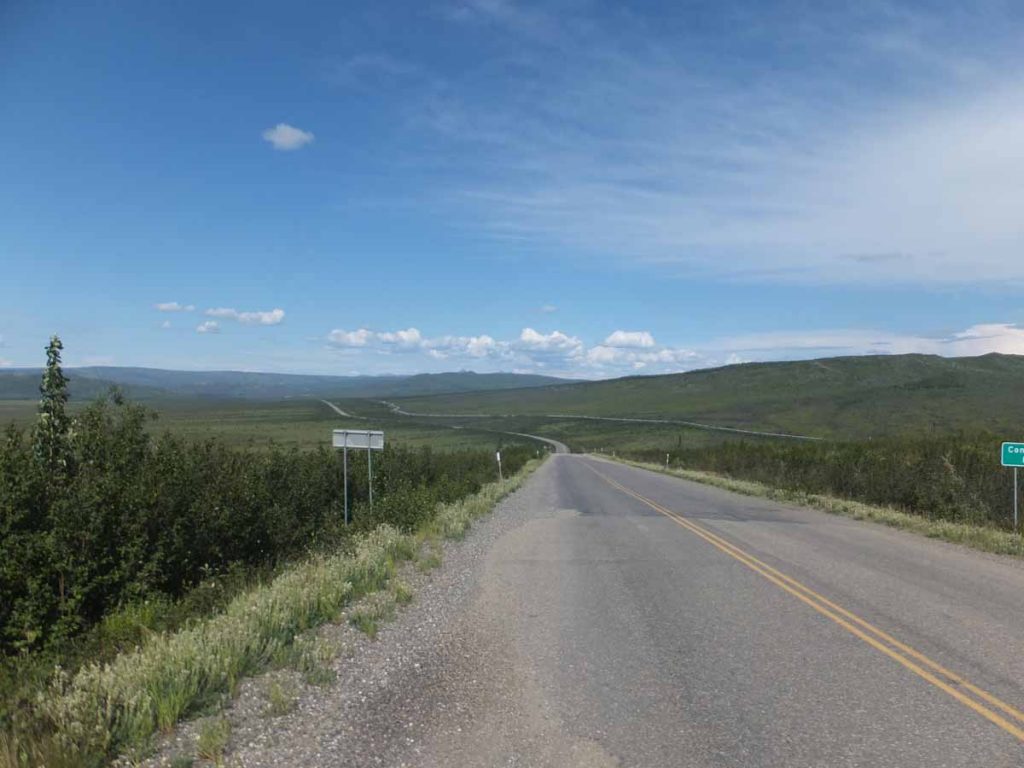 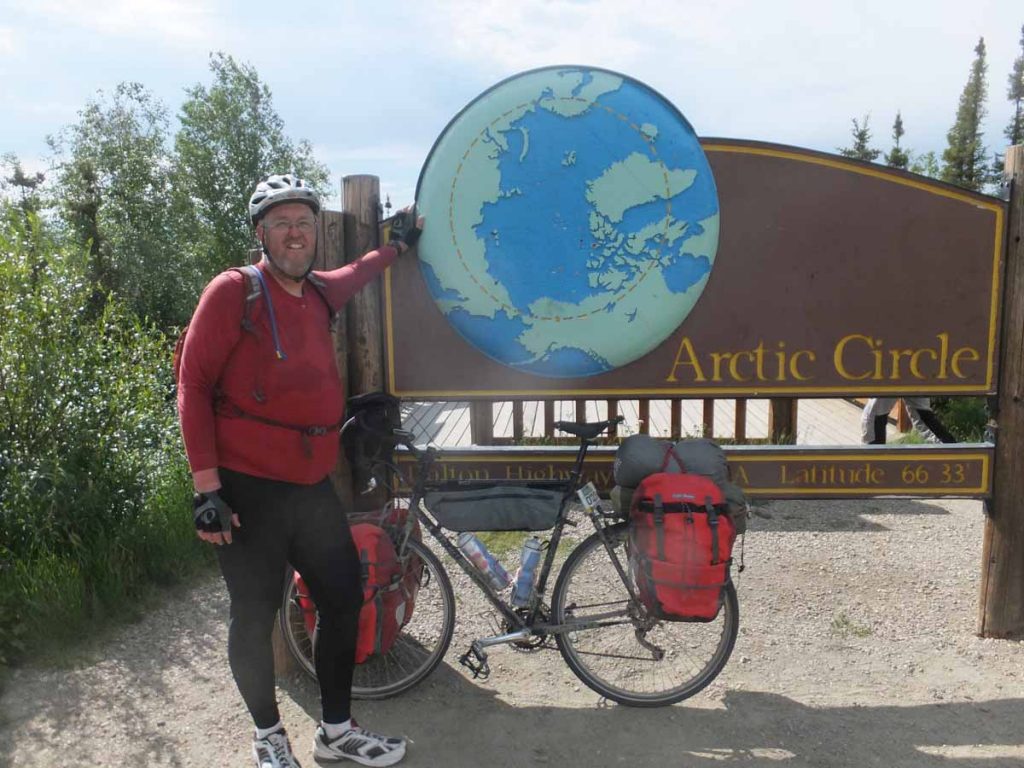 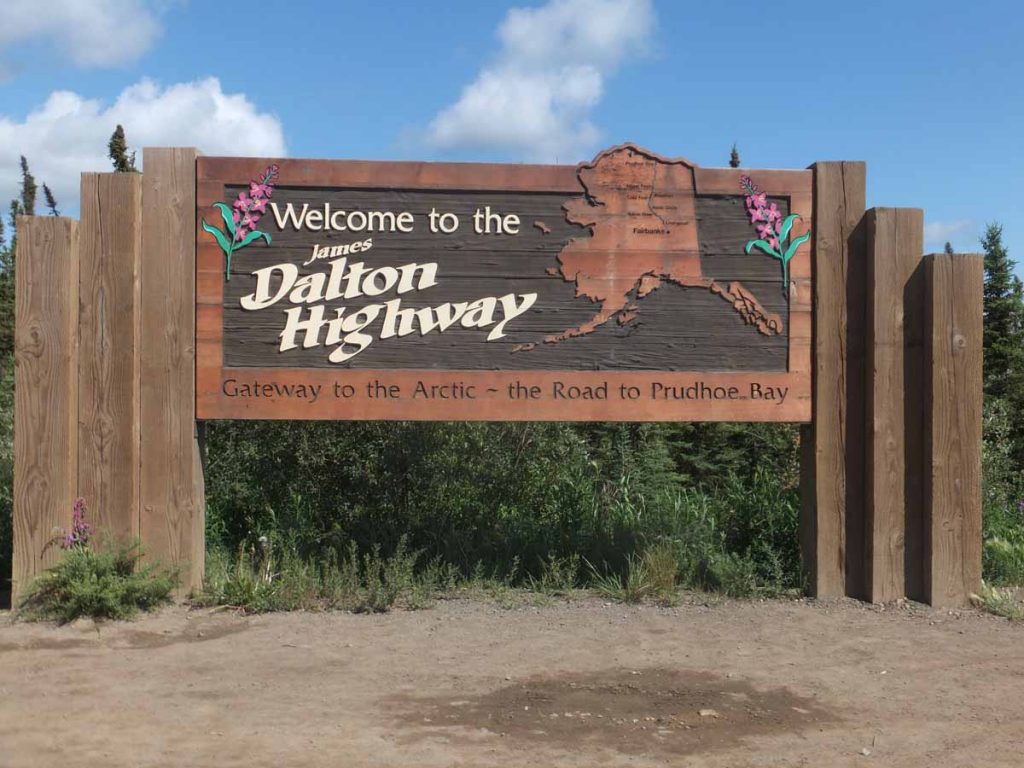