Last night storms came through but overall less rain than expected from the front. 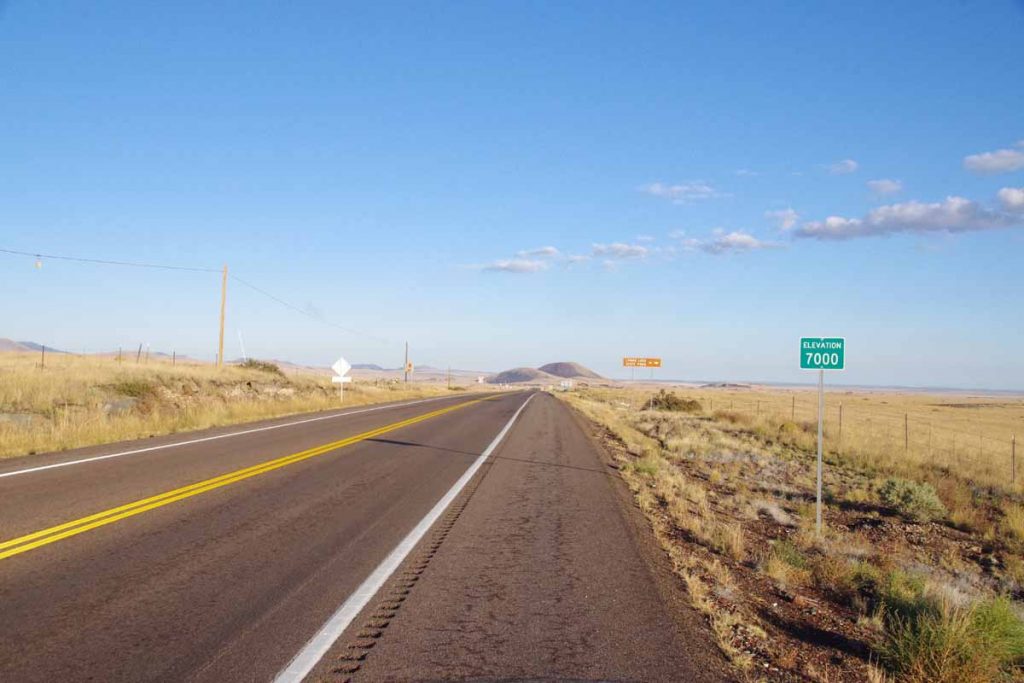 Beautiful morning cycling as I quickly left city limits of Springerville and was out in countryside. Today had increased traffic, even for a Sunday so expect Quemado was probably the most remote place. Signs told me I crossed 7000ft but just a few larger rolling hills today. 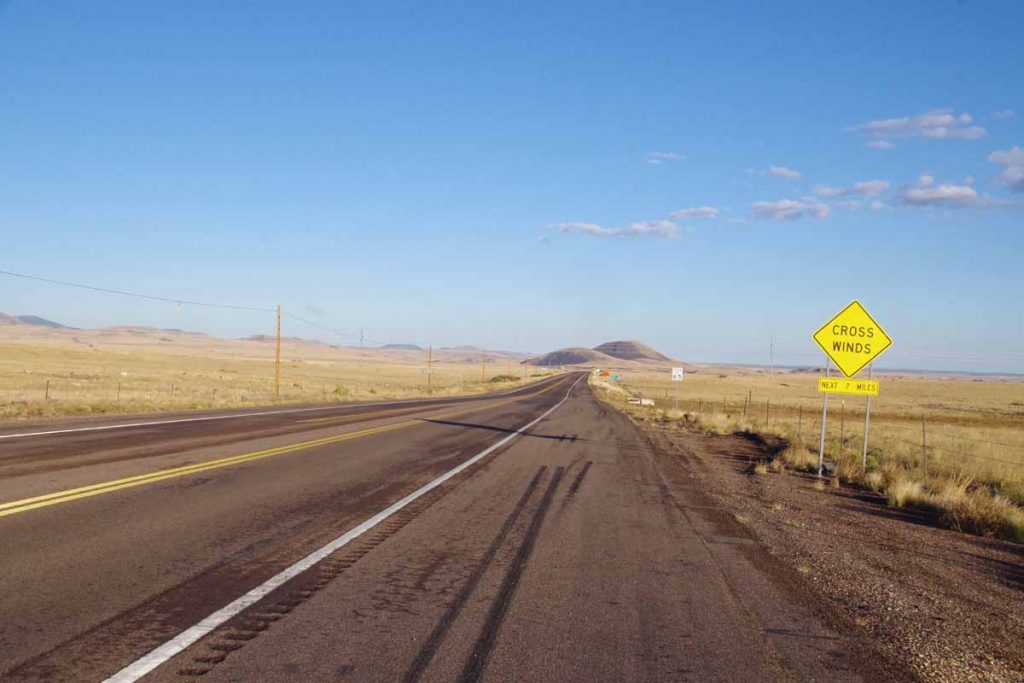 A sign told me to expect cross-winds for 7 miles. Fortunately, no wind. 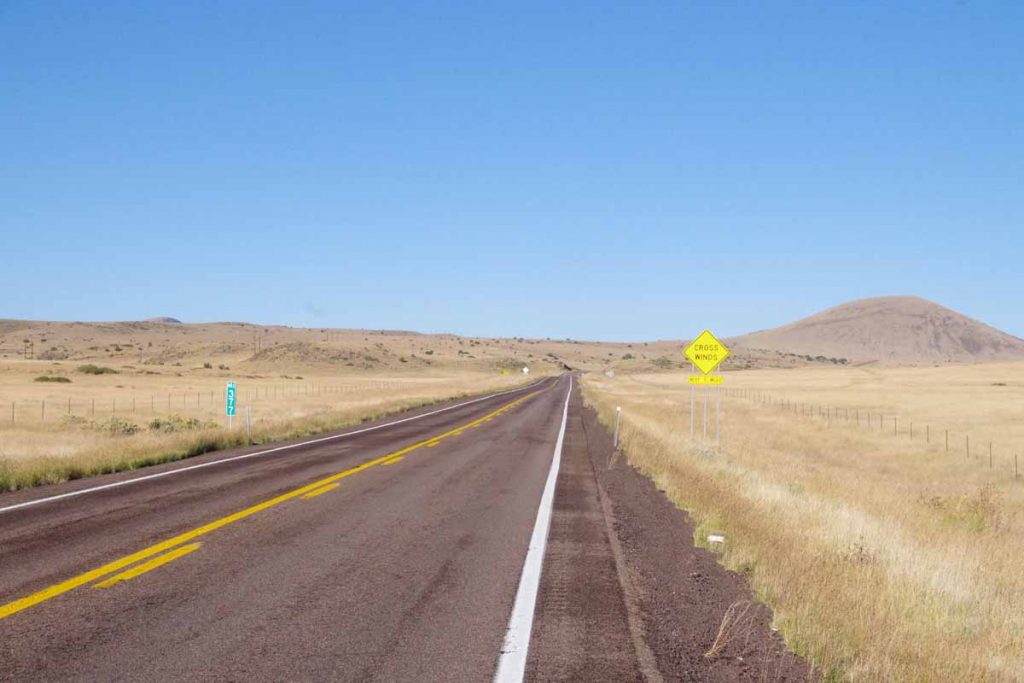 Seven miles later, there was a second sign warning of wind for next seven miles. Fortunately, no wind. 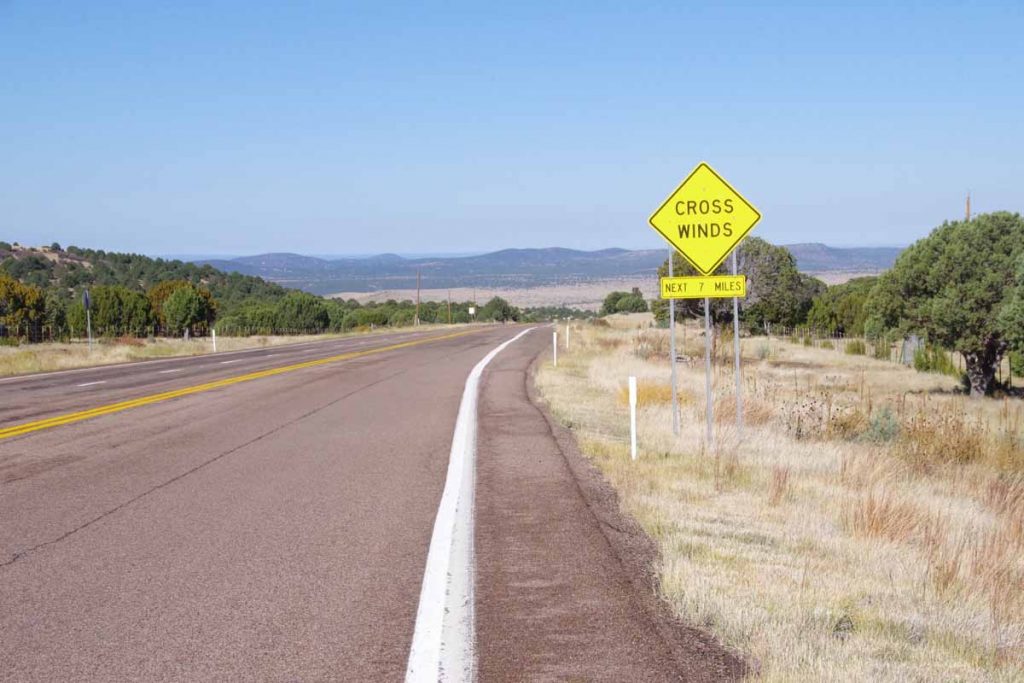 Seven miles later, there was the third sign warning of wind for next seven miles. Fortunately, no wind. 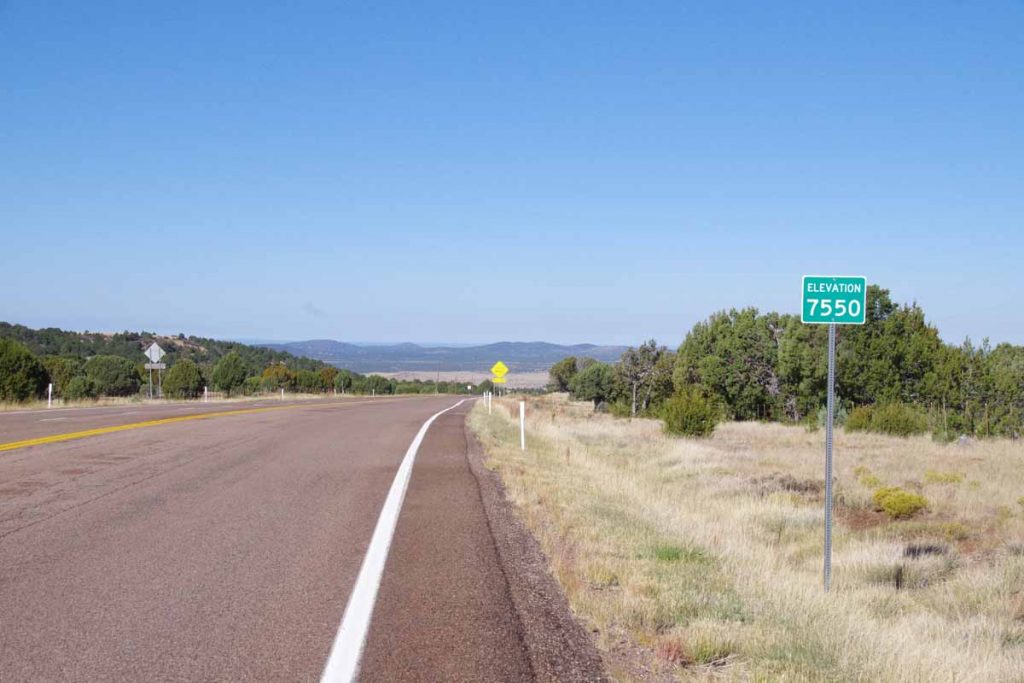 Crossed up over a low rise. At about 25 miles (i.e. a little past seven miles after the third sign), started with a light wind, but no more signs after that. Came along some low pinon pines and so also not as severe. 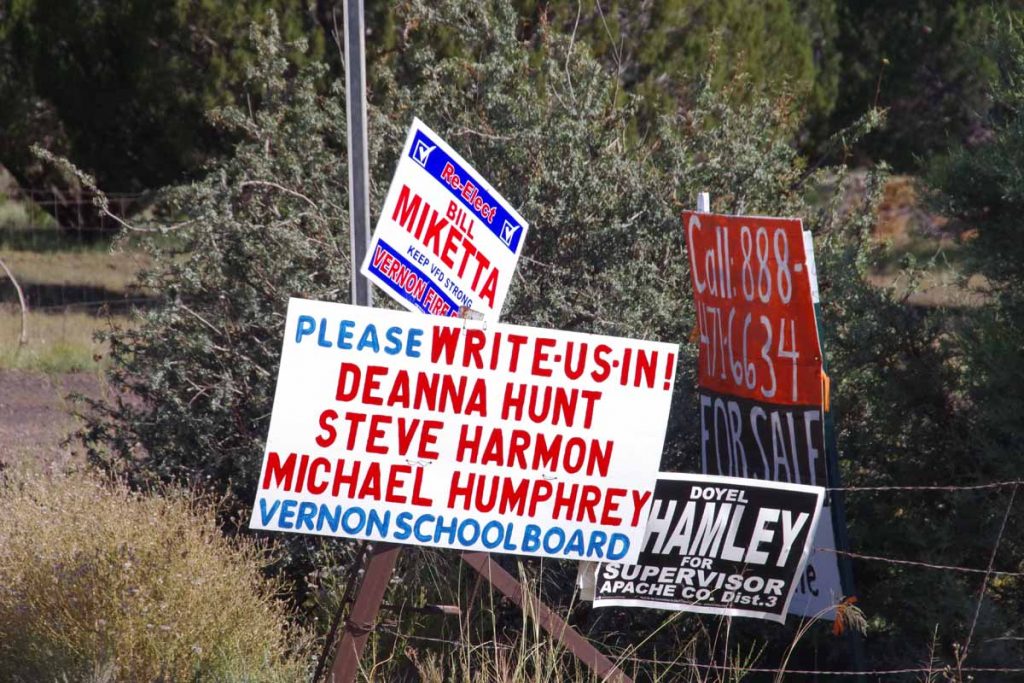 It is election season and most of the signs I’ve seen along the road are typically for local candidates, e.g. county officials or school boards or similar. Also interesting to compare the states so far: AZ has probably the most election signage, NM has probably the least. In rough order I would say: AZ -> MT -> CO -> WY -> NM. I’ve also seen the occasional Trump/Pence signs but except for right near Santa Fe, haven’t seen and Clinton signage. 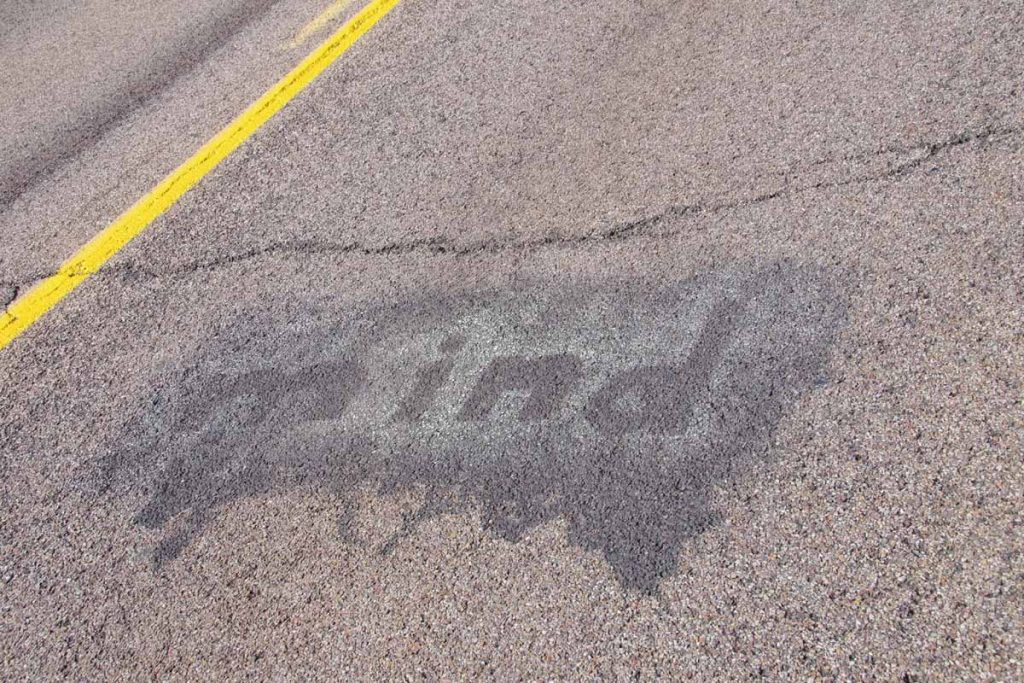 This was part of some road markings that said: “Don’t”, “make”, “me”, “lose”, “my”, “mind” with appropriate gaps in between. Not quite sure what that all meant. 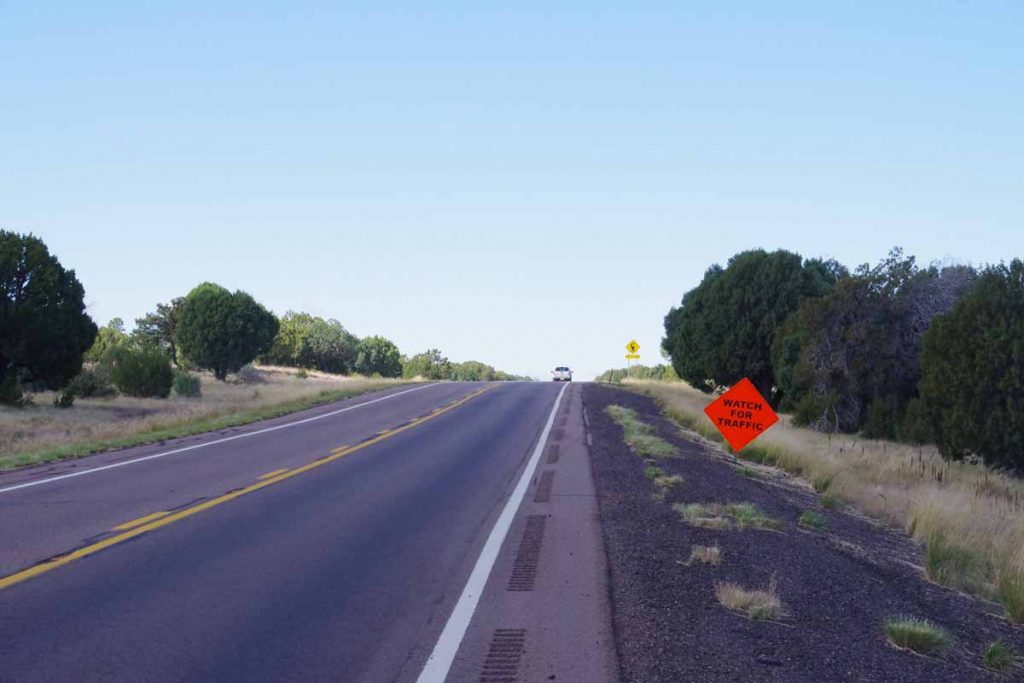 There was more traffic today, but not quite sure what good this particular sign was doing. Without too much trouble, I found my way into Show Low. I had left an hour earlier on the clock since I was no longer in daylight savings, so also a bit earlier on the clock. 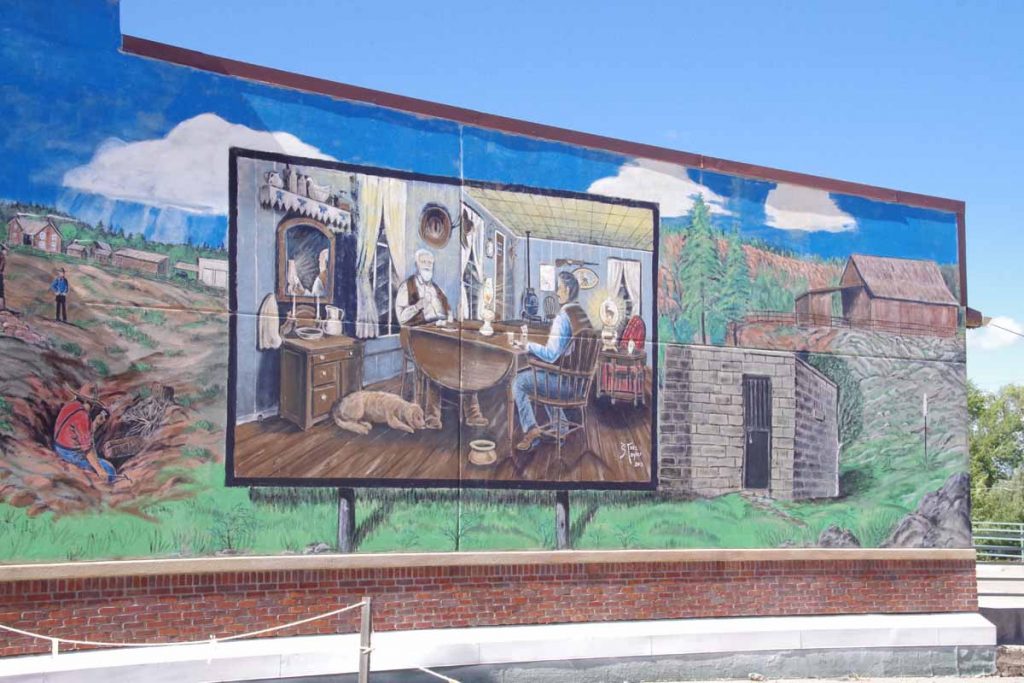 Show Low is a relatively spread out town. I did catch this mural on my way in. From here there are two routes to Phoenix: one via Globe and one via Payson. When I ask locals, they seem to split 50/50 on which route they take when driving.