Powered by bread and mandarin oranges, I came across the next set of hills and happened to run across a TDA vehicle along the way. 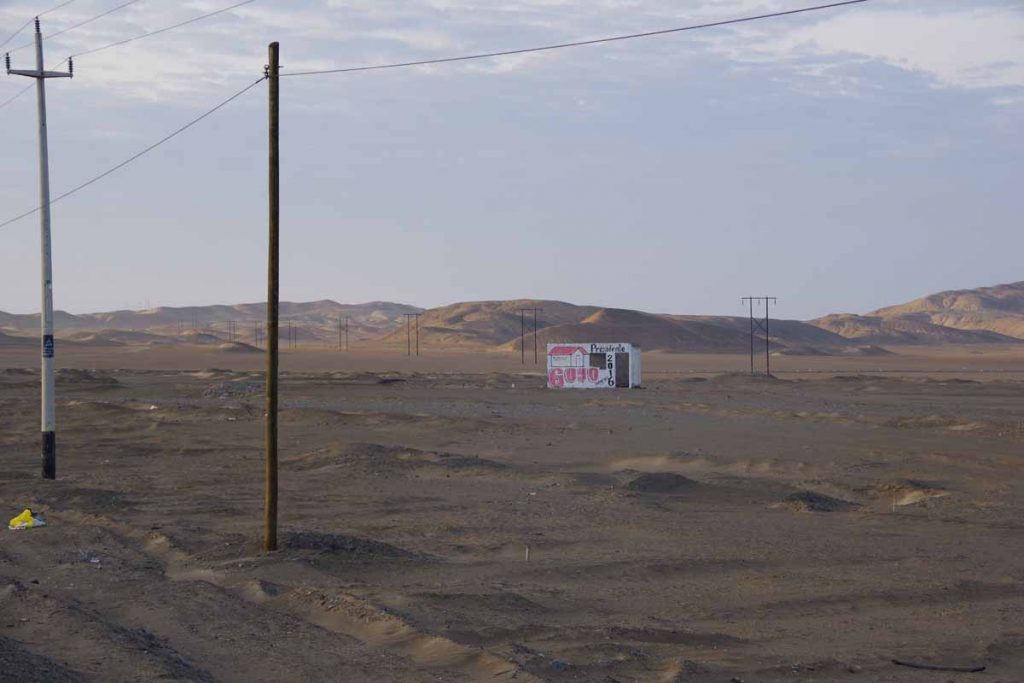 By now I’ve developed a food routine: lunch either along the way or late lunch in town I arrive. Dinner in town. For early breakfast and along they way, I get foods from the town. The bakeries often seem to have a set of fresh product in late afternoon, and local market is good place for fruit. I had some difficulty finding the market in Huarmey but after some asking found a nice set of mandarin oranges for morning and along the way. It would be a longer ride today, almost 100km and with more than 900m of climbing even though I mostly followed the coast.

These middle of the desert buildings often seem to be painted with election messages. Mostly for the 2016 elections, but I’ve seen some 2018 as well. 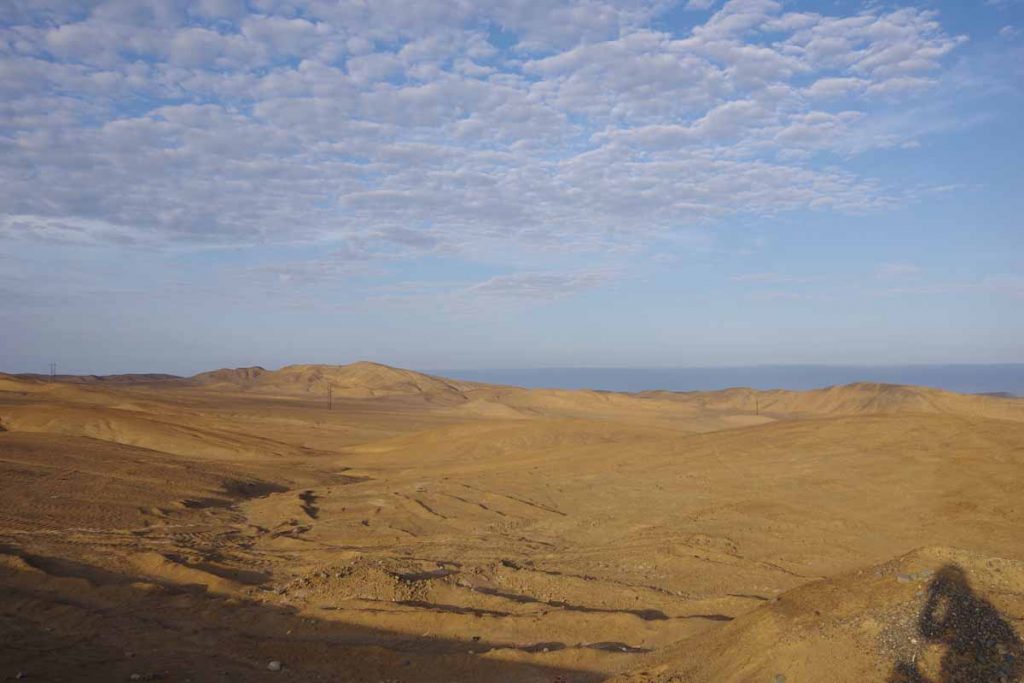 Today the route paralleled the coast with just a few spots for a longer climb inland. There was one climb to over 1000ft and a second almost there. Nothing extremely steep though. 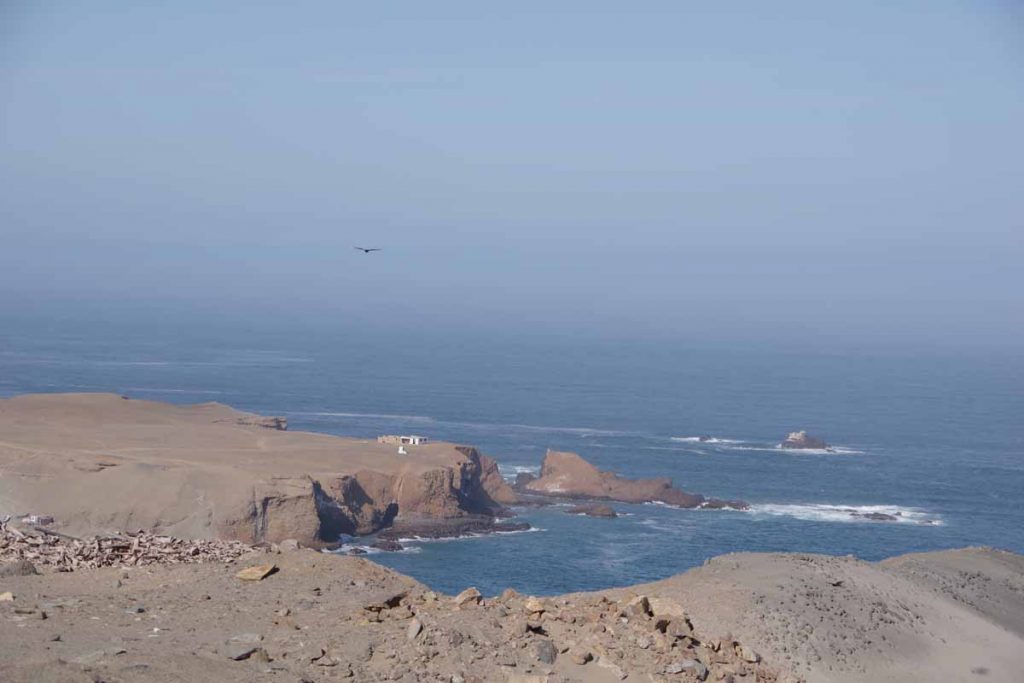 Nice coast with some rock outcroppings and what looked like empty sandy beaches. 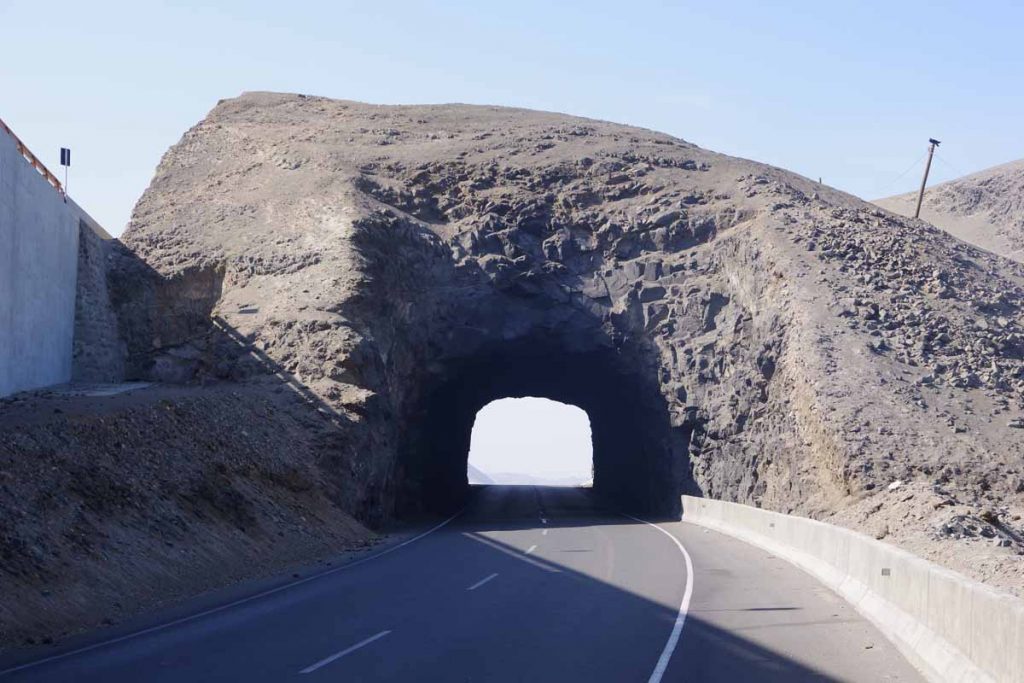 Outside the towns, the road is “autopista” and typically four lanes. The shoulder is often rougher so I’ll ride the white line and watch my mirror to see if I need to get over. However, traffic is very light so not often I need to move over. 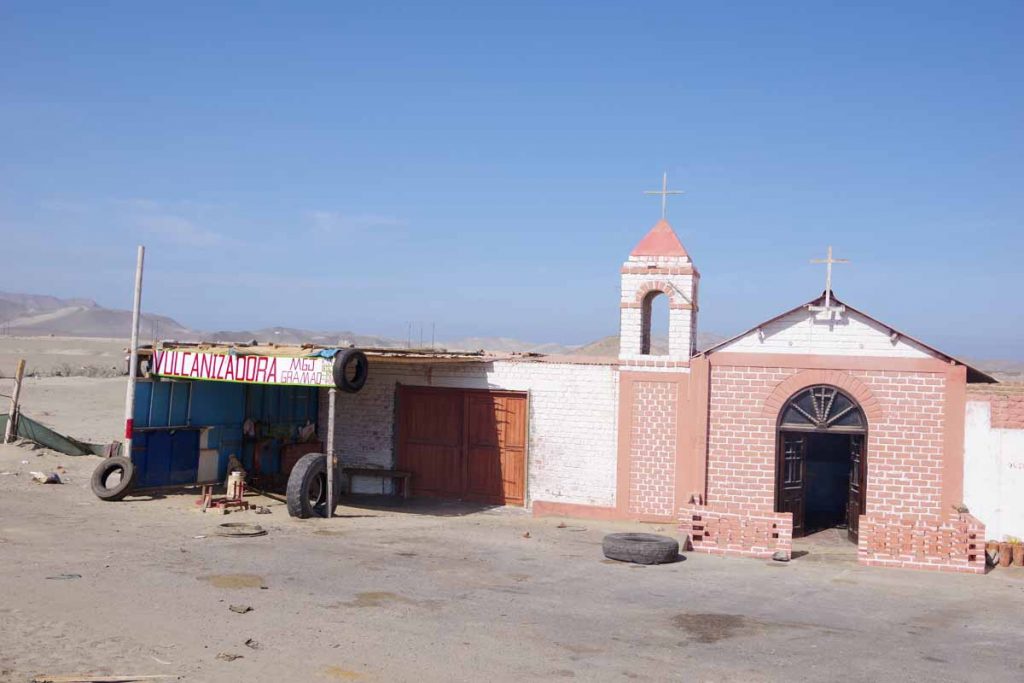 This establishment seemed to be a combination of church and tire shop. 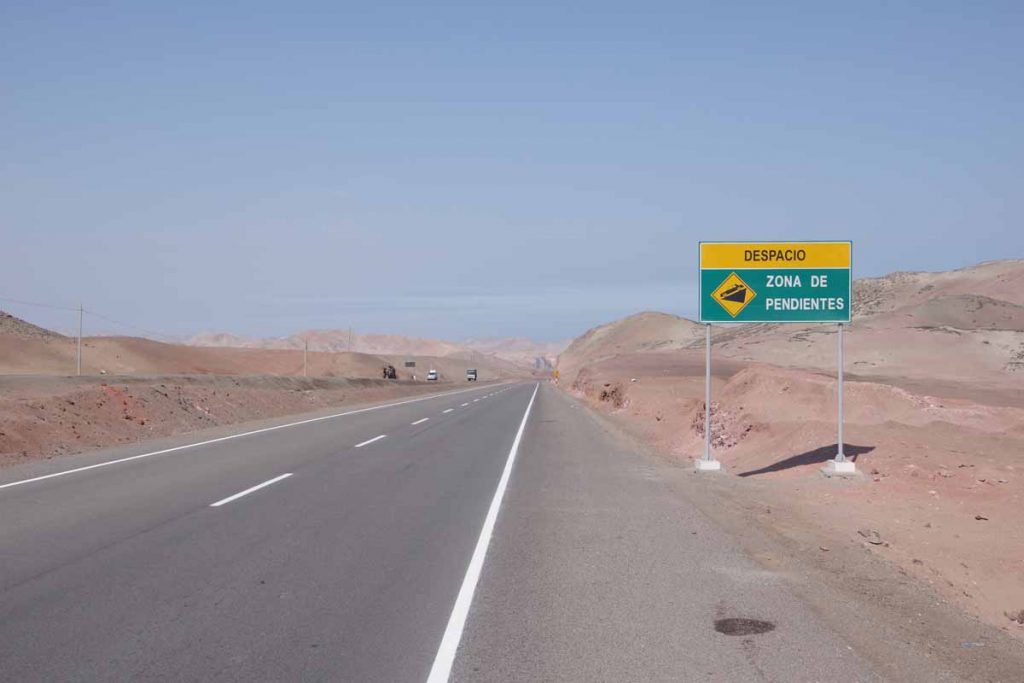 A new word to add to my Spanish vocabulary, pendientes = slopes, however I still wasn’t quite sure what it was warning me about since it wasn’t very steep. 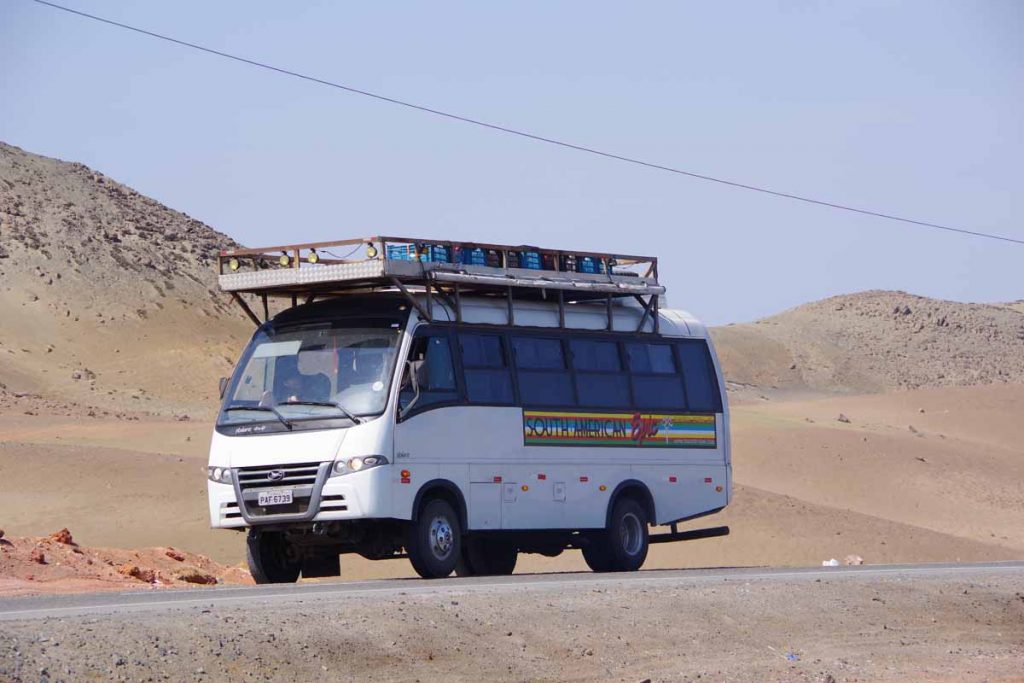 Not much past that last sign, I saw a bus stopped on left lanes. Thought it was interesting and zoomed in for a photo, when Yanez yelled out my name. Wow! This is a support vehicle for TDA and Yanez, Jacob and one other staff member (sorry forgot name) were on their way to Colombia to start that ride at start of July.

As you know, my plan is to join TDA trip a little over 6000km from here in Puerto Montt out in November. However, already got a chance to see the support vehicle and meet a few of the staff for this trip. 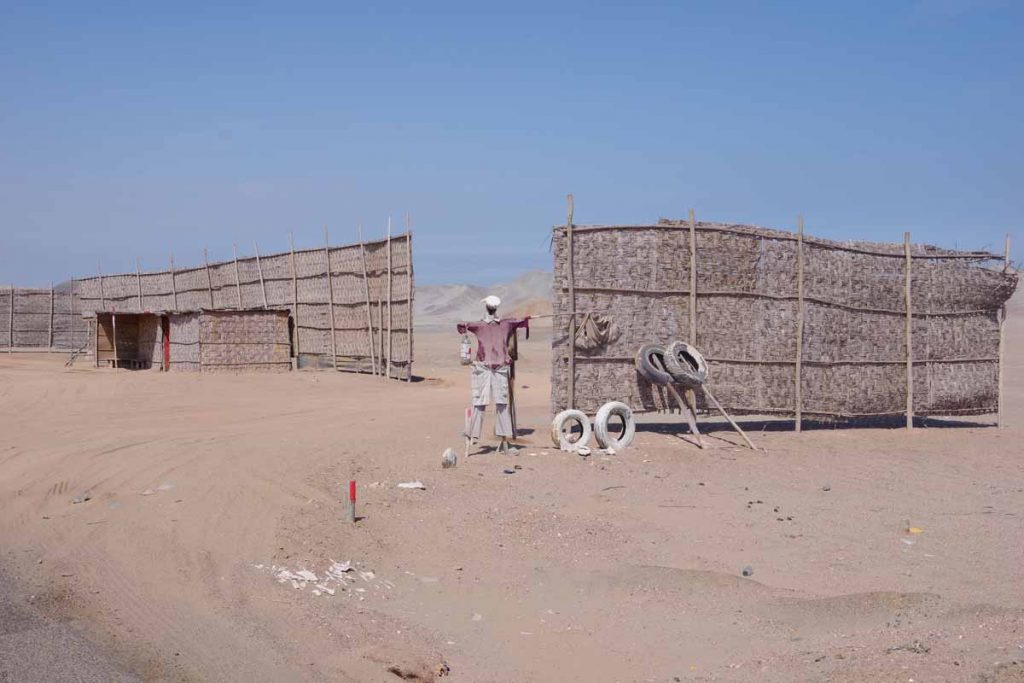 Some of these local establishments seem to have scarecrows. Not sure exactly what they are protecting or scaring though. 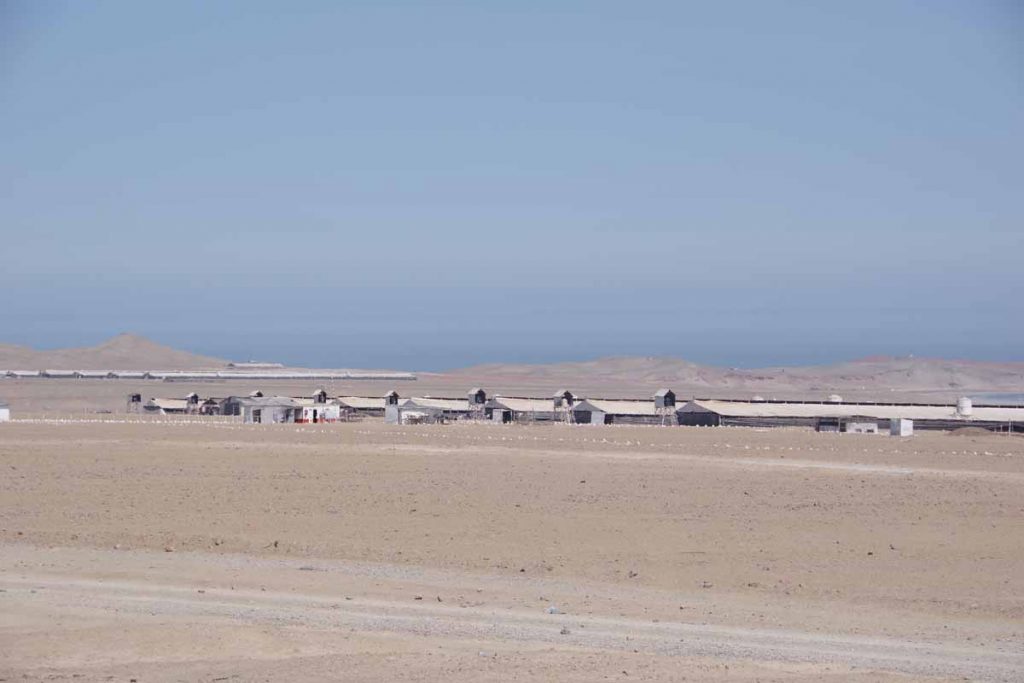 Several groups of these large tents along the way. As best I could tell from the signs, these are chicken farms. 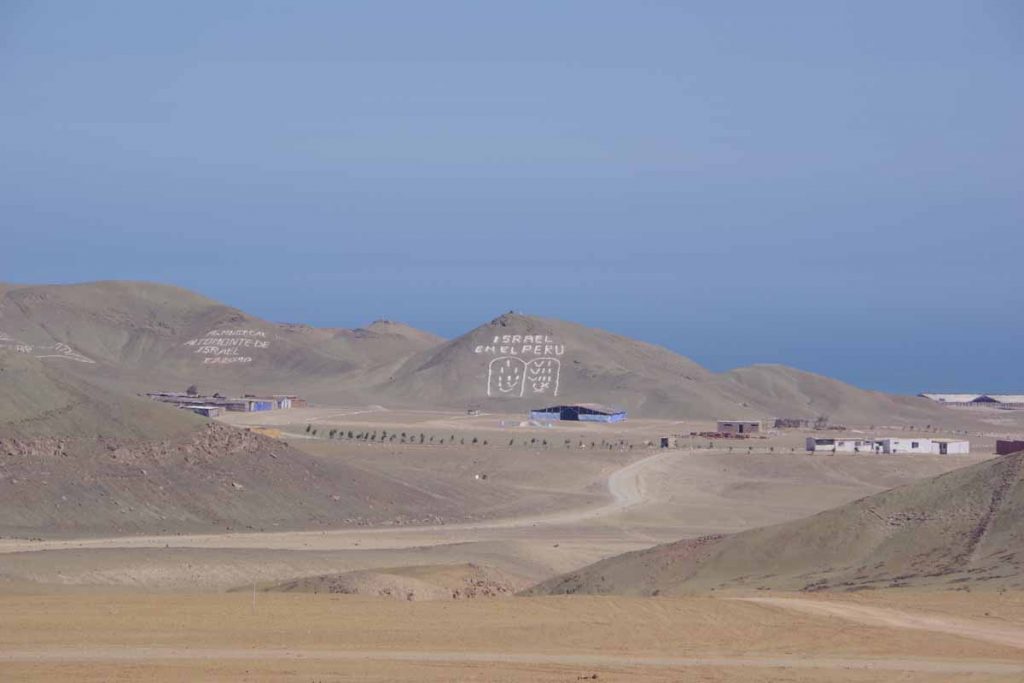 Another beach settlement. As best I can tell a drawing on hill of the 10 commandments.

The last kilometers into Barranca were agricultural and a little greener. Also past an interesting looking archaeological site.

Today also marks a milestone of 365 days, one year, on the road. During that time I’ve traveled 18,551 kilometers and best guess is another 8,690 kilometers left to Ushuaia. Nice to hit this milestone.