Two days of picturesque cycling have brought me to Cafayate, a tourist town in the wine region.

Day One – Salta to La Vina
Overcast and cool with occasional showers on my rest day. 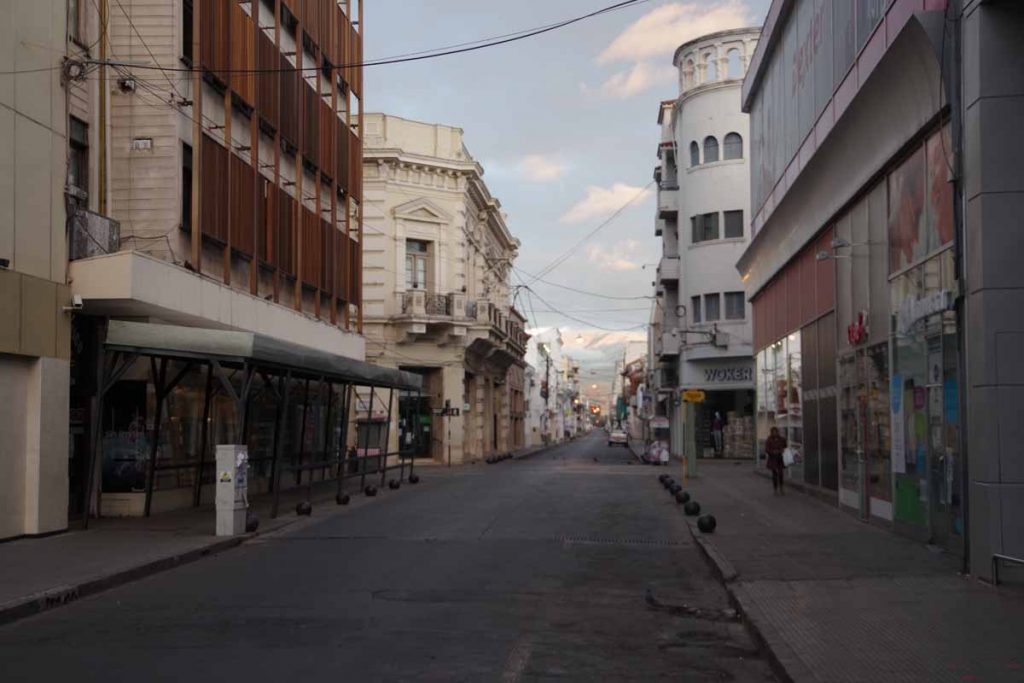 Streets were very quiet on a Sunday morning as I departed. I could follow the grid pattern of streets to eventually make my way south to the major highways leaving town. These were a little busier, though I expect much quieter than a week day. 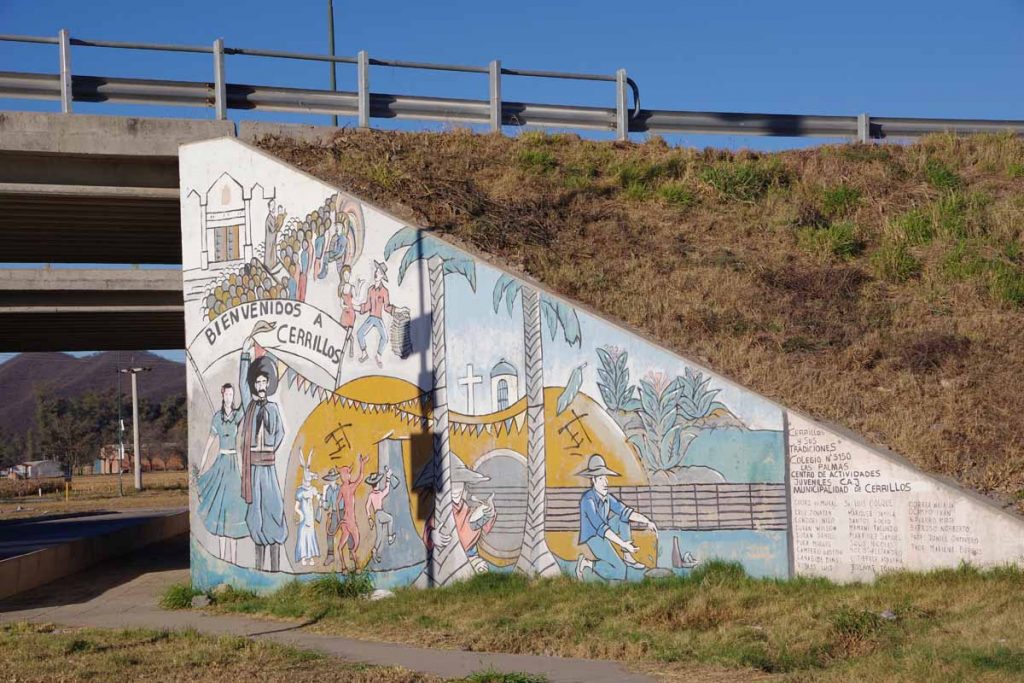 I crossed several small towns including Cerrillos. Despite it being Sunday, I had an impression that more places were open than I had found before Salta. 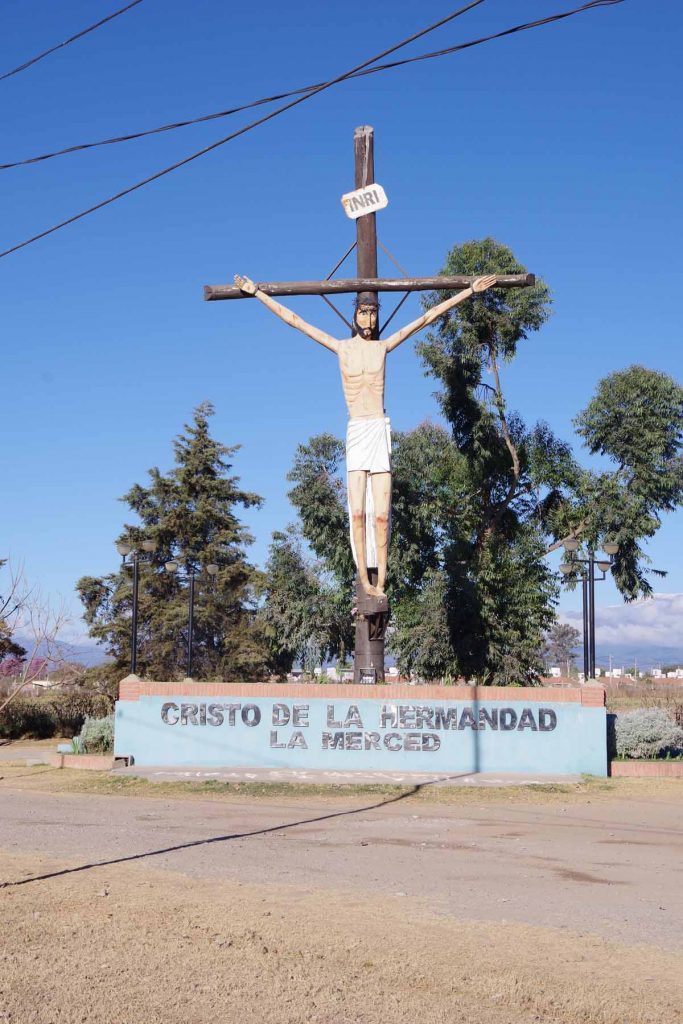 La Merced was one of those places and had a very religious name. 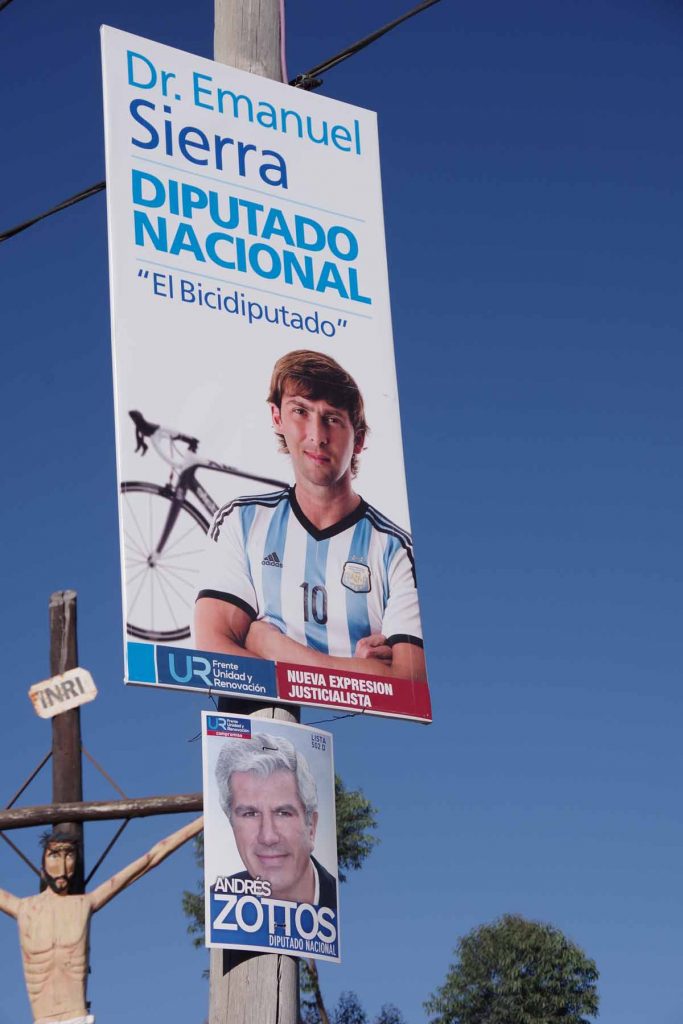 An election is coming soon and hence many posters were up. Not sure of his politics, but I found the poster for “El Bicidiputado” interesting. 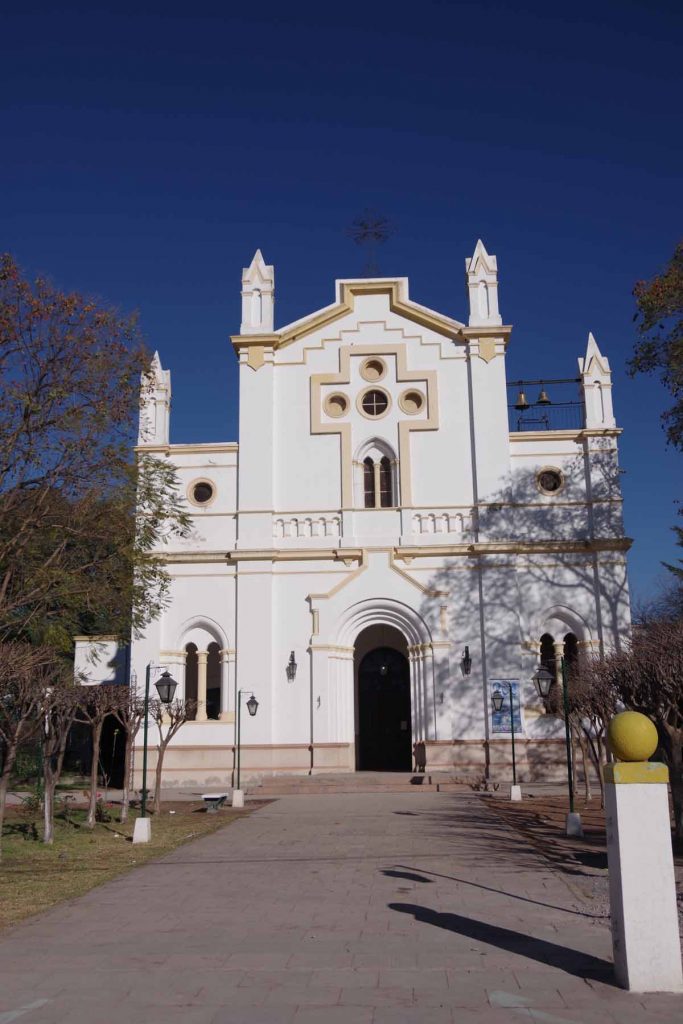 Church in one of the small towns.

Along the way, I met with Alex (boundlessbiker.com) who I had first met in Baja California back in December. We cycled for a bit together and stopped and had lunch in Coronel Moldes. After that we both we cycled further to La Vina and shared a room in a hostal. Alex was a bit faster so I encouraged him to go ahead. Fewer photos though from this point. 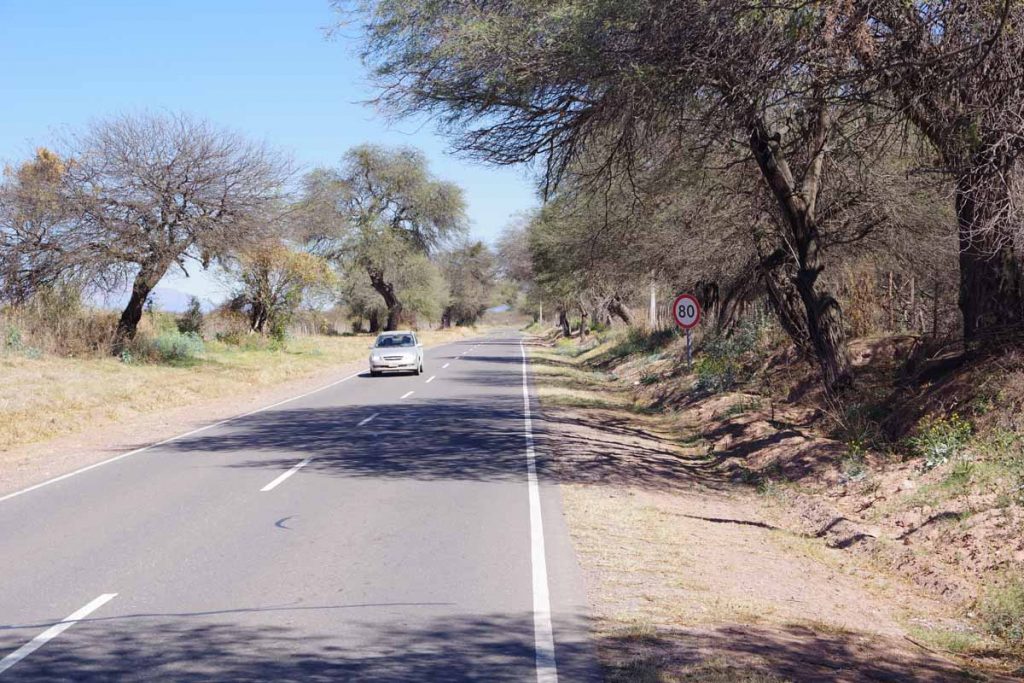 A photo of the road, by now it was calm riding without much traffic. 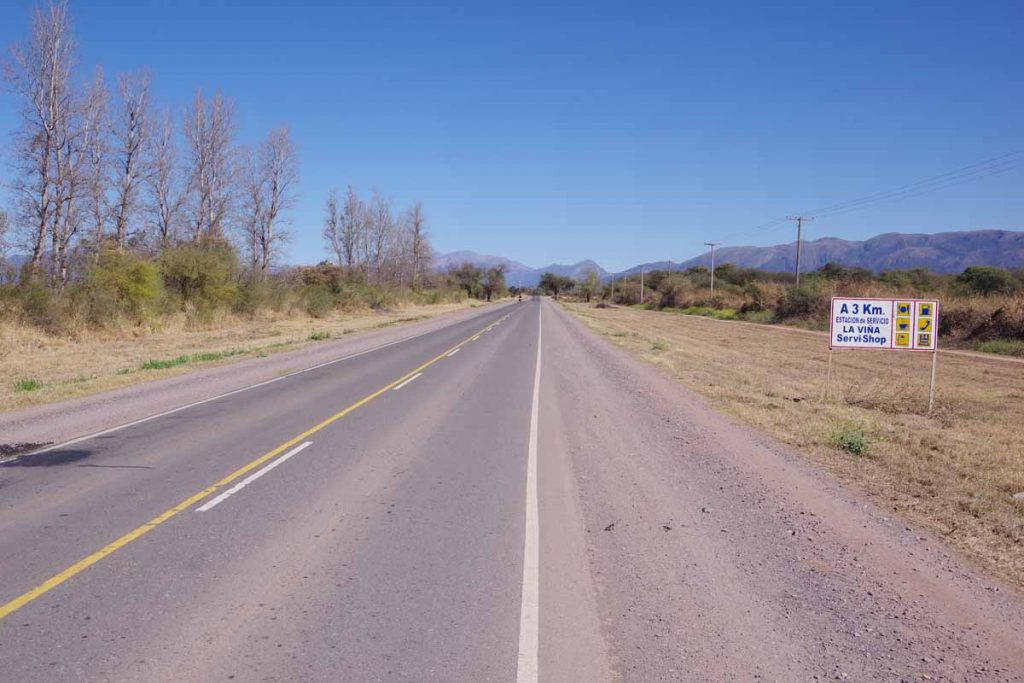 Coming into La Vina were signs for upcoming businesses.

Found a hostal that was only 250 pesos per person and otherwise a nice comfortable place to stay. It was 1.5km from the town of La Vina and we walked into gas station for snacks. In the evening a meal at the hostal that was surprisingly expensive, particularly given the inexpensive accommodations. 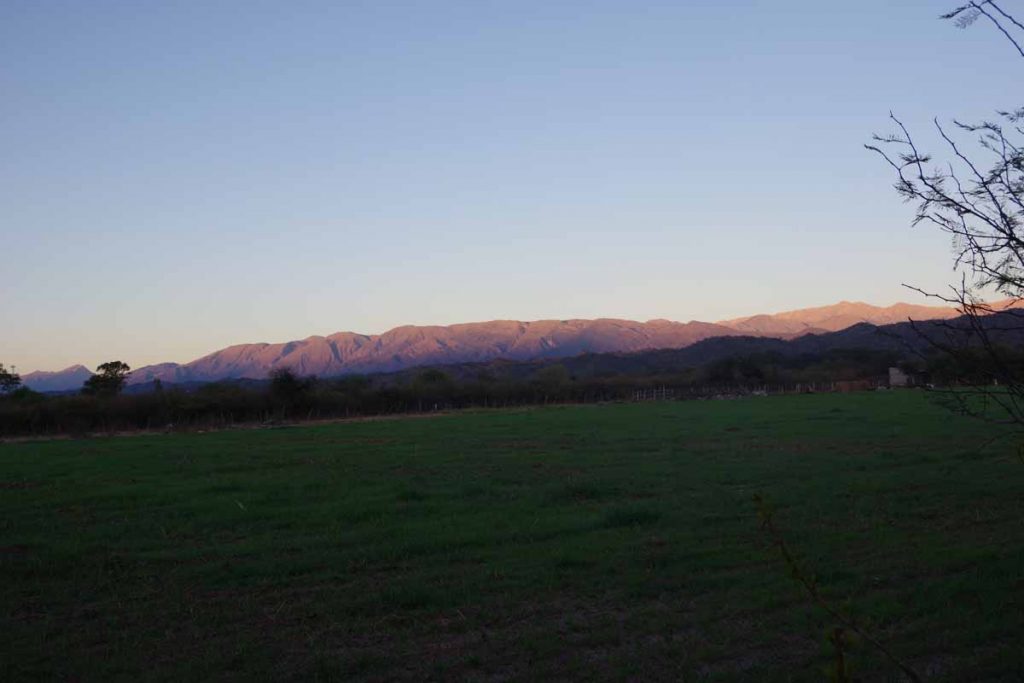 It was colder than expected this morning. I left right around sunrise and temperatures ended up going down to -2.8C (27F). Otherwise beautiful starting out. 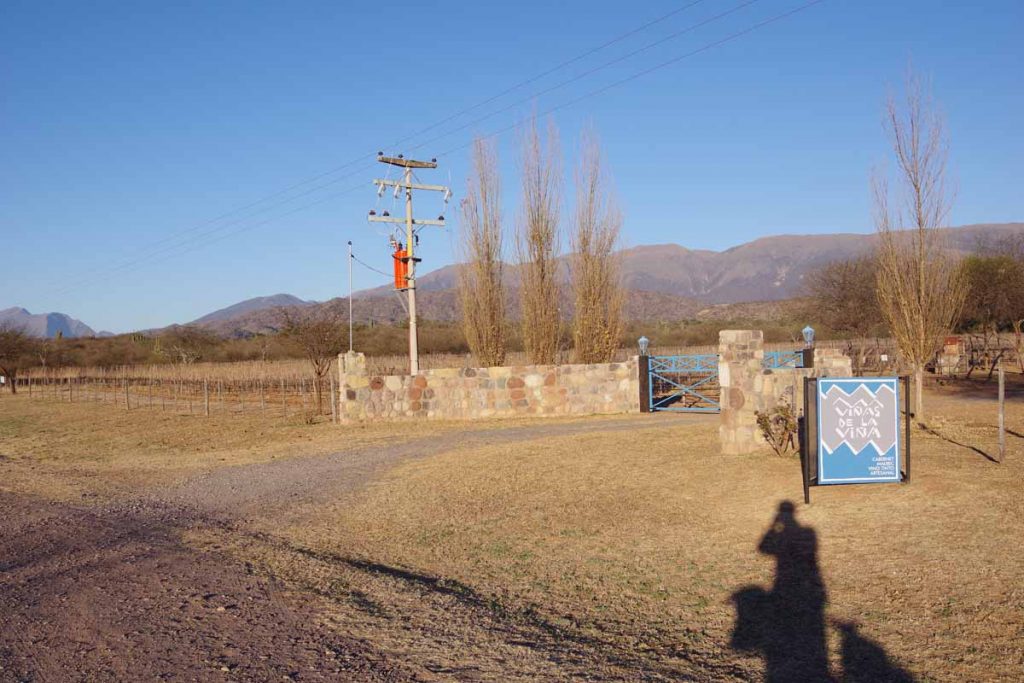 This area is marked as the wine route and I even passed a few vineyards this morning. 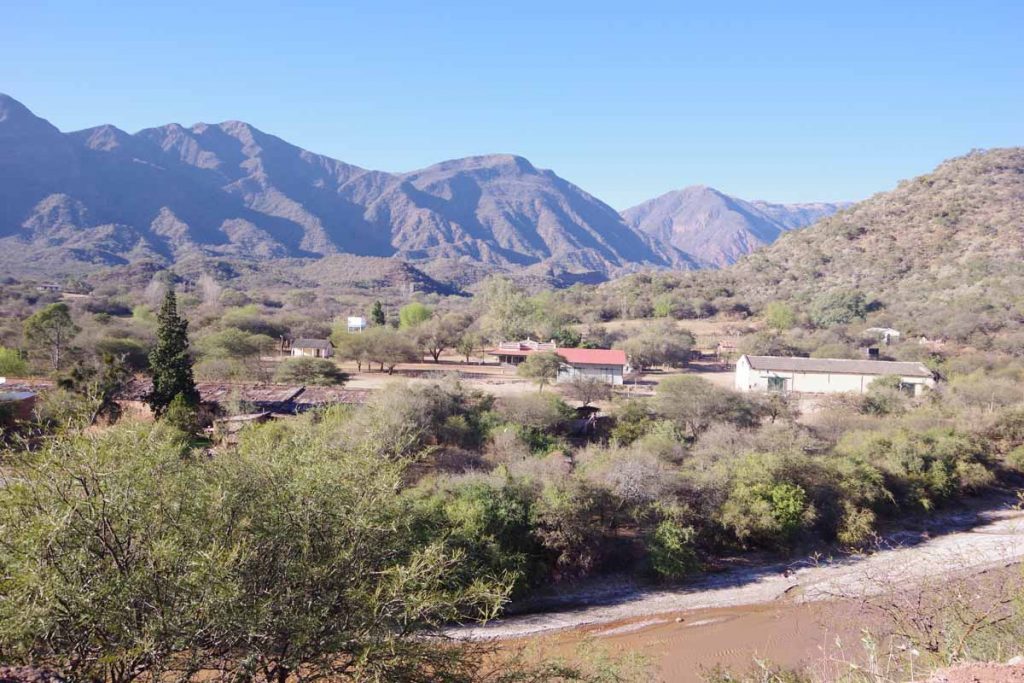 At 24km was an overlook into small Allemania settlement. The railway station is a popular place for cyclists to camp and this would have been the backup plan from yesterday. 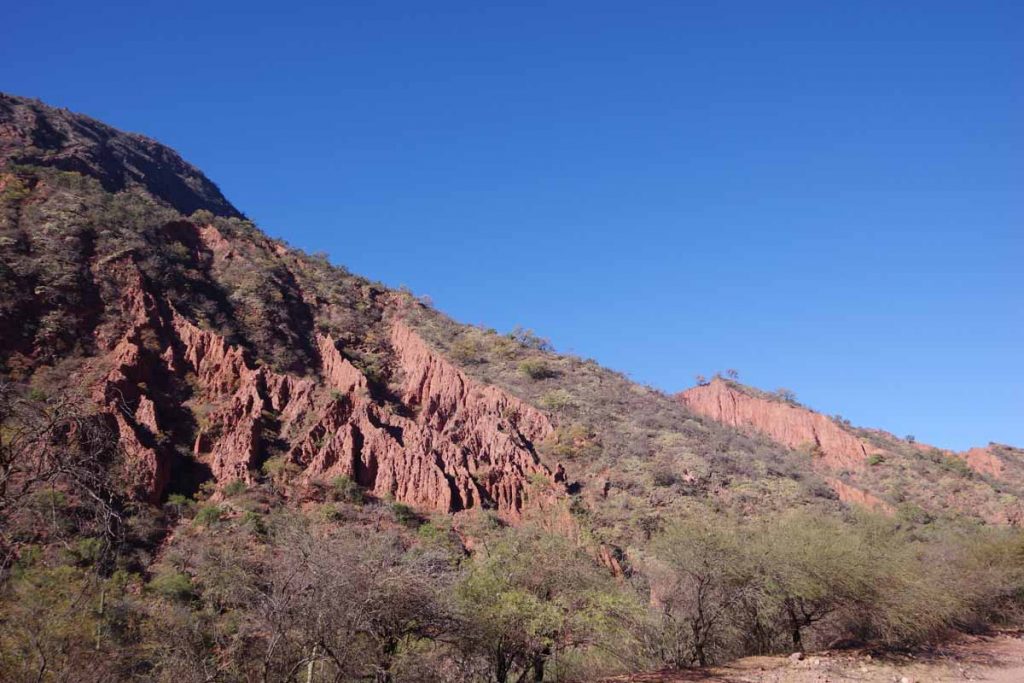 After this the road more closely followed a canyon on way up. Colorful sandstones that reminded me of the American southwest. 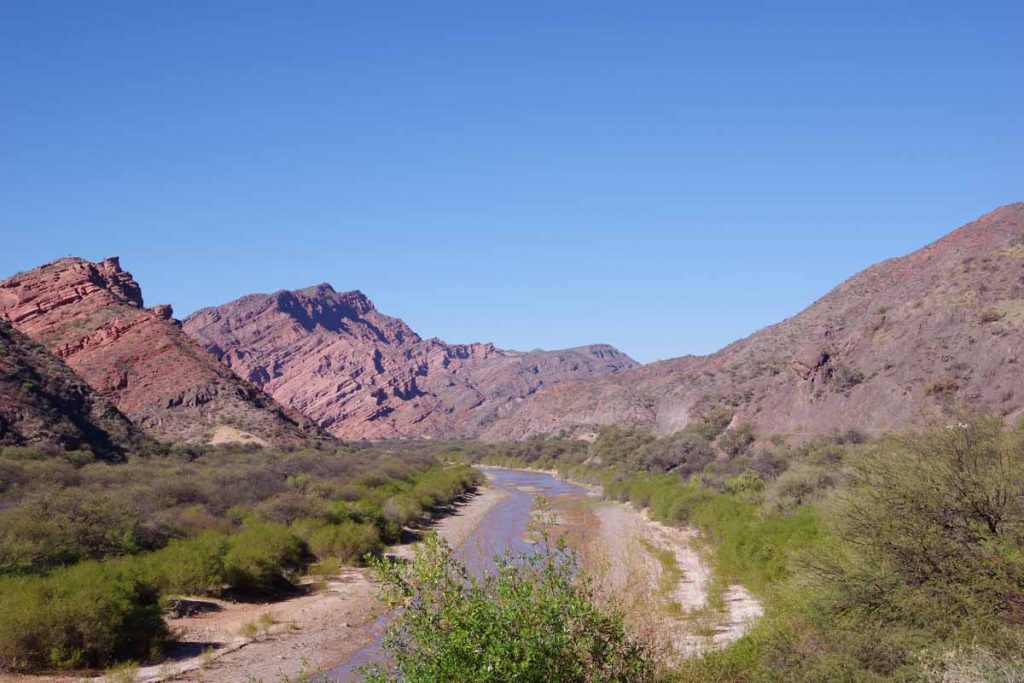 Another photo of the canyon while cycling on way up. 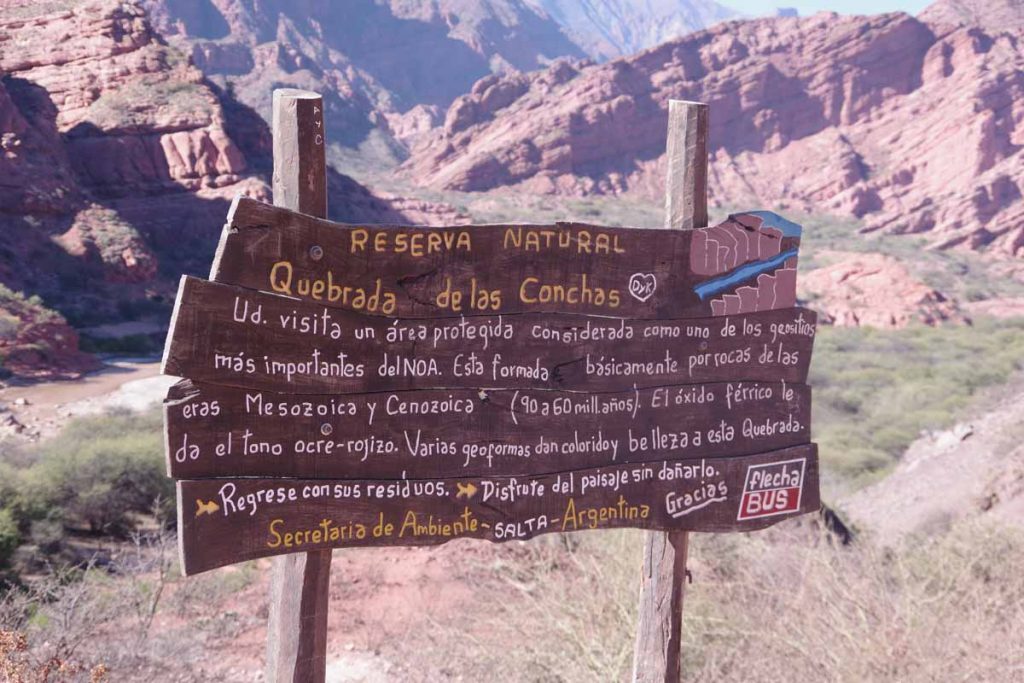 This is a natural preserve and had multiple signs like this one for most interesting places. 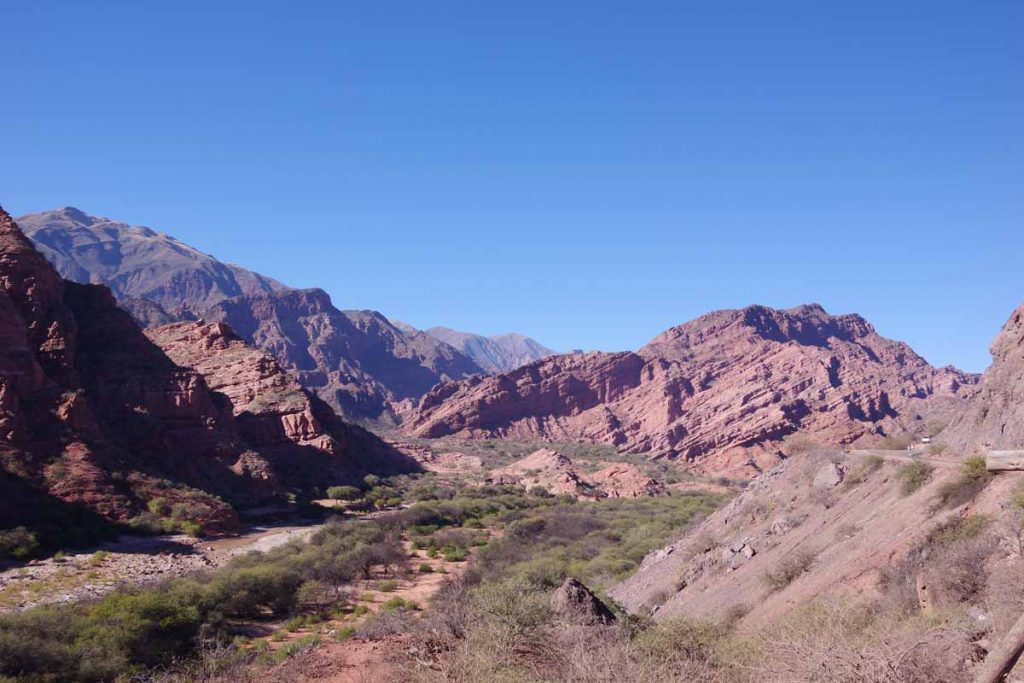 Another photo of the canyon. 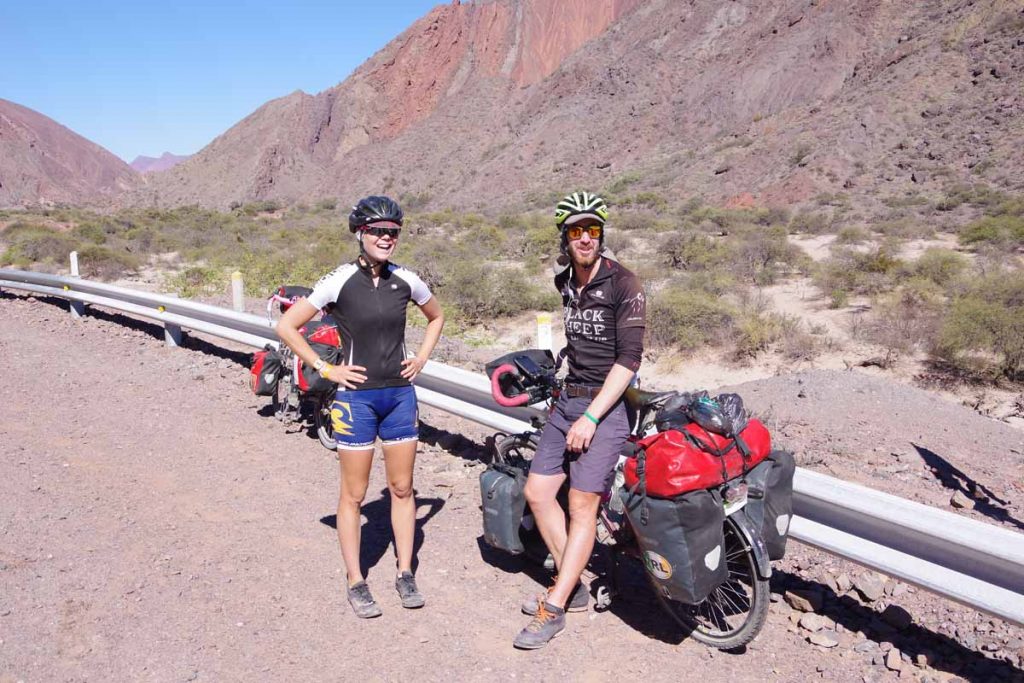 Mid-morning two cyclists passed. Laura is English and Herbie is Irish. They had camped at Allemania last night along with an Austrian cyclist (Claus) and an Argentinian cyclist (who I didn’t see). They started in Vancouver, BC last September and are on their way to Ushuaia. Their web site: www.pedalling2patagonia.com. 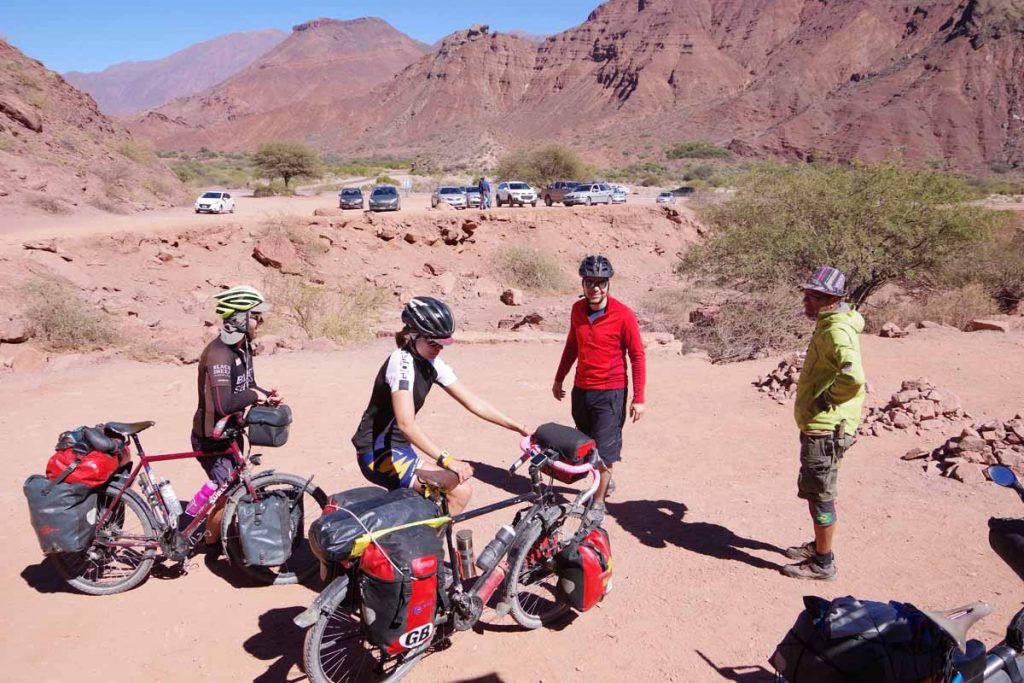 A short while later we met up with Claus and Alex at a scenic deep gorge. 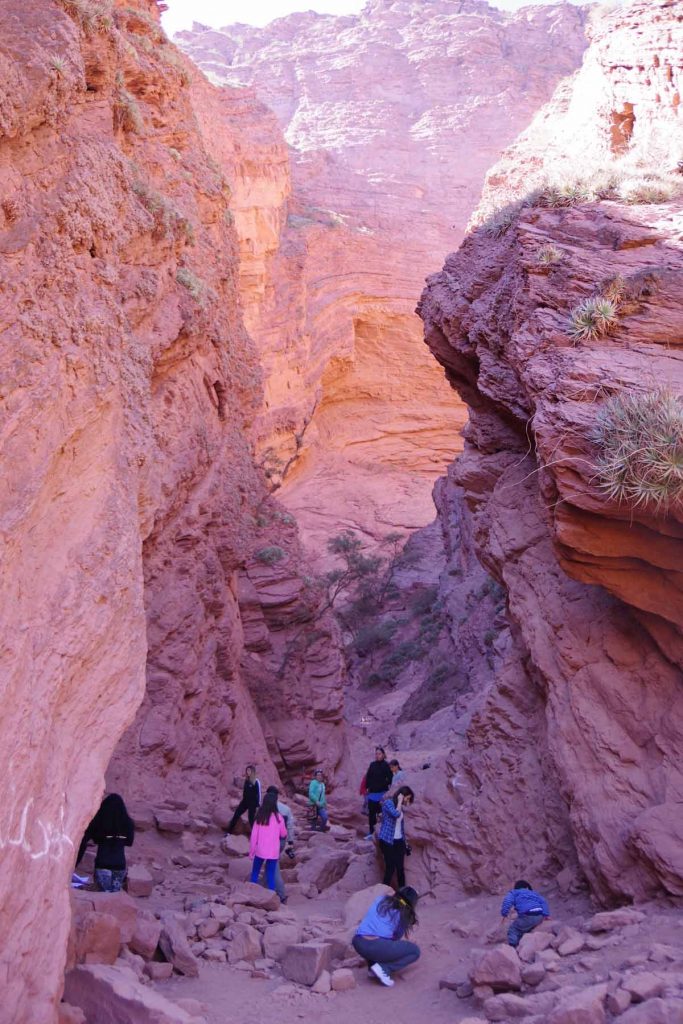 A picture of entrance to the gorge. 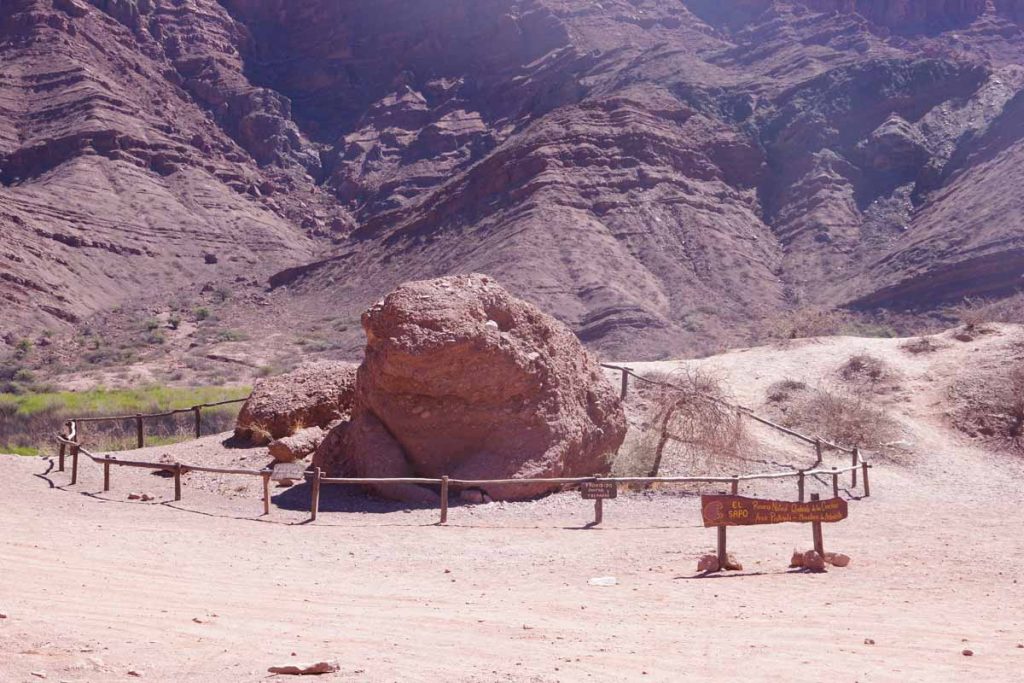 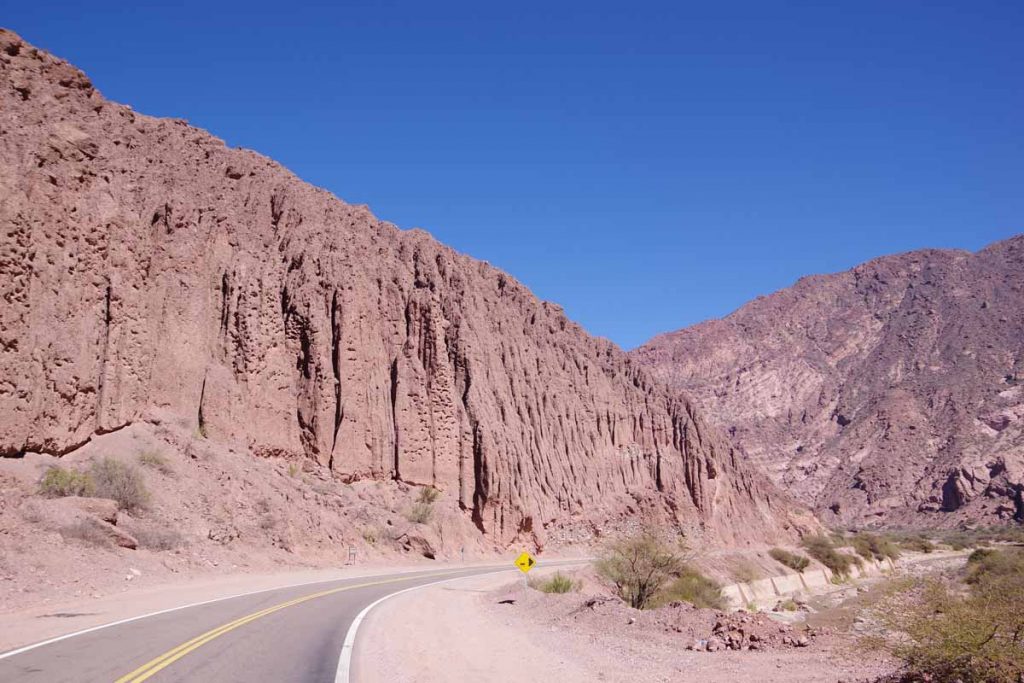 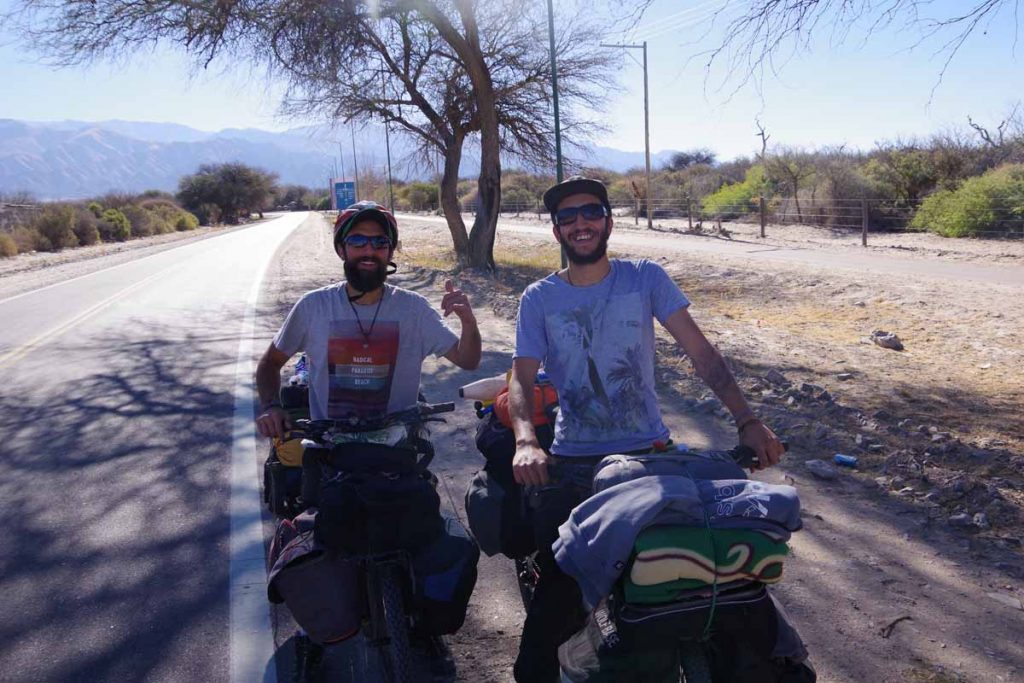 Close to Cafayate, I met these two cyclists from Uruguay. They had started riding in Paraguay and were on their way to Salta. 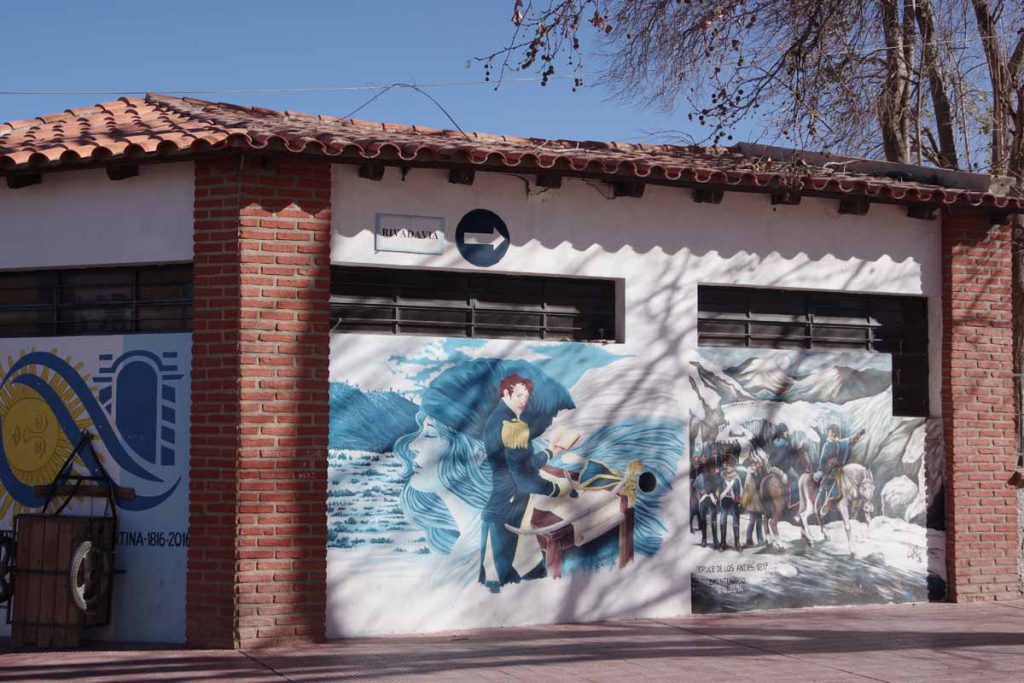 Made it to Cafayate. Mural on the wall commemorating a journey approximately 100 years ago.