Two days cycling brought me from Santa Maria to Hualfin. 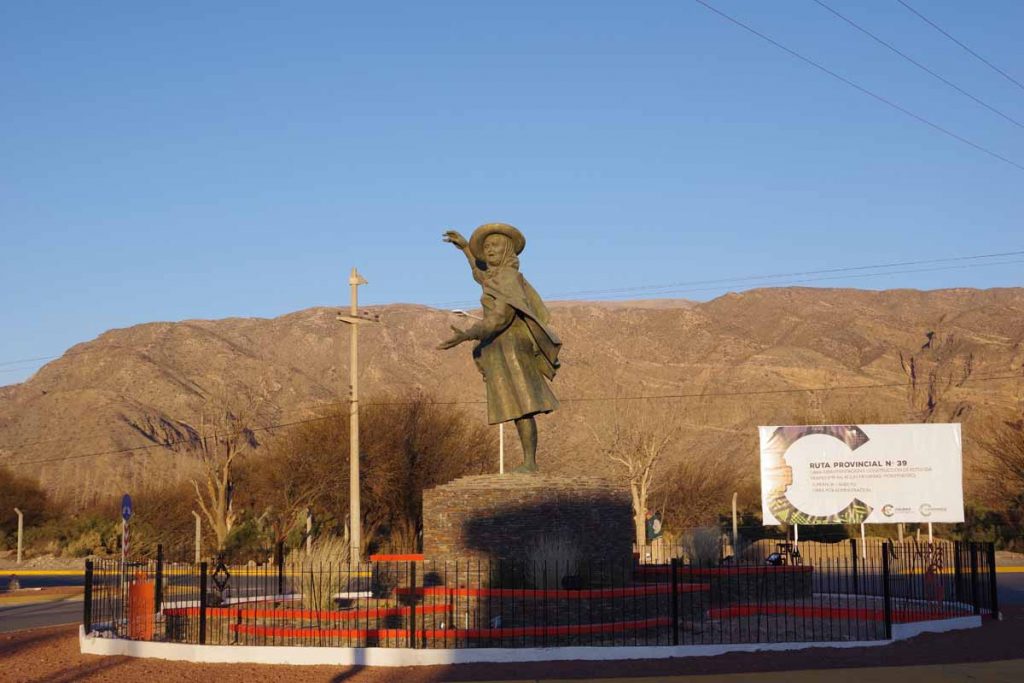 I wasn’t quite sure if I would ride this distance in one day or two. The distance (118km) was further than my normal one-day ride, particularly if there was wind or gravel. However, I also didn’t know of good places to stay, other than an abandoned house at 67km. So I decided I would take things as they came.

As it turned out, I found a great little camp spot and even had pizza for dinner.

I crossed the river and returned back to the main road from Santa Maria and then turned north. This next stretch the road was paved, but seemed to climb over evey little hill. 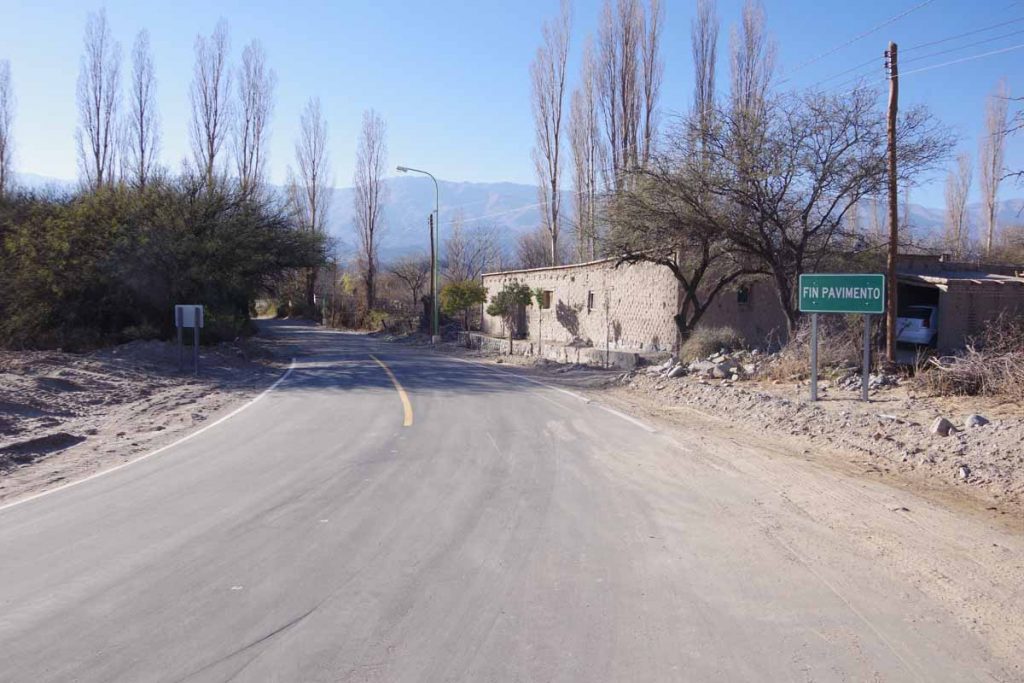 At 24km I came to a sign for “Fin Pavimento” and thought OK, now the fun begins. Fortunately, the section without pavement was only a little over a kilometer. I crossed the river again and found myself with a well-paved section of Ruta 40. Not 100% certain, but I suspect if I had stayed on one side of the river, it would have remained better pavement. 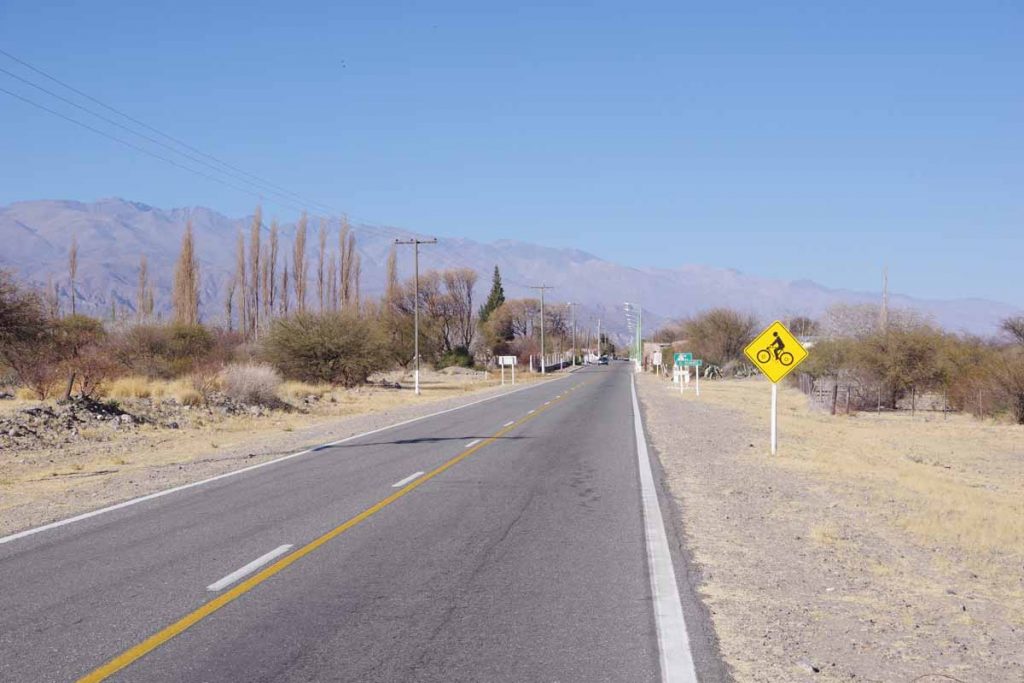 This next section came through several villages, one even with a bicycle sign. It was a bit slow climbing and I wasn’t feeling 100% so I kept an eye out for potential to camp in one of these villages. 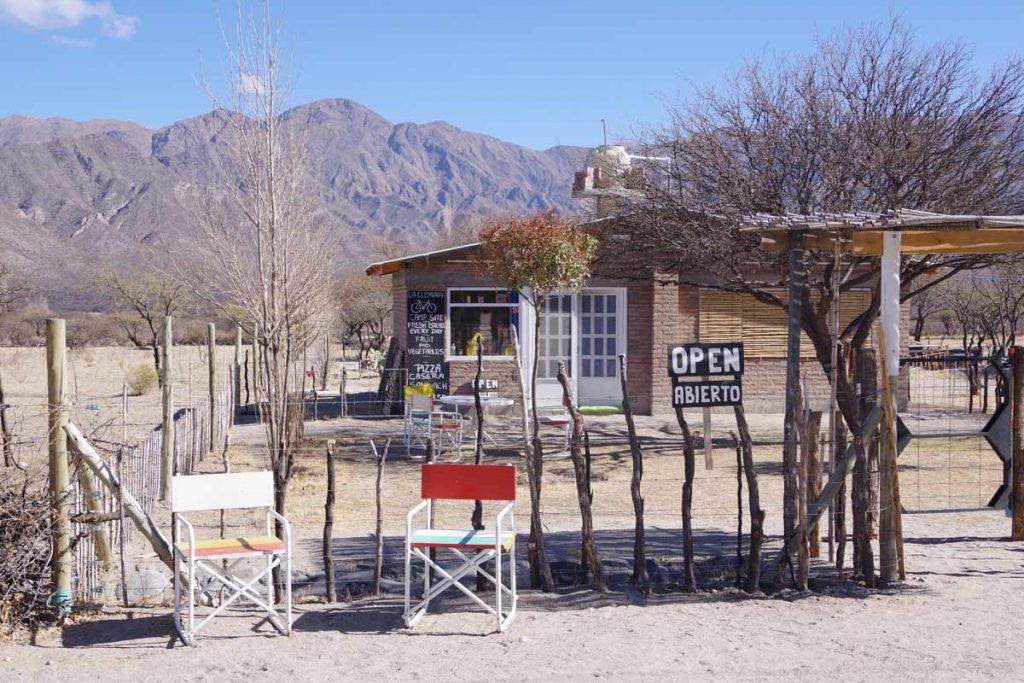 At 35km, I came past this great little shop. The sign had a bicycle on it and said “camping”. Signs for “pizza” and “fresh bread”. What more could a cyclist want? I stopped and inquired and camping next to the shop was free. I had gone far enough that the next day would be a reasonable ride.

So while it was only 11am, I decided to stop for the day. Had a little pie and a while later a second one. Otherwise, got in the tent out of the wind and read and relaxed. 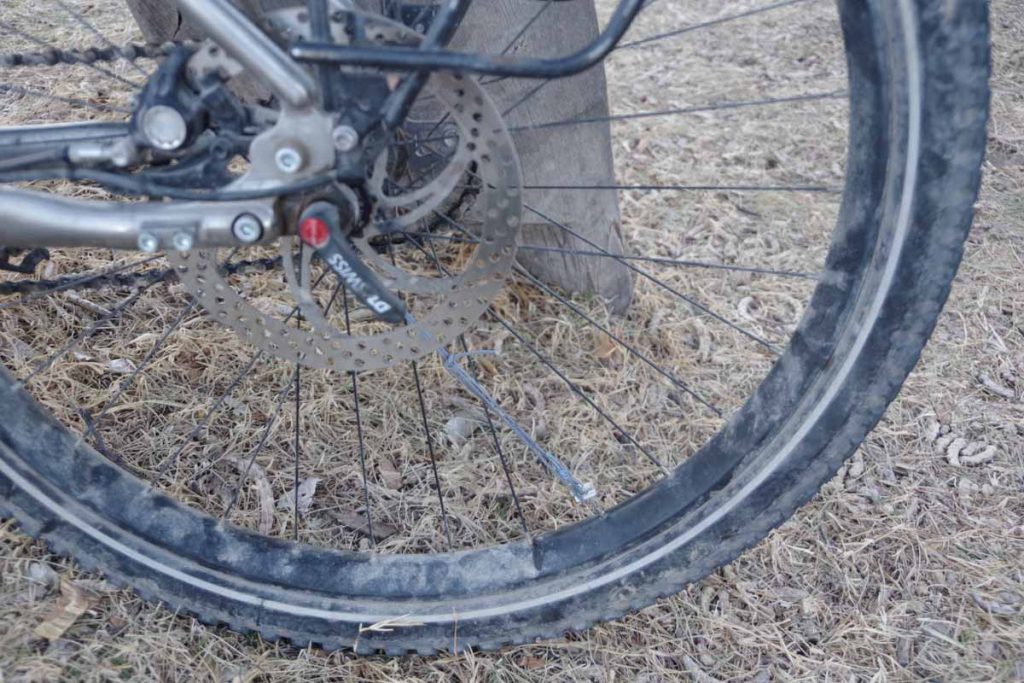 Later in the afternoon, Alex came cycling up and also stayed at same place. He had taken a rest day in Cafayate and cycled to here today. One of his spokes on rear wheel was broken and we didn’t have the right tool to take off the disc brake. I ended up giving him a fiber spoke that he used instead. I’ve carried these things forever and now was first time we could actually use one.

I was a nice evening and we both had a pizza for dinner. By 7pm the sun went down and it became cold. 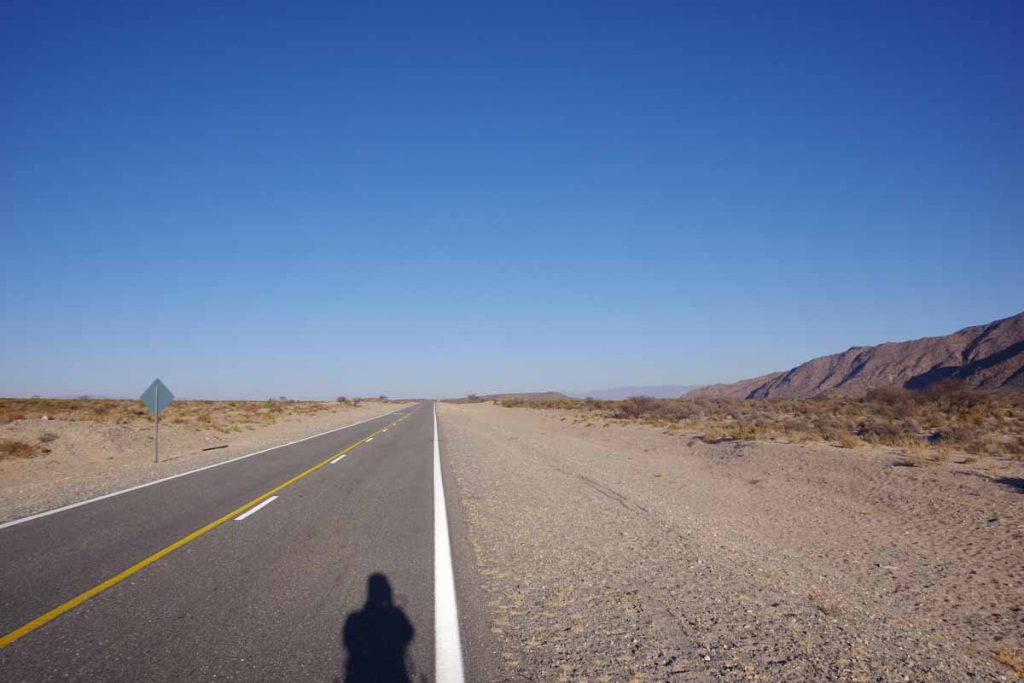 Next morning I was on the road a little past 8am. Once again it was cold (-5C/23F) in part due to the elevation (2150m/7000ft) and it didn’t really warm up until 10am. However, otherwise cycling was good and was particularly pleased by the lack of wind. 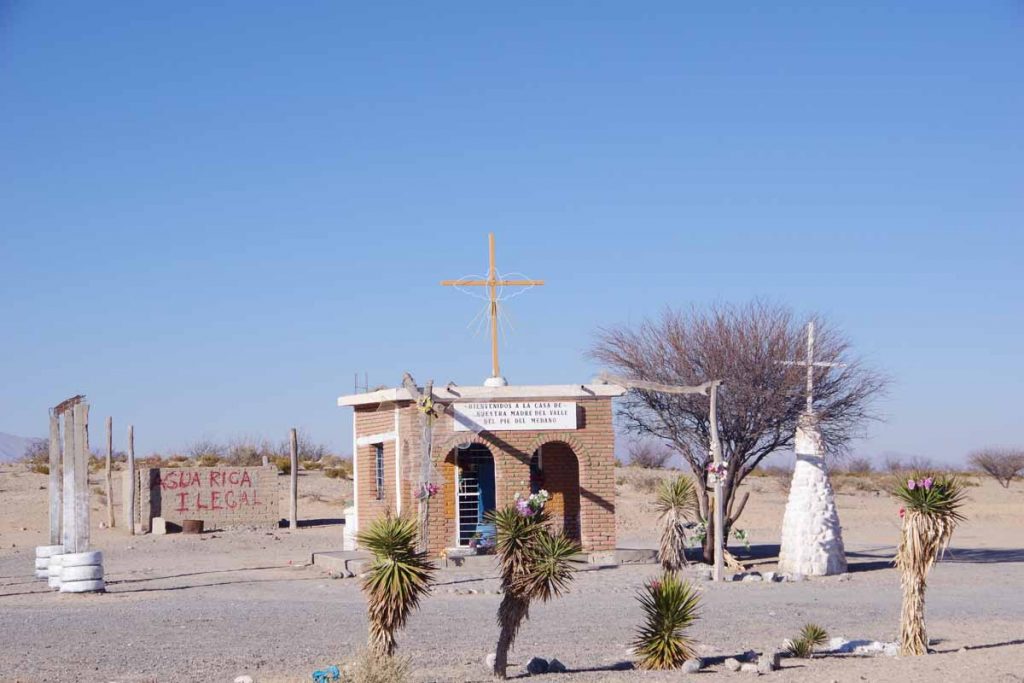 A little church in middle of nowhere. 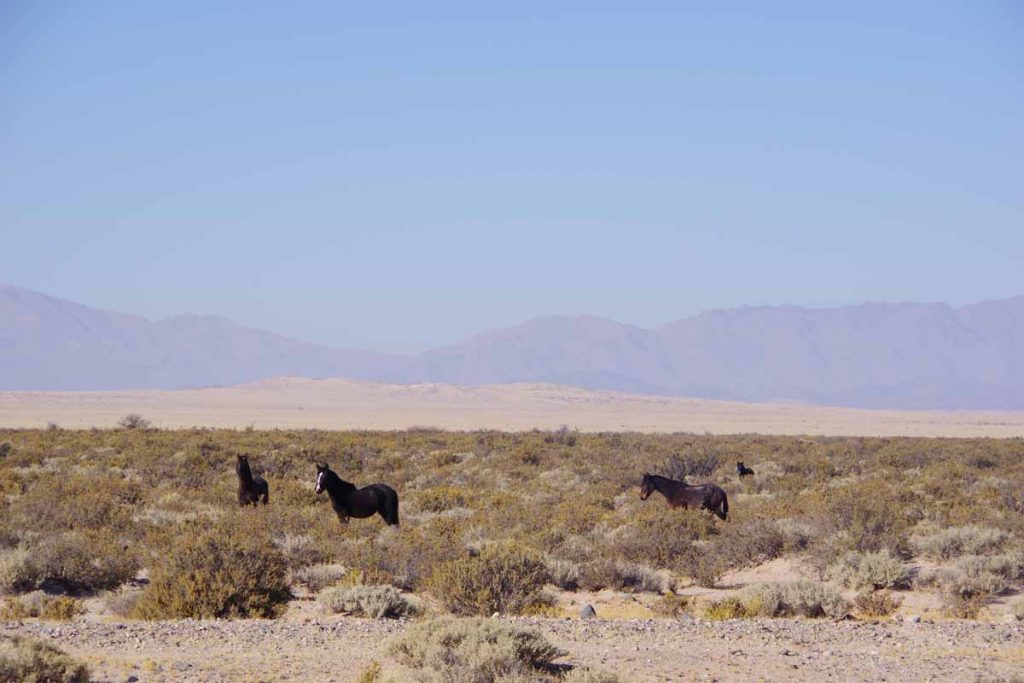 A lot of free ranging livestock including cattle, sheep, goats, horses and one donkey. 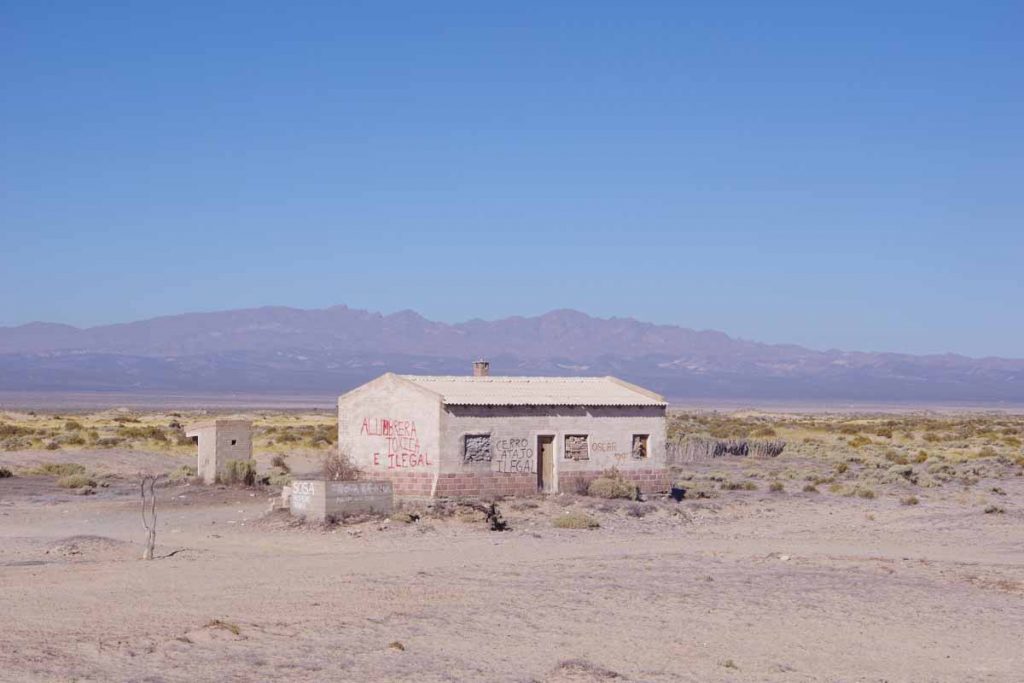 This was the abandoned house in middle of nowhere. Other cyclists had stayed here out of the wind, but I was glad I had stopped at my little bakery instead. 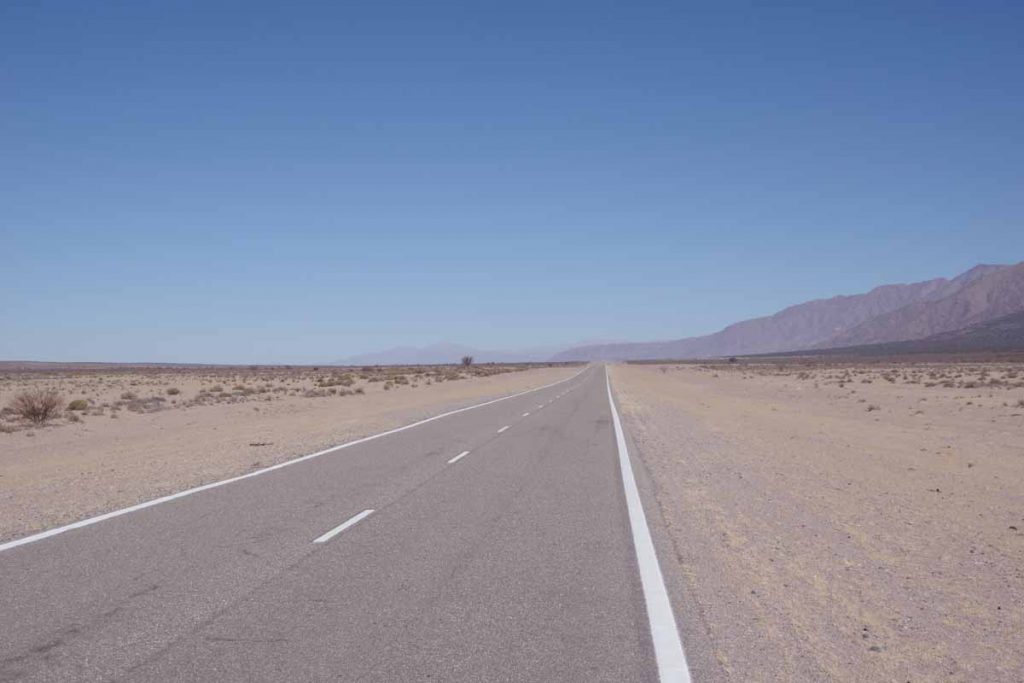 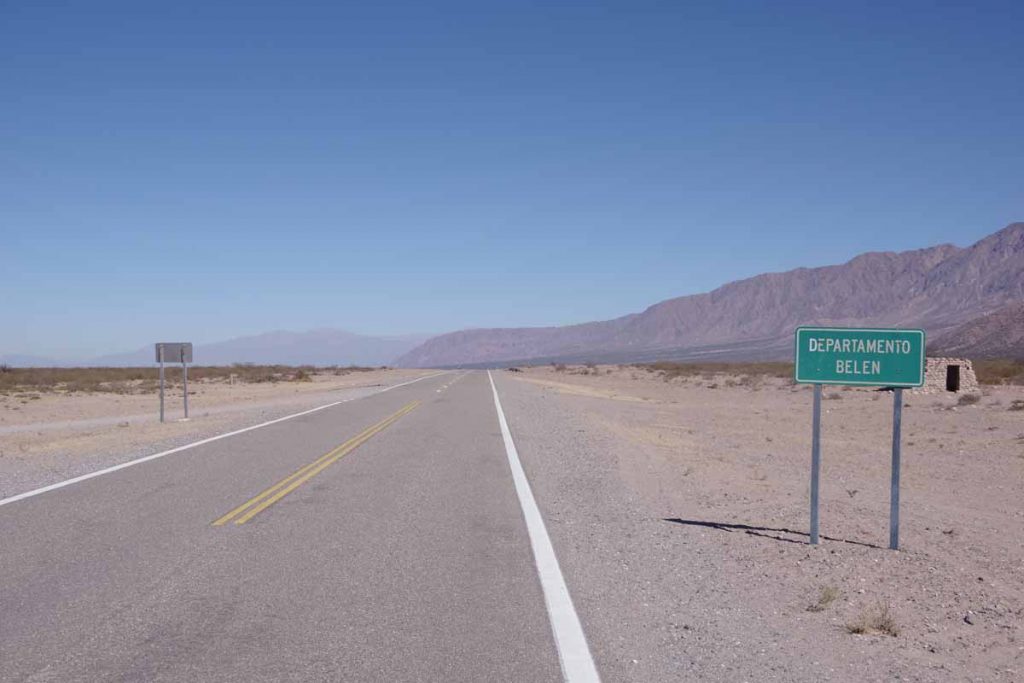 Once I crossed from Santa Maria region to Belen, the road started a reasonable descent. The top was somewhere around 2300m/7600ft and highest point I will reach for a while. 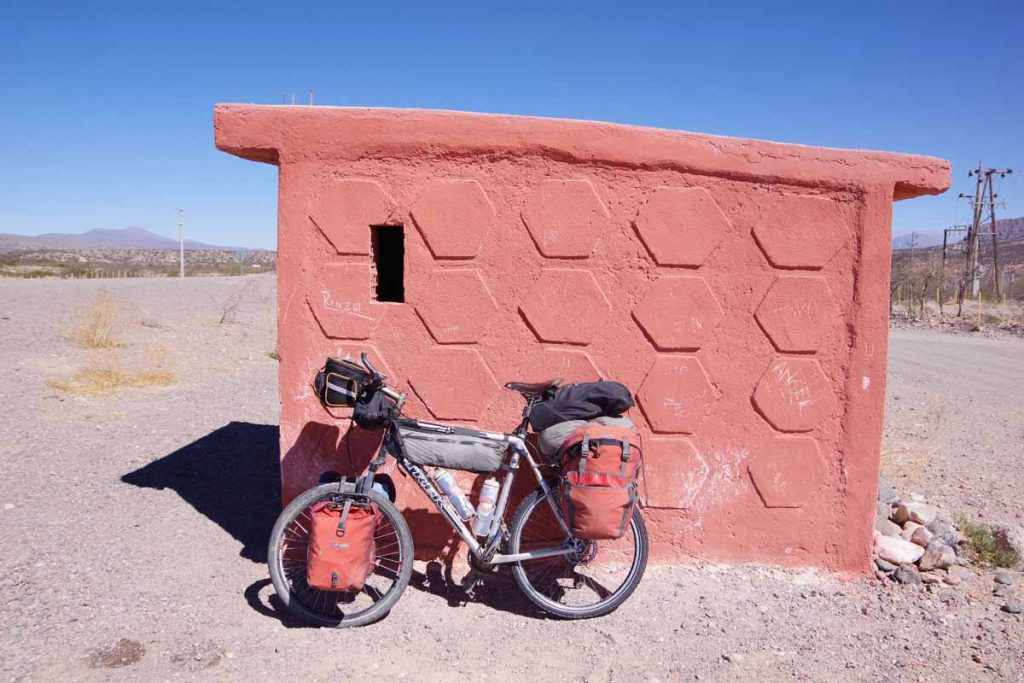 On the way down, my rear tire went flat. There was a weird hole in the sidewall near the valve stem. I decided to swap out the rear tire instead. I’ve now used all my spare tires, though I still have both that I swapped out. One in Peru where I kept getting flats and this one with the sidewall. Hopefully don’t need to use either again until Puerto Montt. If I can find Schwalbe Tires in Mendoza then I’ll pick new ones up there, otherwise may be part of a trip back to the US before I start the TDA riding in Puerto Montt.

After this not too much further into small village of Hualfin. The first 2km into town were gravel and after that some quiet streets. I haven’t found much of a commecial center, but did find a nice little hostel. Also a chance to figure out next places between here an Chilecito.