Two longer days riding through sparsely populated areas have brought me to the small town of Zapala where I will also take tomorrow as a rest day.

Day One – Chos Malal to overlook roadside camp
Nice cycling day with three longer climbs and a lot of open scenery. It was drier again and I saw fewer little creeks in the drainages I crossed. 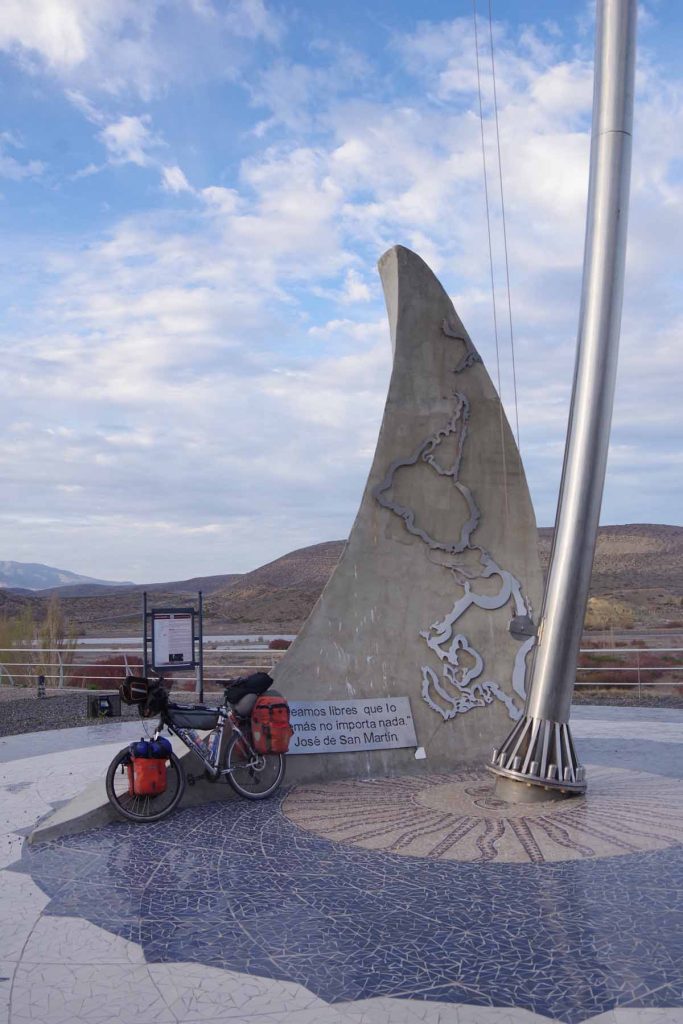 A few kilometers outside Chos Malal was a police checkpoint. They seem to have these occasionally and typically wave me through. However, at this one, I showed my passport and they carefully recorded both my name and passport number.

Just past that was the monument shown in the photo above. It marks the half-way point for Ruta 40. I have mostly followed this route from Cafayate (two days cycling past Salta) until now. Ruta 40 actually starts at La Quaica where I entered Argentina and swings west through higher elevations. It ends just on the southern border with Chile. It is a great cycling route skirting the Andes mountains just on the east side. 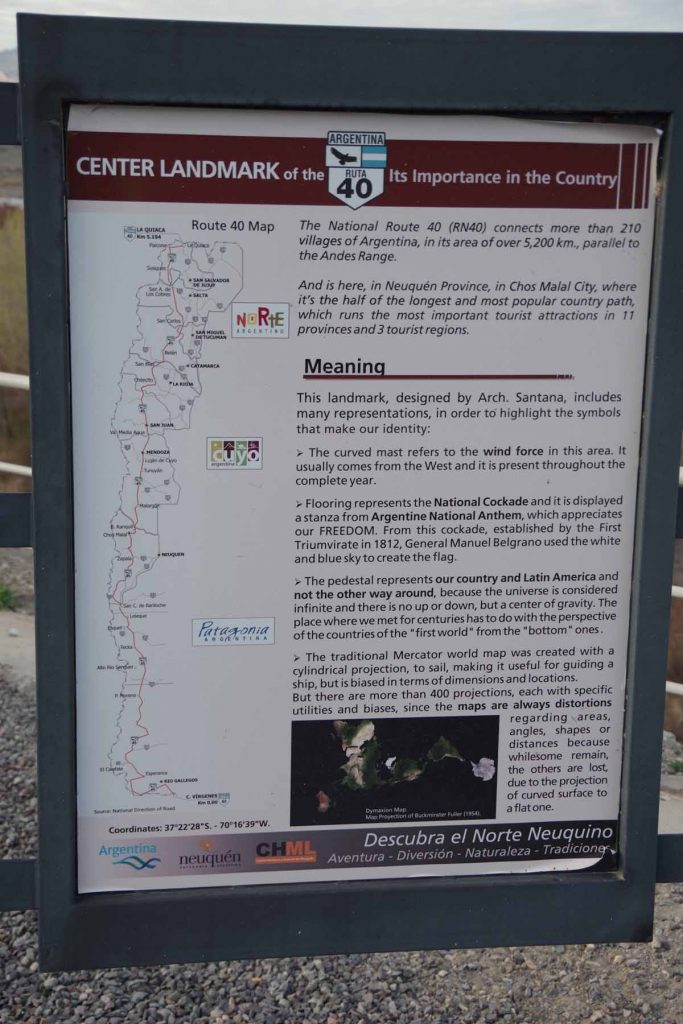 Here was the sign in English at the monument. The tall curved item in the first photo as a curved flagpole where the curve represents the strong and persistent winds found in the area. 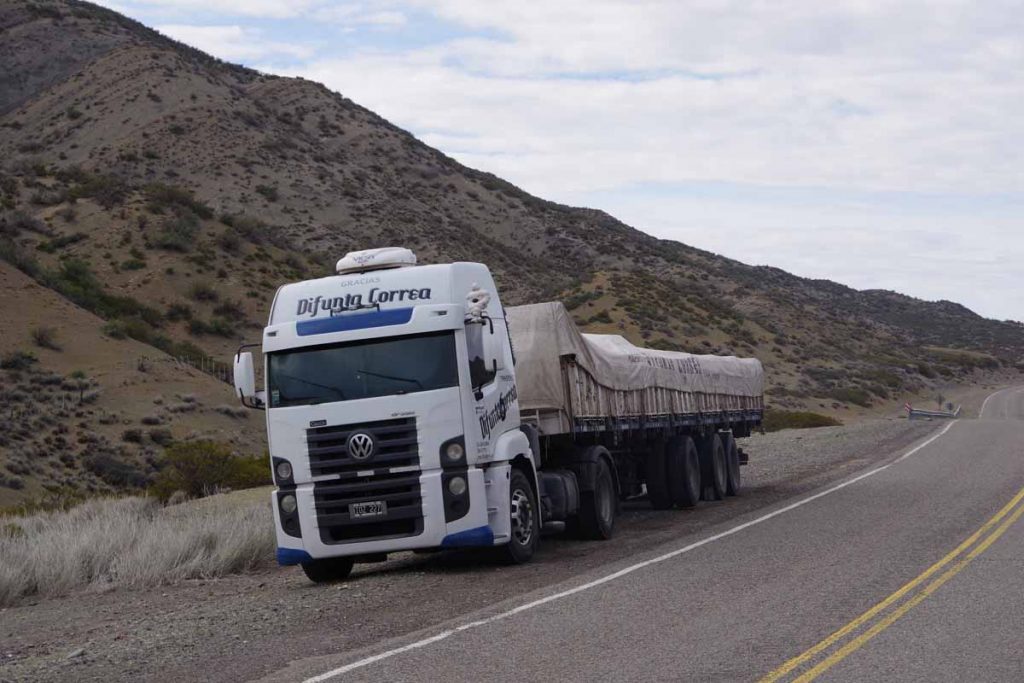 On the first climb, I came past this truck with a gracias to Difunta Correa. I normally see this reference in roadside shrines. 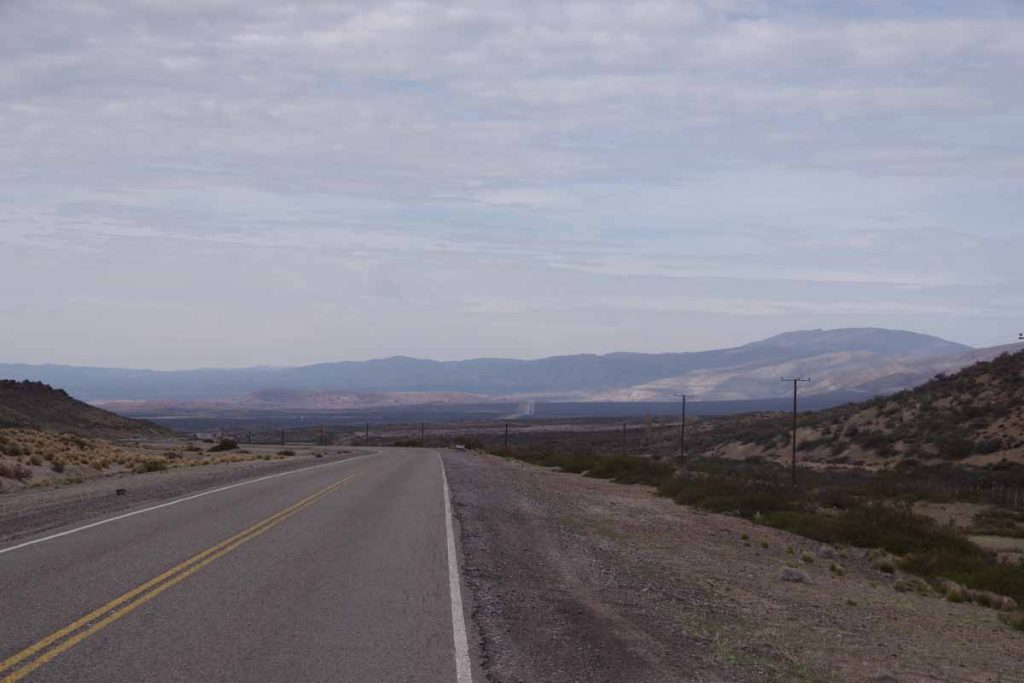 After the long climb, one could see views of the valley ahead. Down across this valley and then another slow climb brought me to a potential camp point near 75 kilometers. However, the day was going well, so kept going and even had a light tailwind. 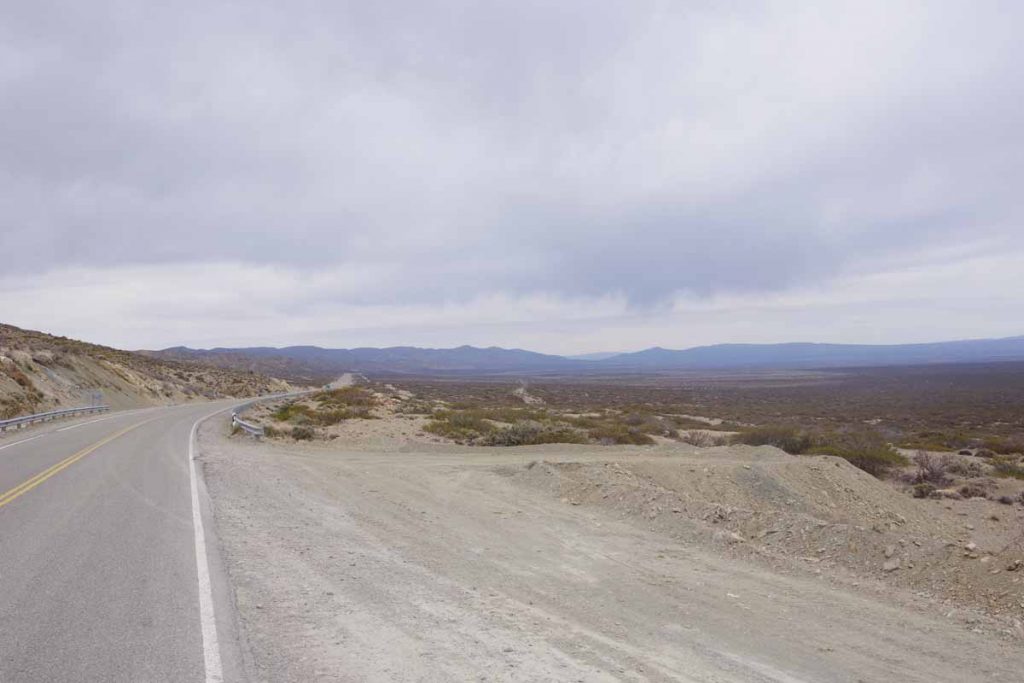 Looking down from the second climb. 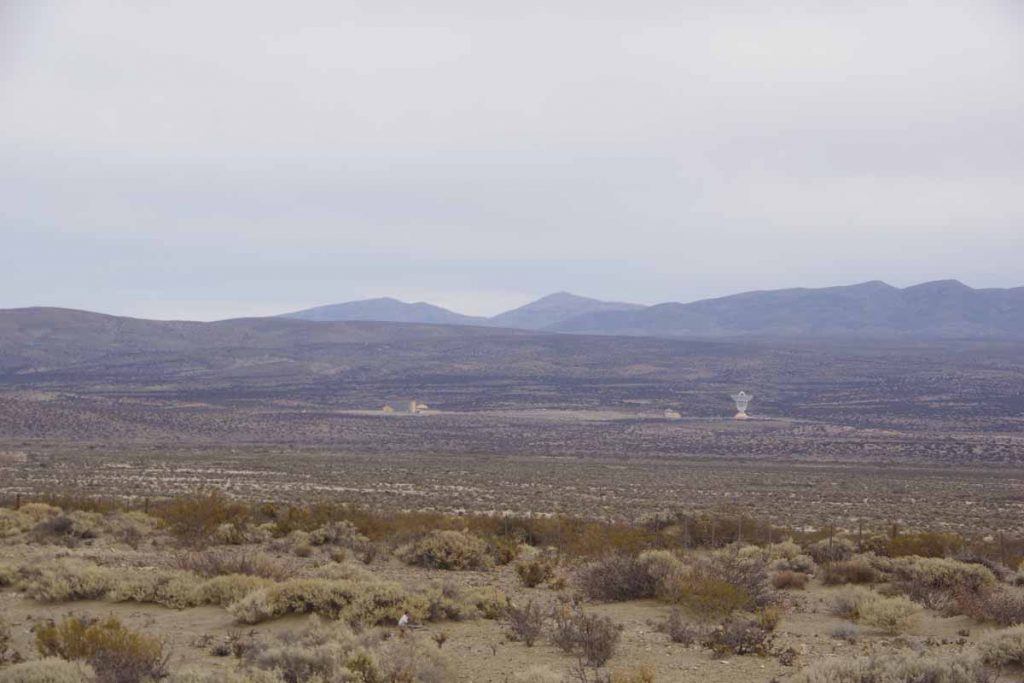 Large radio telescope in the distance.

At end of the day was a slow climb up a hill. I saw a very small newborn goat near the road. The mother had scampered away so now the small goat had to find her again. No photo since I figured it was better to get them reunited.

Just off the road was a great little campsite. It was close to the road but hidden behind a small hill. There was a view into the valley below. The wind kicked up once or twice overnight but overall was still reasonable.

Day Two – Overlook roadside camp to Zapala
Today had a weather system moving through with a few showers and brief but strong winds. 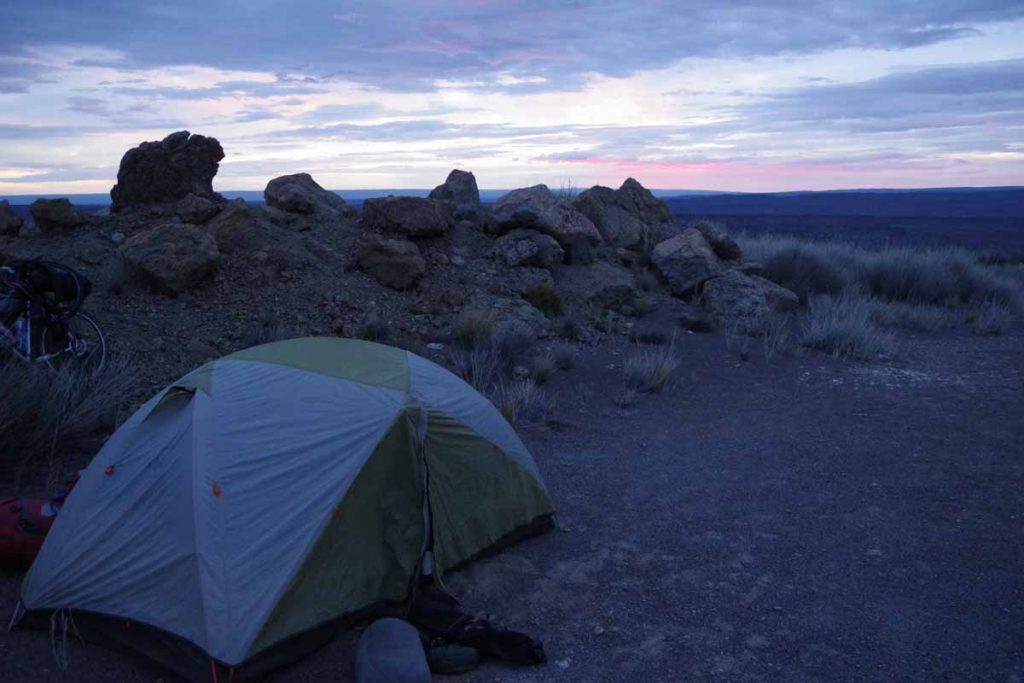 Near sunrise at my small overlook camp. 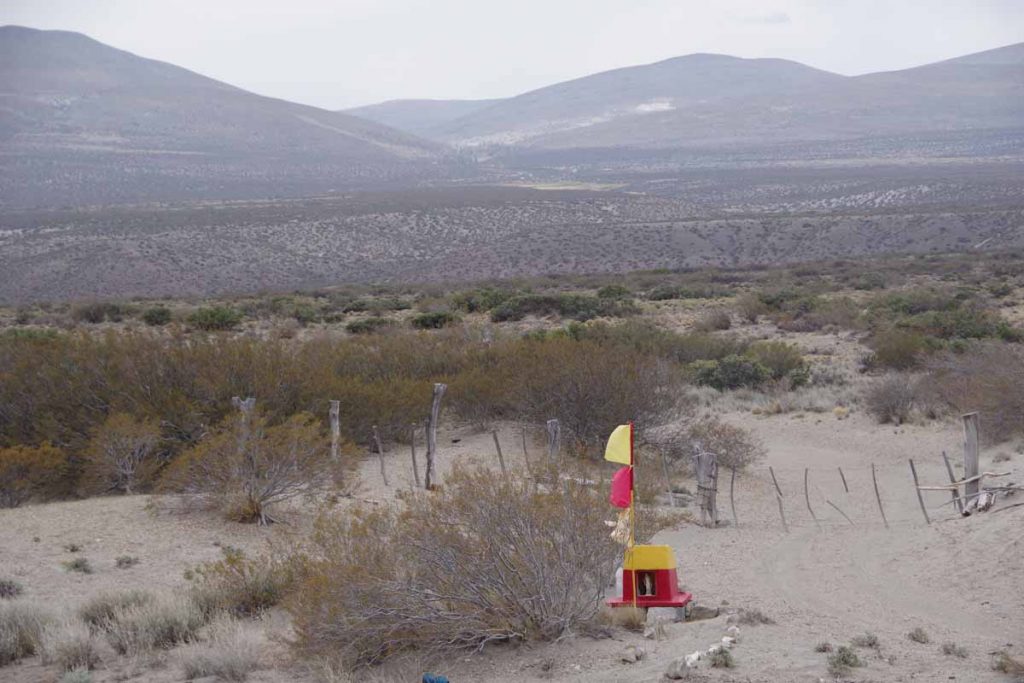 The first 40 kilometers the route turned slowly to the west. Unfortunately, this meant I had a light headwind.

A little past this point it started to rain and the wind picked up. The wind kept getting stronger and I stopped to put on my rain jacket. It was a slow steady slog against a strong gusting wind driving rain hard enough to sting. Almost as quickly as the squall had picked up, it then subsided as well. 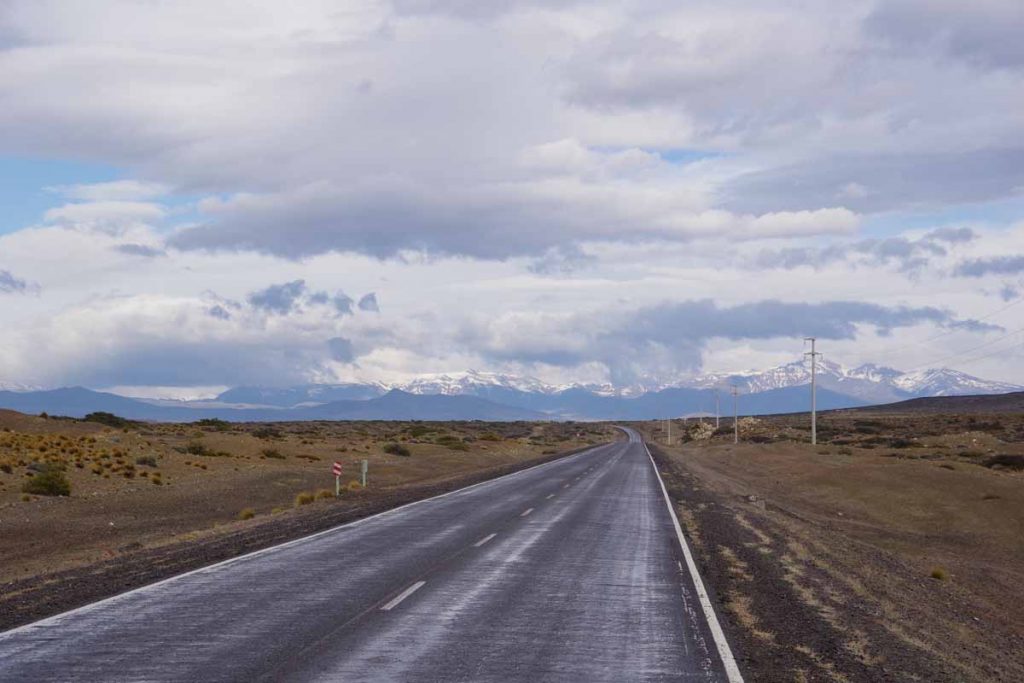 The clouds lifted, the sun almost came out and looked much brighter than just fifteen minutes before. 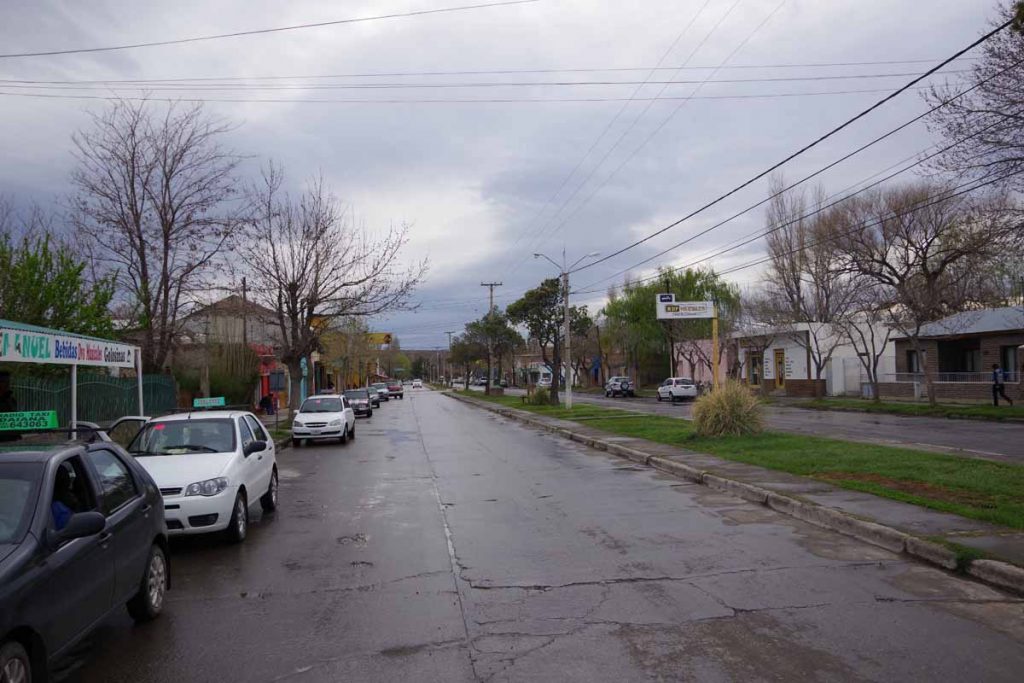 At 40 kilometers was the small town of Las Lajas. It had a municipal campground with good reviews and the small main street shown above. However, since the road turned to SSE, I also expected some nice tailwinds that could help push me another 56 kilometers to Zapala. 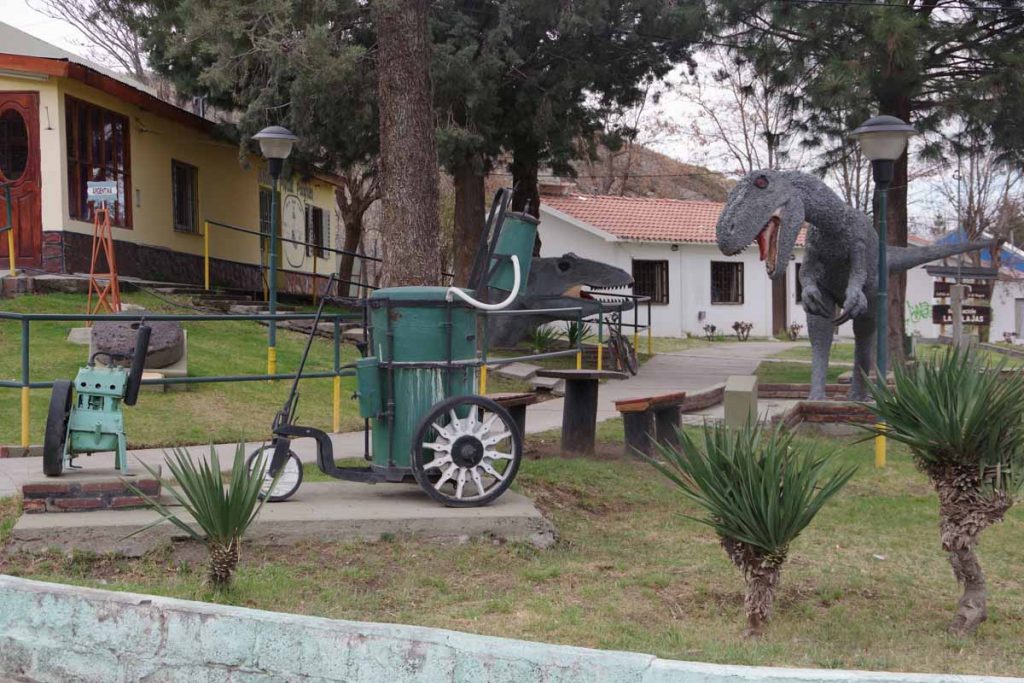 The museum on edge of town had dinosaurs outside.

The road became busier between Las Lajas and Zapala. Some may have to do with there being small towns. In addition to the west is one of the crossings between Chile and Argentina. Cars and trucks mostly had Argentina license plates, but these might still have visited Chile. 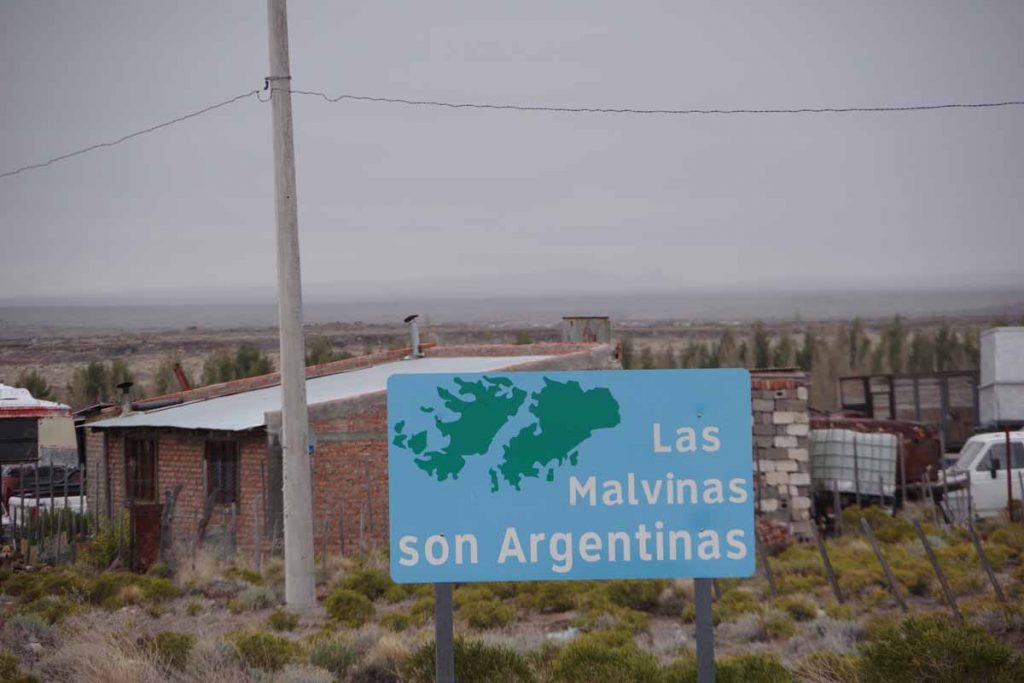 Another rain squall as I came to Zapala with its Las Malvinas sign. 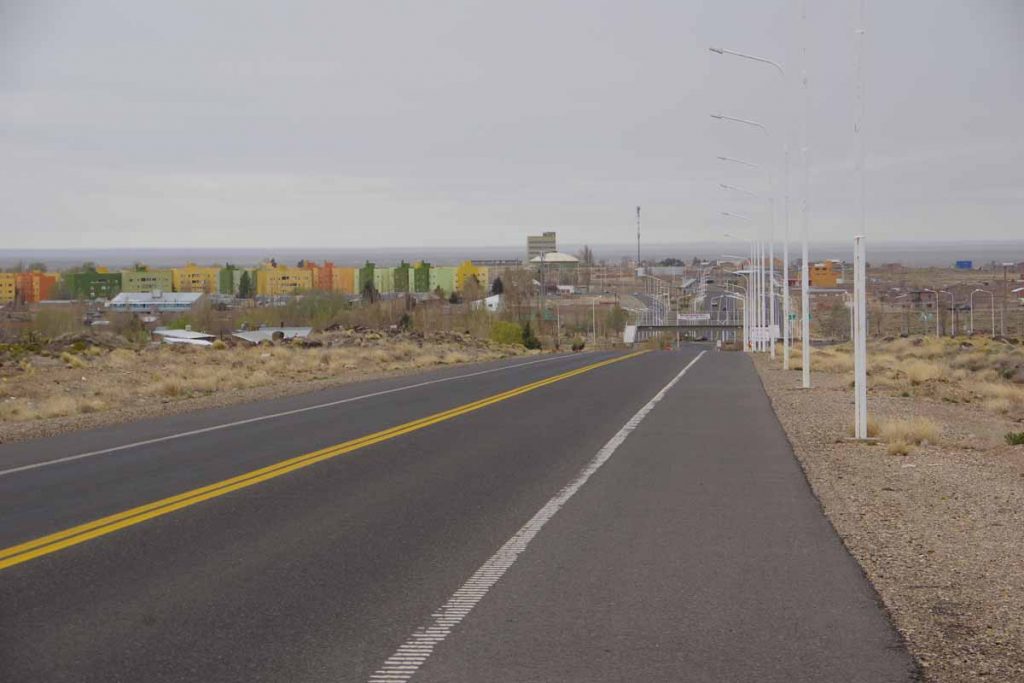 Here was an entrance to the town. I saw four road cyclists on my way in. Otherwise found a reasonable hotel not far from the bus station. This is the largest town for a while and I decided to take a rest day as there will be some larger gaps again between here and Bariloche. The weather forecasts are a bit more volatile for next few days so want to tackle these gaps with fresh legs.