Completed writing up my equipment list. A copy is here.

Some things make this easy: (1) I’ll be able to mail things home or buy along the way if necessary and (2) I have previous lists from cross continent trips: across Canada, around Australia, across Russia and across Africa as well as from others on the web.

However, there are still a few areas I’ve hemmed and hawed trying to get just the right contents. An initial area of concern is the start of the trip from Prudhoe Bay. Here I need to bring enough warm clothes and sleeping bag for perhaps the coldest part of the ride. I also need to carry enough food as services are limited the first 10 days of cycling. First place to otherwise get a meal is Coldfoot after 240 miles and only a few places after that. At the same time, a lot of road is gravel and I’m concerned starting out overloaded and perhaps not as good shape as I’ll be later in the trip.

As a result, there are two things I’m going to try doing: (1) send a package to Fairbanks with items not needed right at the start and (2) start with a tablet instead of PC. The latter choice came as I realized there wouldn’t be a lot of places to recharge the laptop as well as that “The Milepost” has a tablet edition that loads entirely on a tablet.

Another choice that is different from past rides is I’ll start with a Primus multifuel stove. When I did the Dempster Highway 20 years ago I had a stove that I didn’t use much despite the sparseness of that road. After that I pretty much relied on a “no cook” approach though did end up with a small ISO butane stove on my Russia ride. So I’m revisiting that choice from 20 years ago, at least given remoteness of the road as well as Great Divide coming up, though I might switch from gasoline to ISO Butane when I can since that burns cleaner.

Other than those two differences, a lot of similarities with packing lists I’ve done before.

Today I picked up my Trek 520 bicycle from Mello Johnny’s bike shop. 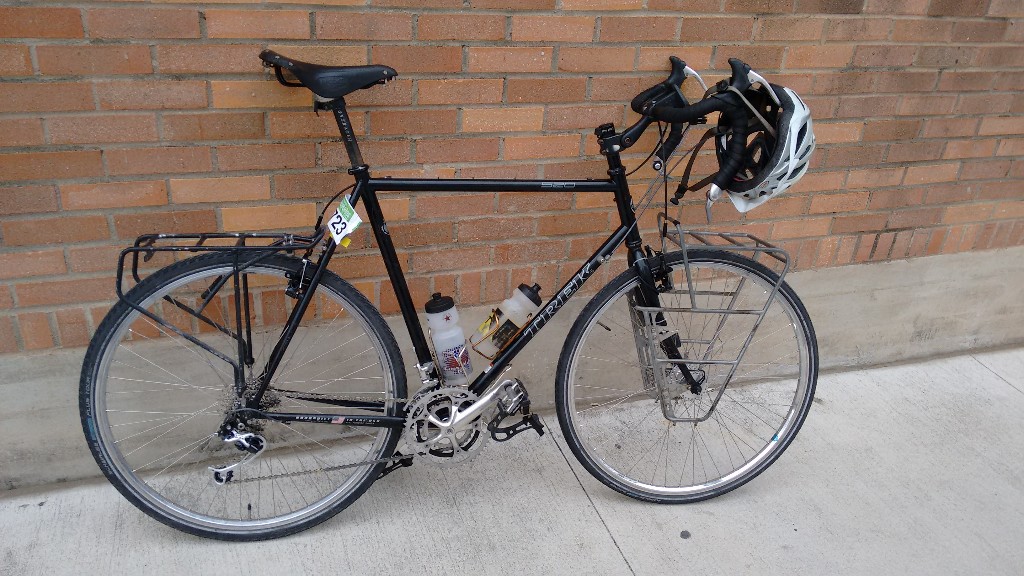 I’ve decided to refurbish/retrofit my existing bikes rather than start with a new one. The wheels were already new from my wheel building class. However, the rest of the drive train was well worn. For example, they told me the derailleur pulleys had as sharp teeth as they’d seen and I knew the rear derailleur wasn’t quite shifting down any more. I also ended up replacing bottom bracket, middle chain ring and my chain as well as putting in a new cassette.

One new toy that went with my dynamo hub in front was a USB port that threaded through the top tube. Hopefully this holds up well as would be nice to charge some USB devices on the road.

Overall was pleased with how the retrofit went and took a weekend 75 mile round-trip overnight ride down to San Marcos to try everything out. This bike has perhaps ~15,000+ miles on it and overall was pretty comfortable ride across Russia so happy to retrofit it again.