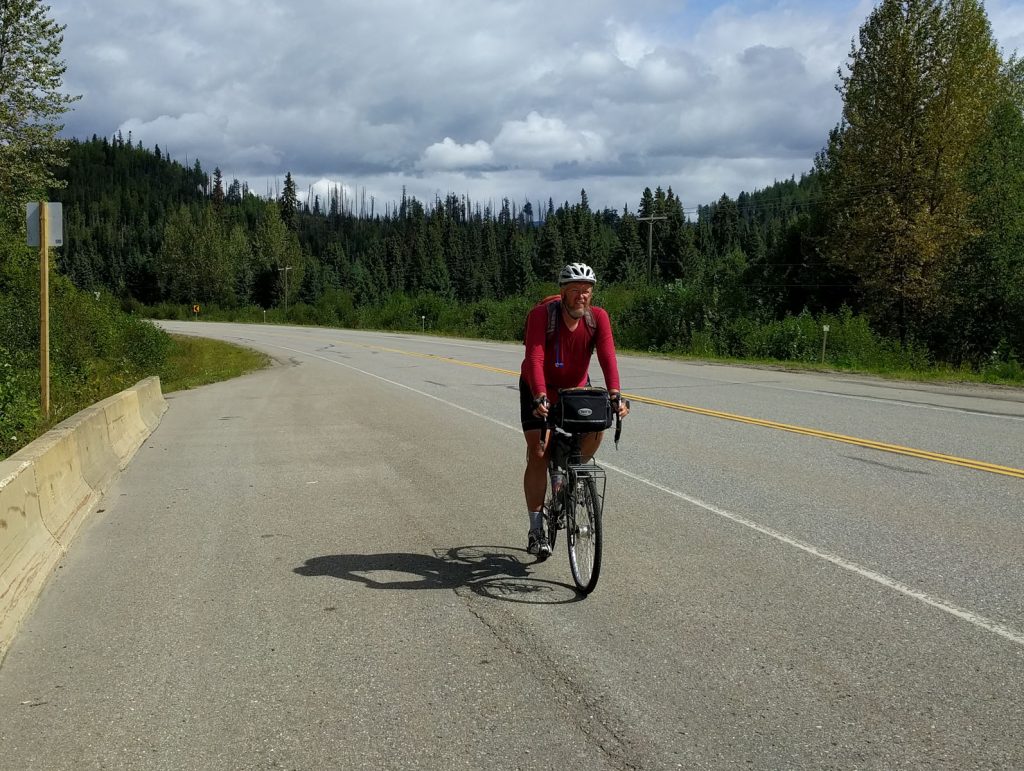 Two days cycling brought me to McBride. I met my brother Bert at end of first day and hence cycled w/o gear on the second day. 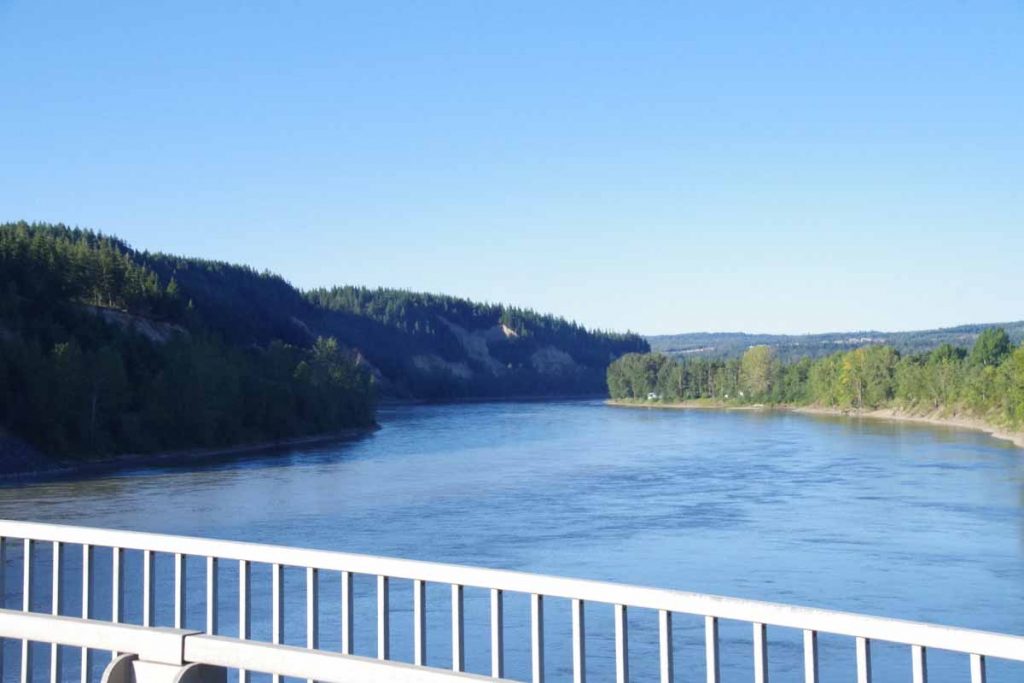 First day was only 63km but with full gear. At 3km I crossed the bridge over Fraser River and started a gradual climb. There was a “no hitchhiking” sign on other side followed by a correctional institute. At 6km was a Petro Canada station and last chance to get a few things before sign below – 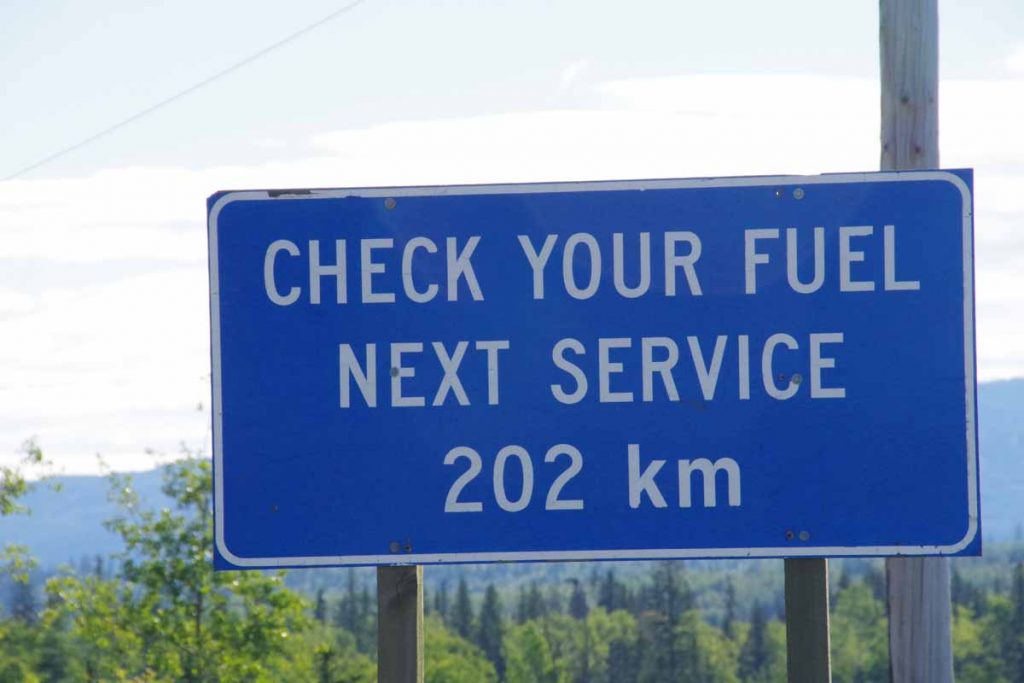 The Yellowhead had good shoulders all the way to McBride and less traffic than I had seen west of Prince George. As I left town I came past several cross country ski areas as well as some local hiking trails. 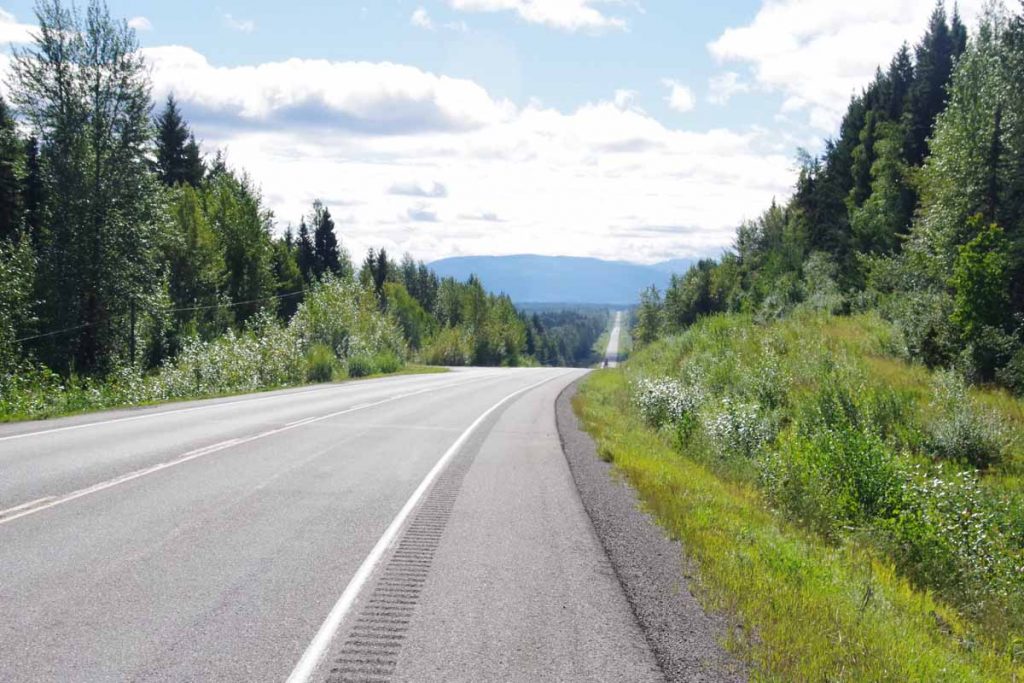 I stopped at a rest area by the Willow River and also found a monument to eight teens who had lost their lives in a canoeing accident. 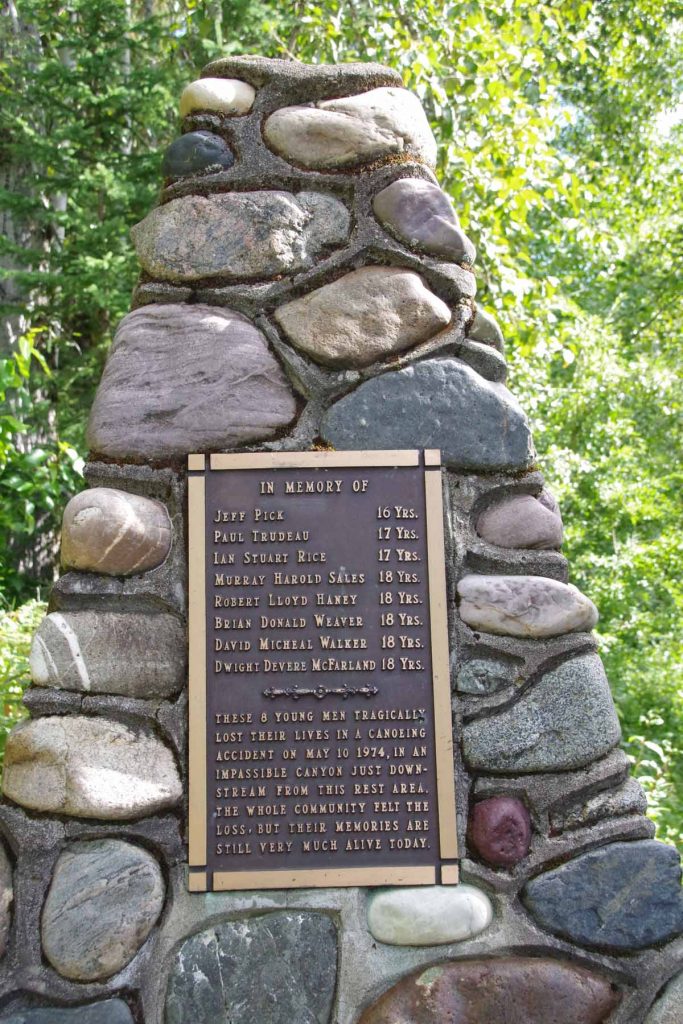 After this mostly rolling terrain as well as some signs warning of wildlife, though I didn’t see much wildlife. 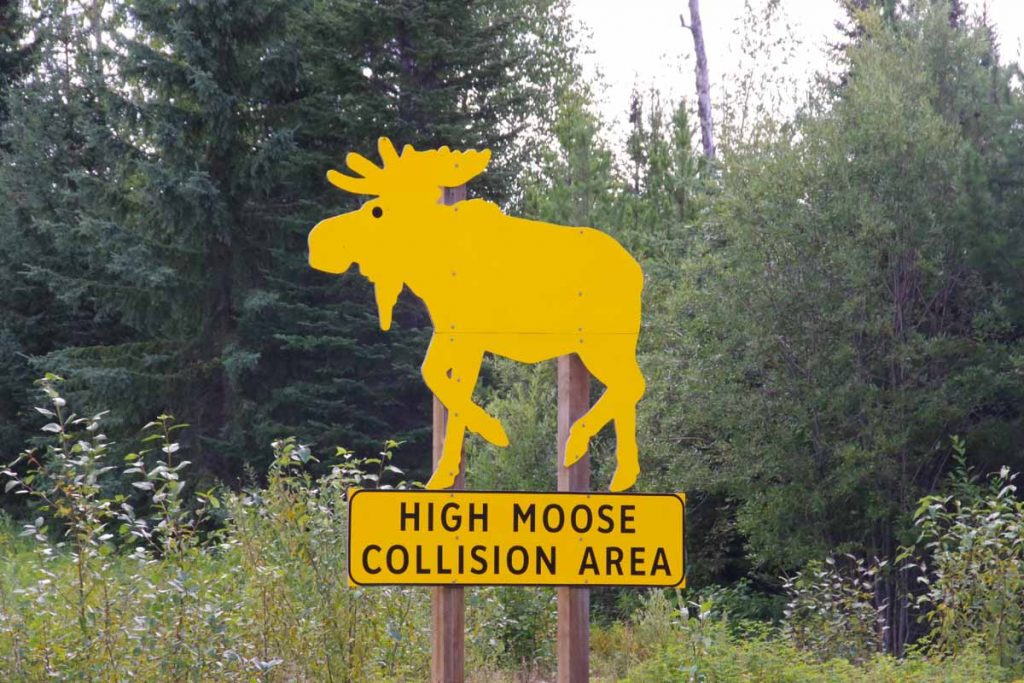 At 63km was Purden Lake Resort. Even before I got there they had put up signs taunting “homemade bread”, “pie”, etc. However, the cafe is only open Thursday to Sunday so everything was closed. I was able to get a camp site right next to the lake. 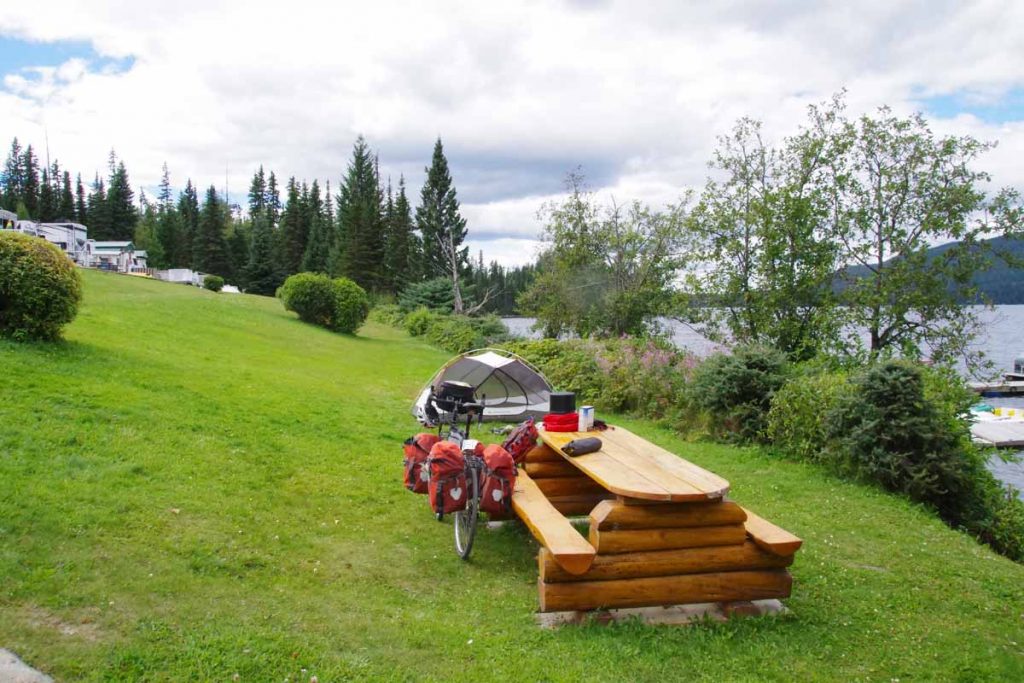 This resort appears to cater to those from Prince George (45 minutes away, everything seems to get described in minutes) – some of whom put together semi-permanent looking RVs with balconies, sheds, etc and then have a place in the country to visit or even live.

In afternoon, Bert came by. Appreciate his driving all this way with my mountain bike so we can do the swap from touring bike to mountain bike. Below are two photos of my bike on the second day. The “before” shot – 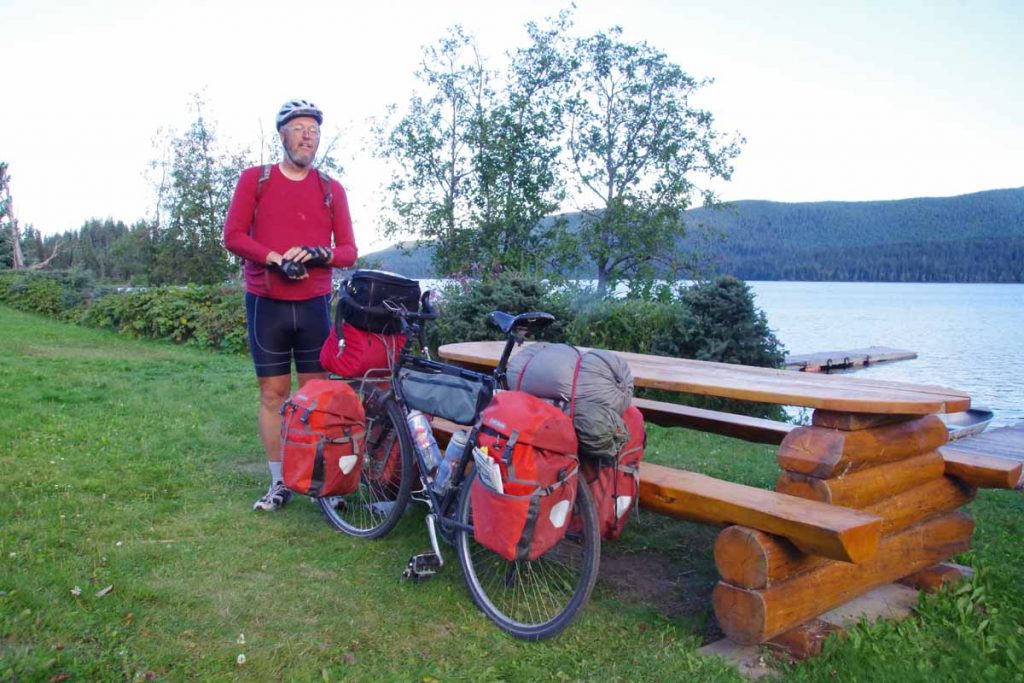 and the “after shot” 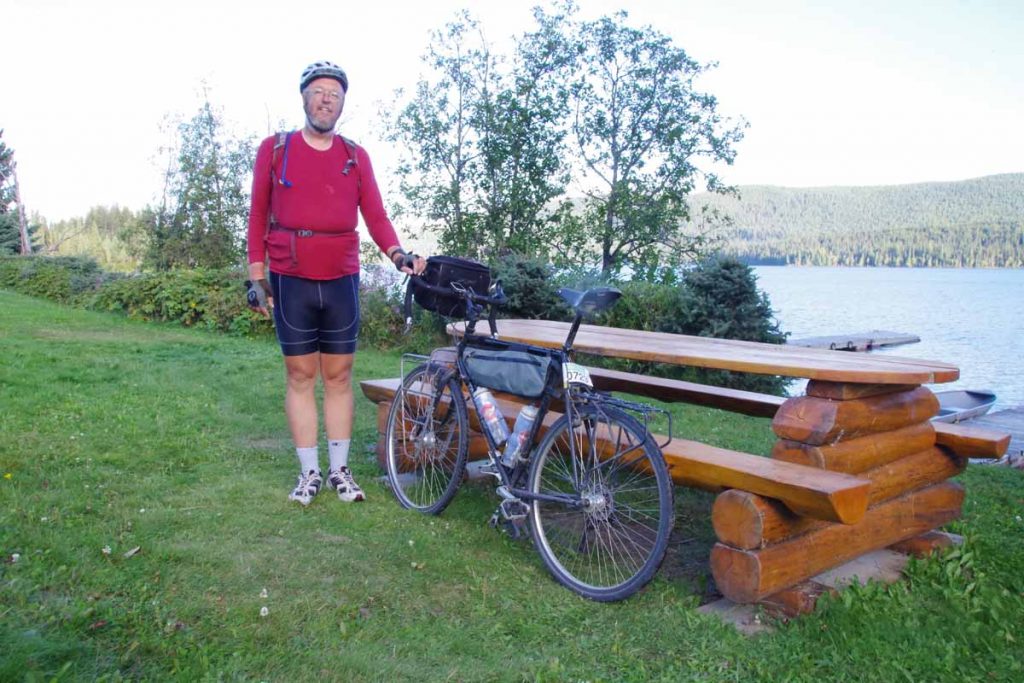 Yup, with Bert’s SAG help, I could ride without my gear for a day. Bert drove a ways with the car, cycled back to meet me and then we cycled a bit further before he went back to the car. Much appreciated.

It wasn’t very cold overnight and next morning I was on the road shortly past 7am. It was nice cycling without my extra gear and I made it 47km before I met Bert coming back the other way. On the way were some short hiking trails such as the one below. 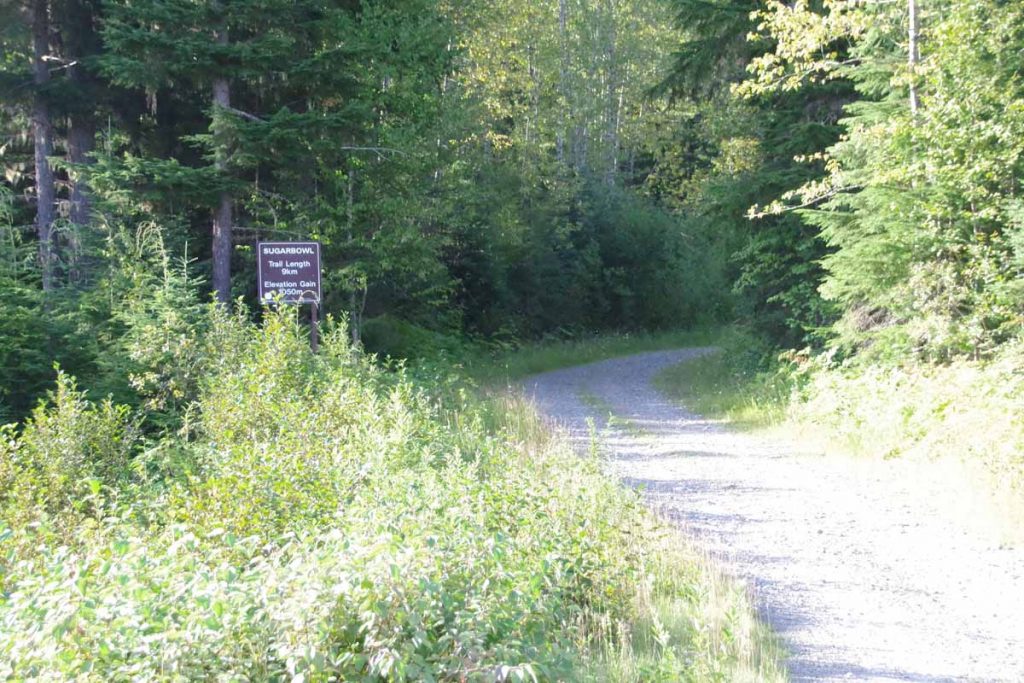 We met at a nice rest area at Slim Creek where they had also decorated one of the bear proof containers. 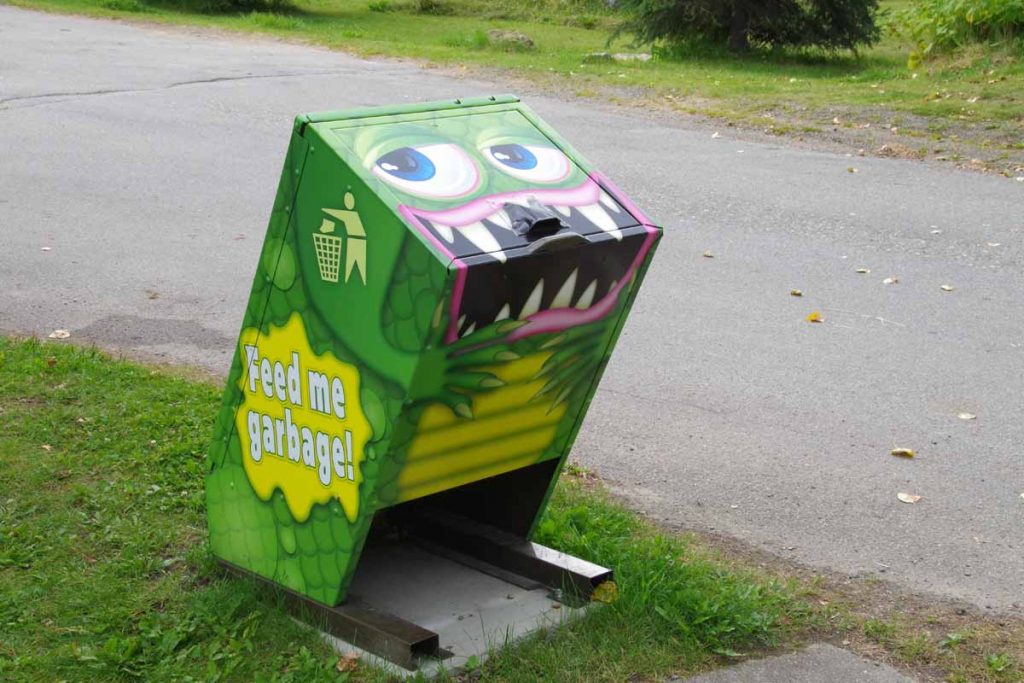 After that there the route had a good share of hills. Also some more distance scenery. 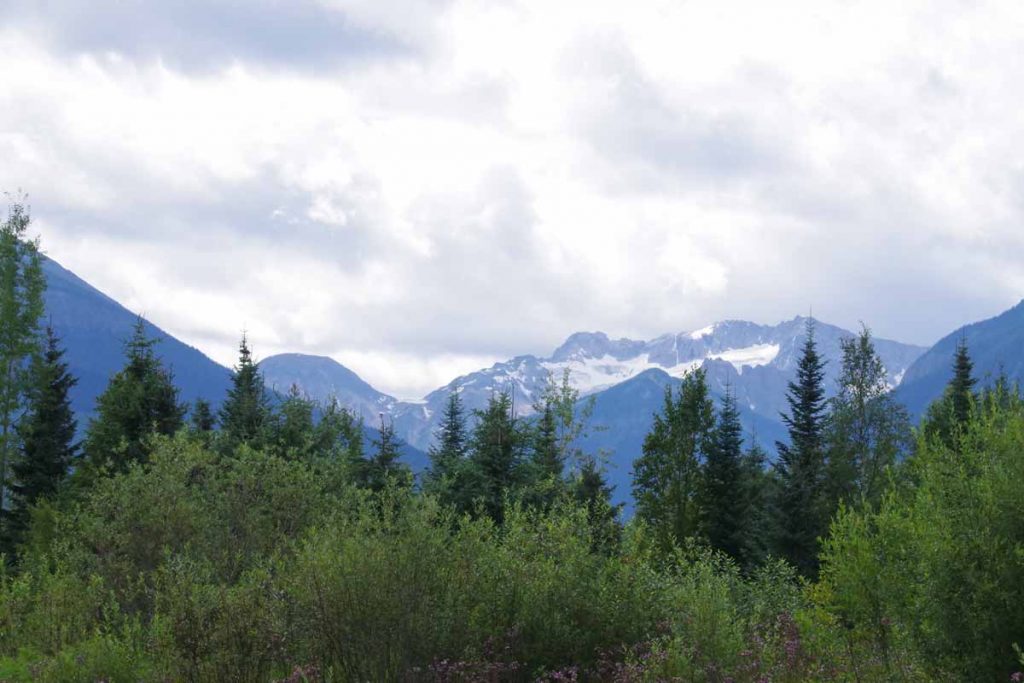 It was a somewhat longer ride, 147km total and this brought me to small town of McBride. Seems to be a bit of a ranching town. 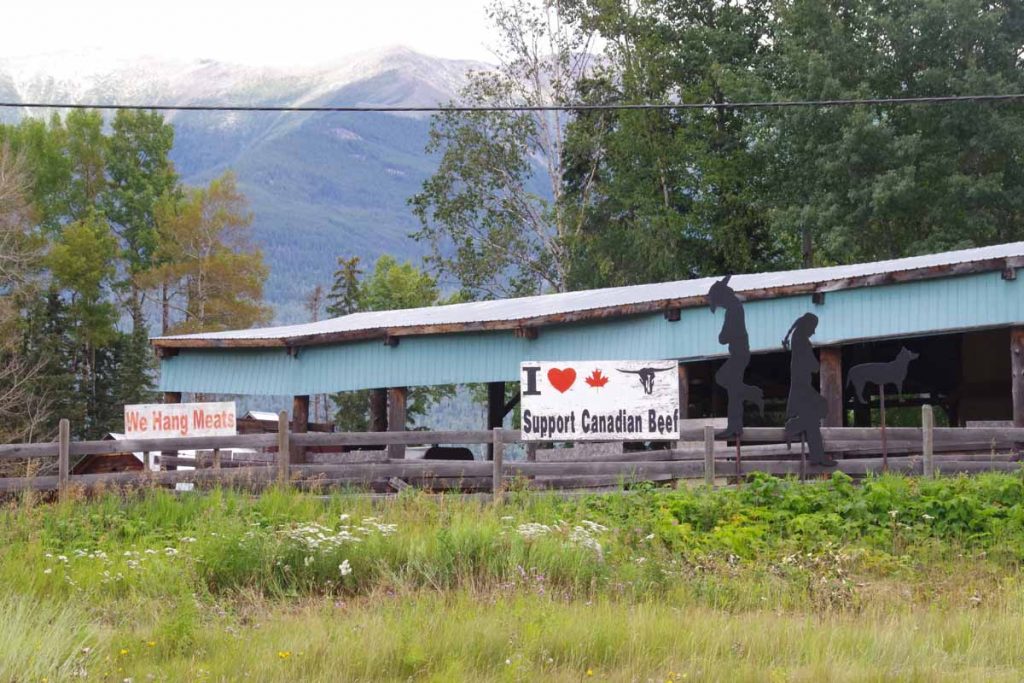 It was nice to finally see the services sign.

Tomorrow expect a shorter ride and also a chance to try my mountain bike riding from here (unloaded). After that will be loaded again…