One tough day, one fun day and one easy day have brought me 110 miles further to Elkford, BC. It was a good introduction to the Great Divide Mountain Bike Route (GDMBR) and I can see that I’ll do a hybrid approach, riding GDMBR sometimes and paved roads other times. 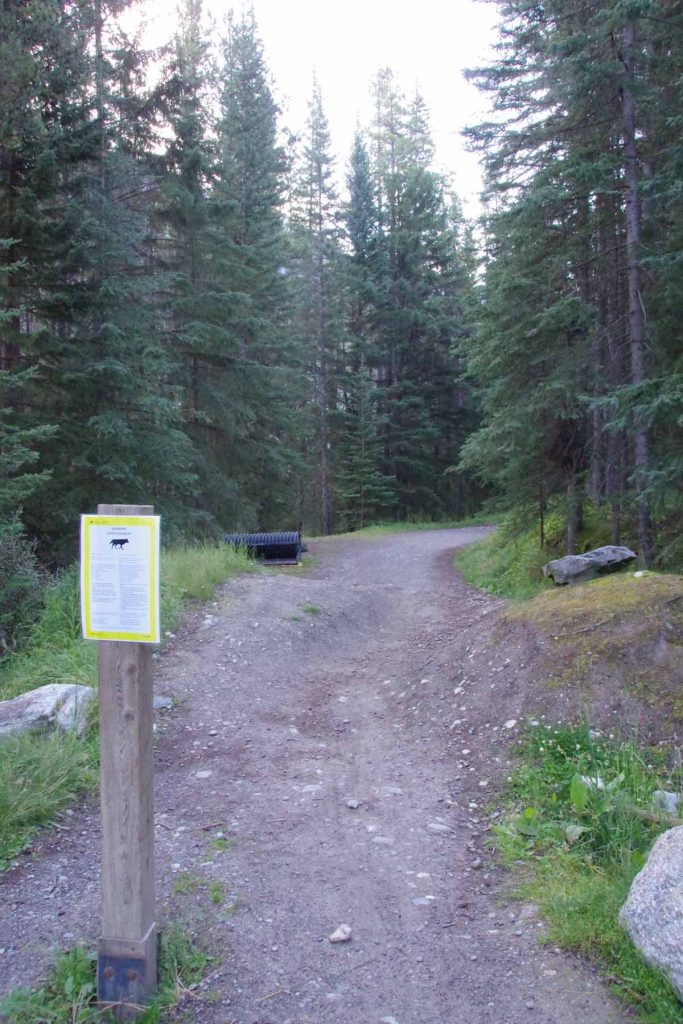 Day One
First day started with a lot of enthusiasm. I had breakfast in the hotel as was at the trailhead shortly after 8am. The temperature was cold, my cycle computer said -1C (30F) but I cycling hard made it feel less cold and it soon warmed up as well. I stopped at start of the Spray River trail and took first snap photo above. Wayne and Trish joined me for the first half of the day, which was fun. I left the trailhead ~45 minutes before they did, but they caught up even before I had finished the 11km of the Spray River Trail. It was somewhat flat, but even one or two slight hills to climb. 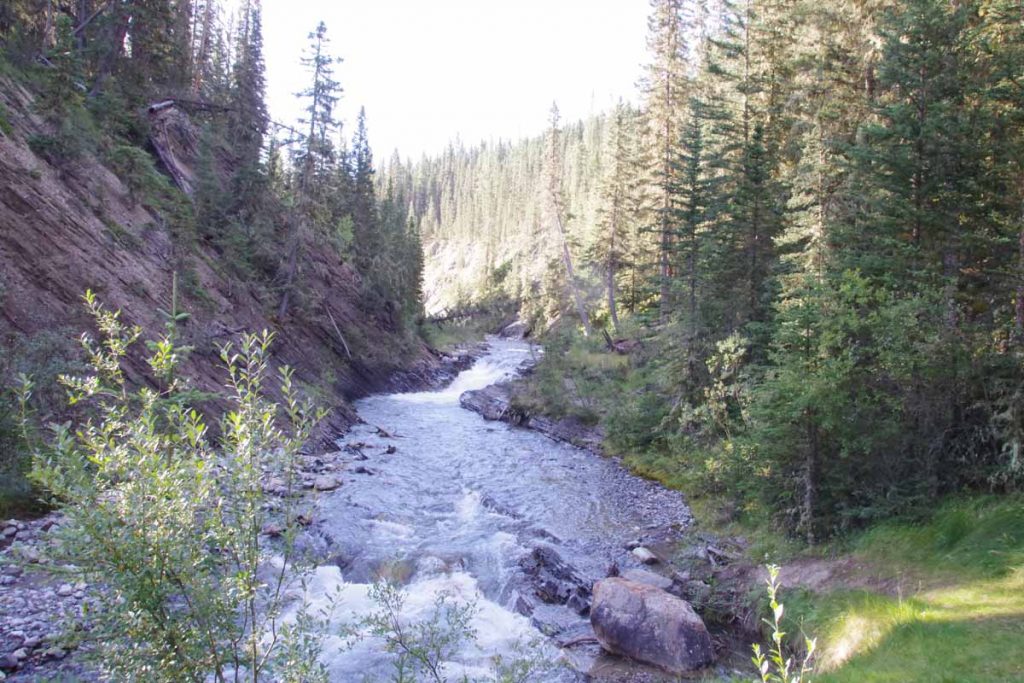 Crossed a few bridges and then more climbing at Goat River Trail.

It did seem like I was going surprisingly slow. I chalked that up to at least three things (a) overall there was more climbing than descent (b) I was just a bit slow on those uphills, carrying my gear (c) I switched over from km to miles. That last one definitely influenced my outlook since I was used to my cycle computer saying “40” or “50” by time I got to lunch and now it seemed much less. I had used km elsewhere in Canada since that was all the road signs, etc but now my GDMBR guide books and similar were all in miles.

At 11.5 miles, we stayed on the trail rather than going to (dusty) Smith-Dorien Spray Road. Overall a better choice, though the trail had some climbing and I had to stop once or twice when my heel was kicking my right pannier into my spokes. Seemed like I was dragging a bit here. We made it ~17.5 miles together and then had lunch. 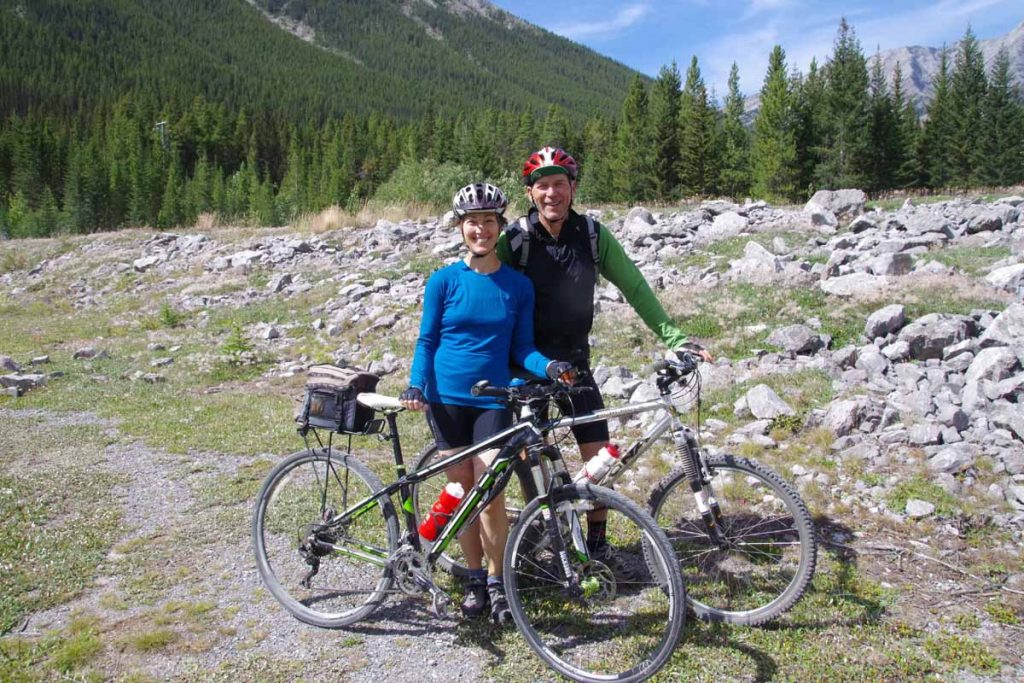 Overall, definitely fun cycling with Wayne and Trish on this first bit to start. 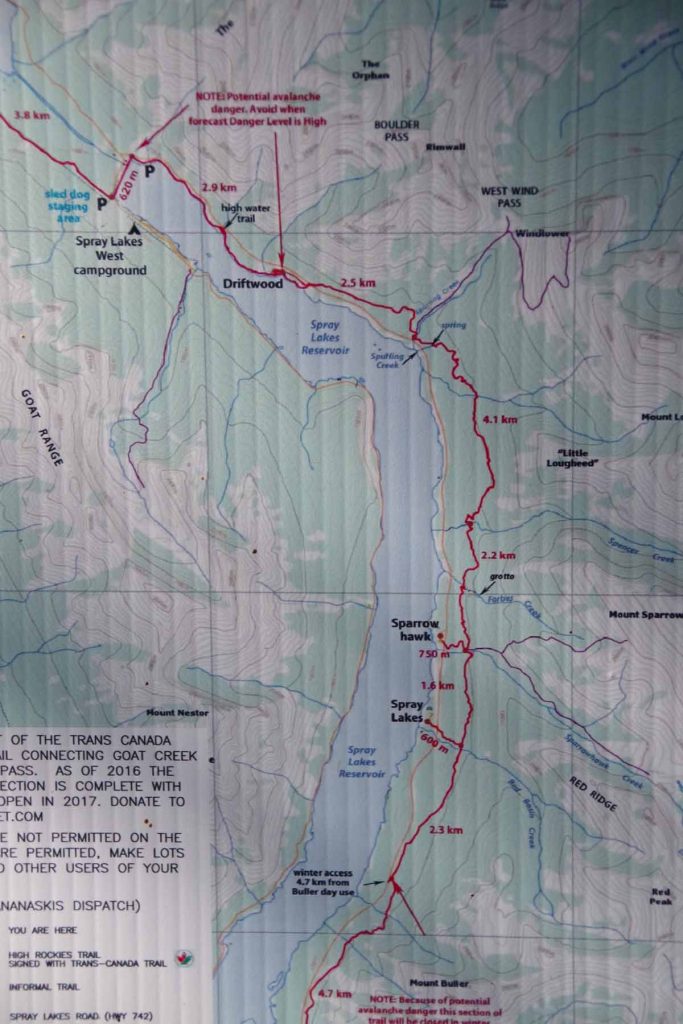 After lunch I had a choice of three routes

In the end I decided to stay on official route. While it was a little longer, and wasn’t was interesting as the new trail – I figured I’d try keeping with current route first. 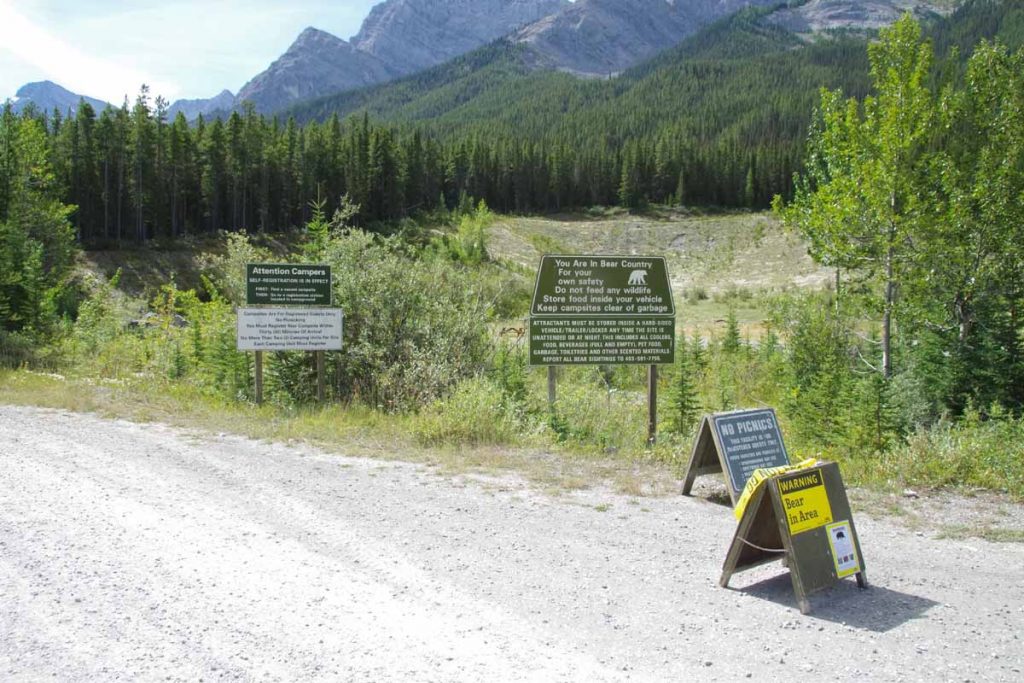 Several more warnings about bears here. After this a number of campground sites along the road. 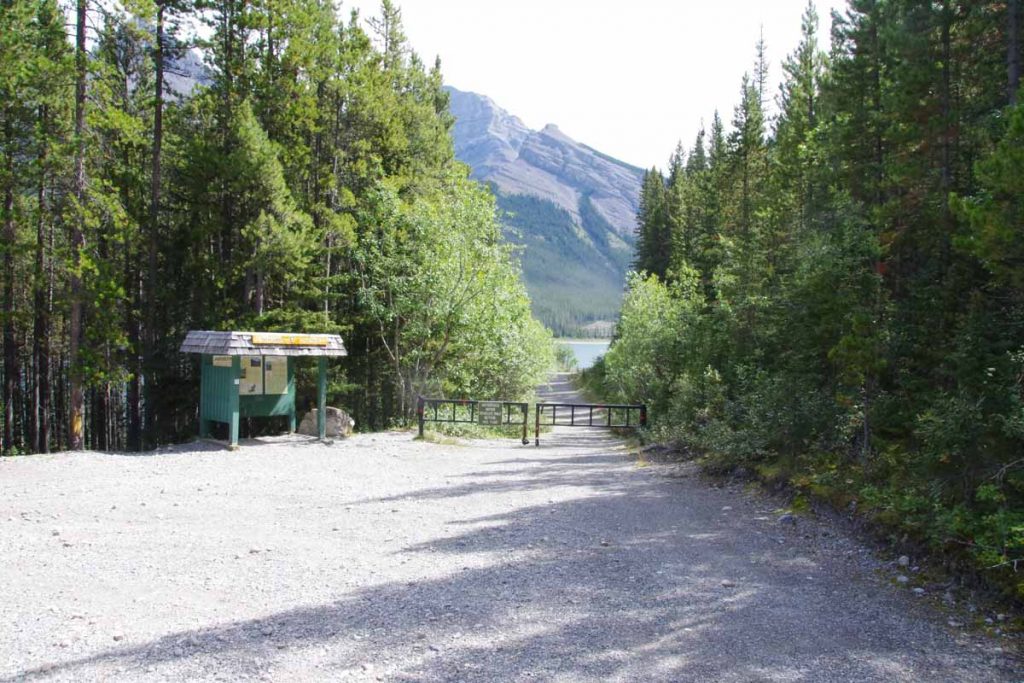 A little past 20 miles we had a gate and the road turned to trail. I have a “Cycling the Great Divide” guidebook which suggests stopping for the first day just past this gate and camping. Seemed to early and I pressed on.

The next section was not too difficult trail riding slowly around the lake. I crossed the dam and then a bit more hiking around including a steep 0.75 miles where I pushed my bike up the hill. That brought me to a hiking/camping area named for Mount Shark. When I got to the parking lot I was tired, but figured the hardest was done. Little did I know the gravel road climbed from here. It climbed and then climbed a bit more.

Finally it was almost 5pm when I got near to the top. I saw several “No Camping” signs and considered my options. There was a nice little stream nearby and I could see a spot where I could mostly duck behind the first row of trees. I decided to stop here. Only 38.4 miles but pretty tired for the day. I had a new water filter but it turned out defective so drank the water anyways.

Overall the day was tougher than I expected. There was an overall climb of ~1600ft which probably helped and a fair amount of trail riding which is still somewhat new. I did think it was fortunate that I didn’t have a trailer since that would have made it even slower.
Day Two
Today my primary goal was to climb over Elk Pass and camp somewhere on the British Columbia side. 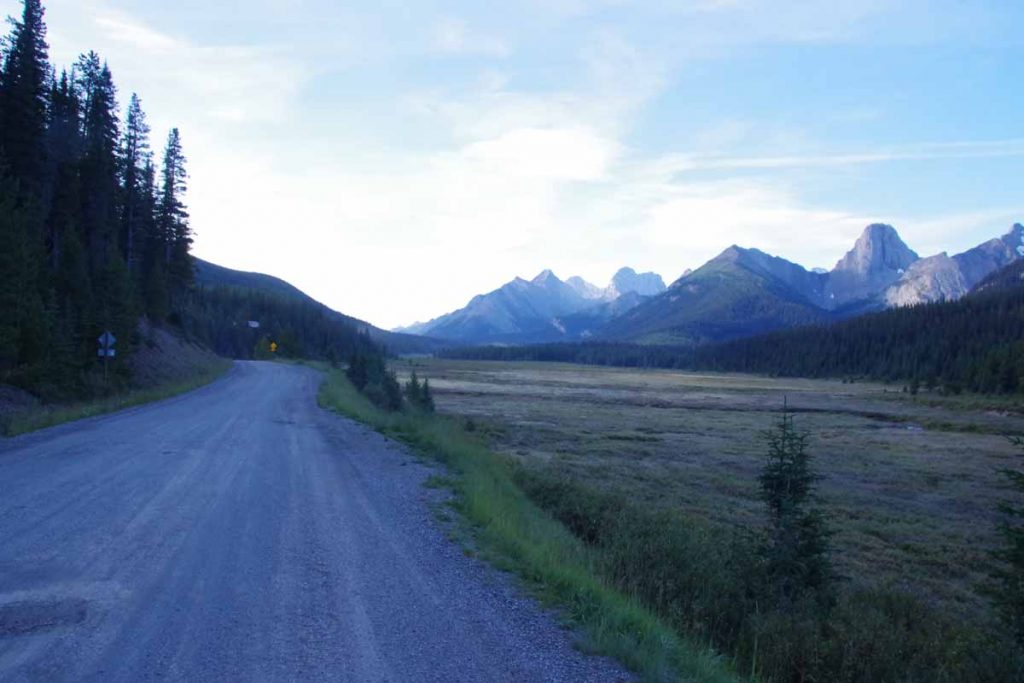 Early morning in my semi-hidden campsite before heading down the hill. It was again right at 0C (32F) but going down the hill I switched to new “lobster claw” mittens that put two pairs of fingers together. At bottom of the hill was Mount Engadine Lodge. I saw two people packing up a tent, yelled out – they were also Great Divide riders who I would meet later.

The main gravel road was faster than the trails from day before and miles accumulated a bit faster. However, every time a car would go by it would kick up a bunch of dust which would take time to settle. There were a surprising number of cars and all except one were going in opposite direction. I passed several trailheads, picnic sites and a lot more “no camping” signs.

At 17 miles I came to main road as well as pavement. Wow! That made some difference. After a mile a sign for paved bike path. 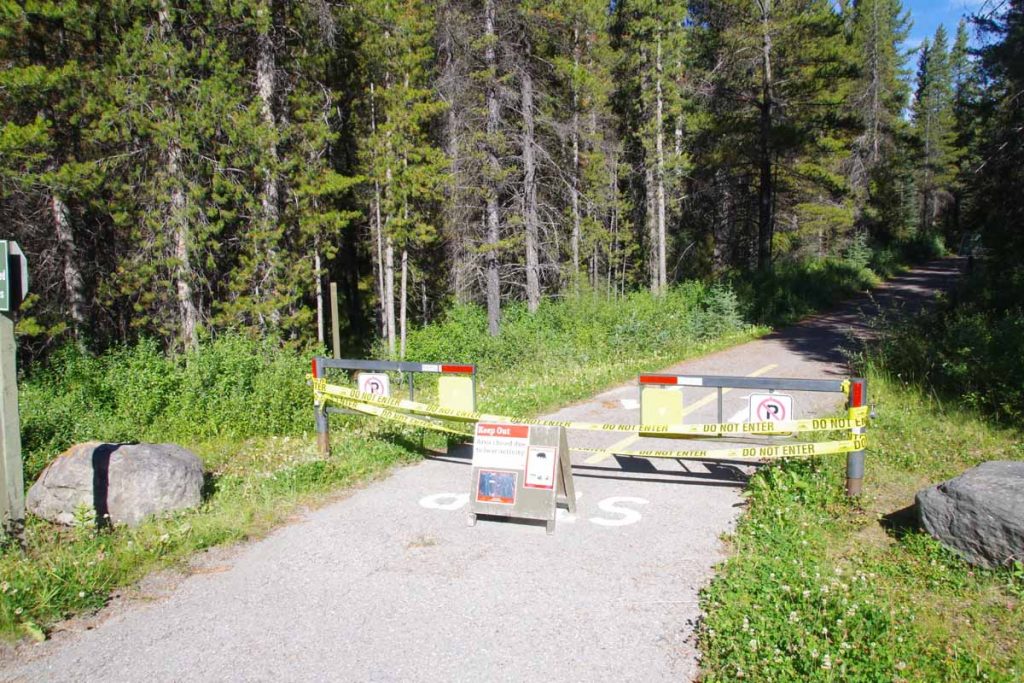 However it was closed due to bear activity. At 23 miles I came to Boulton Creek Trading Post. This was designated as a last chance to buy things before heading out again. I found some water purifying tablets and also decided to get some bear spray.

Bear spray is classified as a firearm in Canada and I had to sign a short declaration with name and address. The declaration essentially indicated that my purpose in using the bear spray was for bears and not for people. 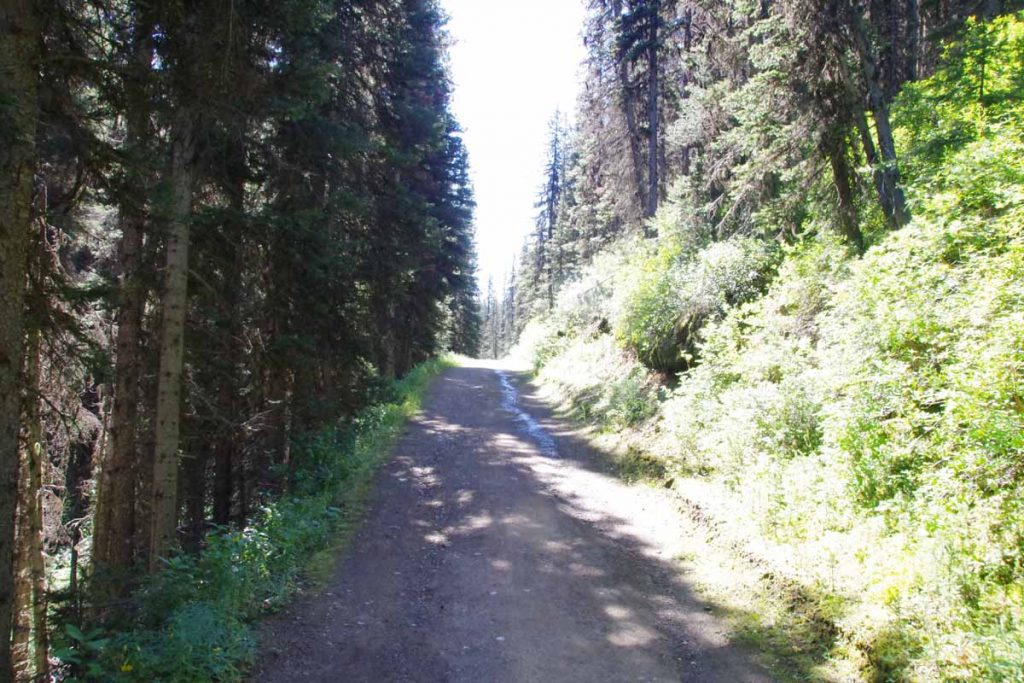 One mile later was start of trailhead over Elk Pass. I decided to try an experiment this time. The entire distance over Elk Pass was only 3.5 miles uphill and 2.7 miles downhill or 6.2 miles (10km) total. Rather than bike it, I decided to hike it with my bike for the distance. That worked fairly well. On the uphill stretch my bike computer had one hill listed at 18% grade and on downhill one listed at 14% grade. Otherwise it wasn’t too difficult of a hike and a bit more relaxed. 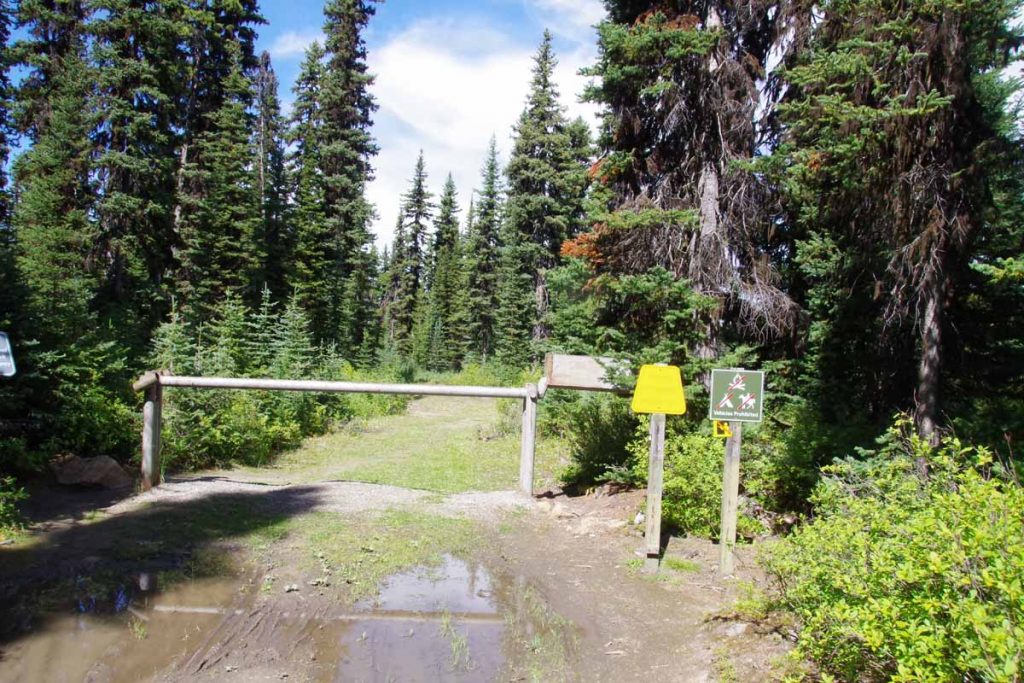 The top was marked with this gate and signs (looking back) to Peter Lougheed Provincial Park. This is first Atlantic/Pacific crossing on the GDMBR as well as first one on my trip so far. I’ve had other crossings so far but for example, I figured out that from McBride Yellowhead Pass was Pacific/Arctic and Sunwapta Pass was Arctic/Atlantic. 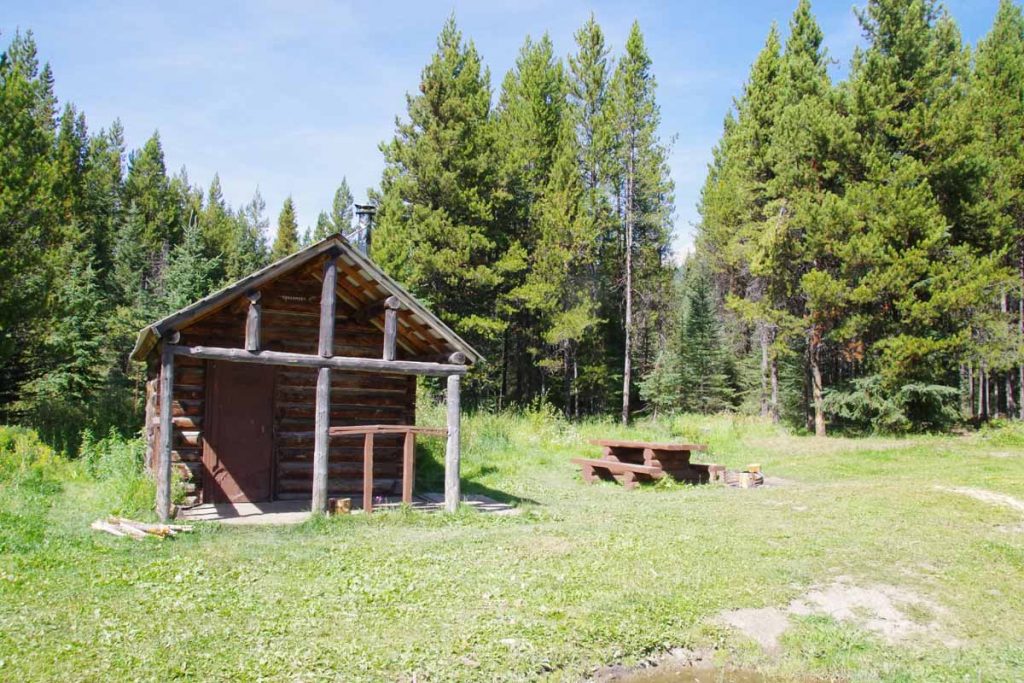 At the trailhead was a gravel Elk River Road. I followed this for another 14 miles. The predominant direction was down, but there were also uphill pieces. The stones made the road rough at times but overall reasonable cycling. There were several “recreation sites” along the way including this one at Tobermory with a cabin. Approximately 10 miles after Tobermory I came to a small site named “Weary River” and finished the day at mile marker 81.6.

Overall, found the second day fun and not quite as exhausting as the first. Walking the pass helped and overall terrain was probably a bit easier with not as much climbing. A little after I set up camp, two cycle tourists arrived. I had seen them this morning packing up from Mount Engadine as I cycled past in first mile. Both from Scotland and somewhat more aggressive timetable than myself and also traveling a bit faster. Unfortunately, they had received a ticket for camping the previous night.
Day Three
Today was easiest day of the three. Woke up a little later and set off down the Elk River road. The road continued to be rough but gradually became better as got closer to Elkford. There were some shorter climbs, but overall lost more elevation than gained. 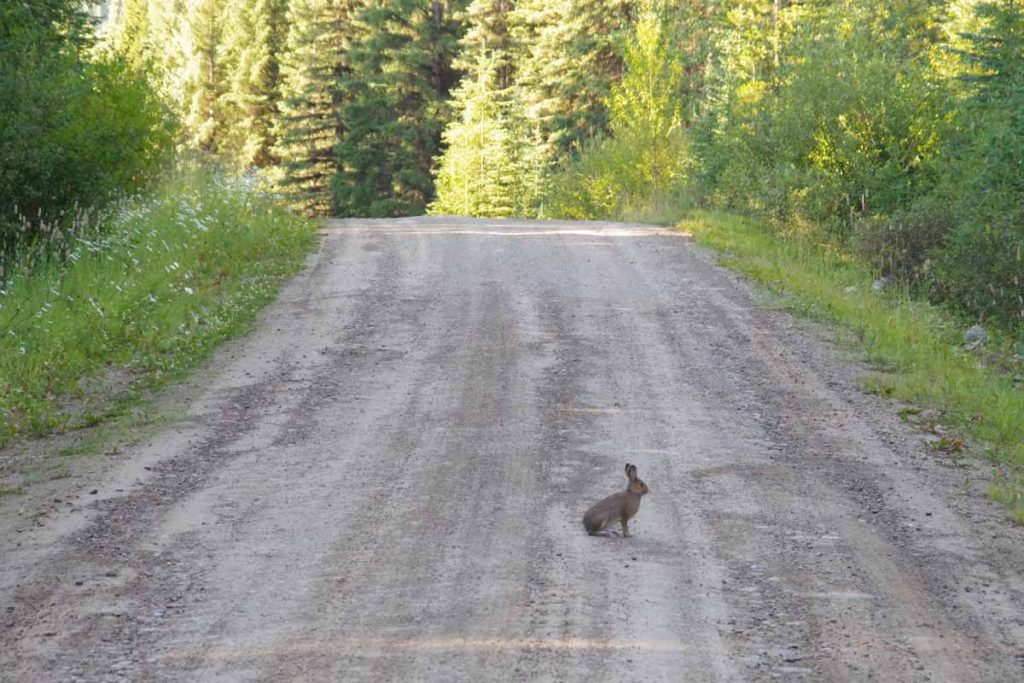 Below is a photo of our Scottish cyclists. They were able to condense their gear into less space than mine. 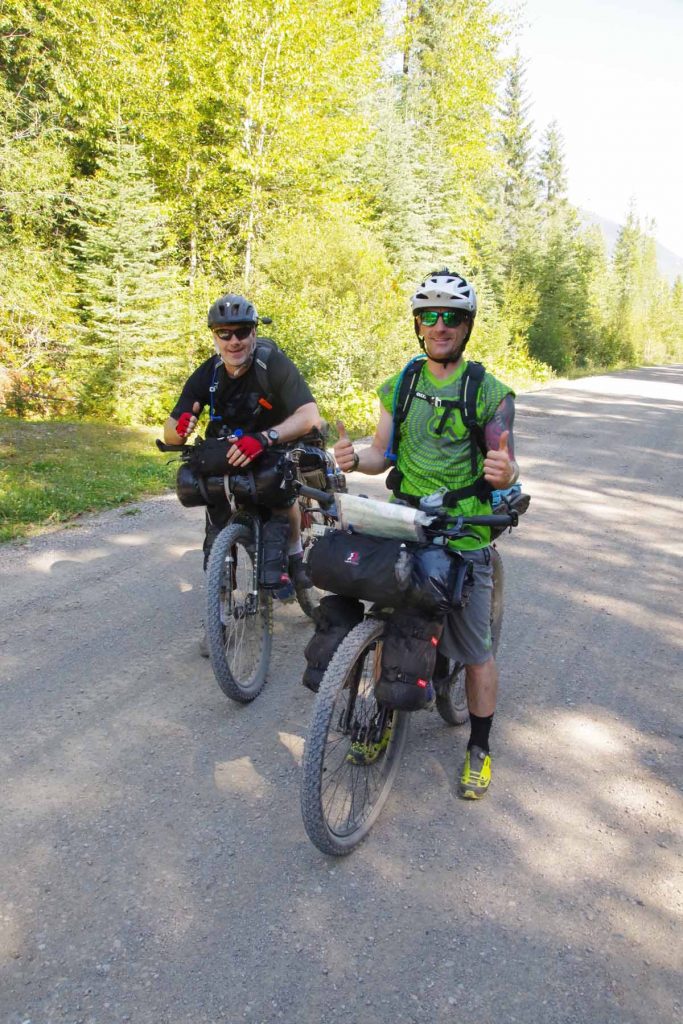 Along the way we had these trail riders coming the other direction. 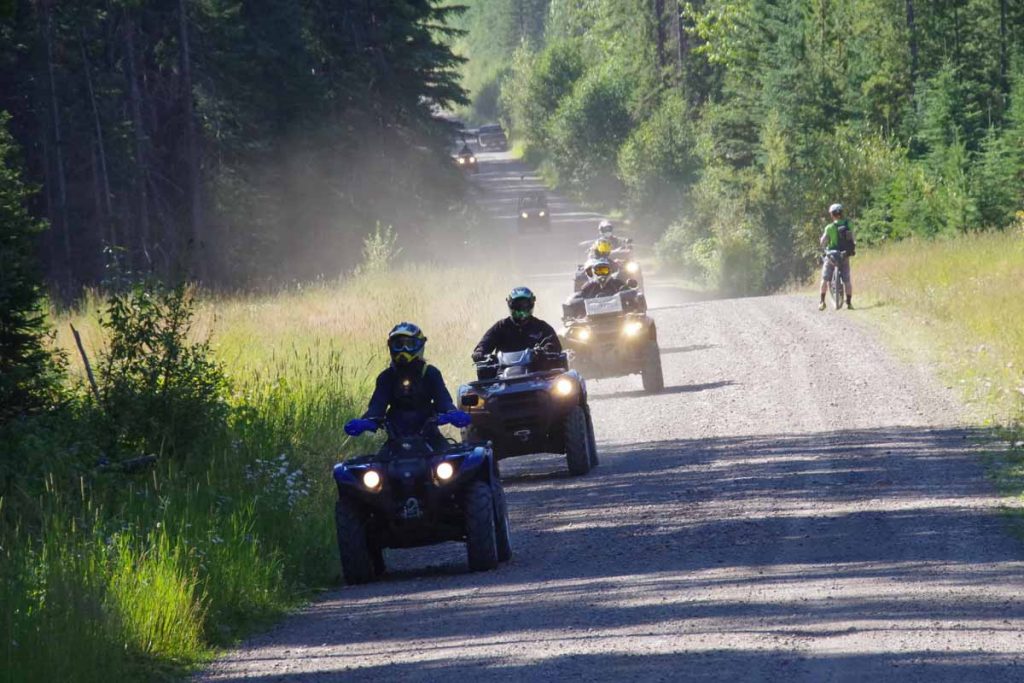 Without too much difficulty was able to make it to Elkford a little past noon. While this is part of British Columbia, I learned that this area still uses the same time zone as Alberta.

Overall, three days of the GDMBR has given me a first taste of the GDMBR. Except for a section of trail replacing road, followed the official route. However, based on my first taste, do think I’ll try doing a hybrid with some road riding skipping some of the most difficult bits. For example, from here to Eureka MT is what looks like perfectly reasonable paved route – a lot of it is the original “Fernie Alternative” that was route before 2010. I will most likely take this paved route down the valley at least to Eureka.

Also realized that not having the trailer is probably a blessing since that would have made the cycling a bit more challenging including pushing the bike up an 18% grade.