Three days of cycling, brought me from Teslin to the junction of the Cassiar and Alaska Highways. I split the 243km distance into three not extremely long days, though there were a surprising number of short steep hills to climb. 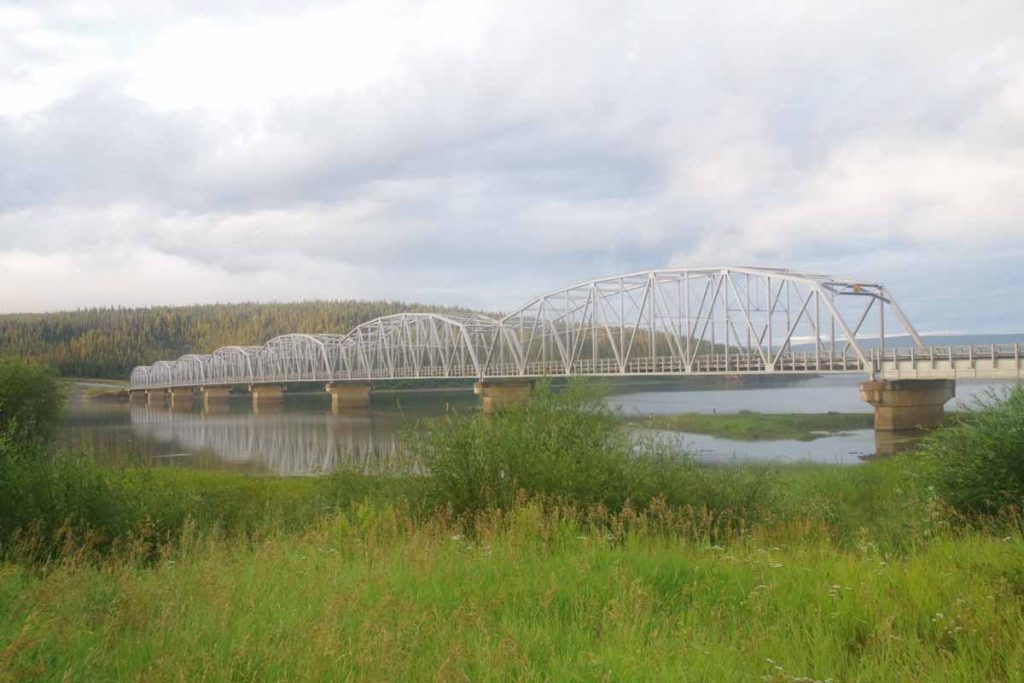 First day set the theme for hill climbing. Once I crossed the Teslin Bridge shown above, there was a 3km long climb that started with 150m for the day. After that a descent, but in the first 40km to Morley River, a surprising number of little hills and drainages to cross.

I had started a little past 8am, later for me but waited for lodge to open and get breakfast as well as read paper and do the sudoku puzzle. 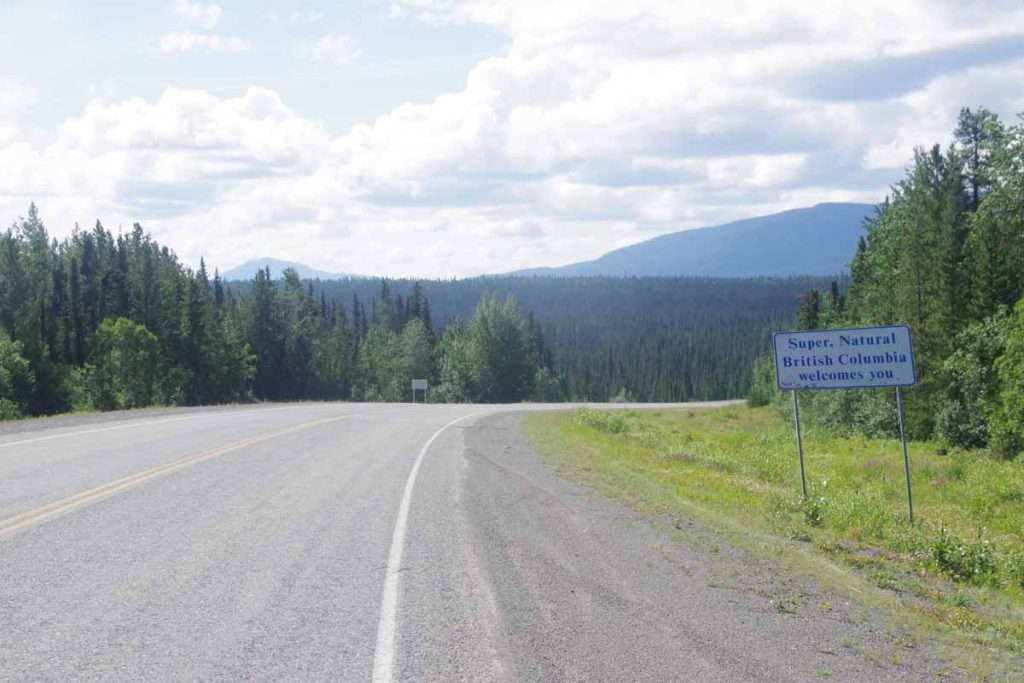 After climbing out of the Morley River drainage, around 45km brought me to the border with British Columbia. The Alaska Highway makes a total of seven crossings of the YT/BC border before finally leaving YT a bit east of Watson Lake. Not much past this sign was a rest area where I met a group of 22 Norwegian motorcyclists on their way up the Alaska Highway. It still surprises me how many of such groups still ride this road as a big adventure. 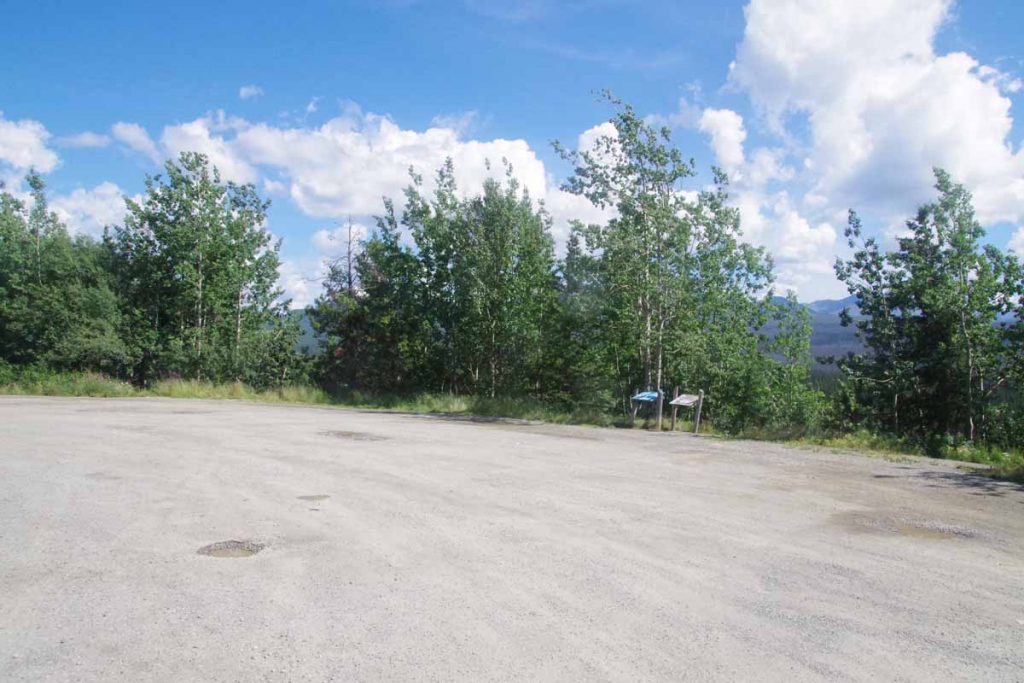 In this next stretch I saw two cyclists heading the other way. First didn’t stop, but second let me know that my potential end-point, above, wasn’t going to be that interesting. I had picked a rest area that was also listed as access to fishing, thinking this meant one could get to water. However, as can see above the rest area was wide open and no easy access either. However, without much difficulty went 2km further to end at 93km and down beside the road at place known as Screw Creek. First night sleeping in BC. 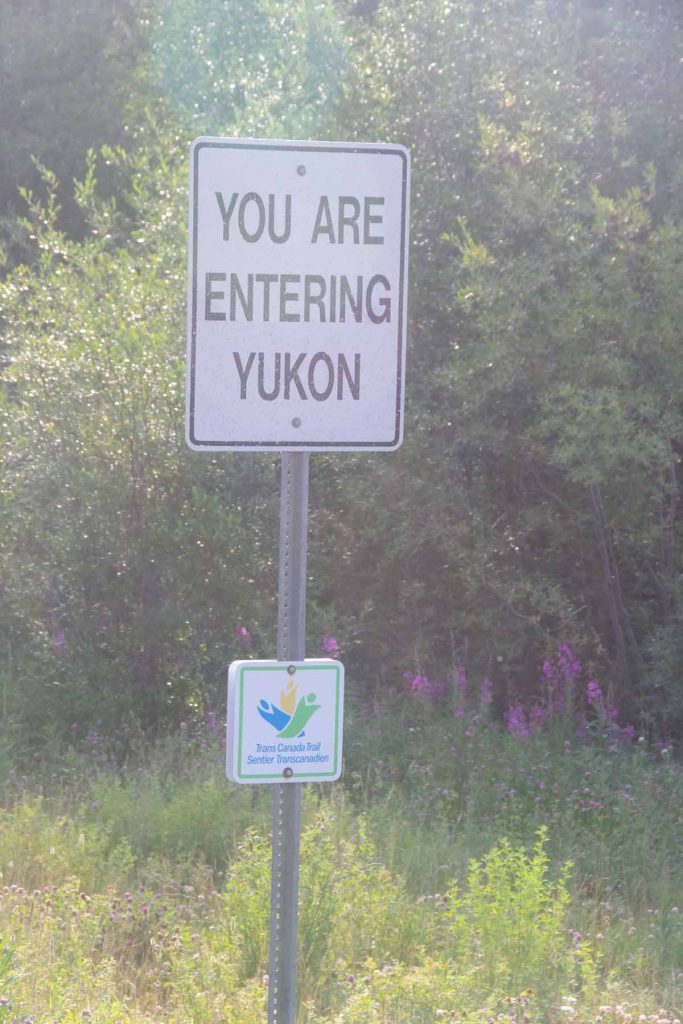 Second morning, over a few more hills and the road led back into the Yukon with a fairly simple sign shown above. I was climbing up to a continental divide crossing – naming the dividing point between waters that drain to the Yukon and waters that drain to the McKenzie River. One sign suggested that presence of predicable food supply (salmon) in the Yukon led to less nomadic populations. 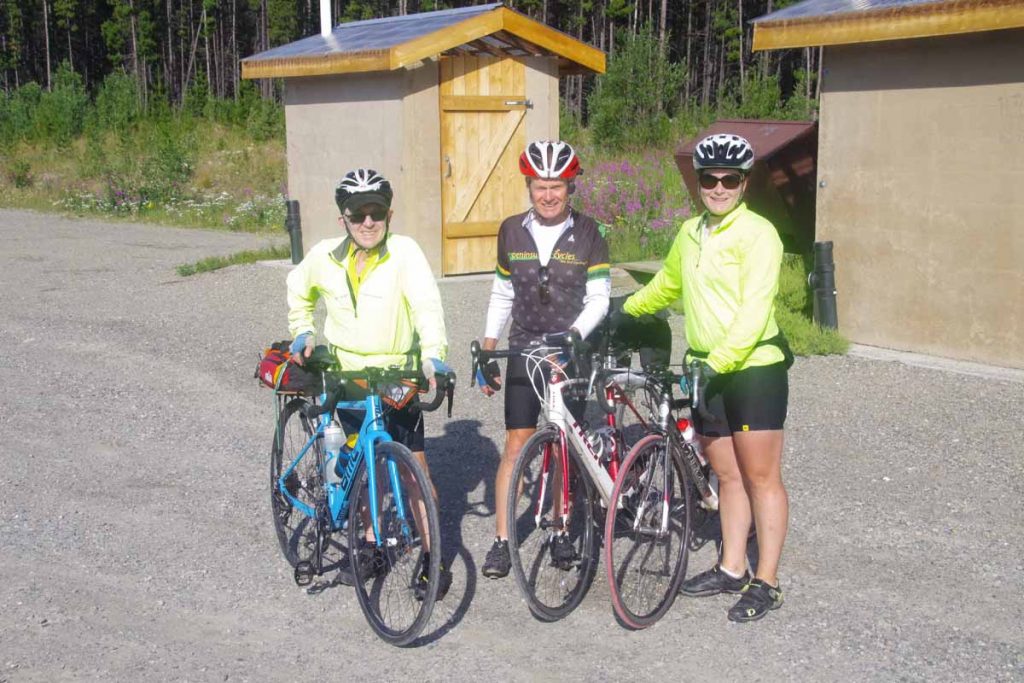 I also met these three Canadian cyclists at the continental divide crossing. They were headed towards Inuvik and had a 170km day planned today. 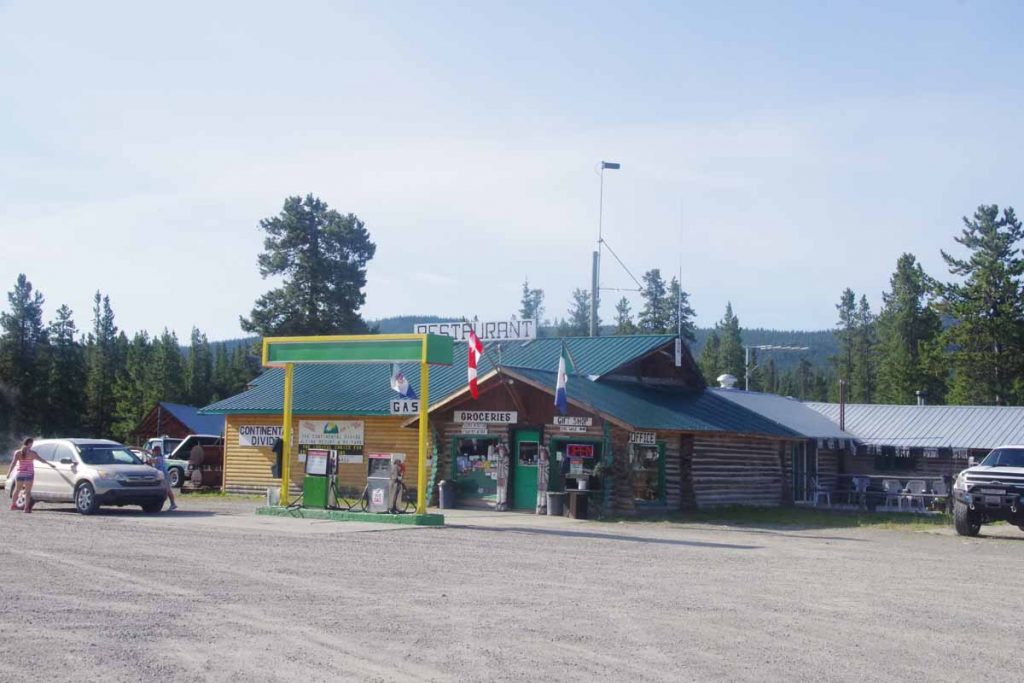 A pleasant surprise just two km later where there was a lodge open that I hadn’t expected. The normal cook was away and the woman behind the grill made lots of excuses about not being a real cook, but breakfast tasted just fine.

Another 18km later was the Rancharia Lodge. I stopped and had a smaller bite to eat here as would be last spot for 100km. Also surprised to find open internet here. 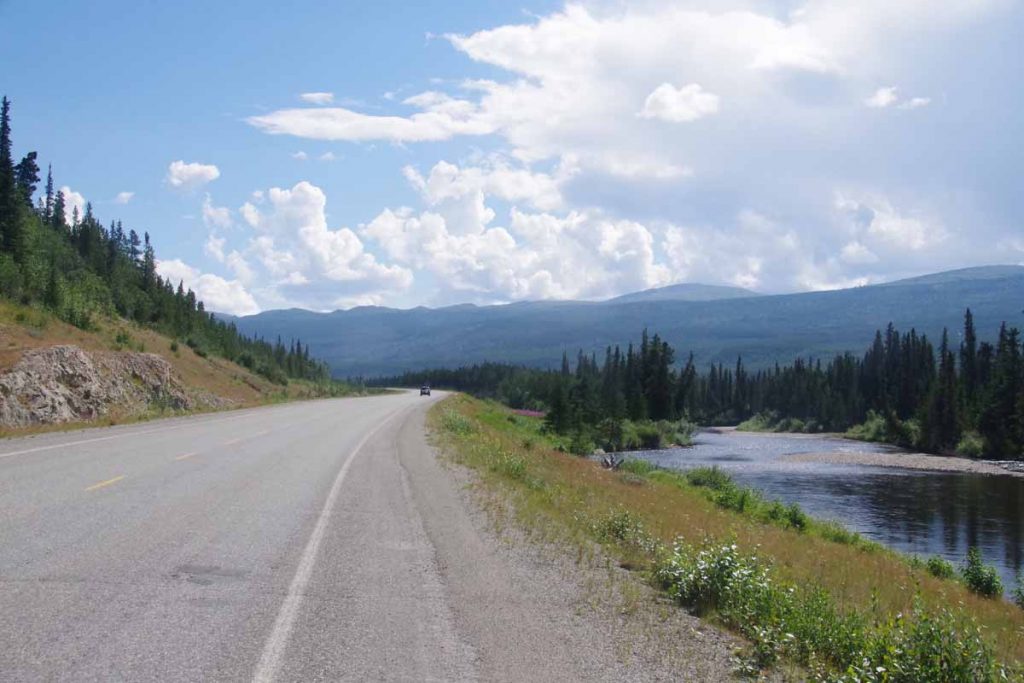 After the Rancharia Lodge, the road mostly followed the river and so fewer steep little climbs though did get some headwinds in compensation. 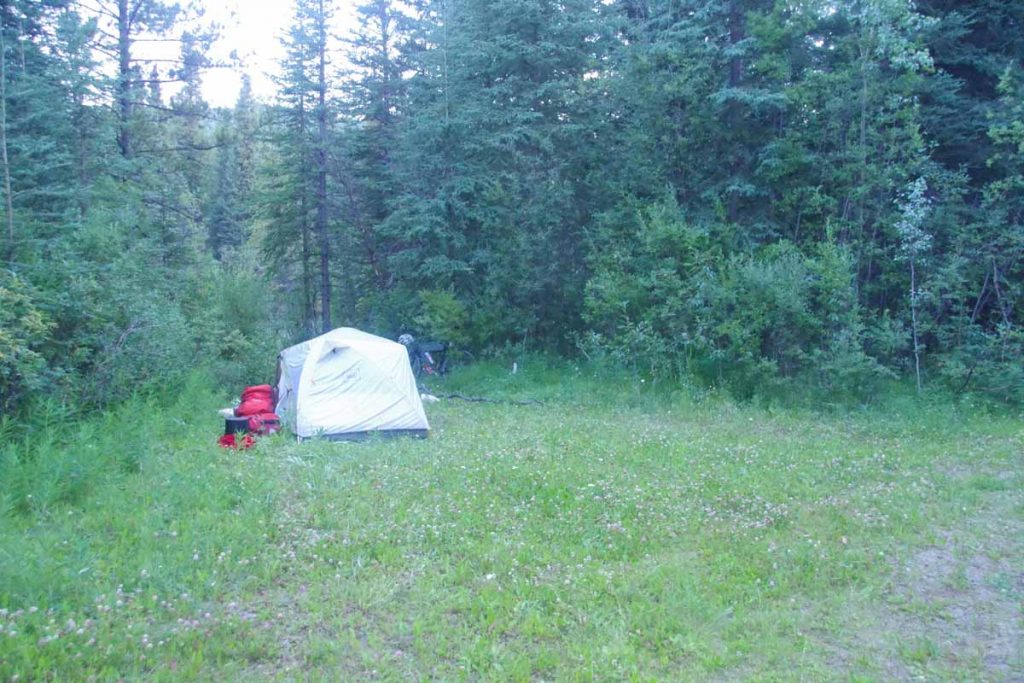 At the bridge before Rancharia River leaves the route, found a nice spot to camp. Only 86km for the day but that also left only 60km for day three. 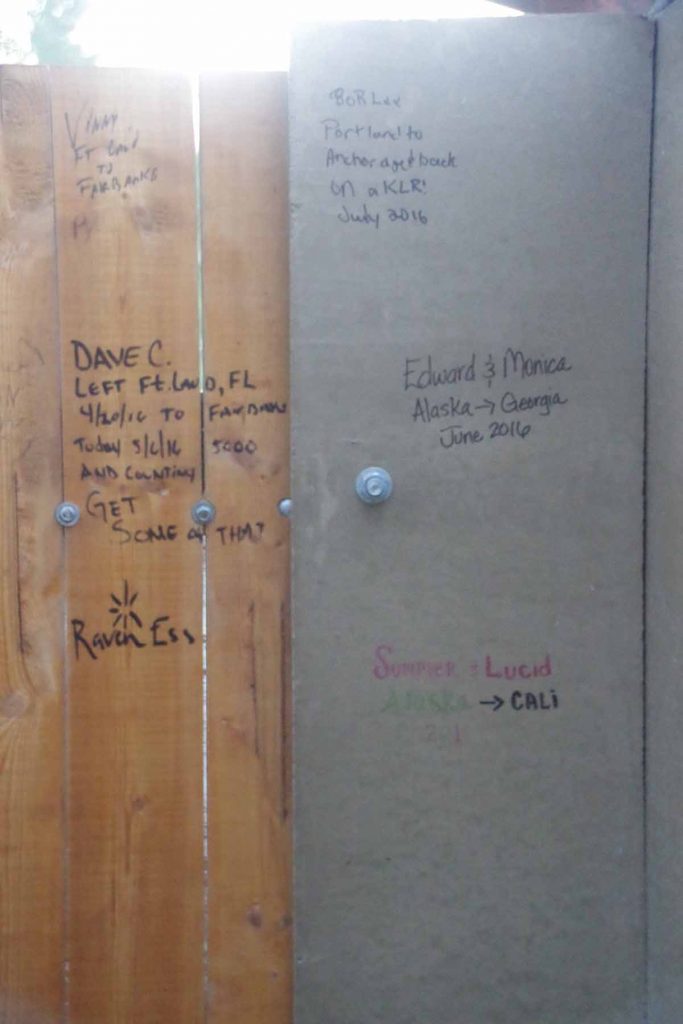 One thing I do find interesting is a lot of the graffiti on the outhouse walls is of the form “we were here” from travelers on their way to or from Alaska. I didn’t add to it. 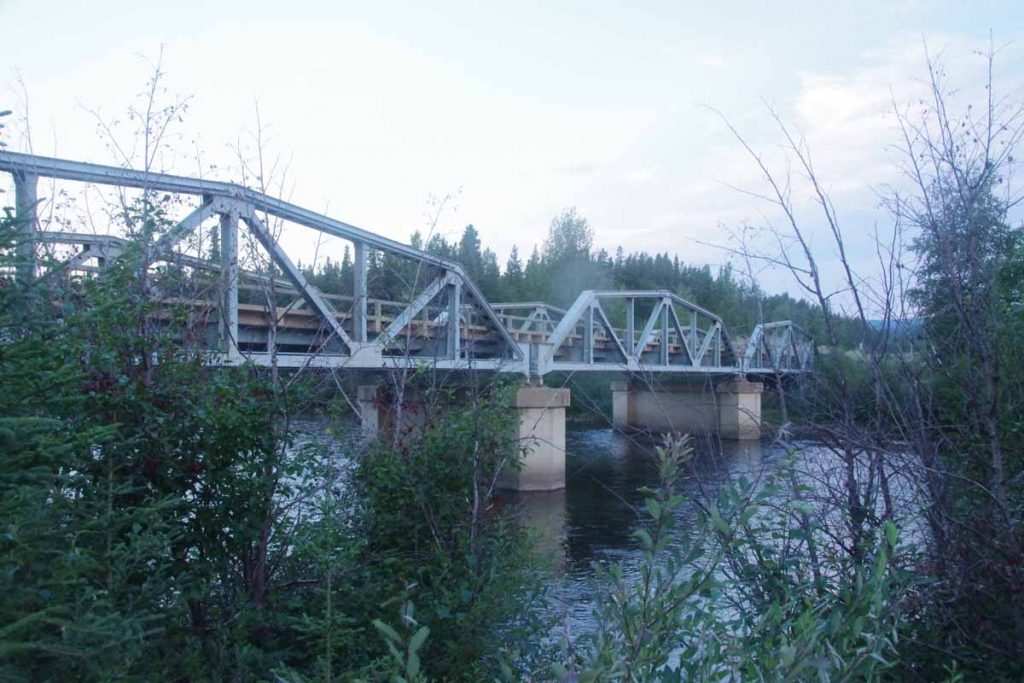 Here is a picture of that Rancharia River bridge. Also interesting to me that they built the original road in 8 or 9 months and just punched through whatever they needed to bulldoze a road. However, now 74 years later it is clear the bridge crossings have been upgraded and the overall road grading is gentle grades sometimes high and above the small creek/drainage crossings. That makes it a bit of a guess to find the ones that might allow some type of access so you can camp and also get water from the rivers. 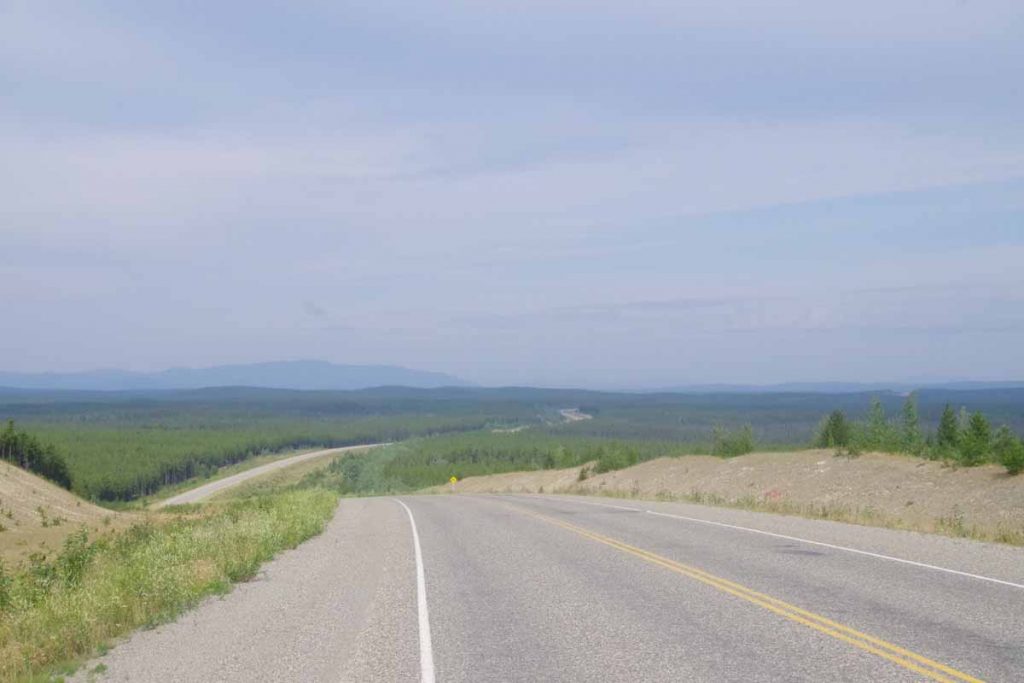 Third day was a shorter and not as tough day. However, still a number of hills to cross as you can see above the road crossed several drainages. Without too much difficulty made my way into Nugget City and was a able to check into a room for two nights here. 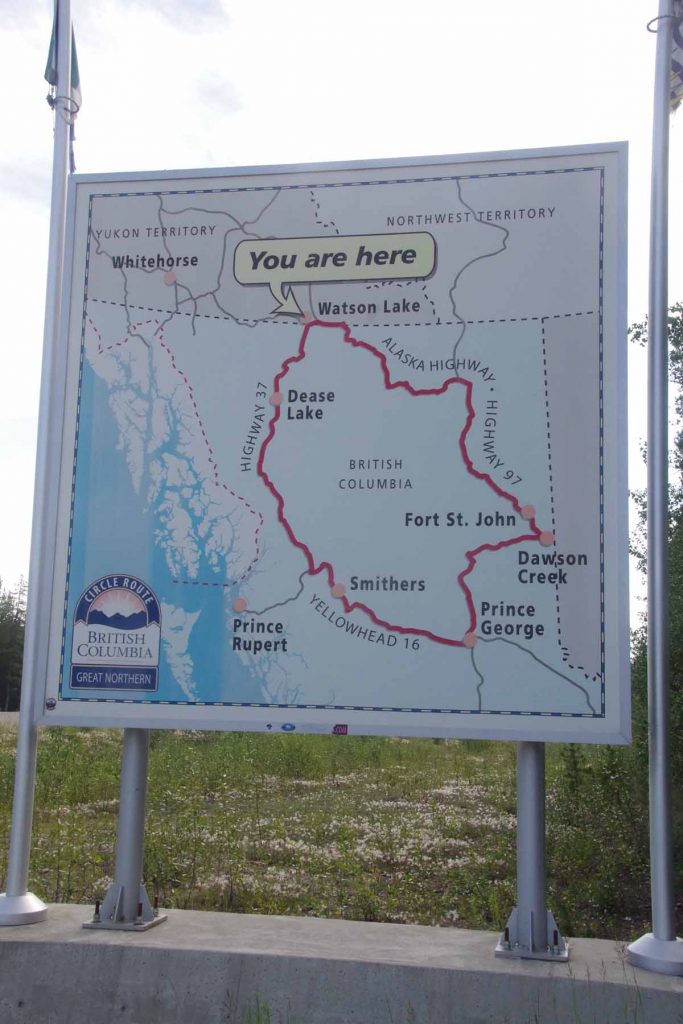 The photo above gives a good overview of the two different road choices from here to Prince George. One way would be to continue to the end of the Alaska Highway at Dawson Creek. This route is ~100km shorter. The other way is to now go down the Cassiar Highway via Dease Lake and Smithers. This road has been upgraded recently and is now supposed to be all paved. There will still be some gaps between services so may need to cycle into Watson Lake tomorrow to get some groceries.

This marks ~4 weeks on the road since leaving Deadhorse. I still haven’t seen stars in the sky. There is now 6 hours between sunset ~11pm and sunrise ~5am but it doesn’t go very far below the horizon so not really dark (or I’m asleep in too much of this time). However, I was able to notice a nice moon last night around 1am, so expect to see more dark in next weeks as I head more directly south.