Tired of seeing Smithers photos? I’m not quite tired of taking them, though will be happy once I’m on the road again.

I’ve had a quiet past several days and also have done some exploring of the area. Right at start of Monday morning I called Phil Wood service and had a ~20 minute conversation with Leroy about the broken hub. As part of that call and several follow up emails back and forth, the plan emerged. Phil Wood has sent the replacement hub parts (under warranty, thank you) via UPS and now the waiting is for an expected Friday end-of-business delivery. The latest tracking shows the package has reached Prince George, ~375km from here. Hopefully all is well and McBike gets it installed and I’m able to depart on Saturday, also on my way to Prince George. 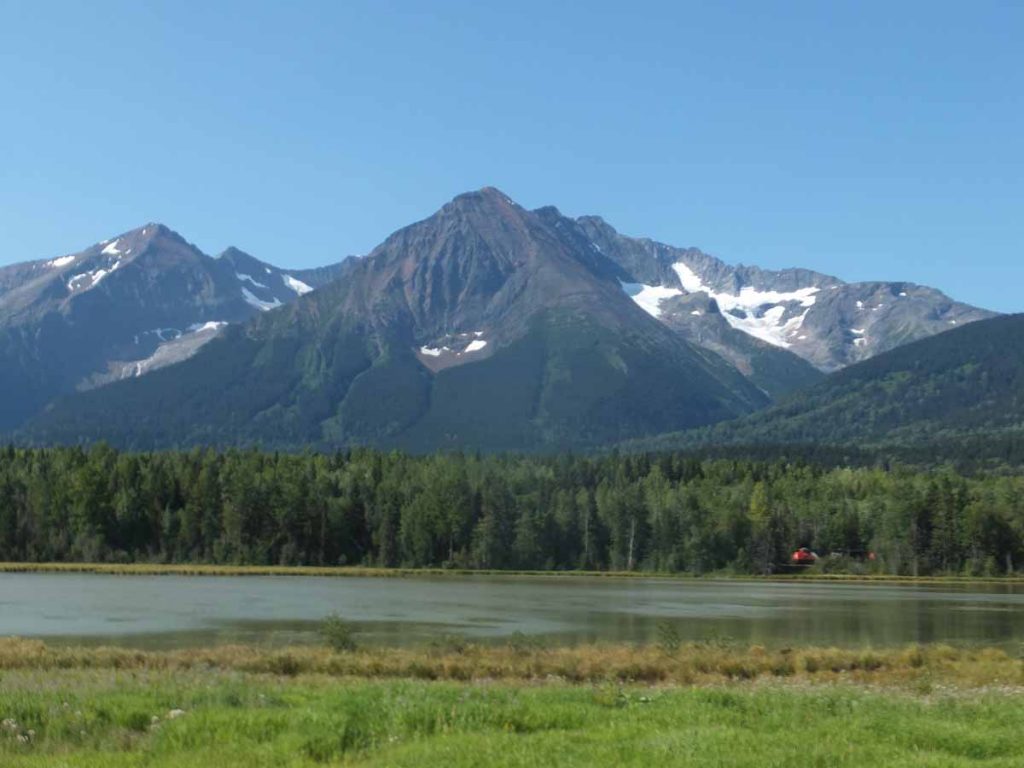 On both Tuesday and Thursday, I rented a mountain bike. On Wednesday, I did more walking around town.

I traveled north to point where the hub failed and then cycled my way back, partially so I could see the missing section but more from my bike. I also stopped by the Lesters. That takes some explaining: in 2013, I cycled Tour D’Afrique across Africa along with Jared Lester and ~50 other people. Jared is a strong cyclist, a real nice guy, and at 18 was youngest cyclist on the trip. However, he works for BC Wildfire service and hence wasn’t in town. Jared had volunteered his families assistance if needed. I didn’t need, but instead just made a courtesy visit while I was here. I had met his parents when they came to Capetown at finish of TDA. Still hope can intersect with Jared either later or during my travels from here to Prince George. 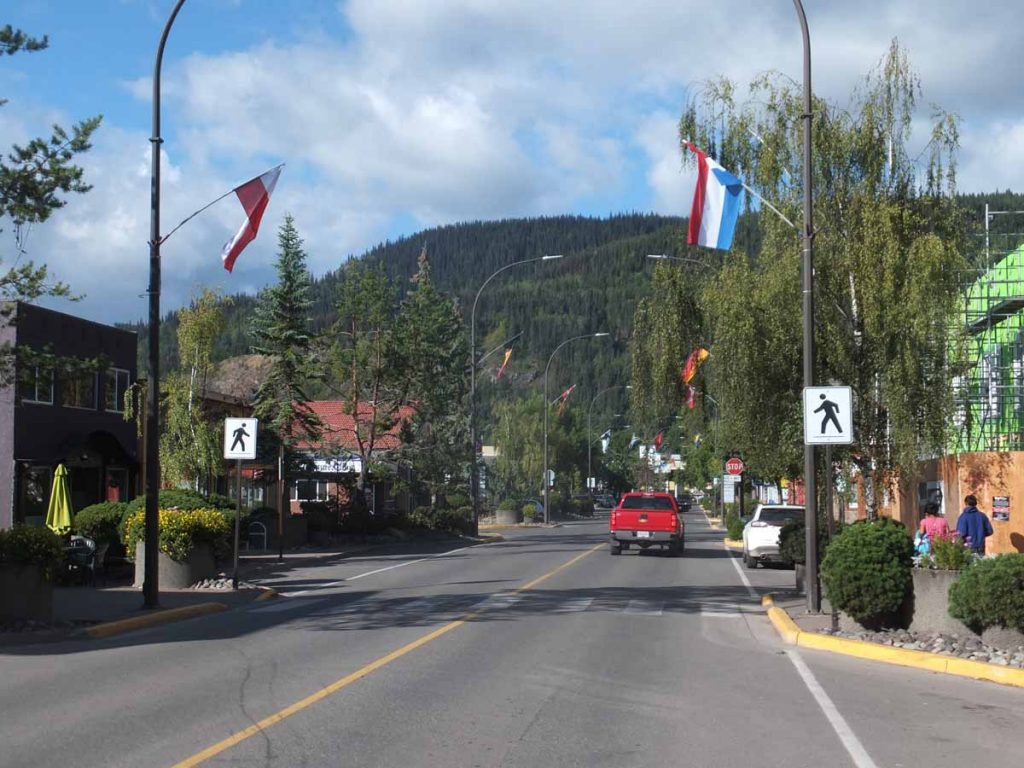 Here is a photo of Smithers Main Street, this time with the flag of Poland and of the Netherlands. They had a number of other flags displayed this day as well. 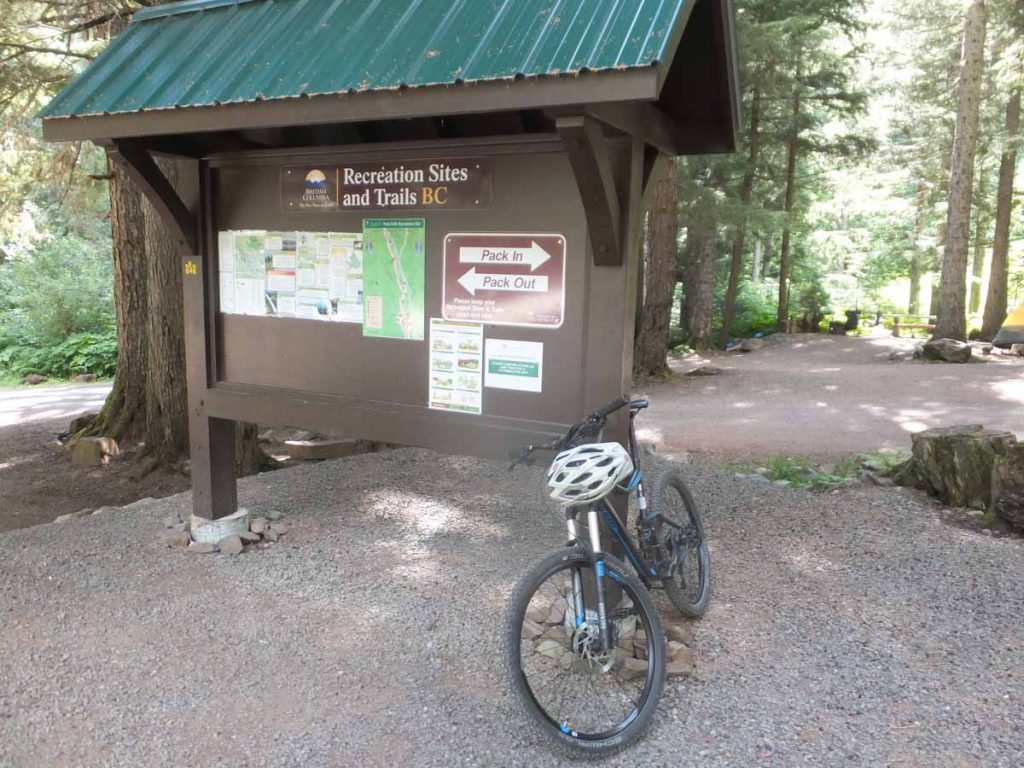 Here is the mountain bike I rented. Nice 29er, full suspension bike. I also rode up to the trailhead for Twin Falls, a local recreation site just north of town. The road to Twin Falls gets slightly steep at the end and then there is a short trail to a viewing platform. 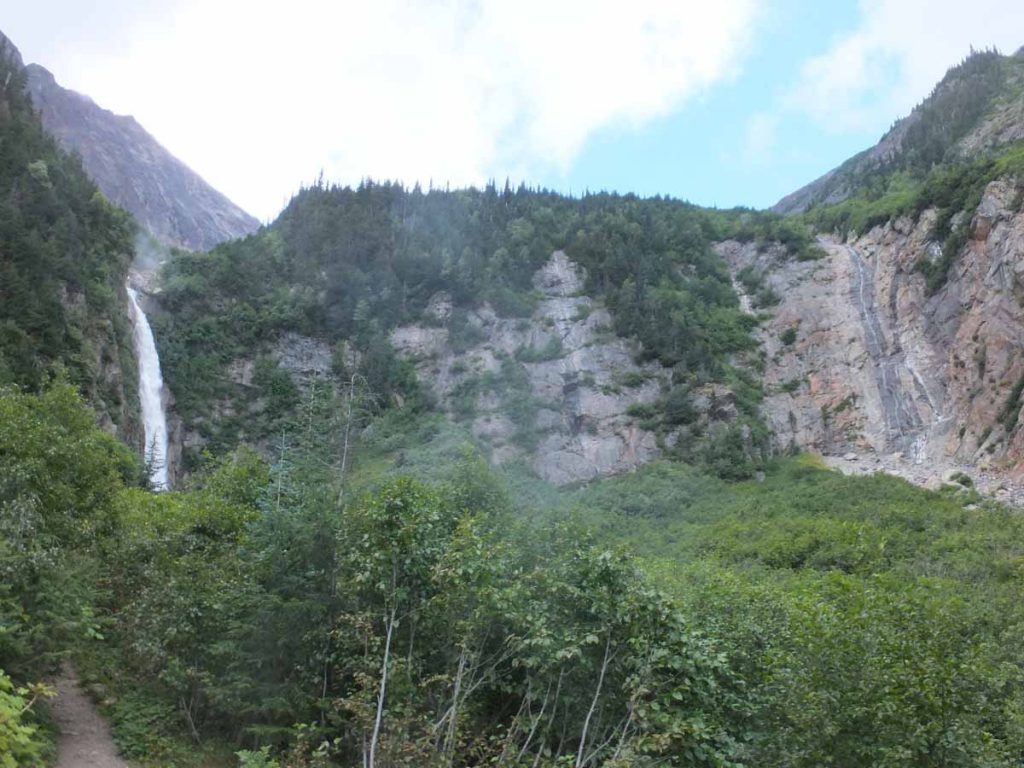 Here are the twin falls from the viewing platform. Note that they aren’t quite identical twins since the water from the left fall seems much more than from the right. 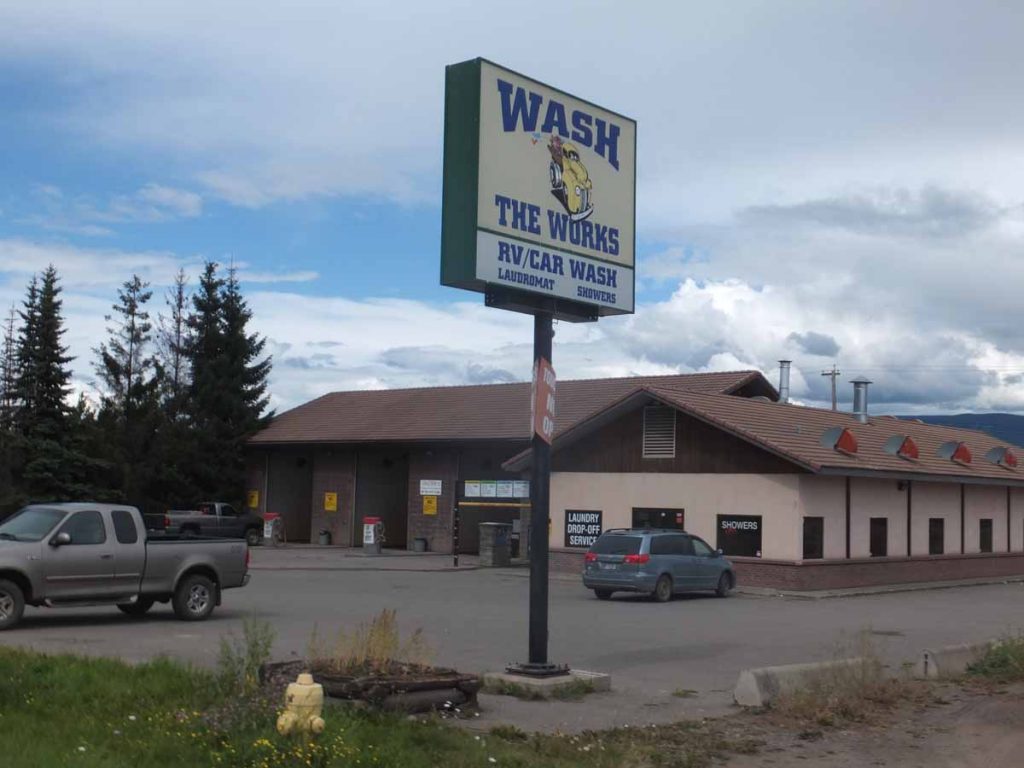 A number of businesses of which this one struck me as a typical one catering to those traveling with RV. A combination of large RV-sized car wash, showers and laundromat. Before leaving will stop by laundromat again and make sure everything is clean. 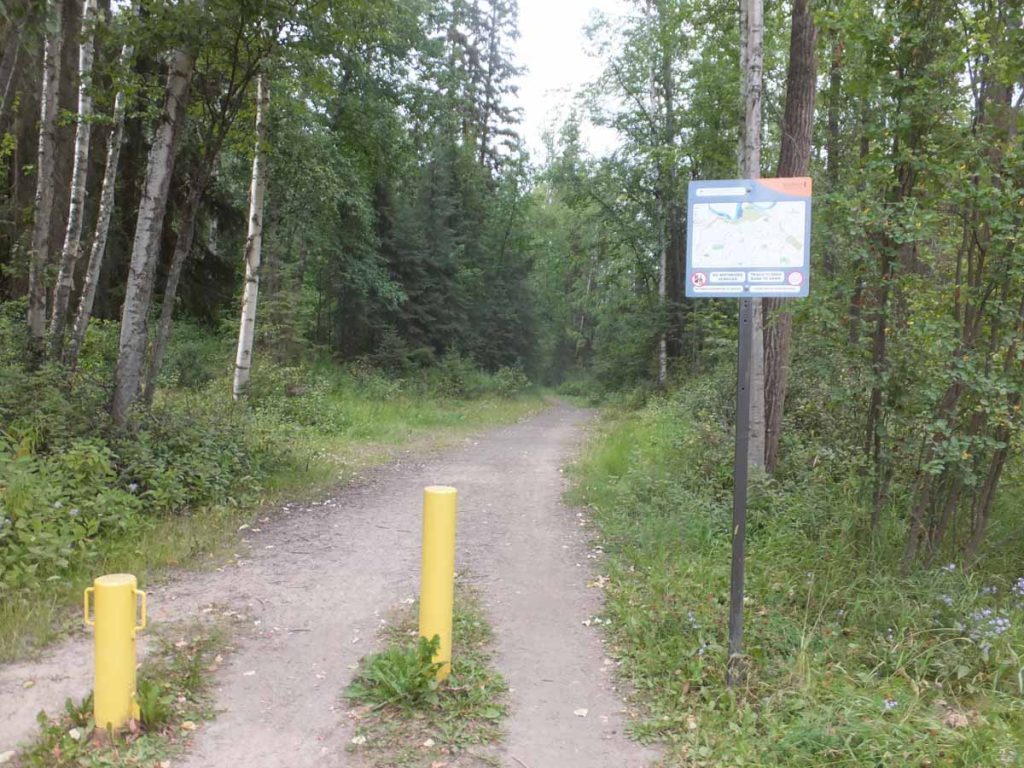 One nice part of Smithers is the “perimeter trail” a mostly connected set of paths through the woods that can be followed to ride around Smithers. Some are nice forest paths like this one, some are rough rocky paths, one section was closed and some sections are on-street bike paths. However, get a sense of Smithers as being bike friendly with racks placed downtown and facilities like these paths. 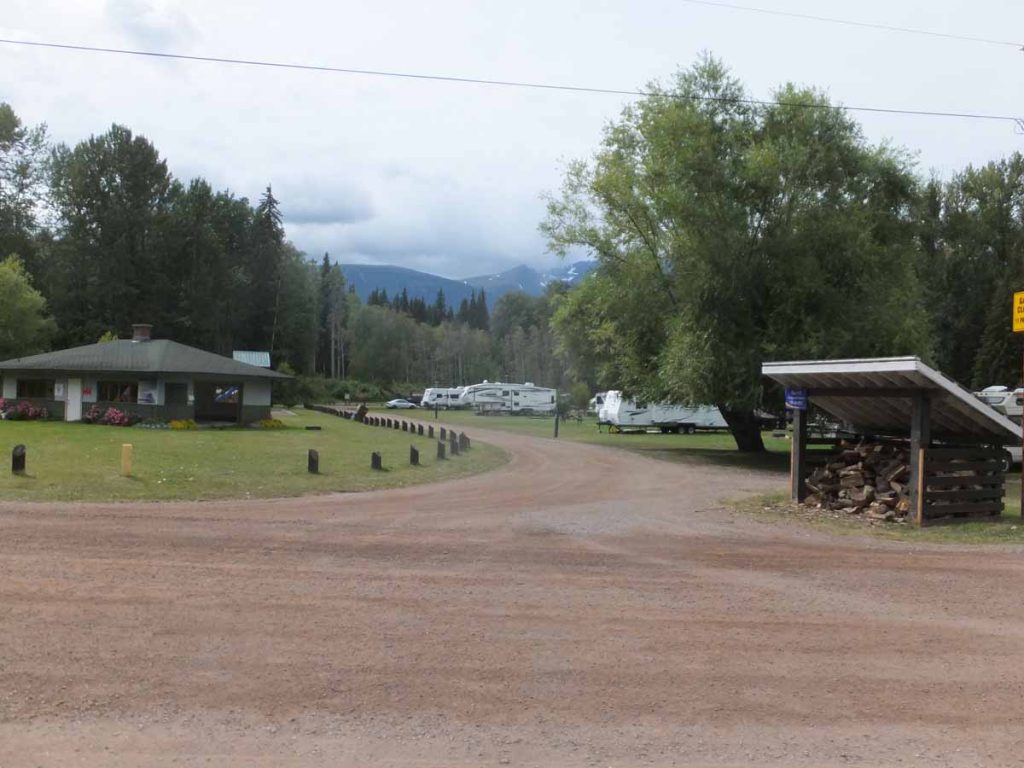 I’ve stayed in motel, but there is also a nice community campground down by the river. 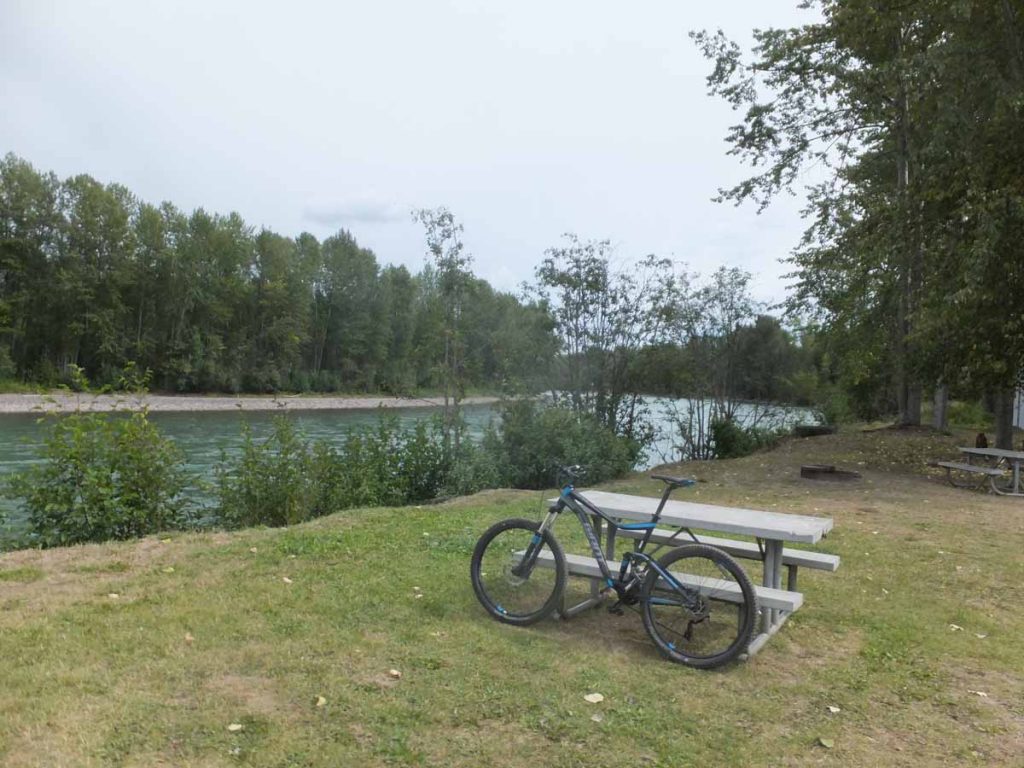 Photo of the Bulkey River, not far from that campground.

Overall, have gotten a chance to get out most days and even do some cycling with a rented mountain bike. All this while occasionally checking the delivery status as the package slowly made its way north. Hopefully tomorrow the package arrives and then we see about getting things fixed and moving further again.