Snowbirds and interstates were the themes for the day. 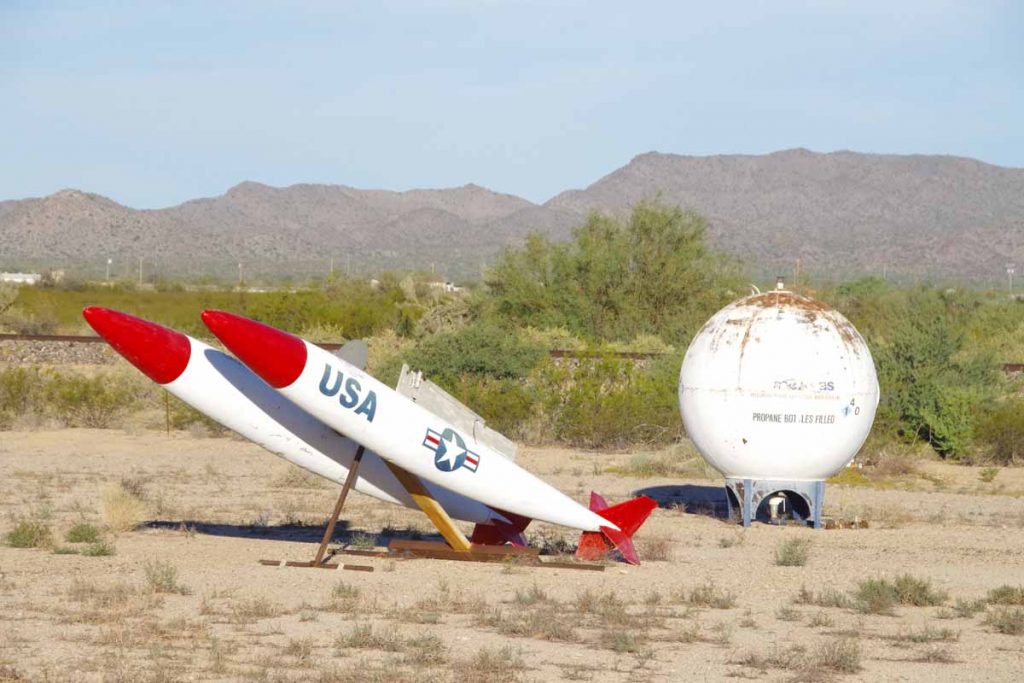 Waited until the cafe opened to have breakfast and then headed out. As expected today was warm (~33C, 91F) though not abnormal. Salome might have military connection as displayed by these missiles as well as map of middle east in the convenience store. 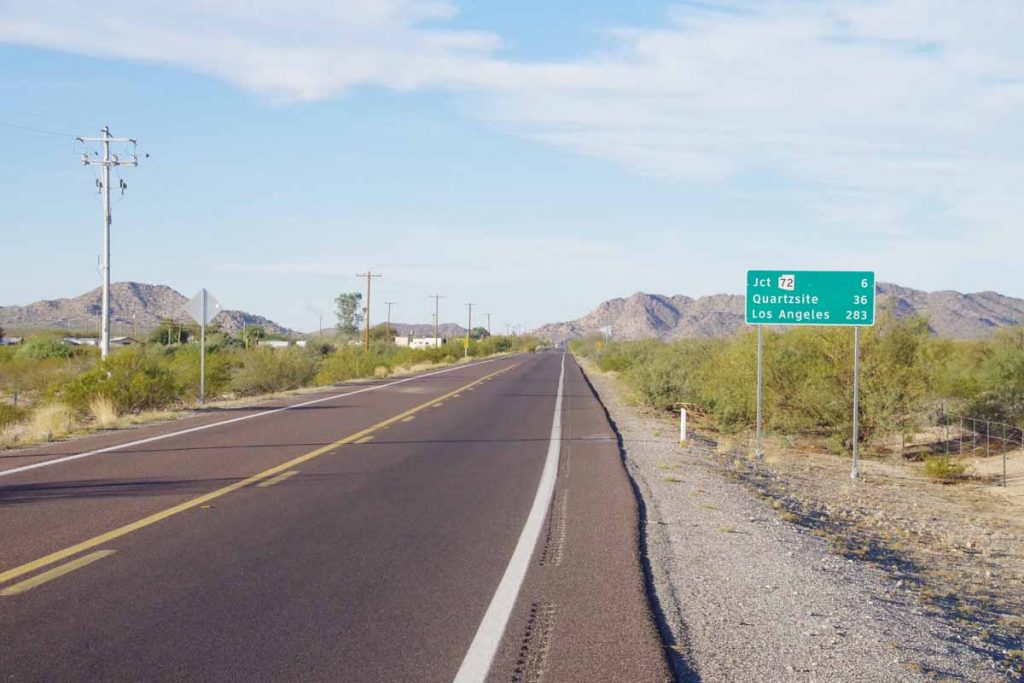 Pleasant cycling without too much traffic as the first 25 miles had many RV parks. 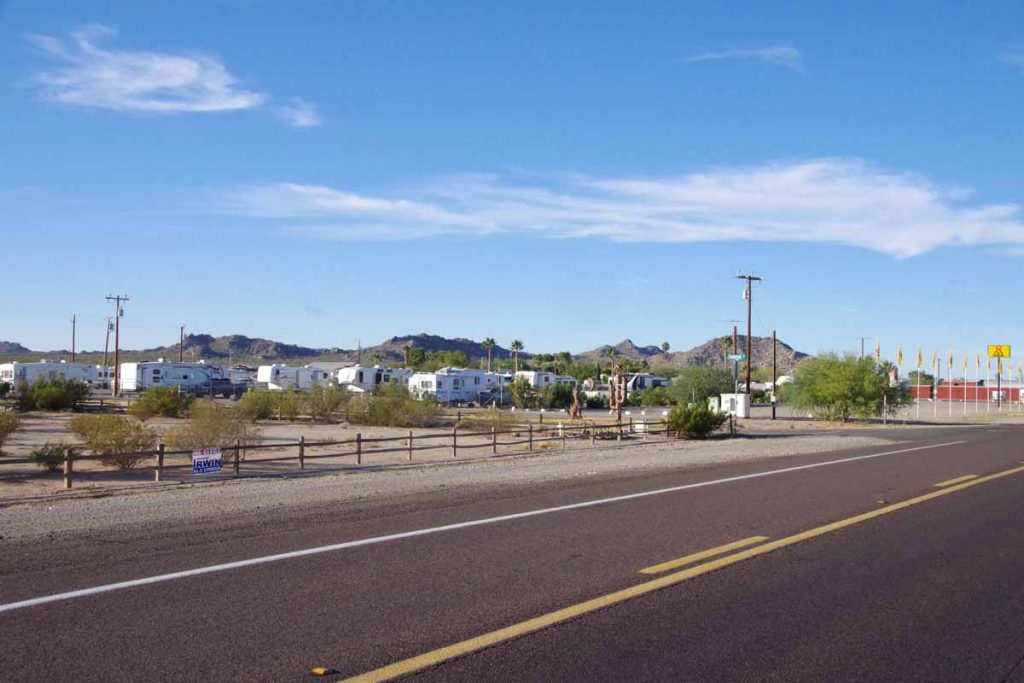 For example the KOA park above. The better ones seemed to at least have a few trees and perhaps other amenities nearby. It wasn’t yet high season as saw a restaurant announcing a November 9th opening as well as “help wanted”. 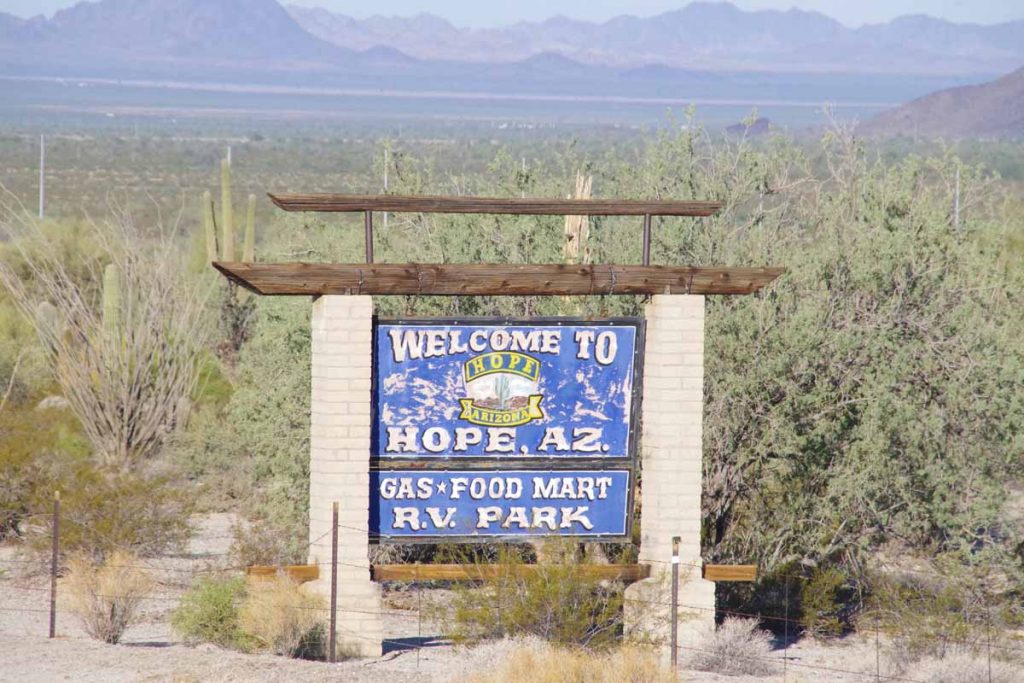 At seven miles I came to small town of Hope. 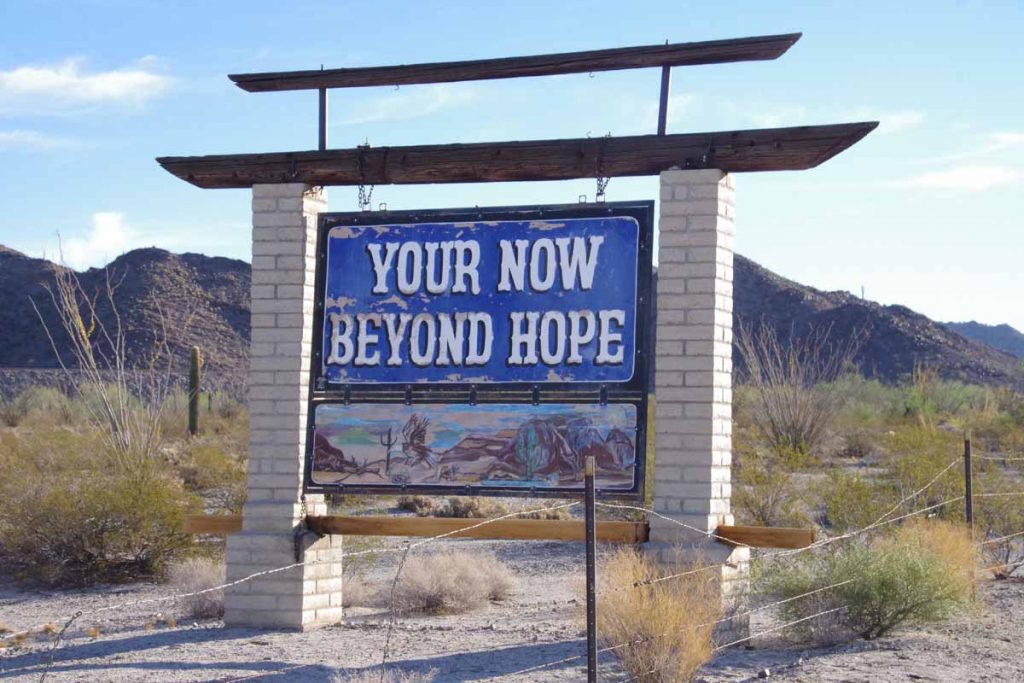 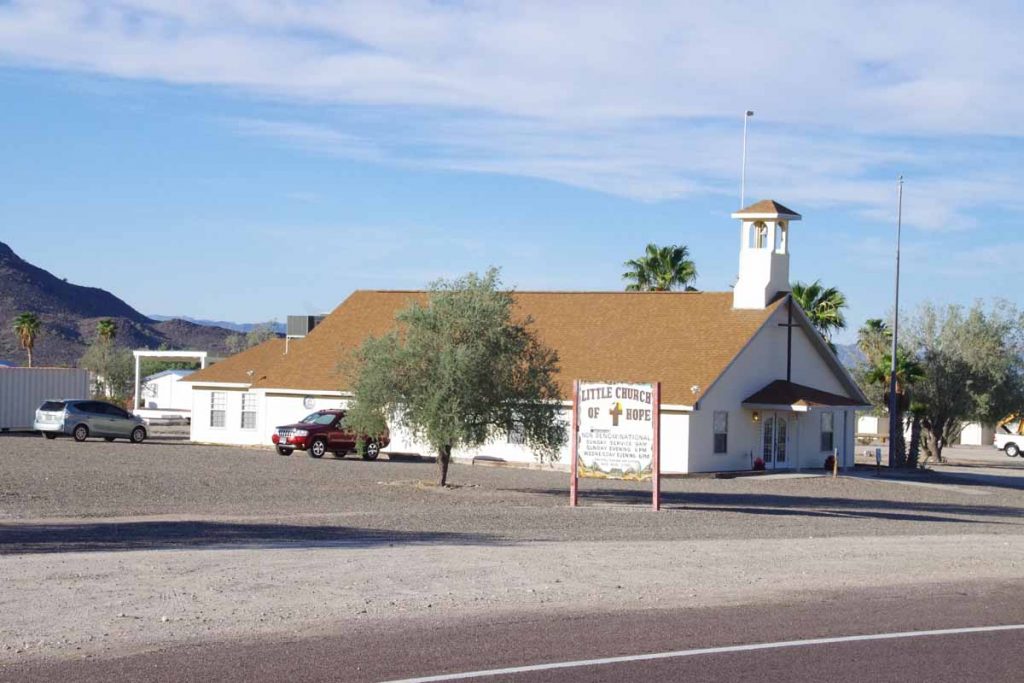 Here is the local church. 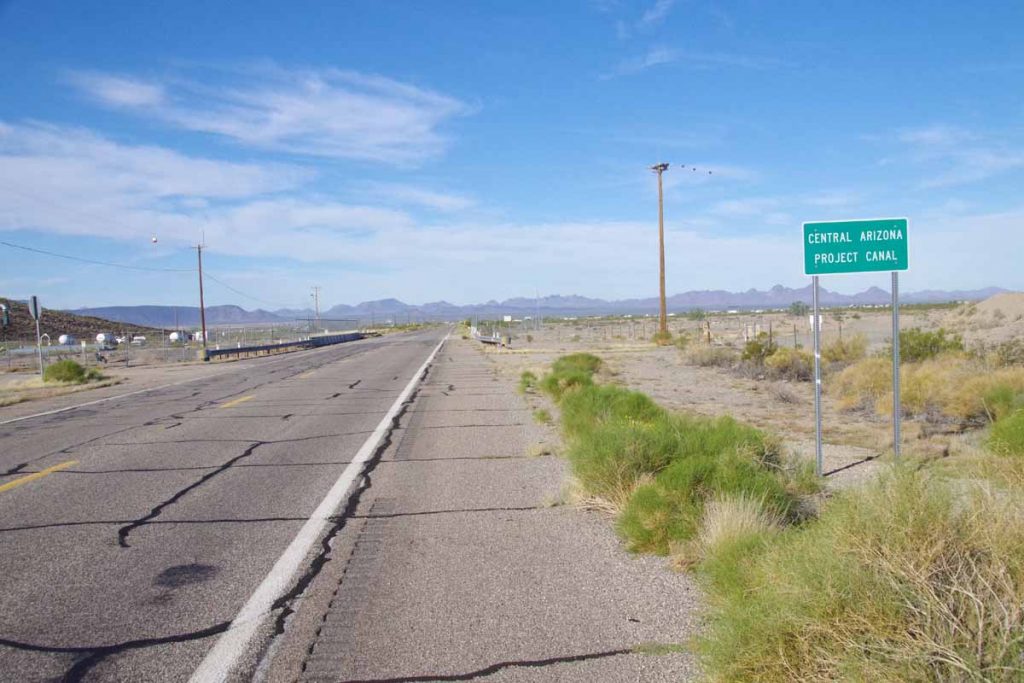 Generally descent in this first stretch as I came below level of the Arizona canal again. 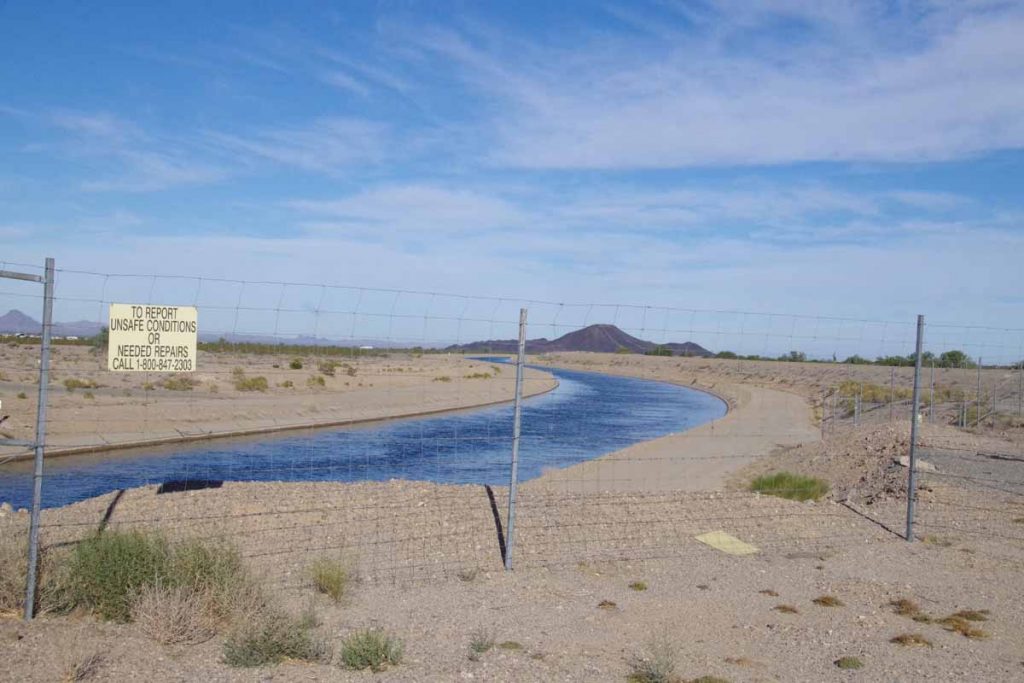 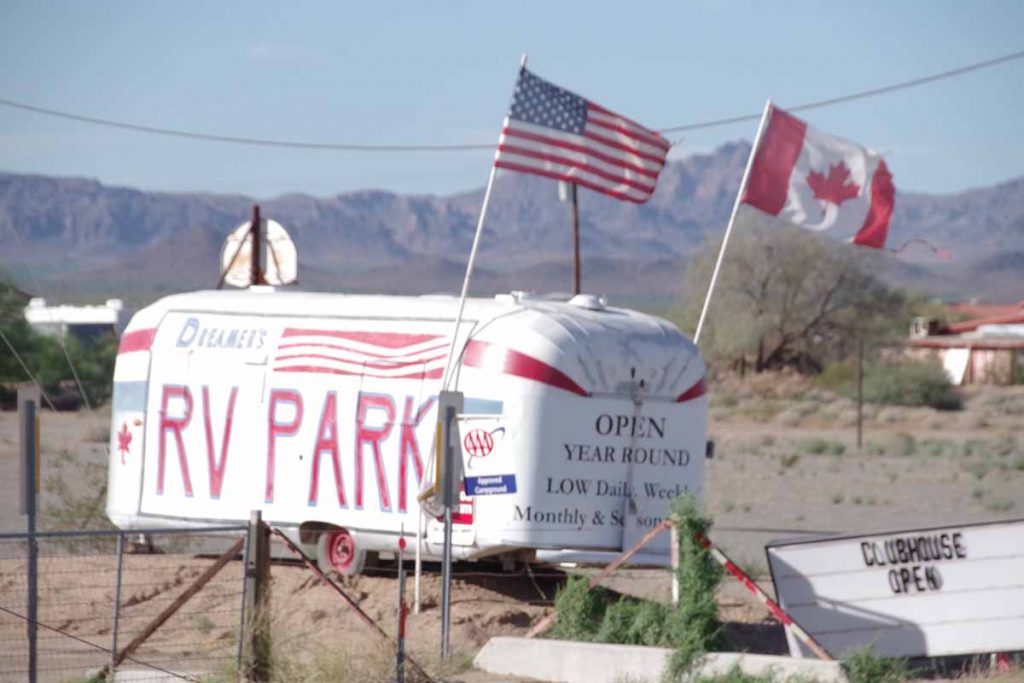 As I came closer to Brenda, there were many RV parks.

This one also still had the cafe closed. 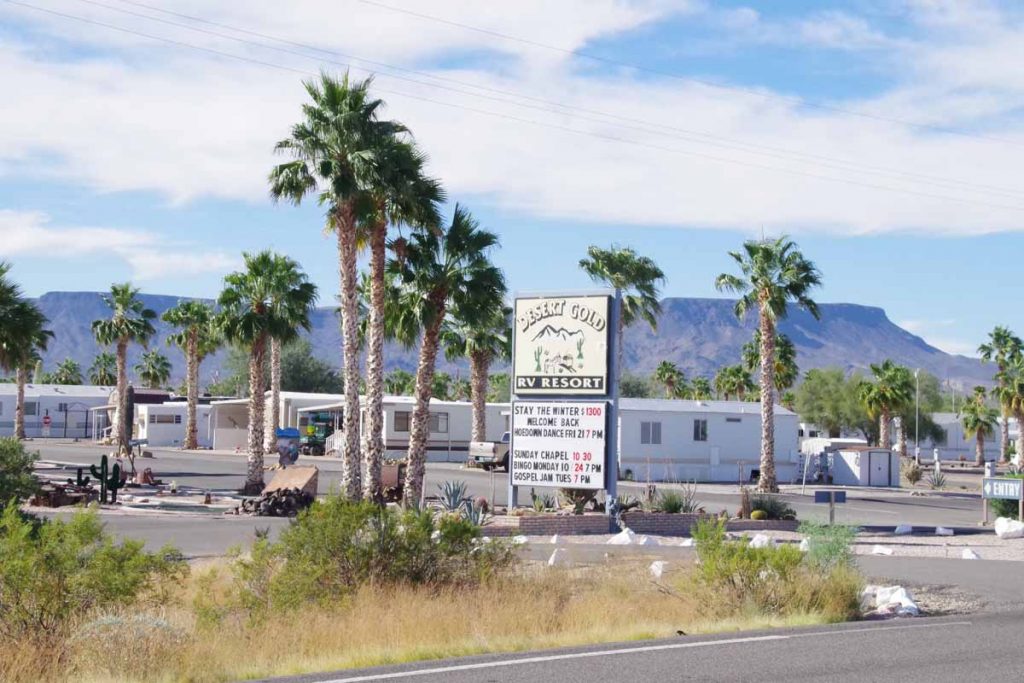 This one advertised rates for the season ($1300) as well as bingo and a gospel jam. 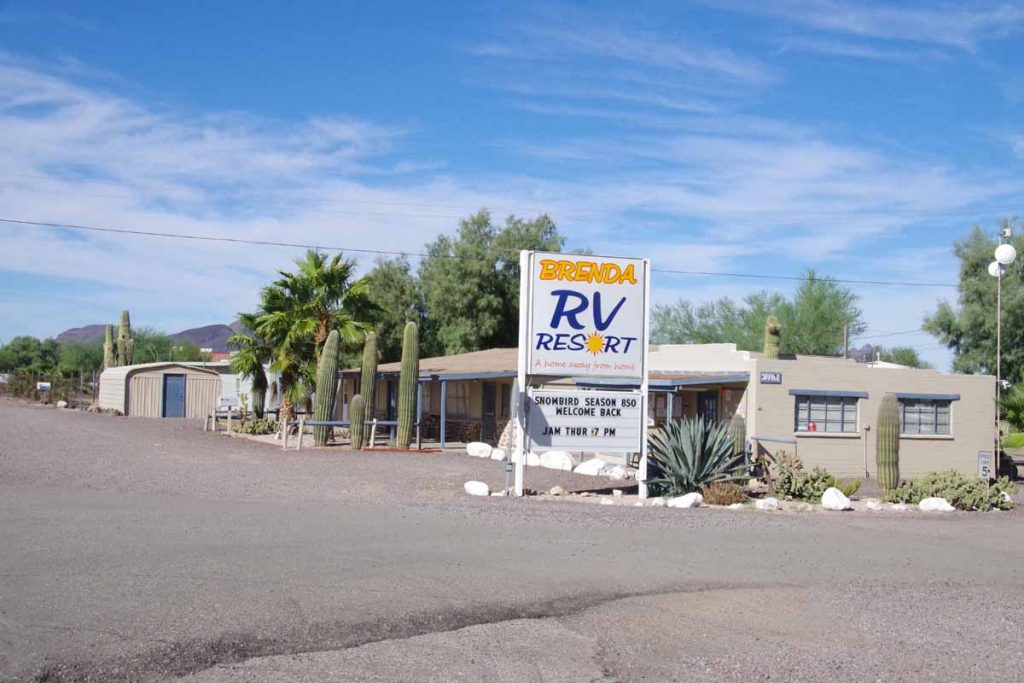 Here one could jam less expensively.

After seeing all these parks (and more), I stopped in Brenda for a bite to eat as well as to understand how this all worked. The clerk told me:

So now we are at start of the season as the parks are all attracting new residents. 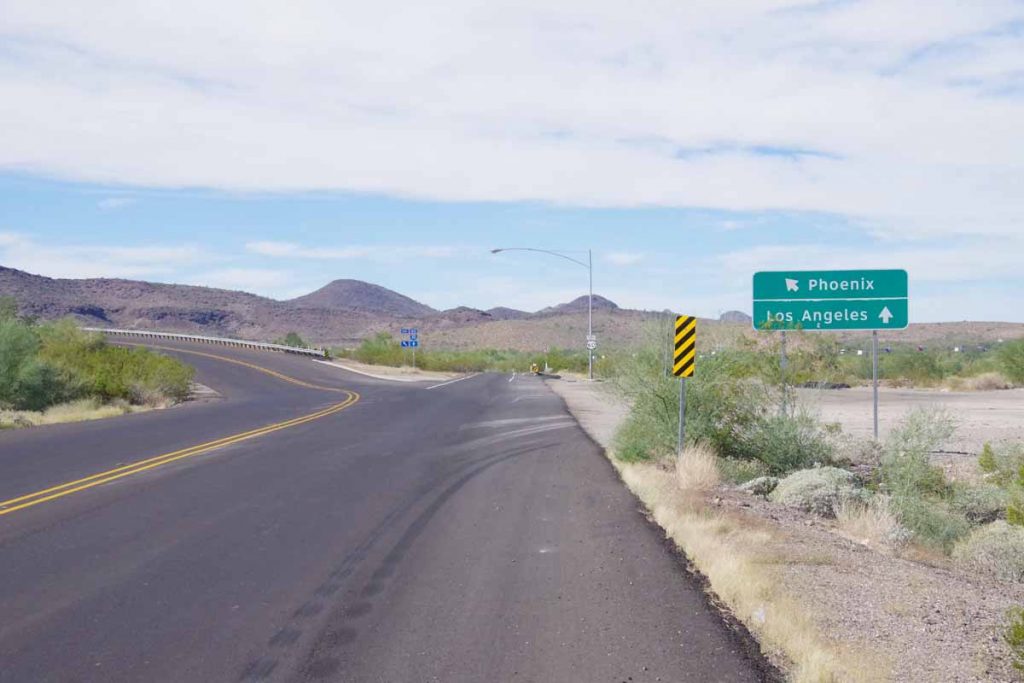 After Brenda, US-60 merged onto the interstate (I-10) and I had 11 miles of interstate cycling. This road is main route between Phoenix and Los Angeles and it was busy. It was also starting to get warm. 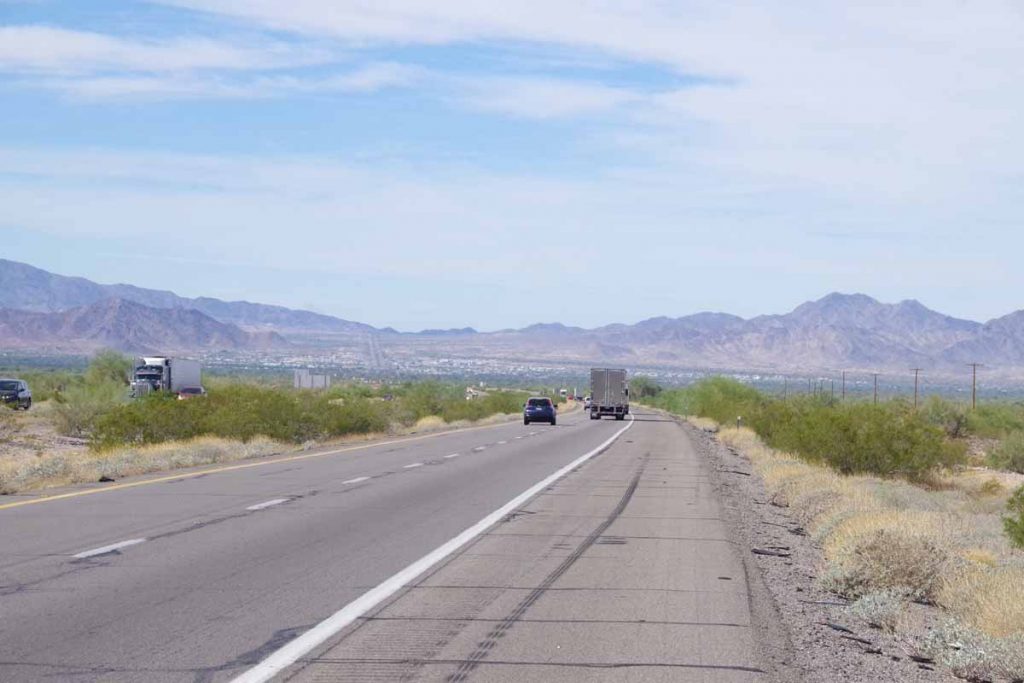 You can see Quartzite in the distance. 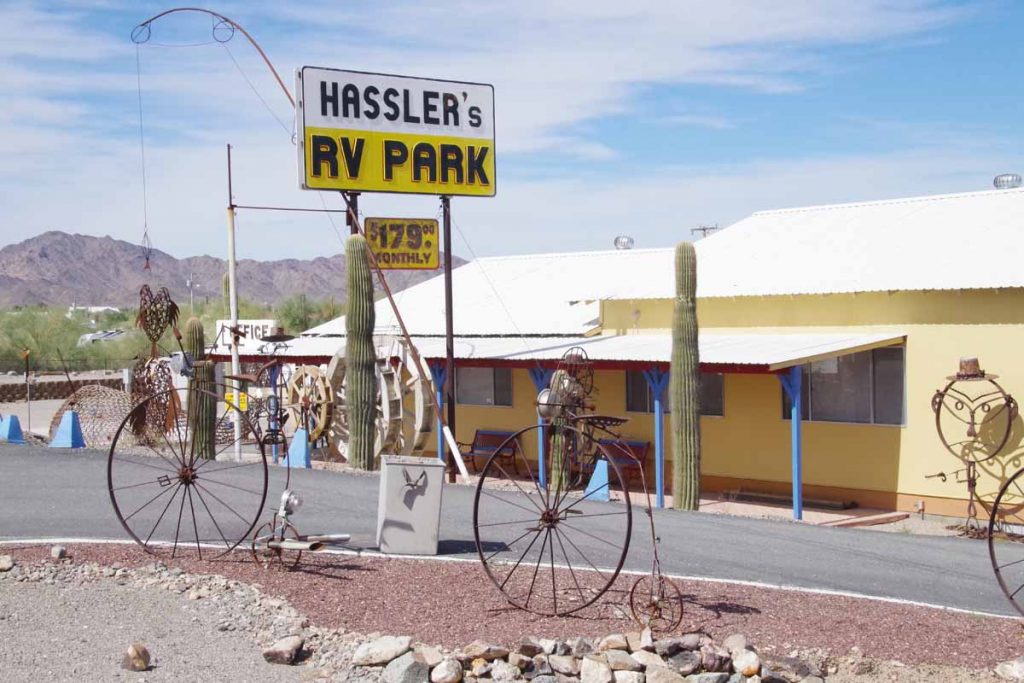 A few more RV parks here, including this one with high-wheeler bicycles. 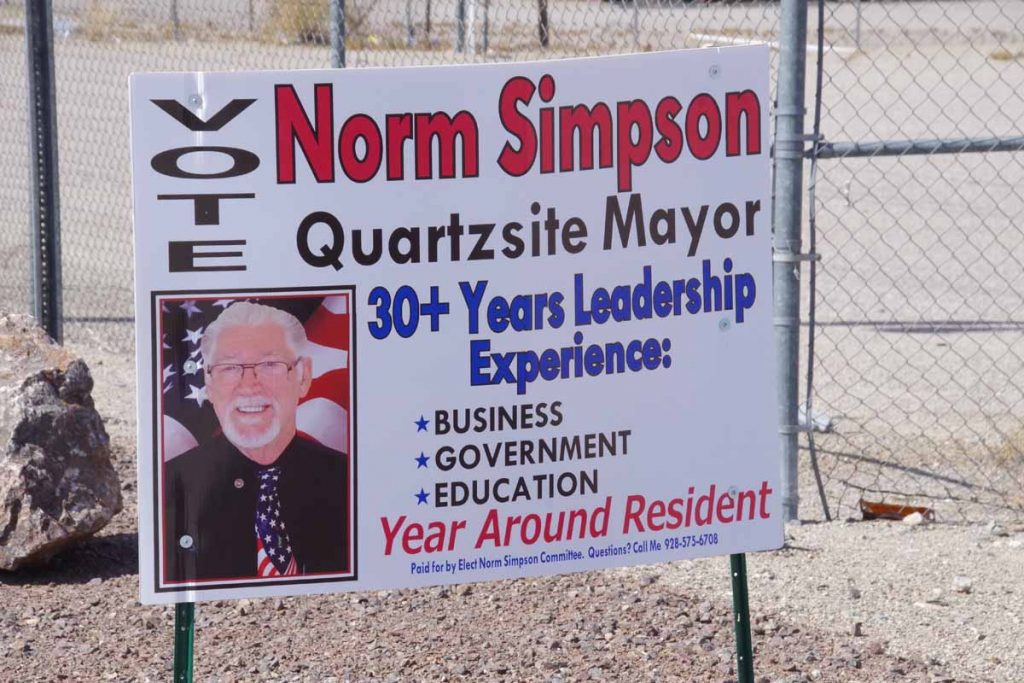 If you run for Mayor, it seems to be important to tell people you are a “Year Around Resident”.

Had lunch in Quartzite. 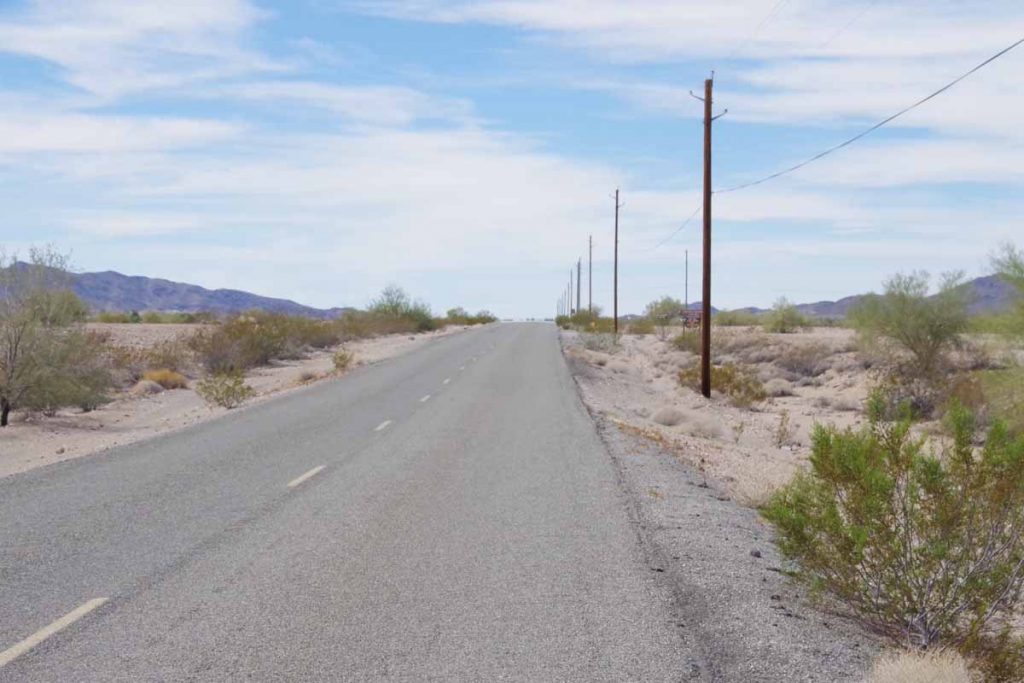 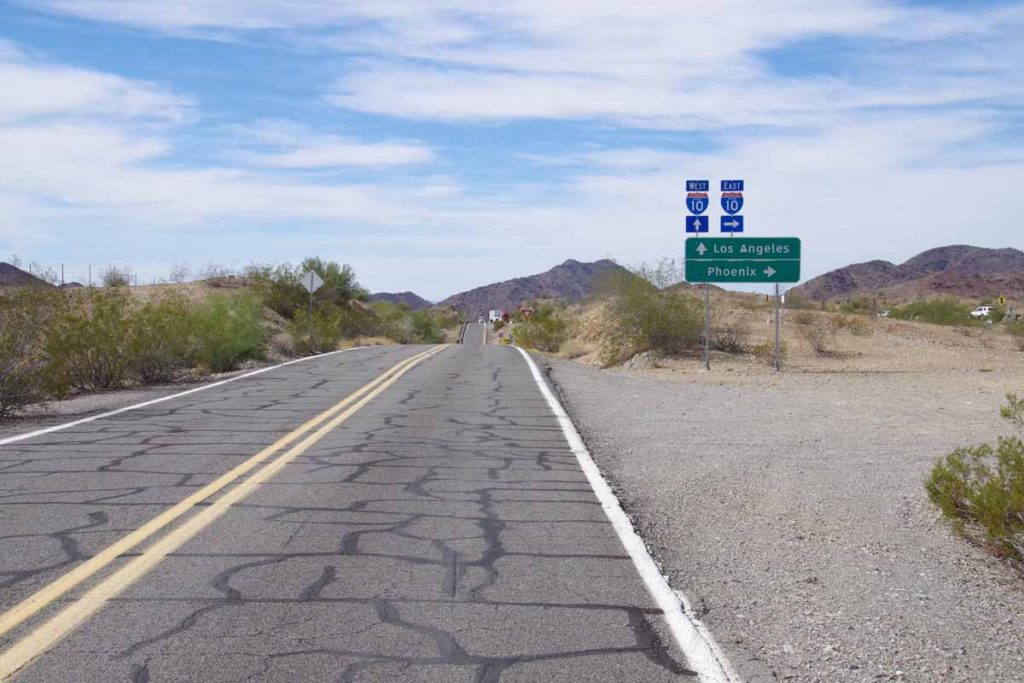 Getting back on the interstate for another 12 miles. While I had done small bits of I-25 (New Mexico) and I-15 (Montana) on this trip, this interstate seemed a bit more aggravating. I decided to do a count of the next 100 vehicles that passed in the right lane:

All this in slightly less than 5 miles. This was only vehicles in the right lane and I didn’t count if they had moved over to left lane before passing. I guess it was a bit more aggravating because of more traffic (other interstates more of the vehicles could move over to left), 75mph speed limit (vs 65mph in New Mexico), lots of trucks and later in the day and a bit warmer. Nothing dangerous, just a bit annoying. 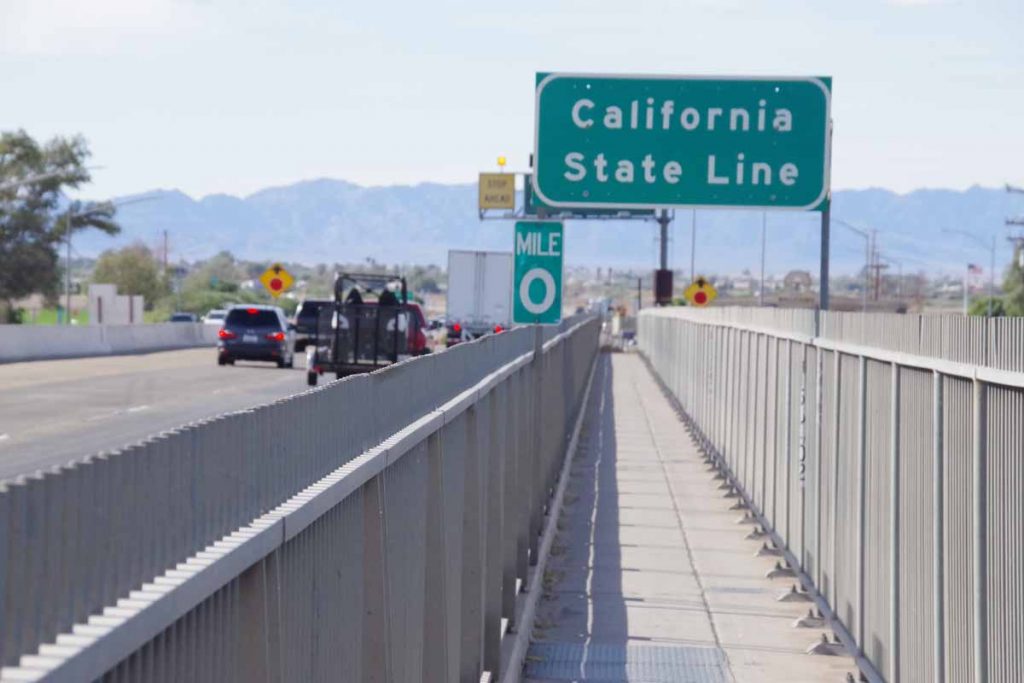 Fortunately, after 12 miles of interstate riding, the exit brought me to the frontage road and then the pedestrian bridge over the Colorado River. Also the border to California! 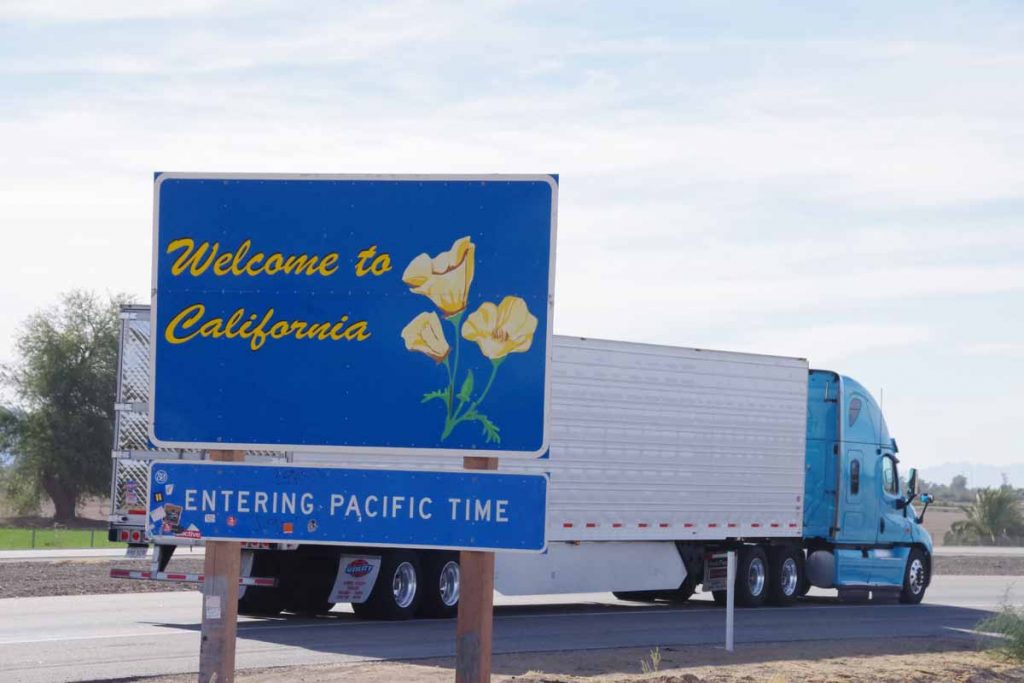 More official welcome sign a few miles later. Cycled into town and nice to finish the day with a motel. From here there is a bigger gap to the next town so likely some desert camping in between.