Two days riding has brought me to the Imperial Valley. 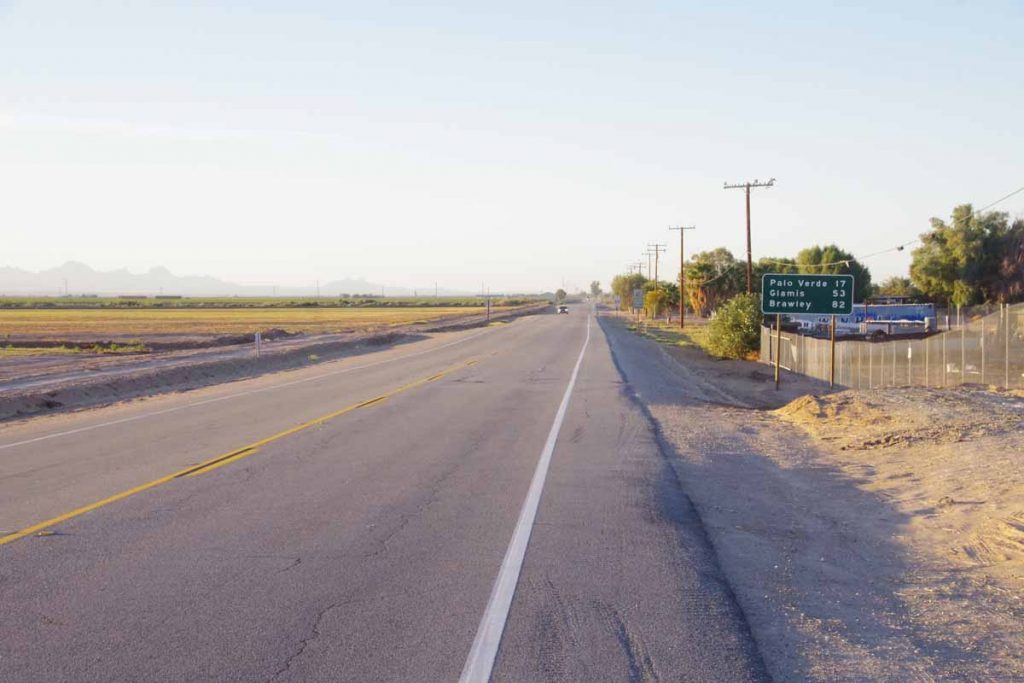 The Adventure Cycling Map warns “Services are extremely limited between Brawley and Palo Verde and may be closed seasonally. Plan accordingly and carry food and water”. There were ~20 miles to ride to Palo Verde and sign above summarizes the challenge. Google told me there was a store at Glamis which closed at 3pm – so goal for first day was to get to Glamis before the store closed and then assess whether to continue to Brawley or camp nearby. 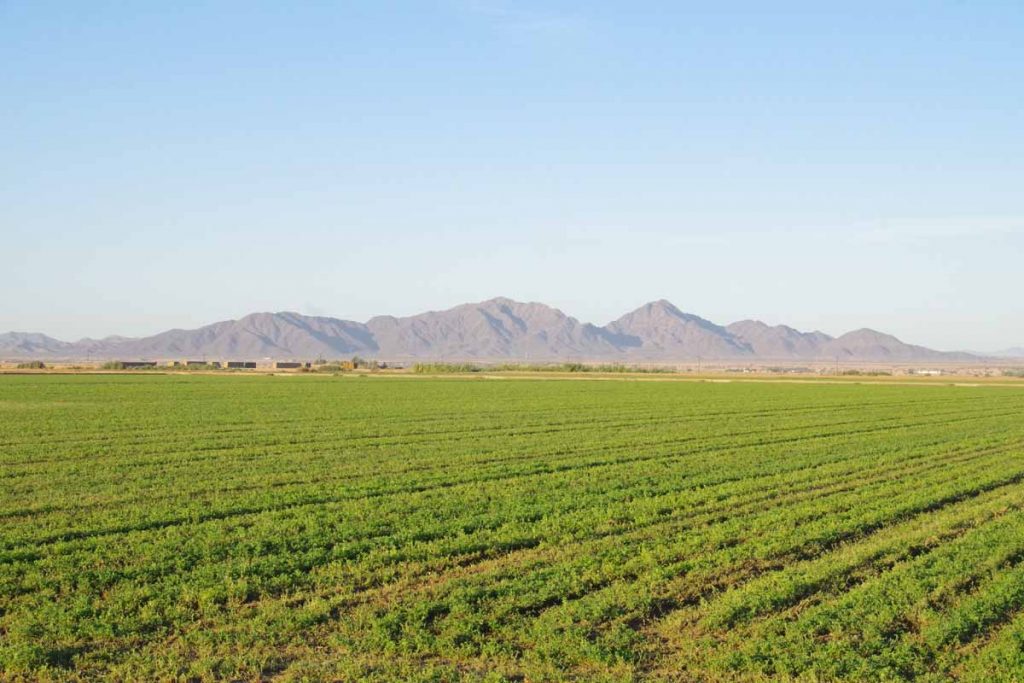 It was still nice and cool as I cycled past flat agricultural areas. 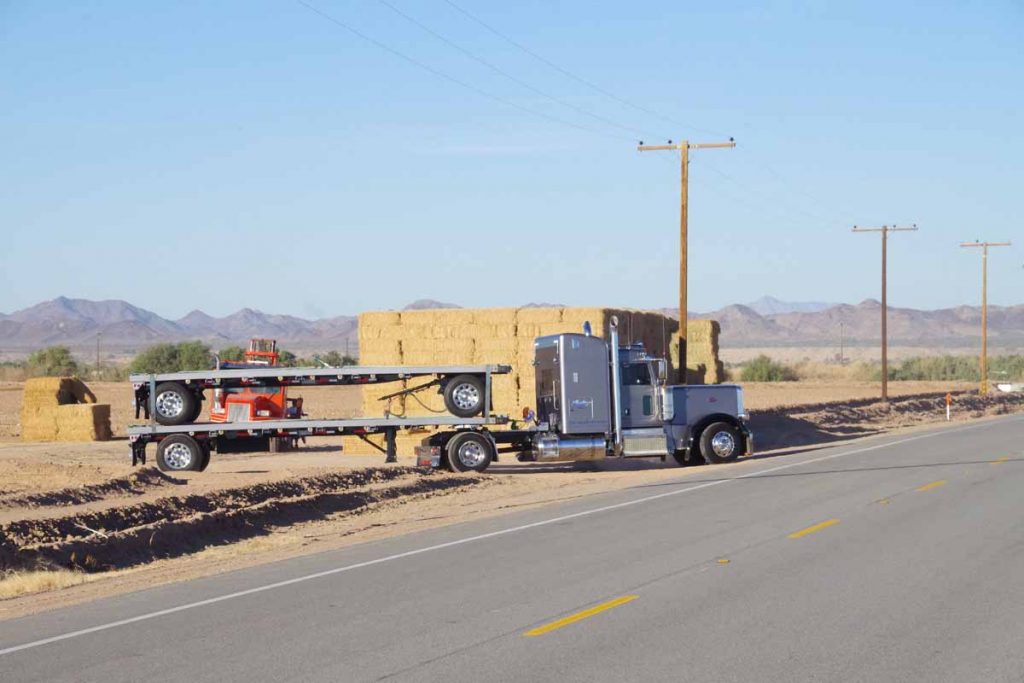 These guys were in process of unstacking the trailer and then loading a double-length trailer with hay. 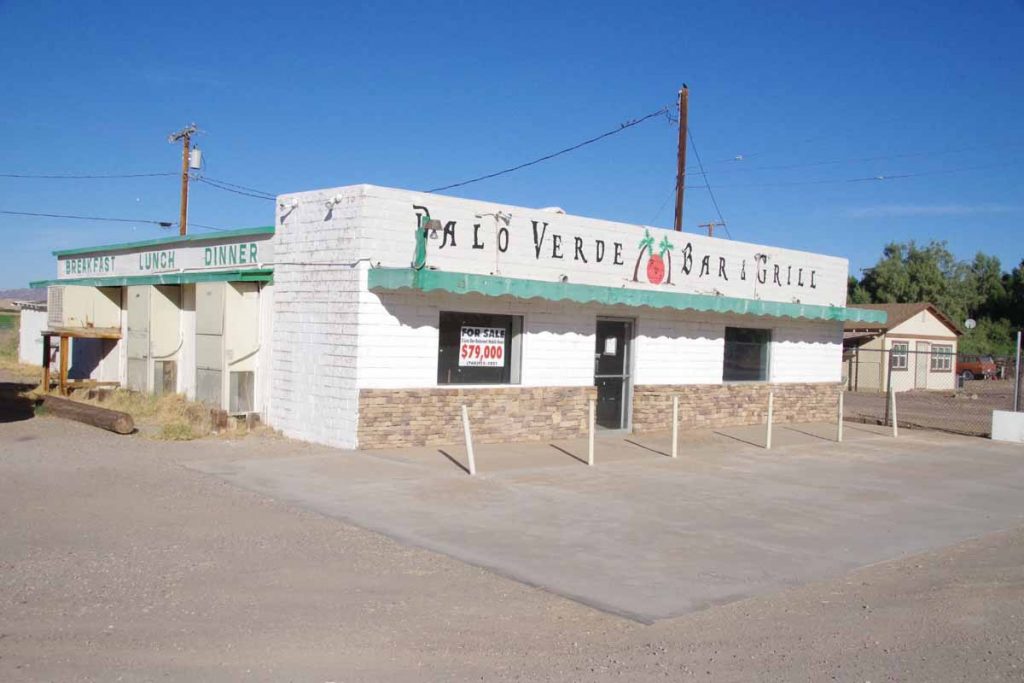 There wasn’t much in Palo Verde, though for only $79,000 you could own this restaurant!

Across from the closed restaurant was “Wheelies” gas station. I topped off on water and bought two extra Gatorade for a total of ~6 liters – which I figured should be more than enough, perhaps even to cross the entire gap. 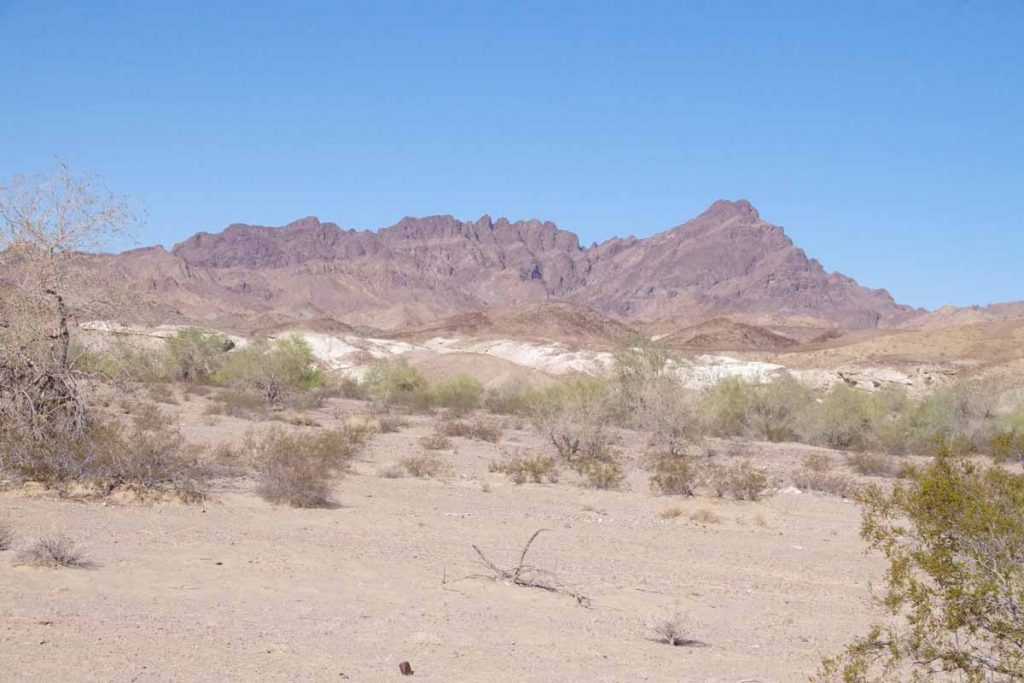 A few miles of farmland and then the route climbed up past dry desert landscapes. 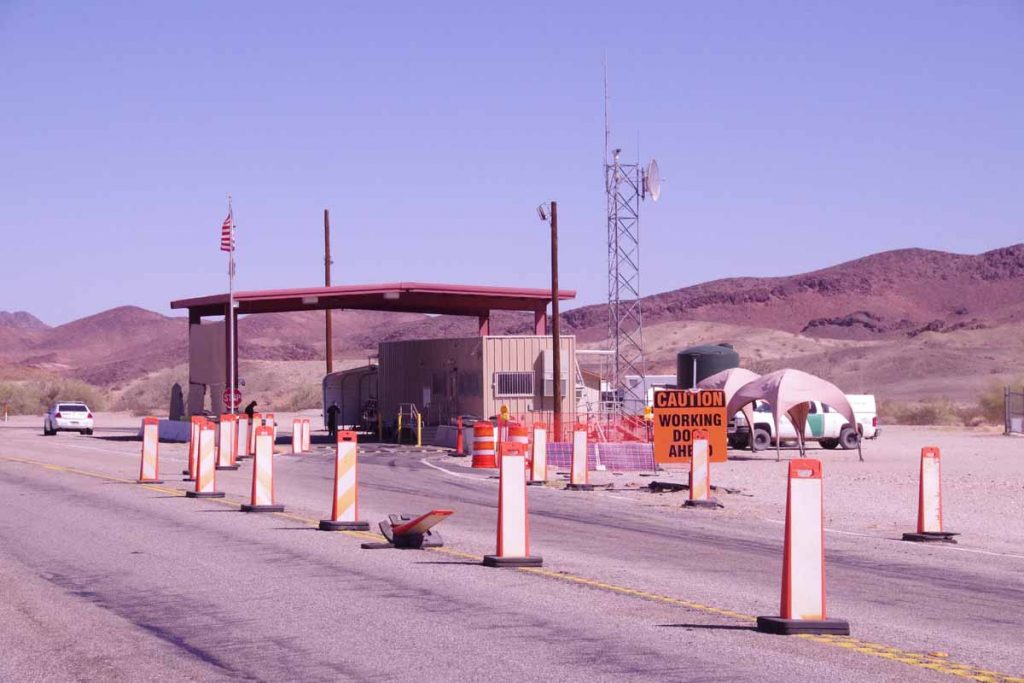 The Border Patrol had this station to check vehicles coming the other direction. 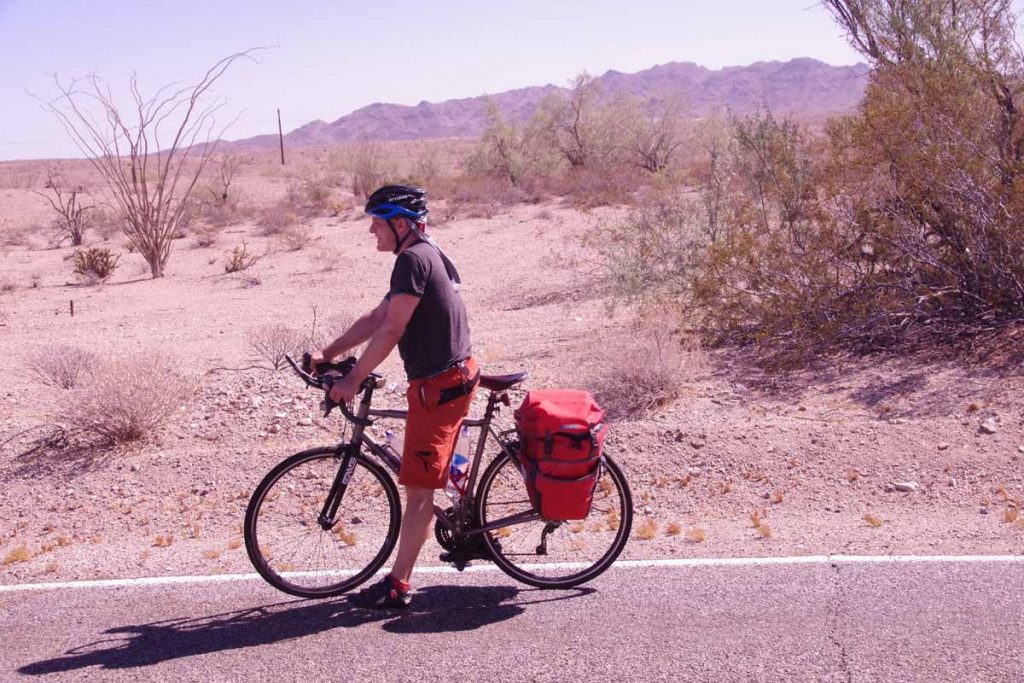 I met a cyclist riding the Southern Tier for his fifth time. In this area the road was a bit frustrating since it went up and over a lot of the same hill. Rather than climbing elevation I would go up to 925 and down to 875 and repeatedly. Fortunately, not long after climbed to highest point and with fewer ups and downs. However, the wind started to pick up. 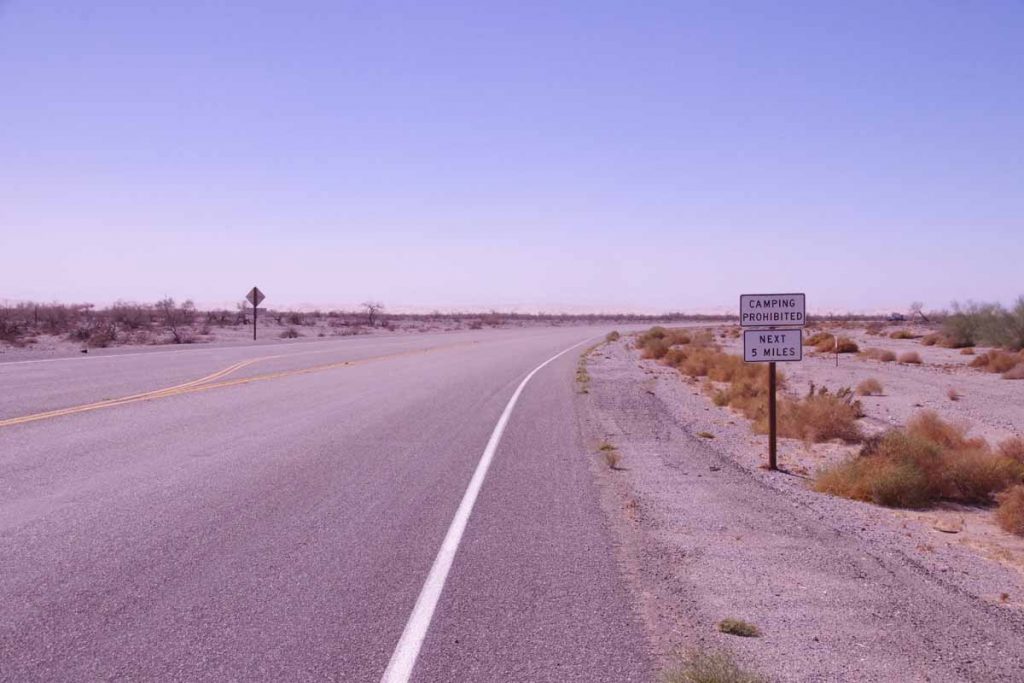 I came past a large mining area and then as I came close to Glamis these signs prohibiting camping. 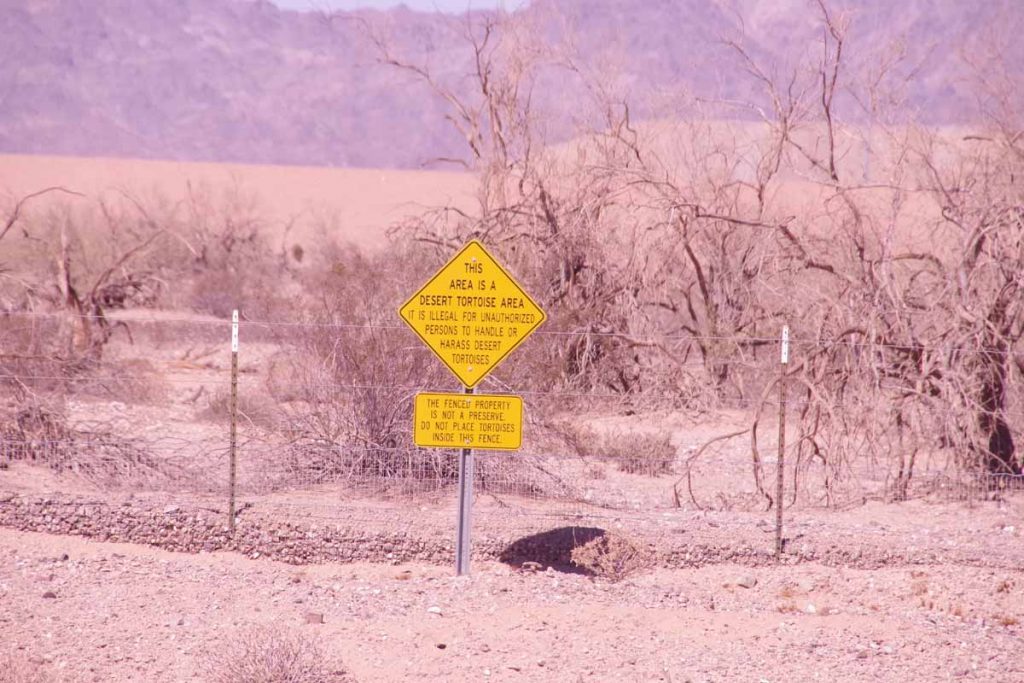 Not sure if it was because of the tortise or the mines or other reasons. 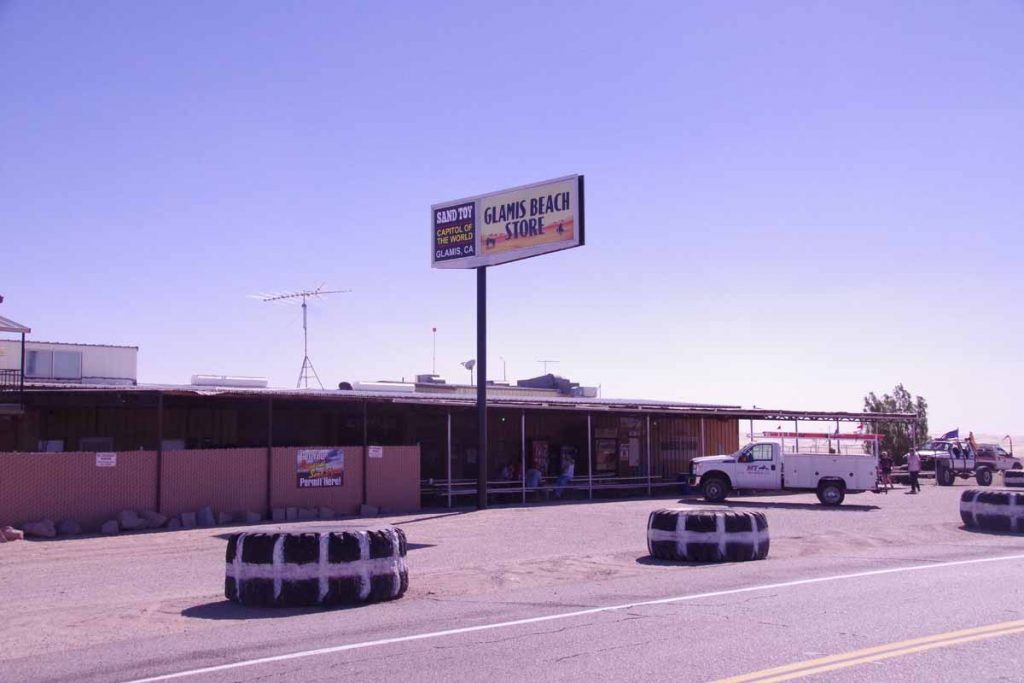 At 60 miles I reached Glamis. Only 1:45pm so I made my 3pm target. I refilled on water and assessed the situation. It was only 27 miles to Brawley and I had enough time. However, the headwinds were now 15-20mph with occasional gusts. I decided rather than fight the wind, would see where I could camp.

Glamis was an interesting place – particularly attracting those who come to play in the dunes with ATVs, dune buggies and other vehicles. Seems like particularly focused on getting people out for a long weekend of camping in the dunes. 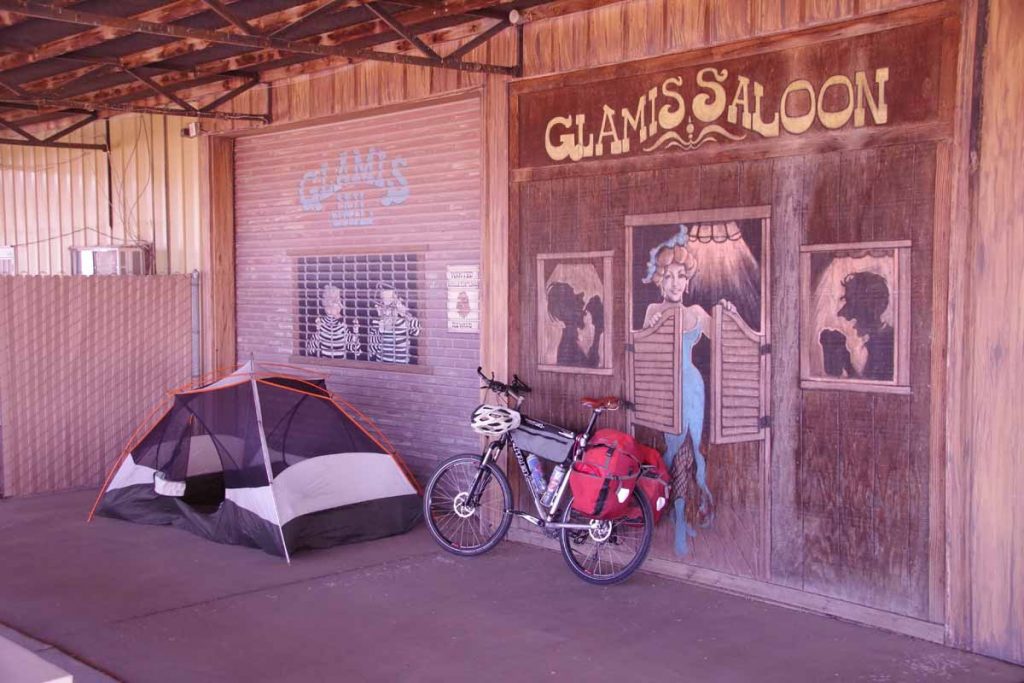 I asked the store owners and they said I was welcome to camp underneath the store awning. So I camped next to the jail mural and the saloon mural. It was nice shady place to camp. The railway nearby is active day and night with a train every 1-2 hours. I was told this was a north/south line heading from Los Angeles to Mexico. Otherwise nice place to camp. 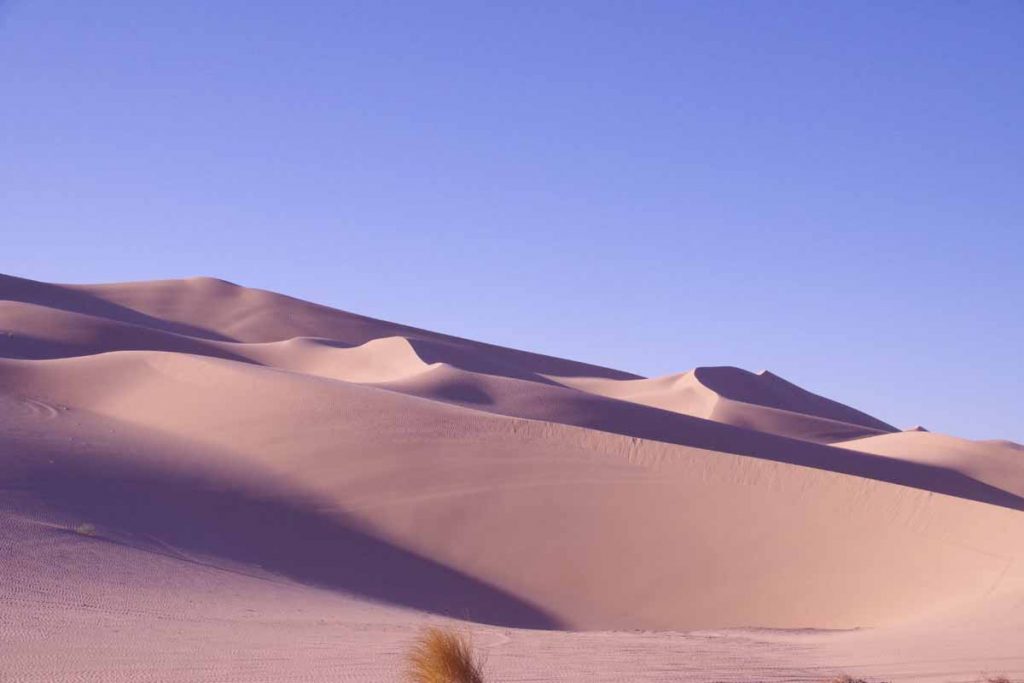 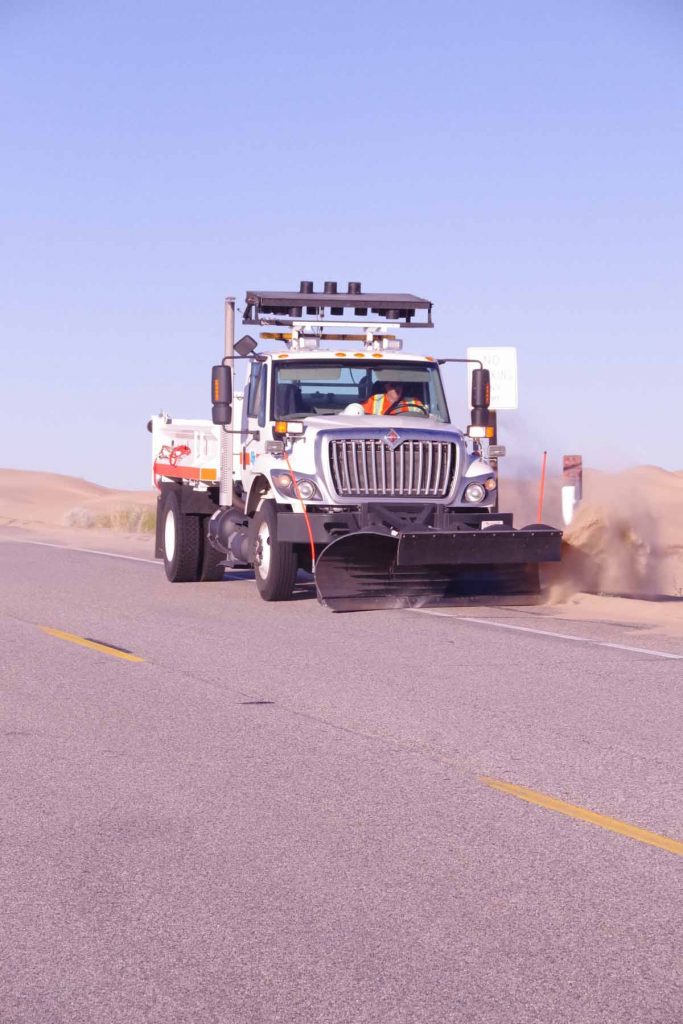 A sand plow was grading some of the excess sand from the road. 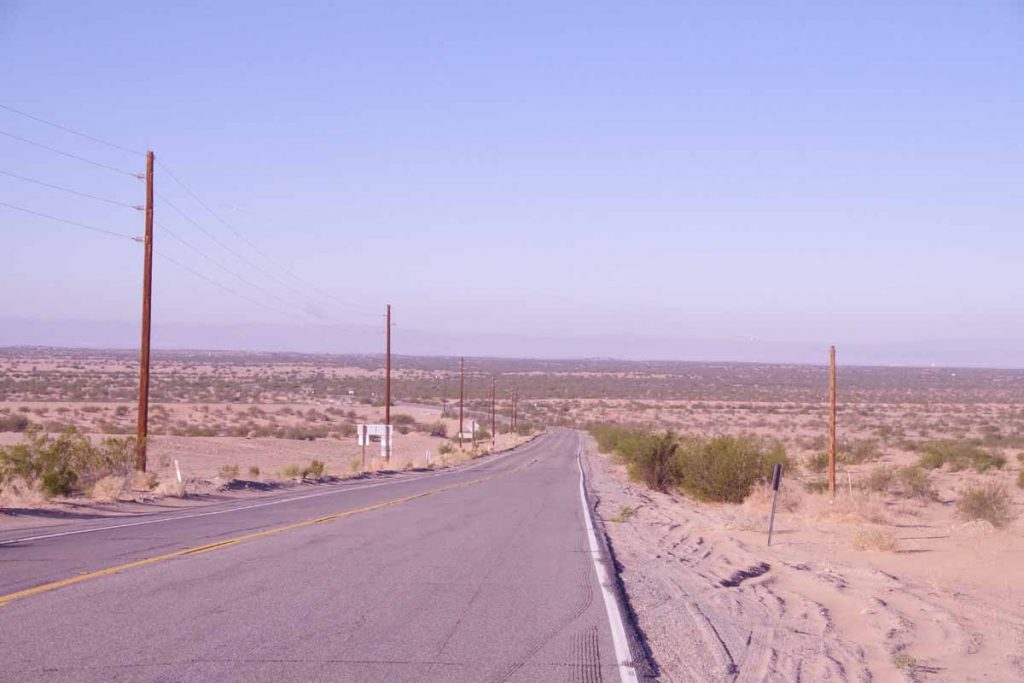 After seven miles the dunes stopped and it was dry desert again. 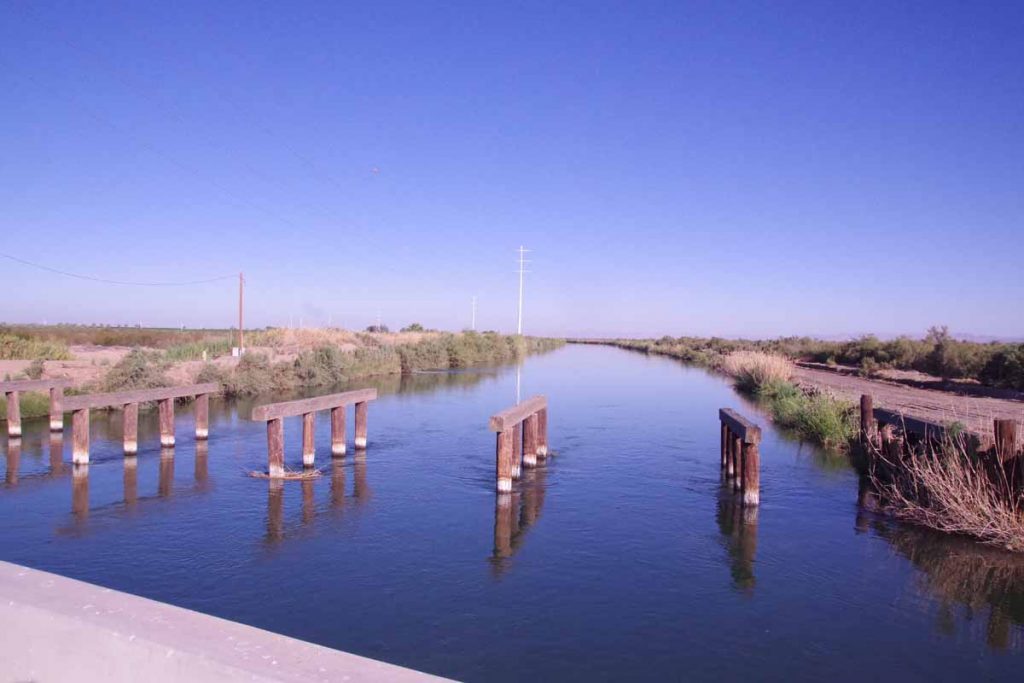 Another seven miles brought me to edges of the irrigated regions. 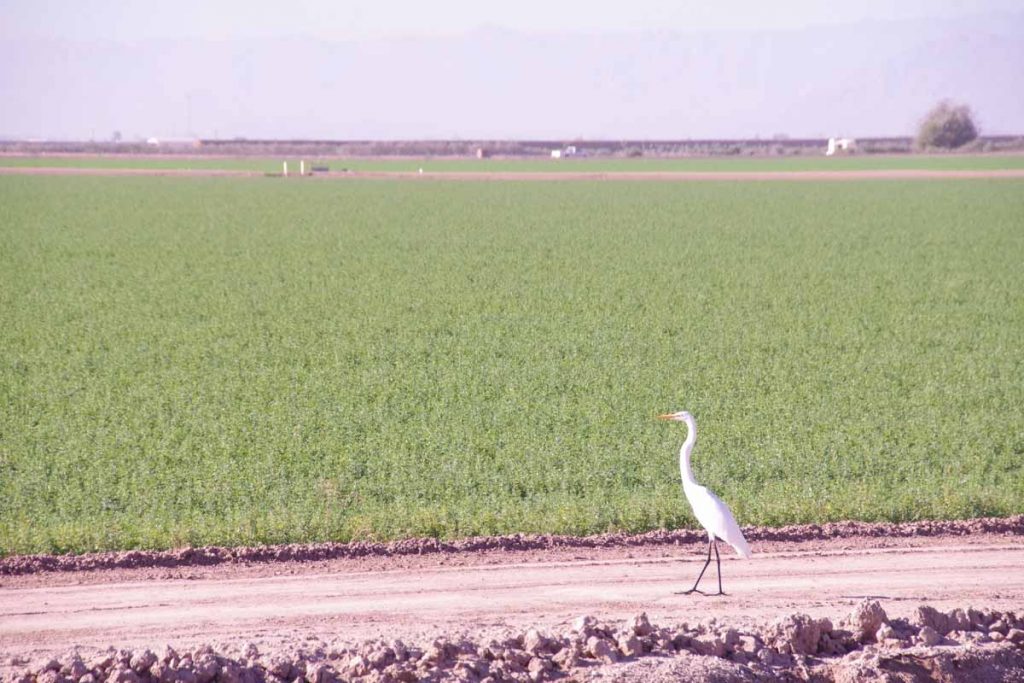 Both dry dusty fields and green ones like this one. 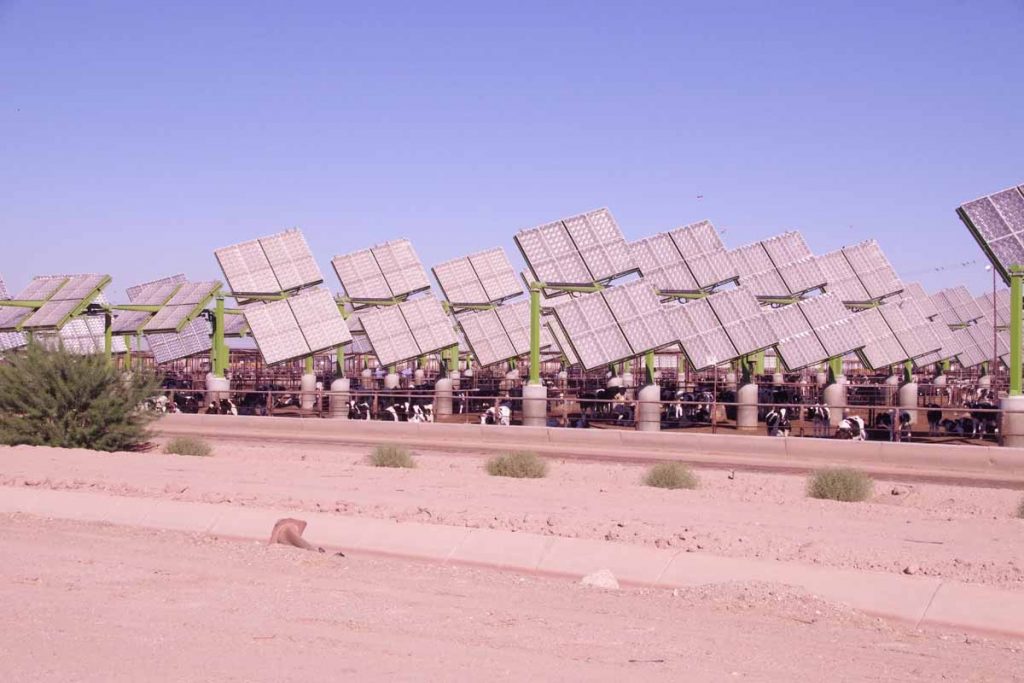 Having a combination of feed lot and solar array was interesting. 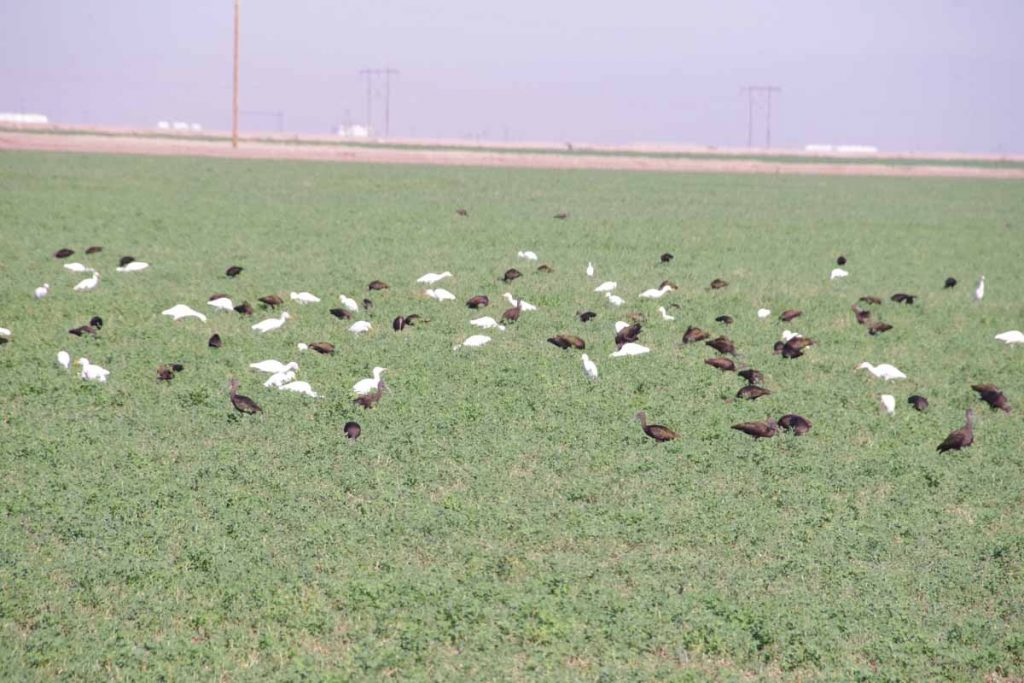 Some fields had a lot of these birds. 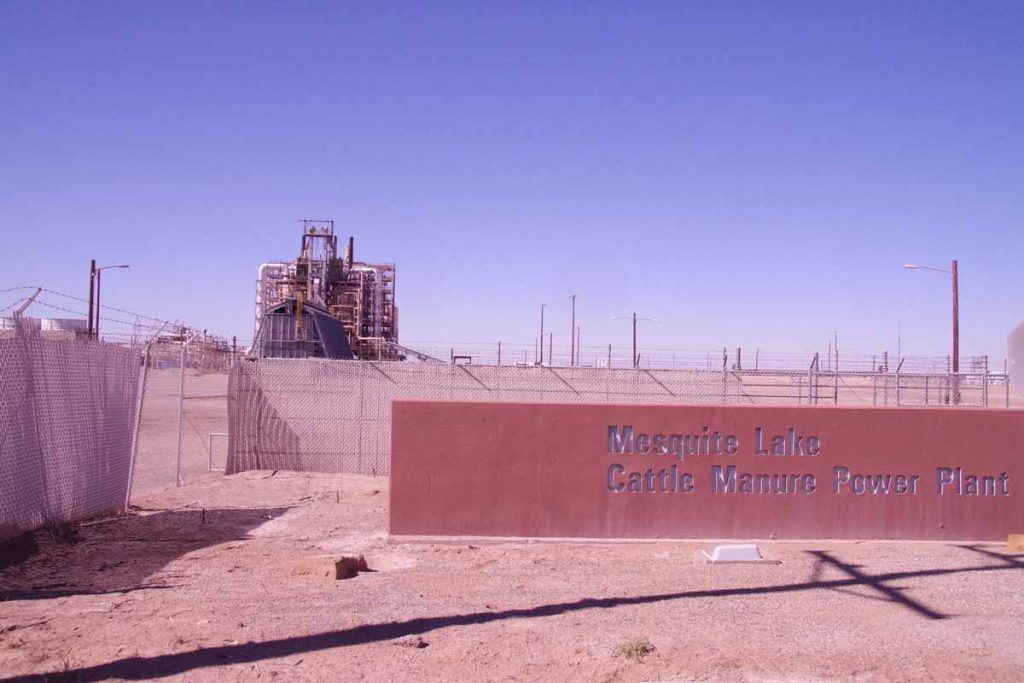 I stopped in Brawley for early lunch and then cycled the last 16 miles to El Centro. It was getting warm and hence nice to have slightly shorter day. El Centro has a surprising number of motels and least expensive prices I’ve seen so far.

Maps tell me I am now ~125 miles from San Diego including climbing up and over the coastal mountains. Expect tomorrow to tackle the first of these hills and hopefully also get to slightly cooler temperatures. Also starting to make plans after reaching San Diego which roughly summarized are: (a) take train to Portland, OR to pick up my wheel (b) take train back to Austin to spend few weeks preparing/refitting for rest of the trip (c) Thanksgiving in Colorado (d) return to San Diego, cross the US/Mexico border and continue southbound.