Is it better to know about the road ahead or to remain blissfully unaware? Today was a good example of the tradeoff. I’m normally in the camp that likes to know what is ahead so I can learn from others experiences and do some planning of my trip.

So yesterday I made a reservation at Jacumba Hot Springs so I could watch the debate. After that I read what others had to say about the route. I was surprised. I already knew there would be a solid climb from below sea level to over 3200ft. However, other reports seemed to include four additional challenges that had made their trips fun: (a) the 20 miles from Seeley to Ocotillo supposedly had an extremely rough road, some commented as the “worst on the entire southern tier” and others did inventive things like sneak on the interstate, etc (b) the climb on I-8 had two bridges with minimal shoulder (c) some complained of heat over 100F and even hotter (d) winds could be fierce. 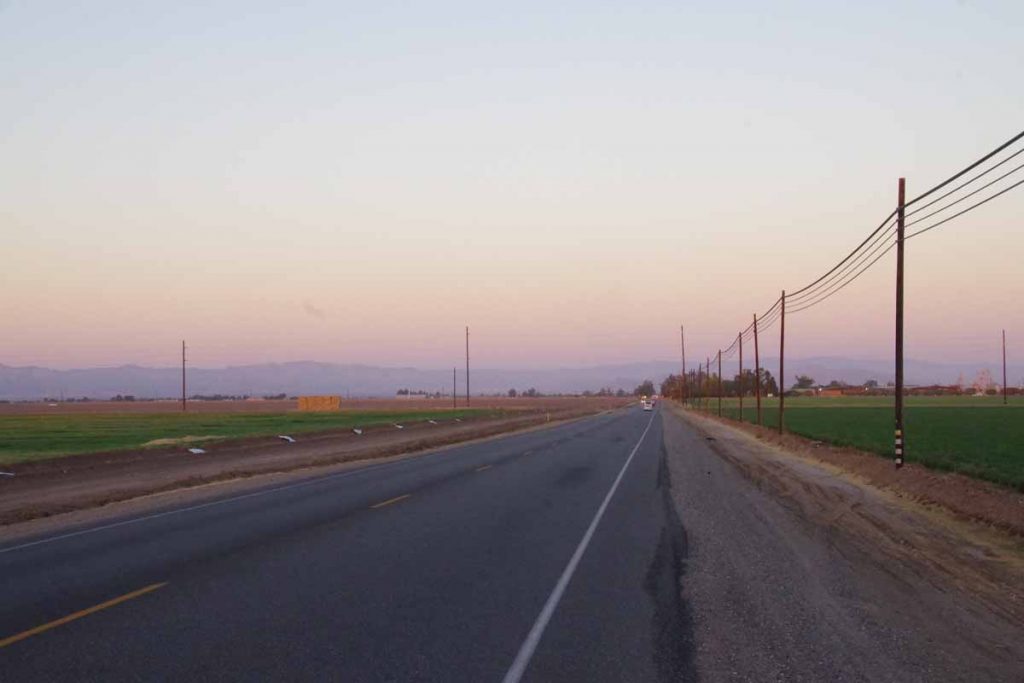 After reading those accounts, I thought “wow! is this going to be a really rough day?” Fortunately, it turned not to be as bad as anticipated.

I got on the road twenty minutes before sunrise – to give myself some cool morning cycling and stay ahead of wind if it picked up. 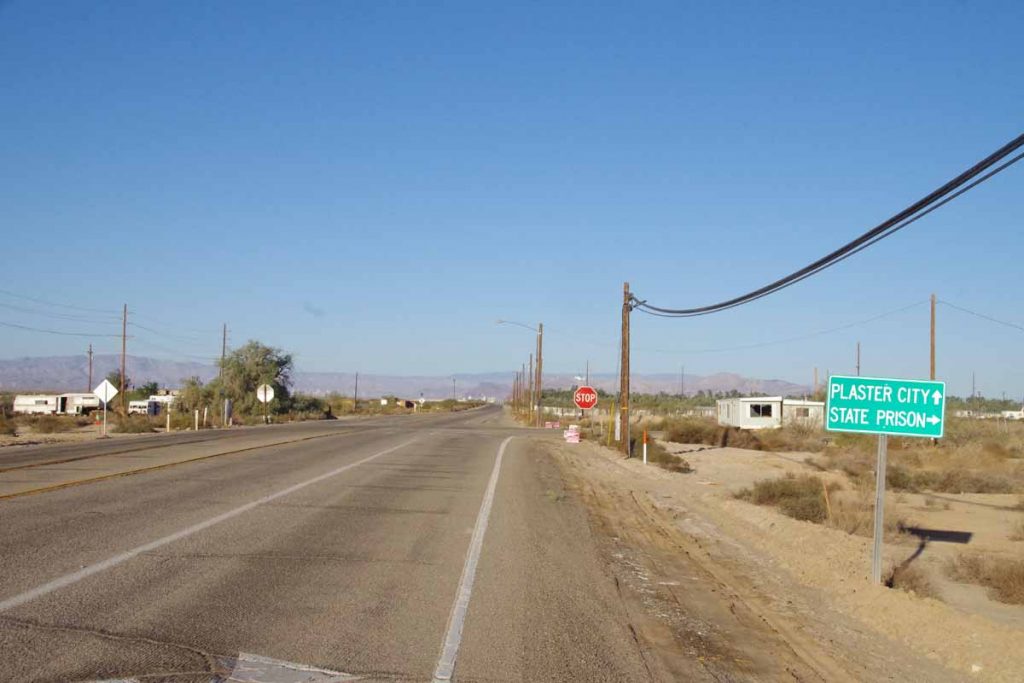 The first seven miles cycling to Seeley the road was fine, only getting a bit rough once I came into Seeley. I stopped at convenience store and clerk told me the road was OK until the stop sign. There was a lot of traffic on the road, but turns out it all turned off in direction of the prison. After the stop sign it was much quieter riding. 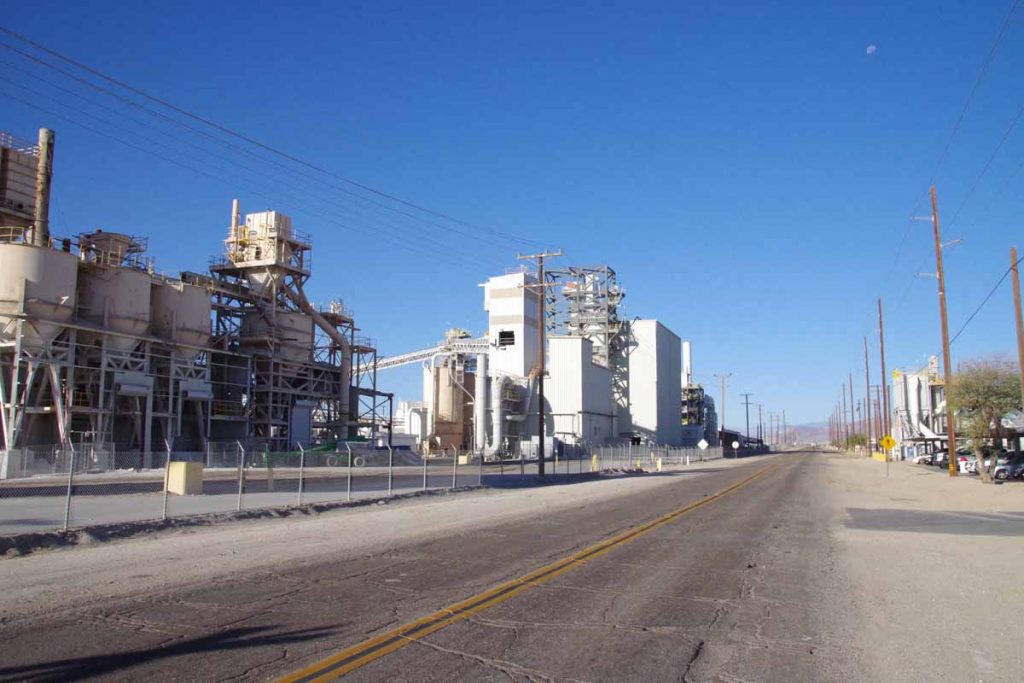 At 17 miles was Plaster City. This was mostly a large plasterboard factory and nothing else. 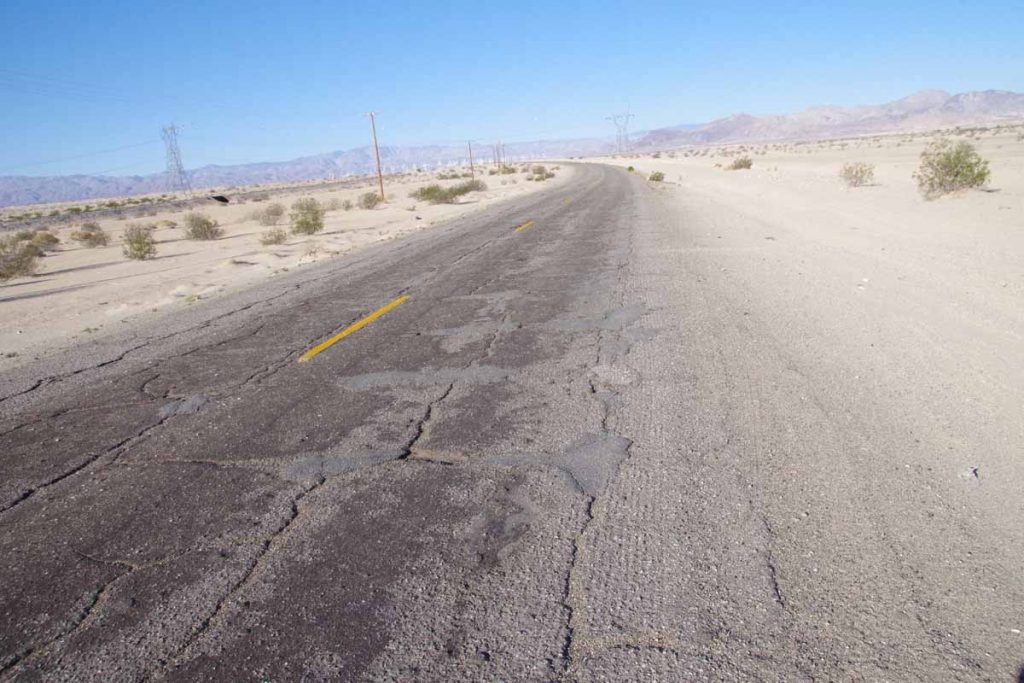 The road was rough both before and after Plaster City. However, my expectations had been set for something a lot lot worse. On my trip so far, at least half of the gravel roads have been rougher. I also thought, “this would pass for smooth road in Ukraine”. So while it wasn’t smooth pavement, it also certainly was better than I expected. 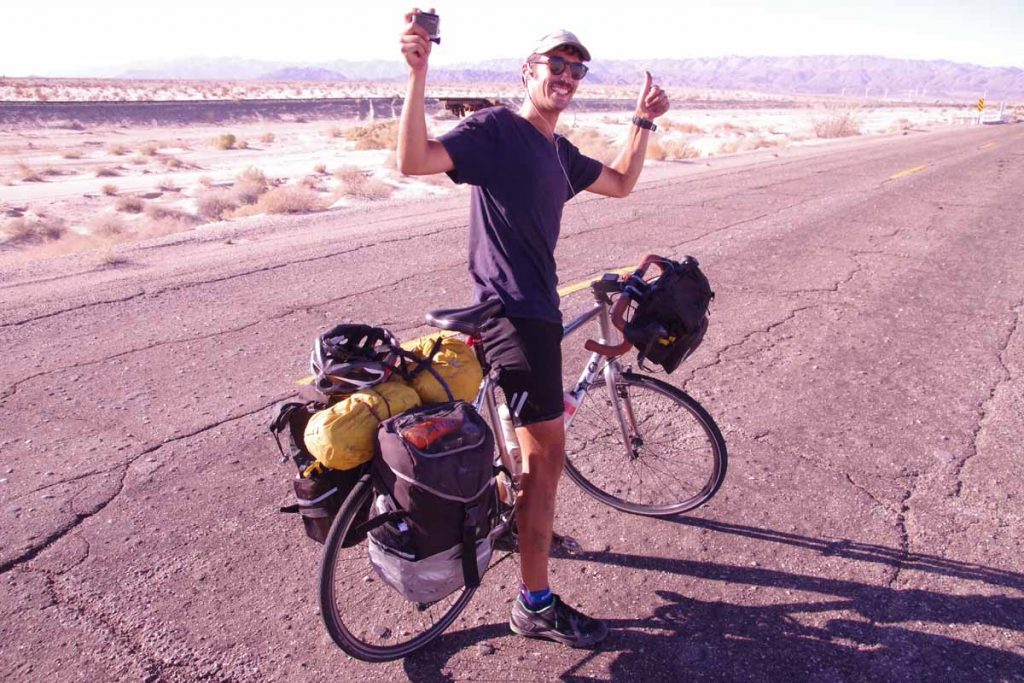 I met a cyclist here who was on an around the world trip on combination of motorcycle and bicycle. He was from the UK and had started with ~30,000km across Russia, Mongolia, Japan and other places before switching to a bicycle where he had ridden another 6,500km so far. His goal was to ride across USA to Florida and then circle back to the UK. 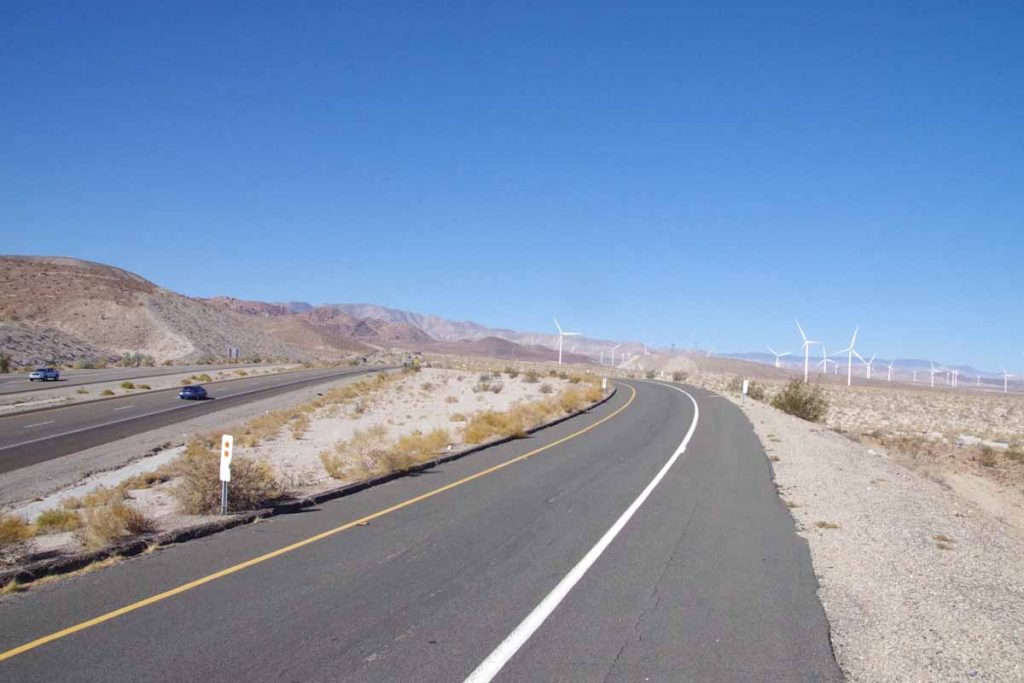 I cycled the remaining distance to Ocotillo. The bad road was done, and shortly the climbing and interstate riding would start. 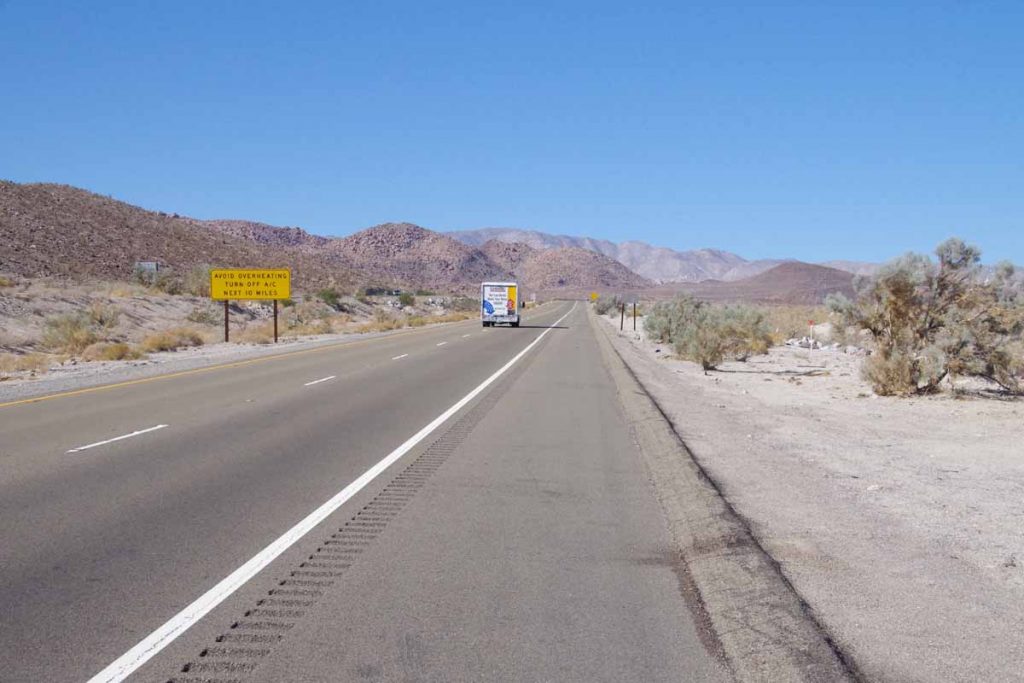 There were signs suggesting motorists turn off the air conditioning for next 10 miles of climbing to keep engines from overheating.

The temperature was just over 30C (86F) and no air conditioning for me. 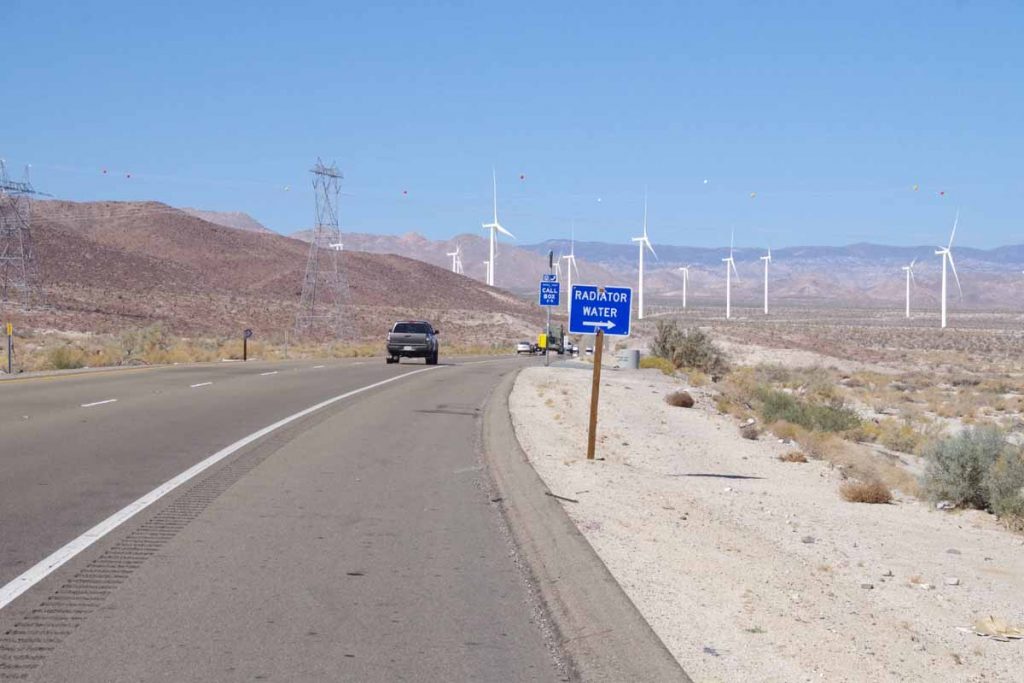 The next 10 miles contained 19 of these radiator stops where one could get water. I stopped at almost all of them. While I couldn’t drink the water, I could pour it over my neck and shirt and use it to stay cool. It was also a nice excuse for short break from climbing. I had gotten this idea from reports I read the previous evening. 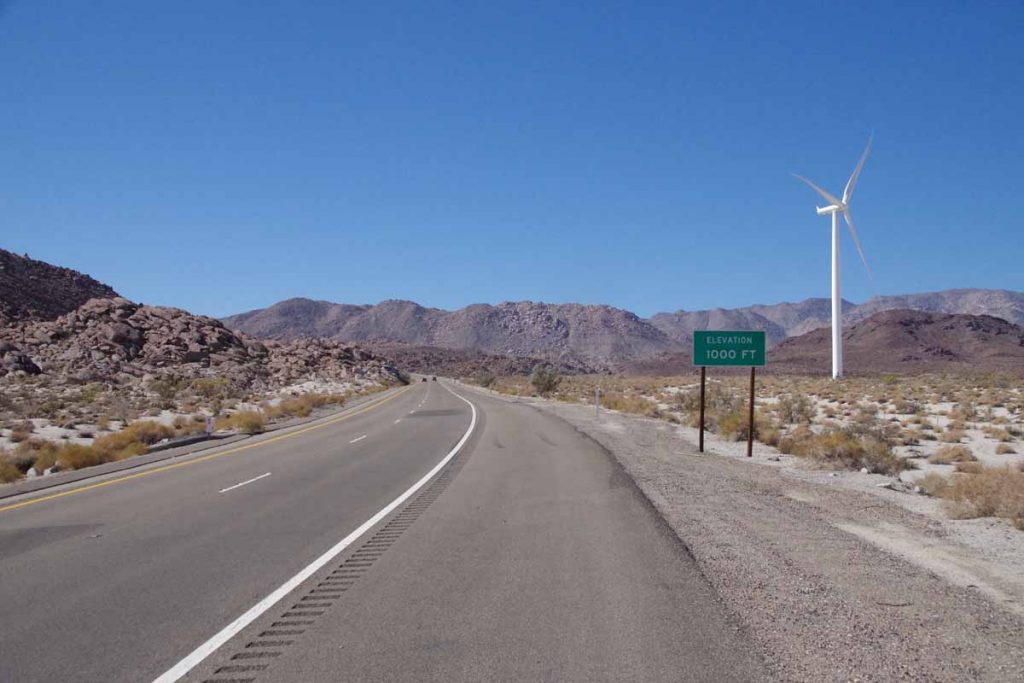 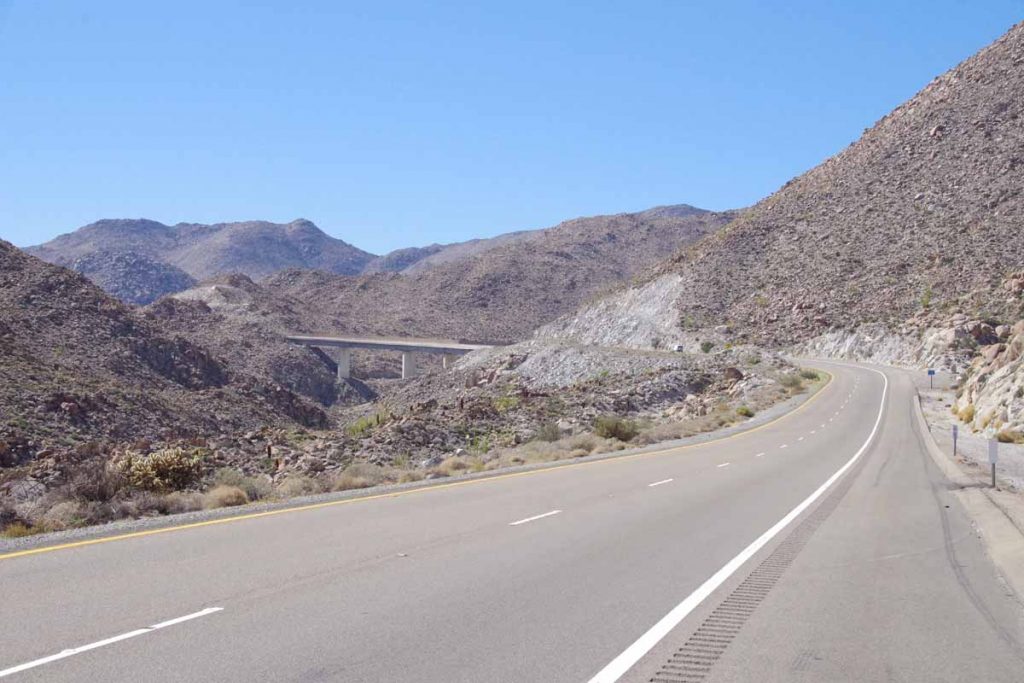 This was the second of two bridges. The shoulder was ~30cm wide (one foot) so it was narrow. On the first bridge the traffic all moved over on the second it passed a bit closer but nothing too scary. 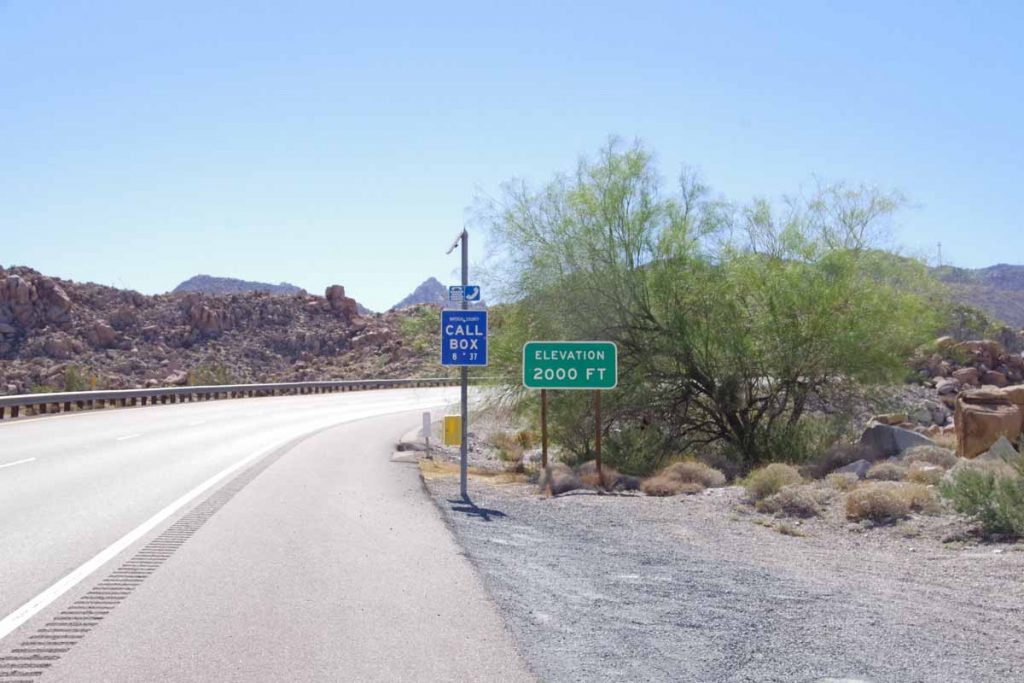 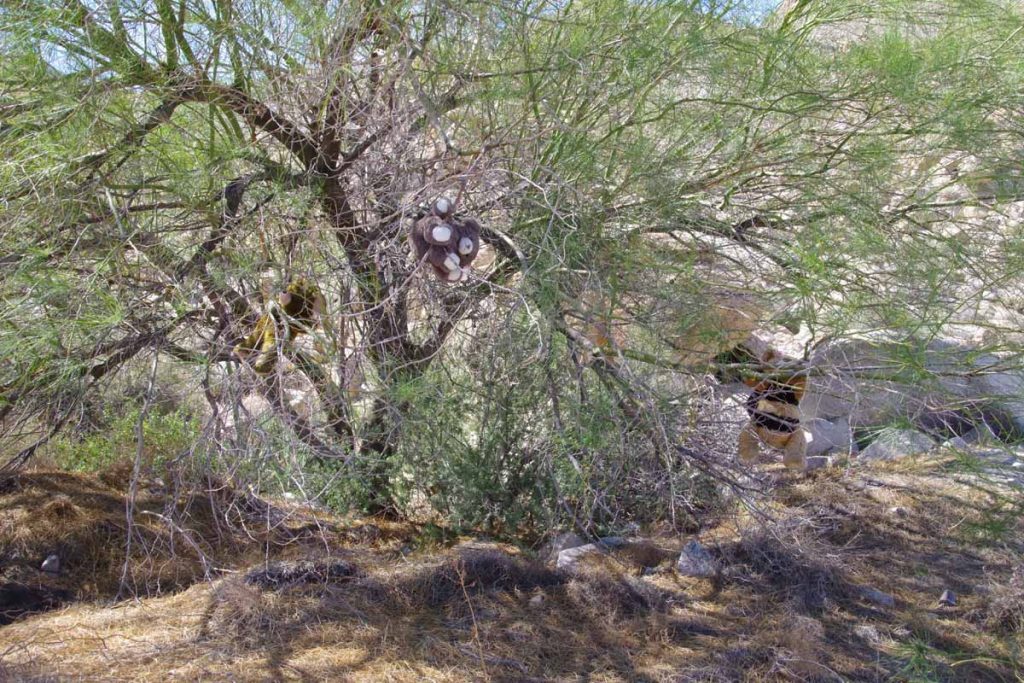 Here was a tree with three teddy bears suspended. 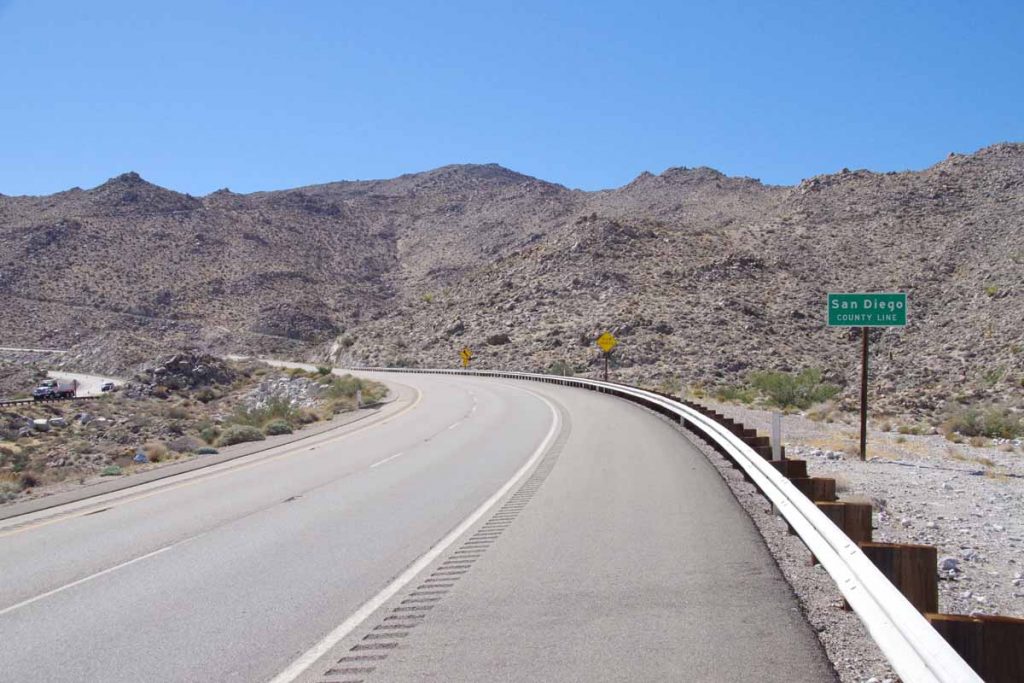 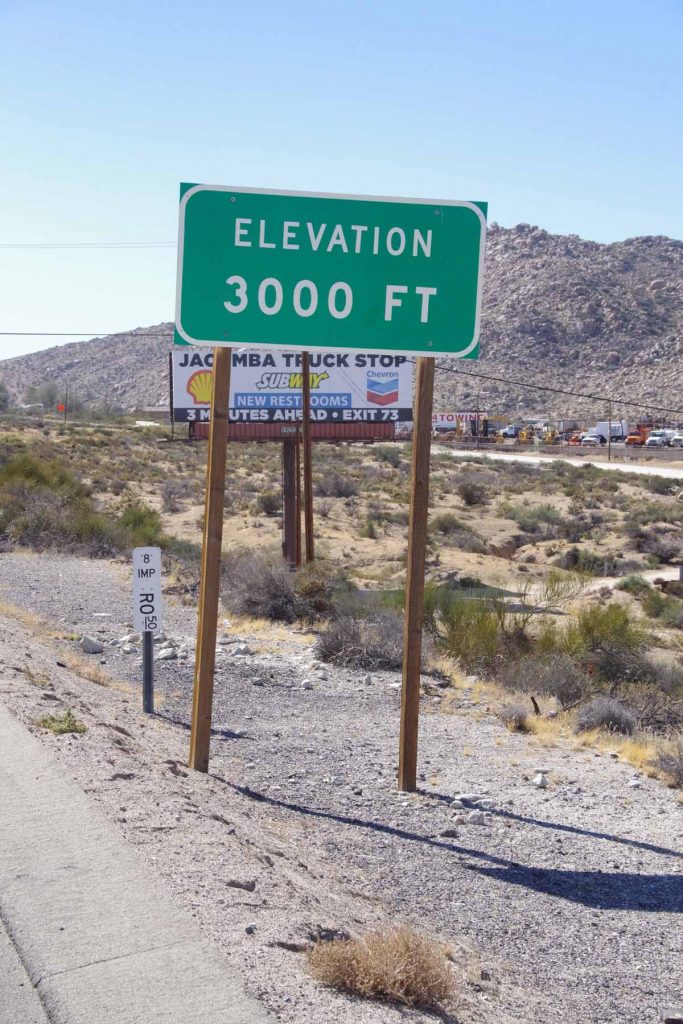 I passed the 3000ft level and shortly thereafter, left the interstate behind. Overall, these 10 miles had a substantial climb, but stopping and soaking with water helped. Despite being later in the day, it was cooler at the top than the bottom. 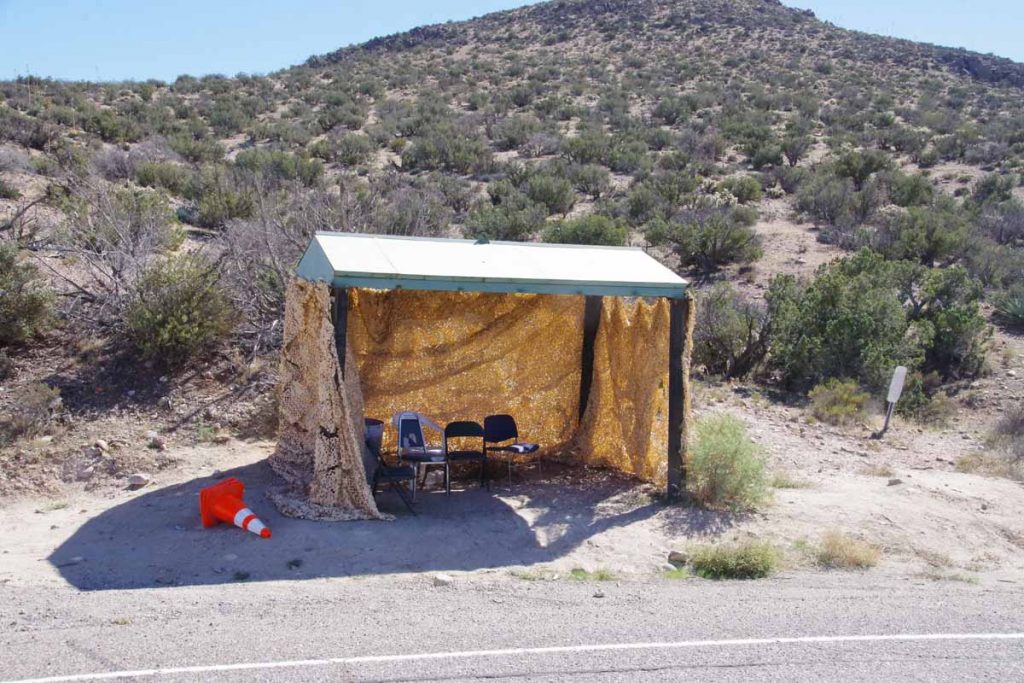 From here I followed “old 80” the last six miles to Jacumba Hot Springs. There was still 200ft of climbing and after that mostly descent. I also got quite close to the US/Mexico border. I saw many border patrol vehicles and believe this tent was also likely associated. 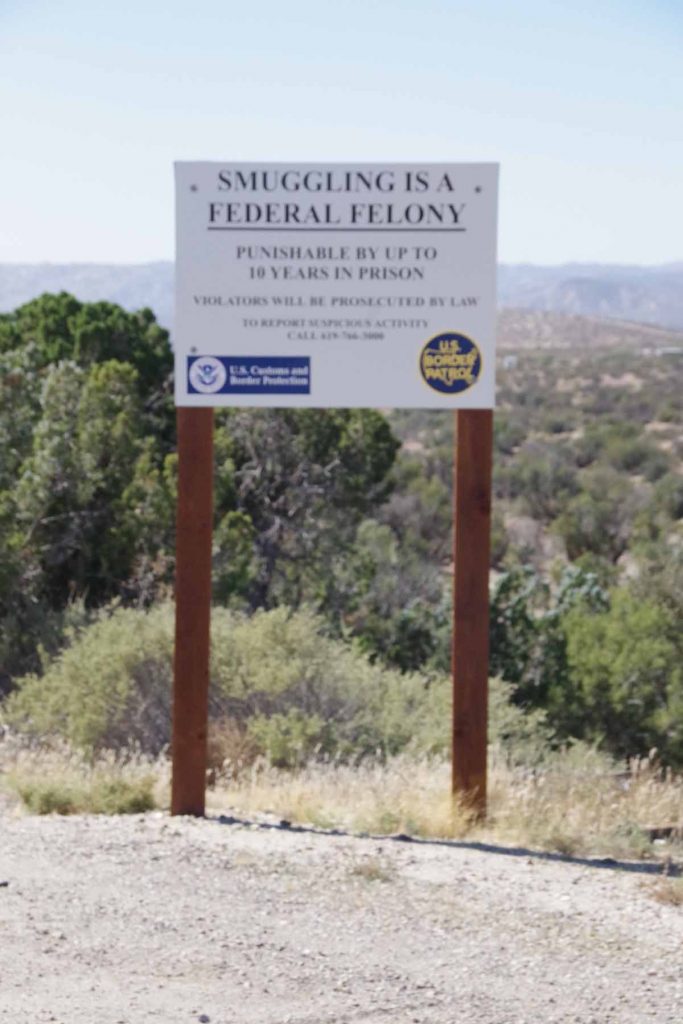 There were warnings about smuggling. 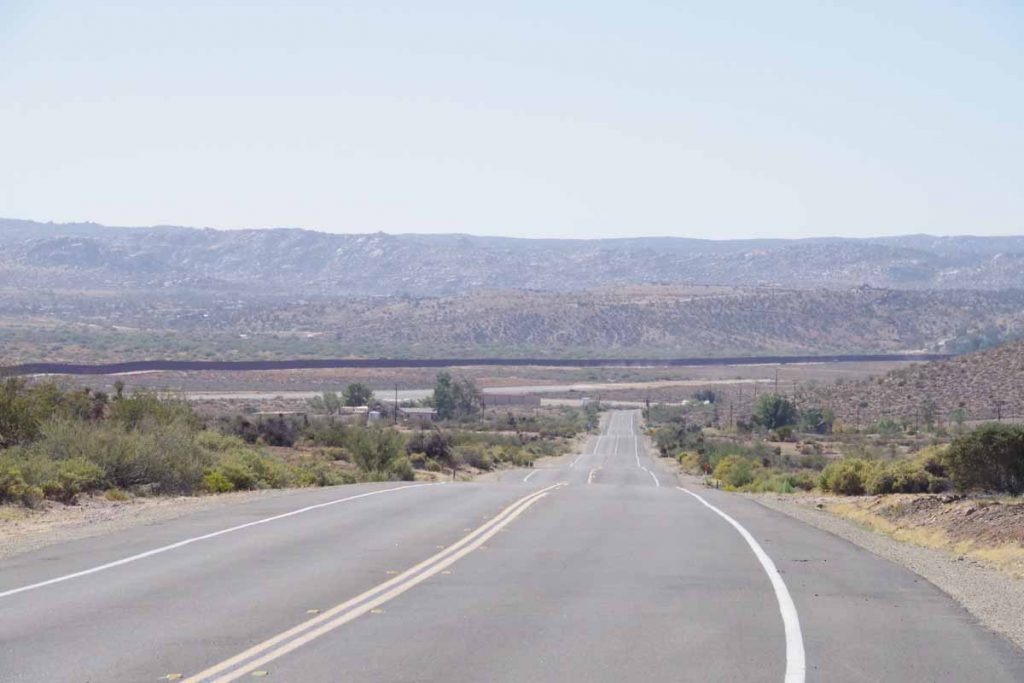 While not quite to Mexico, you can see it from here. The big line in the middle is a border fence and Jacumba Hot Springs is off just slightly to the right. I got there around 2pm, which was earlier than I had anticipated.

So is it better to know the road ahead? Today the advance reading set my expectations for a potentially much tougher day. The weather cooperated by not going much over 30C and not having to fight tough headwinds. The road was rough but not as bad as described. The climb was long but soaking with water multiple times kept cool. So I think still slightly better to know, but also need to be careful to not get too concerned on some of what I’ve read.