Four days of riding through desierto central has brought me to Guerrero Negro. It was remote, but not as isolated as I expected with many small places along the way and some good spots to camp. The road was narrow but overall in good condition and not much traffic. 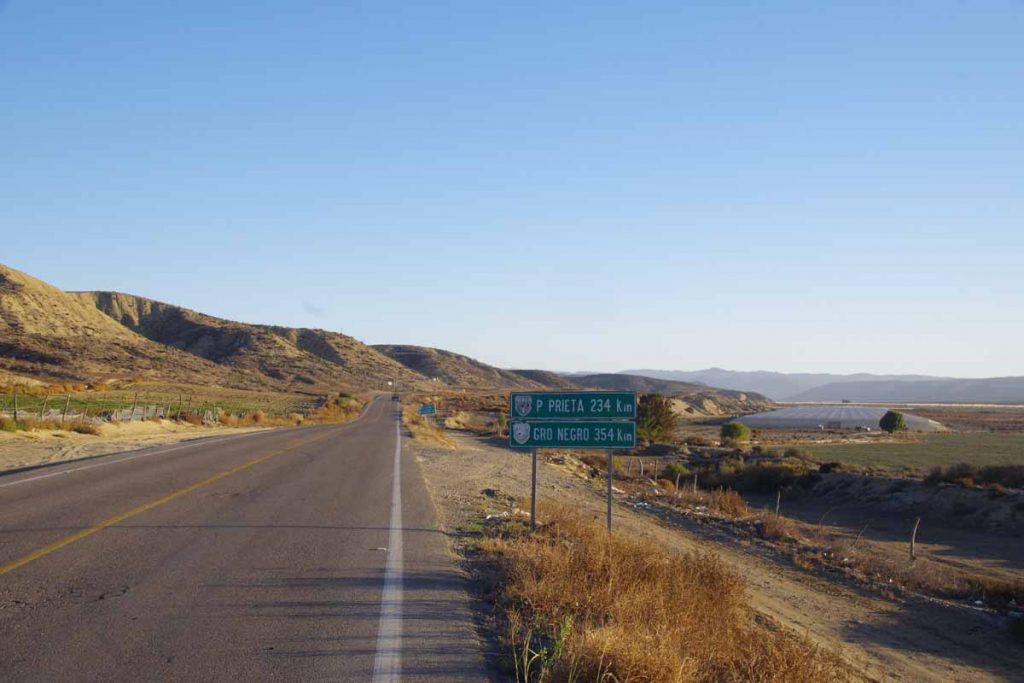 Day One
A climb from El Rosario and into the desert. Overall, I climbed a net of 600m and my odometer gave a total of 1300m. Most of that initial climbing was in the first 35km and then rolling hills after that. 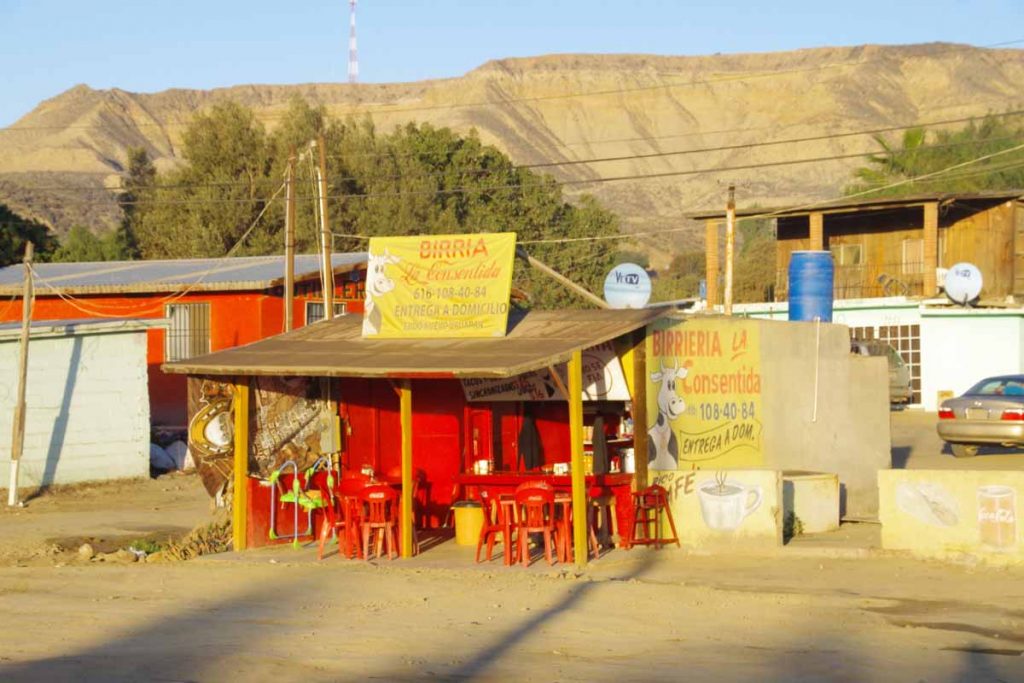 Left at sunrise when El Rosario was mostly asleep on a Sunday morning. A few places like the birria above was starting to stir. 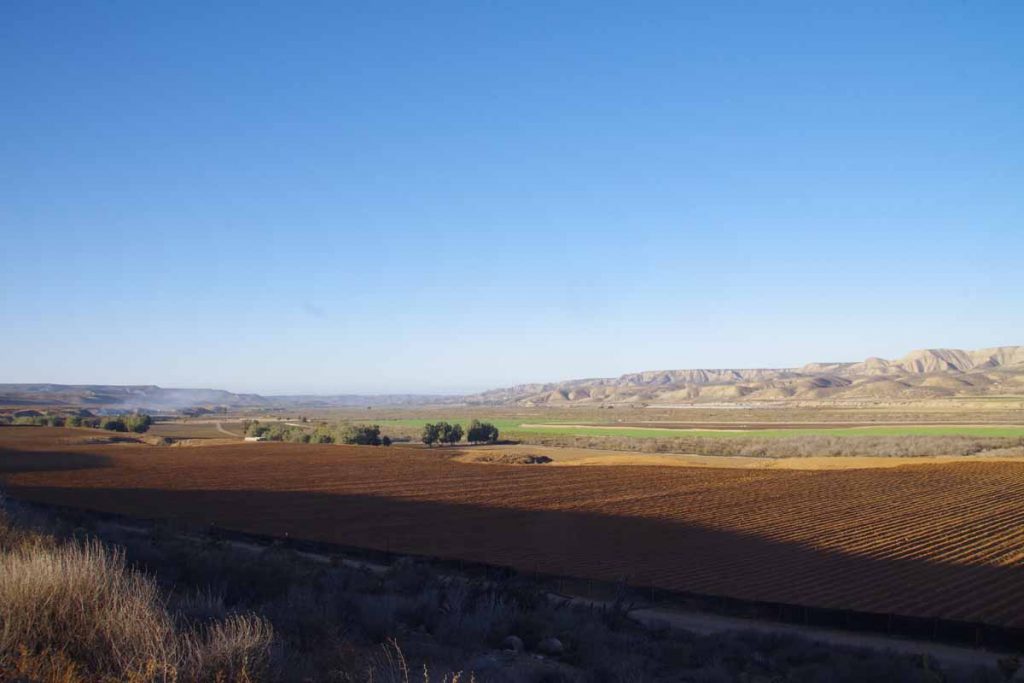 The first 8km followed the valley and were mostly flat. Above is one last photo looking at this agricultural valley after I crossed a bridge and before starting the climb. After this point there were multiple spots where one would fairly steeply climb 100m and then level off or roll a bit before encountering the next climb. Fortunately, it didn’t get much over 20C (68F) since this climb would be tougher in summer heat without shade. 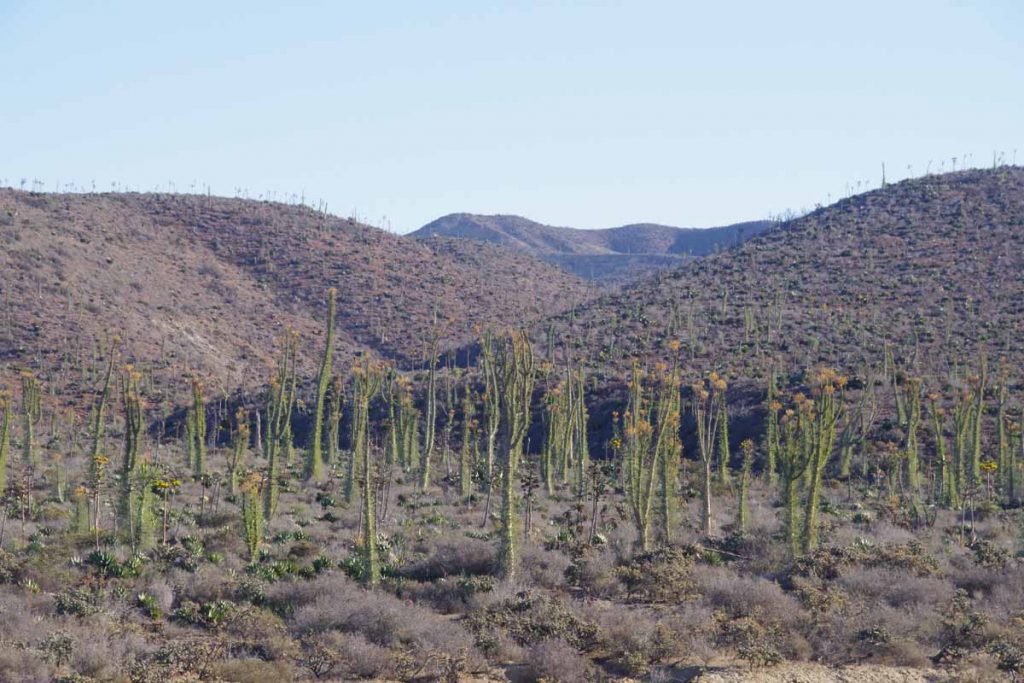 After ~15km I started seeing some of these giant cirios cacti. The photo doesn’t give a full account of the scale but they are ~10-15m tall (33-48ft) and dwarf those shrub bushes beside them. I kept climbing to reach local summit near 35km. Phew! 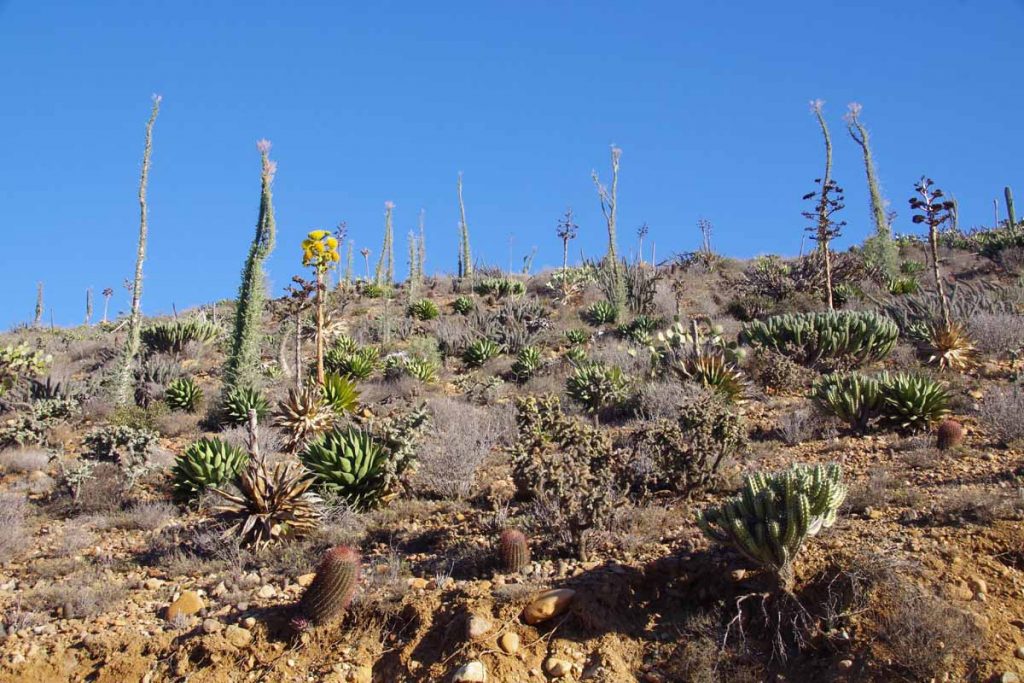 Along the way, continued to see a nice array of cacti, particularly in the more sheltered areas. 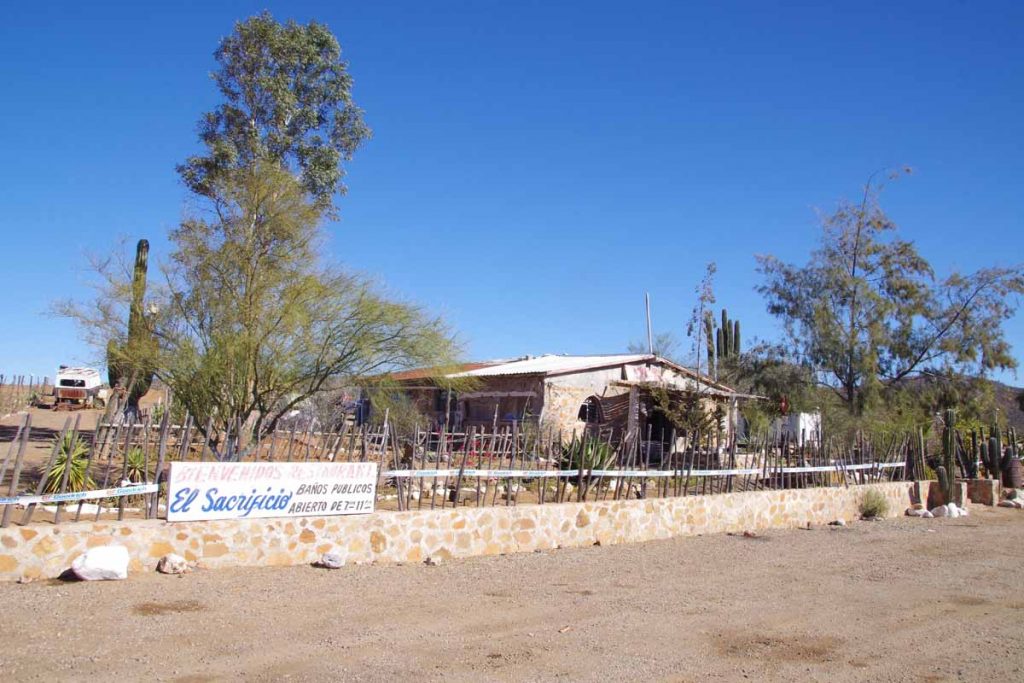 At 46km was the first “loncheria” or place to refill on water and perhaps get a snack. Mostly at the first one I was happy to have an excuse to get off the bike, sit and take a short rest. There was another one at 51km, but no need to stop again. A third one at 63km was deserted and closed. 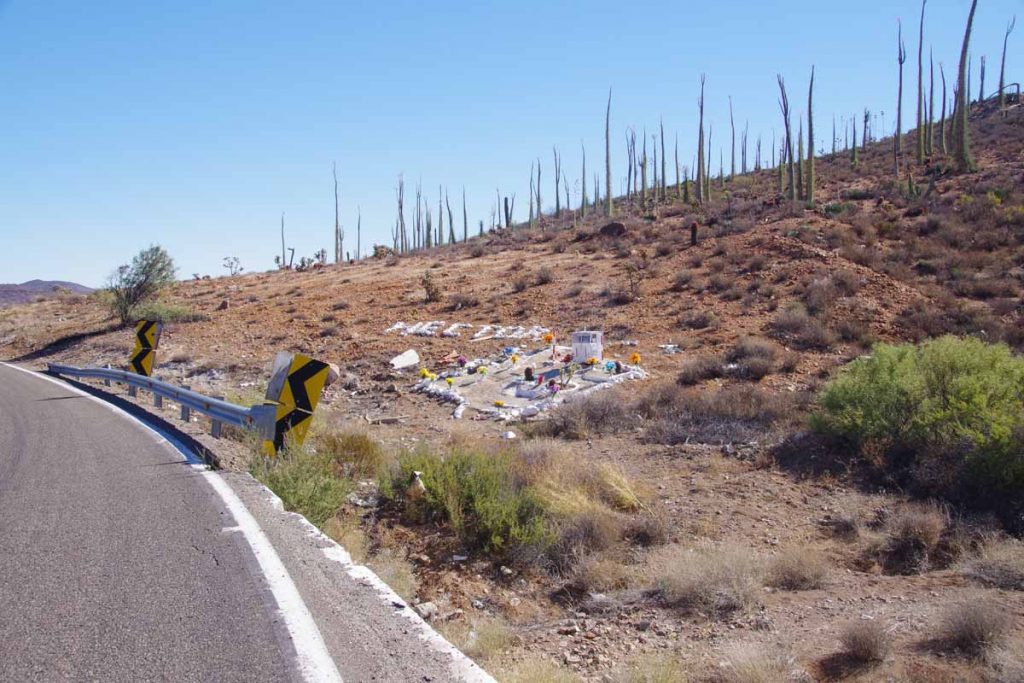 Not far from here was a photo I named “Hector missed the turn”. All the signs were present: (a) a curvy road (b) a missing guardrail (c) debris below and (d) an elaborate memorial with Hector’s name in painted rocks. 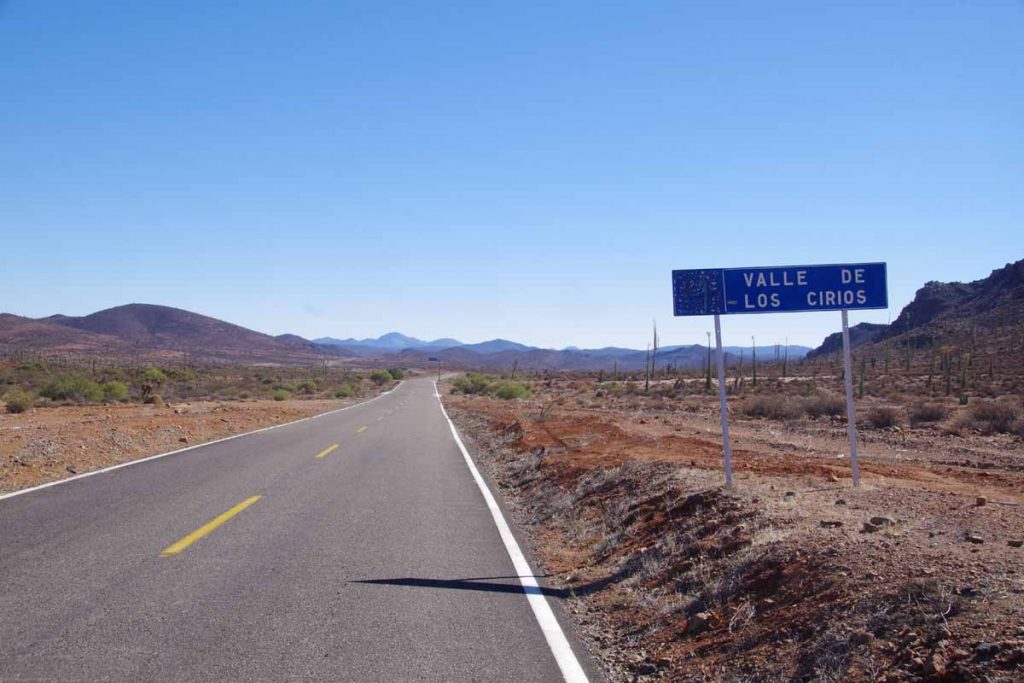 As I got higher, I got to a more open area and slowed as started going into more of a headwind. Just about the right time a loncheria appeared. I stopped and had two burritos. Not sure what to expect, but these are small snack burritos with a rolled tortilla and a little filling. Also here I crossed the 30 degree parallel and more formally came across “Valle Los Cirios” natural preserve area. 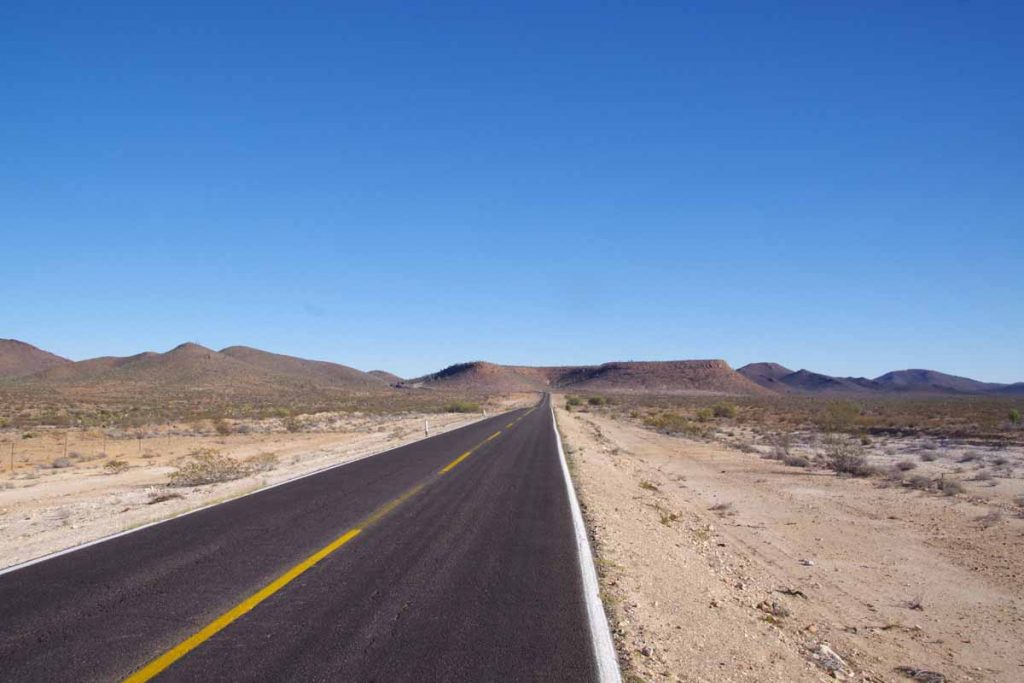 Another photo of the long open areas. 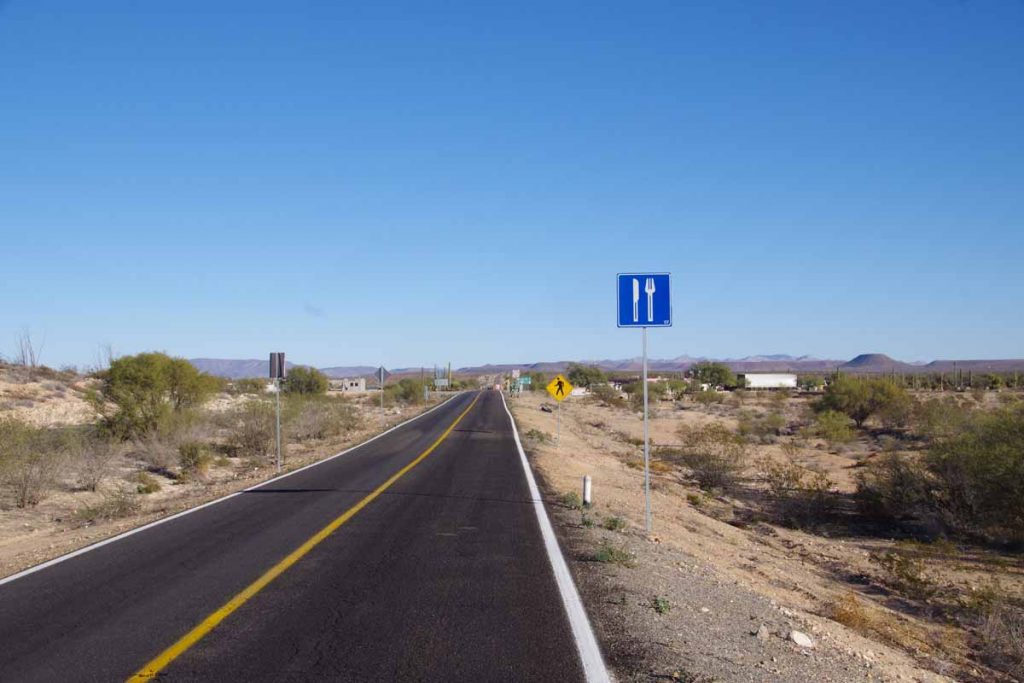 Fortunately at 87km, my end destination appeared: San Agustin. There was a small café here (more little burritos) and a military checkpoint. The café also advertised RV Park. I was only one there and it was a quiet night.

Day Two
My thermarest sprung a leak last night. It was flat at midnight and again at 2am. I have a patch kit but I’ll need to find the hole first. Other than that, today was generally an easier ride with fewer hills to climb and only about half the total elevation. 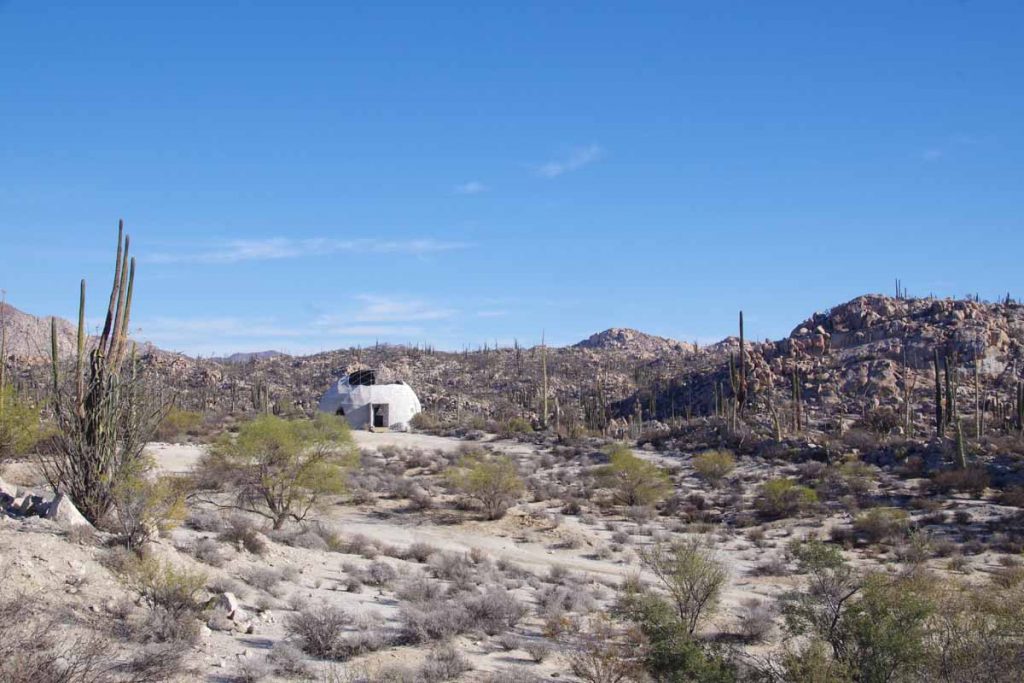 It was a pretty morning and I cooked some soup on the stove in early morning just before sunrise. There was a gentle climb for the first 15km and then as I crested the hill I saw more rocks mixed together with cacti. Photo above wasn’t far from Catavina a small settlement I reached just past 9am. There was also a small store here and three motels. While it was tempting to stay, the timing wasn’t right so after a stop at the store, I was on the way again. 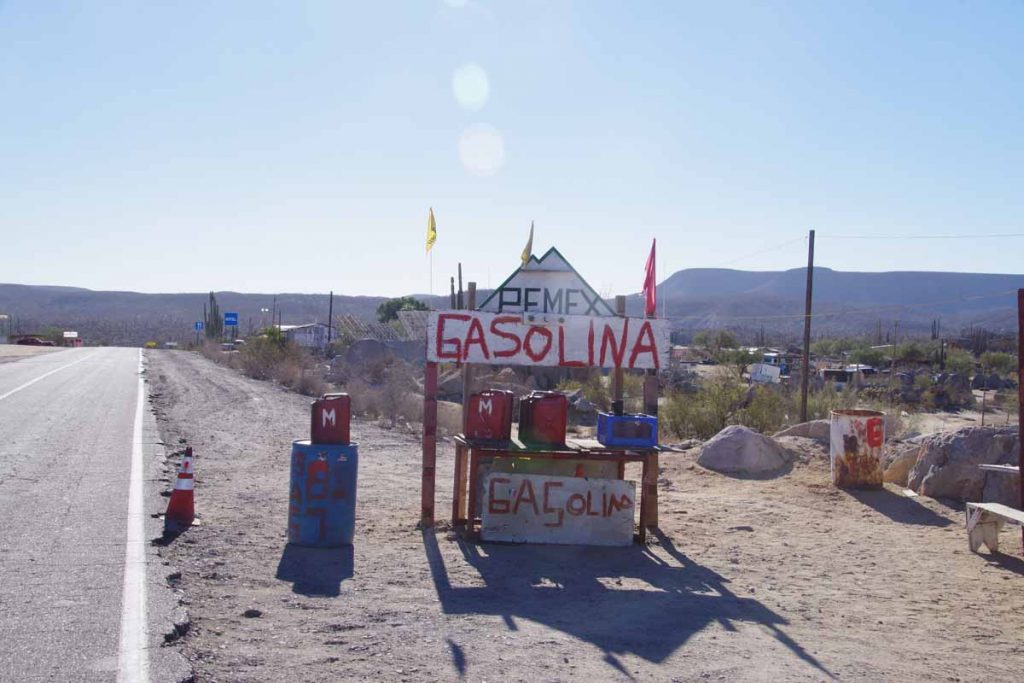 While not a formal gas station, these guys are willing to sell you some gas if you are running short. 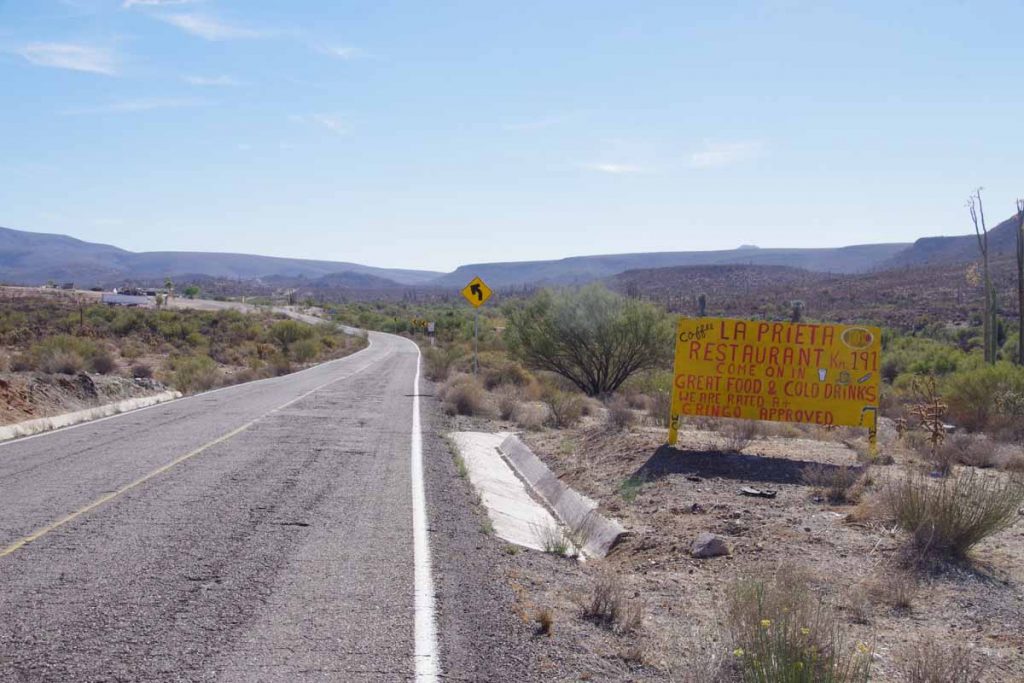 At 46km this sign beaconed as an excuse to a breakfast stop. 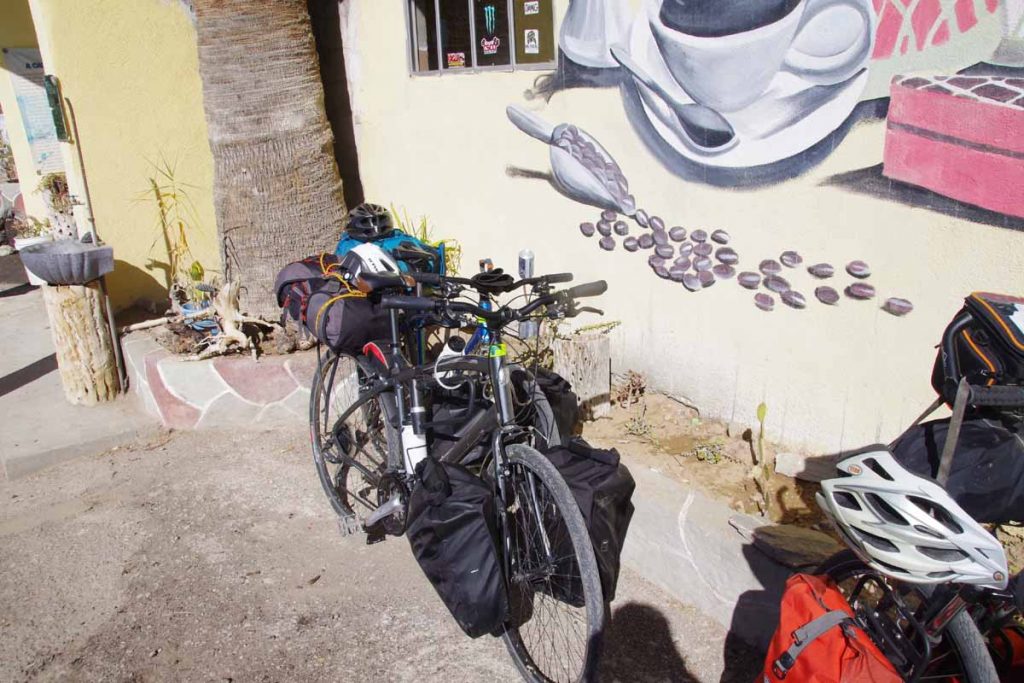 Two bikes outside and I met a couple from France who were also cycling Baja. They were going to try for similar destination today (Chapala), though I didn’t see them later (apparently they likely stayed 500m before the loncheria as I heard later). 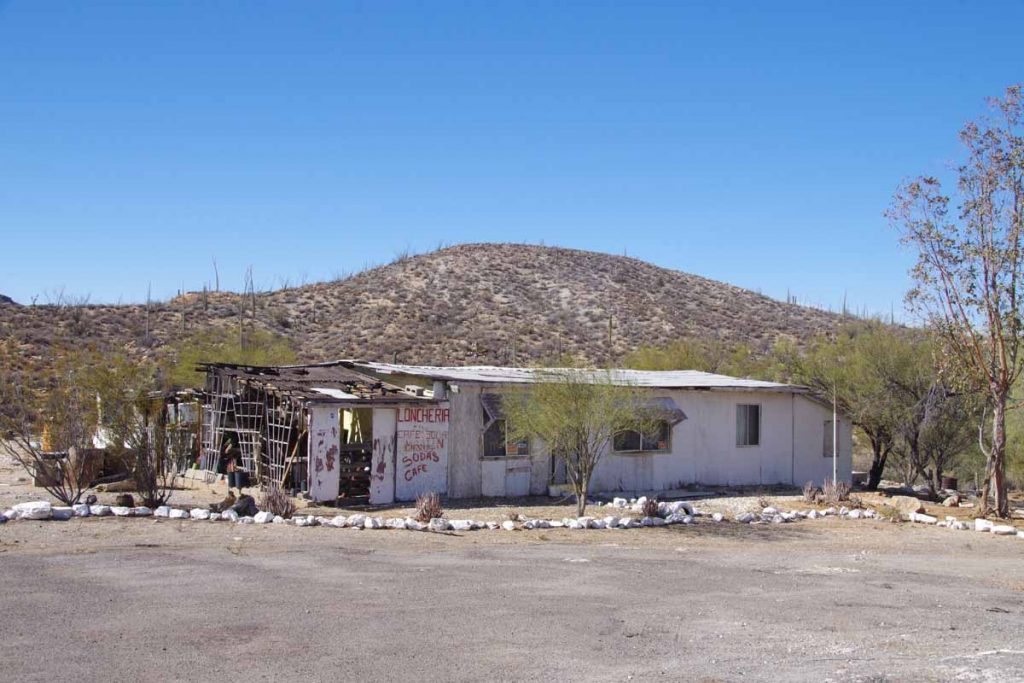 After an omlet brunch, the road continued a more substantial climb. It also passed another closed loncheria. Reached a local high point. 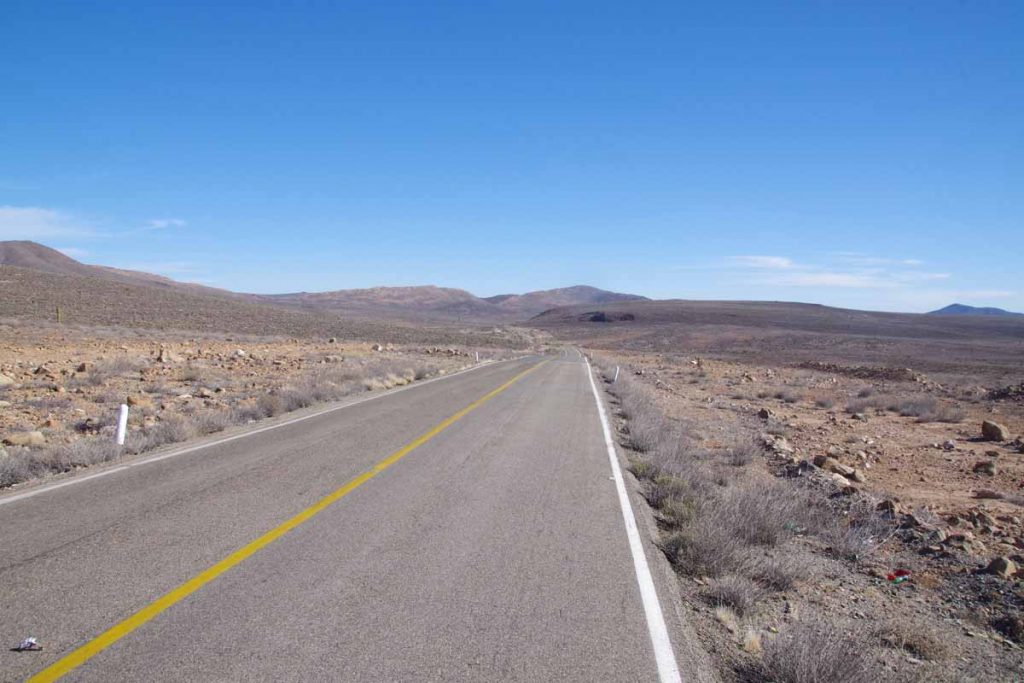 After this the views were more open and also fewer plants. Without too much difficulty, I reached Rancho Chapala at 3pm and so had more than an hour before sunset. Had dinner in the café (more little burritos and later a quesadias). They let me camp behind the loncheria and fortunately a place sheltered from the wind. At night a generator was used to power the lights and when this stopped around 9:30pm, became very quiet and with beautiful view of stars and milky way.

Day Three
The wind continued throughout the night. My tent was sheltered but I could hear it creaking in the trees. Started to become concerned if might be enough wind to make cycling difficult. However, decided I’d start out and worst-came-to-worst, could always turn back. 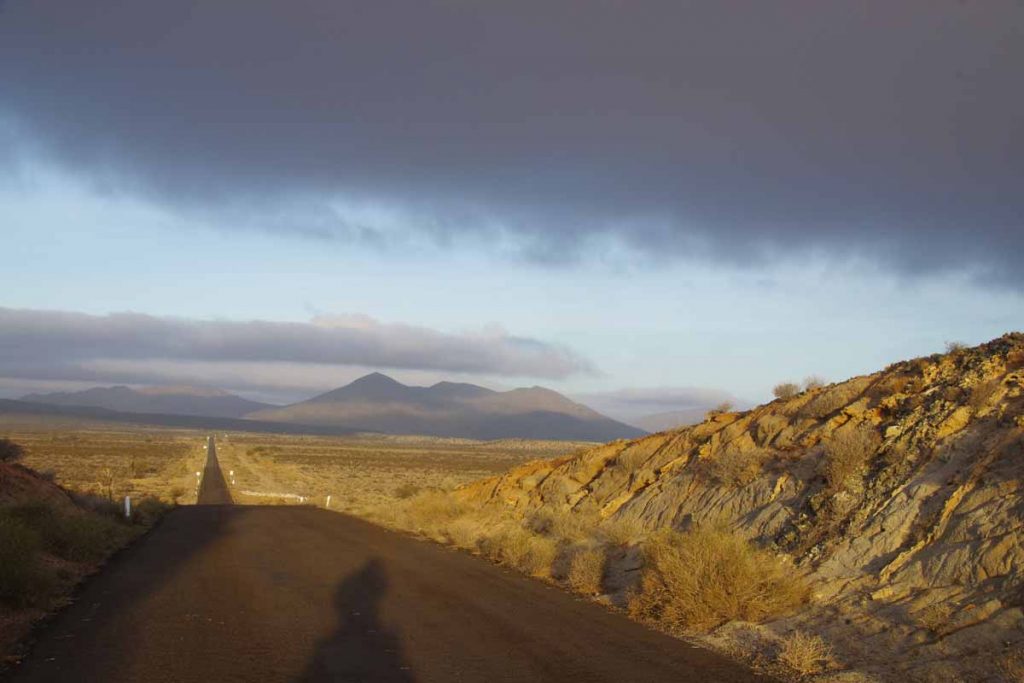 Compared to what I feared, the wind was much better today. Above is a photo from 4km looking back towards Rancho Chapala. I believe this is a bit of an open bowl valley and so might be normally a more windy spot. Not to say there wasn’t some wind today but not as bad as expected. 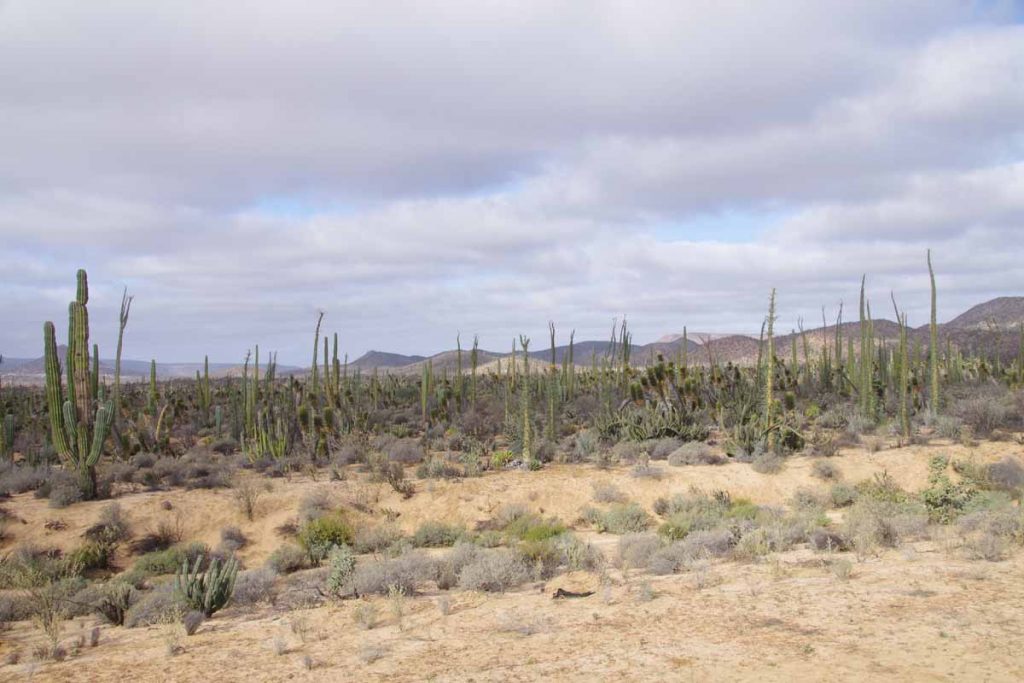 The first 48km was through open country with some areas with nice cacti and also some long stretches to ride. I had camped at ~700m and overall there was a gradual descent through the morning to ~200m so that helped keep speeds up. The winds were mostly cross winds. 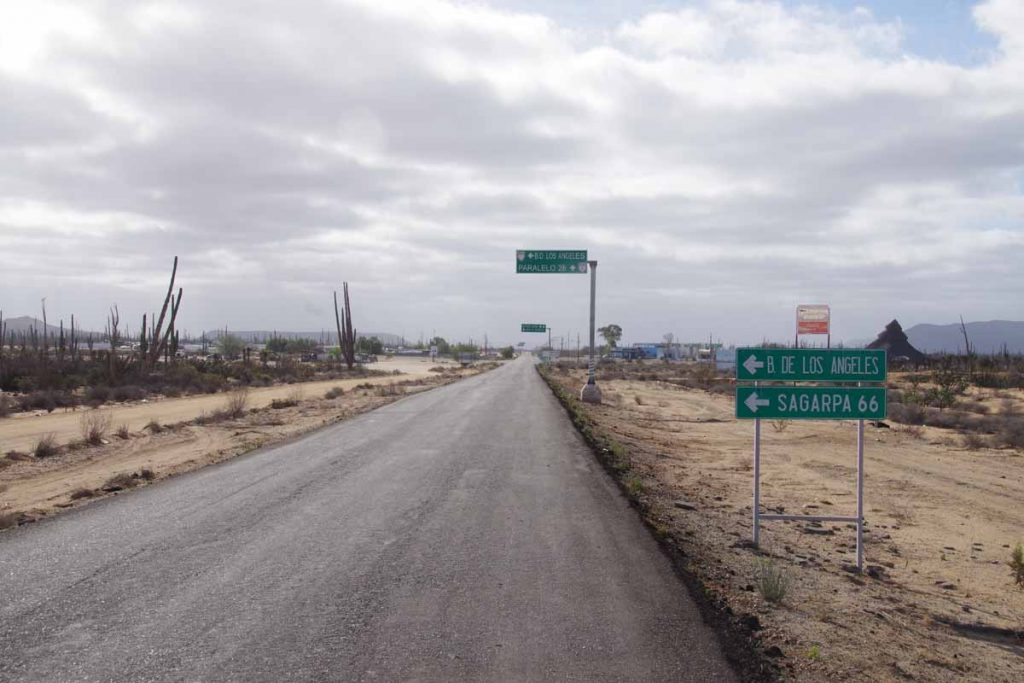 At 48km I came to what looked like it could be a big intersection of road to Bahai Los Angeles. There wasn’t much here, other than a junk yard, a police building, a small store and loncheria (didn’t bother to check if it was open). The road surface became slightly better here, though still narrow. Not that there was much more traffic. 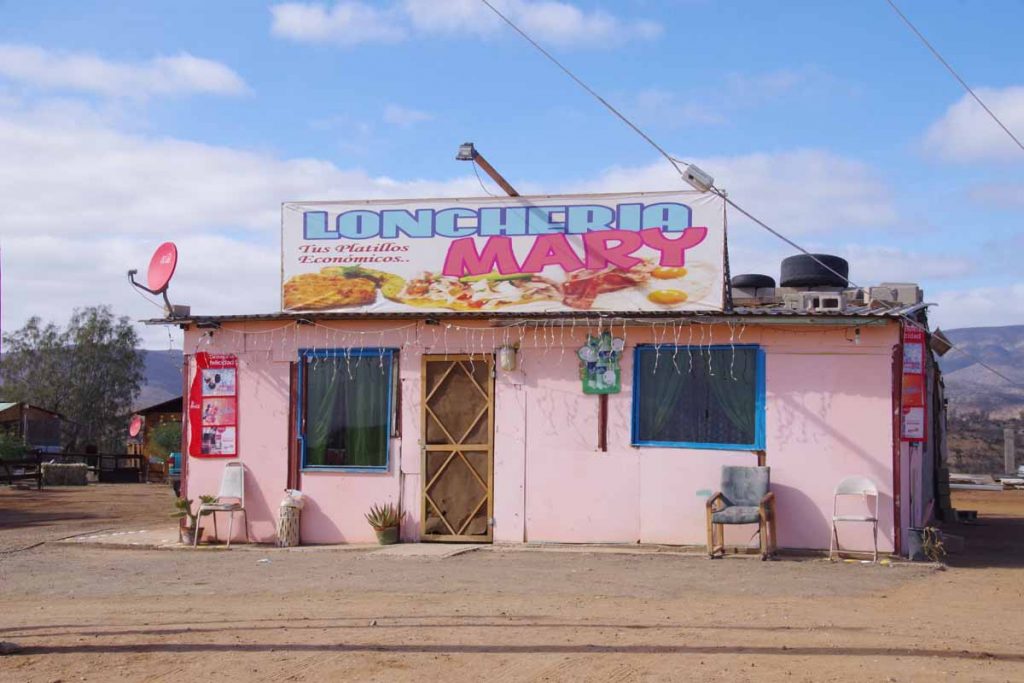 At 62km was Loncheria Mary. Great place to stop for food. I ordered breakfast omlet but it also came with beans and tortillas. They said they had wifi, but couldn’t connect. 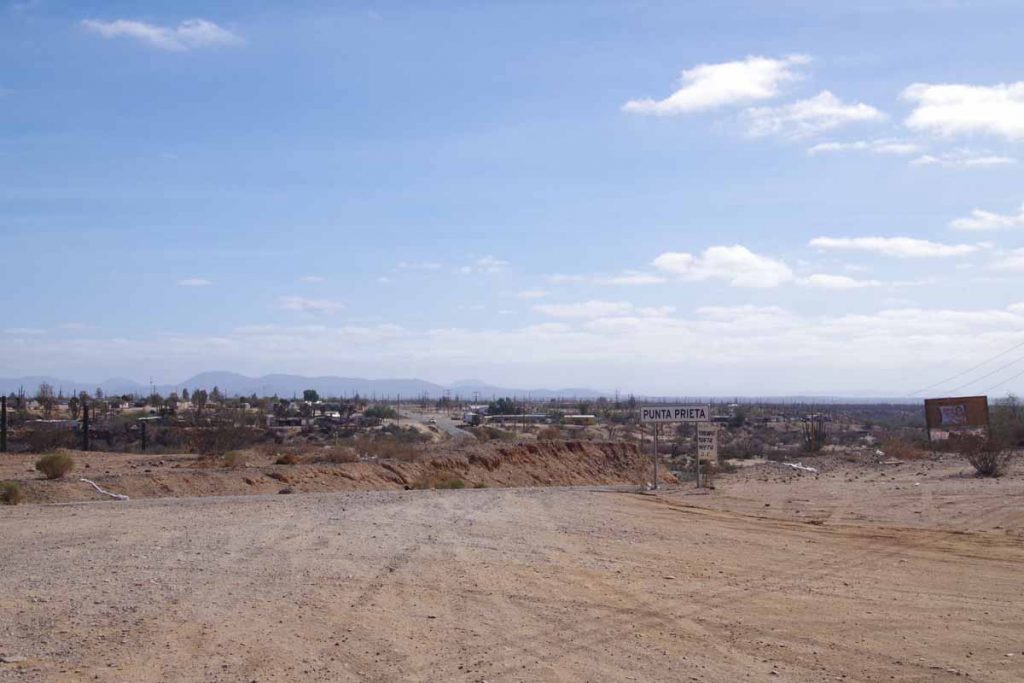 Town of Punta Prieta itself was across a small “vado” and before I knew it I had passed. Still a few more hills to climb. 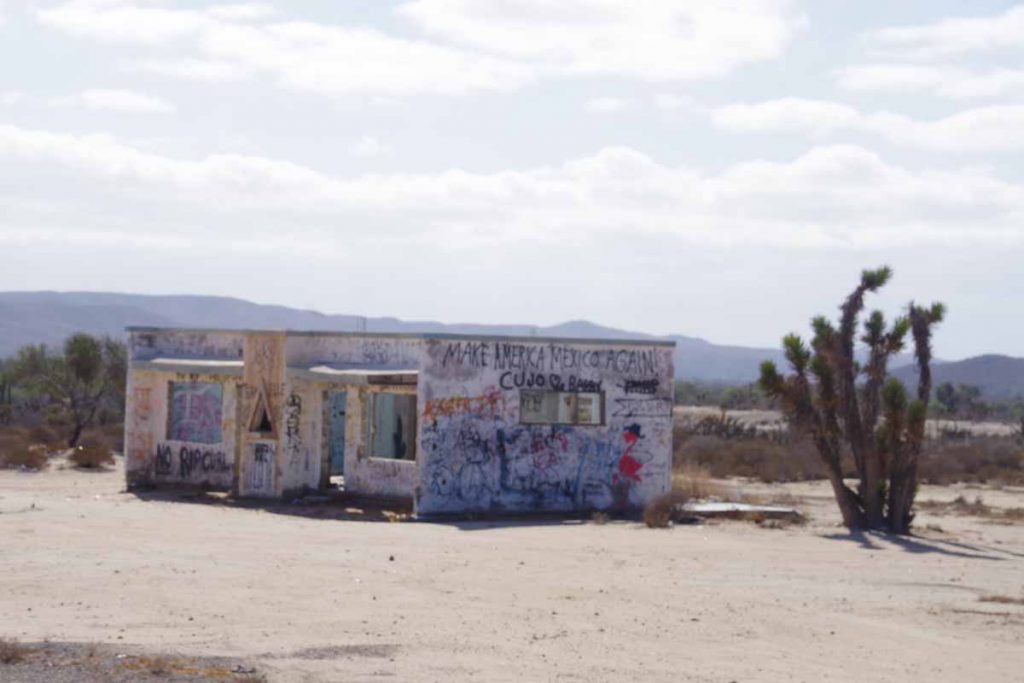 I assume the graffiti was in response to recent US election.

Kept up good progress to reach Rosarito. Like Punta Prieta this was small town and not just loncheria. Stopped in the small hotel here and had lunch at restaurant next door. Even had a hot shower. 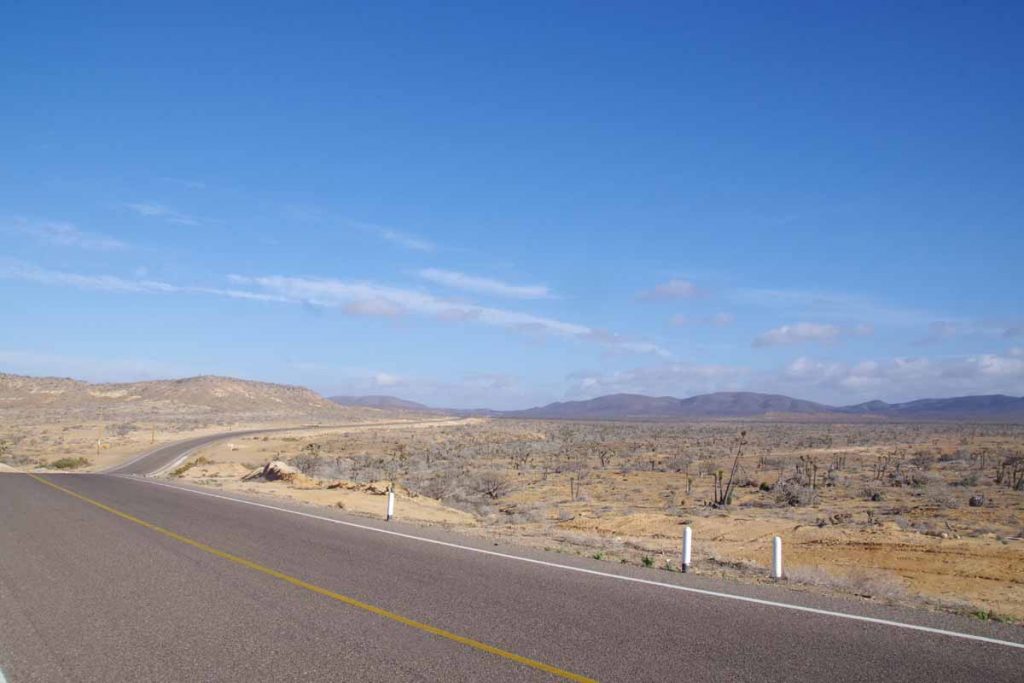 Hill above is perhaps one of the largest and it was particularly flat at the end. I had a tailwind in this section so easy riding overall. I expected it to be easy so slept in a bit. The first point of civilization wasn’t until Valle Jesus Maria at 42km. This was part with a few very gently rolling hills and also a military checkpoint. 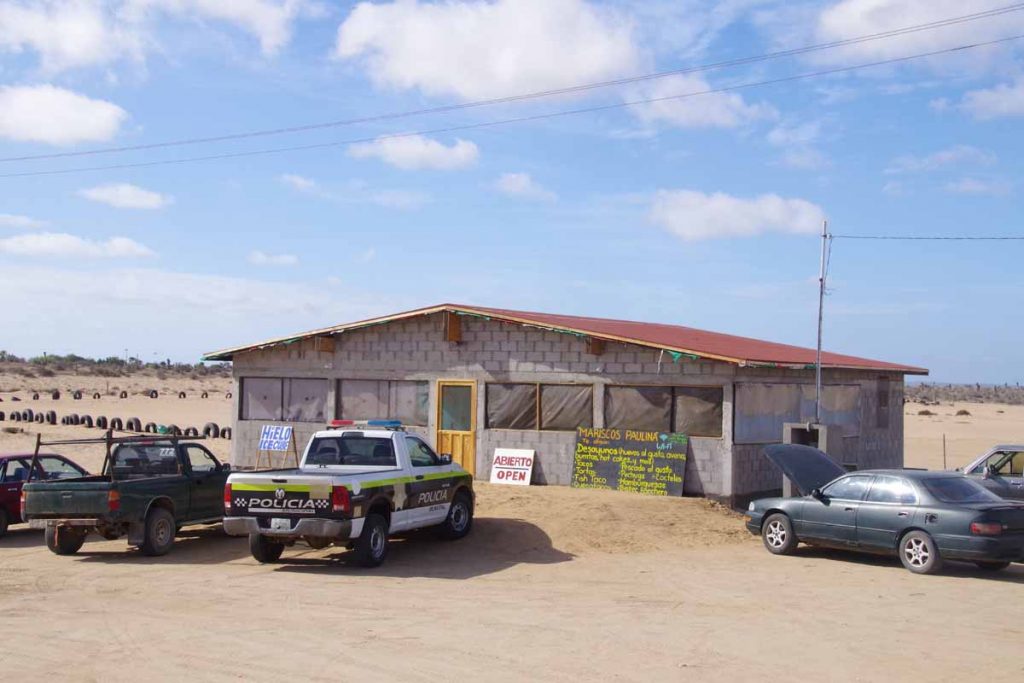 Valle Jesus Maria had a number of small places including this restaurant where I had a breakfast and first working internet since I left El Rosario. Overall a nice little place. 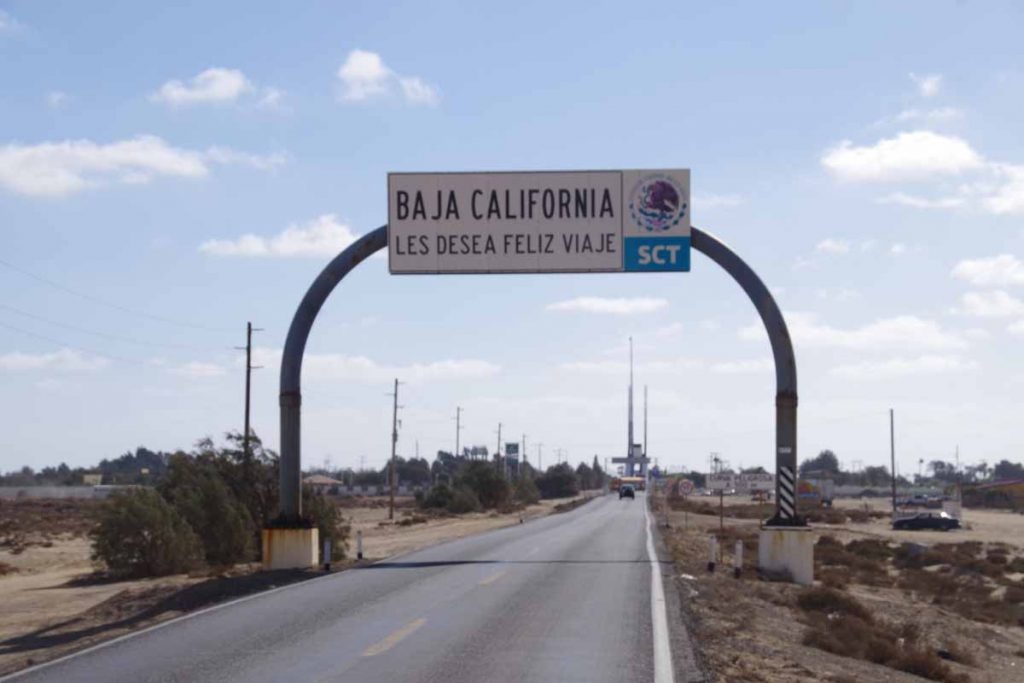 Another 30km of flat straight cycling through barren countryside. Two US cyclists passed me and shortly thereafter I came to Guerrero Negro. The 28th parallel of latitude is a state boundary and so first the goodbye arch from Baja California (Norte) state. 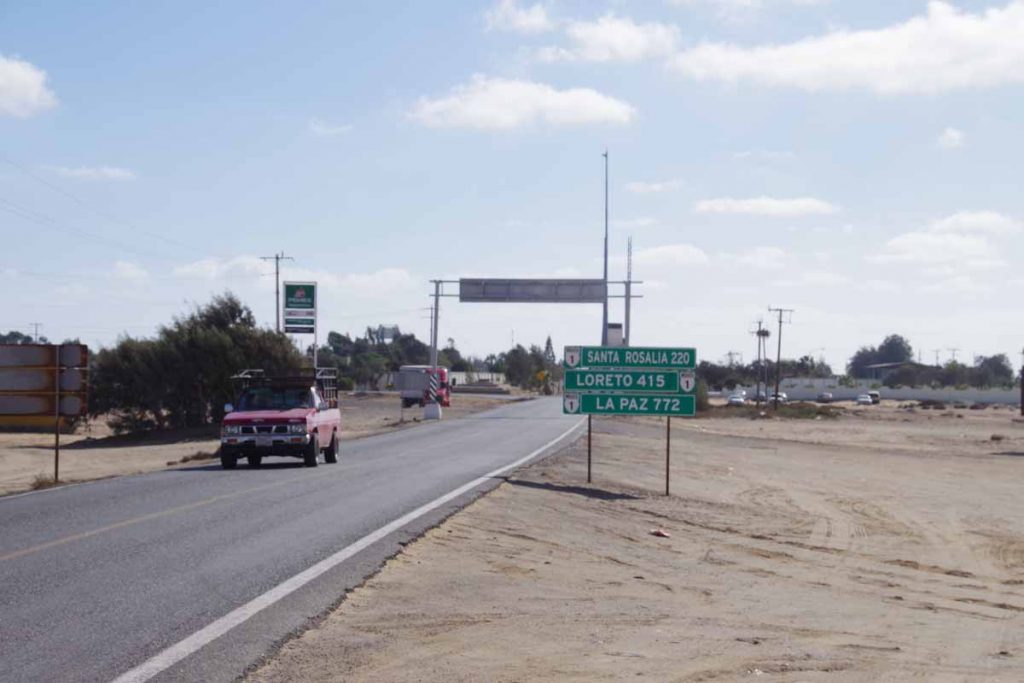 My GPS skipped ahead an hour to Mountain Standard Time and there were now signs for distances remaining in Baja California Sur. 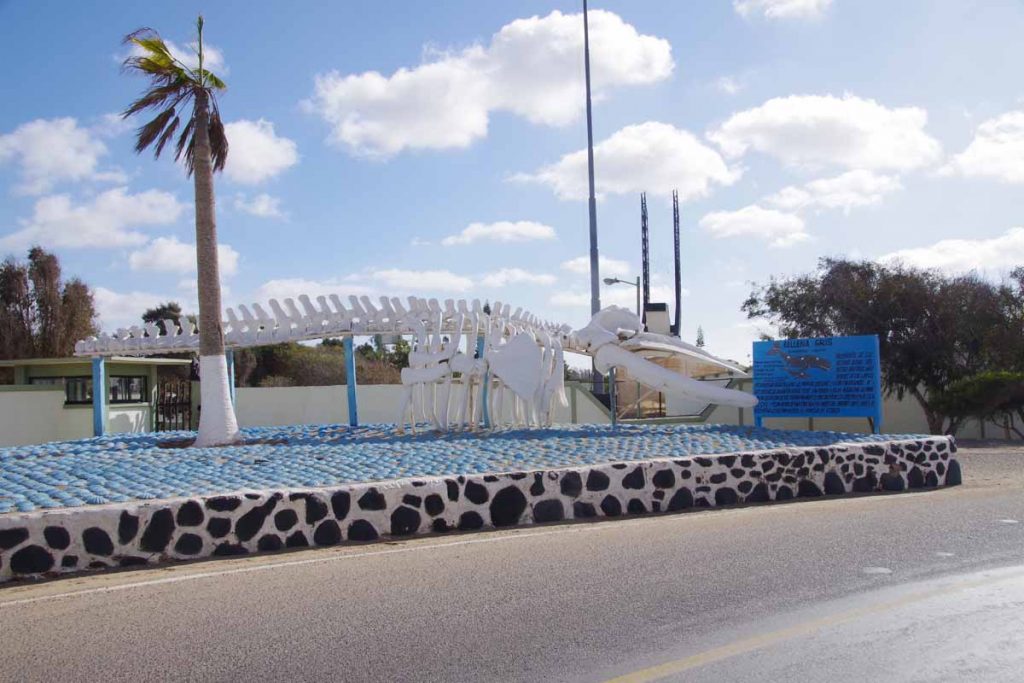 There was a military zone and then this gray whale skeleton and then I was at the town. Found a place to stay and now will sort out the next section of the route.