Two days of cycling in Michoacan have brought me to the capital, Morelia. Overall I’ve found Michoacan to be quieter than states before, both in the smaller villages and even in this capital city of 600,000+ people. However, some nice riding with colder mornings and beautiful sunshine.
Day One
A cold start today and a number of slow climbs, but otherwise a pretty ride. 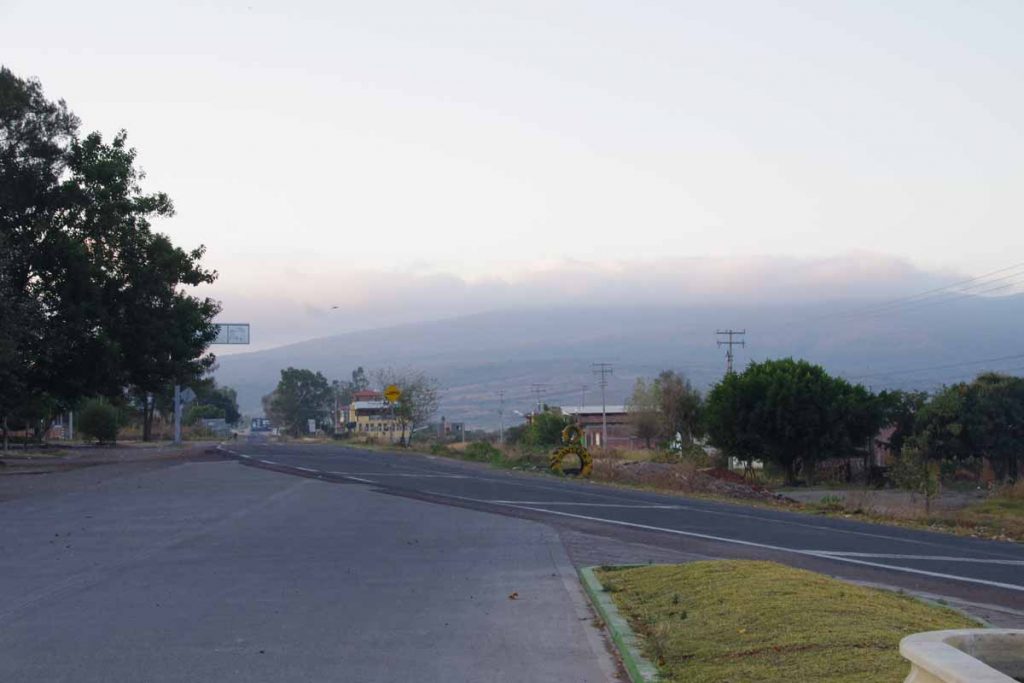 Churintzio was quiet as I left. 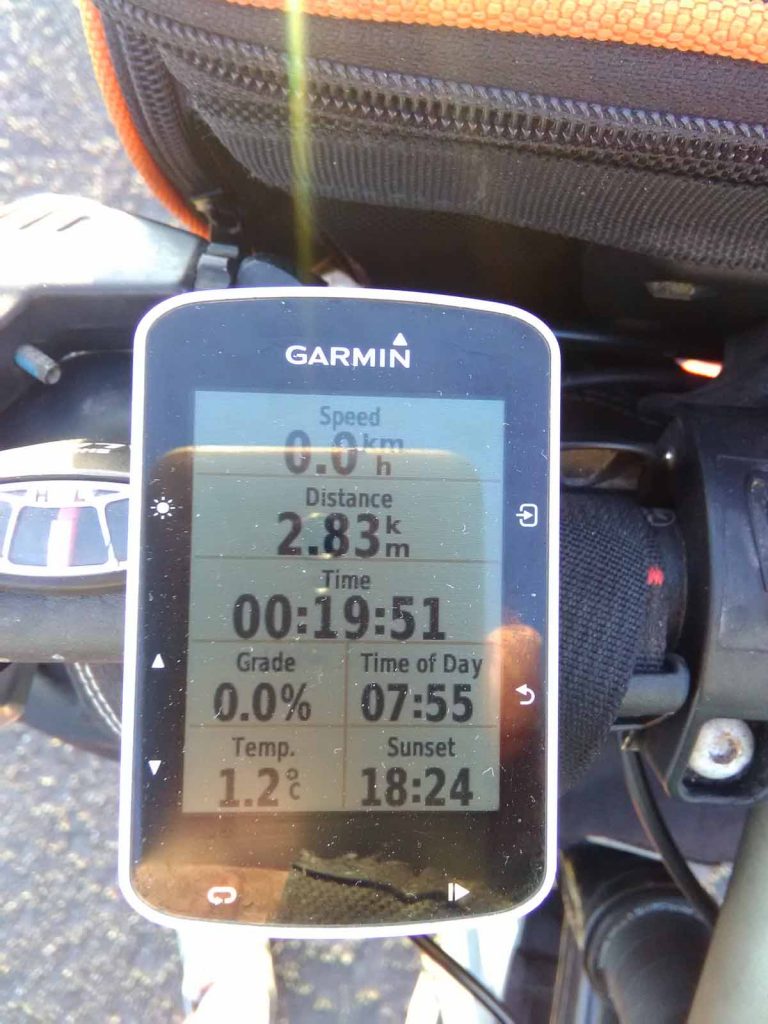 My cycle computer told me 1.6C when I entered the cuota and then dropped to 1.2C (34F) a short while later. 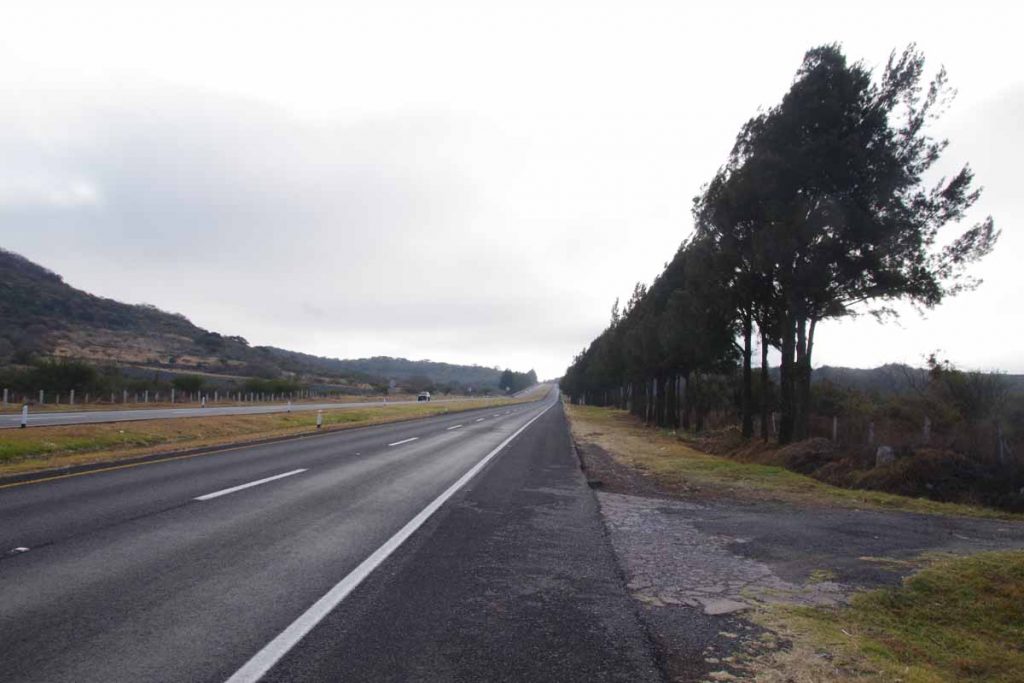 However, what made it particularly cold was a sharp north cross wind that I had for first two hours. Just as it would warm a degree or two, I would go around a bend and then it would drop again. However, by 10am it finally started warming up and the wind even died down. 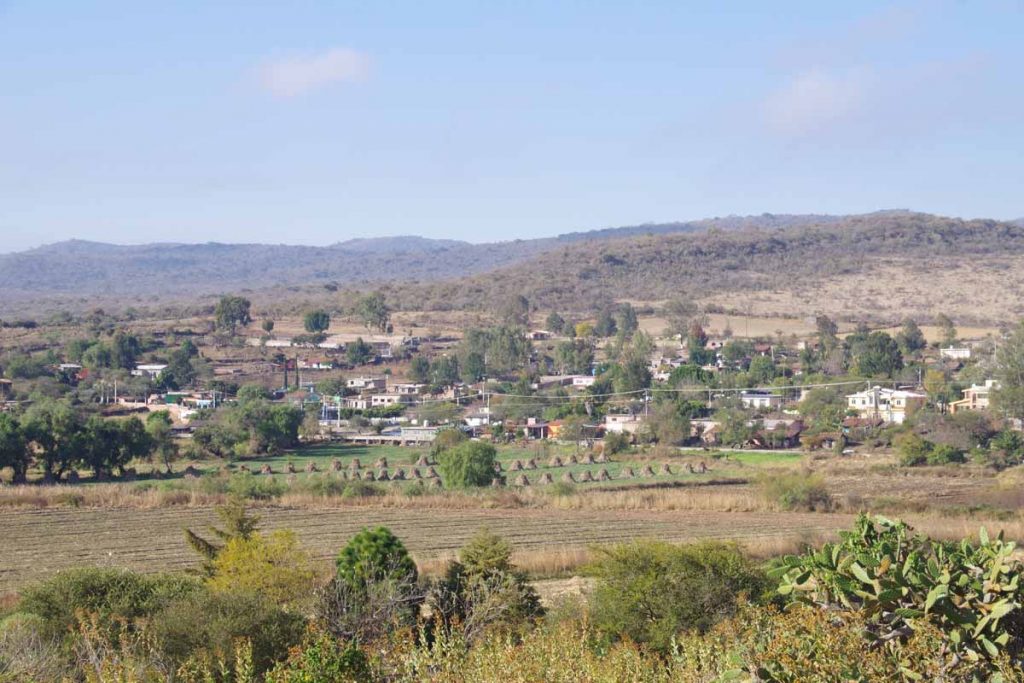 There were at least three long climbs today along with some reasonable descents. In one sense it was a mirror image of the day before with a lot of climbing early and then a flatter finish. I would pass some villages like one in photo above as well as agricultural fields. 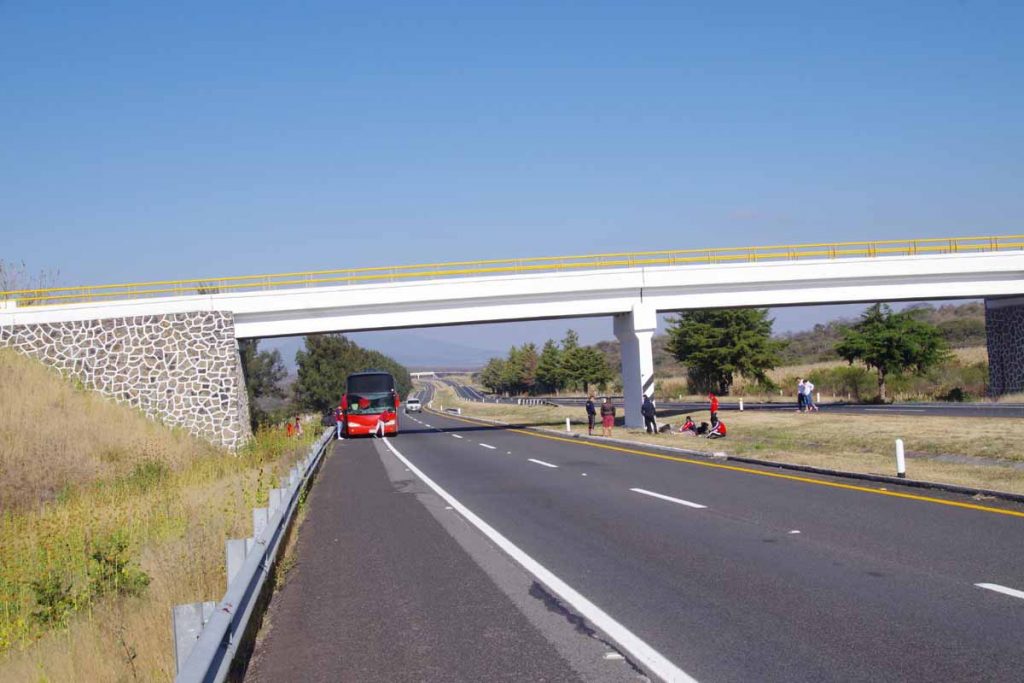 This bus had broken down and while they were working to fix it, some of the passengers had already disembarked to sit on the median area. 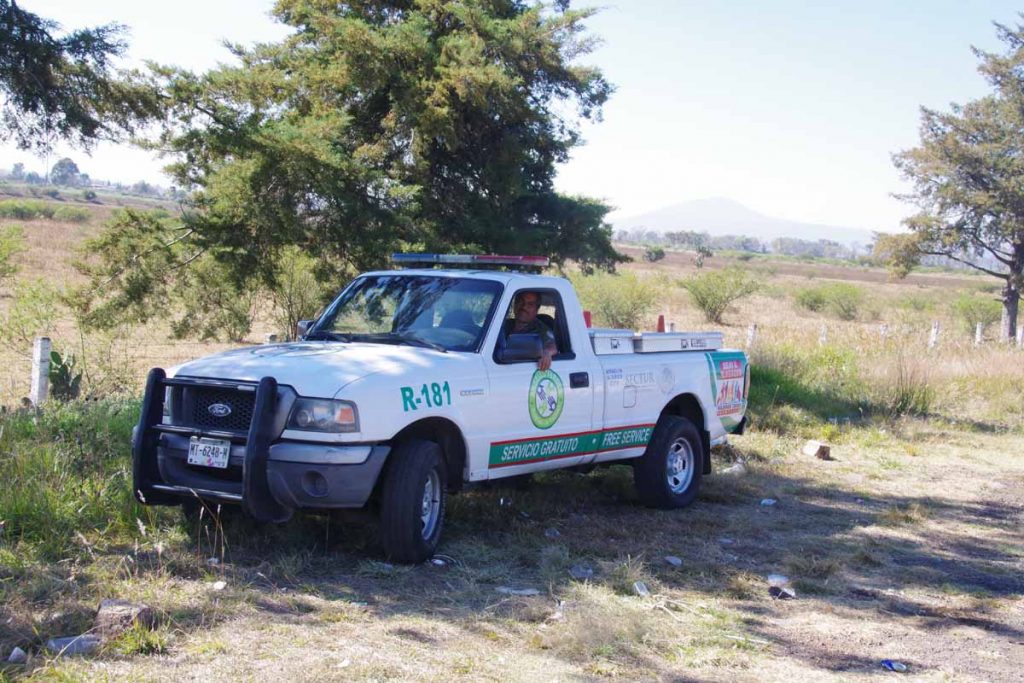 Mexico seems to have these helpful service trucks that ride the major highways and then help in situations such as when the bus broke down. I’ve seen them on the cuota here, but in Baja I also saw them on libre roads. 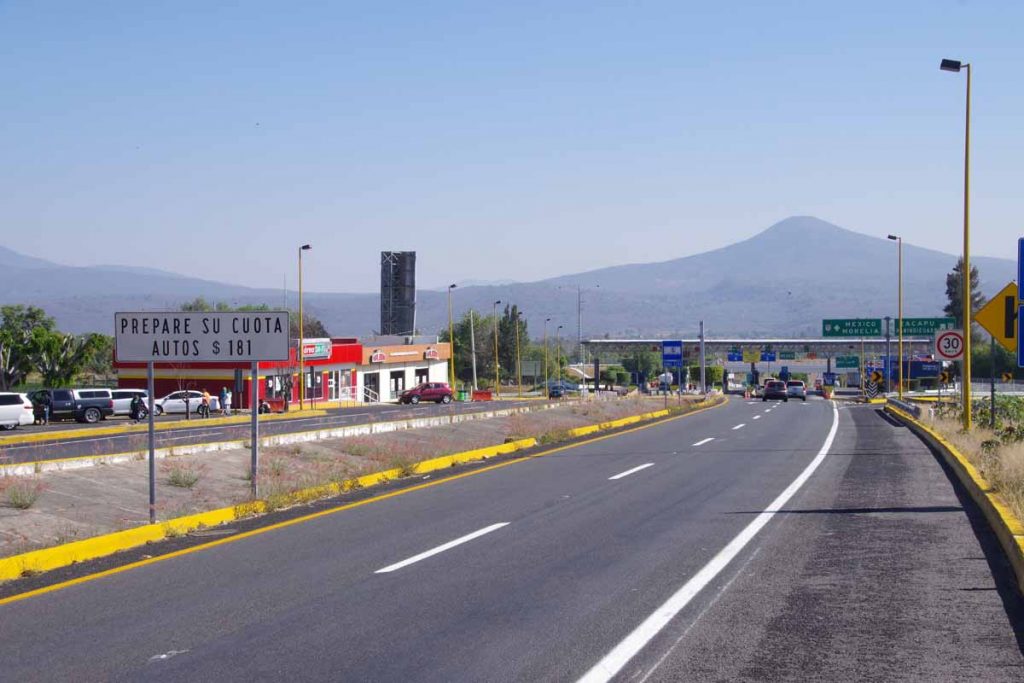 At 41km, I came to this toll plaza. 181 pesos is reasonable cost ($9) and perhaps also why the cuota was not busy at all today. Other than missing towns, as a cyclist one does end up with good shoulders and smooth roads for the most part.

I had lunch at the Subway here as this was only place all day to get food.
After this one remaining longer hill but then surprisingly the road seemed to level off. At 70km, I could see Huanqueo in distance. A previous blog had mentioned a hotel Salony or similar name. I also asked once or twice to confirm there was a hotel and then cycled into town. 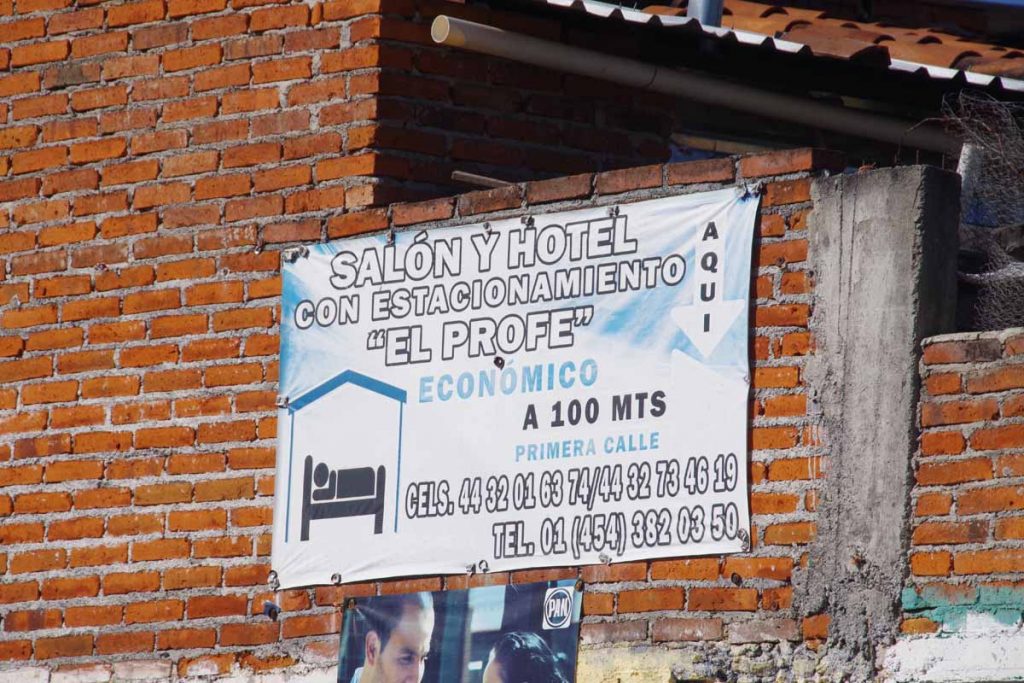 On entrance to town, there was a convenient sign (but it is a salon or hotel named “El Profe”). When I got to the first street, I didn’t immediately see it but asked someone who was able to lead me to the small hotel. 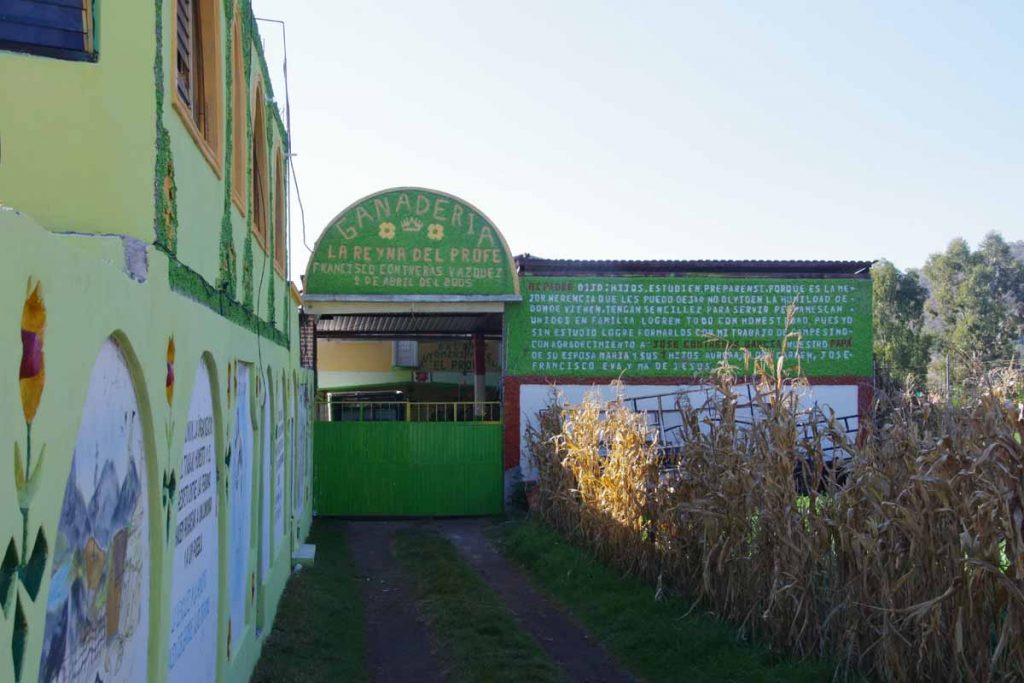 Unfortunately it was closed and nobody was around when I rang the bell. I waited for a bit and then decided to call a phone number I had seen posted. It was a good test of my (minimal) Spanish to understand that they were coming and would be there in 15 minutes. 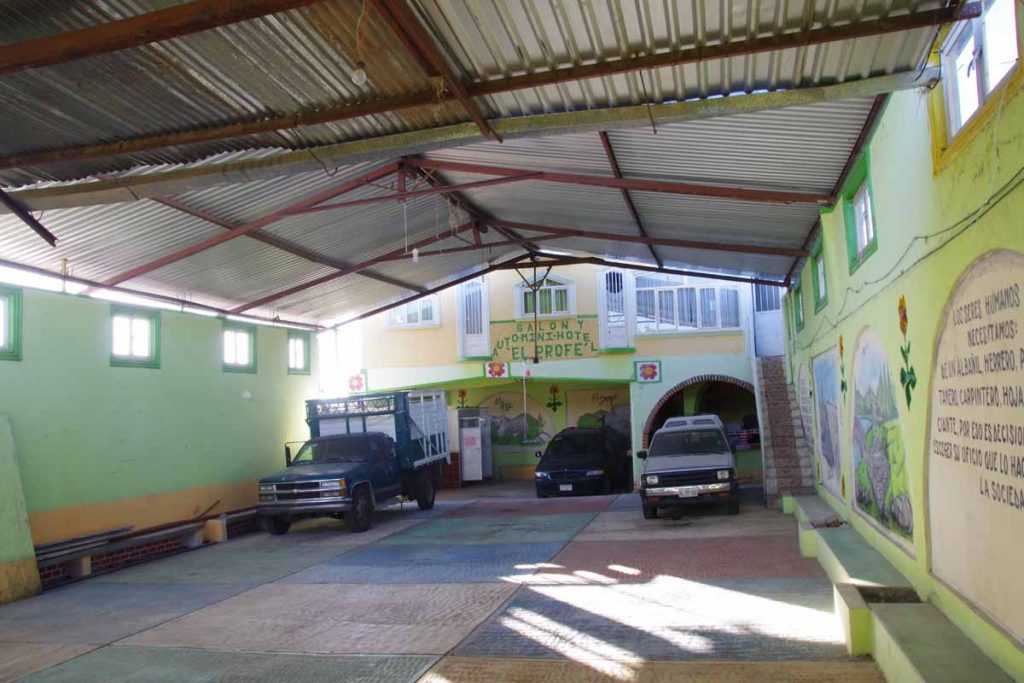 The hotel itself has a big parking bay and then those stairs up to the right that lead to three rooms. I rented one of them. The proprietor is also an elementary school teacher in town and was friendly. 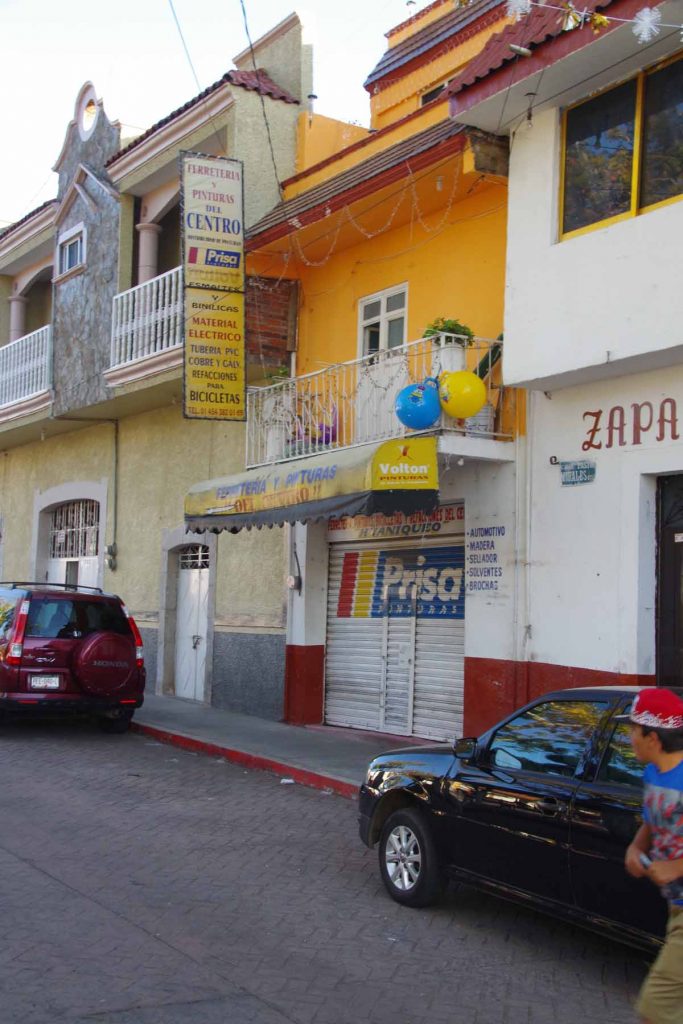 I walked around town but it was mostly closed. Here was shop that sold bicycles and electronics and other stuff. 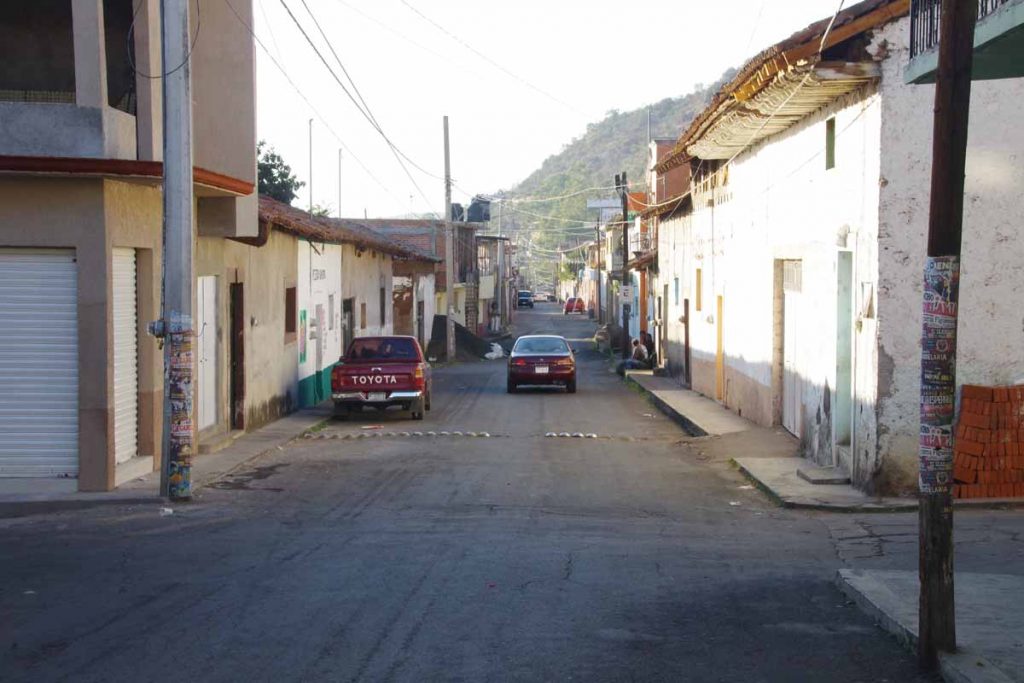 Here was the main street as it headed west out of town. There was a liquor store a little ways down where those folks were, but decided not the best place to hang around. 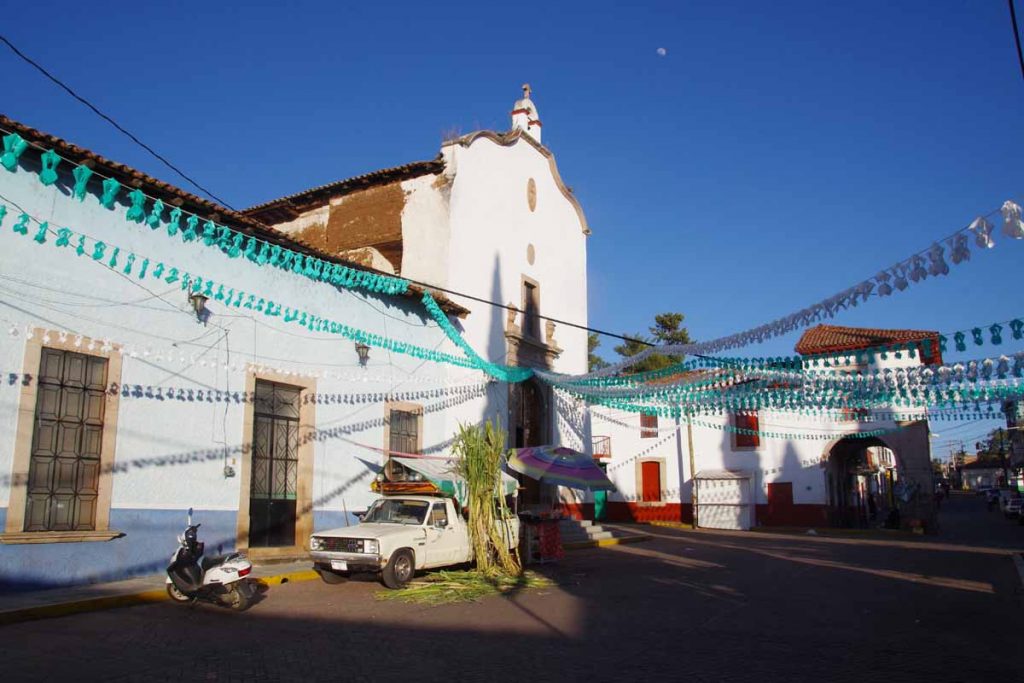 The main church. As I asked around there really wasn’t any place to get something to eat but understood that restaurants and others would open sometime between seven and eight pm. In the evening some motorists came and rented one of the other rooms. I went into town and now the town square had five or six portable food carts out serving food. Nice chance for dinner. I think the locals were amused to have such an obvious outsider and sometimes even helped with basic language.
Day Two
Today I tried a short cut through the back roads instead of taking the cuota. 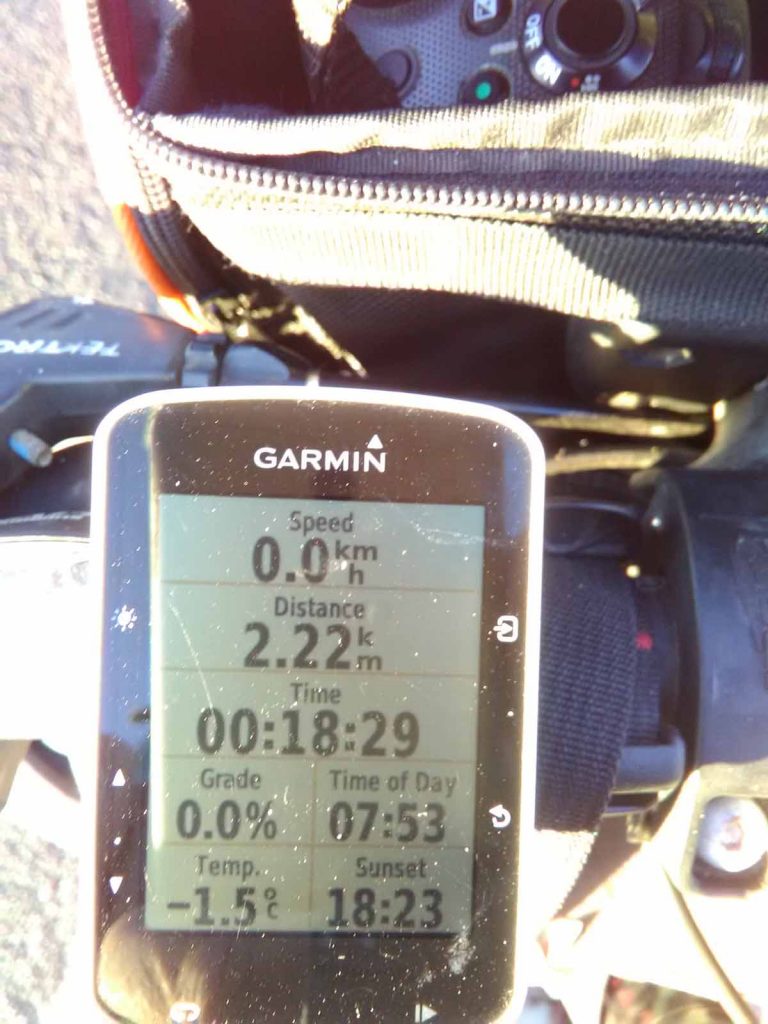 The past several days I’ve taken photo of my cycle computer each day to show how cold it is, and somehow each day has been a bit colder (-1.5C = 29F). Fortunately, no strong biting wind and it warmed fairly quickly as the sun rose. I have noticed that each of the three days after Mazatlan the small hotels didn’t have blankets on the beds and each of the last three nights the hotels had blankets. 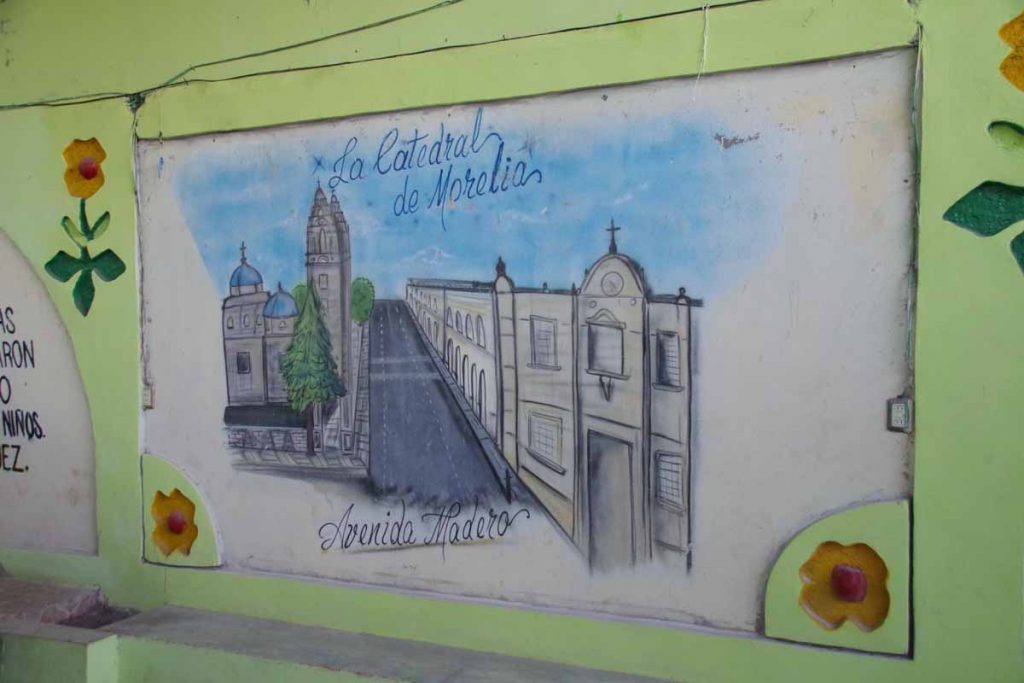 The hotel had several murals out including this one of the Morelia cathedral, my destination for the day.

First I passed under the cuota and then onto a smaller road. This went through a small village which was fun. Many of the locals were out, waiting for a bus and it was clear they didn’t have many touring cyclists come through. They looked at me and I looked at them. Occasionally there was a steep hill or two. 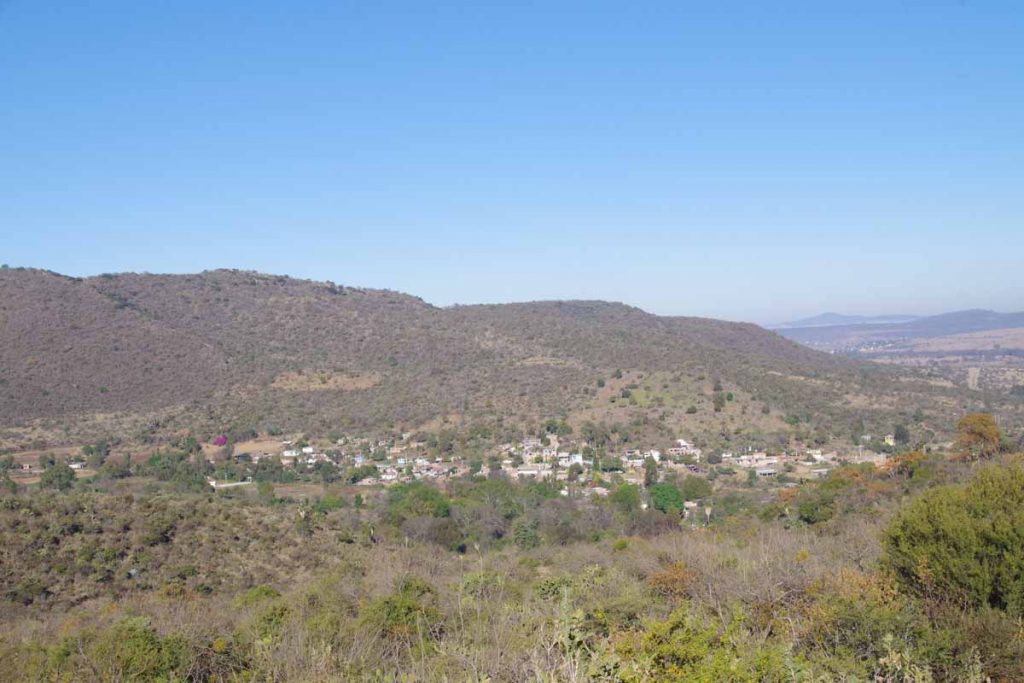 However, at the third village the road turned sharply uphill. My cycle computer had difficulty recording the incline since I was going too slow but I’m guessing short bits of ~11% or so. I walked a few of these. Photo above was looking down on the village after having done most of the climb. 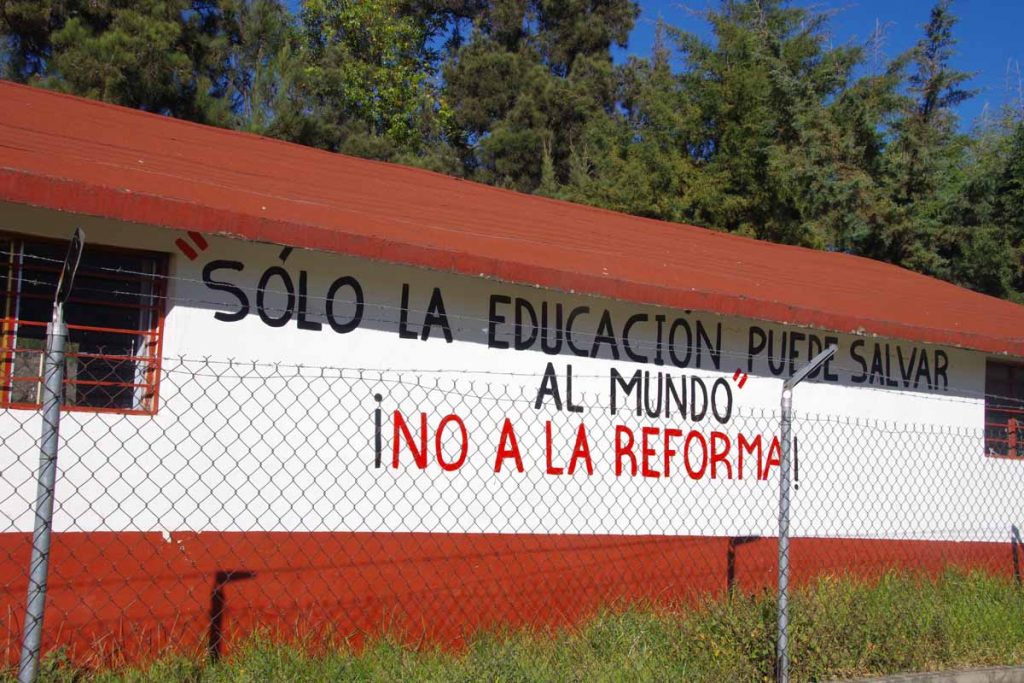 After this it leveled off and came through a second village. I get the “only education can save the world” part of the quote above, but not quite sure what the reforms they are referring to. 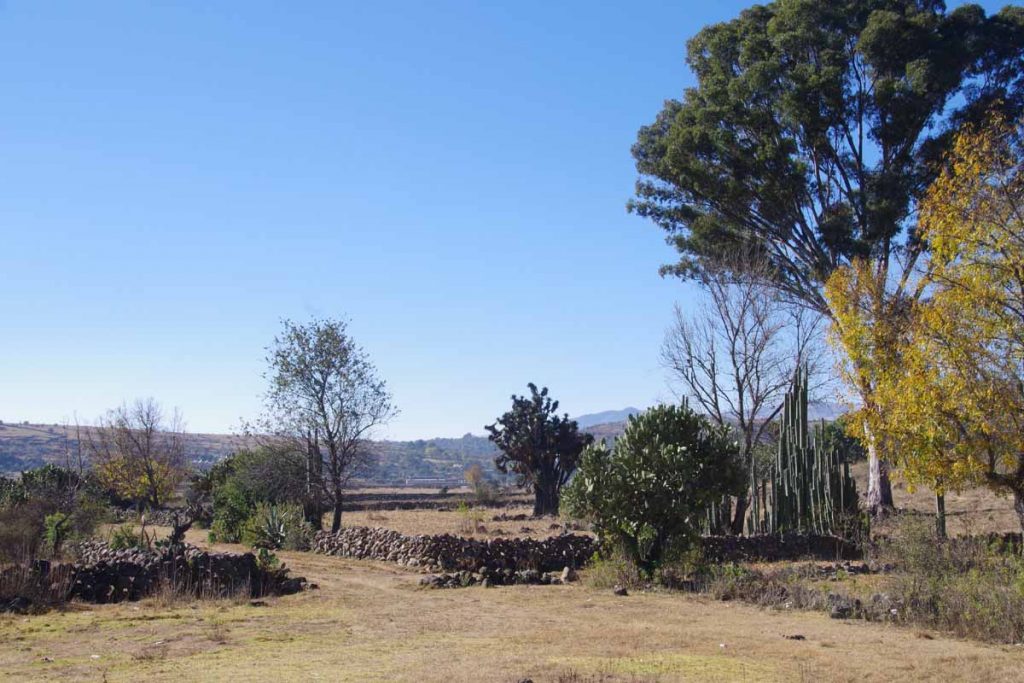 After about 15km, the steepest of the hills were past. Photo above shows items I found common here: (a) stone fences (b) large cactus type trees and otherwise wide open views. 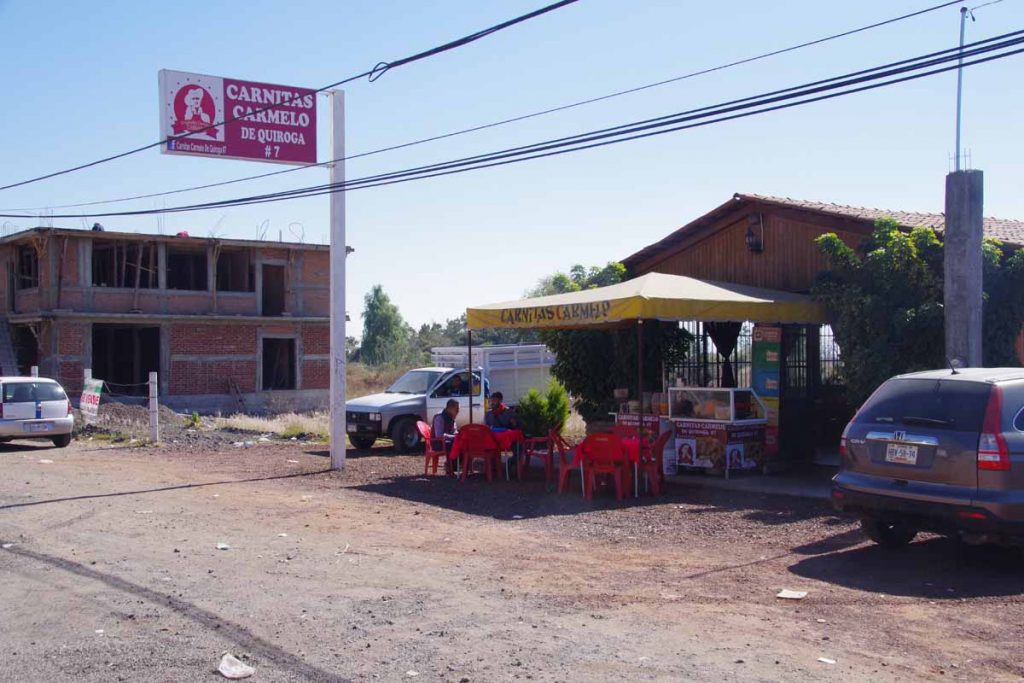 At 37km I found myself back to the main highway 15. It was two lanes with a reasonable shoulder. I also started to see some places to get food. 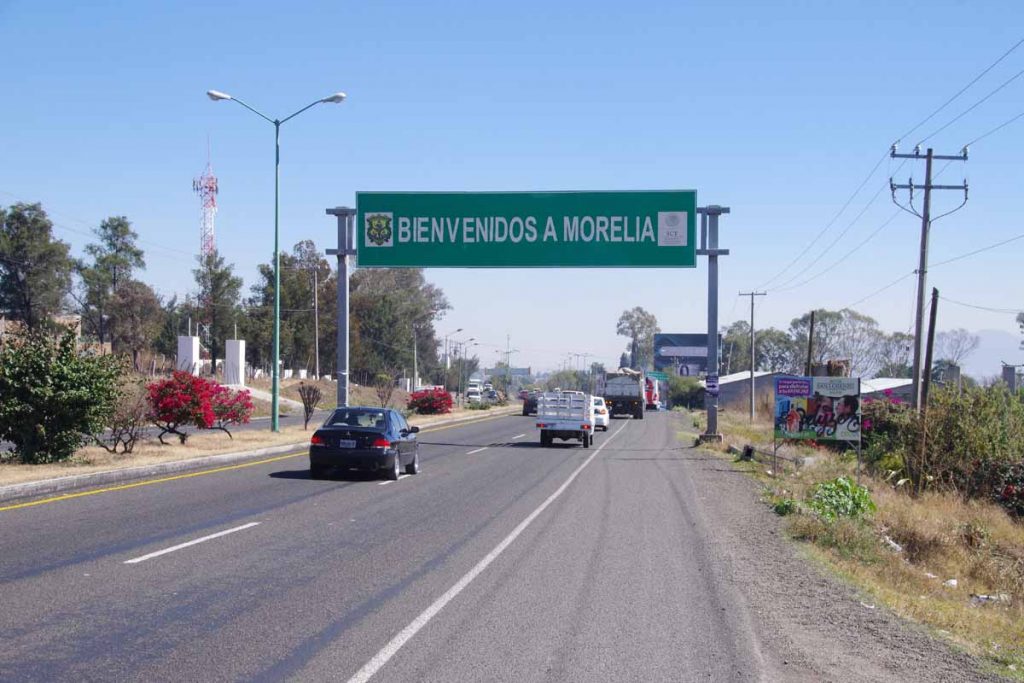 A few kilometers further entrance to Morelia. Here the shoulder of the main road was replaced with a frontage road on each side. These were occasionally bumpy and occasionally blocked with truck and bus traffic, but otherwise surprisingly nice to ride into the city. 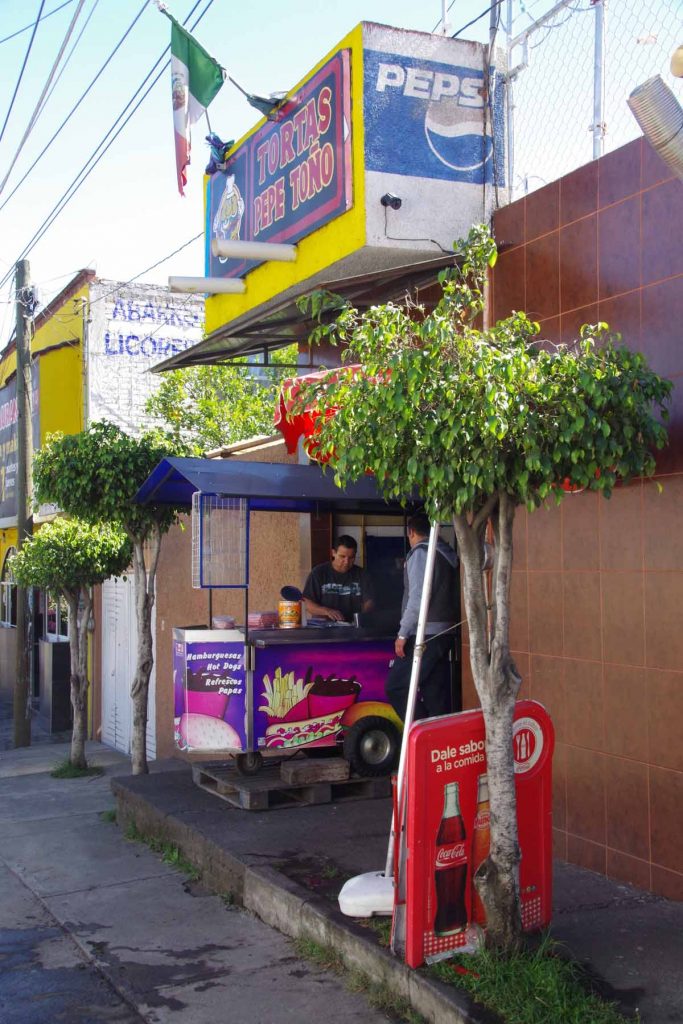 Ah, lunch at last! This small shop had an excellent chicken type burger. 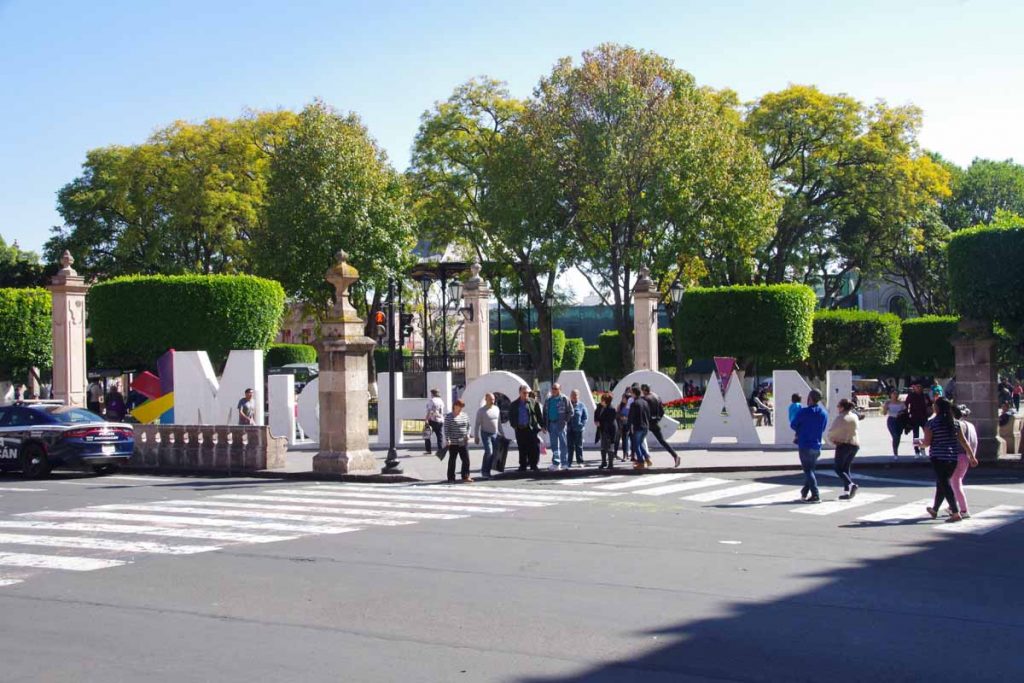 After this the last 8km cycling with some of that walking some sidewalks and I was at the main square. Found a place to stay not far away. 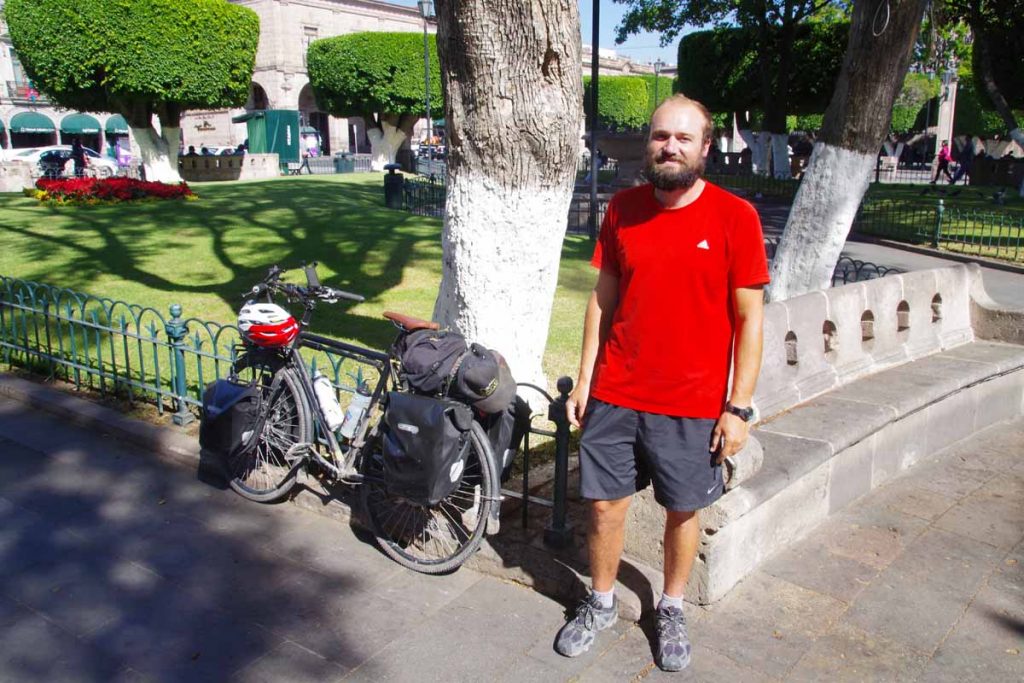 Met another touring cyclist on the main square. He had started in Georgia and was slowly winding his way down to Panama. 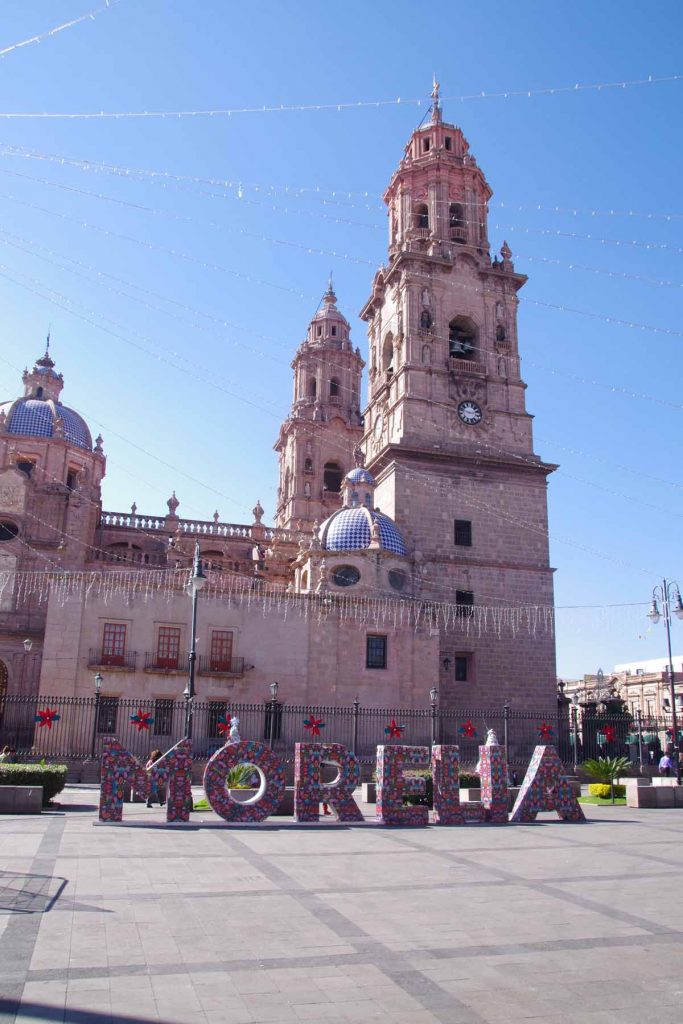 A photo of the main cathedral. 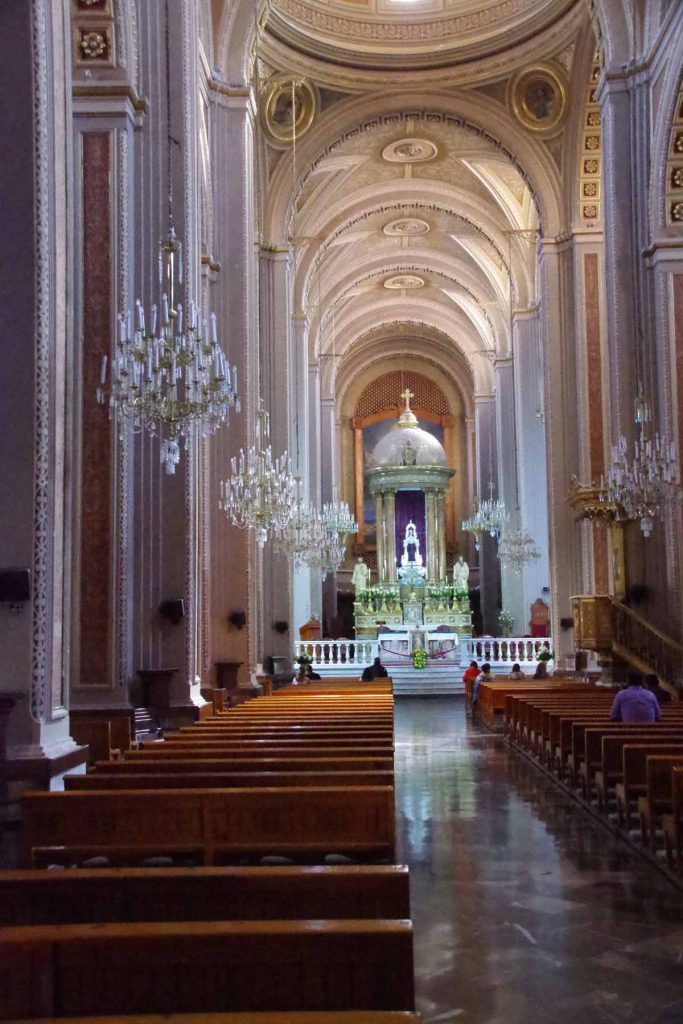 Simple but elegant interior. Nice to get to a somewhat larger city after these smaller towns.