Two days riding, each with over 1000m of climbing have brought me to Atlacomulco. This is end of the main cuota stretching from Tepic towards Mexico City. My plan is to skirt Mexico City around to the south. 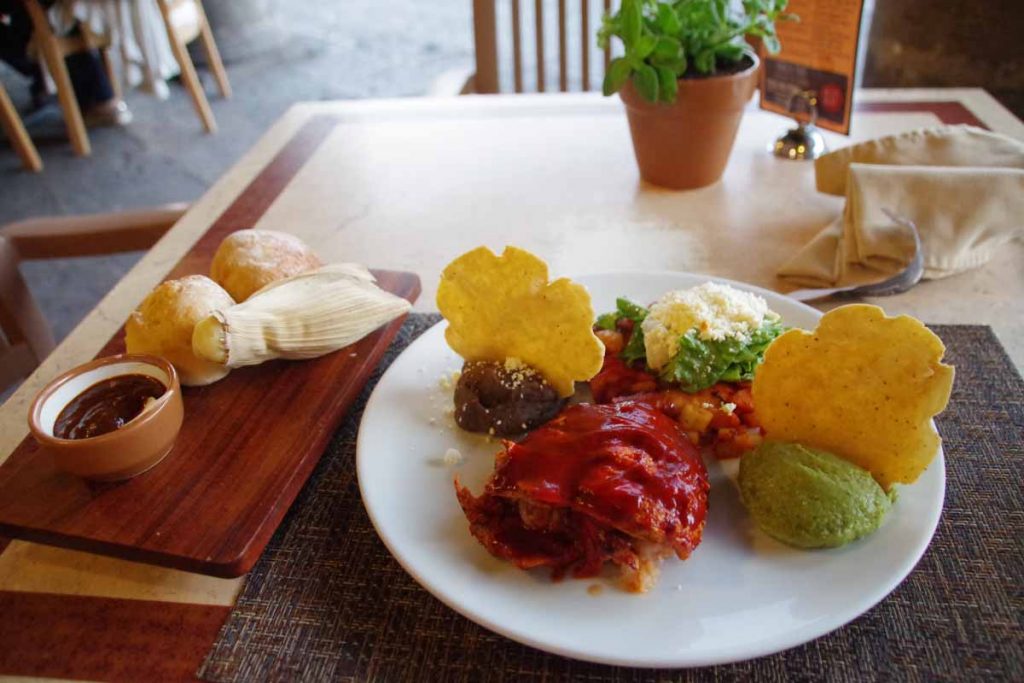 Before describing last two days riding, a note about food. Photo above was one of the most elaborate presentations of dinner. This one from restaurant in Morelia. Often, I’ll find a restaurant on my end city, but a lot of the time, I’ll also grab street food such as tacos from vendors on the street. During the day, I’ll stop at local shops or OXXO and get yogurt or cookies or other items as a snack.

By the way, meal above was 150 pesos (~$7.50) so more than average but not overwhelmingly expensive. 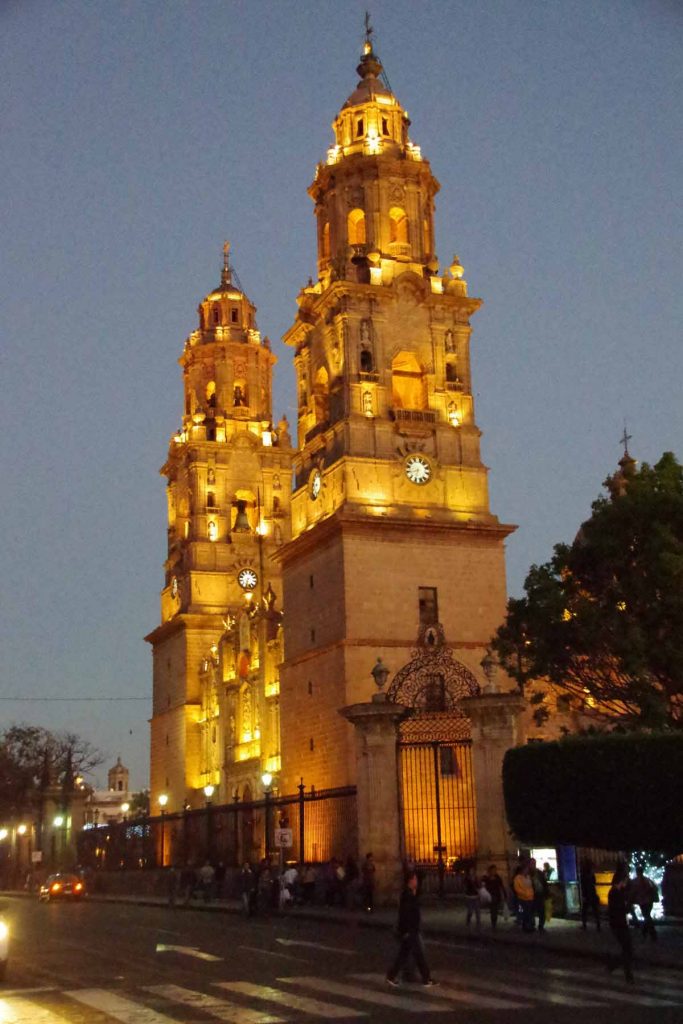 I had fun taking pictures of the cathedral after dark. 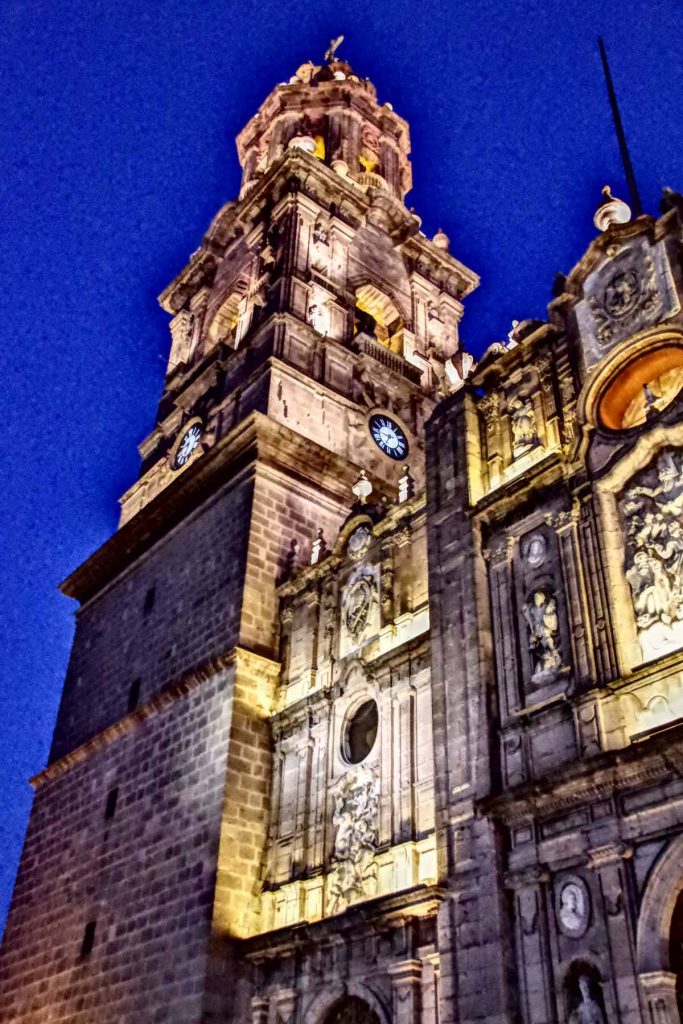 This was trying the HDR mode on the camera.
Day One
Today had a little of everything in it: city riding, rural roads and cuota. It was mostly flat for the first 55km and then a large hill to climb over in the last 40km. Leaving Morelia was a little more hectic than arriving. The larger city streets turned into an expressway leaving town with three lanes of high speed traffic. Initially this still worked well since the rightmost lane also had a lot of buses stopping and starting so was all slow. However, once I left the “bus zone” it was a bit faster. Fortunately less traffic leaving the city than arriving and by 9km, I turned onto the smaller road to the airport. 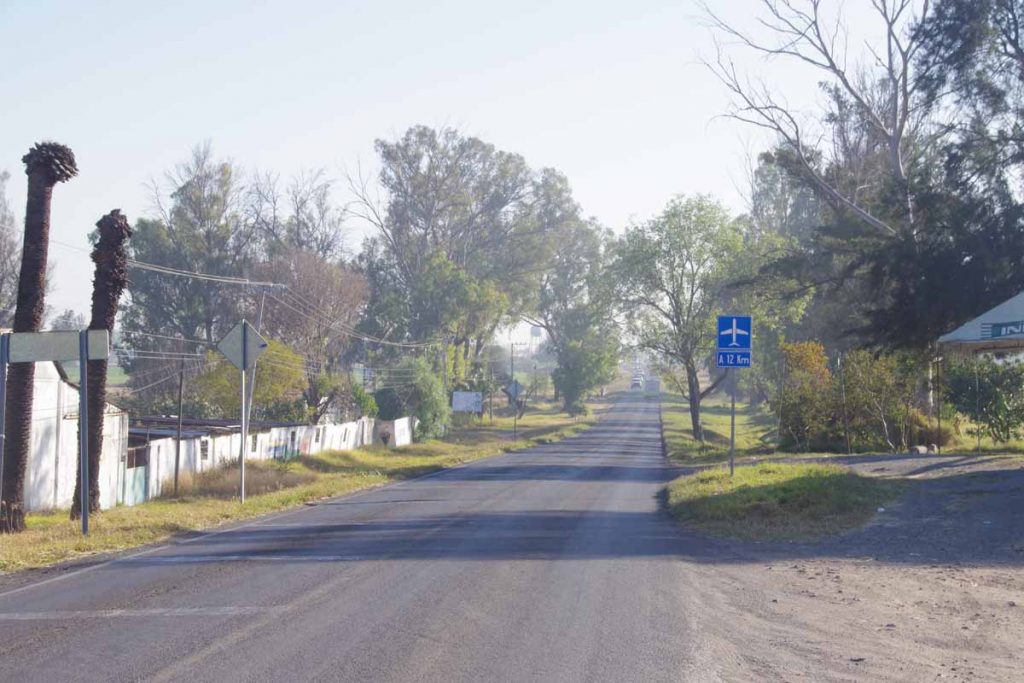 Photo above shows the nice calm road on way to the airport. Unfortunately, just before this was surprisingly busy because inbound traffic had all backed up, I think partially due to a school and partially general congestion. This meant outbound traffic including myself didn’t have a very wide lane and occasionally traffic would back up behind myself as well. Fortunately, this all only lasted a few kilometers before we got to quieter road above. 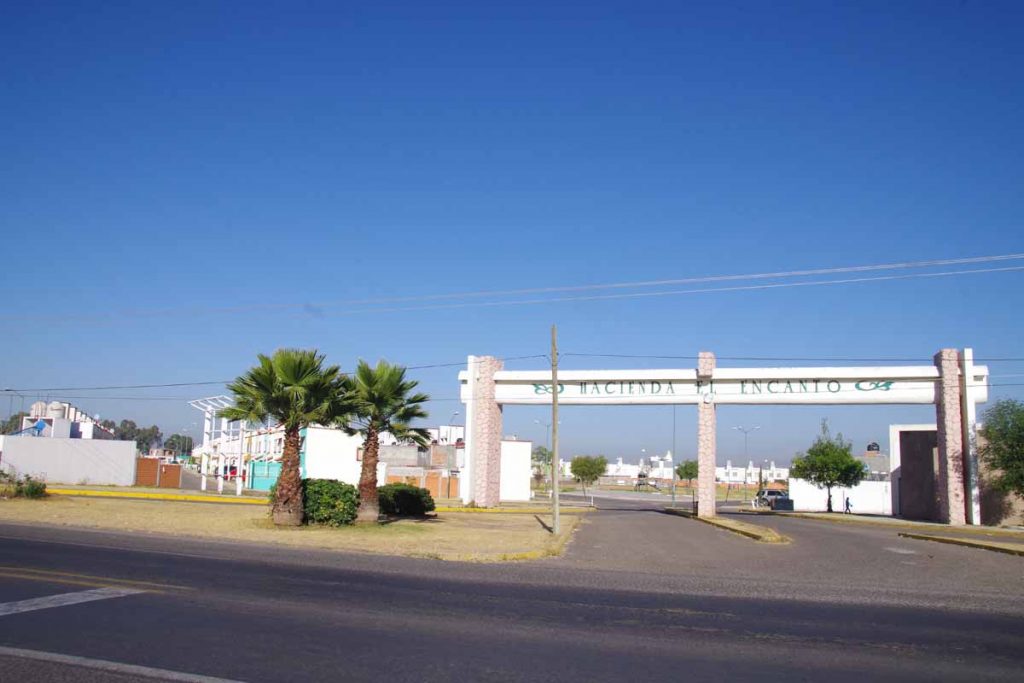 Around Morelia I’ve seen more of what look like subdivisions to me. A nice fancy entry and streets with cookie cutter houses. You can see some of them on the left. 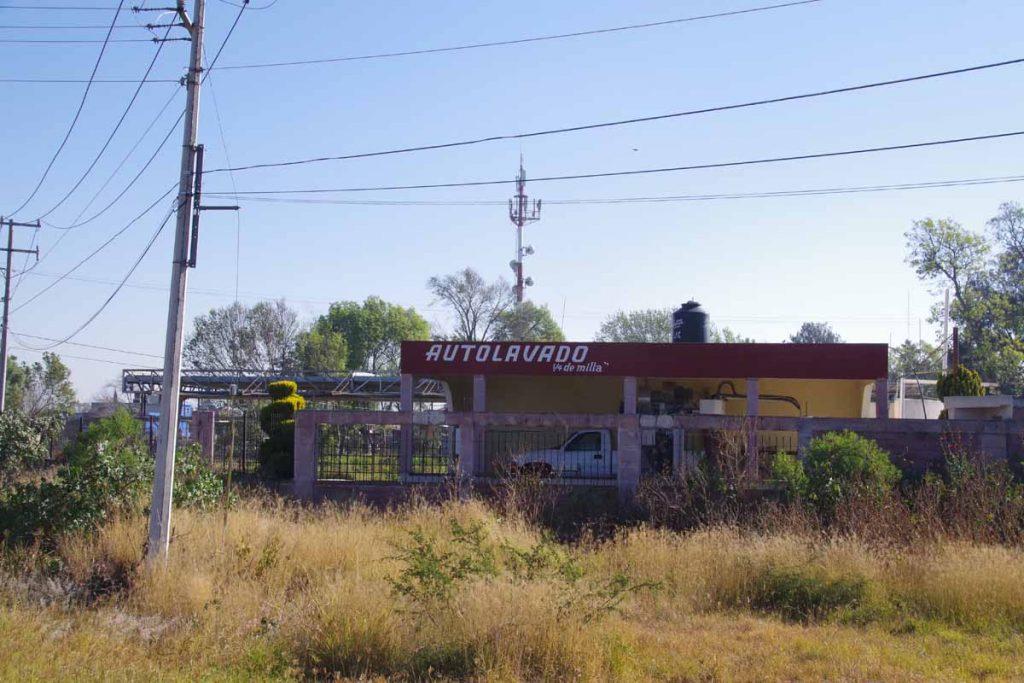 A few blog entries ago, I mentioned I had most often seen “car wash” in English. Around Morelia I did actually see Spanish at least twice as well. 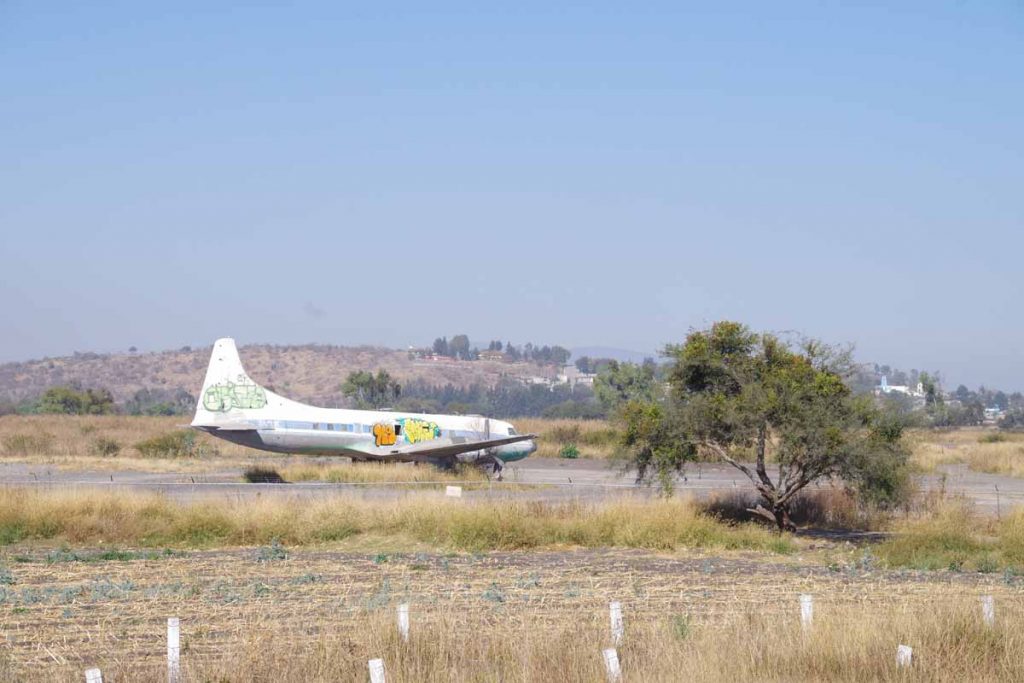 At 25km, I passed the airport. Not sure why this old graffiti marked plane was parked. 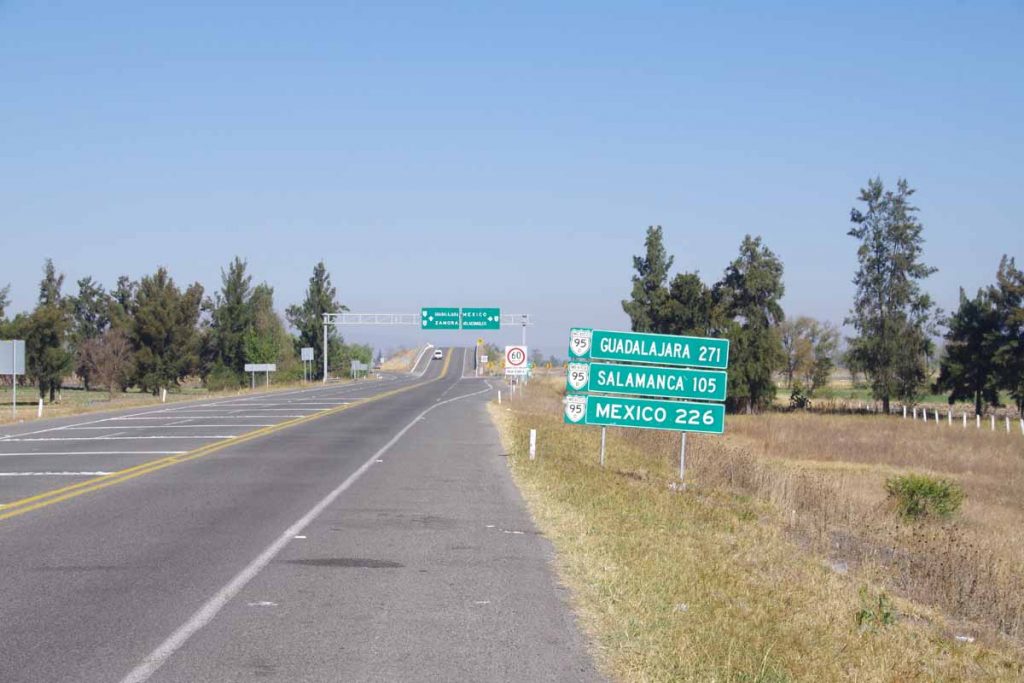 A few kilometers later, back to the main roads. Nice to see I’m closer to Mexico City than Guadalajara. 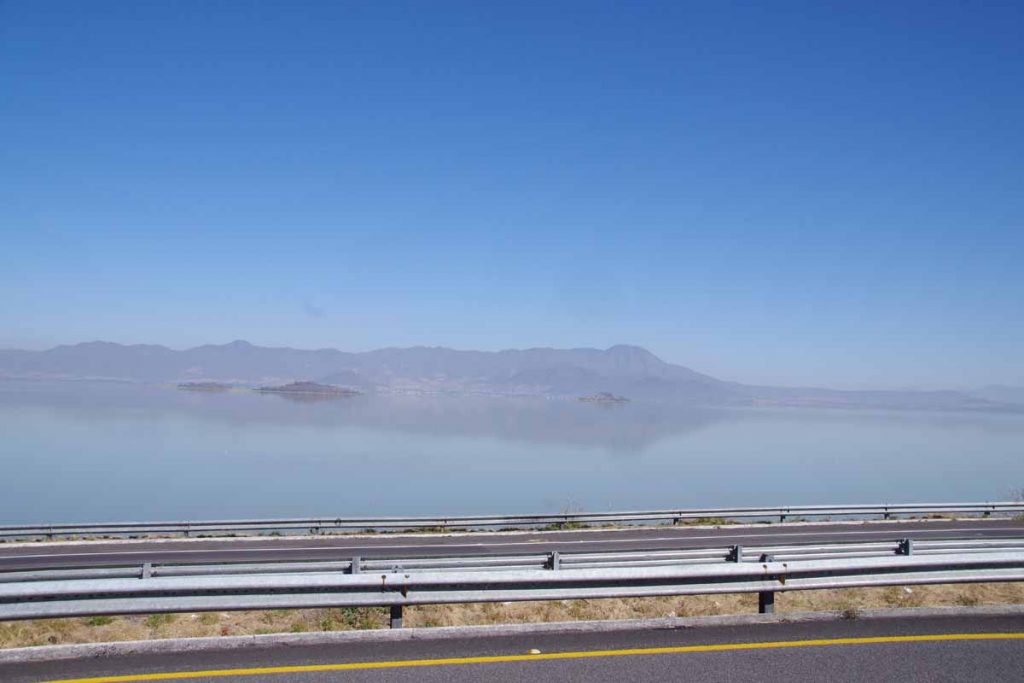 Next 25km were nice and flat, including passing by a large lake. At 55km were toll booths and a service area where I had lunch. 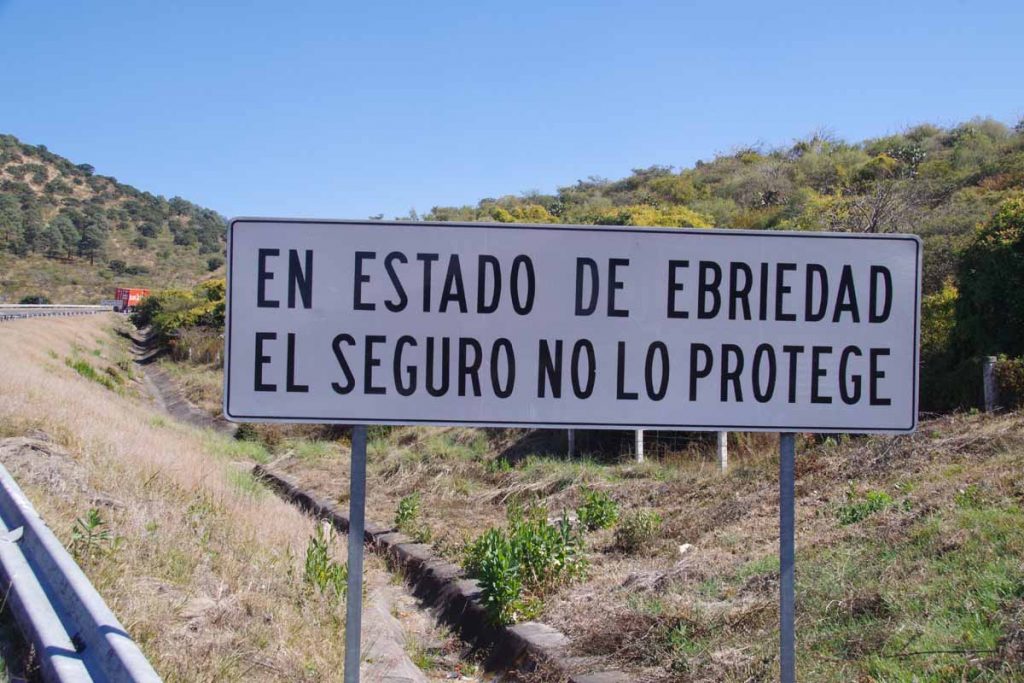 This was start of a big hill including this sign I think telling you being intoxicated invalidates insurance. 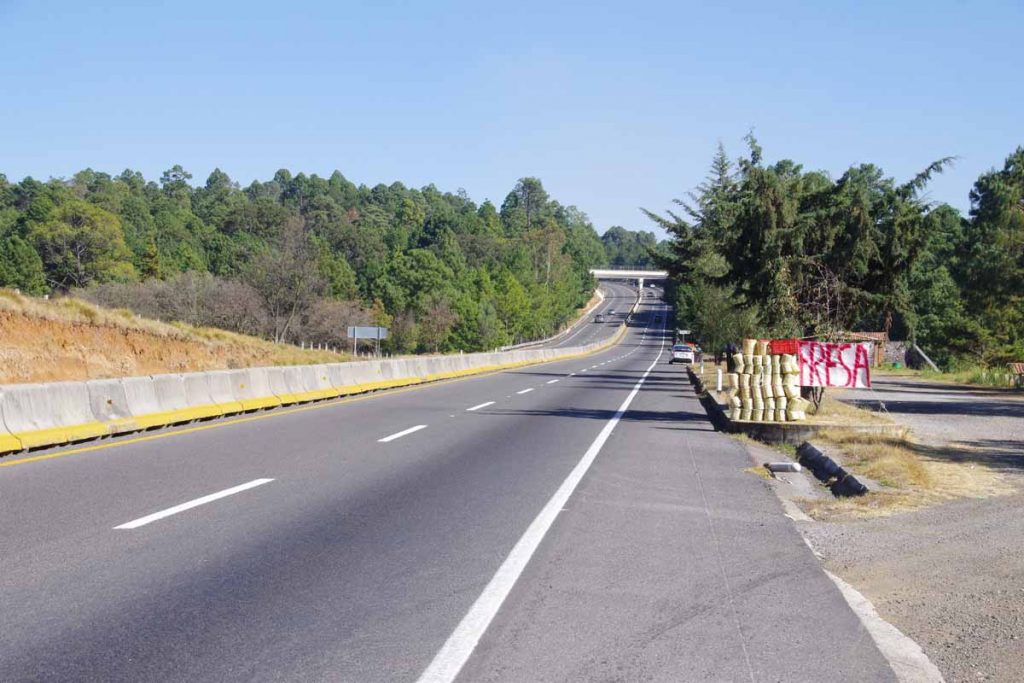 Climbed ~600m and around the top was this vendor on side of the road selling baskets of strawberries. 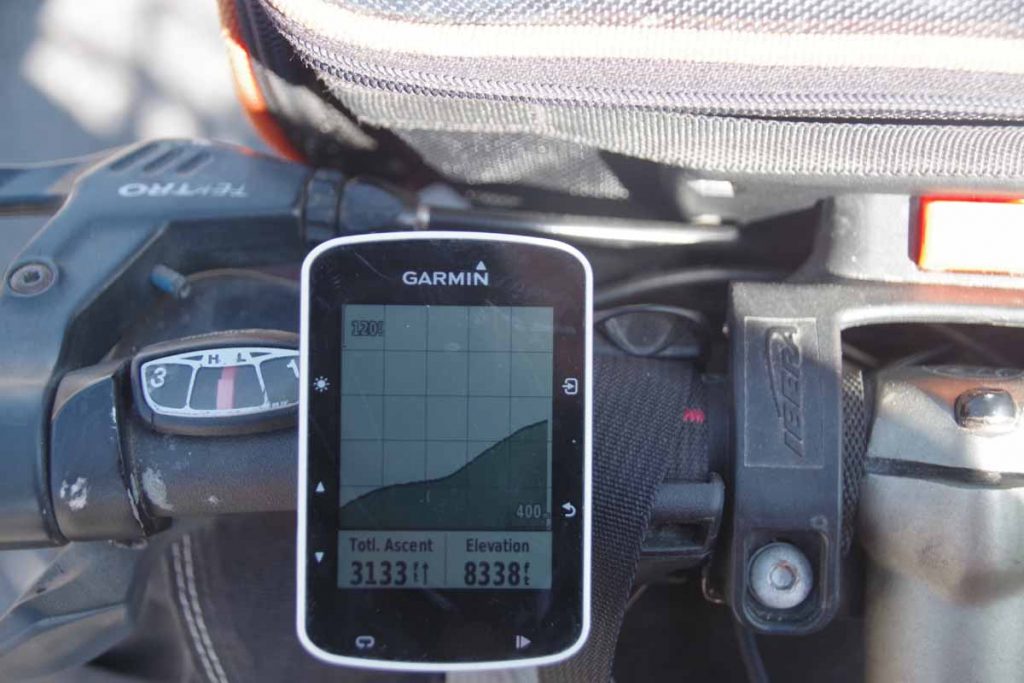 Top of the hill! My cycle computer is set up in a hybrid mode with distances in kilometers but elevations in feet. 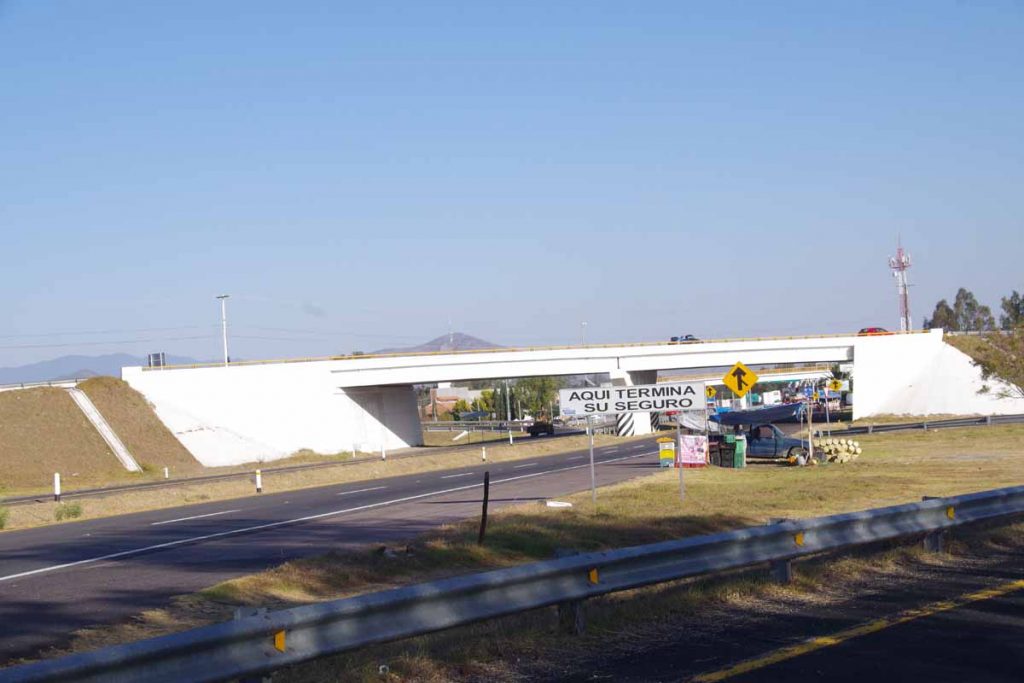 A nice descent again and I found myself at the road exit to Maravatio. Coincidentally whatever extra insurance you had (unless drunk) also stopped here. 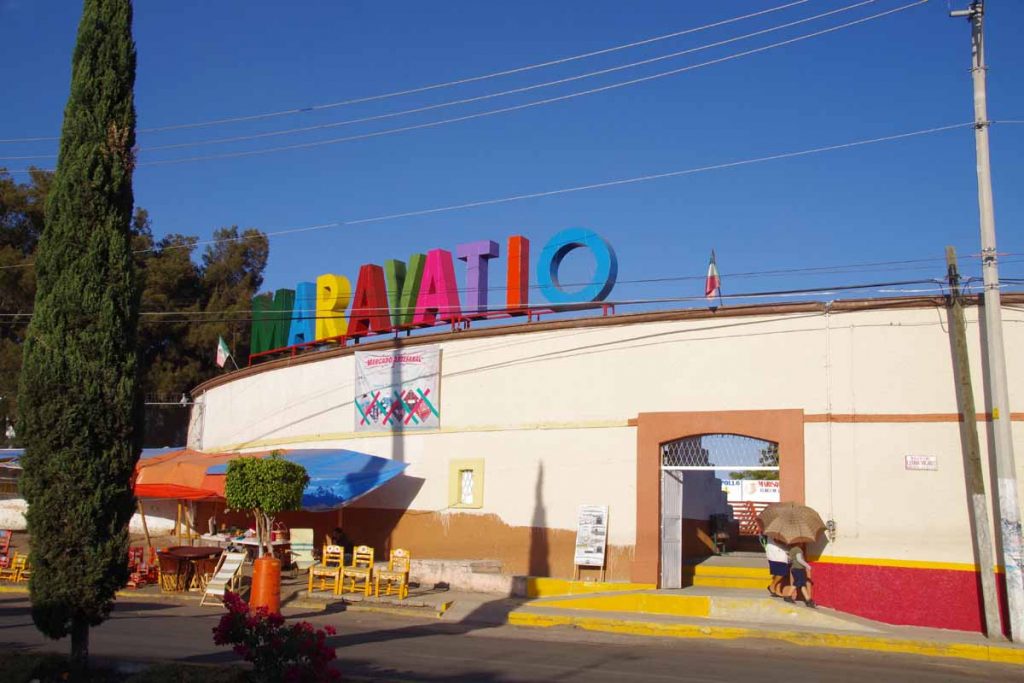 As I cycled into town, I felt the rear tire being flat. I cycled a bit and then walked the last little bit to a hotel in center of town. First thing was to get the flat fixed and then shower and walk around town for dinner. Overall a longer 96km ride with a substantial climb at the end, but also pretty riding with a lot of variety.
Day Two
Climbing throughout the day today, though not as far in distance. 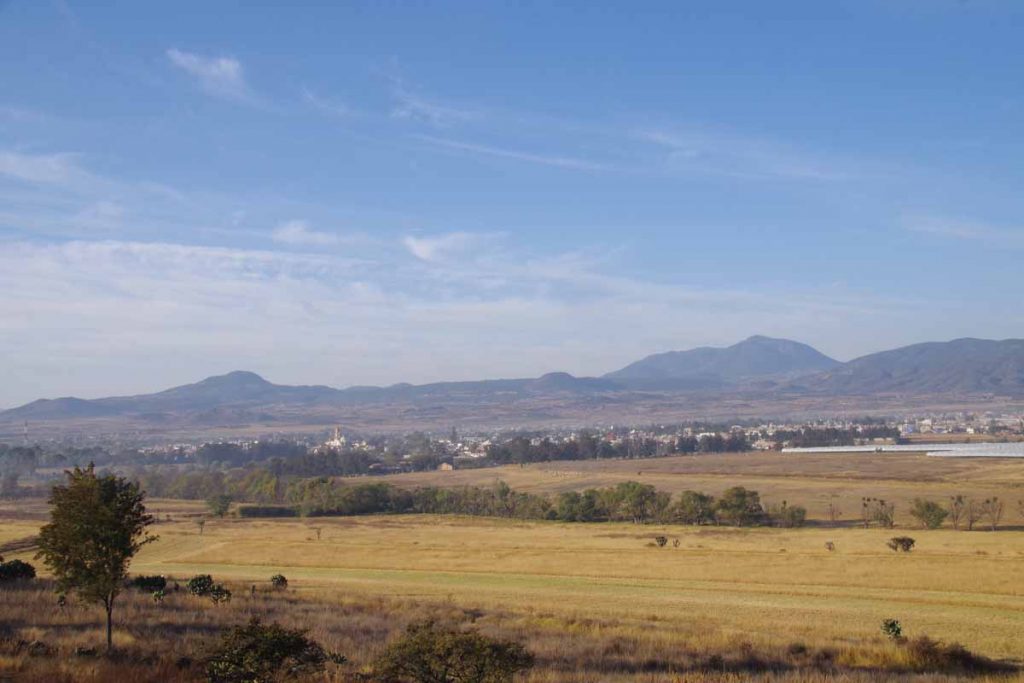 I tried waiting a little in the morning to make sure it was getting warmer. Photo above is looking back at Maravatio after getting on the highway. 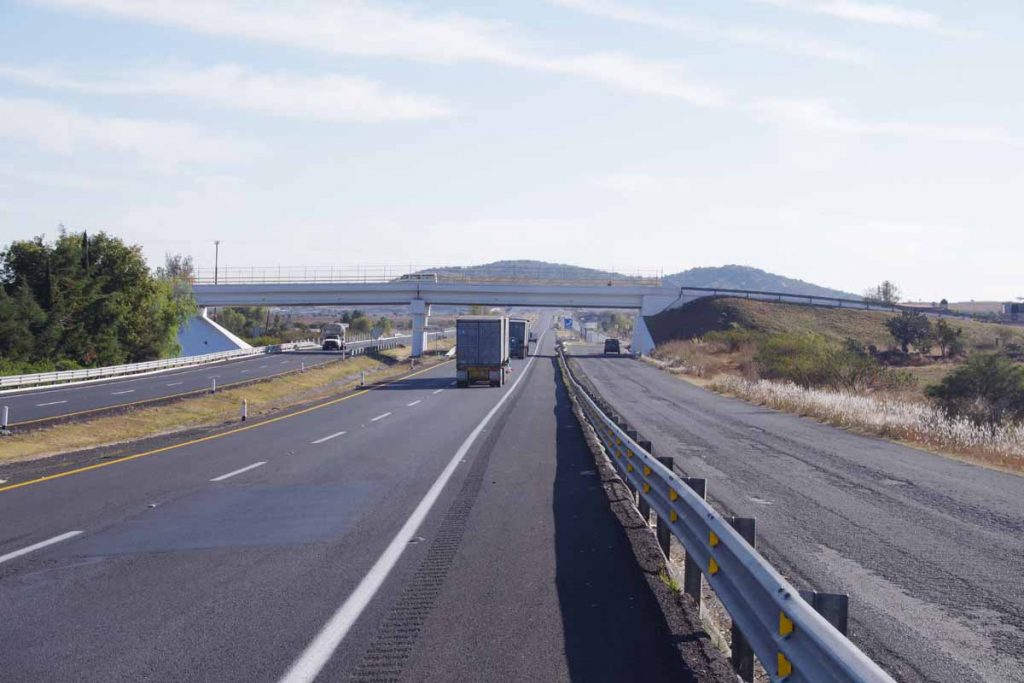 Today there were a number of sections that also had a frontage road running alongside. You can see the main highway, a small rumble strip, the shoulder and then the frontage road. The frontage road was sometimes unpredictable and looked occasionally rough. 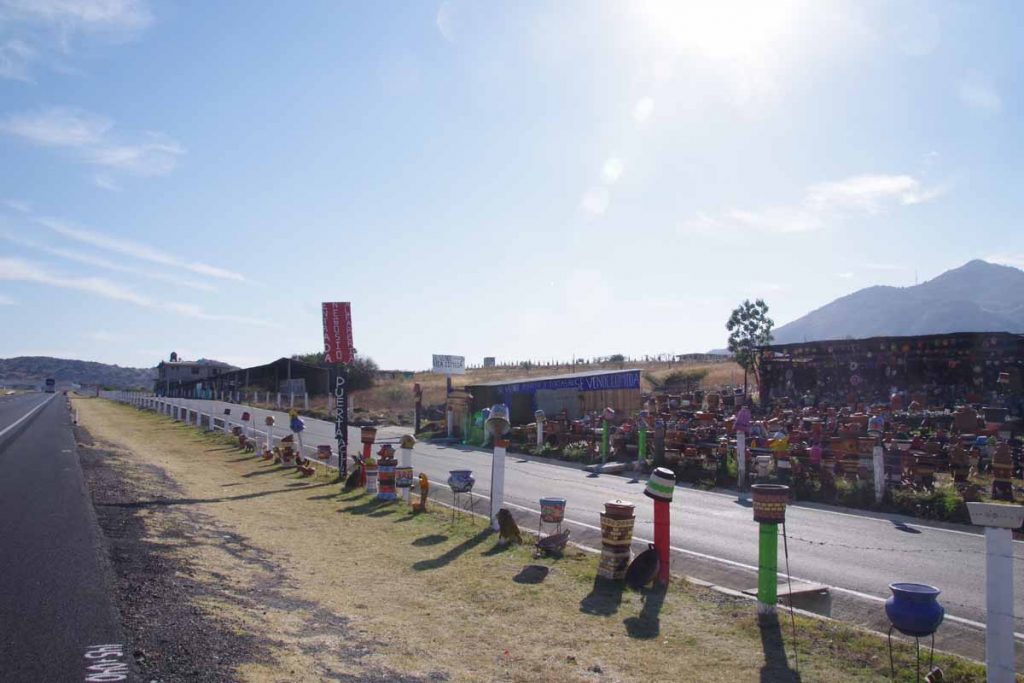 In a few spots there were explicit gaps placed so someone could park a vehicle on side of the cuota and visit a business. 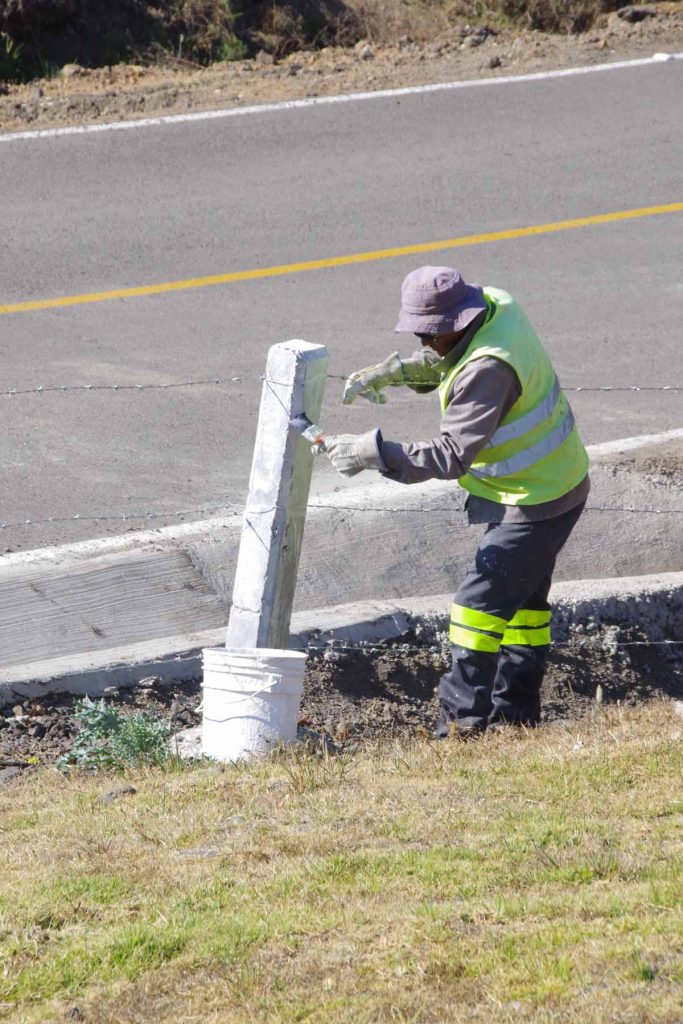 However, in general the cuota usually has a barb-wire fence with white posts on it. From others journals I’ve found a few who try riding these roads and camping and often end up camping at the service stations behind a Pemex gas station or other place with access to bathrooms. Typically they do not go across the fence, since that is most often private property. 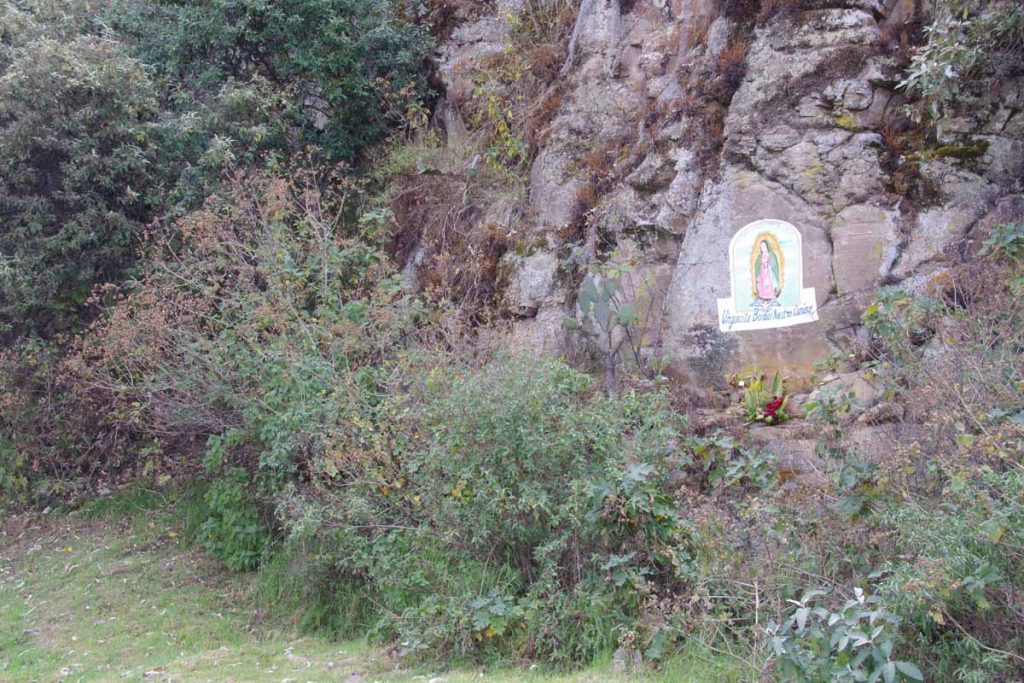 There weren’t too many stopping points today. At one point, I did cross the highway to visit small store only for the other direction. Photo above from one of the climbs with painting of virgin Mary along the way. 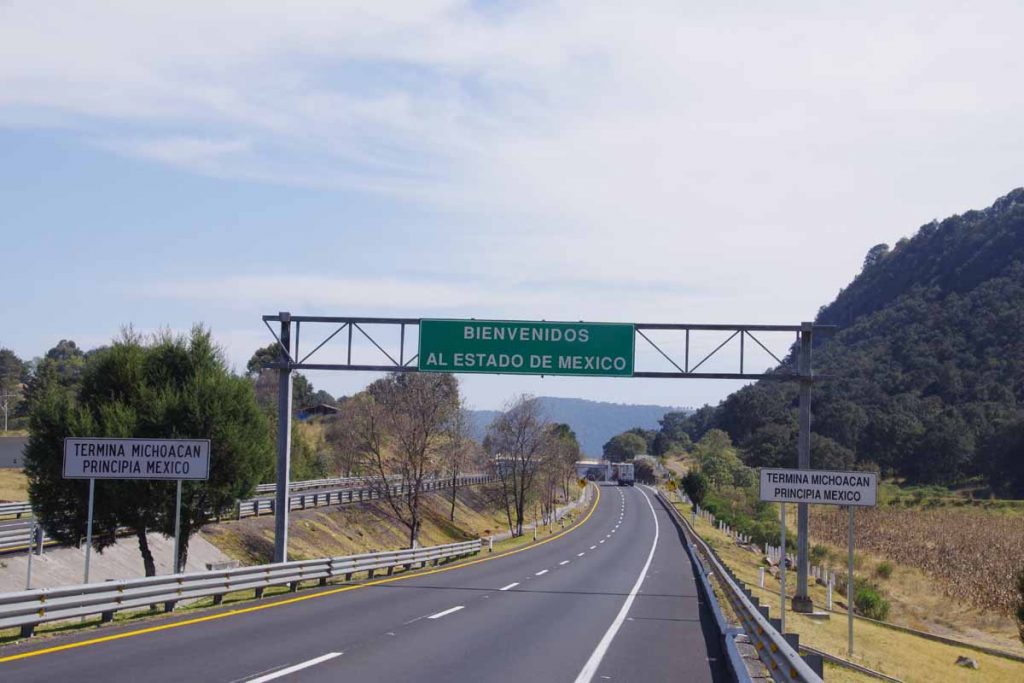 Close to top of one of the hills I exited Michoacan and entered Estado de Mexico or the special state that contains Mexico City. 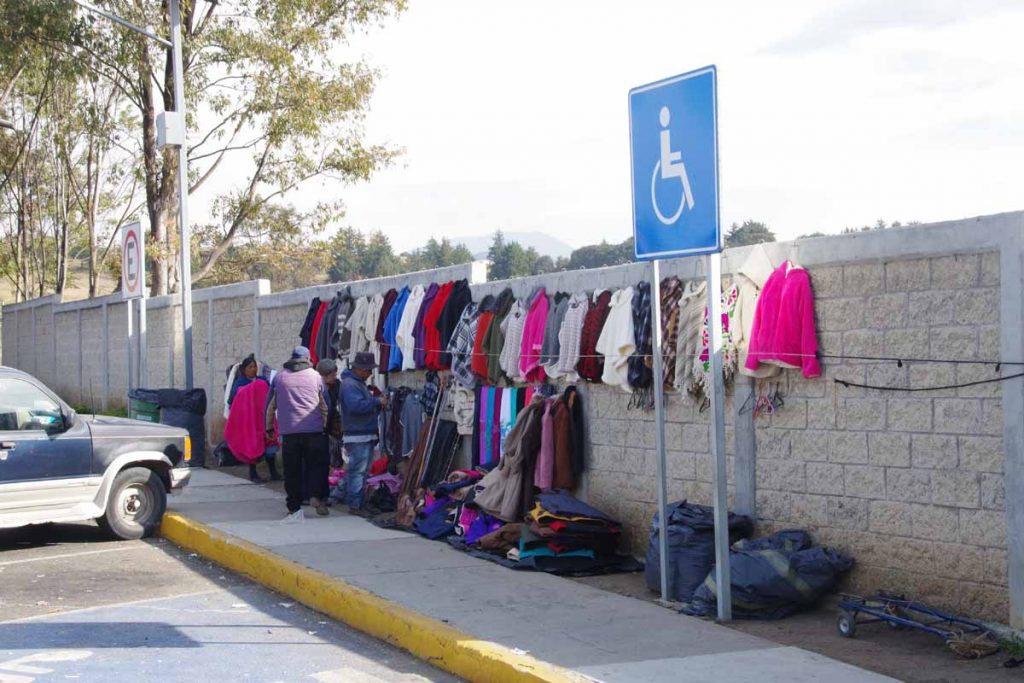 At one of the service areas a local was selling garments. I noticed many of them as well as what I see in Atlacomulco are thicker heavy garments like sweaters. 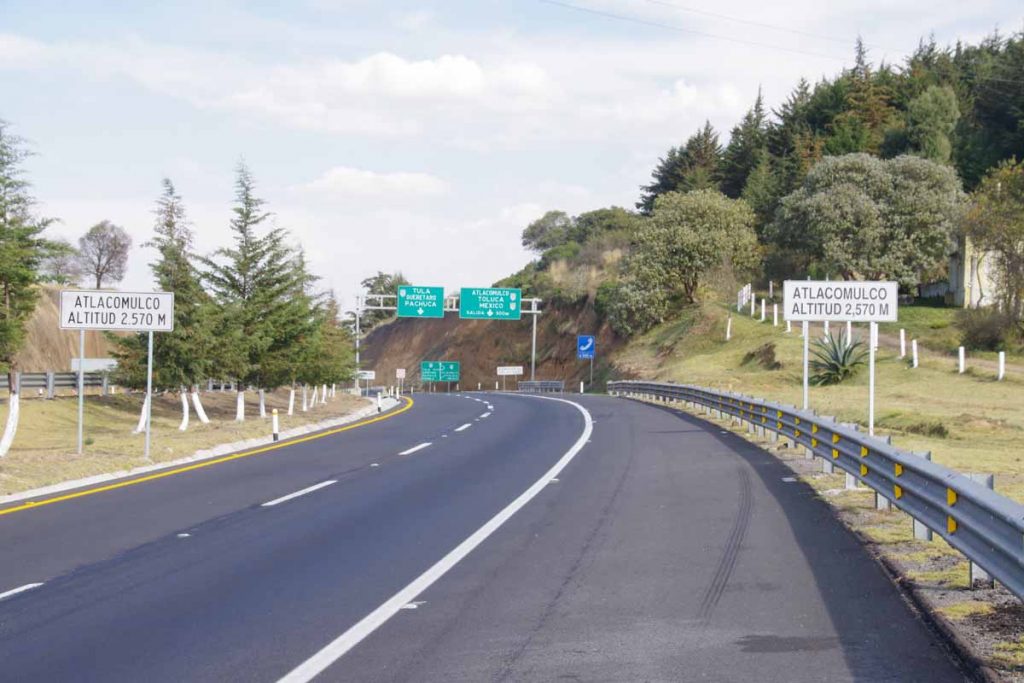 I reached end of the cuota as well as elevation 2570 meters (8400 feet). A few kilometers of busy highway and I was in downtown. 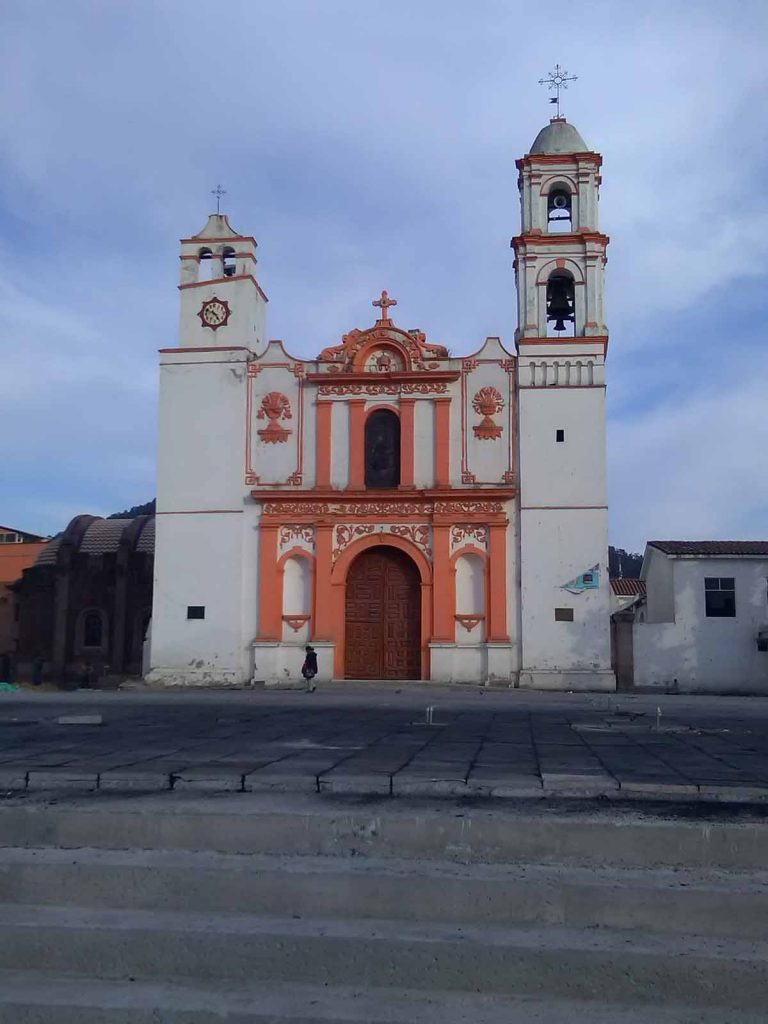 I wandered around town. There is a nice plaza with church. 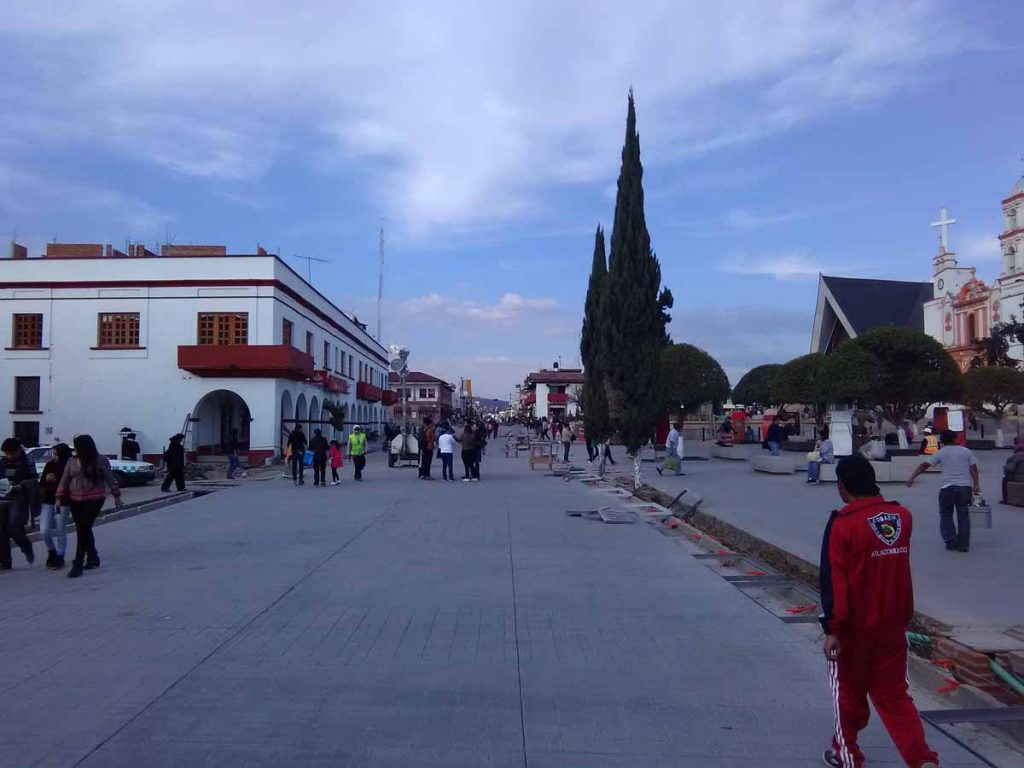 They are busy rebuilding a lot of the plaza. 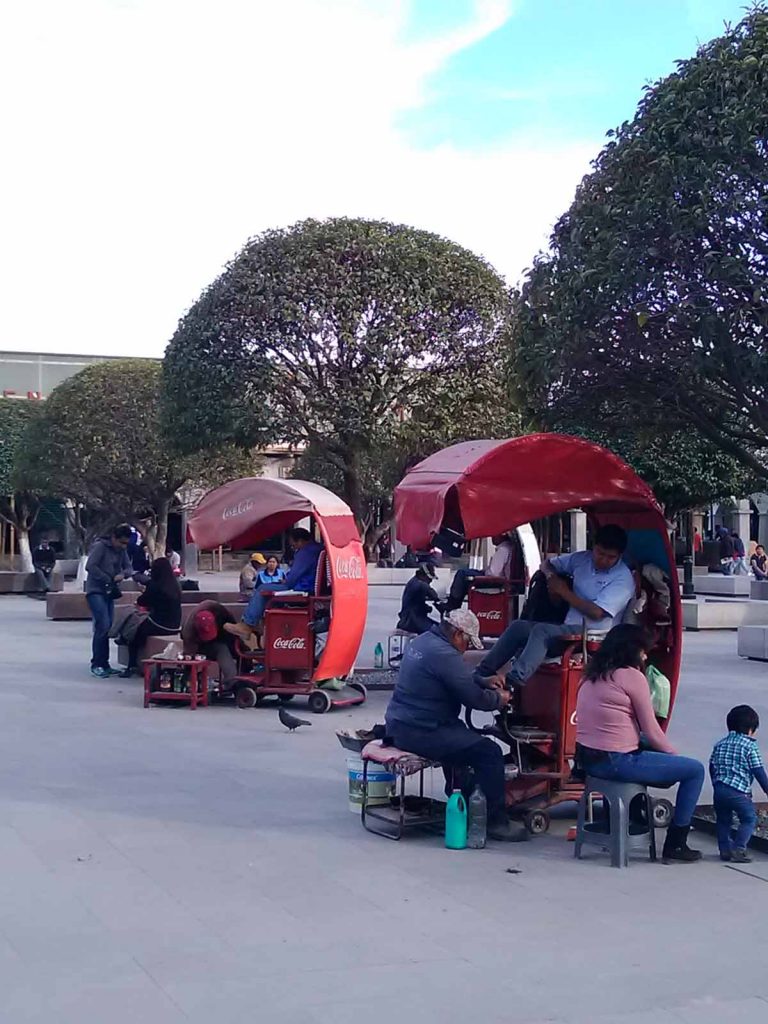 And of course lots of shoe shine vendors here as well.