Today we experienced kindness of strangers on our ride.

Had a nice rest and restful day in Guatemala City. Walked a lot, but didn’t ride my bike anywhere. 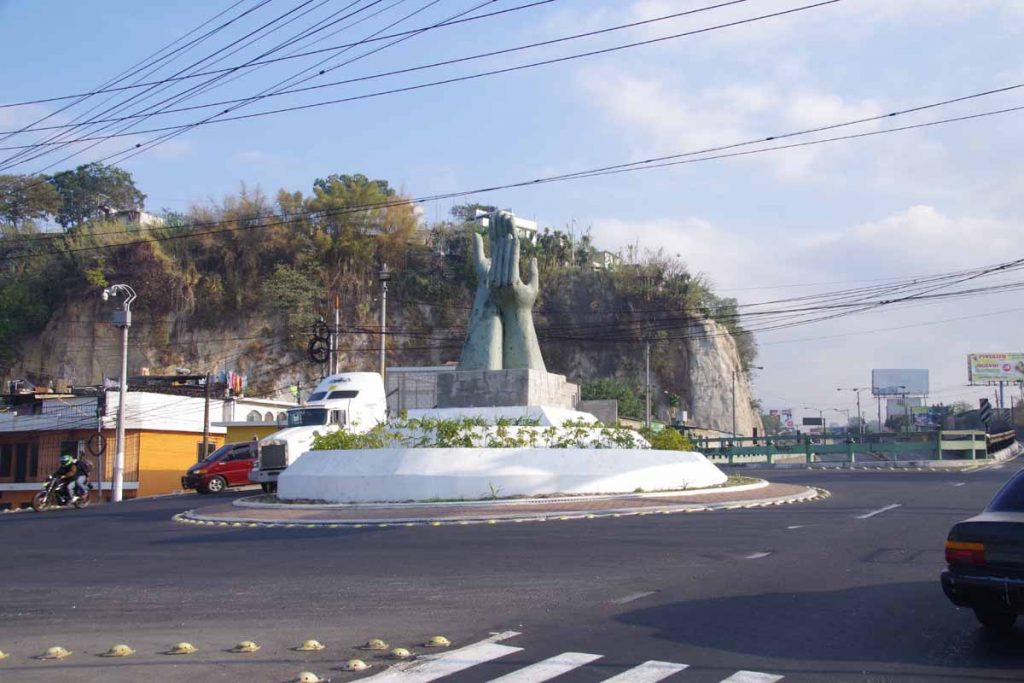 This morning we were on the road early. Partially to get out of the city before it became busy and partially since we expected a warm afternoon at lower elevations. Leaving Guatemala City was easier than entering. There was ~2km of city street riding that was slow because the lights weren’t timed for our speeds. After that ~2km of complete chaos with busy road sometimes narrowing to one lane, sometimes with buses stopped and a lot to watch. After that it gradually became easier and by the 10km mark, we even started to get a shoulder as part of 4 lane highway. 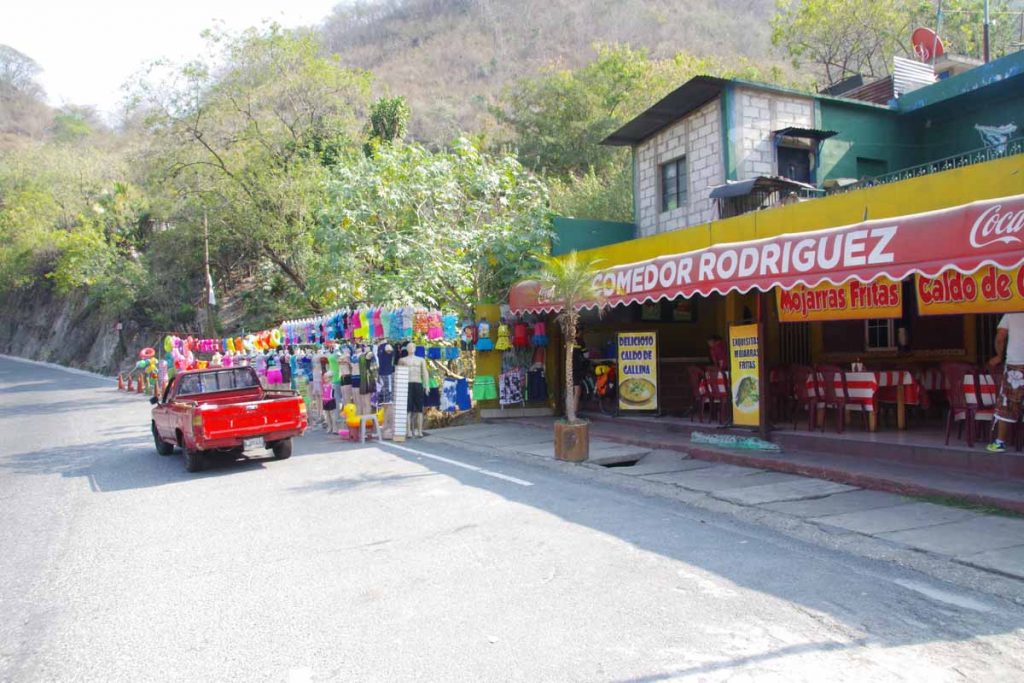 We started the day at ~1500m and descended steadily through the day, ending at ~550m with a little over a mile of total descent (~1637m). After the first 10km, we had another 20km of mostly descent before the road started having more mix of both climbs and descents. It also became steadily warmer with maximum of 36C (96.8F) recorded by my odometer. We stopped at 45km at a small comedor for lunch. 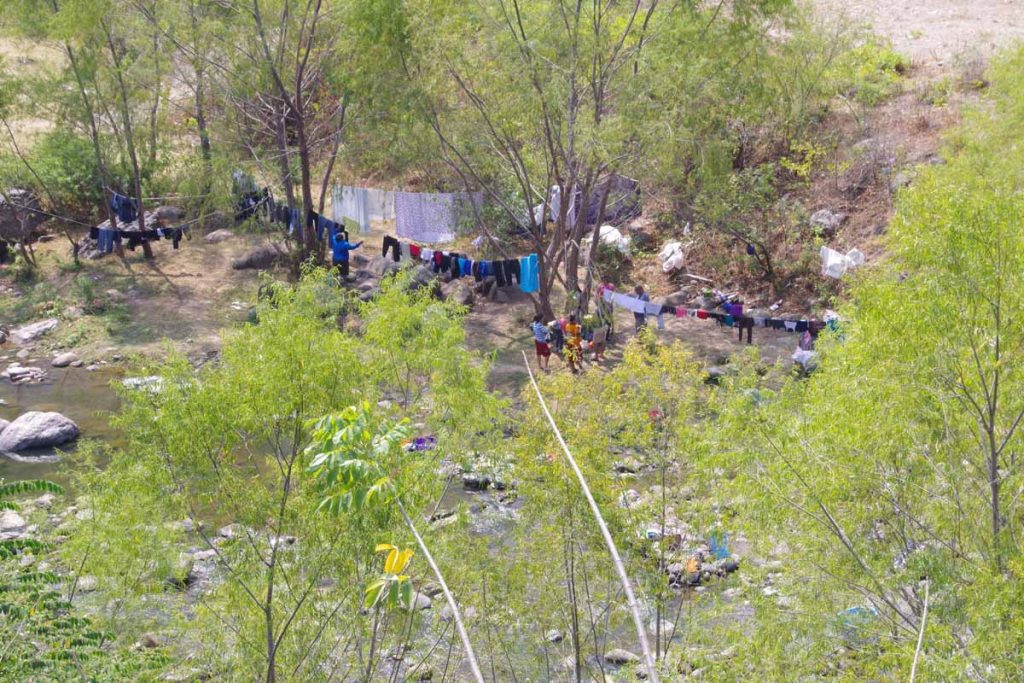 After lunch we crossed a river. People were down washing clothes and hanging them up.

After the river we started a slow steady climb. It was hot. A small breeze helped cool some of the sweat but we knew we were in for a hot afternoon. Coming the other way, a car stopped. A guy came out carrying two small bottles of cold bottled water. Wow!, just what we needed. We thanked him. He went back to his car and brought over two more bottles. Not sure how he knew, but this act of kindness certainly came at just the right time. 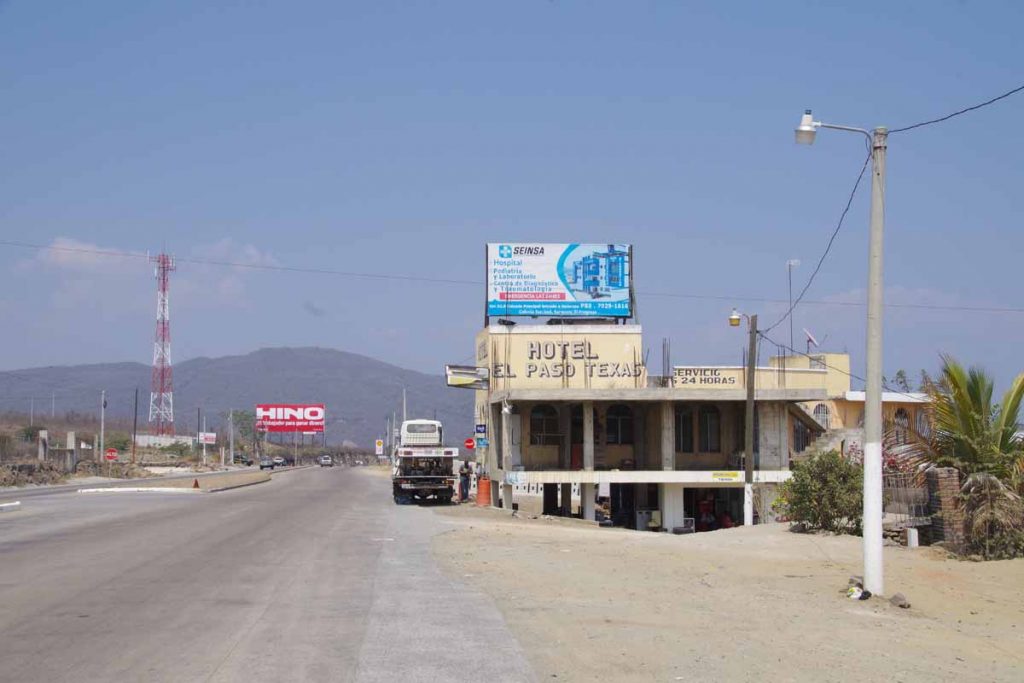 We got to top of the hill and just before the El Paso Texas hotel, our road angel came once more, this time with two cold cokes. Felt like almost too much and we thanked him again, though a cold coke also went down well. Overall, very appreciative of this hospitality and it came at exactly the right time. 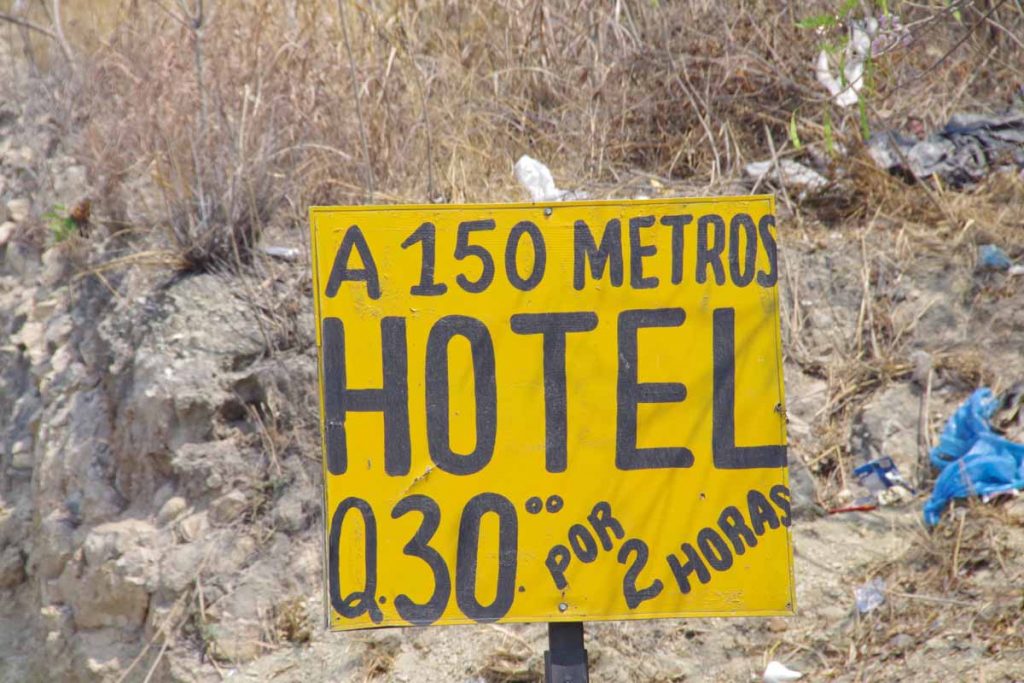 We cycled past several small auto hotels, including this sign that advertised hotel prices by the hour. 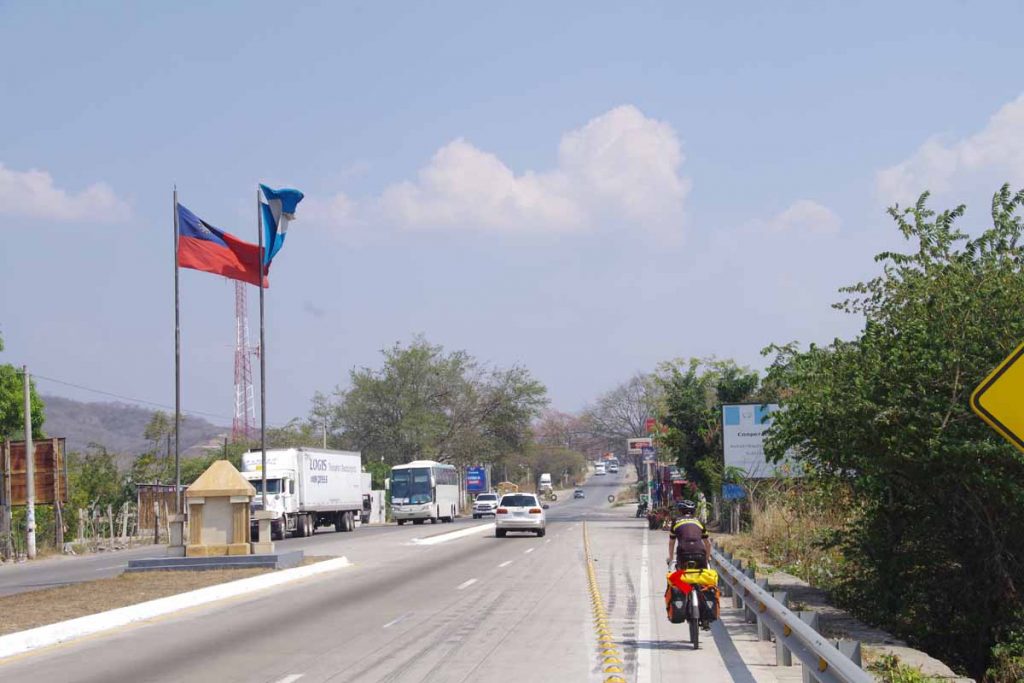 At 60km, our smooth road and wide shoulder was done. The flags of Taiwan and Guatemala flew together marking the fact that together the two countries had done the previous ~30km of road improvements. After this point, the road became much narrower and often fairly bumpy. Traffic was still moderately heavy and we had several long convoys of truck pass us. We stopped a few times to let these pass, particularly later when we had some steeper descents. 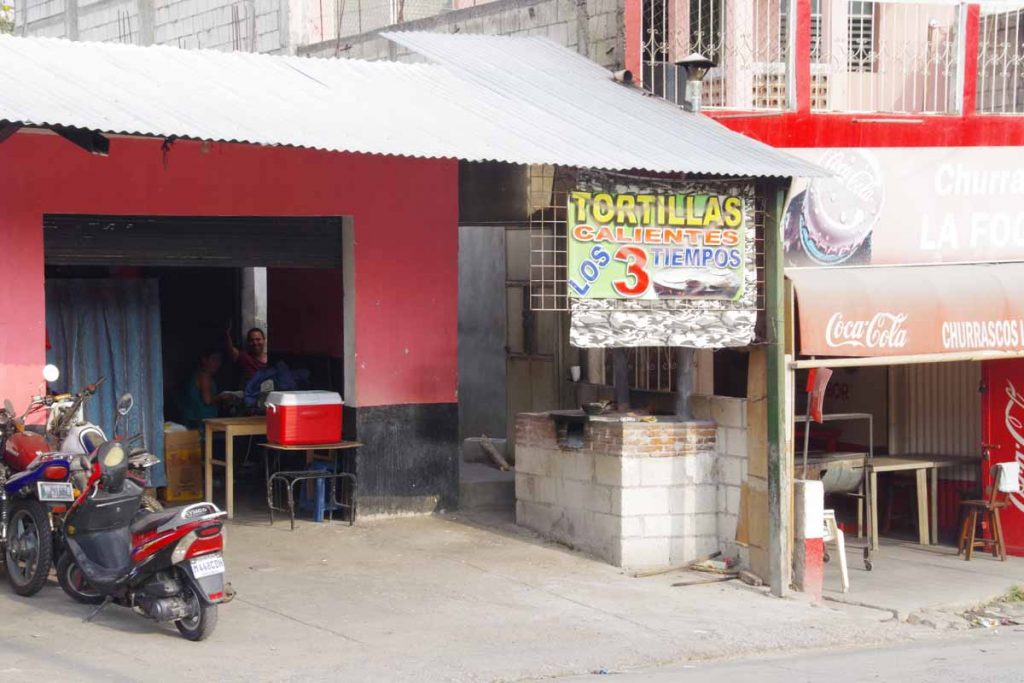 At 75km we came to town of Guastatoya, also known as on some maps as El Progreso. It was largest town around and gave us a good choice of hotels, so natural place to stop. After a nice cool shower, we walked around town to get some breakfast foods.

We see the sign above in Guatemala about tortillas “los 3 tiempos” or tortillas three times. As I understand it is tortillas fresh enough to eat three times a day – though not sure if the emphasis is on the freshness or on eating them for breakfast, lunch and dinner. 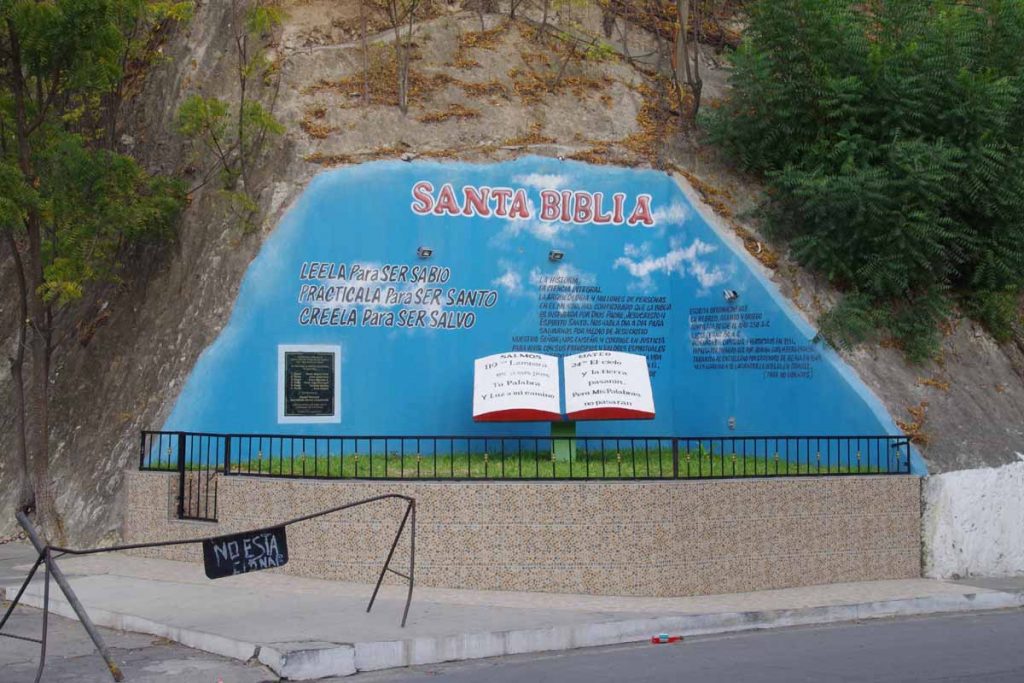 There was a display about bible reading. 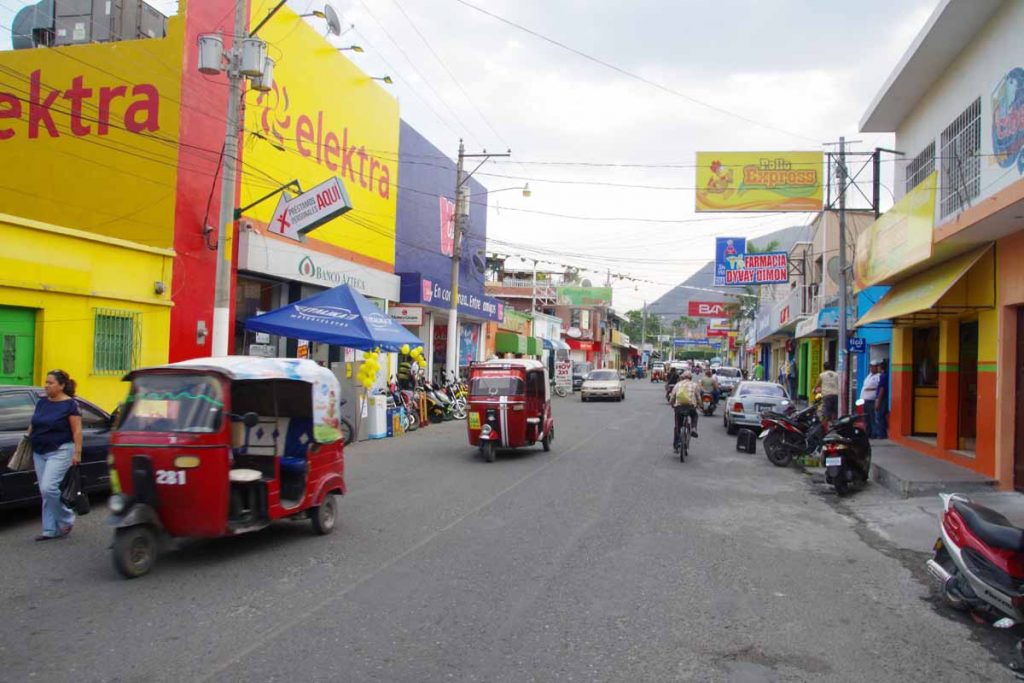 Downtown had some busy streets as well as a bakery, grocery store and convenience store we needed to buy food. 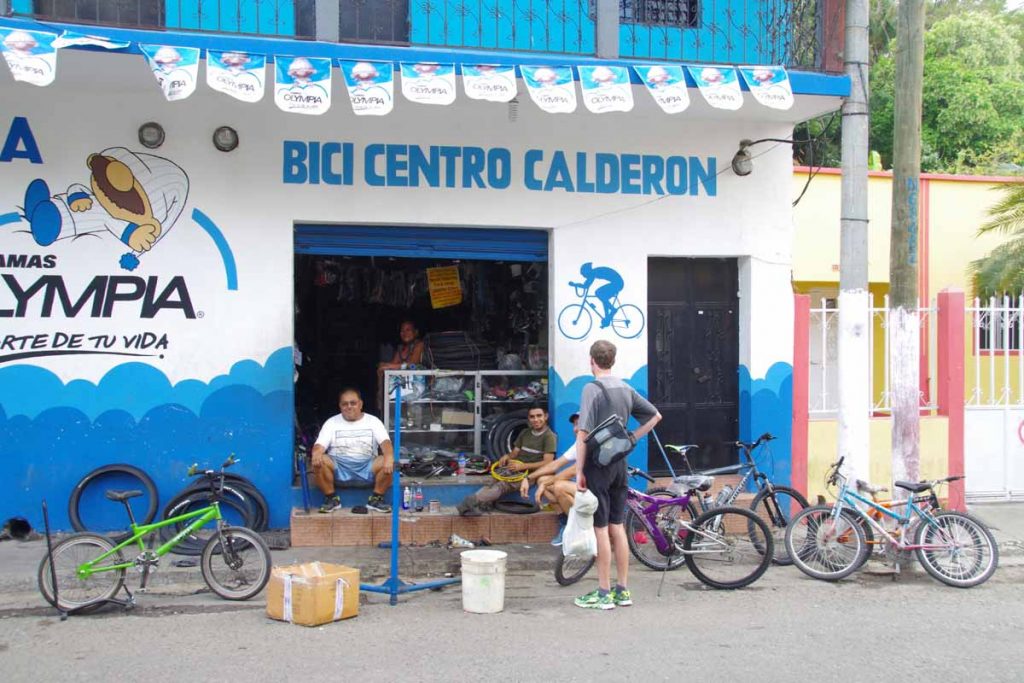 On the way back we happened past the local bike shop.

Overall, not too tough riding today with only ~750m of climbing and ~1600m+ of descent. It became hot in the afternoon, but our kind stranger also came at just the right time to help us climb a hot hill. We expect to remain at lower elevations next few days, so try to get out early as well.