It seemed like a good idea at the time and it turned out ok in the end. However, in-between there was a moment or two of “uh oh” and “that was stupid”.

However, best to start telling it from the beginning. 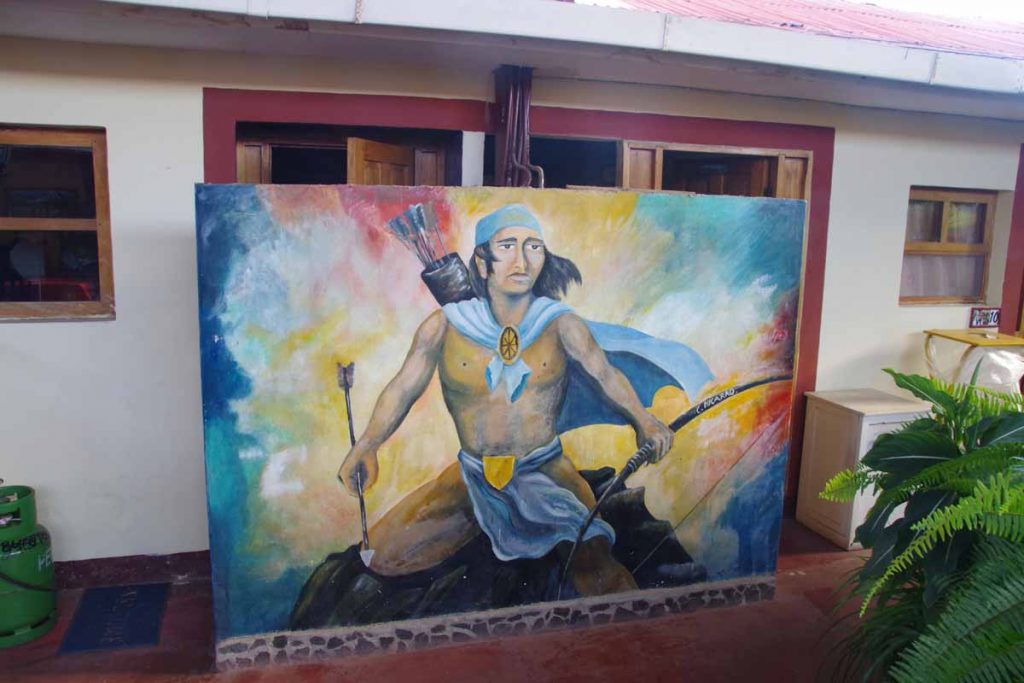 We expected a two-day ride to Lake Nicaragua. We’ve followed some blogs that have been detailed in noting locations of hotels. Both Masaya (155km) and Granada (170km) looked like nice places to stay. A hotel was listed in Sebaco (45km) but nothing after that – so good chance of a 110km gap between known hotels.

Not to worry, our plan was to get to at least Puertas Viejas (77km) or Las Maderas (99km) and then ask around, sleeping in tents if necessary. 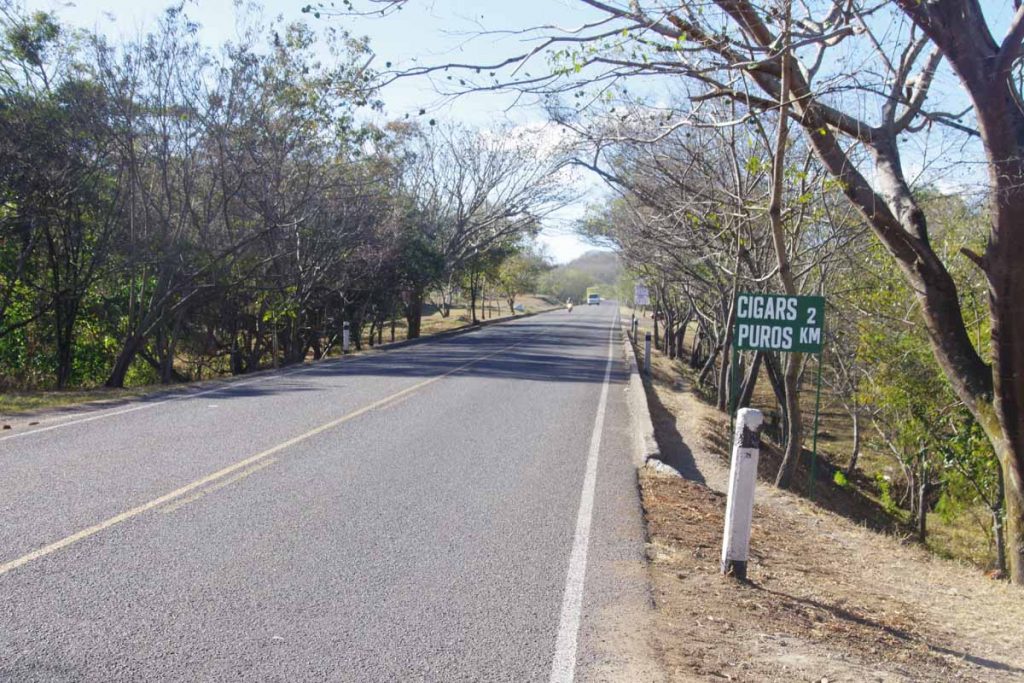 I was out first, taking advantage of the morning cool temperatures. Passed a cigar factory and store. Climbed to 1050m at 9.5km and after that mostly down. 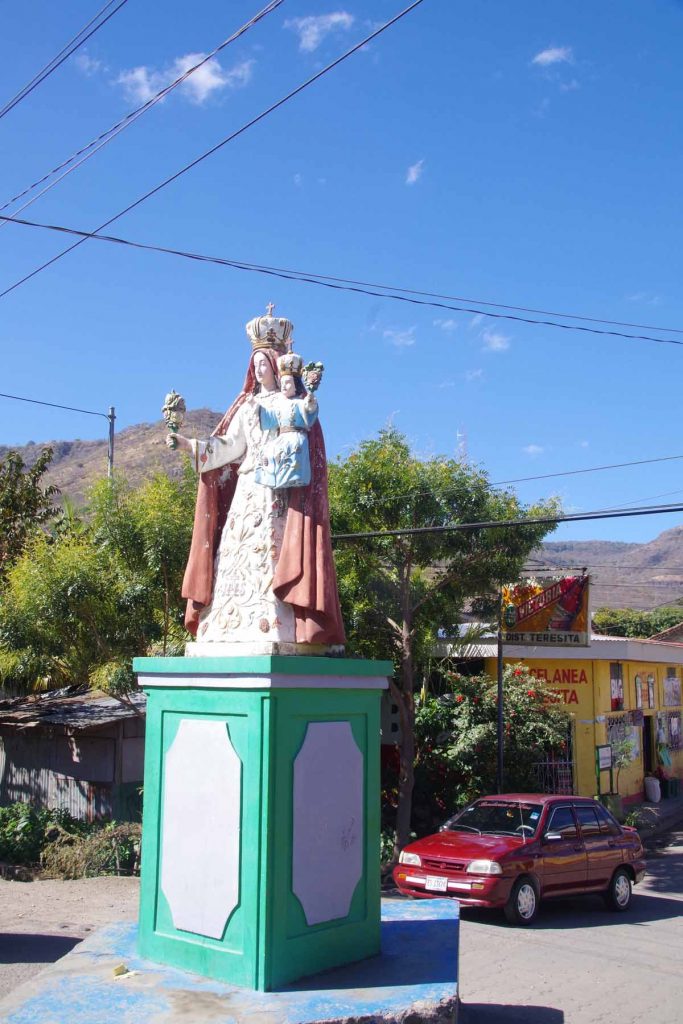 Statue at next town. 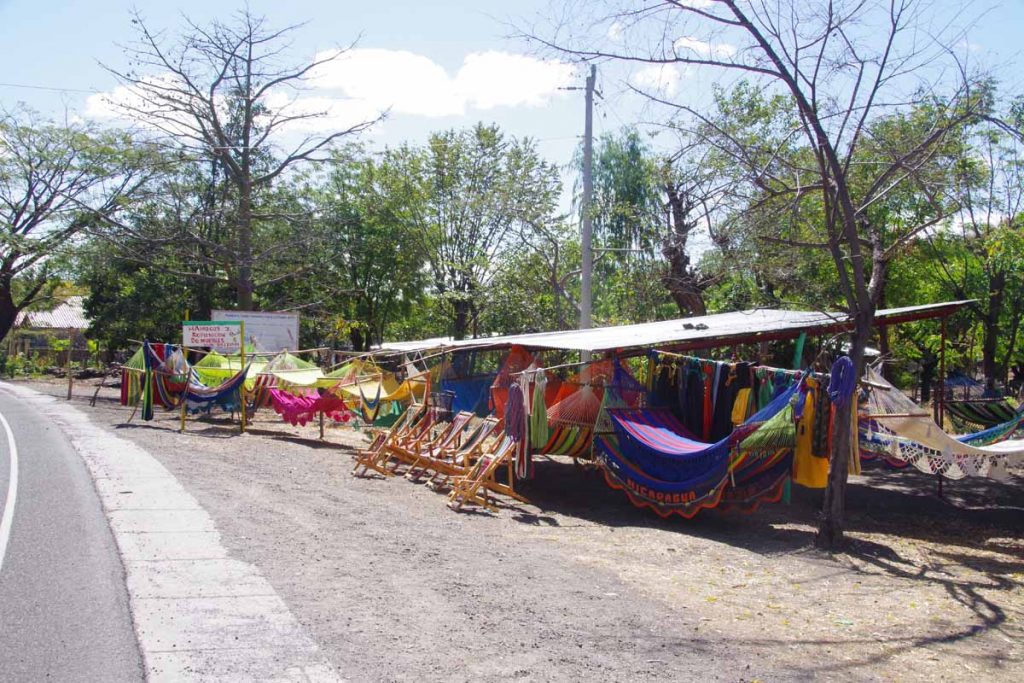 Near bottom of the hill, hammocks were for sale. 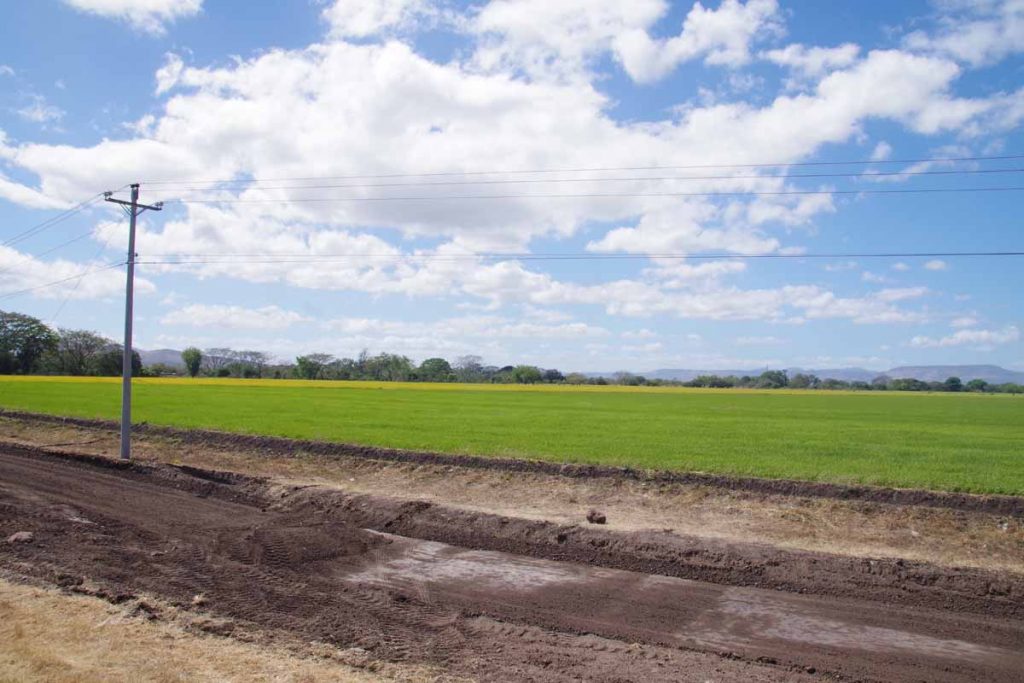 After this the land leveled out. However, also got a nice strong cross wind picking up. 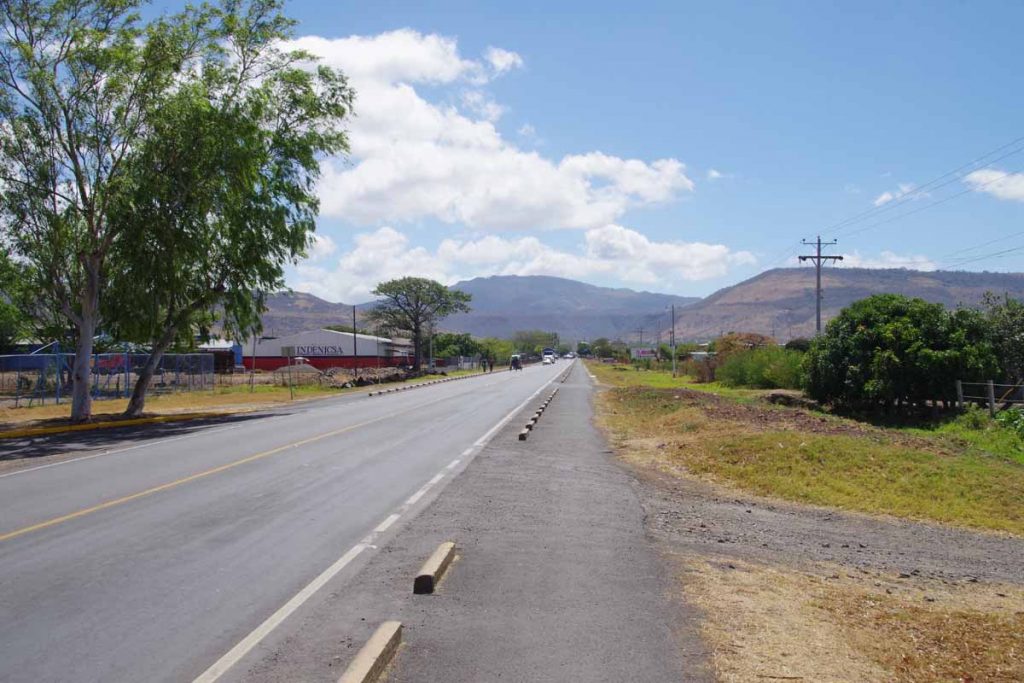 This bike path looked inviting but was rather bumpy.

Without too much trouble, made it to Sebaco where I waited for David. 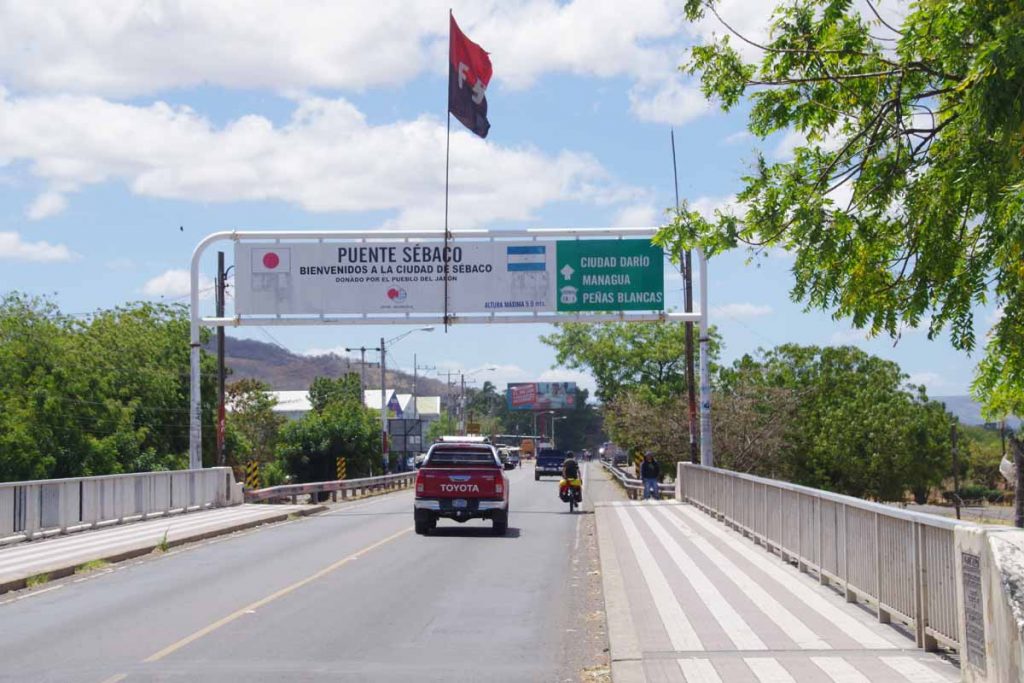 The road turned here and we had a nice tailwind for several kilometers. Notice the flag blowing our way.

Unfortunately, this didn’t last and it turned into more of a cross wind after that. Obnoxious because it was strong enough that trucks would pass, temporarily block the wind or send an extra blast. It took some extra effort to hold the bike straight and keep from wobbling off the road or into traffic.

We tried two places for lunch: first was too expensive, second didn’t really have lunch foods. After that settled for a third which was also expensive but looked best of the lot. The food wasn’t very filling and took a while before it was served.

However, only 22km to Puertas Viejas and we set off again. 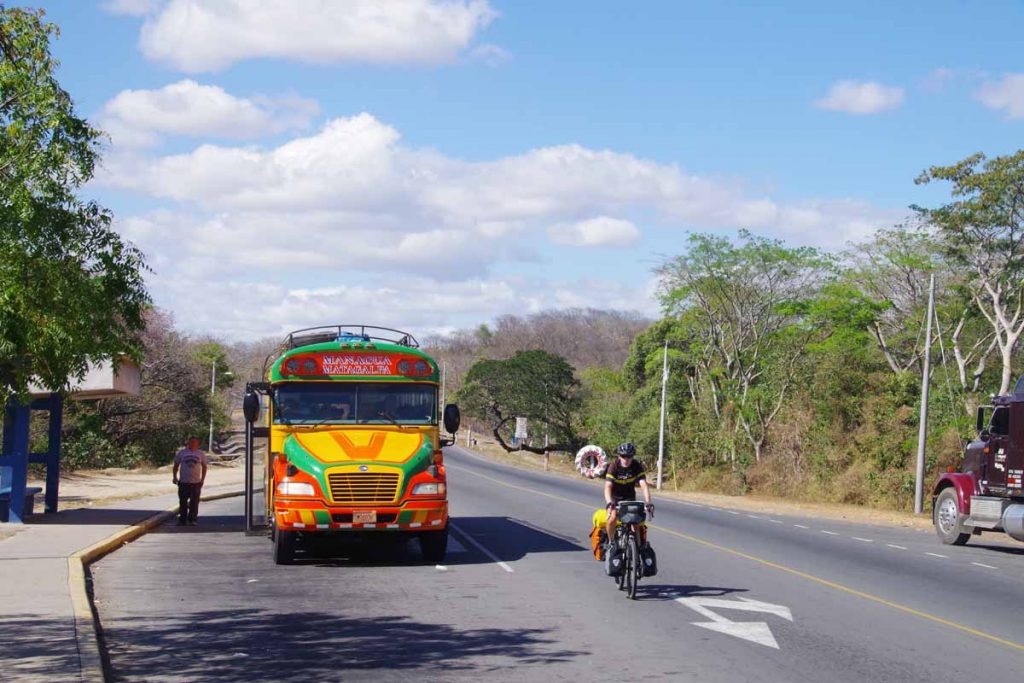 Buses are getting more colorful.

Without too much trouble, we made it to Puertas Viejas. Nice comedor here and we were able to have a proper late lunch. Here we also asked about accommodations.

Nothing in Puertas Viejas. A local truck driver also told us there was also nothing in Las Maderas, though he knew a hotel 8km further (total of 30km from where we were).

An idea entered our minds…what if got a lift in that empty truck? Seemed like a good idea at the time and the truck driver was friendly and willing. 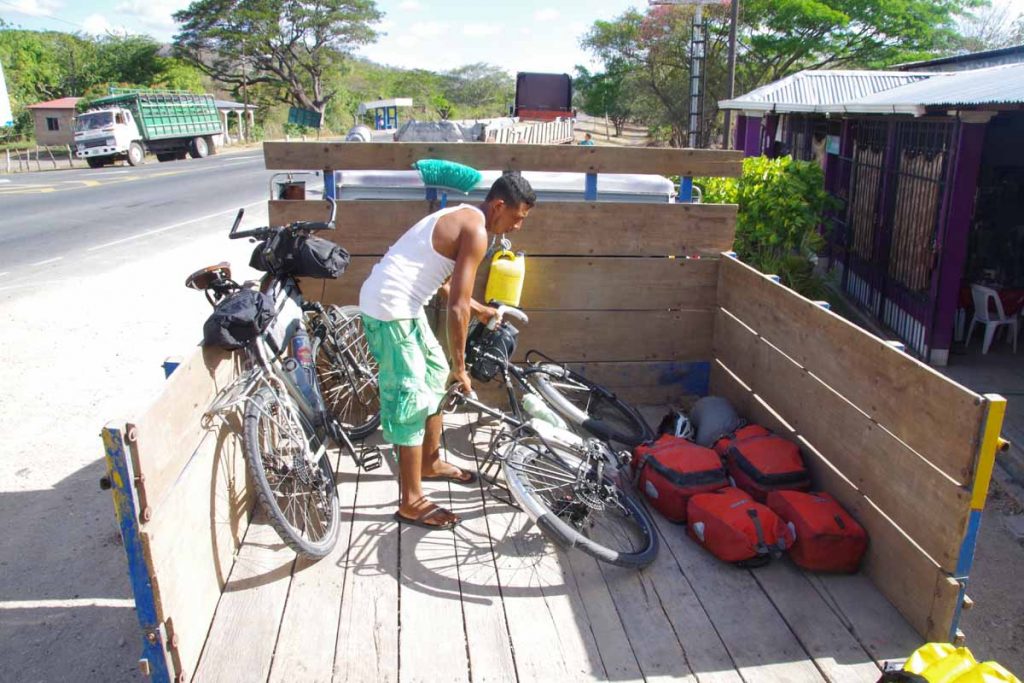 We waited until the driver and other passengers finished their meal.

However, before we knew it, there was a big rush to get the bikes loaded. Panniers off! Bikes up on the truck! Settle the bills! Oops, not enough change, so needed to pay that. 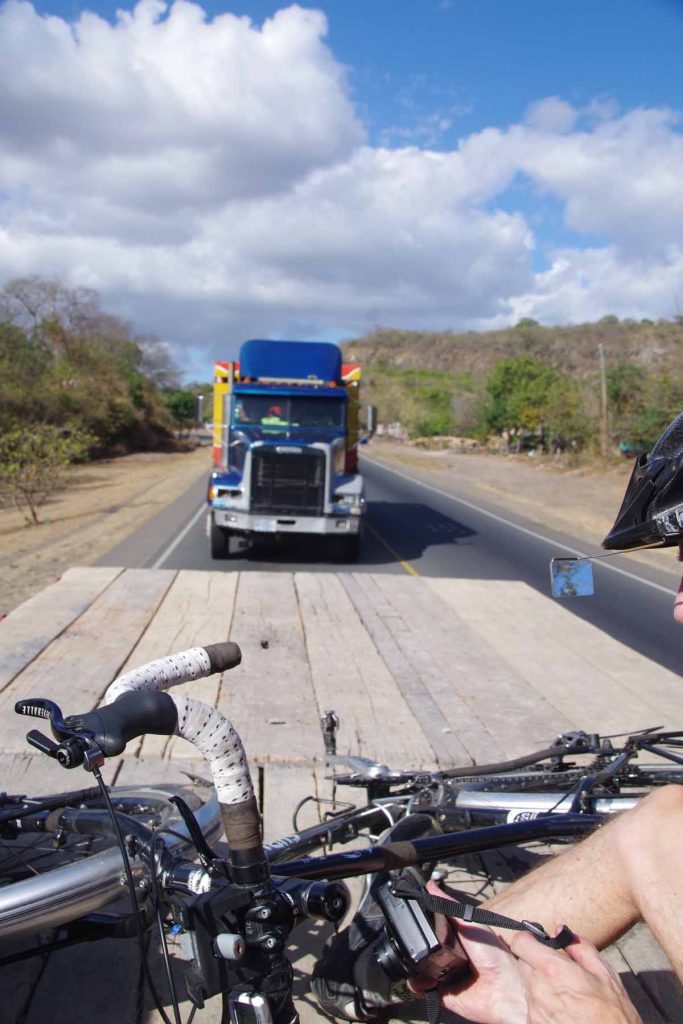 Very shortly later, this is the view we had from back of the truck.

We had gone just a few kilometers when I looked at the bags. Wait! Where was my camelbak? I normally have it on my back, but it wasn’t in the truck. Most likely it was still next to the table. In the rush to get ready, I had done all the other tasks but accidentally left it by the table.

We decided we’d continue our ride to the hotel, and then find a way to get back to the comedor again – hopefully it would still be there. 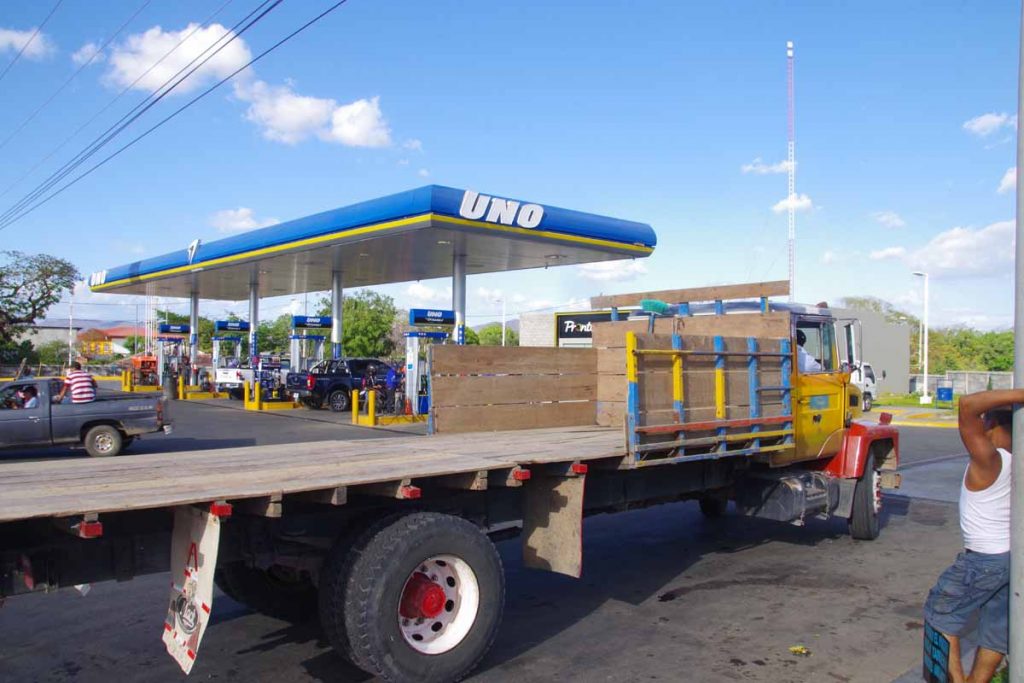 Truck stopped at San Benito. Actually 35km away not 30km. Now the problem was how to go back and retrieve the camelbak? David helped explain the situation and truck driver was involved in problem solving too. The driver called friends who might know numbers of women who worked at the comedor. Suddenly he spotted another friend filling gas.

Would they be willing to drive back, retrieve the camelbak? A plan was hatched and a price negotiated. David and the truck driver went with the friend, while I stayed back with the watching the bikes. 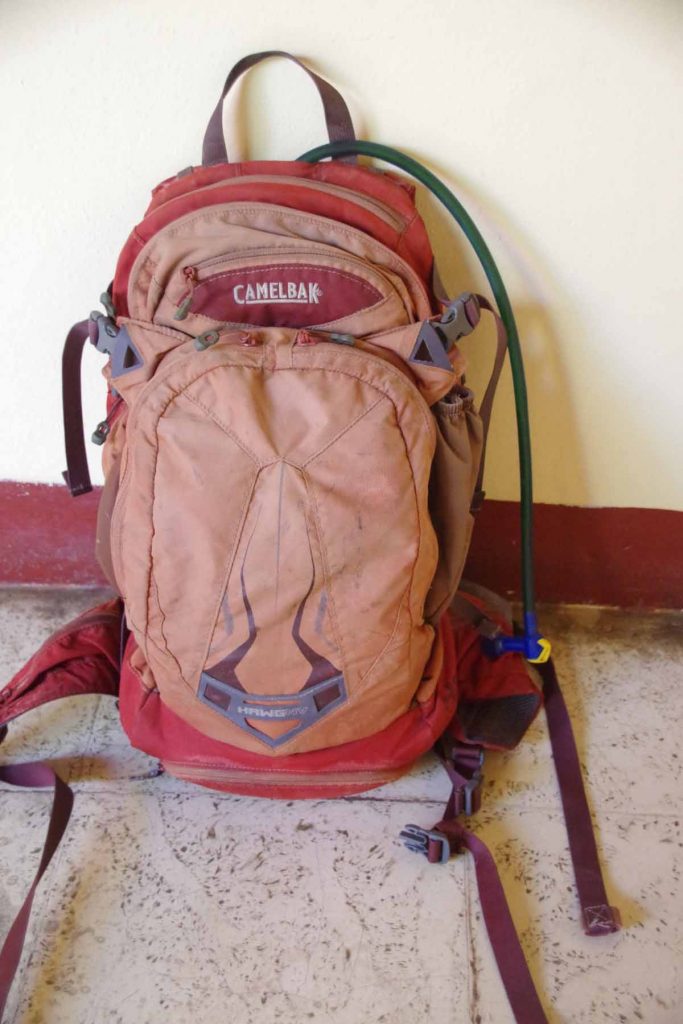 Long story short, 75 minutes later, they returned with camelbak safe and sound. Hooray! And a big relief. It was now almost dark. The hotel the driver knew, was actually closed but locals directed us to a place 2km away. It was getting dark so we went very slowly along the shoulder, watching the mirrors. Long day and glad everything turned out ok in the end. Next time try not to get so rushed.
Day Two
A shorter second day riding to Granada. 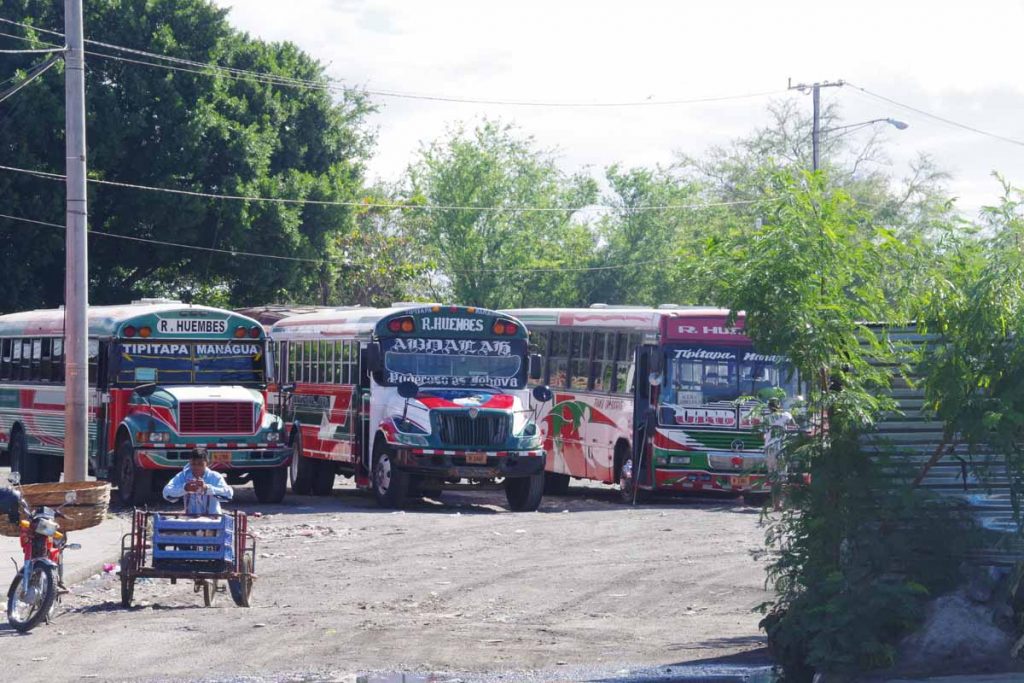 A big question for today was, “what would the wind do?” Nicaragua has winds known as the Papagayo Jet, which can be strong. Next few days were forecast at 30km to 50km from NNE. Mostly a cross wind, but a lot more obnoxious if also a head wind. Fortunately, enough vegetation today that we noticed wind, but not as strong as could have been (or as strong as winds in Mexico).

Above were buses at Tipitapa. We turned off the main road here. Stopped at supermarket (Pali) for some food before riding smaller roads. 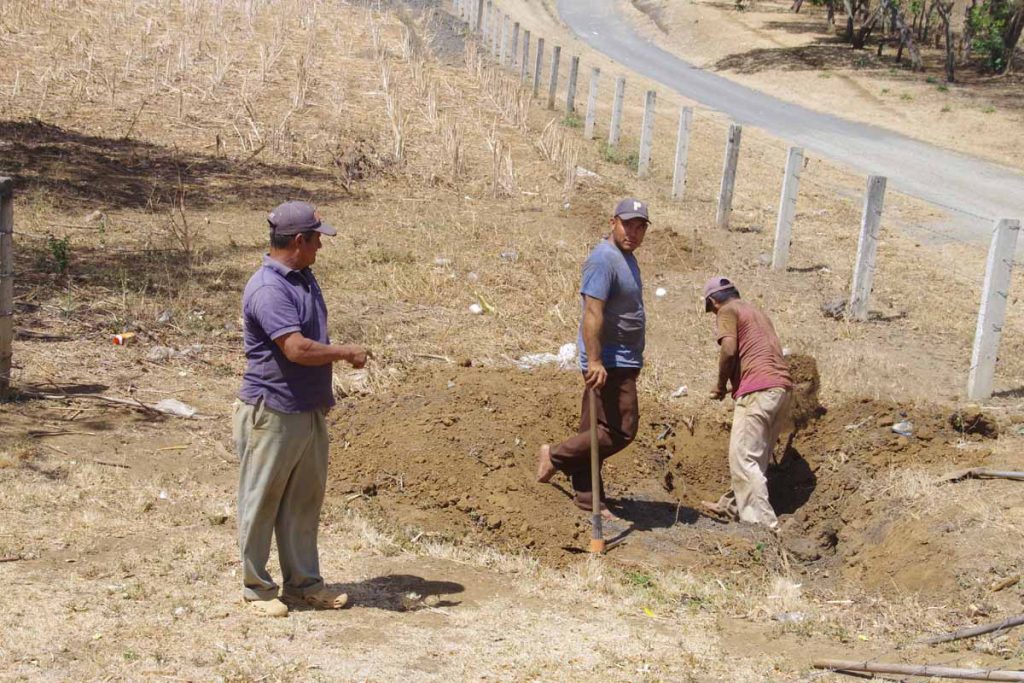 These guys working along the way. 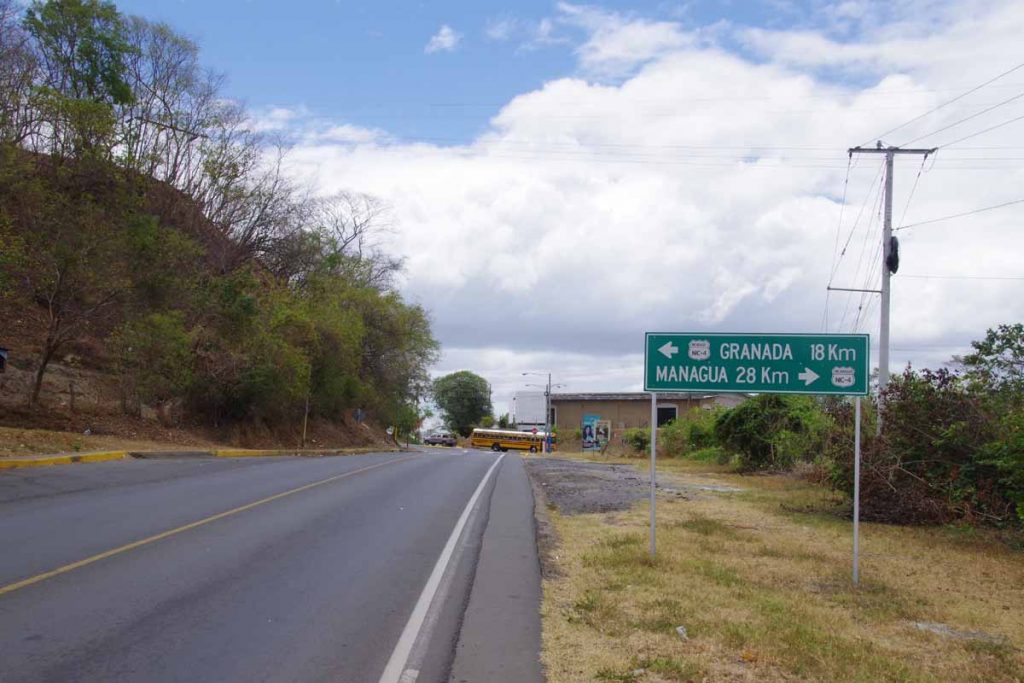 At Masaya, road junction between Managua and Granada. 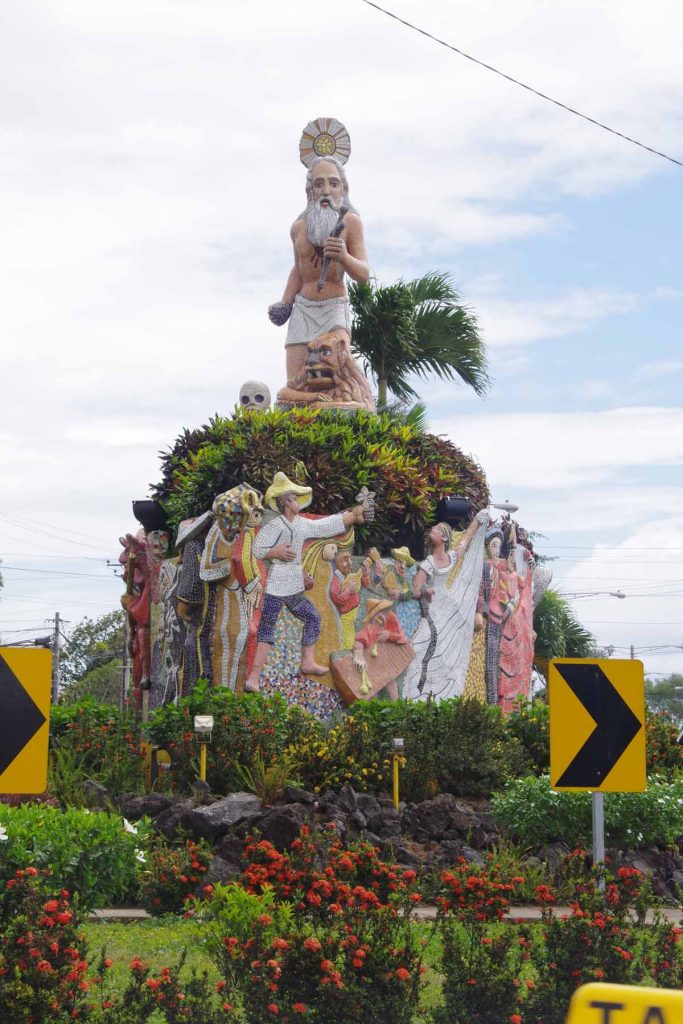 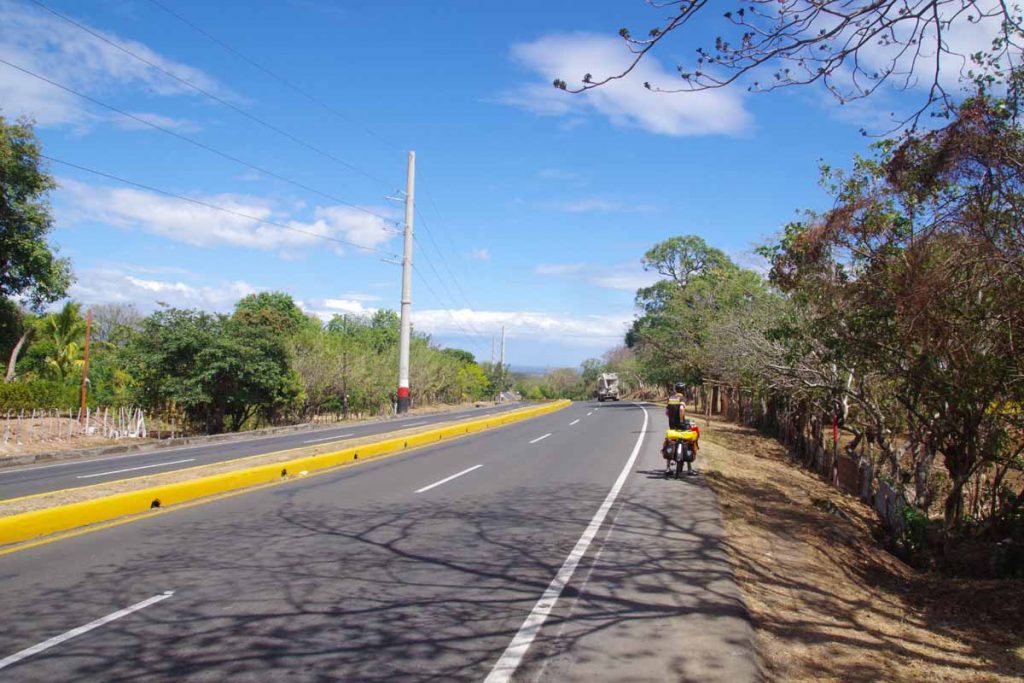 Nice road from there into Granada. 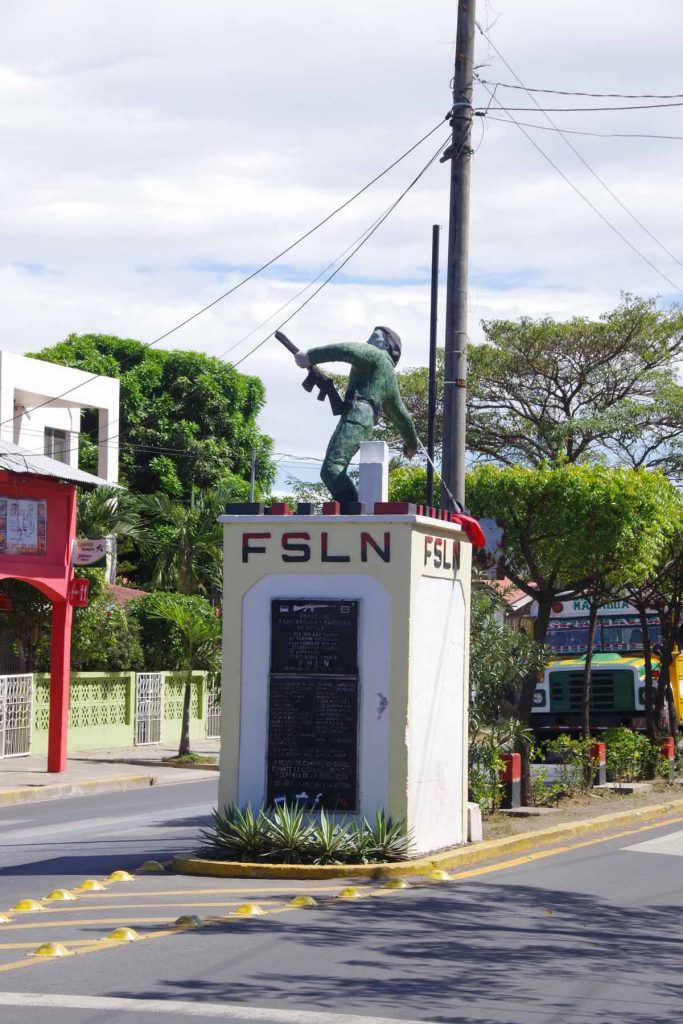 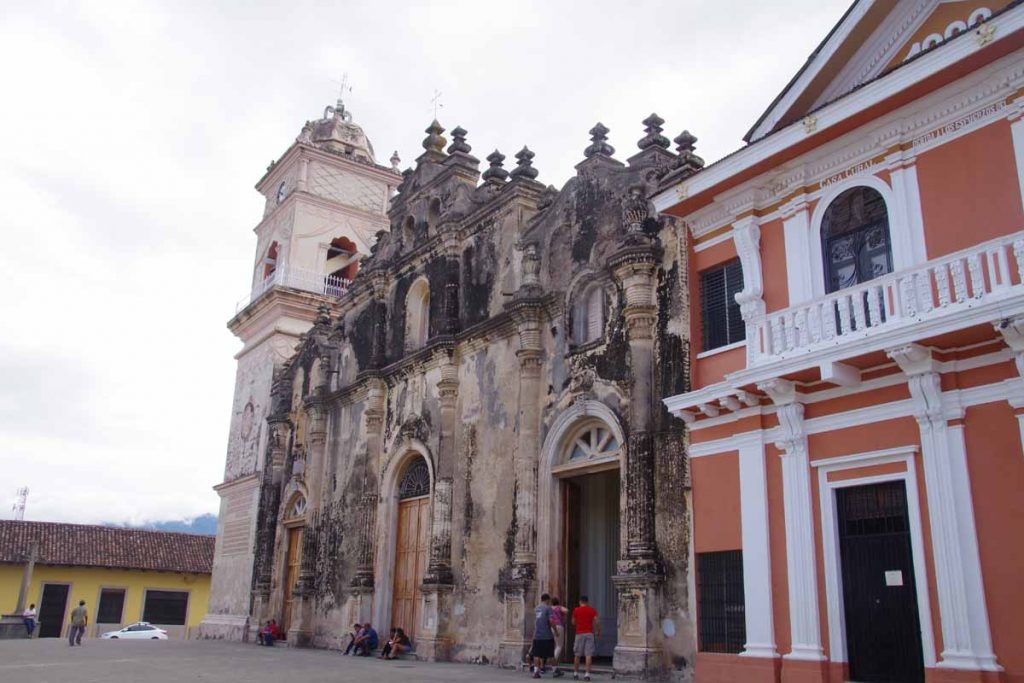 Many old architectural buildings here in Granada. Also many small hotels and a lot of foreign tourists. Found a spot downtown and now have a chance to explore the city.