Pleasant ride in lowlands of Colombia. Road was flatter, but a little worse condition and also busier. Caucasia was surprisingly large town, with a lot of motorcycles. 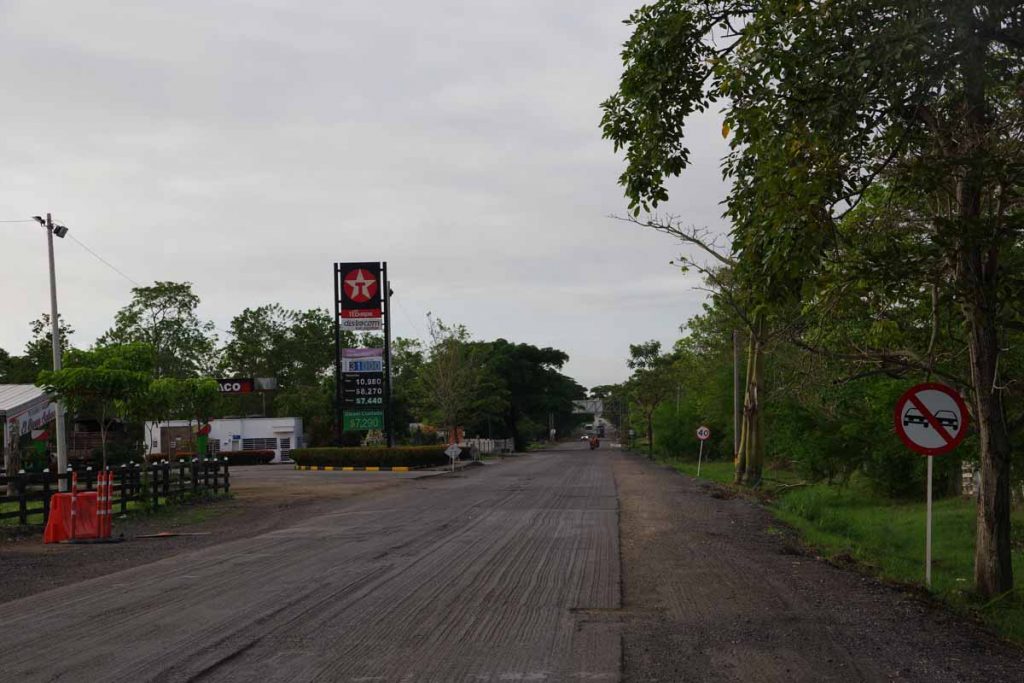 Planeta Rica was nice little town and my hotel was nice and close to the town square. Also had a supermarket nearby to stock up for some breakfast items to eat before departing. The first part of the ride the road was sometimes rough grooved pavement as well as a few spots with road construction. As seen on sign above, either gasoline is expensive here (per liter) or much more likely, this is second Latin American country that sells by the gallon. Guatemala was the first country and others (Mexico, Honduras, Nicaragua, Costa Rica and Panama) all by the liter. 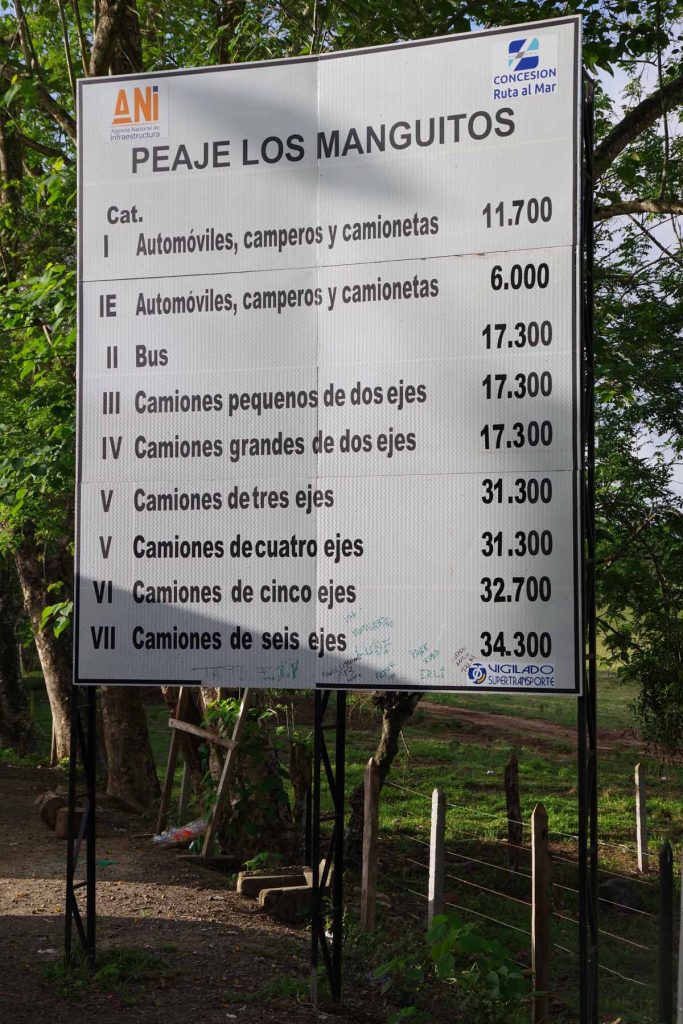 At 14km there was a toll booth. Instead of having special toll roads, Colombia seems to have these toll booths on major highways I’ve been on. There are ~2850 pesos per dollar so costs a car either $2 or $4 for a toll. 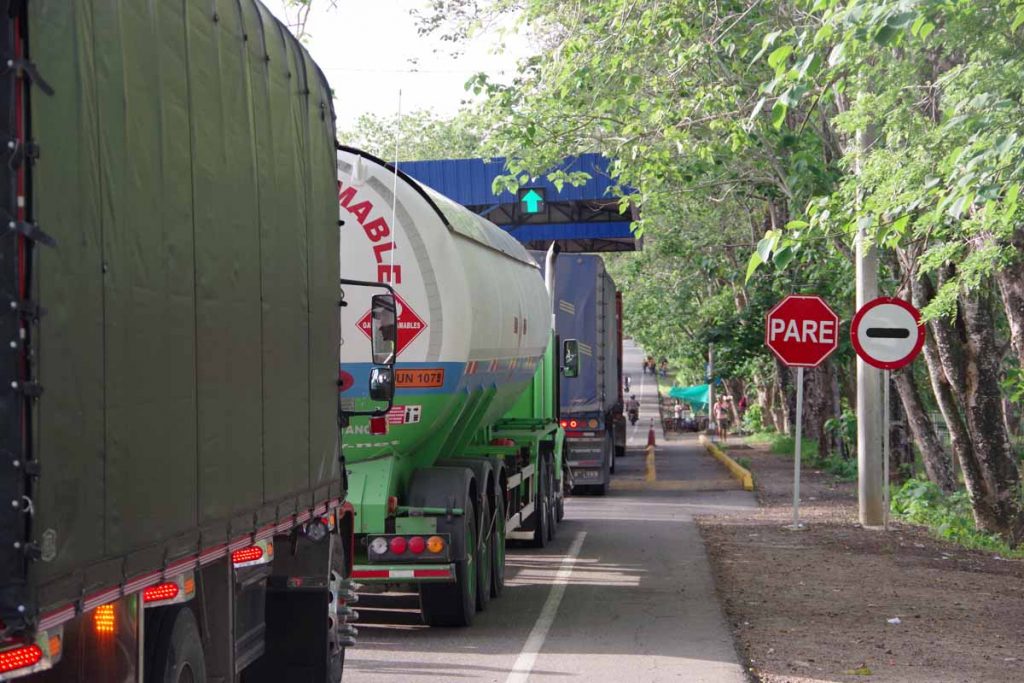 Motorcycles are free on that special right lane beside the trucks. Bicycles also travel on that lane. 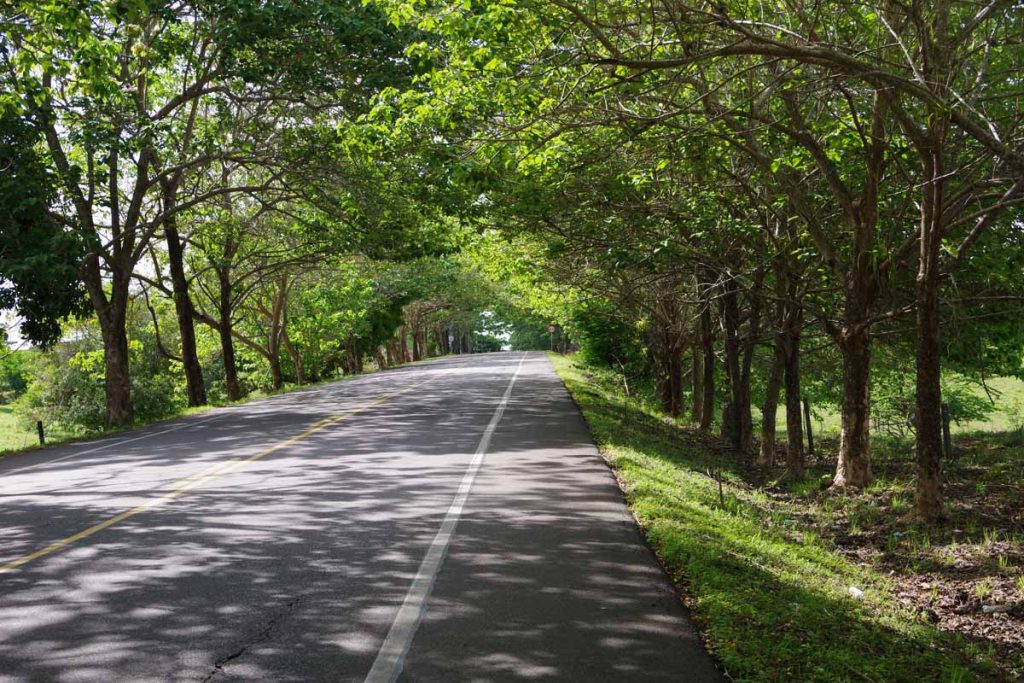 Some pleasant riding through the countryside. 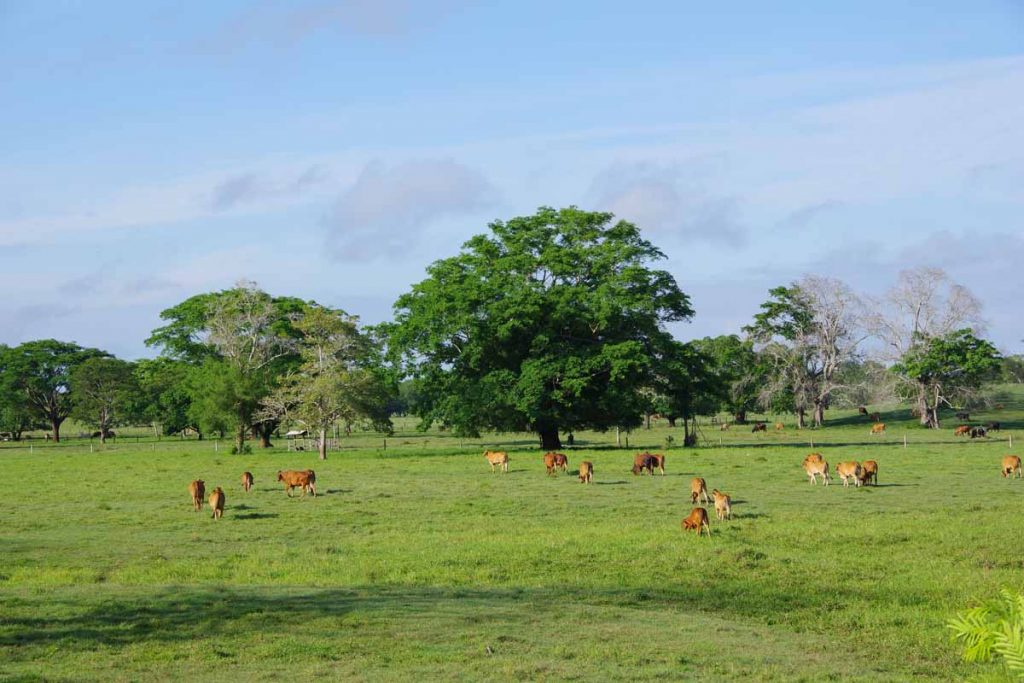 I’ve been passing a number of large ranches or finacs. Even saw a cowboy on horse trying to herd some of these cattle.

At 24km, the town of Buenavista had a nice town center on the main road. Stopped here for a snack and short break. 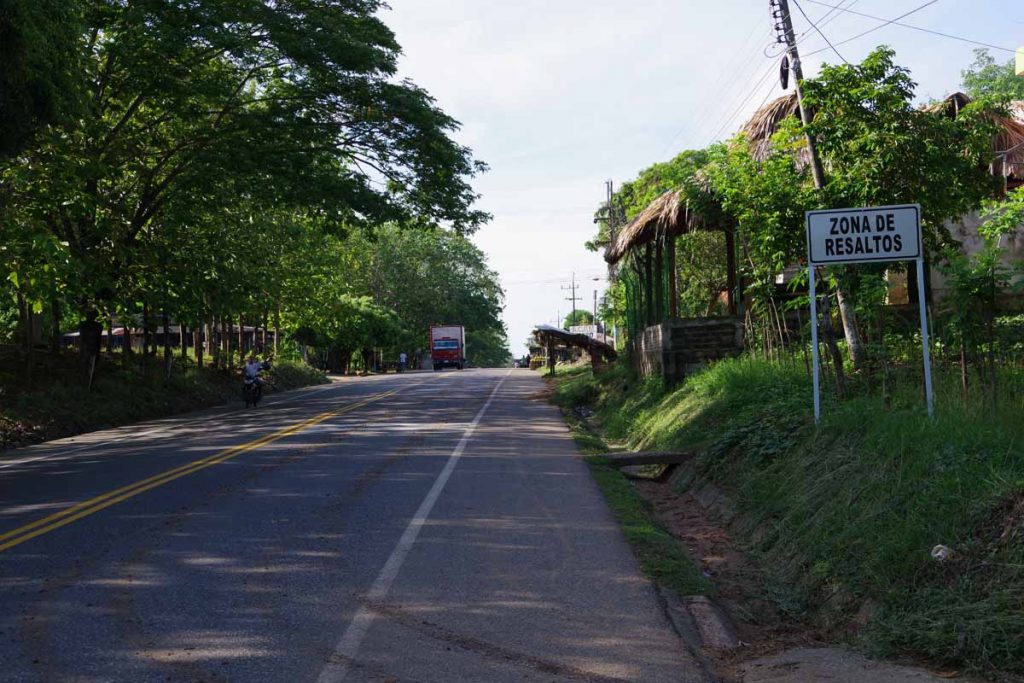 In Mexico, speed bumps were “tope”. In Guatamala, this became “tomulus”. Here the signs warn of “zona de resaltos”. Wonder how many further variations I will have going south. 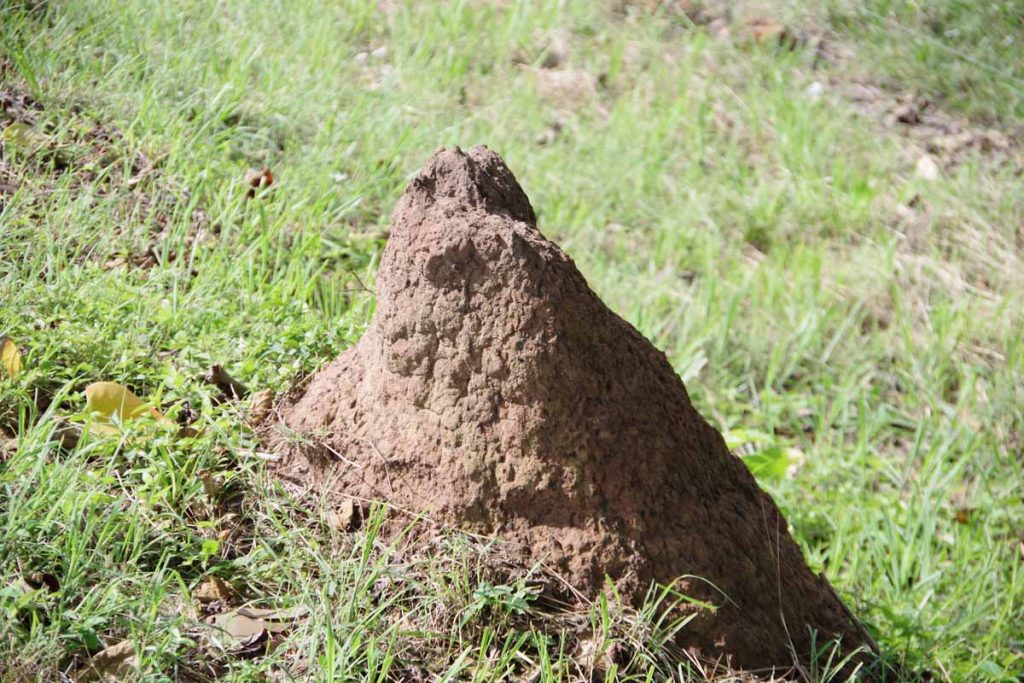 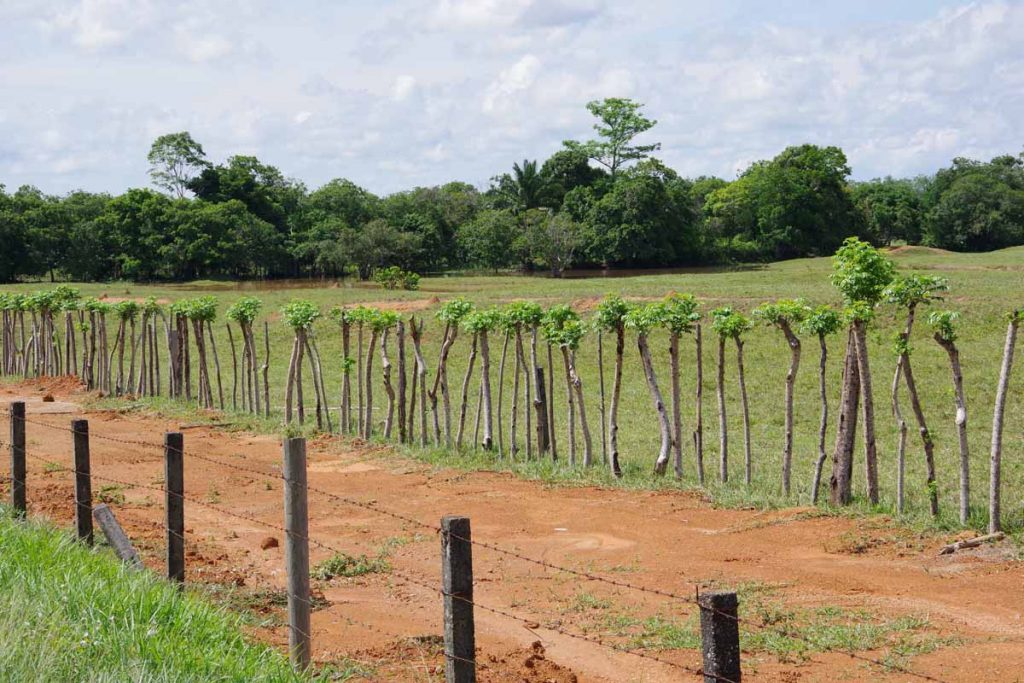 That fence seems to be made of living trees each sprouting a little bit. 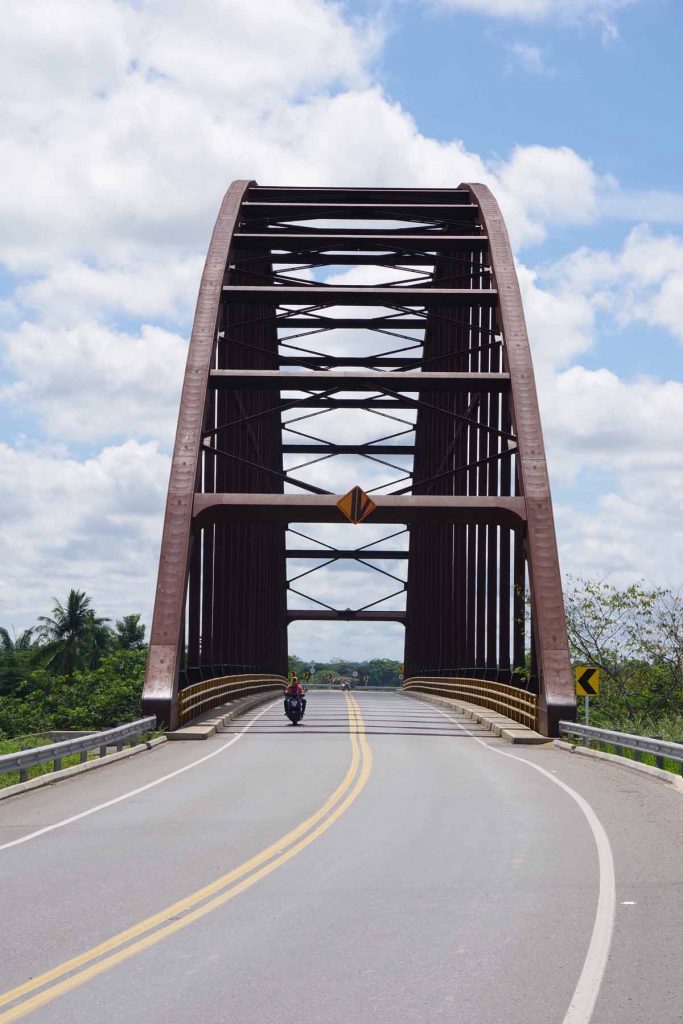 Large bridge over the San Jorge river. Today the route was flatter than yesterday, though still a few rolling hills to climb over. 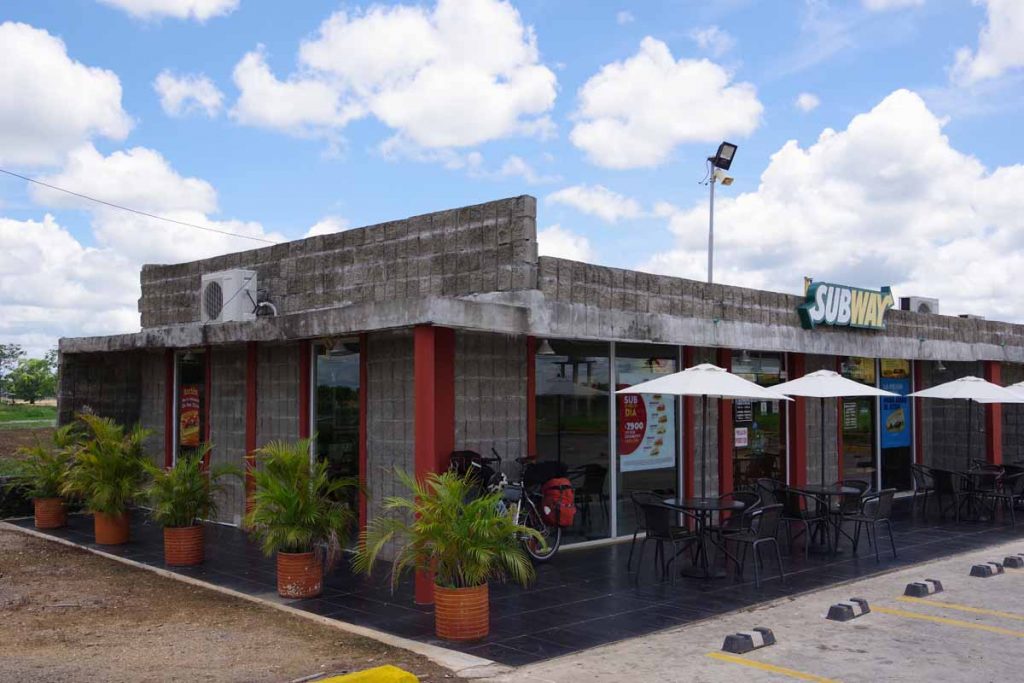 At 48km, a pleasant surprise. Gas stations here usually don’t have much else or perhaps a hotel and restaurant. However, this was first one I saw with a Subway. Prices were similar to US prices and hence rather expensive for Colombia. However, inside was air conditioning, so nice chance to cool down a bit before cycling the last 20km.

Caucasia was a busy town. I had a hotel in mind from previous blog, but looked like it was closed for renovation. So continued on main road and just south of town, found a reasonable hotel. My route will now follow the Cauca River just slightly uphill for the next 100km before starting a sharp ascent up and over the first set of mountains – as well as expected cooler temperatures that come with elevation.

I’m now at 8 degrees north latitude and hence same as my southernmost point in Panama.