Toto, we’re not in Kansas anymore…

While the lowlands I cycled the first week aren’t exactly like Kansas either, my last cycling day and a half is markedly different as I’ve climbed up into the mountains. Today, I heard for first time, “the hot water is on the left”. Previously, there was only one temperature and I was happy when it was cool.
Day One
Left the lowlands today and started climbing. Temperature starting out today (~22C, 71F) was similar to temperature in middle of day at elevation (~25C, 77F) though it did get warmer in between. 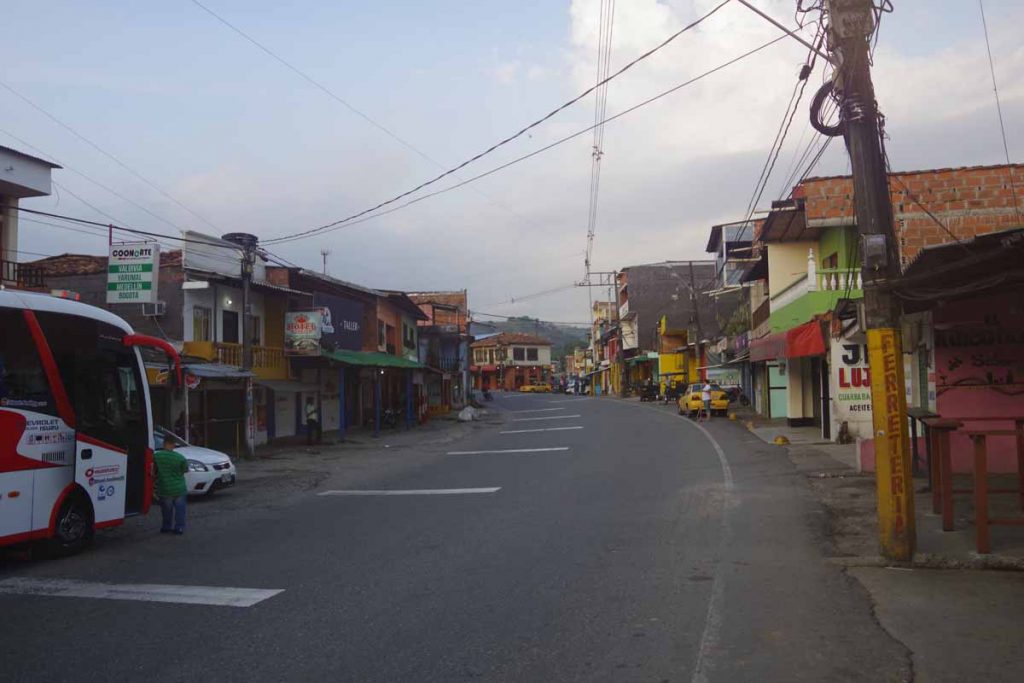 Started early and came through Taraza town when all was still quiet. The first 43km were mostly flat as I followed the Cacua River. 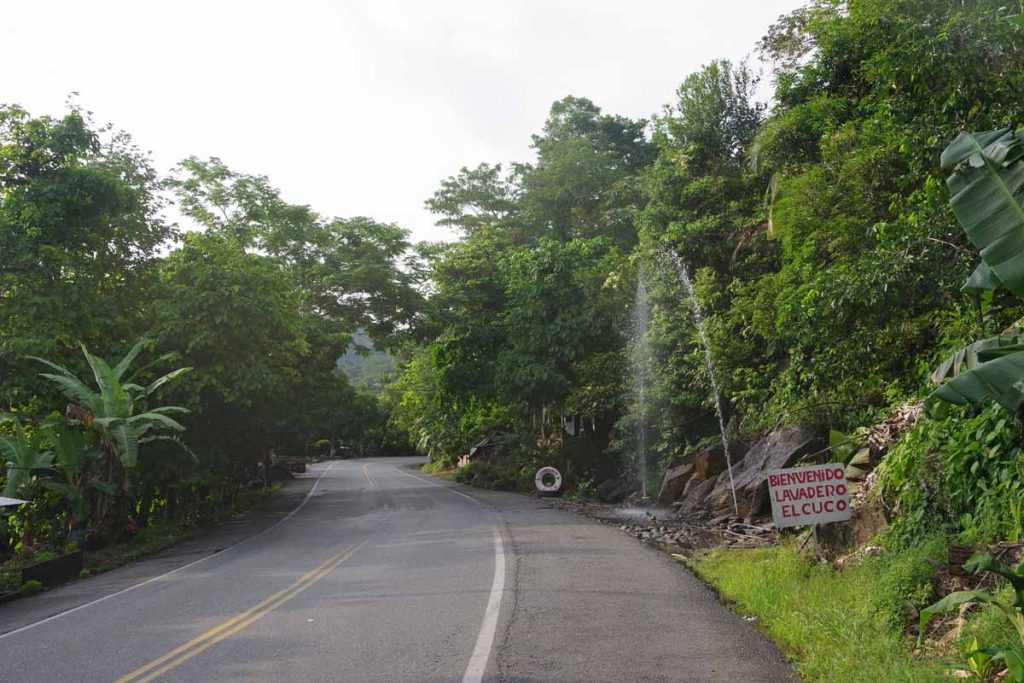 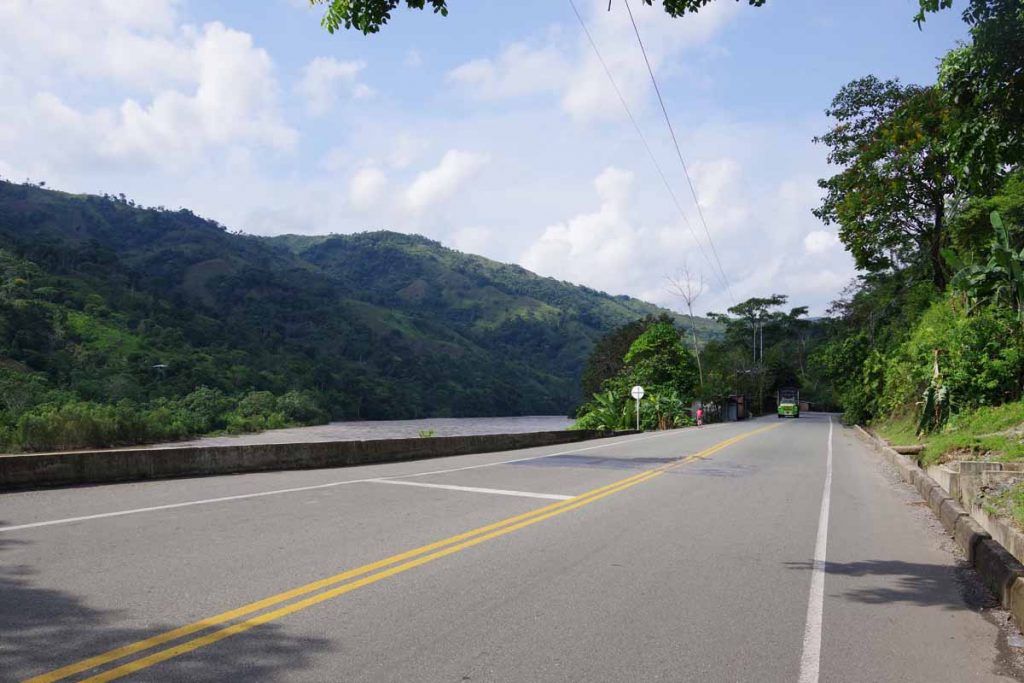 The river was large and a brownish color. Slowly started going into a steeper valley. 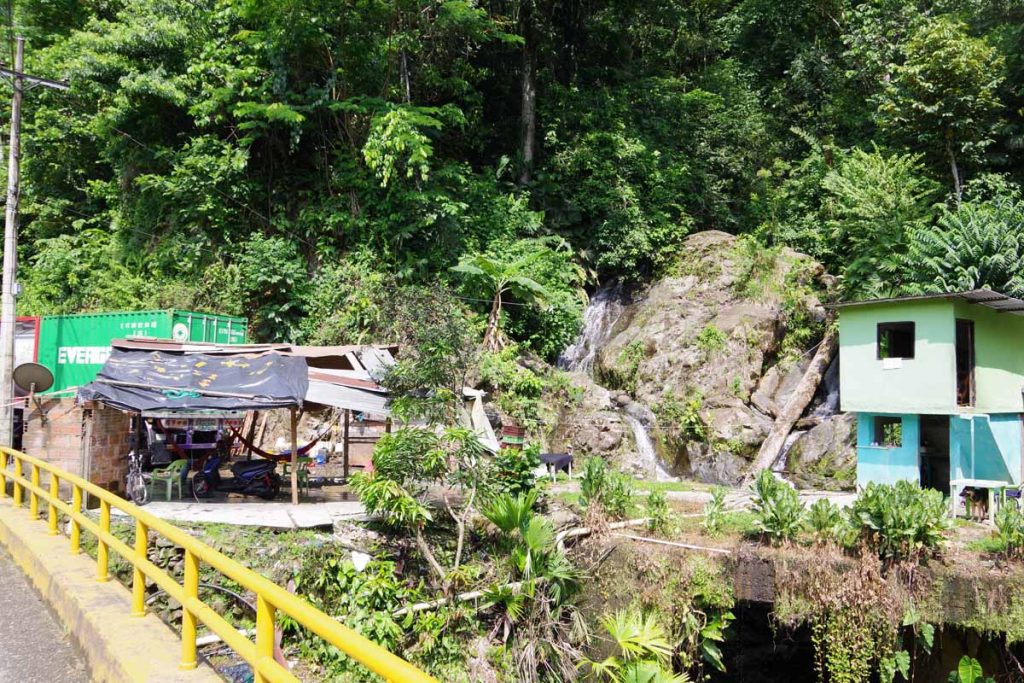 A lot of these little creeks along the way with rushing water. 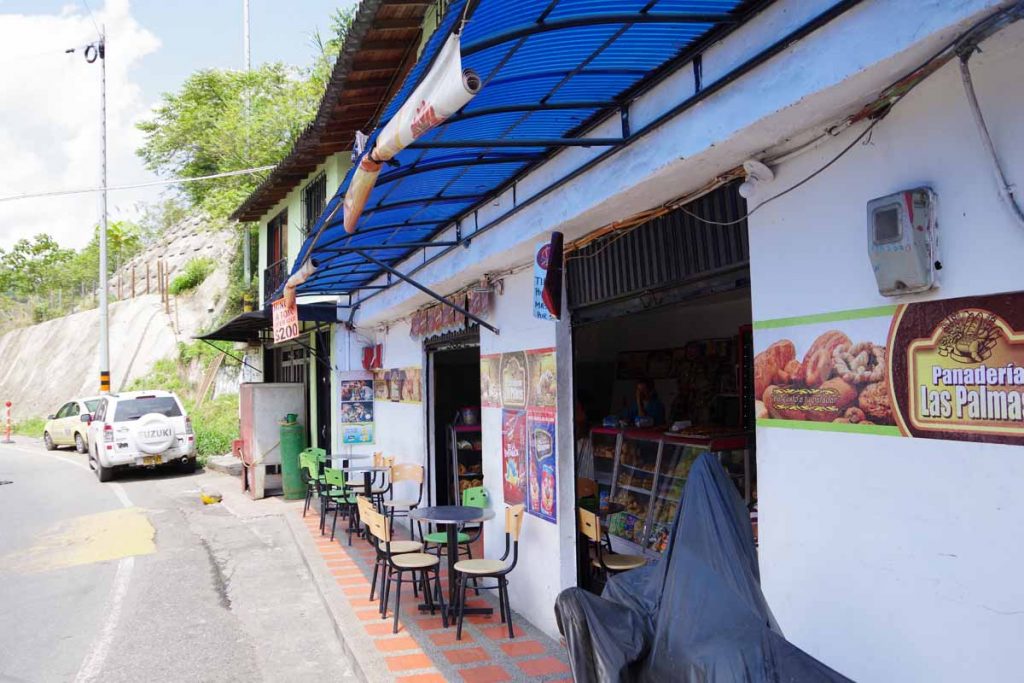 There was a little bakery here to get a bite to eat and fuel for the climb. 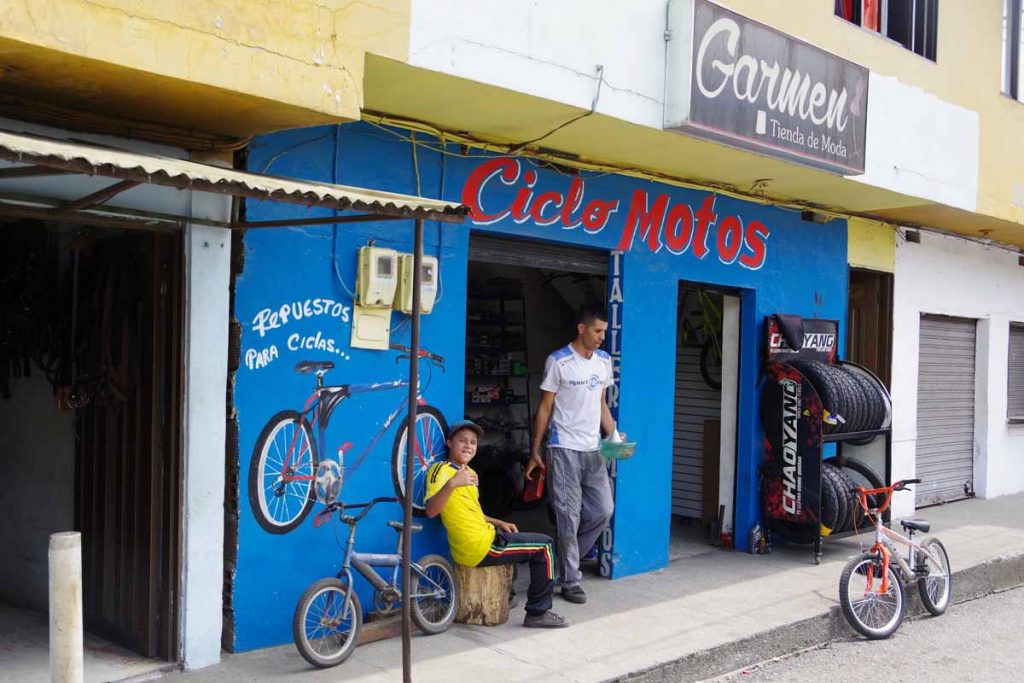 There was a nice bike shop. I saw perhaps 15 recreational riders out today, most with cycling gear and helmets. 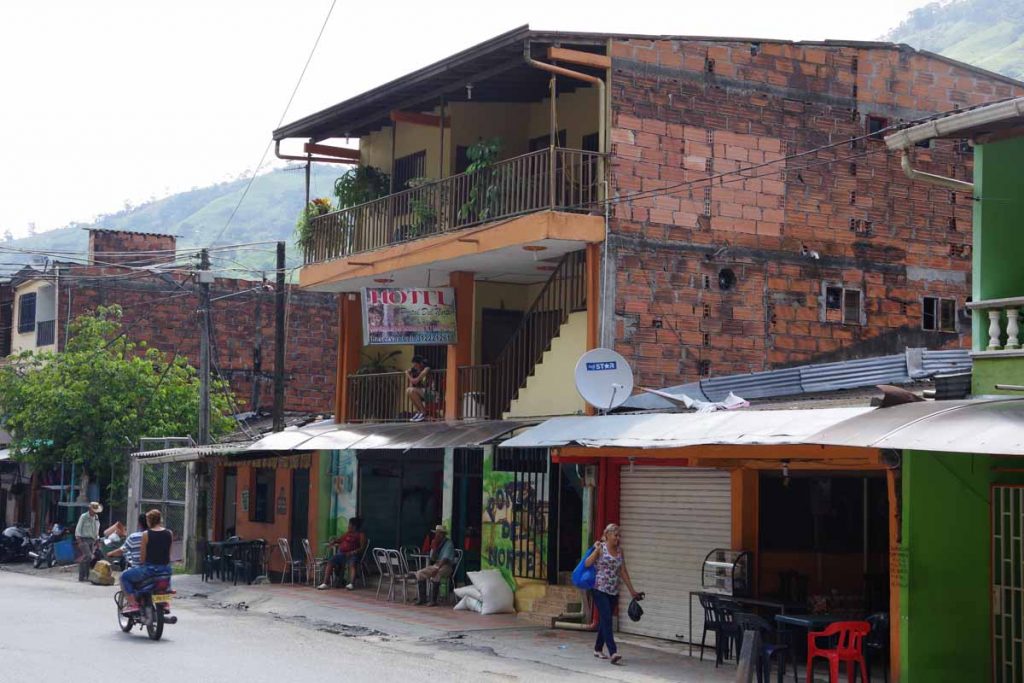 A small hotel across the street. 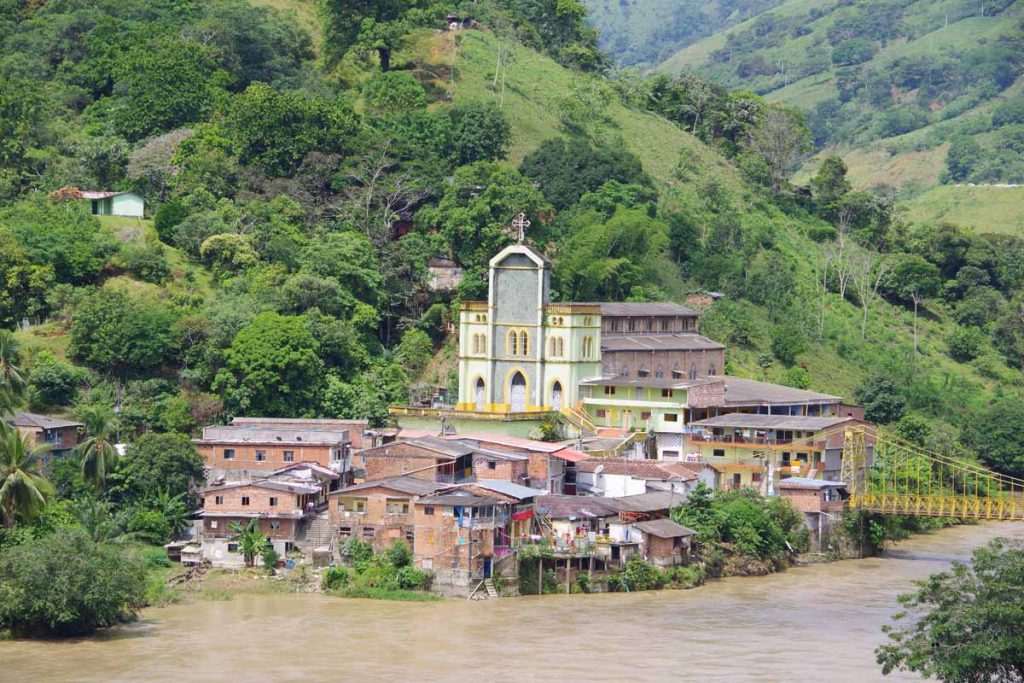 After this crossed the bridge and took a photo of this small piece of town. From here it would be ~20km of a consistent grade. The first part was both warmest and a few spots were the steepest. My odometer read 37C (98F), of which some was in the sun, but definitely a warm and sweaty start. 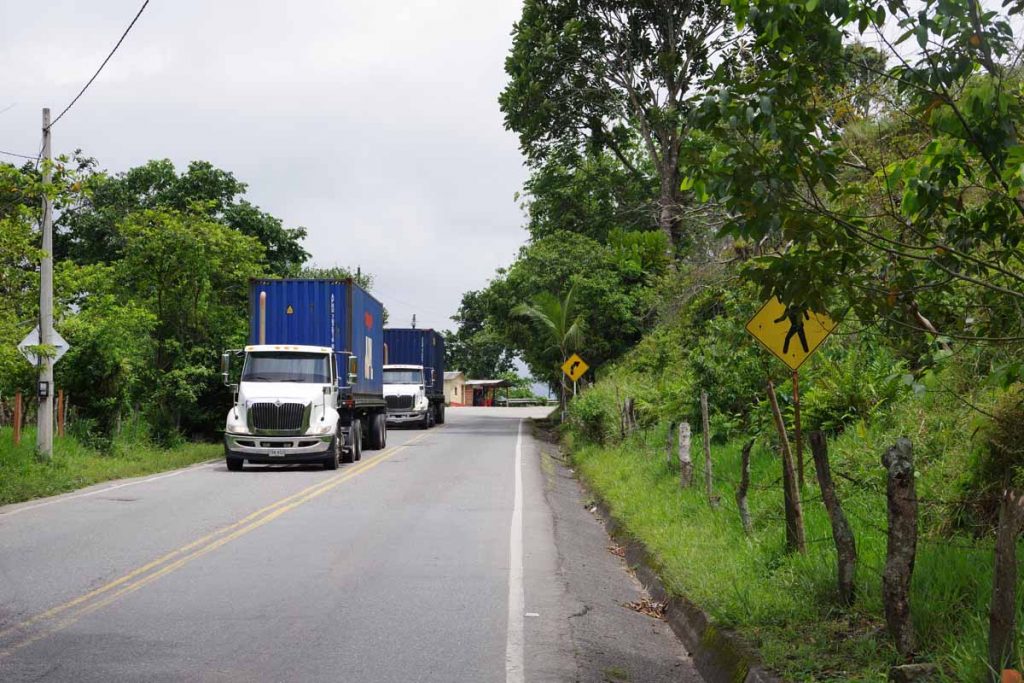 The road was sometimes narrow and not much in way of shoulders. Trucks were reasonably good about giving room, but needed to be careful around some of the corners.

A slow and steady climb and chance to take another rest at 50km mark at a small hotel and restaurant. I was surprised at how many small places there were along the way. 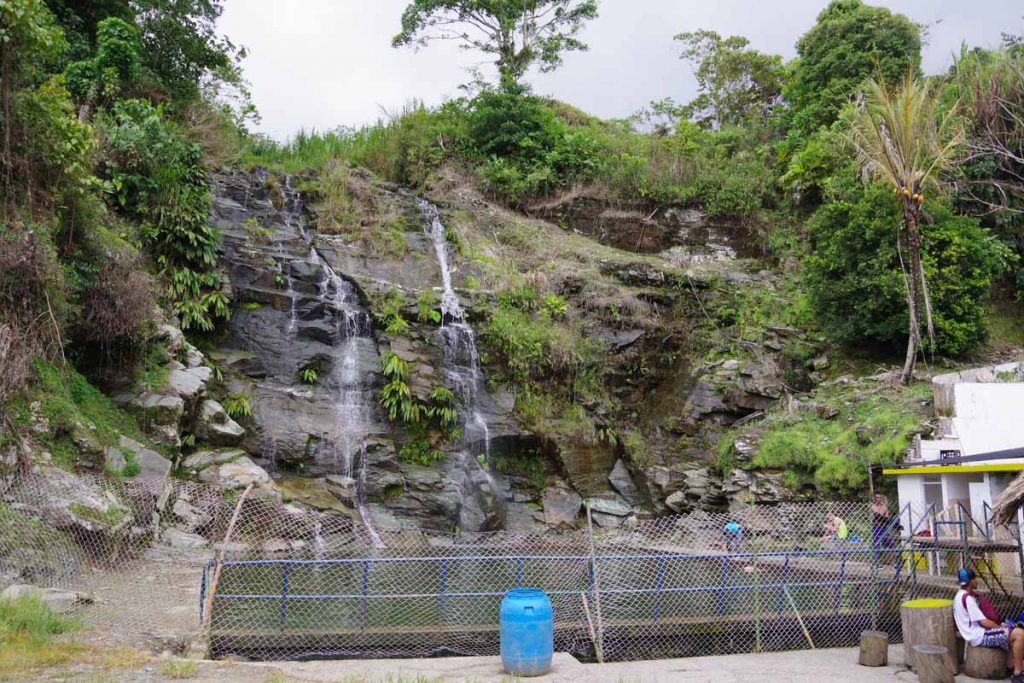 At 57km, was another break. Here was a small pool and waterfall and some cooling off. However, by now temperatures had also fallen. 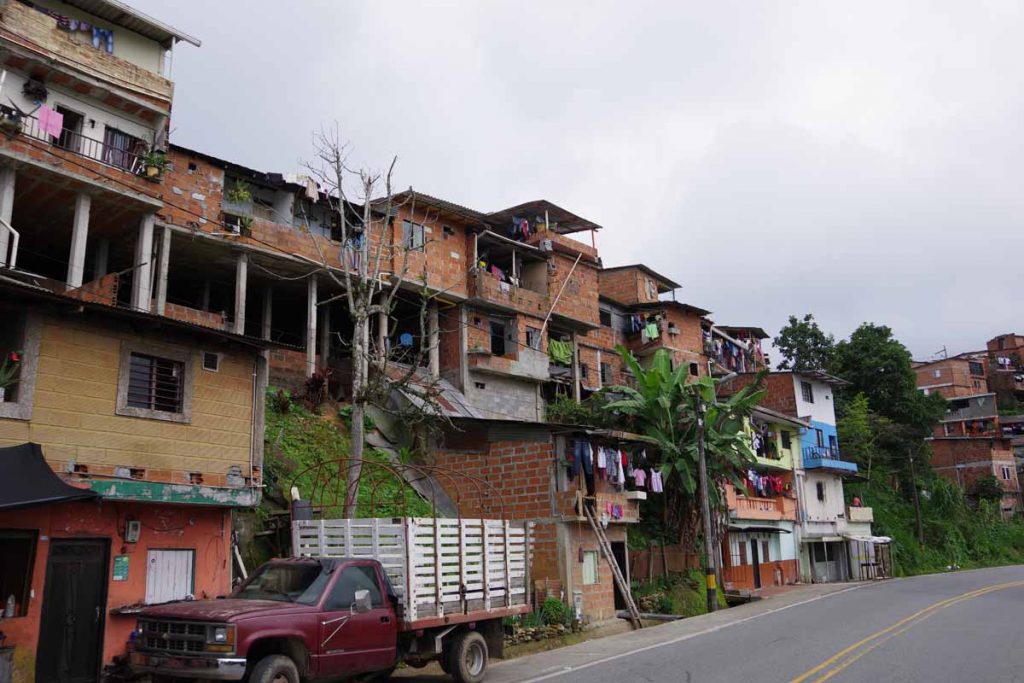 It was a nice sight to see Valdivia. I believe the main part of town is on a sharp hill up to the left. However, I stayed on the main road. The nearby gas station also had restaurant and hotel. No internet, but also only 20,000 pesos ($7) so can’t complain too much. I was a bit beat after the climb, but also nice to have cooler temperatures here.

Day Two
It rained heavily starting around 2am. I listened to the rain and decided to repack my gear: moving my sleeping bag from (not very waterproof) stuff sack into a pannier and moving other things into the stuff sack. While it was still raining in the morning when I got up, it was definitely lighter than the heavy overnight rains and hence I set off. 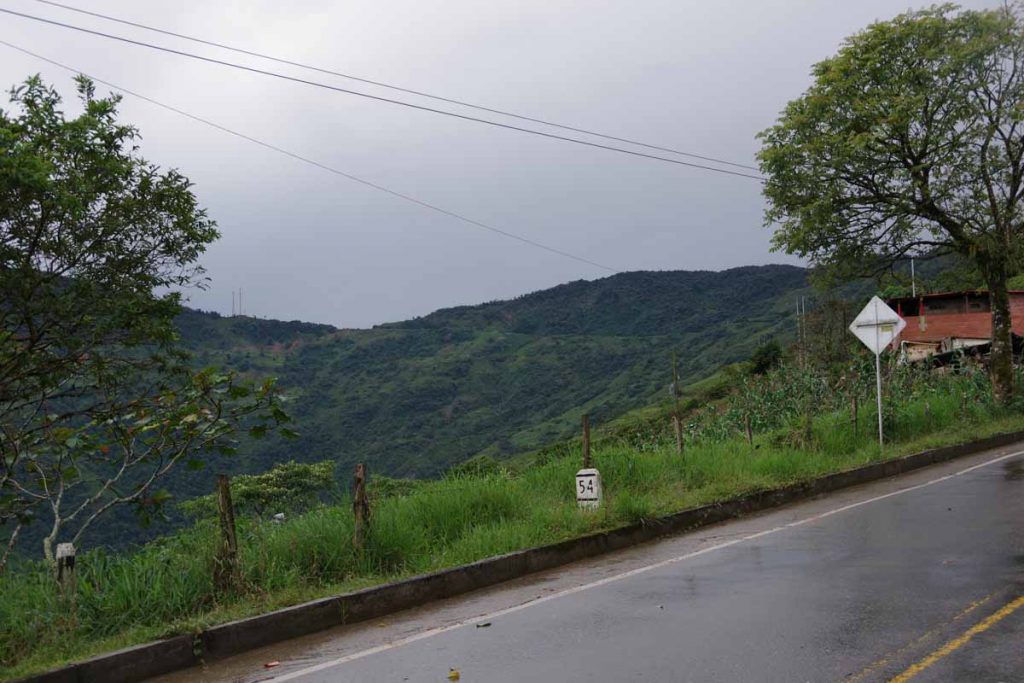 The first 15km had a majority of the climb (~900m or 3000ft) net altitude gain. I started out reasonably strong, but around the 8km mark it became just a bit steeper, particularly an occasional very steep section. To switch off, I walked a bit or two of the steepest bits. Fortunately, by 11km, it was just slightly better and I was back riding. I could see the local top up in photo above, but it took a long time to reach. 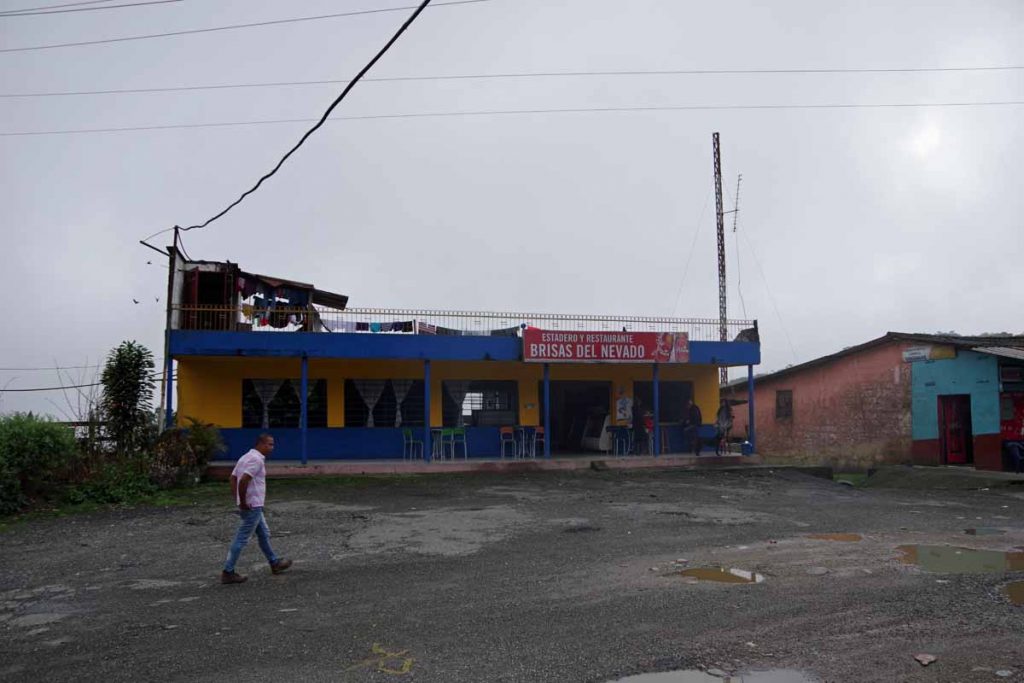 At the top was a military post and 1km later was a nice restaurant/cafe. Well positioned to get a morning snack. After this, I still had a net 450m (1500ft) of climbing, but glad I had the largest share of climb early. It was ~14C (57F) and just on verge of mist/rain and hence needed to make sure I kept moving to keep warm.

Another backlog of trucks stopped here. My best guess was a large oversize vehicle coming up the steep bits. It later also passed me. 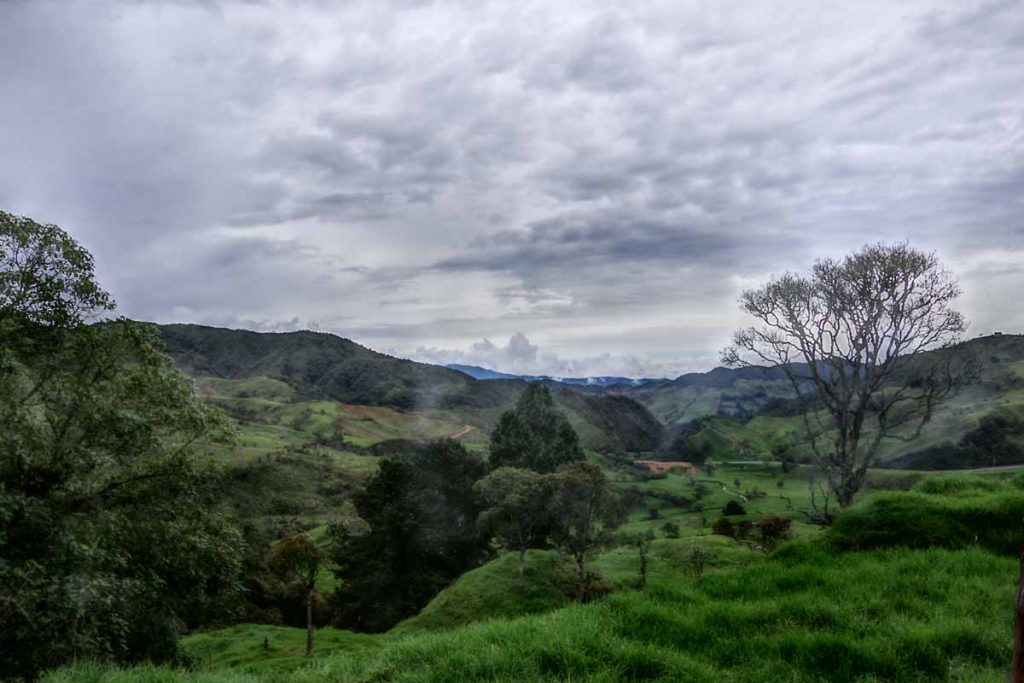 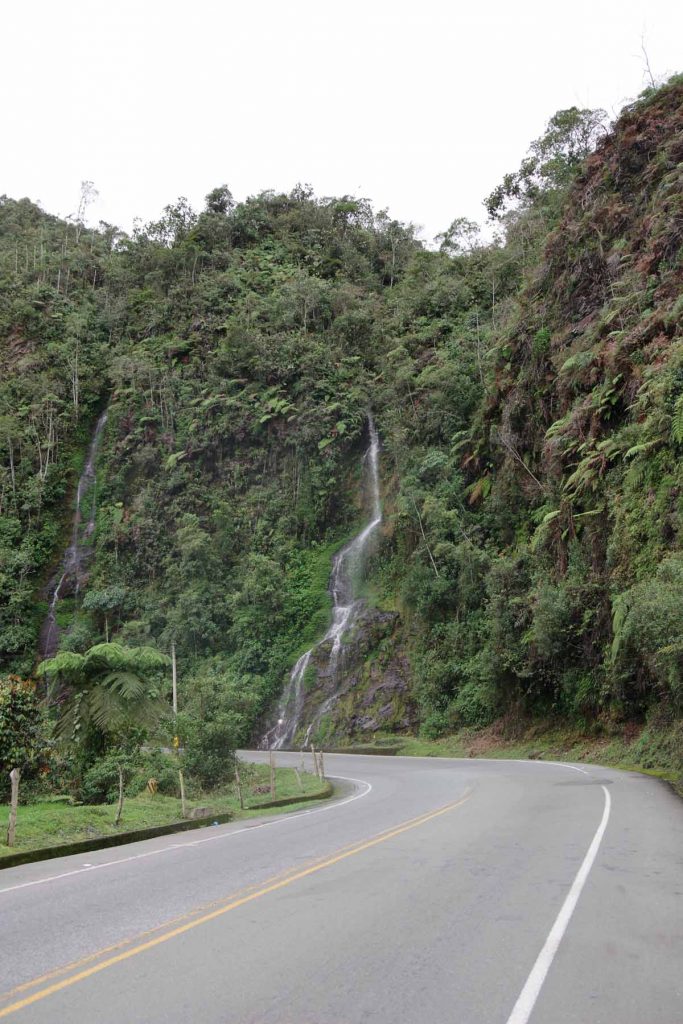 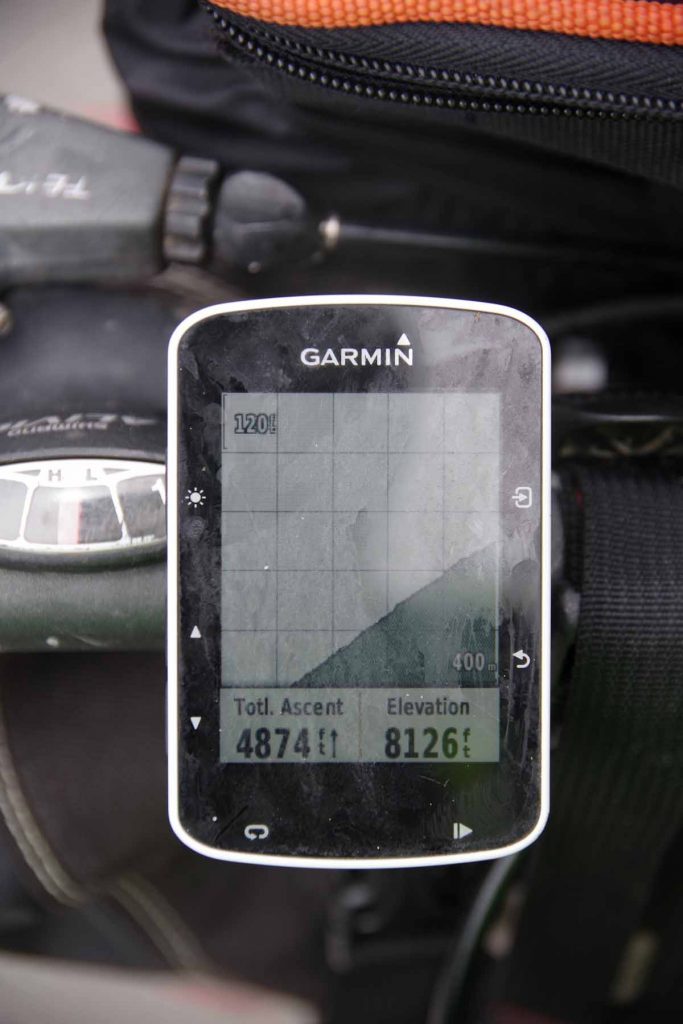 Finally at 32km, I crested the high point for the day. My odometer is set to record distances in meters but elevations in feet. 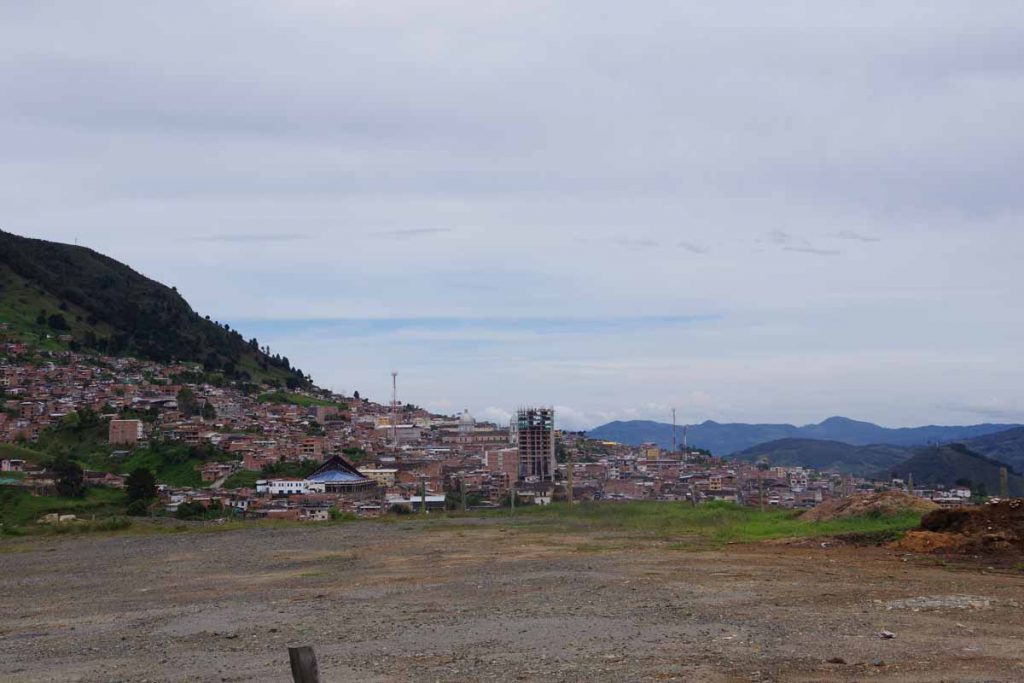 A few kilometers later, Yarumal was visible down below. 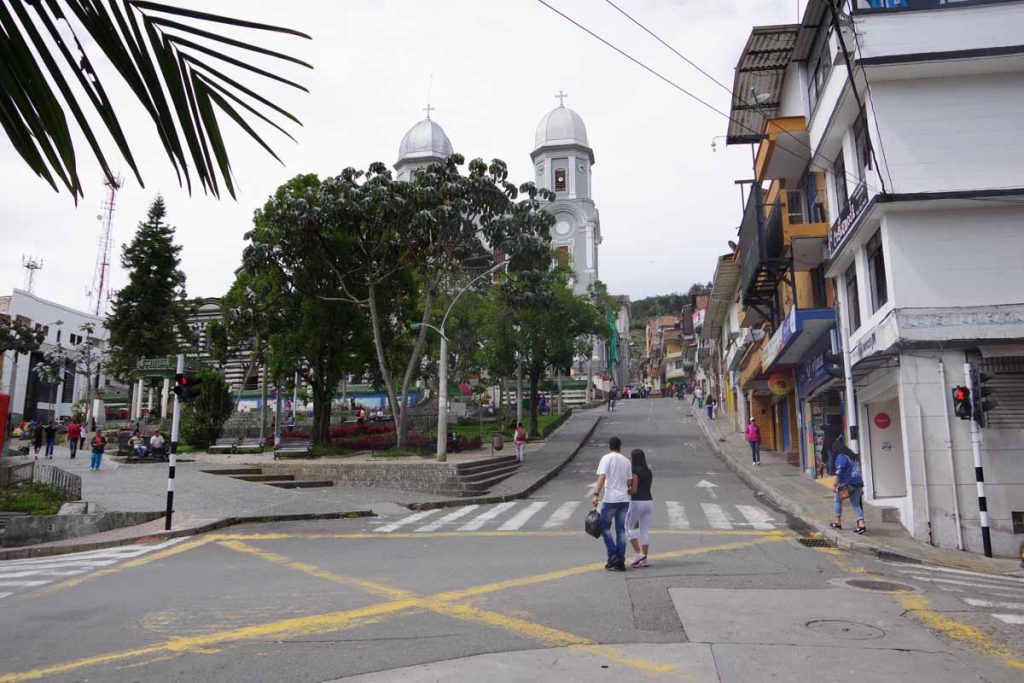 Cycled right into the main square and found nice hotel right off the square. In the afternoon the sun even came out for a short bit! Weather forecast for tomorrow calls for even more rain, but will check conditions in the morning or whether to take an rest day excuse in this little town.