Dodging the rain and climbing the hills. Today was only 44km, but still had over 1000m of climb as I was no longer following the river valley as closely. 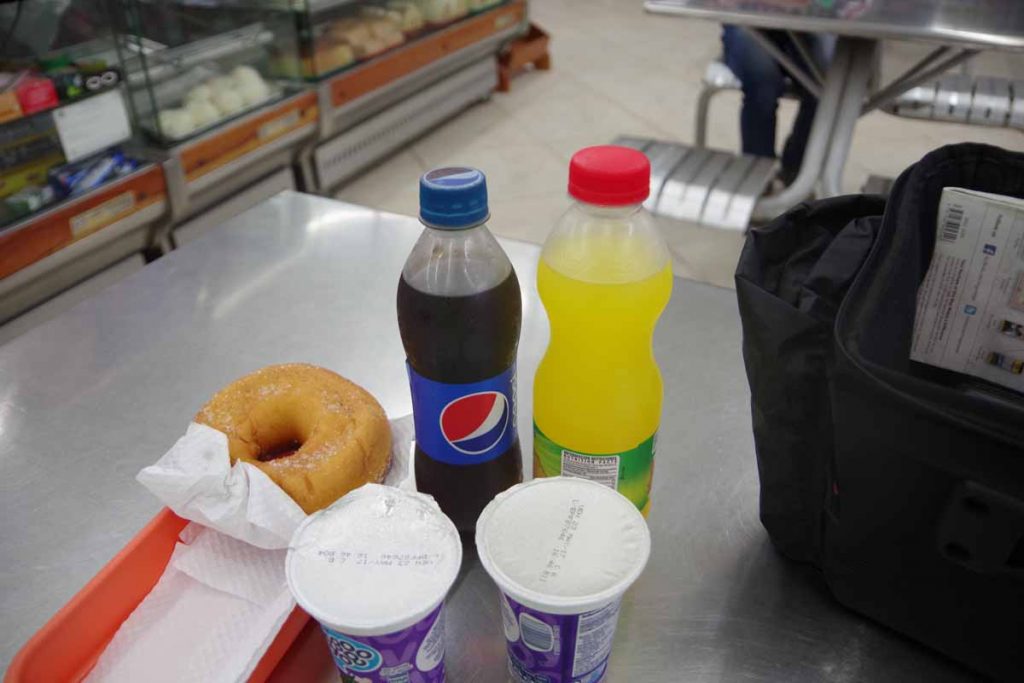 Woke up to find a moderate rain. Hence, I took my time in hopes it might subside. First had to get my bike and gear down from third floor to outside. Next, reassemble everything on the bike. After that, went across the street to the bakery and got some breakfast items.

By then it was raining, though not as hard. The sign for the bridge, “solo un vehiculo pesado sobre el puente”, limits only one heavy vehicle at a time. There was a lot of construction today. Traffic would get stopped and then only one direction at a time would proceed. 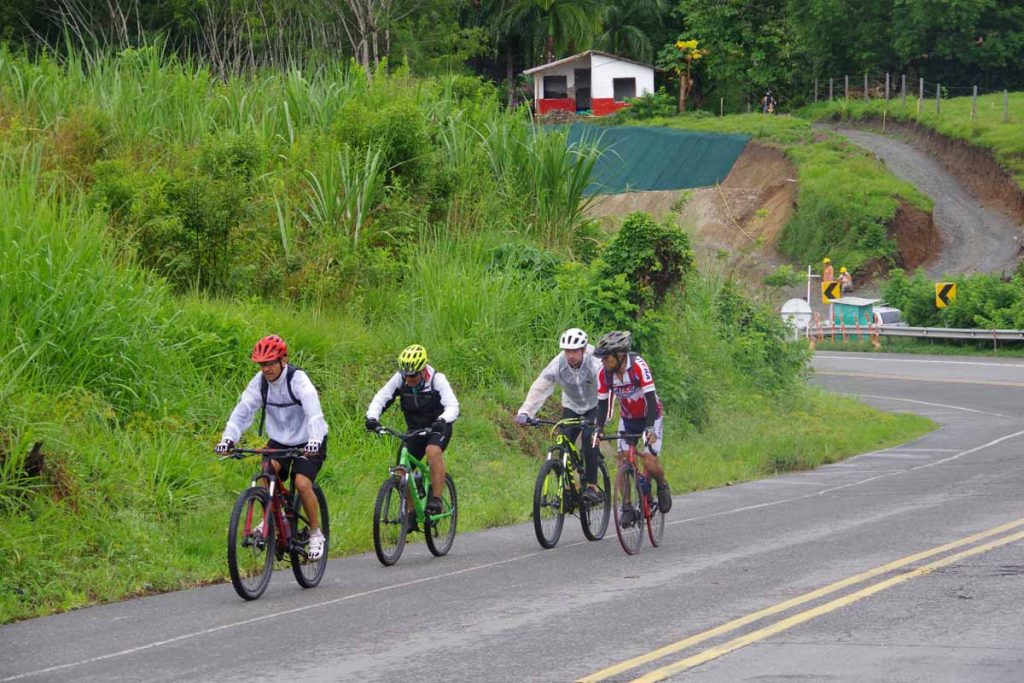 It was Sunday and I saw multiple cyclists out riding. A woman on moped was riding along with (presumably) her husband and son. They passed me on the flats, but a while later on a long hill, I slowly inched past the mother and son stopped, i.e. tortise and the hare. However, the boy was now motivated to not get passed by a gringo with a loaded bike. About five minutes later they came past again. I gave him a thumbs up and got a big smile from the mother. 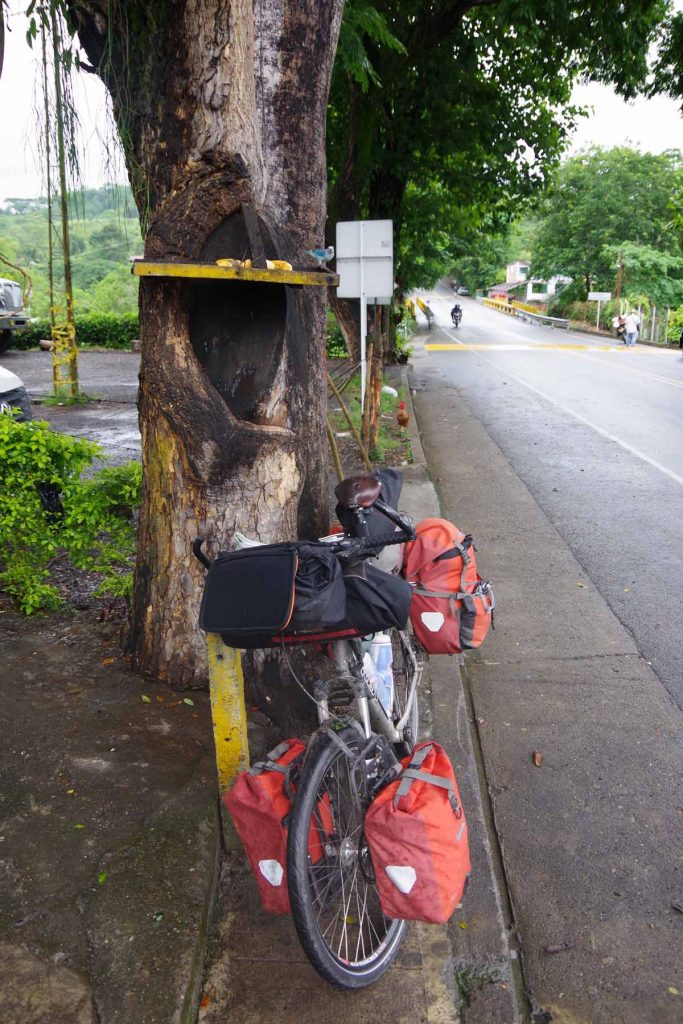 Here I was stopped for a rest and noticed above my bike a platform placed with several bananas. Presumably feeding birds or similar animals. 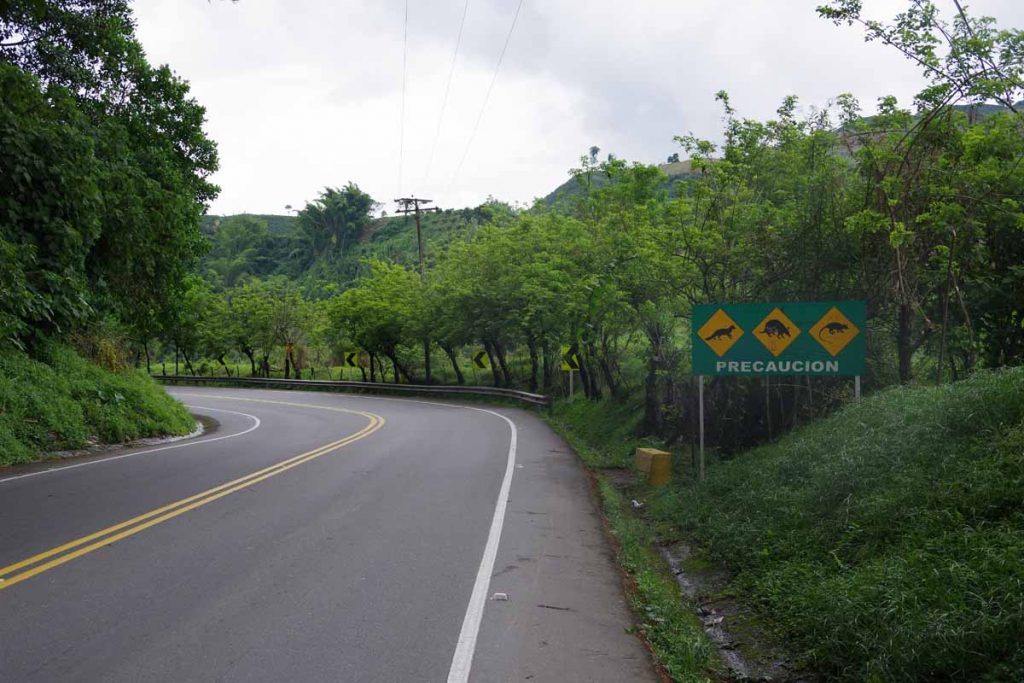 The signs did still warn about other animals.

Overall, it was slow going as net elevation gain for the day was +600 meters (2000ft). However, I also lost and gained some of that a few times as my cycle computer said 1030 meters for the day.

I wasn’t too far from Chinchina when it started raining harder again. Figured that was a good sign to make a not very long day and get dried out from the rain. 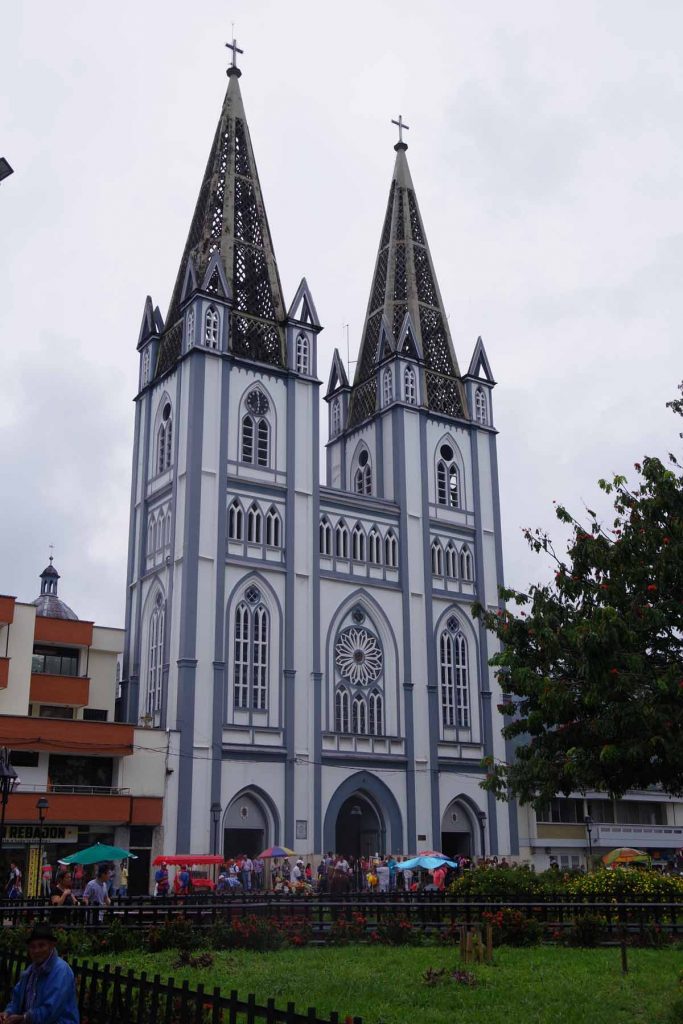 Cycled into downtown and the square with nice church. 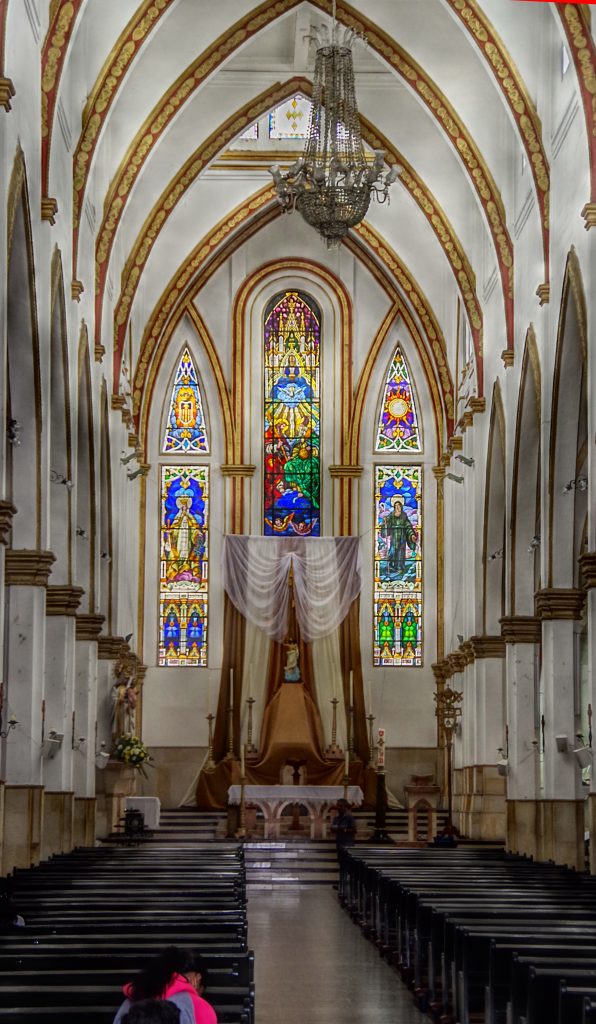 Here was the inside with HDR mode to highlight dynamic range.

I had a target hotel picked out, but unfortunately they wouldn’t let me bring my bicycle into my room. So, I circled back and found a second hotel. Again, had to carry things up two flights of stairs, but otherwise a nice place. 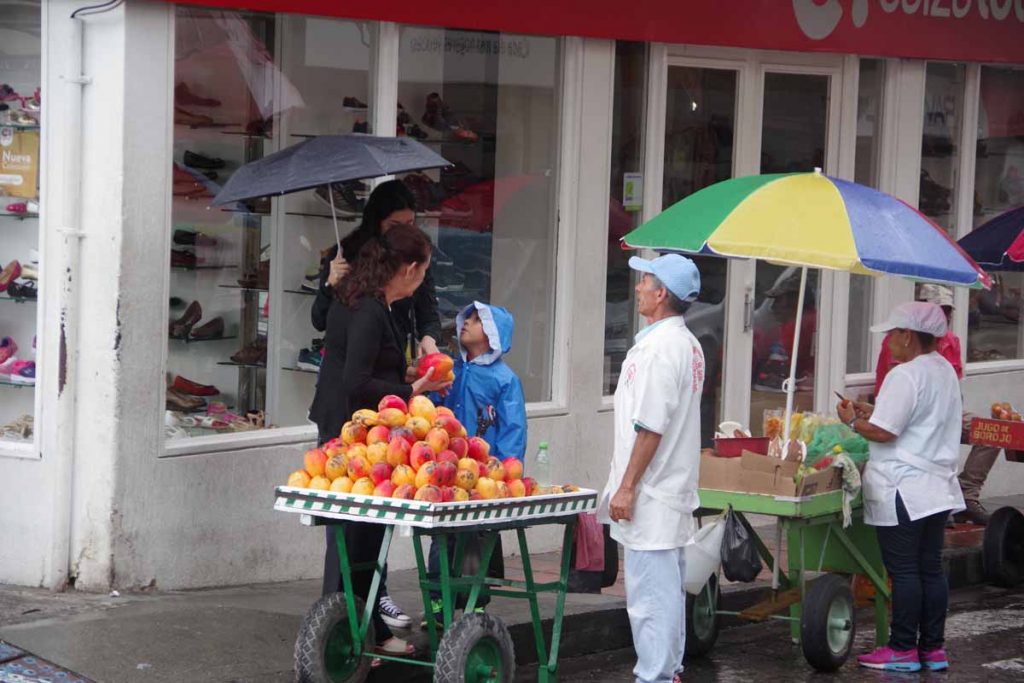 After this walked around town and got lunch. 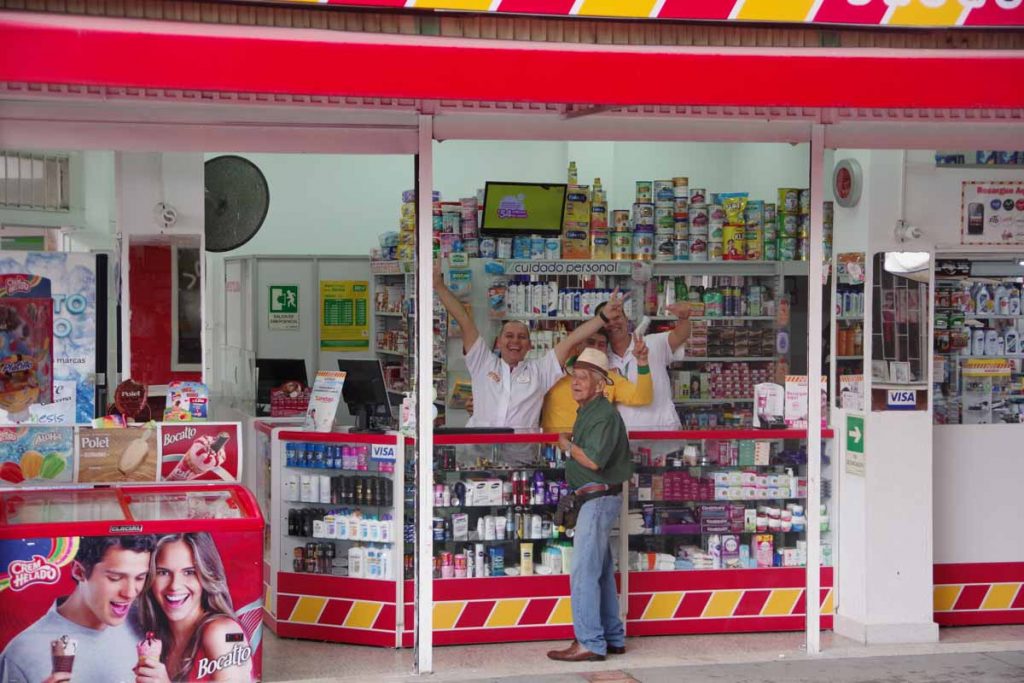 These guys were having fun. 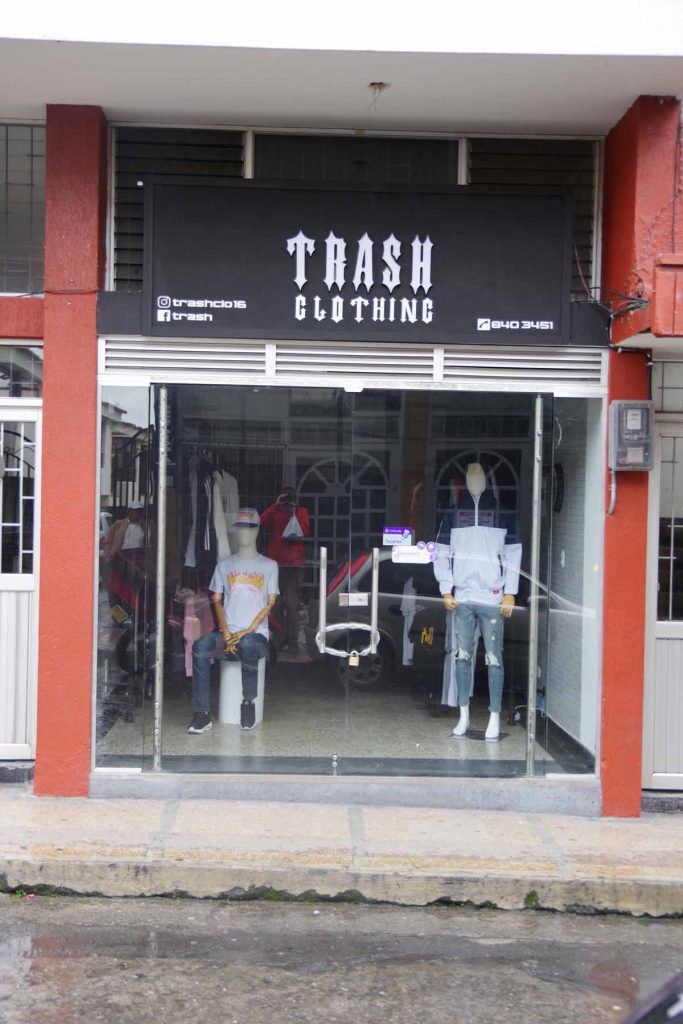 I don’t know if Trash Clothing would do as well in a country where English is primary language.

Otherwise, a nice little town and glad I stopped close to center here rather than place out on the highway. I am now just slightly less than 5 degrees north of the equator.