Blue skies return, mostly, as I ride a “bouncy castle of health.”

There is a road in Southwestern Colombia between Mocoa (where devastating floods happened a few months ago) and Pasto (my next large city), named the “Trampolina de Muerte” (trampoline of death). It is supposed to be very scenic, very rugged, partially dirt and reputation as Colombia’s most dangerous road. Since I’m happier avoiding steep downhills, an easy choice for me to miss. However, it is popular with many cycle tourists.

I’m on the alternate route, which some bloggers described to nickname the “bouncy castle of health” (this one and this one). There were half a dozen shorter steep climbs and then descents on second part of the ride today – however overall not too difficult. 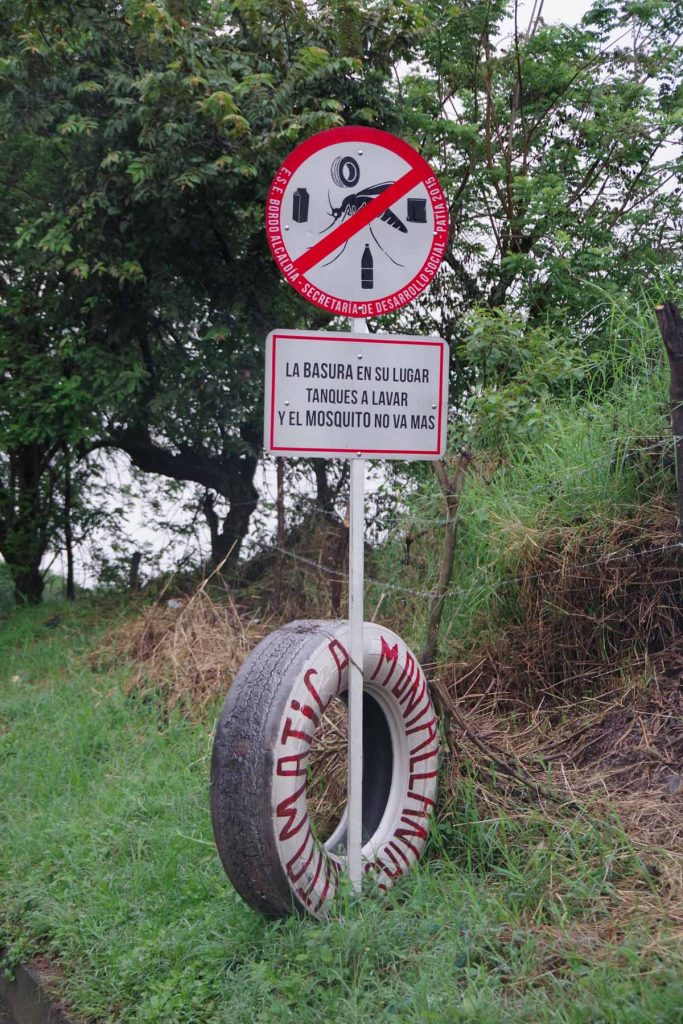 Today started with ~300m of descent from El Bordo. These anti-mosquito signs were posted around the town. However, the tire shop placing their advertisement is actually what they want to avoid, standing places for mosquitoes to breed. 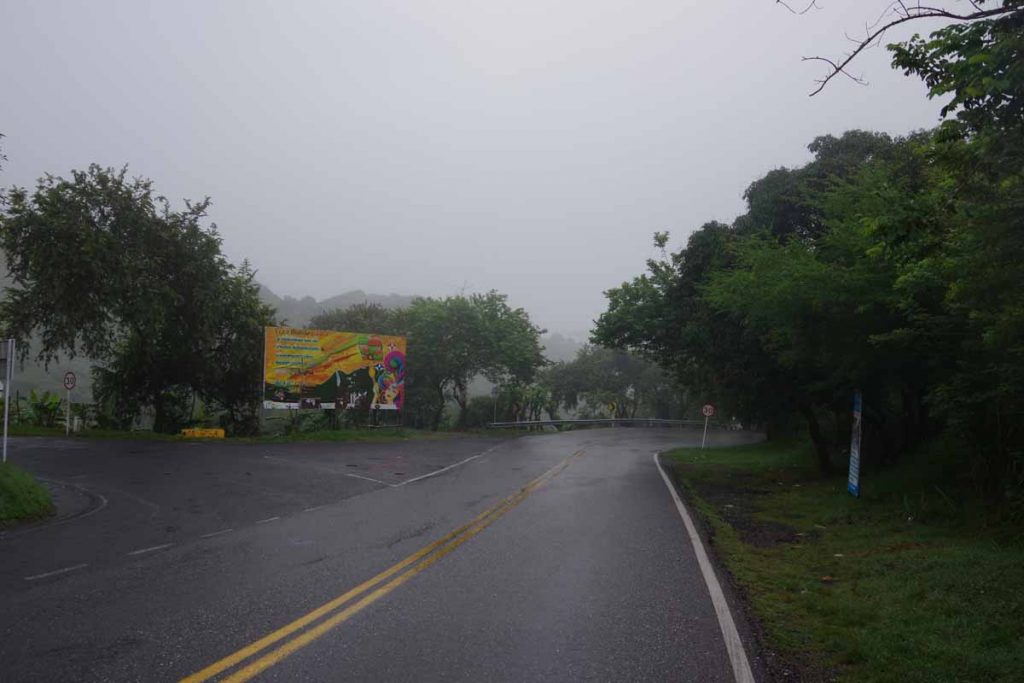 A little further down. It was still misty, overcast and almost drizzle starting out. Thought I might have a repeat of yesterday dampness. 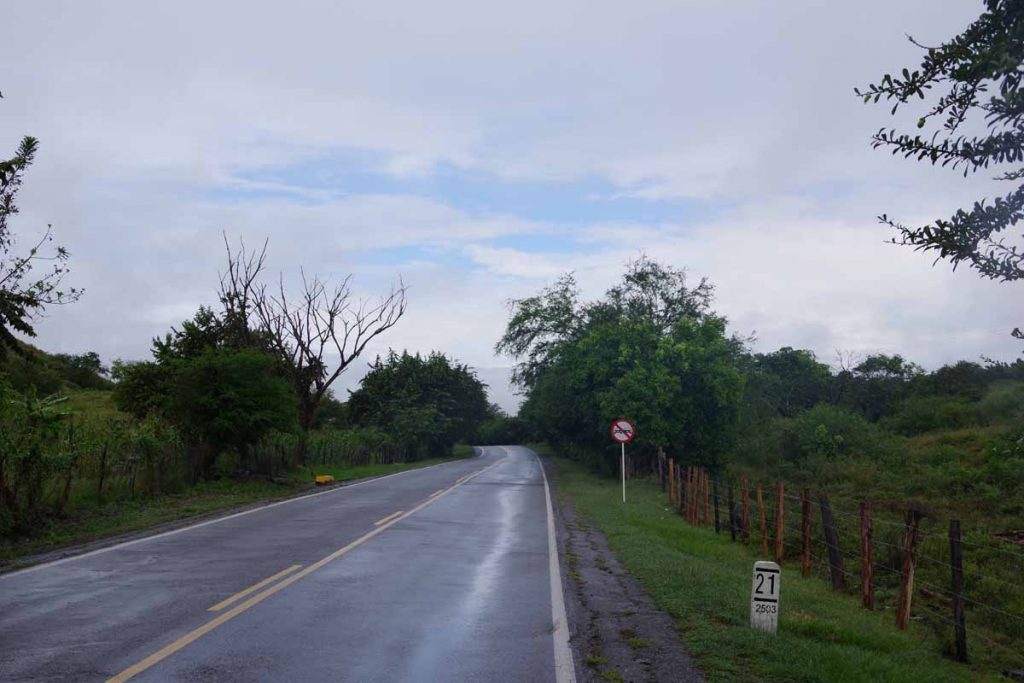 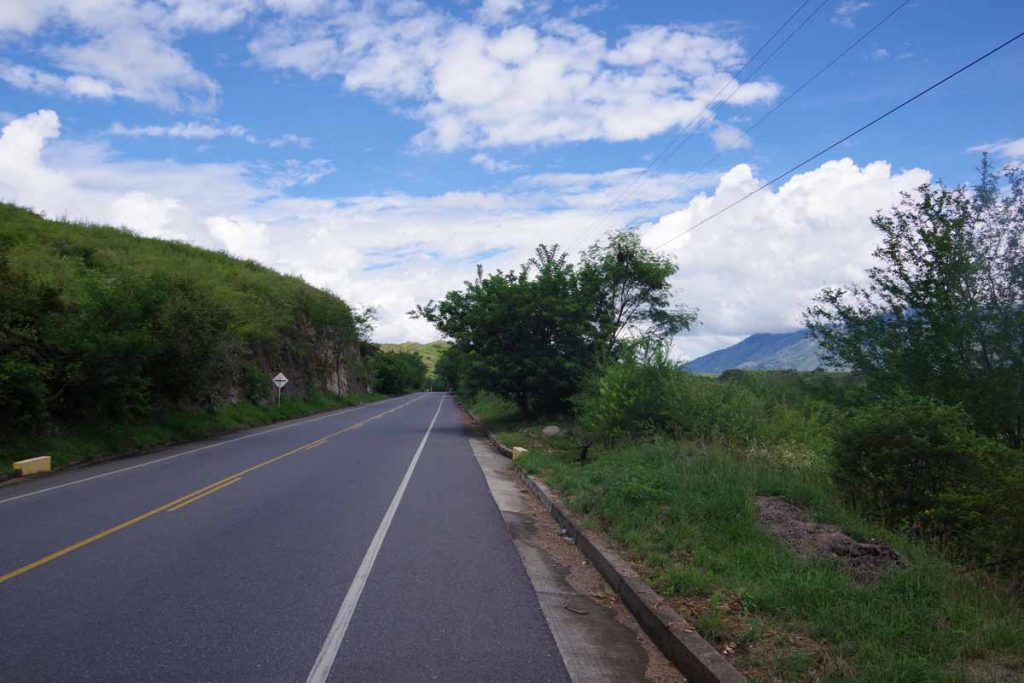 Turned out to be a really nice morning as the clouds lifted and I got blue skies and sunshine again. I was riding at elevation of ~600m but never did it feel extremely warm. The road was relatively flat until ~32km and after that started some of the bounces of the bouncy castle. In total I climbed a little over 800m today and ended up several hundred meters lower than I started.

At 40km, was settlement of Mojarras. After that the next 35km had almost no settlements and no stores. I stopped at intersection in Mojarras and was happy I got bite to eat there. 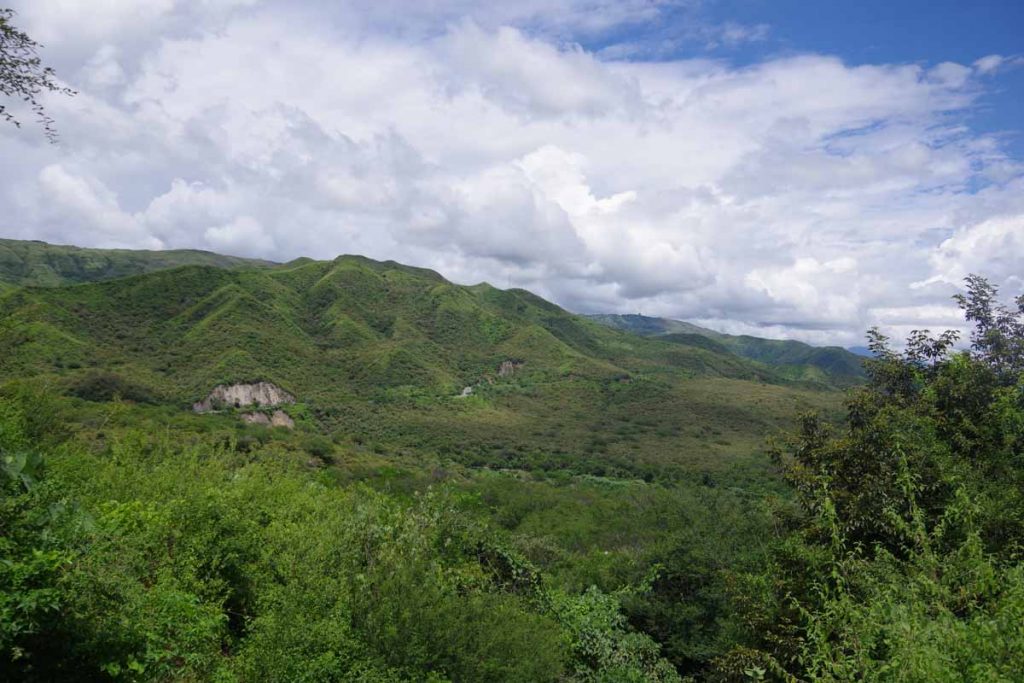 It was a beautiful road. You can see it along the distance. It wound along the hills and occasionally would climb a hill and descent to a crossing creek and them climb again. 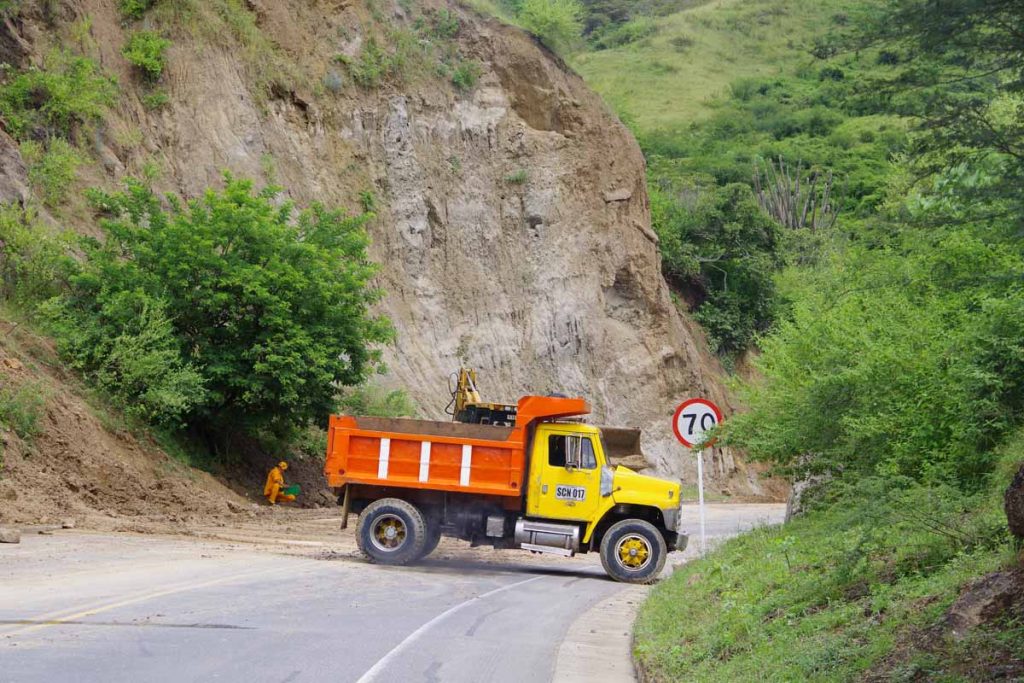 There were some rock slides and this truck was clearing one of them up. 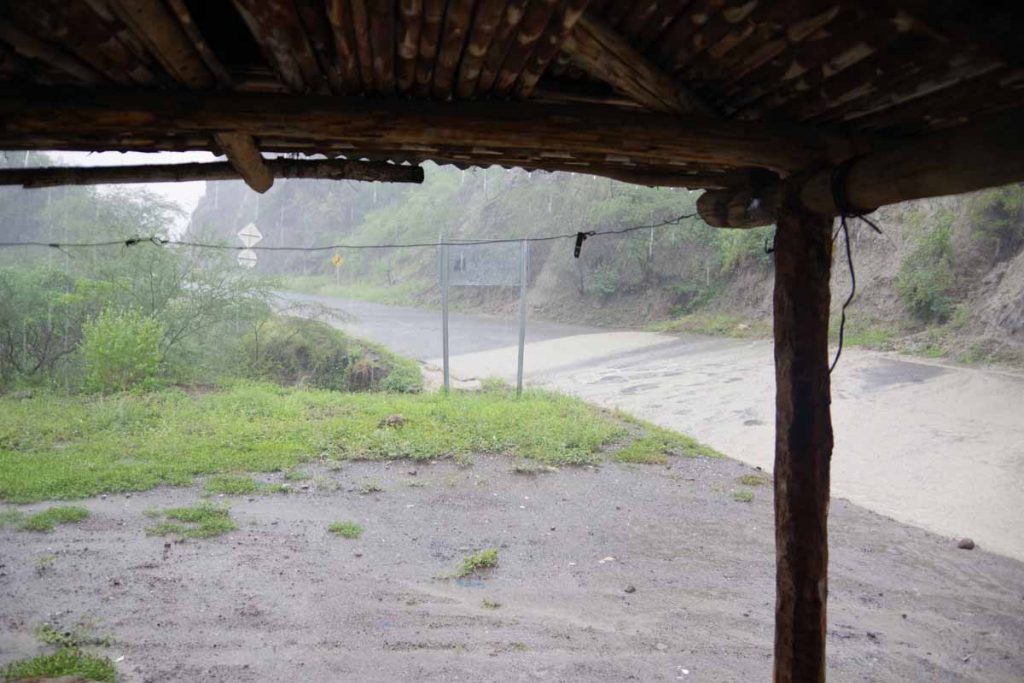 Not much after this, it started raining. Lightly at first and then a deluge let loose. It was raining hard enough that I got off and walked a short bit. Fortunately, just ahead there was small unoccupied cabin with veranda up front. I pulled my bike under the awning. A short while later, two motorcyclists also arrived as well as an automobile and a guy walking in the area.

We waited out the worst of it and 45 minutes later while it was still raining, I continued on to Remolimo. 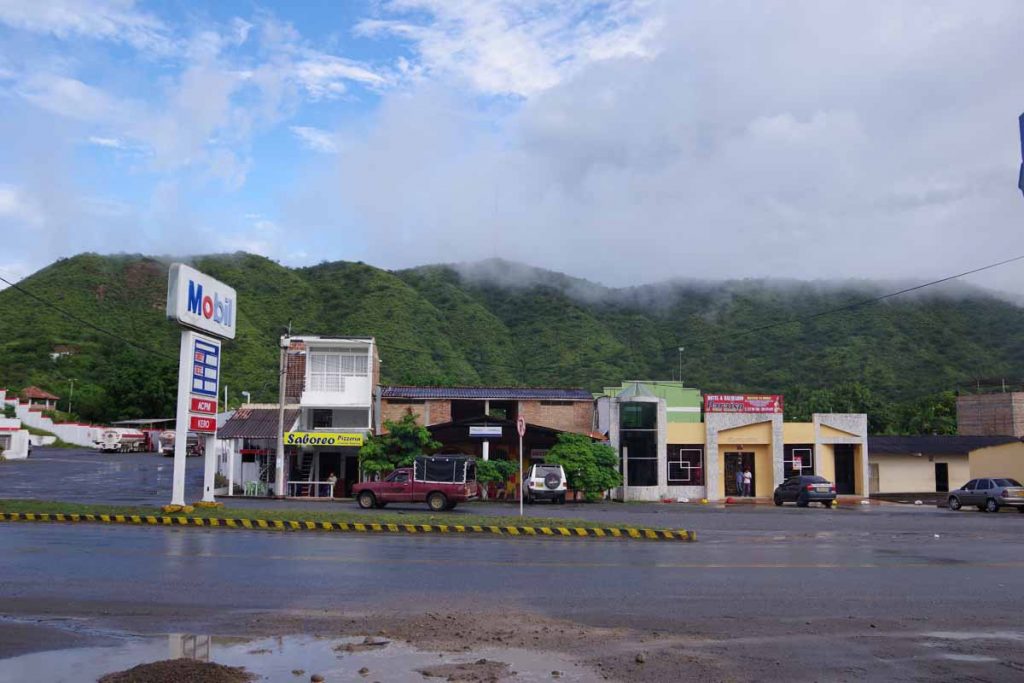 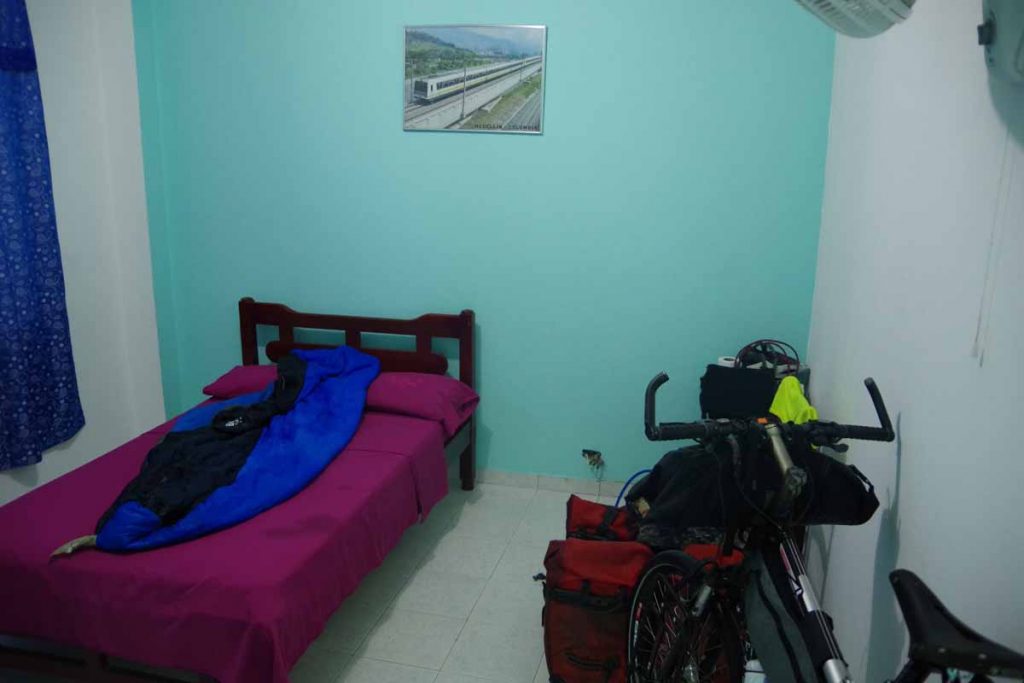 A photo of my room. This one is larger than most, but has nice spot to lean the bicycle against the wall. Sleeping bag is airing out because of rain earlier. Not sure why there is a train photo as art on the wall, but often these hotels seem to have random images. For example, lighthouses in one hotel nowhere near the ocean.

It took me a little to dry out, then a little to figure out how to turn the water on as well as get a working internet connection. However, nice to be in Romolimo now. My elevation is ~600m (2000ft) and hills between here and Pasto top out over 2800m (9200ft) so a lot of climbing ahead. I may have avoided a Trampoline of Death, but doesn’t mean flat route either.