Two challenging days riding and I am ready for rest day in Pasto. First day was challenging with a lot of climbing. Second day was tough with some more climbing and neither bicycle nor myself was 100%. However, happy to be in Pasto. My brother arrives Saturday afternoon so have not one, but two rest days here. I could have kept going and have him meet me further, but also decided this was good spot for a breather.
Day One
Up, down, up. A lot of climbing today, but weather cooperated so all went well. 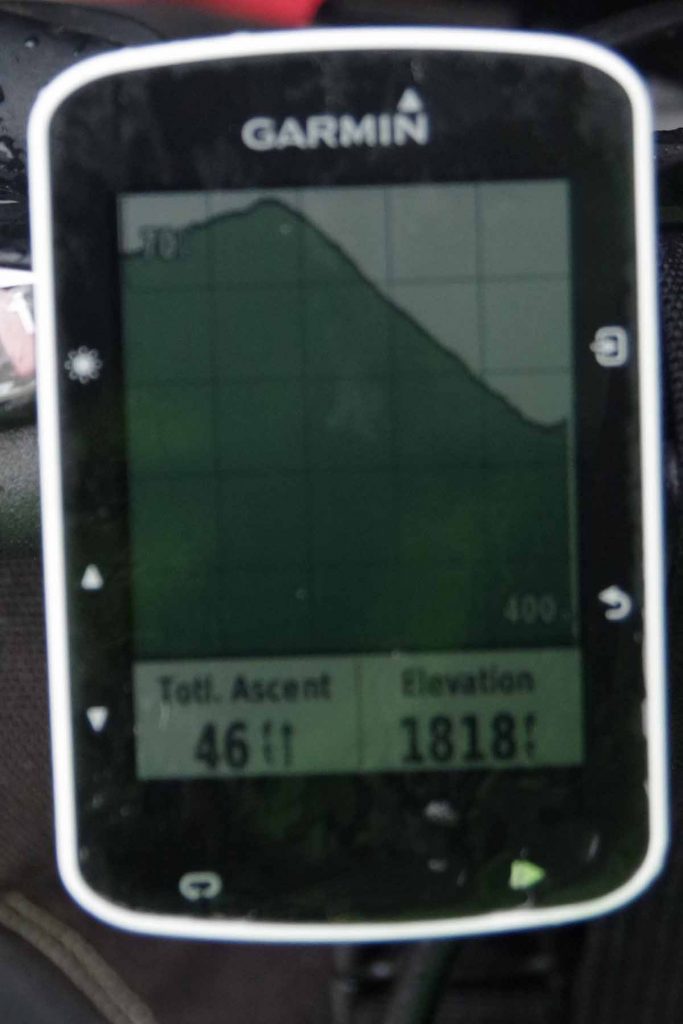 Left the hotel and low point for the day was at 3km where I crossed the river. From here, 23km of climb up to ~5000ft. A little over half that climb was in the first 9km, so steeper starting out and easier after that. 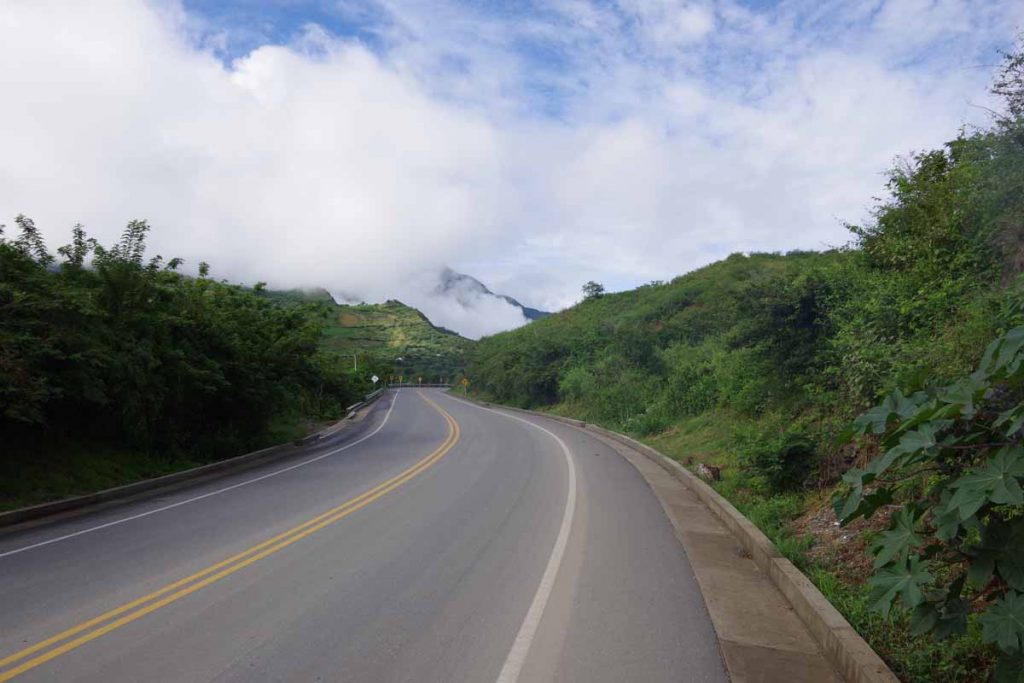 Weather was turning to be a nice day with blue skies. 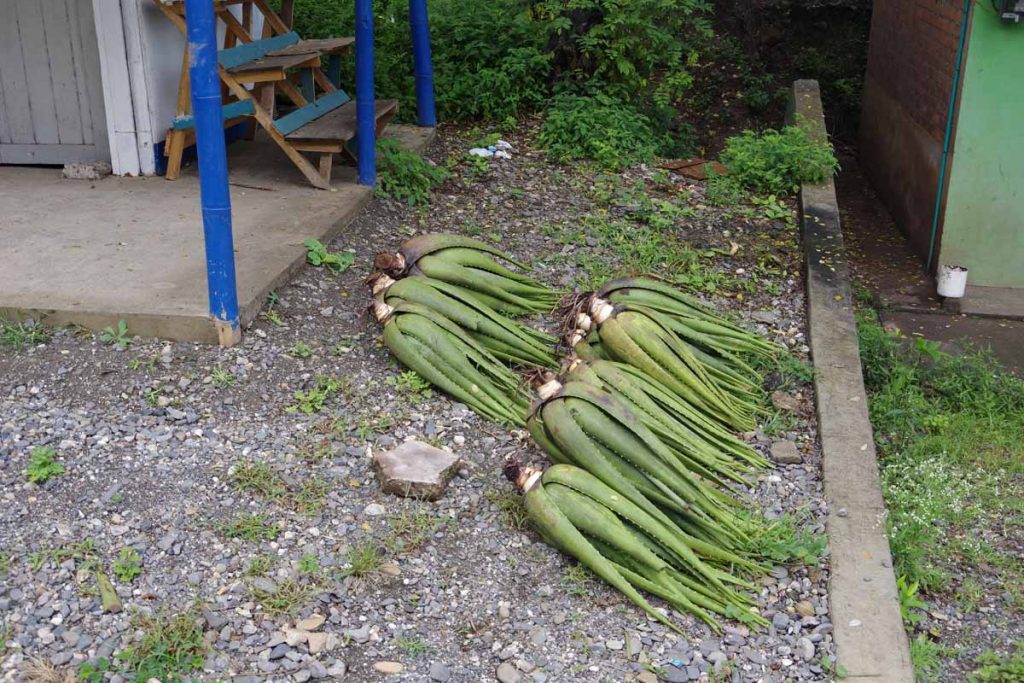 Not sure what these plants are, but looked like they had specifically been harvested here. Also saw a lot of squash and some watermelon as well. 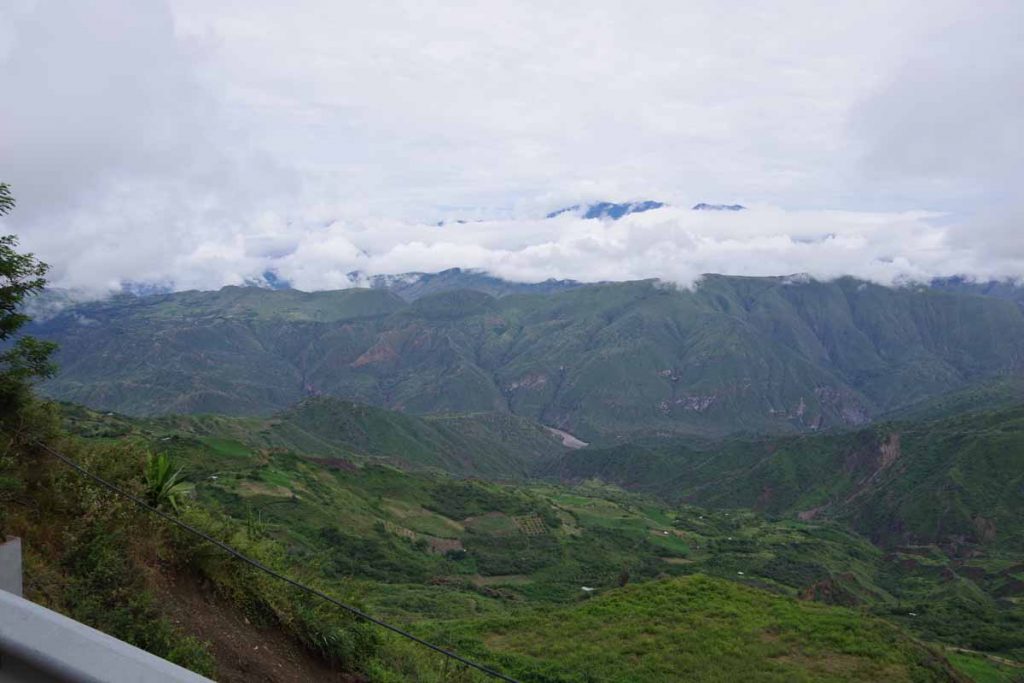 It was a steady ride that took around 4 hours including my stops but nice views on the top. From here a brief level spot before descending for 13km back down to the river. 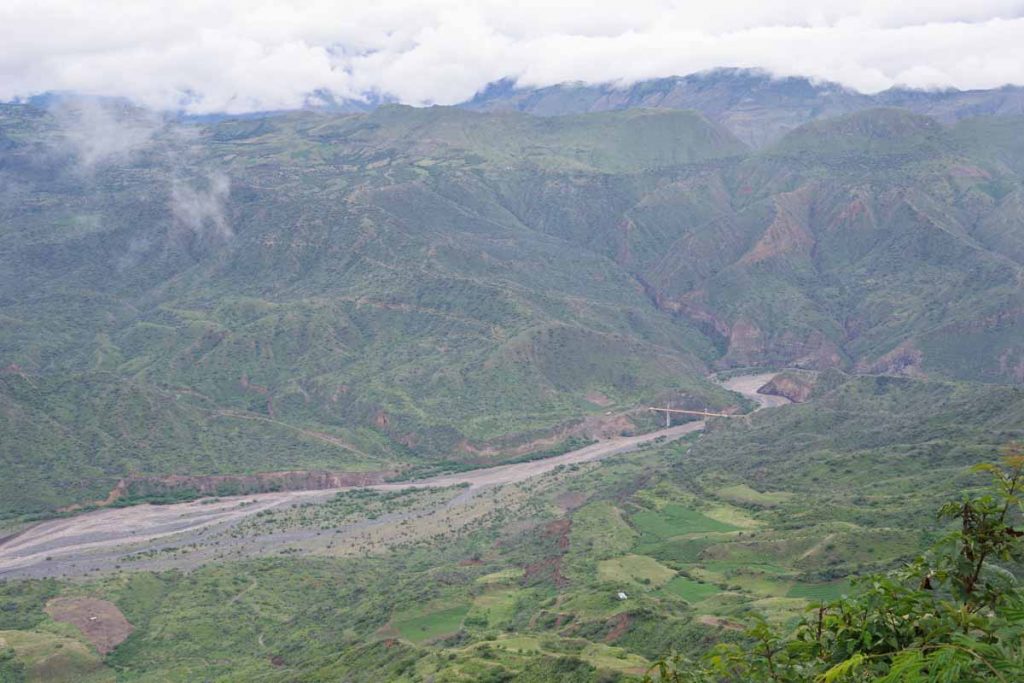 You could see the river down below. 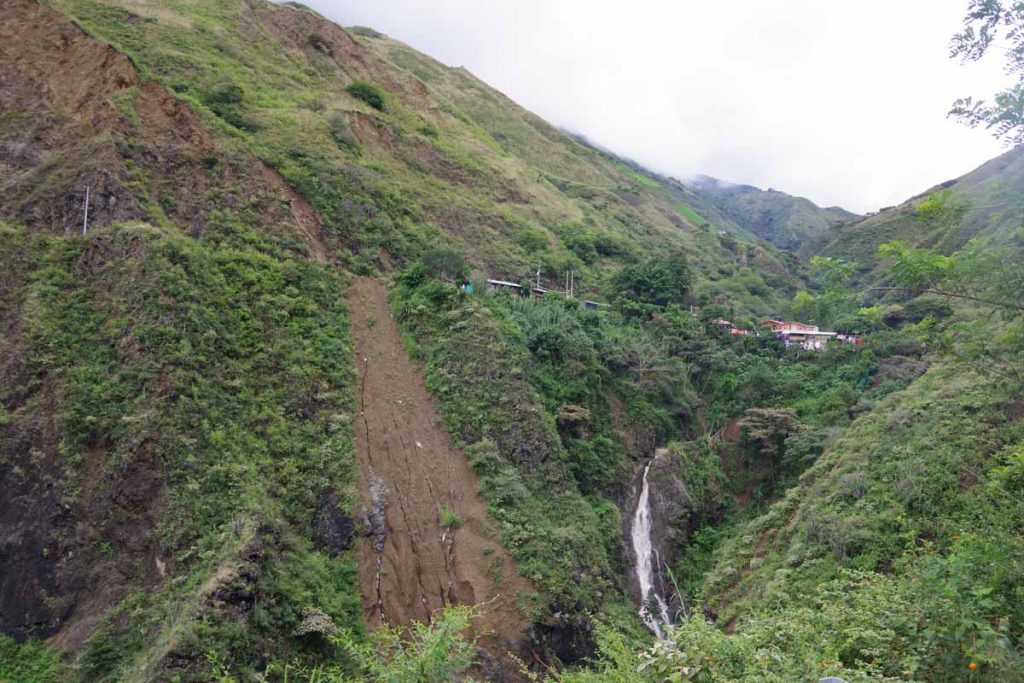 Another view of road on descent with a waterfall below. 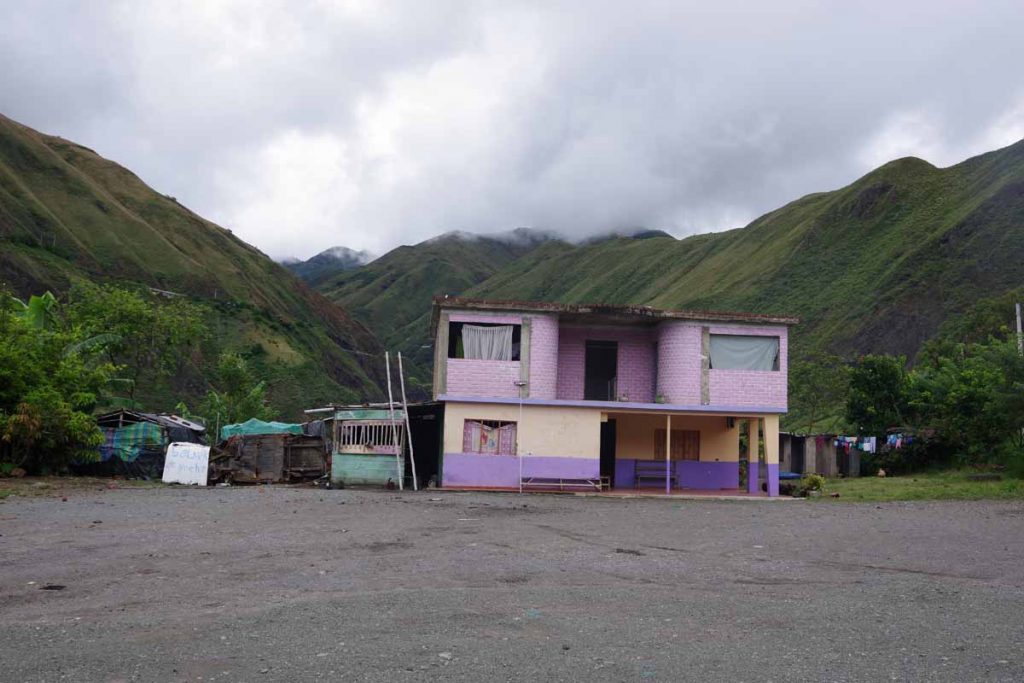 First of two tunnels today. This one on the descent and with a curve. Got somewhat dark, but fortunately not too long. 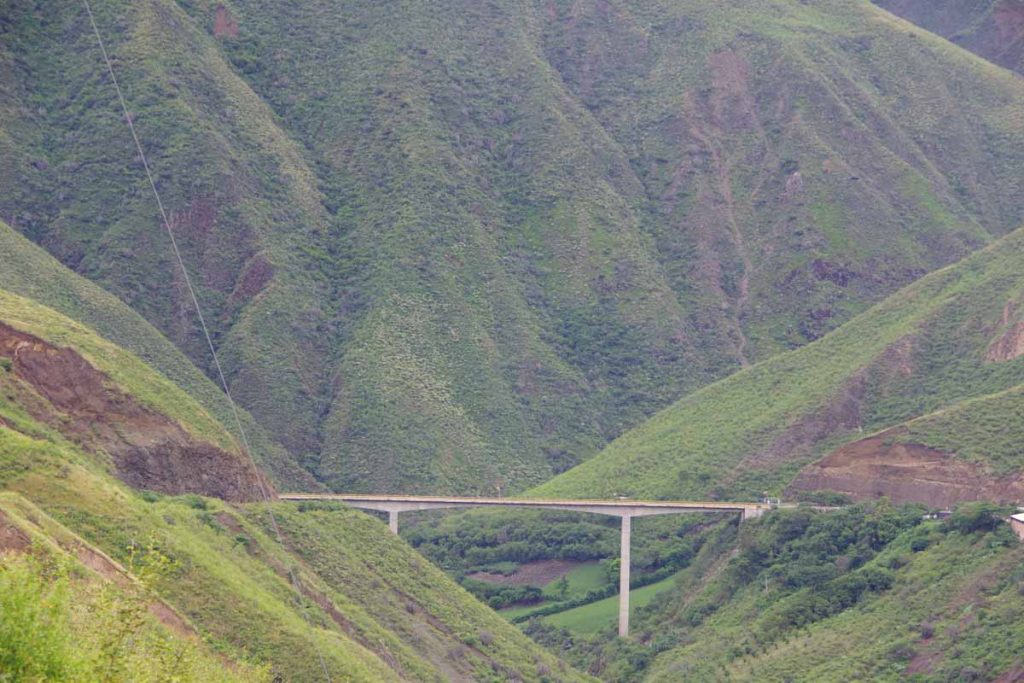 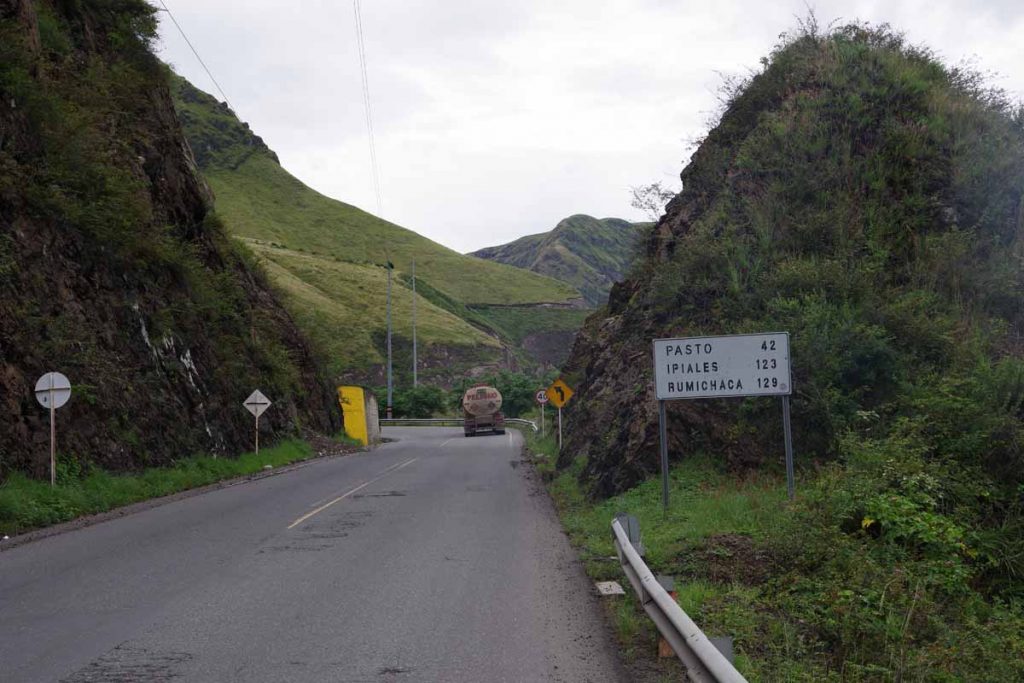 Climbing back out there also wasn’t much for the first 12km. The sign to Pasto made it seem tantalizing close, but a lot of climbing still to go. 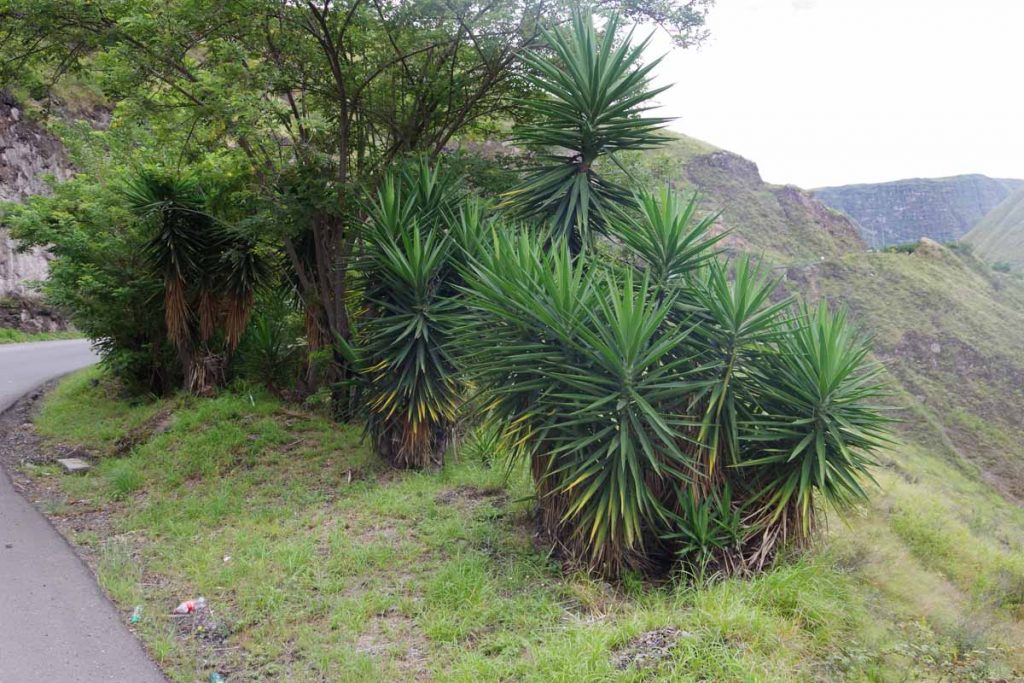 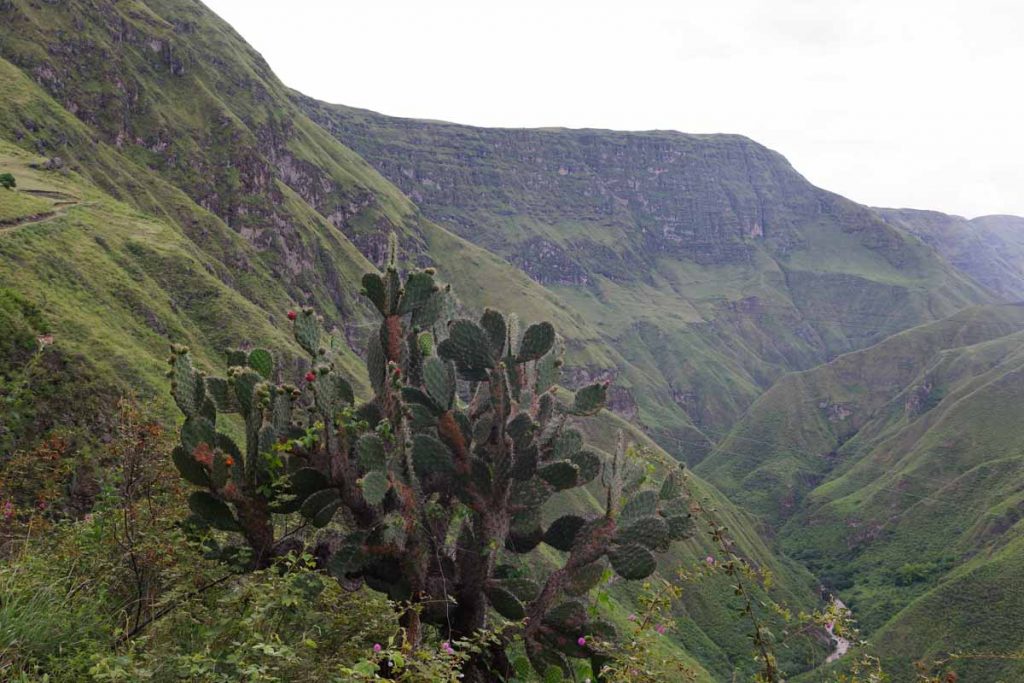 Also nice to see a cactus if this means drier general climate. These road workers were sweeping up debris that fell onto the road. 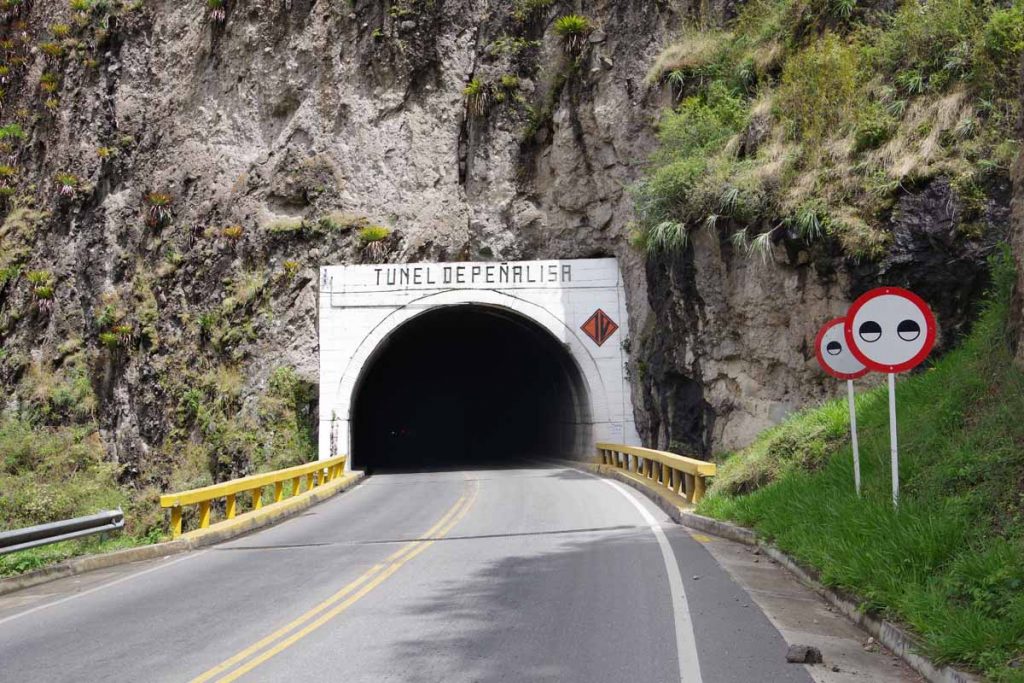 Second tunnel, this one on the way up, so a bit slower to climb. 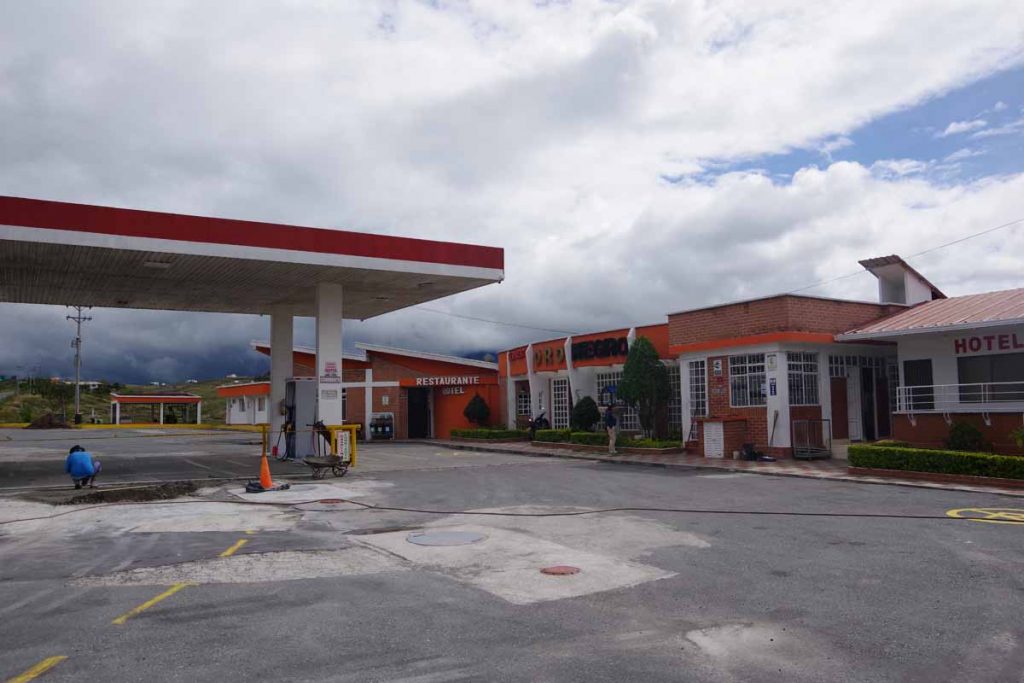 At 50km, first hotel or for that matter store. Not quite clear what the problem was, but I understood I couldn’t rent a room here.

Second hotel a little further had rooms but didn’t have a restaurant, so went a bit further.

Third hotel had restaurant and rooms. No wifi, but can’t be picky. Overall, a long day of climbing but except for light rain starting and some showers along the way, it was reasonable cycling as well as not too hot.
Day Two
Wasn’t feeling 100% today. Had some tuna and crackers since I knew I would need energy for another 1000 meter+ climbing day. Stopped 6km in for a bit more to eat. 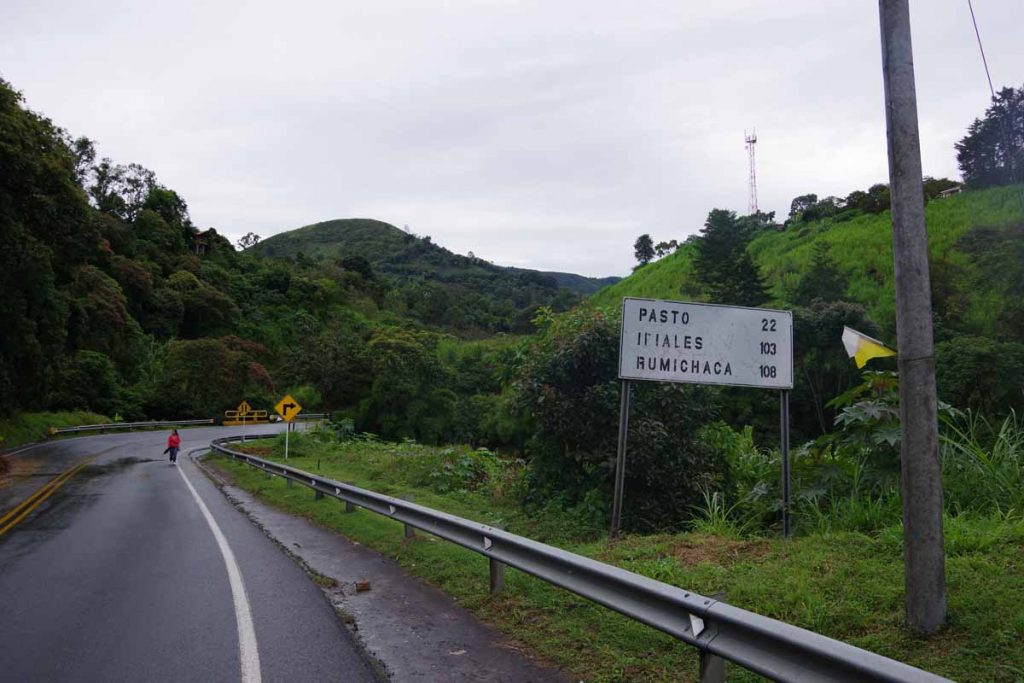 Today was only 31km, though all the climbing was in the first 24km. I was quite slow. Also noticed that my rear shifter continued to stick. Eventually I could get into lowest gears, but disconcerting since I use those gears a lot. 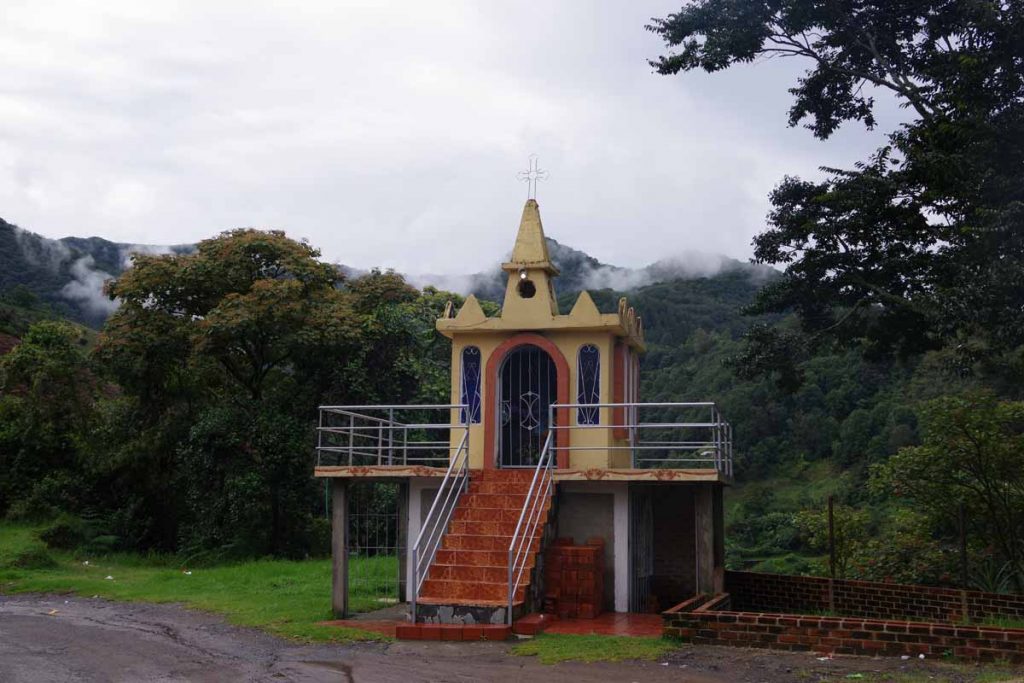 Small shrine on the way up. Up to the right, you can see the top! 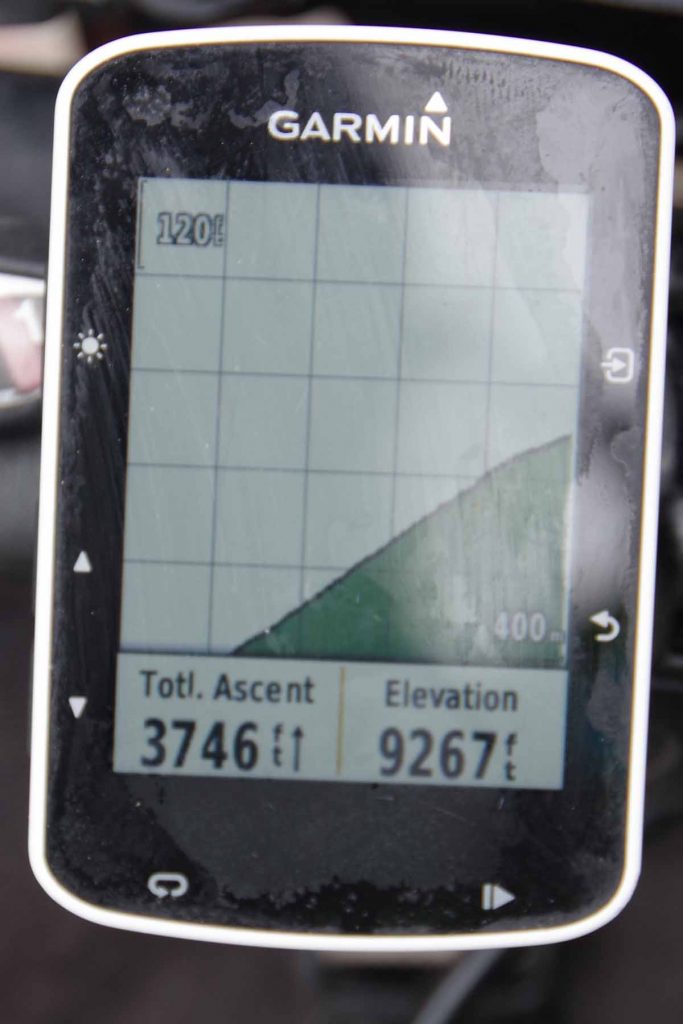 Odometer height shot, pretty much at the top. From here a nice 6km descent down into Pasto. 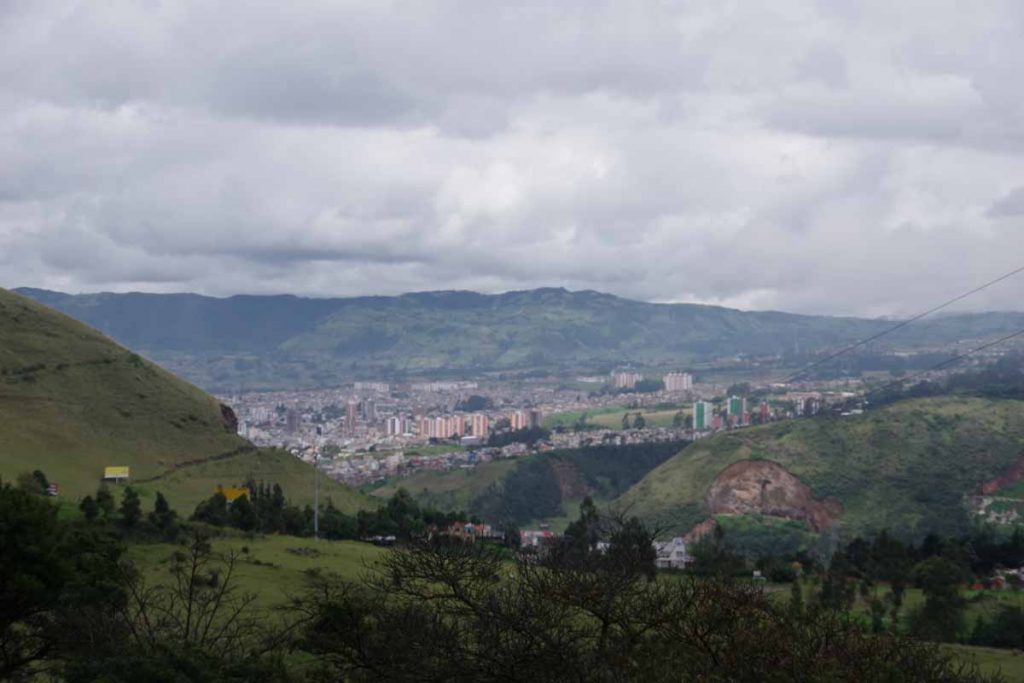 First view looking down on Pasto. 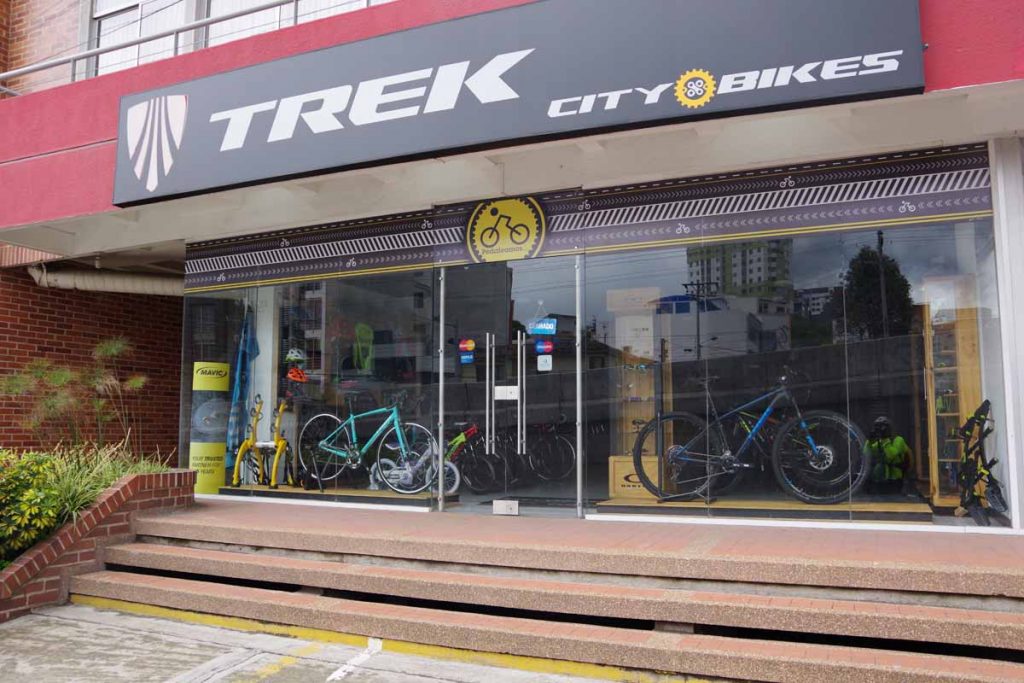 I looked in Google Maps to find spot with bike shops and found three clustered not far apart. The first one was closed, so I found a hotel first. This seems to be the business district with nice hotels. This one was a little more expensive (but still cheaper than US), but I was also motivated to have a hotel with both hot and cold water.

Afterwards, I went to the bike shops. Discovered they all seemed to close for a lunch siesta. Thought the first one would open at 2pm, but was then told it was 3pm.

Found the specialized bike shop nearby. Had them replace my brake pads. Rear pad had been worn and the clip had actually just gotten bent, most likely on the final descent into Pasto. They looked at the shifters, but couldn’t do much for them. Suggested getting a new set. They didn’t have them at this shop, but instead in center.

I got the sense, repair isn’t much of the business – instead it is mostly sales and assembly. When I asked for the price to do the repairs, I was told free. That didn’t seem right and asked three more times, but eventually got changes done without charge. Wow and thanks.

Second bike shop didn’t have shifters but suggested a shop downtown. Third shop does seem to have a shimano eight speed shifter and brake combination. I’ll sleep on it overnight, but otherwise likely have it replaced tomorrow – hopefully some peace of mind that these gremlins I see now, don’t turn out more serious.

Otherwise, nice to be in Pasto, get some laundry done and otherwise get ready for restful rest day (Friday). Will likely move to downtown hotel for last night when Bert arrives via bus with his bicycle.