Greetings from Ecuador! These past two days, we cycled over two larger hills from Pasto. I say “we” because, my brother Bert arrived in Pasto day before, by bus, with his bike and is joining the ride for a bit. Nice to ride with him.
Day One
From Pasto to the the last reasonable sized town on the Columbia/Ecuador border (Ipiales) is 83 km. However, there is ~2000m of climb so our plan was to split this into two days. 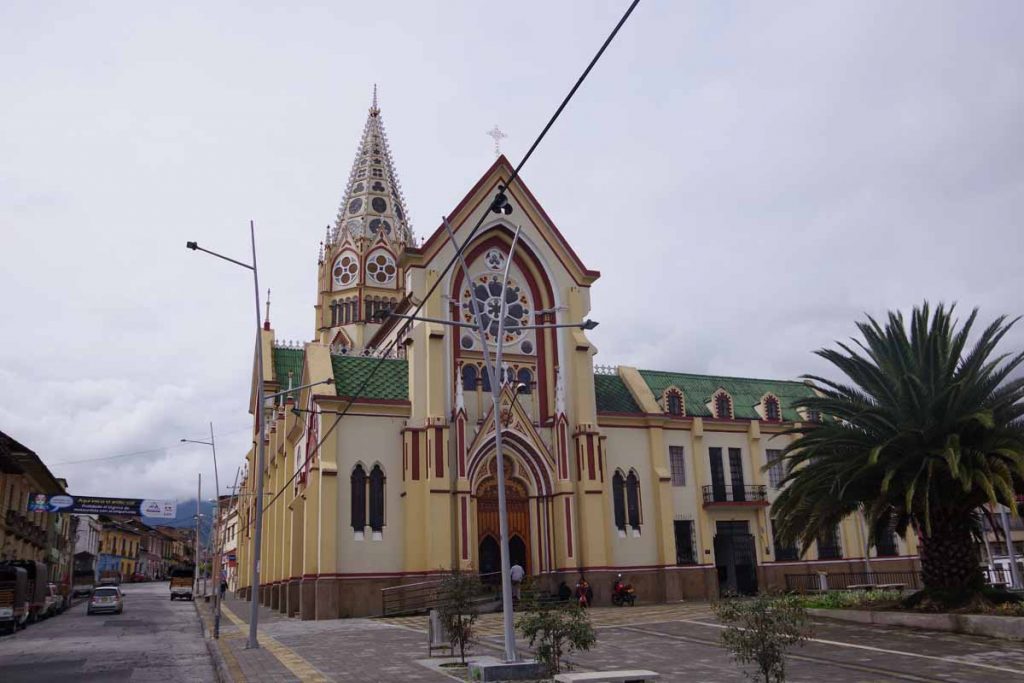 One of the churches in Pasto. We started from near the bus station. Some of my photos on this first day out of focus (sorry), though this first one was fine. 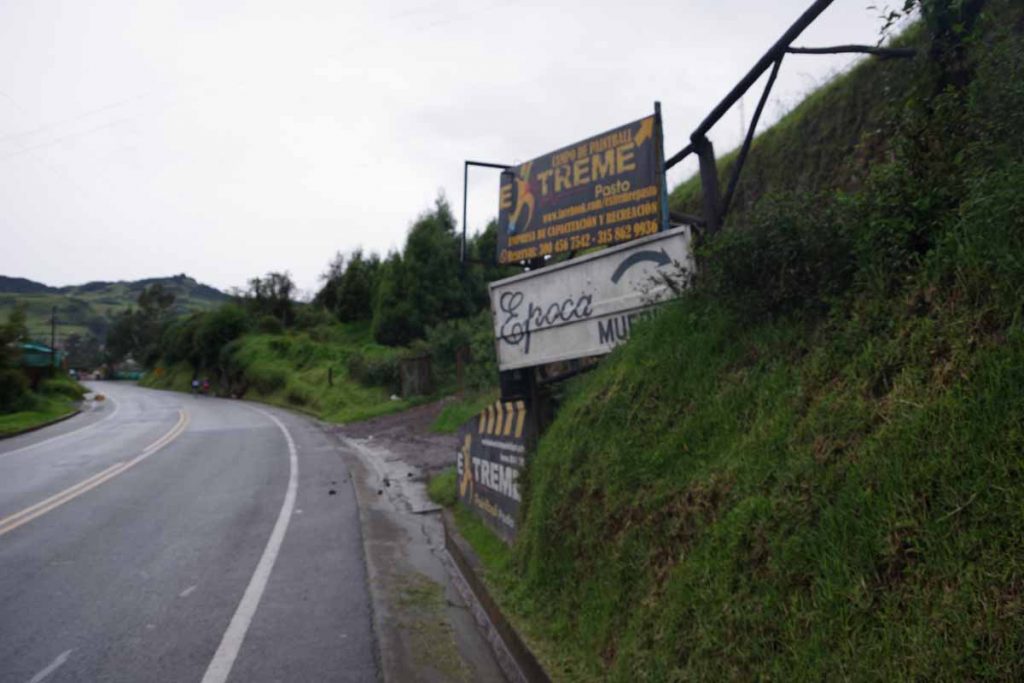 From Pasto there is a ~600m (2000ft) climb starting out, followed by a ~1400m (4600ft) descent. So it was a slow grind to get up top of the hill. It was mostly a slow 6-7% climb. I thought it was interesting to see a paintball place. Overall, parts of Colombia I’ve seen, appear to be a little more wealthy nation than some of Central America (e.g. Honduras or Guatemala), so paintball is one of those indulgences. 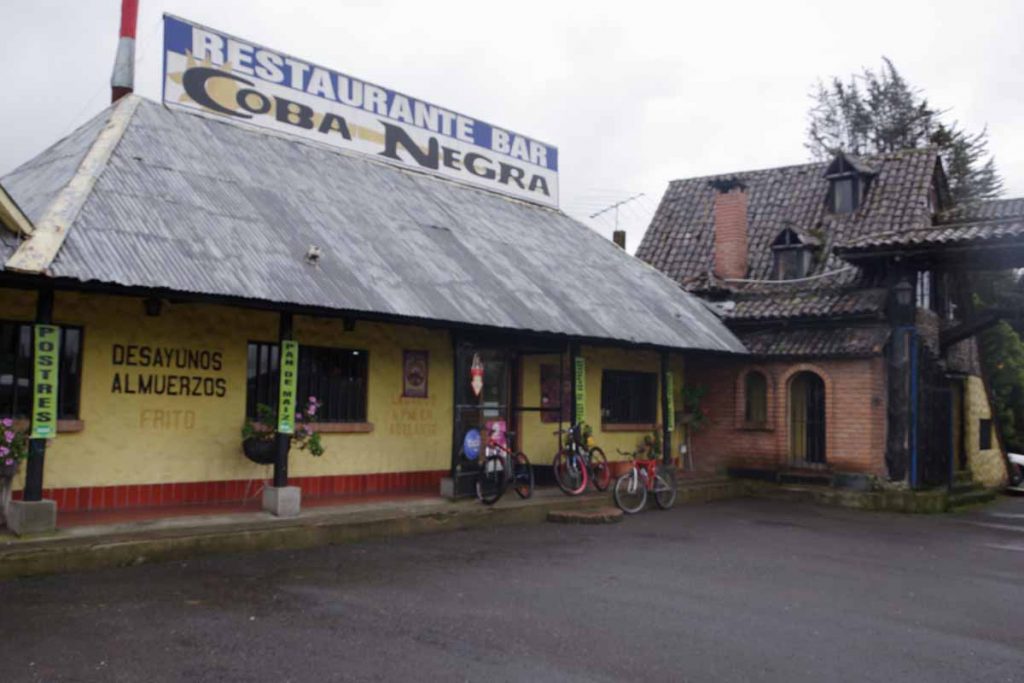 It was a Sunday and despite being overcast and dreary looking, there were plenty of local cyclists on the road. This was at the top (3174m, or 10,400ft) at gas station restaurant. Some local cyclists had also stopped here at restaurant. 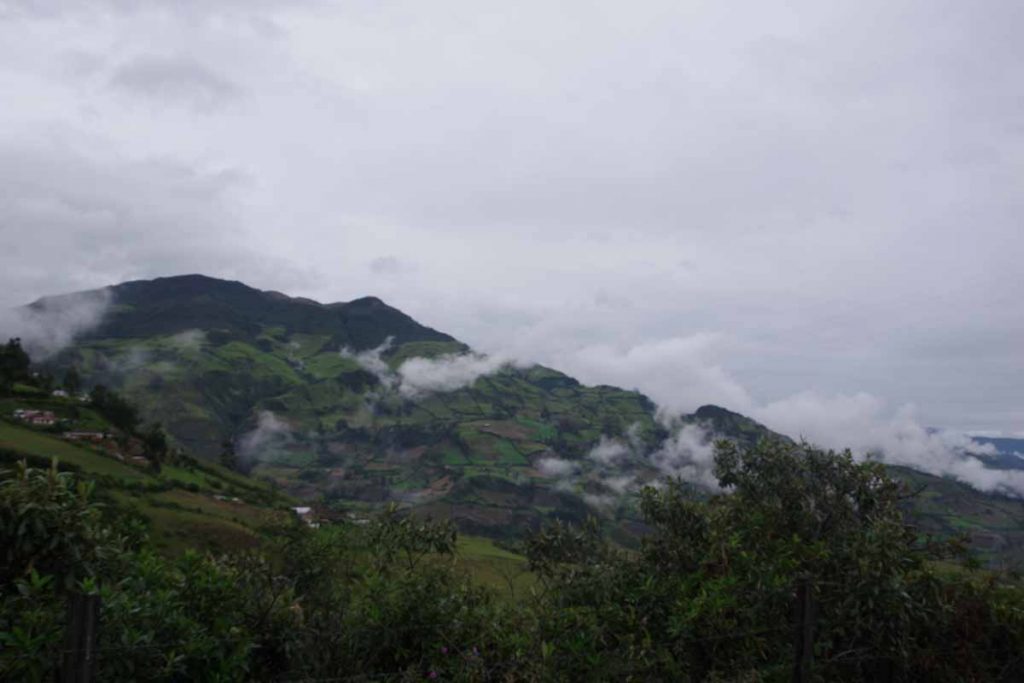 Now for the big descent. Across the way were these patchwork fields. 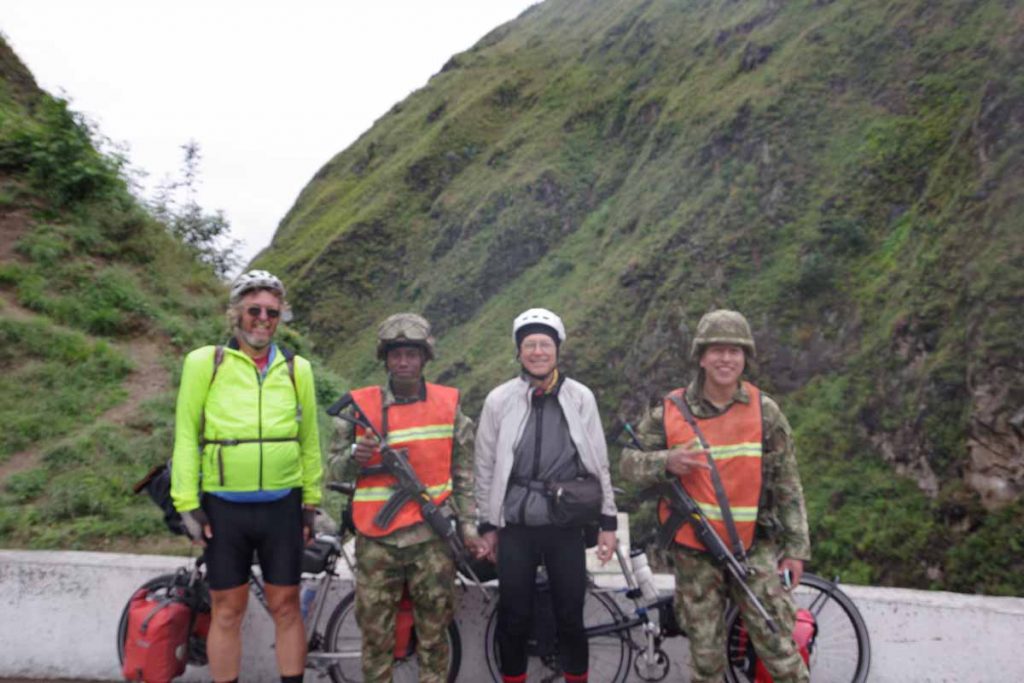 A pose with some friendly military folks. This part of Colombia from Cali south has had multiple spots where there were military stationed along the road. Often a “buenos dias” as we cycle past. 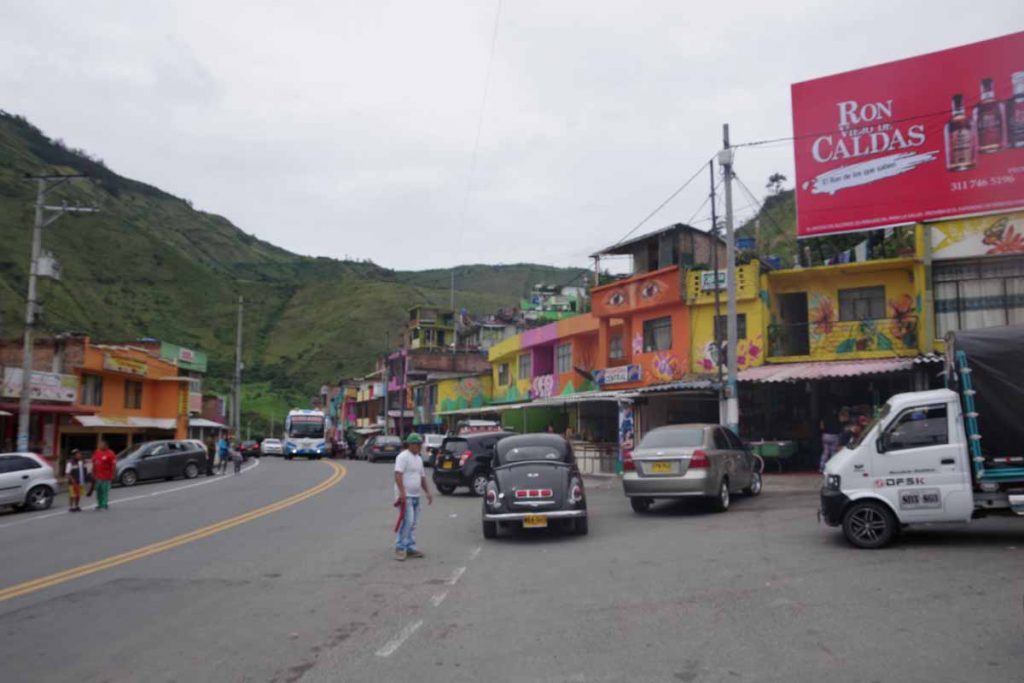 Very close to bottom is town of Pedregal, a popular stopping point for cycle tourists. We stopped here and had lunch. 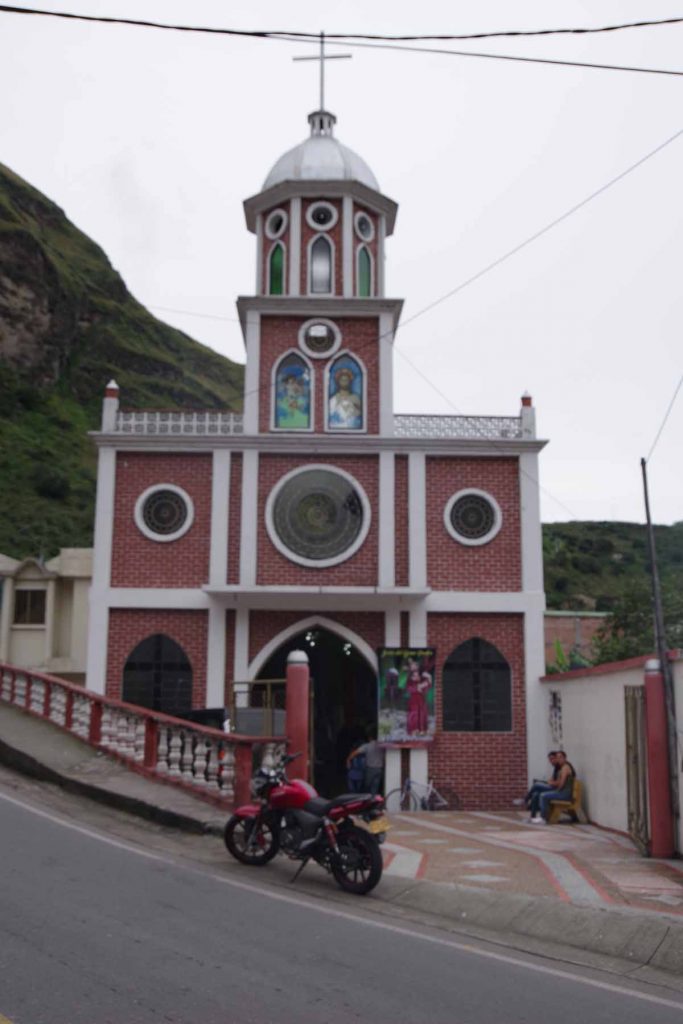 We considered stopping in Pedregal as it would be nice to be in small town with stores and similar amenities. However in end, went another 8km further to small guest house mentioned by another blogger. What sealed the deal for me was that Pedregal hotel didn’t have hot water. If I wasn’t going to have hot water anyways, then nice to get just a few kilometers fewer to cycle the next day. 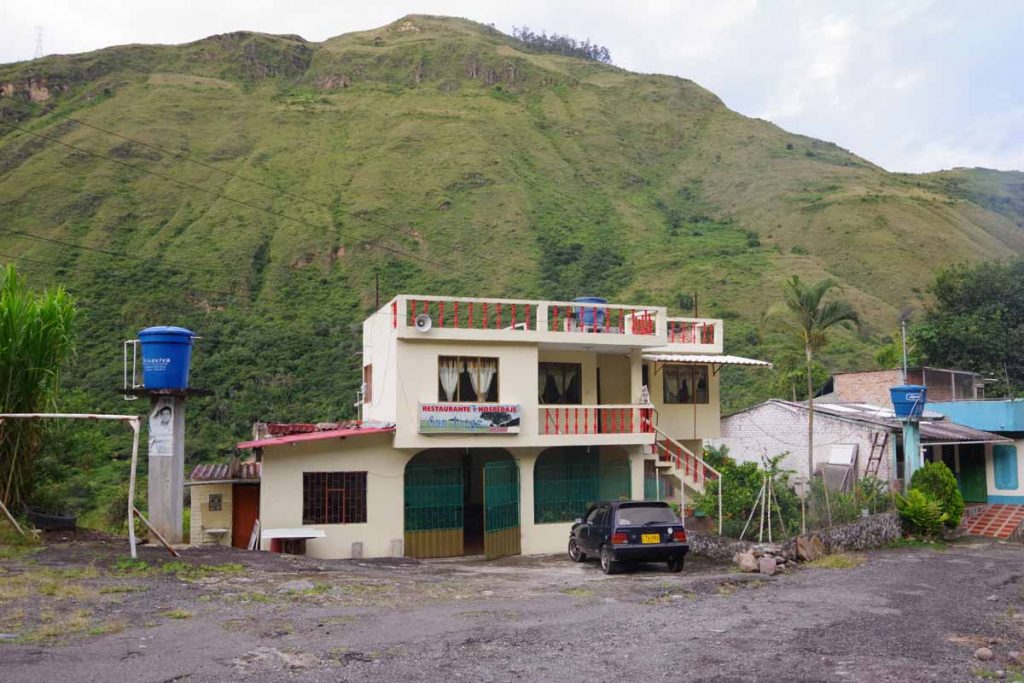 Hotel San Jorge was our spot. It was ~700m back to village of El Capuli. This was small enough that the restaurant didn’t need a sign. However, tourists like ourselves did need to ask.
Day Two
Today was a longer ride where we knew we had ~1000m of climb to reach Ipiales. It turned out we went just slightly further into Ecuador. 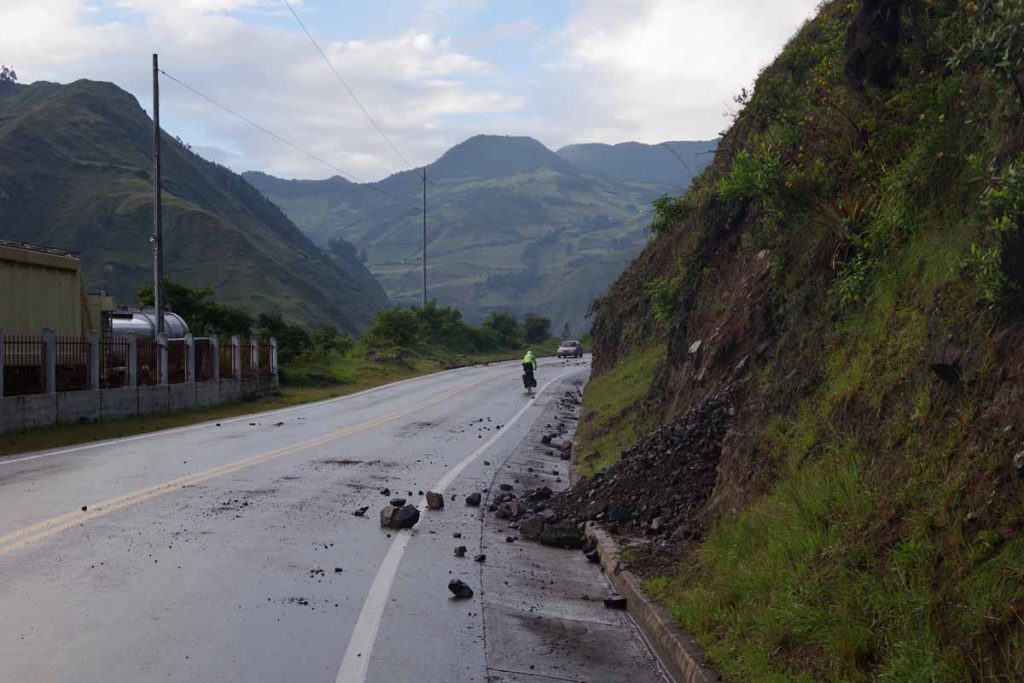 Today the climb was over a longer distance. Hence, there were sections of flatter/rolling terrain mixed with some solid climbs. One short and very steep hill mixed in as well. This photo shows a common issue, small rocks or sometimes landslides coming down the hills and onto the road. 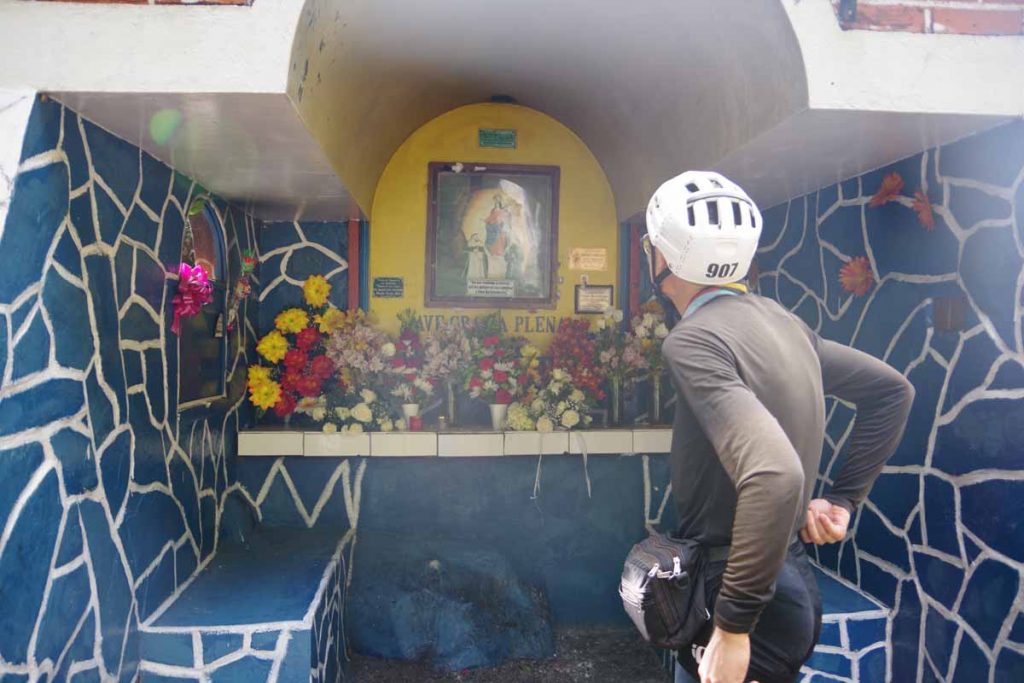 At 8km, there was a crossing as well as small shrine, complete with seating for six. Bert is checking out the shrine. 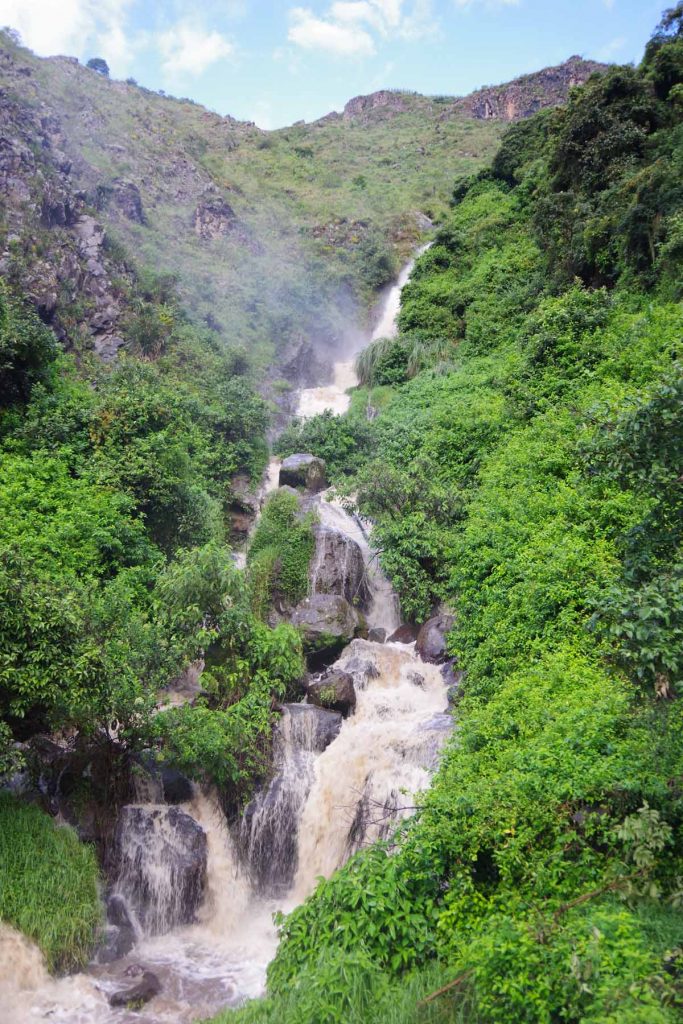 Pretty waterfalls the other direction. 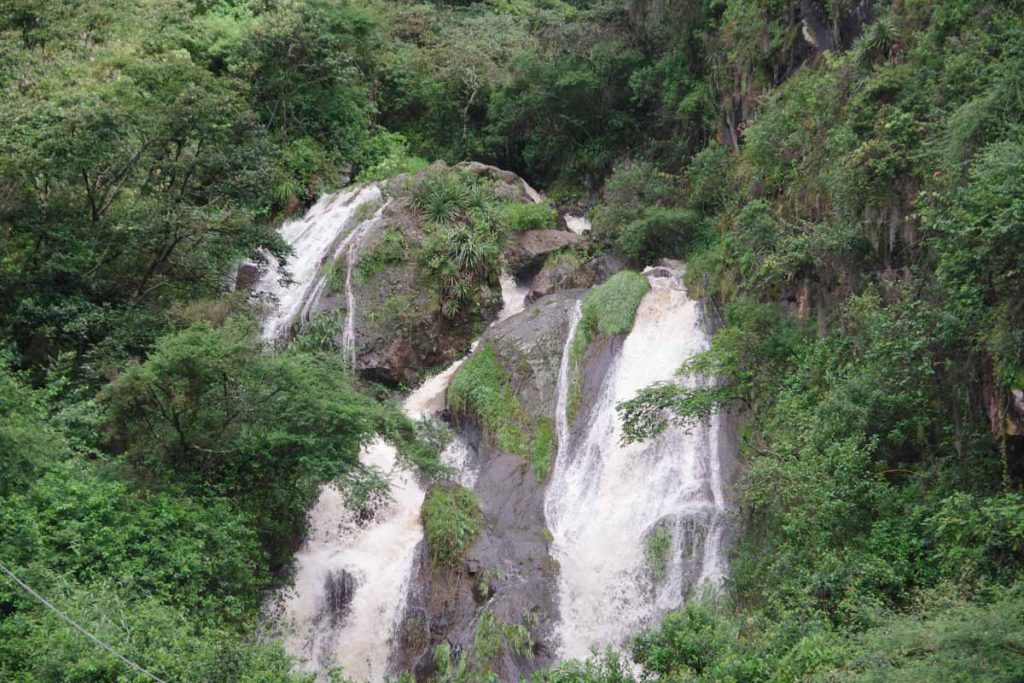 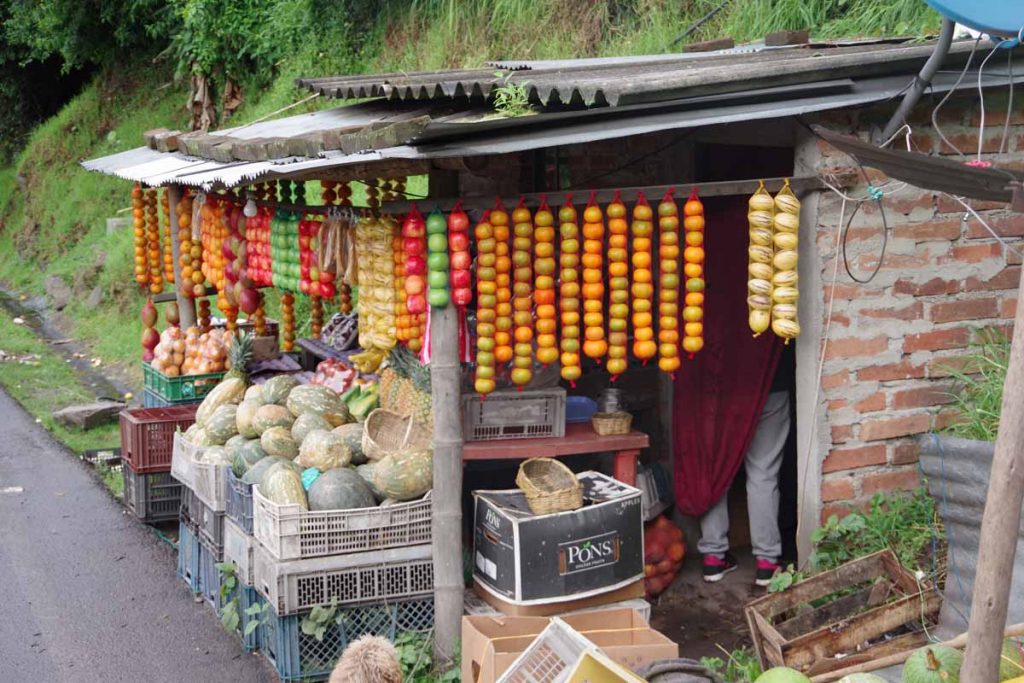 A small stand selling fruit and other things on the climb. 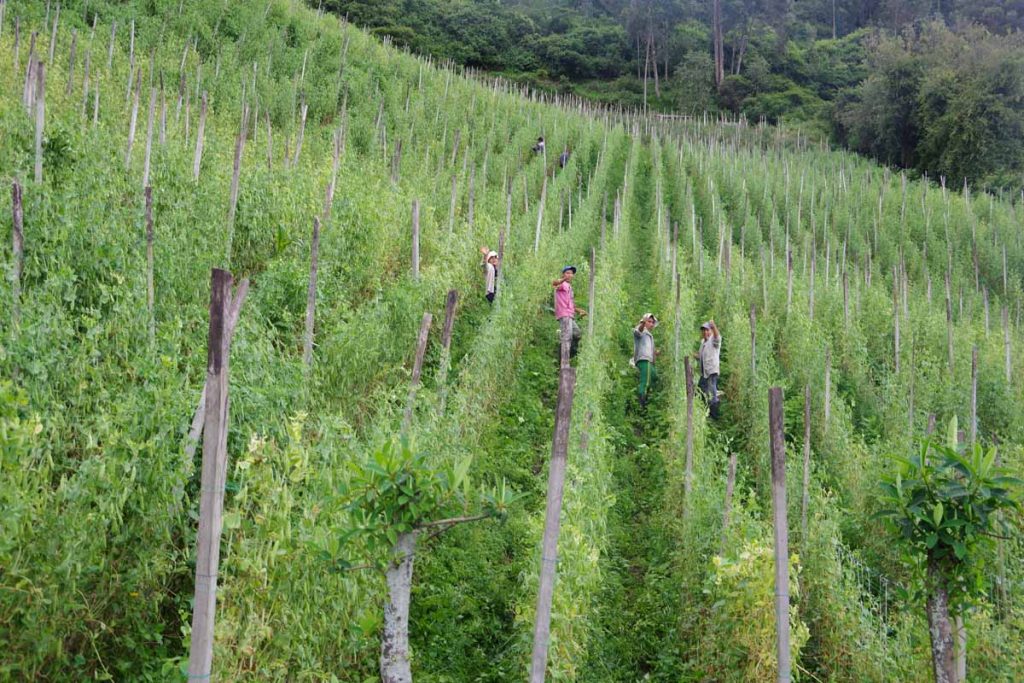 These guys were picking beans. The photo may not show it, but the field is moderately steep. 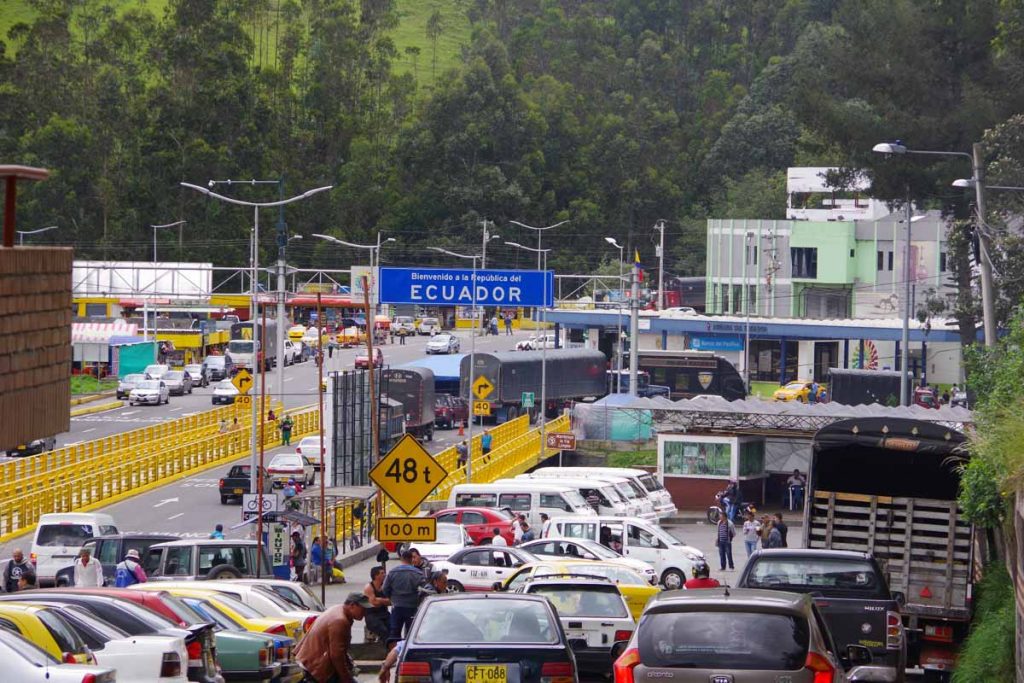 This brought us to Ipiales not far from noon. At this point we had a choice, try cycling to cross the Ecuador border, or stay here and cross early in morning. We knew the border was notorious for sometimes having long delays, so thought it would be good to use our afternoon time now.

Photo above is just after we exited the Colombian immigration point and not yet entered Ecuador. I’m not quite sure what I can photograph, so had this shot more from afar, but does demonstrate some of the chaos you sometimes see at the border. Also if you look closely, the bridge connecting Colombia with Ecuador has a signed cycle path.

Crossing into Ecuador turned out to be quicker and easier than expected. They gave me a 90 day visa, which should be more than enough since distance is shorter than Colombia and I spent 31 days crossing Colombia. However, better to have too many days than not enough. 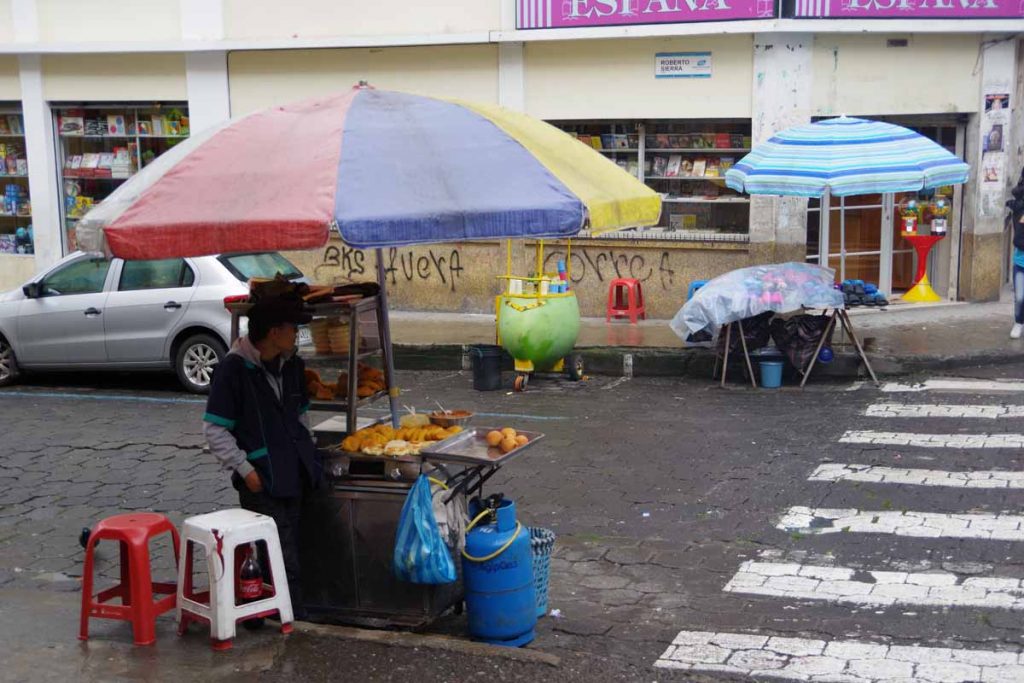 After the border there was a steep little climb before leveling off and not too far away was Tulcan the first larger town in Ecuador. We went to center of the town to find hotel with wifi and hot water. Also to see if I can find a SIM card for my phone. At the border there was someone hawking SIM cards, but it was of a small network, so not sure how good the coverage.

This was vendor on the street. 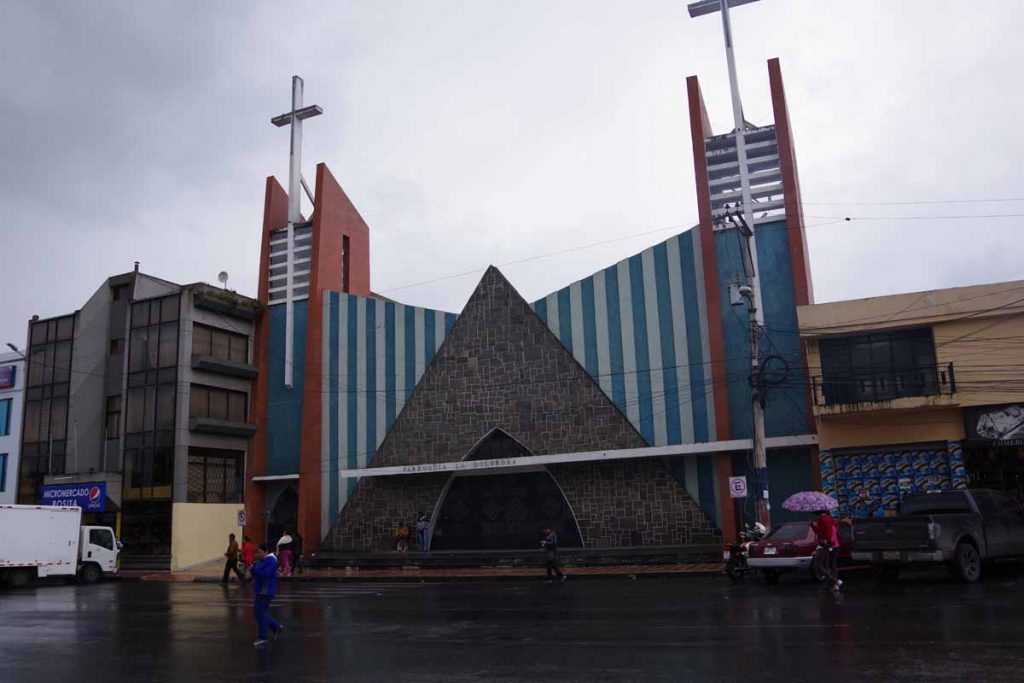 Church across from the plaza on main street. 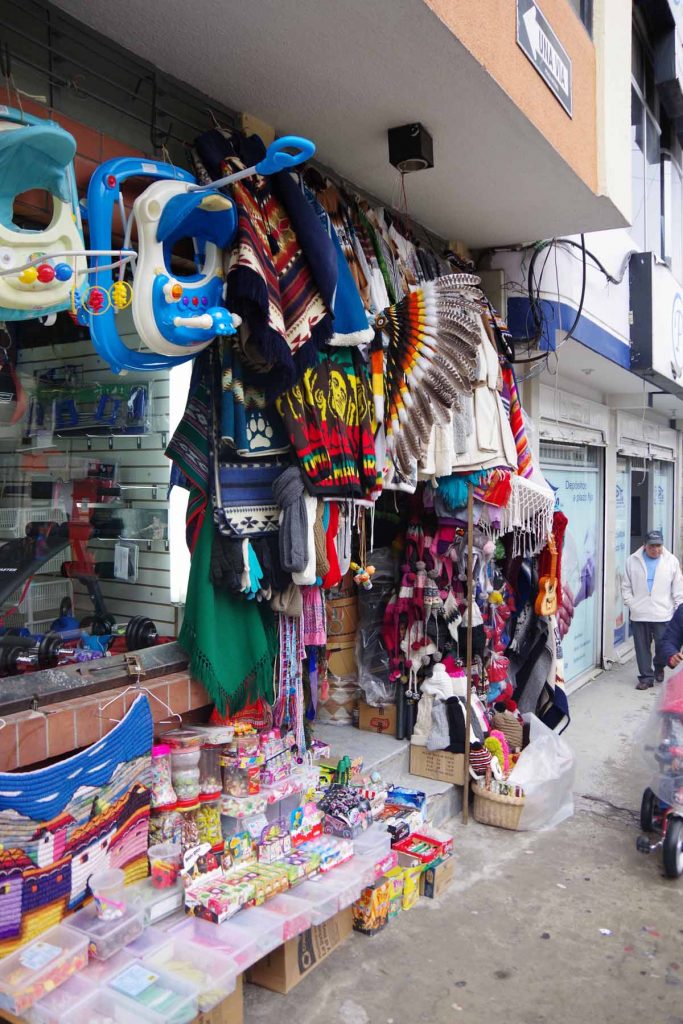 That thing with feathers looks like what we would have call a native american headdress. Not sure what the connection is here with Ecuador. Otherwise turned out to be slightly wet and soggy afternoon and so nice to have a reasonable hotel (with hot water!) here in Tulcan as we check maps for next segments on our way to Quito.

I ended up stopping at several shops on my way to buy a SIM card. Eventually found one and purchased a SIM card plus a week of service including 200mb of data for $3. Also interesting that in Ecuador they use US dollar currency bills along with their own more local Ecuadorian partial dollar coins.