Two rest days in Quito and chance to take a short break from cycling. 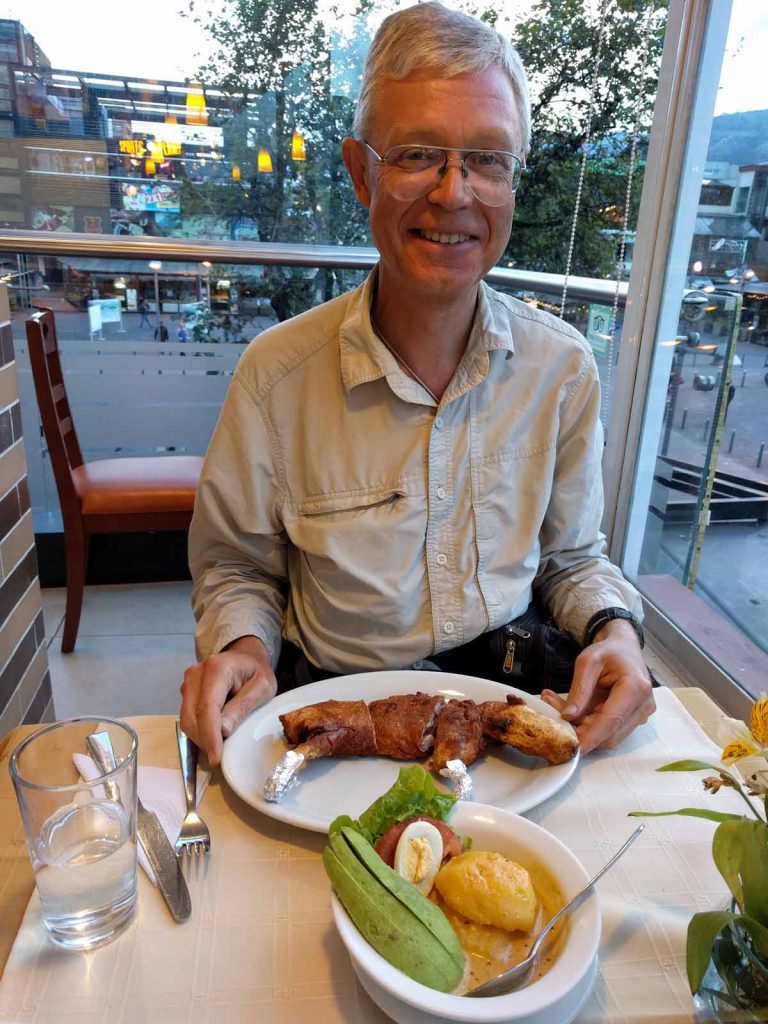 I stayed with more standard and basic fare. My body was recovering from a few things: GI tract still adjusting to food or water or something. A little more concerning, but looks to be on the right track was I had developed a saddle sore that had become infected. It was hurting the two days riding into Quito. I guessed a day of rest would help and also from internet learned that my malaria medicine (doxycycline) was sometimes prescribed as an anti-biotic. So followed instructions for doxy as if I would enter a malaria region (only found below 1500m in Ecuador).

After first rest day, the infection wasn’t much better, so we found a local clinic for a consultation. That was its own adventure but reasonably efficient. First had picked out something from internet but our hostal owners said it was now mostly for older Ecuadorians on their equivalent of social security. However, they had a recommendation. First place was an emergency hospital but guard was able to recommend a second. A short wait and was seen by a doctor who cleaned things up further with anti-biotic wipes/cremes and confirmed my anti-biotic medicine choice and suggested anti-inflammatory as well. Today was feeling much better when we departed. Now will need to be careful in next days (and rest of trip) to not have relapse. However, overall was good choice to take that break and Quito was the right place. 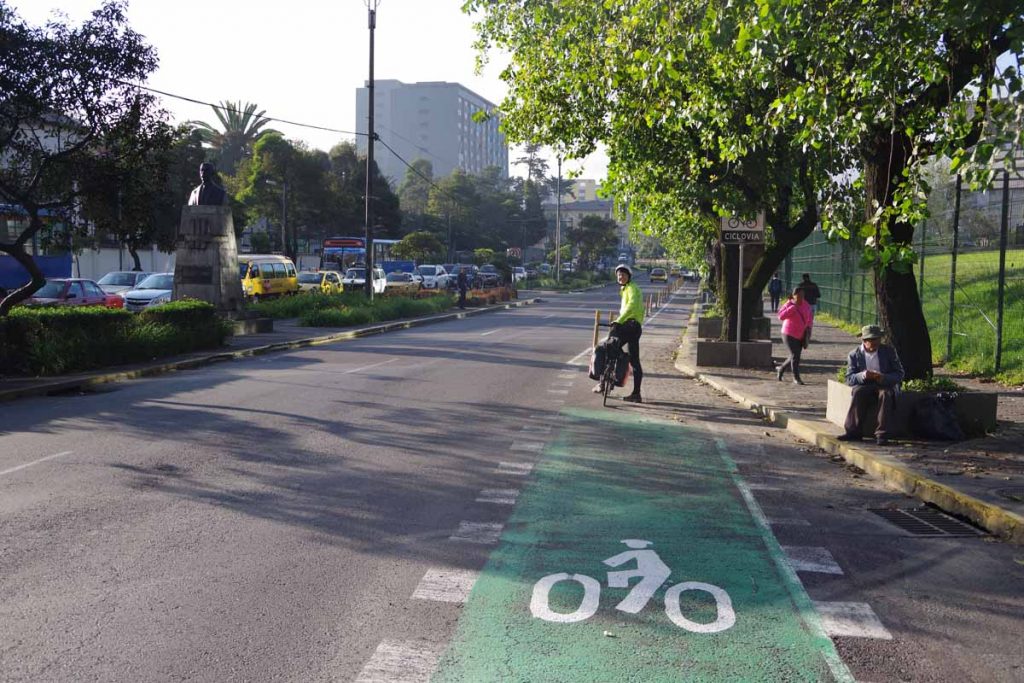 Today we had some busy roads getting out of Quito. First was local city streets including this short stretch of bike path. 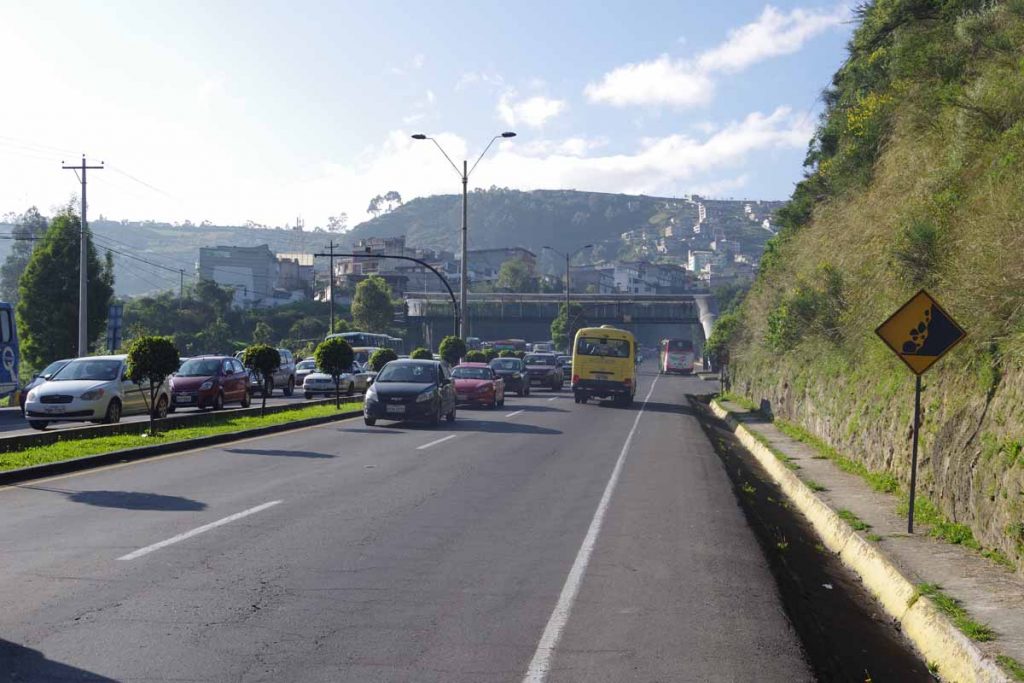 Leaving the city, the highway became considerably busier. We were headed “outbound” but as you can see from photo above, they had switched one of our lanes to now also come inbound. However, after 8km, we were on different highway, still busy but no longer as congested. 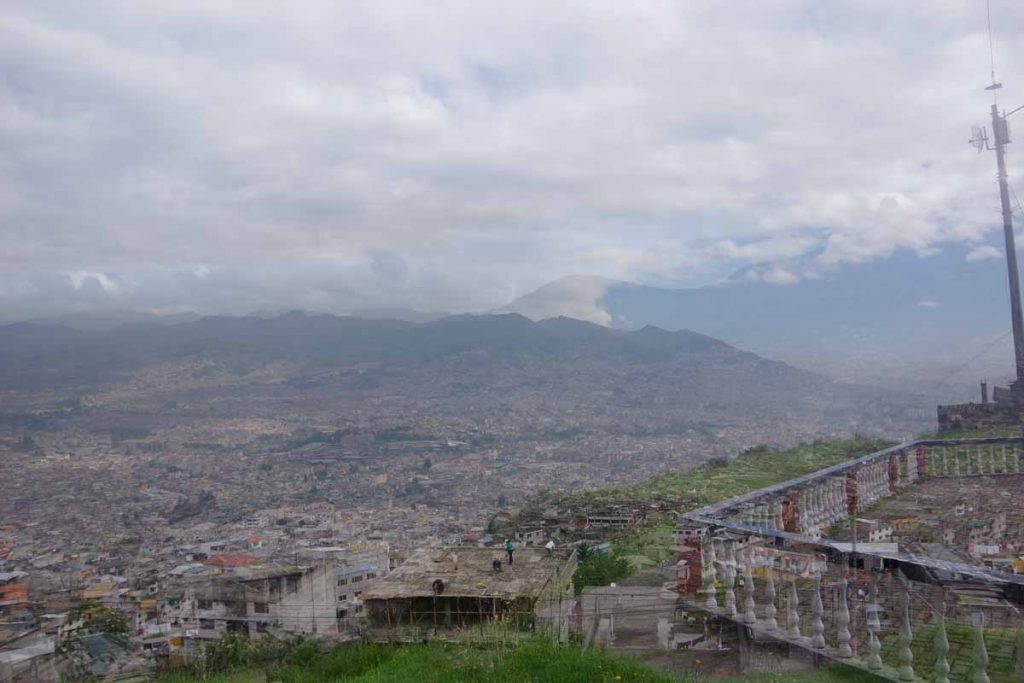 We climbed including past some overlooks with good views of the city. 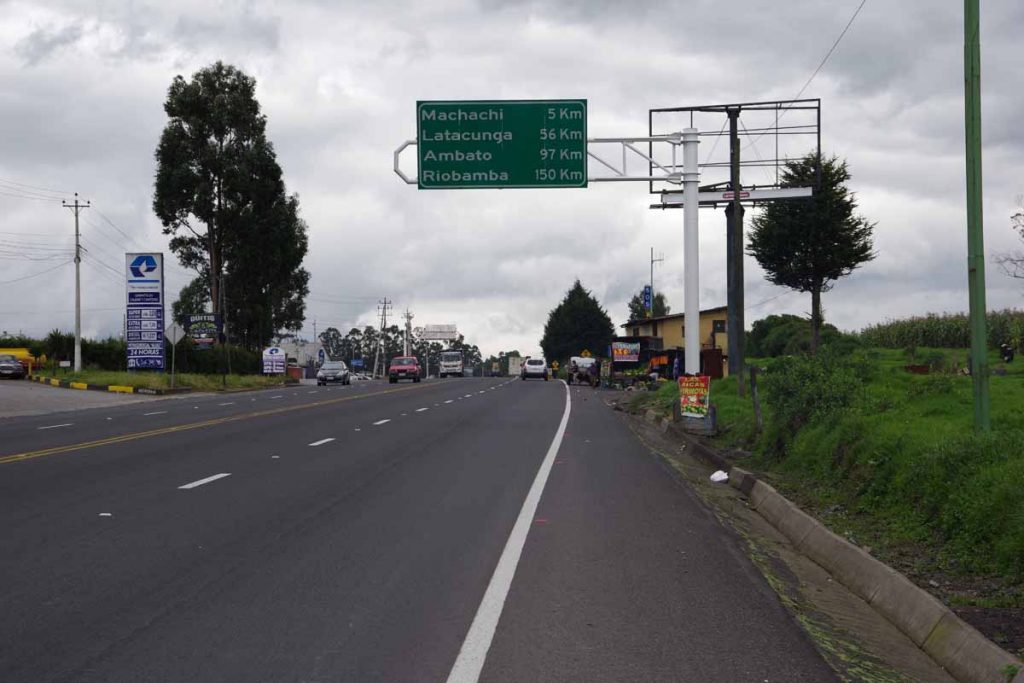 Eventually on the main highway. Sign above not far from Machachi and shows good list of upcoming cities on the highway over next days. 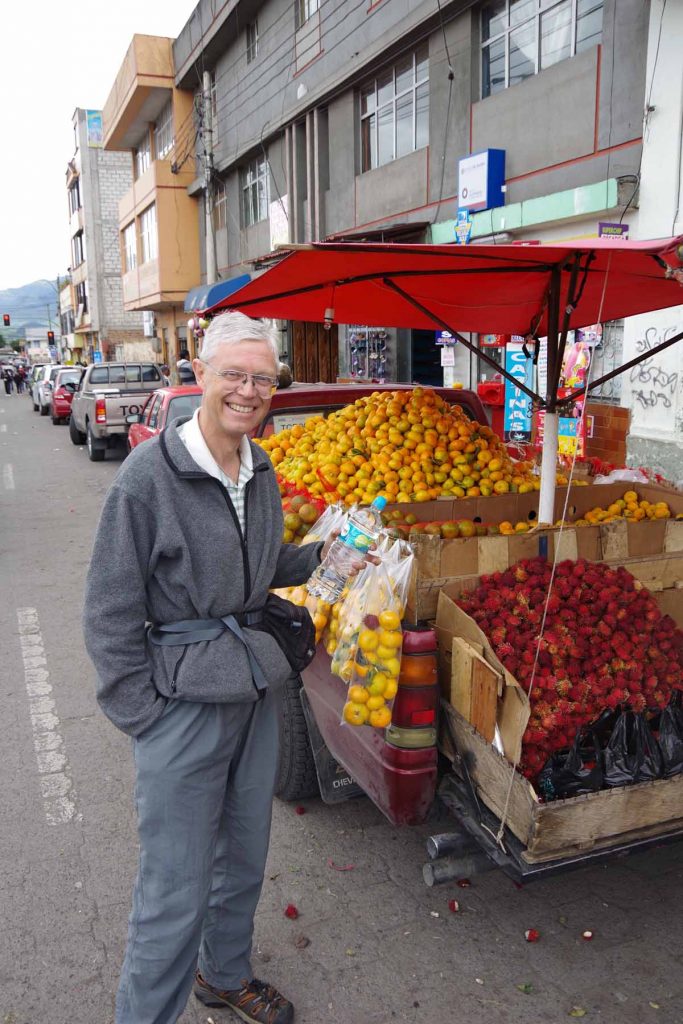 Once in Machachi, we found a reasonable hotel and went out to get lunch. 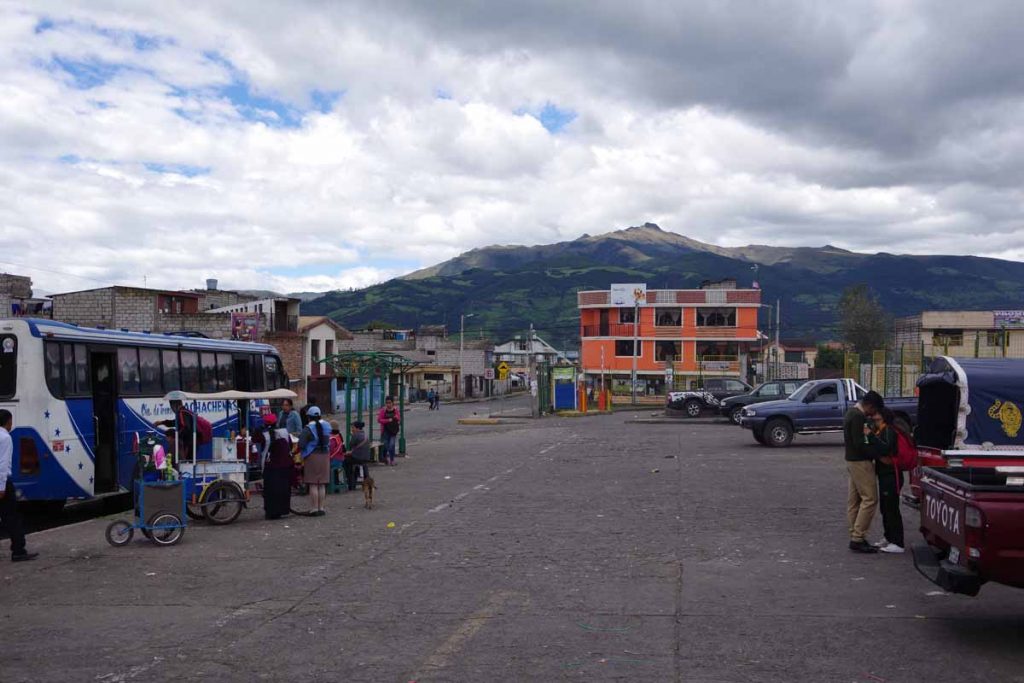 Photo above actually our hotel, but also taken with slightly larger perspective to show one of the volcanoes in the background. There is a tall volcano, Cotopaxi, not too far from here but we haven’t seen it yet. 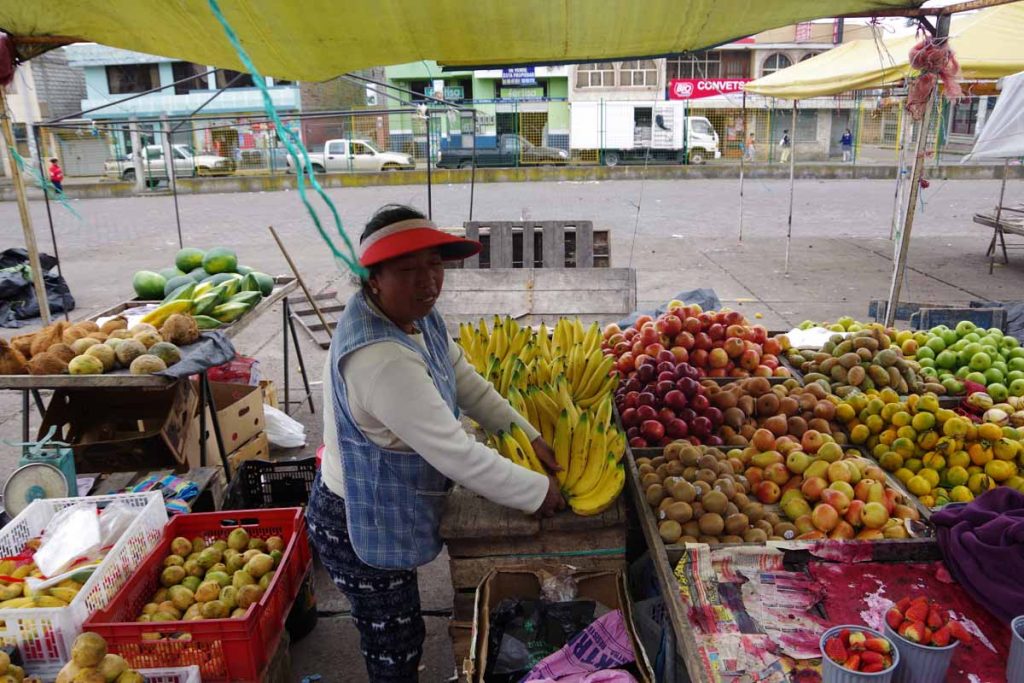 Banana’s not too expensive here at $0.50 for five bananas. Have bought them even less expensively but this was still reasonable price.

Overall plan is for Bert to join me in first part of tomorrow, but once we reach top of the hill, I’ll go over on to next town and Bert will turn back headed towards Quito for next part of his trip.