Climbed a mile today, 5300ft/1616m. Overall a beautiful ride as the road skirted around edges of steep valleys. 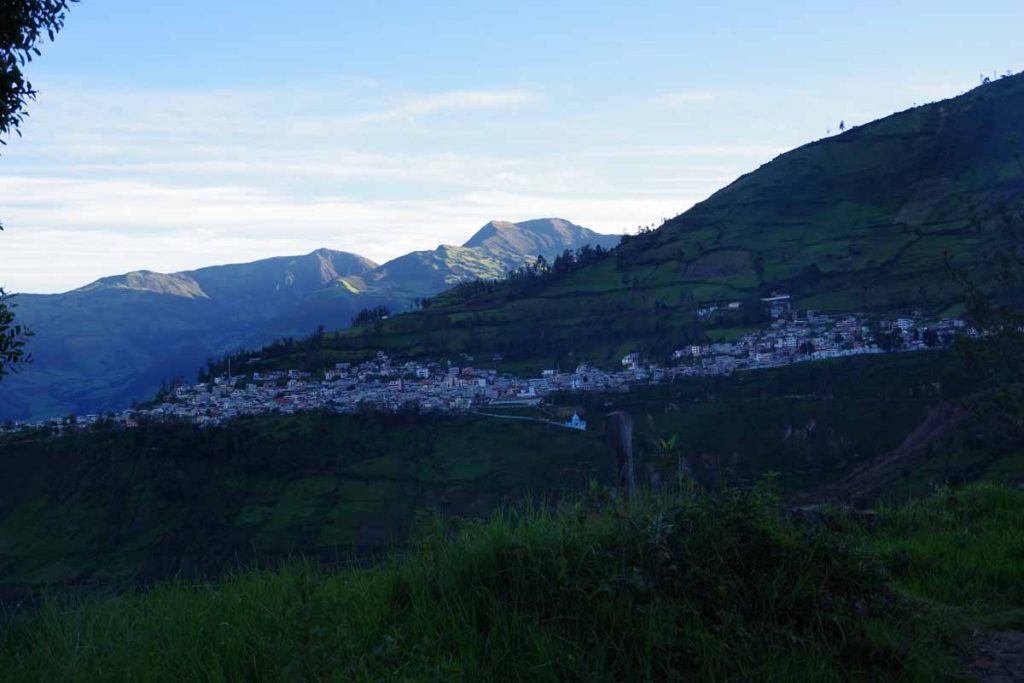 I was on the road early since I expected a lot of climbing. Not far out of town I went through a chain-link fence gate which seemed strange. The road went down out a valley and then slowly came back on the other side. Photo above is Chunchi from perhaps a kilometer away, though I had already cycled five kilometers along the valley edges. 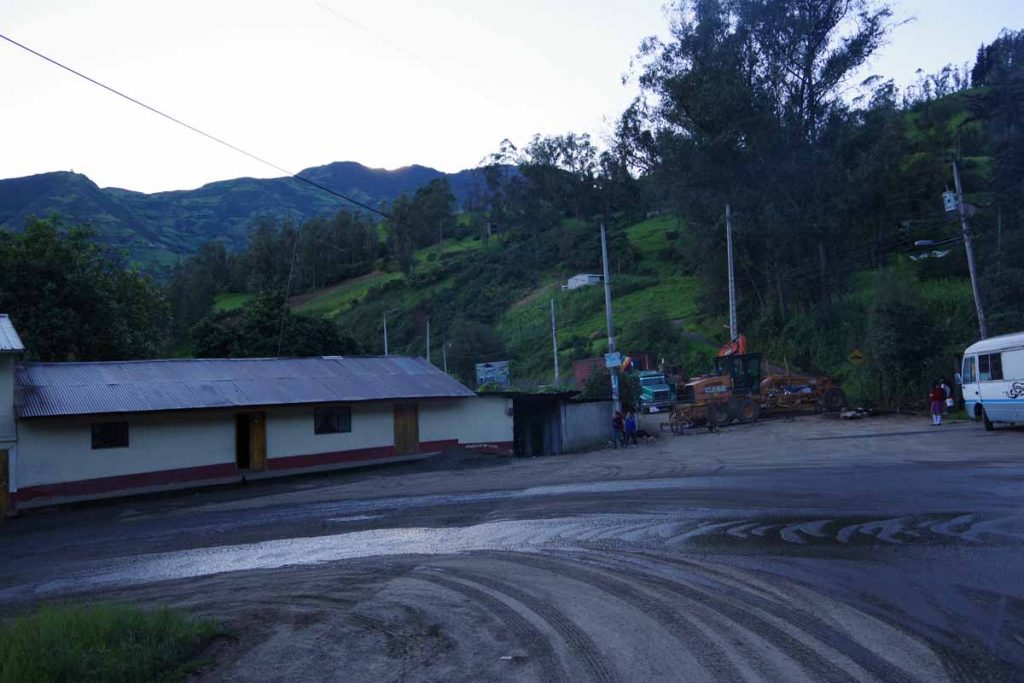 I soon discovered the other half of the chain-link fence. In photo above there is a fence with large piece of construction equipment parked behind it. Apparently, the main road was closed off for construction with a detour. Easier to see from this end, where it would be tough to accidentally go through the fence. I do think I saved some climbing as the detour much have gone through the valley where it is even deeper. 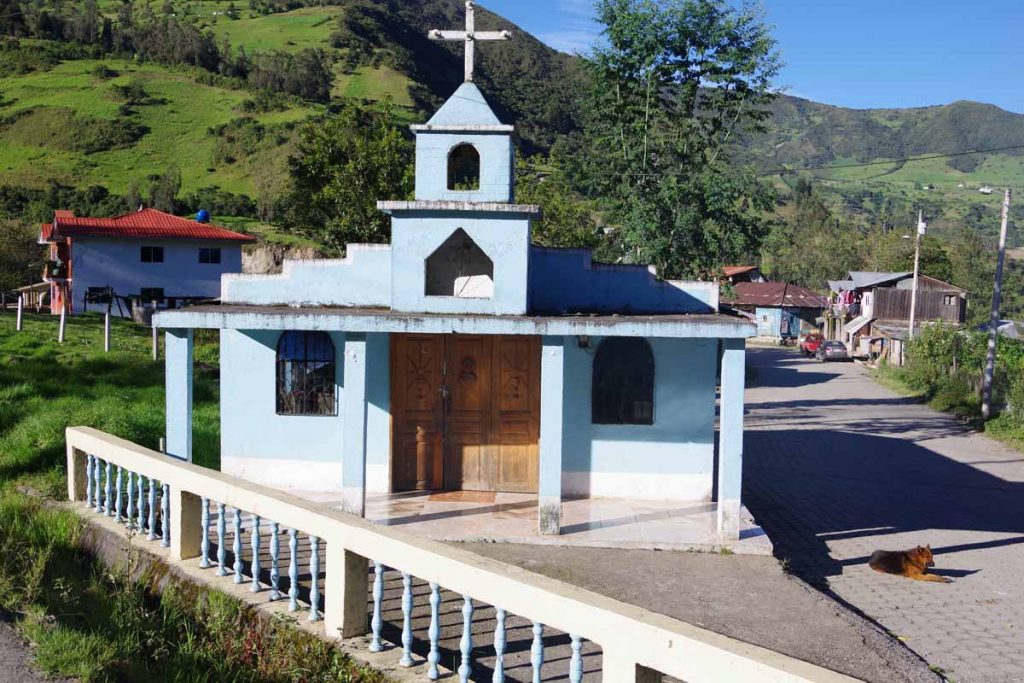 A small church in one of the villages I passed. That restful dog to the right is deceiving, today I had quite a few barking dogs come out to meet my bike. Almost all of them were just making a lot of noise and running along, though one dog did decide to bite my pannier. 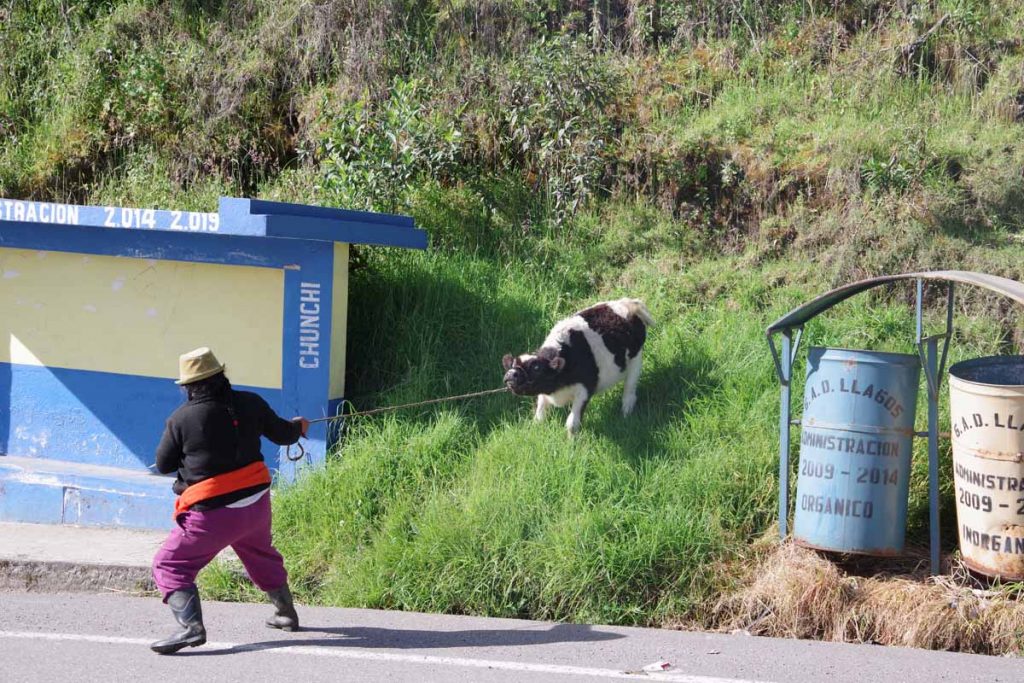 This cow did not want to be led, eventually it gave up and came along. 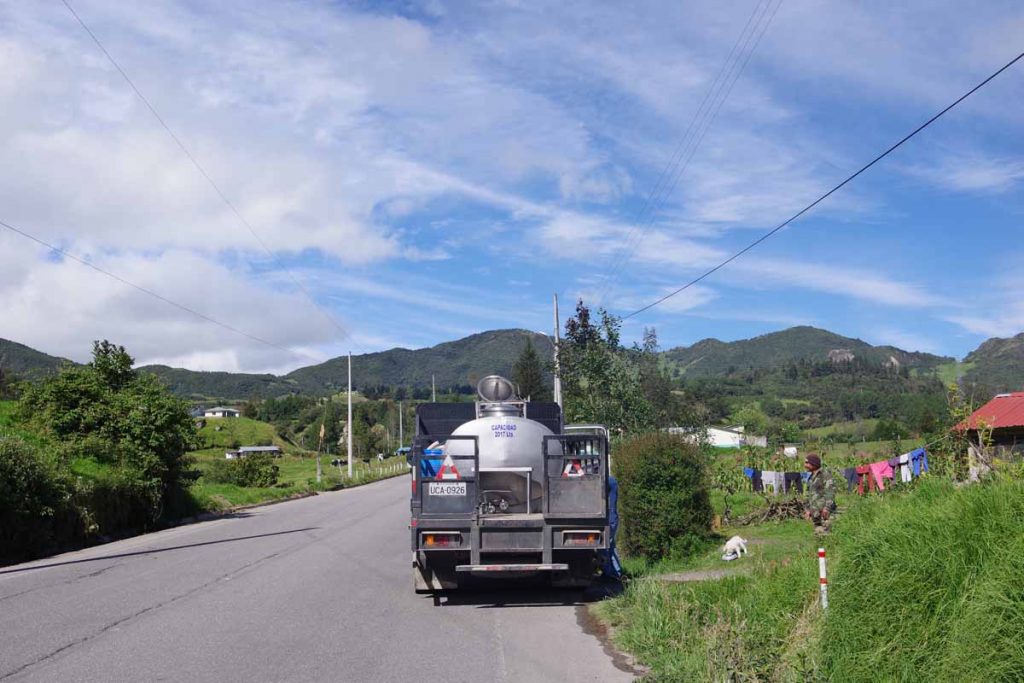 The truck was doing a milk run. It stopped ahead of me and met someone with a large container. The top went open and contents were deposited into the tank. 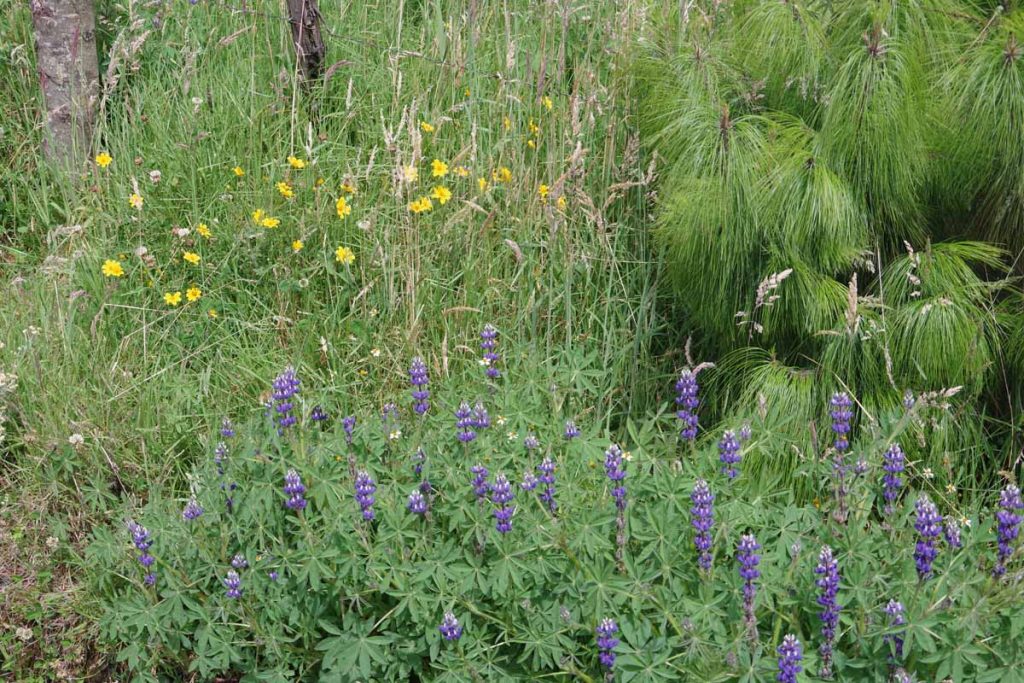 Both these purple and yellow wildflowers are common here. 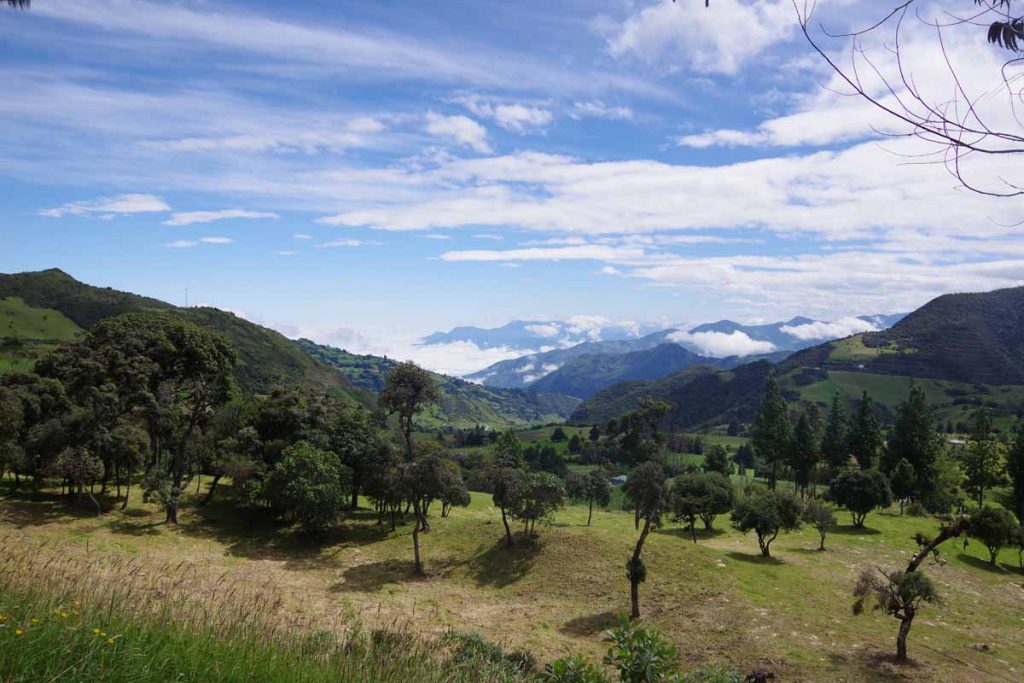 This was looking down into the valley and beyond, with clouds below. My route went from 2240m to 3080m (10,100ft) today. I got the sense that it wasn’t too far west to descend down to the lowlands. I’ll be up at this altitude for a few more days before descending to the coast. Expect it to be warmer, flatter and a lot windier. 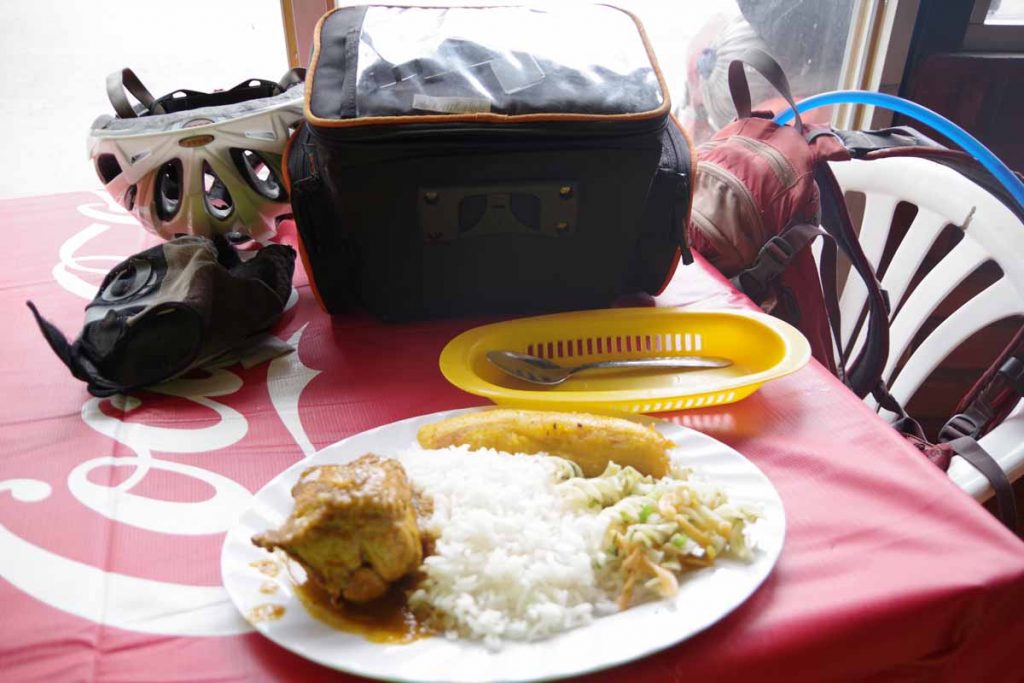 At 42km I came to Zhud and chance for lunch pictured above. This crossroads town featured in several blogs I had read as wasn’t clear if there was a hotel or not and by now there was already a lot of climbing. It was still early in the day, so made sense to go the last 18km over a few more hills to El Tambo. 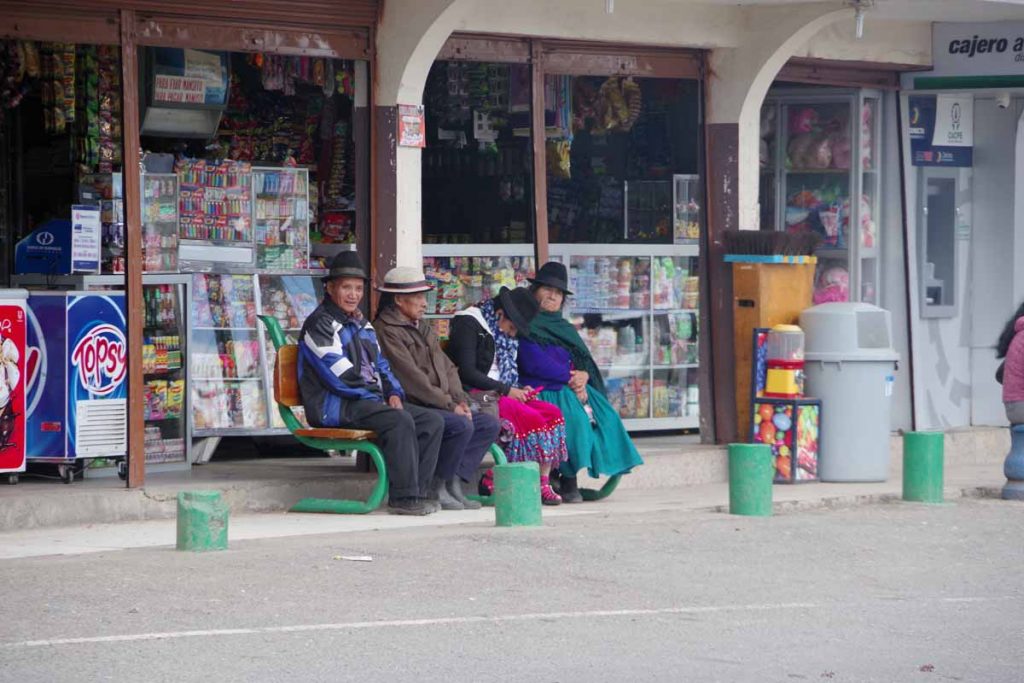 Ecuadorans on a bench.

Got into El Tambo not too late and found nice hostal. Time to relax after a good day of climbing.