Today was tougher than average. 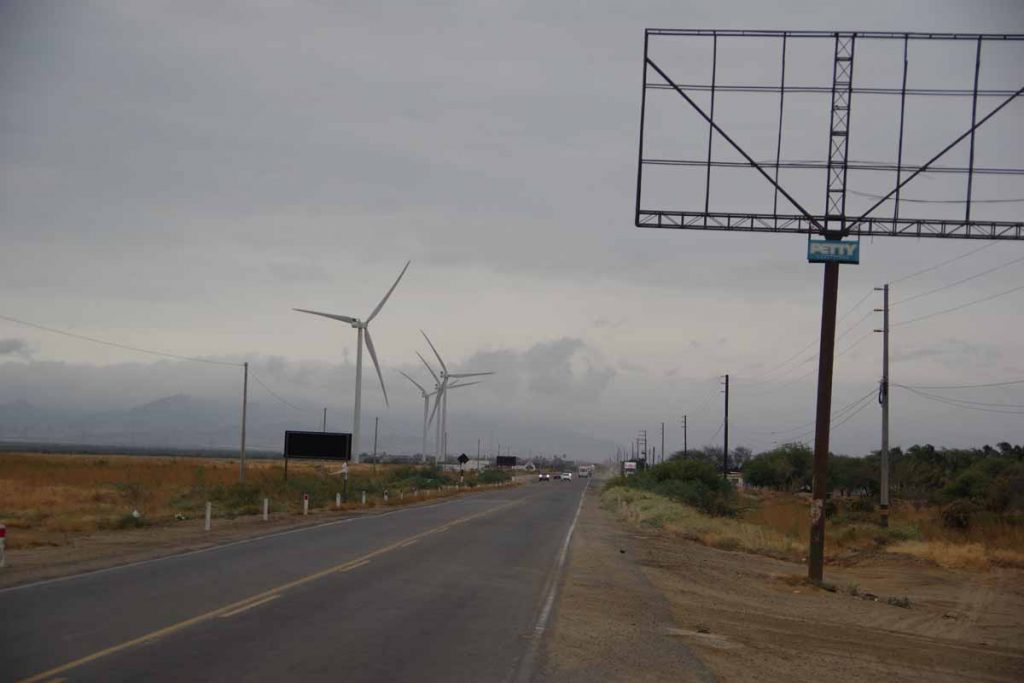 I was up early and on the road before sunrise. My hope was to get some distance before the wind picked up. However, it was already blowing when I started and really didn’t let up or get stronger all morning. I slowly climbed the hill and cycled back to the junction. It was mostly cross-wind here but after the junction it looked like 50km of directly into the wind.

My front tire felt squishy. Stopped and fixed a flat. Looks like I ran over a thumb tack. Cycled down the road and front tire was squishy again. Sigh, not sure what happened, but stopped this time next to a wind farm and replaced the tube. After that, the front tire held. 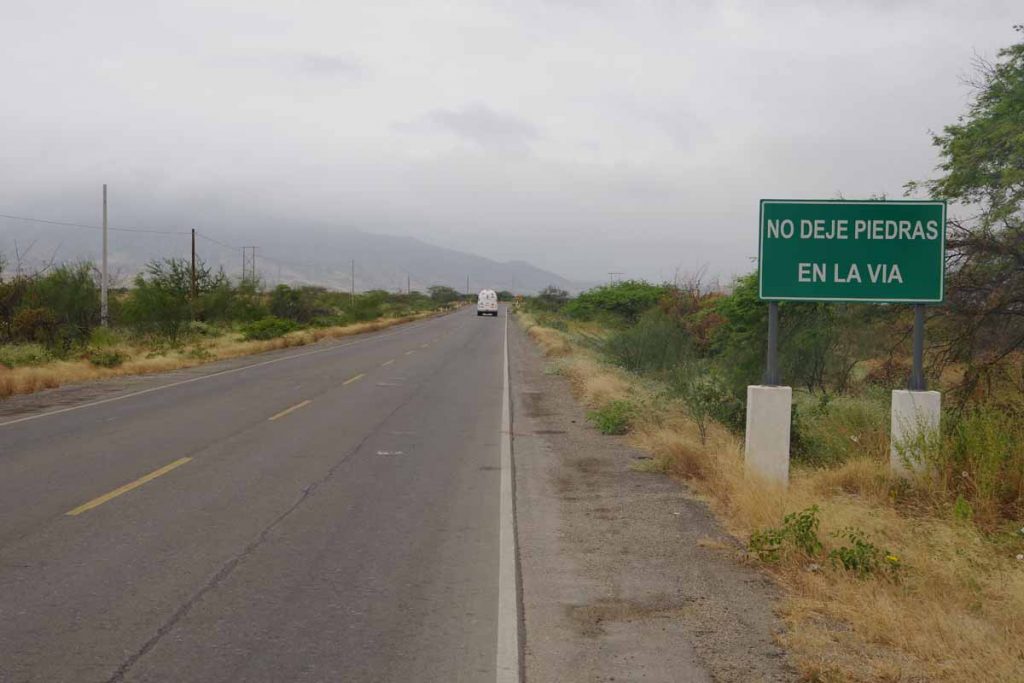 Sign tells us to not leave rocks in the road. I say that goes for thumb tacks as well. 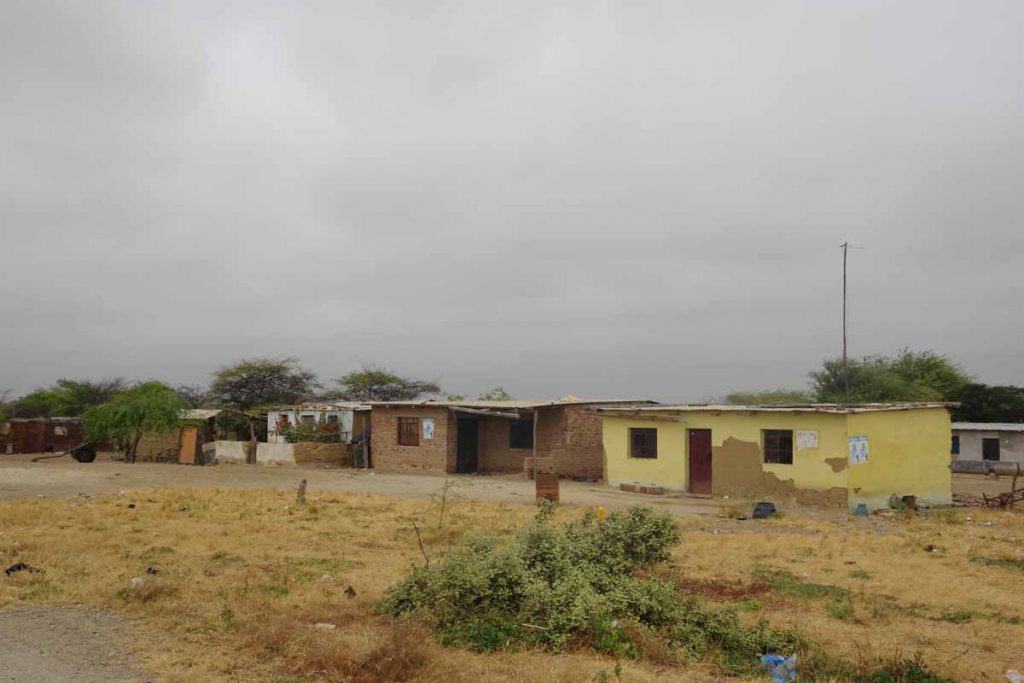 This first section looked pretty bleak, here was a typical house I saw along the way. 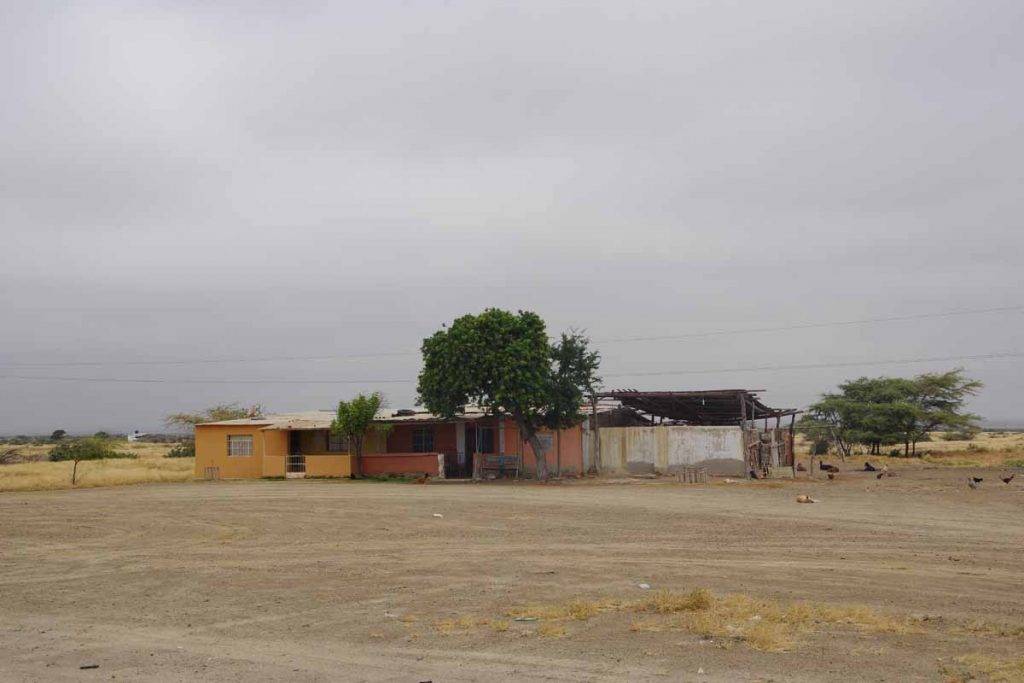 Here was a another house. Some of them were inhabited because I could see chickens around as well as sometimes dogs coming out to bark at me. The headwind continued here and I was riding perhaps 12km into the wind, hoping the wind didn’t strengthen and calculating that at 60km mark the road would make slight turn away from directly in the wind. 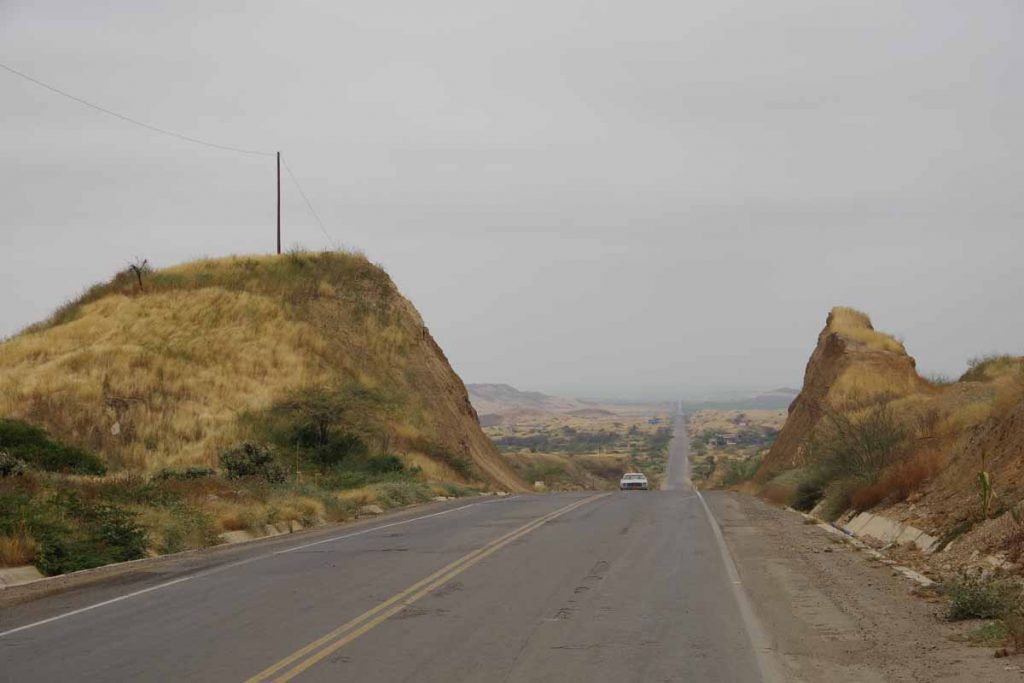 Somehow around 40km I crossed one or two little hills and surprisingly the wind also started to become less. Hooray! This next stretch started to have some irrigated fields and even saw sugar cane in one of them.

At 58km was the promised turn and just thereafter a small hamlet of San Pedro. I stopped here for lunch. 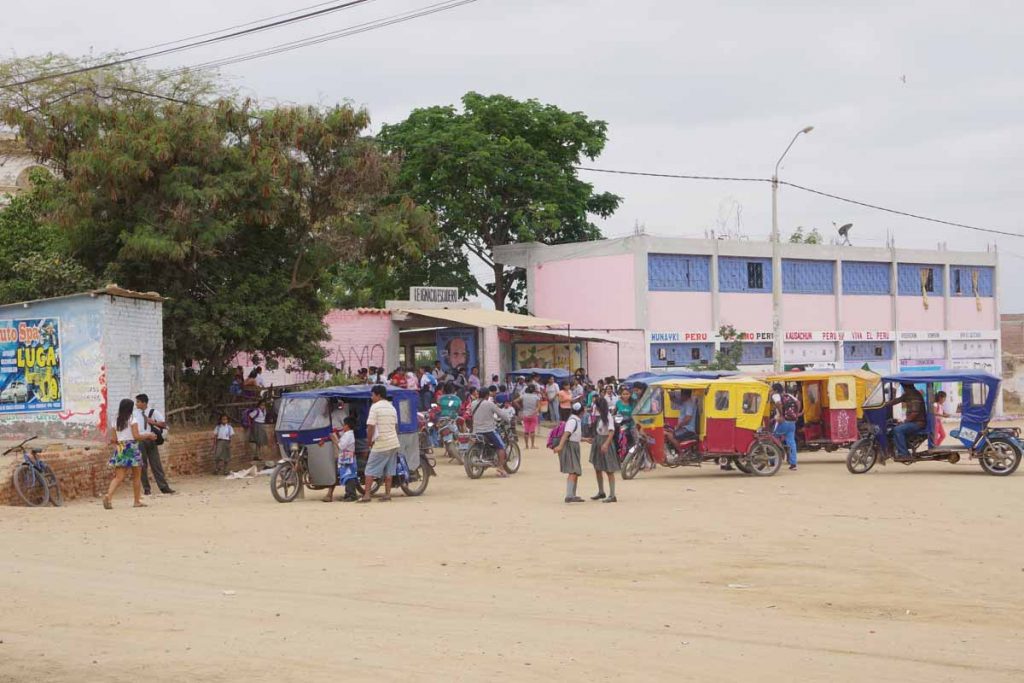 There are many of these “moto-taxis” here in Peru. Not quite like the three wheelers in India, but similar. Seem to be built around a motorcycle with back wheel replaced. This collection was picking children up from school just as it let out. 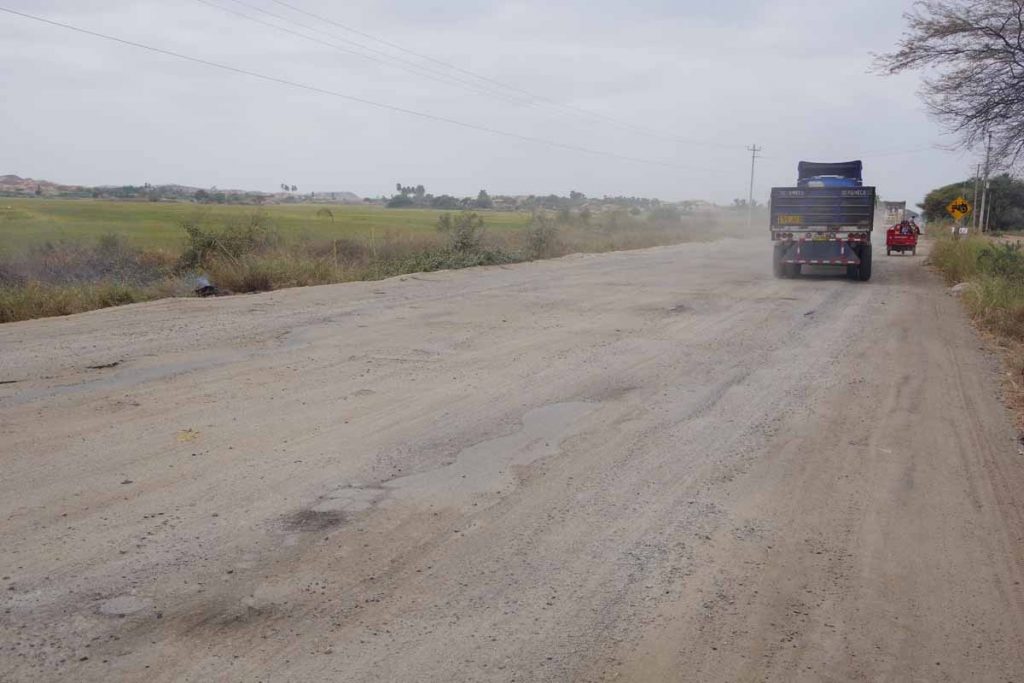 After San Pedro the road became really rough for a while. I also then noticed my rear tire going squishy. Stopped and fixed this flat as well. Not quite sure what caused it, but I had put in a boot after a flat in Ambato, Ecuador since there was a hole that went all the way through the tire. The problem here wasn’t at this hole but along edge of the boot. I patched this one as well and held for rest of the day. 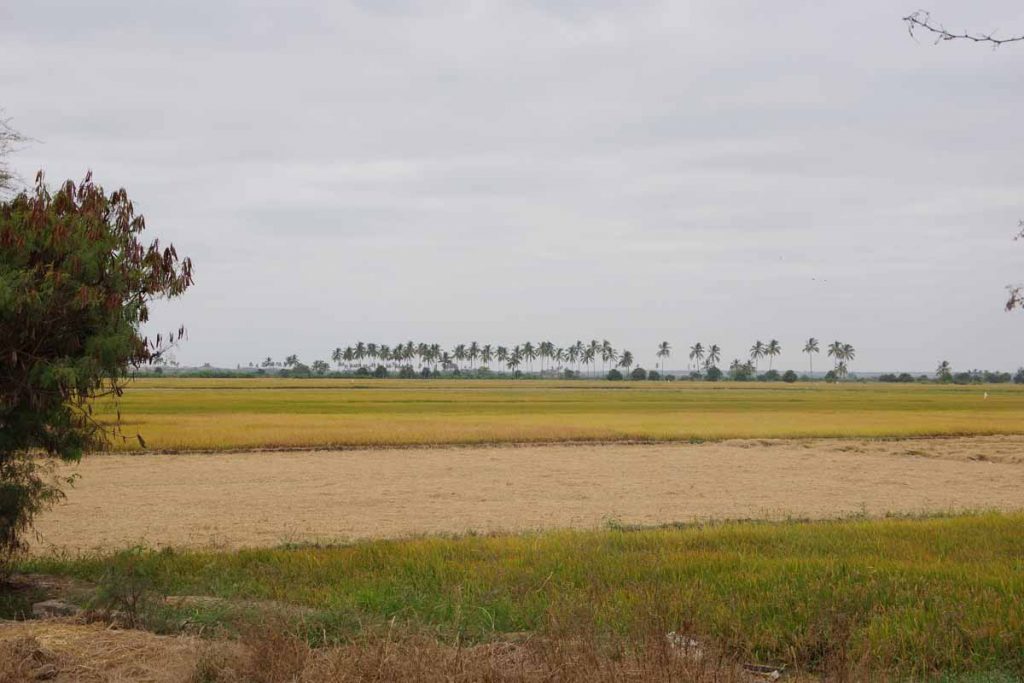 More crops along the way. After this stopped to check out a hotel at the 80km mark. It had neither wifi nor hot water so decided to cycle just a bit further and into middle of Sullana. Busy town and my room faces the street. Can hear a lot of honking and other street noise, but nice to be right among stores and restaurants. Tomorrow plan is a shorter day to Piura.