Today I cycled across Paijan, a town with particularly nasty reputation for bicycle robberies. Took some precautions, though no issues seen at all. Will continue to be cautious from here on including some upcoming hot spots, but nice to get past Paijan. 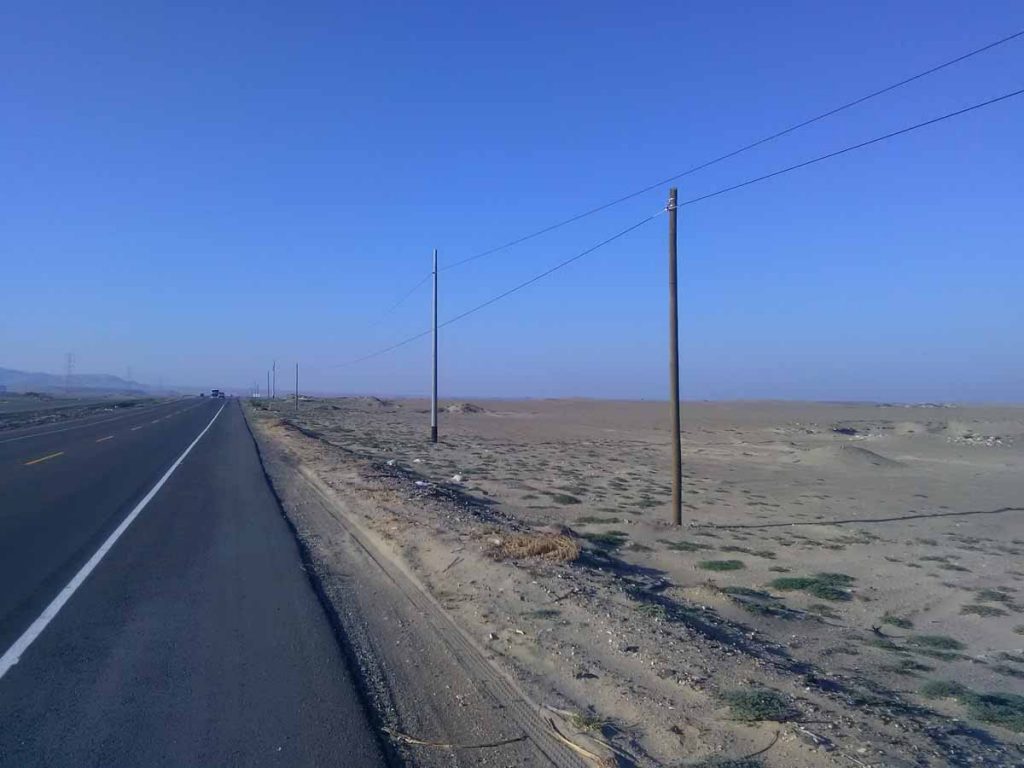 What is the problem with Paijan?

Prior to this trip, I read multiple books and blogs and kept note of potential safety areas and other danger zones. By far, Paijan bubbled to the top as a town notorious for cycle tourists getting robbed. Most of these events occurred between 2006 and 2014. There was one account that might have been 2016, though it wasn’t clear. The general pattern was that cycle tourists would come into Paijan and on their way out would be followed by a moto-taxi or two and the robbers would try knocking person off the bike, dragging them into sugar cane and then robbing their belongings. Not a pleasant prospect and something that seemed to get discussed on cycle forums as well.

So what did other cycle tourists do as word spread about Paijan?

It was a bit random and I couldn’t find much in way of accounts newer than 2014, so not sure if problem has diminished or just a lot fewer cyclists coming through.

I looked at what others had done and written and decided I would arrive in Paijan as early as I could and then when I found police, strike up conversation and ask for an escort if necessary. I also stashed away my camera until after Paijan, so photo above from my cell phone was only one I have before reaching the town (though a lot of it looked like the photo).

The first forty kilometers looked a lot like the photo above. After San Pedro, I quickly came into dry bleak desert areas. There was some head wind, though nothing too bad yet. Also some areas with drifting sand dunes across the road.

I reached edges of Paijan around 9:30am. Sun was shining and it pretty much looked like any other little town I had seen. I did pass three parked police cars but didn’t see anyone so kept going since figured there would be police station later. There wasn’t a lot of activity in the center and before I knew it I was already on my way outbound. I never quite saw the police station and quickly reached edges with sugar cane fields. There were some workers and road construction and before I knew it I had gone 60 kilometers and was in Chocope, the next town past Paijan. All nice, calm and anti-climatic from all I had read before, however I am also not complaining. 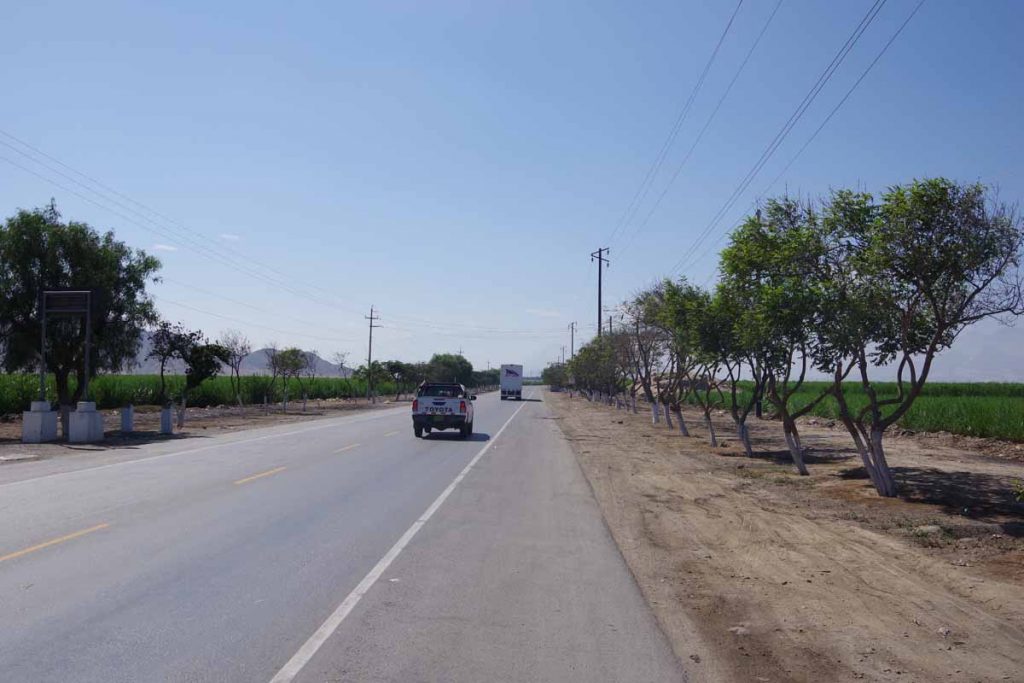 Here was what road looked like leaving Chocope once I pulled my camera back out again. 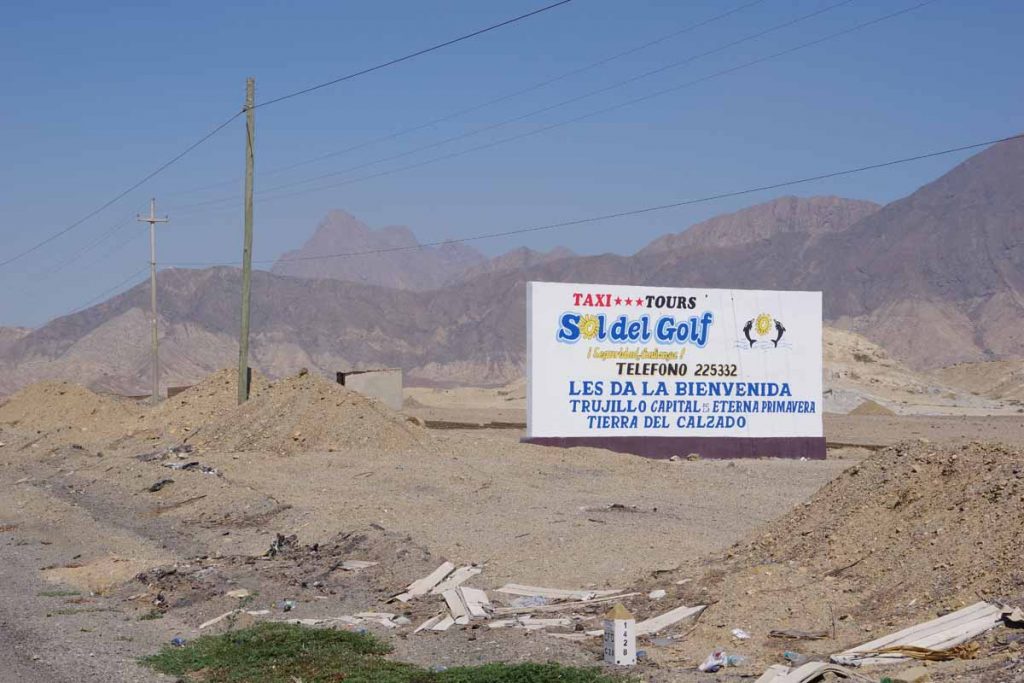 This sign told us that Trujillo was capital of the “Eternal Spring”. When I entered Guatemala, it claimed to be the land of eternal spring so does this make Trujillo the capital of Guatemala? 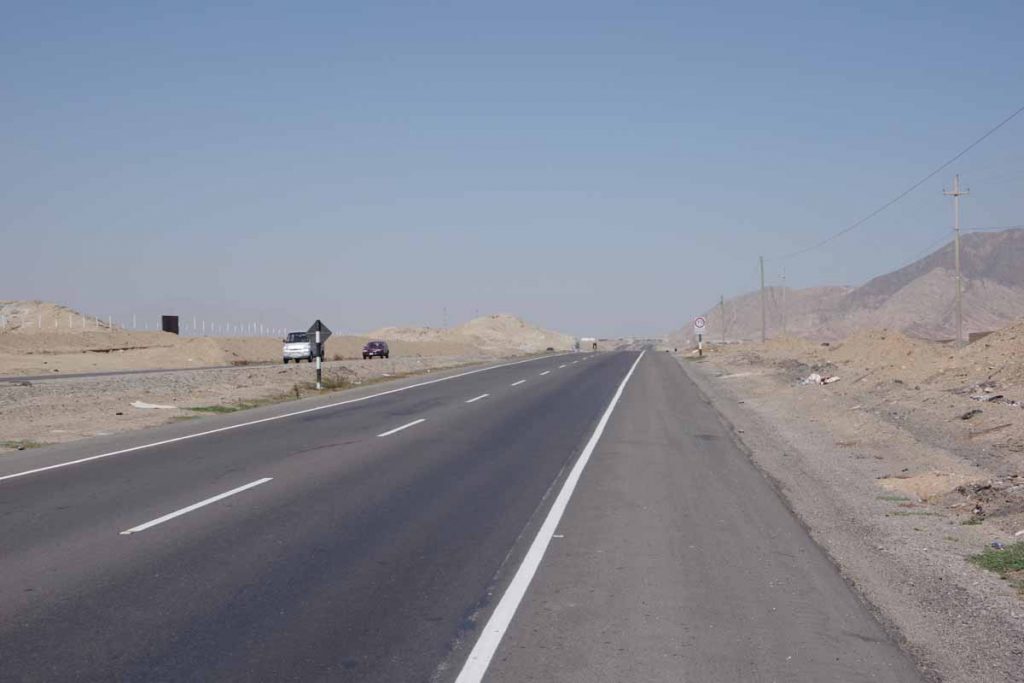 This next stretch of road was tougher, partially because it had a gentle climb but more significantly because the head wind had picked up. 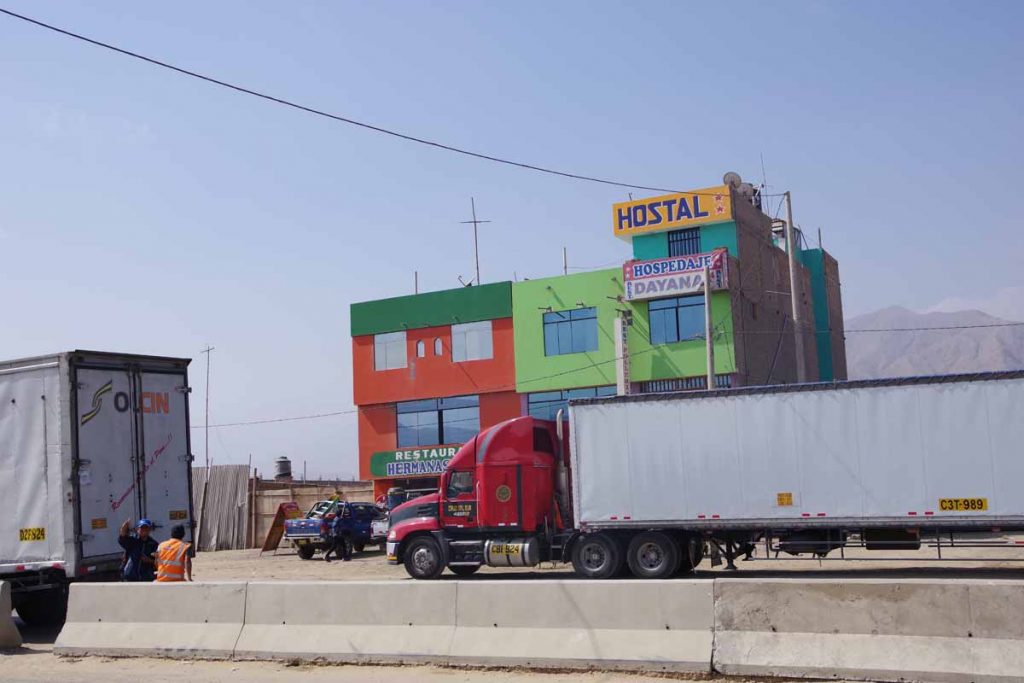 At 88 kilometers the road split into a bypass and one that led to the center. There was a small hotel here, though I figured I would ride into the center. 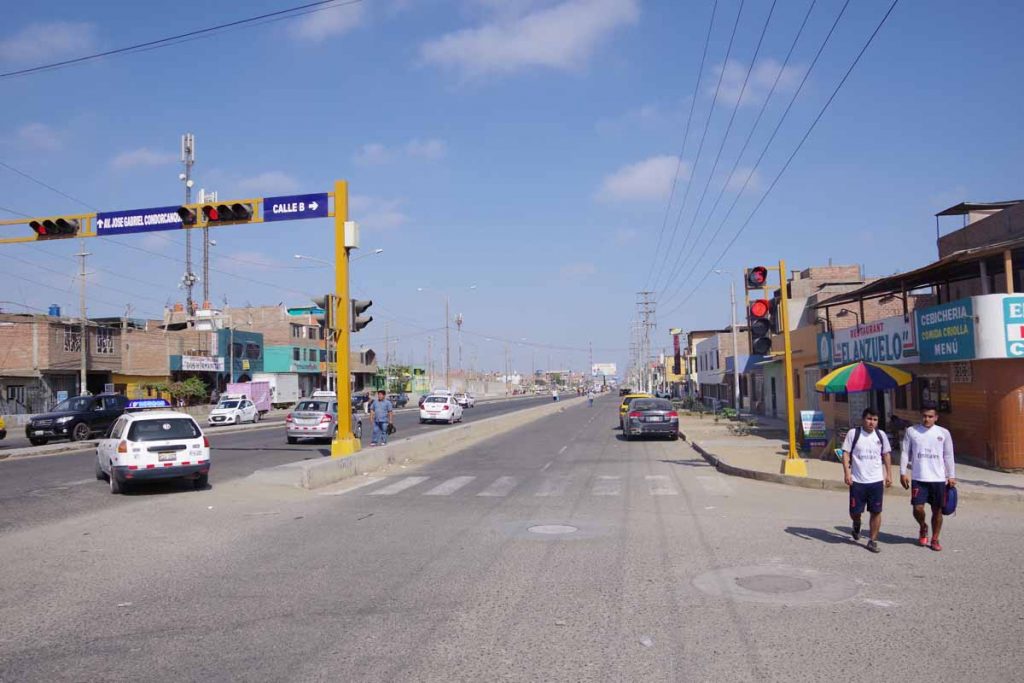 Coming closer, there was a nice frontage road that wasn’t being used much. I made great progress while a lot more of the traffic stayed in the center lanes. 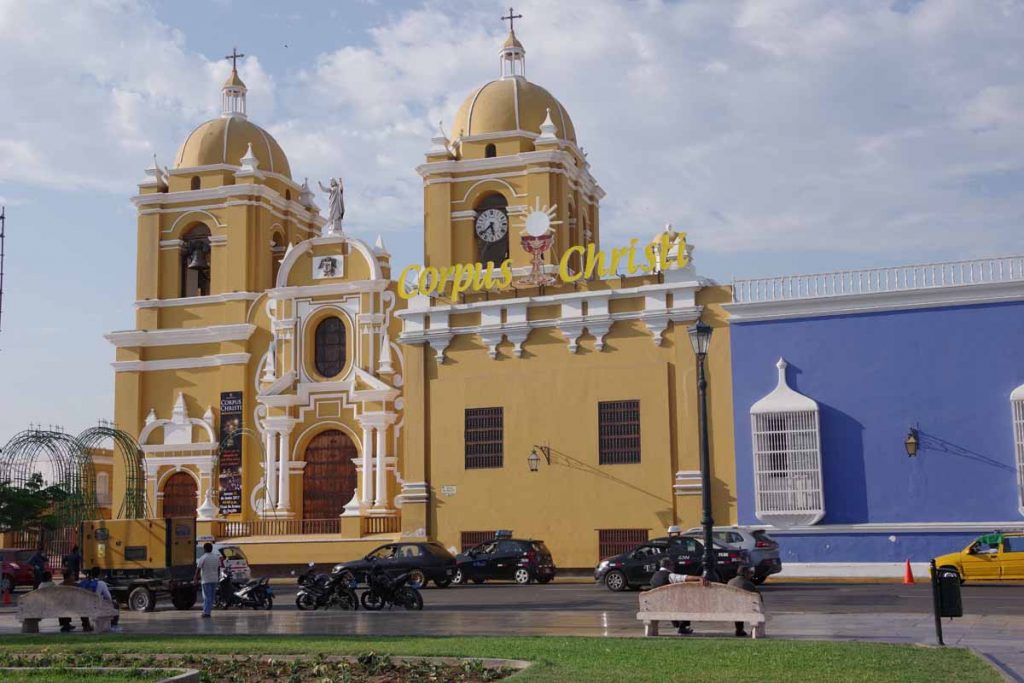 Without too much trouble, found myself into center of town and a reasonable hotel. I could tell right away that center had a lot more tourists. Heard English being spoken more and multiple establishments for tours. 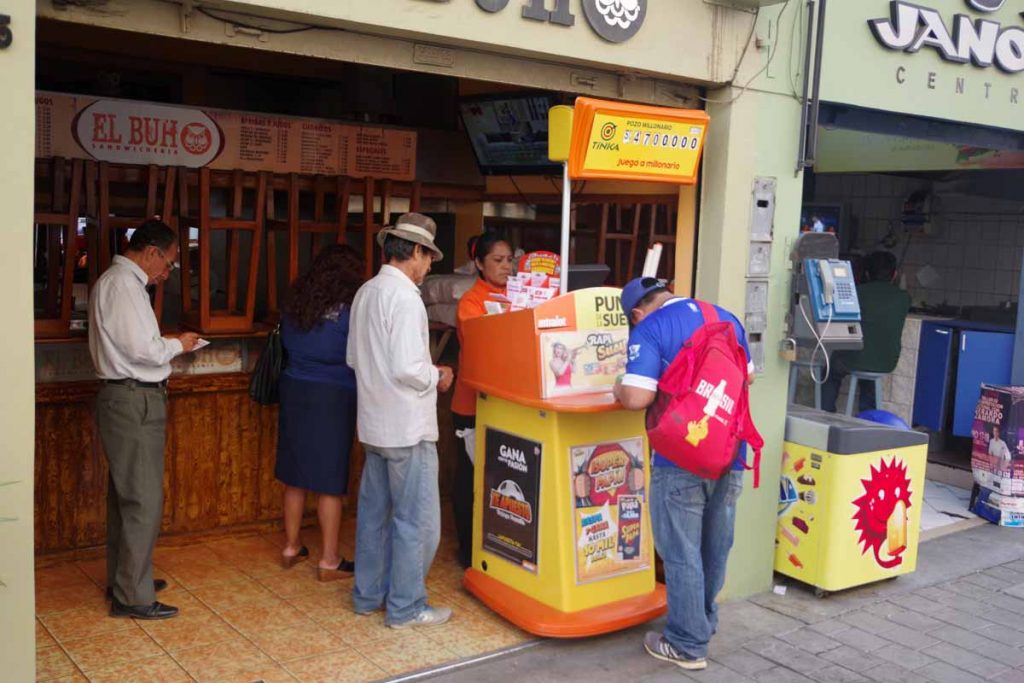 I do think these folks playing the lottery were locals. 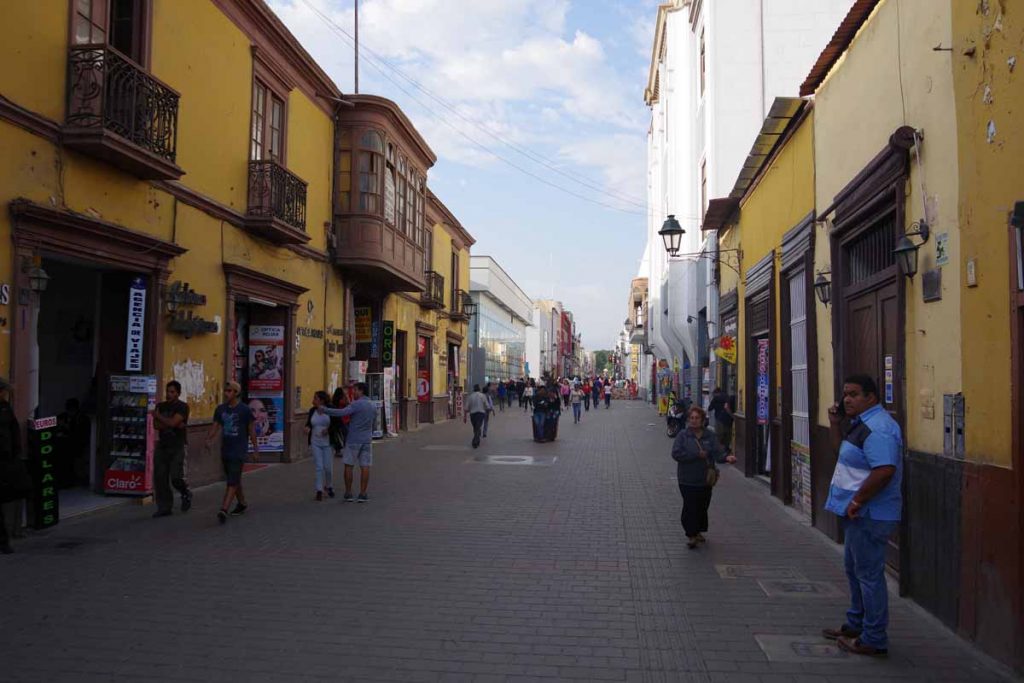 There was a nice little shopping street off this main square. 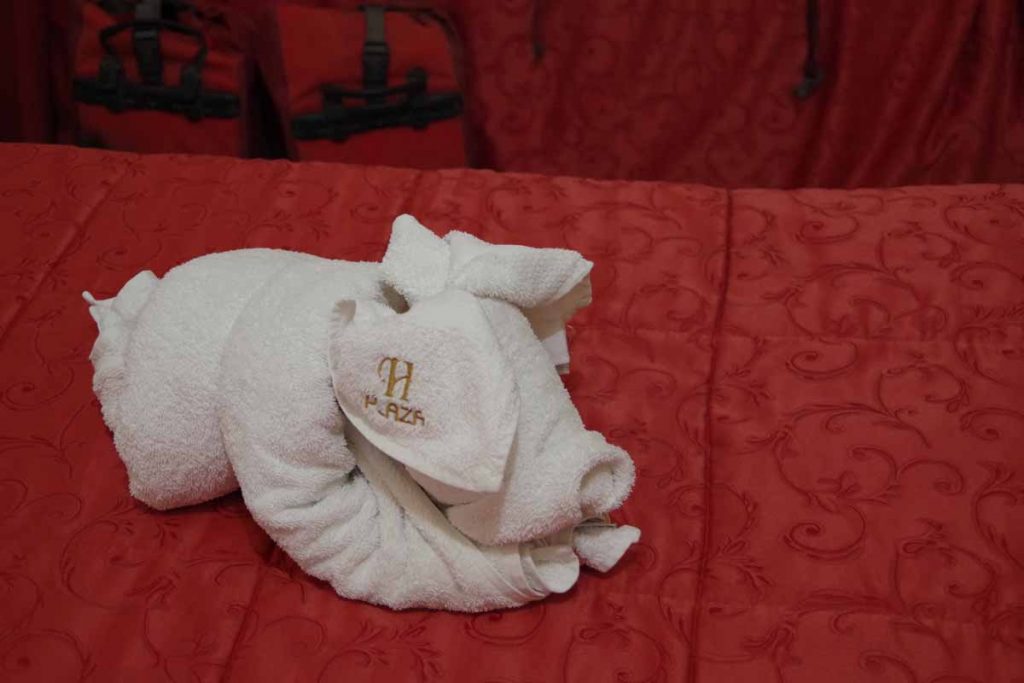 Hotel got fancy with folding the towels to create this little piglet.

Overall Trujillo has nearly a million people, but was surprisingly easy to ride in from the north. Nice to wander around the center and now pick the next sections headed towards Lima.