Two days cycling have brought us from the border to highlands of Guatemala. 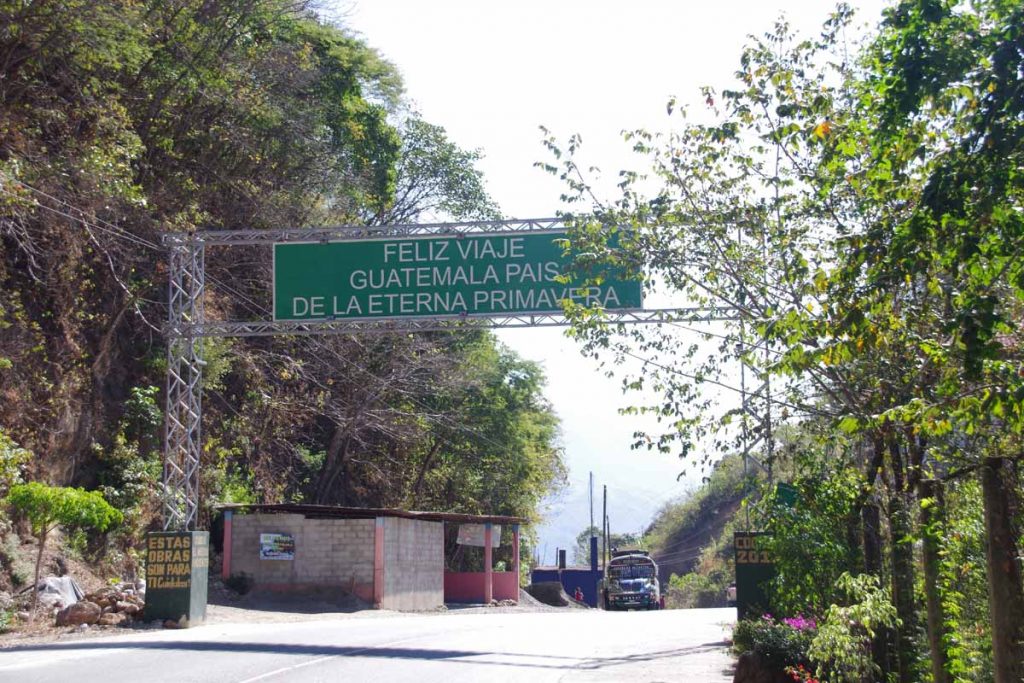 Sign above tell us Guatemala is the land of eternal spring.

In comparison to Mexico, Guatamala seems a bit more hectic including behavior of drivers on the road. Kids will sometimes yell “Gringo! Gringo!” as we pass. In Mexico, people were polite and friendly, but also wouldn’t call attention to us – or seem overly interested. In Guatemala, people are also friendly, but seems like we’re calling a bit more attention to ourselves. Otherwise, so far cycling seems similar. 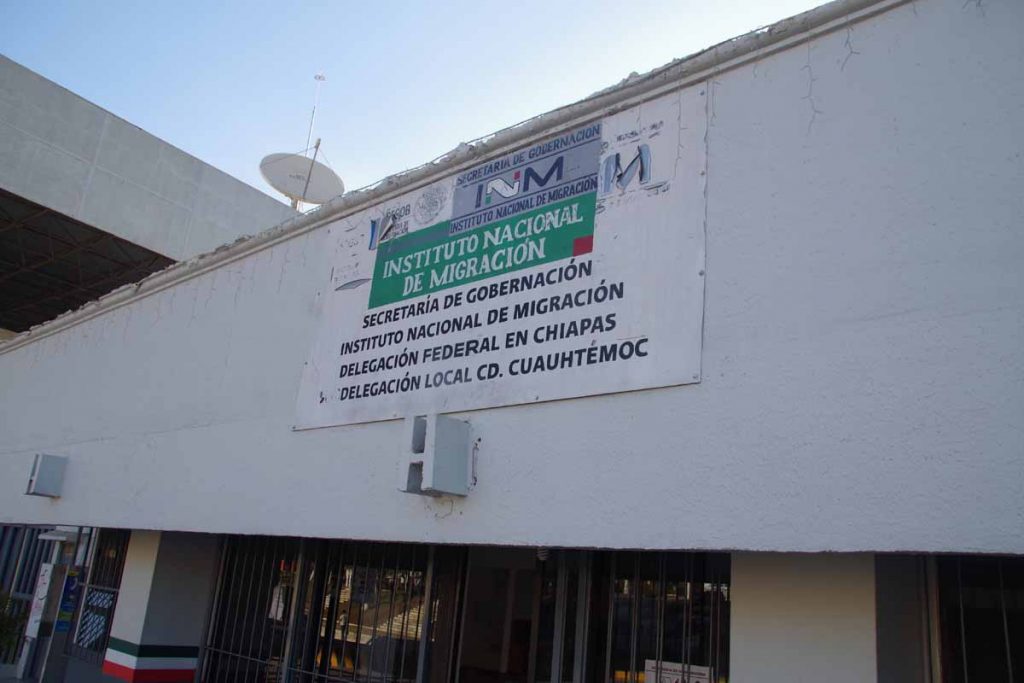 Started out our day going to the immigration office. The officer there wouldn’t place an exit stamp in the passport – unless we either had a receipt for our FMM or paid an extra $500 pesos. Seems like a bit of a scam to me – since I already paid $380 pesos for the FMM back in Tecate – but no longer had the receipt (don’t remember if they took it when they stamped the FMM or I threw it away).

Better safe than sorry, ended up paying to leave Mexico but with a bit of a sour taste that didn’t feel right. The other curiosity I noticed is that I could have entered and left Mexico without ever getting a passport stamp for either entry or exit. In Tecate, they would have let me cross the border without checking (assuming I was a day tripper?) and leaving Mexico – nobody checked either and I could have left without a stamp. 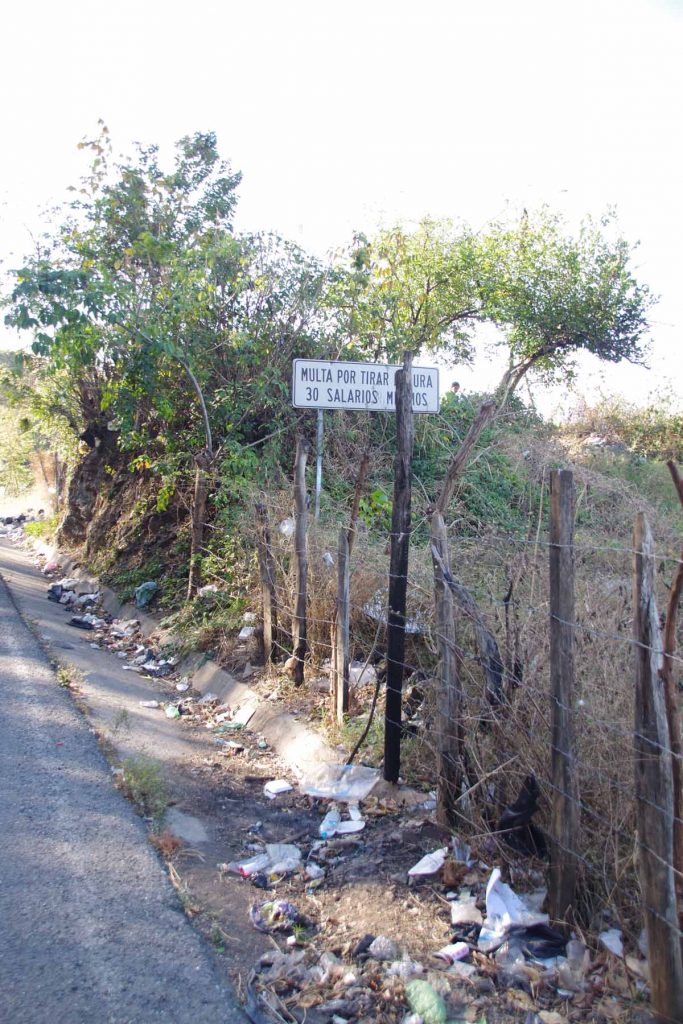 After getting the stamp, we had a four kilometer climb through no mans land. Here was another sign indicating 30x daily salary for littering. 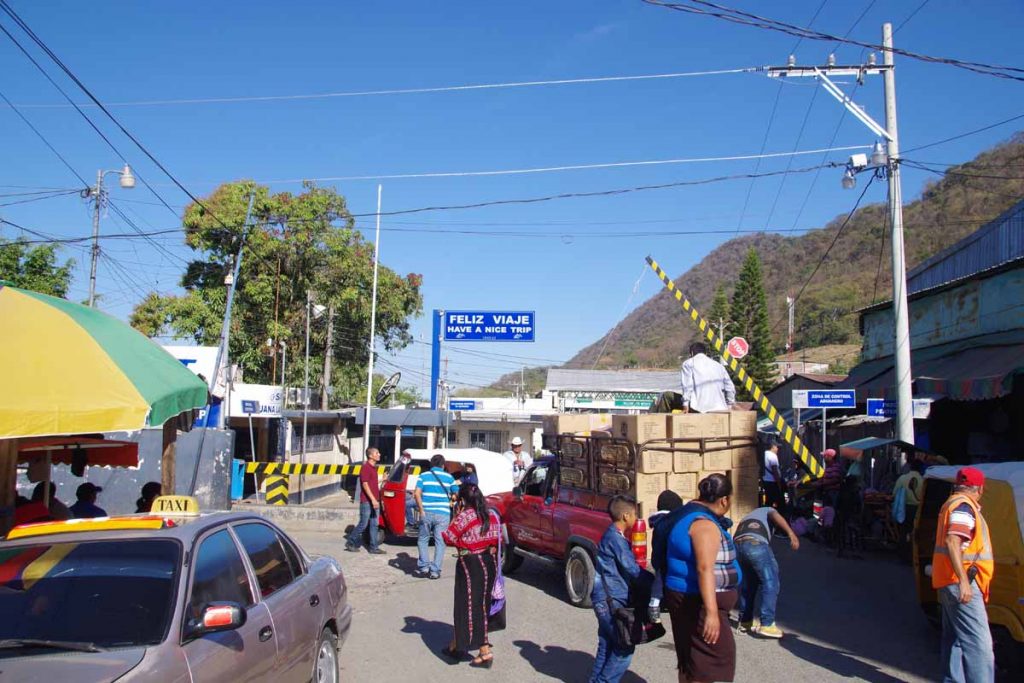 The last kilometer before the border were a bunch of small shops. After that the intermediate border zone. A money changer approached me. I understand banks in Guatemala will exchange US $ but not always Mexican pesos – so did this at the border. The official exchange rate is ~0.35 Quetzal per Peso. The money changer offered 0.30 and I negotiated back to 0.32. Still not great, but I didn’t have too many Pesos to get rid of.

After that, got my Guatemala entry stamp (25 Quetzal), left the border zone and we were in Guatamala! 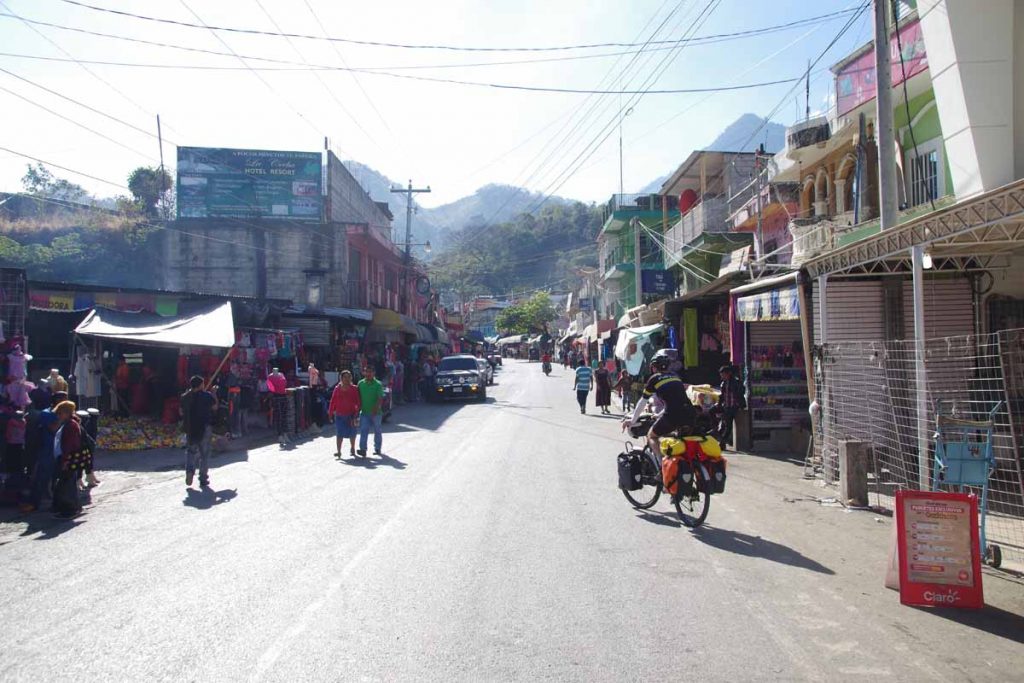 Little town on the Guatemala side was at least as chaotic as the Mexican side. We mostly cycled straight through and out of town a few kilometers later. 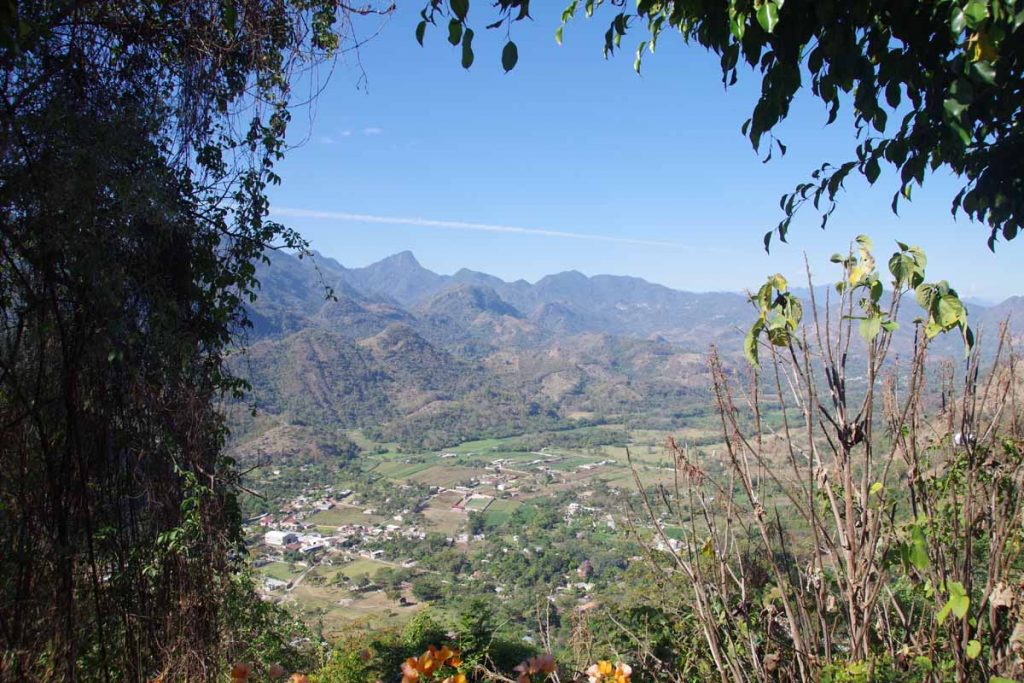 Looking down on a village in Guatemala.

After climbing the first hill, it leveled off for a bit and we came through a second village. This one with several hotels and also some ATMs to get some Quetzal. 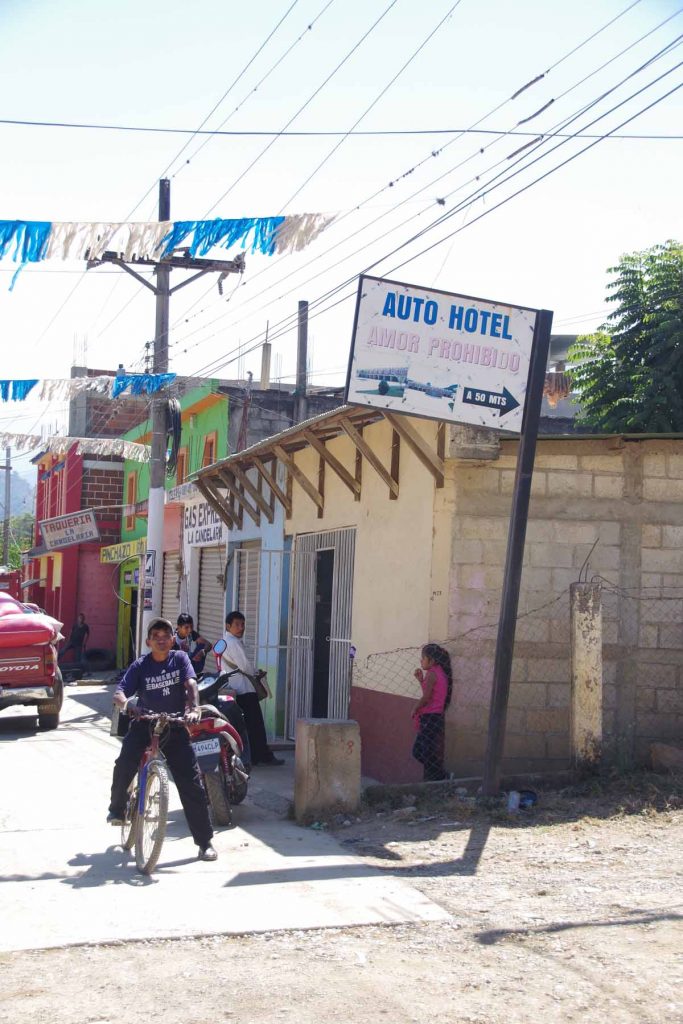 Was amused to see the sign for the auto hotel indicating “love prohibited”. 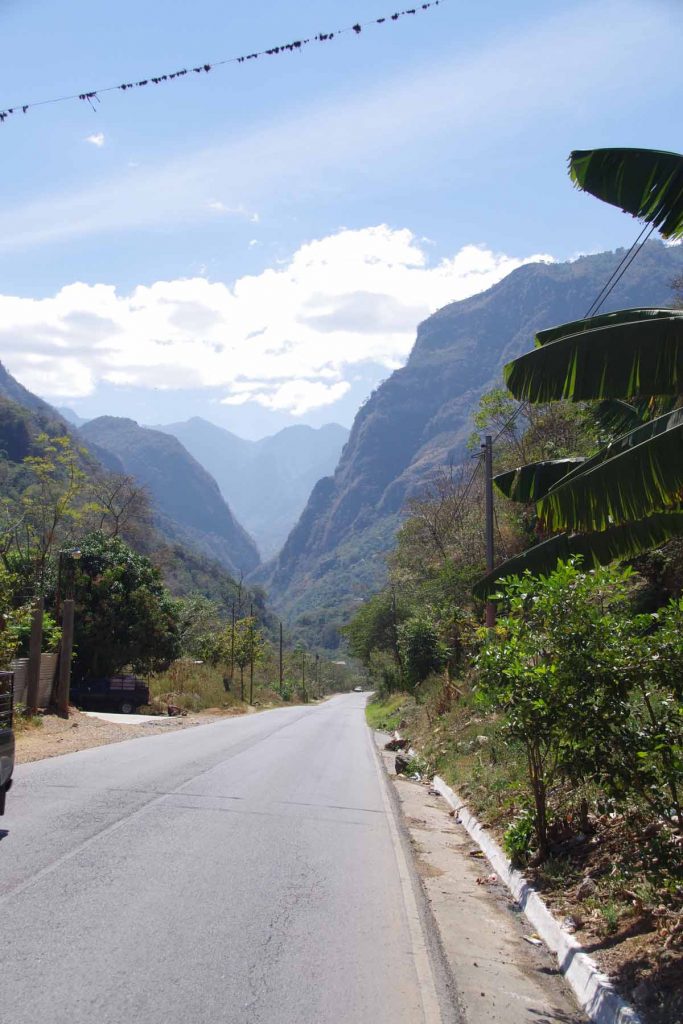 The road was busy and somewhat hilly as we went through several villages. A little past 20km, descended to a river and then entered a steep valley. For the rest of the day, we would follow the river in this valley upwards, climbing from ~900m to ~1500m. There were a few 8-9% grades but mostly reasonable grades. The road was narrow with multiple curves. 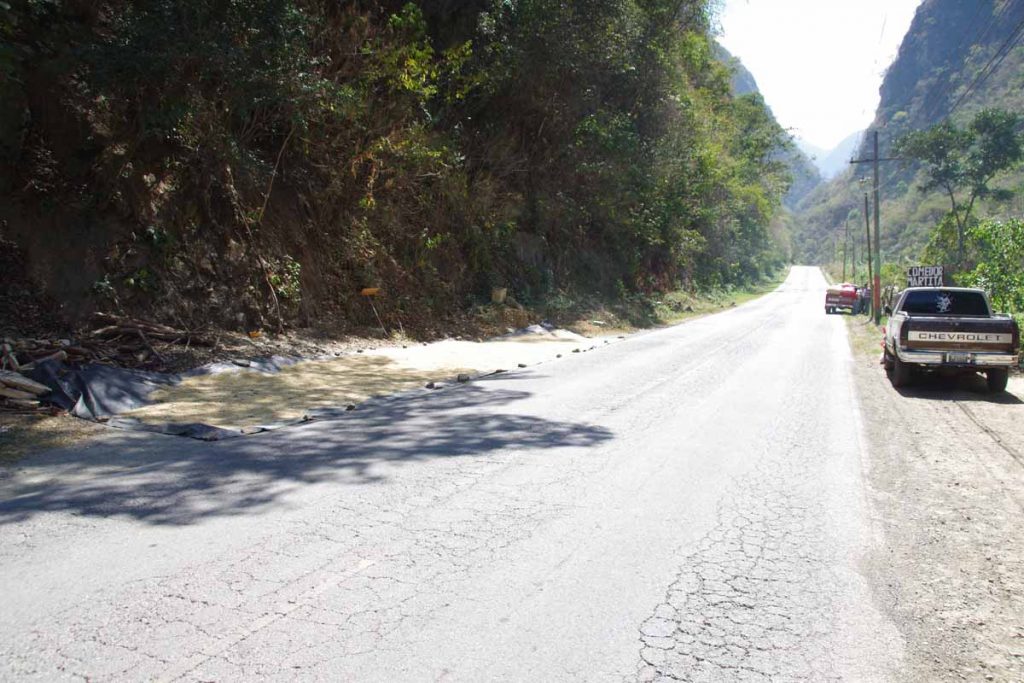 Along the way we saw several instances where coffee was set out to dry. 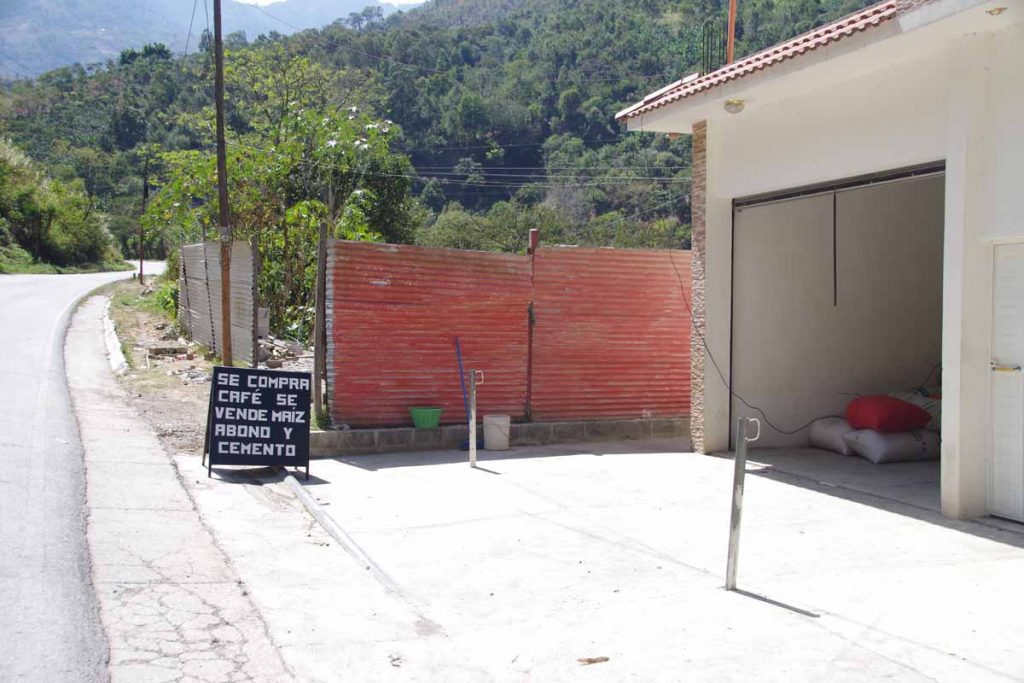 This establishment bought coffee and sold corn, fertilizer and cement. 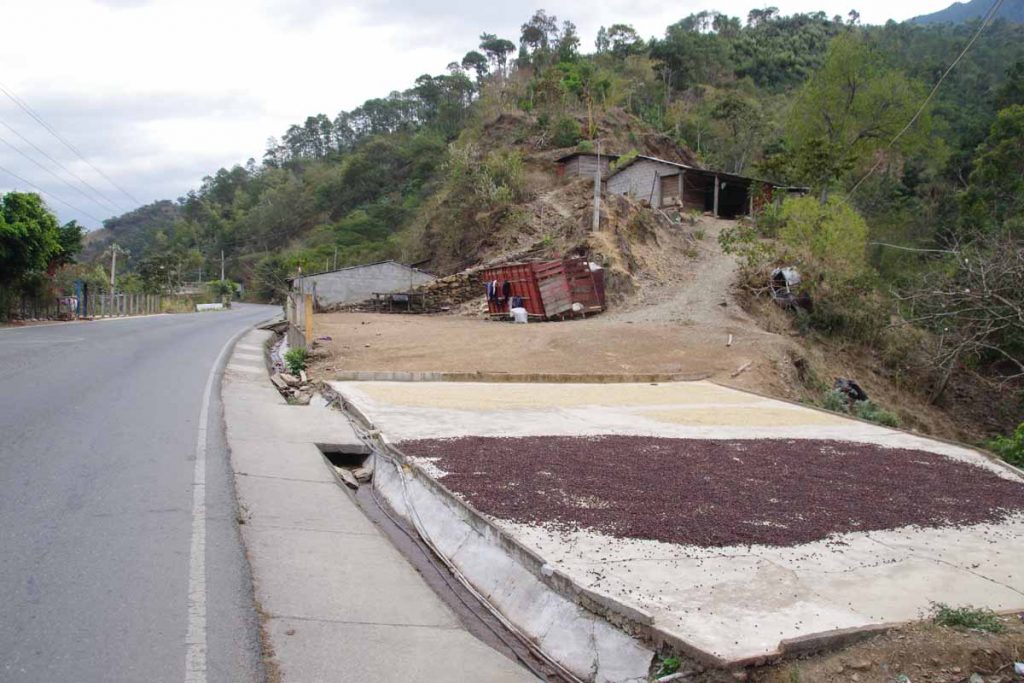 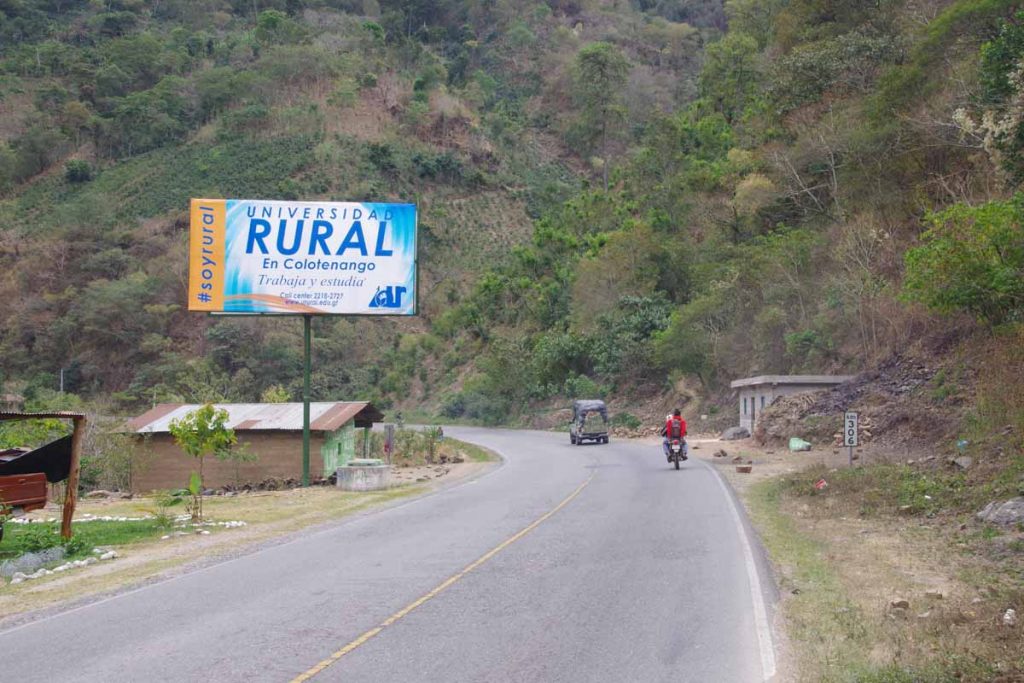 Our end destination was a college town. 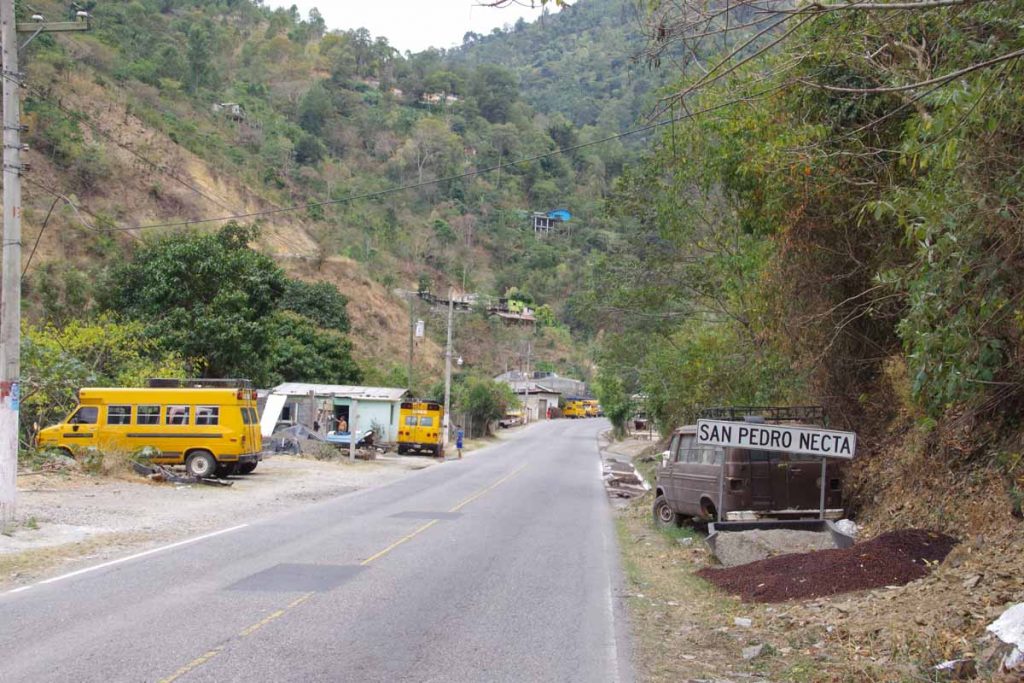 San Pedro Necta was a village we passed through. Also interesting to see where old school buses ended up. We also saw a number of the full-sized old school buses, often decorated and with a roof-top rack. 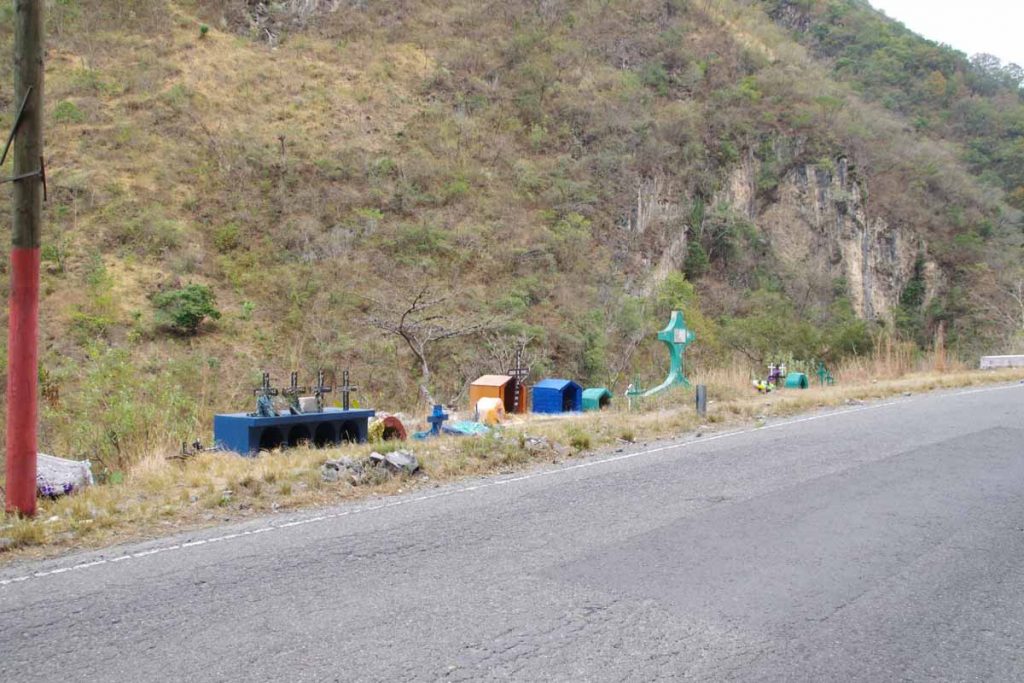 Roadside memorials. Unfortunately, quite a few near this corner. 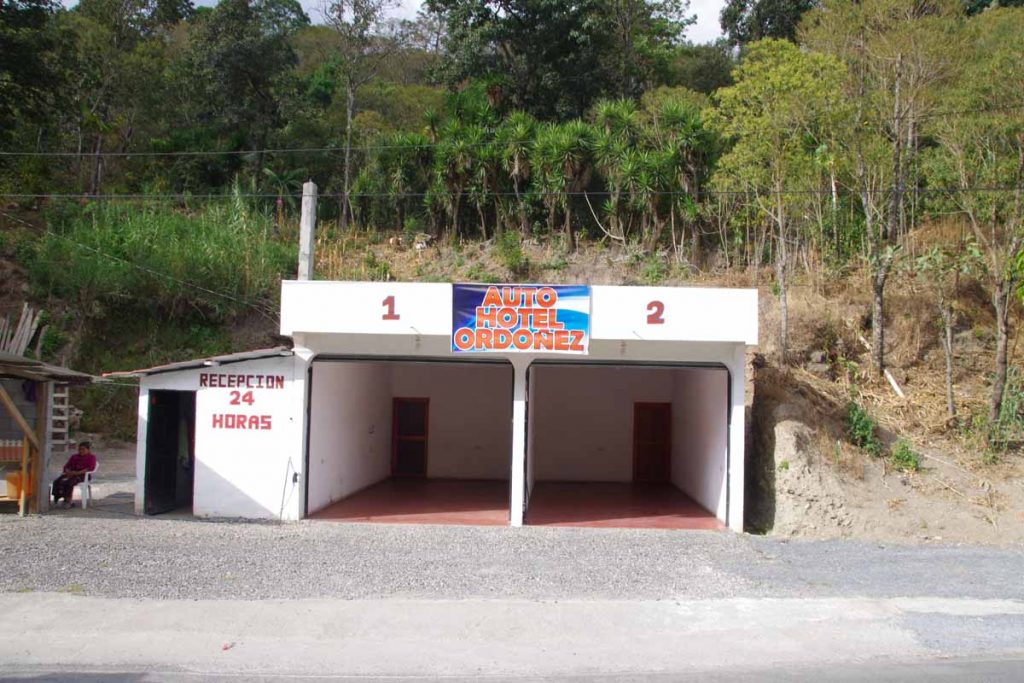 Another example of an auto hotel. Open 24 hours. Once you drive in, the door gets closed hiding your vehicle.

At 54km we came to Colotenango. The main town is 1.5km further east and up a hill. However, we were able to find a pesado (guest house) at the turnoff to the town. Nice ride with some good climbing but overall a pretty straightforward entry into Guatemala. 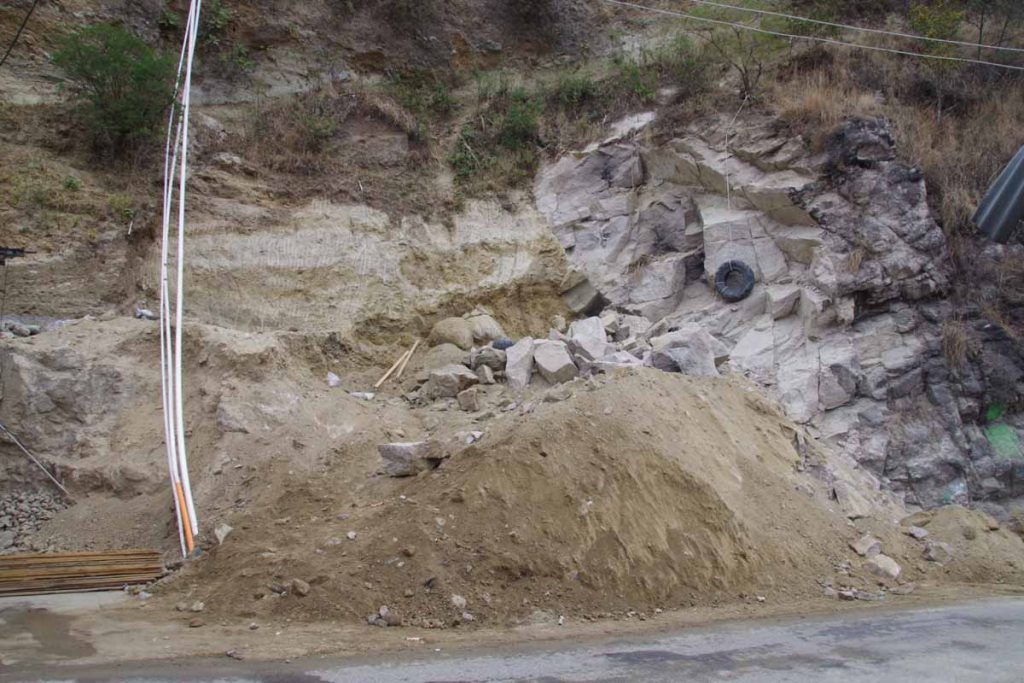 Overnight at 3:30am there was a large explosion. However, we had been warned as they were working to excavate the site across the road. They worked through the night and then set off dynamite in wee hours of the morning. Rather than traditional hotel, we were in a “posada” with shared bathroom. Otherwise comfortable and clean. We had planned a shorter ride today to get into larger city, get some washing done, get a SIM card, etc. 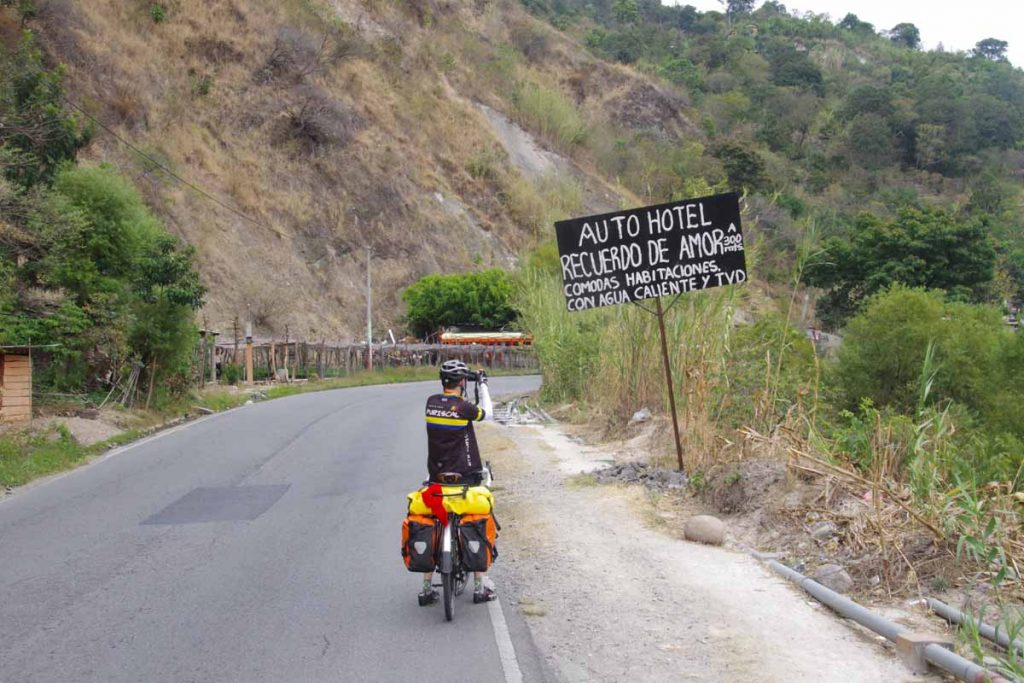 The road continued slowly up the hill as we stopped every so often to take tourist photos. 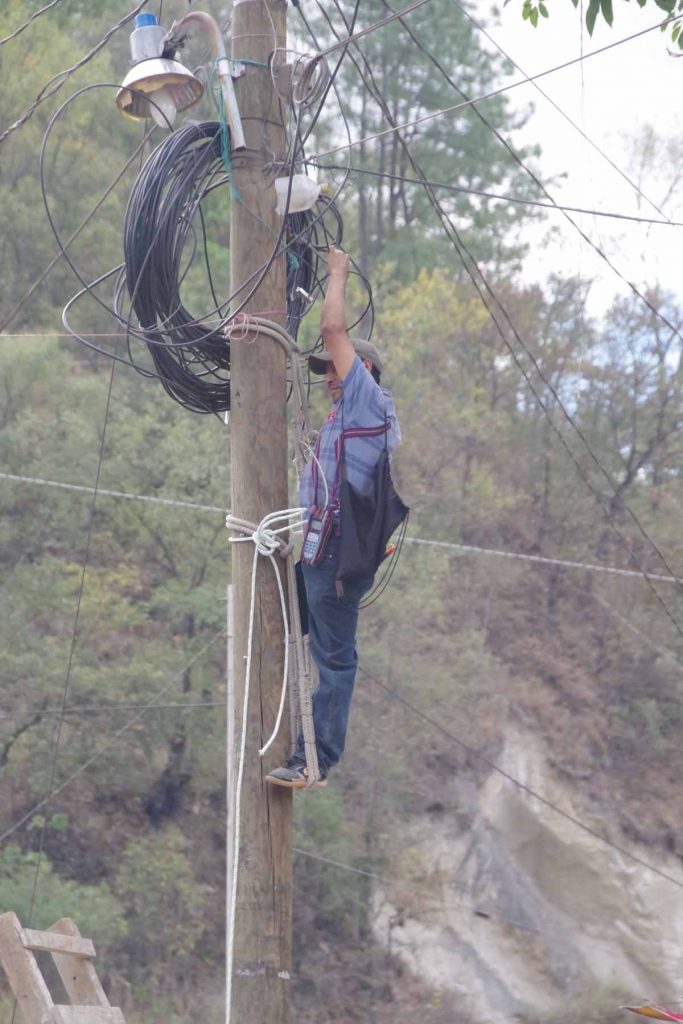 The repairman fixing the wires. 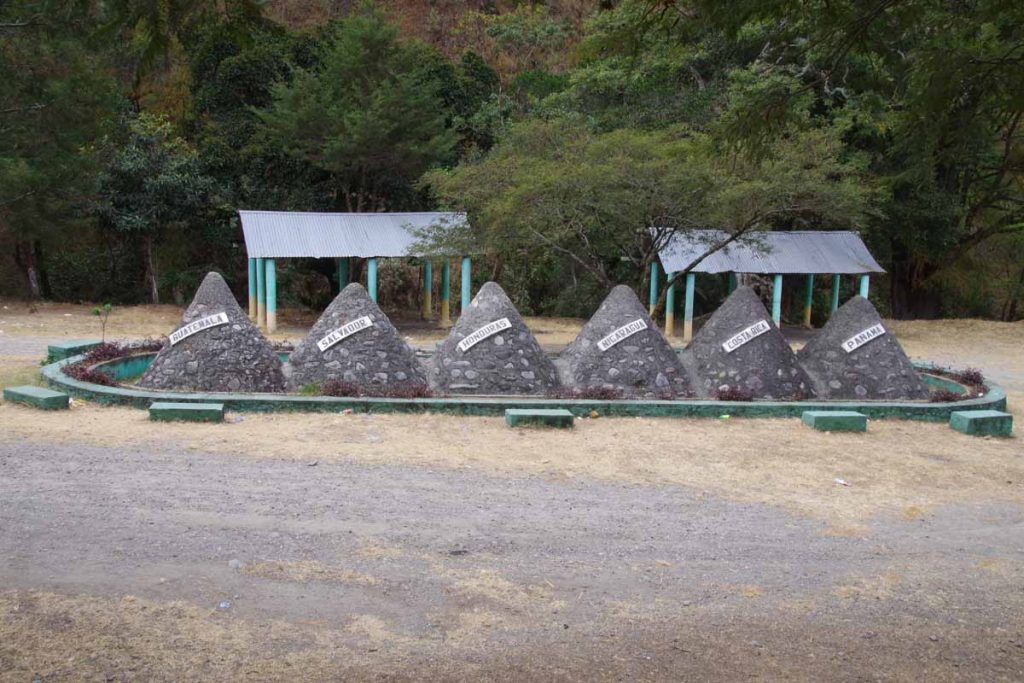 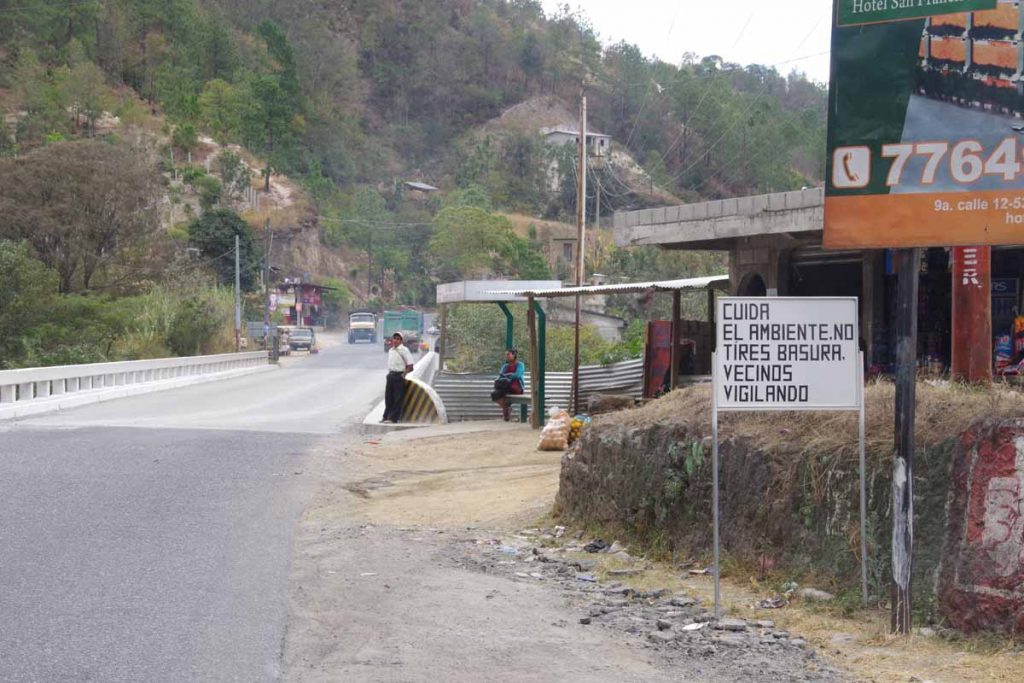 A sign admonishing you to take care of the environment and don’t throw trash because your neighbors are watching. Unfortunately, still see some litter around in Guatemala as well and a bit more broken glass on the road as compared to Mexico. 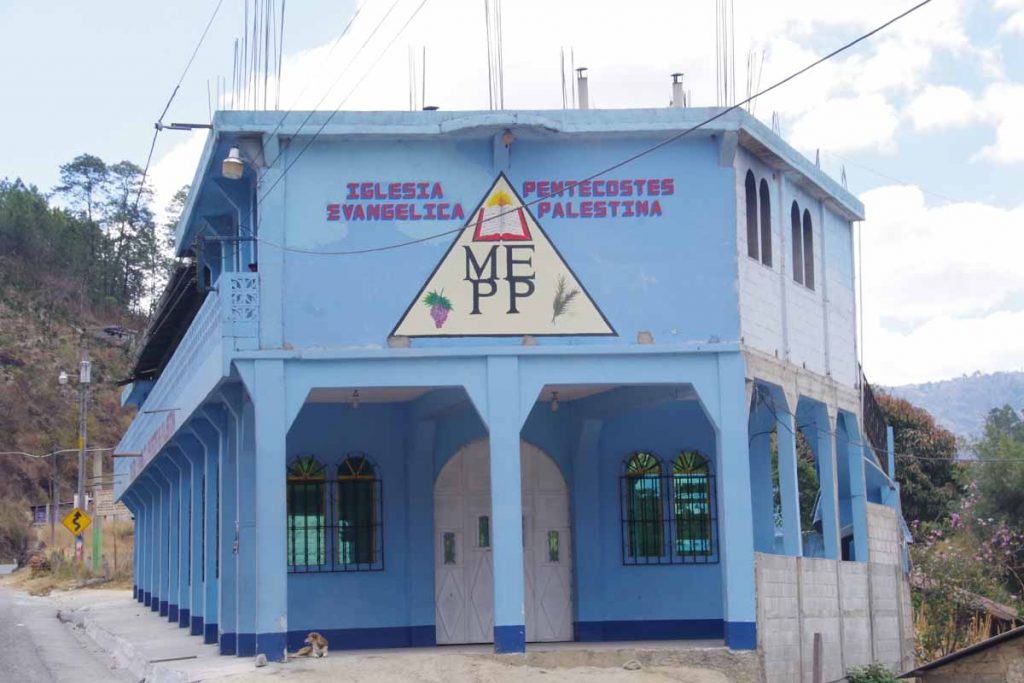 A church we passed. 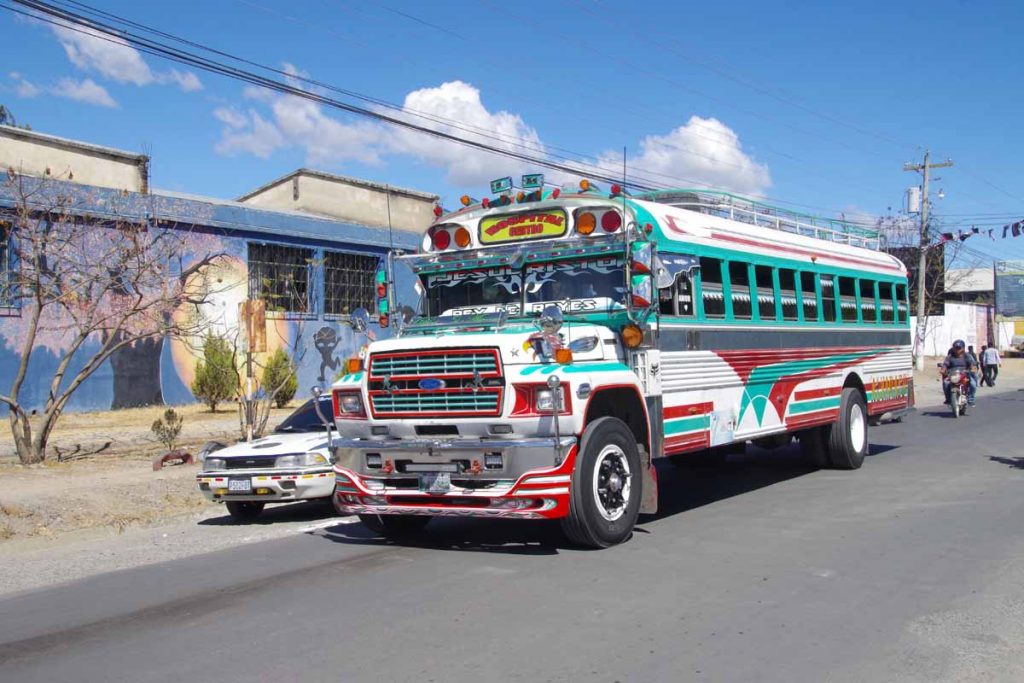 These “chicken buses” come past, often at high speed and making lots of noise.

At 26km, we turned off onto smaller roads leading into Huehuetenango. It became steadily busier as we neared center of the city. Without too much difficulty we found a reasonable hotel and made it a shorter day. 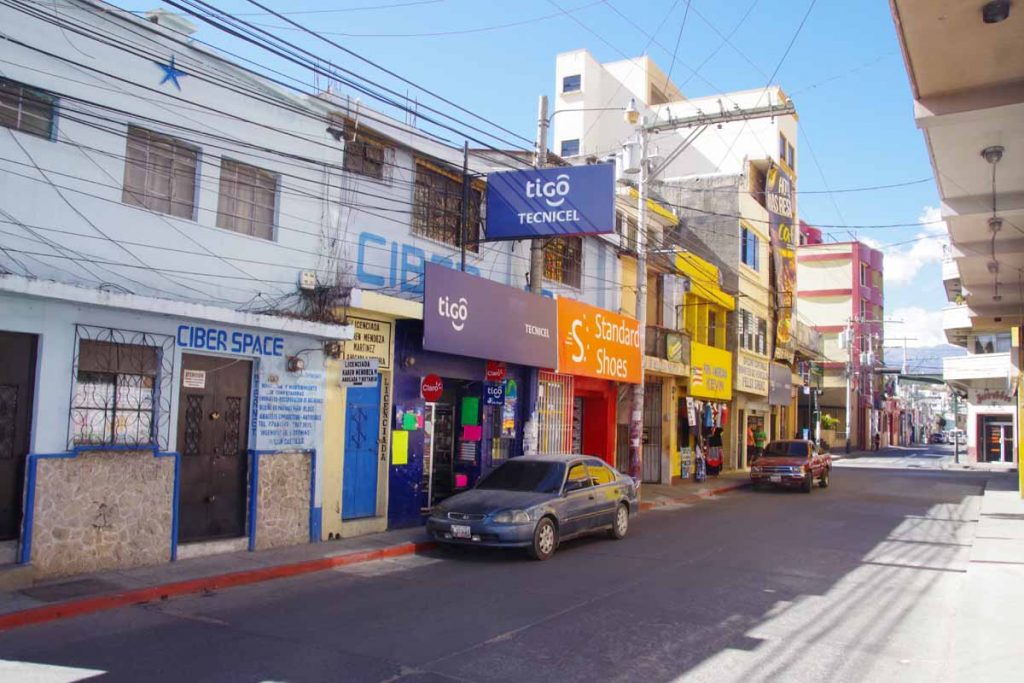 I found a cell phone store and was able to buy a SIM card for Guatemala. Particularly useful as we near outskirts of a larger place and try to look things up on Google Maps. 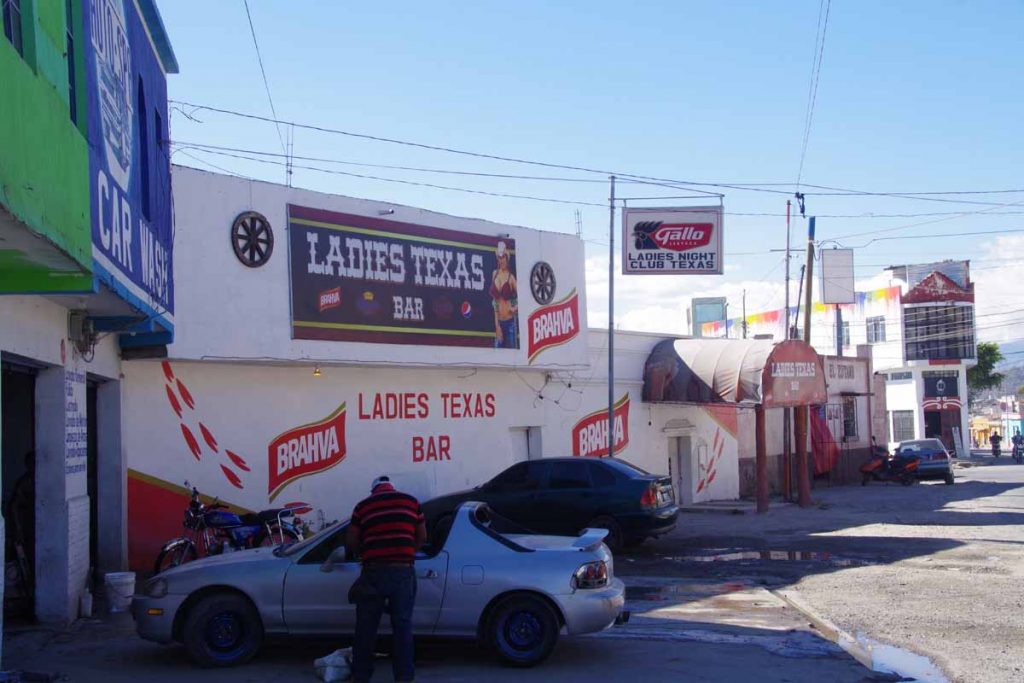 There is a ladies Texas bar in our neighborhood.

Otherwise nice to have ridden across Mexico and now feel like I’ve seen a small slice of that country in the 2.5 months spent cycling. Figuring out Guatemala but so far interesting to ride through. We’re in the highlands area so need to plot our elevation gains as well as horizontal distances. Unfortunately, Google Maps no longer gives bicycle instructions (which also have elevation) but we can also figure things out from other trip journals.