One last night in Mexico. David gets the mechanics award today for helping fix my brakes. 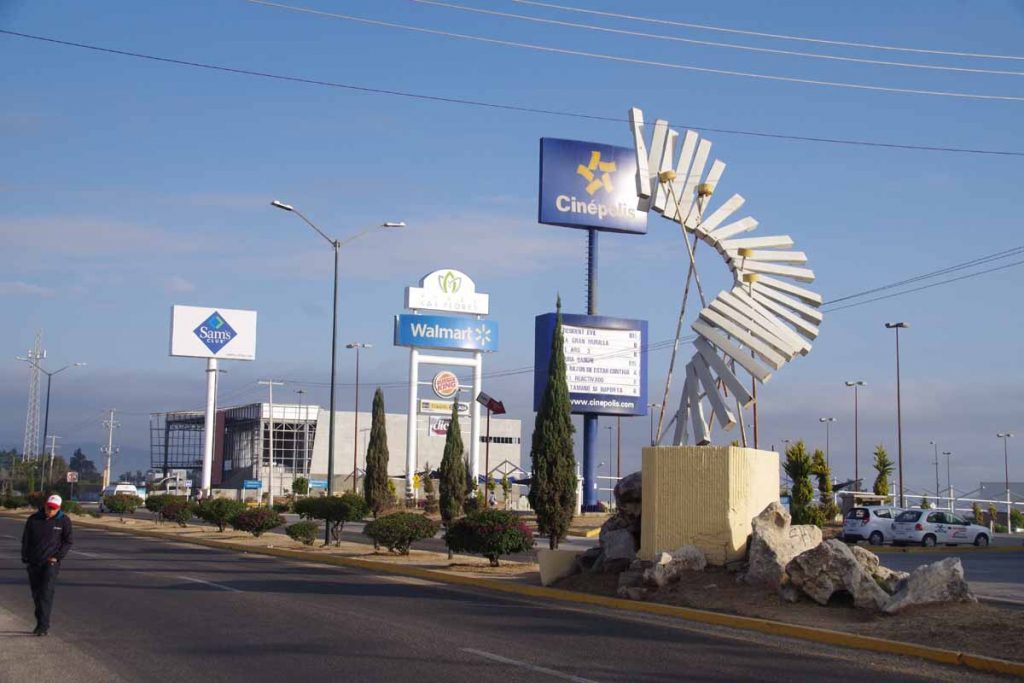 Nice in cool in Comitan as we left. Skies were overcast and the road out of town was four lanes with reasonable shoulder. We stopped briefly at 6km at an OXXO across from the Walmart. One could also see the movies playing in town. 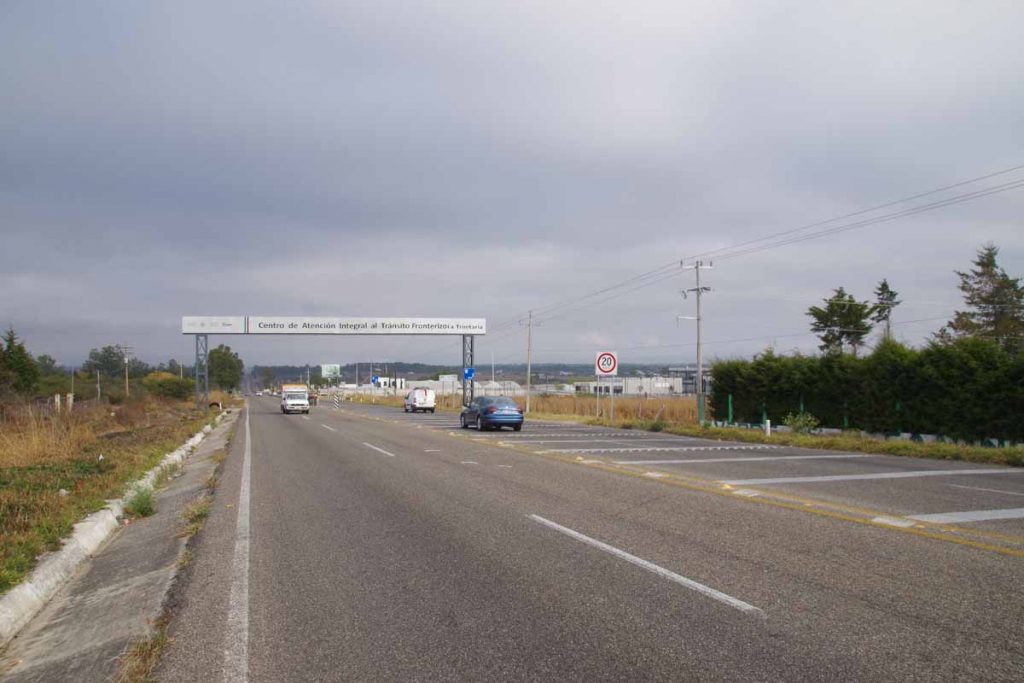 We eventually lost our shoulder but also had less traffic. We saw several instances of “frontier” checks including this one looking back that seemed to direct all traffic past a large justice center. 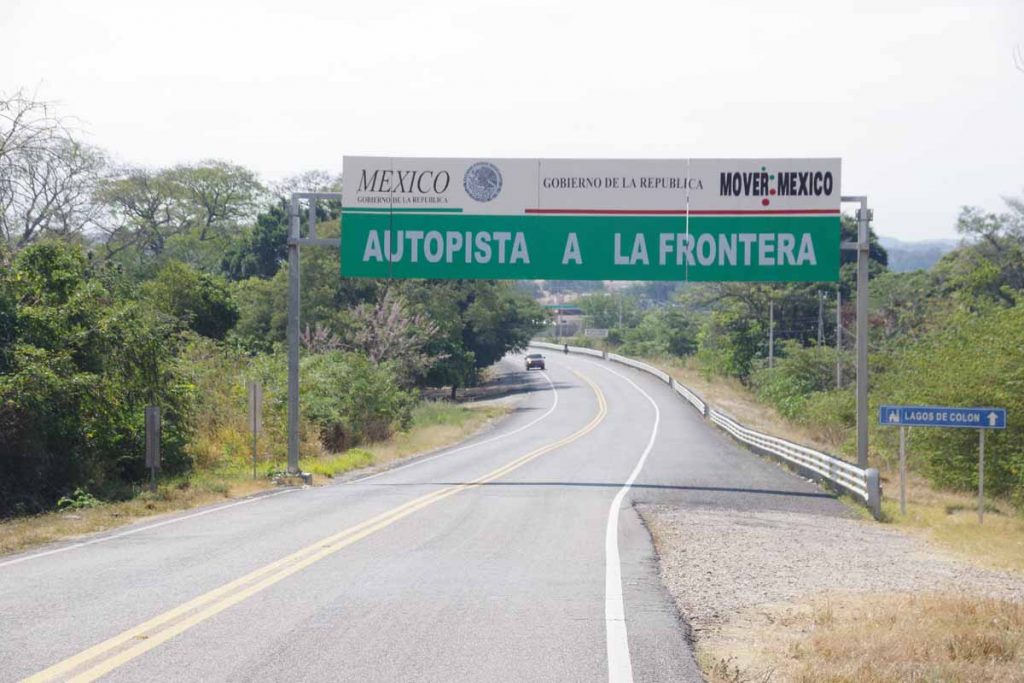 Near the bottom was a nice autopista highway for 8km. After that shoulders were more intermittent. After this level for a while and then a gentle downhill. 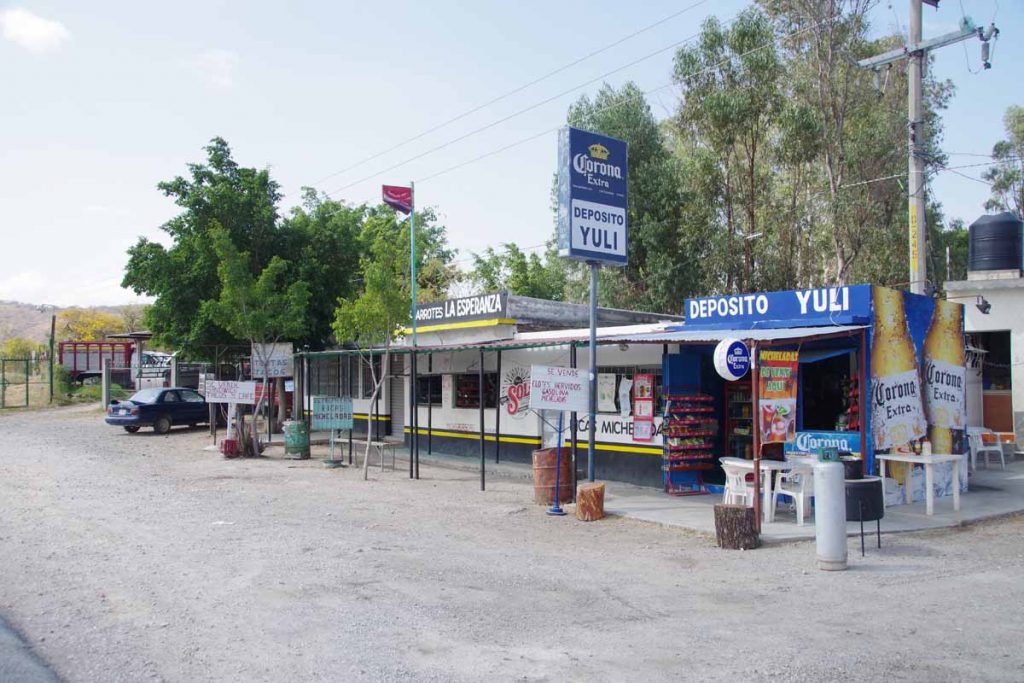 It was on this downhill near 55km when my rear brake rotor suddenly made a lot more noise. Not a brakes worn out, metal on metal squeal but instead more as if something was rubbing. I stopped and tried to see what was going on. Opening up the brakes a bit helped a little but there was definitely something not quite right. David was already ahead so I rode down to him. Not much further we stopped in a shady spot next to a restaurant.

We took the bags off, turned the bike upside down. Nothing immediately obvious, though we were able to reduce the symptoms considerably. Still seemed like the outside of the rotor was rubbing on something. I started thinking through different scenarios on how we might address this including potentially a bus to better place to analyze things.

We asked at nearby motorcycle sales shop and people there suggested a motorcycle repair just a few km down the road. We got there and again turned the bike upside down with all bags off. The repair people definitely seemed amused at prospect of a “motorless” vehicle to examine and were even eager to start taking everything apart. David cautioned them to instead lets take off the brake pads and start with that.

Once the pads were out, the cause quickly became apparent. The pads were well worn (only recently installed in Oaxaca) and more importantly, the small clip that held them in place had broken on one side. That likely accounted for sudden noise as well as additional off-center wear. I still had the pads that had come off the bike in Guadalajara and they had less wear (perhaps higher quality than what was installed in Oaxaca), though we’ve also had some downhills and I’ve definitely used the brakes since then a fair amount.

After this fix, a lot better (thanks David and motorcycle repair team). Also reassuring to have this working again. 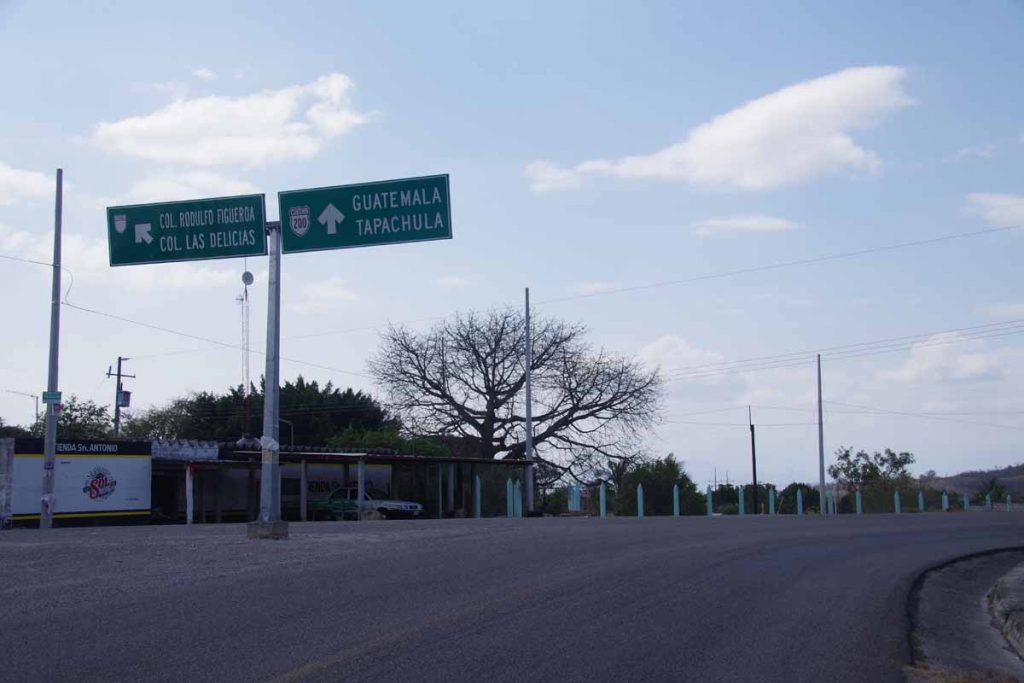 With lunch and extra repair stop, it was now past 2pm and my bike odometer read 33C (91F) and felt at least a hot. It was fairly flat and we had a reasonable pace. 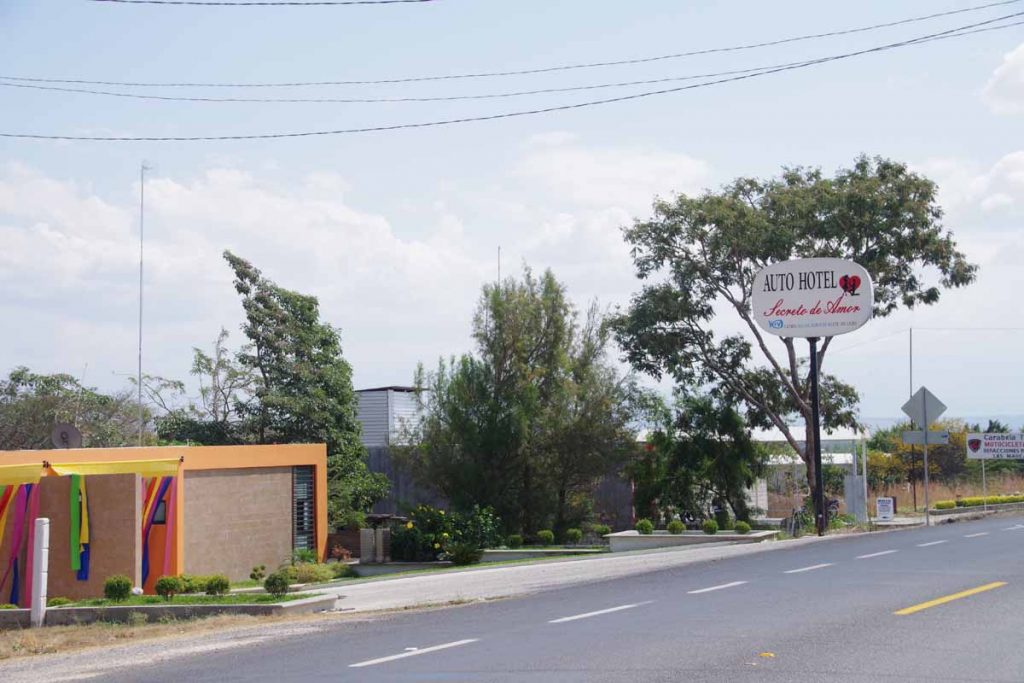 We passed some hotels including this “love hotel”. 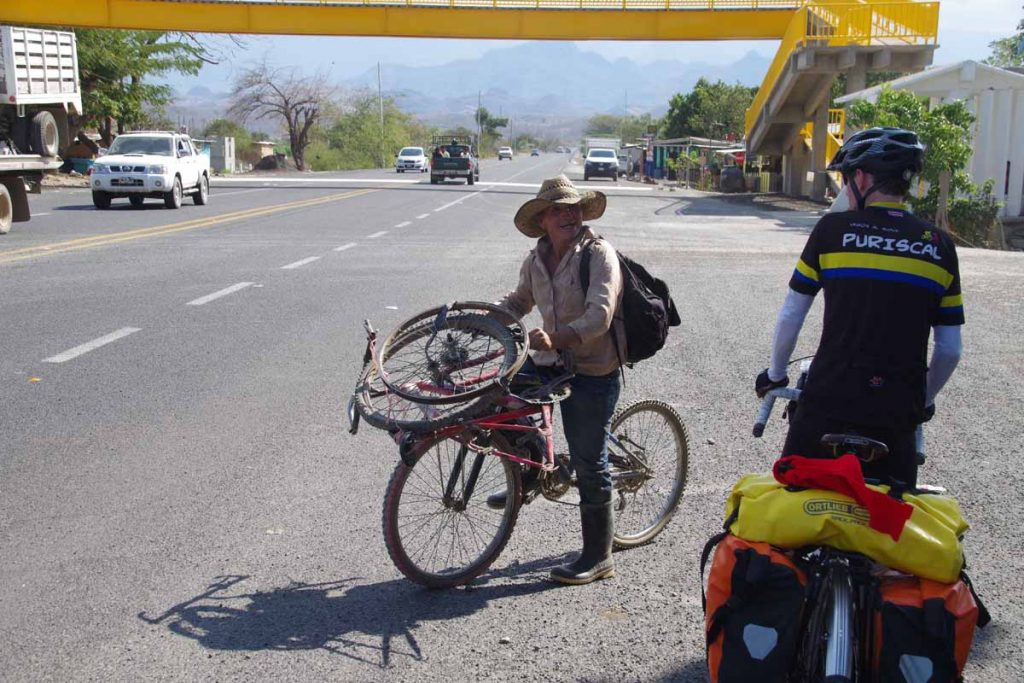 This guy was carrying all the parts for a bike on his bicycle.

In afternoon heat, we were a bit slower, particularly going over a few gentle hills. We had a nice stop at comedor with locals. They saw my grey beard and thought initially I might be David’s “papa” which was a bit amusing. 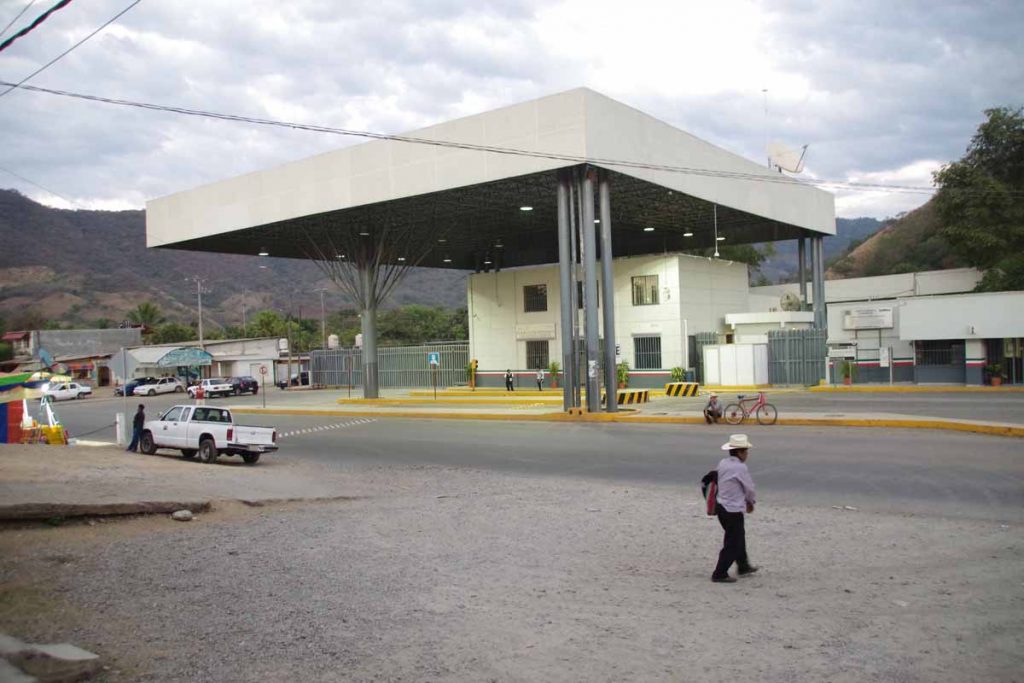 It was already later in afternoon by time we came to Ciudad Cuauhtemoc. We expected a bit of time going through customs as well as exchanging money. In addition the road starts climbing almost immediately after the town. Hence we decided to stay in Mexico one last night and start fresh in morning with entry to Guatemala. 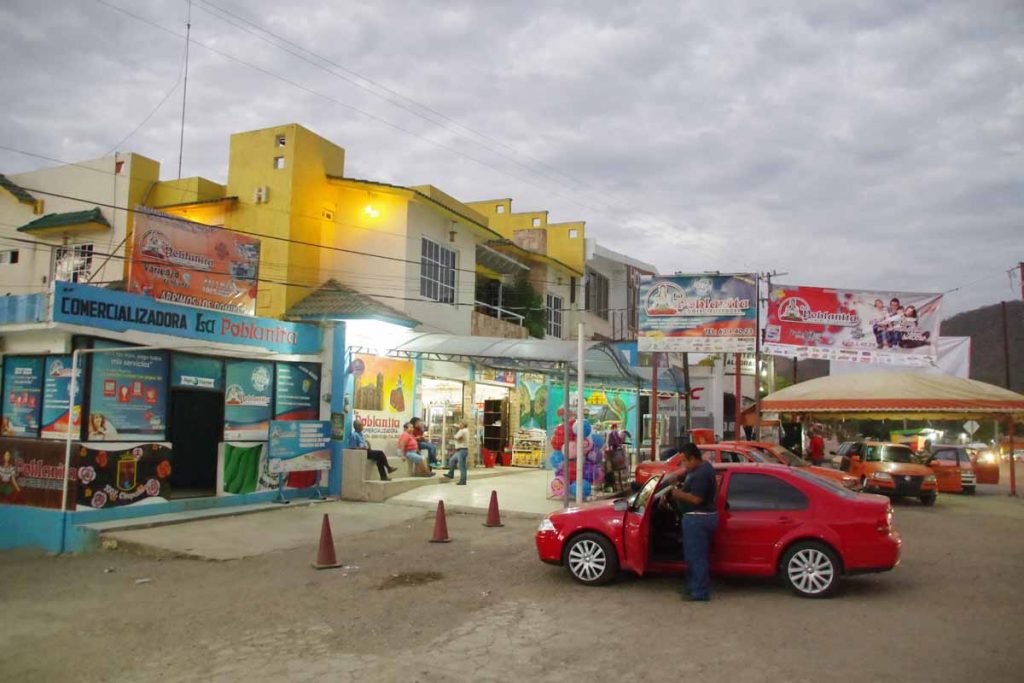