Day One
Wow! Really liked the scenery today as the road went along the rocky shore with waves crashing and creating white foam. There was a fair amount of climbing, though less wind. 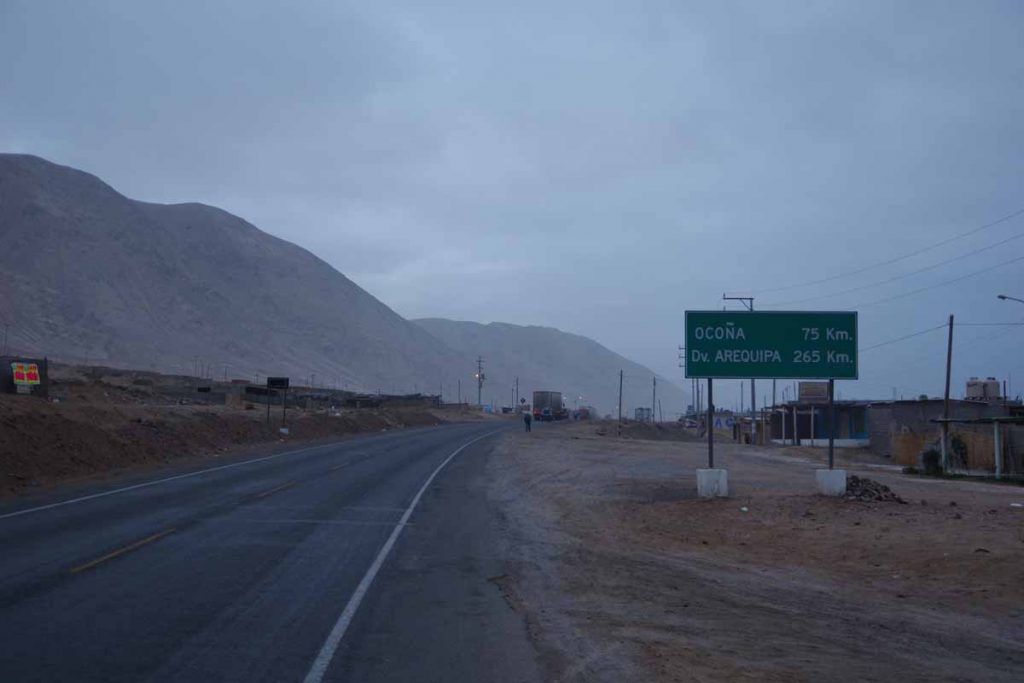 Nice rest day in Atico. I expected today to be tough with a lot of climbing, though it ended up being easier than anticipated and with less wind. 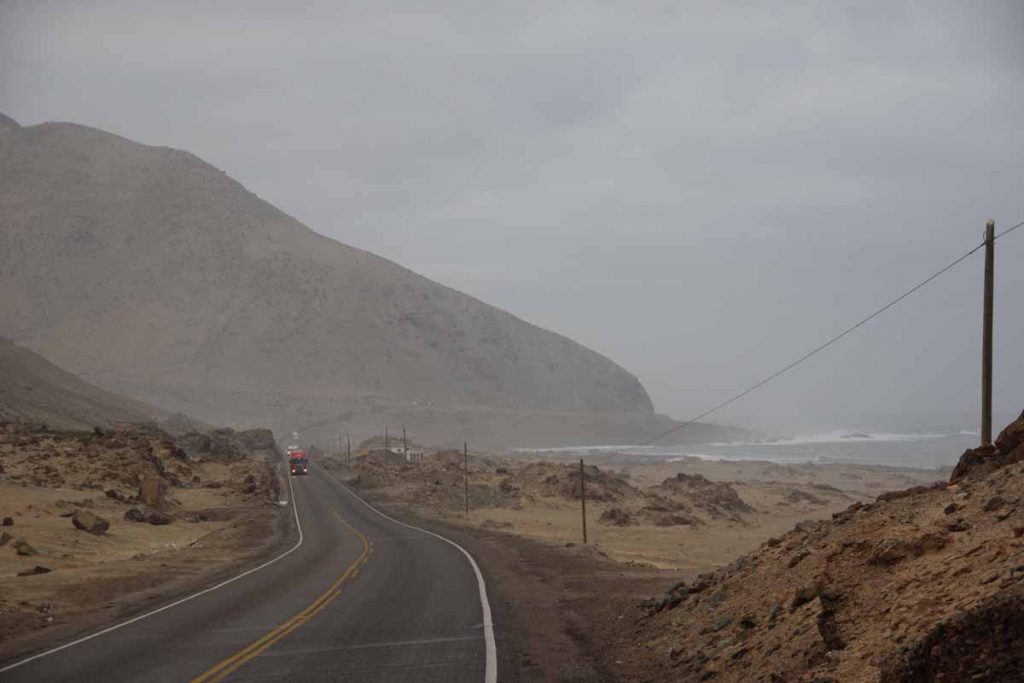 This part of the coast had steeper cliffs with the road cut right in. Imagine the Big Sur coast in California in a desert without trees and with 18-wheelers on the road. 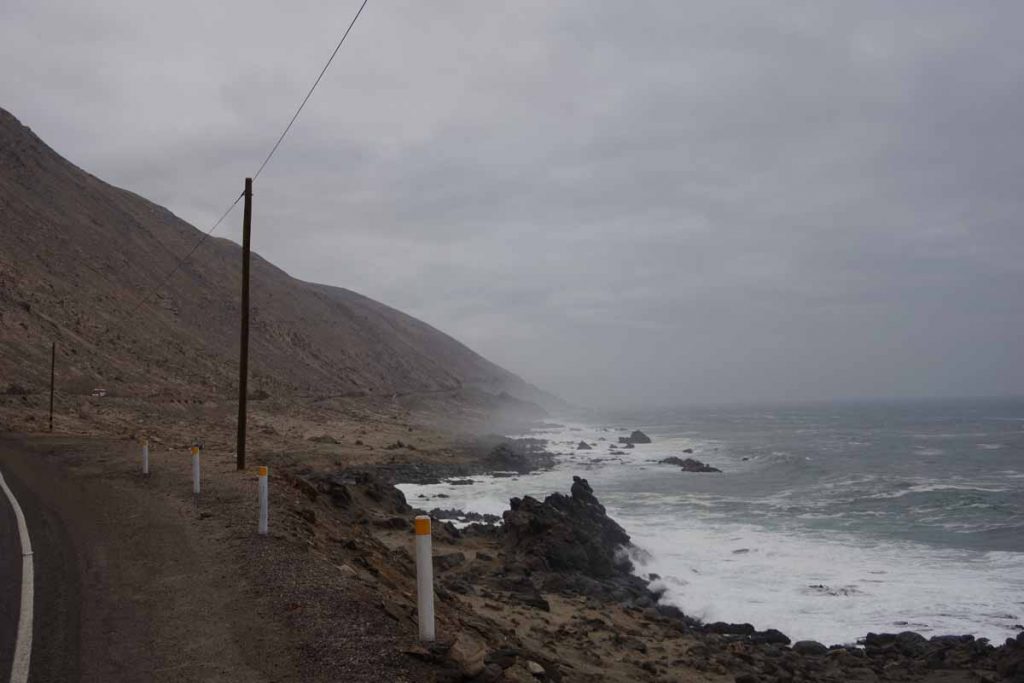 My photos don’t quite do it justice, but ocean brought a lot of white foam. At the day went on it became sunnier. 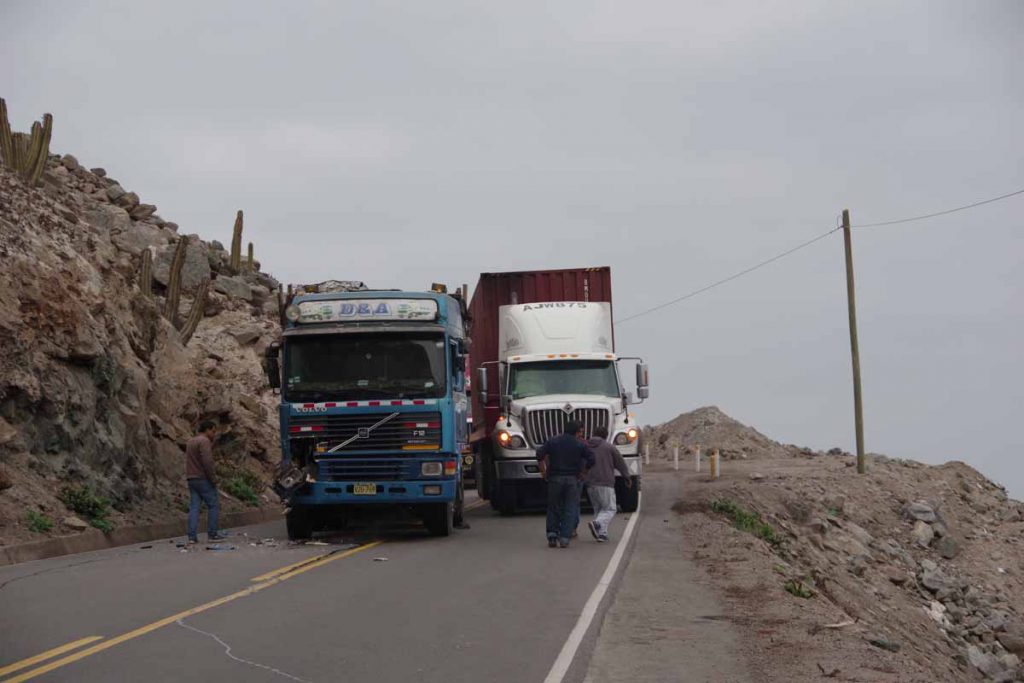 Heard a crash as I was cycling. The truck at left had just come into some collision that knocked out the right headlight. He had stopped and now the truck at right was trying to inch past. There was a backlog already building behind. Also shows that a bicycle needs to take some care since the lanes aren’t much wider than truck widths. Fortunately, most of the trucks were traveling slowly. 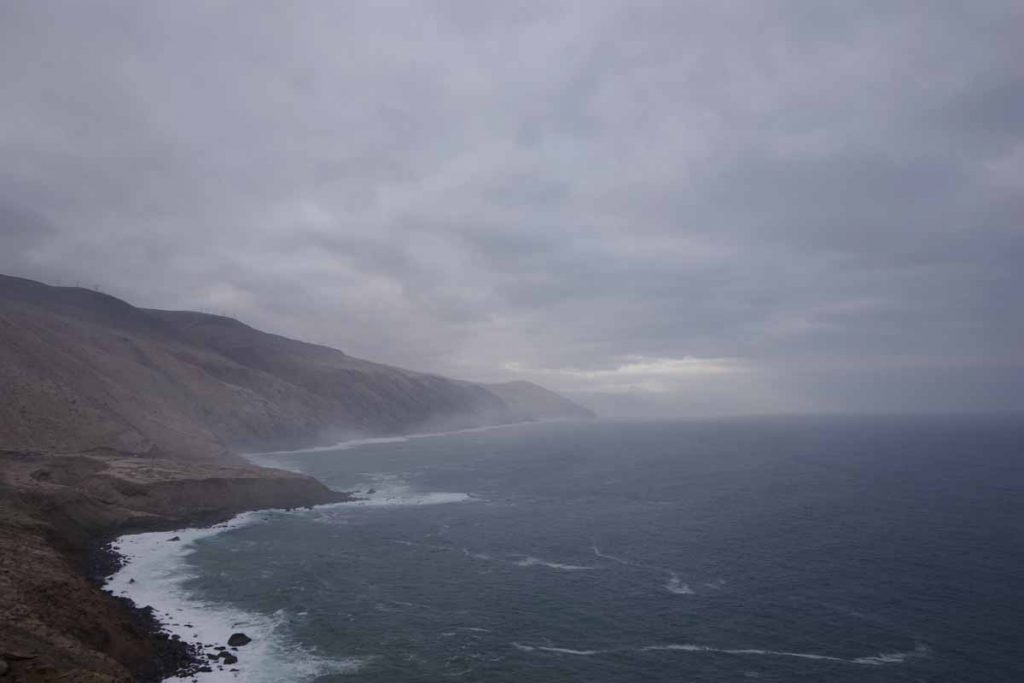 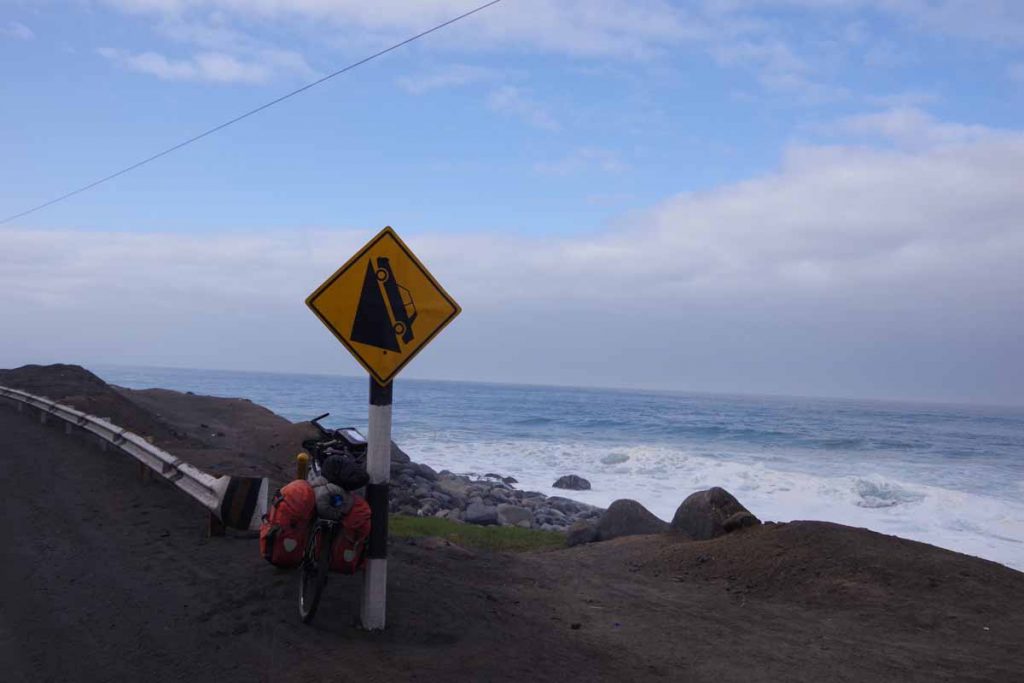 The hills weren’t quite this steep, but there was definitely some climbing today. 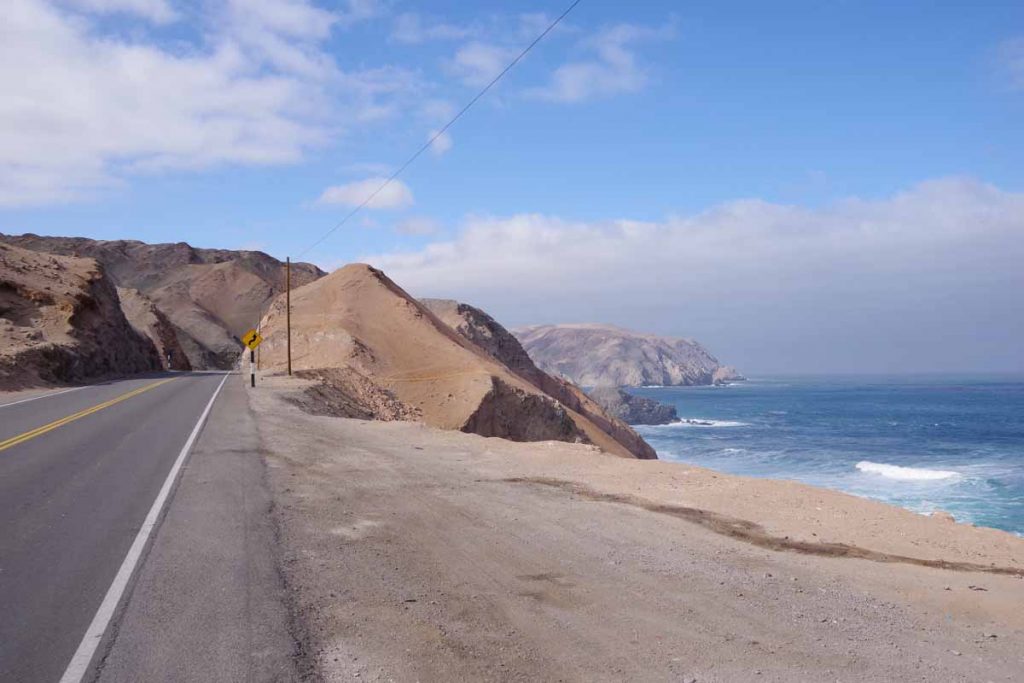 By mid-morning the overcast was lifting and it was becoming sunnier. 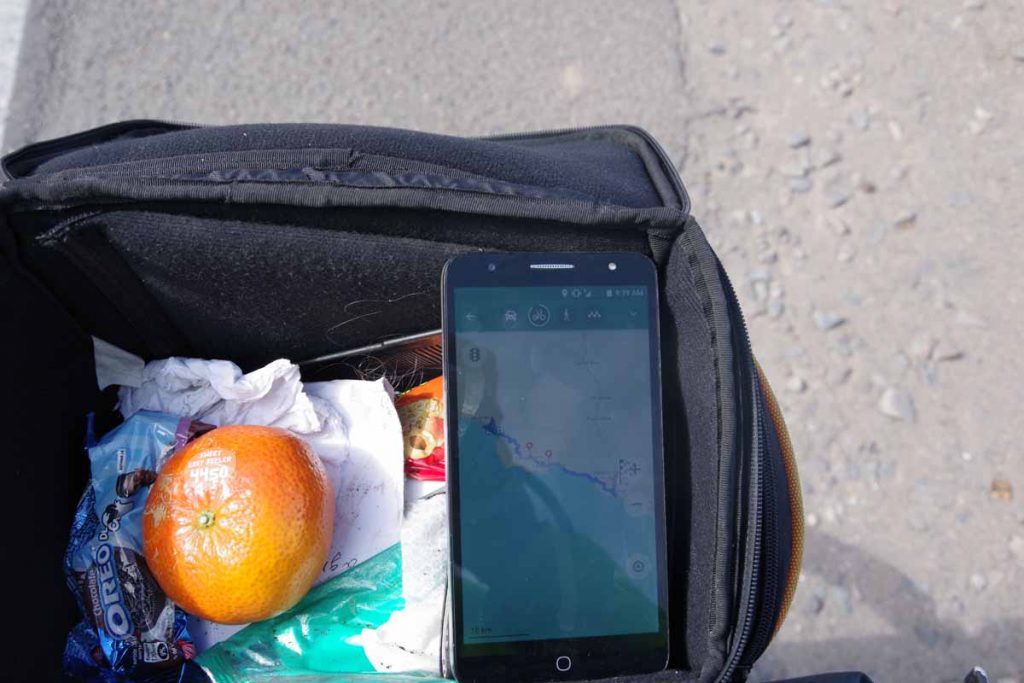 My handlebar bag. The cell phone app is giving me distance to Ocono. The mandarin Orange has a UPC code of 4450, same as it would have in a supermarket in the USA. This suggests to me that some of the oranges in Peru are grown for an export market. Not necessarily the USA but otherwise you wouldn’t put a UPC code and “sweet easy peeler” on the sticker. 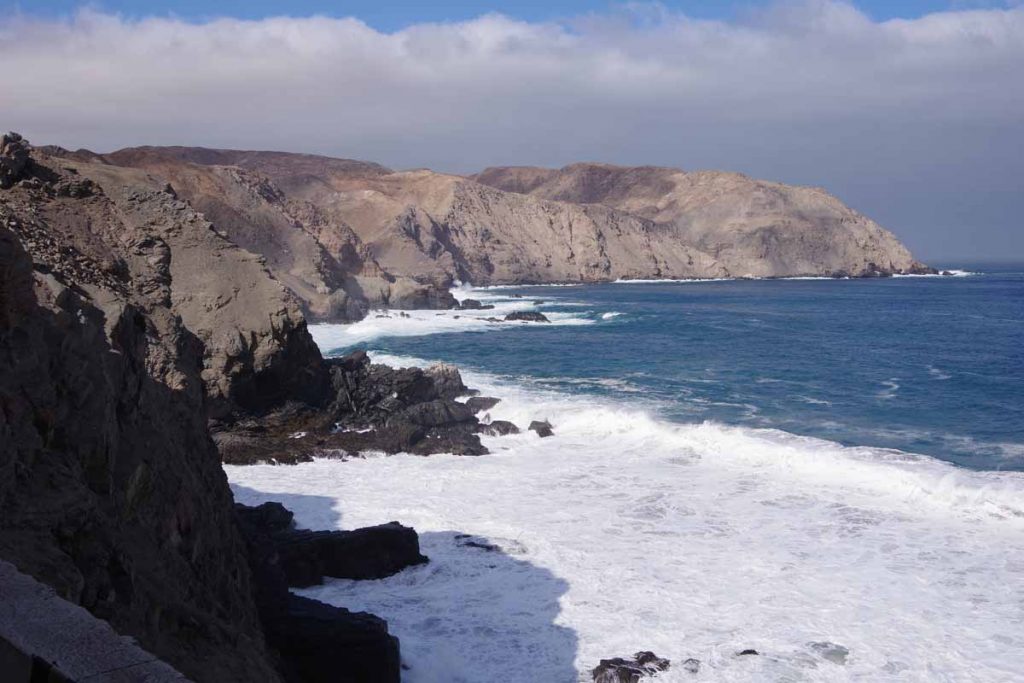 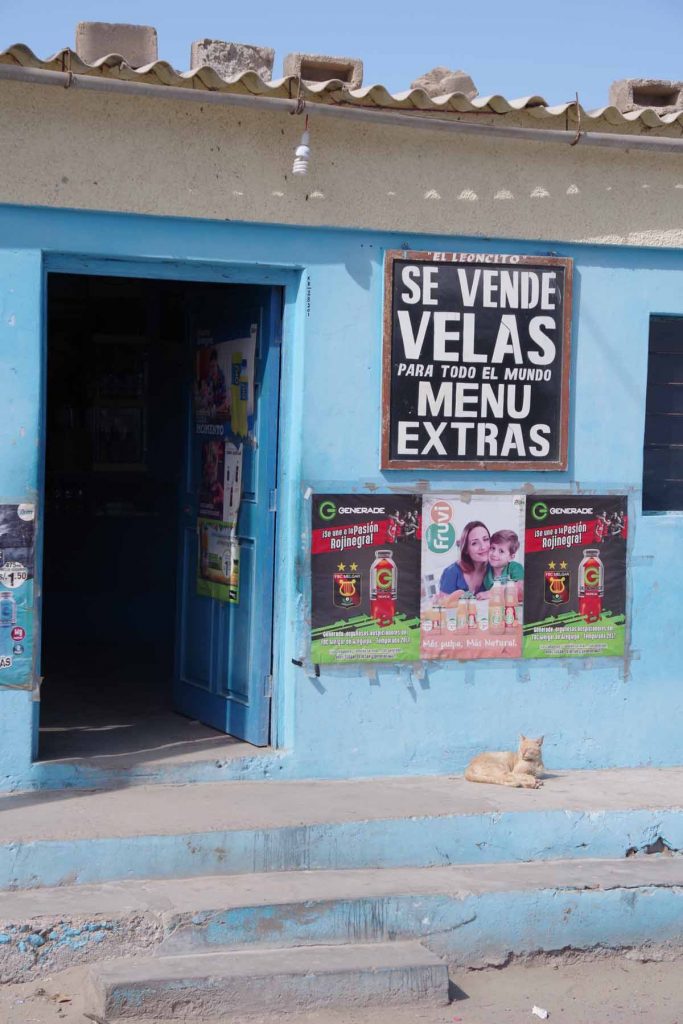 One of the shops I stopped at. The cat was out sunning itself. 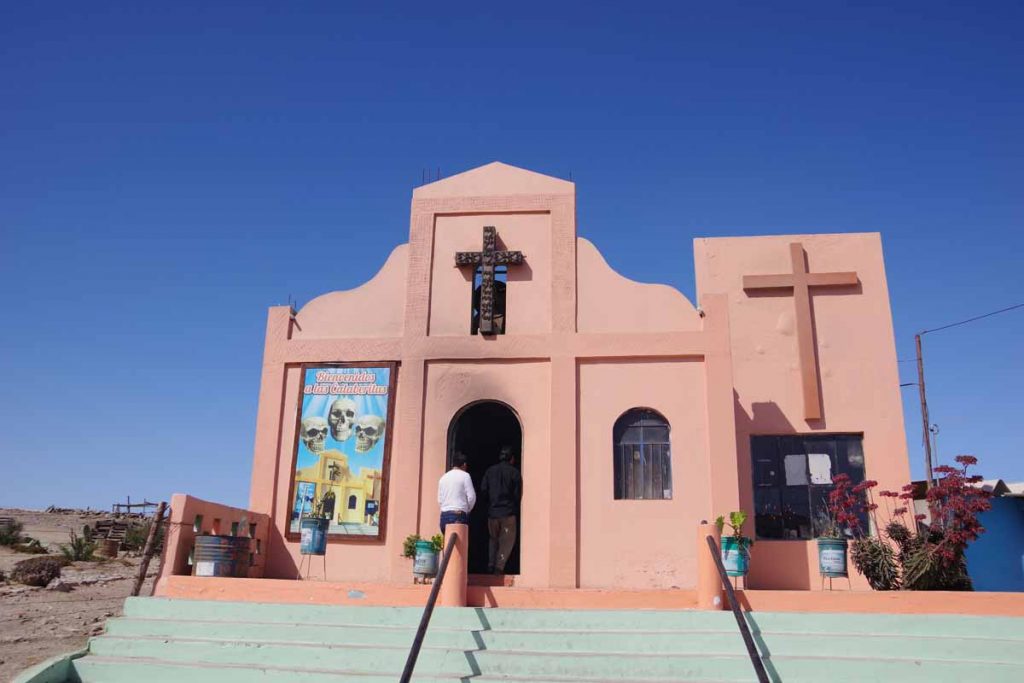 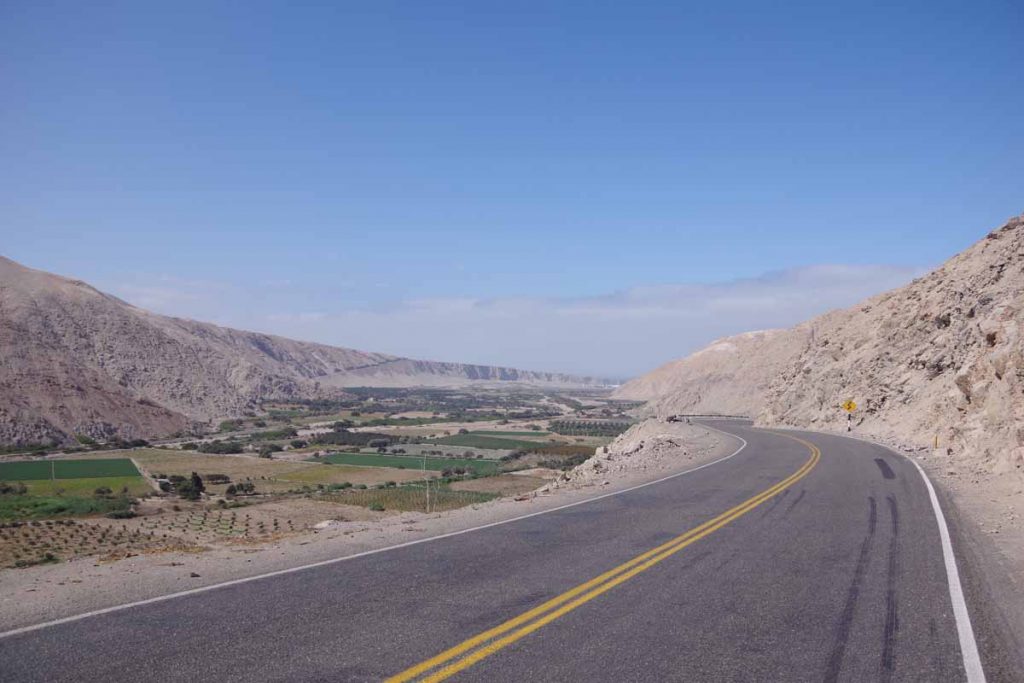 The route crossed over the hills and then across this low valley. 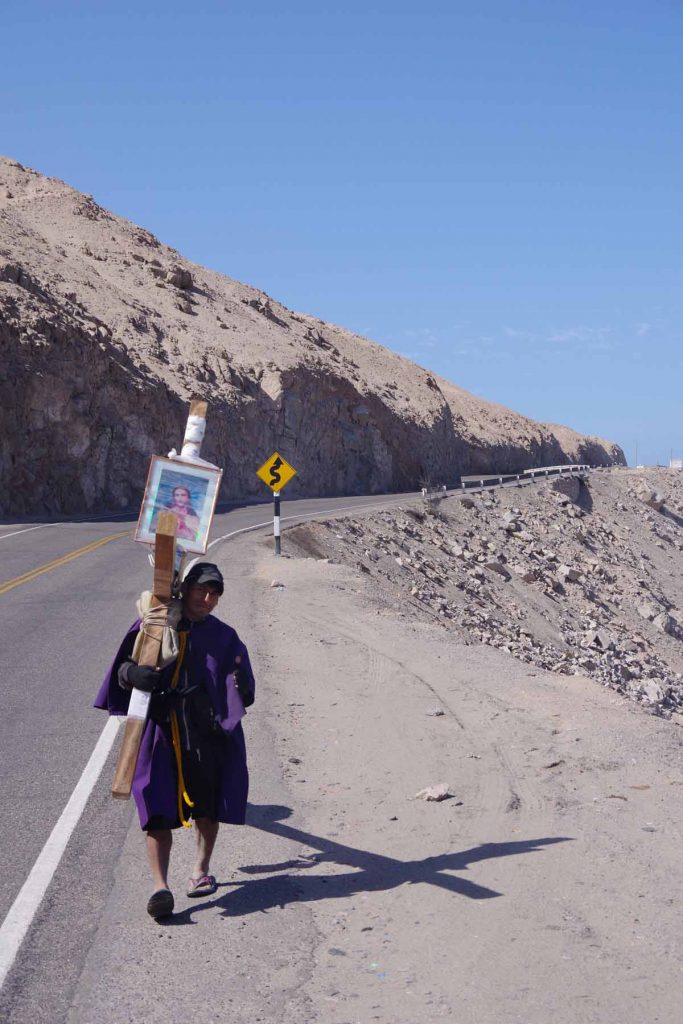 Met this pilgrim on the way. You can see his cross he carries in the shadow. It has a wheel in the back. After talking with him, I think they are heading from Tacna to Piura. As you may recall, came through Piura some 1900 kilometers ago. Tacna is going to make it a walk of some 2500 kilometers. 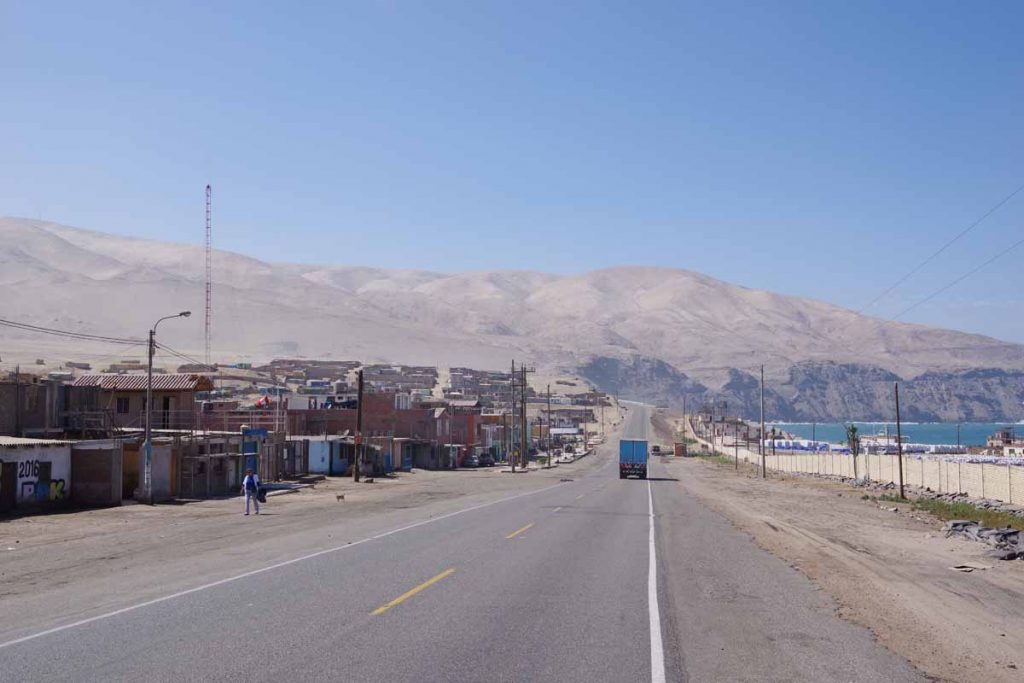 Another of the towns. This one had a nice looking hostal. 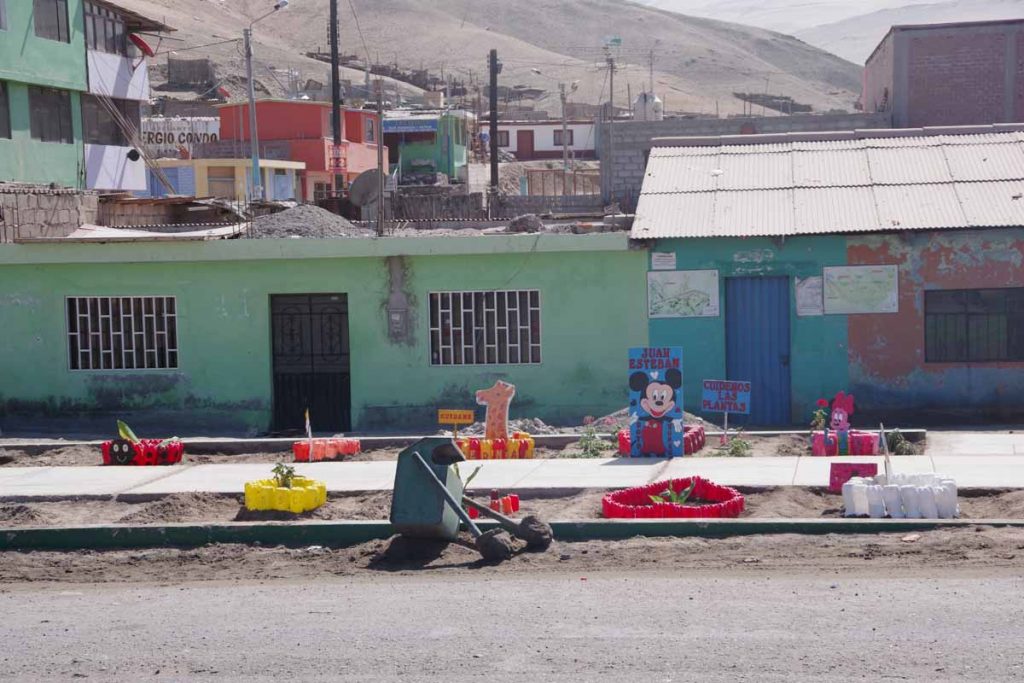 It also had a nice community garden. Not a huge amount of plants and the ones there were protected by these wind breaks. 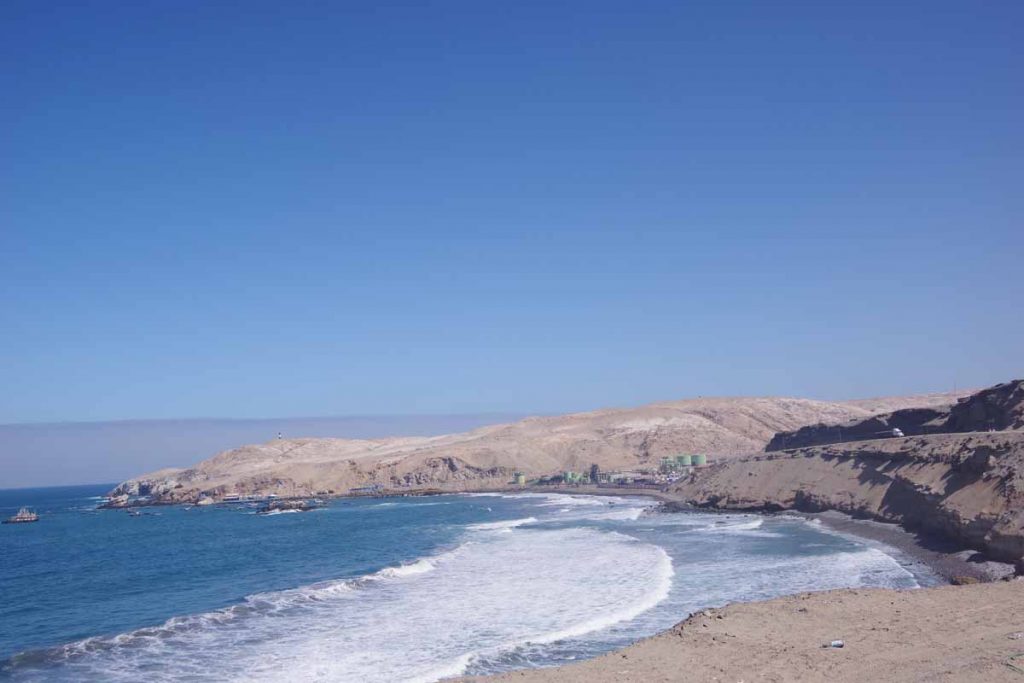 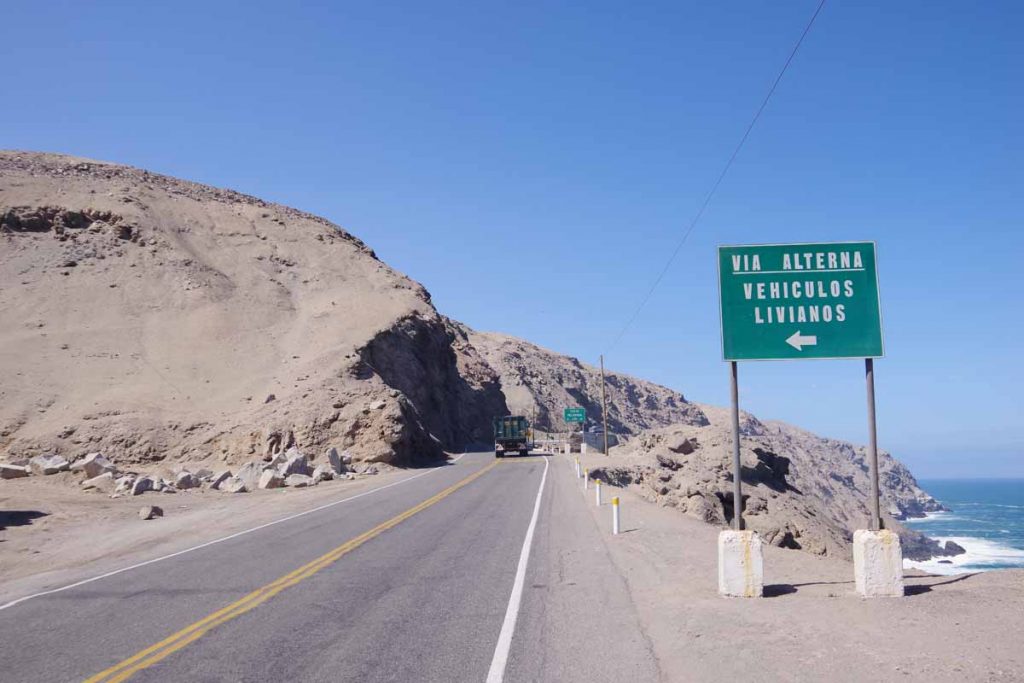 There was an alternate route for light vehicles. 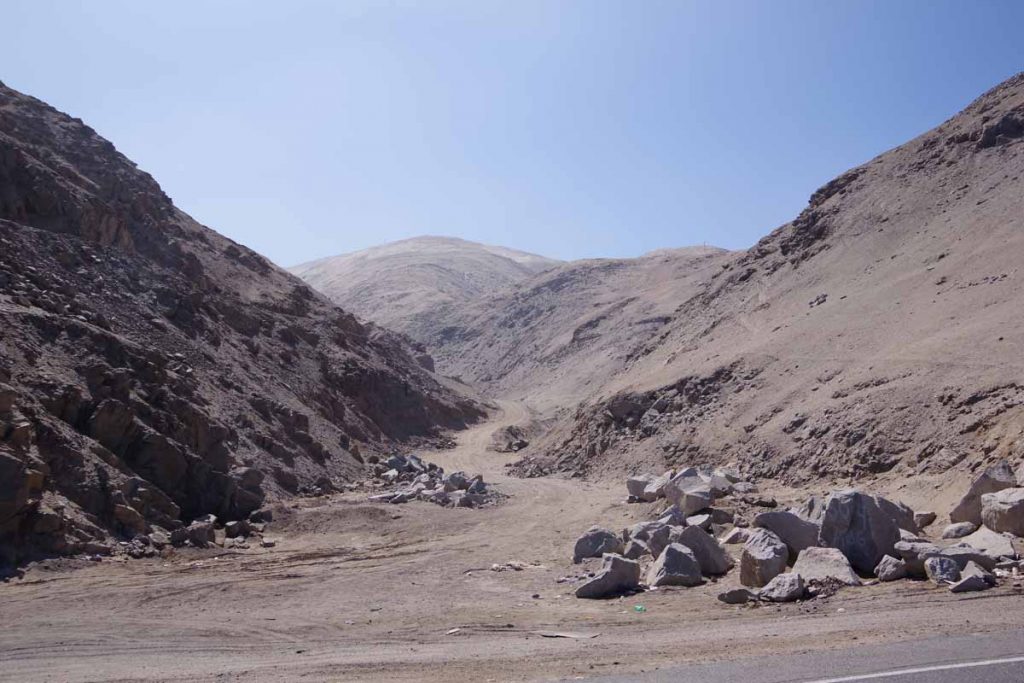 This is what it looked like. I decided to stick with the regular road. 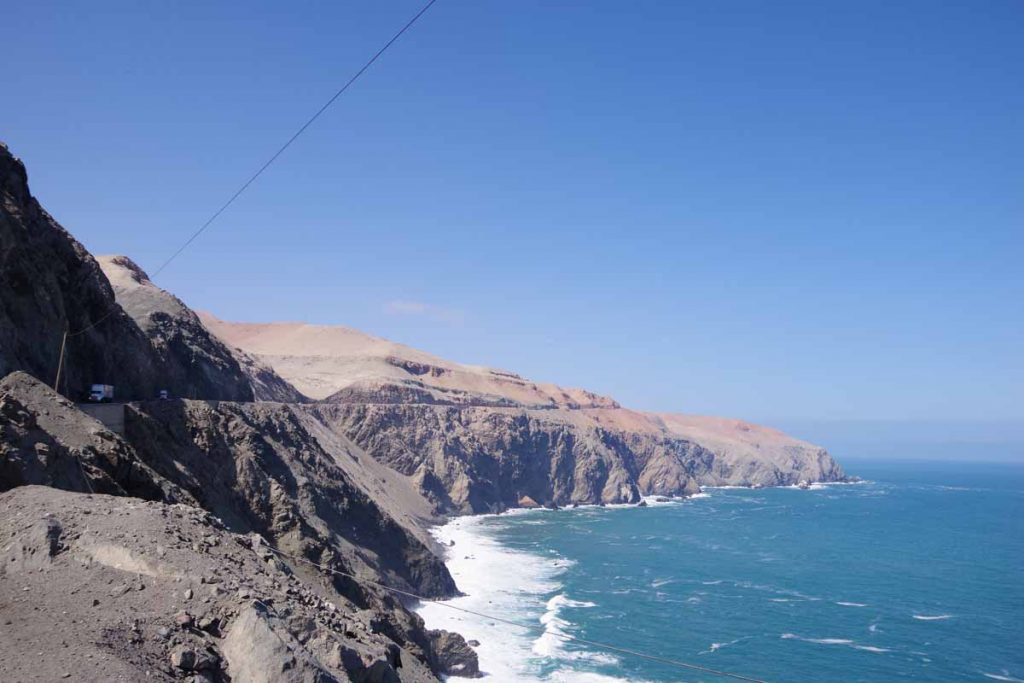 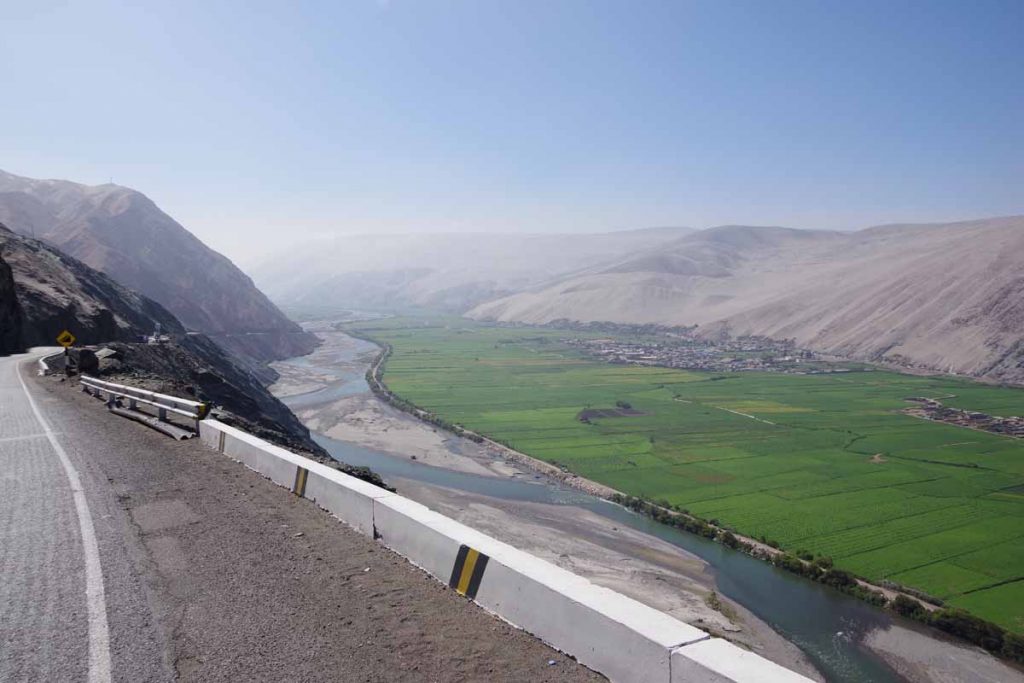 This was the valley that contained Ocona. The road first descended to a bridge and then came back to the town. I saw a hostal near the bridge but first decided to go to town. 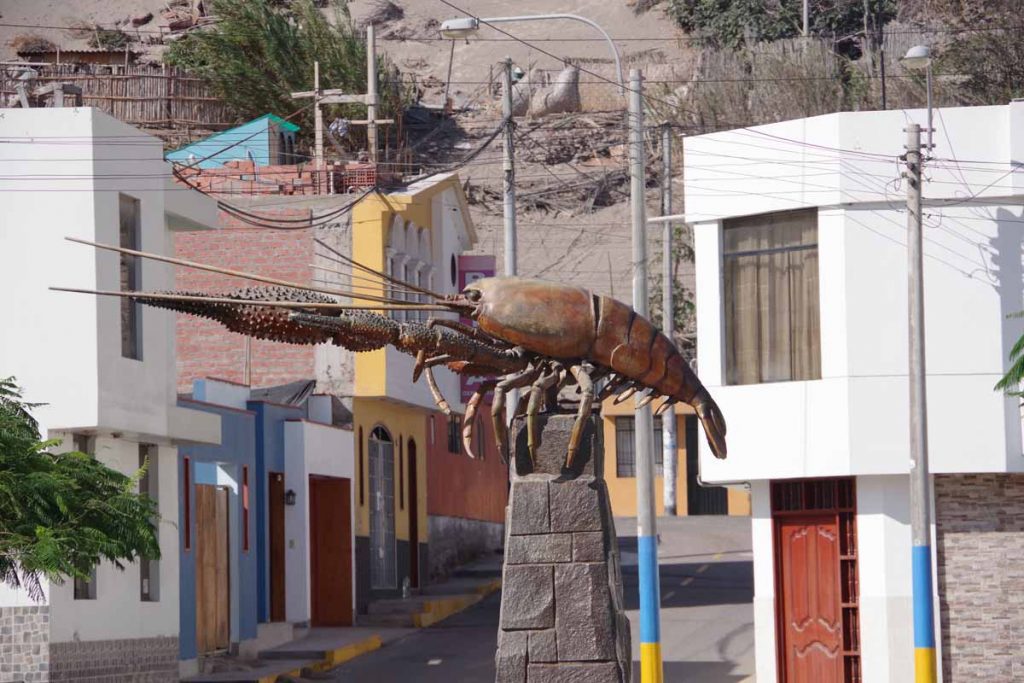 This crawfish was symbol at the town square. I couldn’t find a hotel here despite asking several folks. Decided to cycle back two kilometers to the previous hostal only to discover it wasn’t in business anymore. Now I went into search mode. Found a guest house after some looking. No wifi though, so this report will wait until I do have an internet connection.
Day Two
Interesting hotel/hostal last night. The owners eventually showed up and one woman was suprisingly loud as she was talking in animated voice over the phone. Someone else decided to start watching TV at 4am and the turkeys next door (actual turkeys not people) were also gobbling in the night. It was the lowest price I paid for lodging in Peru and reflected this. 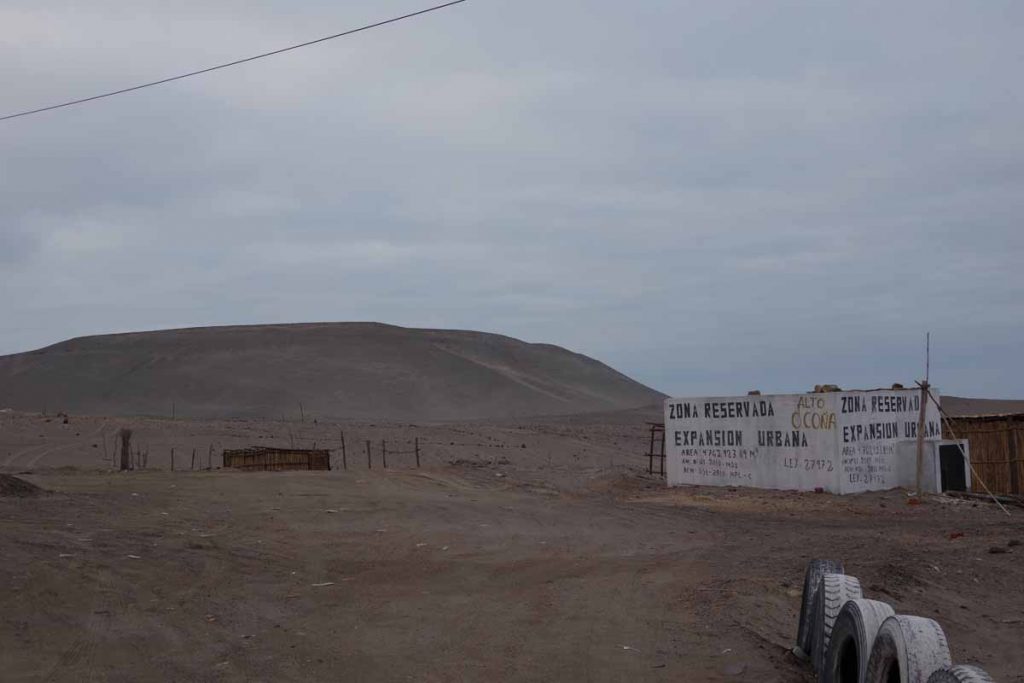 Back on the road this morning. The coast was much less spectacular today with less climbing and a bit more wind. Here on the outskirts, the building tells us it is reserved for expansion of the urban area. They have plenty of room. 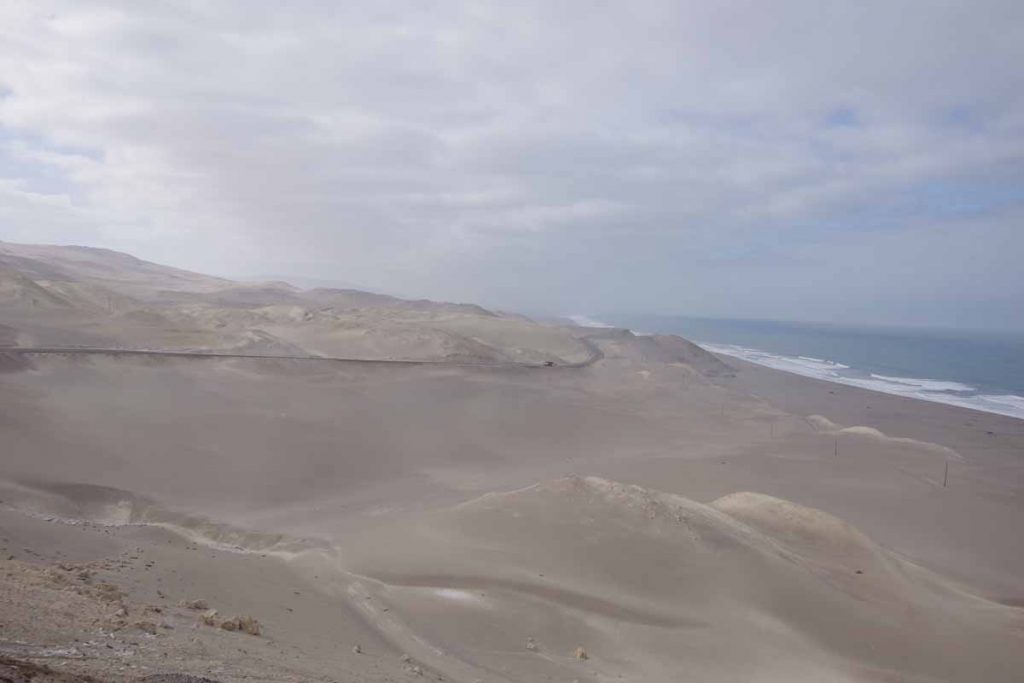 The route started with a 300m climb up a large hill and away from the coast. It ducked out and away through mostly barren areas before coming back at 26km. 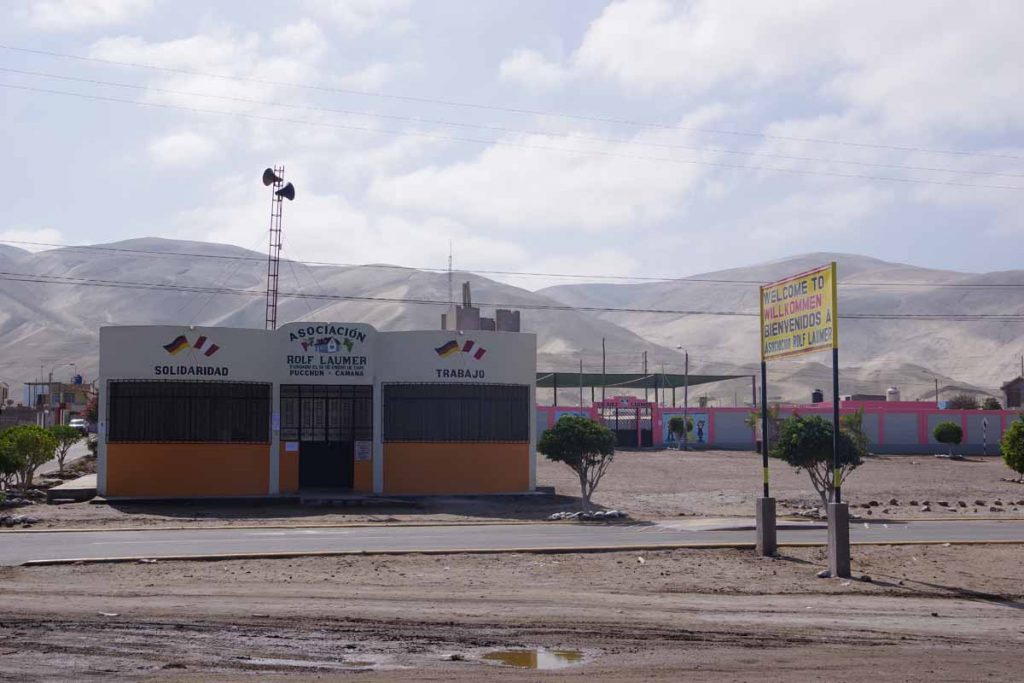 There was a sequence of villages here including one that had this German/Peruvian association building. 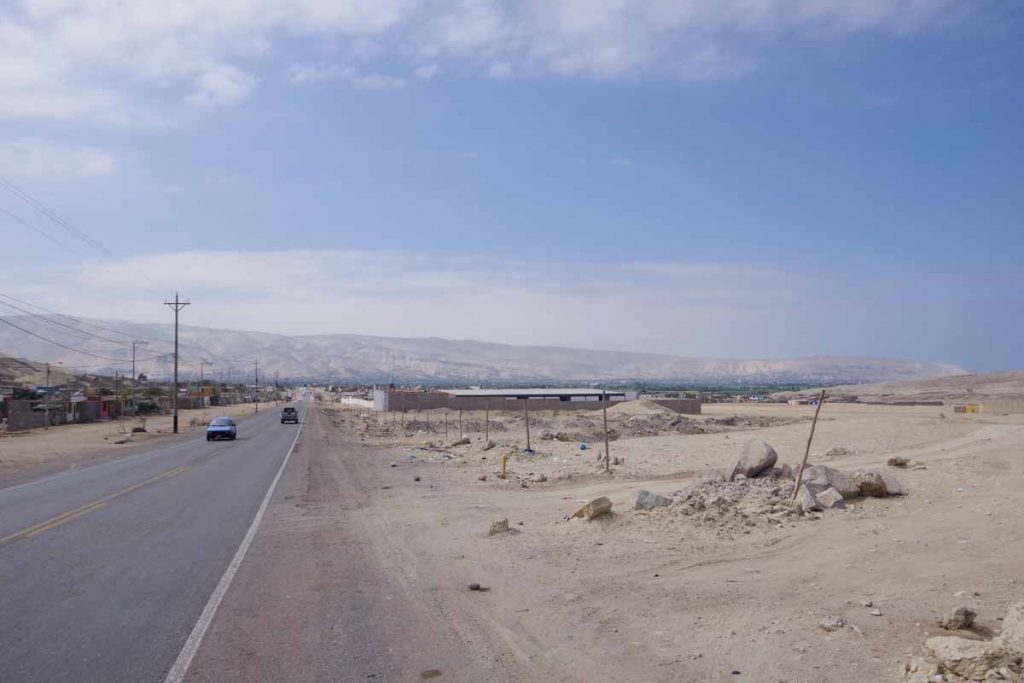 On the right, next to the ocean were agricultural fields and then the road with the villages. 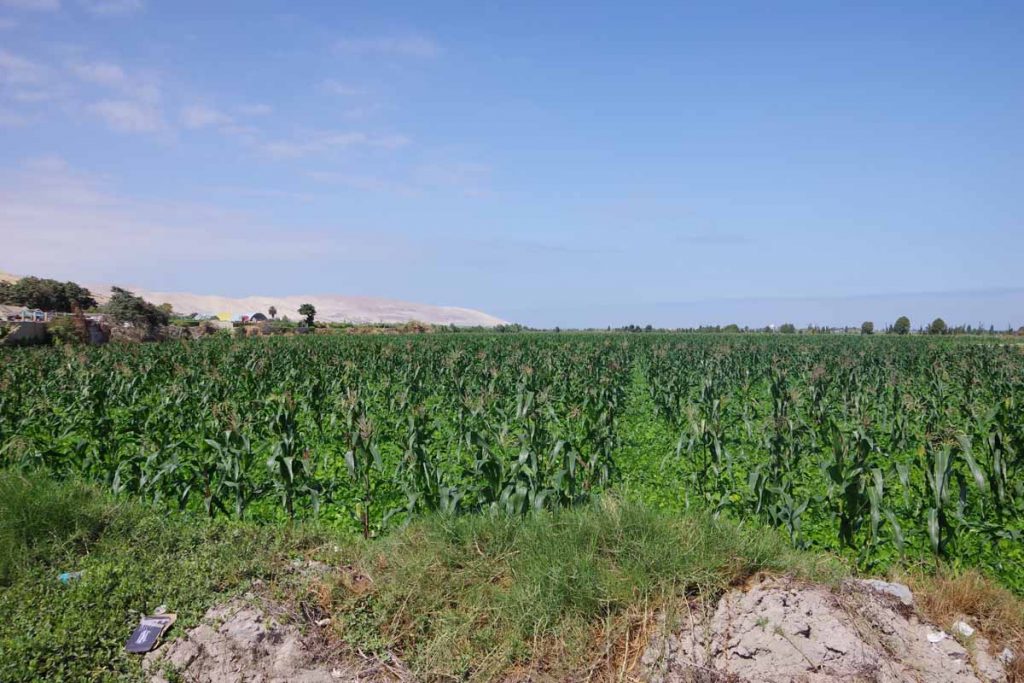 Camana itself was in a larger valley with fields. Corn and beans were planted in the same field. The corn was neatly lined in rows. 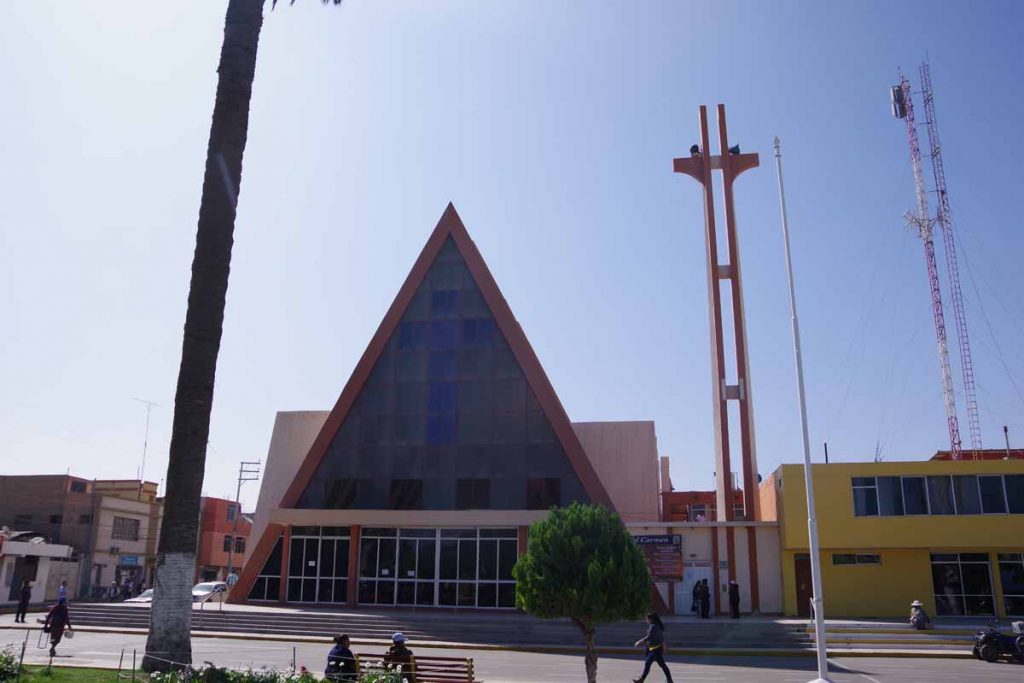 I made my way to the main square where I found this church as well as a reasonable hotel. Apparently Camana is a resort area where people from Arequipa can come to the sea. Arequipa itself is another ~180km away and further up the hill.

From here I have another 10km of coast before starting my climb first to Arequipa (elevation 2300m, 7600ft) and then up the Altiplano (highest elevation 4500m, 14,800ft). Once I leave the coast, do not expect to come back to the ocean until Puerto Montt.

Cycling Peru’s coast has been interesting. Some general observations:

Overall, I enjoyed riding the coast but now also looking forward to a change as I see the Altiplano. I’ll probably take a few rest days in Arequipa as it is the major town before the climb. Also get a chance to let my body adjust to a little bit more altitude. I also expect a bigger day/night swing in temperatures so will need to learn to stay in the warm tent for a bit rather than trying to ride right at sunrise. La Paz is pretty much due east of here so the days will stop being shorter and instead both sunrise and sunset will shift earlier.

First several tough days of climbing to get just to 2700m and to Arequipa. Not sure how much internet I’ll find along the way.