Easier than expected crossing of the border into Bolivia. 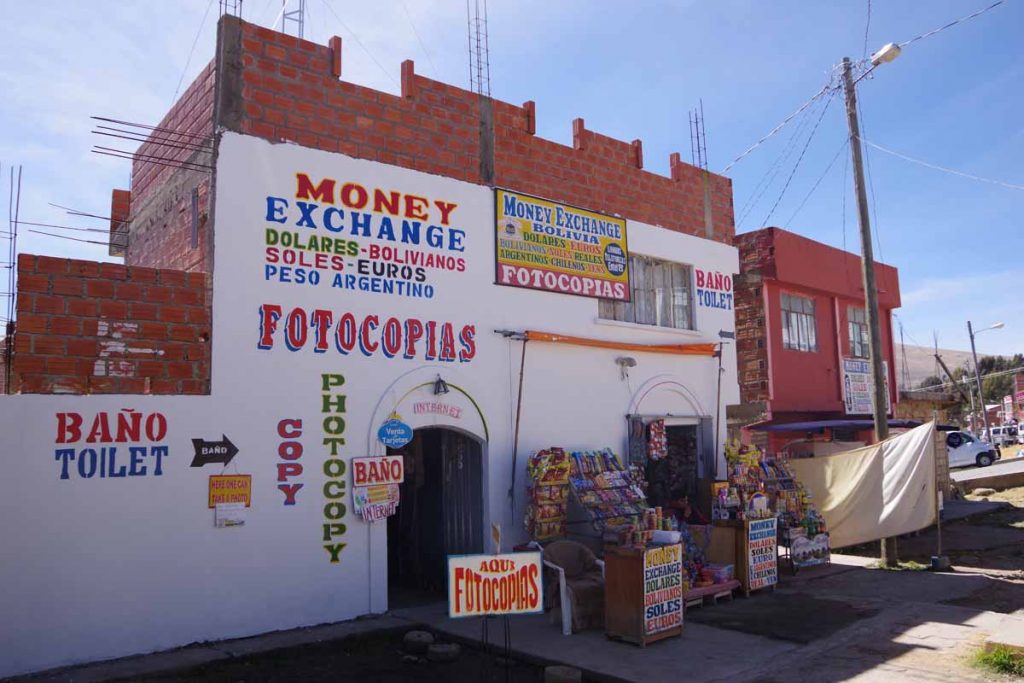 Bolivia is the one country that requires a more formal visa in your passport, at least for those with a US passport. Canadians, Europeans, and others from Latin America have it much easier. One can get such a visa in advance, though also at certain border crossings. I looked a bunch on the internet and one site suggested 10 items as necessary:

I spent some time in Puno getting the photos and copies made of what I could. I put together a rough itinerary that included roughly 16 riding days and some extra rest days so I had some margin and wouldn’t get a visa too short. Proof of accommodation was tougher, but in the end, I reserved the first night hotel (tonight) on Expedia and planned to point to my tent and list of places on the itinerary to suggest several were picked as places with hotels.

Proof of departure was a bit tougher. The internet suggested one technique was to have an airline or bus ticket, print the information and then cancel. That seemed a bit strange. In the end, I decided to argue, if necessary, that my loaded bicycle was proof of departure and printed out a page from my web site that described the overall goal of cycling from Alaska to Argentina.

When I actually got to the Bolivia immigration line, it went smoother than I expected. He very quickly acknowledged the documents, stapled them together with the photo and entered information into his computer system to print off the visa. I actually think the yellow fever document might have helped since he even looked a bit surprised to see it in my document stack.

For those who don’t quite have everything together, the photo above shows a very nearby internet cafe and photo shop that one can use to quickly put together missing items. 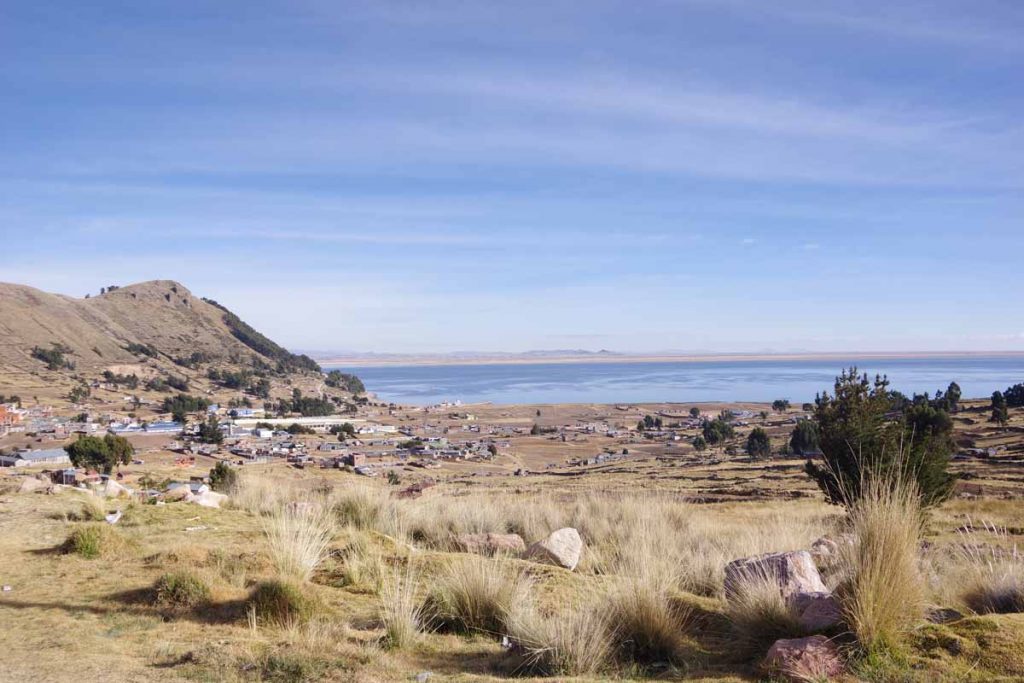 Riding today was a relatively easy ride along the lake. 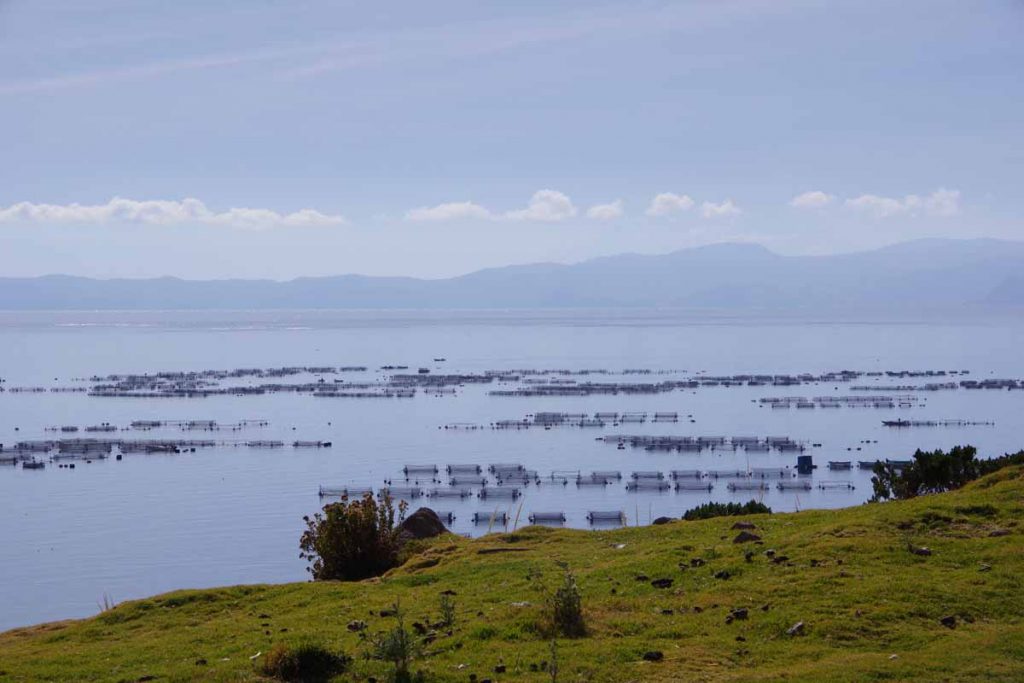 Some fish traps I passed. 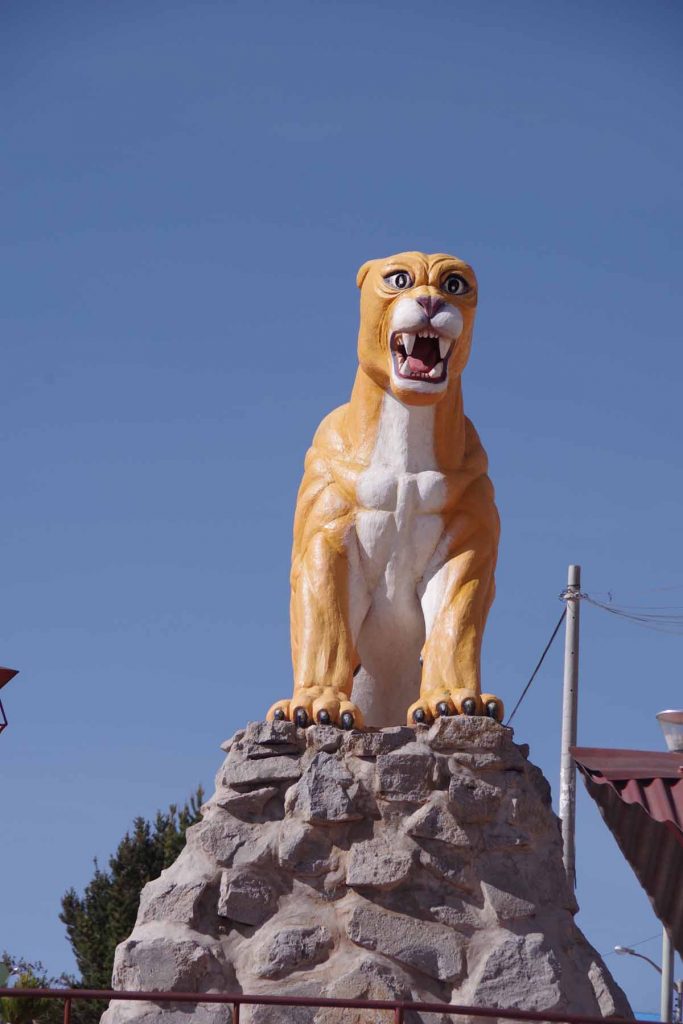 Entrance to one of the villages I passed had a large tiger. 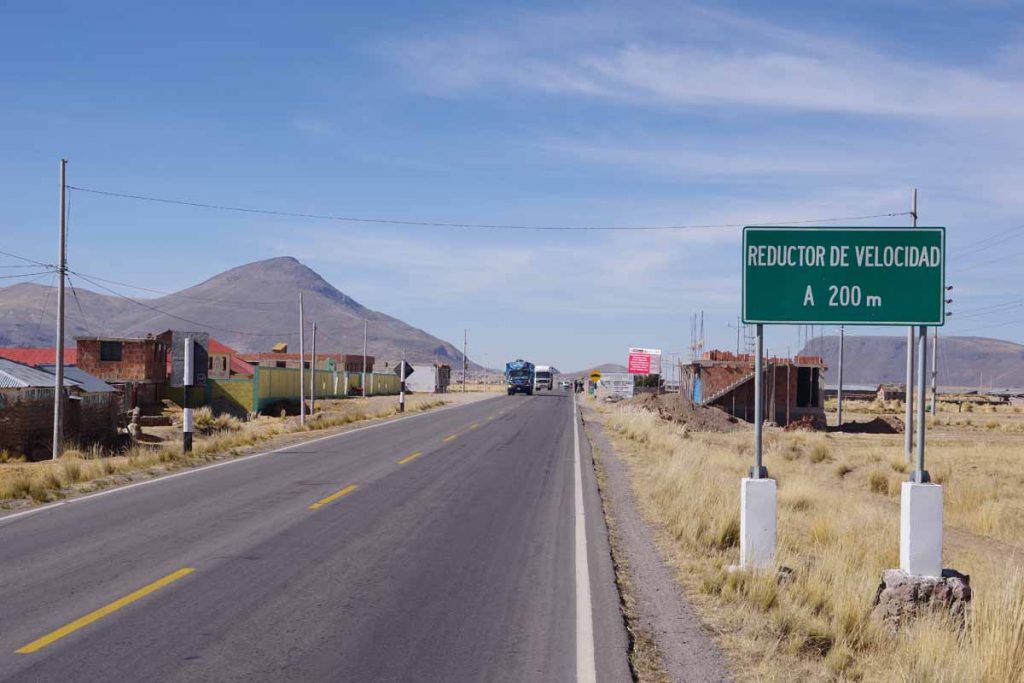 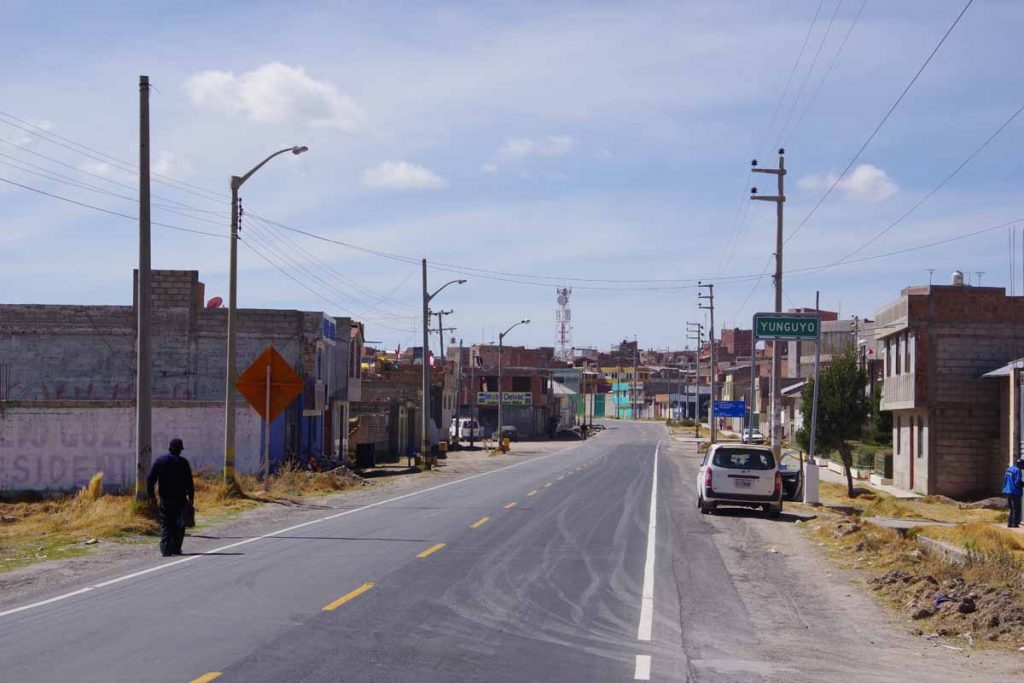 Last little town on the peruvian side. 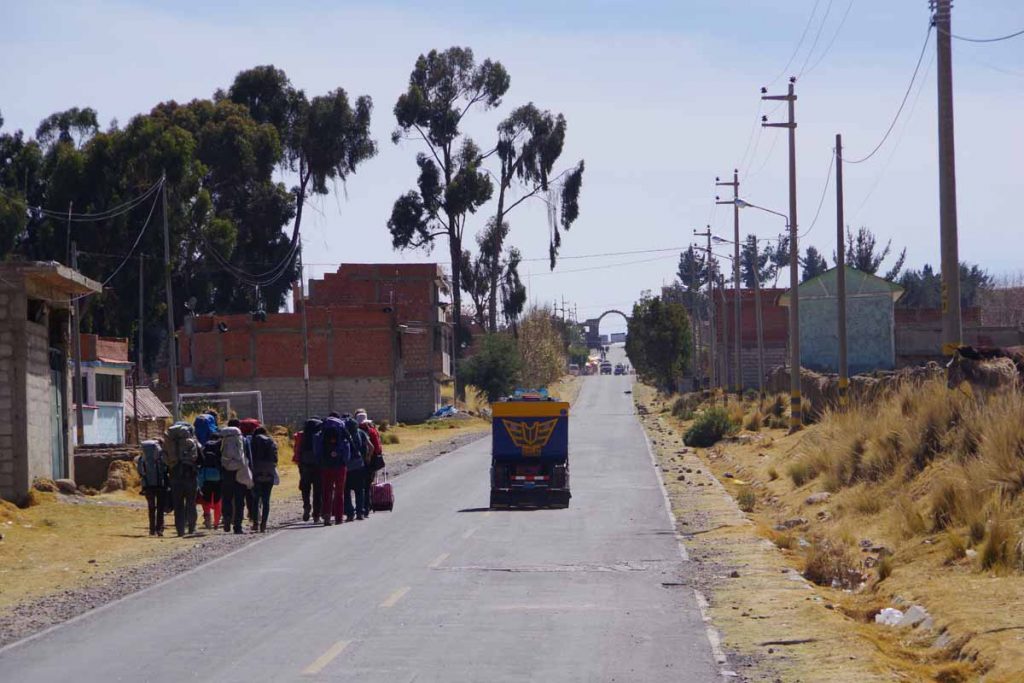 These folks were walking the last kilometer or two to the border. When I saw them later in line, one explained there was some problem with their bus, e.g. a strike or it broke down. 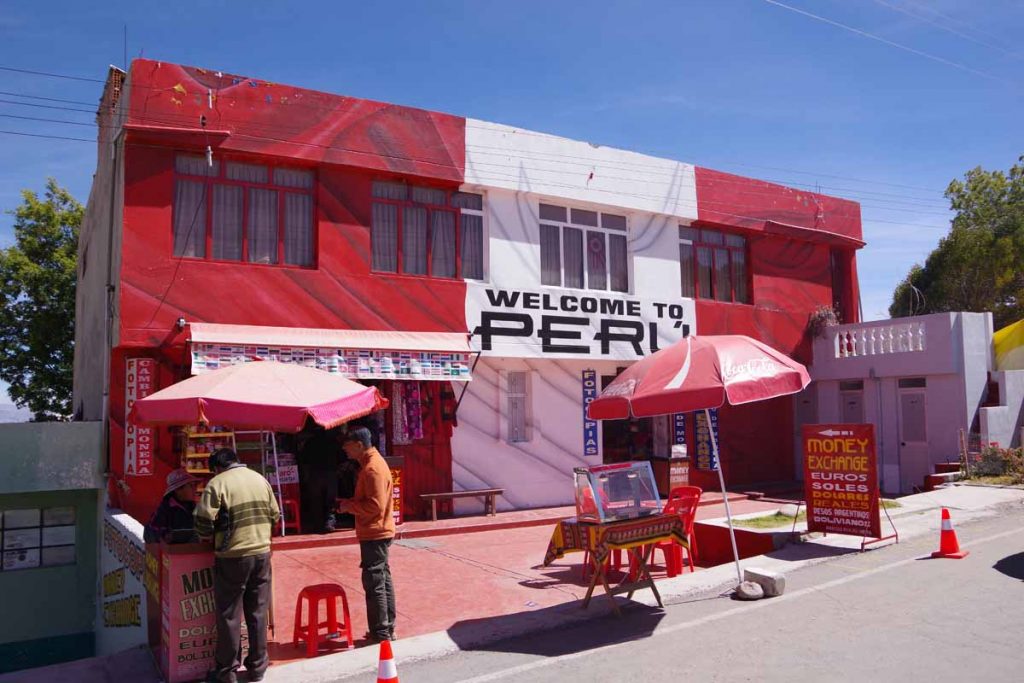 I exchanged my remaining Peruvian Nuevo Soles to Bolivian Bolivars. I was surprised the rate offered was slightly better than my application suggested. I also went to the peruvian immigration to get my exit stamp. 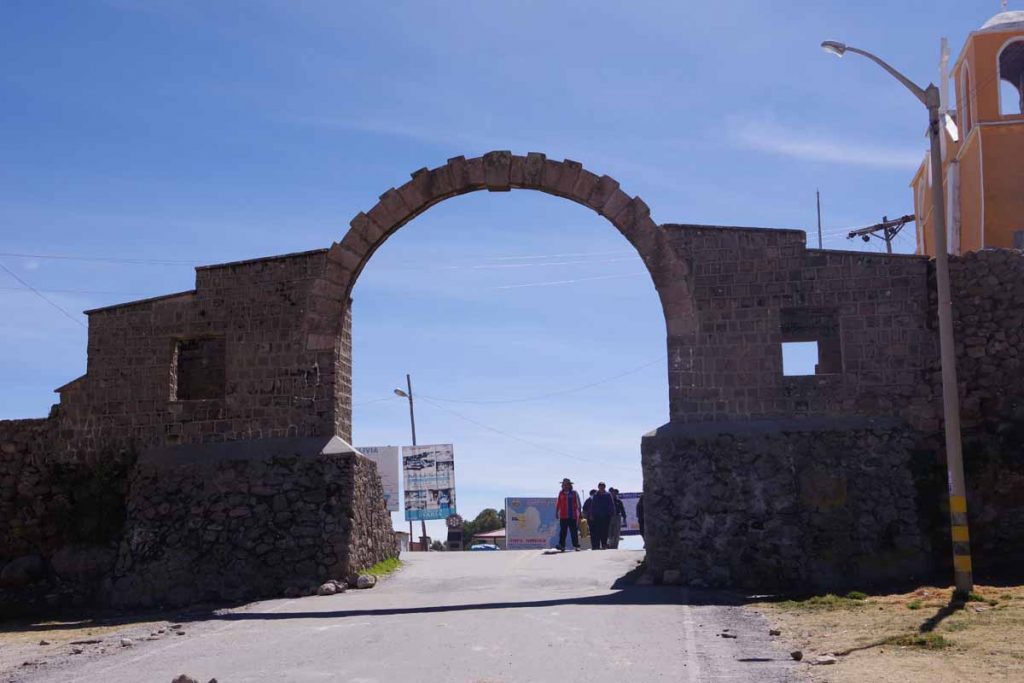 This arch marked the border to the Bolivian side. Immigration office and procedures described above were just on the other side. 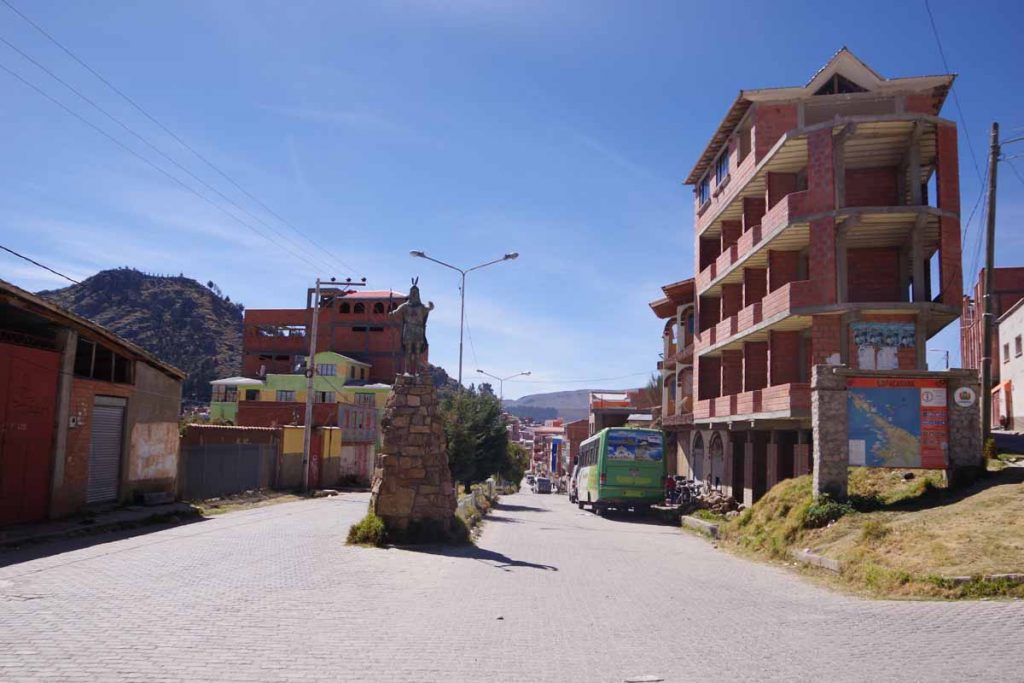 This is a surprisingly touristy town. There are many different hotels and hostals. Even places that will do your laundry in a few hours. I walked down and found a shop that sold me a SIM card, so I should have internet from my phone, at least where coverage exists, and make sure I don’t run out of data. 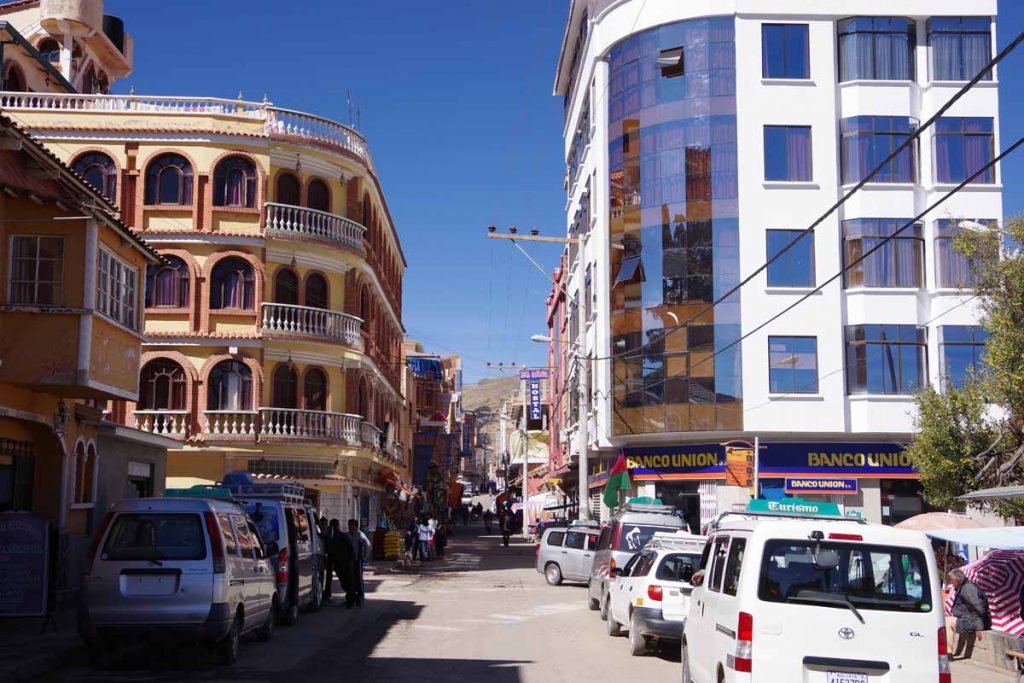 A view of downtown. 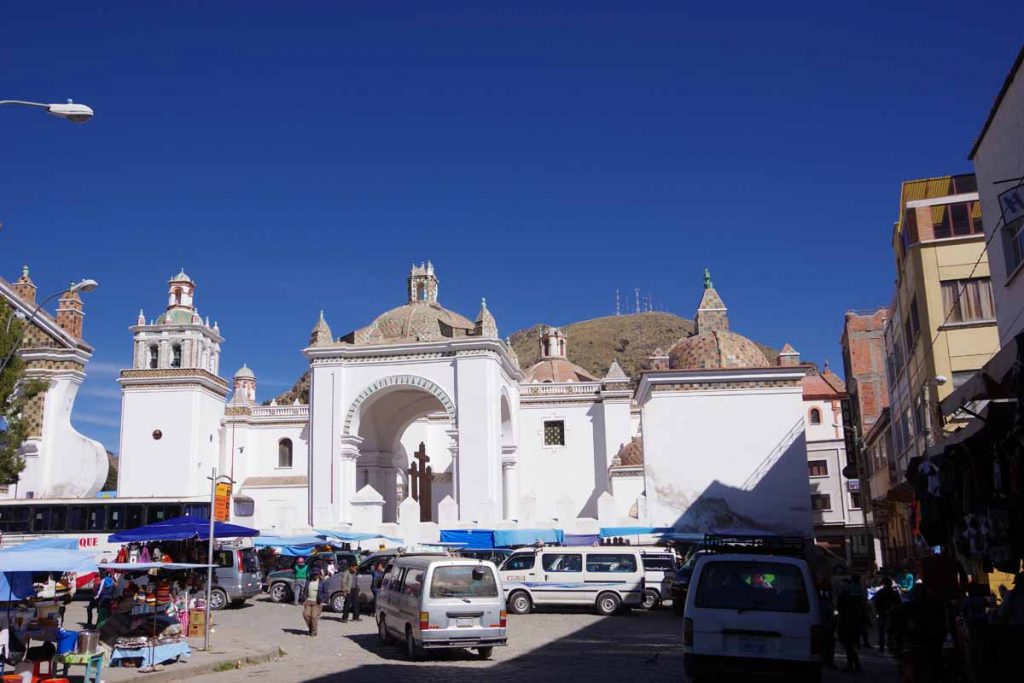 A view of the large church.

Since I had to create a written itinerary, also have a fairly general description of my planned Bolivia cycling split into three stages:

Add some rest days in Oruro and at the salt flats and roughly that is the current plan with Bolivia. Plans are plans and can change, but at least a rough idea.