Three days riding has brought me to Tupiza. The road is rough and unimproved, though they are also busy with a massive road construction project. Overall, I was actually on the pavement for ~40% (80 kilometers) of the distance with the remainder varying between smooth “to be paved” segments as well as awful rutted, washboard, sandy roads.

Day One – Uyuni to Atocha 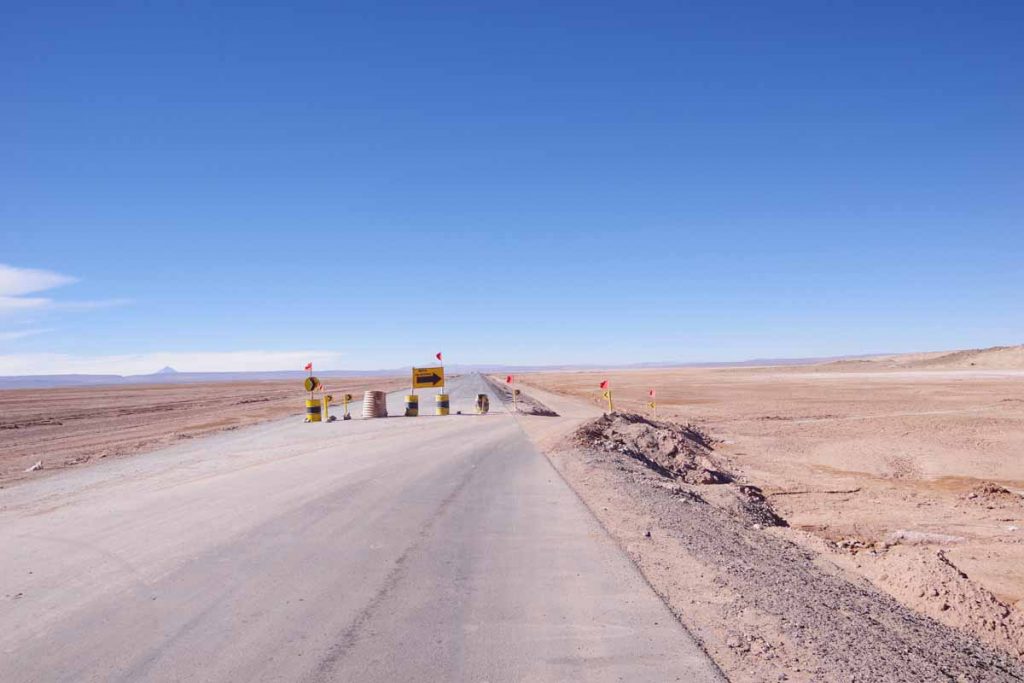 Left Uyuni after a rest day and ready to ride. Getting out of town was bumpy but once I was out, there was 30 kilometers of newly paved road. Hooray! There were one or two diversions such as above, but I could mostly keep straight. 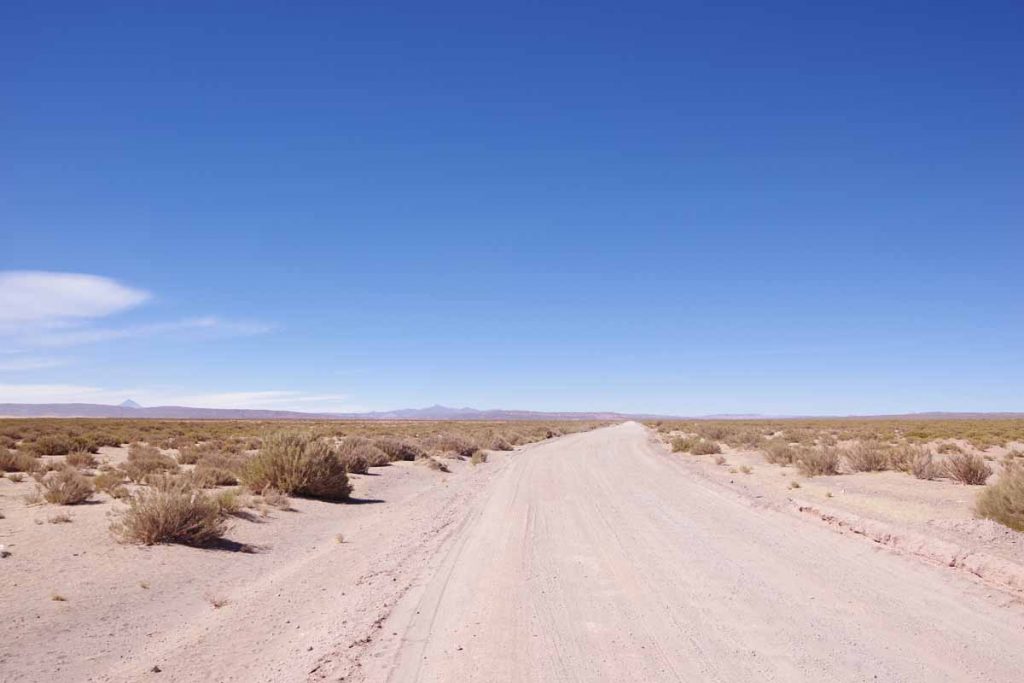 At 32km there was a big split with still new pavement ahead and a sandy track splitting off to the right. One blogger had cut through the left road, but I decided to follow the rules and take the signs on the official bypass. 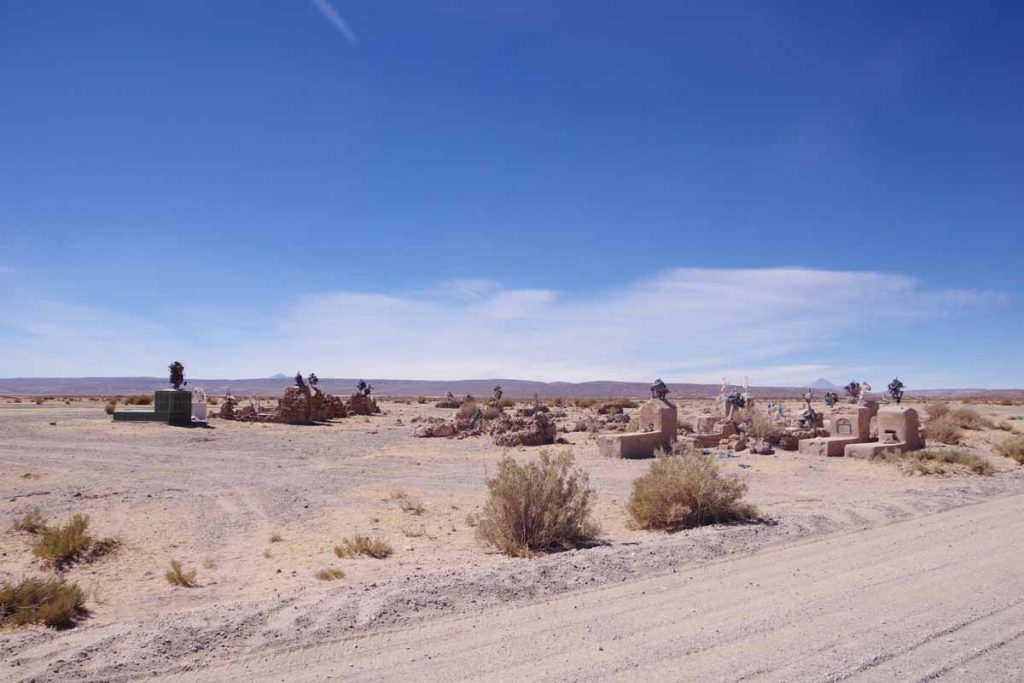 A small cemetery I passed. 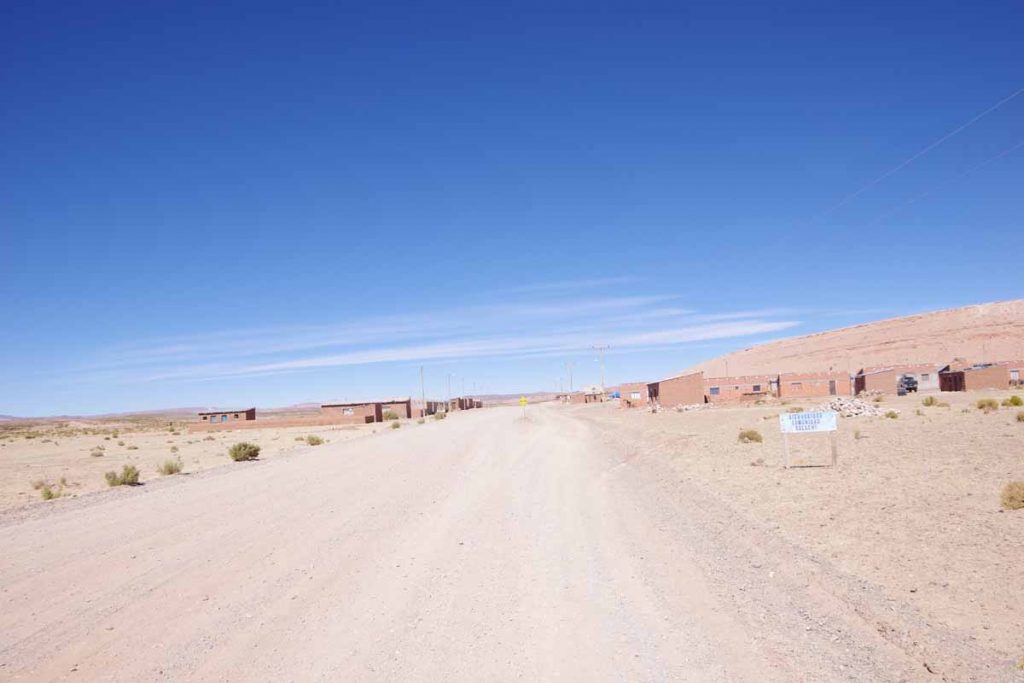 At 55km was this small settlement. No actual stores or businesses but a cluster of small brick buildings to keep out the worst of the cold. 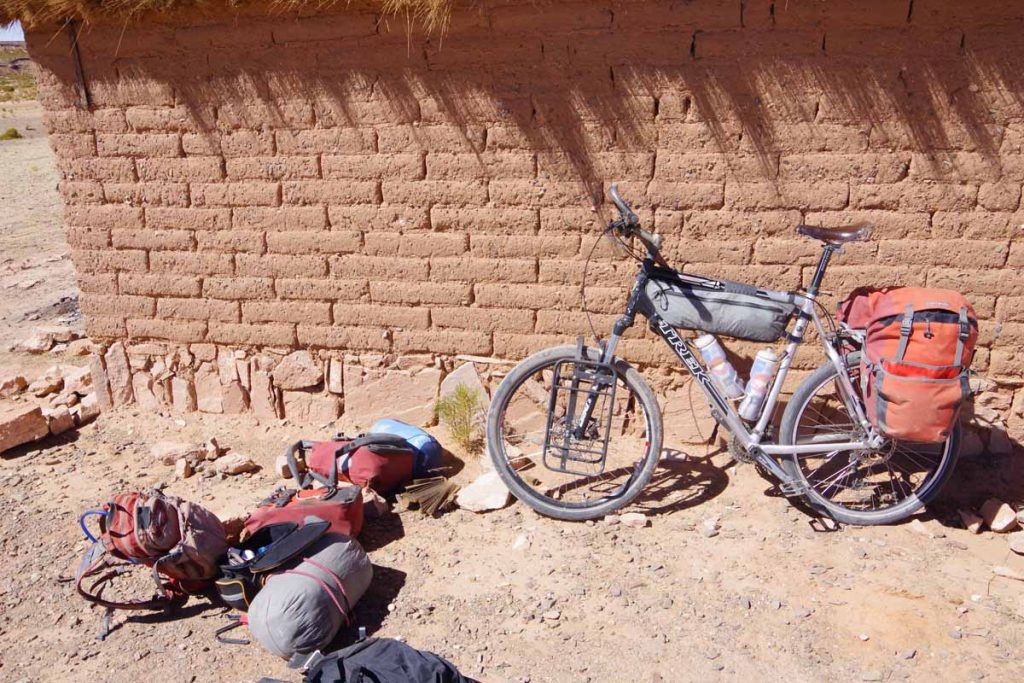 Just as I passed, felt my rear tire was soft. Sheltered from the wind, I took everything apart and then found the problem (small wire) and fixed the tube. 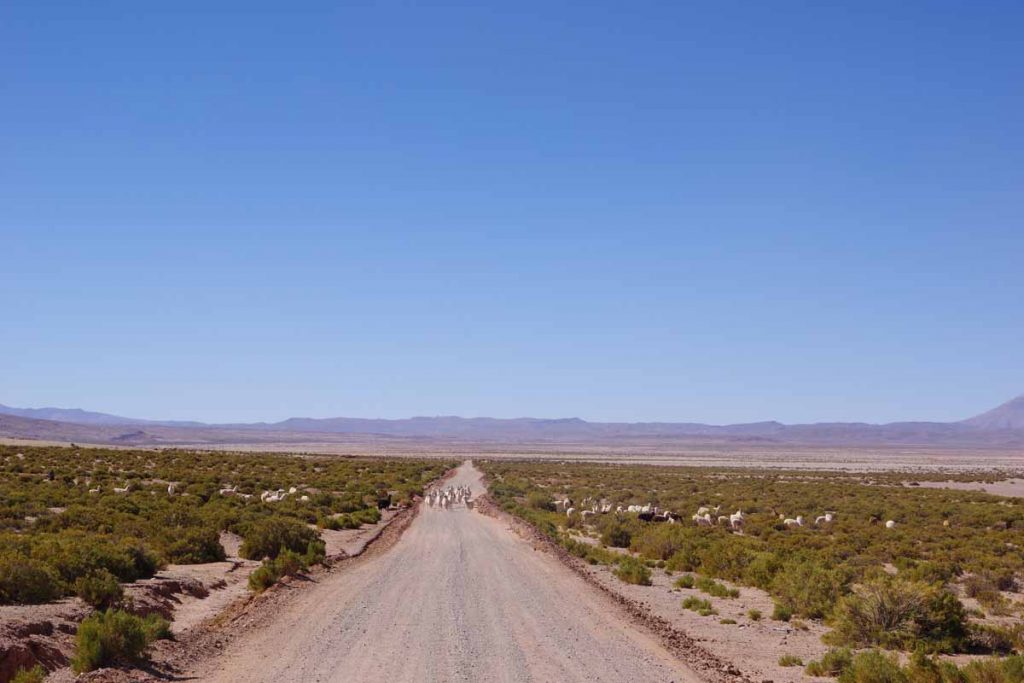 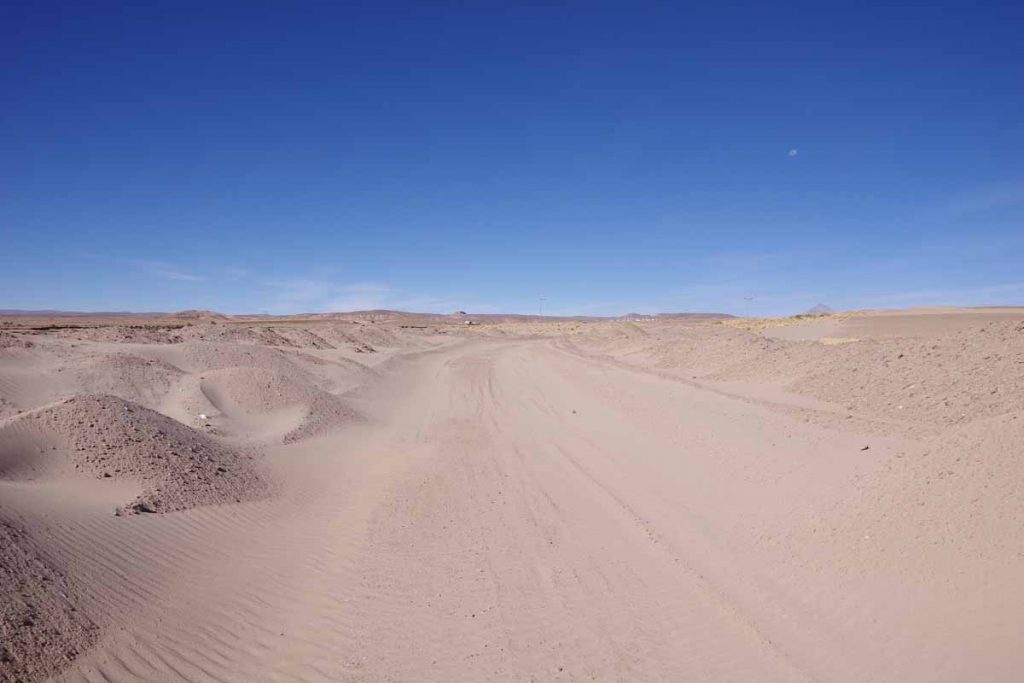 Unfortunately it became sandy for a kilometer or two. I mostly pushed my bike through this section. 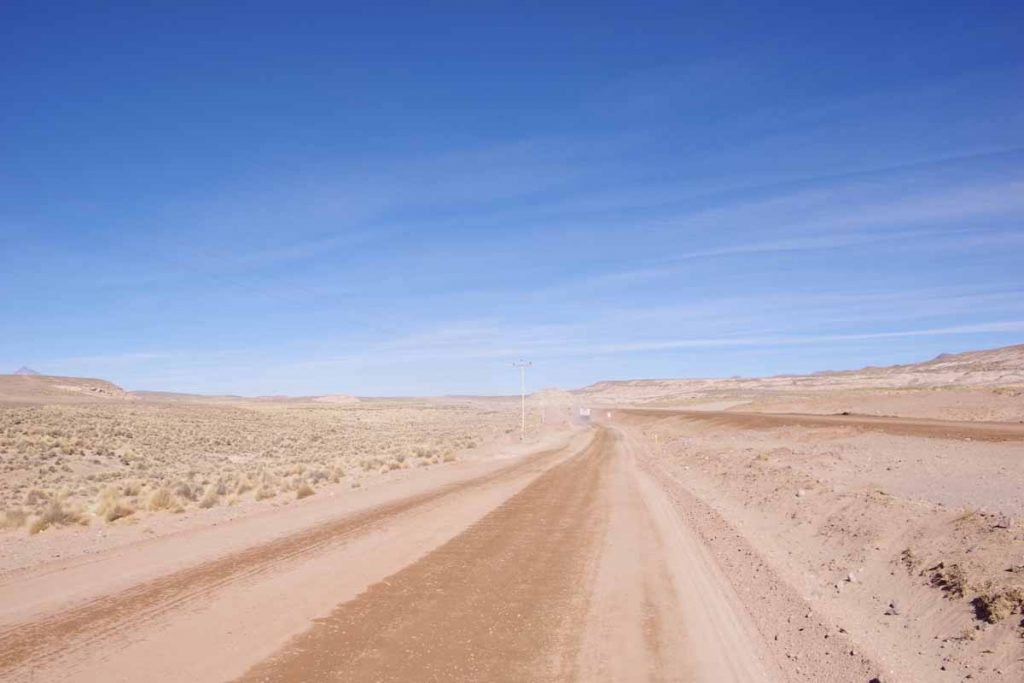 This was a section of road construction with the new road to the right and a bypass road on the left. These bypass roads were of varying condition. 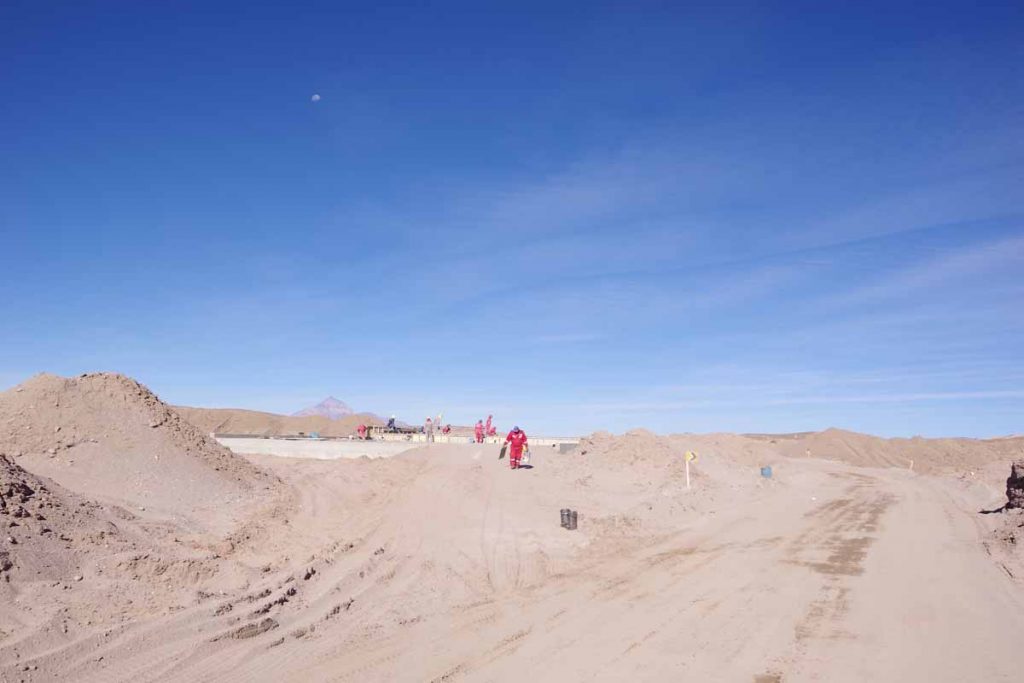 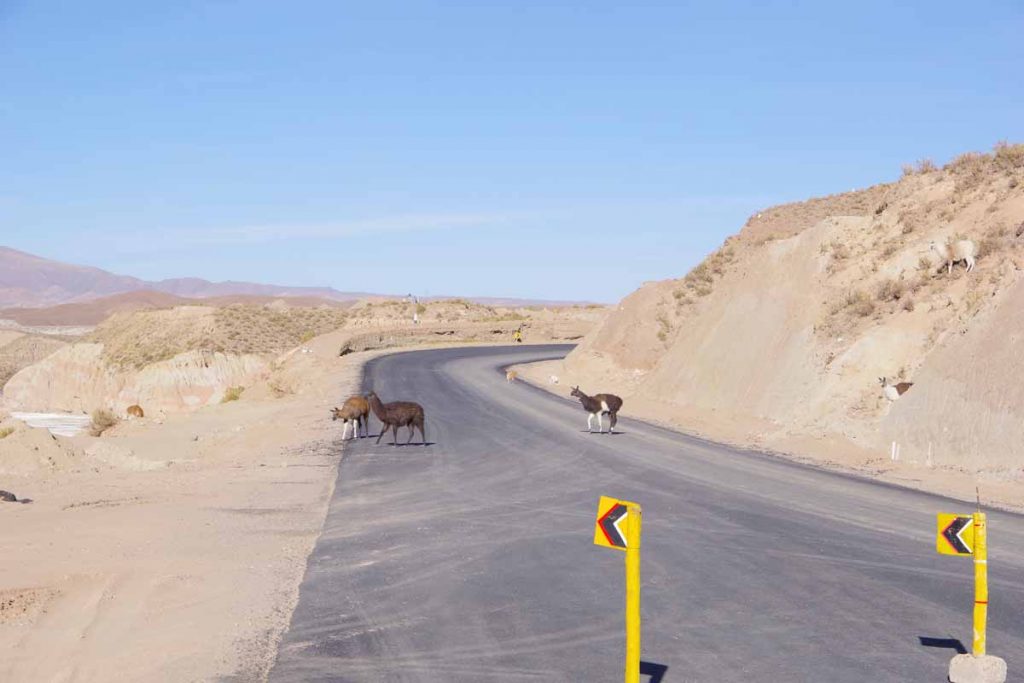 The last 10km to Atocha were actually pavement again. Also several steep hills with one approaching 10%.

Made it to town past 5pm as the sun was already low on the horizon and the town was mostly in the shadows. Found a basic hotel where the room had just enough space for a bed as well as my bicycle. It had been a long 100km day with 60km of gravel, but also nice to find a place inside where the room would be just slightly warmer than camping.

Day Two – Atocha to High Camp
This was a tough day. Only 63km, but more than 1300m of climbing and a moderate amount of gravel roads. 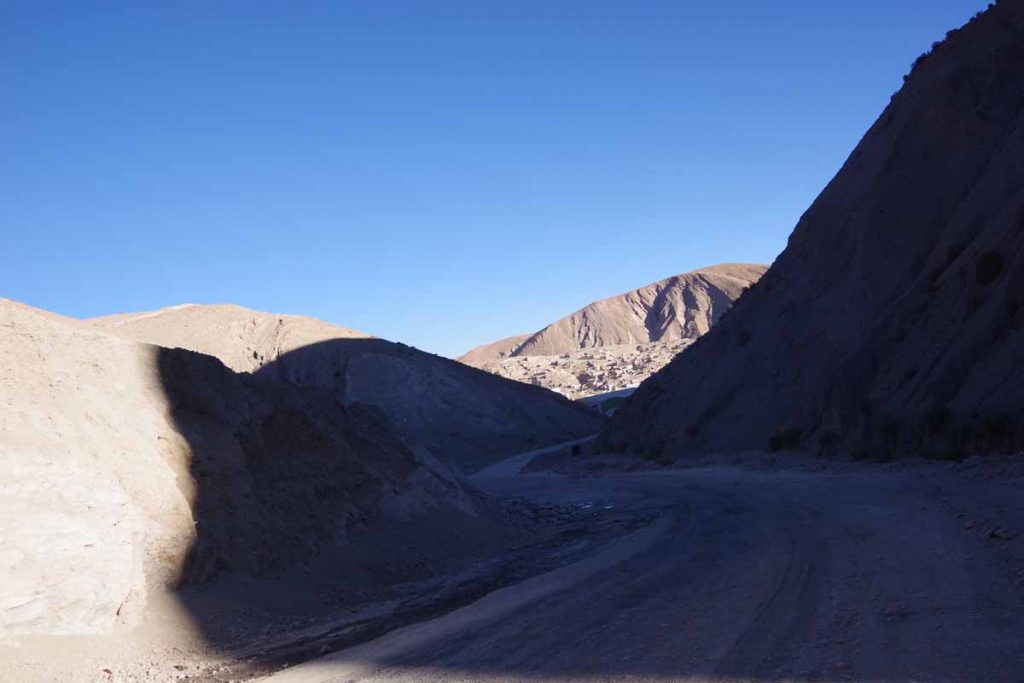 It was cold leaving Atocha. My cycle computer told me -6.5C (20F) as I came up a sharp little ravine leaving town. You can see Atocha in the distance. 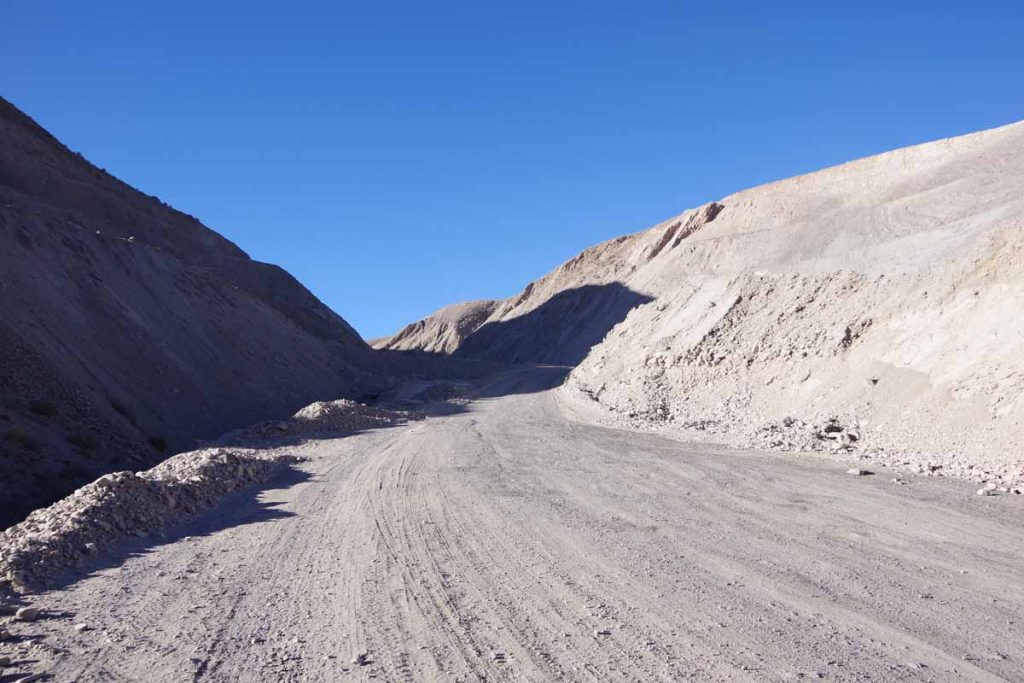 Here was the climb heading up. 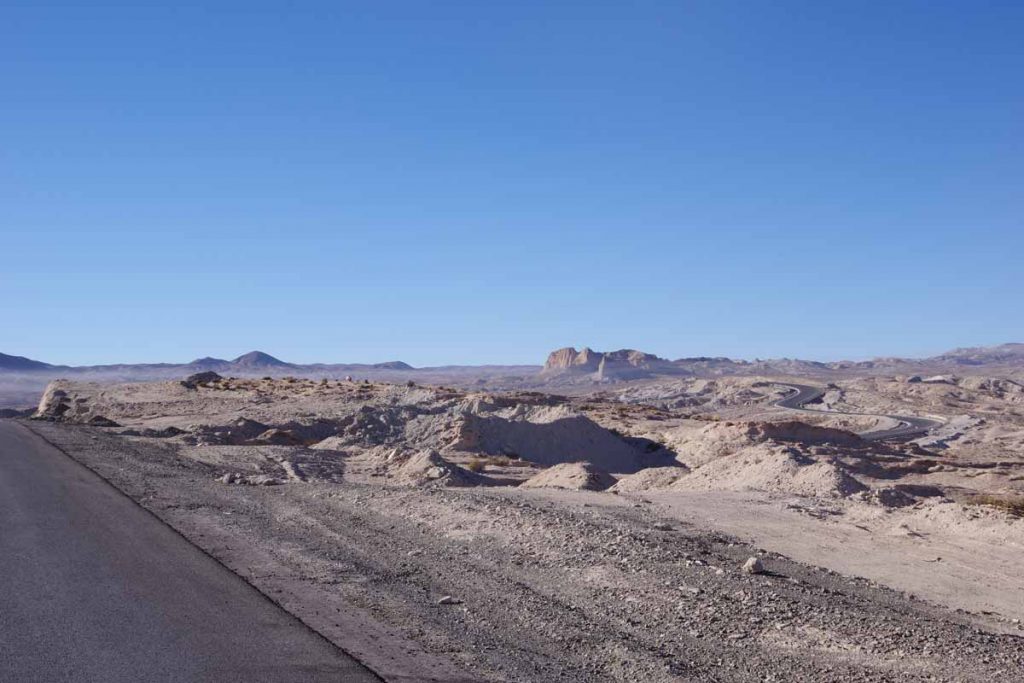 As I got to the top, there was a beautiful wide open landscape. At 3km the road became paved. It was still steep at times. It also became warmer with the sun. 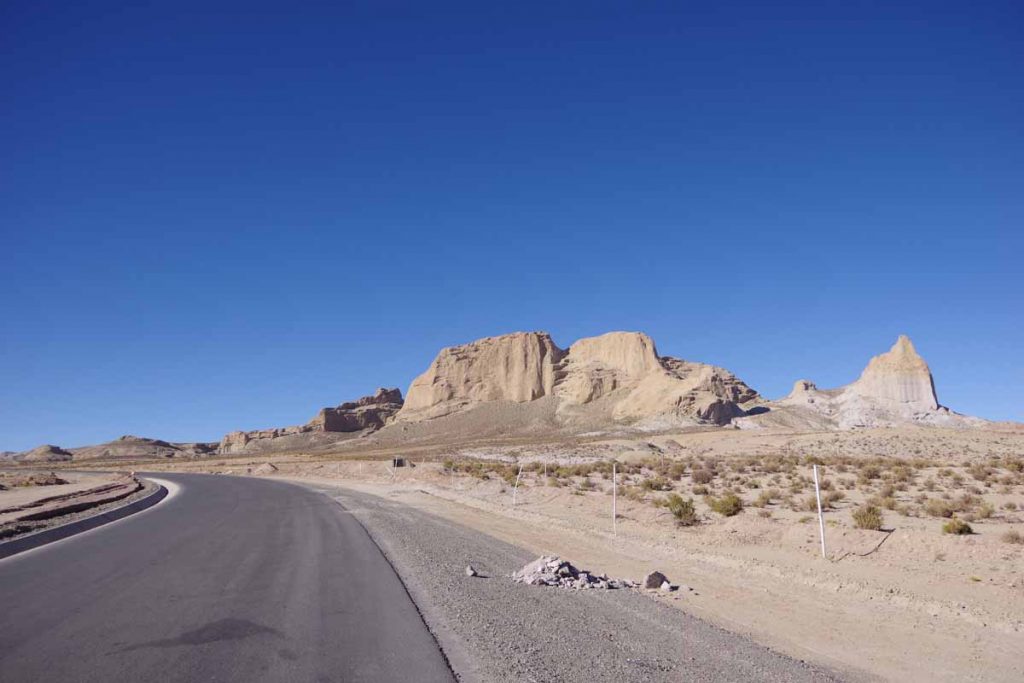 Wonderful landscapes along the way.

I had forgotten to fill my water, so found a small store at 13km and bought some water to top things off. 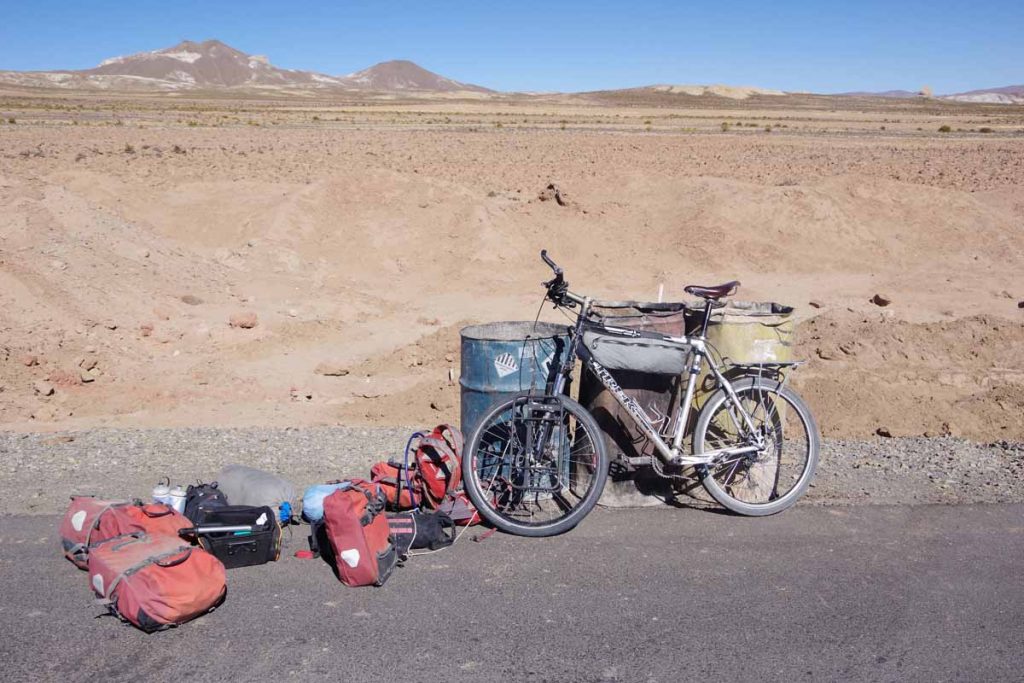 At 13km my front tire was flat. Another small wire. These barrels were handy to lean everything against. Inside the water was still frozen. 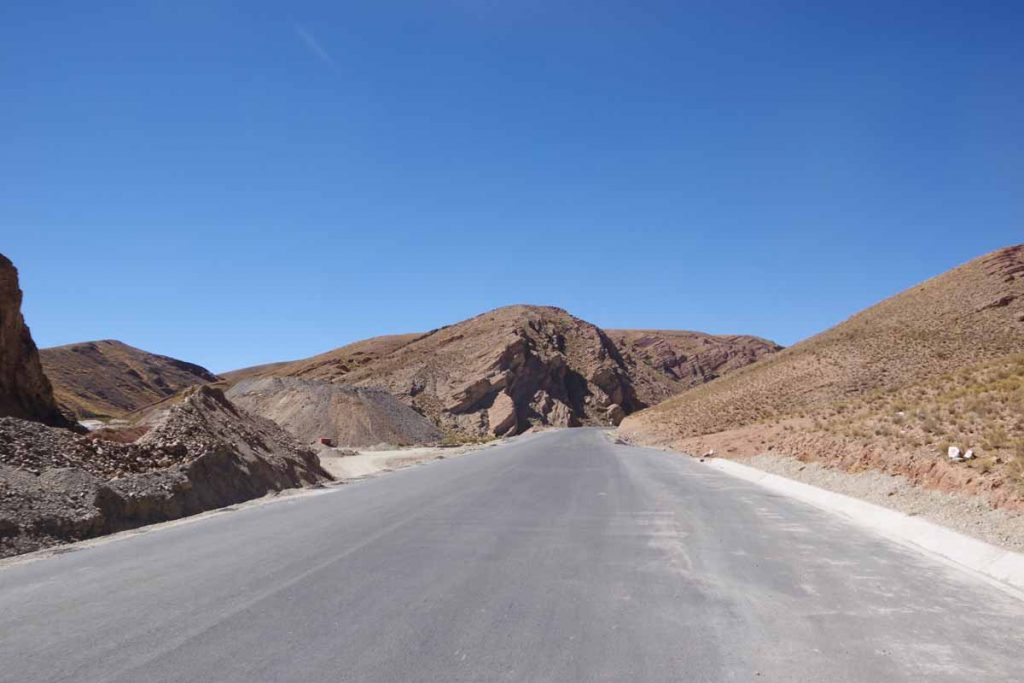 It was a much hillier ride today. 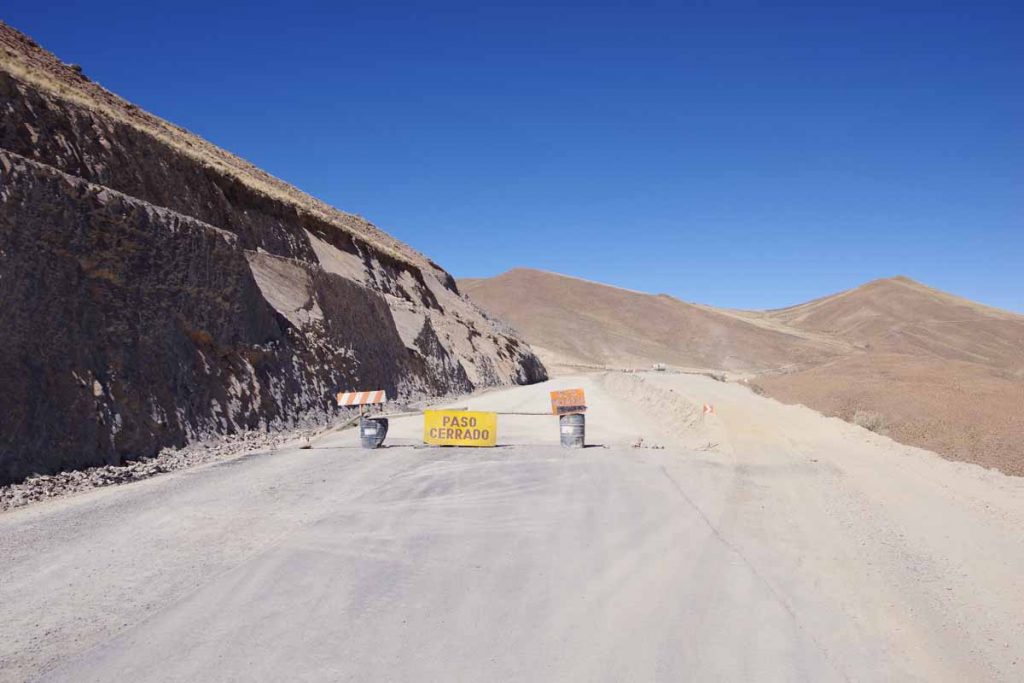 At 38km the pavement stopped. 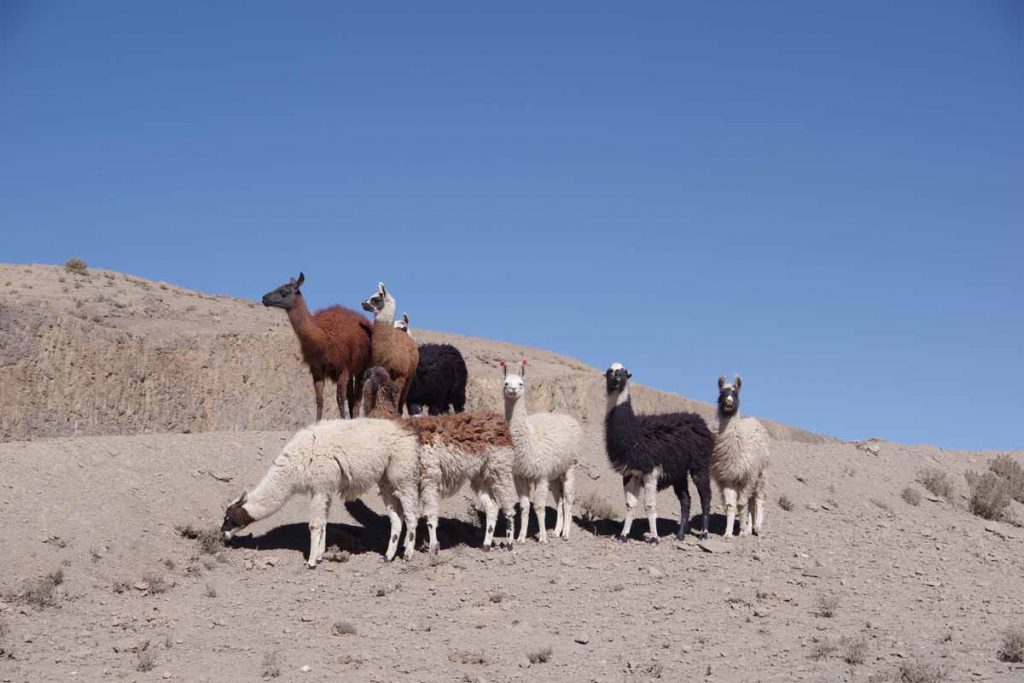 The only photo I took all afternoon was of these llamas.

However, it was a slow grind cycling. There were a few steep gravel hills where I found it easier to walk my bike than ride. I would also occasionally try the new road even when it was closed. Sometimes this worked well but on at least one occasion I found myself lifting my bike up and over a closed up berm. 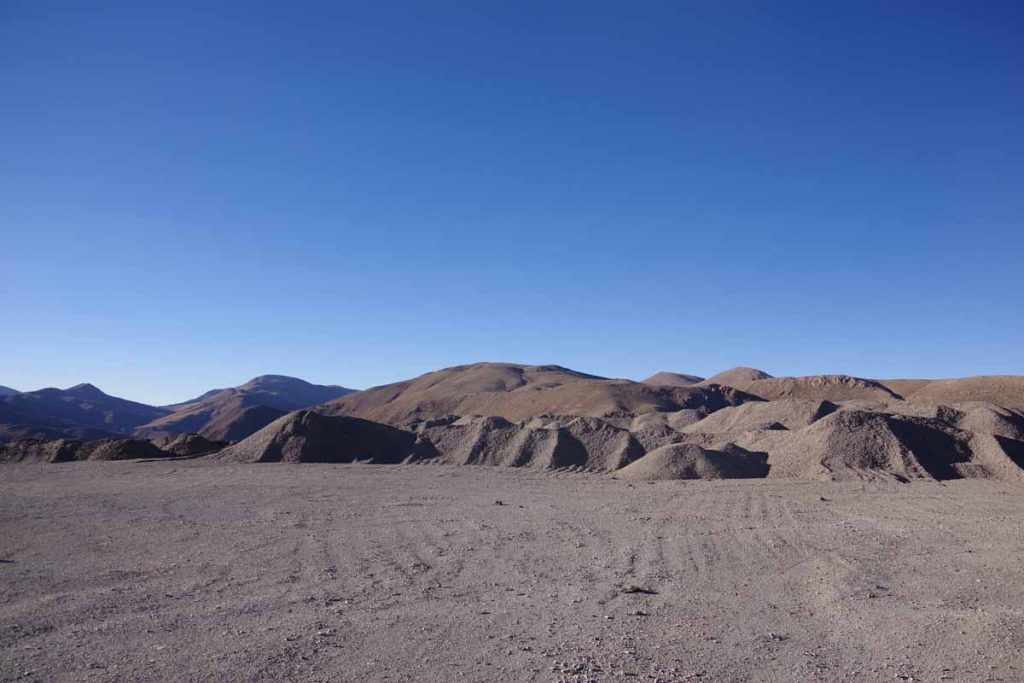 I kept going until 5pm and by then was tired and spent. I saw this gravel dump on the left side and found a space behind it to camp out of view of the traffic. I was at 4000m (13,200ft) and expected a cold evening.

Day Three – High Camp to Tupiza
Suprisingly warm last night. My water bottles didn’t freeze and am fairly certain it stayed above freezing all night. The sun came out and quickly warmed things up. Only drawback was that my rear tire was soft again. I couldn’t find the hole, but did end up swapping in a new tube. 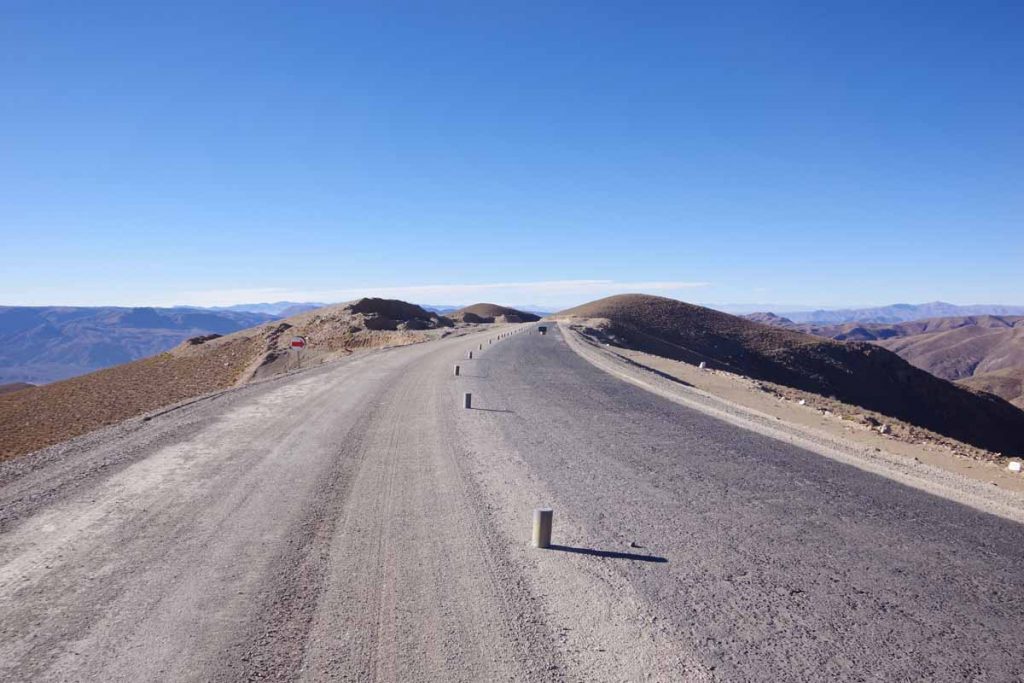 The first 15km were sharply downhill as I descended 800m/2500ft to the valley below. The road was surprisingly good. Sections were graded like this one and even a short stretch was paved. I perhaps could have ridden it the previous day, though didn’t know that. Also from the icy puddles in the valley, suspect my high camp was warmer than in the valley. 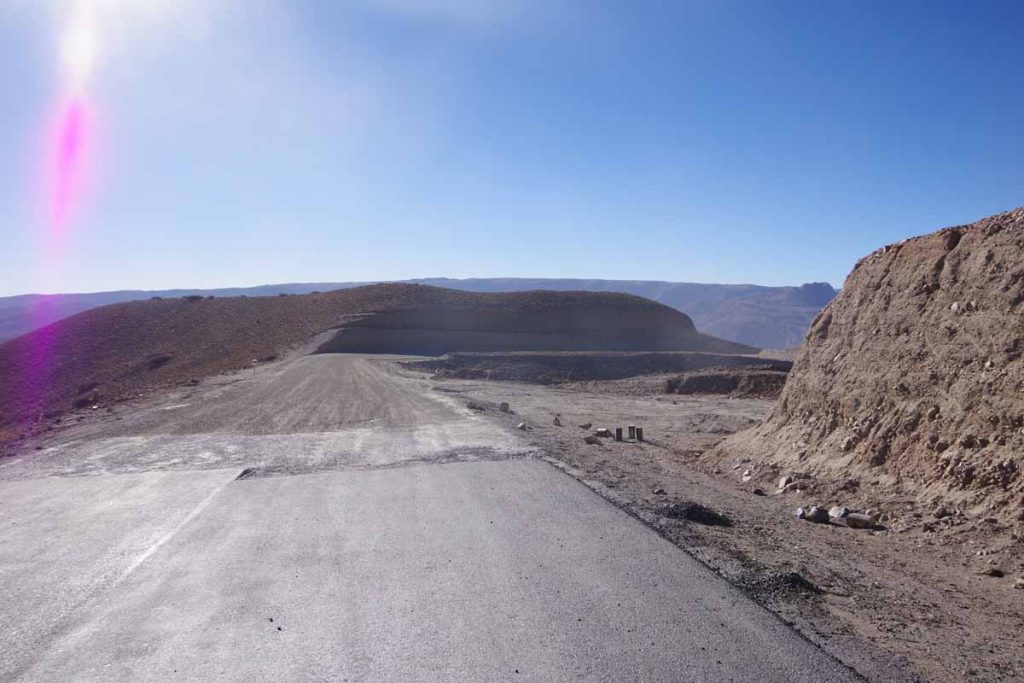 The short section of pavement ended. 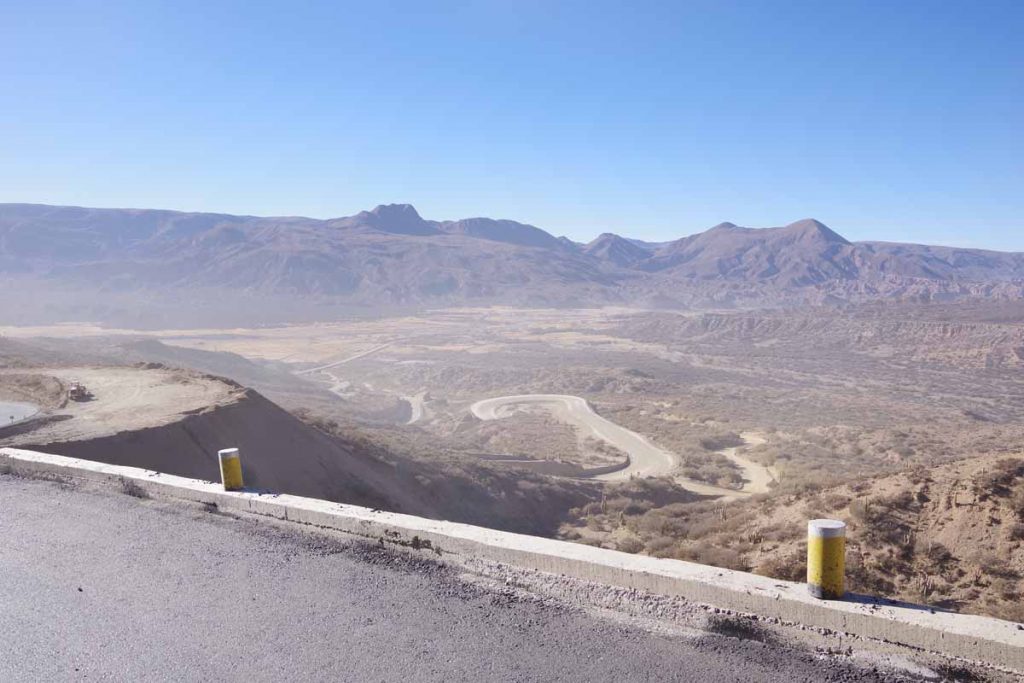 A view of the last little bit in the valley. 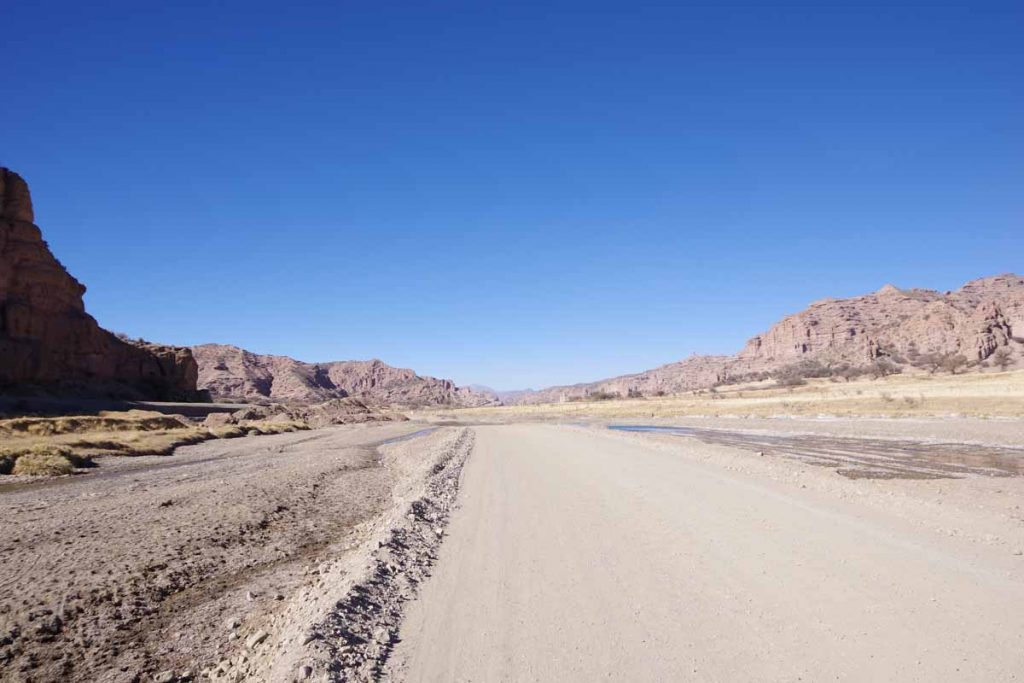 Once I was in the valley, the new road was being constructed off to the side. Instead, the bypass road was graded in the bottom of the canyon itself. Some sections were smooth but a lot of it was a washboard mess. 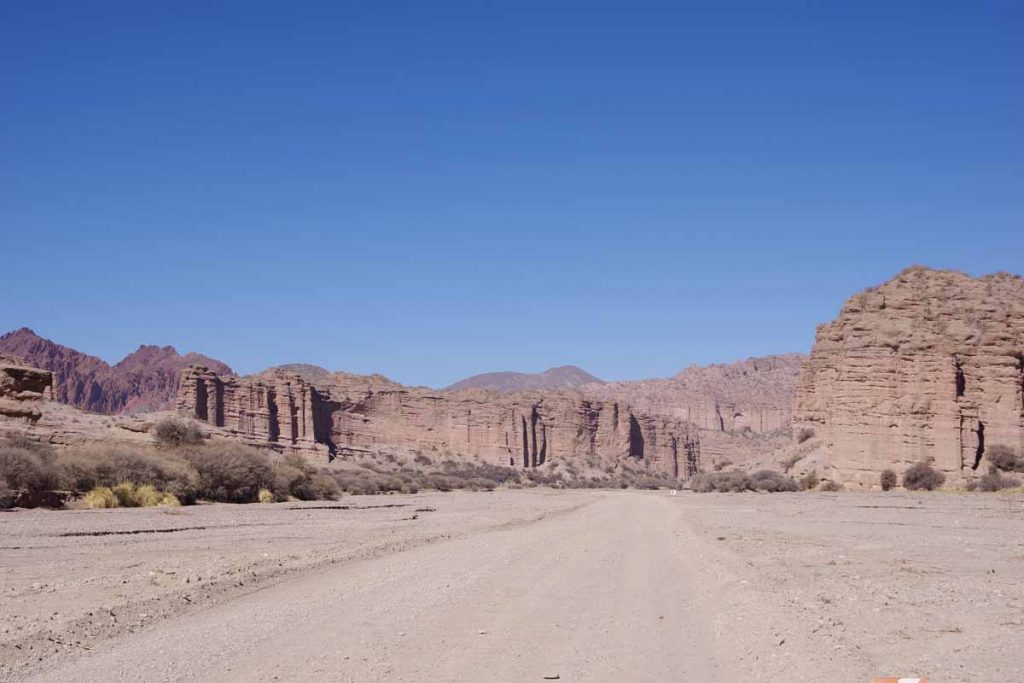 Coming through one of the canyon sections. 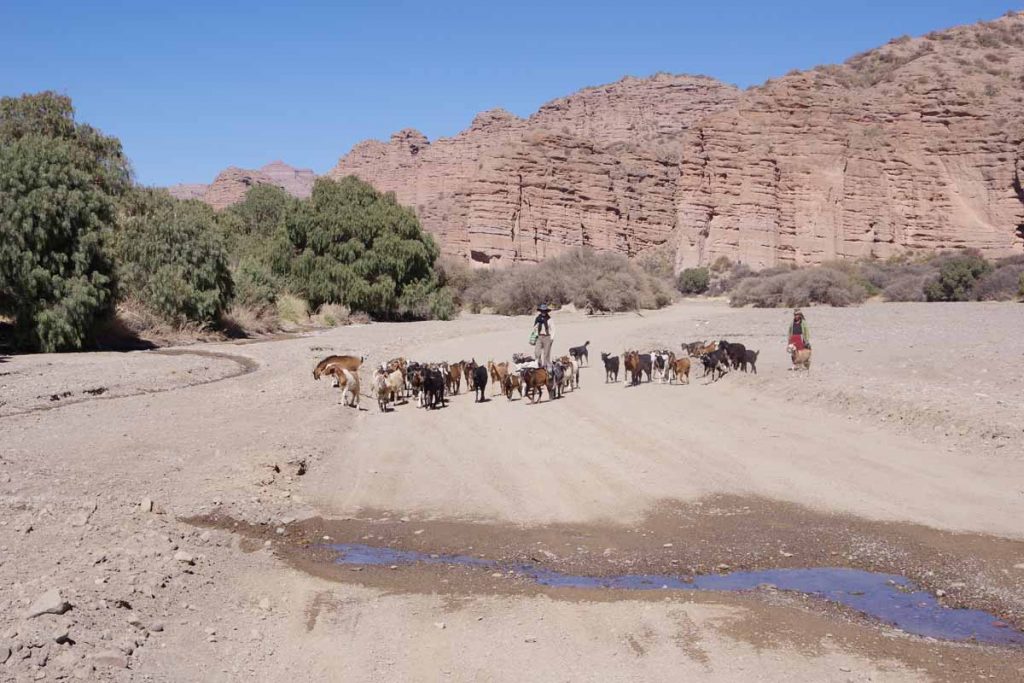 Waiting for traffic to clear. 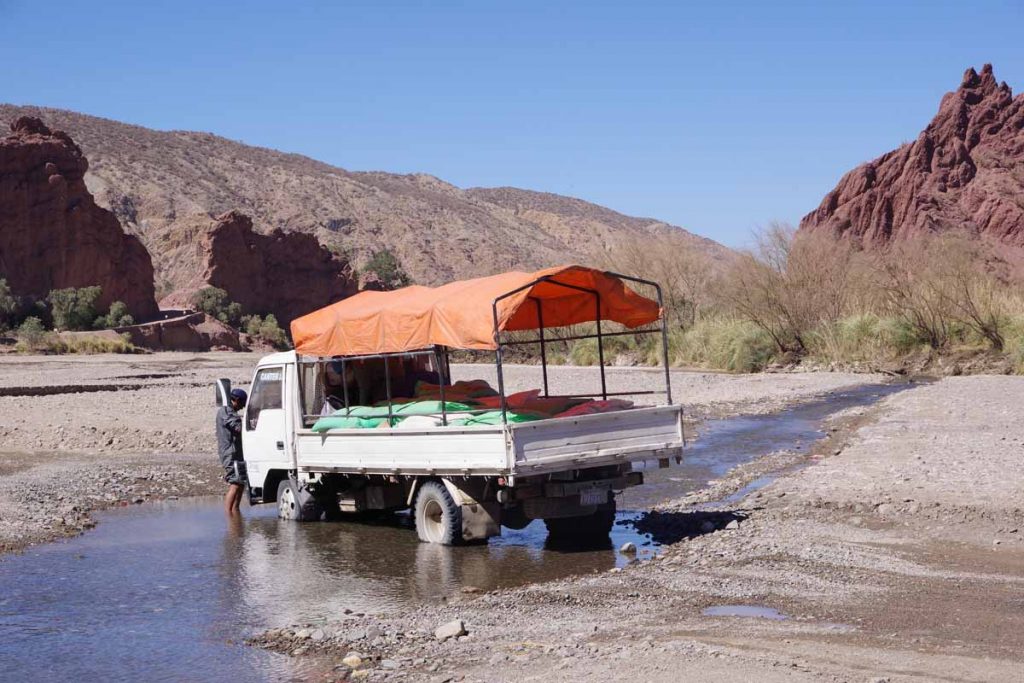 These guys were using the stream to wash their truck. 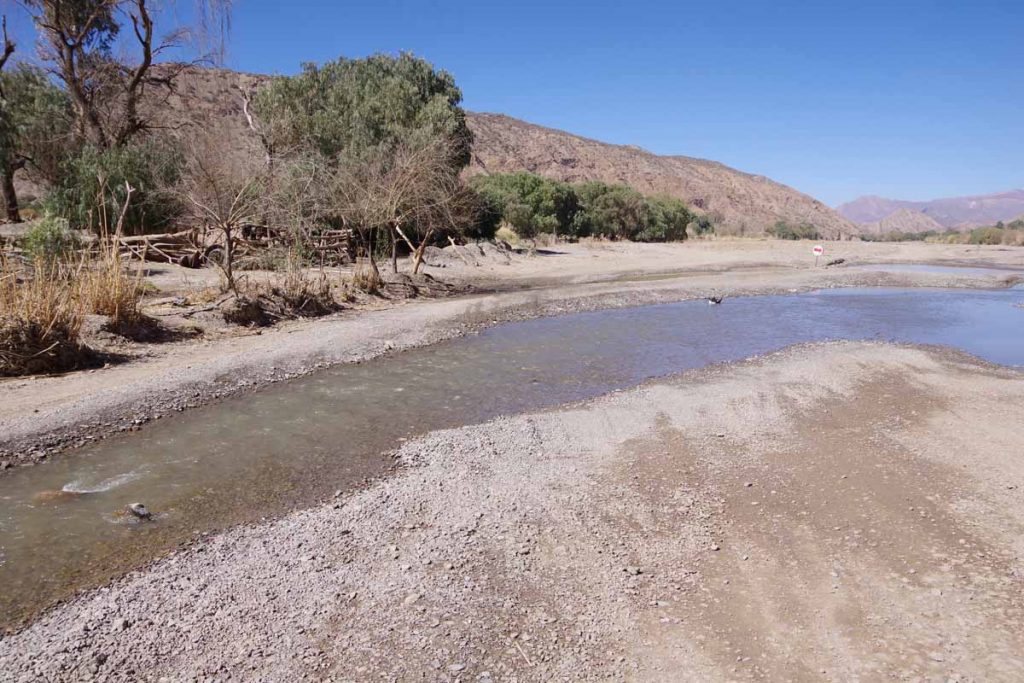 The road itself crossed the stream half a dozen times. As a temporary road, there weren’t bridges. The stream was just wide enough and big enough that I would end up with wet feet, though not so high that my front panniers had troubles. 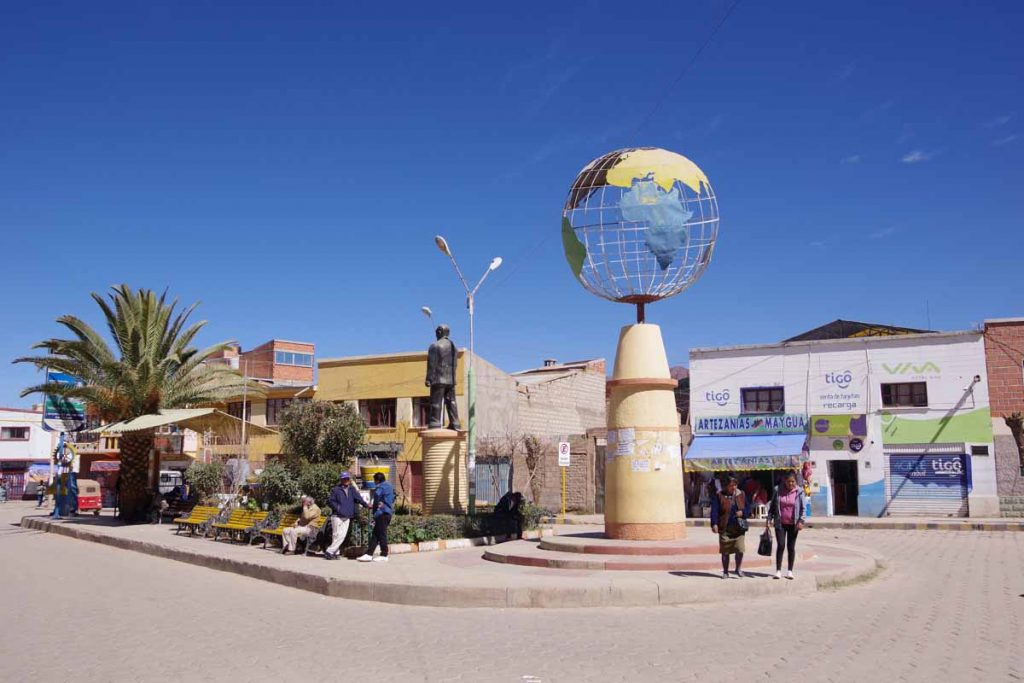 Finally made it to Tupiza. Nice to get into this more touristy town as well as be back to reliable pavement again. My rear tire was soft again, so patched that this afternoon. Not sure why I’m having as many issues with flats, but will see what happens on pavement from here.

Tupiza is at 2850m/9350ft so just a bit warmer. This area was last known place for Bonnie and Clyde and otherwise the area is known for hiking.