A longer day through more areas with wide open views and a bit more climbing than yesterday. 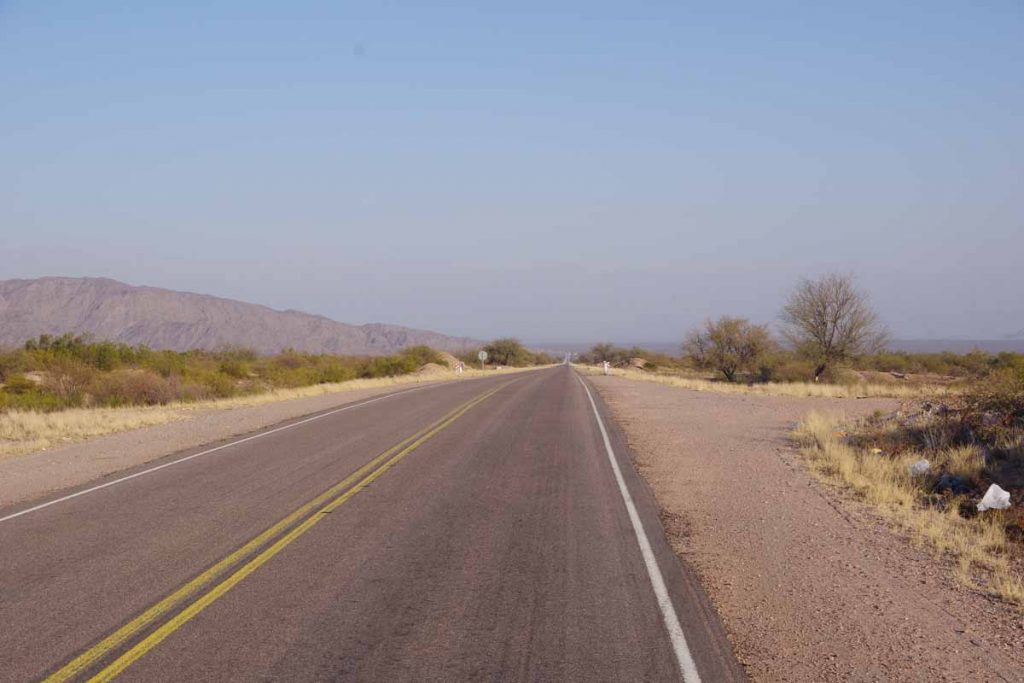 I discovered the downside of my free municipal campground last night. It was Saturday night and around 9:30 pm several motorcycles came, unloaded large boom-box type speakers and started blasting music. I was 200 meters away but it was still very loud. I went over, told them I wanted to sleep and asked to turn the volume down. That lasted about ten minutes before the music went loud again. A lot more people arrived and eventually late at night the party wrapped up and it became quiet again.

I had a second dose of loud music at 6:30 am as well, though I was already awake and so not as big a deal. 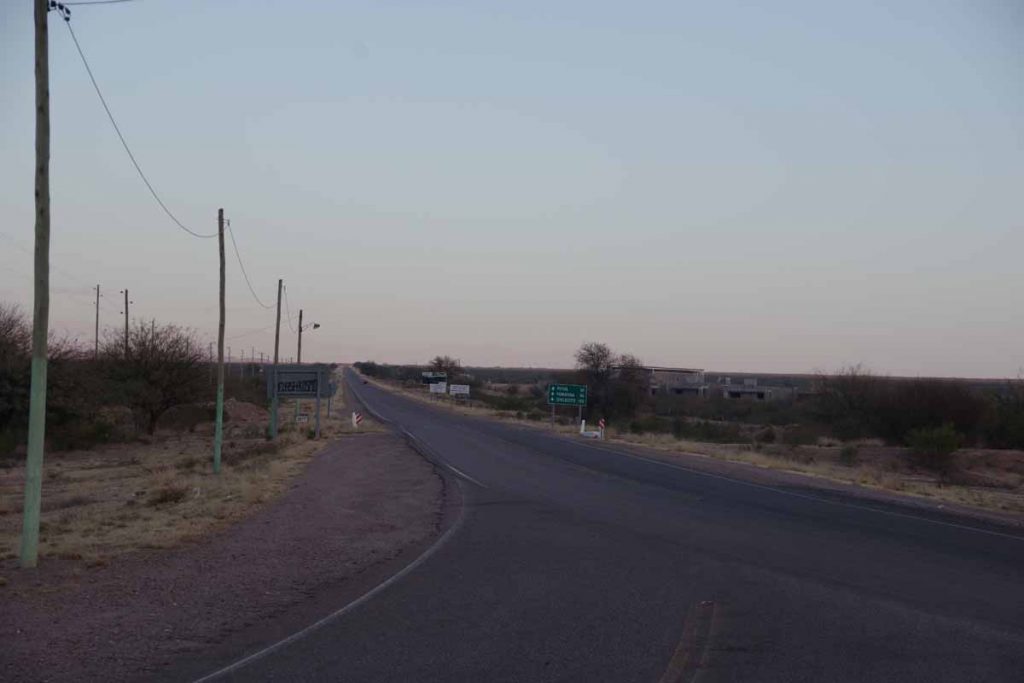 Once I got back to the main road, the route started with 150m of climb, one of three somewhat longer climbs today. The wind was more headwind than a tailwind, though never really strong. 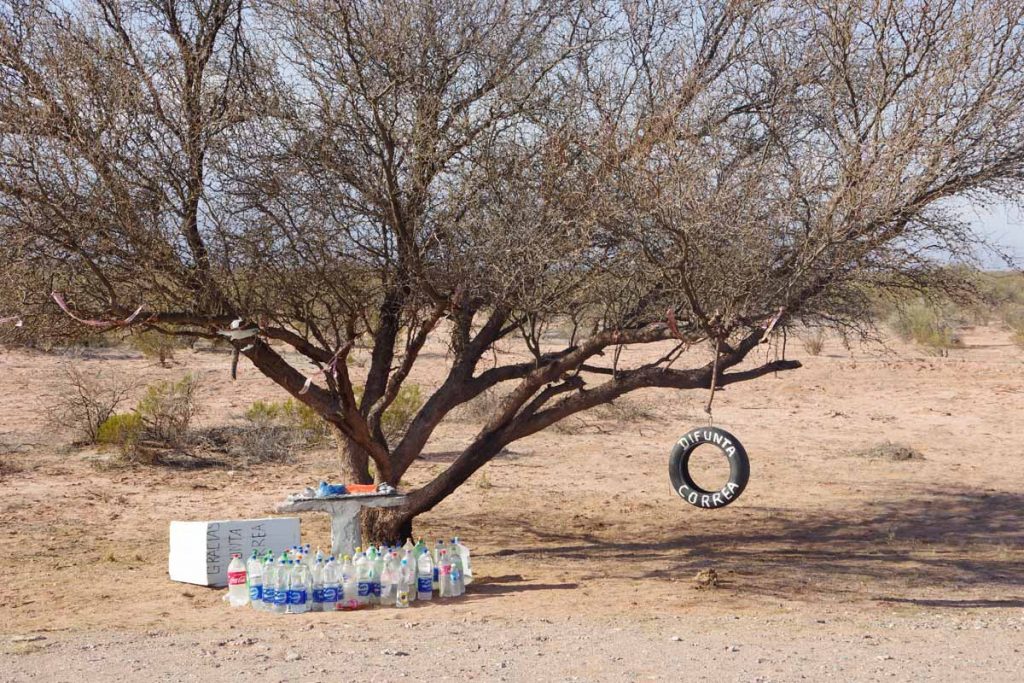 A different type of shrine, this time to Difunta Correa with water to calm the eternal thirst. 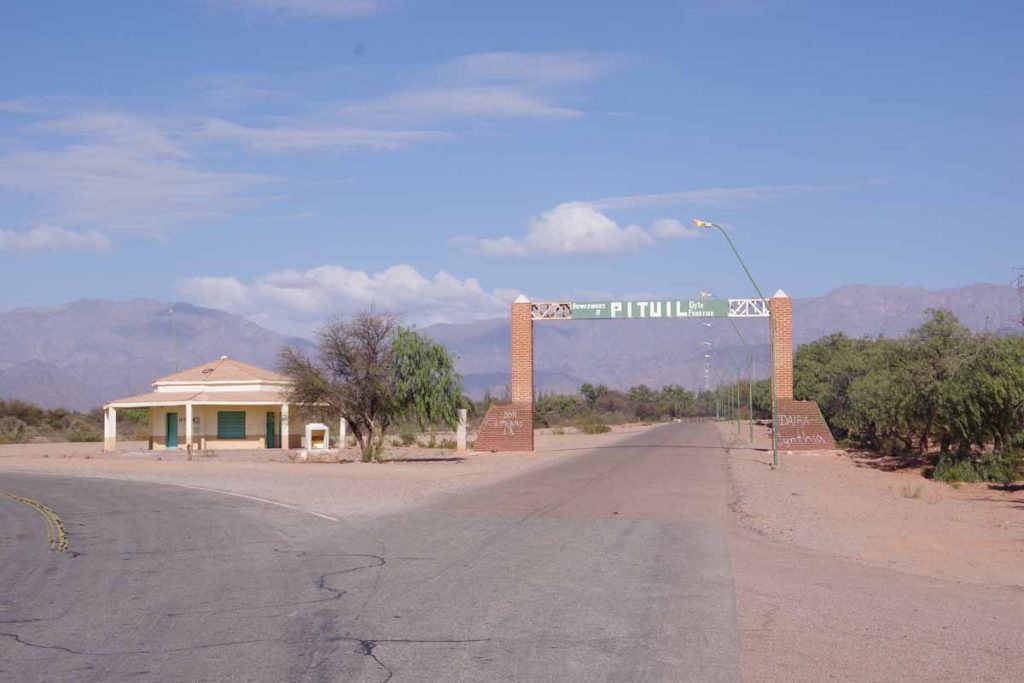 Pituil was the only town today in distance of over 100km. I decided to take the road into town to stop at a small shop. 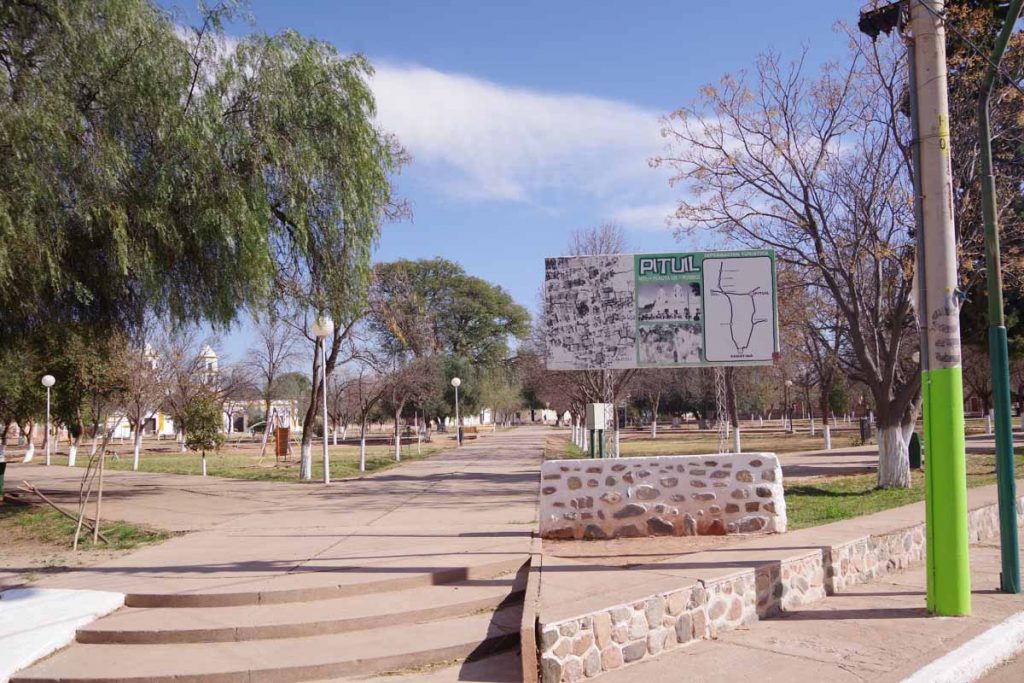 Here was the main square, otherwise a quiet place. 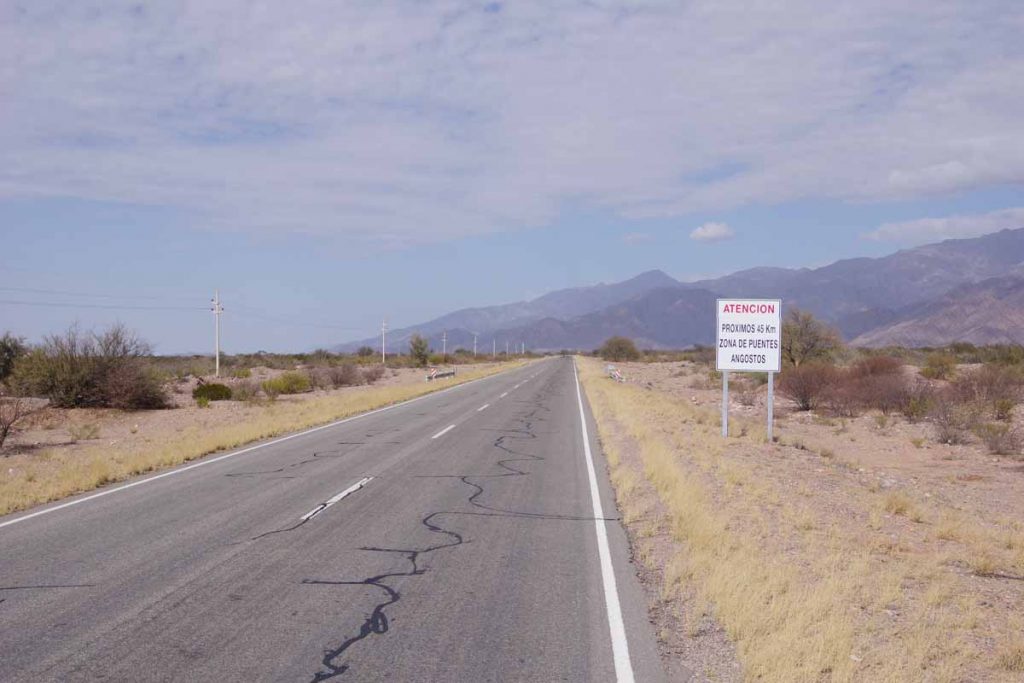 Warnings for narrow bridges, though I didn’t notice many. 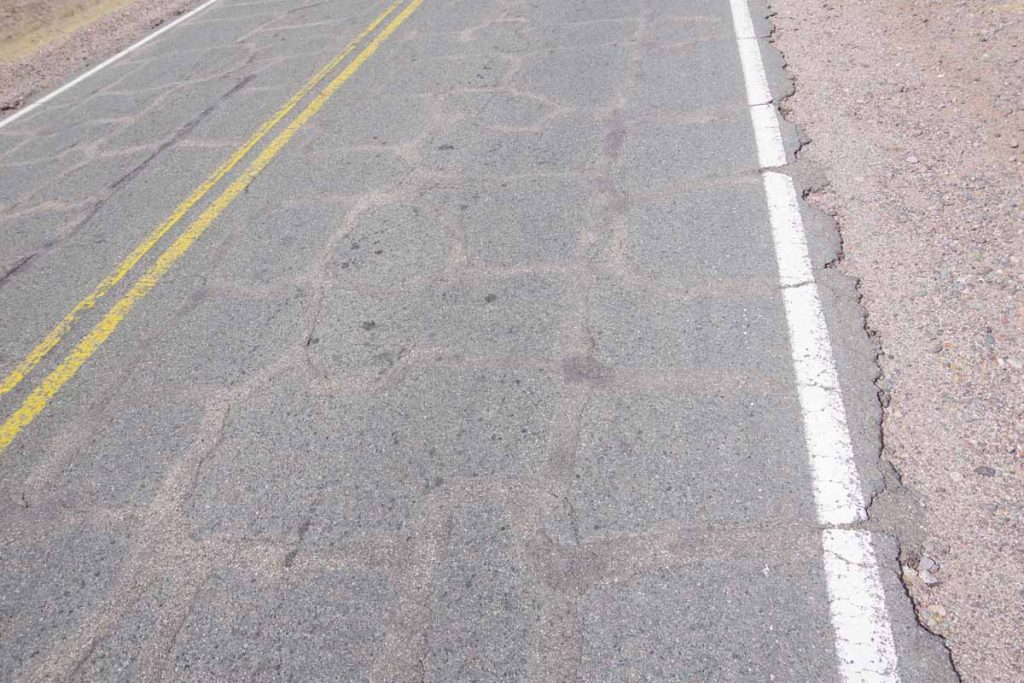 What I did notice was that the road had been carefully patched for many kilometers. Quite a bit of work, though also led to a more bumpy ride. 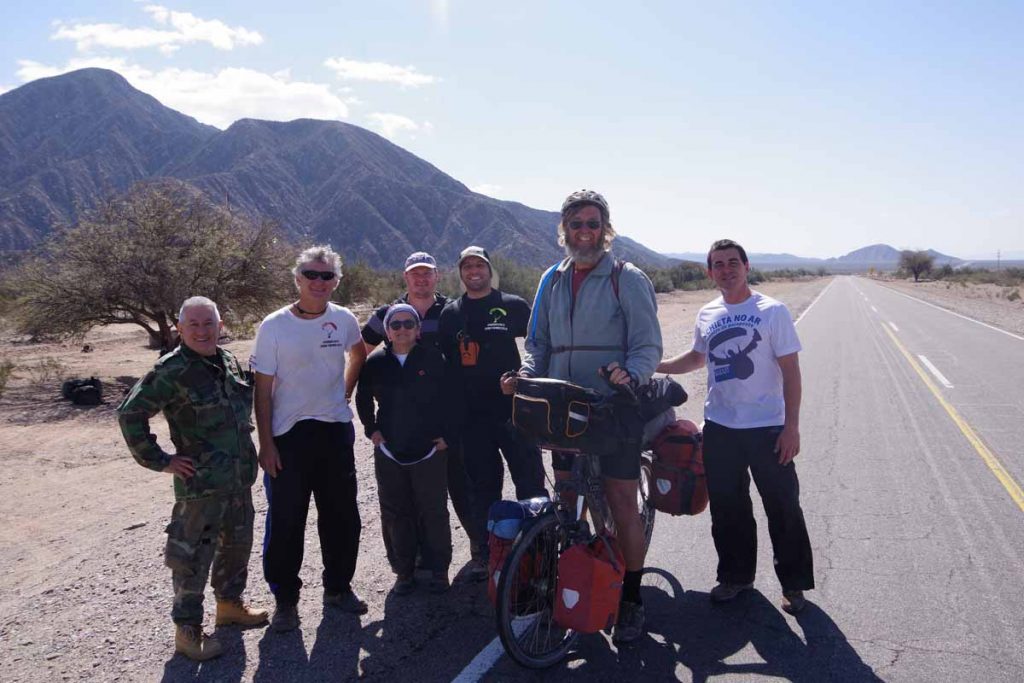 These guys were parasailing. I first passed a guy with what looked like two green backpacks organizing his stuff in middle of nowhere. Next, I passed another guy wrapping up some red nylon in the bush not far from the road. Both had apparently landed not long before and were now organizing things to get rides back.

It wasn’t until I came past the main group as well as a sign with a parachute that I figured out what they were doing. We had a good conversation and they offered water and told me about the road ahead. 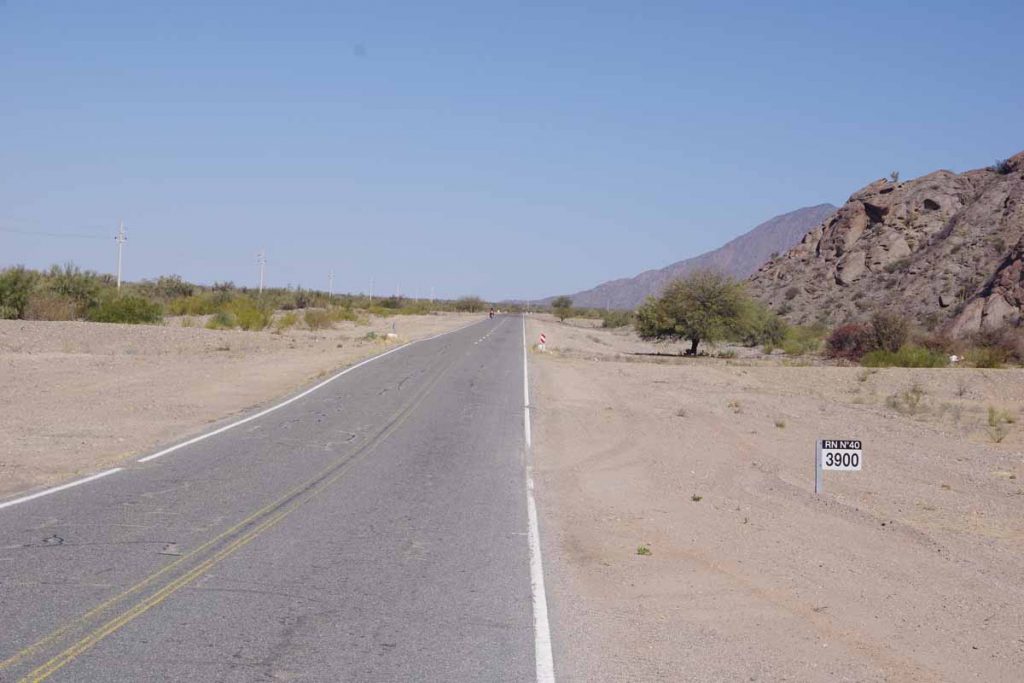 As the 3900 marker indicates, slowly chipping away at the distance on Ruta 40.

From here it was a slow steady climb up two hills and then into larger town of Chilecito. On Sunday late afternoon it seemed even quieter than one might find during siesta. Without much difficulty, found a reasonable hotel and then something to eat not far from the town square.

Otherwise figuring out whether to take a rest day here or shuffle some shorter days – as well as the next section of road which will have a 1200m climb up and over a pass.