Two days riding has brought me across the gap to Junin de Los Andes. The first day was long but not much wind. The second day was climbing over the last hill with a stiff headwind. Overall the winds were much less than the three days before my departure when I took extra rest days in Zapala.

Along the way, I had both acts of kindness and one act of rudeness:
There was a car that passed me very slowly on the first day. They seemed to want to just scan and see what this strange cyclist might be up to. Shortly thereafter they pulled over. I stopped and they were offering both a sandwich and some water. I kindly thanked them for the gestures but had enough food and water to get through so declined.

The second day, a bus coming the other direction flashed its lights. I was climbing a hill into the wind, so most any excuse would do to stop. I waved. As the bus came past, I could see the driver flipping me off. It seemed so strange and mostly funny in my mind.

Fortunately, the acts of kindness have outnumbered the rude behavior and typically when I hear a “honk honk”, I assume it is intended as a friendly salute.
Day one – Zapala to abandoned store 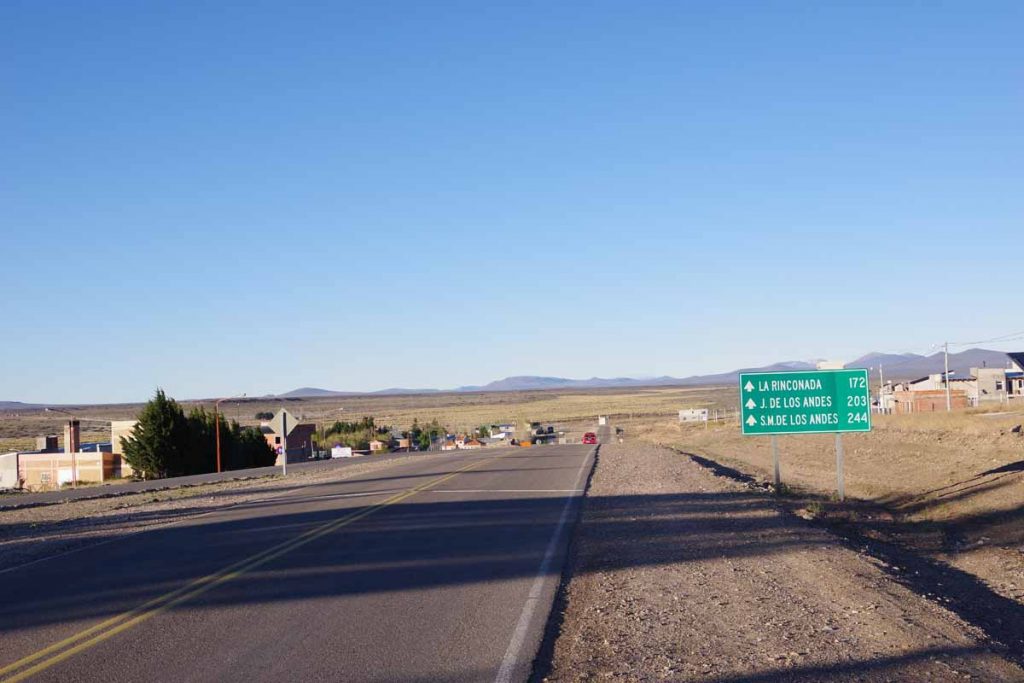 It was breezy overnight and still windy when I set off. Fortunately, this seemed to be the end of the storm and later in the day was much less wind. Almost immediately leaving Zapala the road went through desolate areas. There was a bike path on the left but I figured it would end anytime so didn’t cross to it. It turns out the bike path went for eight kilometers at the airport before stopping. 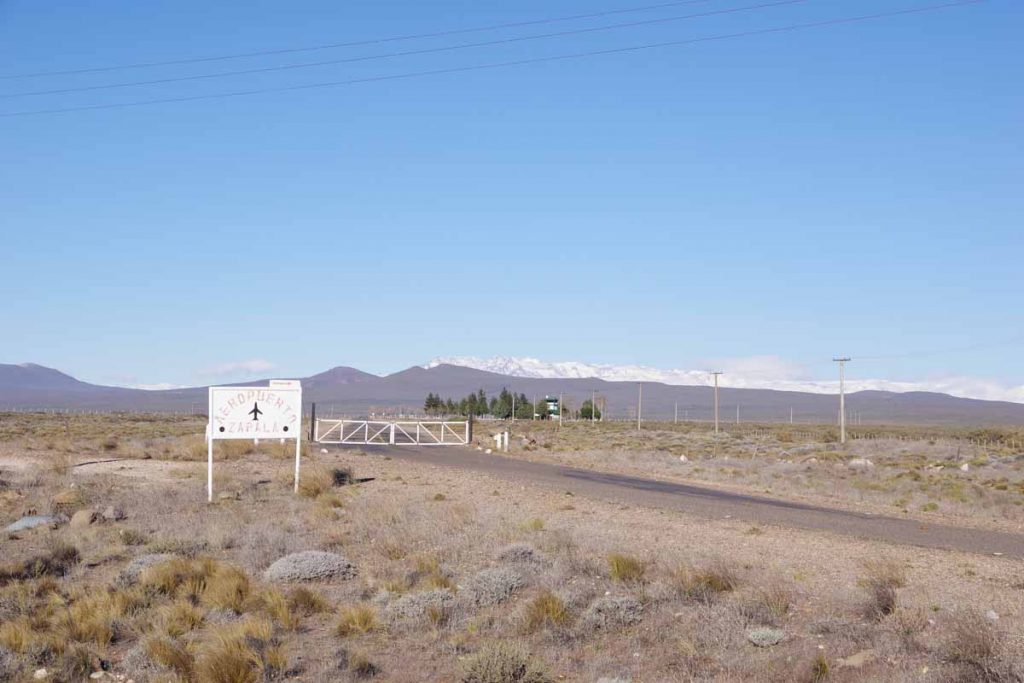 It was not a big airport as can be seen because there is a closed gate to the entrance. 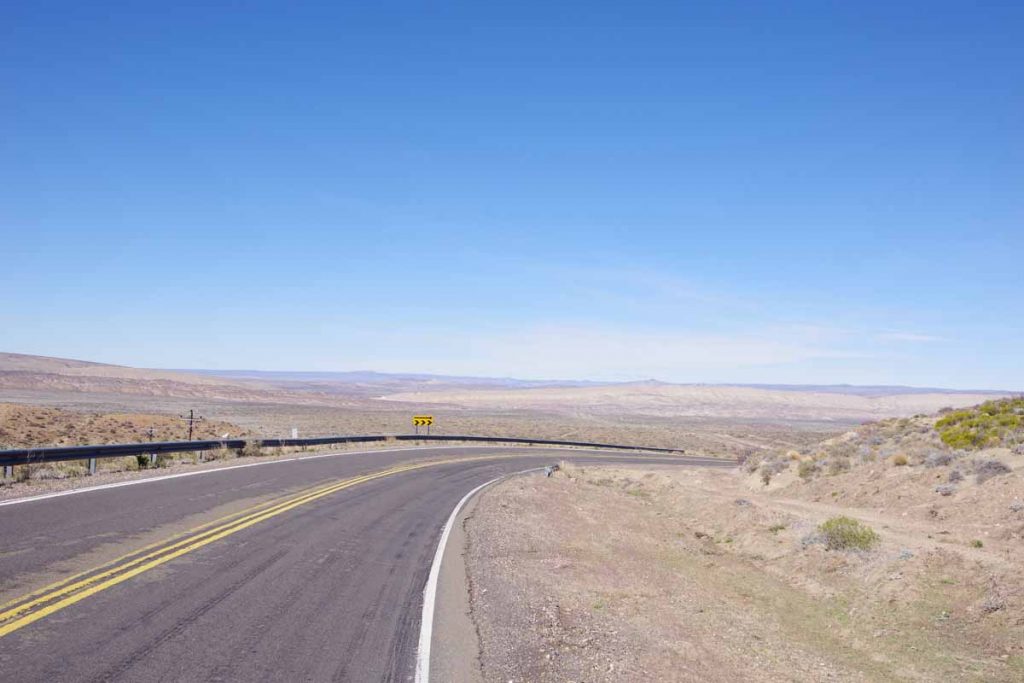 The route went across a steep drainage at 13 kilometers and then climbed up and over several hills. 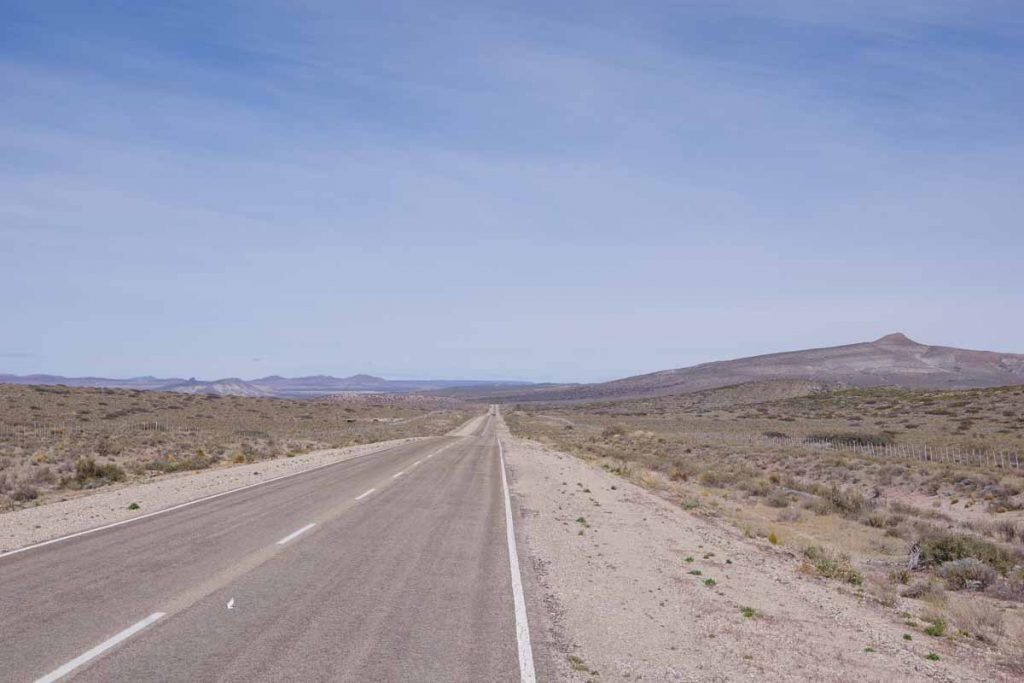 There were fences on both sides of the road and otherwise not very many inviting looking places to camp. 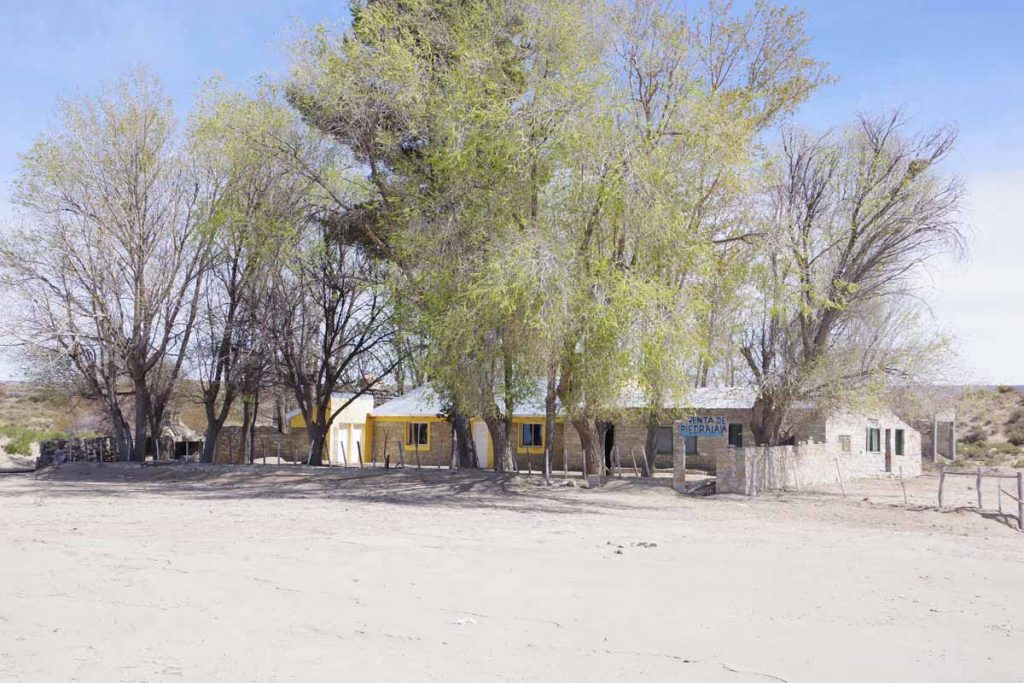 A few houses along the way like this one, though no businesses. 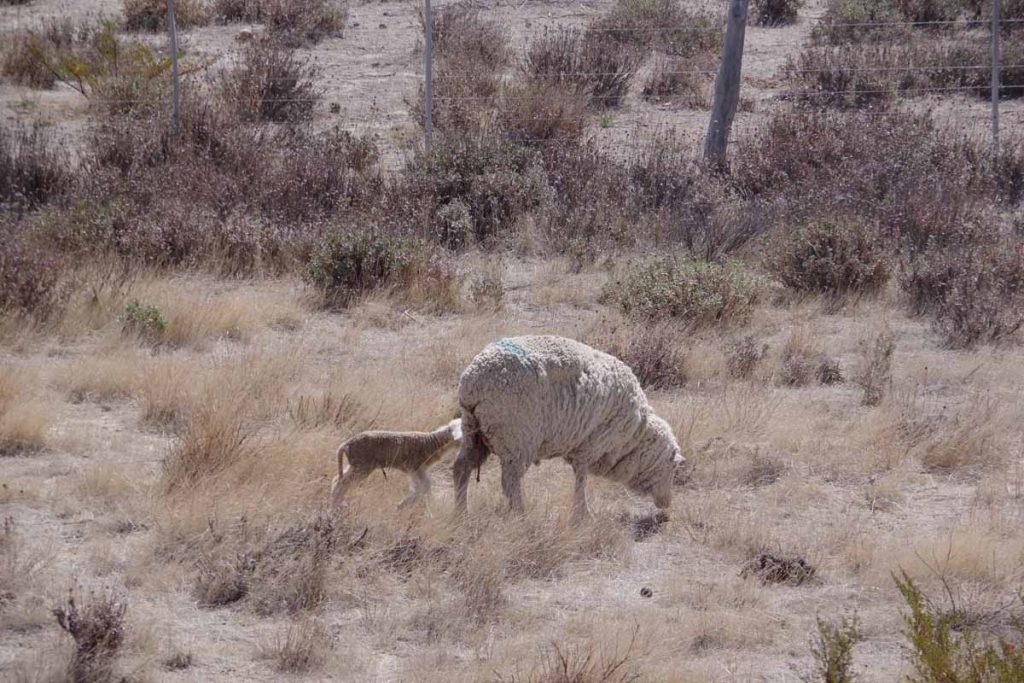 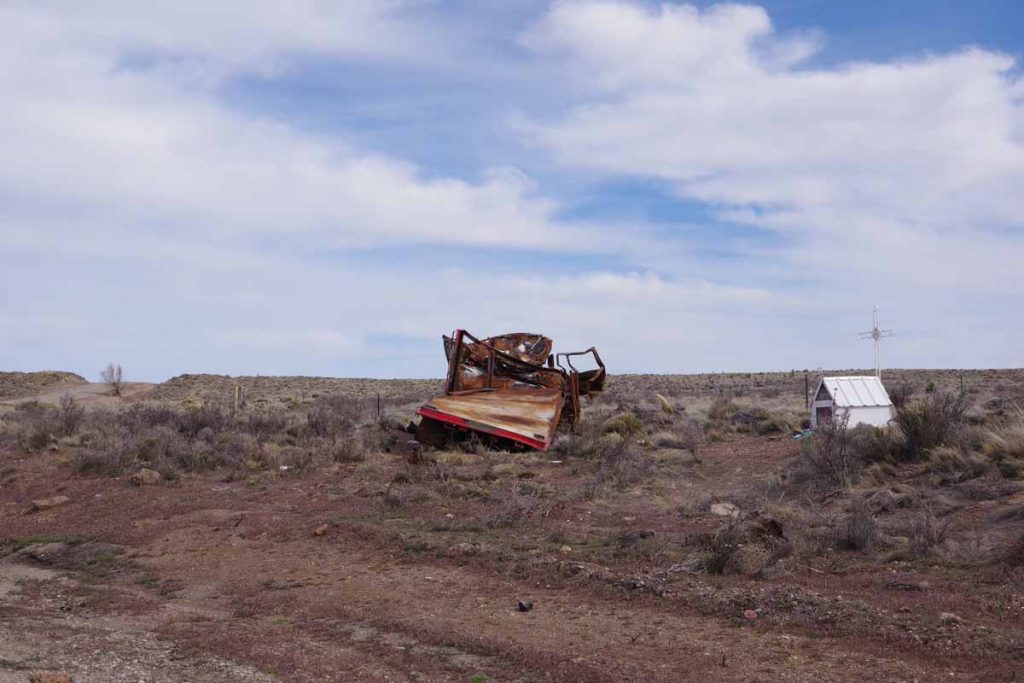 Looks like an unfortunate tale. A mangled truck next to a small shrine.

This was close to top of a hill at 108 kilometers. I had originally thought to go halfway and started looking more seriously for camp sites at 102 kilometers. This climbed up and over a hill at 108 kilometers and then more descent on rougher roads. A combination of not very inviting areas and slightly easier riding downhill meant I got to 128 kilometers before finding a spot at an abandoned store. This was near an intersection of Ruta 24 and Ruta 40 and there was a suprising amount of people stopping through earlier.

One group stopped and eventually picked up a passenger from a bus that also stopped.

Several police trucks came and initially parked along the road. They could see me setting up my tent and came over. They asked for my documents and I showed them the passport. I got the sense they were curious more than anything else and they took a while to go through the stamps and visas inside. Otherwise listened to a podcast and went to sleep.

Day Two – Abandoned store
It was cold overnight. My sleeping bag is rated to -8C/17F and I initially wondered if it wasn’t working as well. However, once I started my bike GPS and saw it was -6C/22F I realized the sleeping bag was fine, it was just cold. Fortunately not much wind. 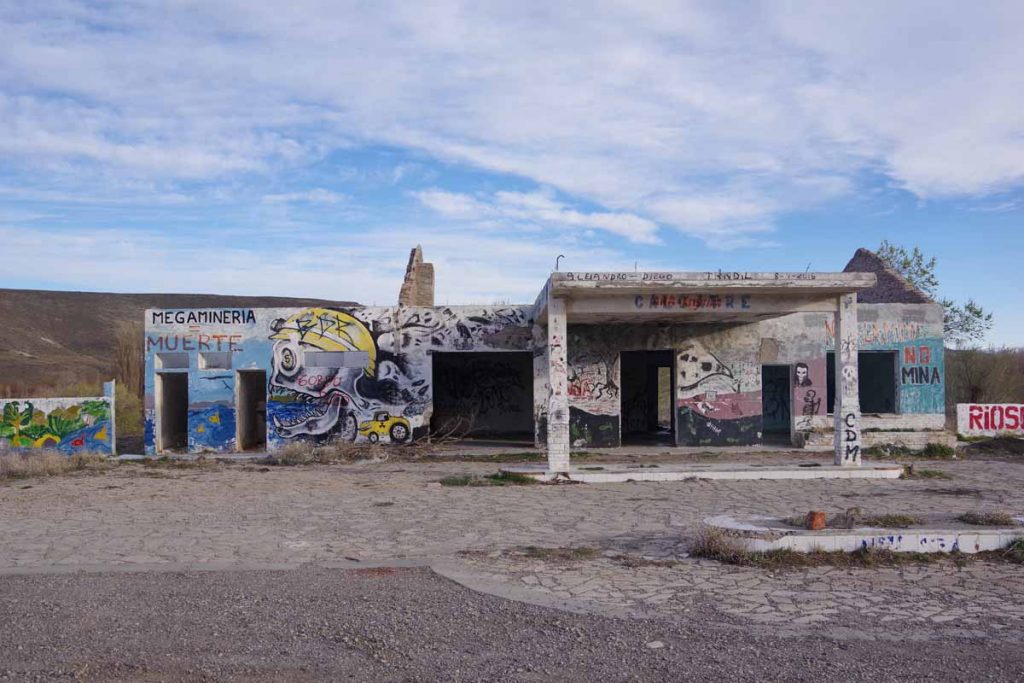 Here is a photo of the abandoned store I had camped beside.

The route went level for a few kilometers before climbing the first of two larger hills for the day. 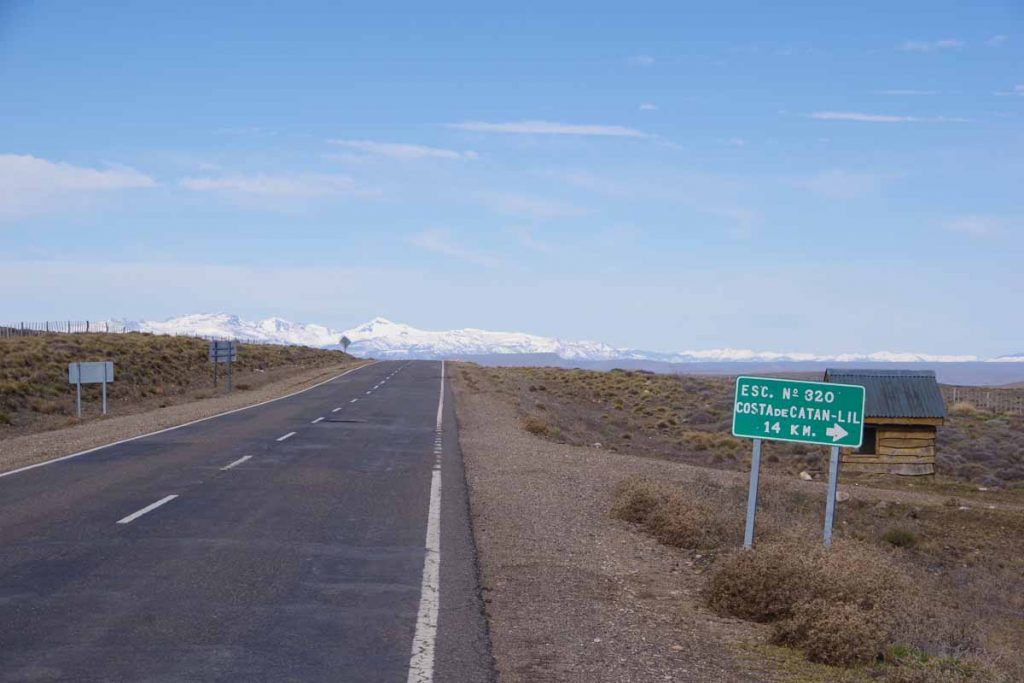 A sign to a school 14 kilometers away. Otherwise, very desolate area. I find it interesting how often there are signs to schools in middle of nowhere. These are not likely to be big, but still have signs. 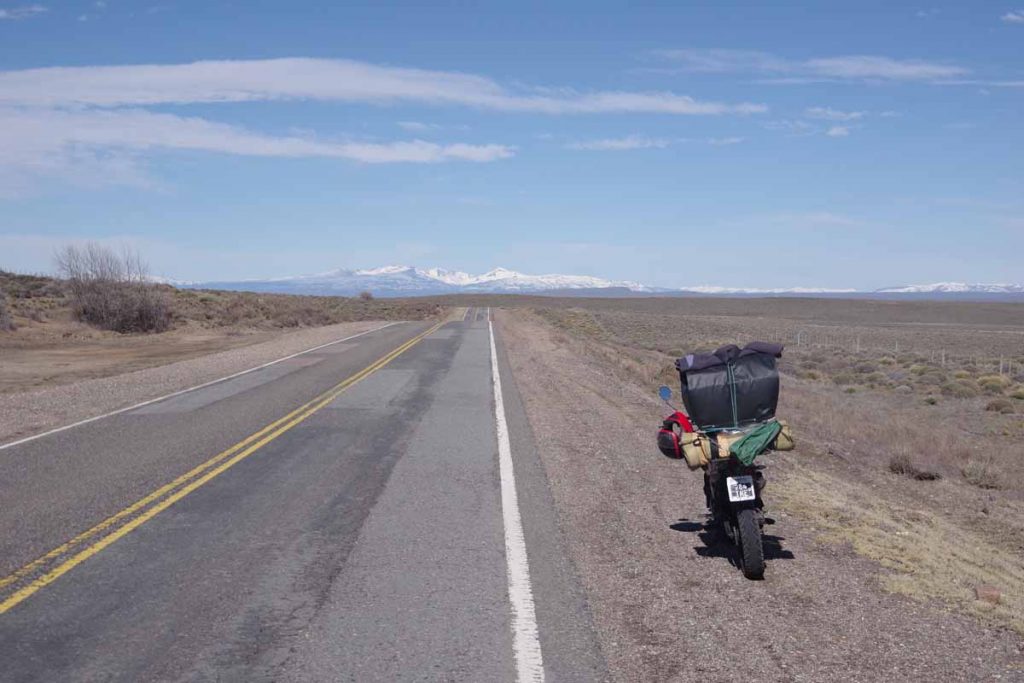 I stopped to get a photo of this touring motorcycle that was stopped. The driver was nearby. He gave me a tale of being broken down. I didn’t quite get all the story in his quick Spanish, but some 20 kilometers later when he came past, the problem had been solved and he was on his way again. 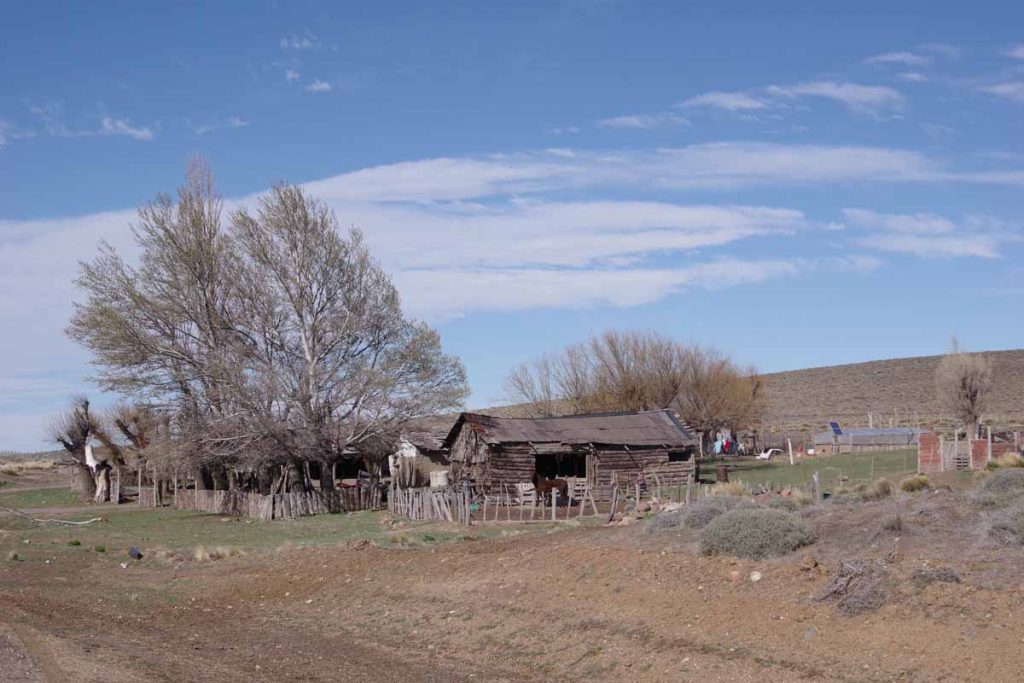 One of the houses along the way. 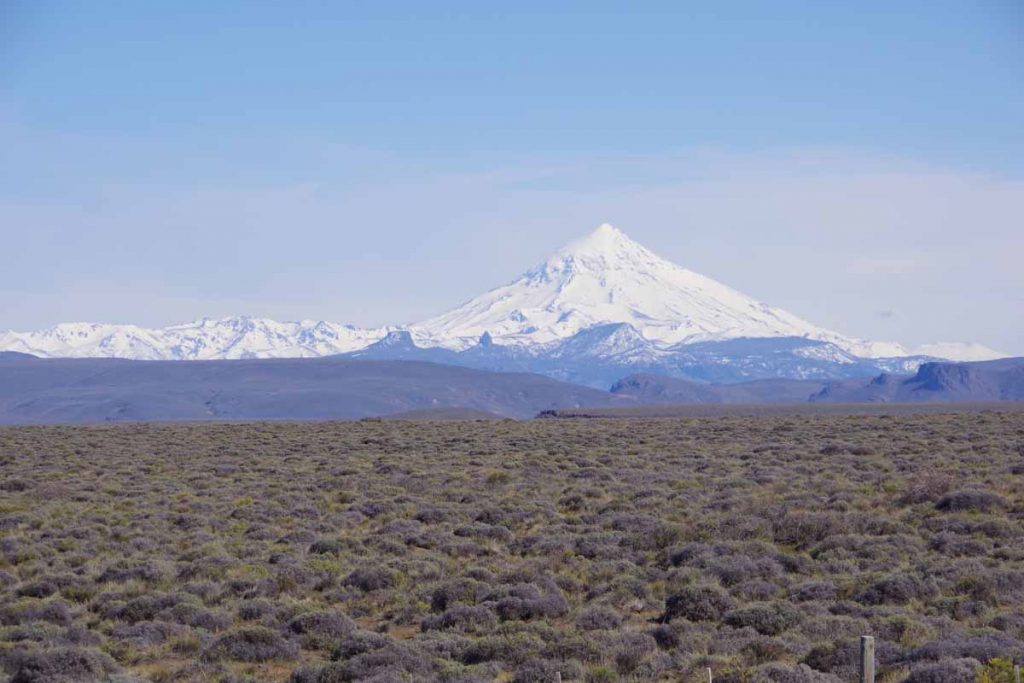 Near the top, I had great views of snowcapped peaks including this one. 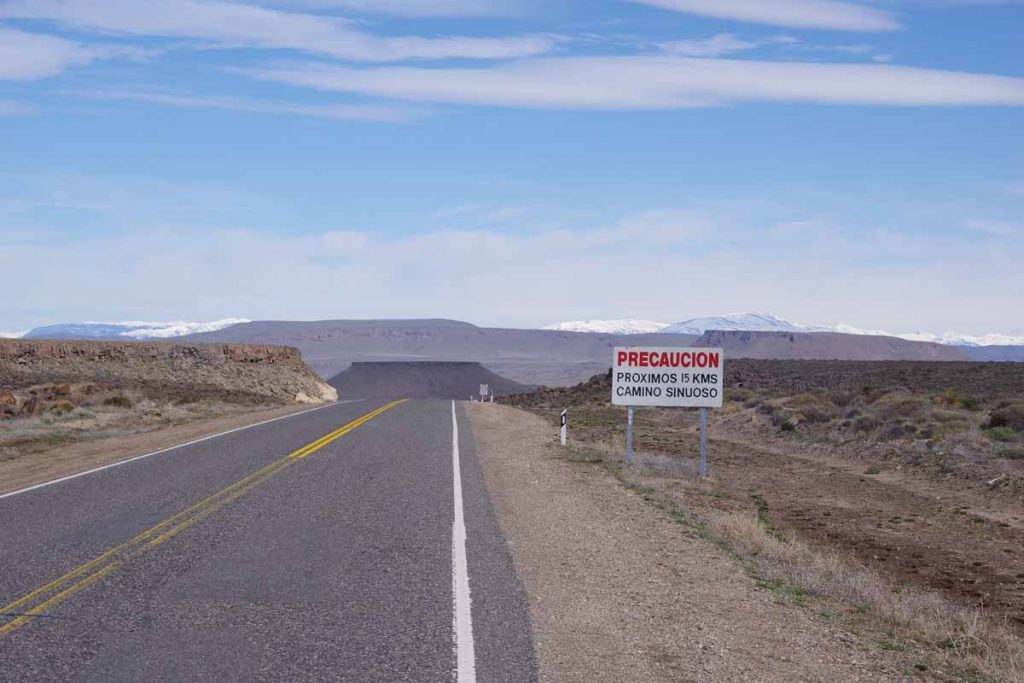 The road was marked for 15 kilometers of winding descent. It was still a reasonable descent down the a larger river. 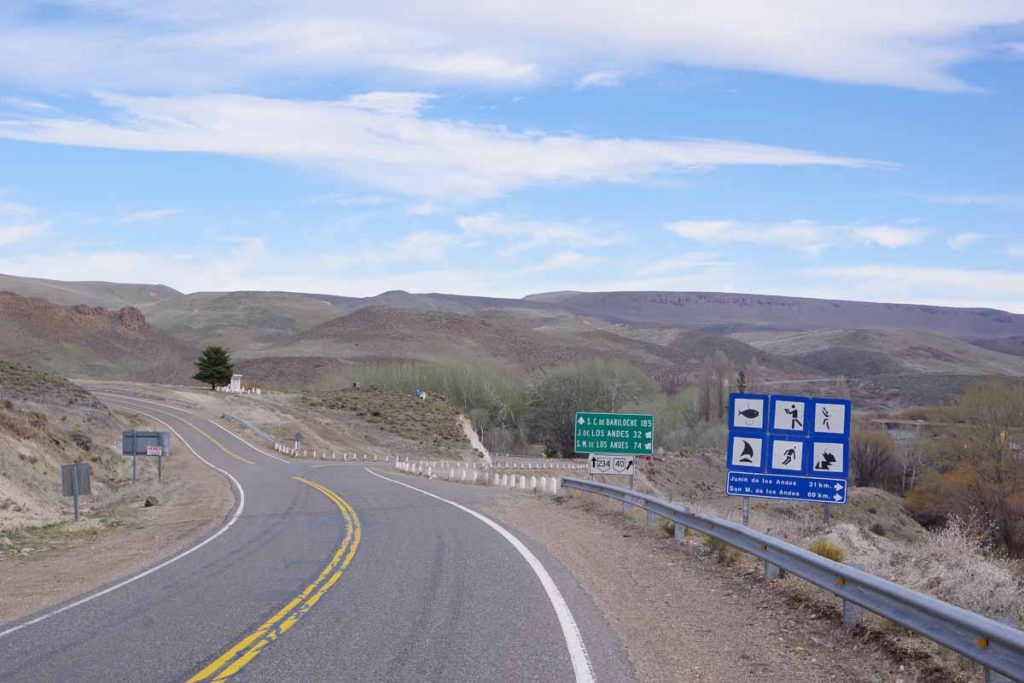 The road split here with the road to left taking a more direct route to Bariloche. The road to right that I took headed towards a more touristy area including Junin de Los Andes. This was also start of a 20 kilometer long hill. The hill wasn’t particularly steep, but it became tougher when the wind picked up and came down the canyon. I went very slowly and took many stops. 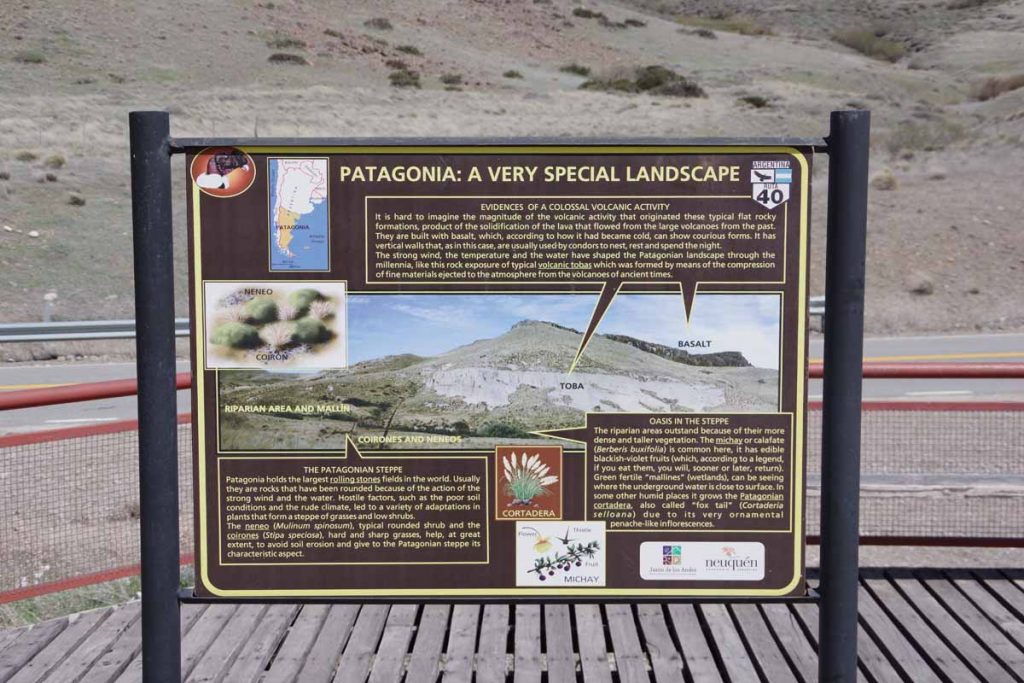 There was a viewpoint here with descriptions of condors as well as the local geology. 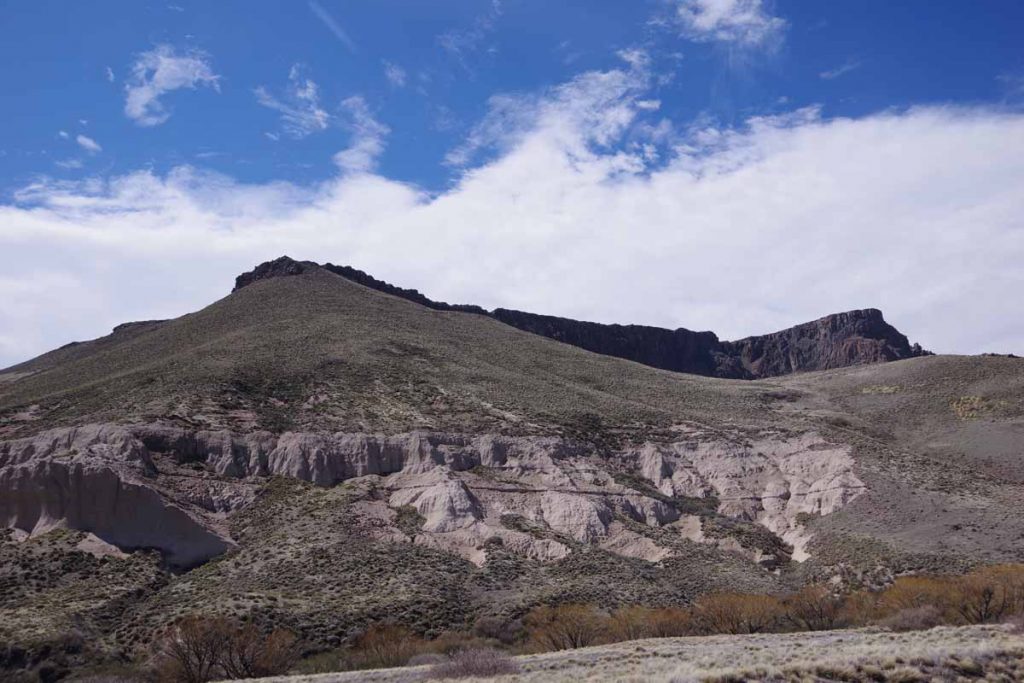 Here was the actual mountain from the condor sign. 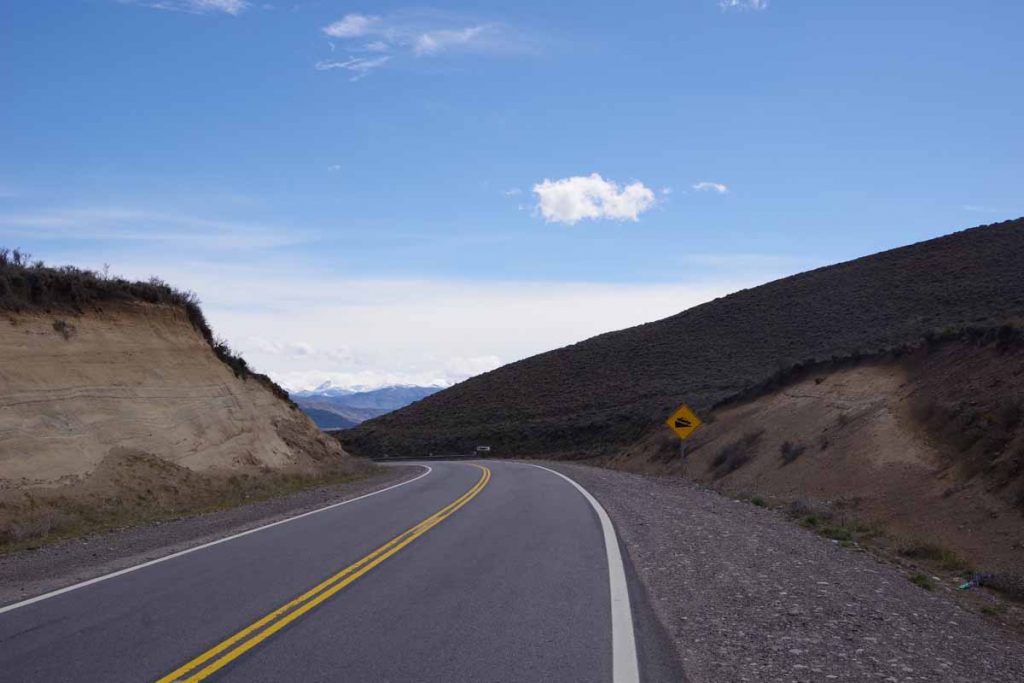 It was a welcome sign at the top to see the downhill. It was still windy but much easier to ride. This brought me the last 10 kilometers into Junin. 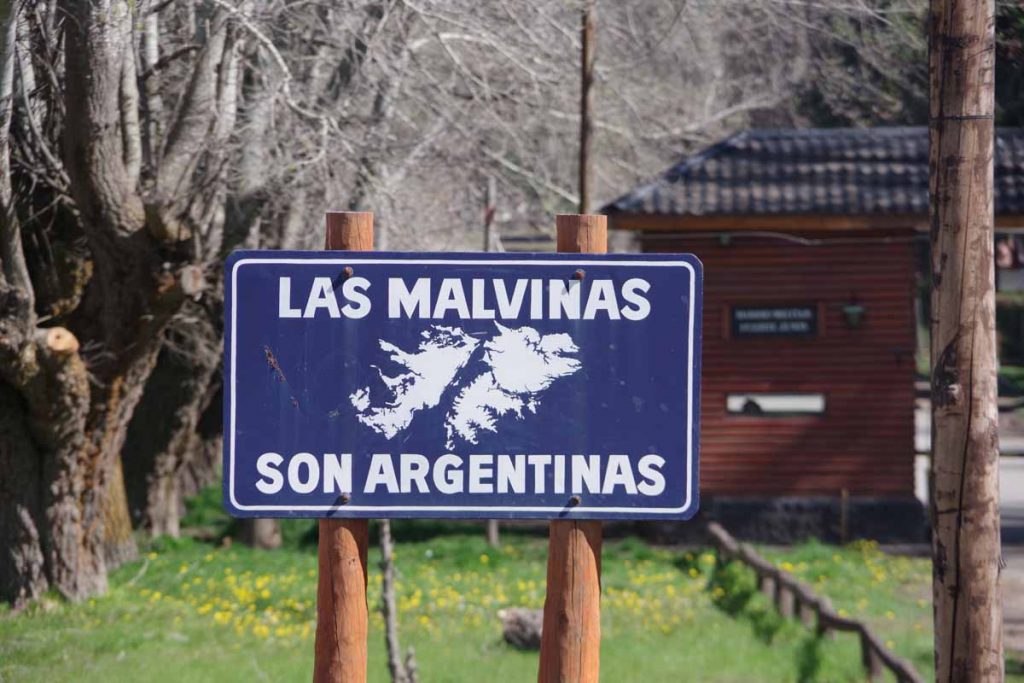 I knew I was close when I saw the Las Malvinas sign. 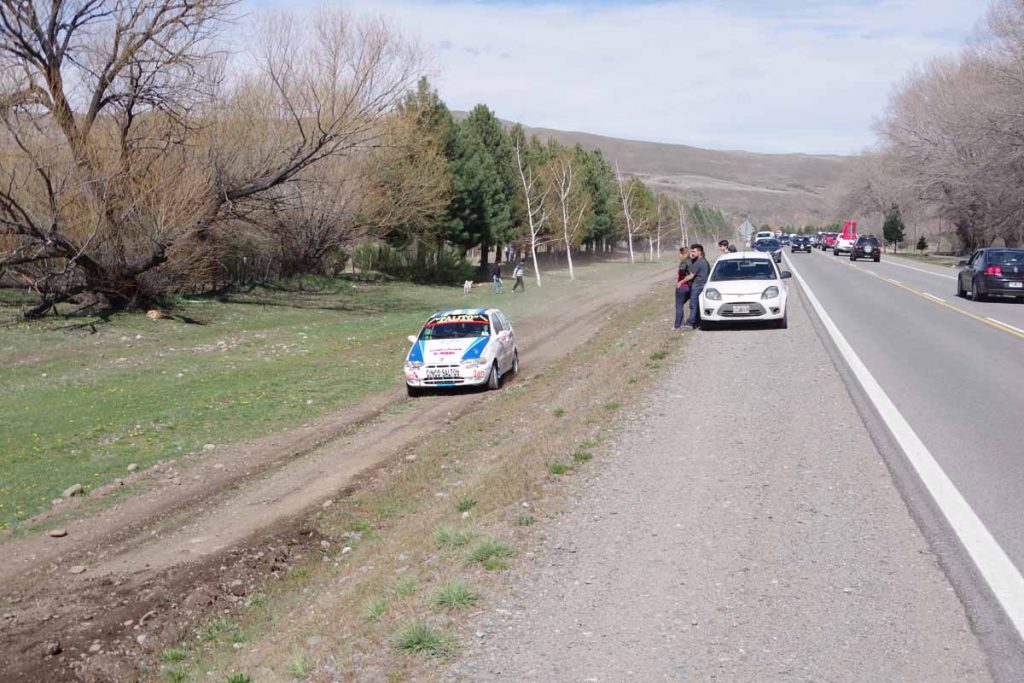 Just outside town there were cars racing around the track. Hard to see from this photo but the car on the left is zooming past.

This brought me to Junin de Los Andes. The town has many hotels and seems fairly spread out. I found a reasonable one but it doesn’t seem to be close to much else. Otherwise, looks like I am the more touristy lake district with a lot more trees than those barren places I passed to get here. It will be a few days to Bariloche, and not sure yet where there are towns but expect I’ll make a short day tomorrow to San Martin de Los Andes.