Two days cycling through the Argentinian Lake District have brought me to Villa La Angostura. It is beautiful riding and I can’t quite get enough of the snow-capped peaks along the way. Also hilly with many short steep little hills topping 10% grades.
Day One – San Martin de Los Andes
The weather forecast called for snow flurries in the morning and a shower or two in the afternoon. It was cold but I was pleased to find no snow showers and no wind. 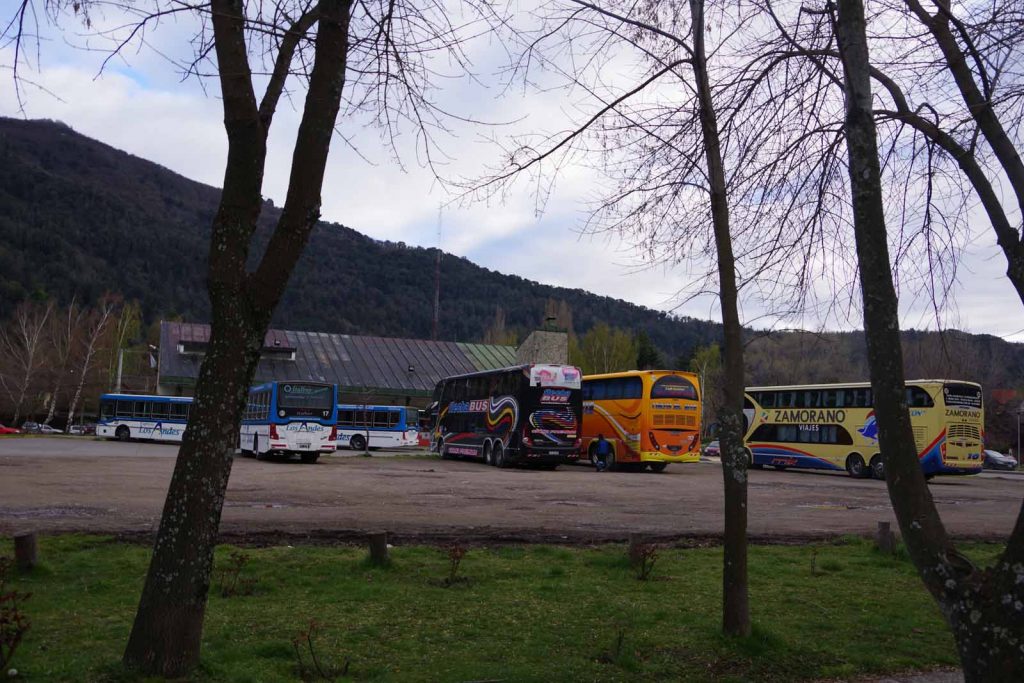 On the way out of town, I passed the bus station. Argentina seems to have many of these long-haul tourist buses and I’ve seen the same names on the road. 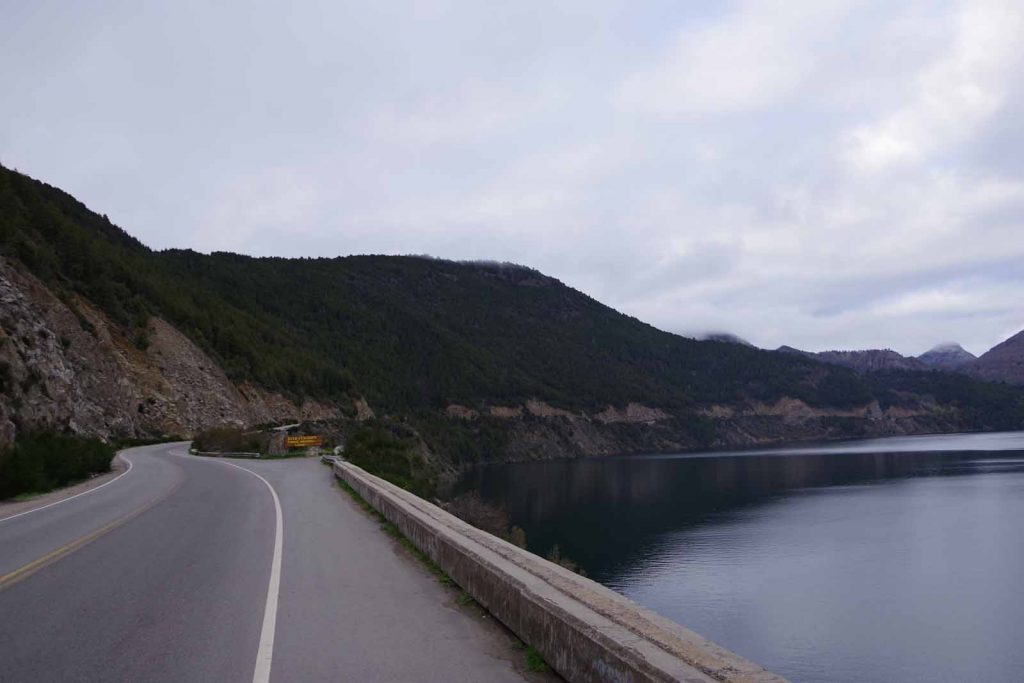 I passed perhaps half a dozen lakes today, the first one as I was leaving town. 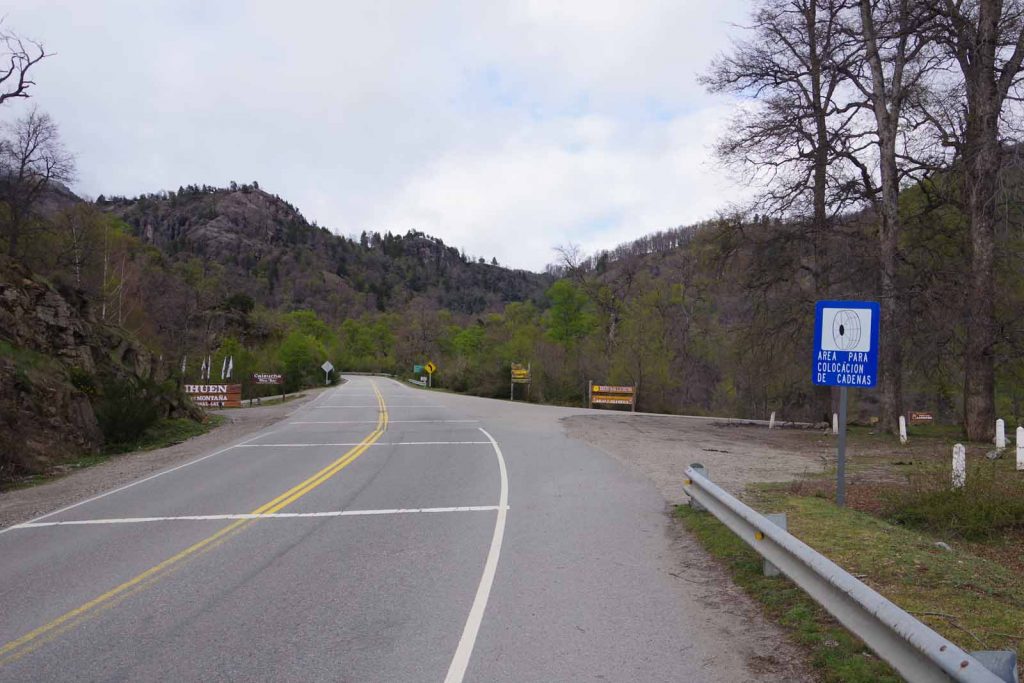 There was a 500 meter hill to climb and a sign indicating this was an area for tire chains. Fortunately, the road was dry. 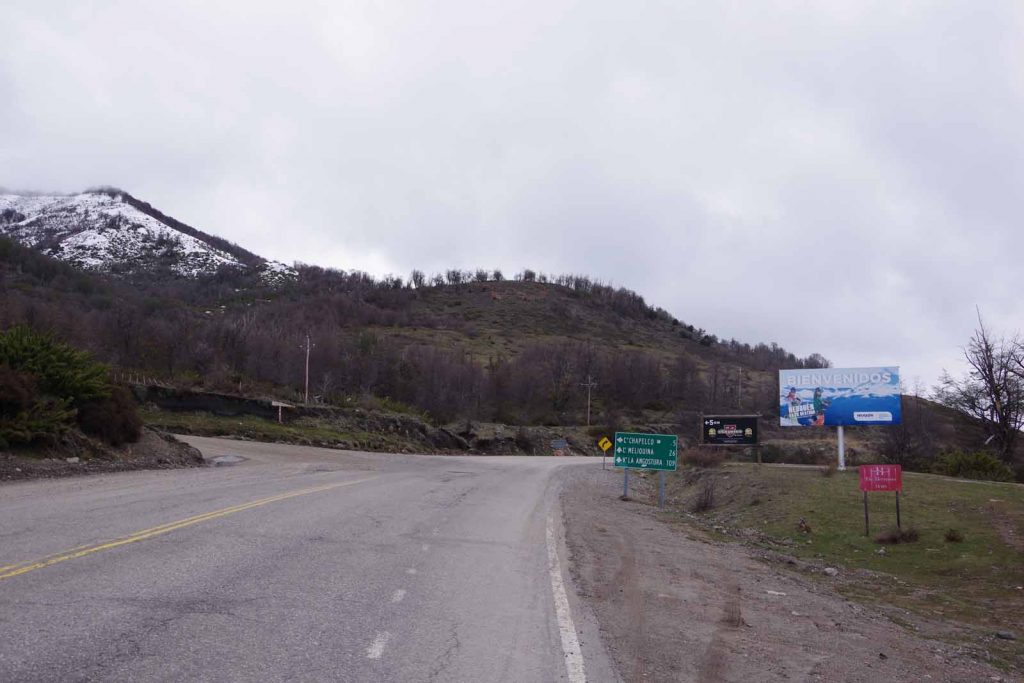 Close to the top was a turnoff to the ski area. Apparently still open at end of the season. 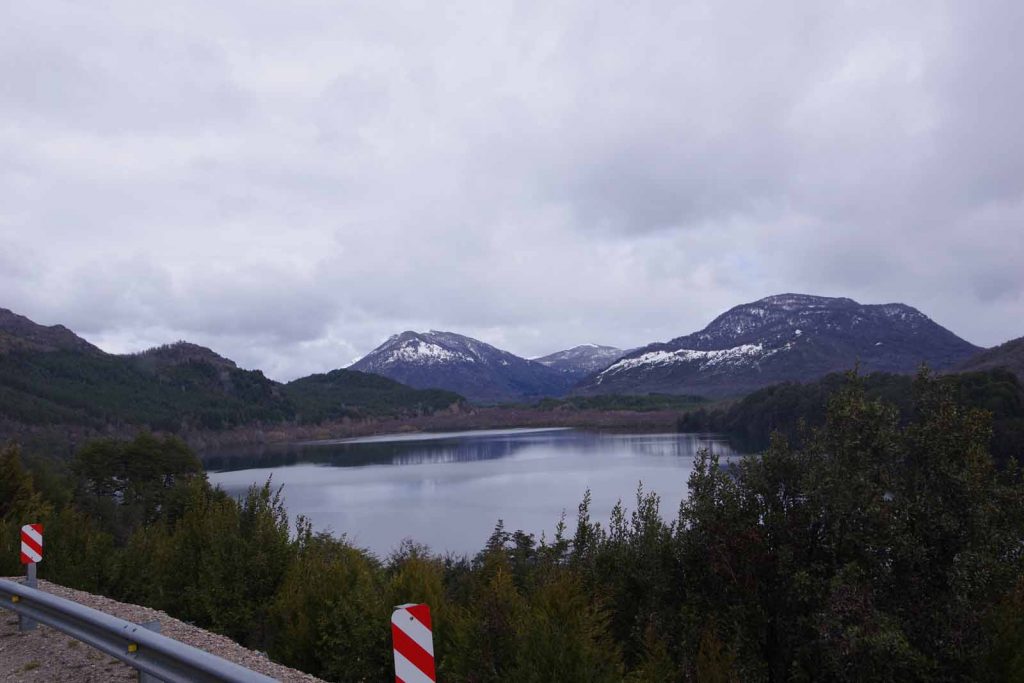 One of the lakes I passed along the way. 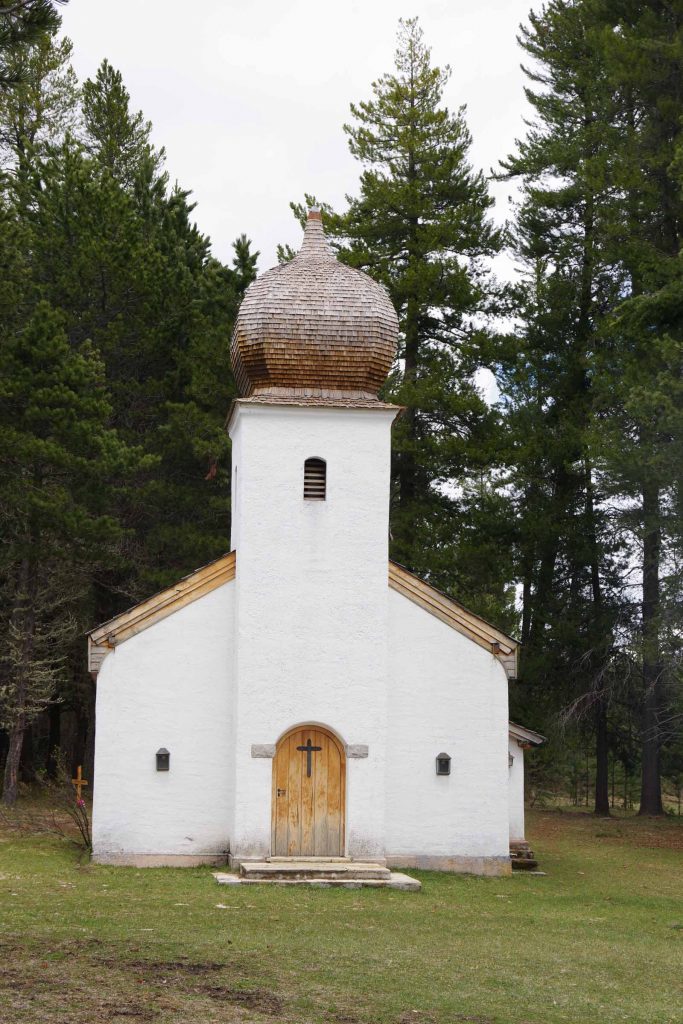 This small church was tucked in beside the road. 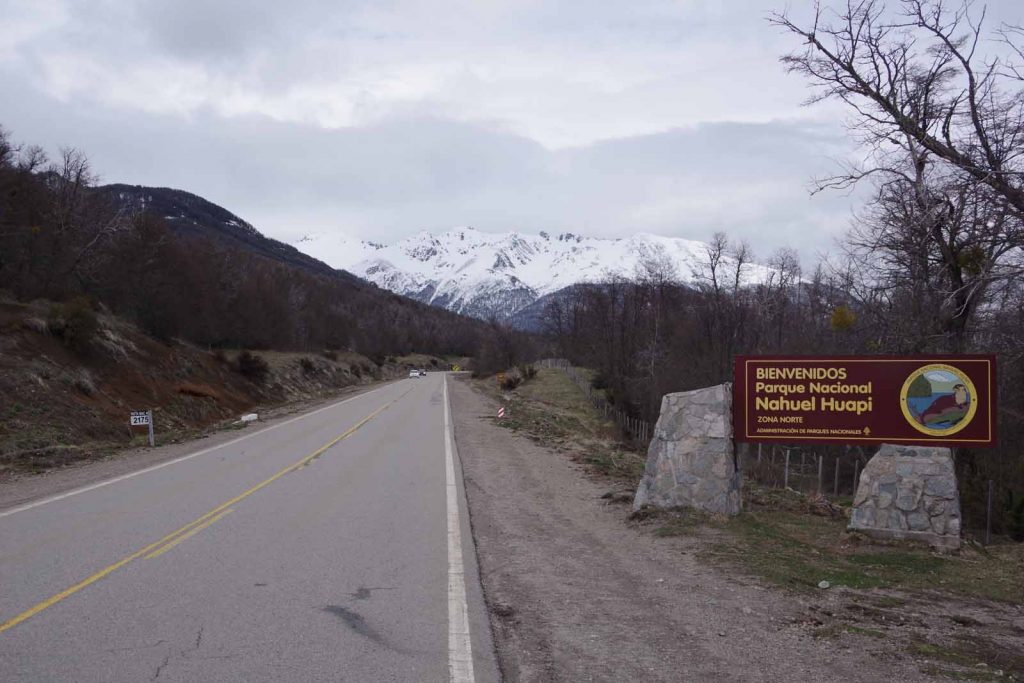 Sign for the second park I cycled through today.

At 60 kilometers I came to my selected stopping point near Lago Traful. There is a pay camping ground at the lake with a restaurant. However, earlier campsites I had passed were still closed for the season. So rather than go down to the lake, I went used the designated free camping area near the river.

Just as I started to put up my tent, it started raining. I got everything inside and was nice and dry as there was a light rain for the next four hours, stopping just before sunset. I was the only one camping in this area. Alex (boundlessbiker.com) had come past earlier in the morning but was headed further. He has hopped back and forth across the Chilean border a few times. 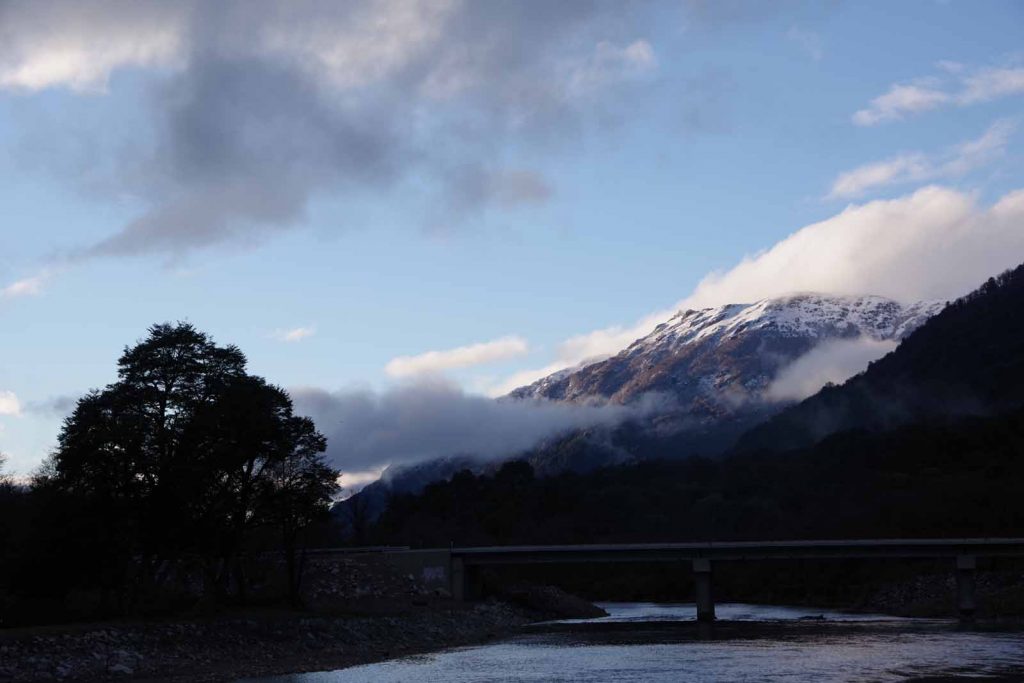 A scene from my campsite this morning. It was below freezing and didn’t warm up past freezing until after 10am. 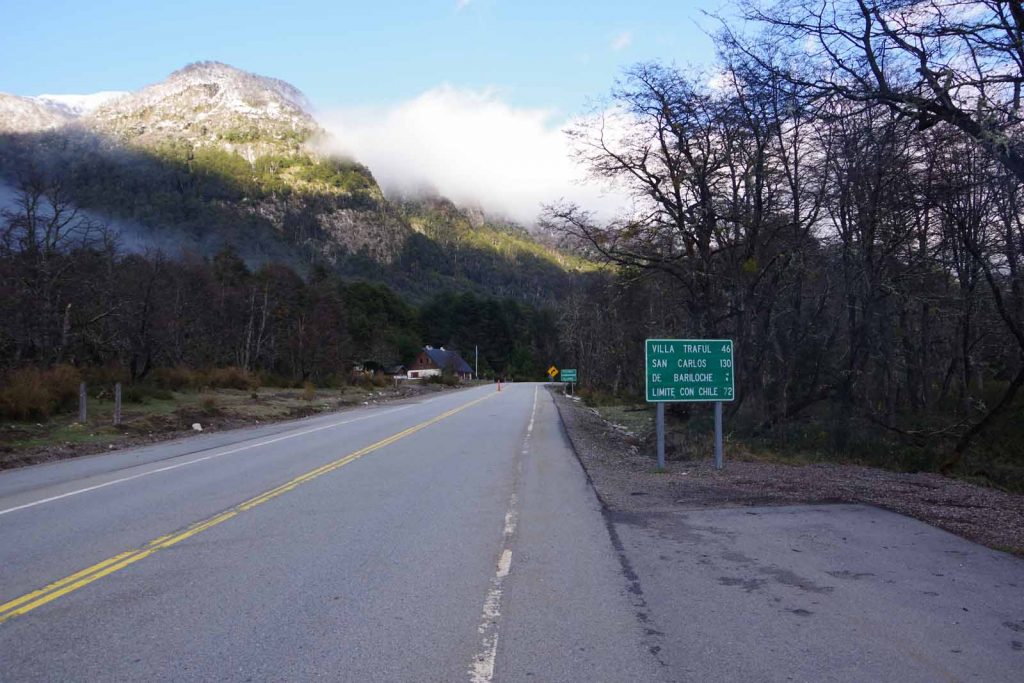 Getting closer both to San Carlos de Bariloche as well as the Chilean border crossing. This crossing is the closest one to Bariloche. 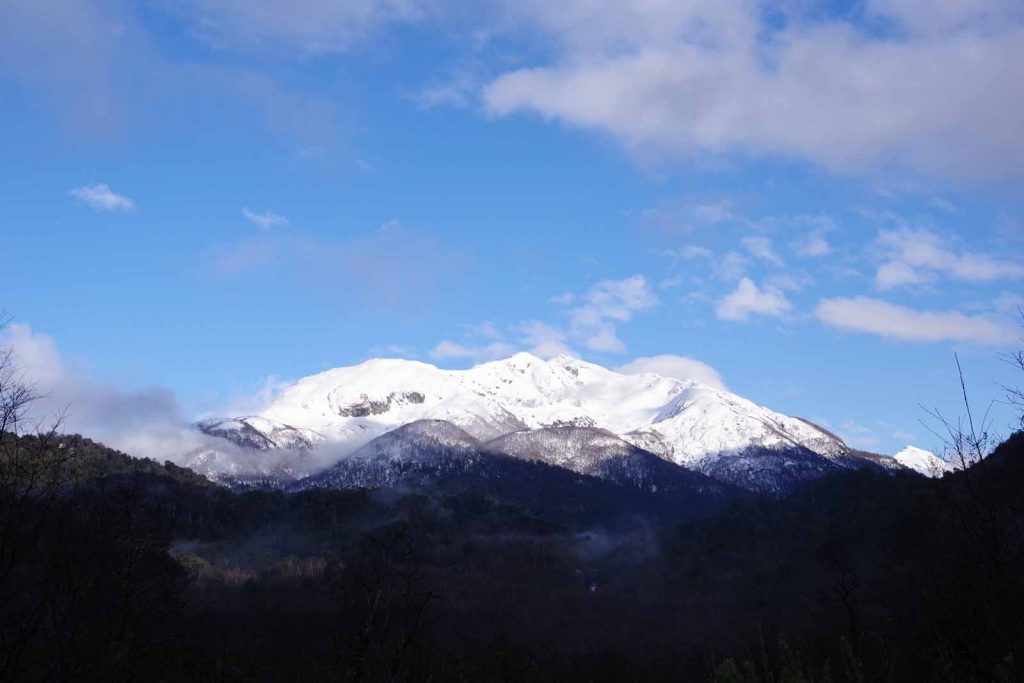 One of many snow-capped peaks along the way today. 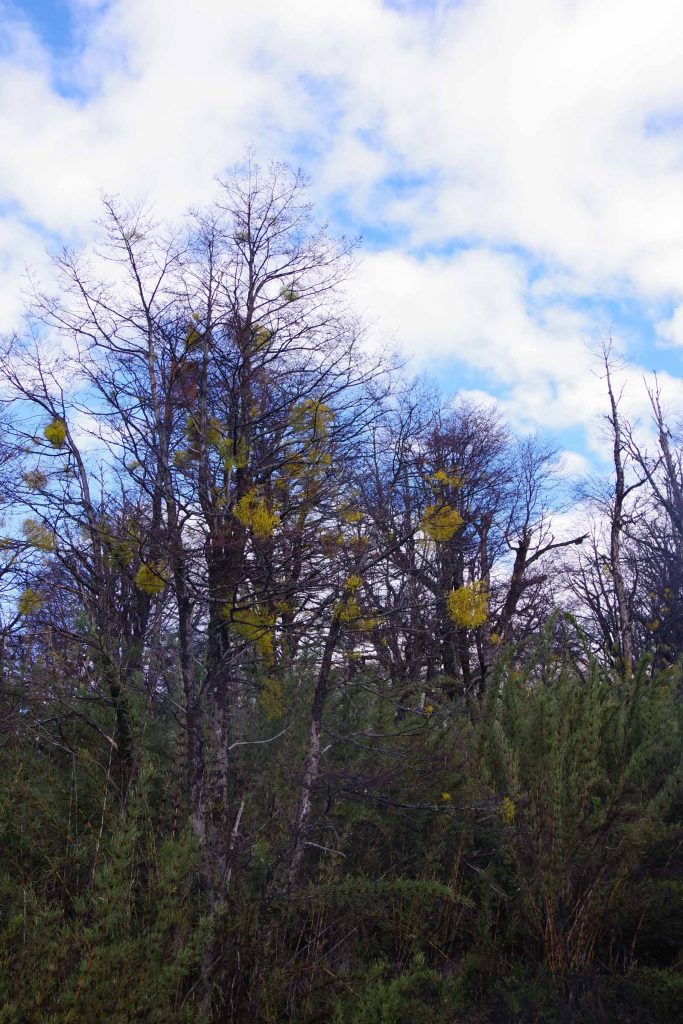 The trees seem to have some sort of parasite on them. Also looks like it is still early in spring so normal leaves have not come out yet.

I met an Argentinian at one of the viewpoints who told me spring was a notoriously poor weather season for Patagonia. I couldn’t quite tell if he was referring to this year or in general. However, this year it seems the Chilean side has had periods with multiple days of rain and the Argentinian side has had multiple days of high winds. In that regard, it will be nice to spend some time in Bariloche and let the seasons catch up before heading further south. 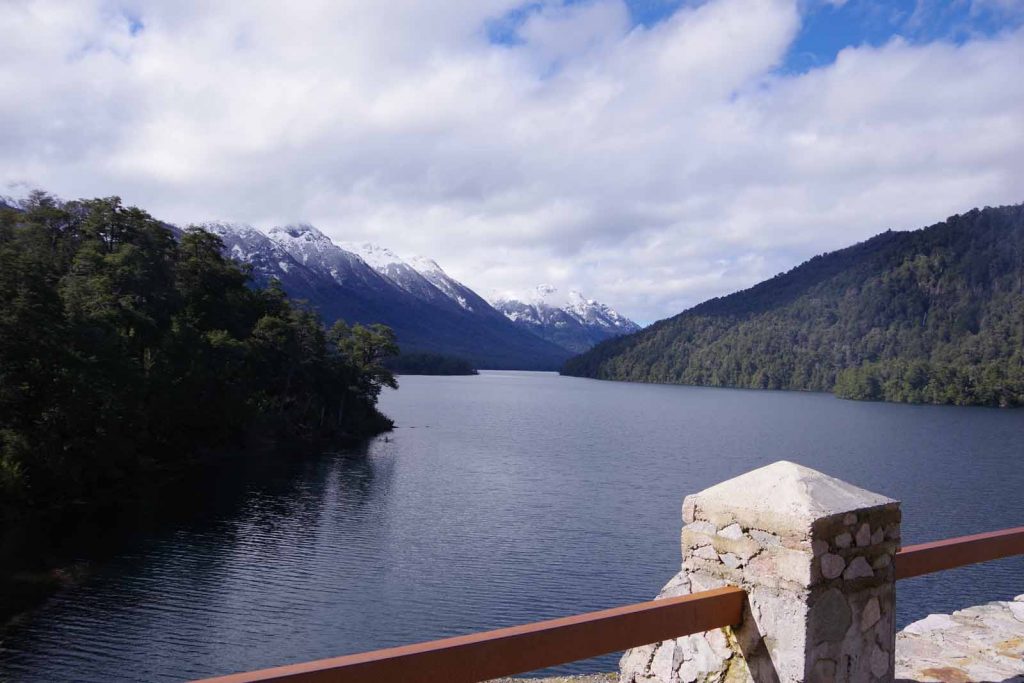 Viewpoint at one of the lakes along the way. It was a nice sunny spot and much warmer than riding had been up to this point. I could shed some mittens and clothes I had bundled up and warm up here in the sun. While I was taking a break, at least four tour buses arrived with passengers all waiting their turns to take an obligatory shot of family members and the sign in front of the lake. 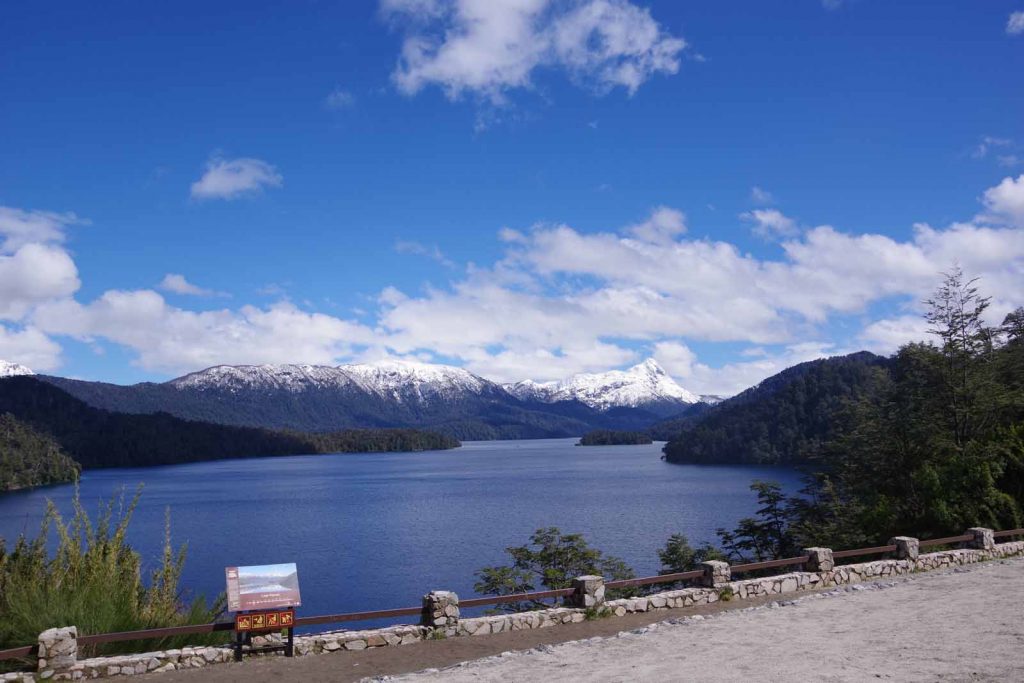 Next lake along the way. I couldn’t get enough of these views. 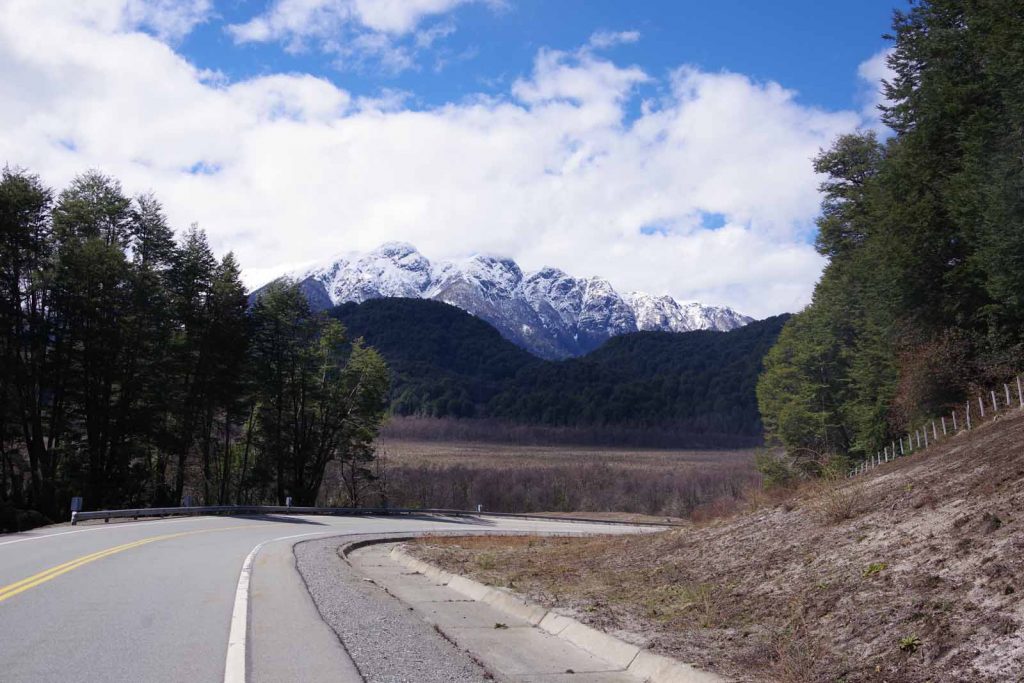 Not sure why, but the snow on the peaks ahead reminded me of powdered sugar on Dutch olliebollen. Maybe I was hungry. 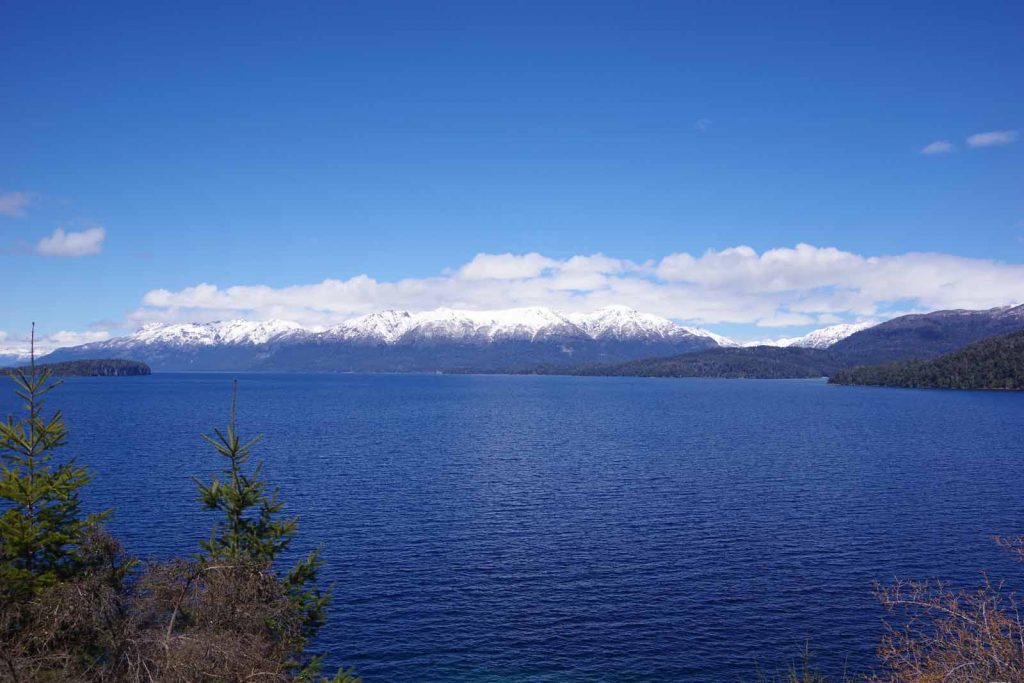 Next lake along the way. 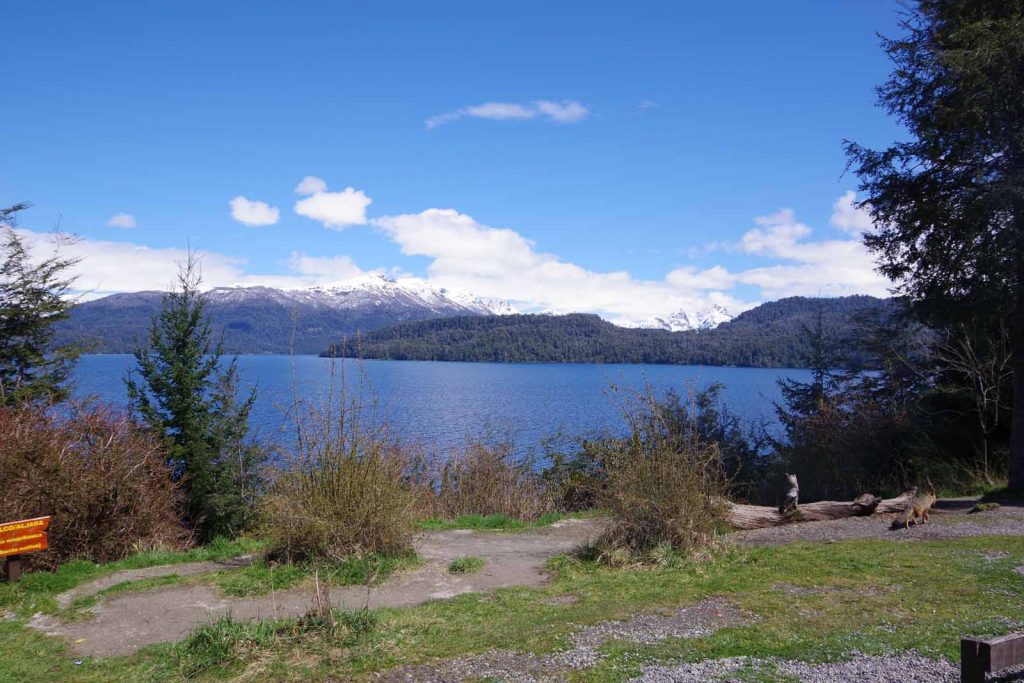 There was a fox here that was remarkably unafraid of people. Some others tossed him food, but I figured best to stay clear. 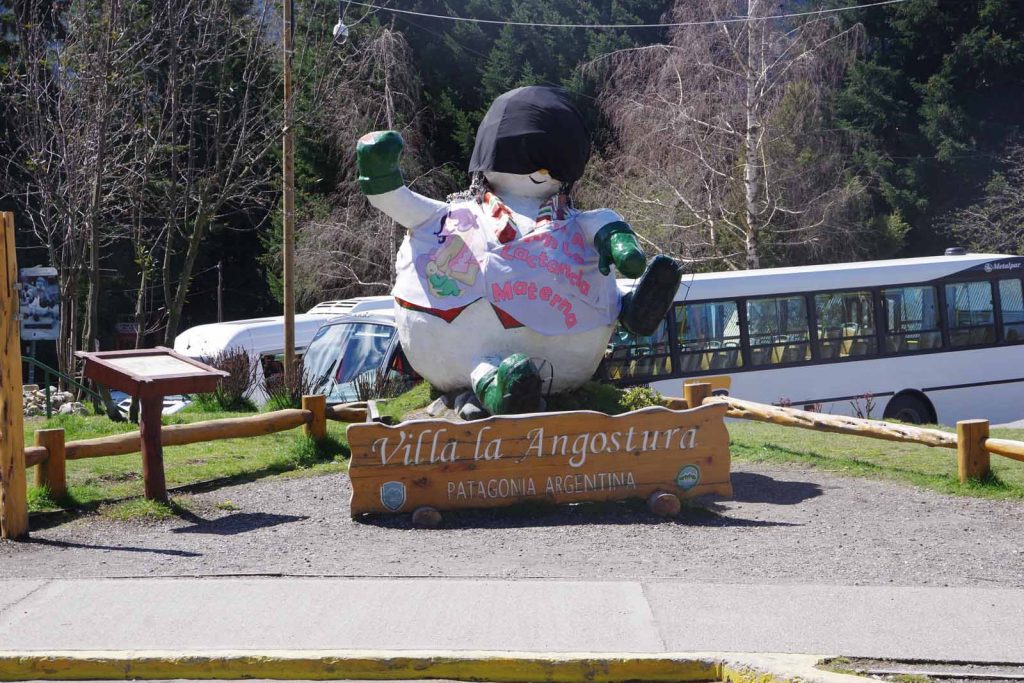 I was at Villa La Angostura early. This is a small tourist town spread along the lake. Many signs for tourist hotels and similar services. 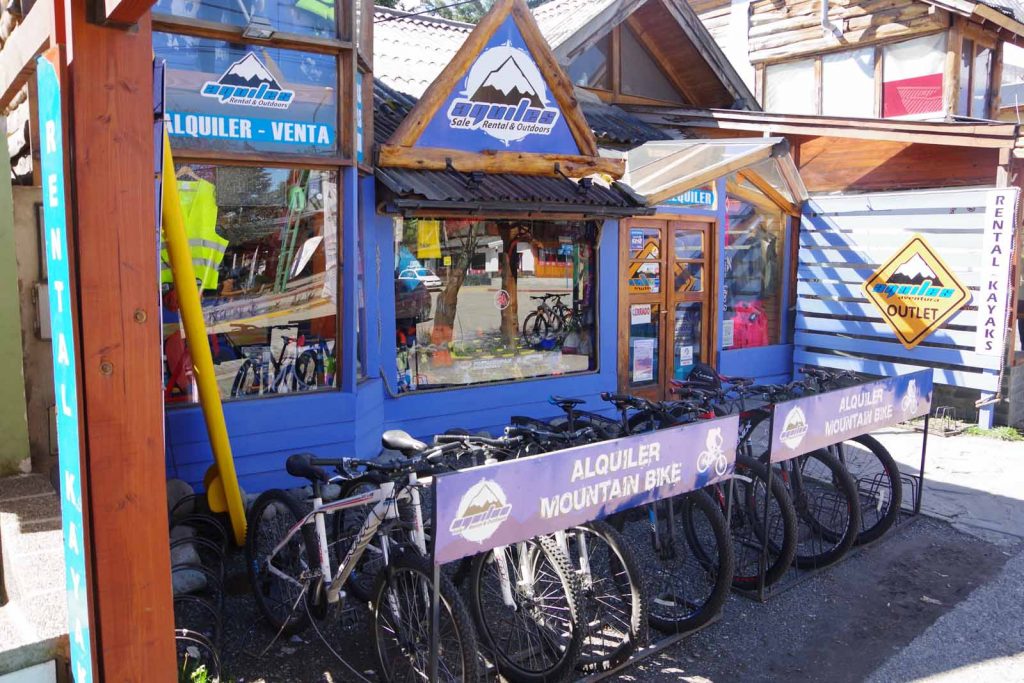 It is even possible to rent mountain bikes and skis here. 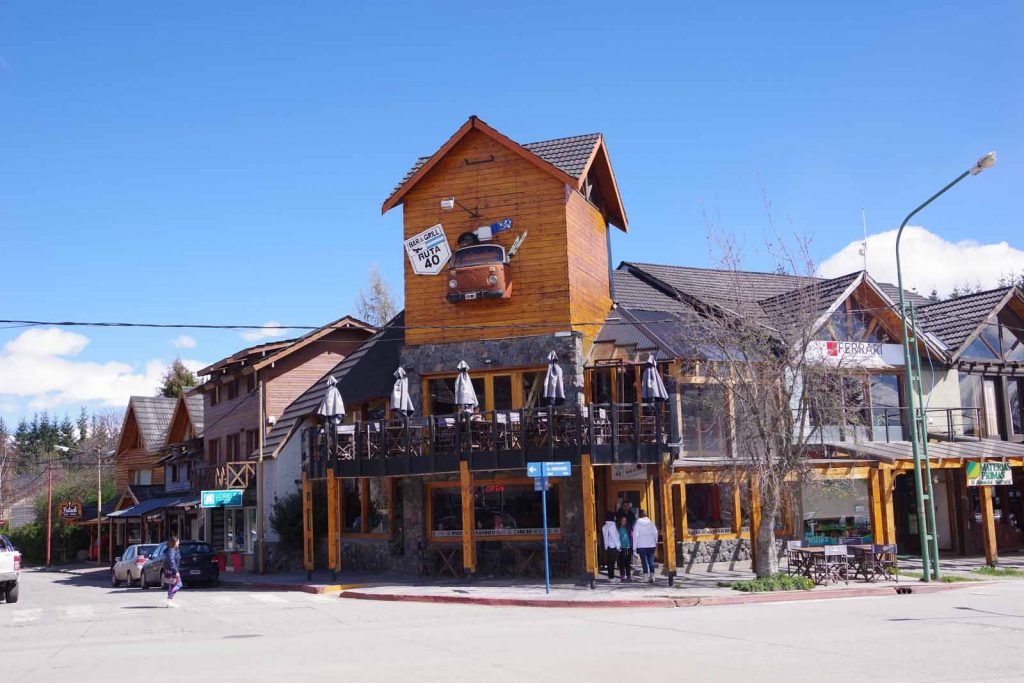 Otherwise nice place to stop early in the day and get everything caught up on the web. Still in a beautiful touristy area between seasons. Once can both mountain bike and ski, but seems like it is very late in ski season and still cold to do much mountain biking.