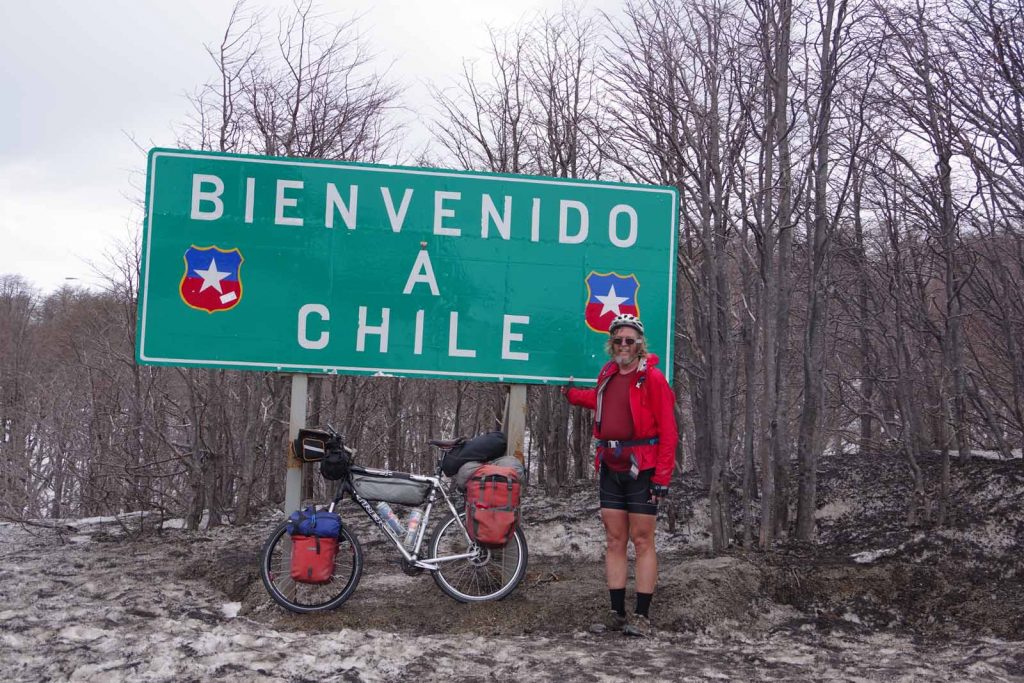 Two days cycling have brought me to Chile. 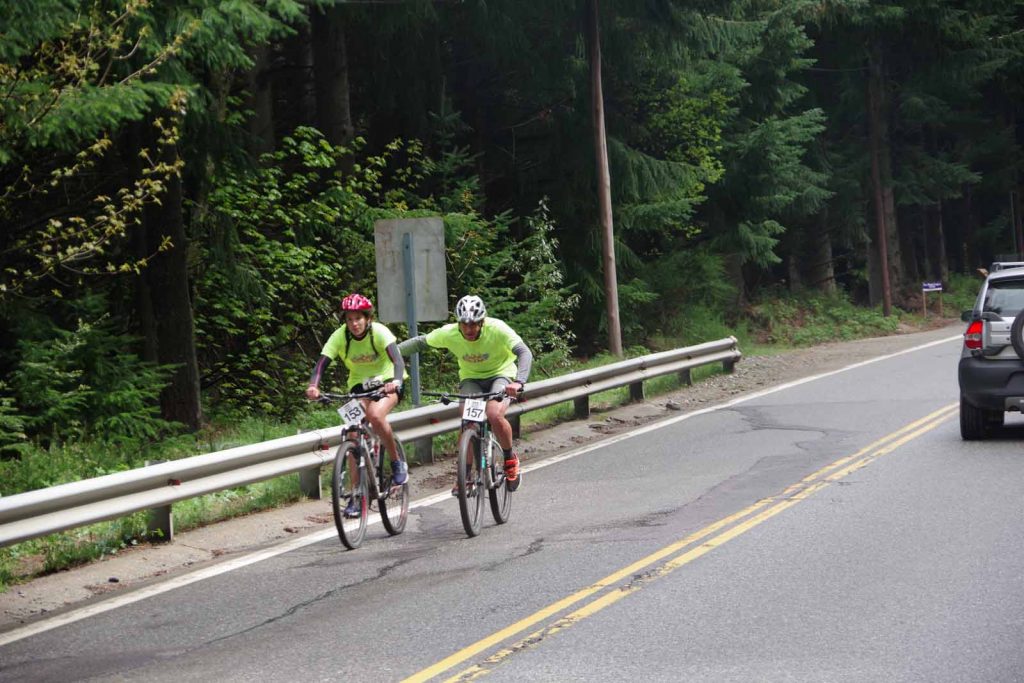 I had taken an easy day in Villa La Angostura. Went for a short ride on my day off and encountered a group that seemed to be on a bike race/ride coming the other direction. 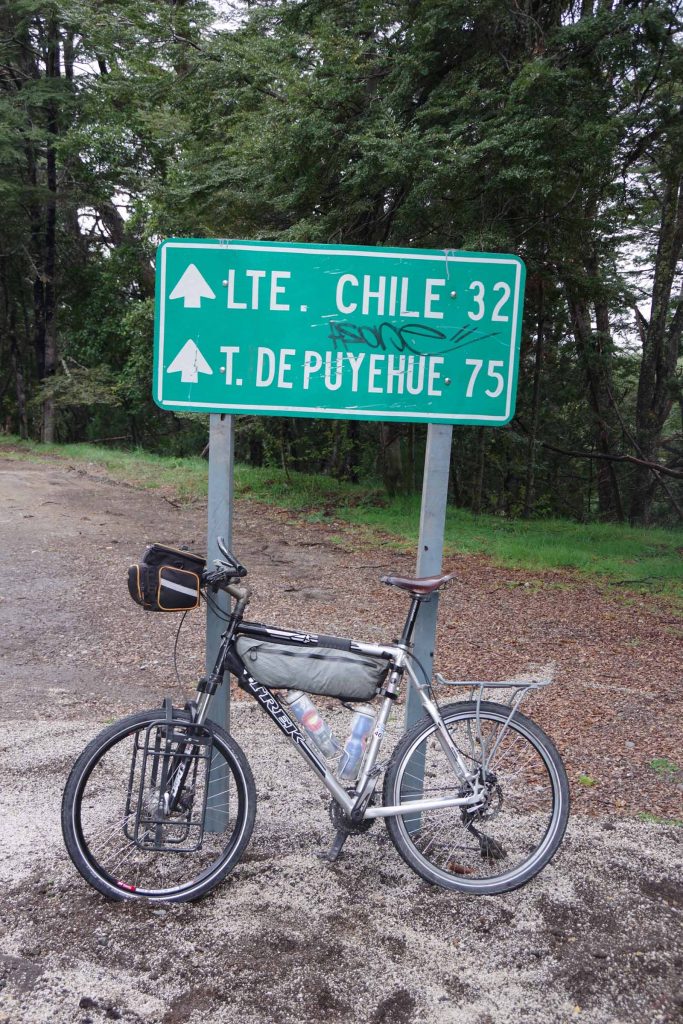 Once I got to the turnoff of the road heading to the border I turned back and otherwise had an easy day. 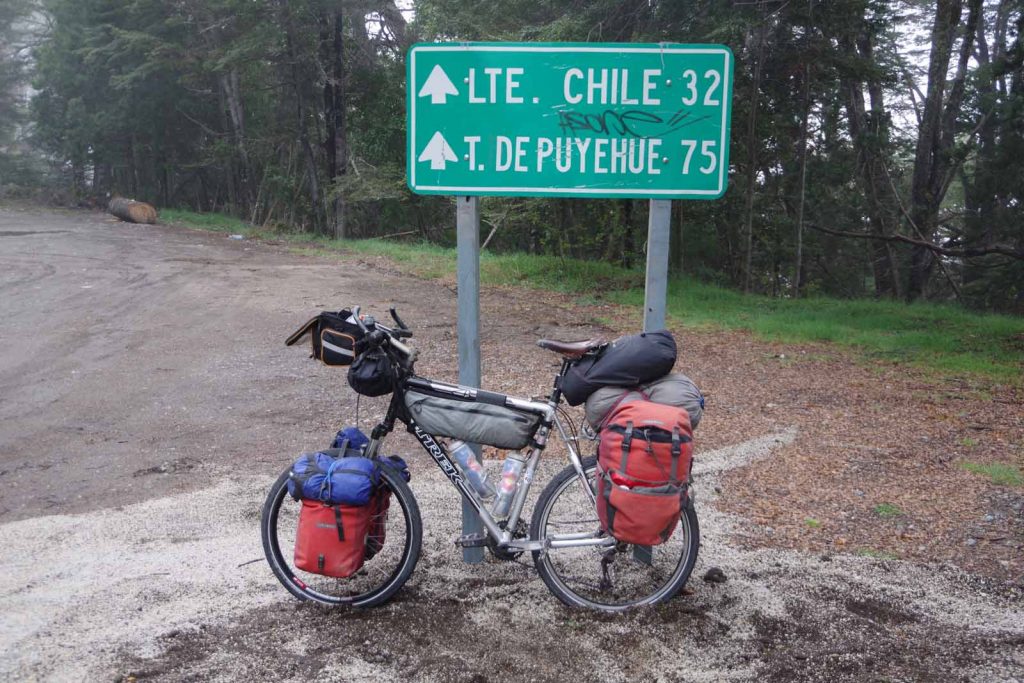 Next morning I was back on the road. Reached the turnoff sign, this time with a loaded bicycle. It was 15 kilometers to the border station but another 17 kilometers after that to the border.

Overall it was a beautiful area as I slowly climbed past snowcapped peaks. 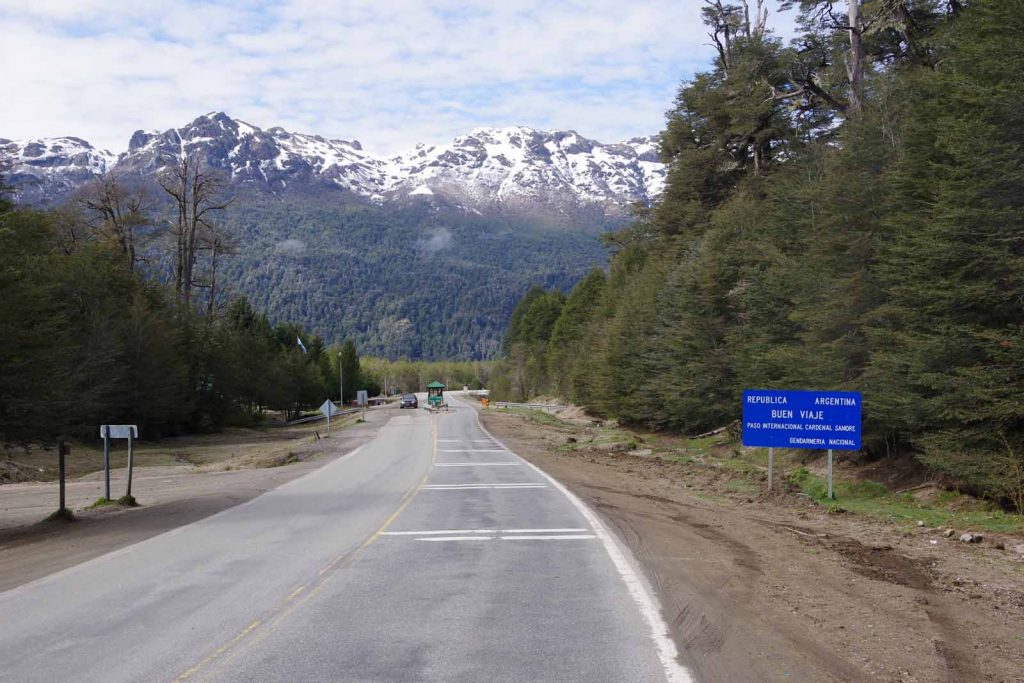 This was just before the border station.

The border controls were simple. Just prior to the border, I passed a police kiosk on the road. They handed me a paper with room for several stamps. At the border itself, I needed to complete the stamps: first to have my passport checked, second to look at other documents and then back out. A little past the border control was a second police kiosk where I now handed off my stamped paper. 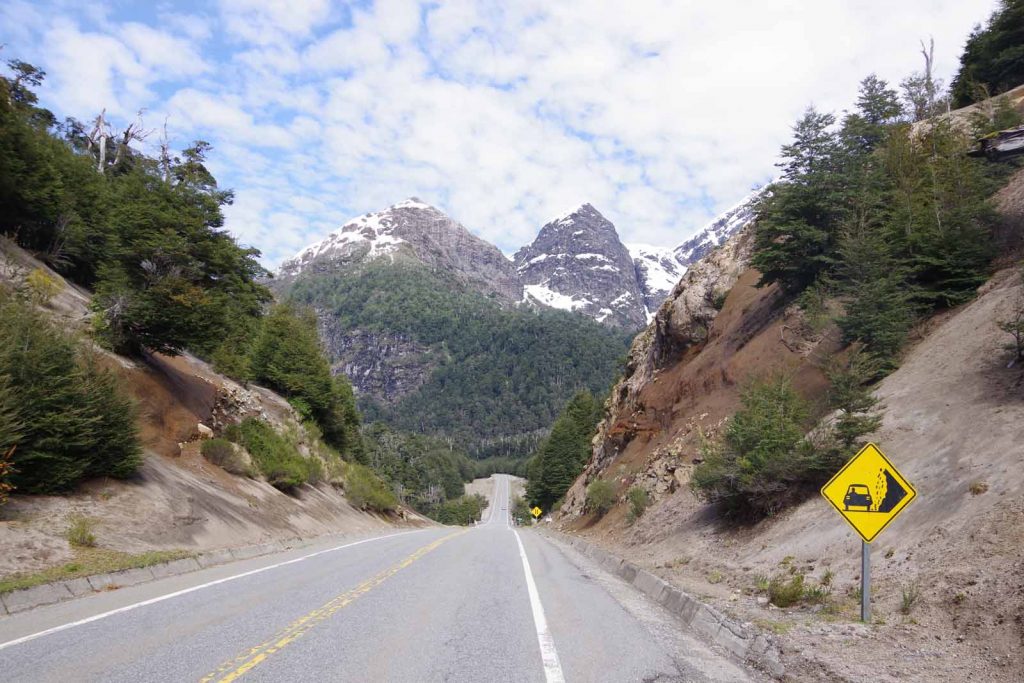 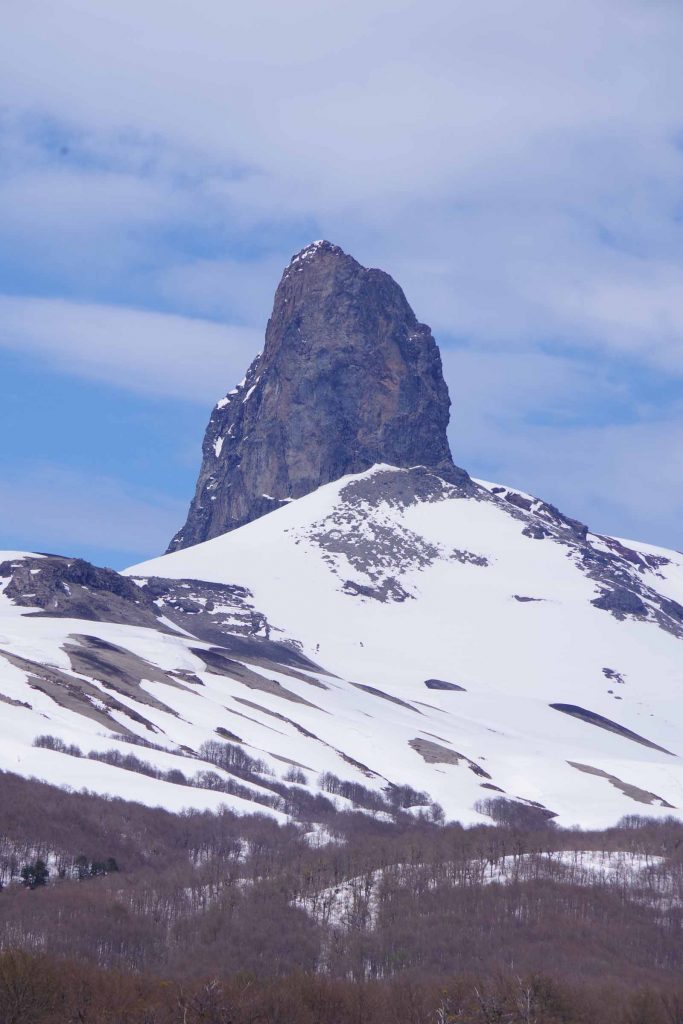 One of the volcano peaks near the summit. 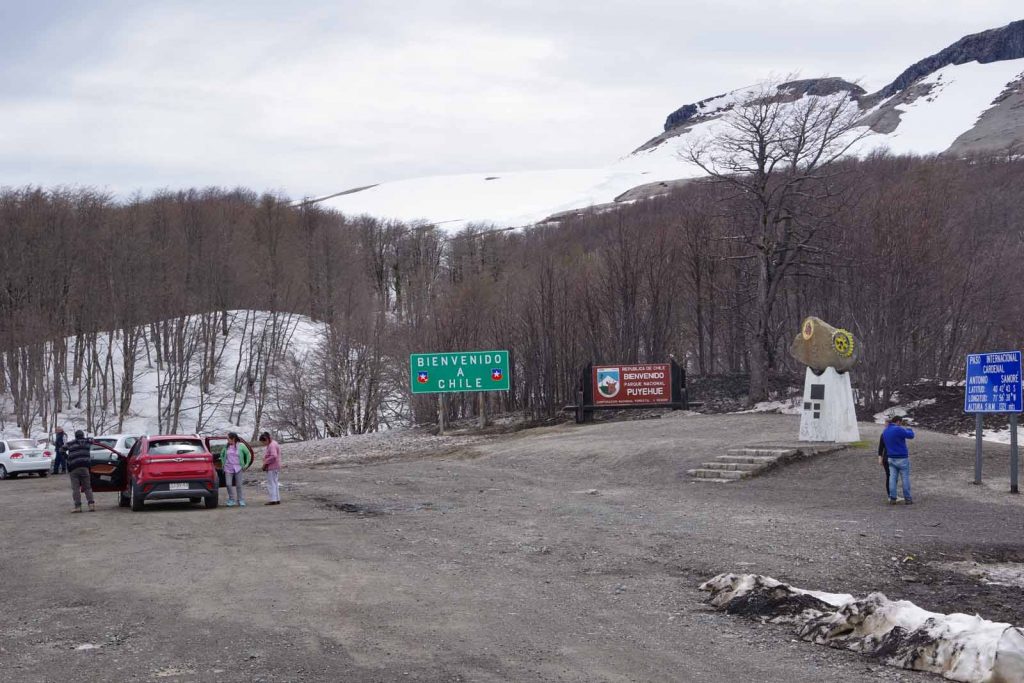 The summit area itself, where I took the photo at top of this page. 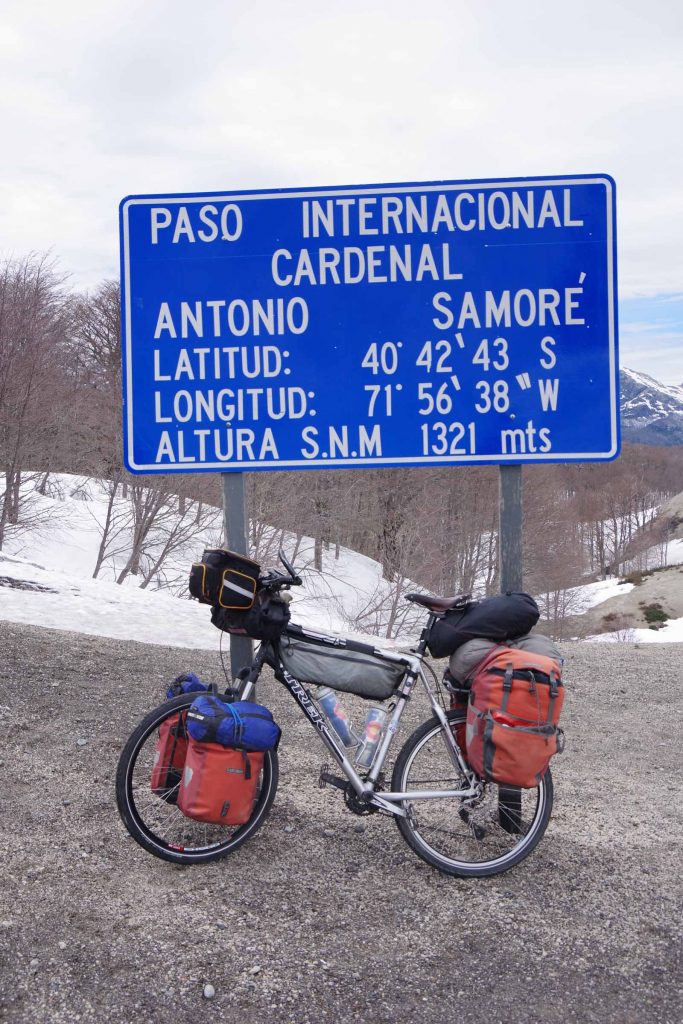 Elevation 1321 meters. Not as high as further north, but still high enough to have snow everywhere. 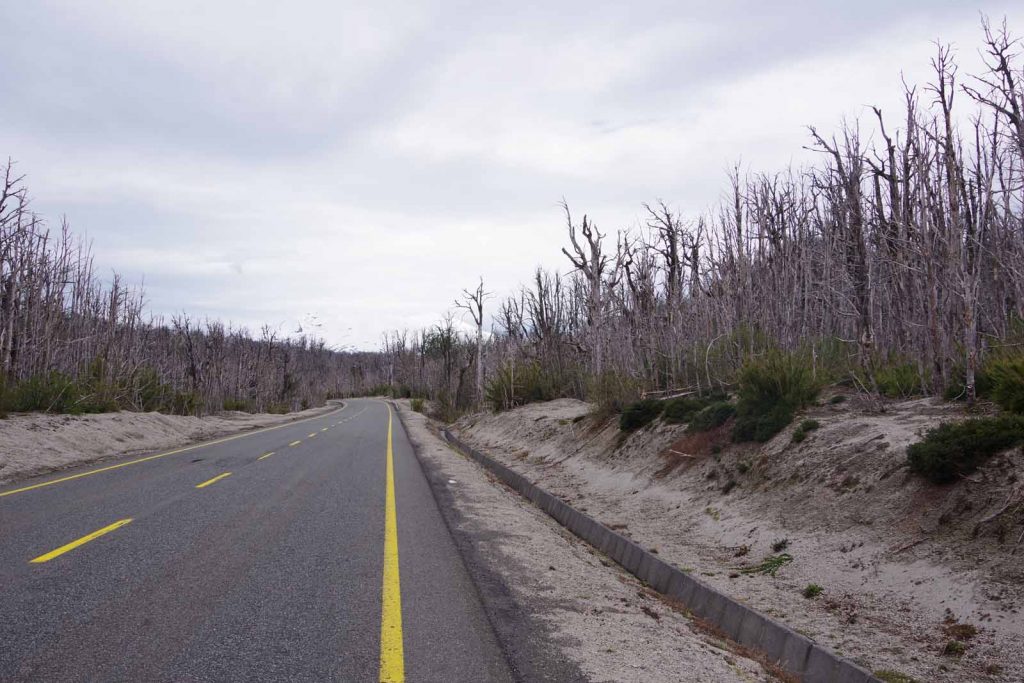 After this a good descent down from the pass. I passed through this area where the trees were all dead. I believe this area had a volcanic eruption two years ago or so and assumed the ash along the road and dead trees were related, though the trees might have died from other causes.

Near bottom of the hill I reached the Chilean customs. They also used the method of having an extra paper that contained stamps for each of the steps. I first went to the passport control. My passport was carefully examined and I got a stamp for Chile. Next stop was customs control. I completed the customs declaration and indicated I had with me dairy (cheese) as it was listed along with fruits and vegetables as one item under control. Once the customs official realized I was traveling by bicycle, she called me back and had me provide details of my bicycle so she could write up a document that carefully described the bicycle that I was “importing”. I saved this document away as I expected it could come in handy on exit from Chile. The final stop was outside where inspections were performed.

I now learned what happens when you declare cheese on your customs declaration. They made a quick inspection of rest of my bags, though didn’t open everything (presumably realizing I was honest enough to declare the cheese and not finding anything on the other bags they quickly checked). I was given an option of eating the cheese right then – so ate several bread rolls with cheese. I showed them the empty cheese package and they then stamped my third stamp indicating the inspection was passed.

I cycled to end of the customs station and away. It was mostly downhill from here, though several steep little uphills as well. Overall the day had more than 1400 meters of climbing and only 500 of that was net climb from Villa La Angostura to the top of the summit. 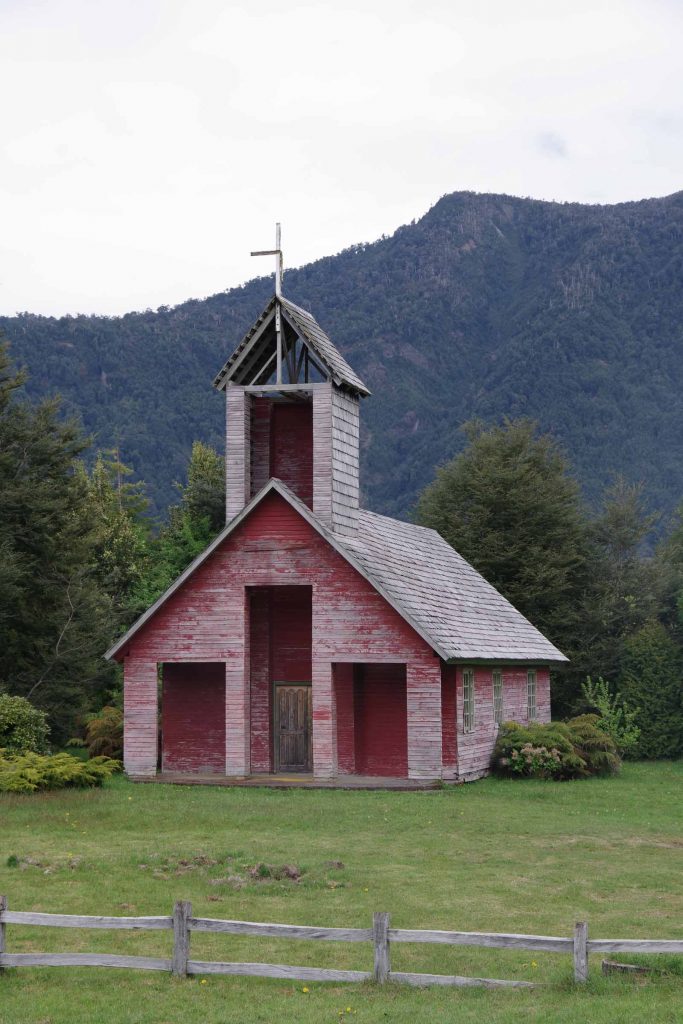 Here was a small church I passed along the way. 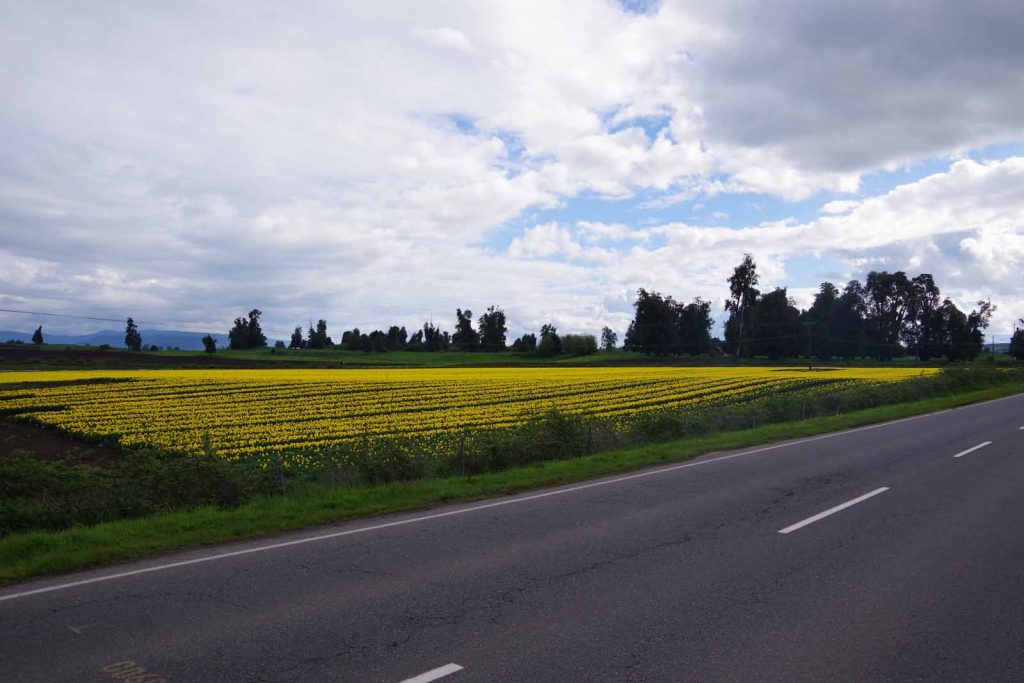 This field of tulips was close to a large company that indicated it grew the bulbs.

Once I came close to Lago Puyehue, I came past more tourist vacation areas. Peak season appears to be January and February so many places were still closed. I stopped briefly at a store and then not much later passed a campground where I stayed for the night. There was only one other party camping there that evening: two young women from Boulder, Colorado who were in Chile and Argentina skiing volcanoes. I was impressed that even this late in the season (November), it was still possible to ski.

Day Two – Lago Puyehue to Osorno
It rained overnight. Not hard, but enough that I packed a wet tent. There was also off and on drizzle on my ride today. 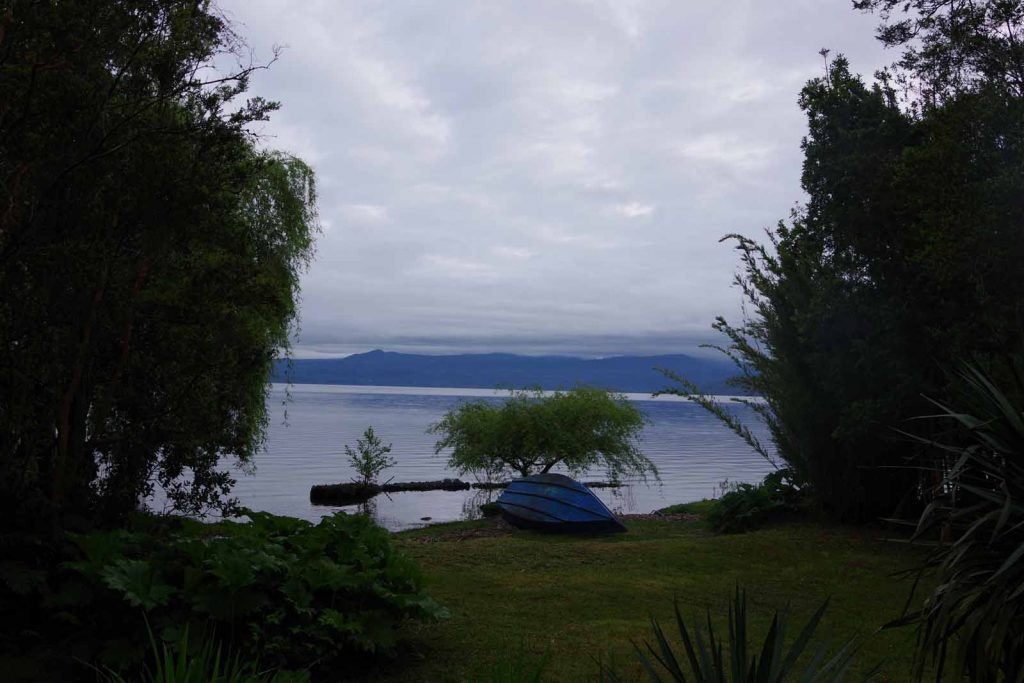 Picture of a boat by the lake, taken at the campground. 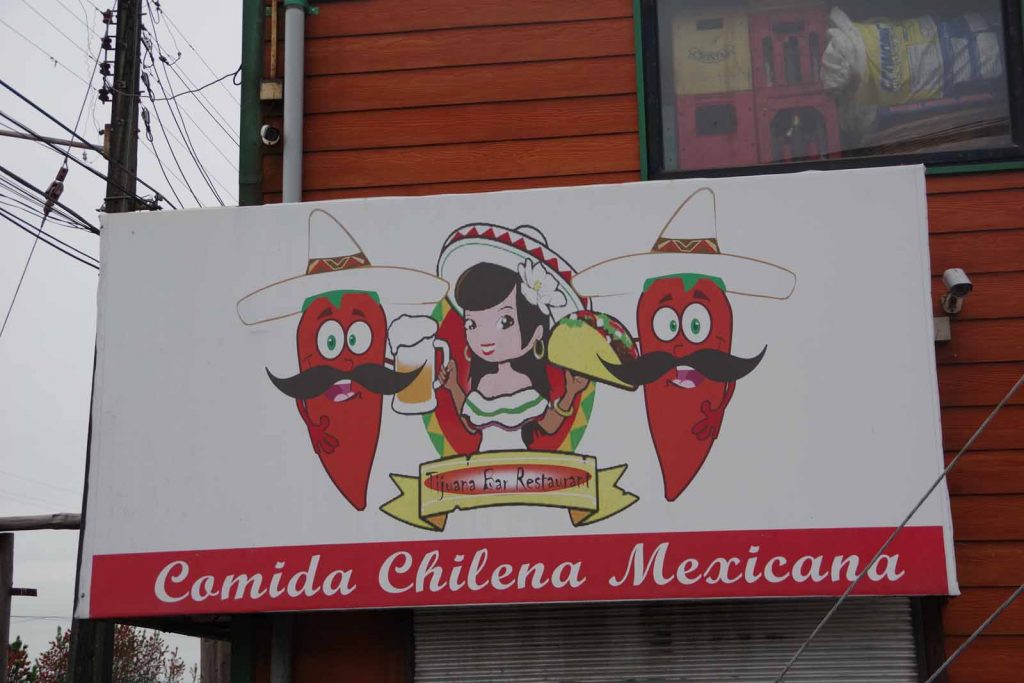 The little village of Entre Lagos was 9 kilometers away. This restaurant was closed, but thought their sign was amusing. 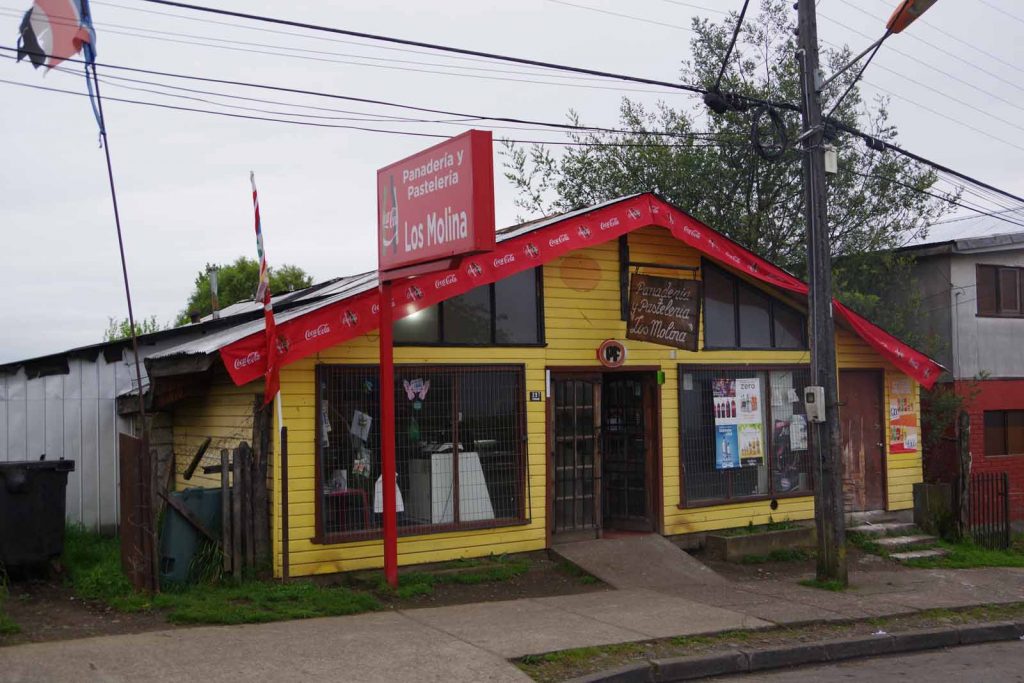 This bakery was fortunately open. I bought breakfast items here. 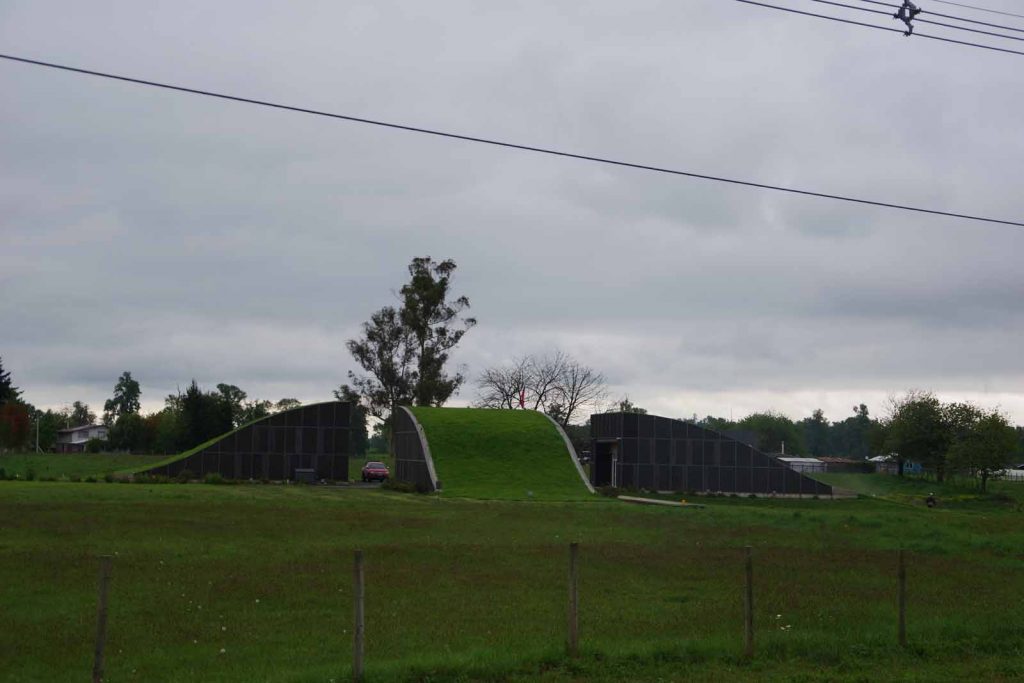 Along the way, I passed this interesting looking set of dwellings that seemed to be partially underground. 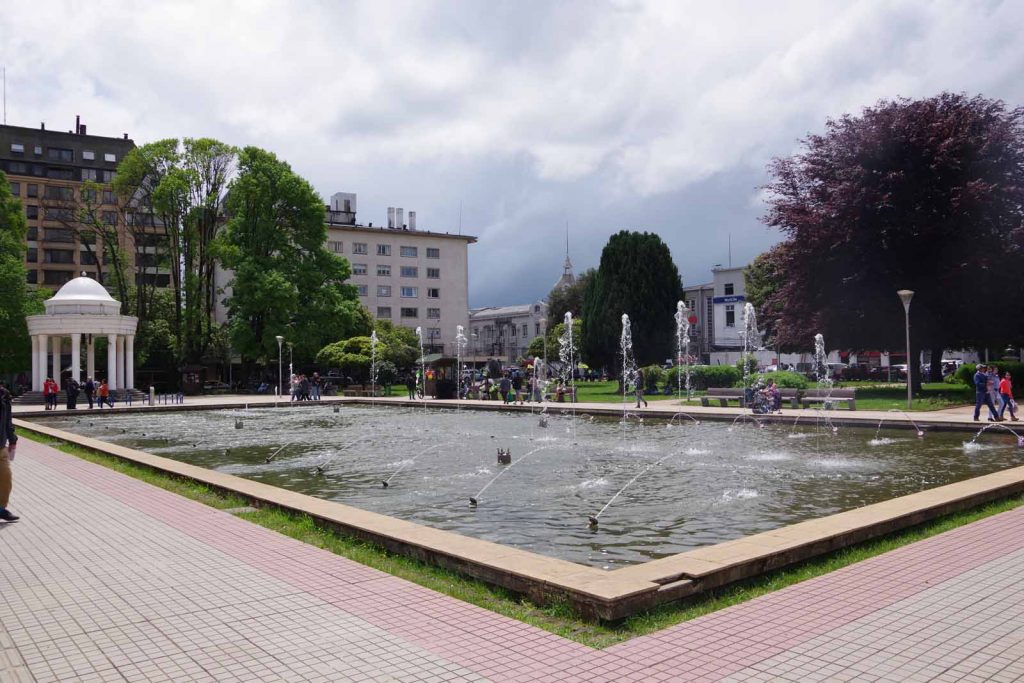 The road slowly became busier until I reached middle of town of Osorno. This is the central square. 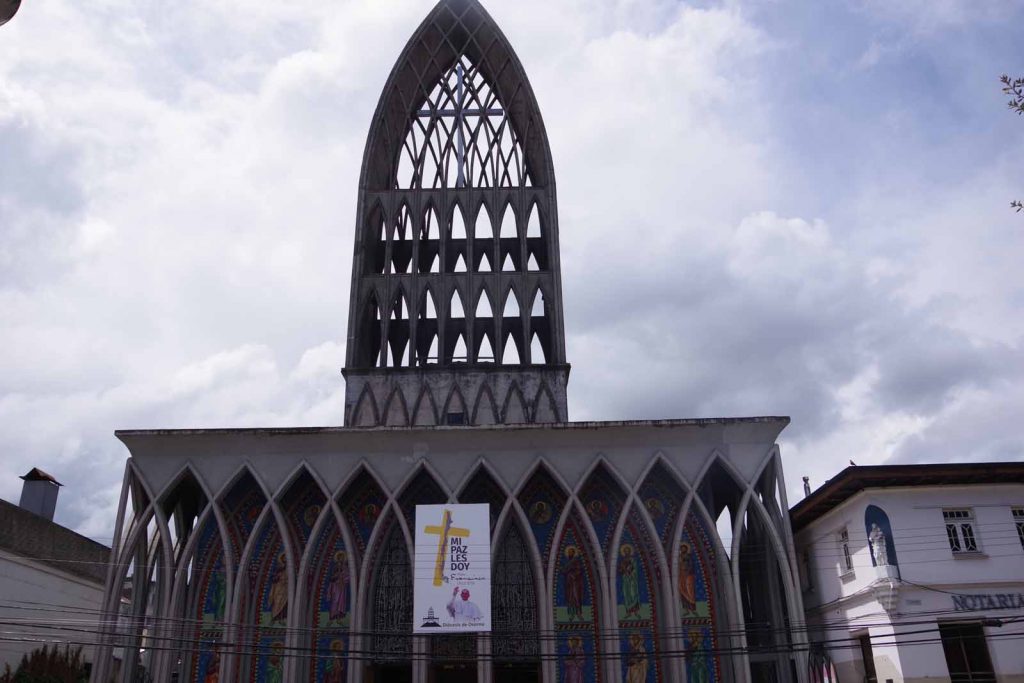 There is a large church on the square. 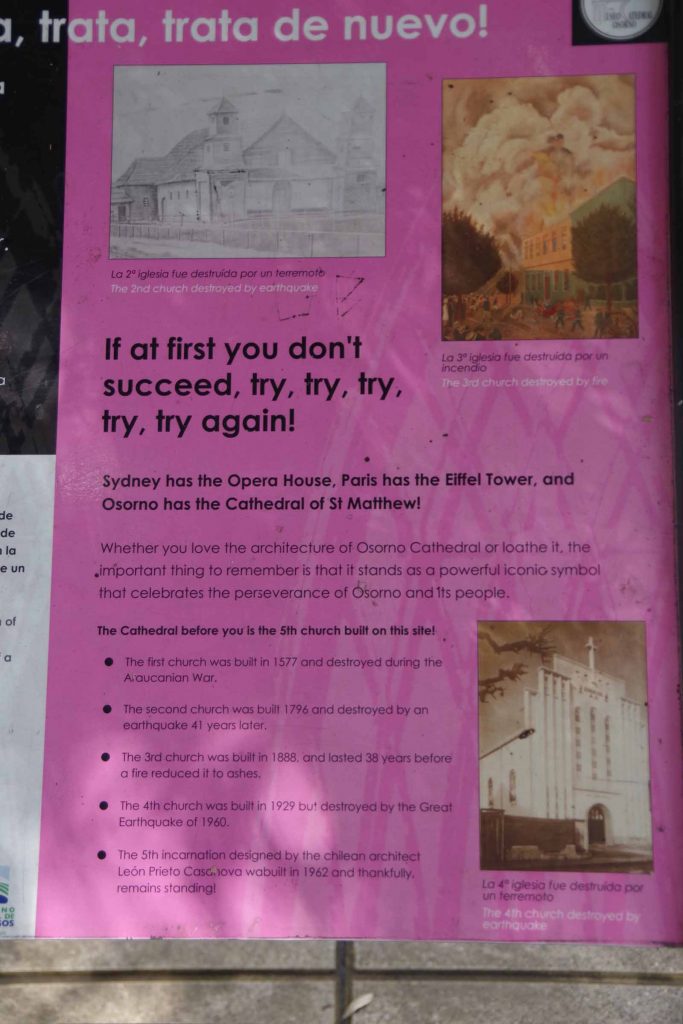 Apparently the fifth church built in this location. 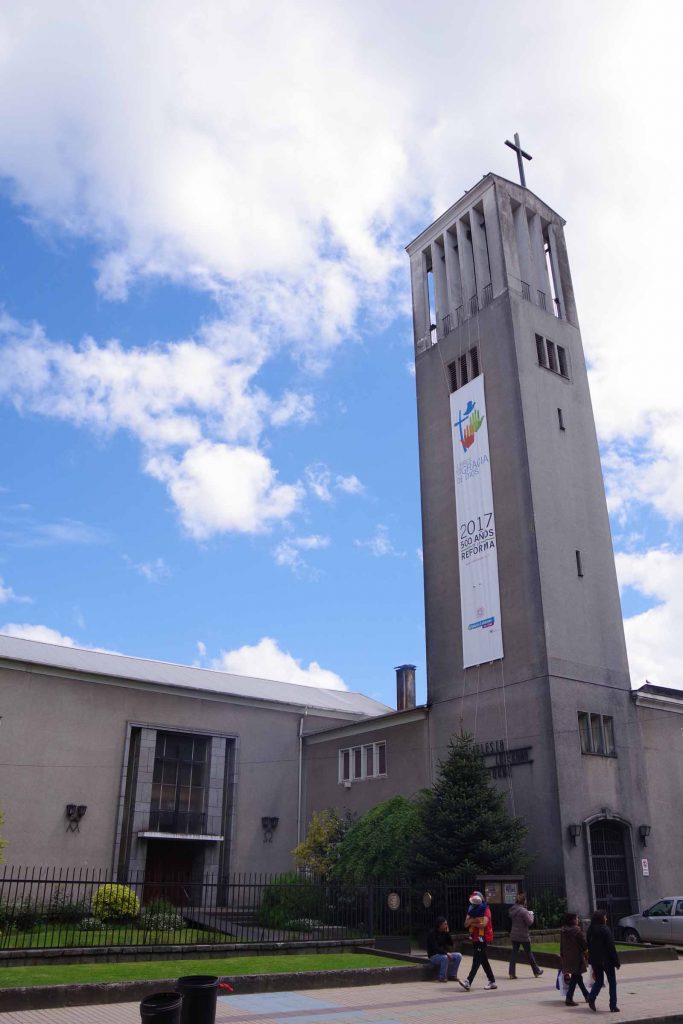 While Chile is predominantly Catholic, this church had a banner proclaiming the 500th anniversary of the reformation. 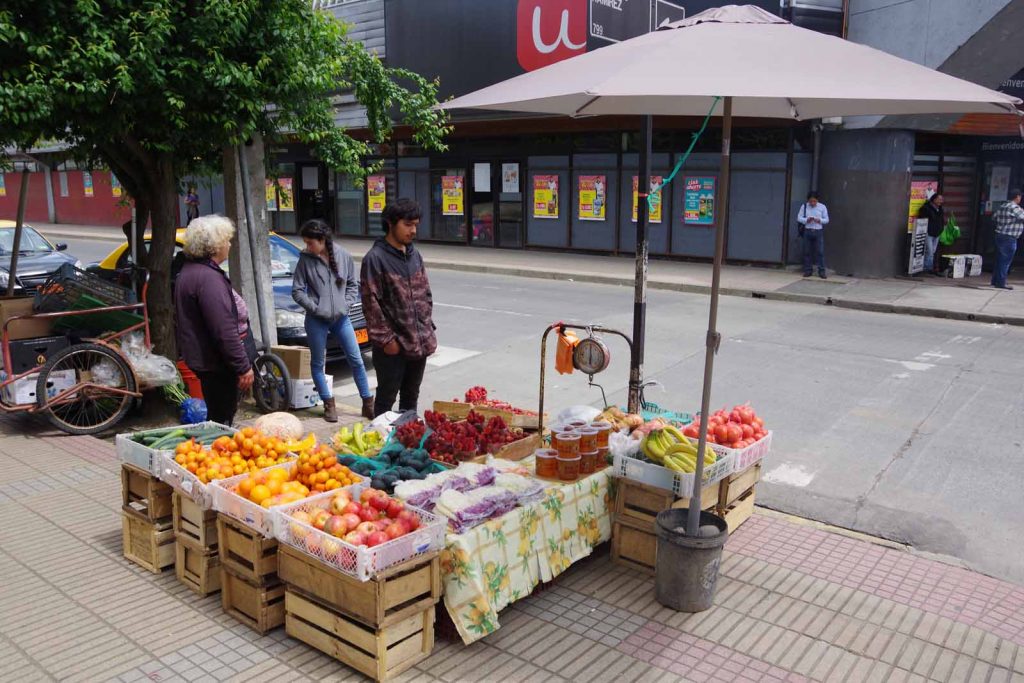 Fruits sold on the street corners. 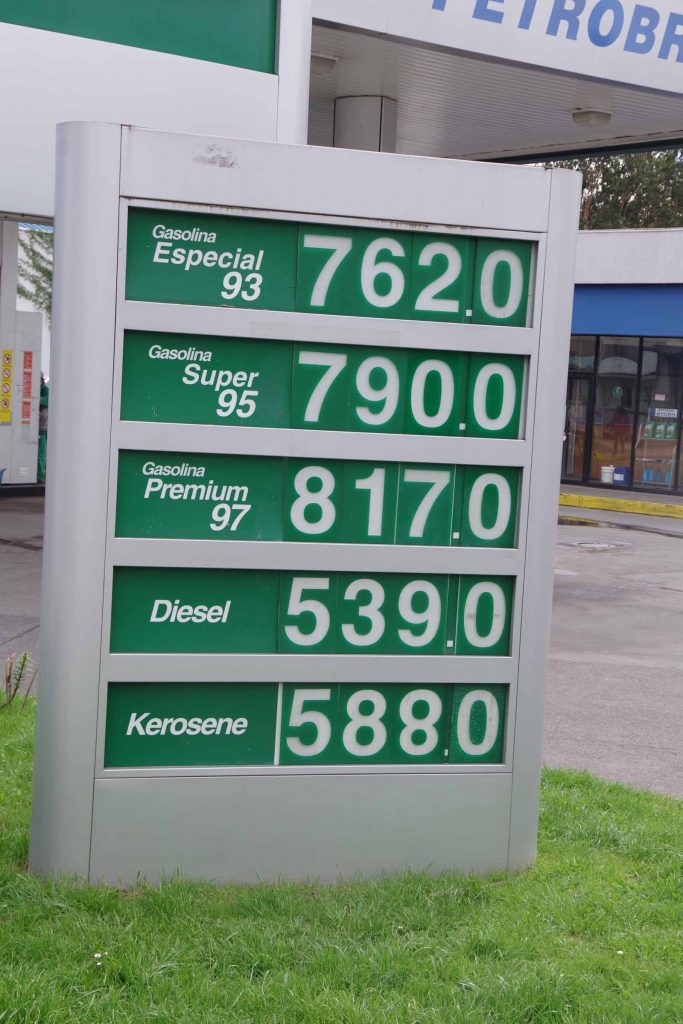 630 Chilean pesos the dollar and prices above are in liters so gasoline is more expensive than in the USA.

Otherwise nice to get to the larger town and walk around the area.