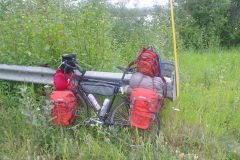 On the road again after fixing the bike. New derailleur worked well as did the new pedals. This let me take off on Friday morning. Now I had a choice on which direction to go. Briefly considered three choices:

I was most serious about the last two and not 100% decided until last minute. In the end, I started down from Fairbanks, partially to get some reasonable travels down the road and start a track record from here.  It does mean there is a “gap” in the travels and that is just the way it will end up being. It also gives me ample time to get first to Whitehorse and then further down through British Columbia. It was nice to just get some riding in and make sure all was ok. 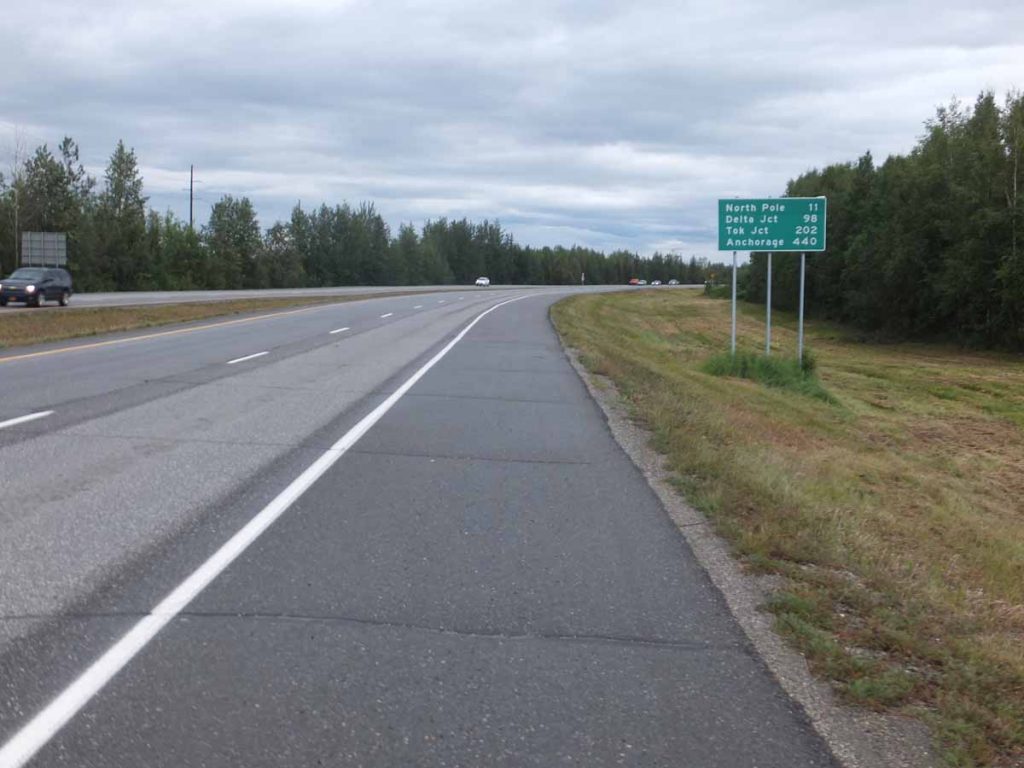 Airport Road through Fairbanks was signed “no bicycles” so took the frontage roads for ~5 miles before reaching the main intersection of Steese Highway and Richardson Highway. For the next 25 miles the road was a four lane divided highway with reasonable shoulders. 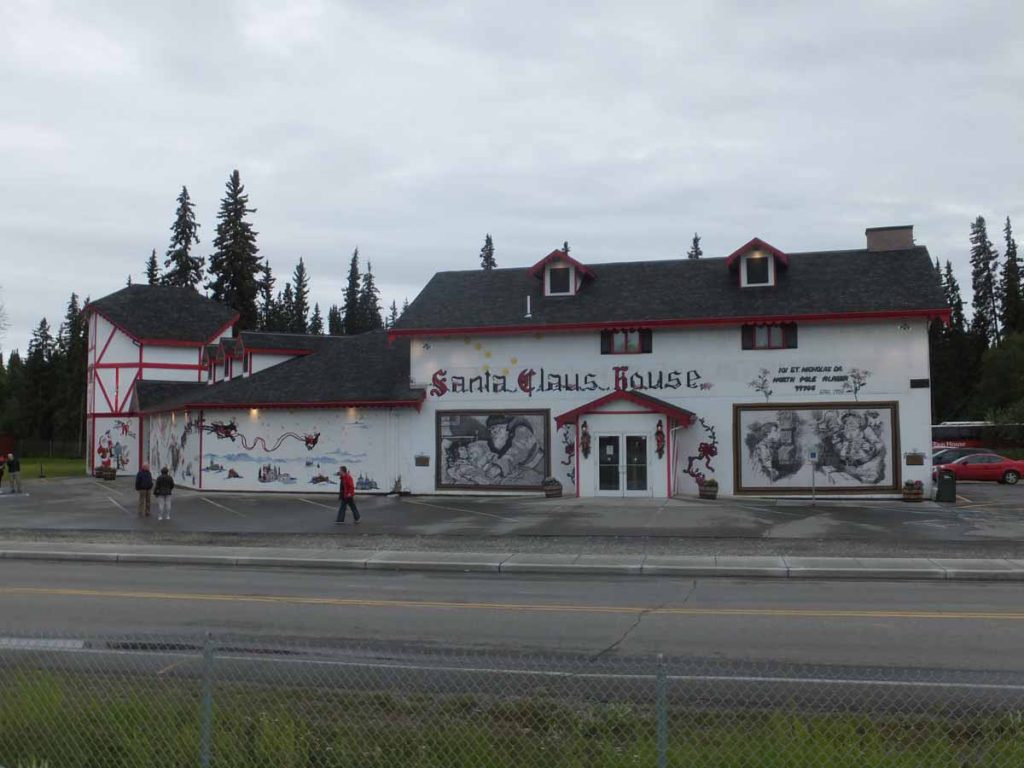 I stopped at mile 13 in North Pole for a bite to eat. This was also site of the “Santa’s workshop” shown above, though I didn’t stop there. At 25 miles the route took me past Eieleson Air Force Base including past a very long runway. There were signs about “No stopping, no standing, no photographs” for the highway traffic.

The weather had been on verge of raining and rained a little more when I stopped at Salcha Store at mile 30+. A woman with pickup looked at my bike, shook her head and suggested in this rain I’d be better off putting the bike in back of the pickup. I thanked her for her concern and pedaled along. 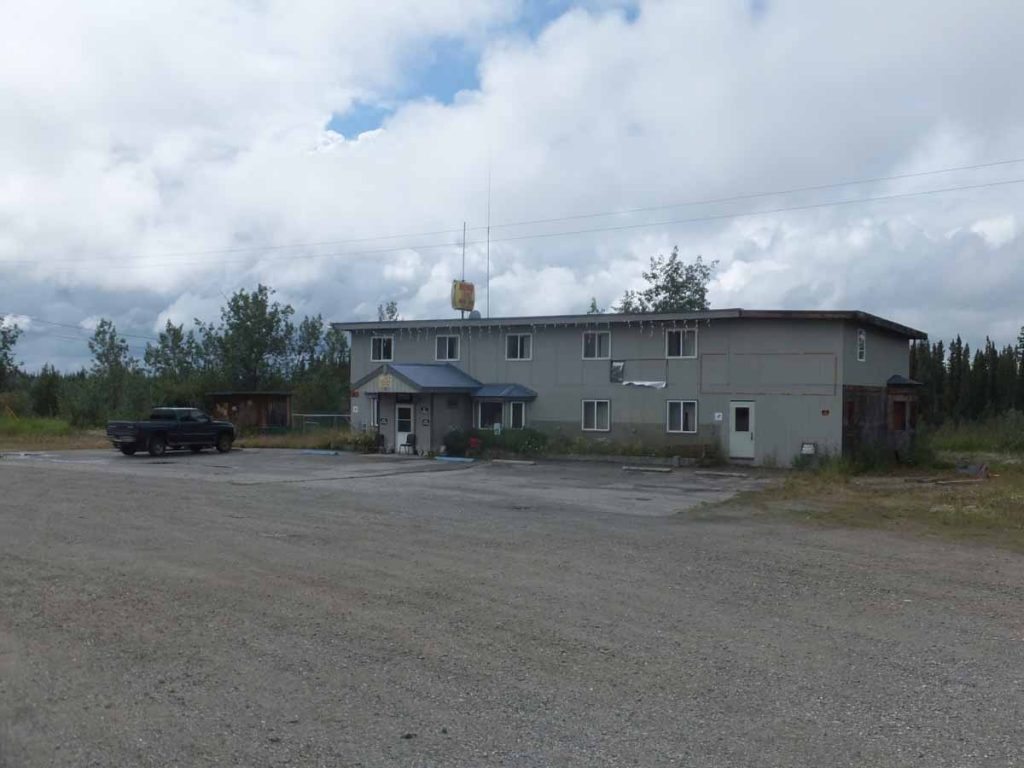 Overall the route was fairly flat on first day and it wasn’t very late as I came past the C Lazy Moose RV park. Just past that was the “Midway Lodge”. I had stayed at the Midway on my trip down the Alaska Highway in 1997. It now looked a bit run down and was no longer an operating commercial establishment. Hence, circled back to the Lazy Moose which had a tent site and also boasted of showers. An early end to a not particularly difficult day, but wanted to just get some riding in with load. We got another good downpour in the evening. 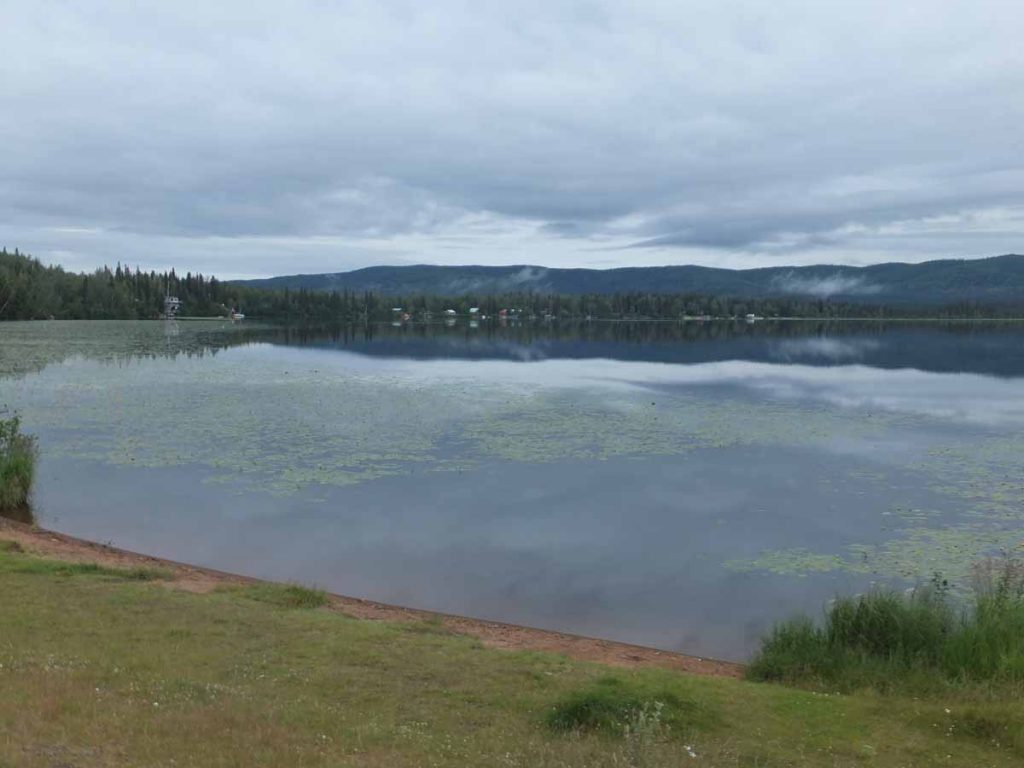 Saturday morning and back on the road early. The second day had several longer hills and also had some good showers as well. Nine miles in I stopped at Birch Lake shown above. Multiple vacation homes in this area, but still quiet on the lake. 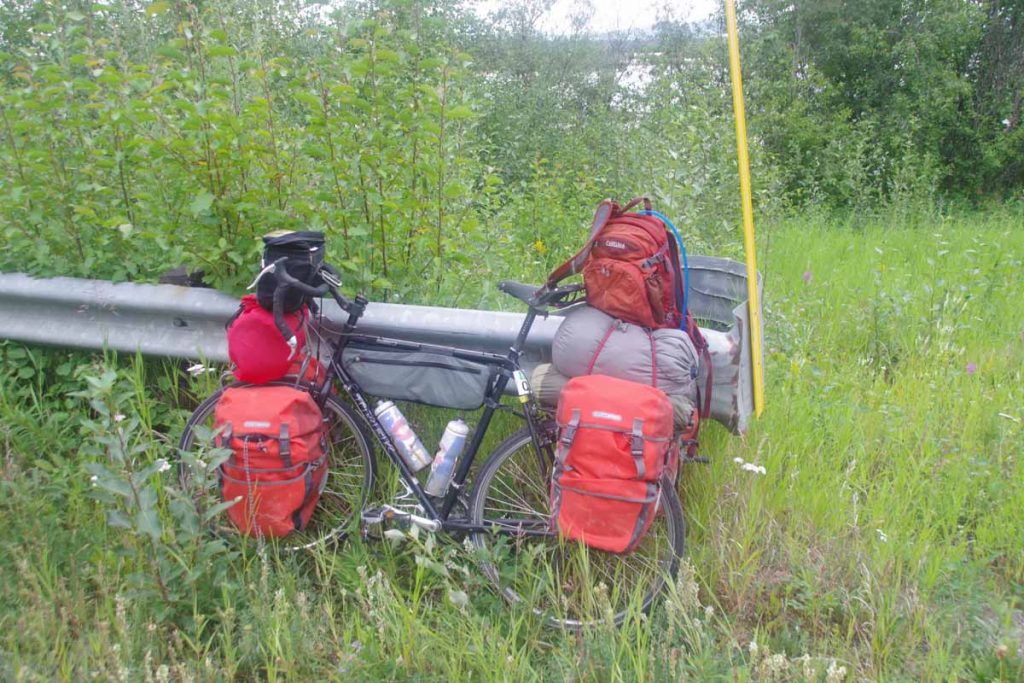 Photo above taken at a rest stop at mile marker 298 shortly before a climb over Tenderfoot Hill. You can see the red duffel that surrounds a bear canister on the front pannier. I’ve got my food in that canister and now instead of as food pannier, have a laptop and odds and ends pannier. By now everything has its place.

Tenderfoot Hill was approximately a mile and a half of climb. By the time I reached the top, the rain was coming down hard so put all my covers over camelbak, front handlebar bag as well as my jacket. A few miles of descent and after that the rain subsided. The last miles into Delta Junction were relatively flat. I had seen a sign for a “Tesoro Gas Station” at 40 mile point and was looking forward to stopping there for bite to eat.

I crossed large bridge over the Tanana River and saw the gas station. Unfortunately, it was only a gas station and no other establishment. There was a closed lodge next door. 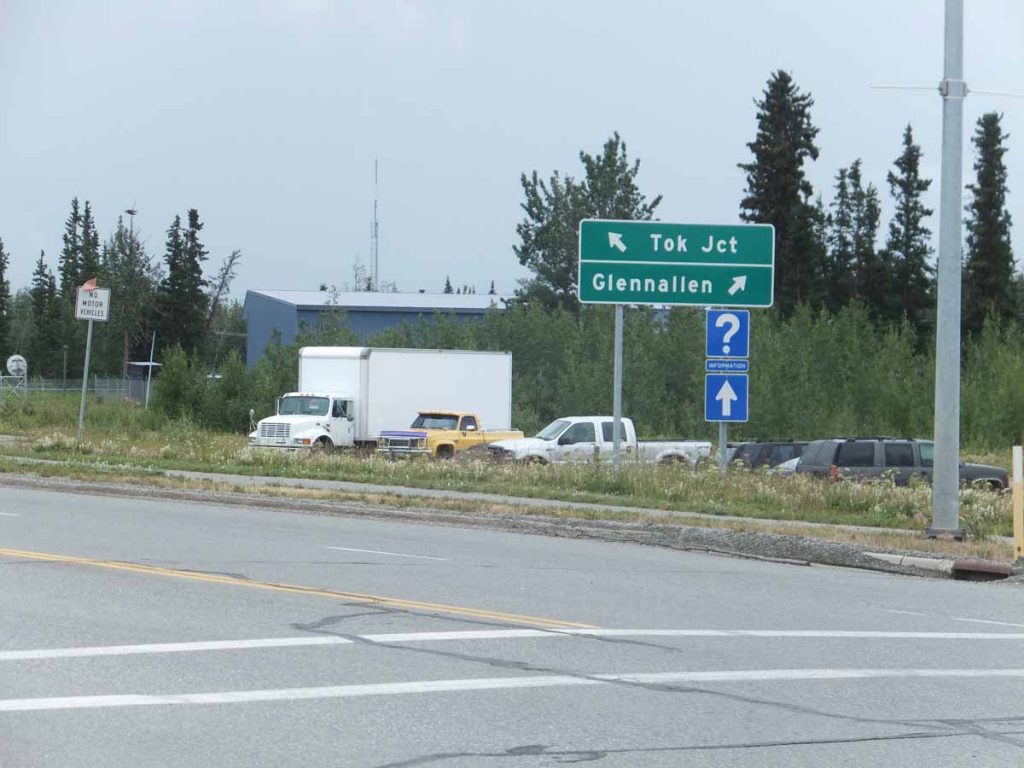 So I cycled the last little bit until I came to the road junction that marks center of Delta Junction and found a motel nearby. Overall two fairly easy days of riding, though also somewhat wet. Nice to get some real road riding in from here. 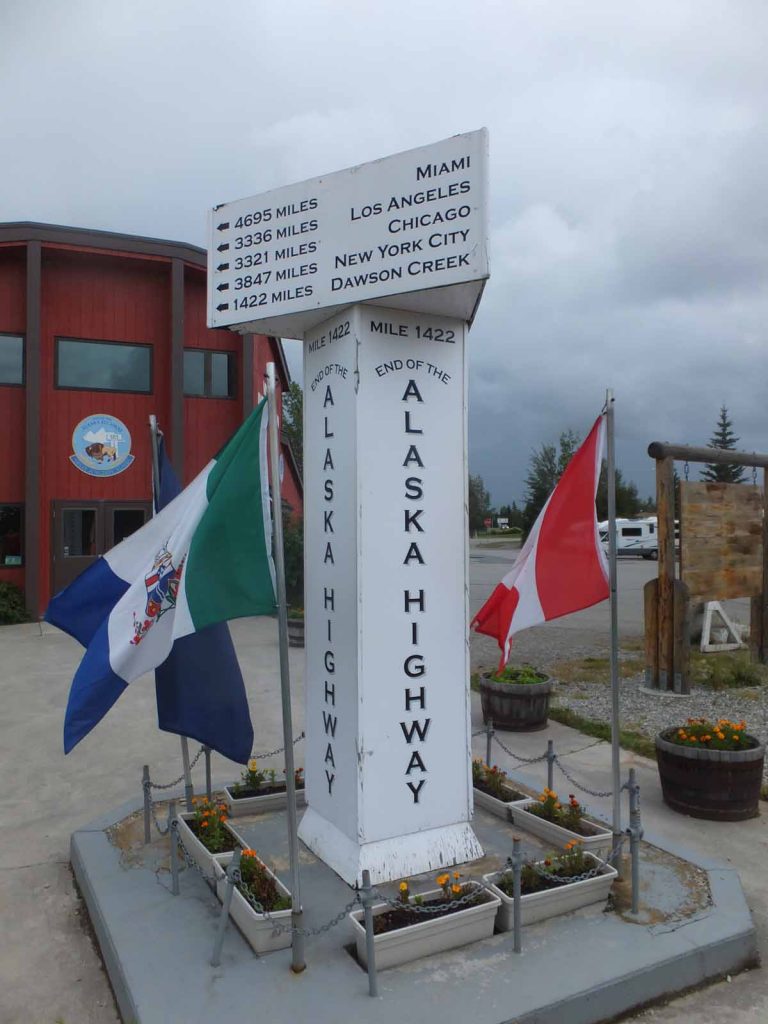 This spot is also the end of the Alaska Highway (or more precisely the northern start for me). Stopped in at the visitor center where they raved about the “drive in” that was just a little further south. 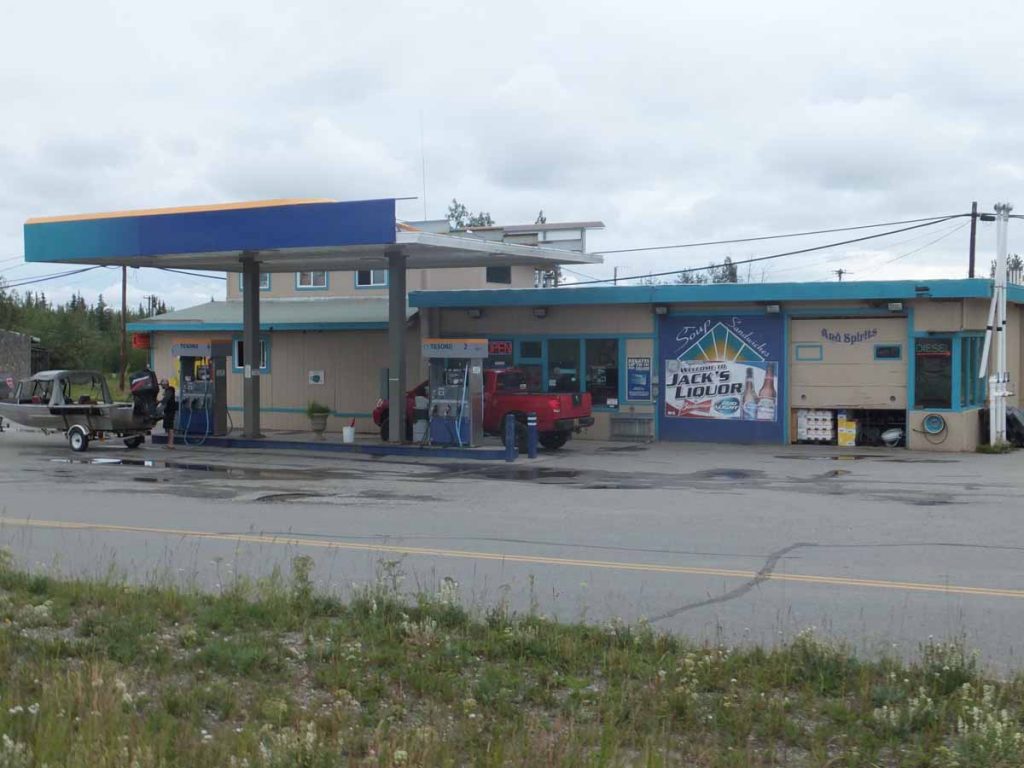 I walked that way and saw the sign “drive through” and went inside. Asked if there was a place to eat and they cleared some spot. Overall they had some frozen items in a case and a microwave. It didn’t seem as exciting as people had reported. 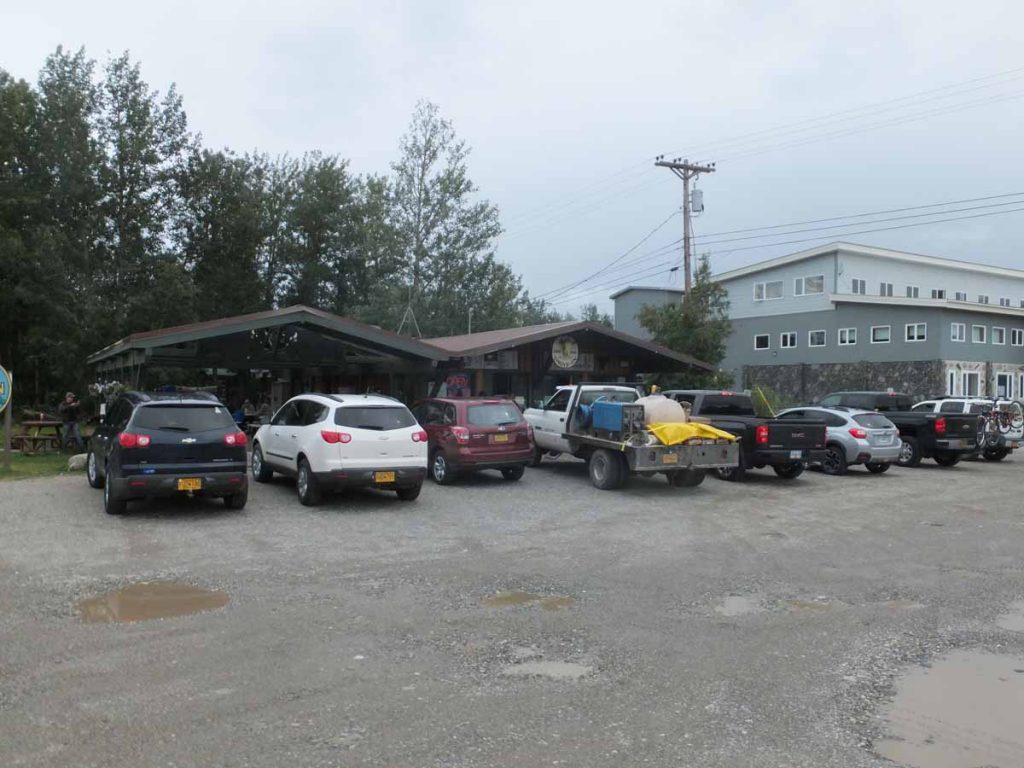 However, once I walked a little further south, I found the original intended location: the Buffalo Drive in – not the drive through Liquor Store with convenience foods I had found first Once I cleared that up, I agree it was a better meal for this little town.