↓
Home→USA→Alaska→Tok, starting down the Alaska Highway 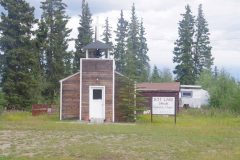 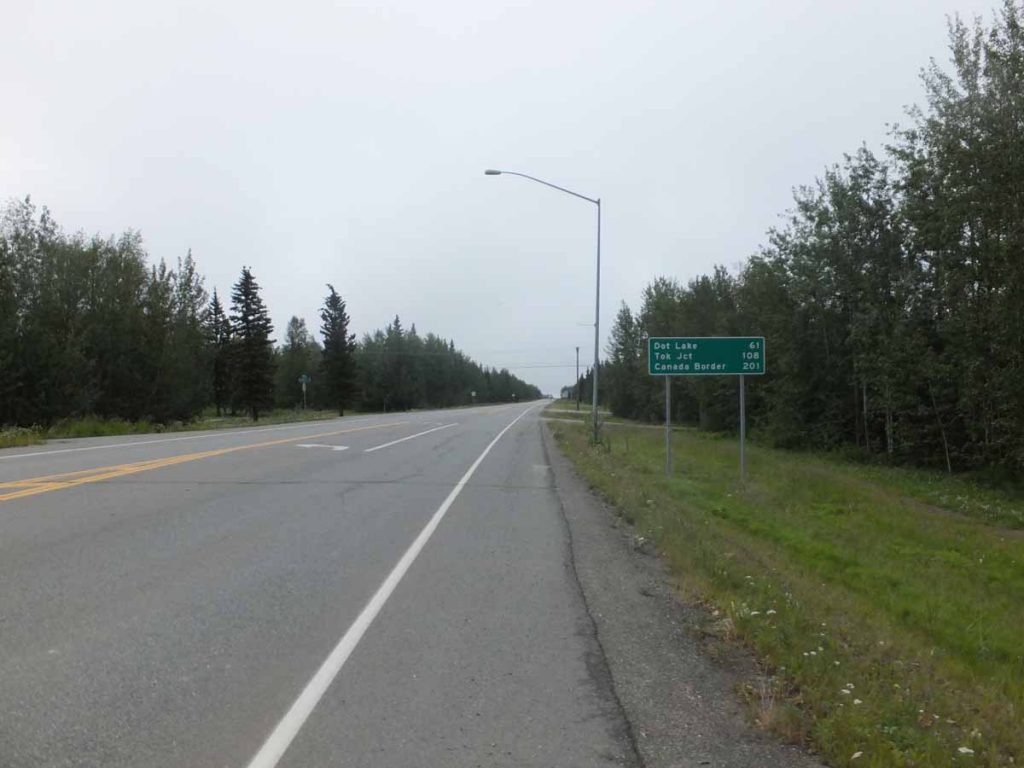 Theme for last two days has been “riding to Tok”. It was nice and restful in the motel but particularly appreciate ability to pull the blinds and get some dark. I didn’t get on the road until 7am. I cycled to the road junction and sign above gives the basic overview: 108 miles to Tok with an intermediate point at Dot Lake. Hence, the general idea was to get to Dot Lake the first day and then ride into Tok the next.

The road was flat, smooth with a very gentle incline. I saw a moose crossing the road in far distance but not close enough to get a good shot. Otherwise not extremely scenic as the clouds obscured the Alaska Range and otherwise was a flat road through the forest. 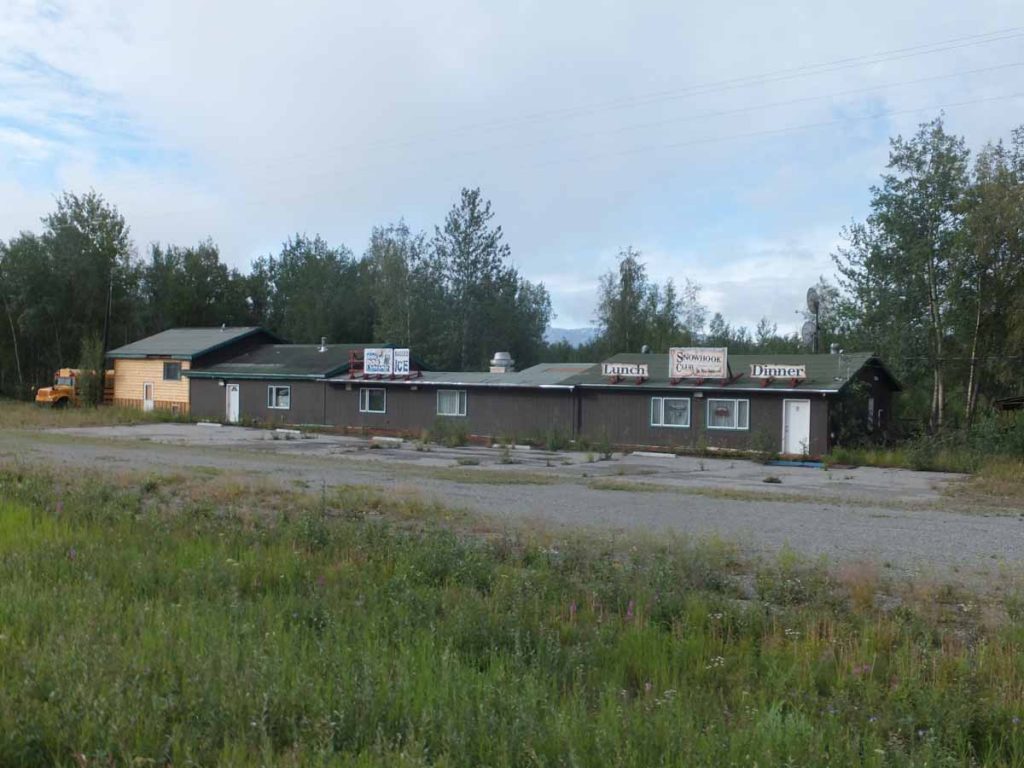 Ten miles out, I came past the establishment at photo at right. During my last trip in 1997, it was named “Cherokee Lodge” and I had stayed overnight. Several of the places I stayed before no longer have lodging. I get the sense the largest population passes through with RVs and others might stay in other places, hence some of the older lodges have gone to other uses.

It is interesting comparing notes with my trip from 1997 as can tell that I’m not quite a strong in cycling as I was 19 years ago. Some is probably also myself and bicycle are a little heavier than on that trip. However, still gives me some interesting comparison points.

At 18 miles was another spot indicated “Silver Fox Gas and Snacks”. Again, didn’t look like much to stop since the pumps were automatic and the associated store really wasn’t open. Still useful to keep in mind as hard to tell in “The Milepost” how many of these establishments are actually places to stop. 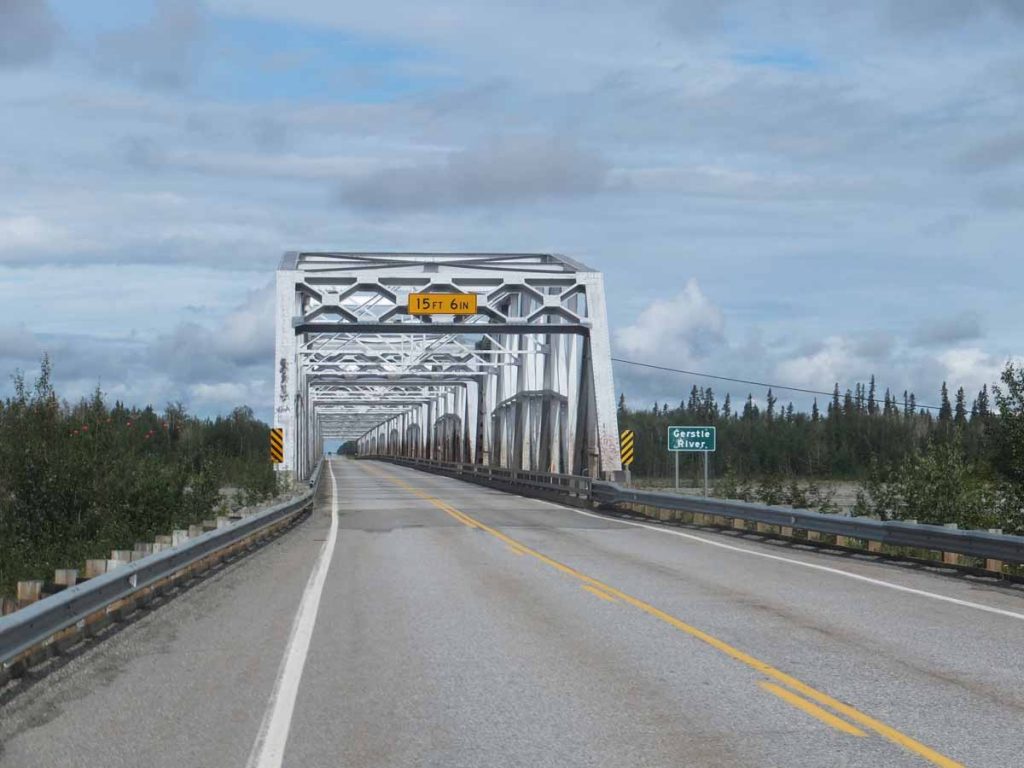 The road crossed the Gerstle River near mile 25. An impressive bridge shown above. What I was at least as surprised about was the river channel was rather large with a braided river going down. There was plenty of sediment and the channel could wind back and forth. This would make it more difficult to filter water since filter would quickly get clogged. Fortunately, I had plenty of water otherwise. In general, I tried to camp close to streams so I could fetch/filter some extra water. North of Fairbanks there was water everywhere and not much difficulty. Since then, one pays more attention to the little streams for water quality. 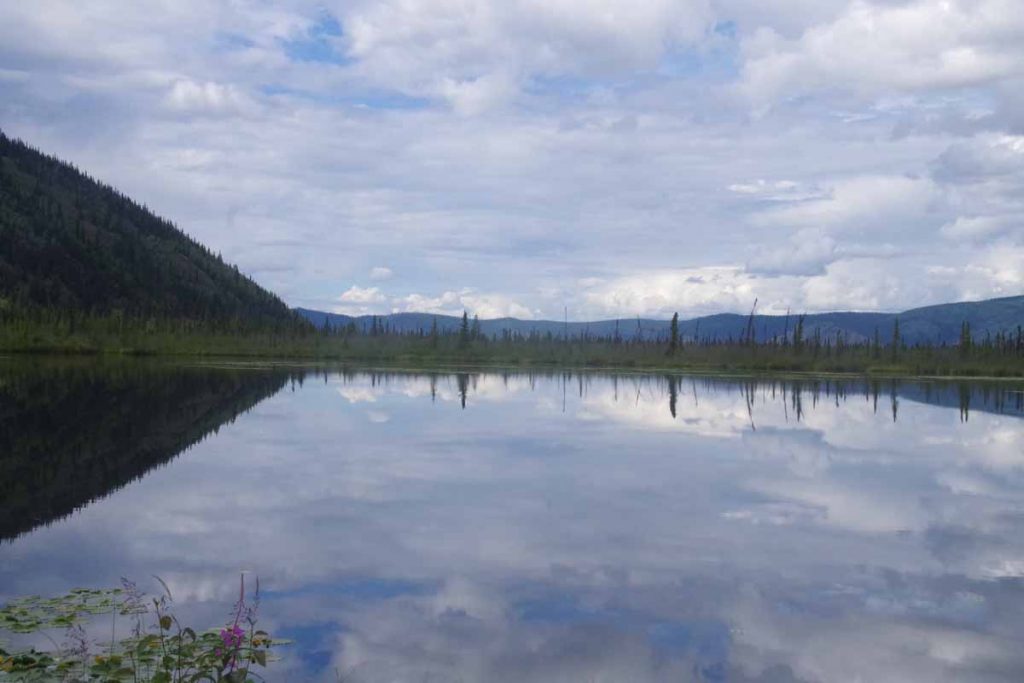 After Gerstle River some more ups and downs. Also the road seemed to have more deep cracks. Thump, thump. I cycled in the lane (and then checked my mirrow to get out before traffic), but still some jarring thumps. Also had a brief shower before reaching Dot Lake just around 2pm. Overall a nice and not too difficult ride. 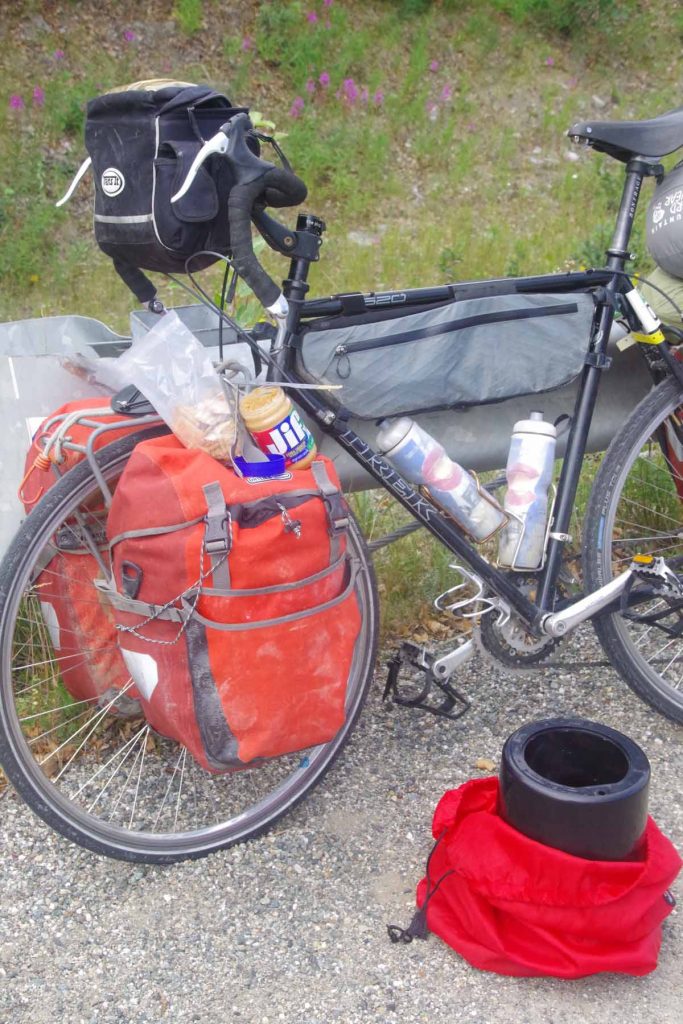 Photo above was my lunch stop. Leaned the bike against a bridge support. Unloaded the bear proof container in black and got out the crackers and peanut butter. 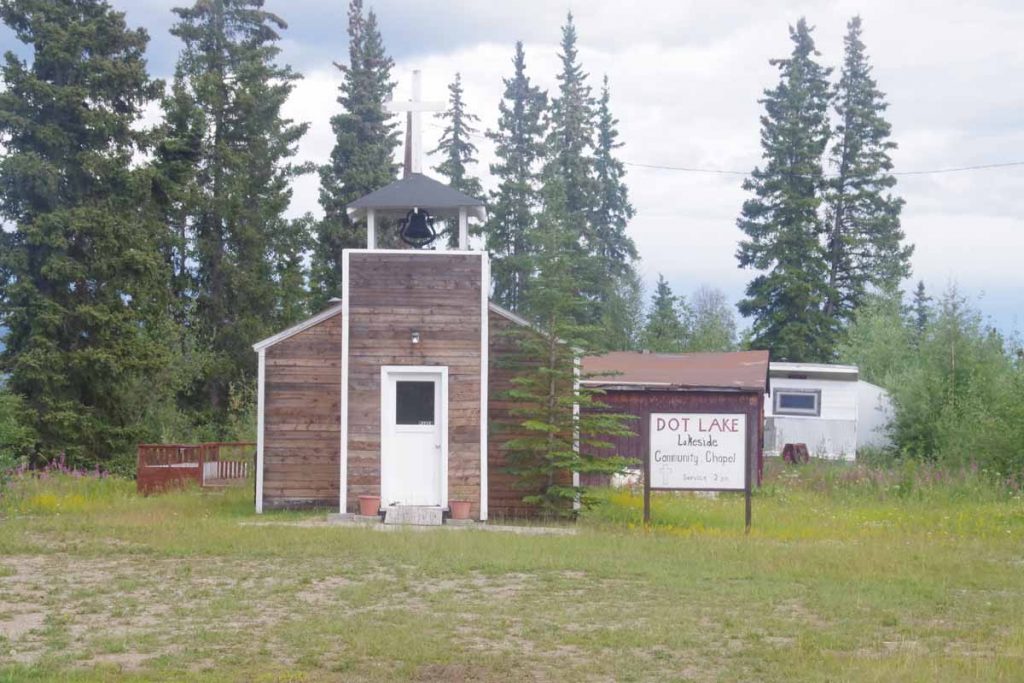 Services had just started so I went into the church. There were five pews and total of seven adults and three children. Initially they seemed to mostly work through different hymns, some by request. At some point realized the pastor had been called away on a semi-emergency and he came back in the middle. He gave brief remarks about Psalm 15 and then otherwise prayer requests and things people were thankful for. Overall a nice service and fun to catch it in the act, particularly in this small church. 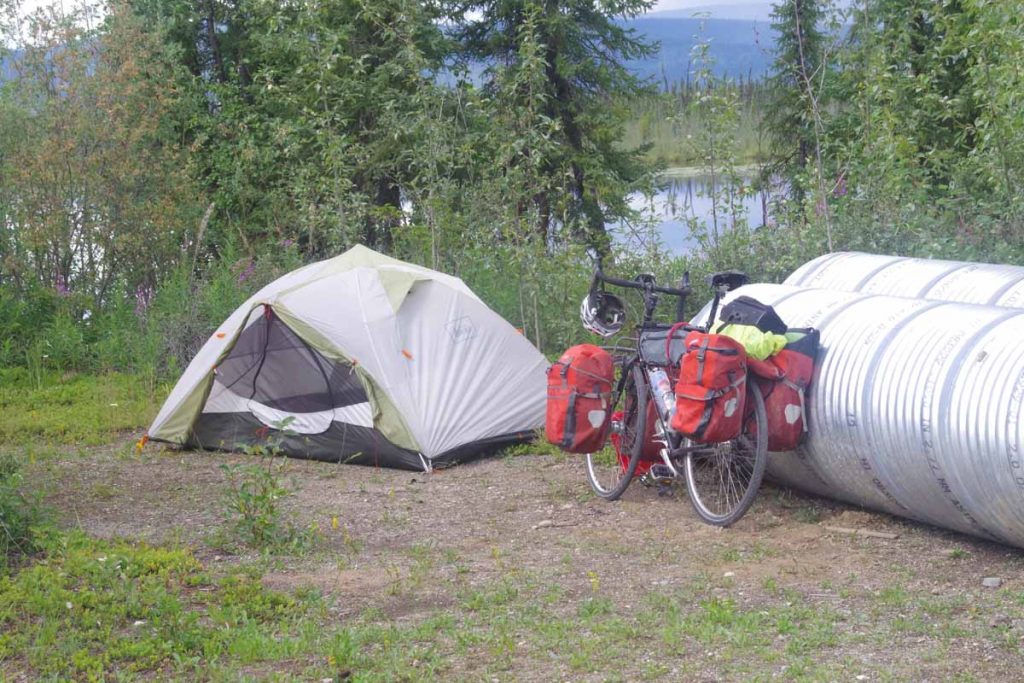 After service, I asked if it would be OK to camp by the lake. No problem, so I set up my tent not too far from some construction piping. There was a 13-mile segment of road construction around Dot Lake, but fortunately other than some gravel patches nothing too bad.

It rained overnight but at least clear in the morning. It was light overnight and in the morning I had a good chorus of howling dogs My guess is these are the winter sled dog teams. I walked briefly to the post office (closed) and otherwise saw the school in town. Not too much else to describe this town.

Next morning, 4th of July I was on the road not too late. I cycled the remainder of the construction. Again some gentle rolling hills today but nothing too severe. 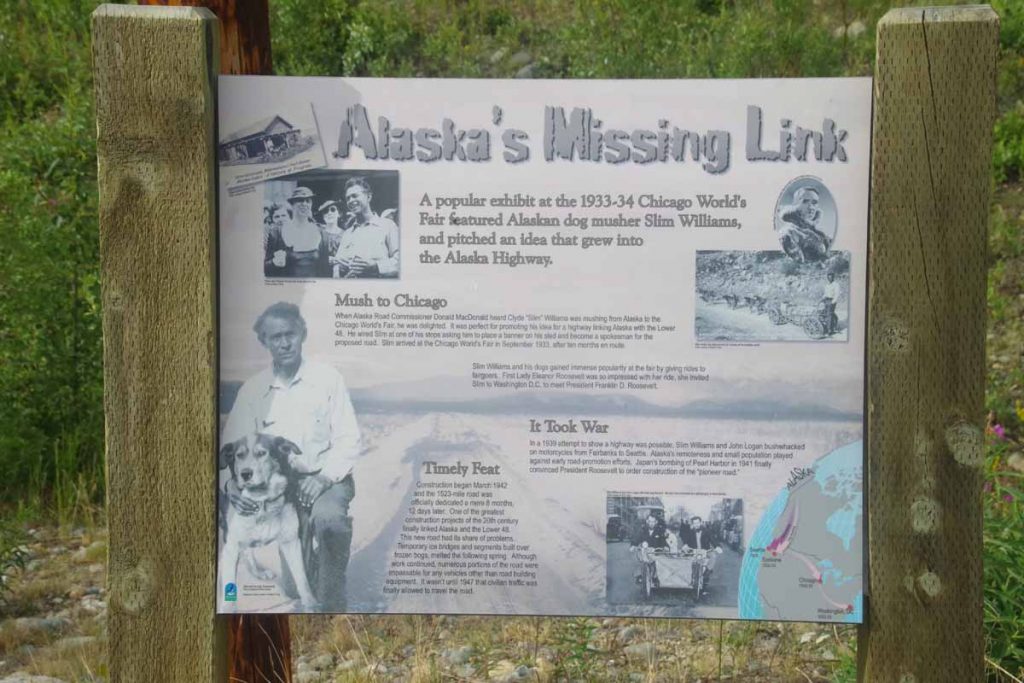 There was a nice rest area 17 miles in with a good set of displays including this one describing early promotion efforts at the Alaska Highway. While it had been promoted for a while, the second world war was impetus to quickly build the highway (in something like 10 months), though it wasn’t until 1947 that it was open for civilian travel. Since then it has been paved and greatly improved. 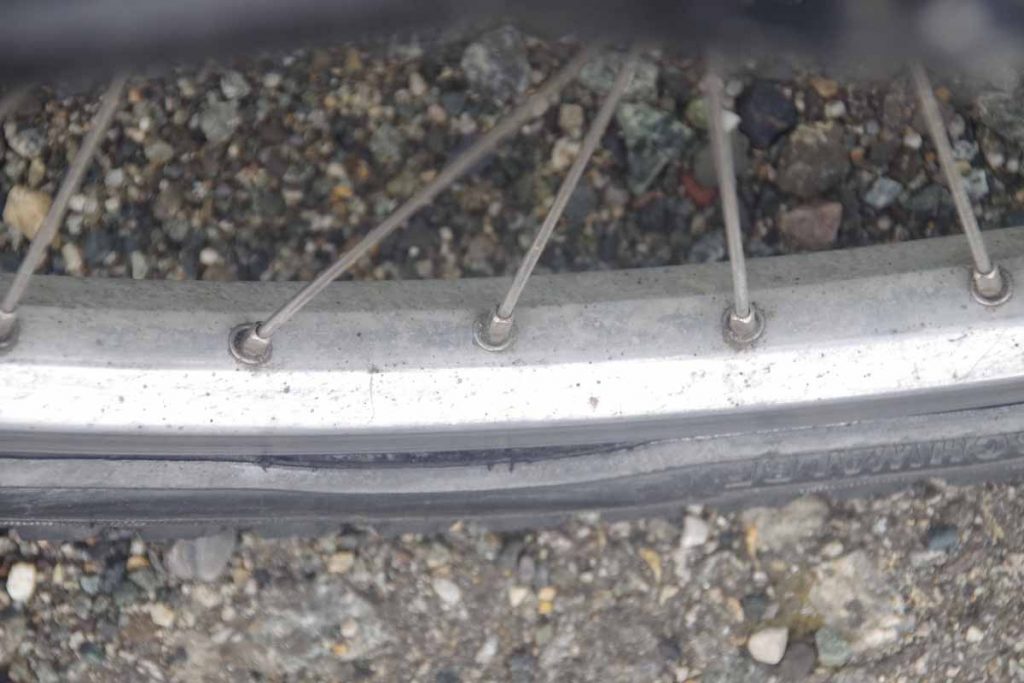 As I was riding, I could sense a radial asymmetry. Hence, at the rest area I took a good look and noticed that the sidewall from the tire was starting to rip. This isn’t good as at some point one goes over a particularly large bump/crack, the sidewall rips, “pow” inner tube goes out. I had two spare tires with me, one from the start and a second I had included in my Fairbanks care package. Hence, decided to swap in a brand new back tire. The one I took off might still work in an emergency, but doesn’t have a huge life left. Nice riding after that, though the bike definitely feels a bit sluggish. 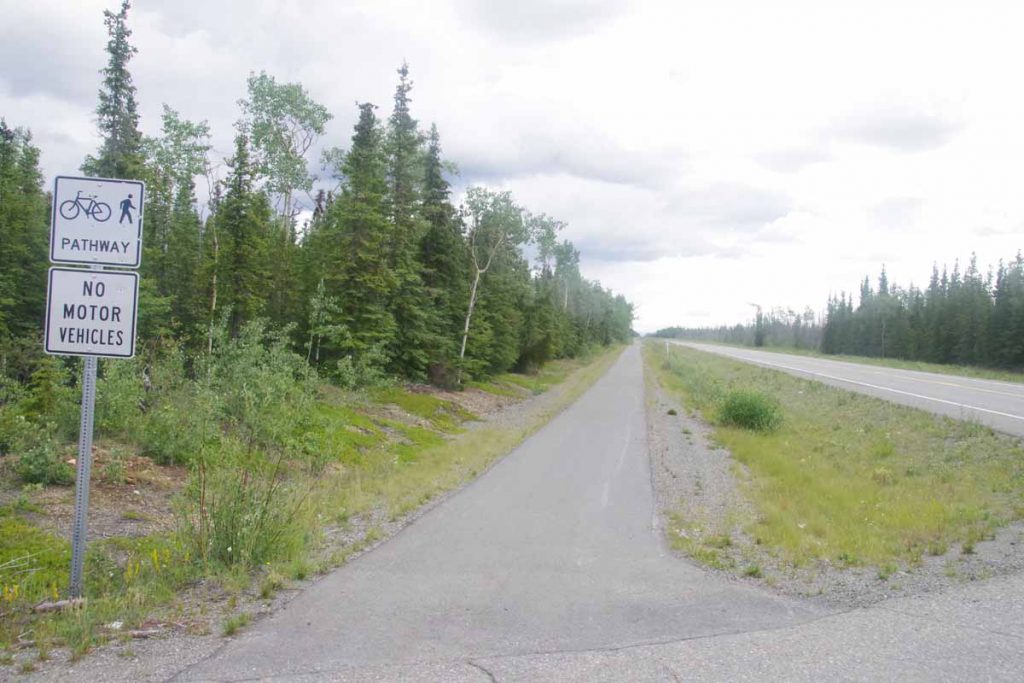 At 11 miles from Tok, this bike path appeared on side of the road. It was also pretty level. Hence, cycled the last 11 miles on this nice path. Overall, Tok was pretty quiet for 4th of July. Some festivities down the road, though didn’t find them. I did find the grocery store which was fortunately open and chance to get some lunch. One of two restaurants is open and will find it for dinner this evening.

Overall, two not extremely difficult days but some good riding as I started the Alaska Highway. I’ve had intermittent showers both days but at least not a deluge. Now also time to check the map and figure out how to go along the next several days ahead.