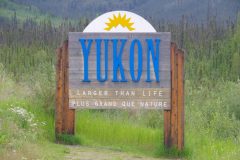 The road from Tok to Beaver Creek looked like a good two day ride of 113 miles. It would bring me across the Canadian border. There was settlement of Northway Junction at 50 miles so ideally find a spot just a bit further. 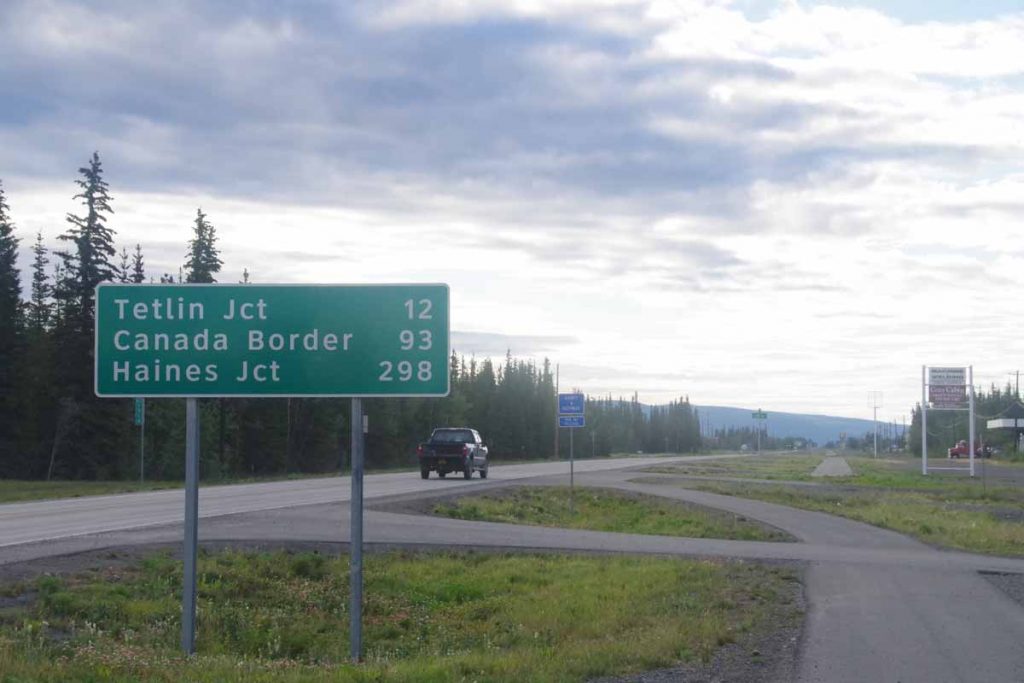 The road started out both smooth and flat for the first 10 miles. My bicycle was gliding better now that I figured out that the rear wheel hadn’t been mounted 100% centered. At 10 miles was the broad expanse of the Tanana River. I had been roughly following this river last few days and this was the last crossing. It was a wide bridge with good shoulder but there were also signed nearby of earlier bridges. 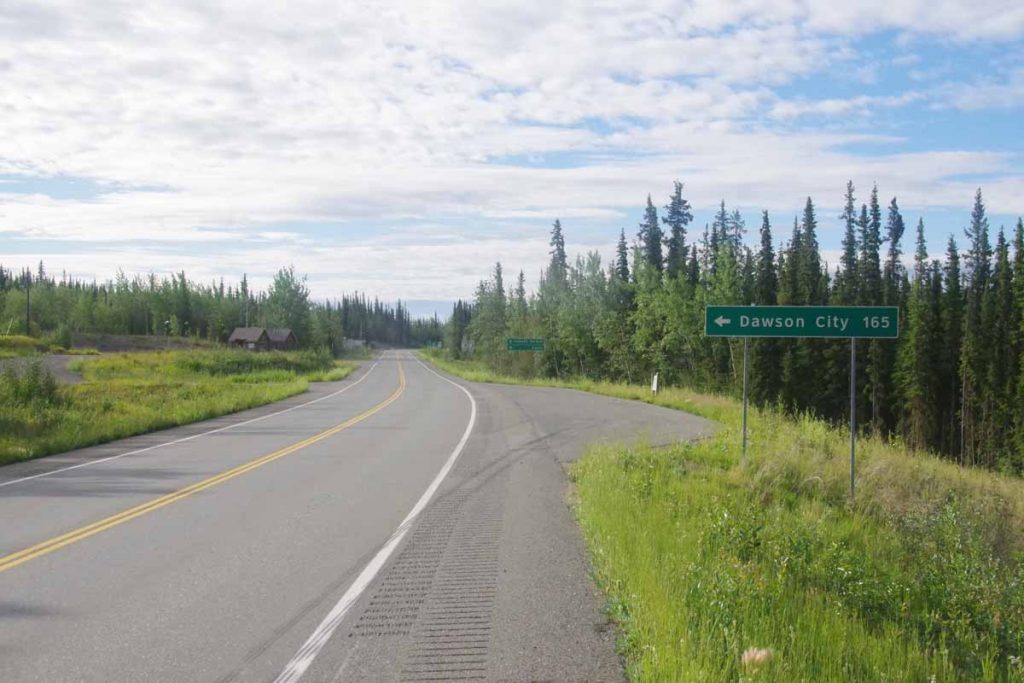 At 12 miles a road junction pointed to the Taylor Highway with roads to both Eagle and Chicken and then long way around to Dawson City. The latter went on a reportedly rough route known as the “top of the world highway” but I figured I’d stay on the standard route. 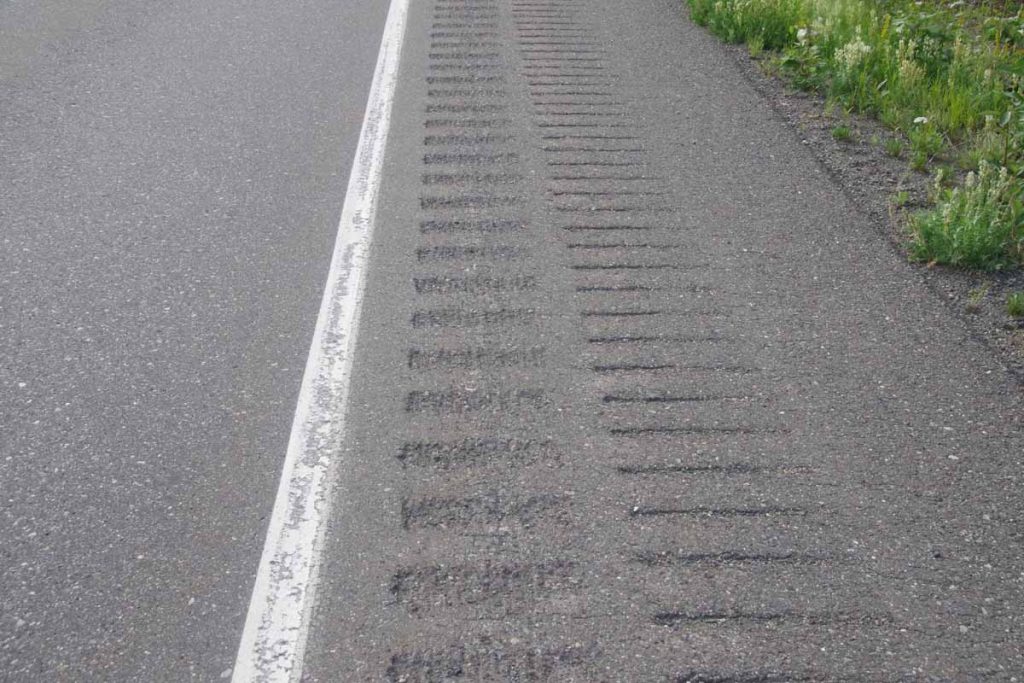 After this point the road frequently seemed to climb up along the hillside only to descend a few miles later. There were multiple iterations and it made things just slightly slower. The road was generally smooth, though occasionally a perfectly reasonable shoulder got messed up with double rumble strips as shown at photo above. 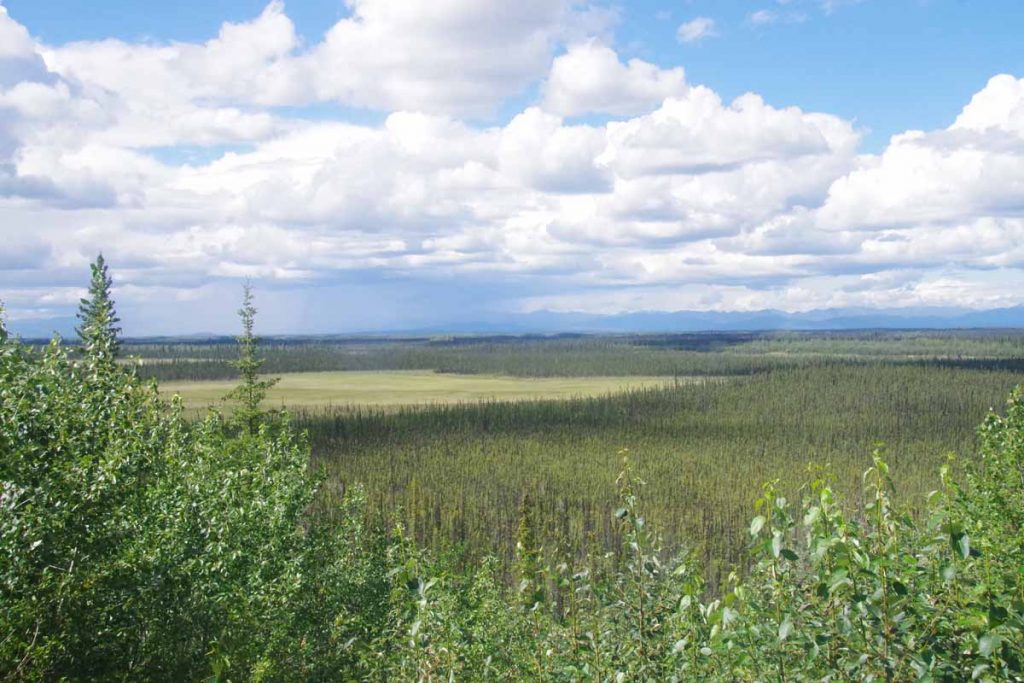 However, overall it was a beautiful ride and occasional trips along the mountain led to nice expansive views as shown above. 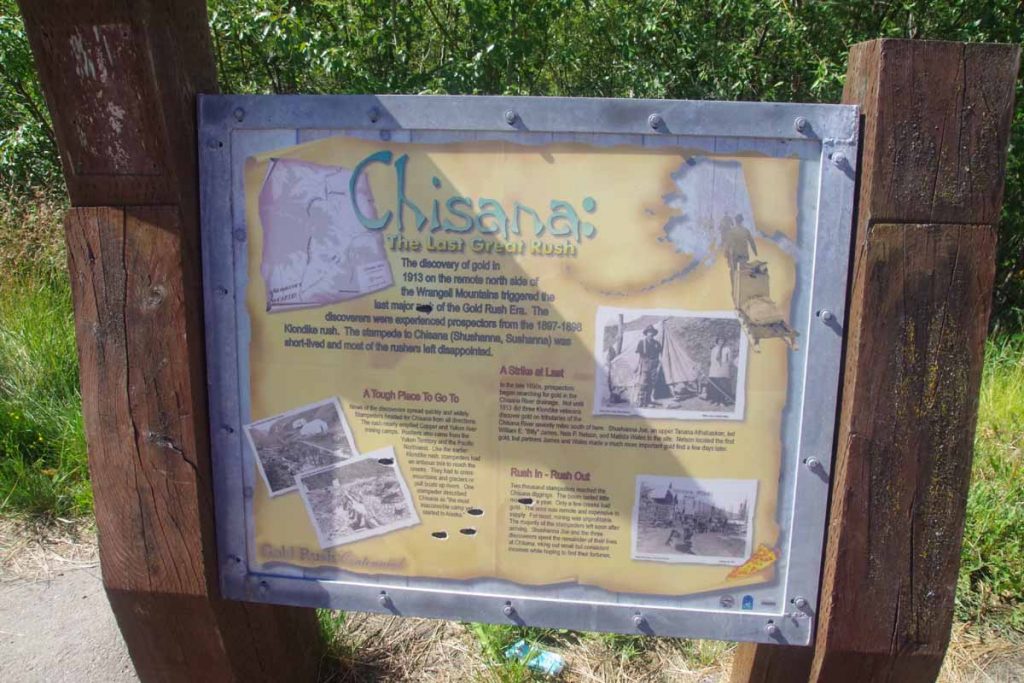 I came along several interpretive signs including this one that explained the last gold rush in 1913 in Chisana River area.
The flowers seemed to be in full bloom. Also unfortunately a few biting deer flies. I needed to pay attention while stopped because they would take just a bit to hone in, but if you didn’t get them then the bite had a sting to it. 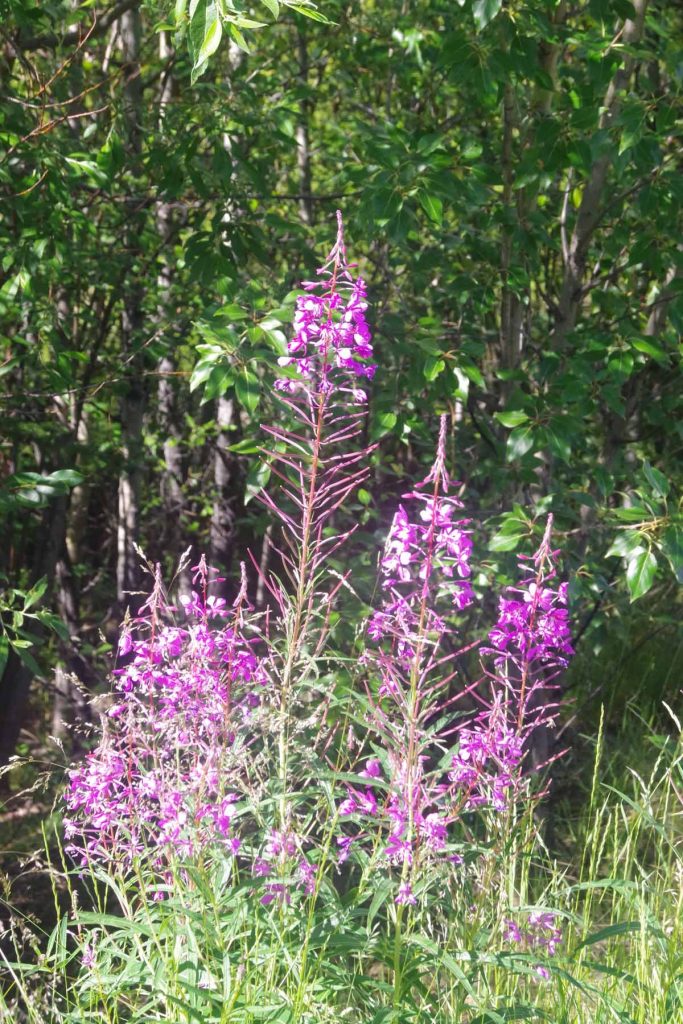 Without too much difficulty I was at the Northway Junction store a little past noon. I had done 50 miles of pretty cycling. I took an extended leisurely gas station lunch as I heated and ate several items they had for sale. It briefly rained but nothing too bad. Finally after an hour and a half, I set off another seven miles down the road to the Lakeview Campground listed in “The Milepost”.
It was a lovely campsite along the lake. They even had a bear-proof container to put your food, complete with a label that talked more about humans than about bears. Not far away as a “bird blind” that was in shade and hidden that you could sit and watch the lake as well as the birds. 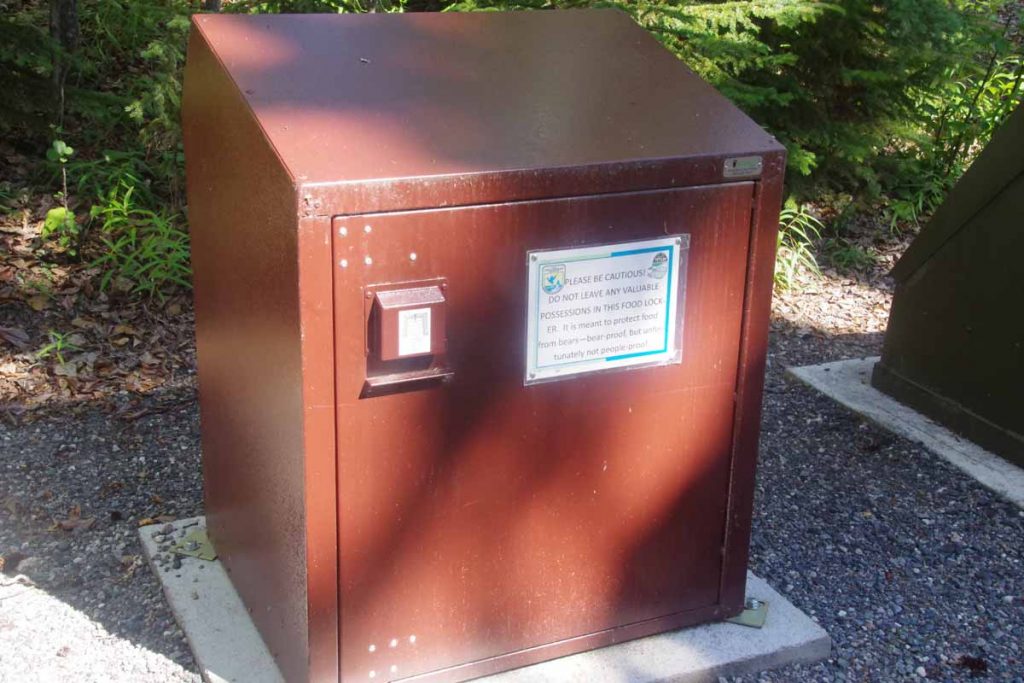 It was a nice relaxing afternoon as I set up the tent, made dinner and otherwise relaxed. Overnight we had several storms drop through some rain, but all was dry in the tent. 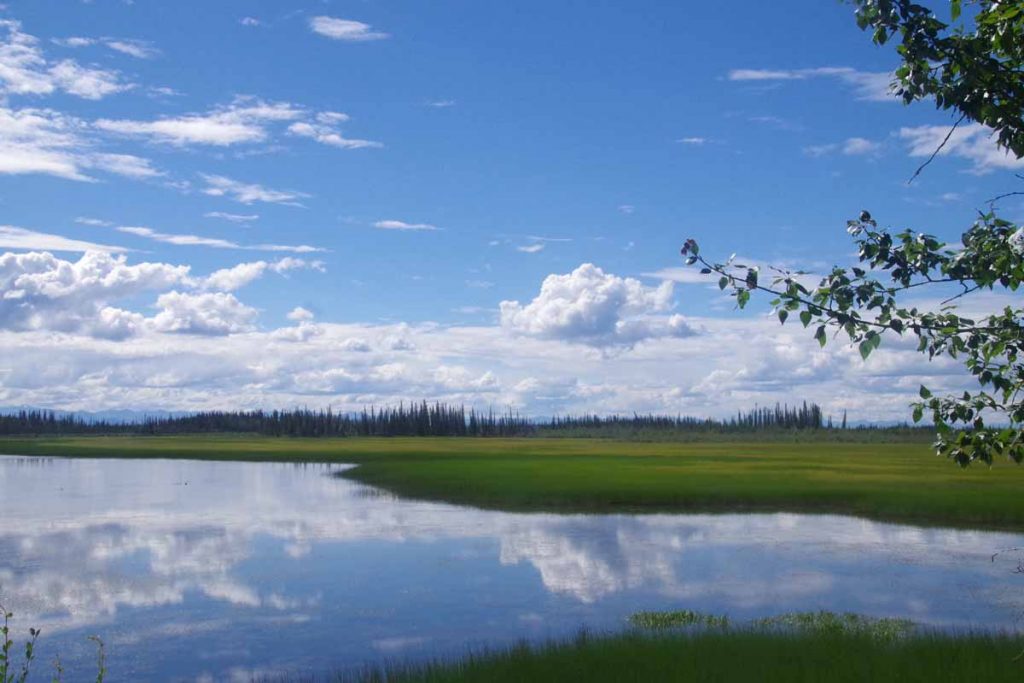 On the second day, I set off by 6:30am or so. The road continued its roller coaster hills though not quite as large as the day before. The overcast skies had fortunately cleared and it was good cycling. One intriguing thing I saw along the way were these conical segments supposedly as an experiment to see if they could help maintain permafrost and hence keep the road from settling further. 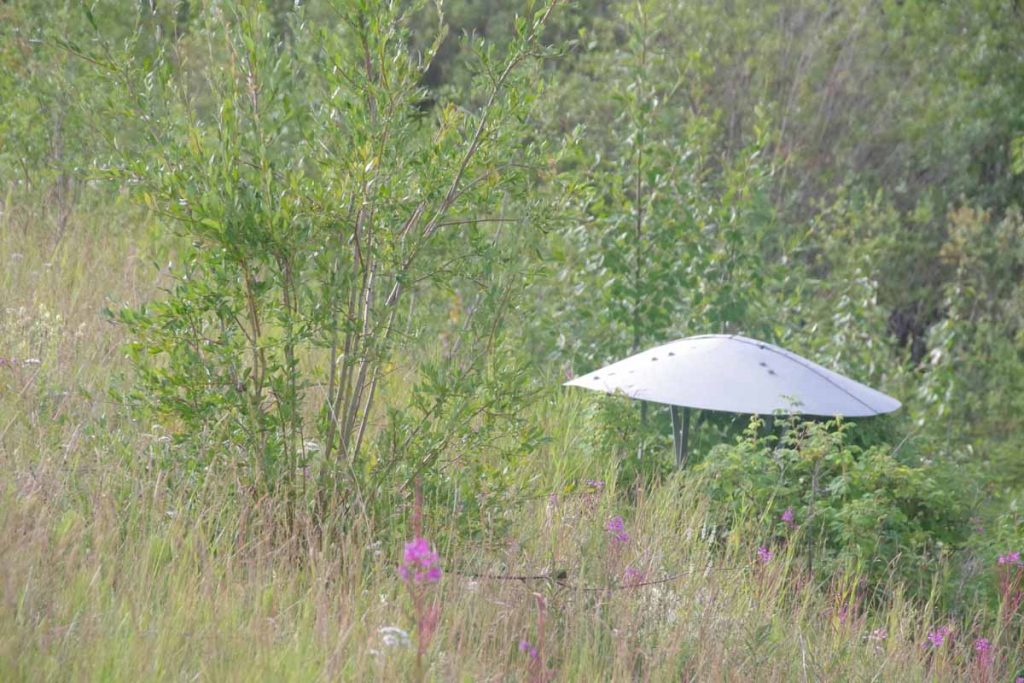 The overall theme started as “cycling to the border”. 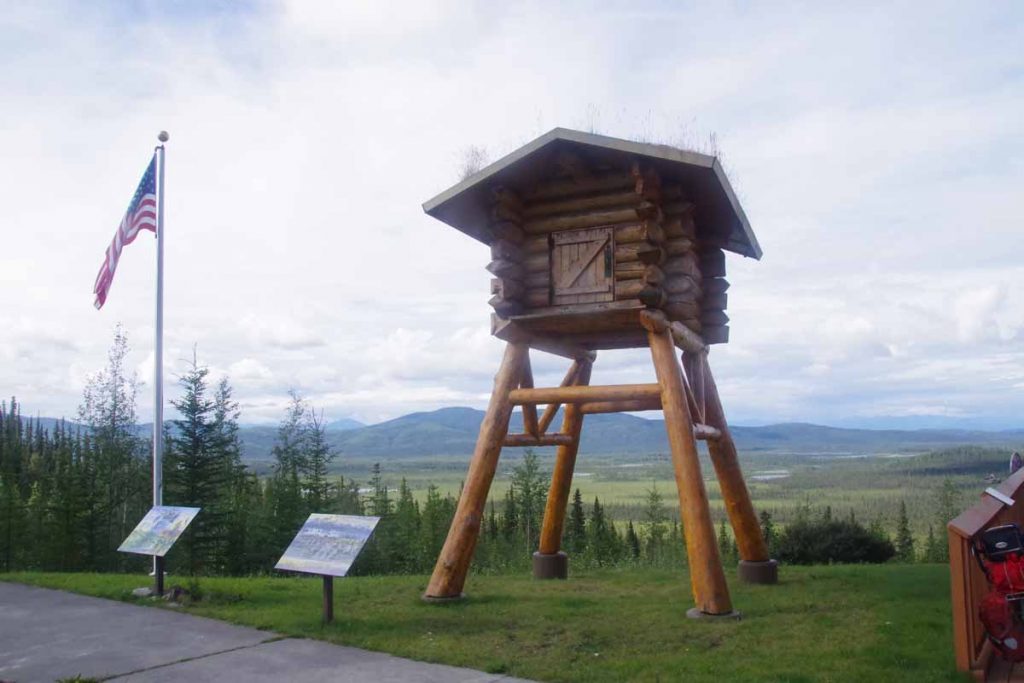 As I got close, I came past this “cache” on stilts that was part of an exhibit of the Teslin Wildlife Refuge Visitor Center. Nice visitor center here where I stopped briefly before continuing… 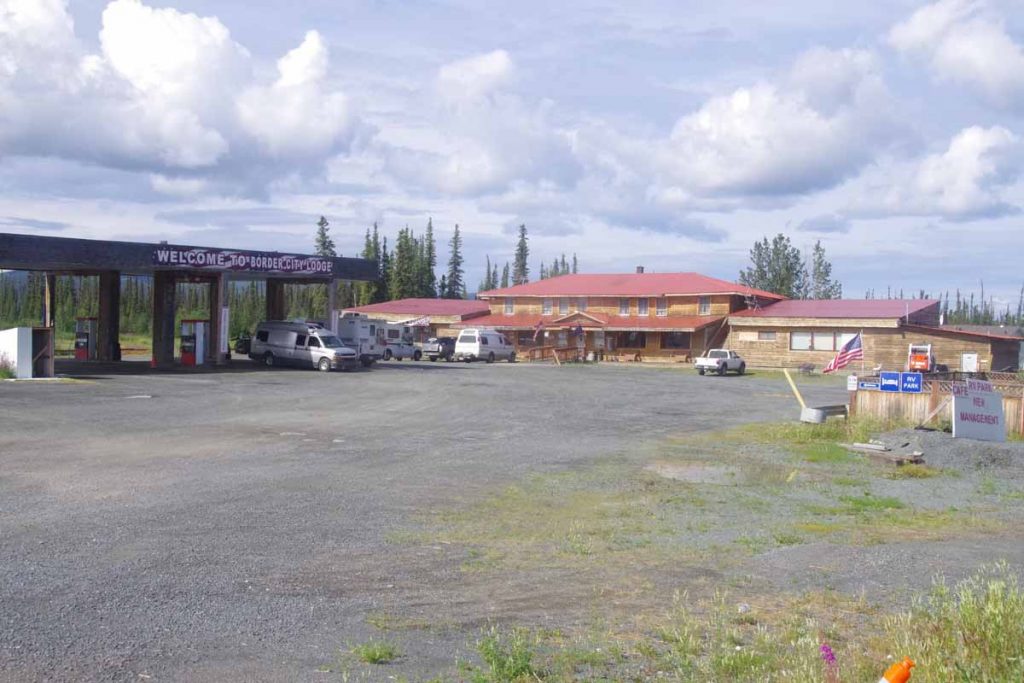 to the border city lodge. This was a larger roadhouse with motel, café and small store. Service was a bit slow, but I was able to get a cheeseburger here and refuel. After that I cycled the remaining 3.5 miles to the official border. 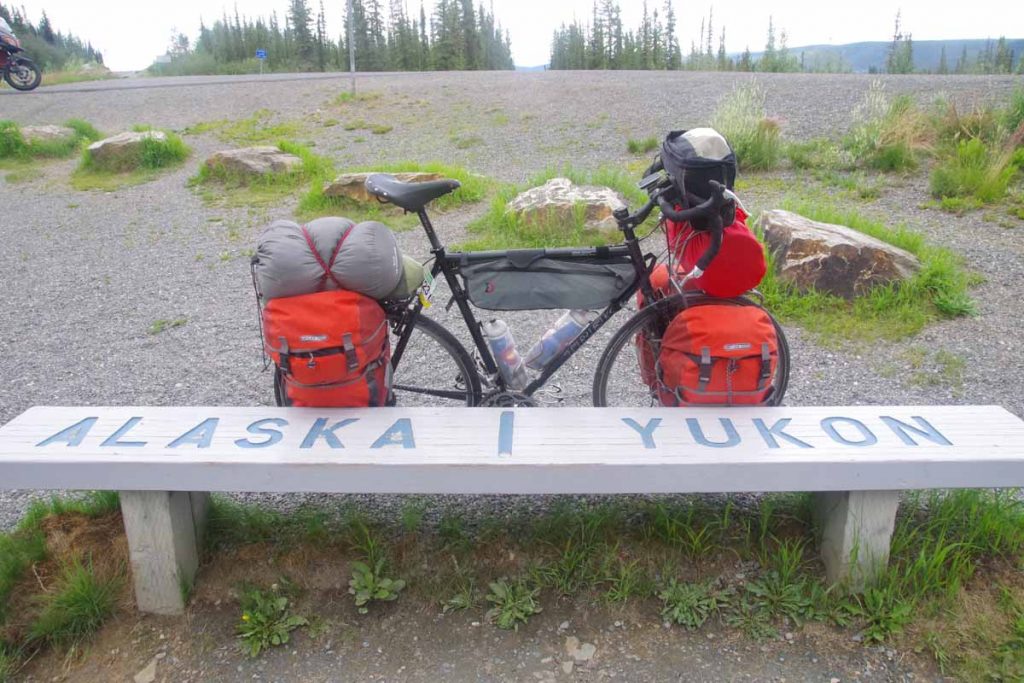 The photo above shows the bike half in Alaska and the front half already in the Yukon. 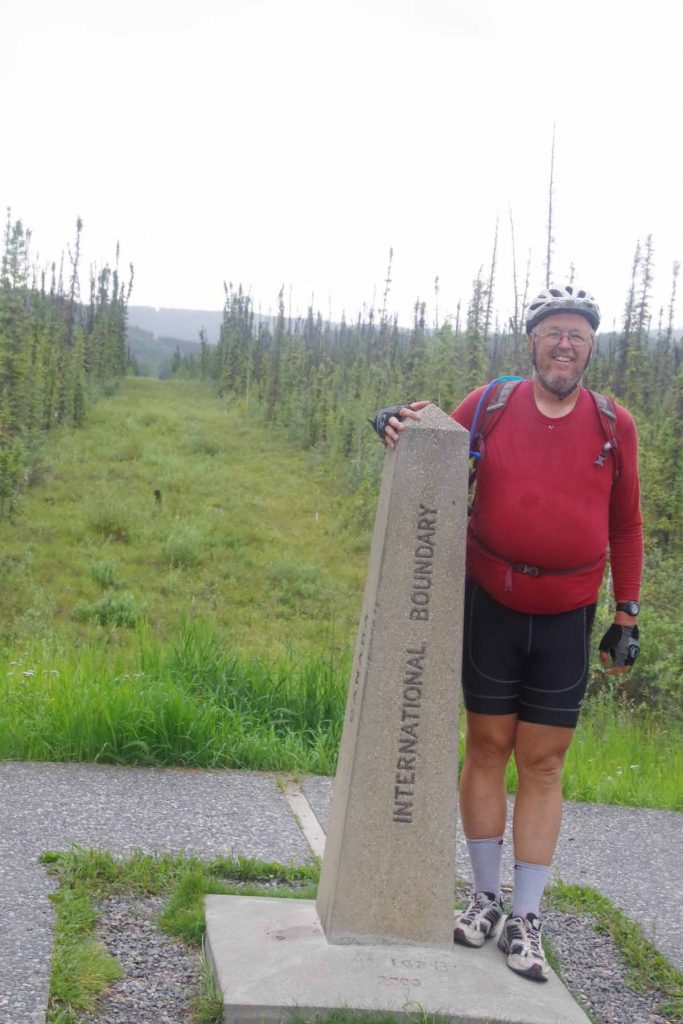 Photo above is the obligatory border marker photo. What is more interesting than my photo is you can see behind that they’ve cleared the small path all the way along the border in the distance. 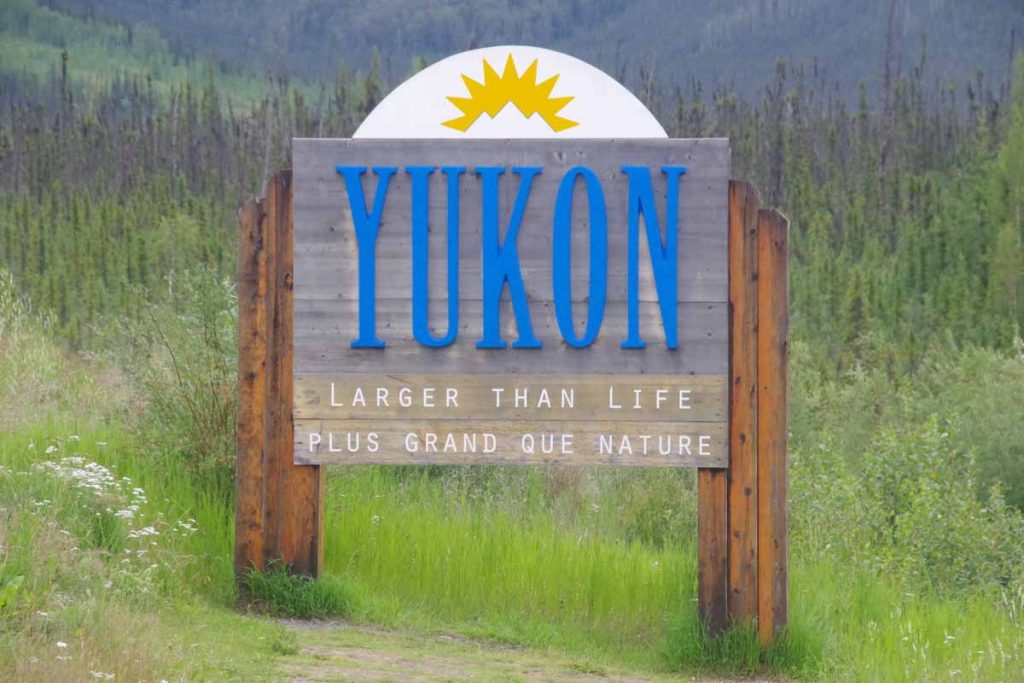 Picture above is sign for entering the Yukon Territory. These were all at the official border.
However, there were still another 27 km before I reached the official entry point into Canada. The first few kms were hilly and then it settled out better. 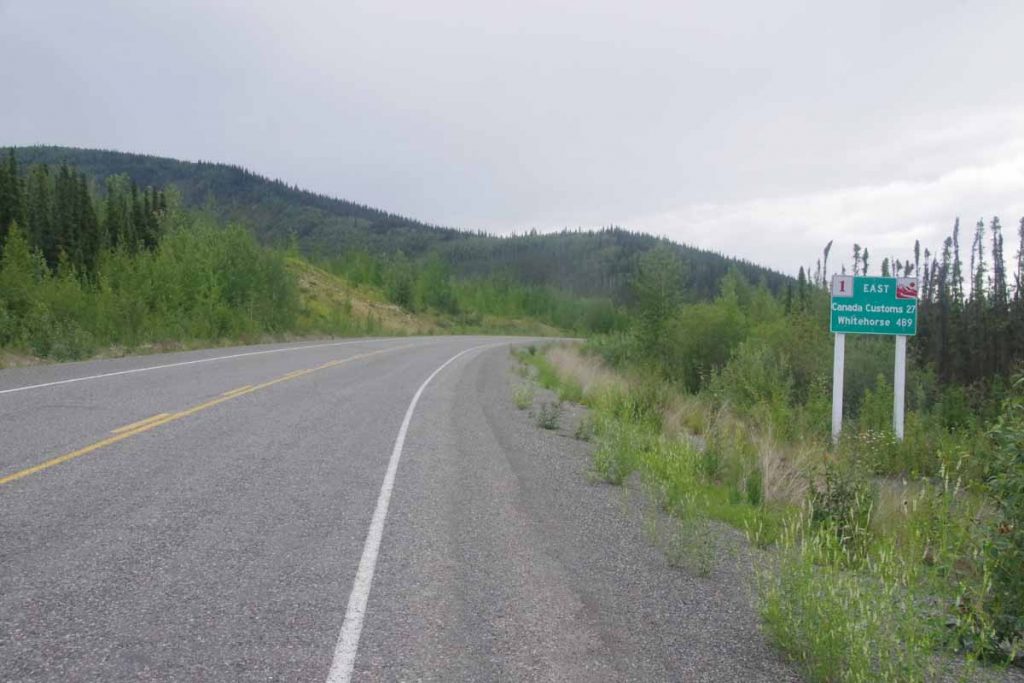 Along the way, I came past the crew from www.viapanam.today a Belgian runner who is spending 22 months running from Deadhorse to Ushuaia. They had two of these little campervans which was fun. 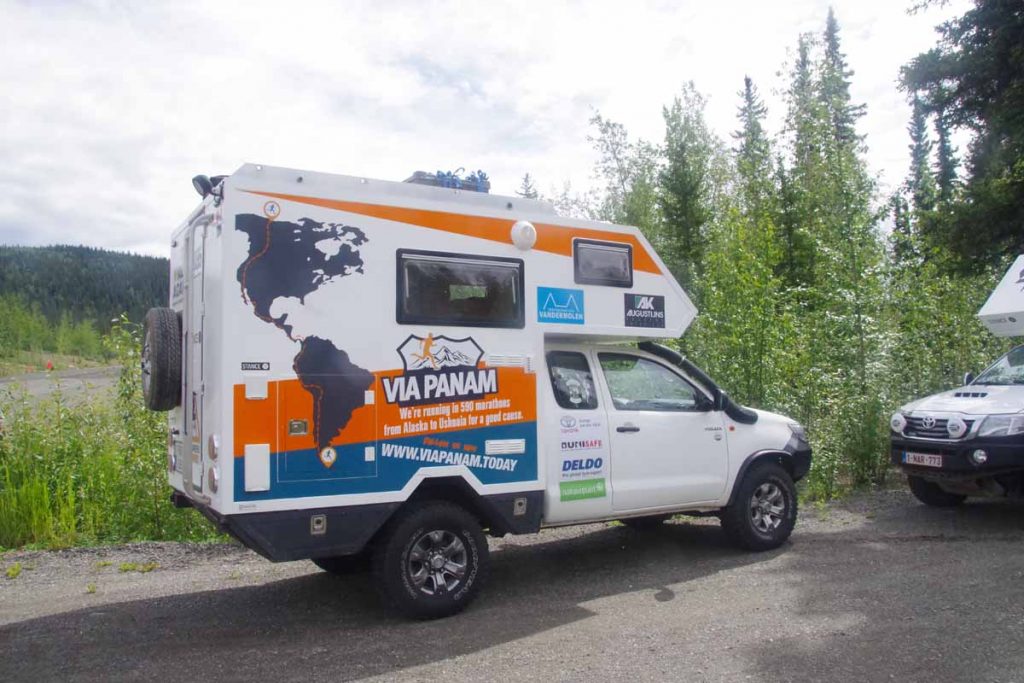 I cycled the remaining distance to reach the Canada Customs. They had some standard type questions such as whether I was bringing tobacco, alcohol, firearms or weapons including knives, bear spray into Canada. They also did a rough set of questions of whether I would be financial burden, e.g. did you have enough $ (I listed cash as well as ATM), that I wasn’t working but did have a house rented. They asked if I had visited any other countries in 2016 and then thumbed through my passport and noted the Khartoum (Sudananese) visa so I noted that was part of an African cycle trip. Fortunately with that conversation I passed the test and was on my way. I did specifically request a passport stamp.

Found a motel in Beaver Creek and got my clothes cleaned at local laundry. First night the wifi was having problems, something about having upgraded their phone service. However, I separately decided to take a rest day here and on second day the wifi was now working.

I’ve cycled six days and plan is now to take a rest day before tackling a similar distance from here to Whitehorse.