Two days cycling brought me to Kluane Lake. Looking at the maps, next point with motel and small grocery was Destruction Bay at 186km, a good two day cycle trip. I wasn’t quite as certain about the intermediate point but would figure it out. 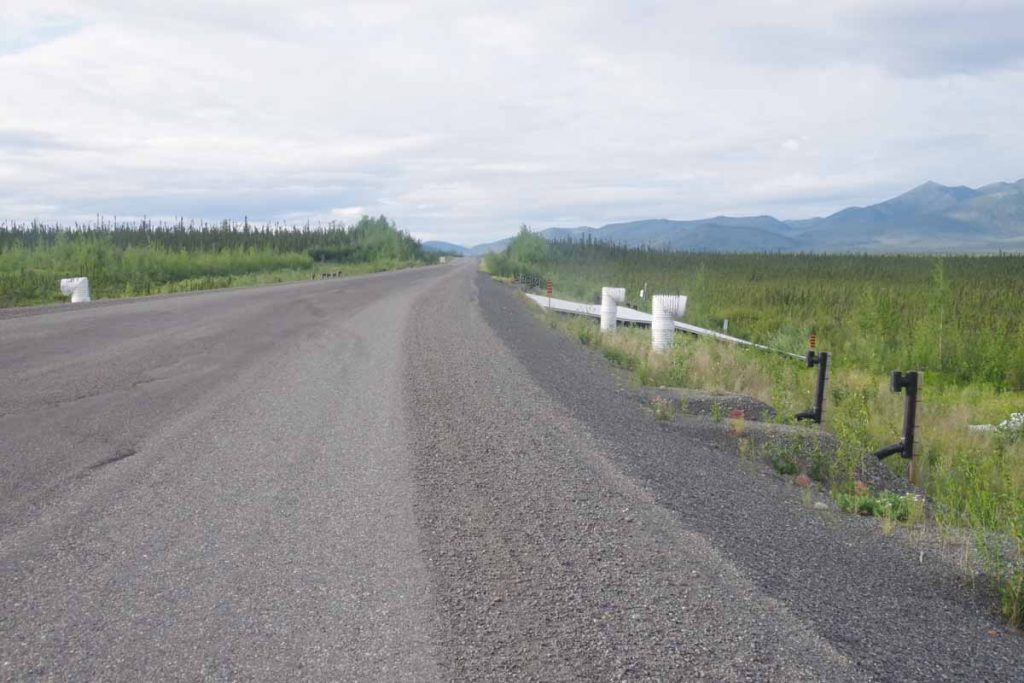 Photo above was taken several miles out. Apparently, the black pipes and white pipes are an experiment in handling permafrost. This was a fairly big issue for the first day route because the soils are a lot of loose sediment. If the road melts and then settles, it can sink away. Furthermore subsequent freezing causes the road surfaces to then bubble back up and become uneven. At least that was the explanation given on the rather bumpy rough chip seal as well as multiple areas of construction – some of which were also in construction in my 1997 trip. 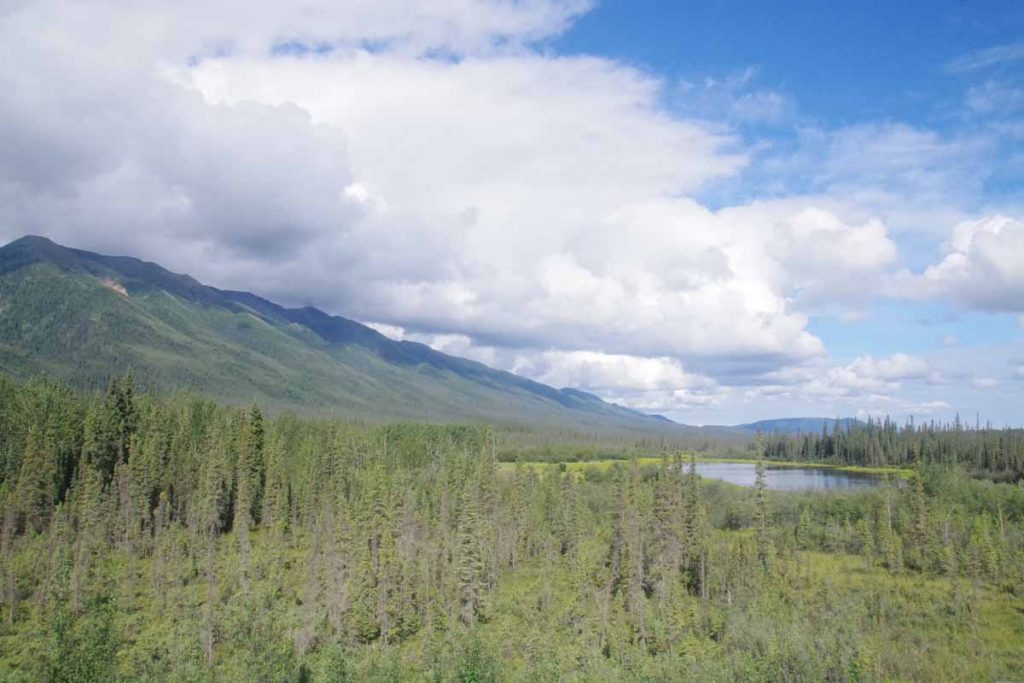 It was however again beautiful riding. At 30km I stopped briefly at a rest area overlook. I couldn’t see the highest mountains but still had some good views. It wasn’t flat, but also less hilly than the last two days. Not much later, a woman came by in truck, stopped and offered out a Gatorade. Thanks! She did have a question where us cyclists slept, so explained it.

At 40km, there was a pickup parked that seemed associated with road crews. I asked about the road ahead and he also warned me that a bear had been sighted another 20km down the road. He had a photo. In the end I didn’t see that bear, but overall plan would have been to stick to the road and not do a lot of stopping. 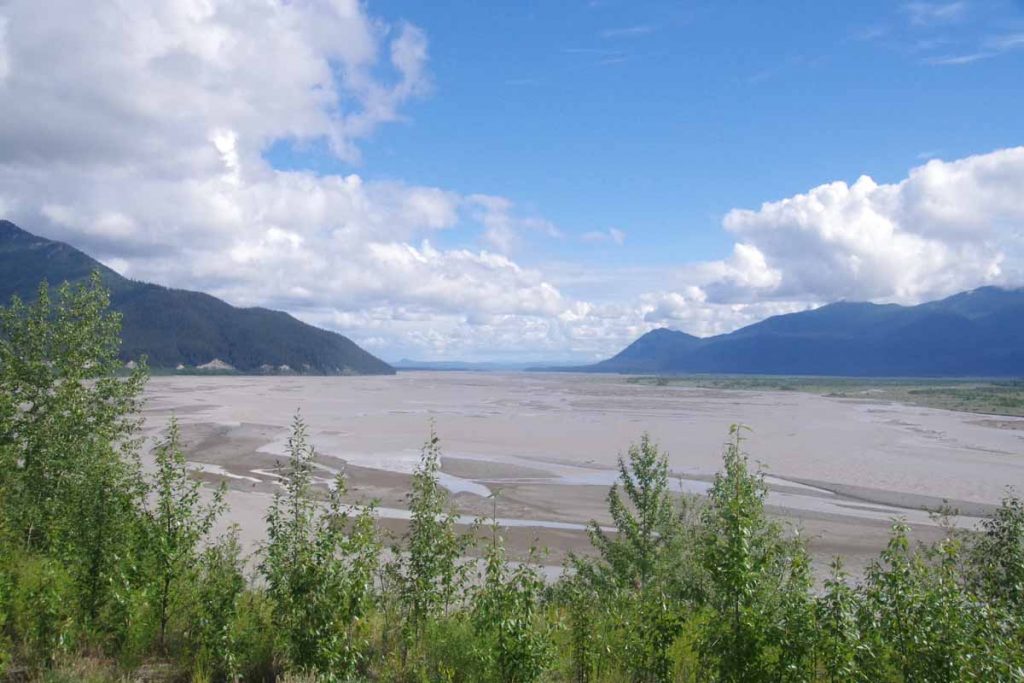 At 52km, I crossed the White River shown above. I was rather impressed by the huge flat silty path the river had placed for itself. I had started following a region named the Shakwak Trench, a relatively flat valley sandwiched between the high Kluane Range and a smaller row of mountains. On the flats, rivers like the White River could really spread out their sediment. 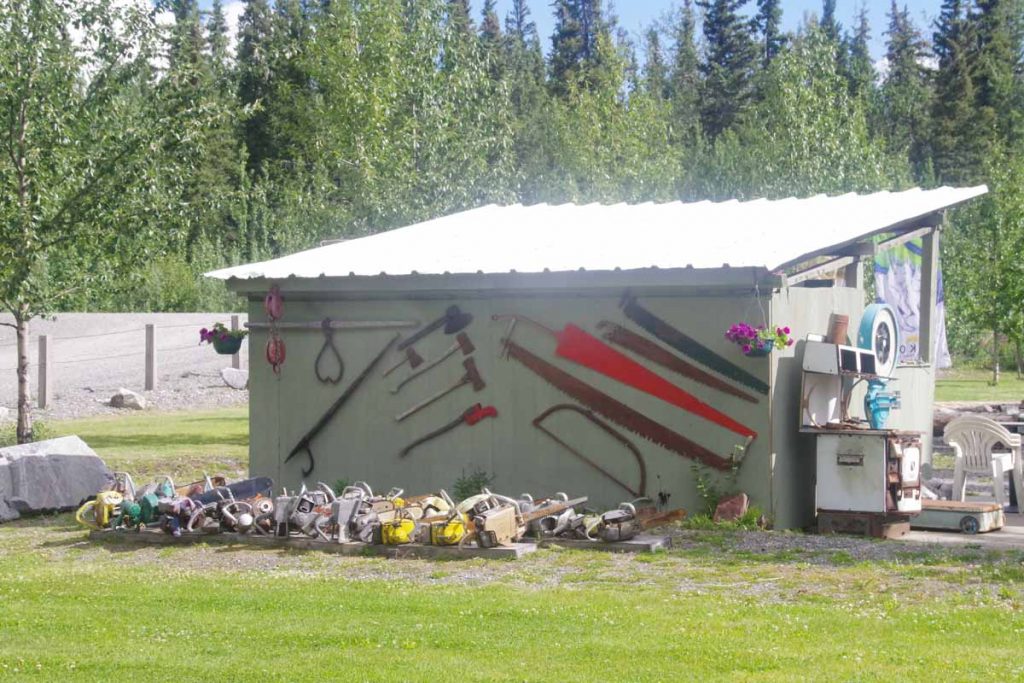 On other side of the White River was an RV park, with the saw collection including chainsaws shown above. Too soon to stop for the day, but good spot for an ice cream and refuel. 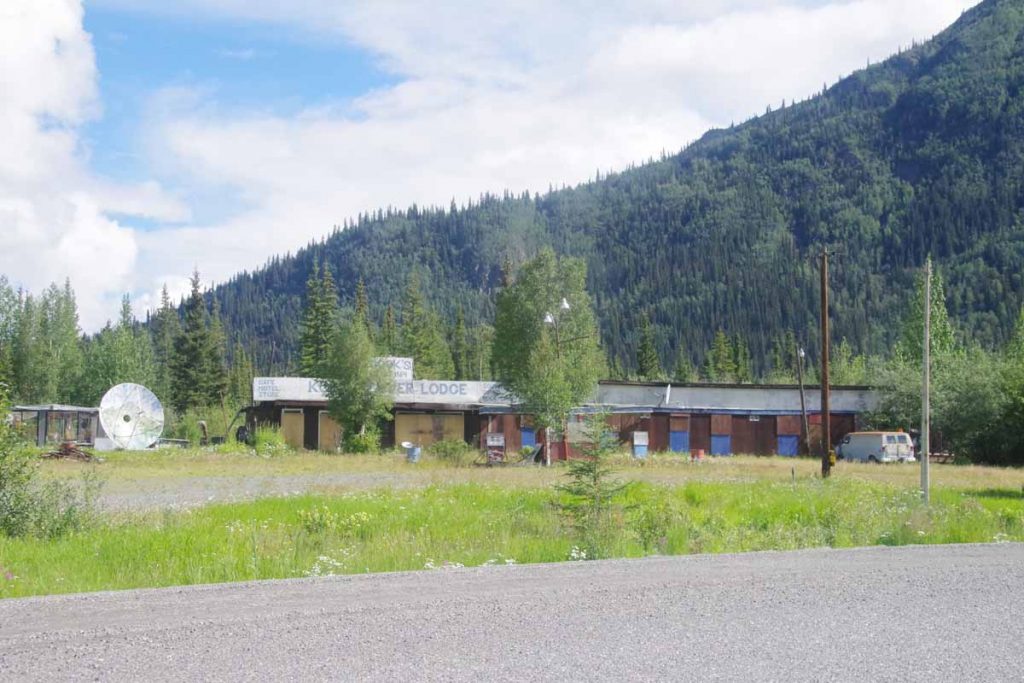 Another 8km brought me past the Koidern Lodge where I had stayed 19 years ago. Another of these old lodges that have fallen into disrepair. 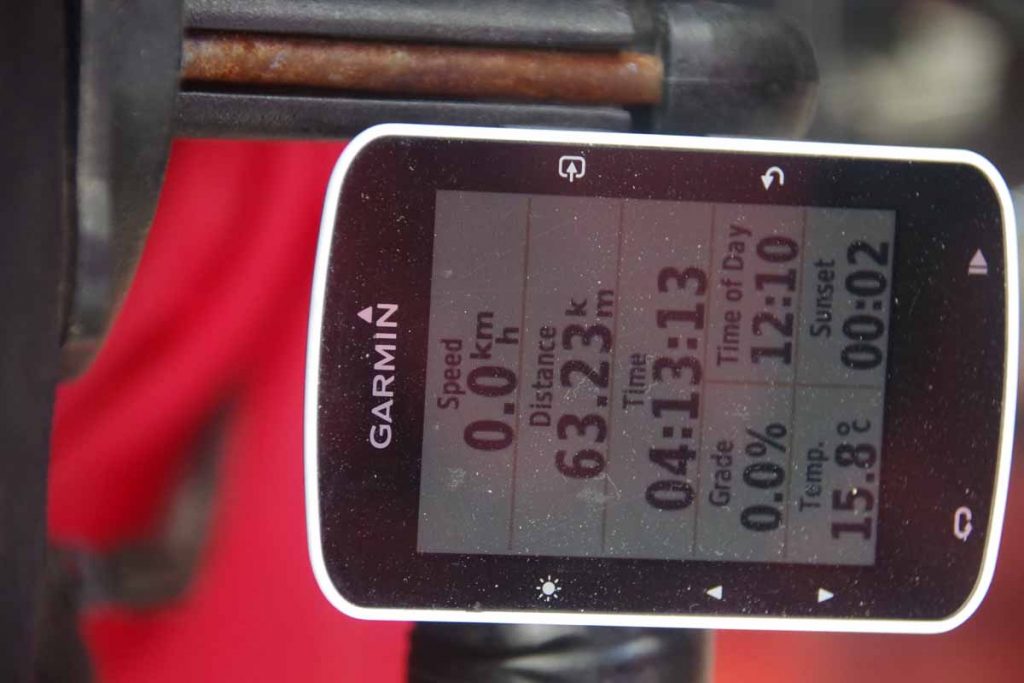 Picture above shows the “cockpit” that I’ve programmed my cycle computer to show various measures. Time, speed and distance and the most interesting ones but also nice to see the road grade (seems to measure slightly high) and temperature. What also was fun to see was the sunset time. As I have cycled further south the sunset adjusts – first day it started 10 minutes past midnight and now was only 2 minutes past midnight. 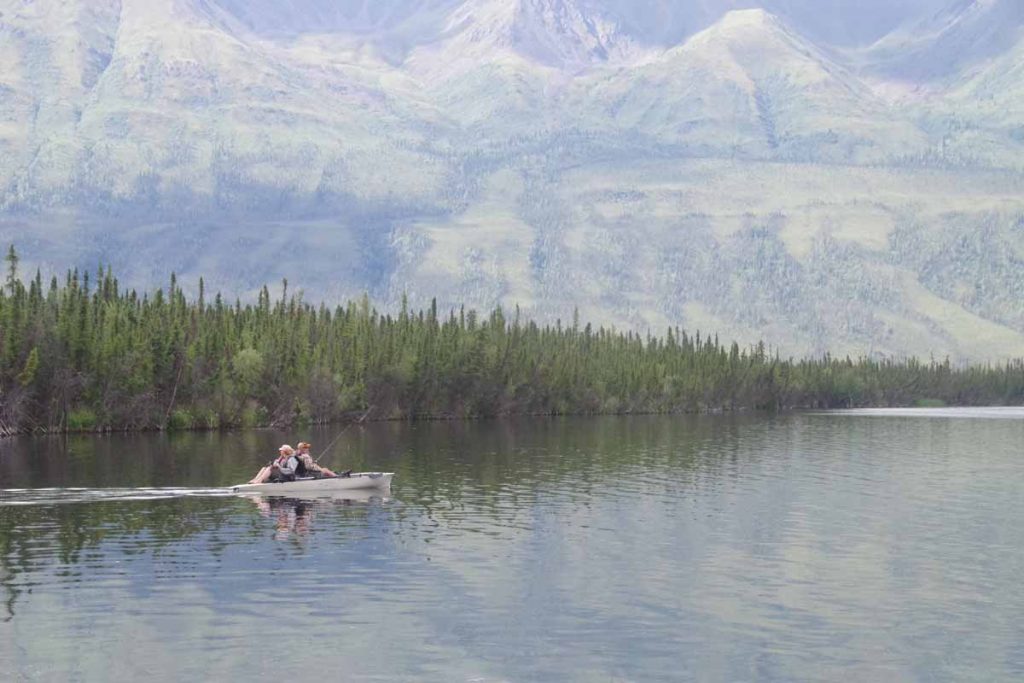 Next photo was taken at local rest area where two fishermen were boating along. After this I passed a campground at 80km. The guy that warned me about bears 25km back this time offered a ride in his pickup to Pine Valley, but I politely declined. 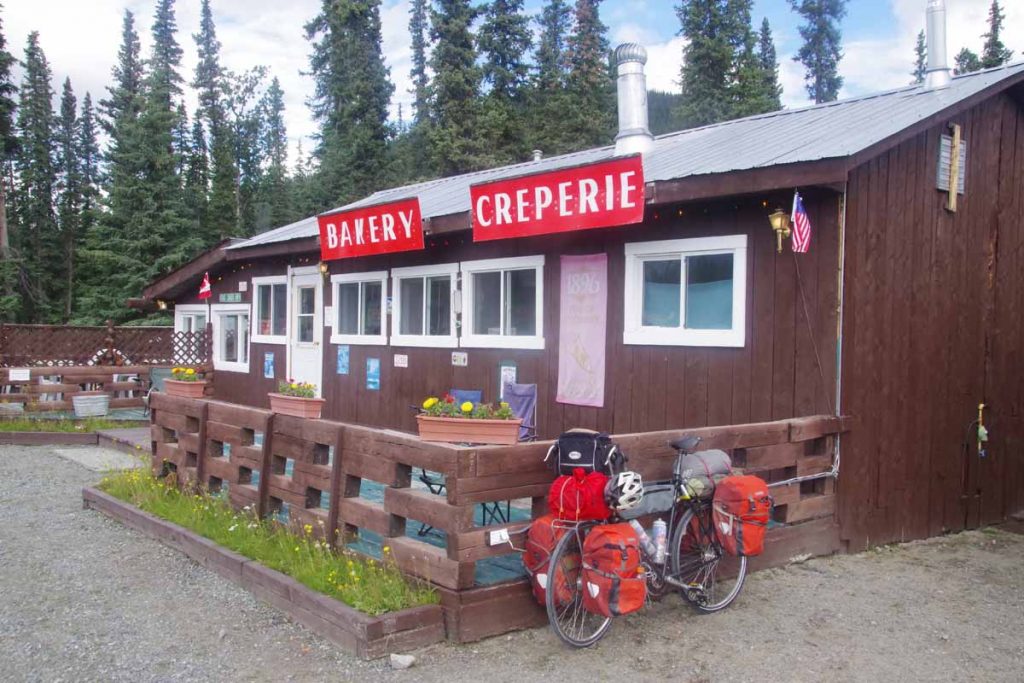 However, kept going to 88km to reach Pine Valley and this bakery. Yum! While it was still somewhat early, decided to make this end point for the first day. In part several factors:
a. Road construction starts very close after this. I’m told they use a pilot car and will want to take me in the pickup.
b. There were no formal campgrounds or places to stay and even not very many creek crossings listed. So I suspect I could find a spot, but still nice to have a guaranteed spot – particularly with some of the bear sightings in this area.
So I rented a cabin and had some crepes as well as relaxing afternoon. Only one small drawback was after I’d put the bike in the cabin, the owner came out and told me the bike had to be outside. So I unloaded my bags and locked the bike outside. I think he observed if there was any dirt it was actually on the panniers, not the bike – so not sure it was particularly effective for either of us – but still trying to follow the rules.

One interesting thing I noticed is this establishment was for sale (~$400k Canadian) as well as several other establishments I’ve come past. My own theory is there is a fairly high mortality rate for the mom and pop establishments. It definitely seems like a tough time to make most of your $$ in a short but very intense summer period between May and September. During that time places seemed to be open ~14 hours a day (7am to 9pm) and subject to whatever road traffic comes by. If it is just the “Mom” and “Pop”, then can be tough to get much relief and hence not quite as romantic idea as the “lets start a bakery on the Alaska Highway” notion. 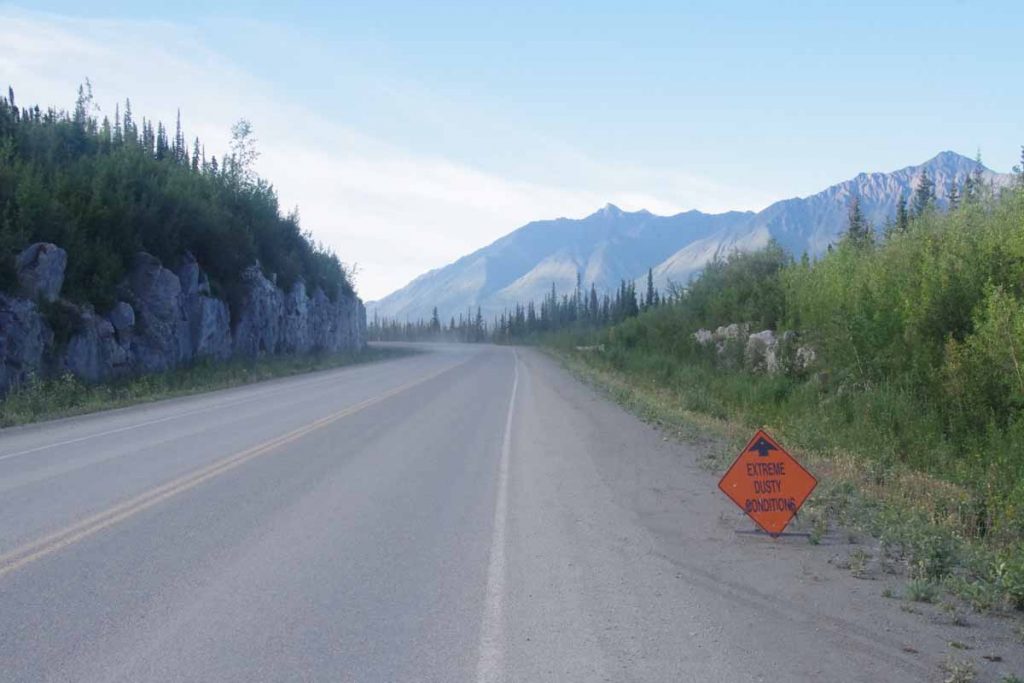 Second morning started with a nice cinnamon roll from the bakery and then tackle the road ahead. I expected some road construction fairly soon and saw the signs starting out. 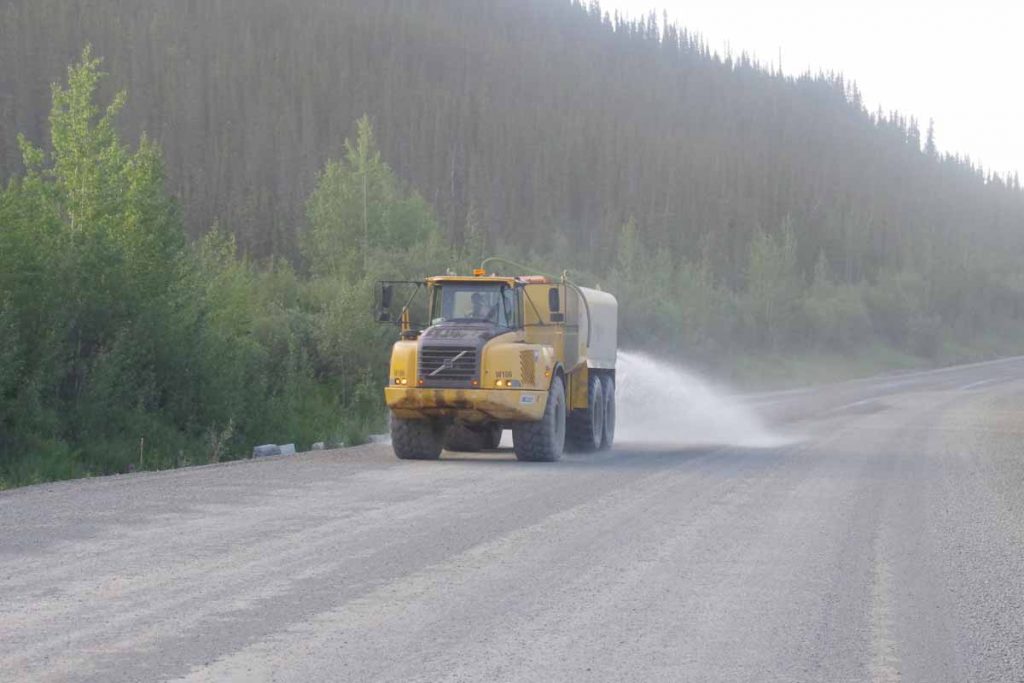 There were gravel patches again along with this water truck helping to keep the dust down. Fortunately, not enough water to really generate much mud. 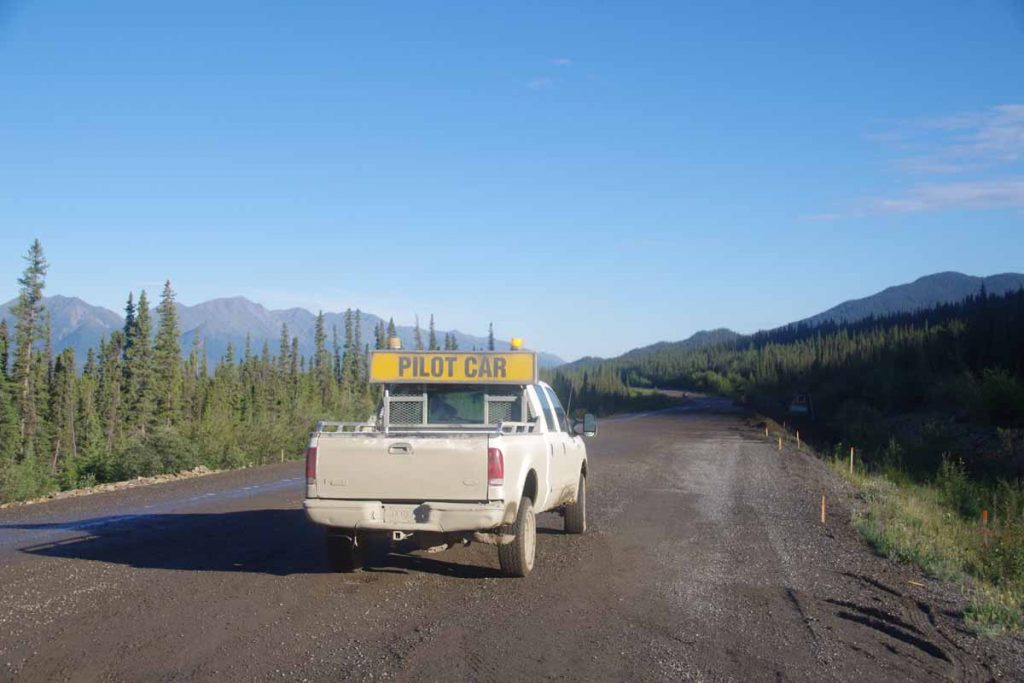 At 7km, I came to the real construction and they let me know I’d need to put the bike in back of the pilot car for a 10km segment. That all went fairly quickly and I got further intelligence about other cyclists on the road (three yesterday) as well as some past experiences with cyclists. Apparently, some are a bit more belligerent about going in the car.

The pilot car let me off at 13km. I think they were accidentally 4km short, but there were several cars waiting to go the other direction. 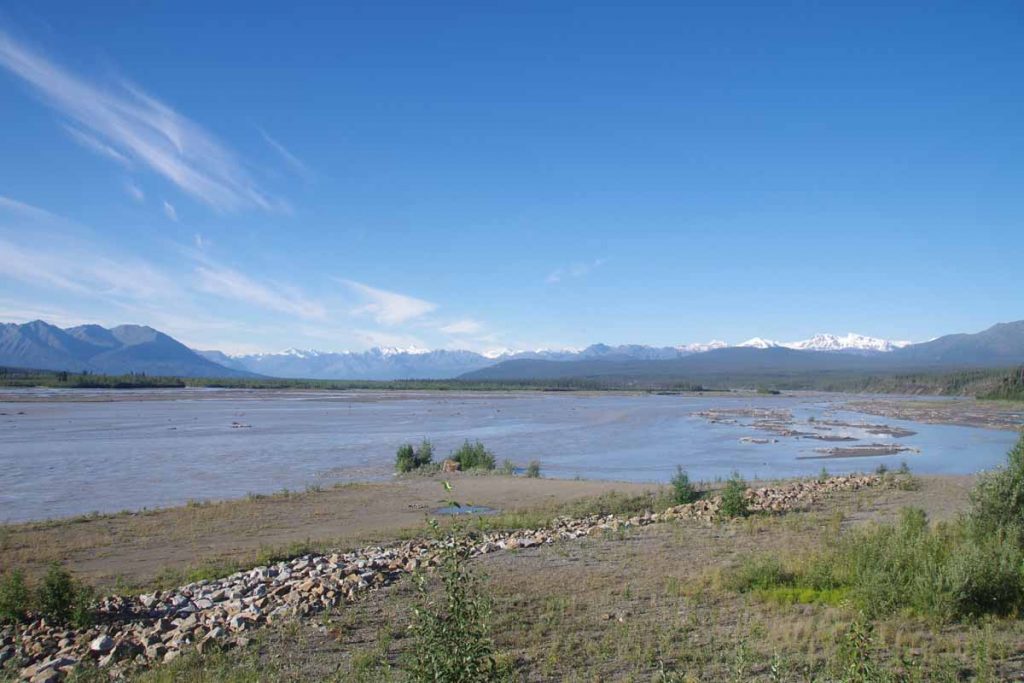 At 23km came to the wide and silty Donjek River. After this some more substantial climbs. Off in the distance one could see the St Elias mountains. 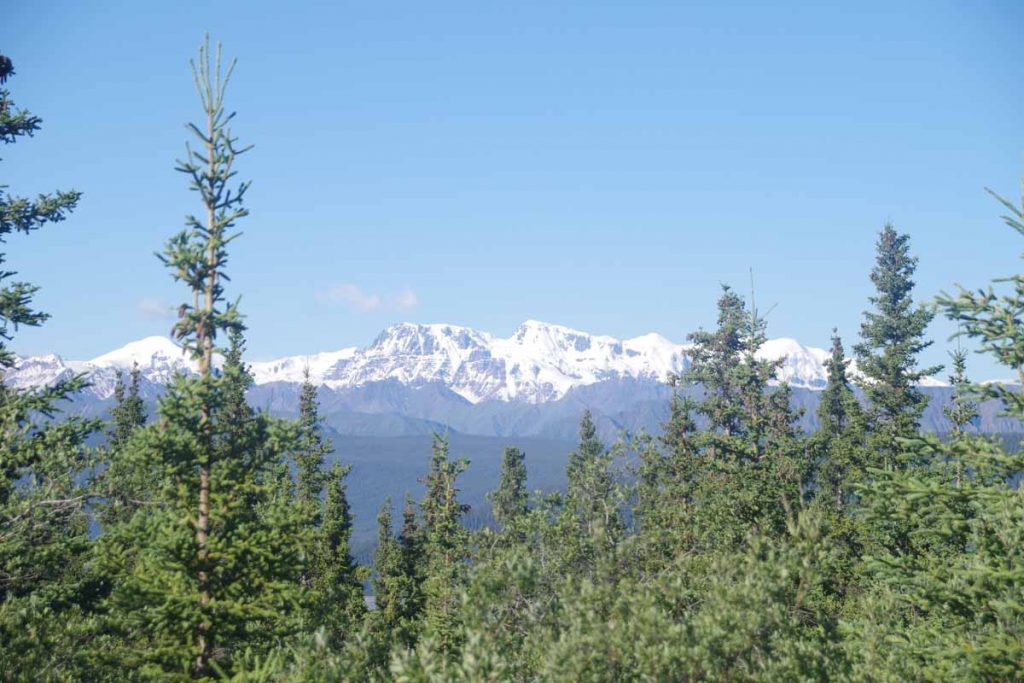 Photo above of the mountains. Local signs indicated Canada’s 16 highest peaks were all found in this area. As I crested top of the hill near 57km I stopped at a local rest area. One cinnamon roll hadn’t quite been enough so an early lunch. Two cyclists came up. Dave and Sarah from the UK were cycling from Anchorage to San Diego. We exchanged notes (they had camped at the Donjek) and they set off ahead while I finished eating. 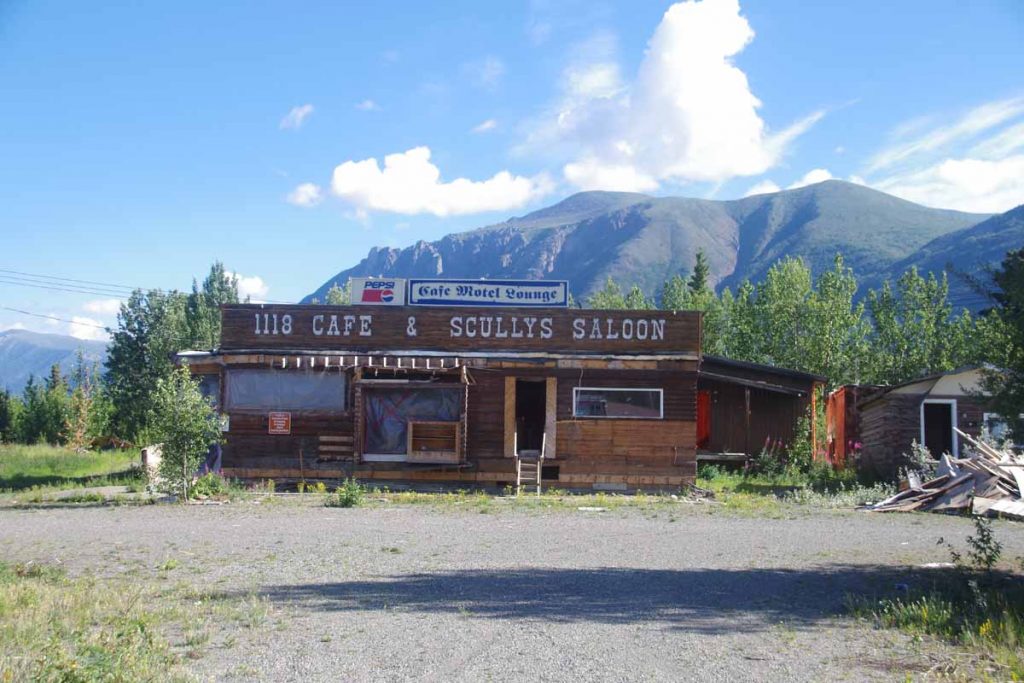 Unfortunately after this point and for rest of the day, the wind starting picking up and it was a headwind. So I was more nourished, but still was tougher cycling. The road had a few ups and downs but nothing too severe. 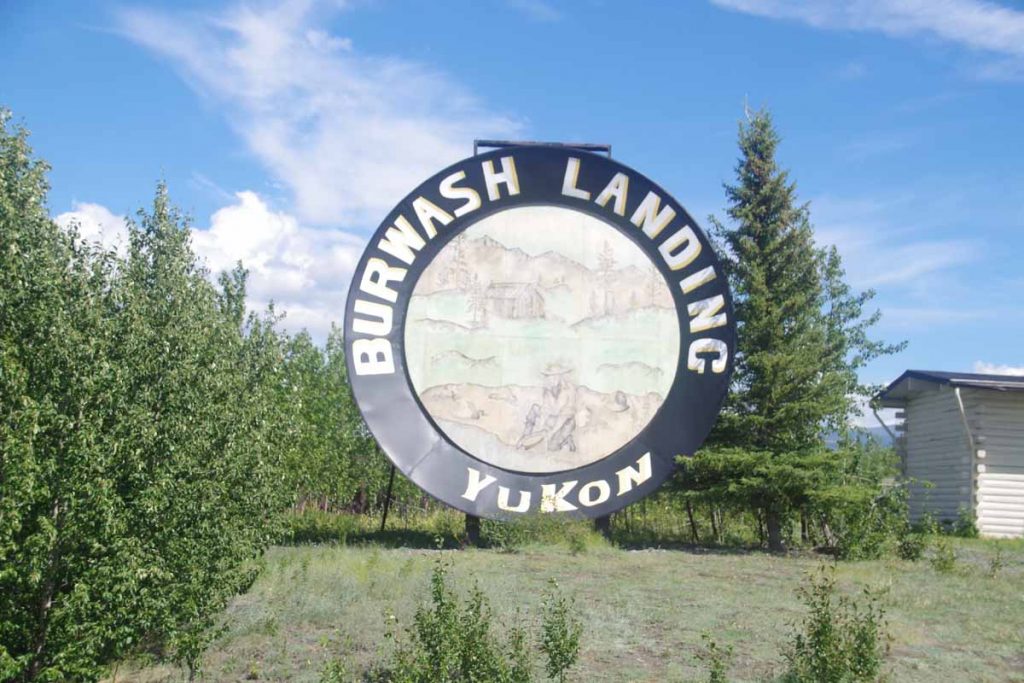 At 83km was a Burwash Landing with a museum and not much else. Also here is the world’s largest gold pan. I went through the museum, partially to get some water but also to get a break from the wind. 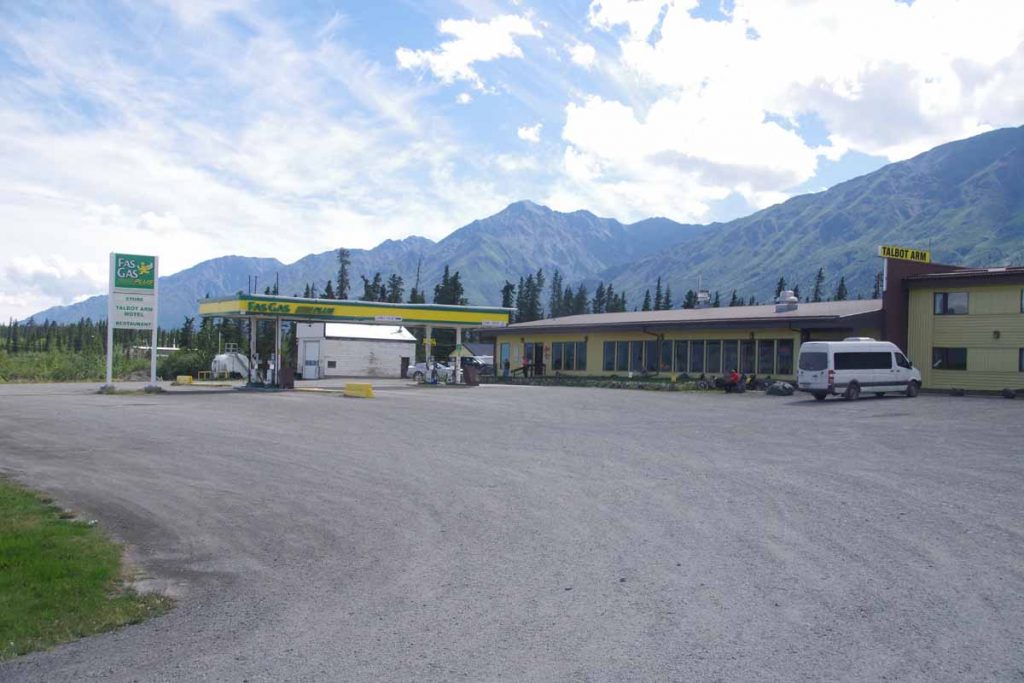 After that the last 16km brought me to Destruction Bay and good chance to rest and refuel. Saw Dave and Sarah here and they were going a little further to upcoming campground. I figured I’d tackle those miles tomorrow. Nice to be here in Destruction Bay on shores of Kluane Lake. Definitely next to a very scenic and dramatic area of mountains.