Today the rain made for a tougher day than it otherwise would have been. Forecasts told me 80% chance in Destruction Bay (my starting point) and only 30% chance in Haines Junction (my ending point), so figured it would only be getting better. 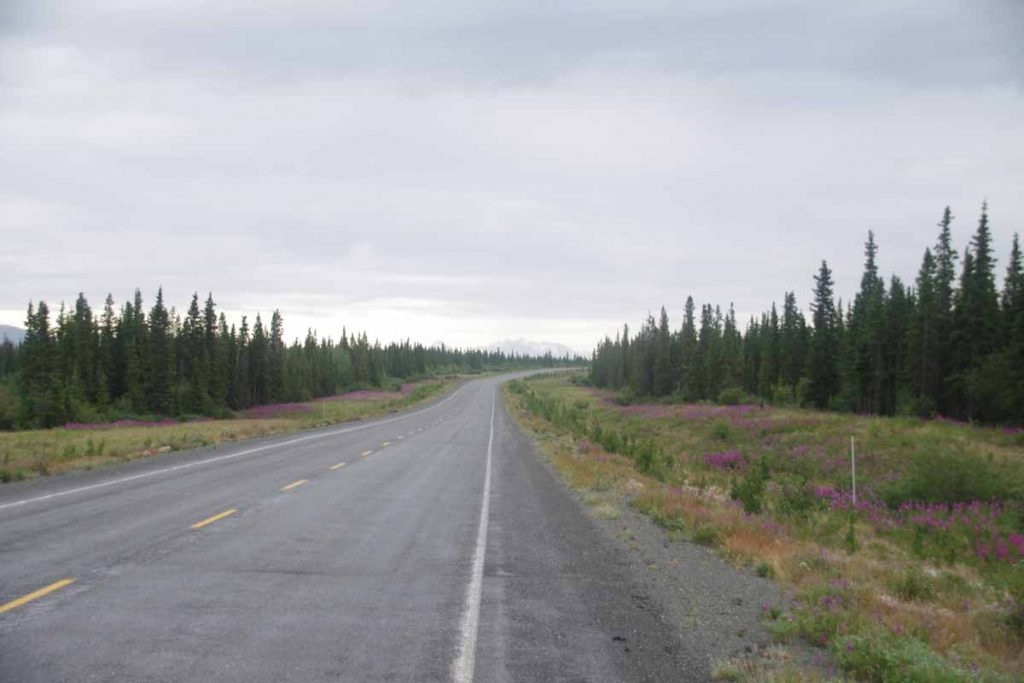 Skies were overcast but otherwise dry and 10C (50F) when I started out. Fortunately, no more headwinds from yesterday. Slowly going down the road when at 13km, my front tire went flat. The tire has some small holes and something must have gotten in to puncture. I patched the tube but it already had four patches so also swapped in a new tube. Took my time carefully getting everything right. As I was doing this it started to sprinkle. Put on my rain jacket anyways and from that point until 80km point, it never stopped raining. 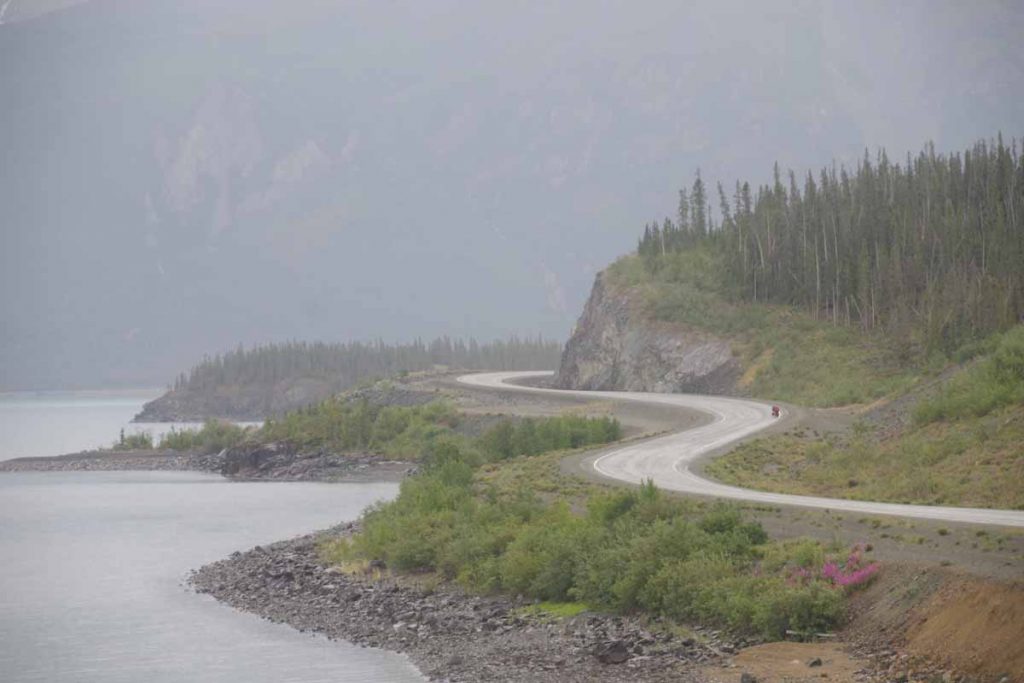 At 26km, I came past an RV park and right at this point, Dave and Sarah came out. They had stayed there last night at a nice spot right along the lake. In this stretch the road followed the coast and if you look closely on photo above, you can see them cycling on the bend.

The road followed the lake around the next turn and suddenly the headwind was back. Coming due from south. The rain increased and temperature dropped to ~7C (45F). It was tough and cold riding. Up ahead at 36km was a small visitor area where I stopped in to warm up. Had nice exhibits about the Kluane Wilderness area and also one could rent bear canisters here and then return them in a “bear canister drop box”. 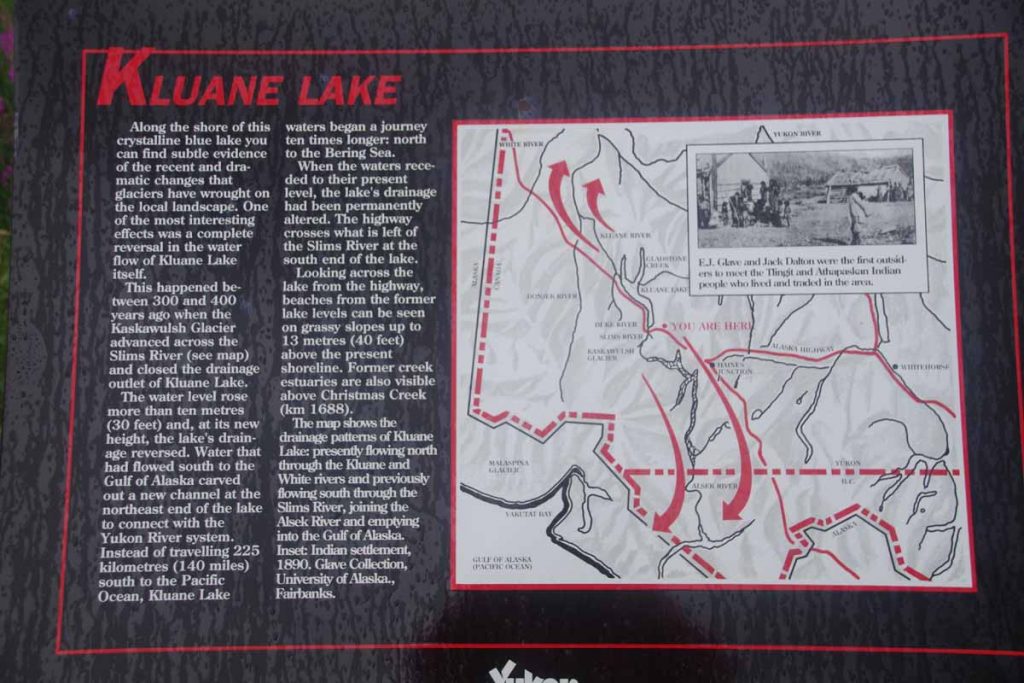 Fortunately, after visitor area the road followed the lake shore around and then down wind. Still wet but better. At 44km the road also started to slowly climb away from the lake. The photo above was one of the plaques at 50km rest area.

The summit was at 52km and then a quick drop and then climbing again. The rain and cold increased in intensity so no photos for the next 50km. I was still warm enough but considered finding a spot to pitch the tent and just get a stop to the rain. However, one thing that kept me going was far ahead I could see a patch of blue sky. While it was still wet and cold at least the road ahead looked better than behind.

It took until 80km before the rain eased and then fairly quickly also stopped. The road was suddenly dry. Wow! It also warmed to 10C and then slowly a bit more. At 86km I reached a second summit, at 1004m the highest point between Fairbanks and Whitehorse. 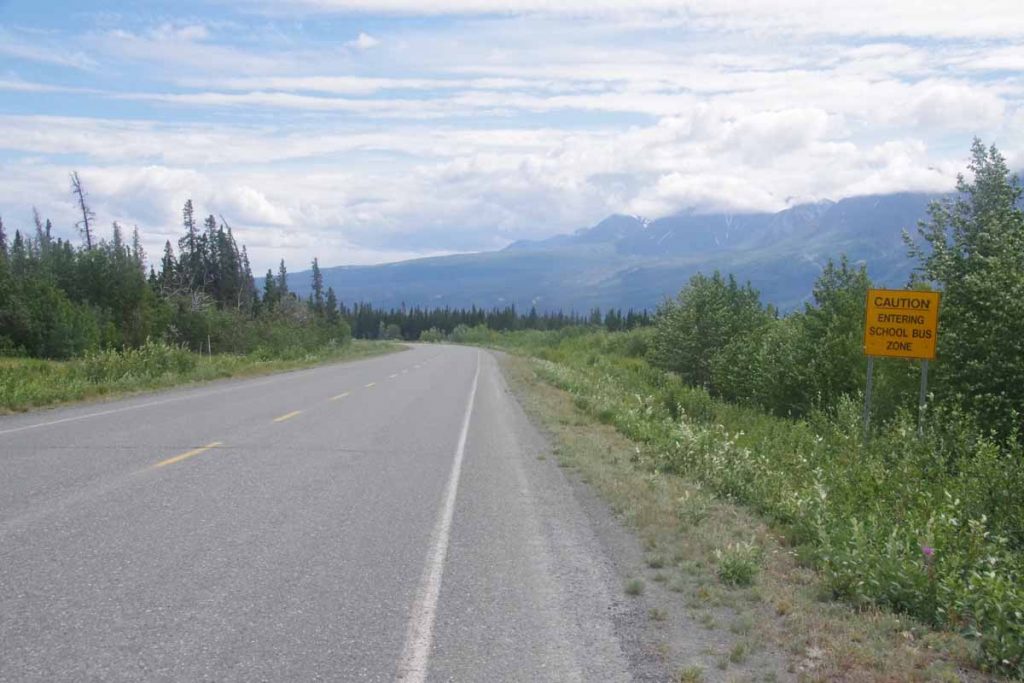 The next 14km past the summit was suddenly descent. No need to pedal, but instead watch to make sure I didn’t pick up too much speed. Somewhat amusing I found this sign around 96km warning of school buses and knew I was coming back to civilization. This community has around 100 residents, so not sure they have more than one or two school buses.

At 100km the chip seal ended. Wow! Smooth asphalt, it had been a while and definitely made a difference. Rode the last several 6km to reach Haines Junction. Overall 60km of wet rain and two longer climbs made for a bit longer day, though a 14km descent at the end still made it not too tough. I then got a chance to wander around Haines Junction. 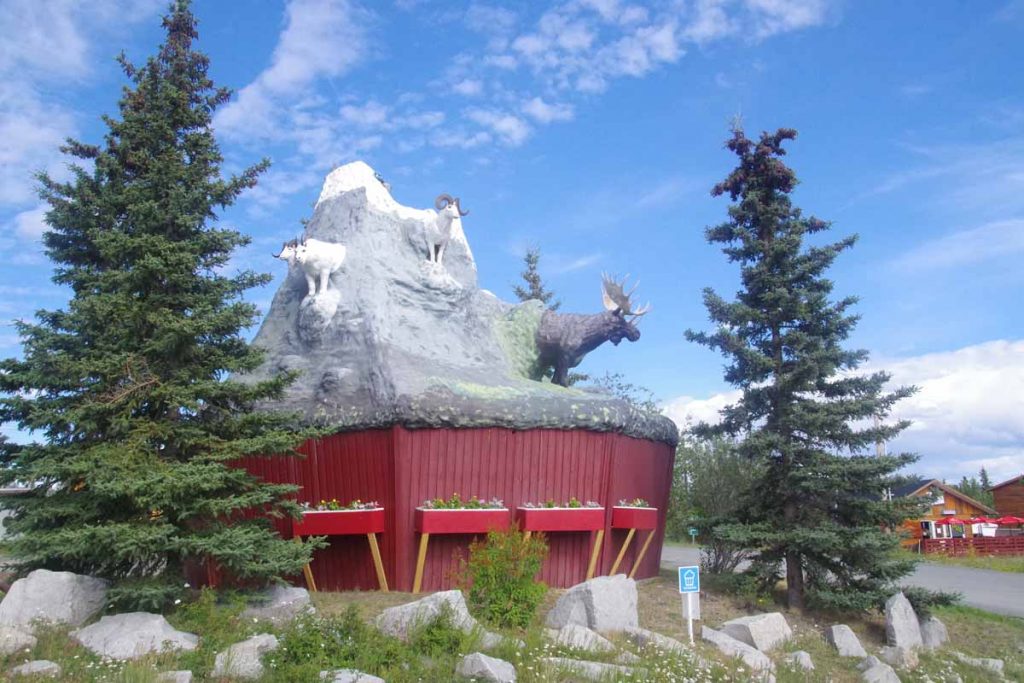 On the main highway intersection is this statue. Locals call it “the muffin” since it looks like a large muffin with animals embedded. Interestingly enough on several back streets there are also blue signs directing people to “the muffin”. I found a nice bakery (opens at 7am!) and they also had a muffin sign but explained the inside joke to me. 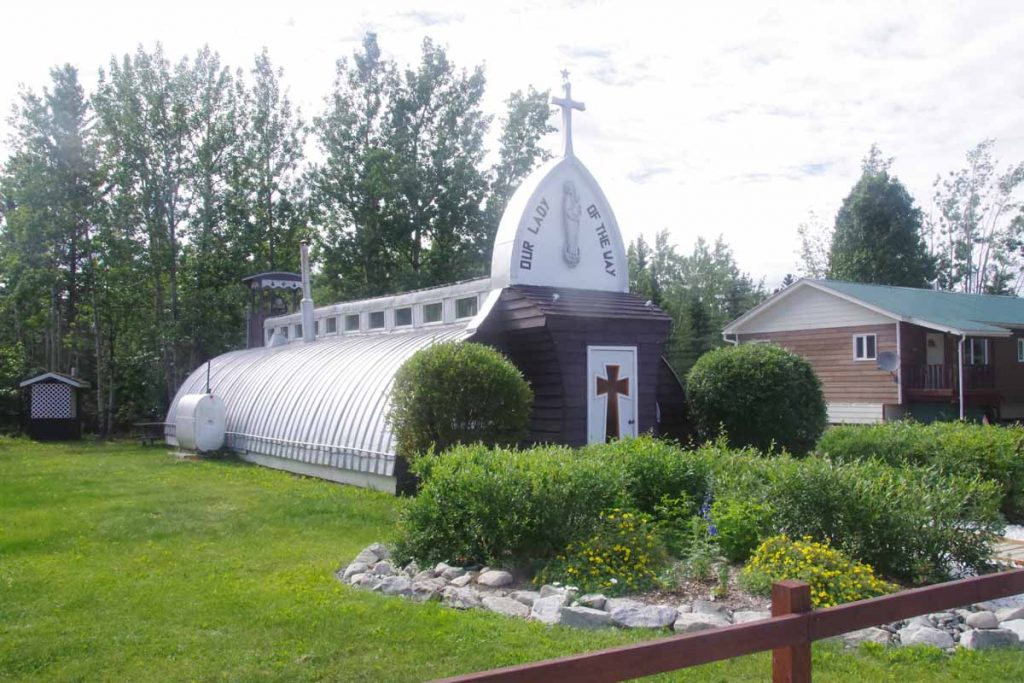 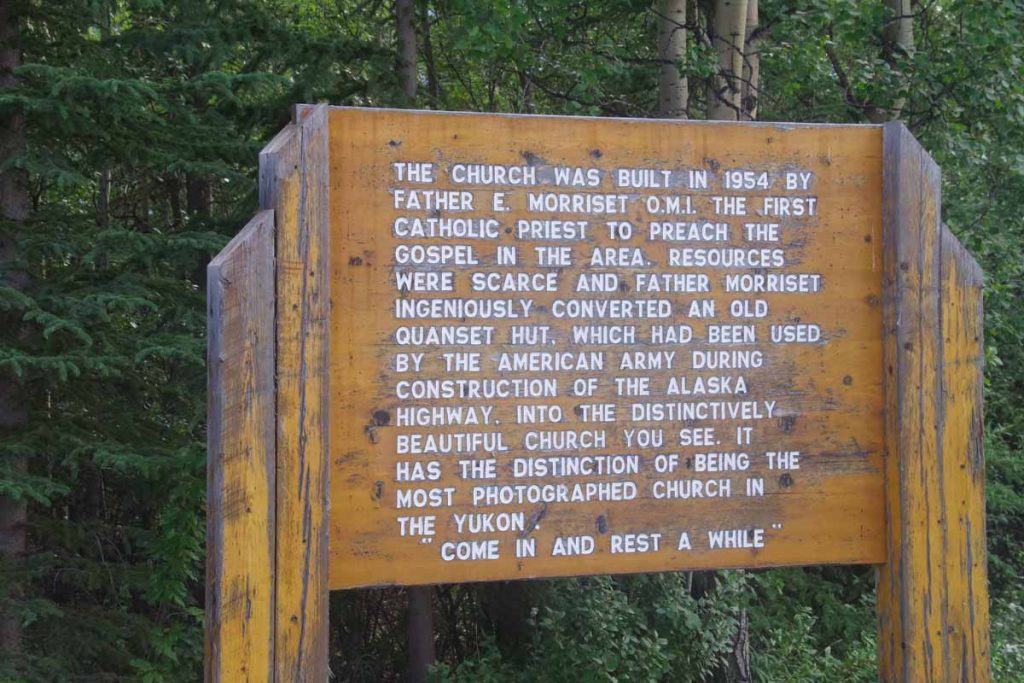 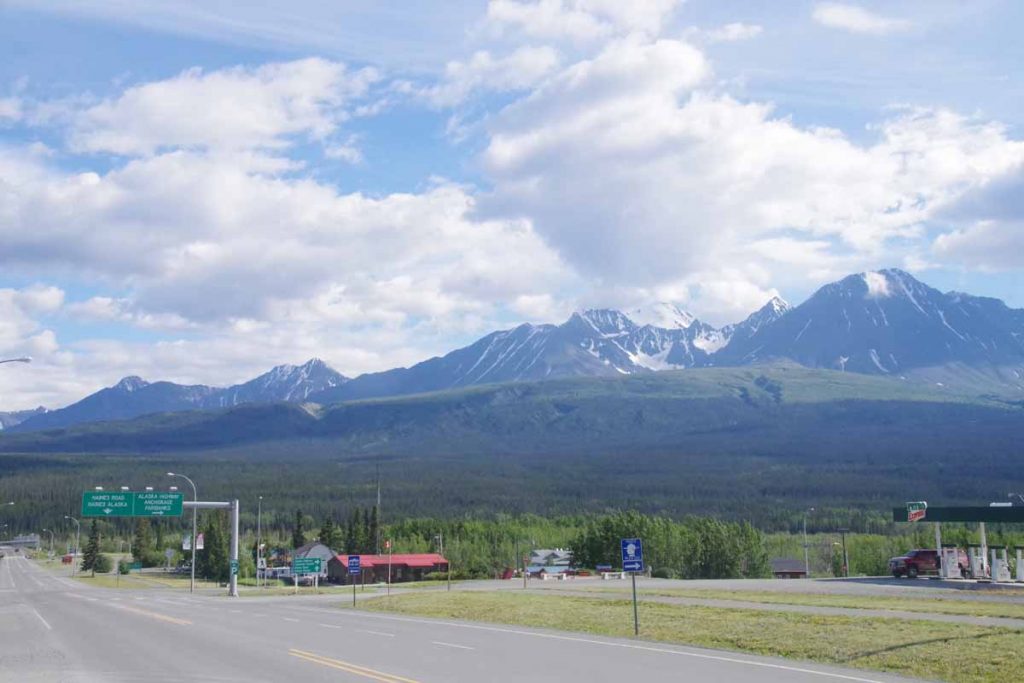