↓
Home→Canada→Yukon→Whitehorse, riding to the big city

I figured I would ride the 100 miles from Haines Junction to Whitehorse in two not very difficult days. I had cycled this road twice before both times in a day, but even then it was a long day. 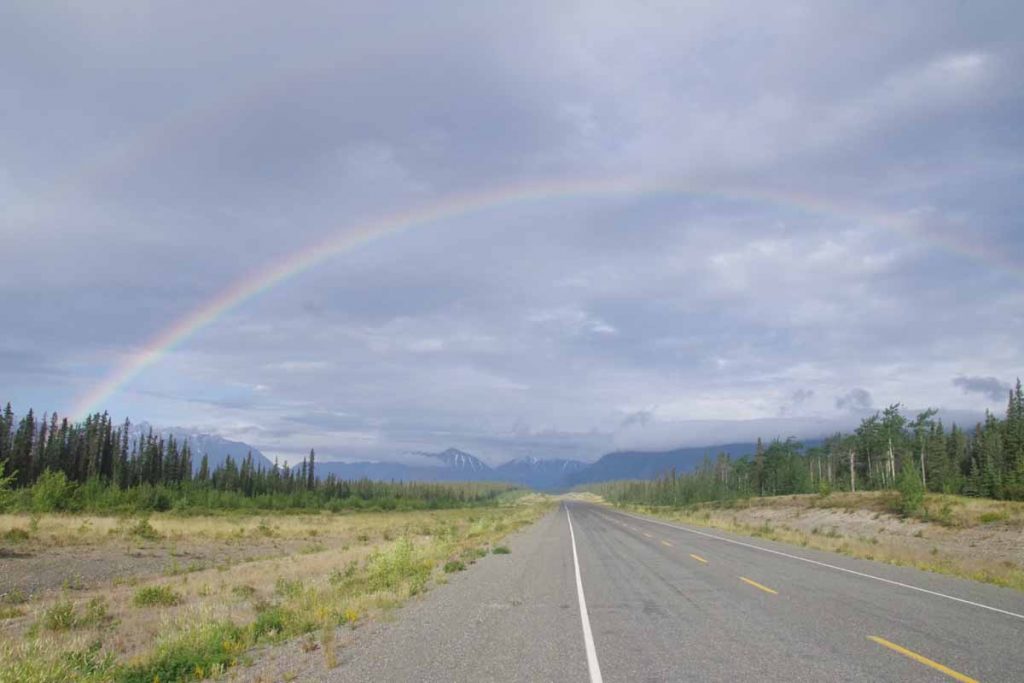 It was a cool morning and all was riding well as I departed around 7:30am. Past the airport and soon in the more rural areas. However, I did notice a few more “subdivisions” in this segment, so looks like more people are moving or putting summer cabins here. Around 15km, I could see a small patch of wet pavement ahead. Rather strange thing as I cycled into the sprinkling rain on the pavement and then 3km further it was dry again. It was as if a rain cloud had chosen just this small part of the road to water. Looking back I could see the rainbow in photo above. 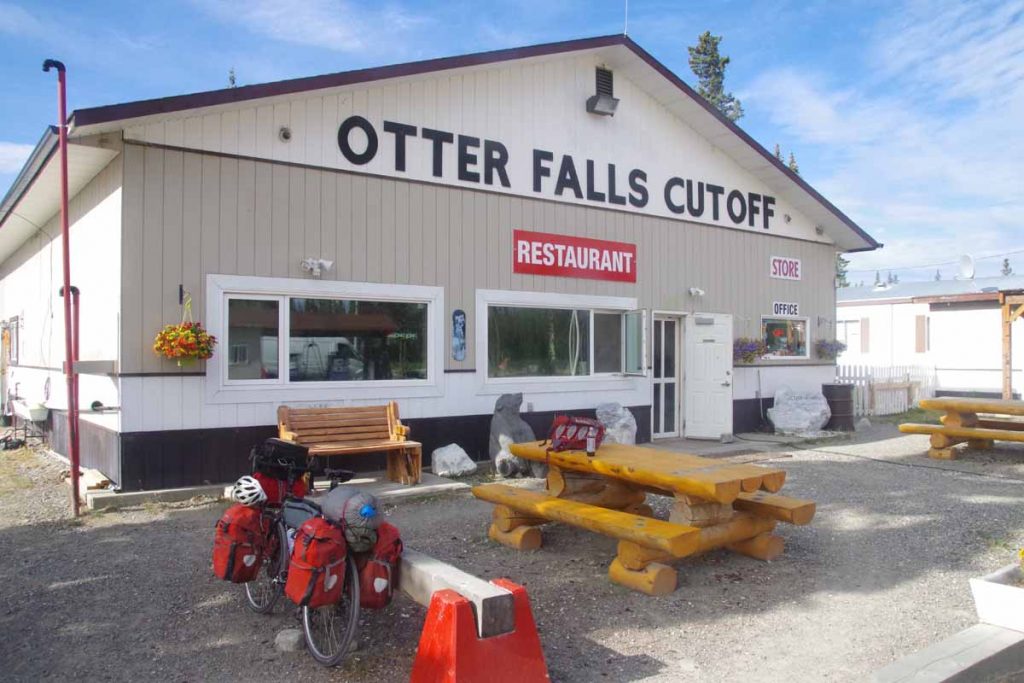 Otter Falls was at 32km and good spot to have a real breakfast. Friendly waitress who suggested I take the road past Champagne rather than the main road. Also a friendly and curious dog who mostly was trying to figure out if I’d give it a treat. The pavement was still good to this point, though started getting more chip seal after this. A few small hills to go over but overall going fast than previous days. 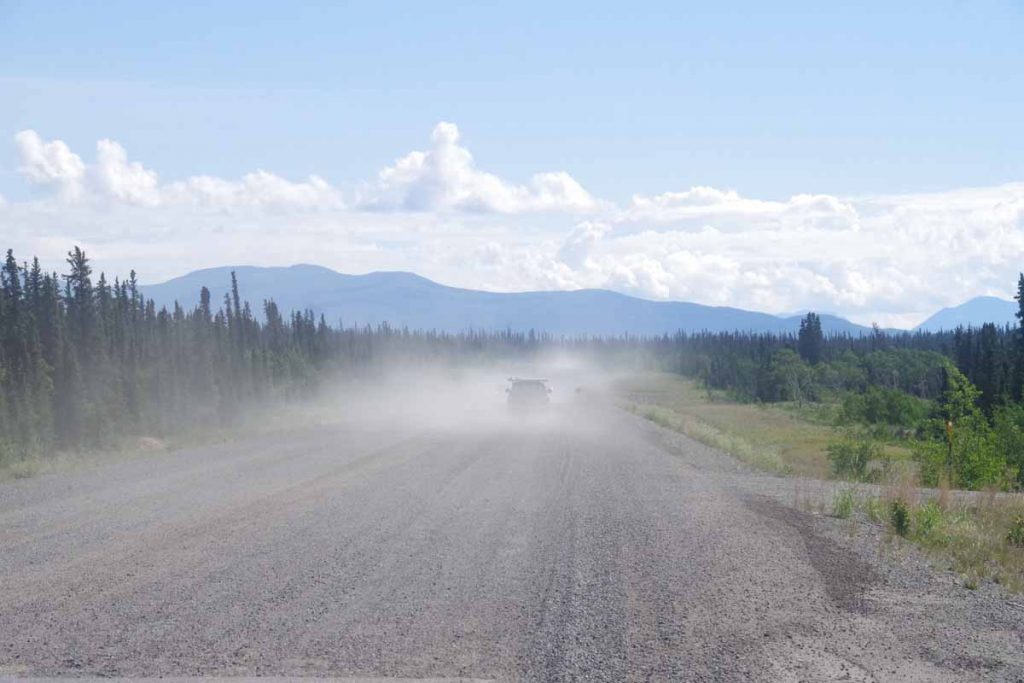 At 59km signs told me of 8km of road construction. Lots of dust here and a hard surface that was tougher to ride. Fortunately, at 60km was the turnoff to Champagne. This was the old road until 2002 when a bypass was constructed. Champagne was a native (First Nations) village that was 5km into the road. This route was great! Not only was there no traffic, but the chip seal was similar in surface to the main Alaska Highway. I also got to skip 7km of dusty dirt road. There were two short steep hills but nothing too bad. 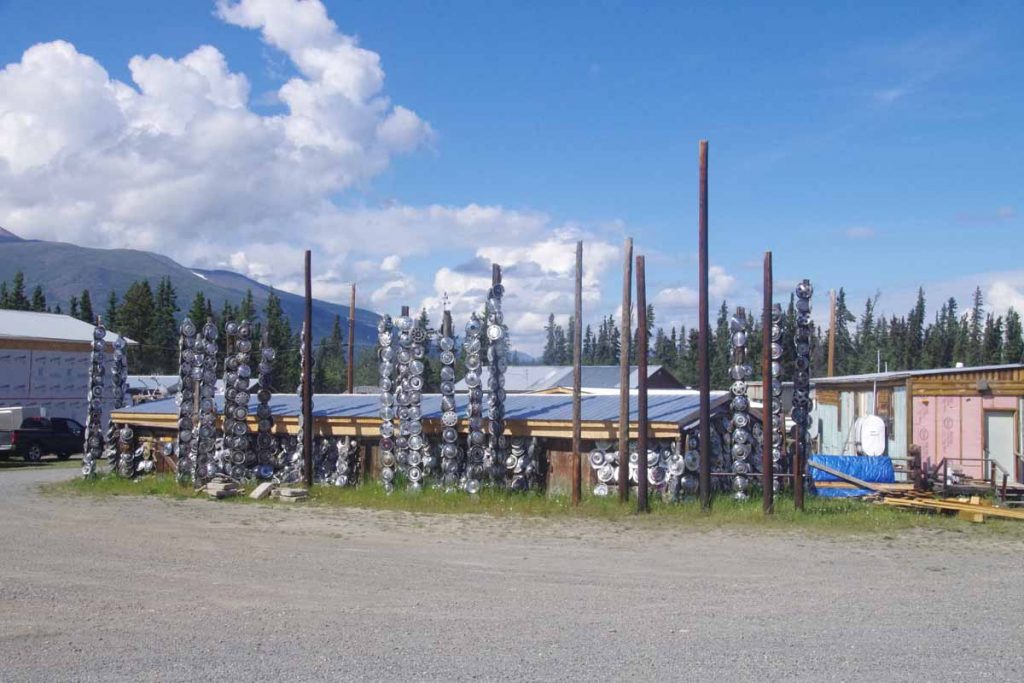 The town of Champagne had a tourist information sign as well as this building with collection of hubcaps. Presumably, the collection is growing less now.

It was another 10km along the Champagne old road until I rejoined the Alaska Highway. I figured I would go a bit further and then find a spot close to water and camp for the night. Still early, but this way I would split the ride into two easy segments. At Mendenhall there was sign for B&B/Cabins that were now “closed” and at 90km was a wayside rest area but signs for no camping as well as no water.

However, 2km further the road crossed Stoney Creek. Found a lovely camp site where a side road went up to the creek and set up tent to relax for the afternoon. While I was there three different vehicles pulled up. Folks got out and either filled up water jugs and/or let a dog loose to frolick in the water. Apparently, this is where folks in Mendenhall subdivision get their water. 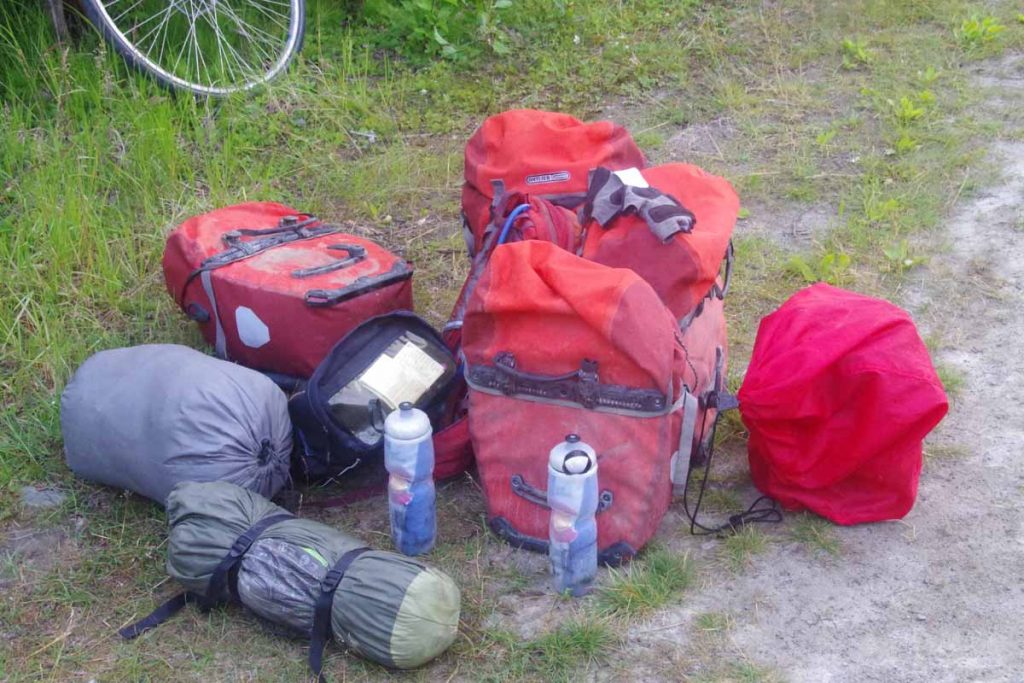 Next morning got my bags together and set off a little past 7am. Right now I’ve got four panniers and am working through how I might reduce things to two panniers for the Great Divide Route. I should be able to do it, but will need to carefully sort through what I’m using and what not.

Start of the morning always seems to go quickly with a lot of energy and fairly quickly rode past the Takhini River Bridge. 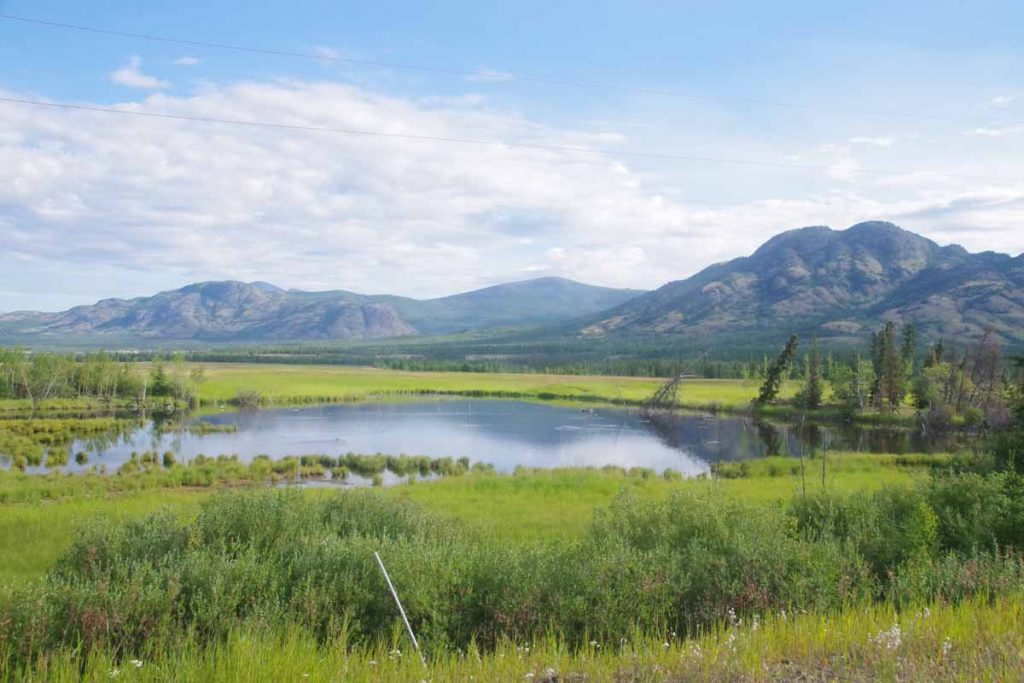 This area has a region known as the Salt Flats where local water has become very alkaline and also a number of small lakes such as the one above. Either the hills increased a bit after this or I my early enthusiasm was wearing less but was getting more tired once I passed the city limits sign. 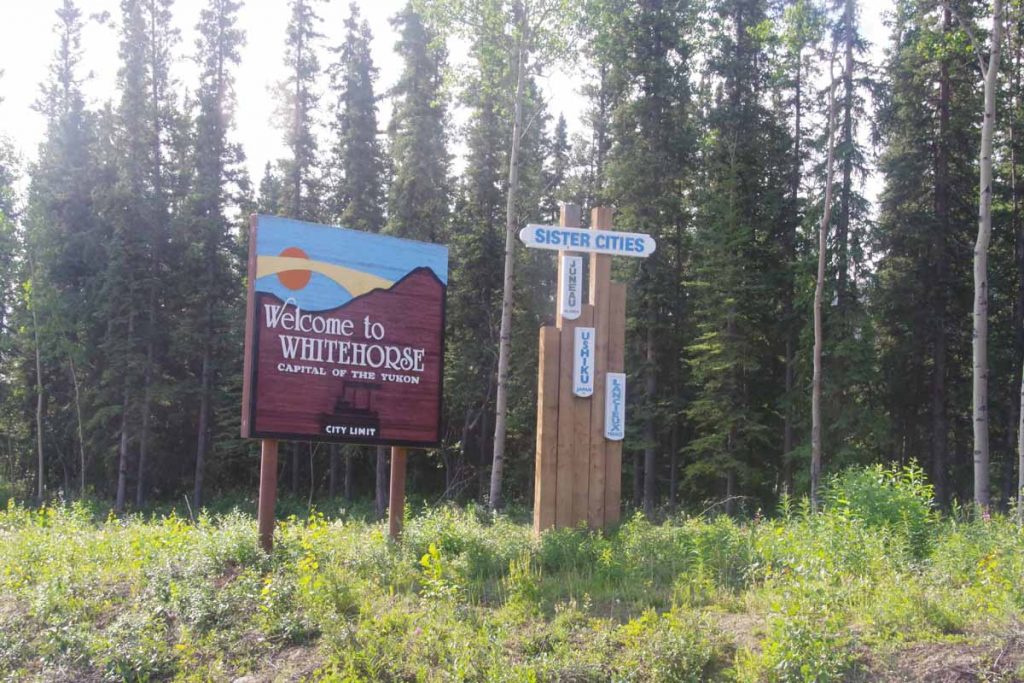 near 45km. However, city limits doesn’t mean city and I had more than 15km to go. Whitehorse struck me as an interesting small/big town. In the next section the town was small enough that they could list multiple signs with services: first the gas stations, then the motels, then the other services, etc. However, this went on for nearly 10km along the road and hence the big part of it.

Without too much difficulty, I got myself into the city center and found a motel. This is the first town in 1000km with a Walmart. 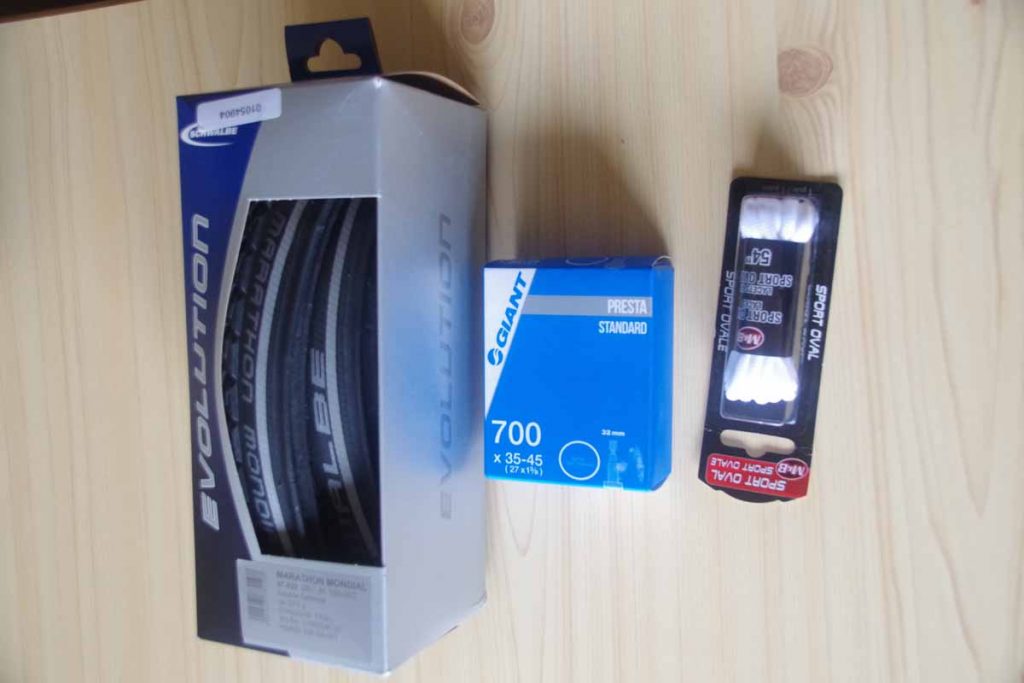 More importantly, I got several key items in my shopping list: a tire, a tube and shoelaces. There are two bike shops in town. 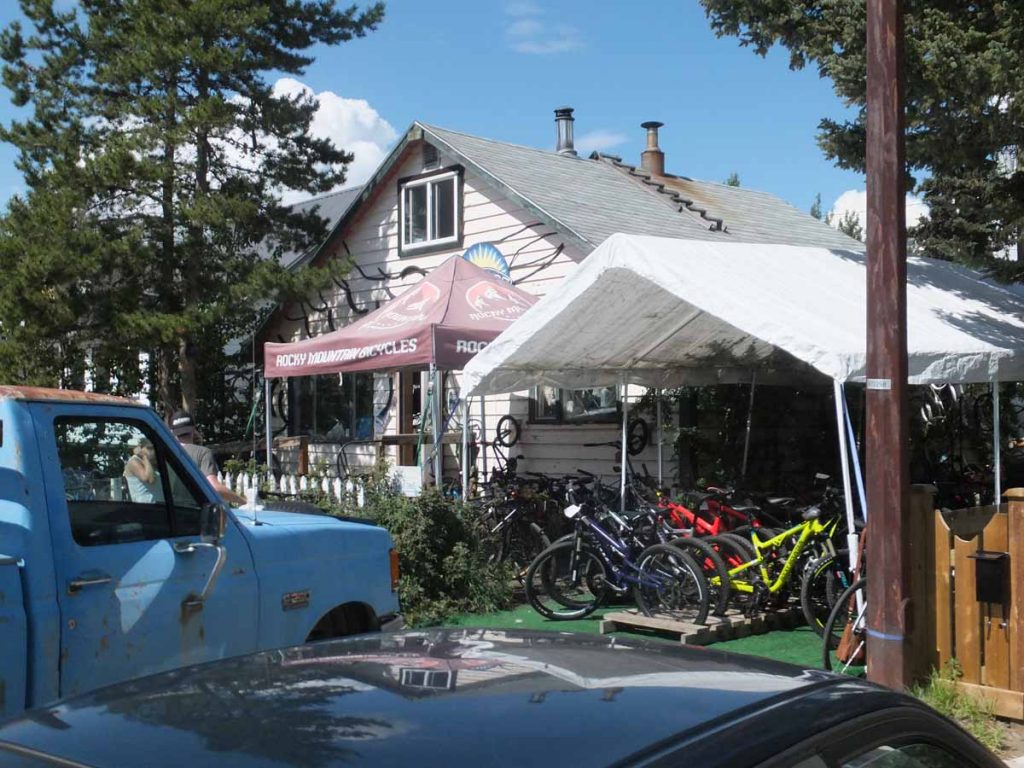 I stopped by both and was impressed that both had reasonable Schwalbe foldable tires. My front tire went flat just as I went to the motel, but plan is to put a new tire in the front, get ride of the one with sidewall tear and use my old front tire as a spare [there will be a quiz :)]. That should last until next town with a bike shop which I’m told is Smithers BC ~1250km from here. 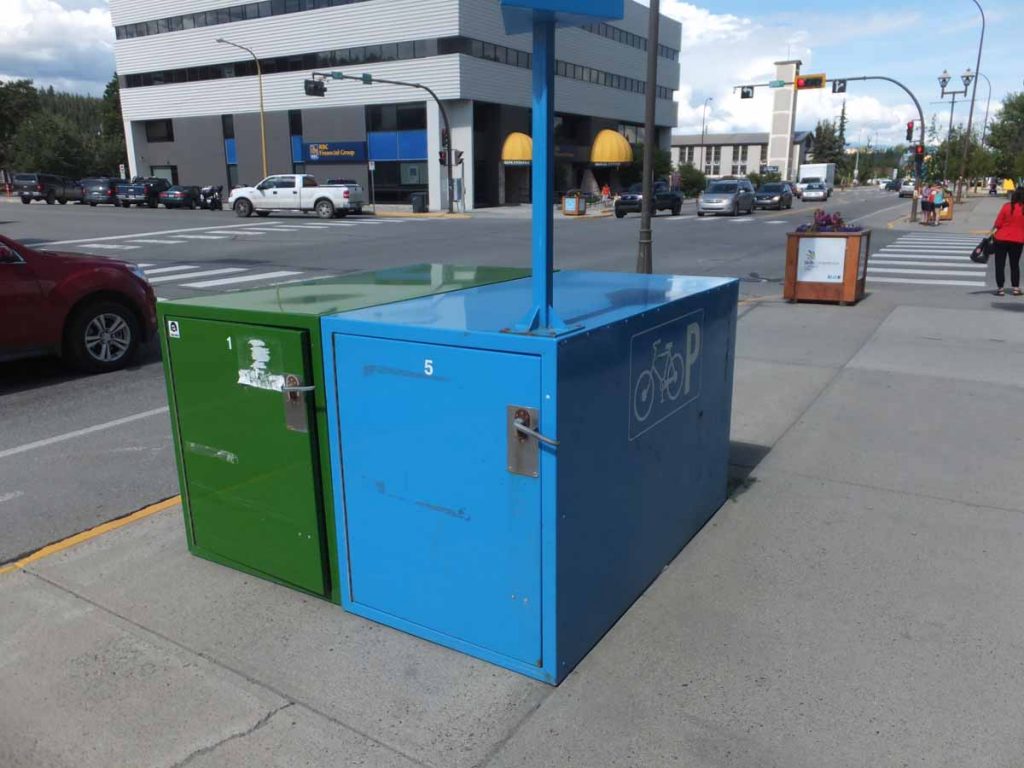 I was even impressed that the town is big enough there are bike lockers to rent and store a bike. I’ve wandered around to the Walmart, past the downtown as well as visited both bike shops. Plan for tomorrow is to take a rest day here and be a tourist before doing the next section to Watson Lake. It is nice being in a big city even if the population is ~25,000 or so.