Today decided to avoid the bike and instead become a tourist. 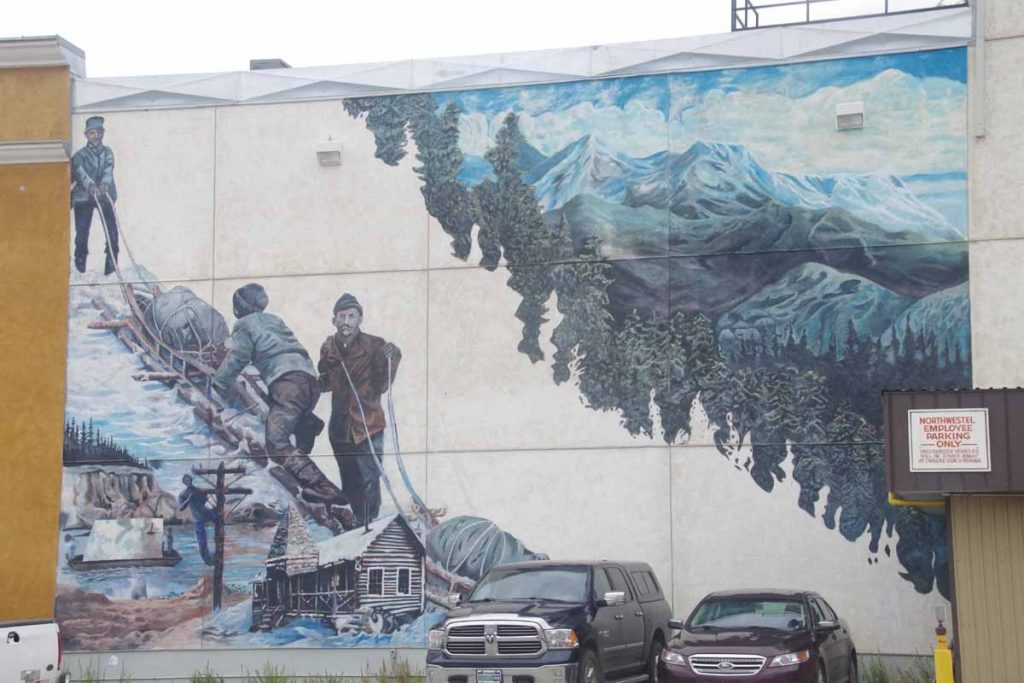 This area has been shaped by several events from the past, particularly the Klondike Gold Rush and the construction of the Alaska Highway in the second world war.

Gold was found near Dawson City in 1896 leading to ~100,000 people “stampeding” on their way to riches and fortunes. Problem was the gold was very remote, ~500km north of here along the Yukon River valley. Steamships going up the Yukon were slow and only could go some of the year. Hence, many of the folks on their way to the gold fields went first to Skagway, Alaska where there is deep water port and then just a matter of climbing ~3000ft over the coastal range, building a boat and floating down the Yukon.

The Canadian RCMP wanted to make sure those traveling had sufficient goods to survive and hence enforced particular limits amounts of flour, sugar and other goods (link from previous bike trip) – the total weight usually totaling to a ton. All of this had to be carried to top of the passes, requiring many trips. By 1900 a railroad was built to top of the pass and then on to Whitehorse. While the largest boom of the stampede was past, that railroad continued to run until 1982 including a particularly busy time in WWII to help construct the road.

By 1988, the railroad was opened back up – but this time for tourists. My goal for the day was to take a tour on the railroad as well as visit Skagway. 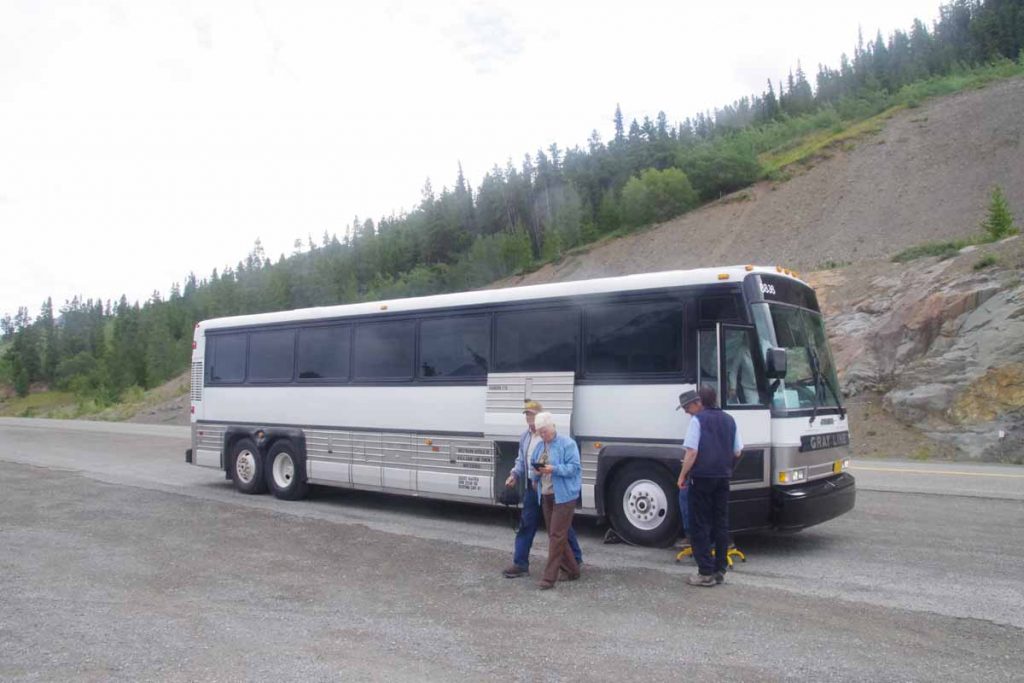 The railroad lines into Whitehorse have been abandoned, so we started with a bus ride. Down the Alaska Highway and then on the Klondike Highway past Carcross where we took a short break. Carcross retirement home shown below. 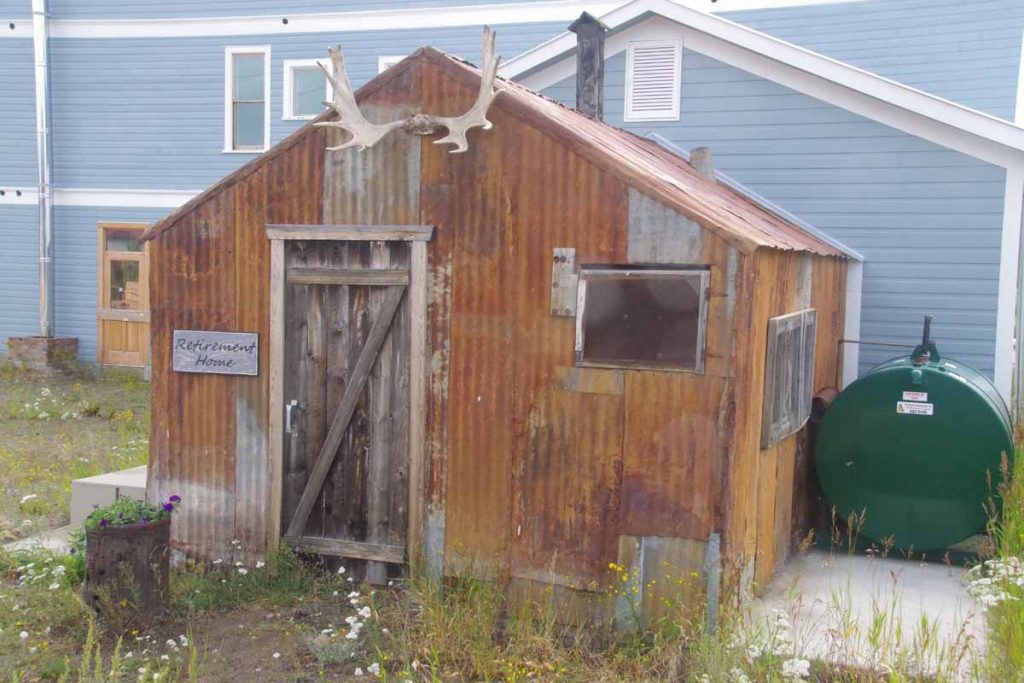 At Frasier we boarded the narrow gauge railroad. This was 27.7 miles from Skagway. 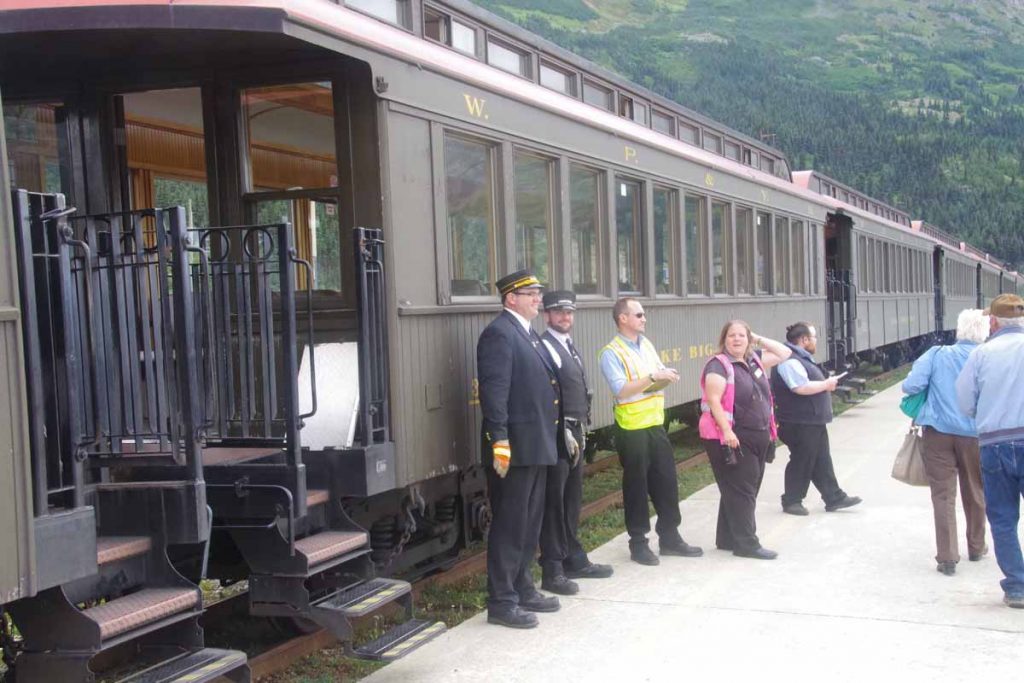 After a short climb we came to the top of White Pass as well as the US/Canada border. Below are flags from US, Alaska, British Columbia, Yukon Territory and Canada. 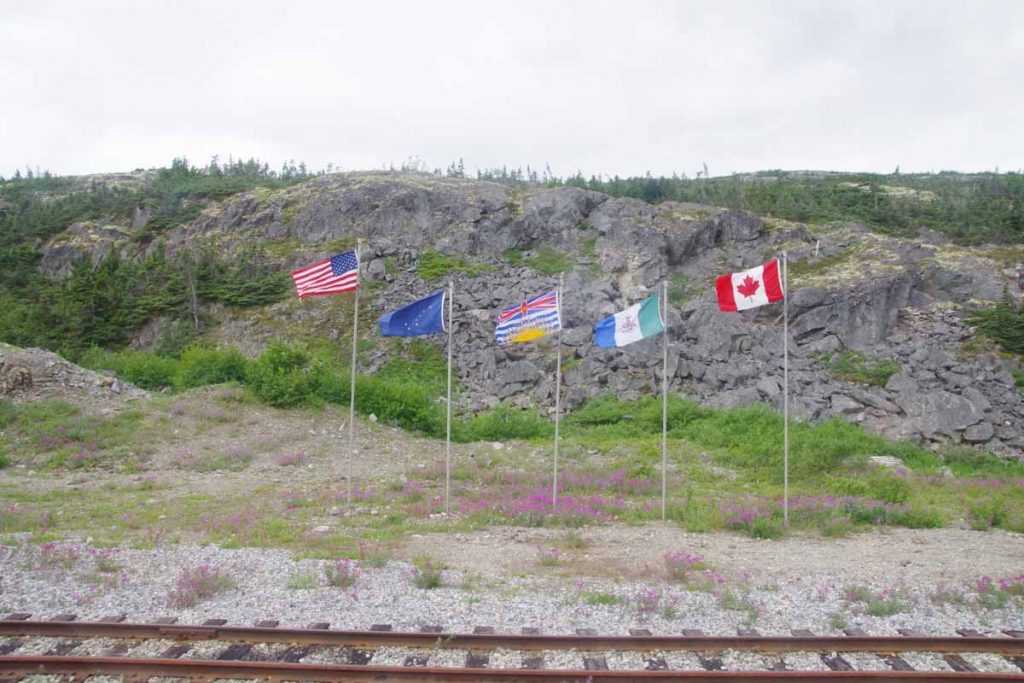 It was a rather scenic ride down the valley. One could see the narrow tracks, steep cliffs and great views as the train slowly inched its way down. 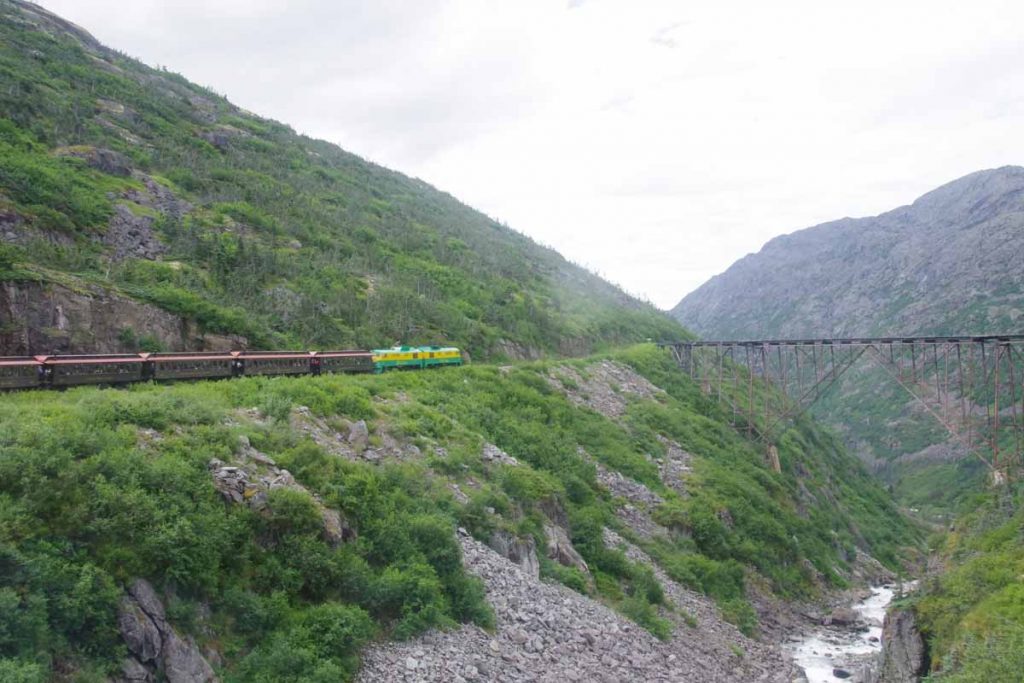 About two hours later we found our way down to sea level and in the town of Skagway. It took a bit to clear US customs and then I was in the town. I think Skagway is a rather strange town. 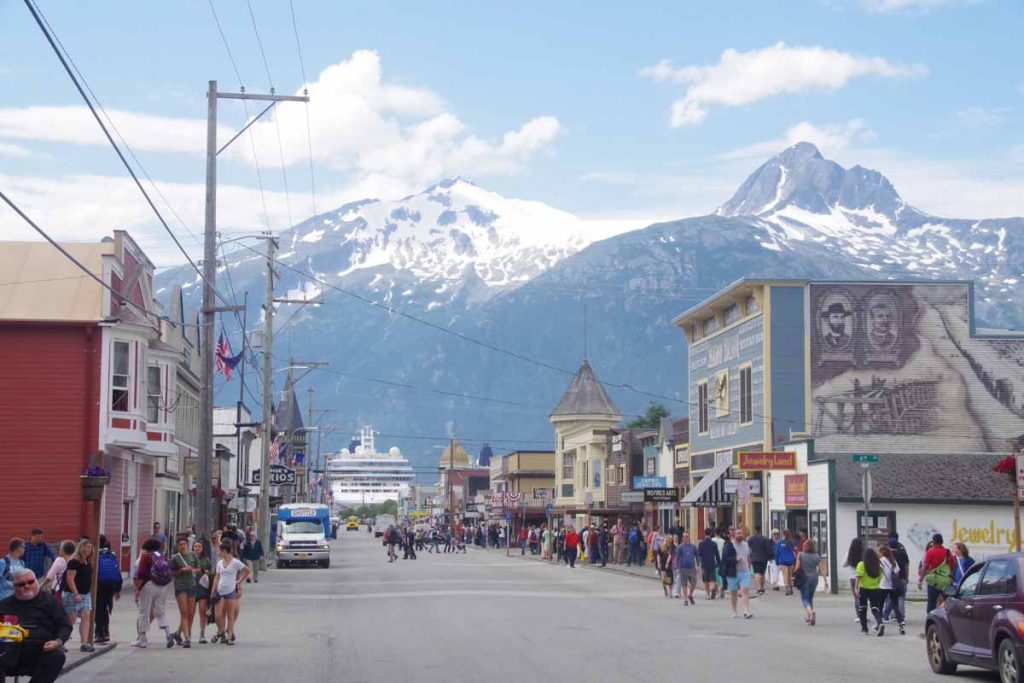 A beautiful scenic location, but also extremely influenced by the ~900,000 visitors each summer that come from the cruise ships that dock in the harbor. As a result, everything in the first eight blocks seems to be oriented towards having these cruise ship passengers get off their boats and buy or do something to get their Alaska experiences or souvenirs. In 2000, I did a cycle trip from Haines to Skagway and then I remember a preponderance of moose towels for sale. 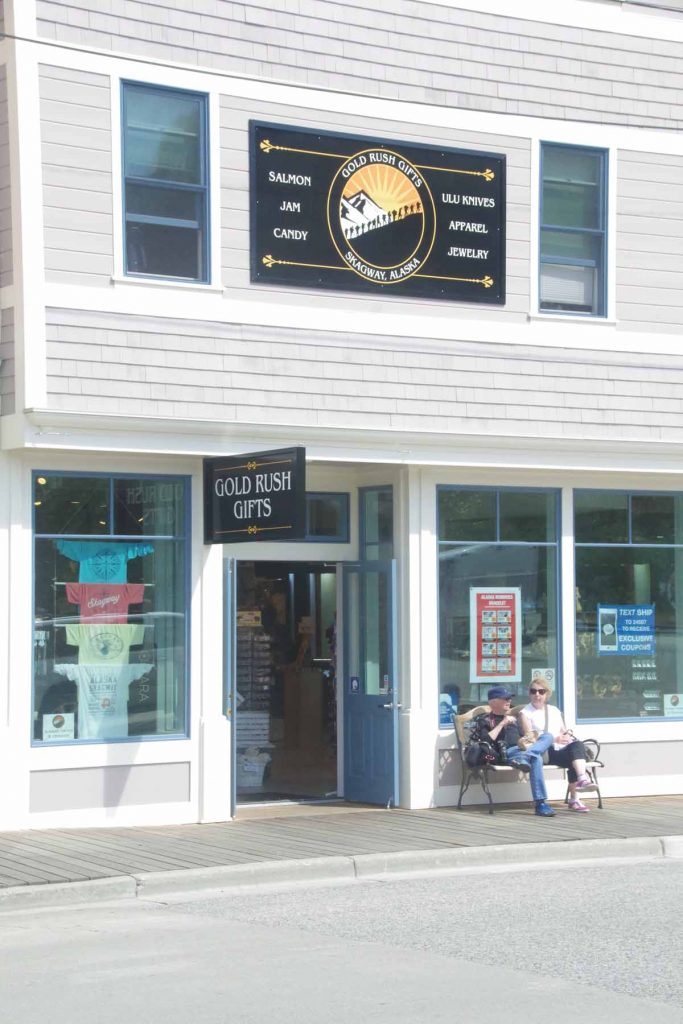 By now there seem to be a number of different things: (a) gold and jewelry (b) T-shirts, hats and other types of apparel (c) food (d) tours or quick experiences, e.g. Sockeye cycle would haul you up the road and let you ride down (e) various knickknacks in the “Alaska” category like towels, magnets and similar. 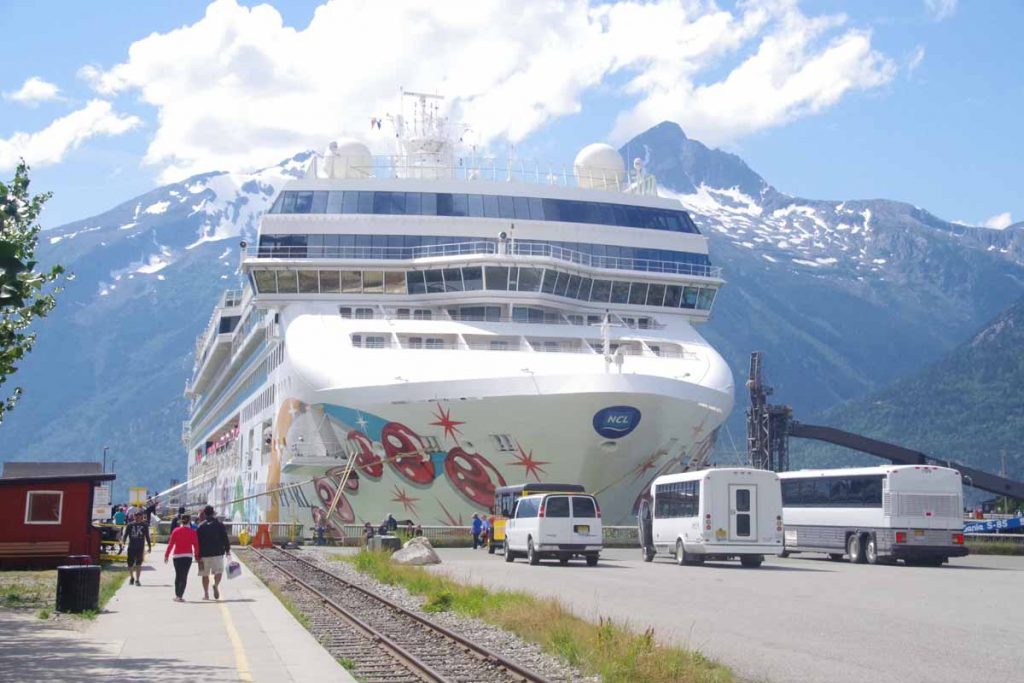 Skagway can handle up to four large cruise ships at a time. Today was a “four ship day”. I was told every other Sunday was a “one ship day” but other days are all busier. Signs on the load streets suggest this madness all lasts from May 1st to October 1st and then Skagway somehow becomes something different. 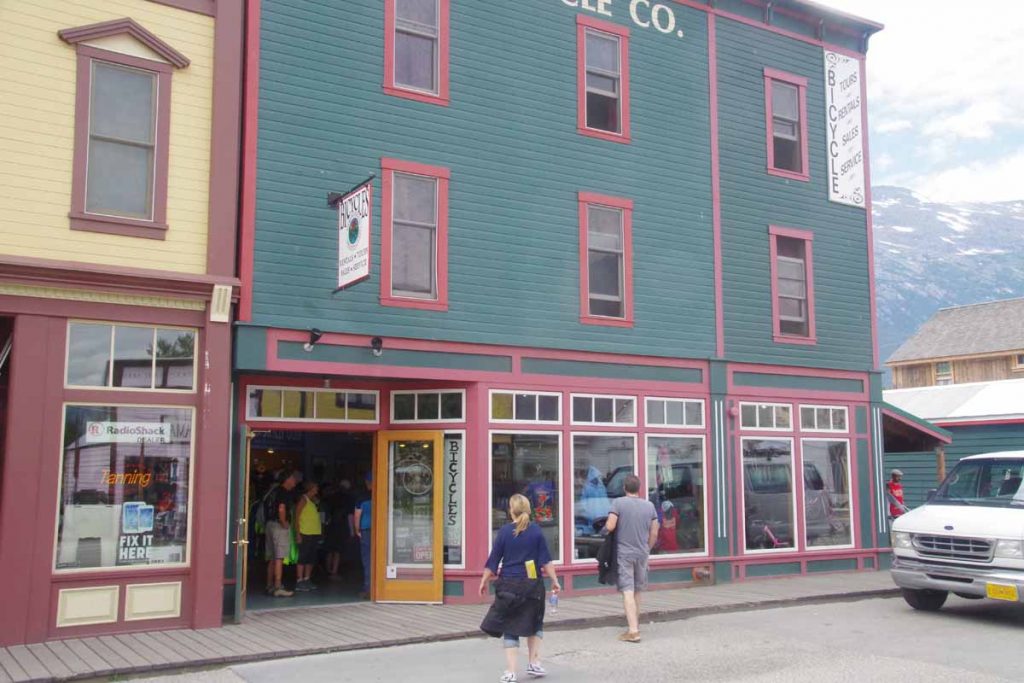 I did find the local bicycle shop (Sockeye cycles) and was able to buy a tube here. A brief bit of background. While today was a tourist day without cycling, I had tried installing a new front tire last night. The tire stayed briefly on and then slipped off the rim, “pow!”. Yikes, hopefully just bad mounting on my part, but I was a bit cautious. I put a new tire back on and partially inflated (30 psi) and made sure all was seated well. This morning before I left, I increased to 50 psi. After coming back from the tour, I went the full 70 psi and cycled unloaded some around town. It does seem to be ok.

However, at Sockeye cycles I was able to get an extra tube and also noticed they sell good 700x35C Schwalbe as well. 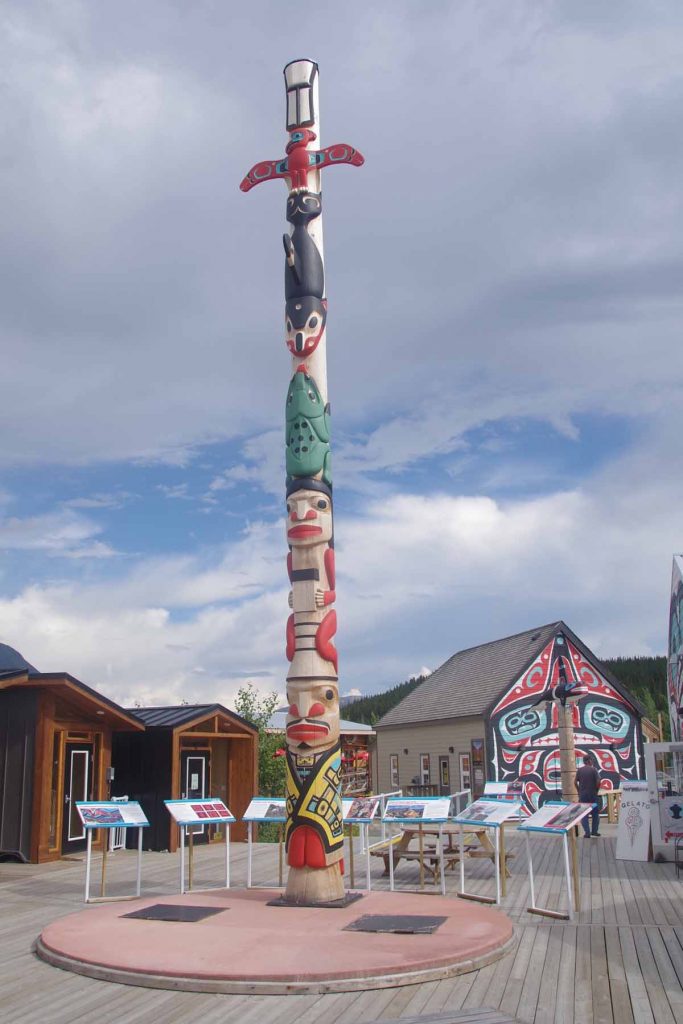 On the way back we stopped briefly in Carcross and then back into Whitehorse. Too late for local sport shops to be open, but there is a large Canadian Tire store that seemed to have most of what I needed. Overall a fun and different day as a tourist.

Tomorrow will pack up and back on the road. Expect approximately five days from here along the Alaska Highway to reach Watson Lake (two to Teslin and three from Teslin to Watson Lake).