Two days cycling brought me from Lander to Rawlins. Wyoming is often windy and on second day we had a front come through the might have increased that wind.
Day One
My description for the first day was “26-6-26”. This meant 26 miles of gently rolling hills, followed by a 6 mile climb, followed by 26 miles of mostly flat. 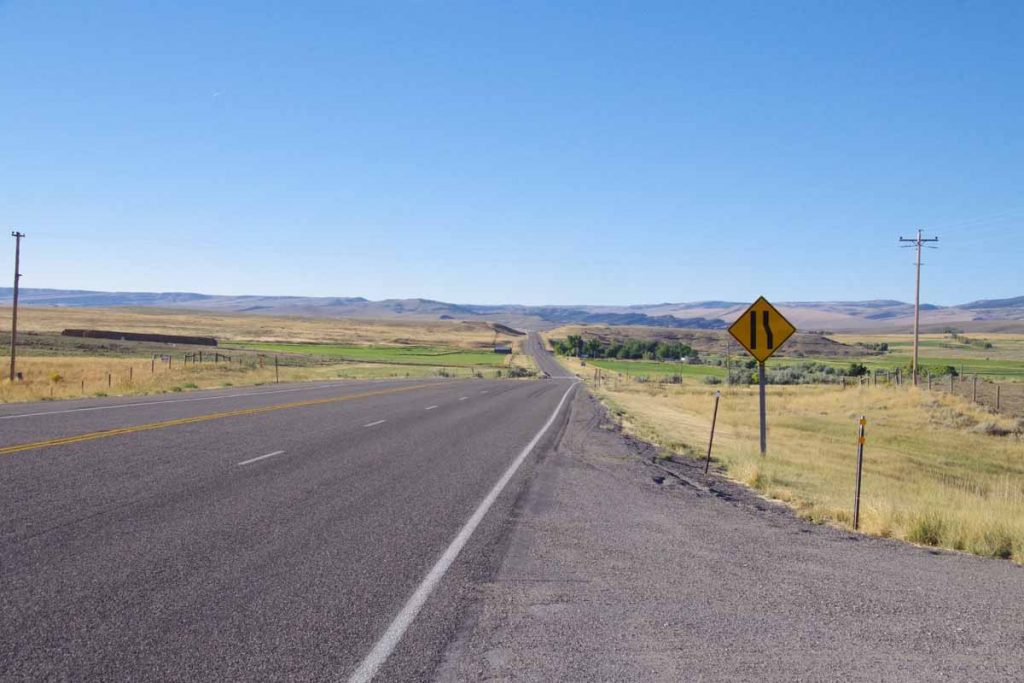 Riding started out well, here is an example of one of those rolling hills. 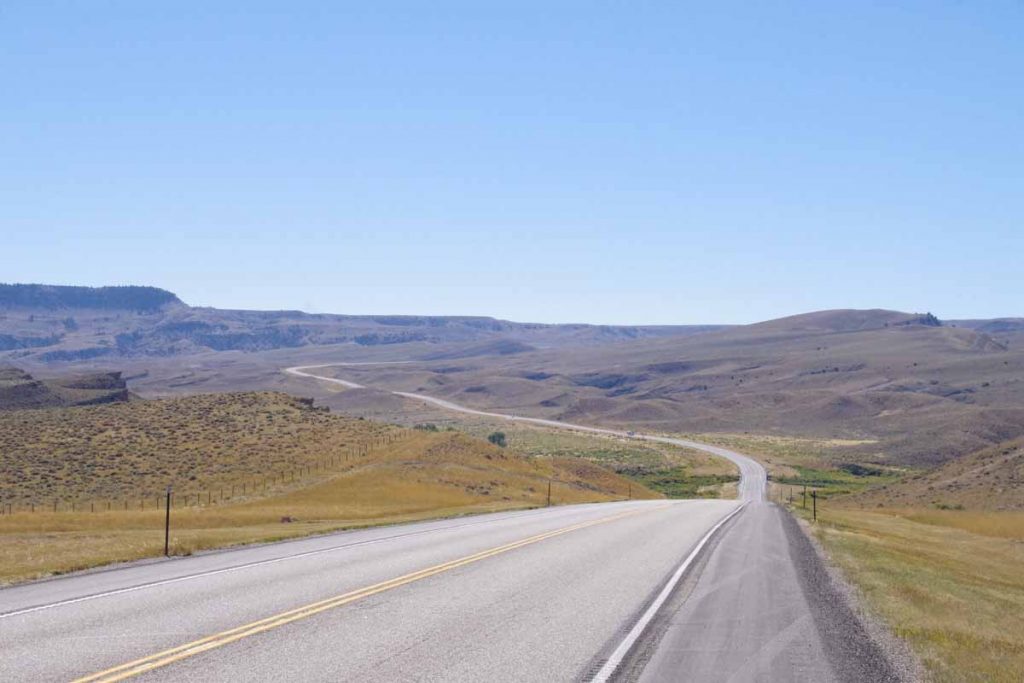 After 26 miles, I came to the base of the “Beaver Divide”. This was a steady climb that gained ~1100ft. By now, the wind was starting to pick up and during the climb there was some cross-wind as well as small bits of head wind. However, without too much trouble I slowly made my way to the top. 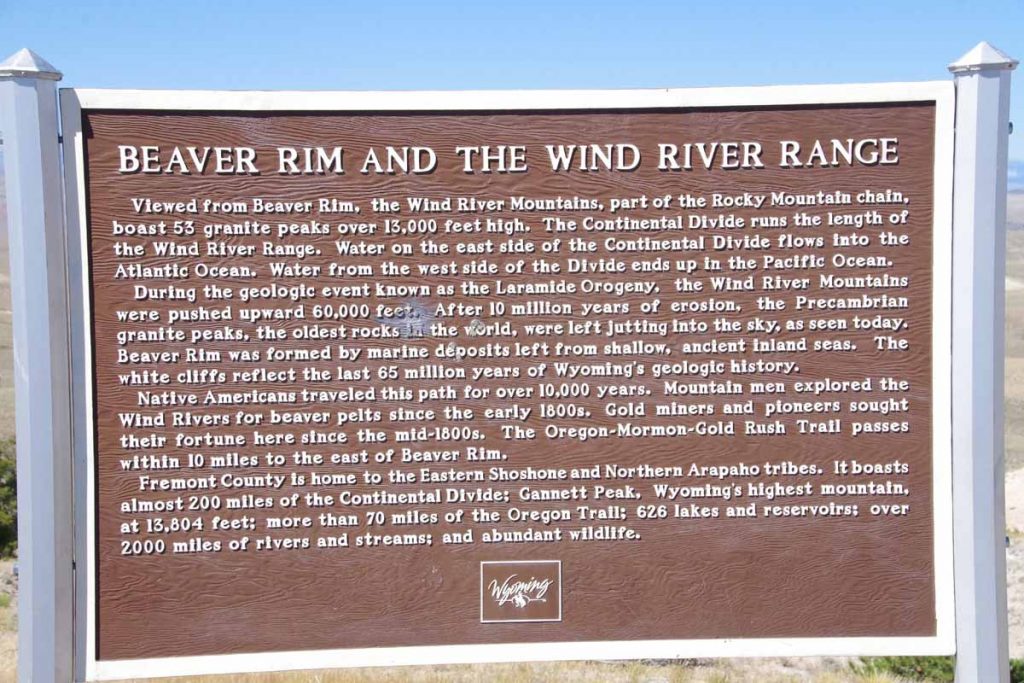 Here is the description of the Beaver Rim 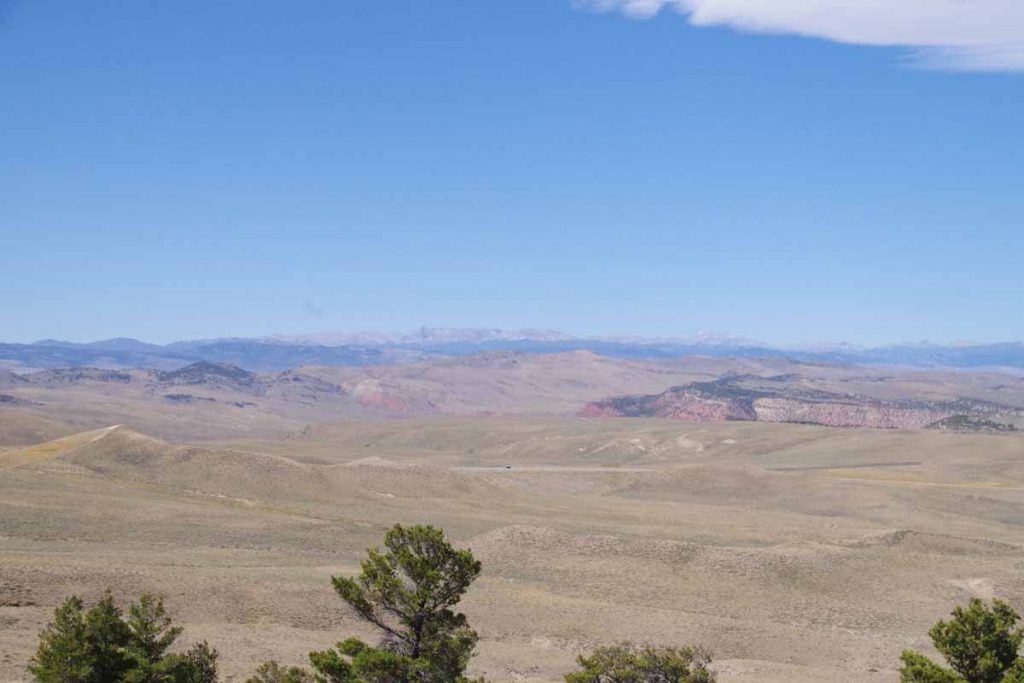 Along with the view from the top. Tough to see in the distance, but believe Togwotee Pass is off there in the distance. By now the wind had definitely picked up and it was mostly a tailwind. 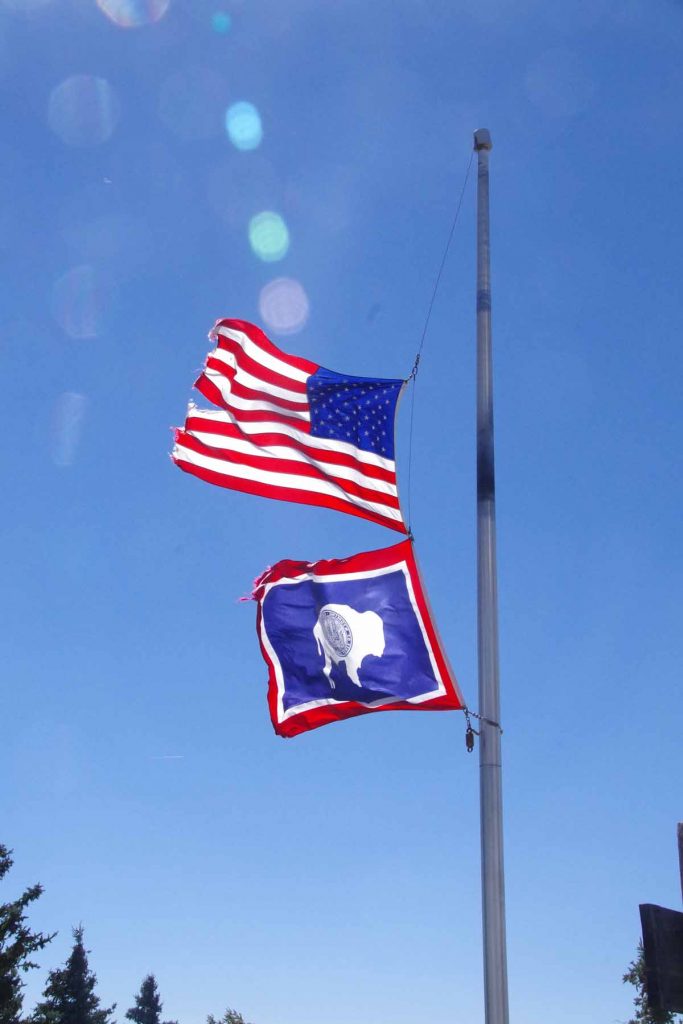 Six at 38 miles was a rest area. I ate my lunch items inside out of the wind. While I didn’t stop in (it was Sunday), there was also the Mormon Handcart historic site nearby.

From what I’ve read, (wikipedia), some of the Mormon pioneers made the journey to Utah pulling handcarts. At this location, two handcart companies encountered early snows and a number of people perished. Just cycling this route on smooth pavement, one definitely gets a sense of how difficult it must have been to have walked through this area pulling a cart. 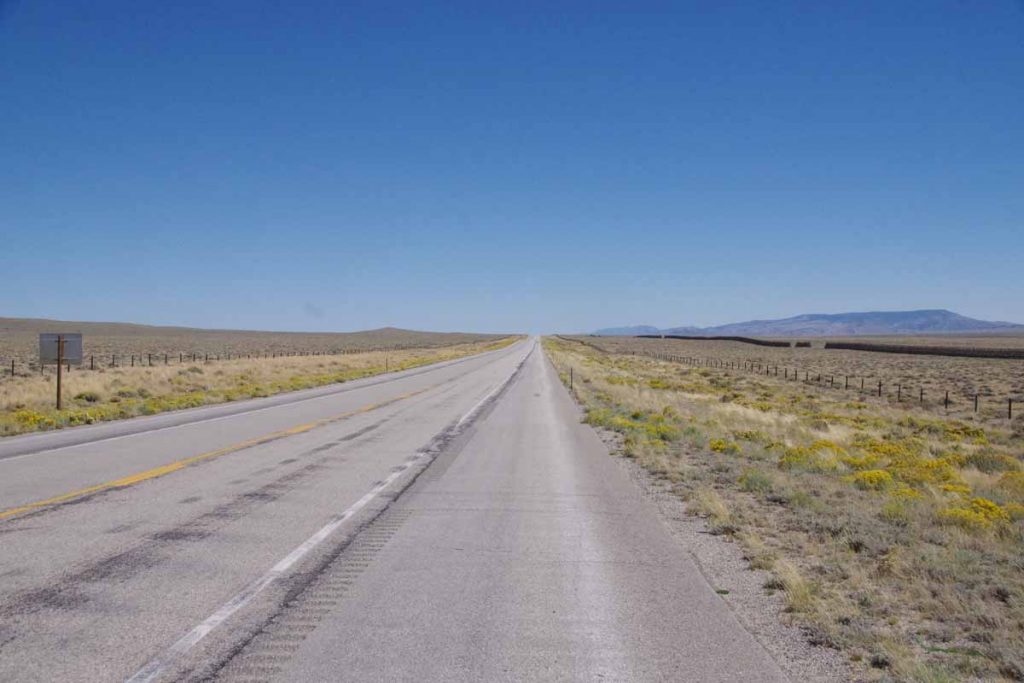 The last 20 miles were open riding with a good tailwind. 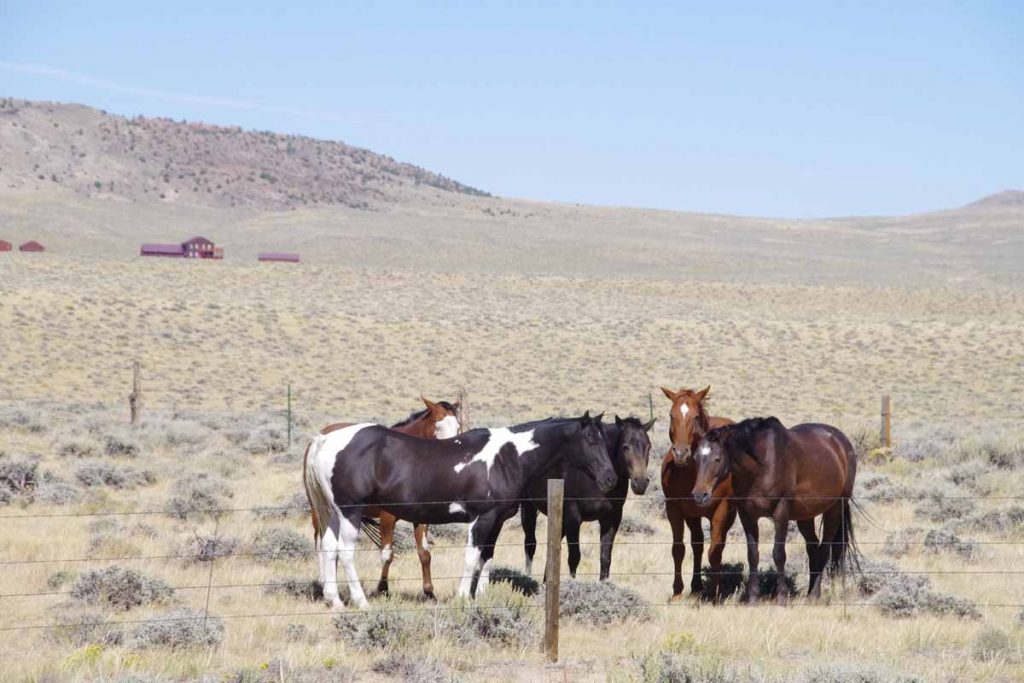 The horses seem to congregate when there is wind.

This brought me to Jeffrey City. Jeffrey City had once been a booming uranium mining town with several thousand people. About 95% of the people left and one can see some abandoned buildings from the road. 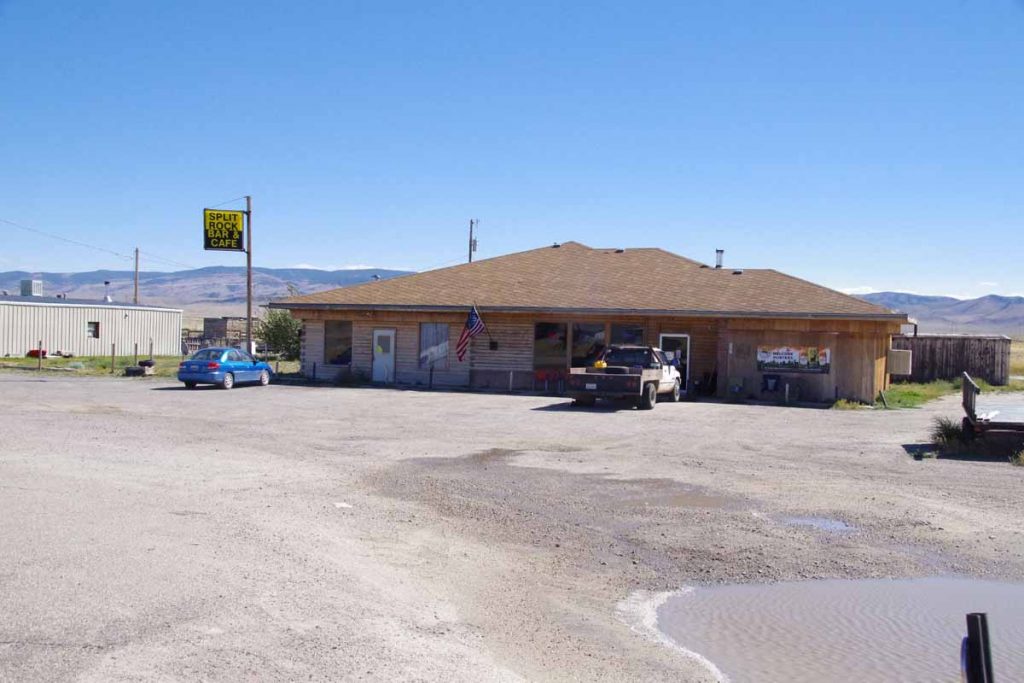 The Split Rock Cafe and Bar seems to be a center of what is left. I stopped in for a late lunch. 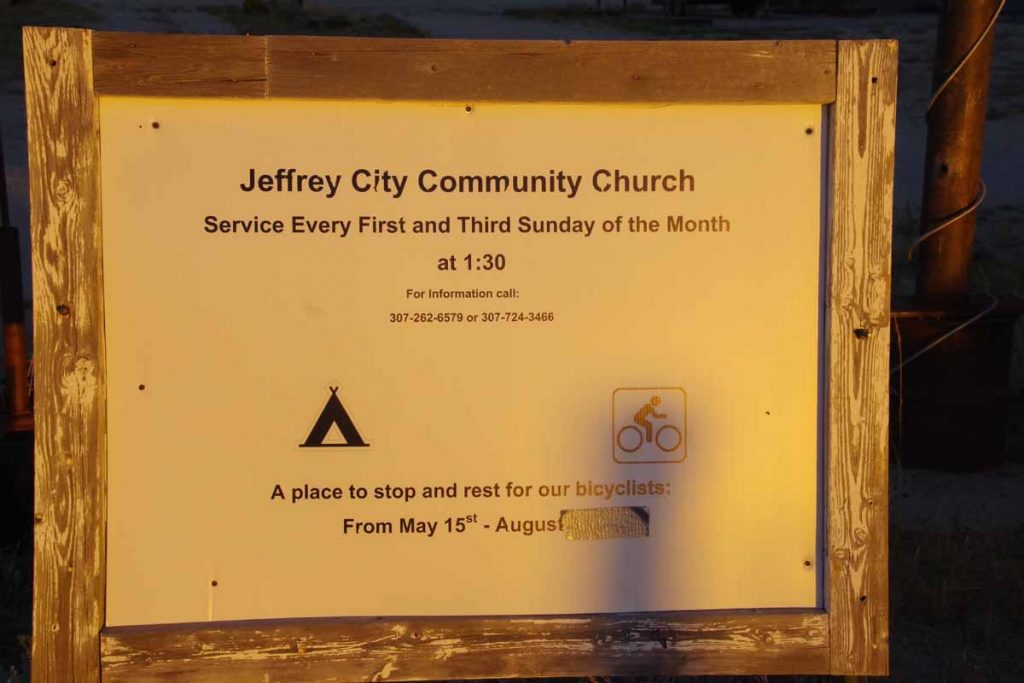 This community also has reputation of being very welcoming to cyclists. Sign above pointed to the Community Church a little ways away. 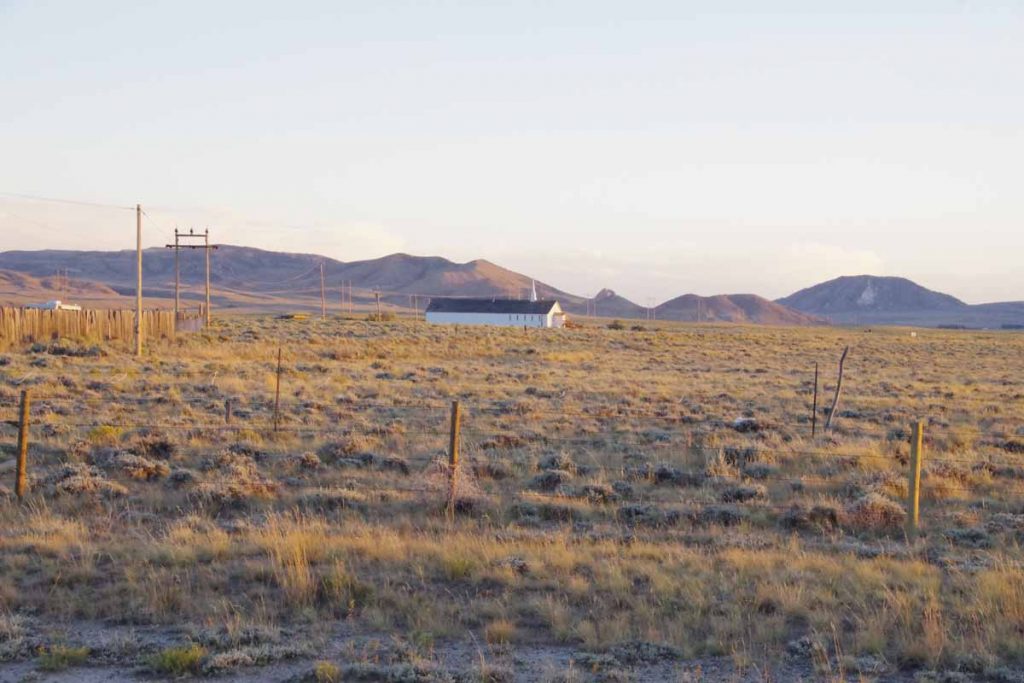 Both the church and the pottery building will let cyclists camp. Later in the evening I talked with the pottery dude. He had bought an old gas station some years ago for $5000 and now makes and sells pottery. He realizes he won’t see much pottery to cyclists, but still gives them cookies and has a spot on the Adventure Cycling maps offering behind his store as camping place.

He also pointed out to me that Jeffrey City had won a June Curry award from Adventure Cycling for being such a welcoming community after the local motel had shut down. 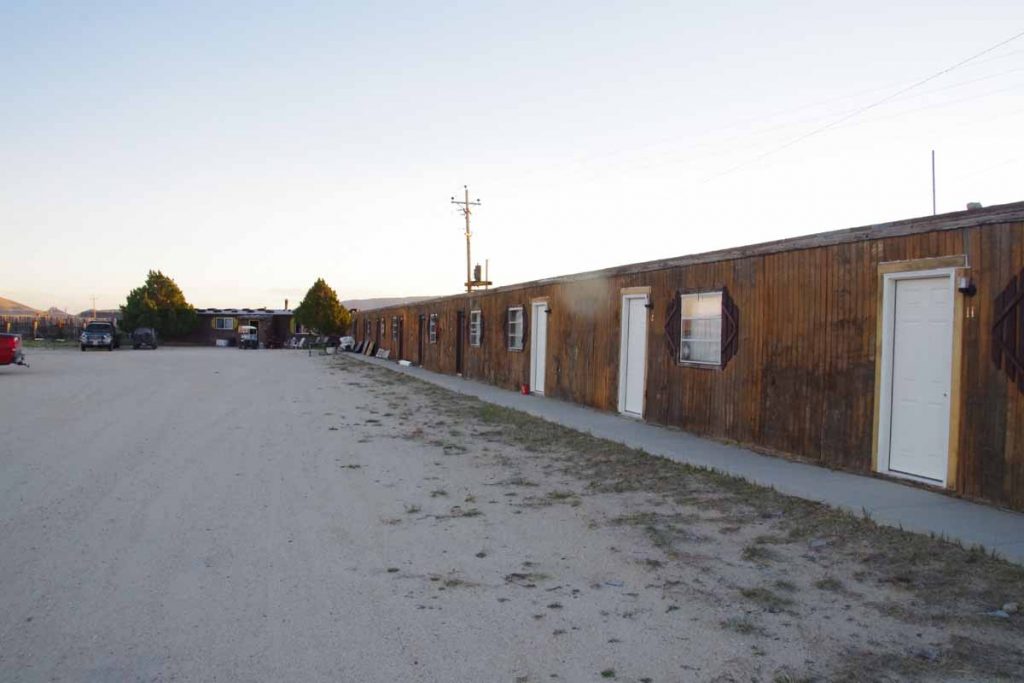 While the motel has reopened (and I stayed there), I definitely got a sense of welcome hanging out in the Split Rock cafe and talking with folks.
Day Two
The wind howled through the night as the front passed through. I knew it was shifting from SW (tailwind) to NE (headwind for 1st 23 miles) so somewhat concerned of how difficult the day might become. Fortunately, by 7am the wind had lessened. I had a breakfast at the Split Rock cafe and then set out into the wind. 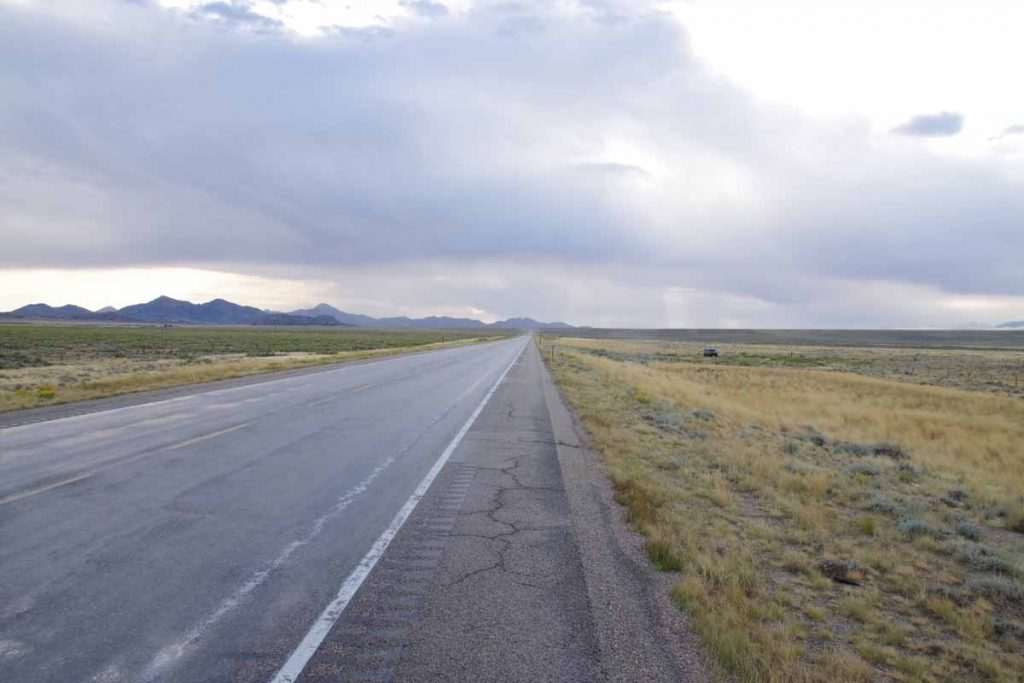 It was much colder and there were some drops of rain. This made for slow steady slog. 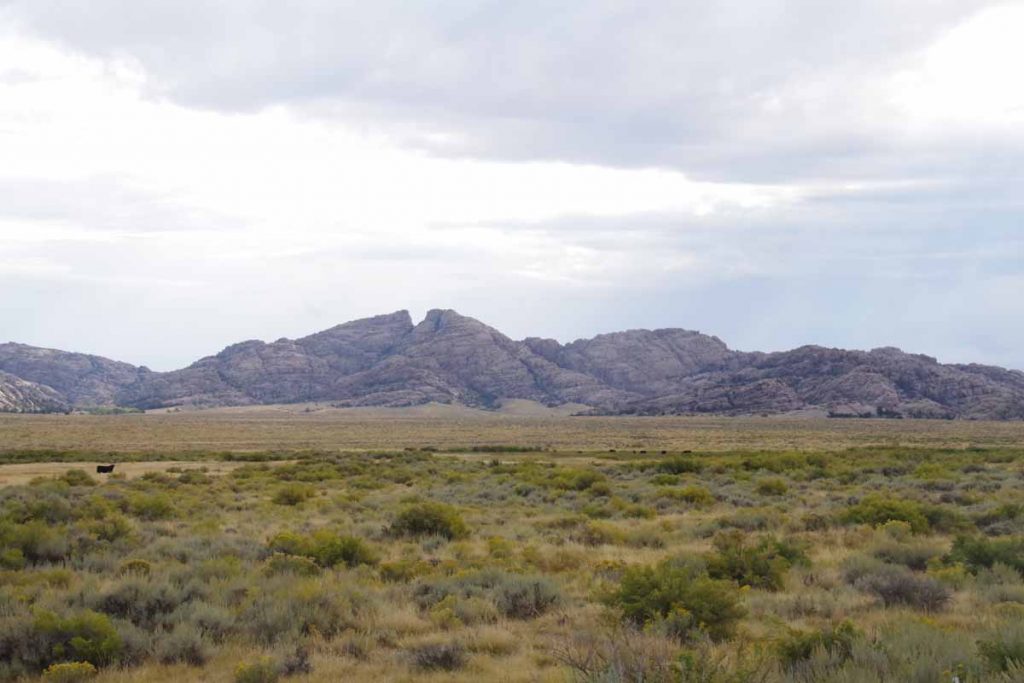 After 15 miles I came past Split Rock. 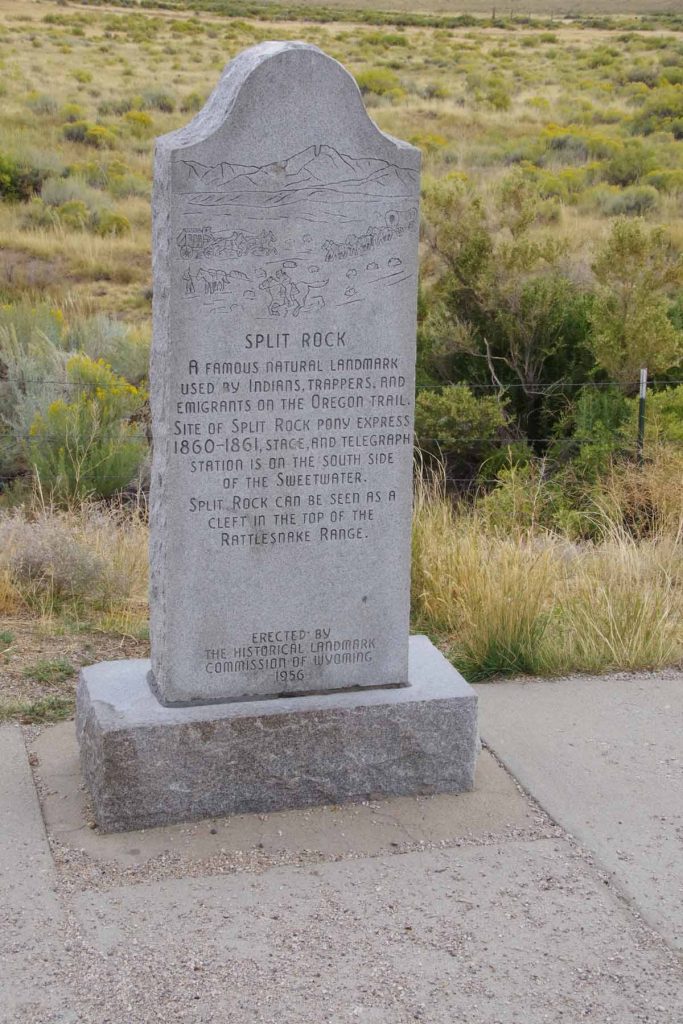 Here is the description.

After 23 miles, I came to the Muddy Gap junction. The temperature had dropped to ~3C (37F) and last bits had some head wind. Fortunately, it warmed up significantly from here and the road also changed to have more tail wind as I went through muddy gap. 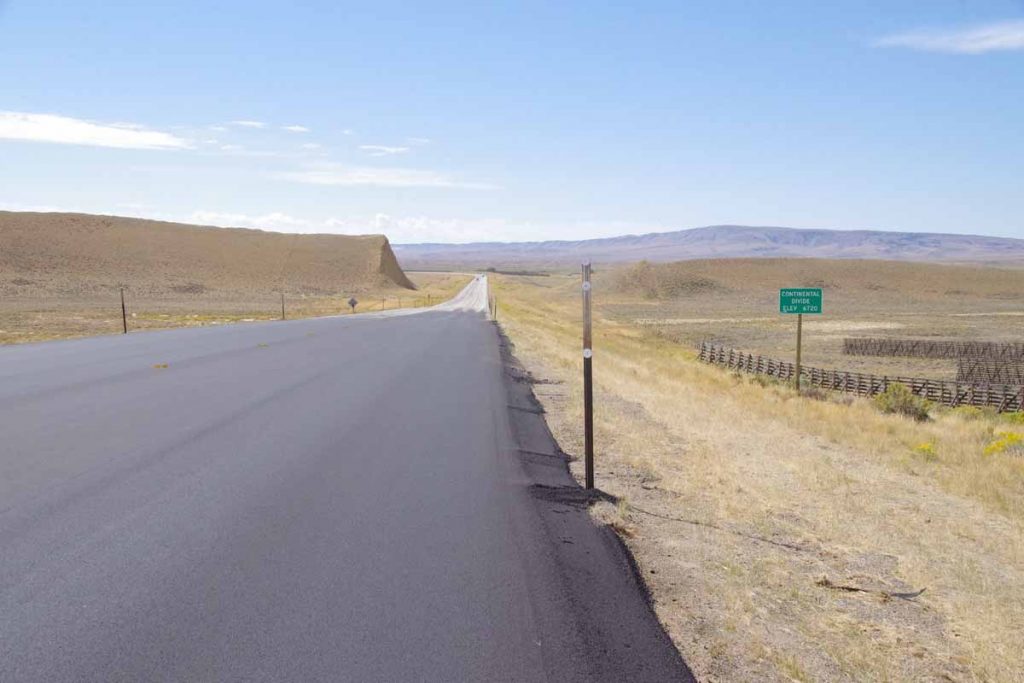 I crossed the continental divide to a region known as “Great Divide Basin”. There isn’t much precipitation or water in this basin and the water that is there evaporates rather than going to either Atlantic or Pacific. 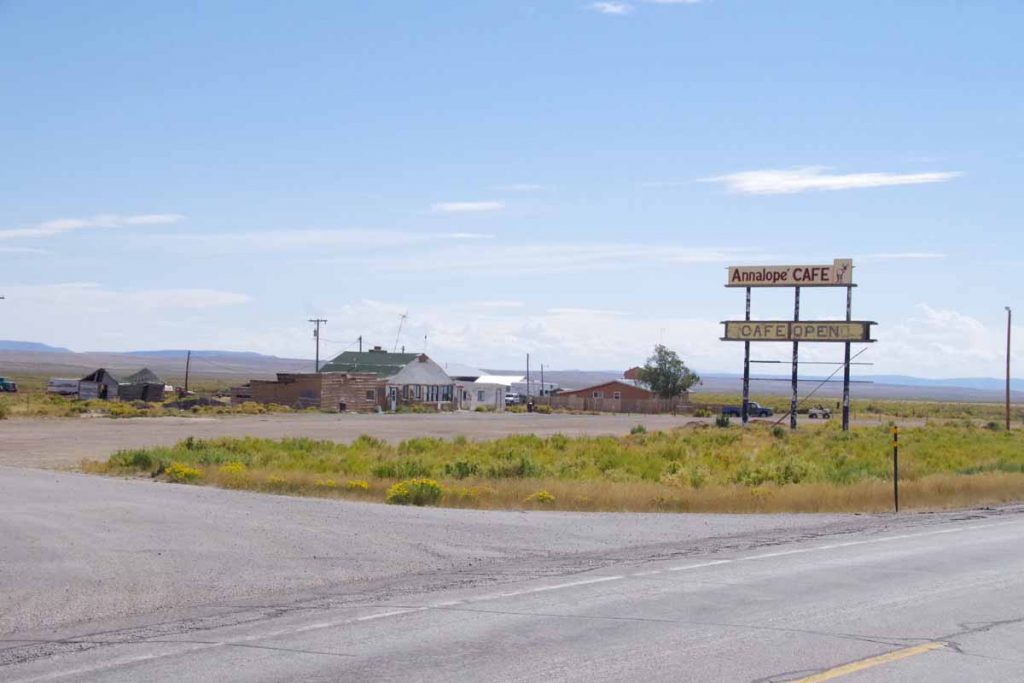 Despite the sign, the Anna-lope cafe in Lamont was not open. 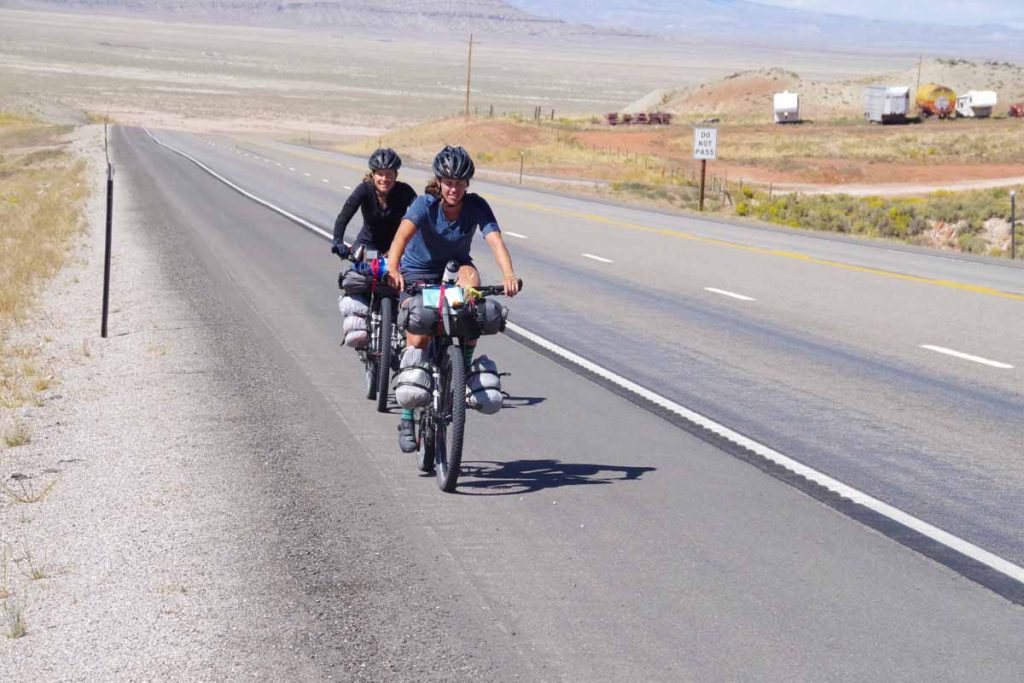 I have been following the “Transamerica Trail” which goes from Virginia to Oregon. However, the Great Divide Mountain bike route also rejoined here for last 15 miles into Rawlins. These cyclists had started August 8th in Banff and were doing the Great Divide. 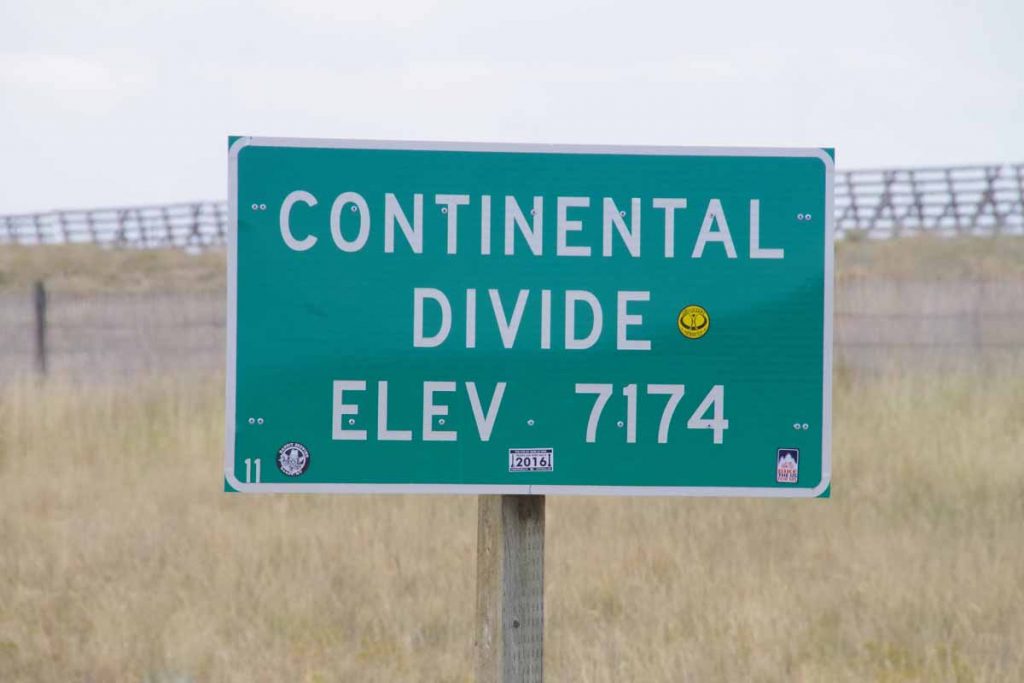 Not much later, I crossed the continental divide and left the Great Divide basin. The last miles into Rawlins were fast as they were downhill and down wind. Yeah! Overall definitely had some strong winds the past two days and also good sense of hospitality at Jeffrey City.