Two days riding has brought me to small town of Acaponeta

Day One
First day cycling on mainland. It is warm and a little more humid today. Fortunately, I was able to finish riding by early afternoon. 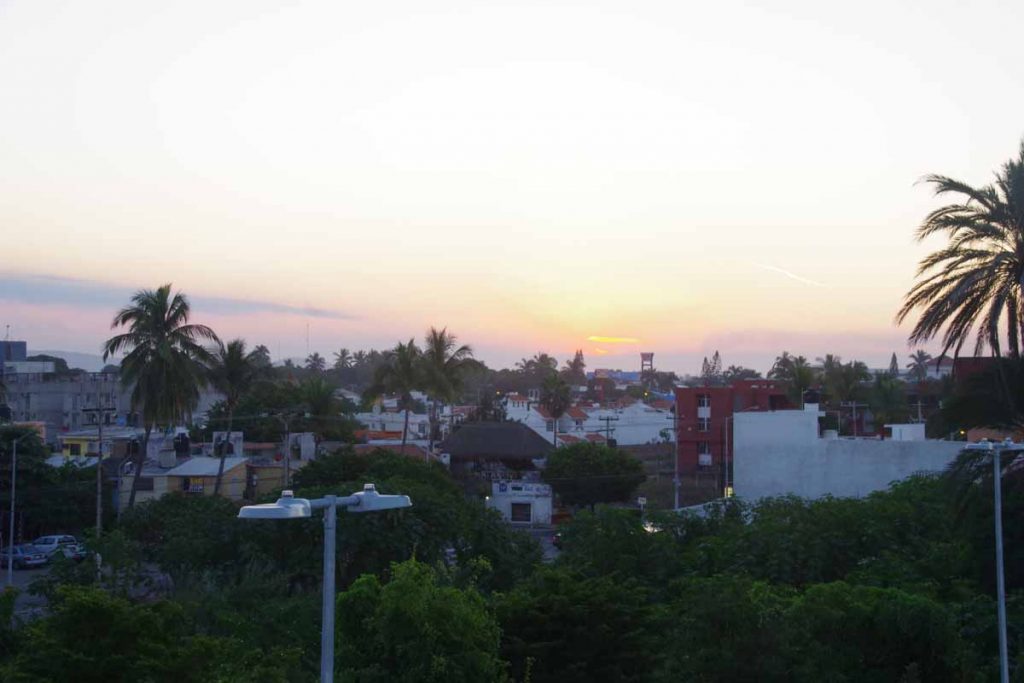 The hotel started breakfast at 7am, but I skipped it to get a chance of riding in early morning cool air. Glad I did as there wasn’t much traffic the first 5km that I worked my way through surface streets of Mazatlan. After this point, I was on the main road 15. 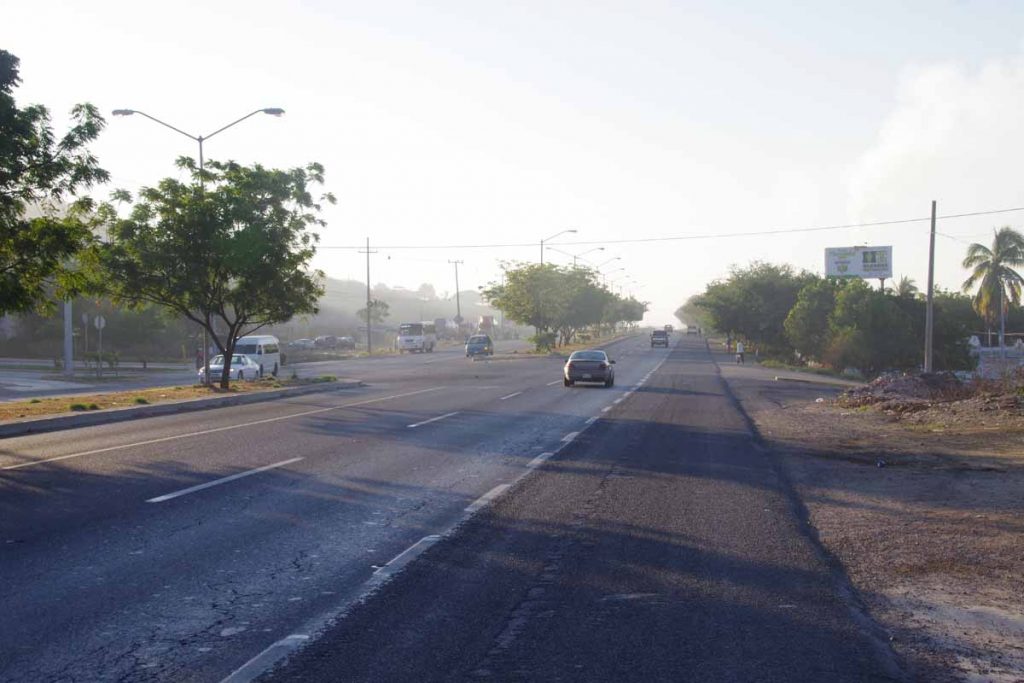 The next 20km were along road 15 and were better than reports I had read. There was pretty much a shoulder all the way, except for when vehicles parked there. I had some dogs give chase and one bit a pannier, around the airport – should have kept my bear spray :). Other than excitement was fairly quick to ride to 25km and through small town of Villa Union. 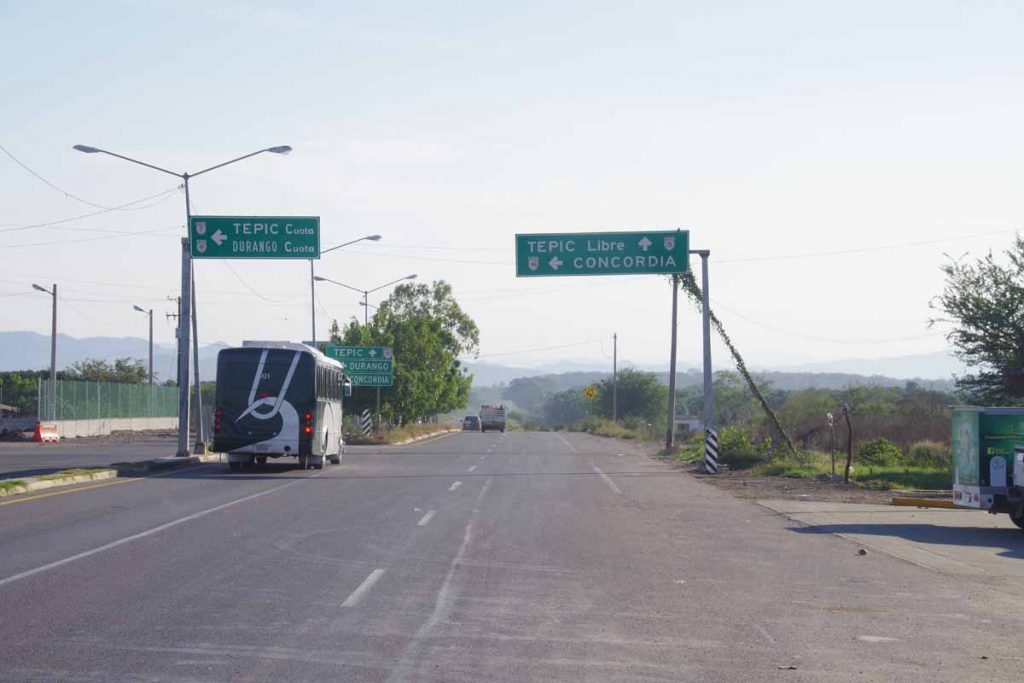 At this point, there is a choice to take either the “libre” or free road or the “cuota” or toll road. After reading several cycle journals, I knew:

Based on those tradeoffs, I decided to start with the toll road today. 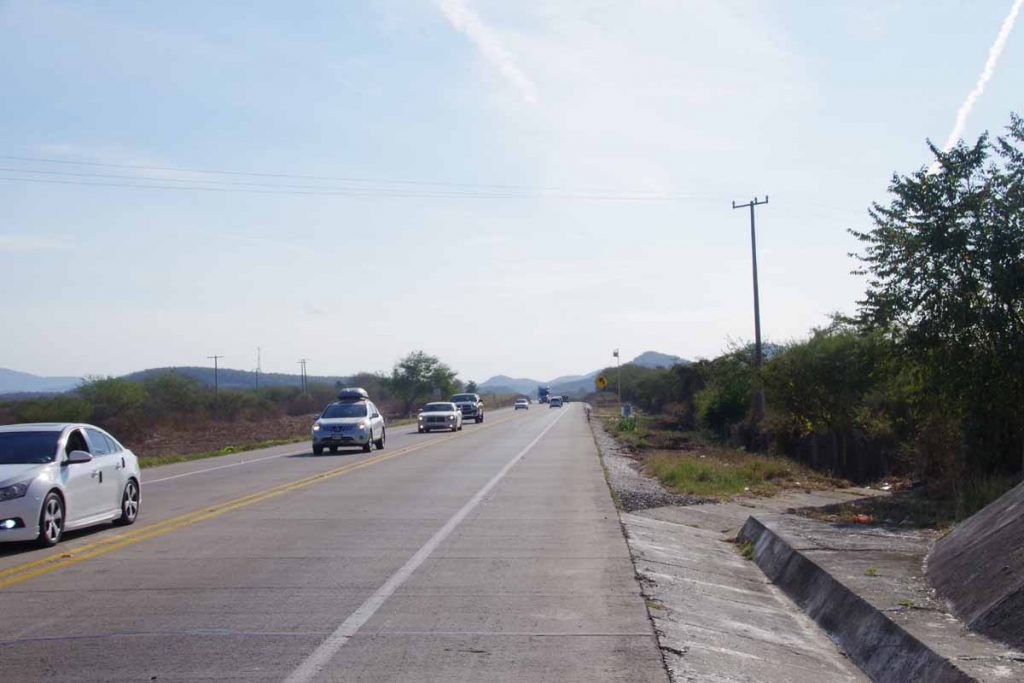 It was reasonable riding the toll road and I definitely liked having a shoulder. 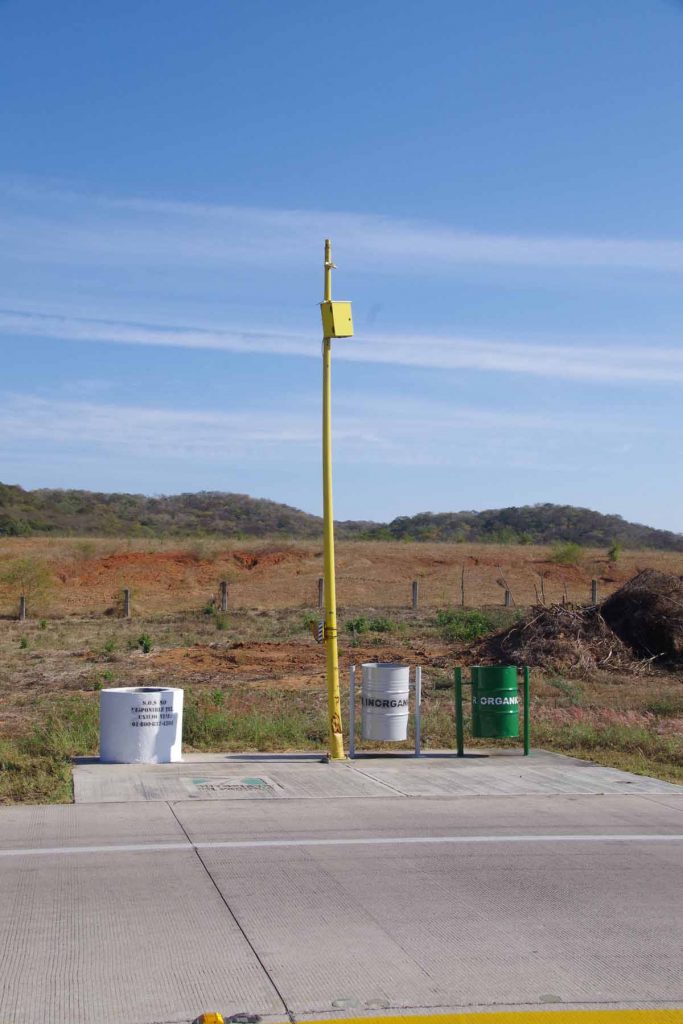 There were a number of these emergency posts. They have a phone (yellow pole), a bin for organic waste (green), a bin for inorganic waste (grey) and a container for water (white). The water had scum on top and not drinkable, but likely useful for radiators and the like. I didn’t try my trick of dumping water over my back to cool off. 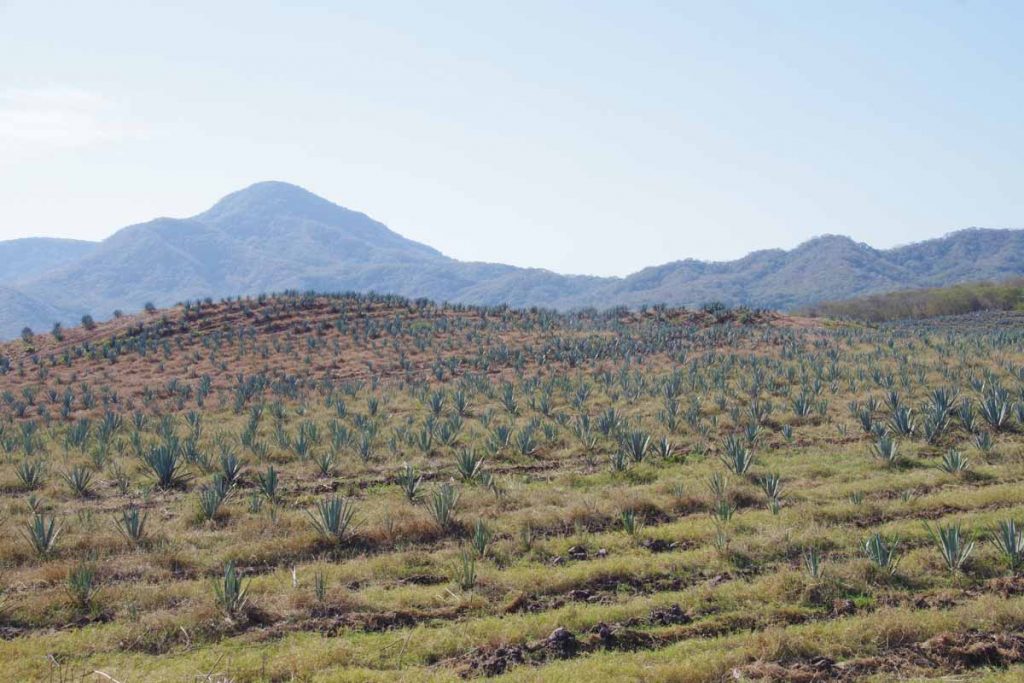 This was a more tropical area and also with some farms. Not sure what these were, but were nicely placed in rows.

At 68km I went through a toll gate and at 69km was a brief rest area where one could buy drinks and snacks. Also good chance to cool down as it was starting to get warm. 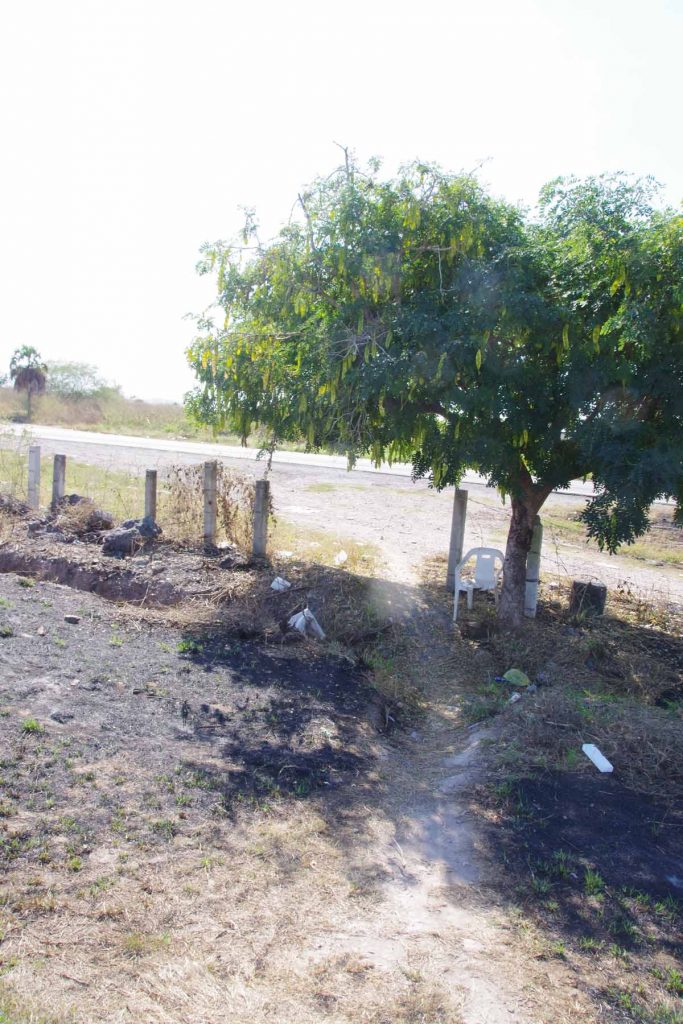 At 79km, I saw this break in the fence at a point where libre and cuota were running side by side. I skipped through the gap and onto the free road for the last bit. This was both because the cuota was longer and because I expected to come past hotels on the libre road.

It was another 11km, and I found myself in town of Escuinapa. 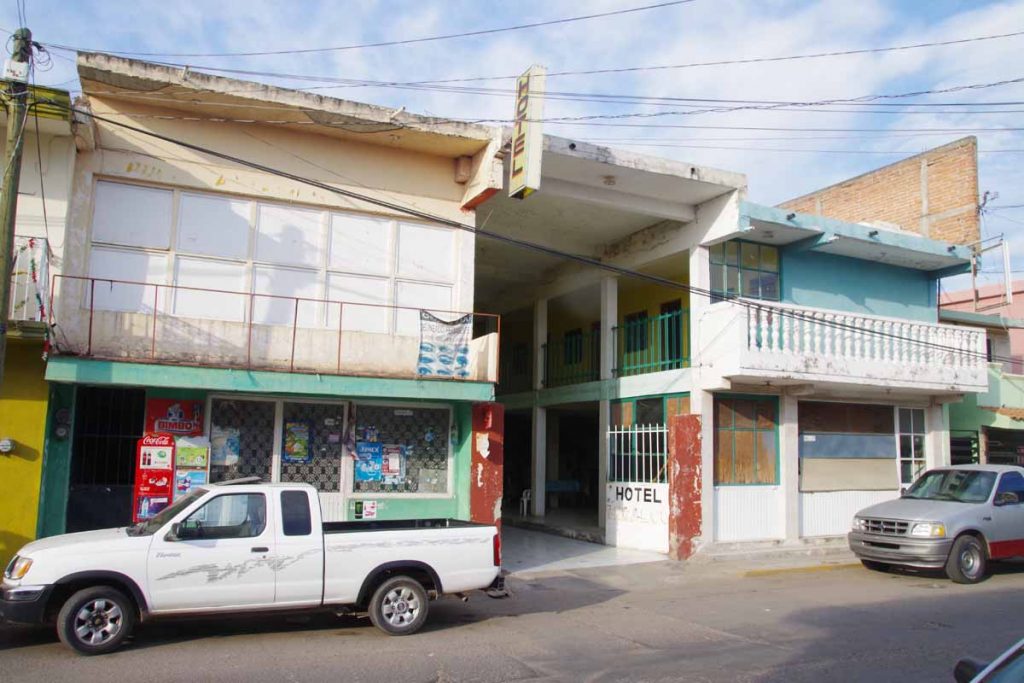 The road split into one way. Google Maps had indicated a hotel but I couldn’t find it. I did find this other hotel shown in photo above. A room was only 150 pesos. Nice place to rest. No wifi and no blankets on the bed and not the cleanest but it had a locking door. 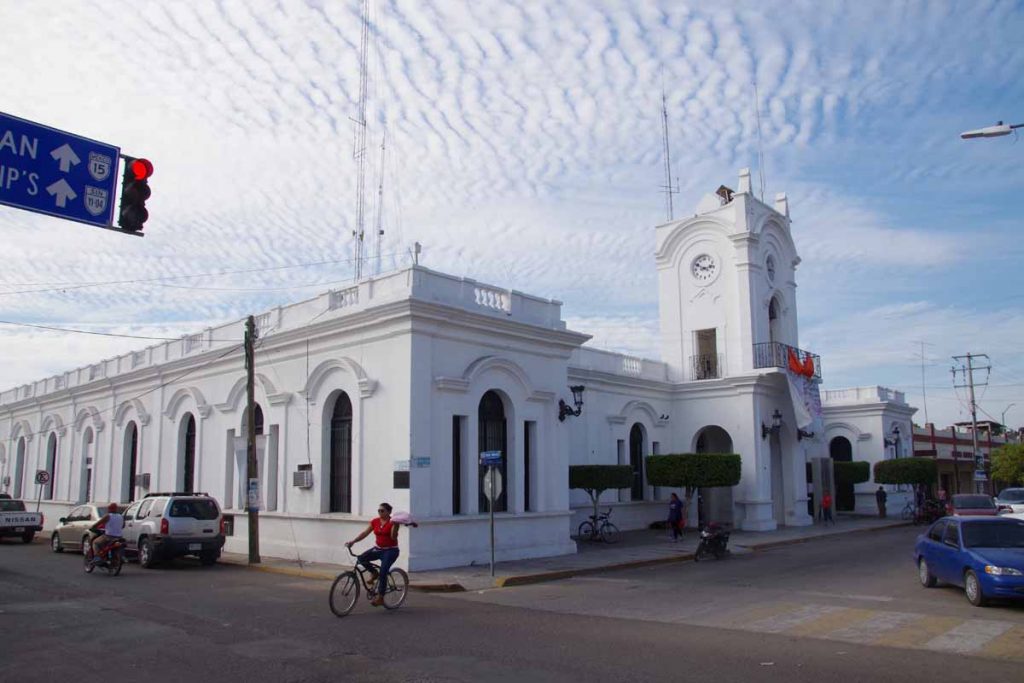 Look carefully and cyclist is holding up something with her left hand. 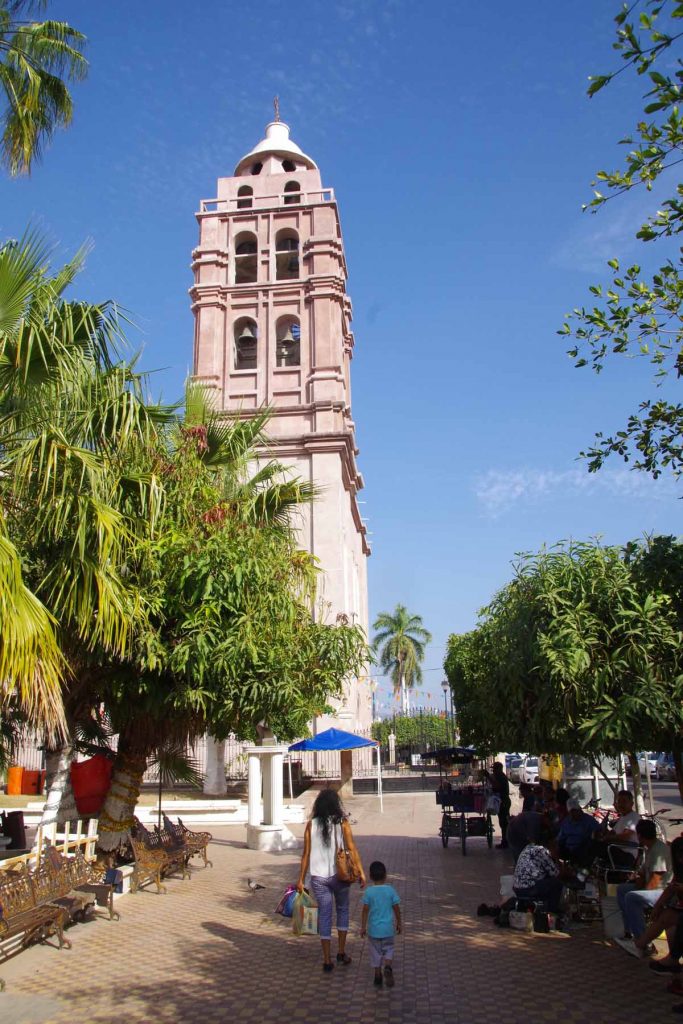 This gave me a chance to walk through town as well as get a bite to eat in restaurant. Overall a nice ride to start from Mazatlan.
Day Two
Nice easy ride for my second day. Got into town by noon which was before the worst heat. 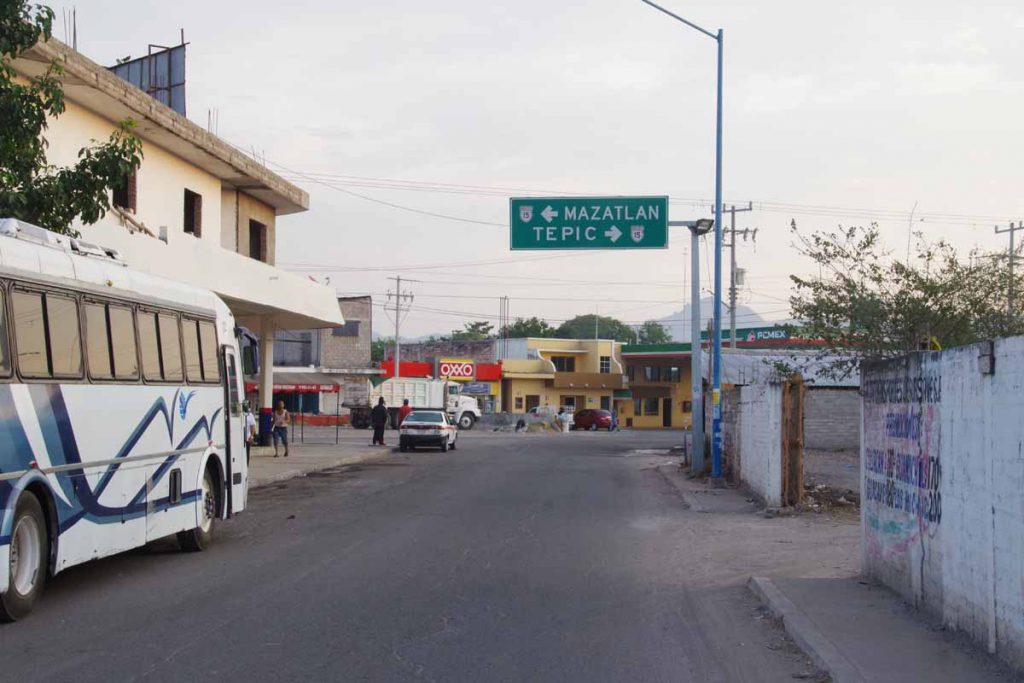 Work up my hotel hosts (think I was the only guest) and got on the road at sunrise. It was already 16C (61F) and forecast to be warmer than yesterday. However I had planned only 65km so would be able to get most riding done in cooler morning temperatures. 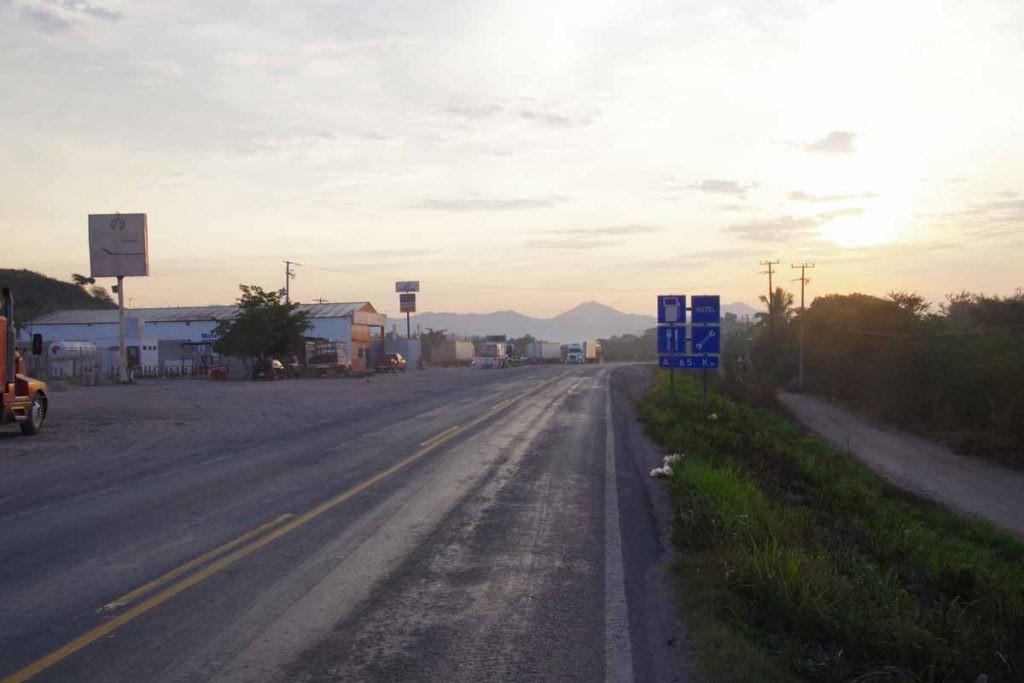 Once I got through town, I reached the main road at 7km. For the next 9km, both libre and cuota roads were together with four lanes and a good shoulder. Easy riding as there wasn’t much climbing today and winds were calm. Photo above was already saying next services in Acaponeta. 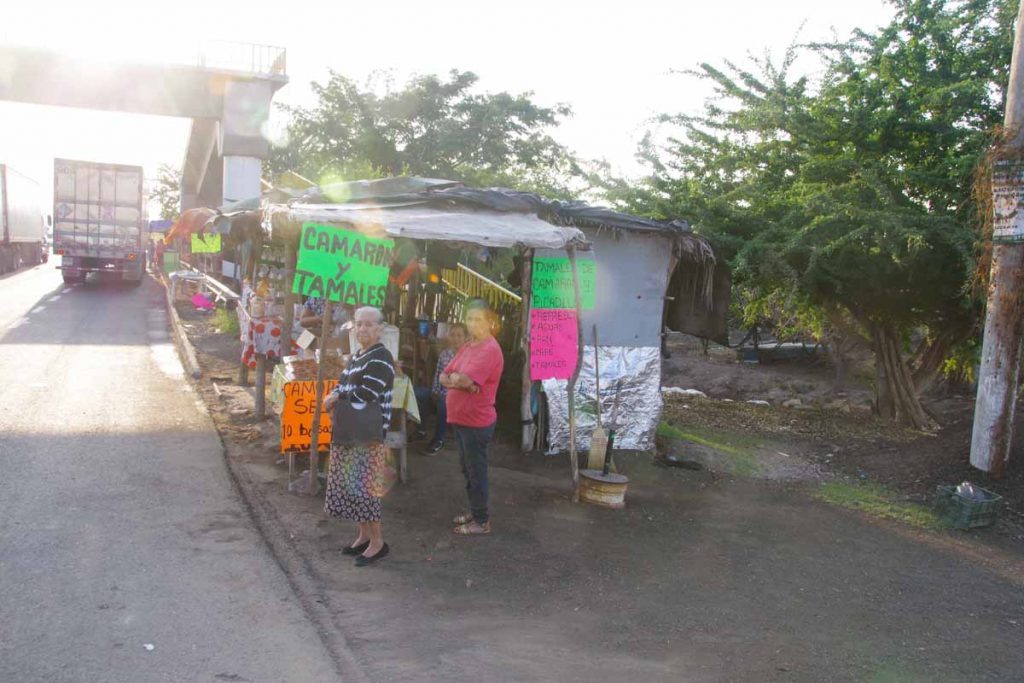 At 13km was a small village and many sellers of tamales and dried shrimp. Stopped for breakfast and I wasn’t the only one. 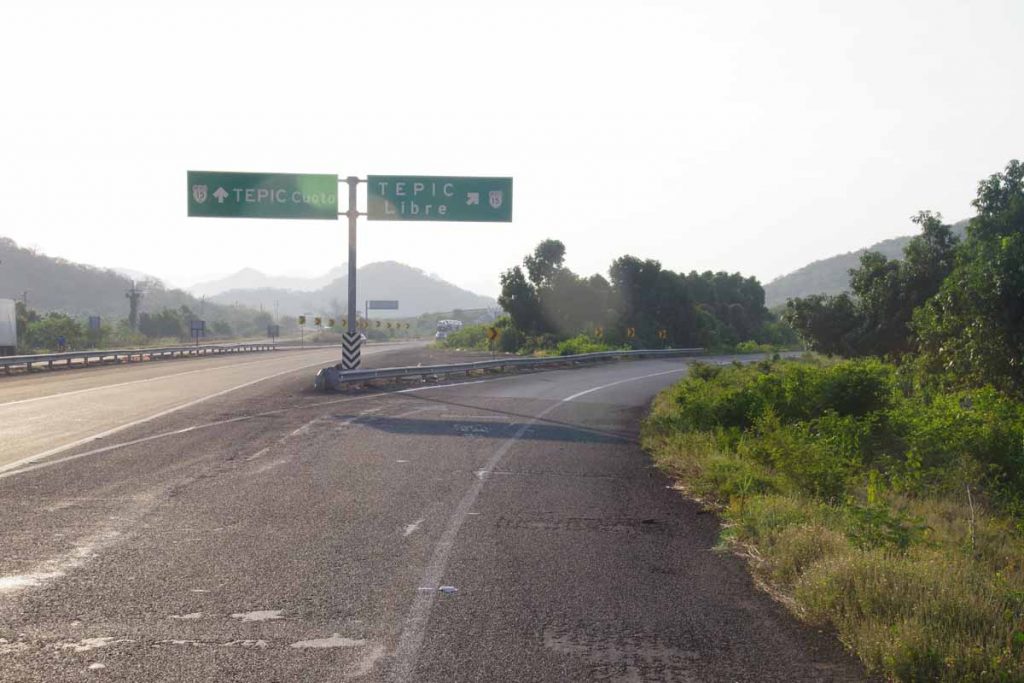 At 17km, the roads split and I took the libre since it was a more direct ride. While there weren’t shoulders on this road, traffic was mostly light until I got close to Acaponeta. 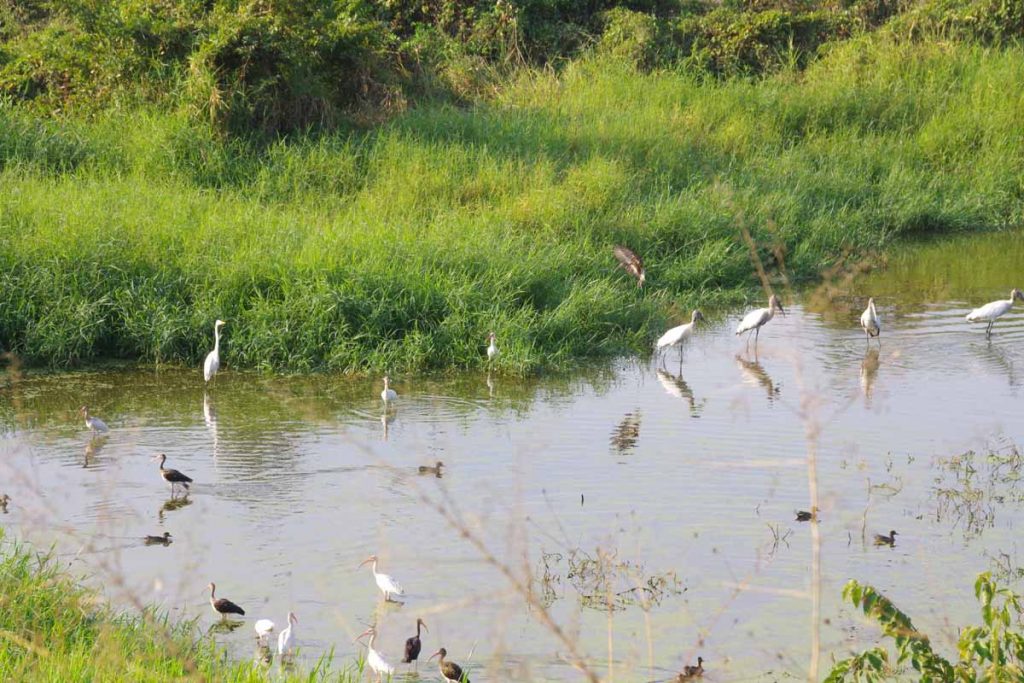 It was a pretty ride, with a variety of sights. Some marshy terrain with cranes. Other sections had orchards (not sure the trees). Also came past a large estuary. Overall still cool, flat and good riding. 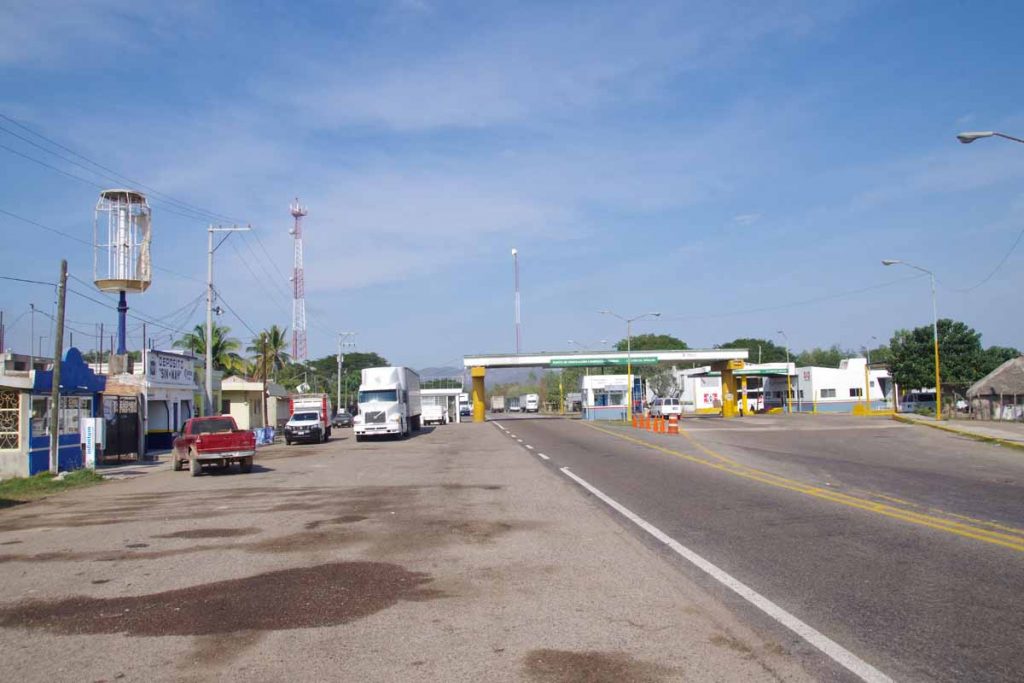 At 60km, I came through some controls, but nobody checking my direction. 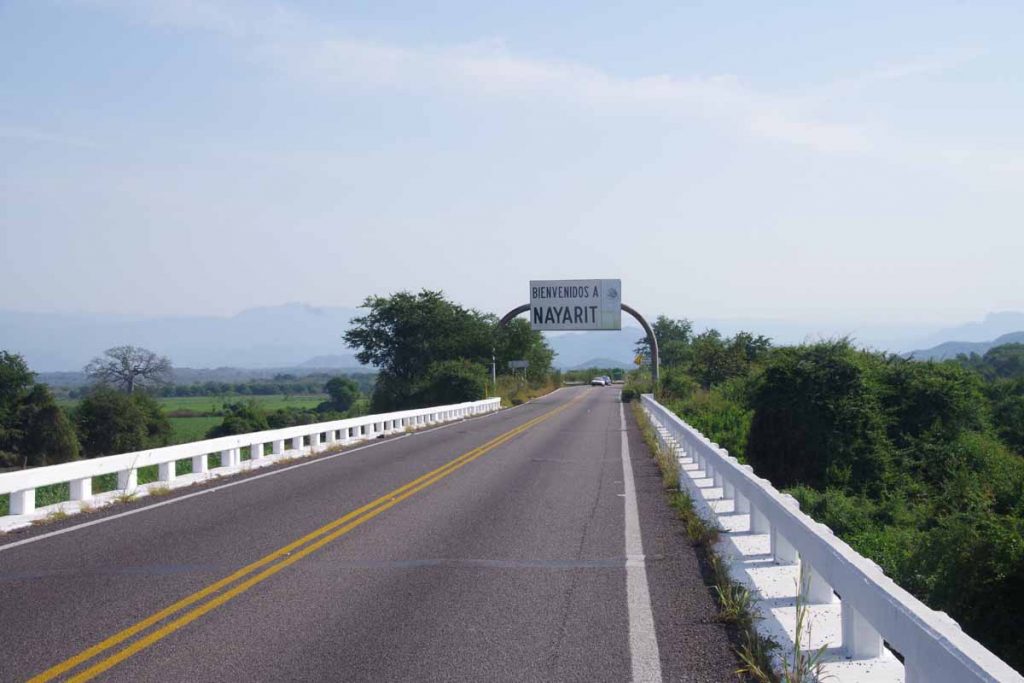 Shortly thereafter I crossed boundary into Narayit, my fourth Mexican state so far. Seemed like the vegetation encroached much closer on the road. There was moderate amount of traffic, so all felt a bit tighter.

However, not much later I was at turnoff to Acaponeta and cycled into town and found place to stay. Overall nice two days riding. Now an afternoon to look around town.