Made it to Guadalajara! Photo below with bike in front of the Guadalajara Cathedral downtown. 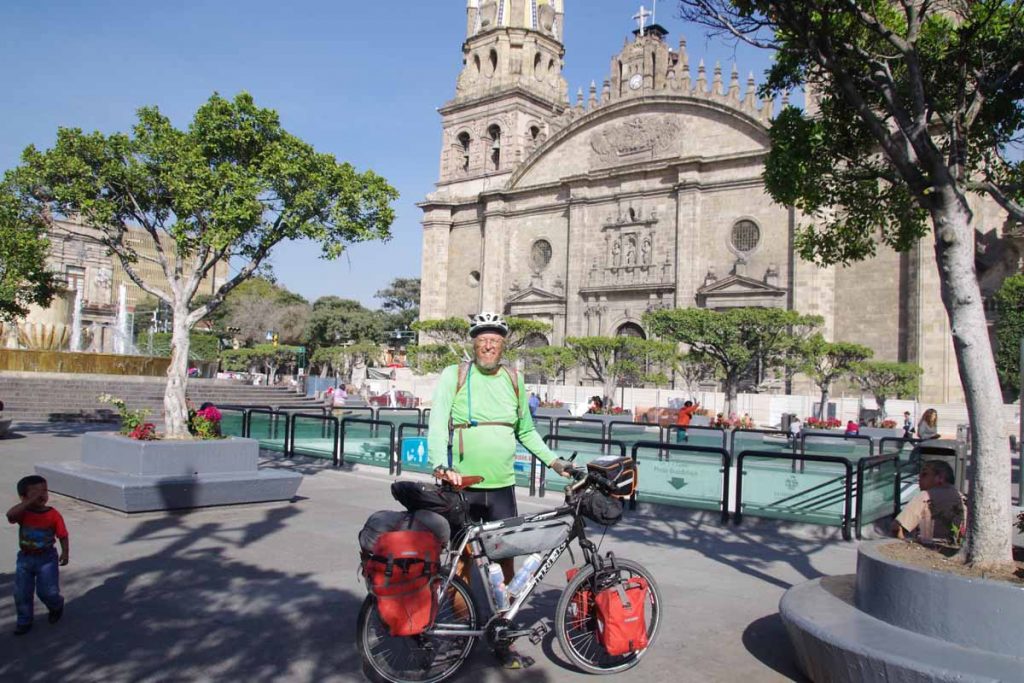 Two thoughts after cycling into middle of Mexico’s second largest city: (1) Mexican drivers are more patient and polite to touring cyclists than American or Canadian drivers and (2) despite that, I will be happy to bypass Mexico’s largest city (Mexico City) as it still takes a lot of concentration to carefully make your way into these big cities.

More details below, but to give an example of the politeness: today I recall several instances of drivers passing with thumbs up or asking the “where are you from” type questions when stopped at light and then being encouraging. As a different example, at one point the road ducked down into a tunnel (oops). While it was lit, my slow laden bicycle still felt out of place. As best I can tell, the car behind turned on emergency flashers and carefully followed to escort me until safely out of the tunnel. Thanks!

Now about those last two days from Ixtlan del Rio.
Day One to Magdalena
Up, down, up and across. That is the simplified description of the first day. Lots of climbing and descent in the first 40km and then flat going into Magdalena. Not a long ride, but still more than 900m of climbing. 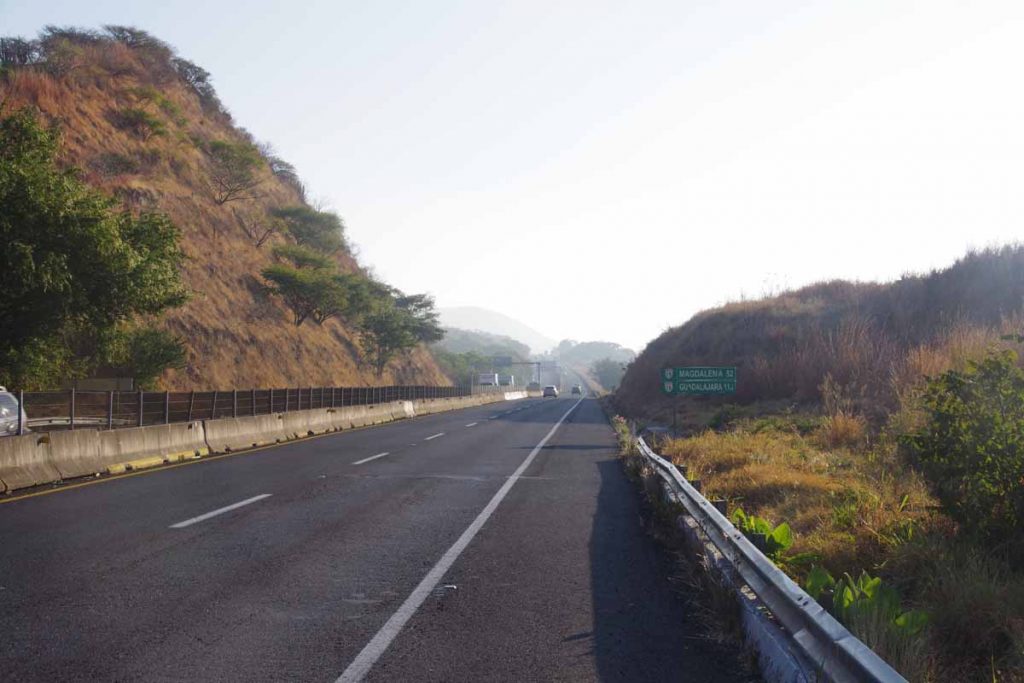 Ixtlan del Rio came alive more after the sun went down. Overall it was cooler here, 12C overnight (53F) and even saw locals wearing light coats. In the morning, I walked over the nearby OXXO for a yogurt and then set out on the road. Within 2km, I was back on the cuota again. This road has kept getting busier so after Guadalajara will likely try some more local roads again. 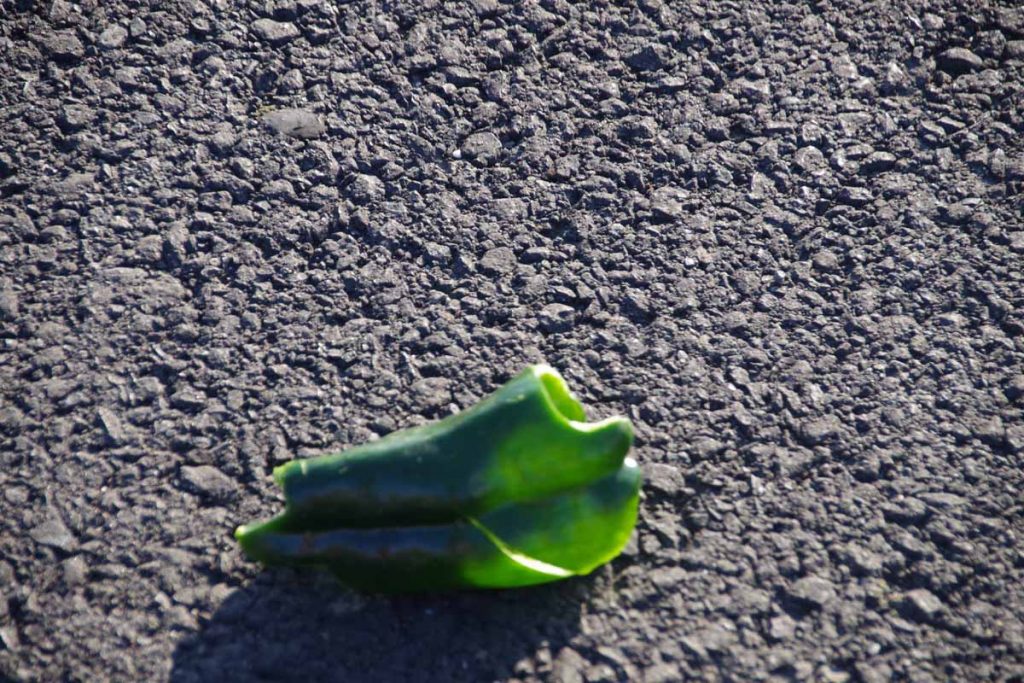 I saw a few more of these smushed peppers today. Somewhere behind me are the fields they load trucks up with peppers and somewhere ahead is where they get sold, but in between a few fall off the trucks and end up on the highway shoulder. 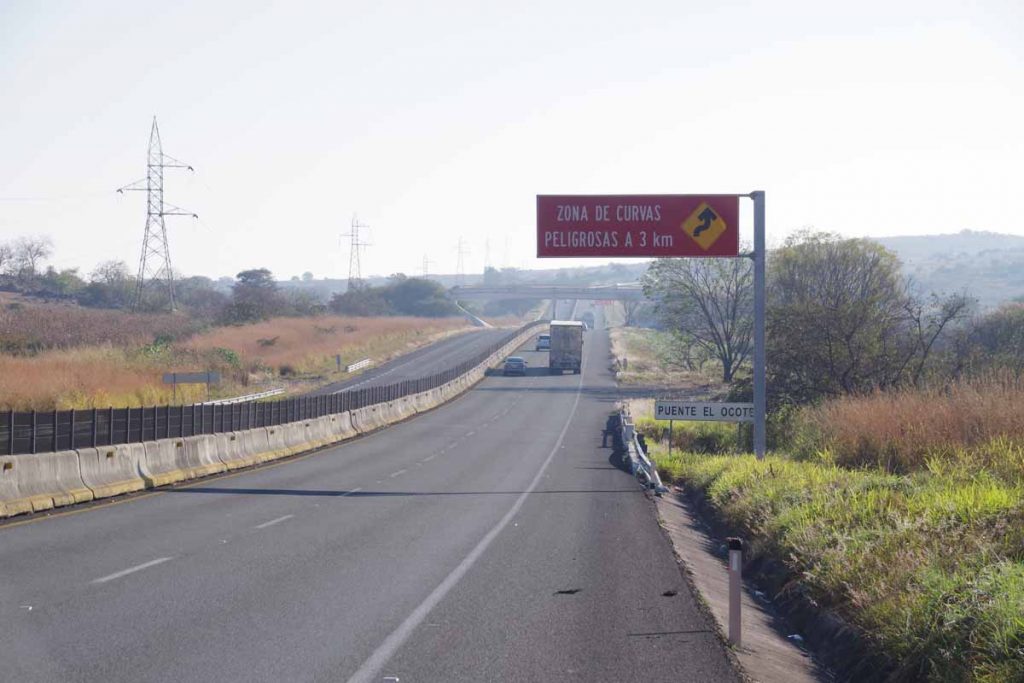 There was a steady climb coming up to 14km where elevation was briefly 4400ft. After this the zone with large curves had the highway slowly wind itself downhill to around 3300ft. It was a pretty descent into a valley. Just a little past the bottom was a toll booth at 30km. You can also see some of the shredded tire debris found on the shoulder. 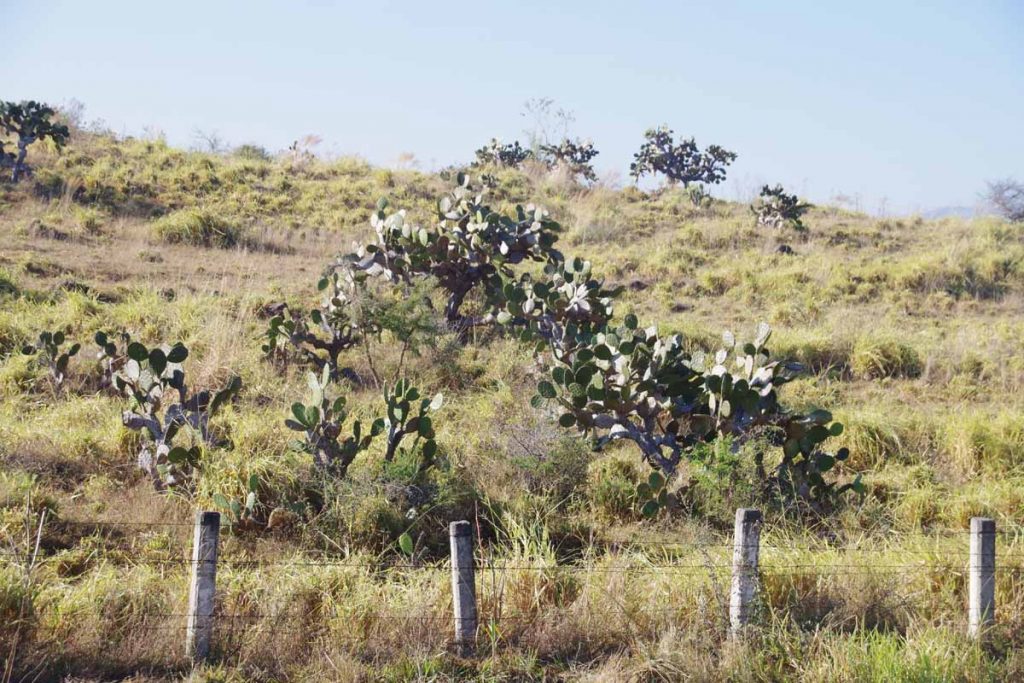 I started seeing a few cactus again, so definitely getting into drier regions than Mazatlan. 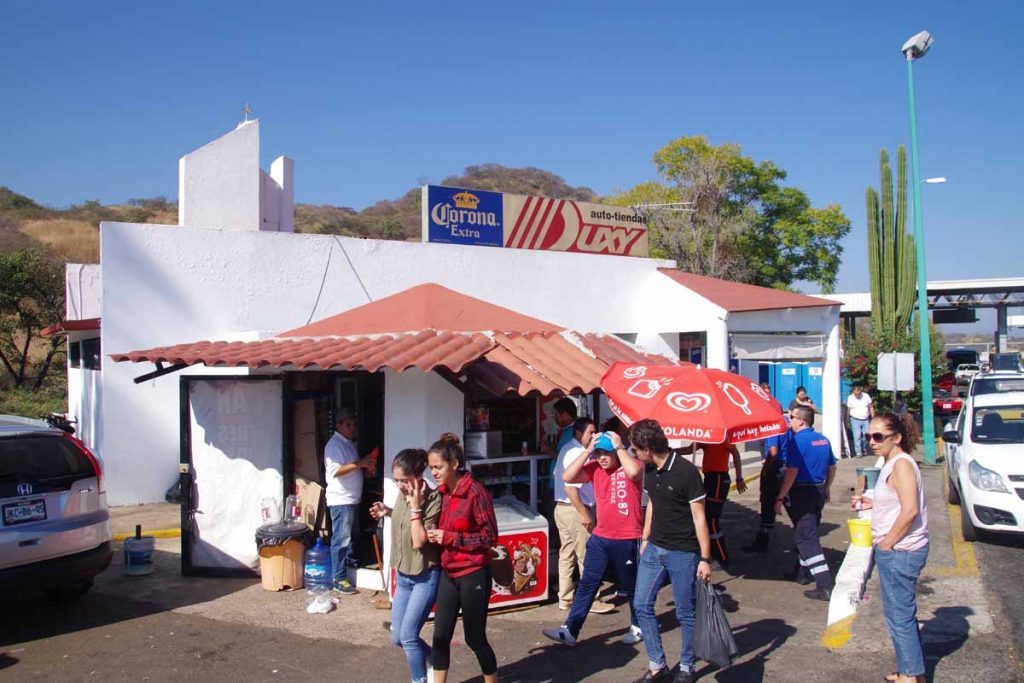 Here was little shop at the toll booth. Definitely busy this morning. In addition to the local booth, some local vendors had also set up sales of gorditas and other foods. I rested here for a while.

After this, the next 10km steadily climbed until 4700ft of elevation. Grade never got much over 5-6% but it was a slow steady climb. At the top, suddenly the next valley opened up with wide views and much flatter terrain. 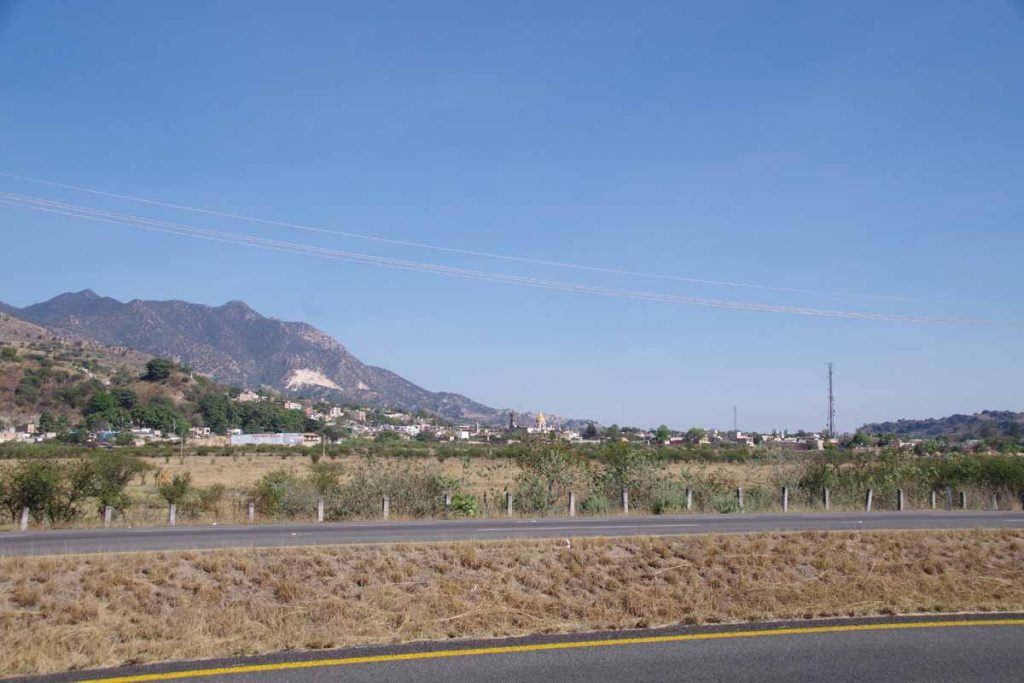 As I came past Magdalena on the left, decided to stop here for today. I had changed to Central Time Zone when I crossed into Jalisco (my 5th Mexican state), but still somewhat early. In any case, I pay at least as much attention to sun and likely sunrise/sunset as specific times. Not far from toll road exit was small hotel as well as restaurant. Seemed like nice place to stop.
Day One to Guadalajara
7C (55F) overnight yeah). Day two started with more smushed pepper and riding the cuota but ended differently entering the big city. 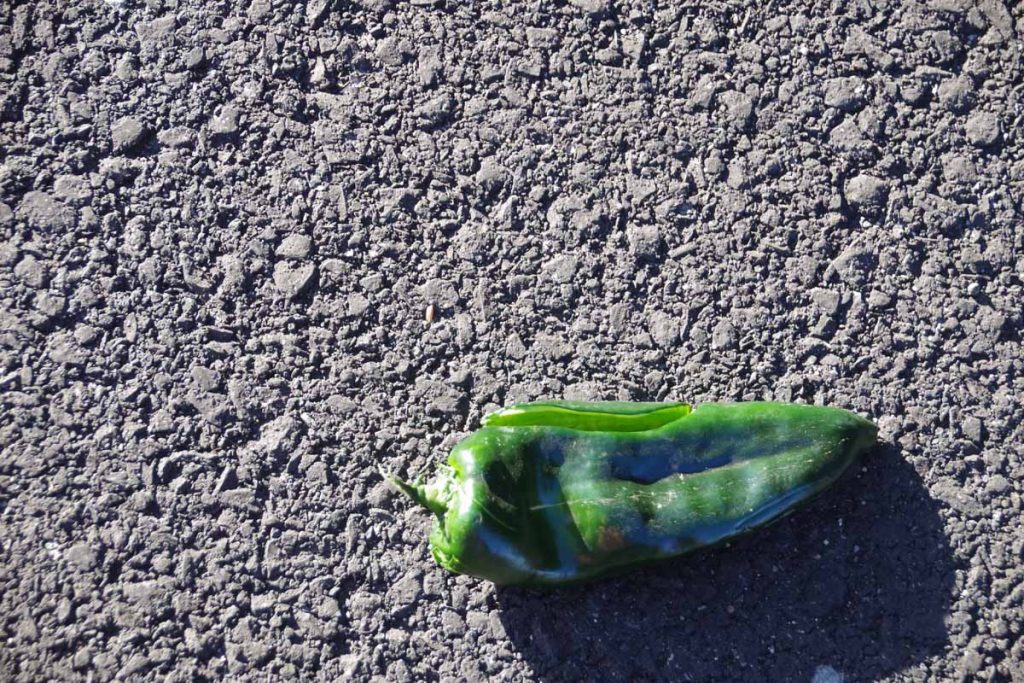 Several climbs today, though overall 800m of climbing was less than the last two days. After 25km the road turned to a concrete highway. It wasn’t marked at first. 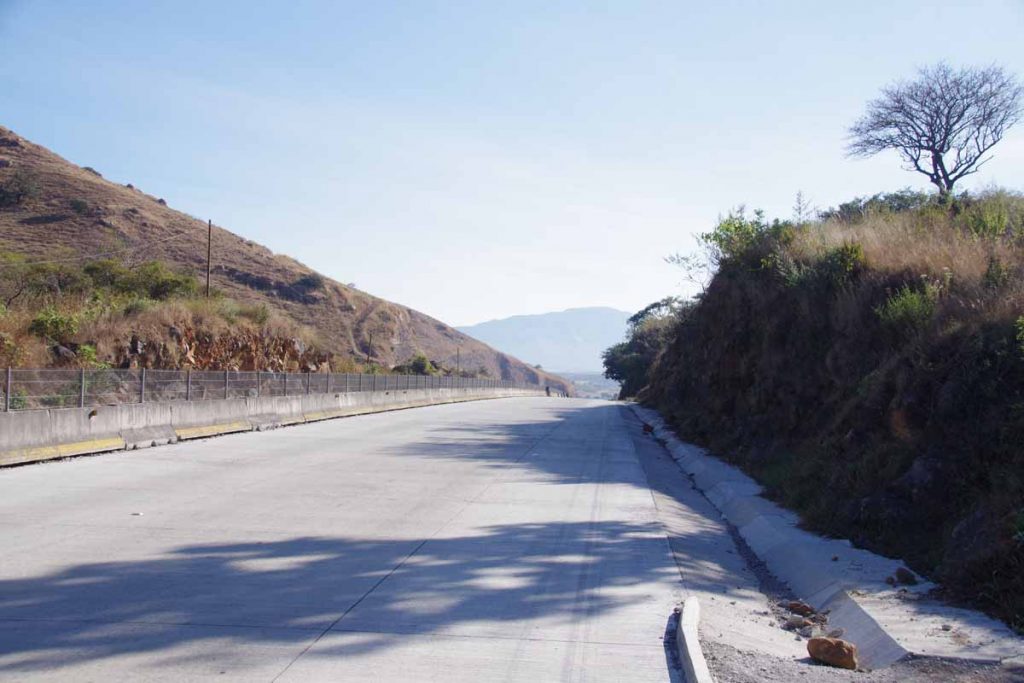 These folks below were shredding some of the corn stalks and putting them in bags. 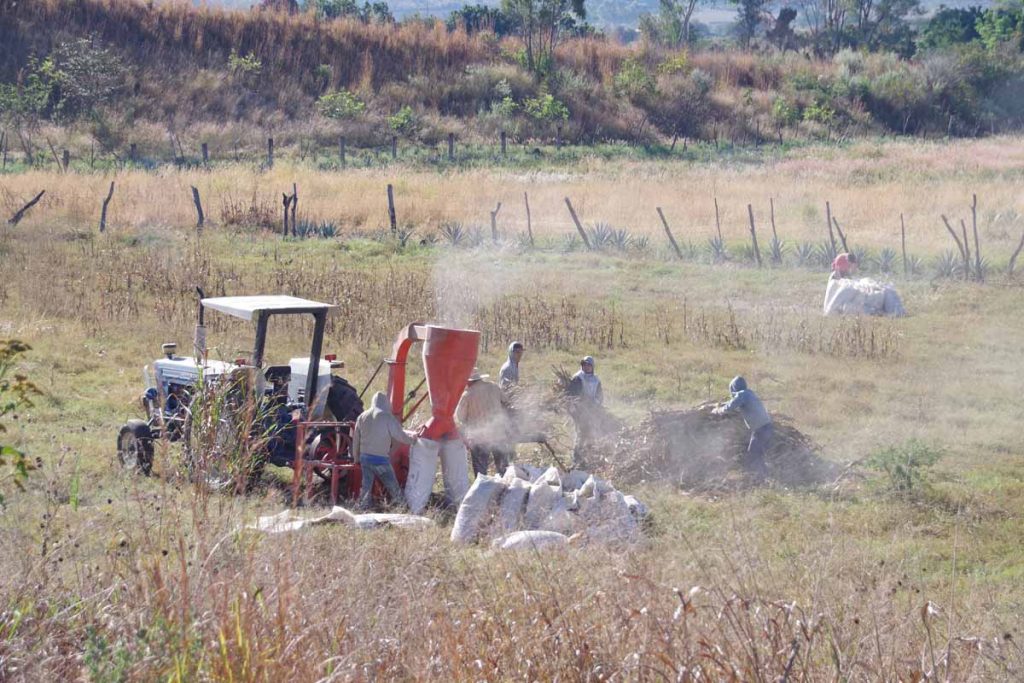 At 37km, I came to a toll plaza and following this was an OXXO. 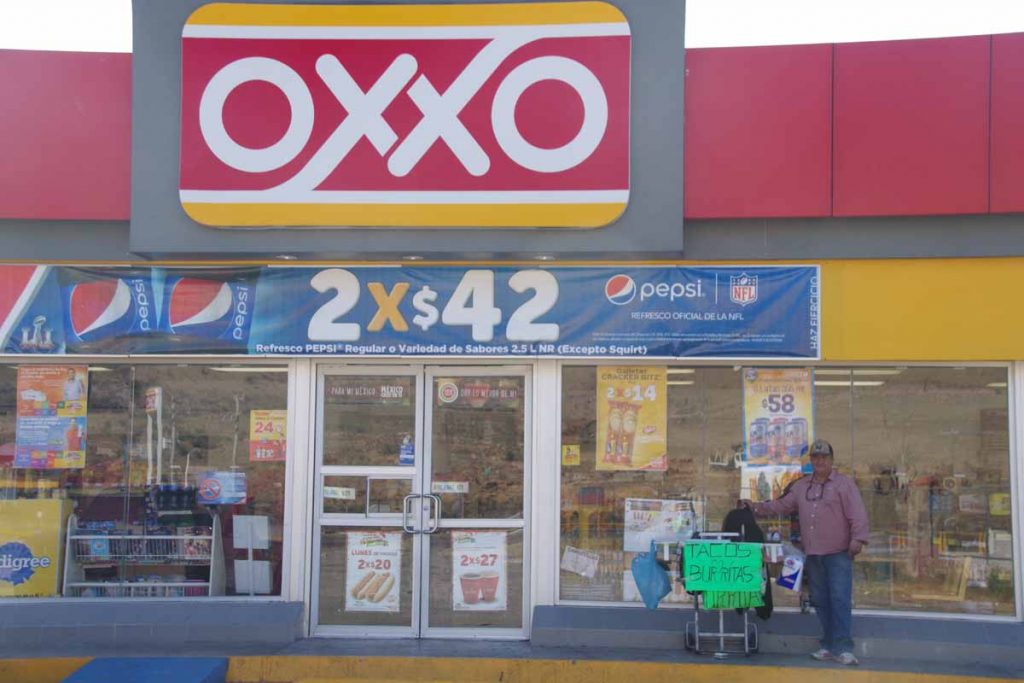 What I thought was fun was this guy selling tacos and burritos in front of the OXXO. I had an early lunch here including some of his burritos. 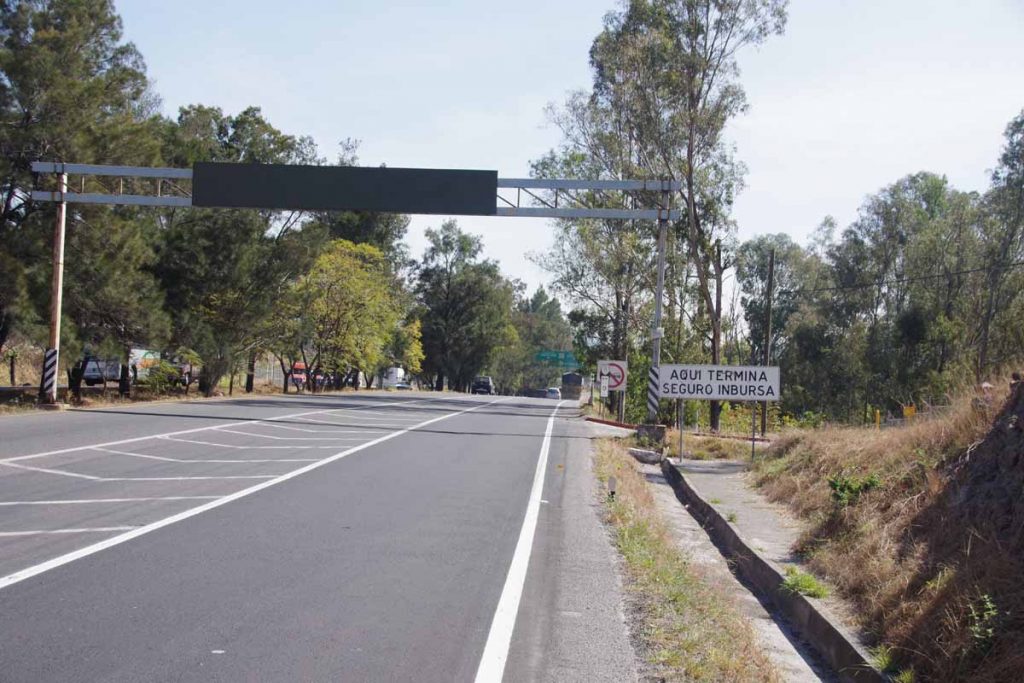 It was another 11km before the cuota ended and merged with the libre. I was anticipating a difficult ride the next 10km since several cycling journals had complained about lack of shoulders combined with heavy traffic. Perhaps my expectations were set low, but it was easier than I expected. At times the shoulders did go away and in one construction zone of 2km, there pretty much was no shoulder. However, as much as possible, traffic gave me room. I had my mirror and concentrated on carefully riding the white line (sometimes to the right there was drop off into a ditch) and all went well. 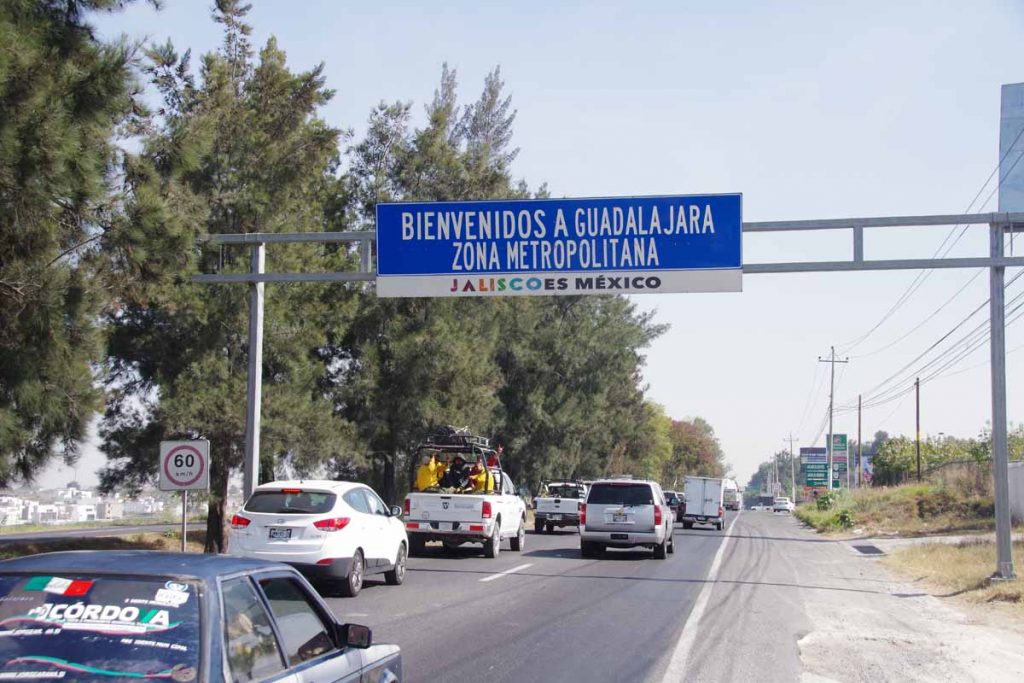 Here was entrance sign welcoming to Guadalajara metro area though I still had more than 15km to go. This spot had a shoulder but areas without were just like this except for the shoulder. Traffic also wasn’t driving real fast. 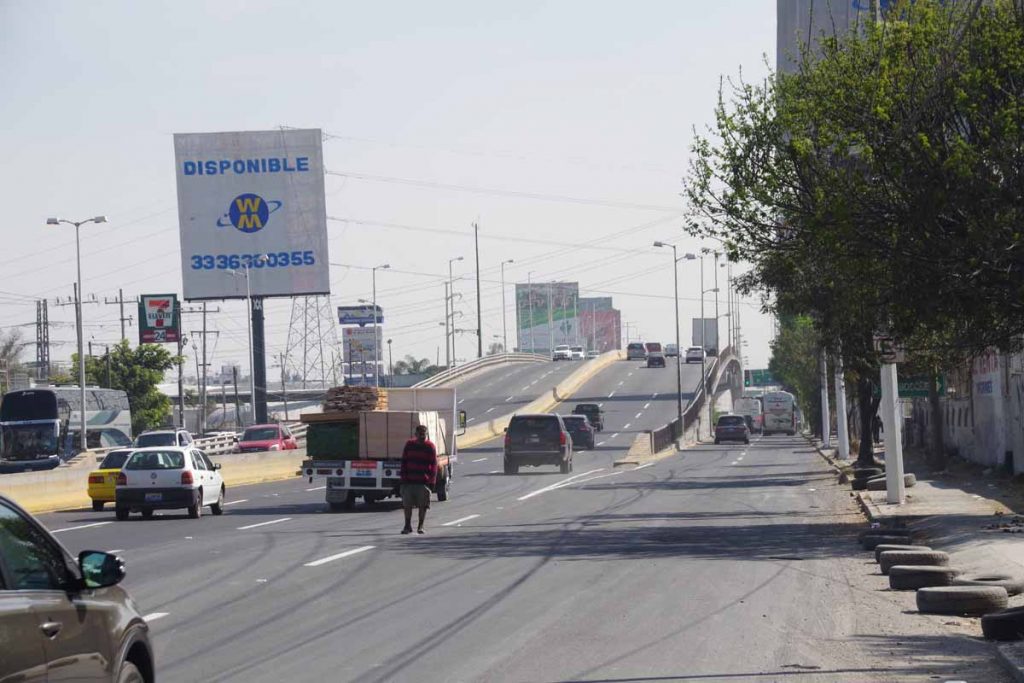 At 61km I crossed the ring road and it took some more care. There often was the main road in middle that merged with frontage roads on both sides. The trick was that you weren’t always sure if frontage roads would continue. So I’d pull over, stop and get out Google Maps on cell phone and figure out best I could – since it wouldn’t make sense to get onto that middle section unnecessarily. 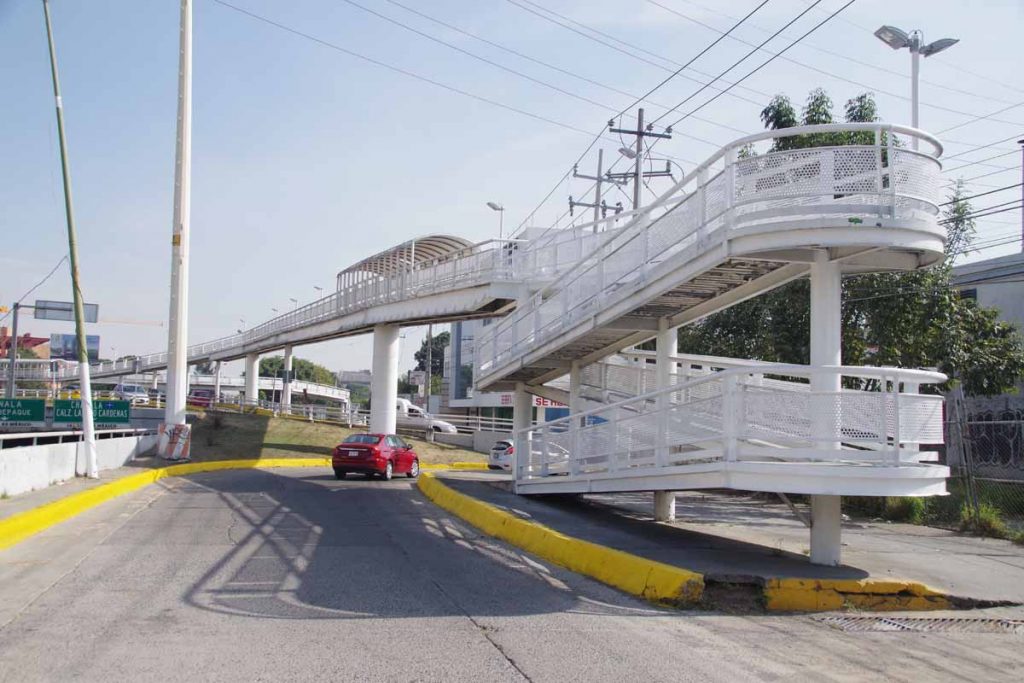 At this point the frontage road did run out. However, I walked my bicycle over this pedestrian overpass crossing several large highways. It was slow but without too much trouble, I found my way into middle of Guadalajara and to a hotel I had reserved online for two nights.

Hooray, nice to get here!

I’ve only done a short walk around, but few things I see so far in my touristy location: 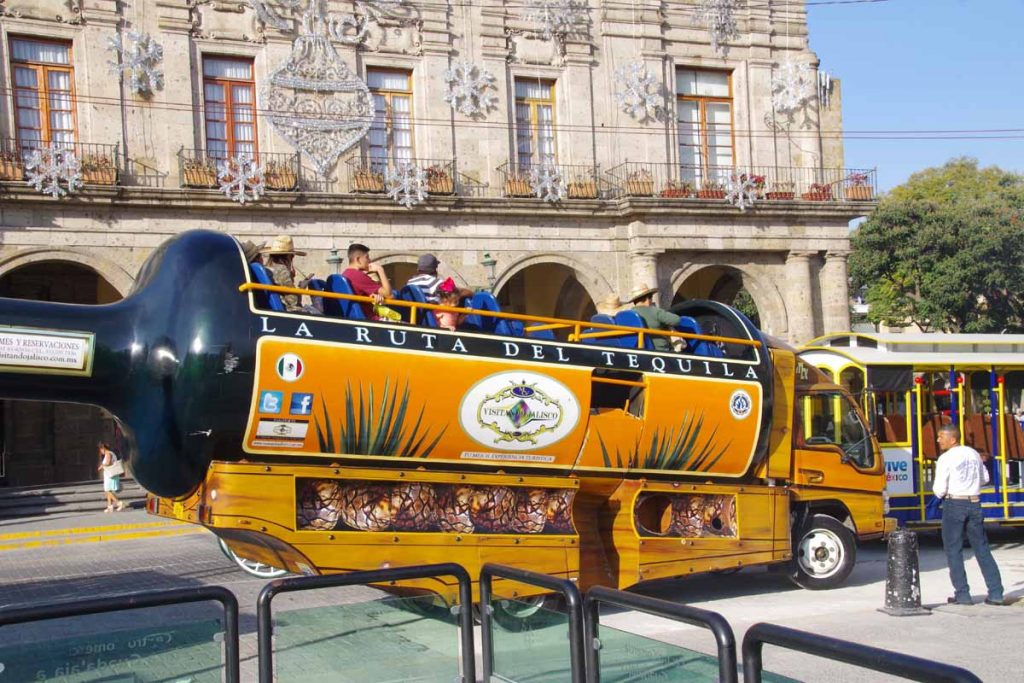 Lots of tourists, these ones riding in a tequila bottle shaped vehicle. 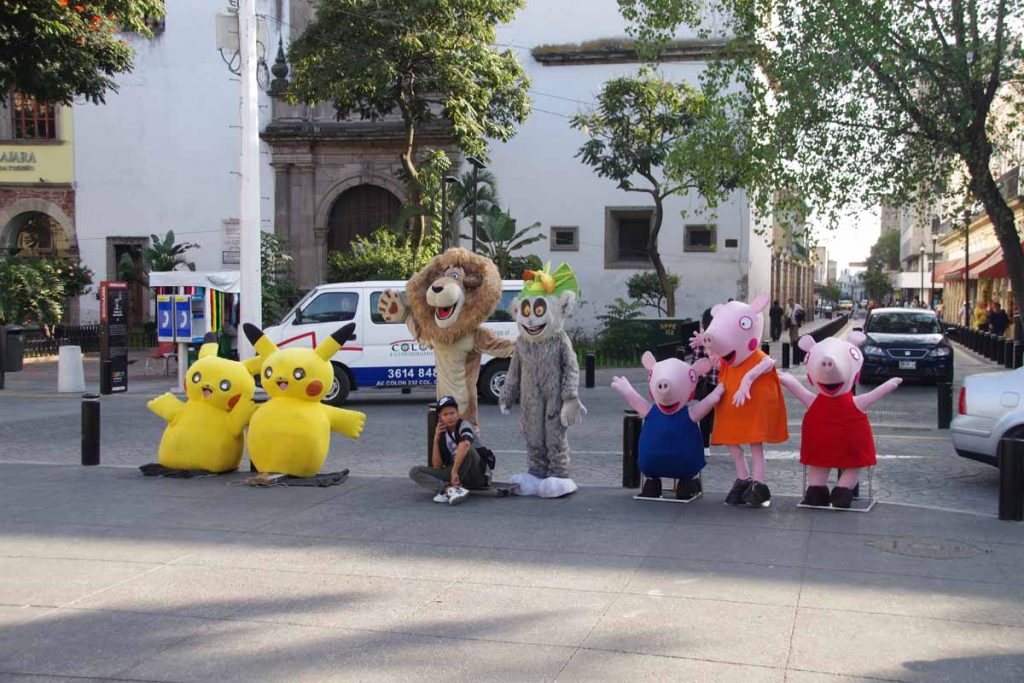 For a fee, you can get your photo taken with these characters. I think the bored looking guy is there to hustle the business. 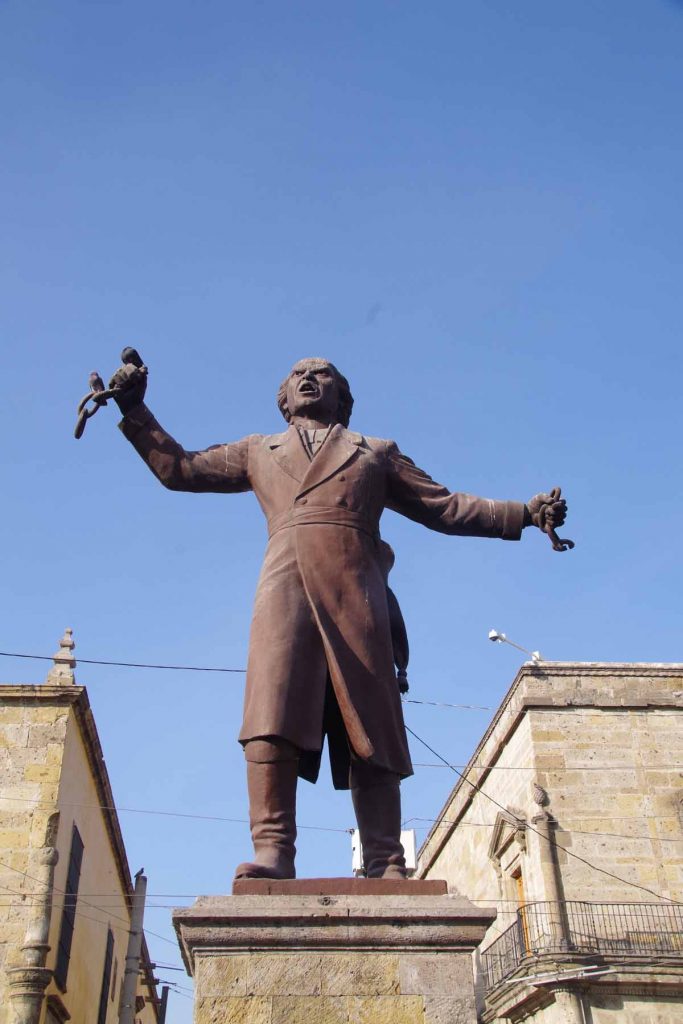 Statues of revolutionary patriots, though perhaps not quite as fierce looking when they wield pigeons in their hands. 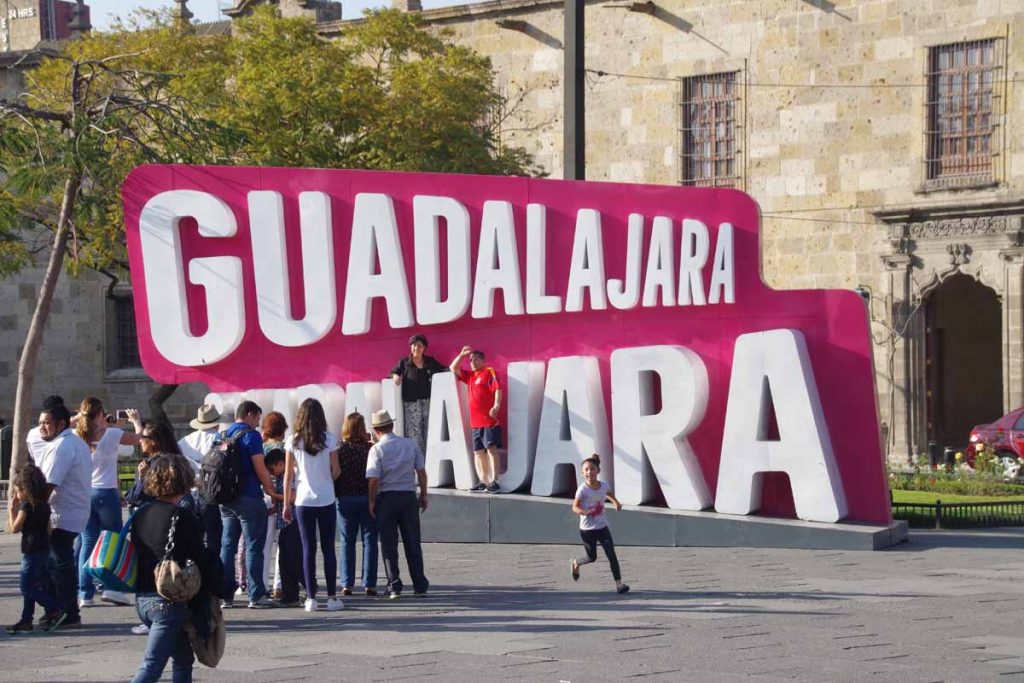 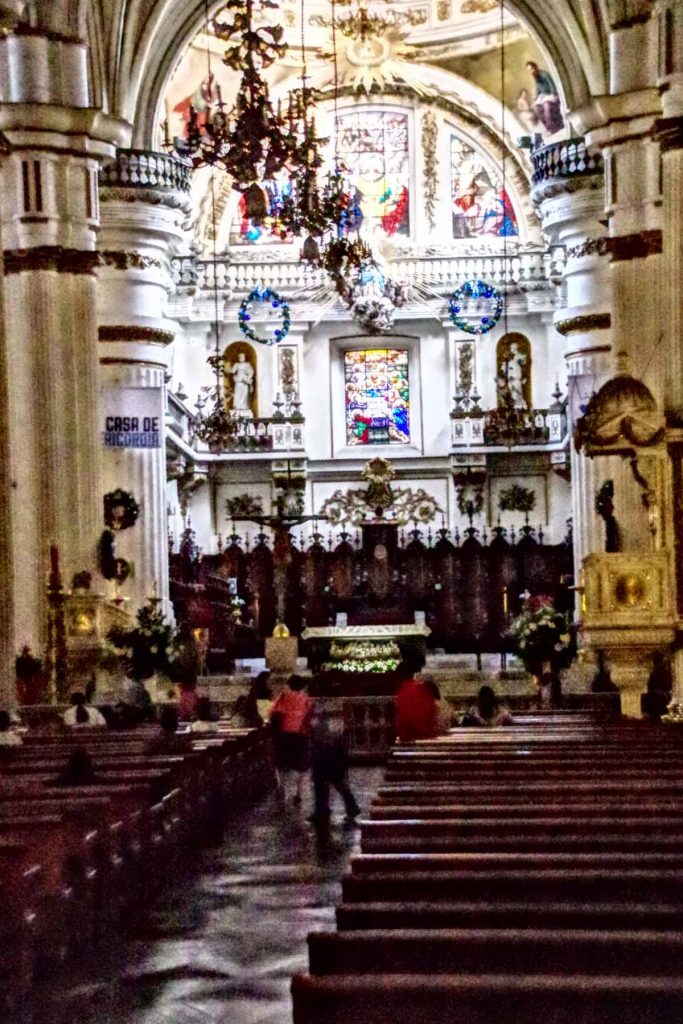 Church itself is large, elaborate and beautiful.

I’ve also noticed in my short time that Guadalajara seems to be a bit bike friendly. I’ve seen bike lanes (though not on roads I picked) and cops on bicycles. 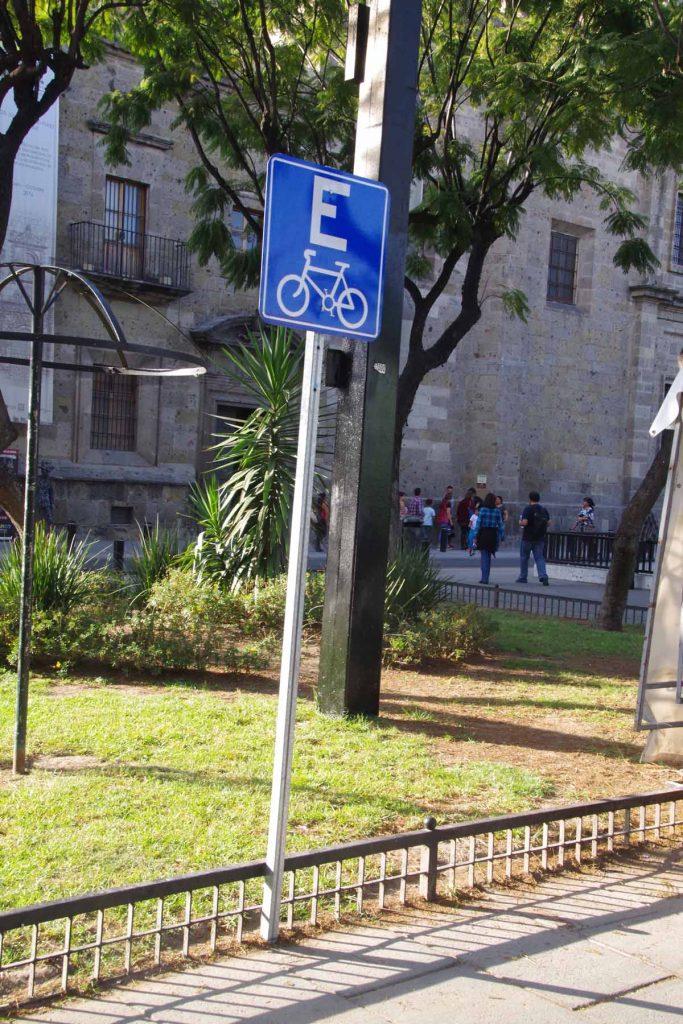 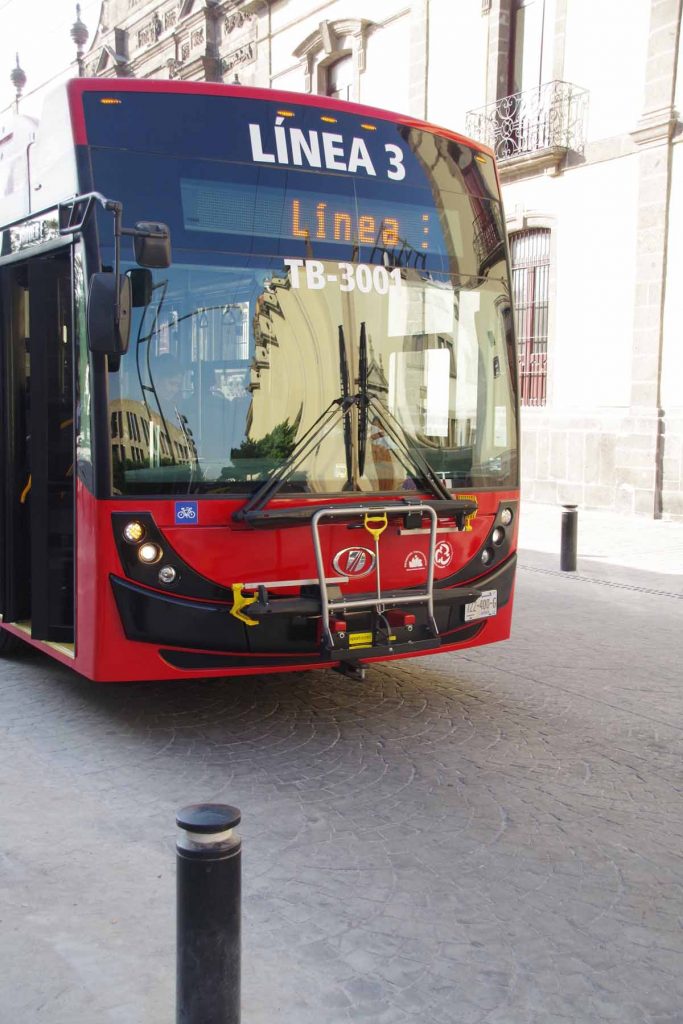 Buses with bike racks on front. 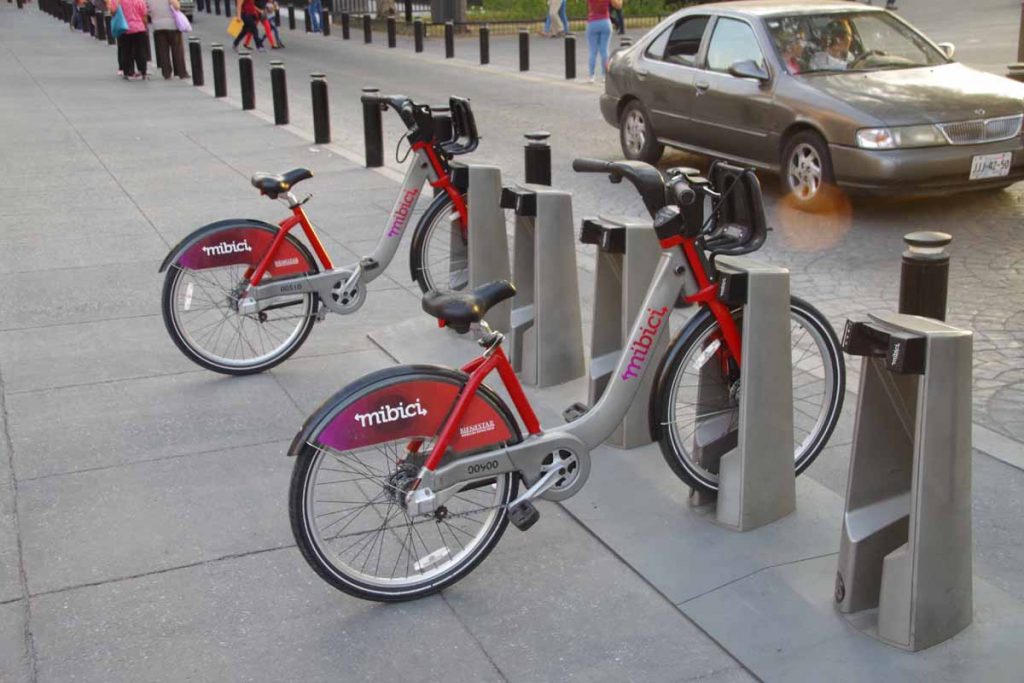 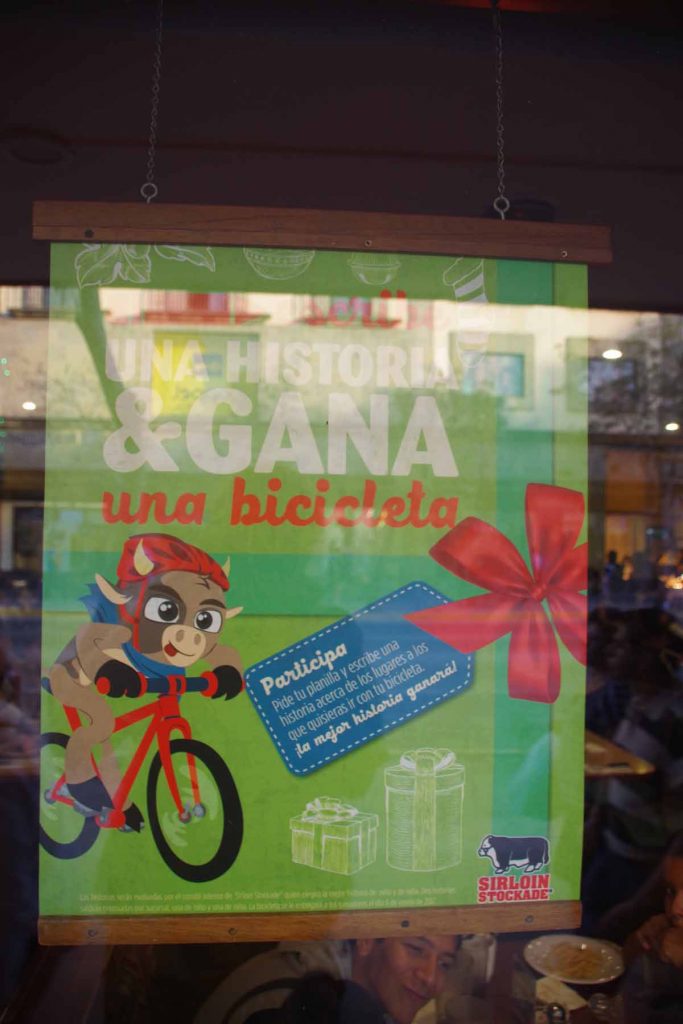 Sirloin Stockade restaurant had a “tell us your bike story” contest going on. Also a good buffet.

While bike is riding well, tomorrow might see if I can find a shop for quick check/service on brake pads and chain. I’m guessing I’ve gone ~1/3 of distance from San Diego to Panama City and this will be one of the better opportunities to have everything checked. Also a good chance to review maps and journals to figure out best routes. Thinking of Toluca, Oaxaca, Tapachula to finish Mexico, but want to see what other bike tourists have done. For now, nice to find myself here in Guadalajara.