A hilly capital city for a hilly country. Other than the hills, entry into this metropolis of one million people was easier than expected. We took two days to ride from Siguatepeque to Tegucigalpa. First day was longer with an 800m climb and second day was easier.
Day One
Full day cycling today mostly on a good four lane highway. Still a lot of climb and descent, on a busier road.

Our hotel room came with breakfast included, so nice to get some pancakes before starting. 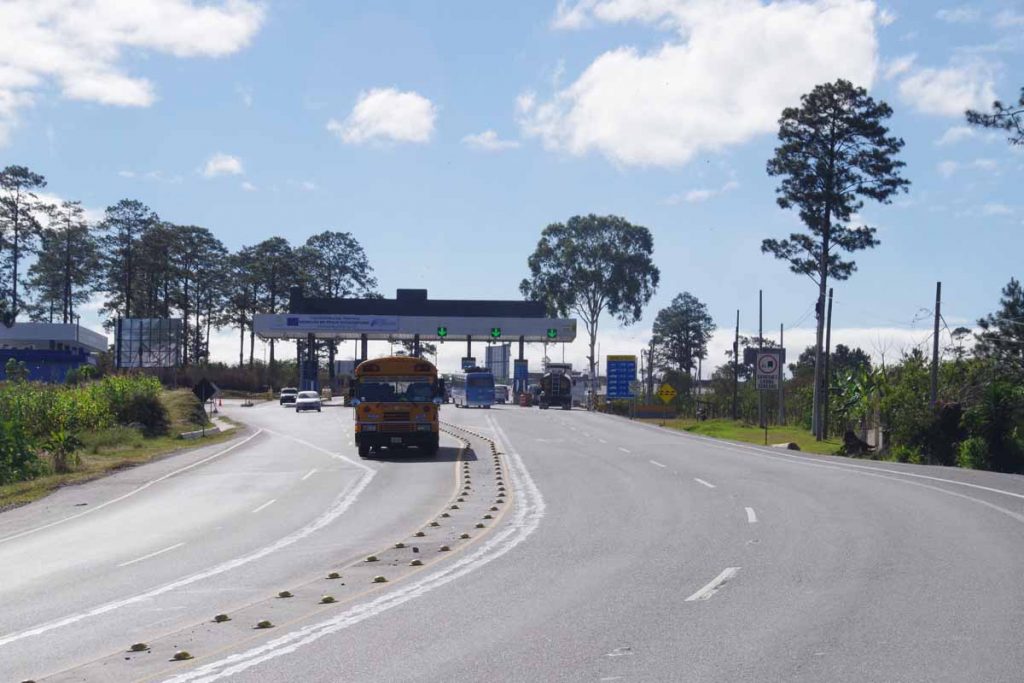 We started on busy highway along town. After few kilometers we passed through a toll booth. As in Mexico, the attendants waved us through past the tolls. Car fare was L 19 or slightly less than a dollar.

After this short hill, we had mostly descent. 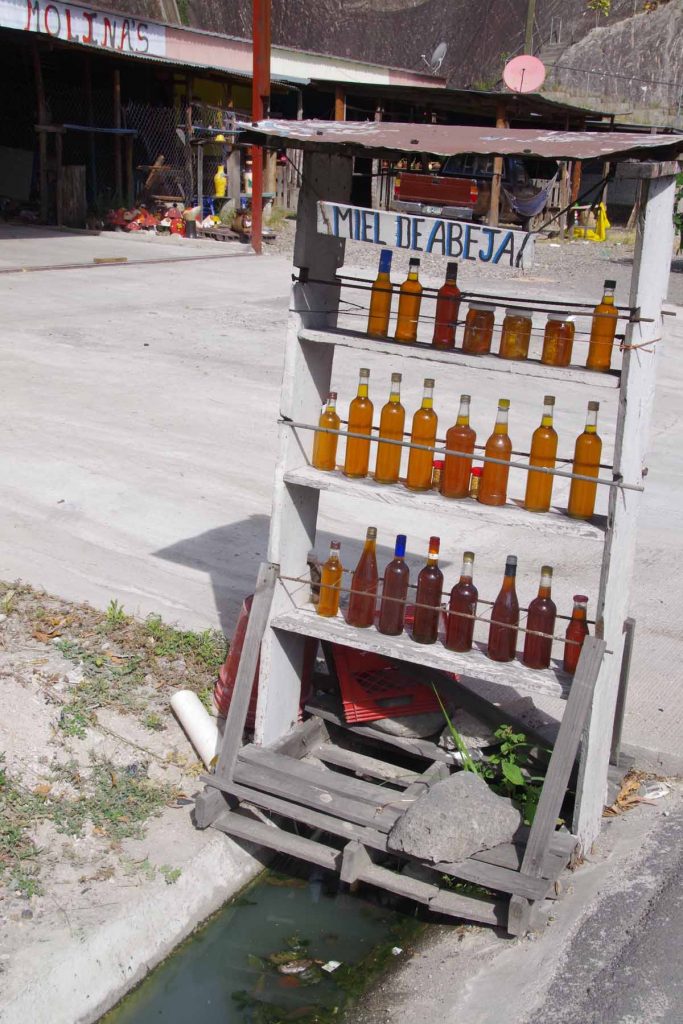 Places along the way were selling honey. Also places selling painted handicrafts. Our road descended and followed a river before climbing to local maximum. 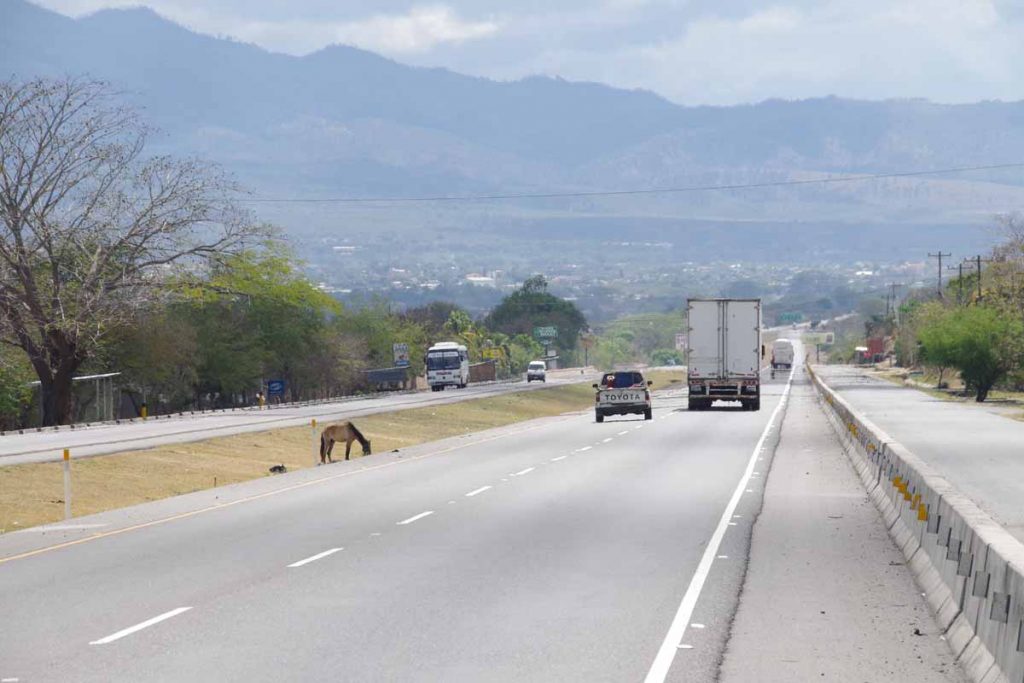 Our road came into broad valley with larger town of Comayagua. Photo above shows major highway as well as a horse tethered to graze in the median. 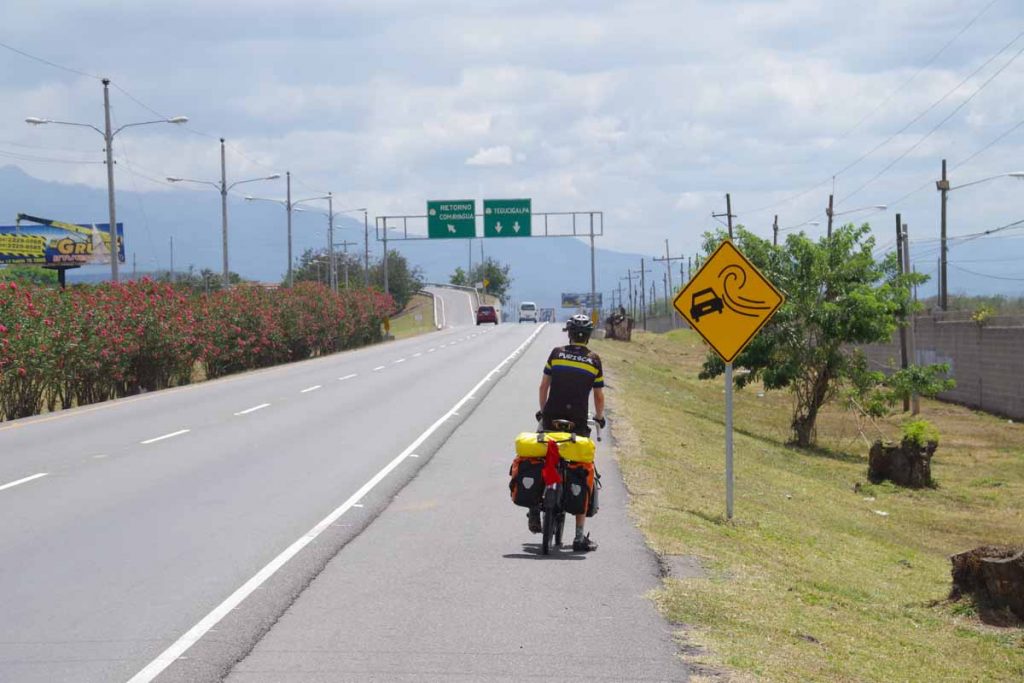 We did get some cross winds, though not as strong as suggested by this sign. Not much past this, a truck passed as we were cycling along. Heard a loud bang, followed by shards of tire falling onto the highway. I’ve seen these tire remnants on the highways, but this is first time I actually witnessed a tire blowing up. 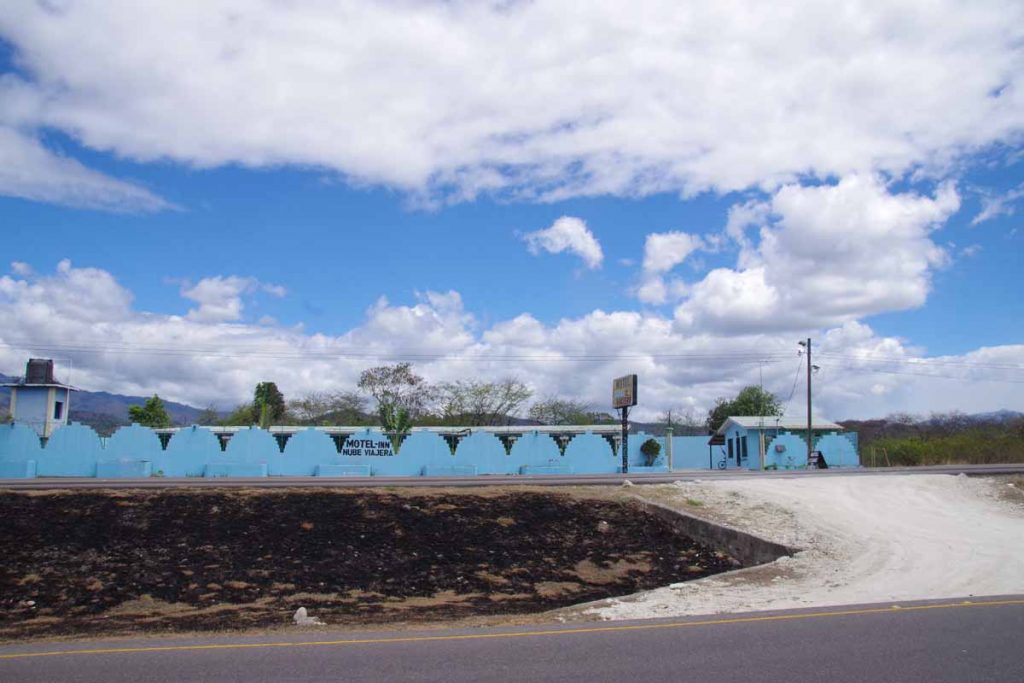 This motel was our “backup option” if we needed a shorter day. It didn’t have much around it though. A few kilometers later we had a nice restaurant that served food buffet style. You would pick out things you wanted and then later learn their cost.

The road narrowed to a single lane shortly thereafter. The shoulder was poor and a lot of truck traffic, so kept having to ride a short bit on shoulder, short bit in road and otherwise dodge the worst bits. 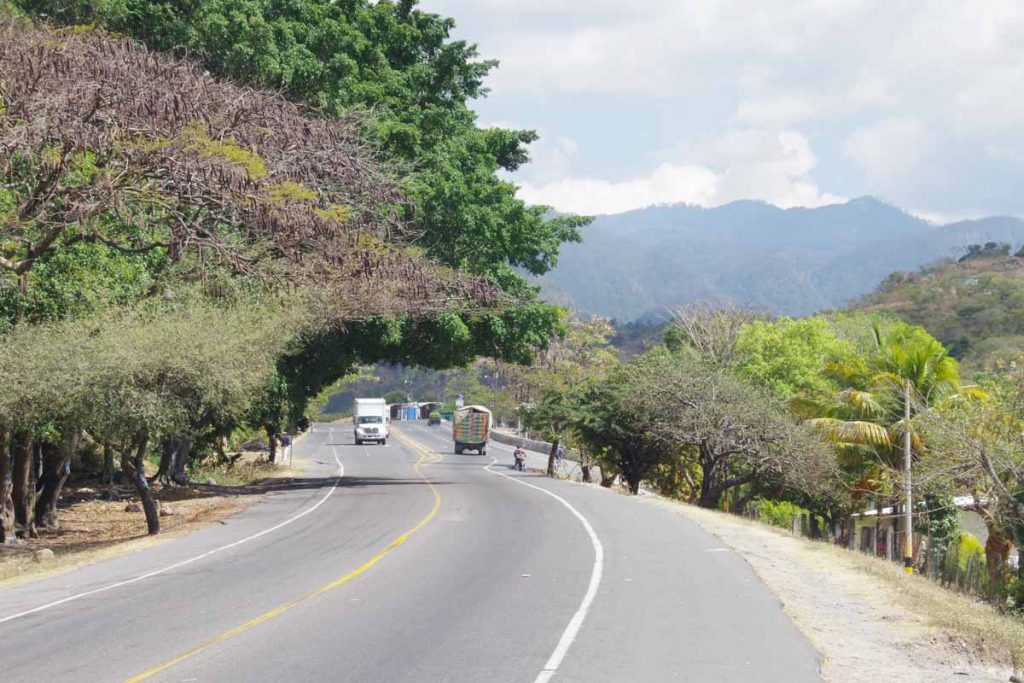 Fortunately a short bit later the road widened to four lanes with a good shoulder. This was also start of our 800m climb. That took us a few hours. 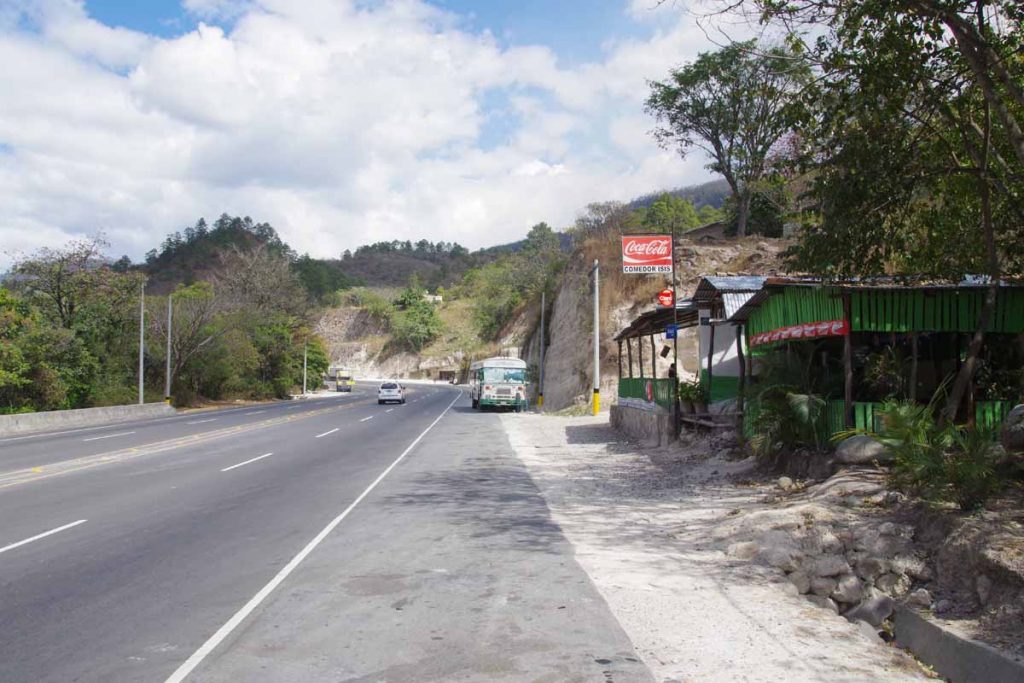 Comedor ISIS was along the way. We didn’t stop here, but did stop at other places to get a drink and recharge up the hill. 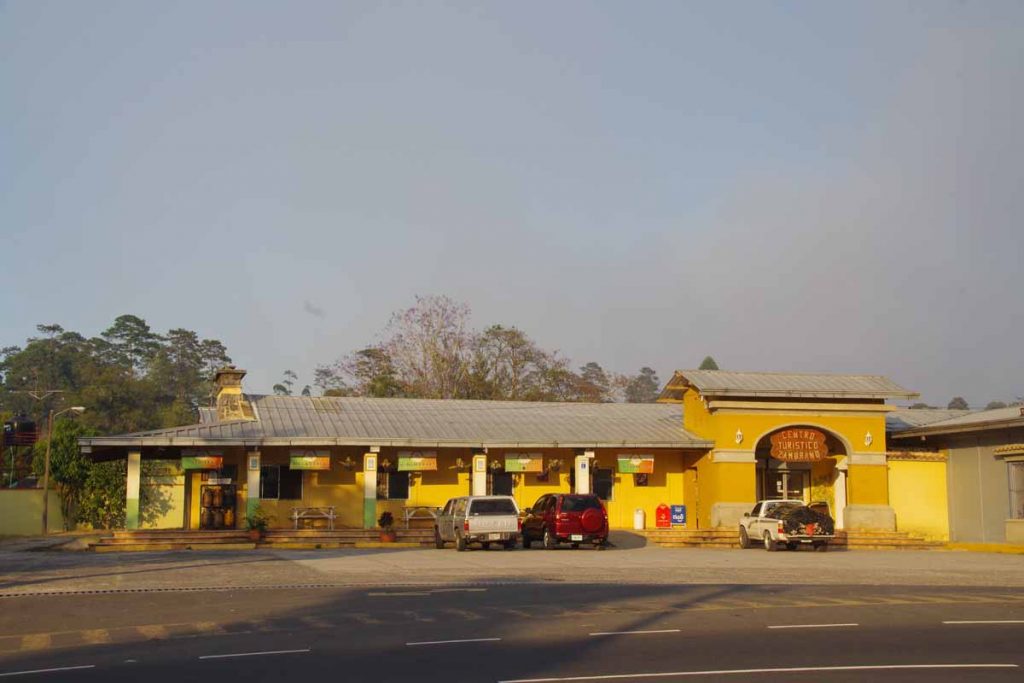 At least crested the top, went past another toll booth and then more descent down. Zambrano even had a tourist office. They told us of the hotel a kilometer further. No wifi there, but otherwise reasonable hotel.
Day Two
Down, up, down – was the overall summary for the day. However, once we got into the city, we also found a lot of short sharp hills. I took off a little early today since the day started with a downhill. 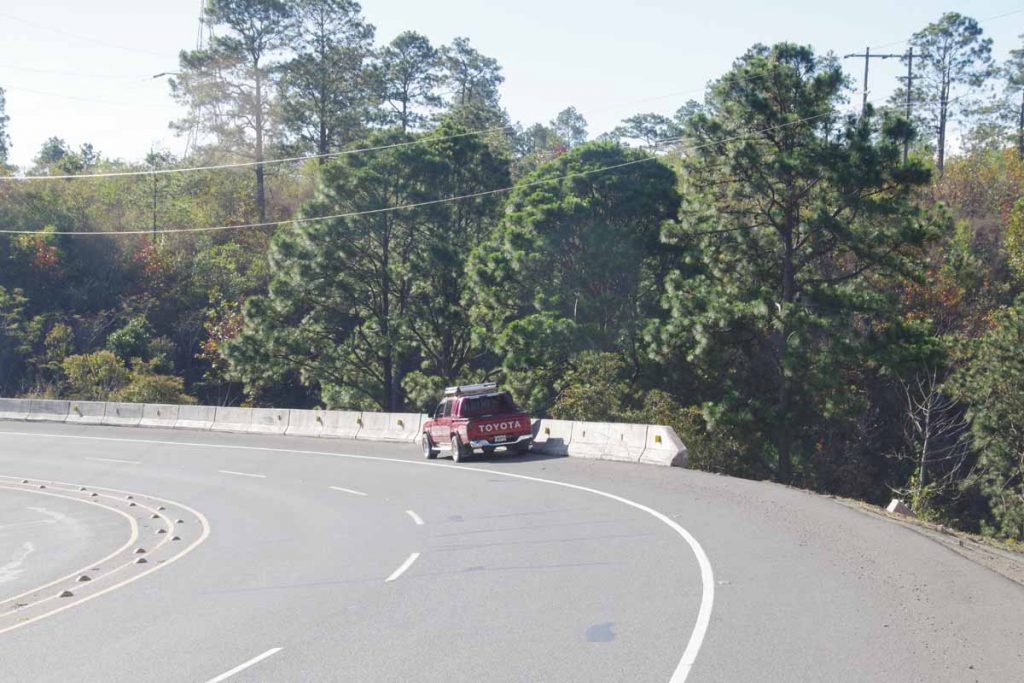 A little ways ahead, I saw this truck pulled over to side of the highway. Two guys got out and started throwing trash bags from the bed over the side of a small ravine. Now we know how all that trash appears there. 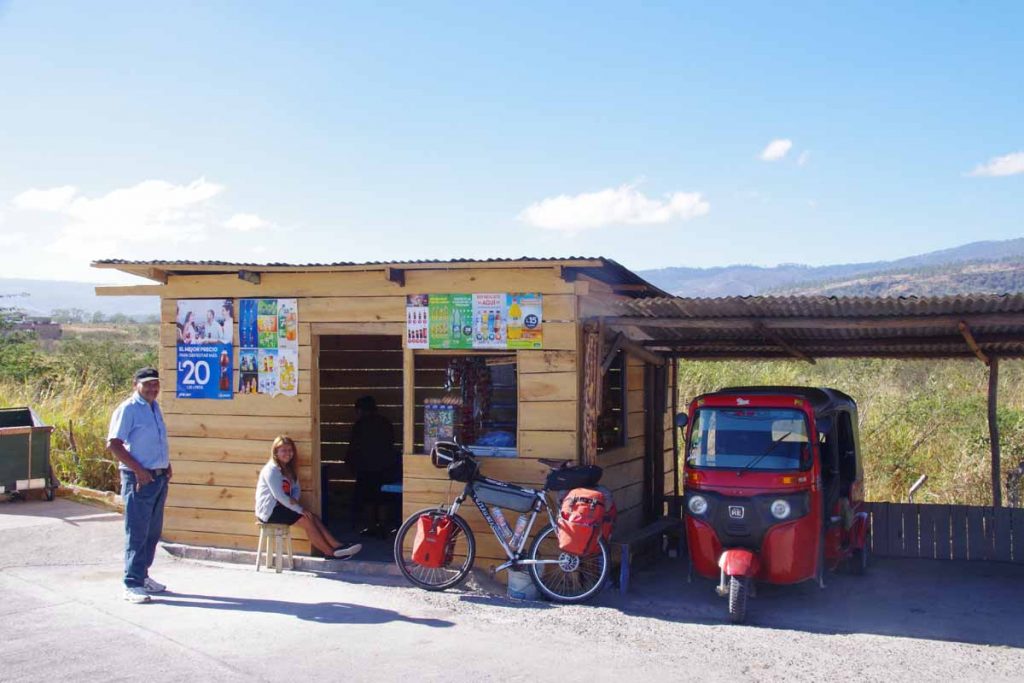 A little past the bottom, I waited at this point. There was a small store to get a drink. Buses would pull over every 10-15 minutes and people would get on or off. Local destination traffic was handled by these small auto-taxis. Overall a fairly busy junction.

After David arrived, we started our climb for the day. Around 500m on a good four lane highway shoulder. We passed a large penitentiary on the way up and stopped once at a comedor for a snack. 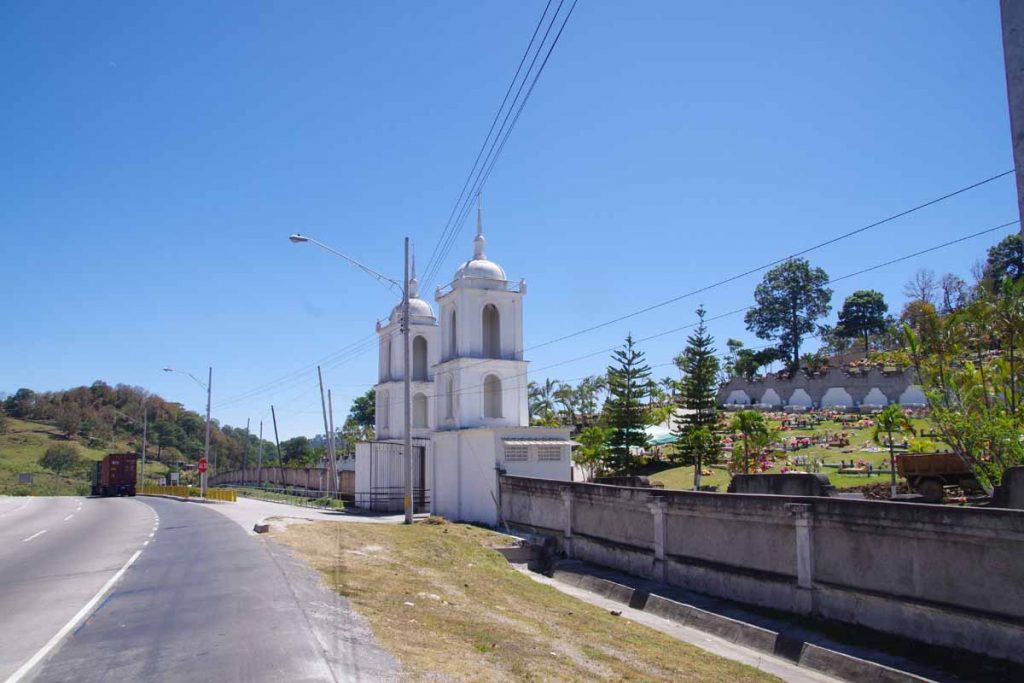 There was a nice church and cemetary near the top. Turned out there was a short downhill and then uphill again before the final descent. We could see Tegucigalpa (Tegus) down in the bottom.

The road into Tegus had good and bad. On the bad side, it mostly narrowed to two lanes without much shoulder. On the good side, there was less traffic so often a chance to ride in the gaps between cars and trucks. The steep hills did make it a bit more challenging. 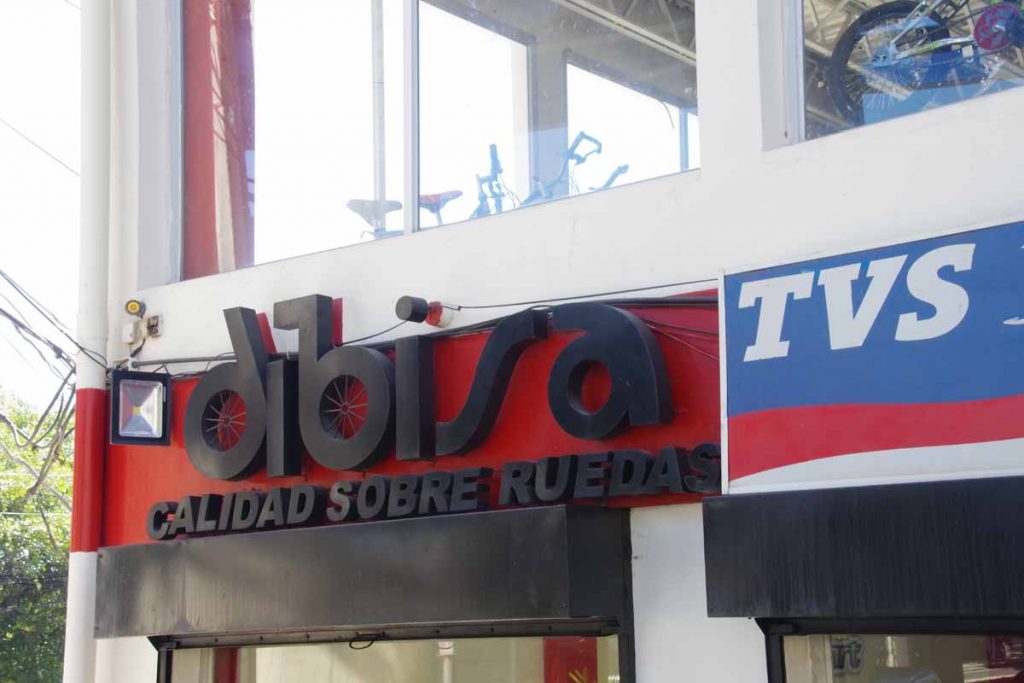 We stopped at a bike shop on the way in. I had been tightening my brake pads as they had worn on previous hills, so wanted a good check to see if it was time to replace. It was time to replace them as they had mostly worn down in our interval from Guatemala City. A lot of steeper hills and me using the brakes a fair amount – but nice to get them back again.

After this we cycled a few remaining hills and found a hotel recommended in Lonely Planet. Nice end to a day and not too late overall.