Over the canal and into the big city. My training ride to prepare for South America is complete!

Overall, that makes this my second longest cross-continent ride. The complete list:

I have a week in Panama City before flying to Colorado for ~2 weeks. Will use this time to figure out what worked, what didn’t and prepare for the next part of the ride: across South America. 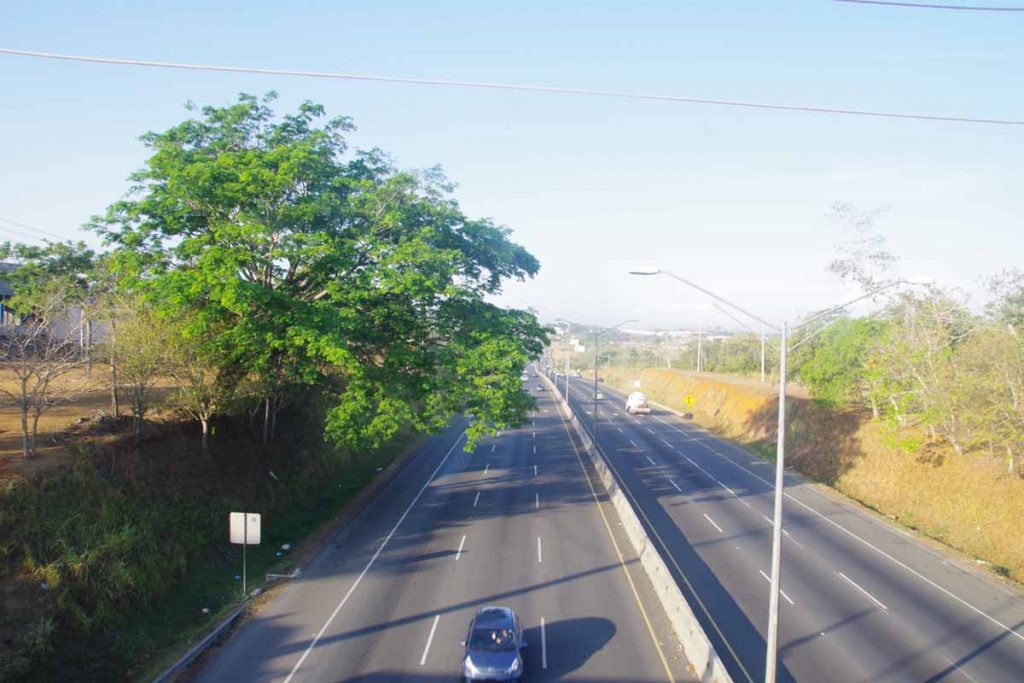 The ride today was busy and required concentration – though parts I thought would be hectic/difficult turned out fine and other parts were a bit more iffy than I expected.

First 3km were through town before I rejoined the major #4 bypass of the Pan American. This road was three lanes with reasonable shoulder and high speed traffic. As before, the shoulder sometimes went away to squeeze past a quick bridge. However, what made it more hectic than expected were all the trucks and other vehicles that decided to stop in the right shoulder. First it was one or two, but between the 11km and 13km mark it was almost continuously trucks parked stopped in the right shoulder. This meant that I was now riding past them in rightmost of the three travel lanes. I’d check my mirror and traffic gave me room but still took some care to keep watching.

Not quite sure why, but my guess was that there was some reason (rules or traffic) that these trucks weren’t allowed further into the city and hence they parked on shoulder of the road until they could proceed. I had started ~7am so early but not as early as other times and I also noticed right around 8am I started having many trucks, particularly dump trucks, all the sudden decide to pass. 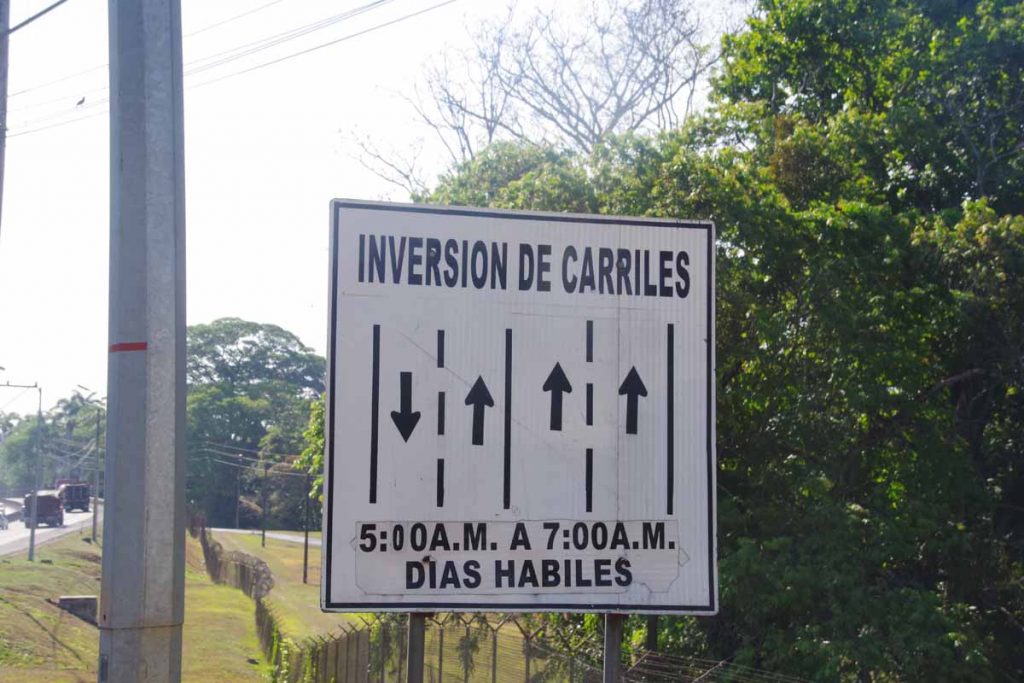 Later I saw signs like these that suggested some of the lanes were occasionally reversed earlier and hence my theory of why these trucks decided to park. 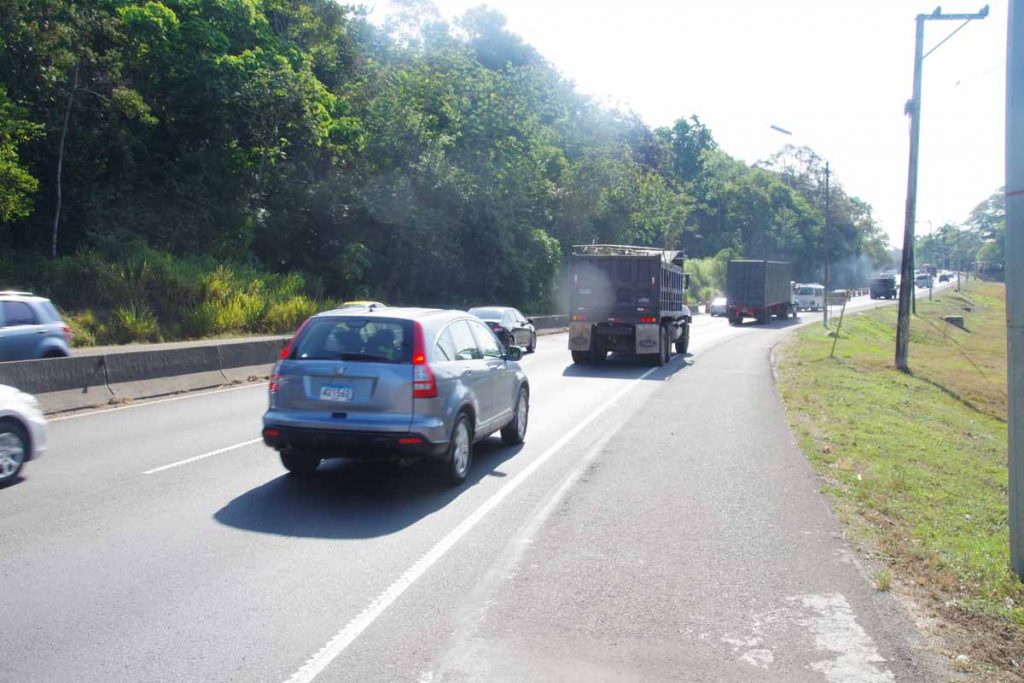 At 16km, was the exit to #1 the direct route into Panama City. Much of the next 5km was completely stop and go traffic. Usually the shoulder was OK and I could ride off in my private shoulder (except for the few “cheaters” who wanted to also ride there). Occasionally when the shoulder went missing or was blocked I’d be back with the other vehicles. However, speeds were never very fast so this was all fine. 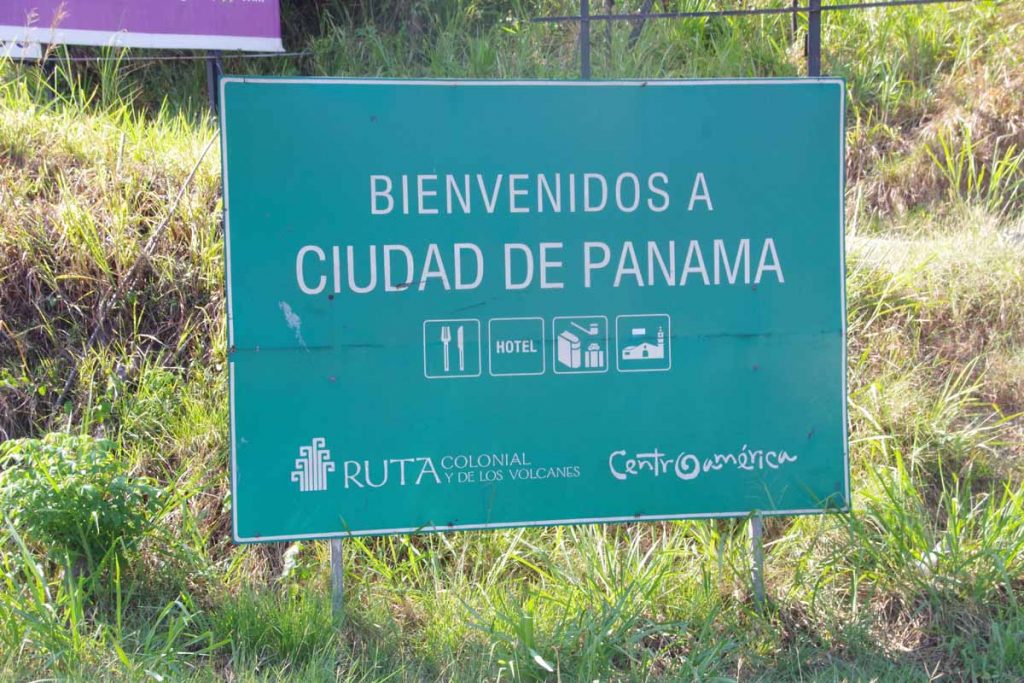 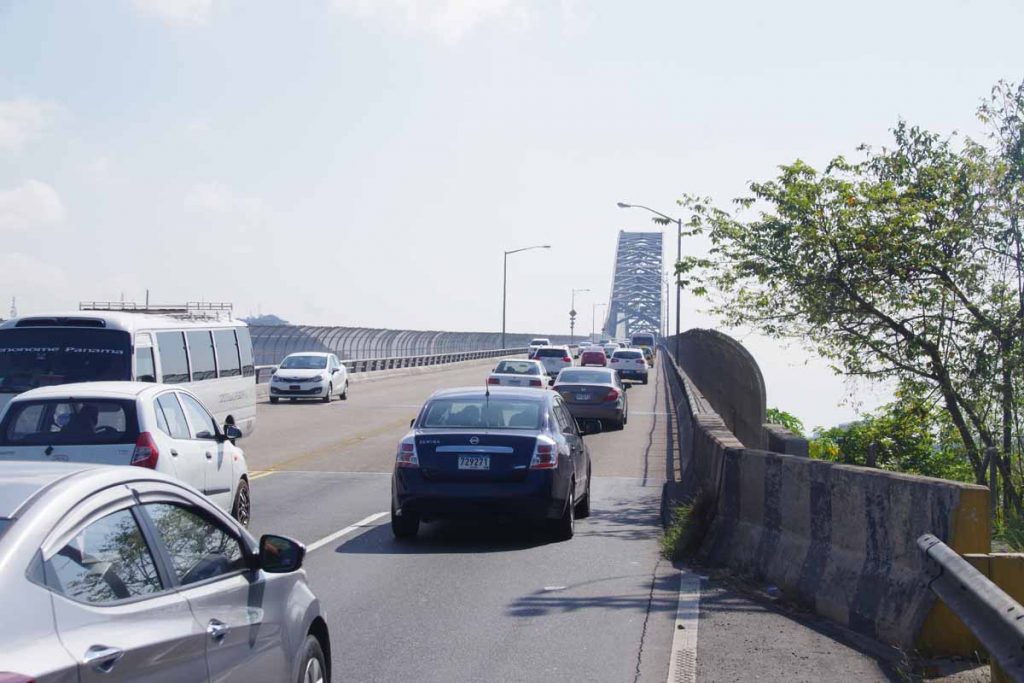 Just thereafter was entrance to “Bridge of the Americas” which crossed over the Panama Canal.

From reading other blogs I anticipated this would be the most hectic part of the ride. Two narrow lanes. A pedestrian walkway that was unusable and a high narrow bridge. Several other blogs outlined three choices:

However, my ride turned out easier than anticipated. There was still a fair amount of traffic so speeds weren’t high. Pretty much everyone gave me enough room so never felt particularly vulnerable. I did however, decide not to stop or get any photos from the bridge of the canal.

In contrast, I found riding past those stopped trucks to be a bigger deal. 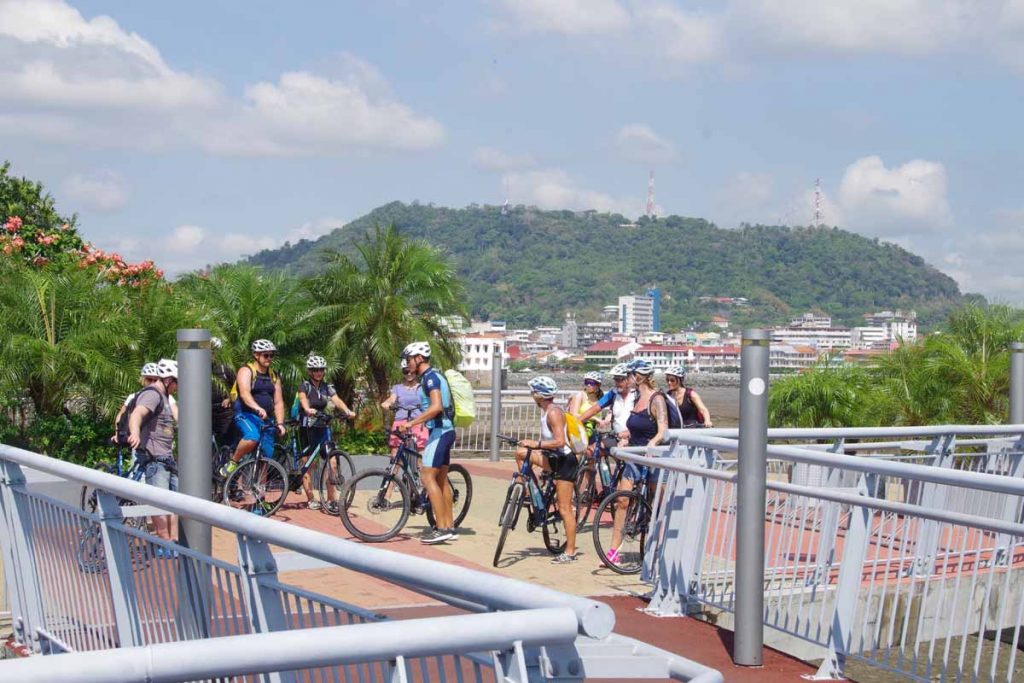 Hooray, I was now in the city! I found some quieter roads and even a bike path that went out along the water.

Here was a set of tourists out for an organized bike ride. I had several such groups coming the other direction and appreciated having my bike bell to give warning (it would have been sad to have ridden all way to Panama City and then get involved in a bike path accident with a tourist). 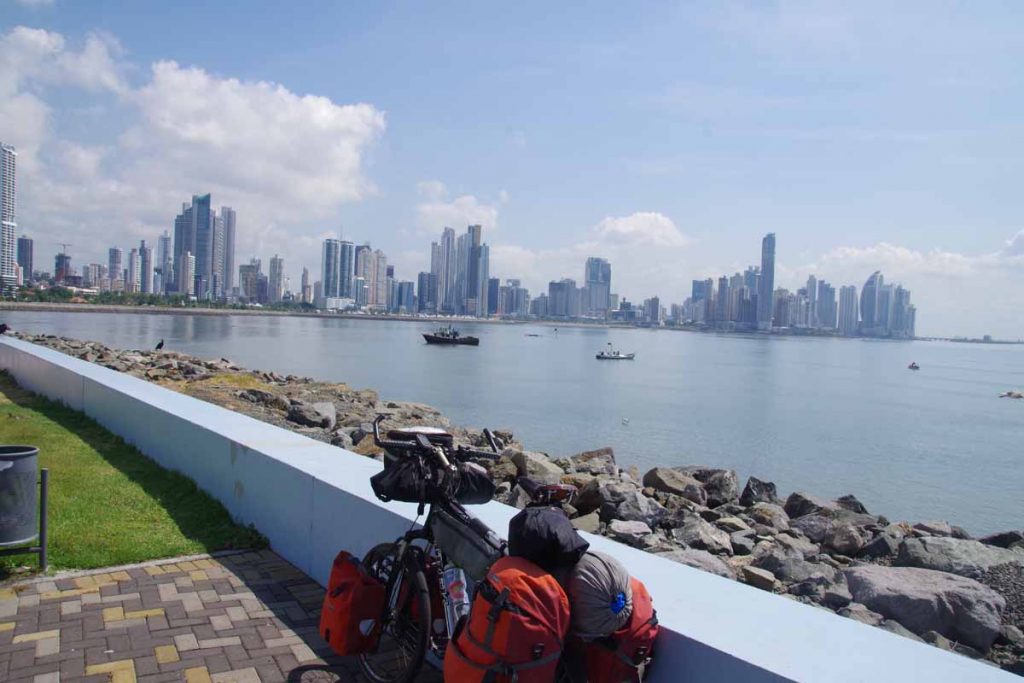 I stopped and got an obligatory photo of bike with Panama City skyline in background. 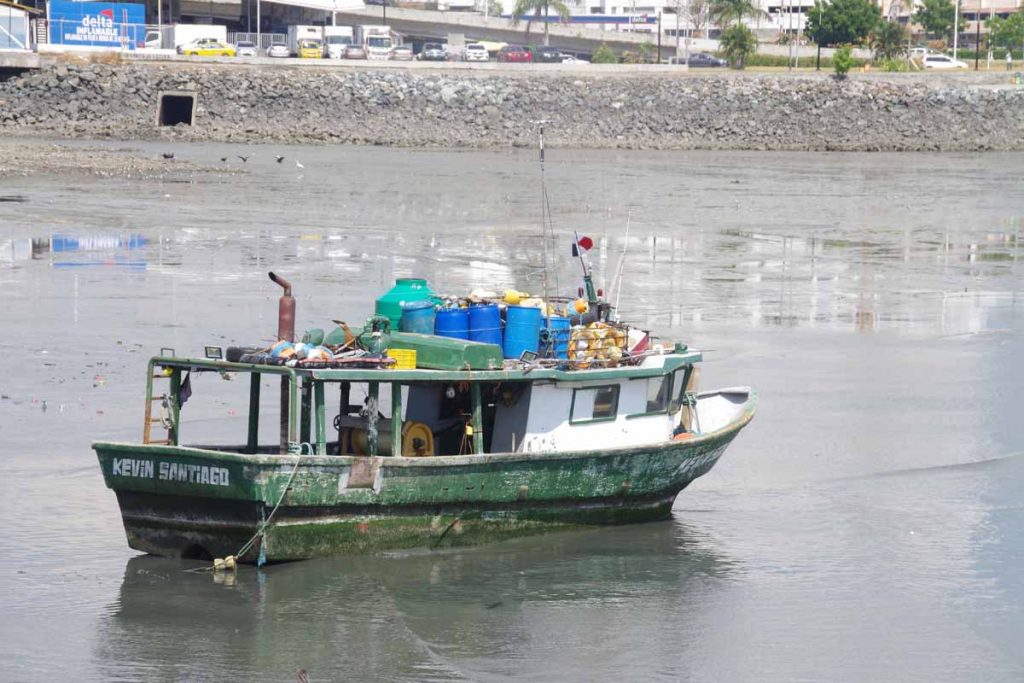 After that found my way to an inexpensive hotel I had reserved for one night on Expedia. Hotel was fine, so I’ve reserved for rest of the week as well. I’ve now and a not very long “must do” list:

Not particularly ambitious and already got the first one done on the list. This afternoon I figured out the Metro system and rode out to Albrook Mall. Found a reasonable duffel bag there. Tomorrow will go in search of bike shops…

For now, happy to have arrived in Panama City.

p.s. Some may wonder why I’m flying to Colombia rather than bicycling there? There is a region between Panama and Colombia known as the Darien Gap where there is no road. this article has some good descriptions and photos of the Darien Gap. Hence, pretty much all Pan American cyclists get around the Darien Gap. Most popular ways are either to take a boat from coast of Panama to Colombia/Ecuador or to fly from Panama City. Since I’m flying anyways, figure I can take a stop over in Colorado to get bike serviced, replace worn parts, file my taxes and otherwise prepare for the South American portion of the journey.